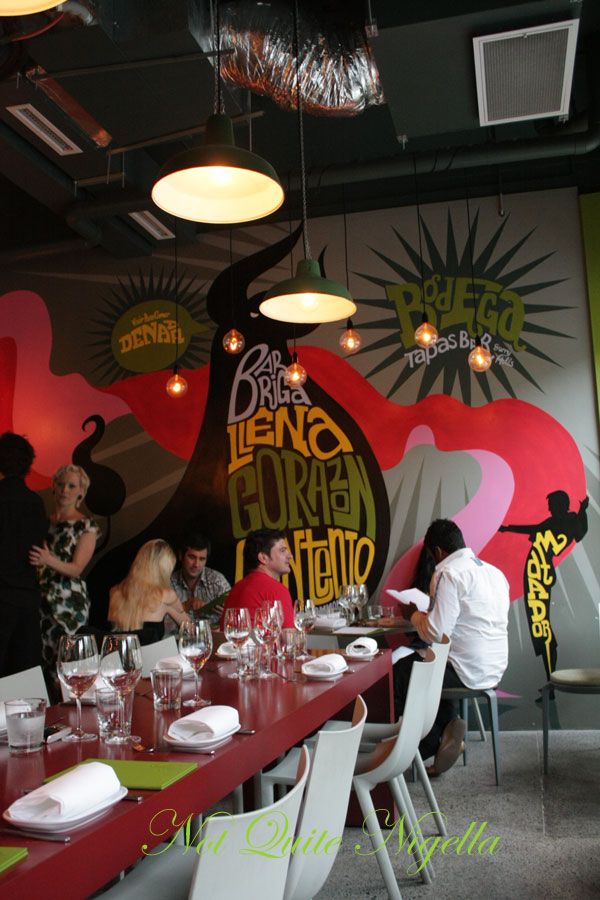 The one restaurant, most recommended to me by food loving friends most recently has been Bodega. One of those places that will not take bookings (oh how they make my dining life difficult!), it's a Tapas place (yes another one for Sydney) that has a lot of buzz. For as it is 5.55pm this Saturday night there are already two patrons outside that have been waiting for 10 minutes. It's only 5 minutes before they they are technically open so I poke my head in only to be told politely and smilingly that they open at 6pm. Hmm strict little buggers aren't they! 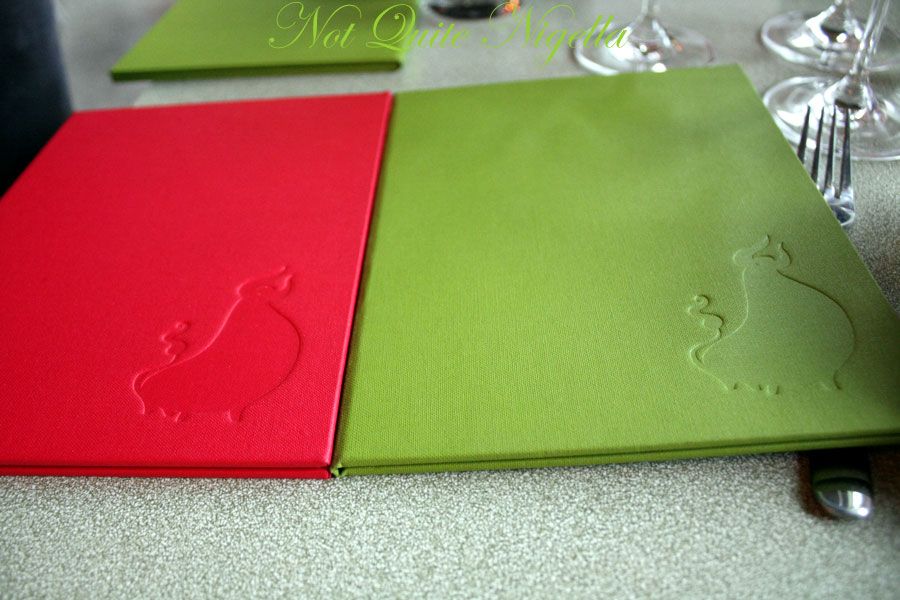 So we join the two other waiting diners and within seconds are joined soon by a crowd of diners, eager to snag a table at Bodega. There are even the people from Time Out who arrive in a Time Out London cab and tshirts. It's almost 6pm and they've already got a crowd baying to get in. Not exactly baying actually, the crowd is polite, and when 6pm hits and the staff comes out, everyone gets into a queue according to how long people have waited and we are all shown to our tables. 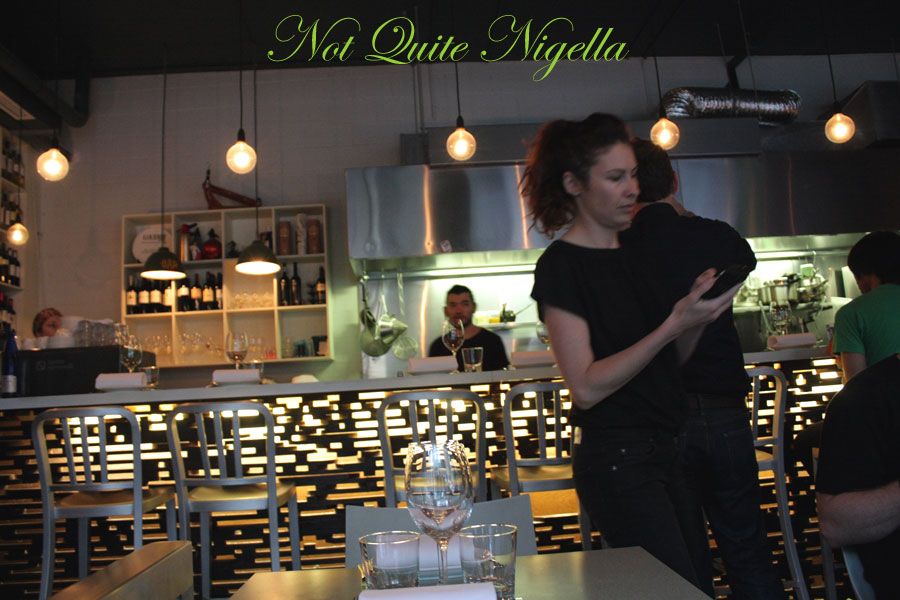 We're shown to a table in the small restaurant with a colourful mural on one wall and a light lined bar with barstool seating where patrons can have an eagle eyed view of the chefs in action. We order from the menu after consulting our friendly waitress about the signature dishes and for the 3 of us, she recommends getting 5 dishes. 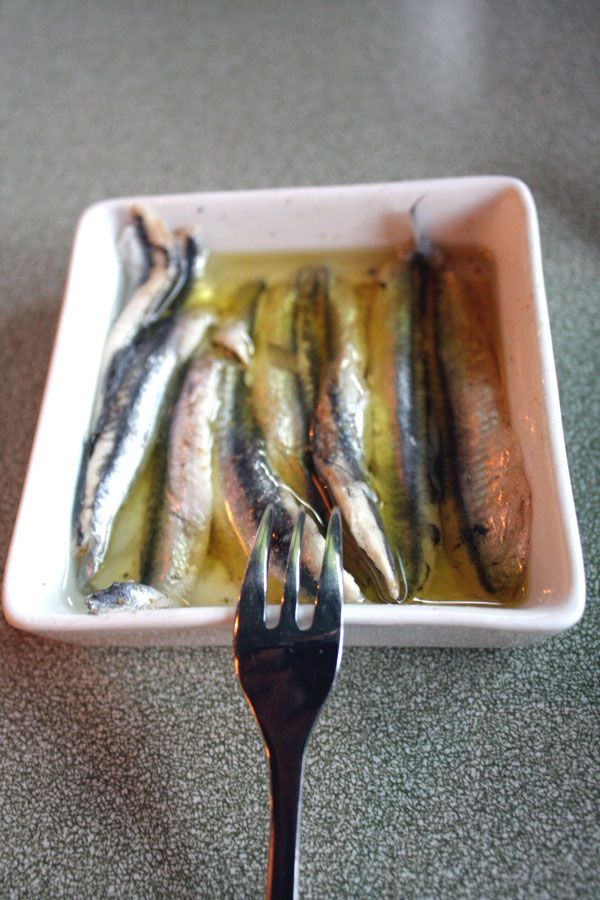 Before we know it the first plate has arrived, the white anchovies. They're plump, creamy and tangy, less hairy than their brown cousins and delicious. The bread isn't particularly remarkable and I don't eat more than a couple of mouthfuls. 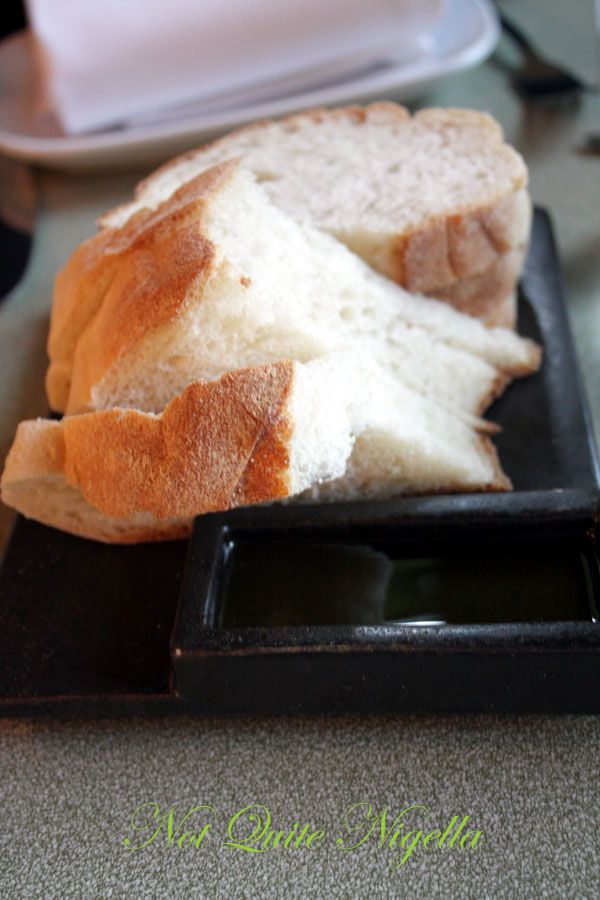 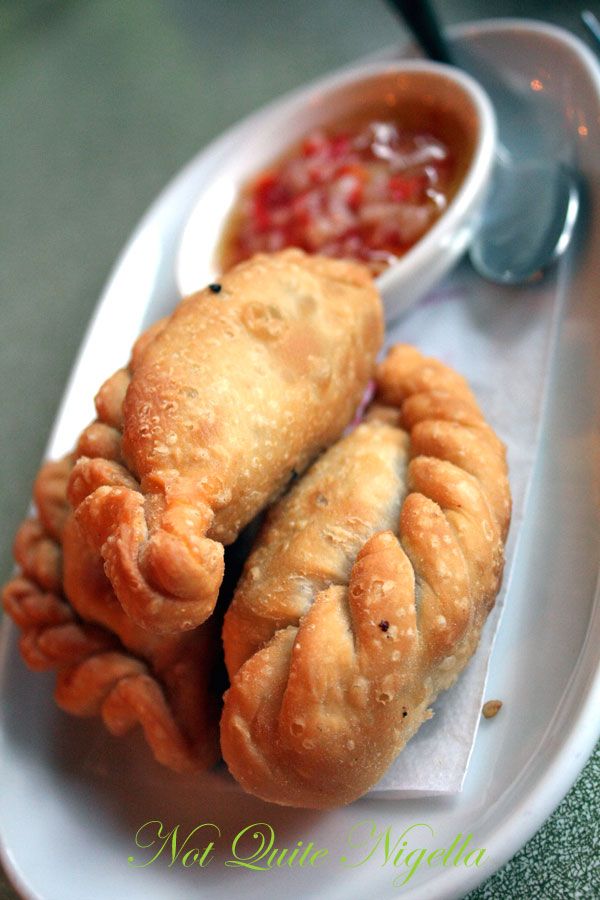 Our Argentinean style beef empanadas with salsa criolla arrives next and it fresh and hot smell entices us to transport one of these babies onto our plate pronto and dissect. Inside there are olives, like an empanada should have. They're smaller than the ones I've eaten at La Paula, more of a curry puff size but they're absolutely delicious. My sister goes on about Argentinian beef and if this is an indication, I want to try more. The salsa criolla is a perfect piquant accompaniment to it with onion, tomato and capsicum and a strong red wine vinegar flavour . 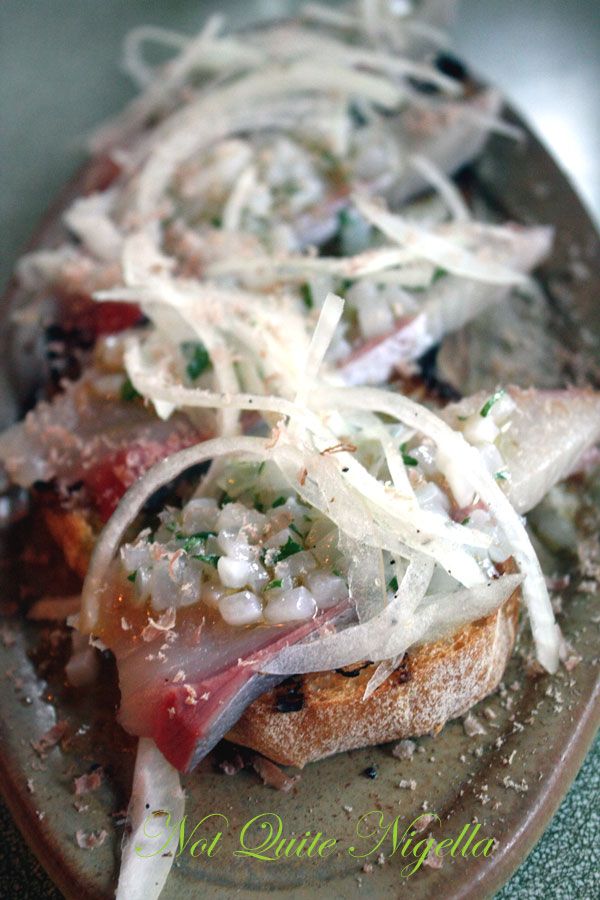 The Fish fingers: sashimi Kingfish on garlic toast with thinly sliced celeriac, is a dish we were intrigued by because of its name. We certainly didn't expect fish fingers of the normal frozen variety, especially since our waitress recommended it, and what we get is four deliciously oil laden garlic bread fingers overlayed with kingfish sashimi. There's a little too much diced raw onion on top for me but I do love the sashimi and crunchy, garlicky oily bread fingers. Gina finds it too salted for her so I dutifully eat her remaining slice (poor Teena can't partake as she is pregnant). 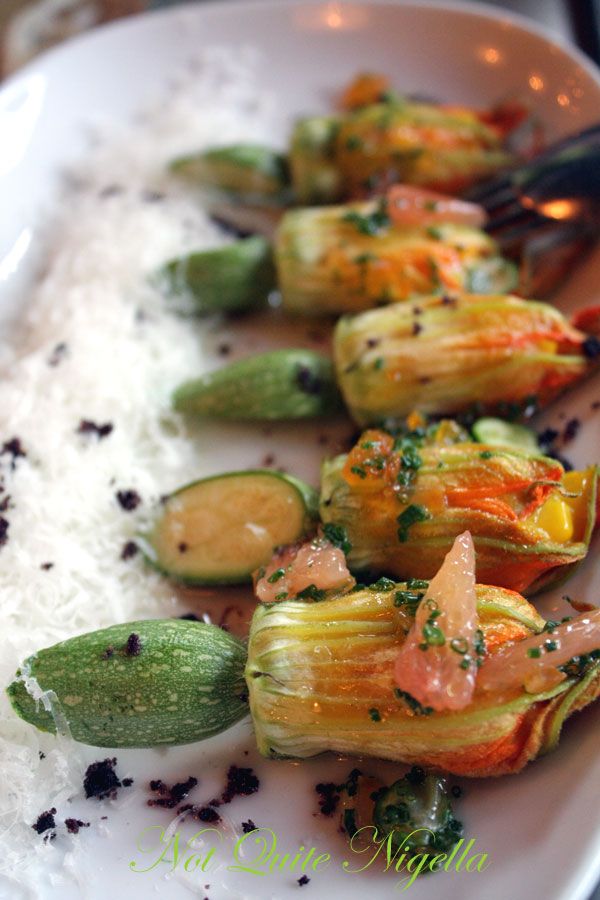 The colourful Zucchini flowers are one of my favourite ingredients when stuffed, battered and deep fried. In this case they're not and the corn paella filling which is actually sauteed corn (no paella rice) is interesting although I can taste a vague bitter taste in it. I don't hate it but as I eschew bitter tastes (something my father in law, a naturopath says isn't good for me) I leave my second one for Teena or Gina. 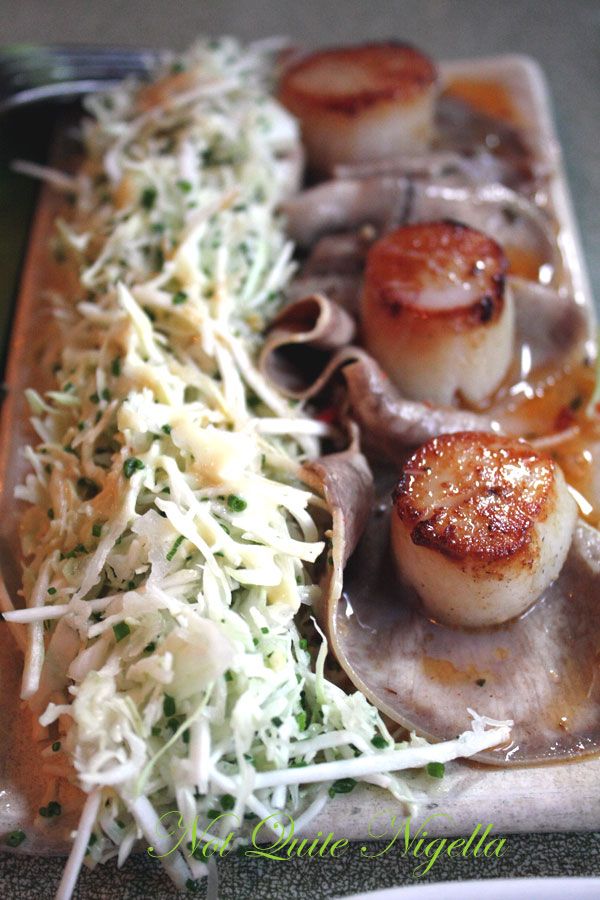 The Seared scallops with pickled Wagyu tongue,cabbage & celeriac salad appears next, three fat thick scallops seared on one side only and laid on top of thinly shaved Wagyu tongue. To the side is the cabbage and celeriac salad dressed with a light mayonnaise emulsion. The three together are delicious, the Wagyu tongue just lovely and delicate combined with the texture of the fat juicy scallops and tendrils of salad. 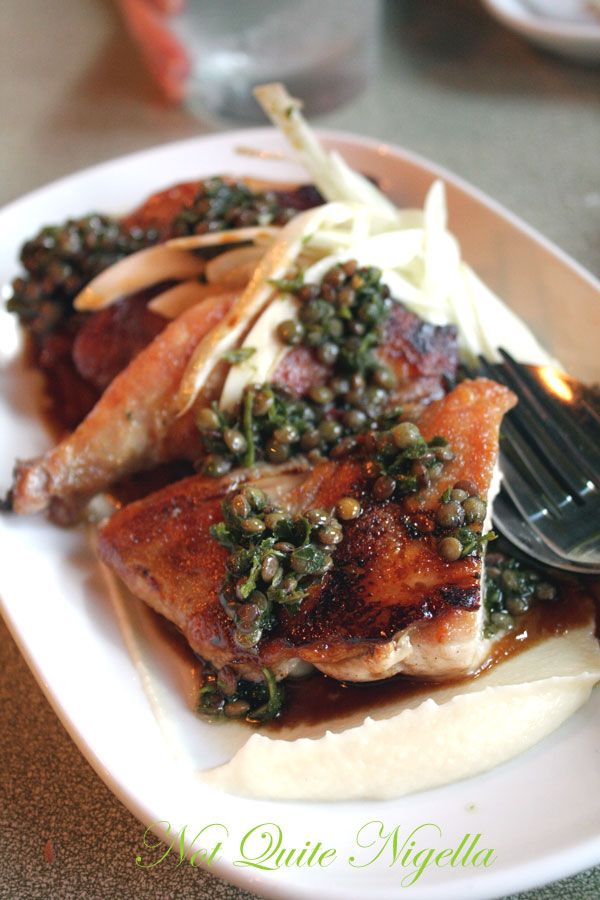 Our last dish, the Spring Chicken with green lentils is one that we ordered both on the recommendation of the waitress and the delicious smell emanating from the kitchen. The chicken is tender and very juicy and comes with a slight swirl of creamy potato puree.

The dessert menu looks enticing, particularly the Banana Split: Cream flan, dulce de leche ice cream, ginger biscuit and banana but as we're going to a Sugar Hit afterwards we beg off. Although thinking back on it, I'm sure if I had put in a bit of effort I could have had two. Regrets regrets... 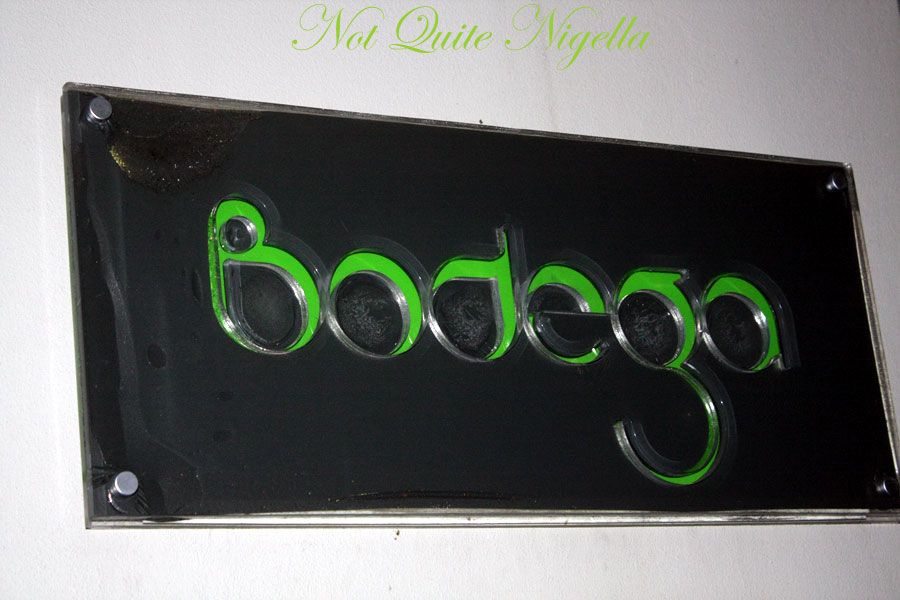 No Reservations, all members of a party must be present before being seated 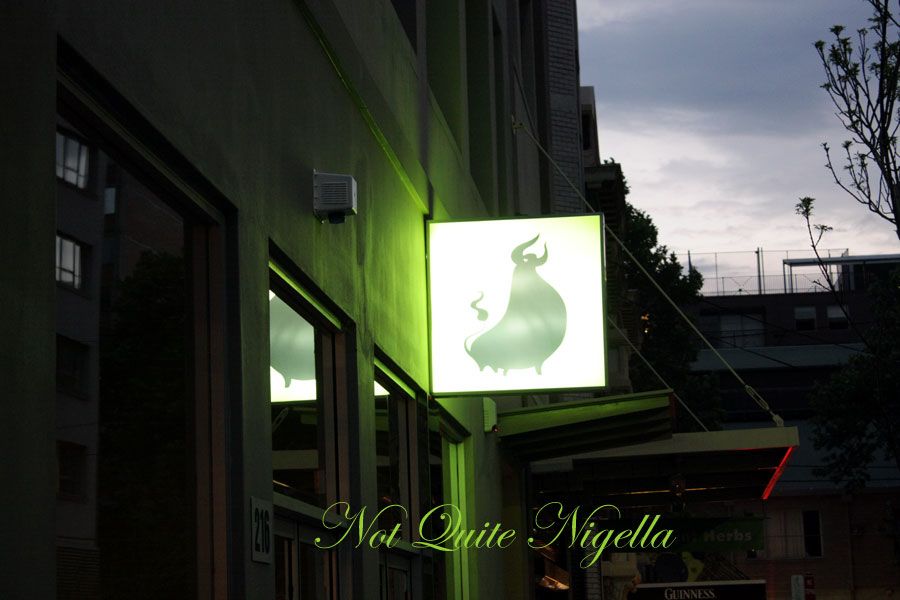