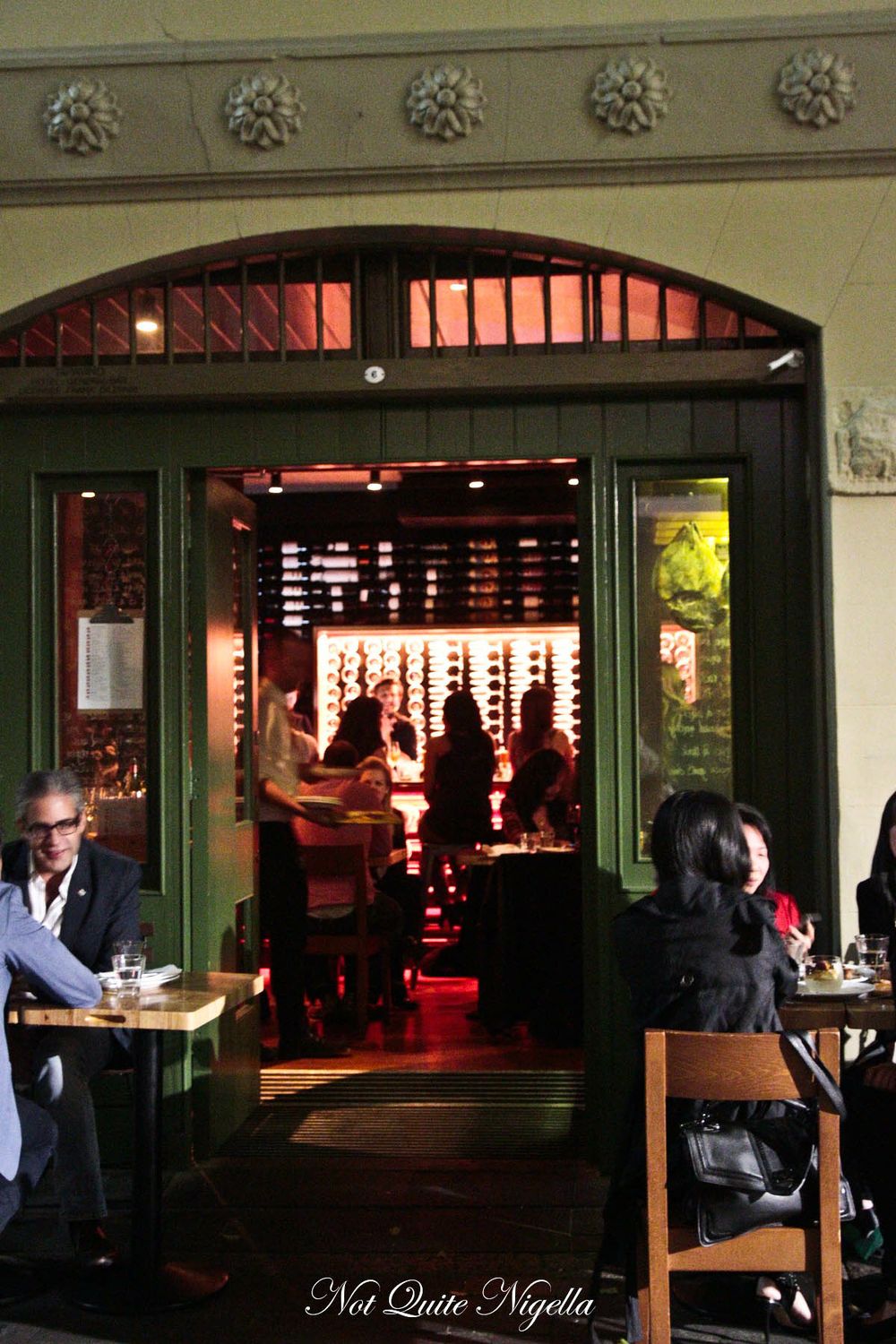 "In the nineties, I had an erotic dream about Kim Beazley..." Marcia says to Natasha and I one evening. I almost spurt out my drink and then try to scrub the visual from my mind. It's times like this when I'm glad that we're sitting outside, the busy Sydney Friday night around us muffling our somewhat sordid and not-for-public-consumption conversation. We're at Tapavino in Circular Quay, in Bulletin Place, a snug little laneway that to be honest I never knew existed that is pitched right next to a hotel. Inside is a red hued wine bar with a shiny display of glasses on the back wall but we're sitting al fresco in this slightly chilly but still lovely Friday evening. 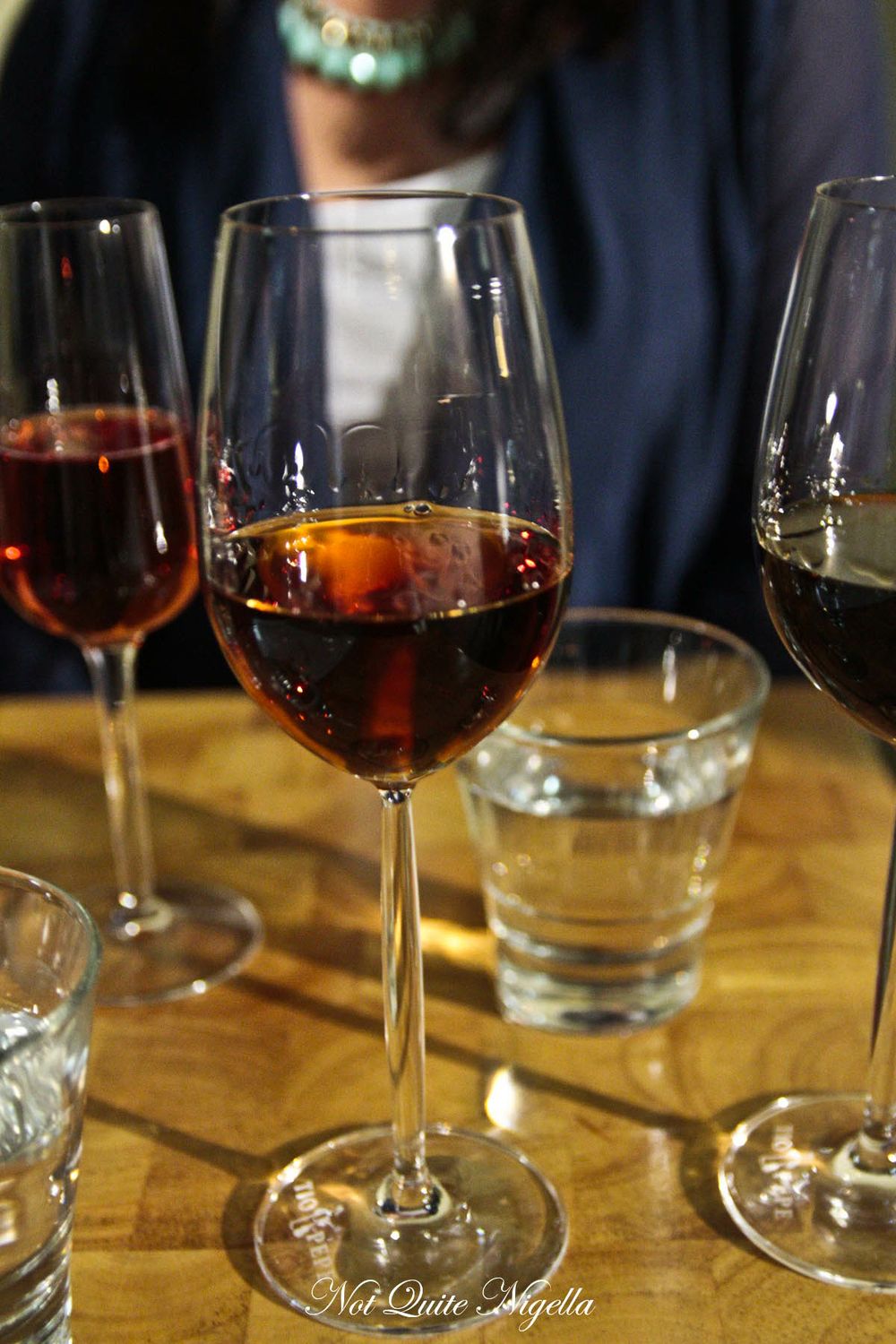 Tapavino is said to be Australia's first dedicated Jerez or Sherry bar with 54 sherries on the menu with 46 available by the glass. Patrons can tell them what sort of wine they usually enjoy and they will match them to a suitable sherry. They also specialise in Spanish wines by the glass or three carafe sizes or bottles. I do love a drop of Pedro Ximenez so I flick through to the sherry pages. On the waiter's recommendation I try a Cristina Oloroso Abocado which is medium dry scented sherry although truth be told I should have really stuck with the Sánchez Romate Pedro Ximenez which was sublime with an intense raisin flavour, incredible legs and that went down as smooth as silk. 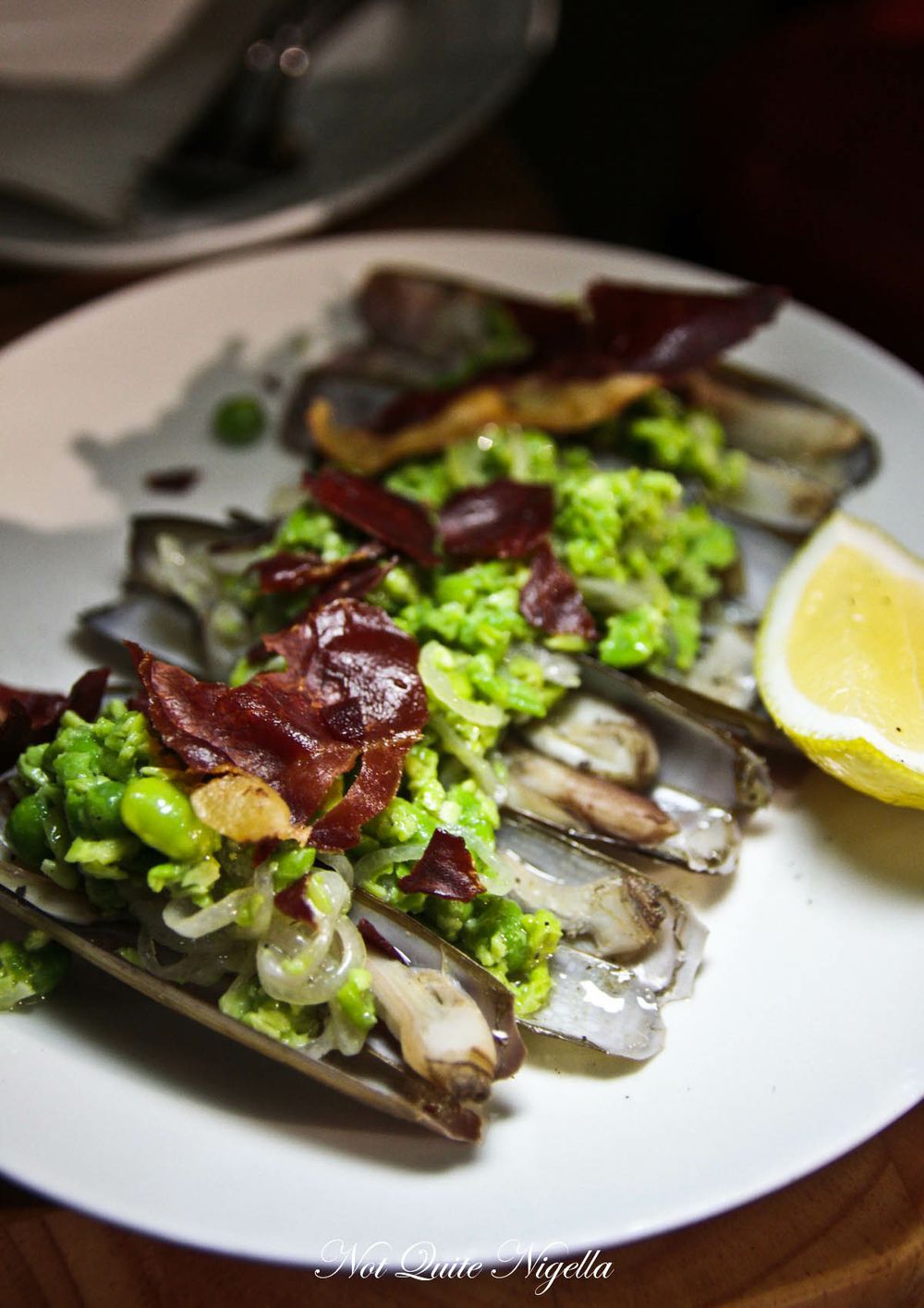 We're on a tiny table for the three of us although it seems that we're lucky to have this table given the shuffling that's taking place around us for other tables. The menu is quite extensive and holds an intriguing and hard to choose list of menu items. Between the three of us, we decide on a list of four items and then thought that we should compare them to our friendly waiter's recommendation. It turns out that there were none in common so we went with our own choices. Our first was the razor clam dish served as six razor clams topped with verdant mashed peas and broadbeans, eschallots and thin, crispy pieces of jamon. They were full of fresh flavours. 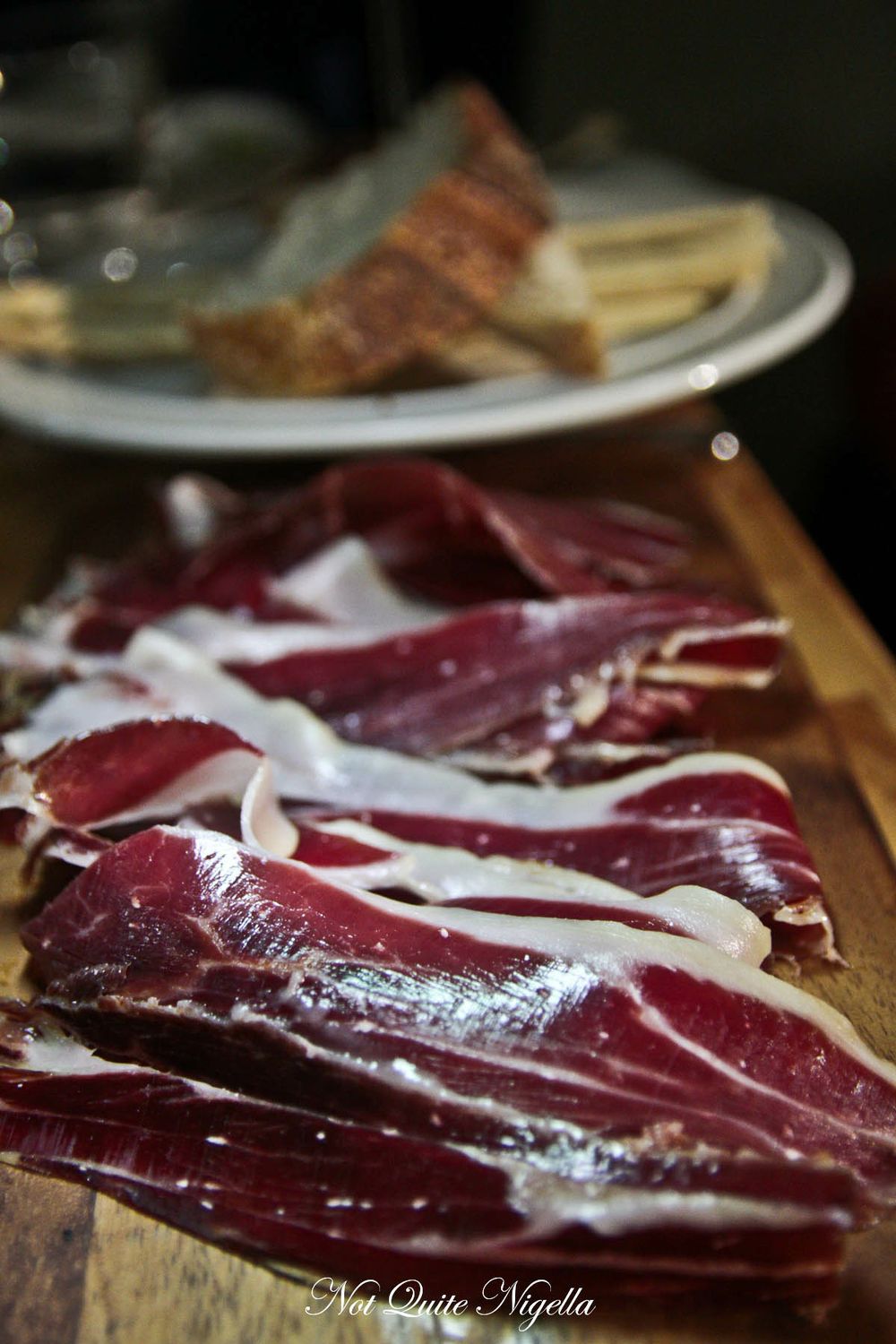 There's a jamon menu with eight different plates of jamon, mostly jamon serrano but as soon as I see Pata Negra, I can see nothing else on the list. Oh my kingdom for Pata Negra or Jamon Iberico, that incredible glossy jamon made from pigs that feast on black acorns. Yes, it's expensive but it's quality over quantity and the intense flavour and melt in the mouth texture is hard to find in other jamon. It is served here with fresh crusty bread and breadsticks. 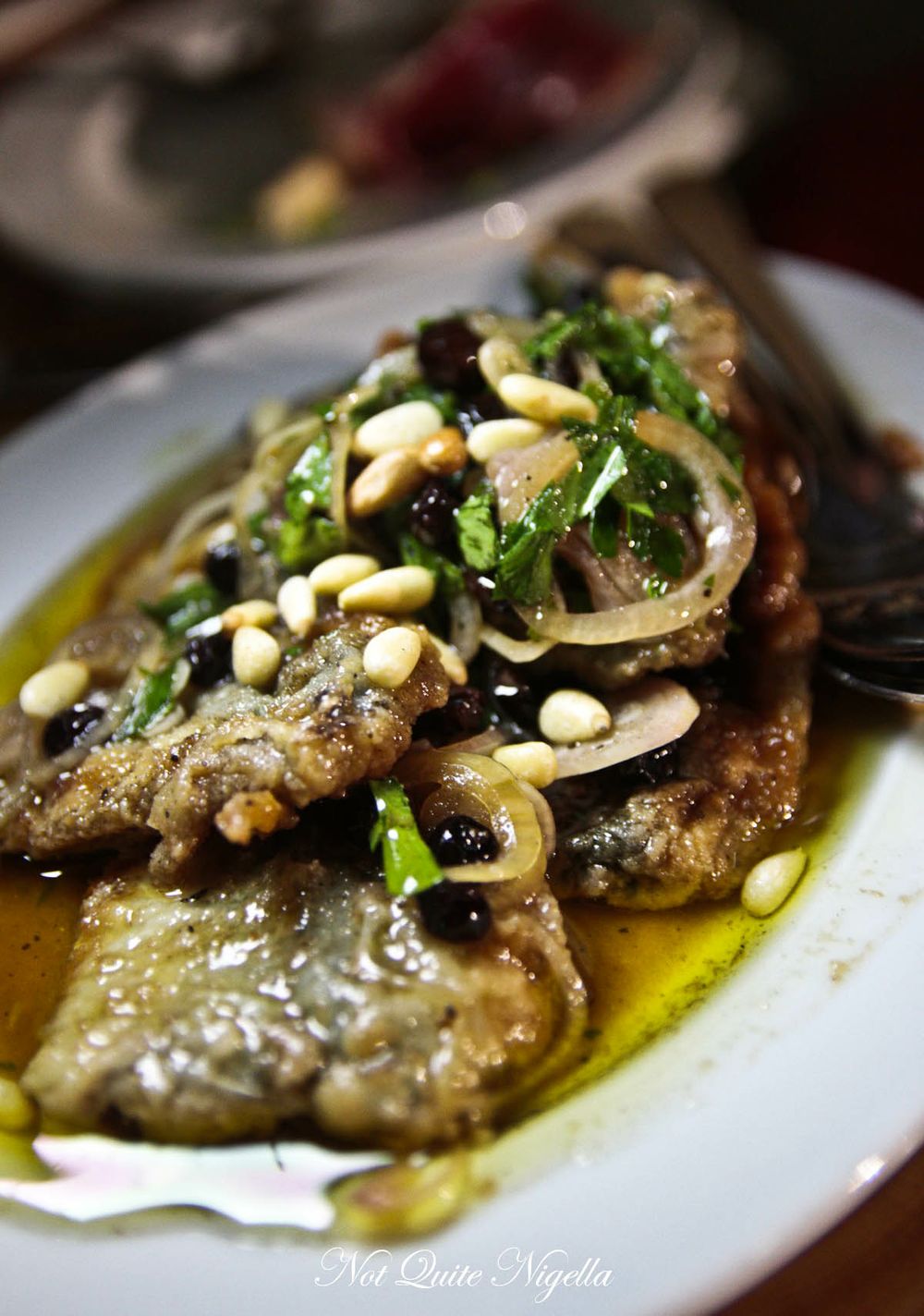 I am not a huge fan of tinned sardines but fresh ones are divine. Surprisingly, this is served cold and it's a dish with a generous serve of sardine fillets with pine nuts, currants and plenty of olive oil. It's a fantastic dish, the sardines singing with their distinct flavour and texture and the olive oil and nuts and currants bring out the best in it. It is everyone's favourite dish of the night. 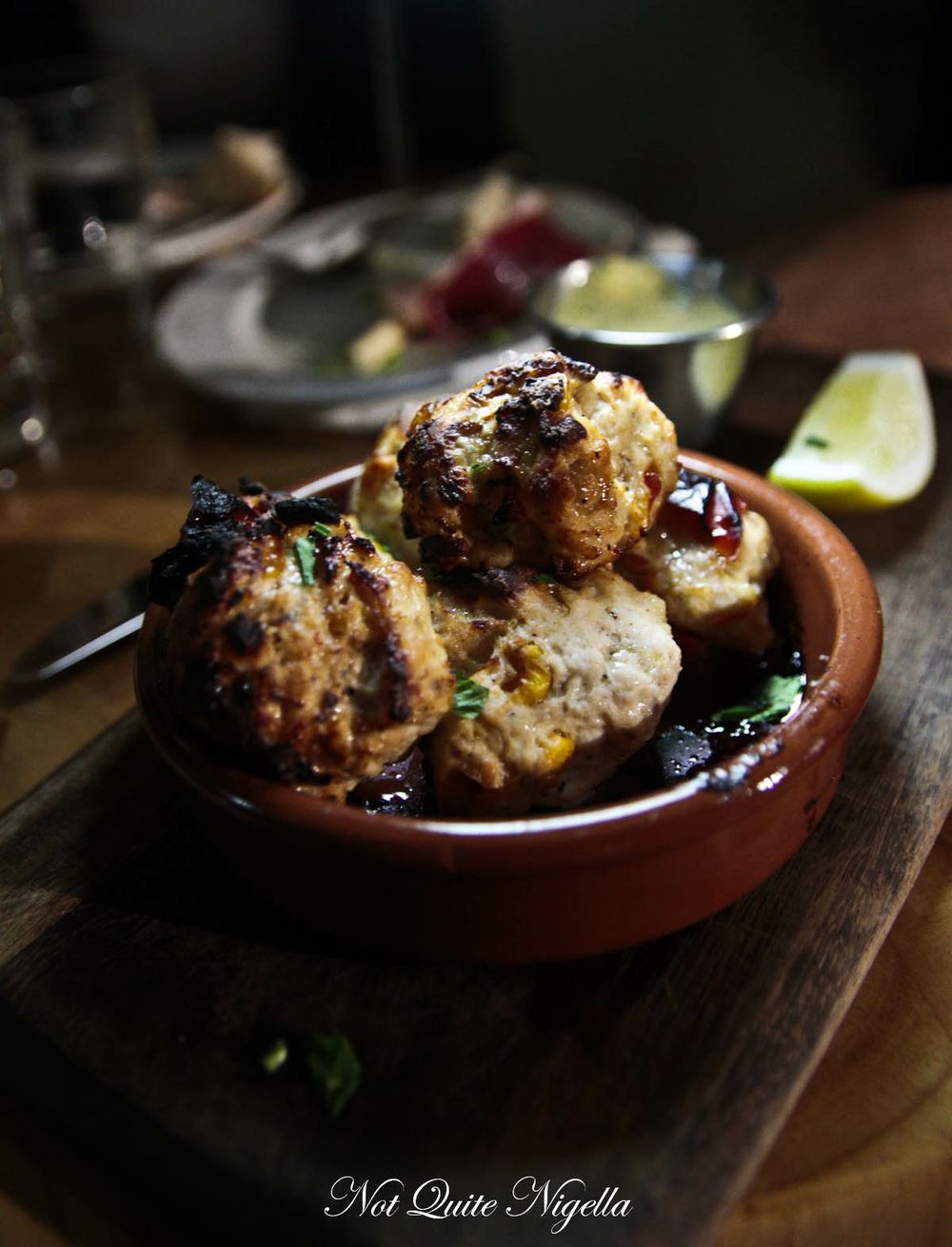 The meatballs are soft with chunks of red capsicum and corn although they're really best with the aromatic garlicky aioli. 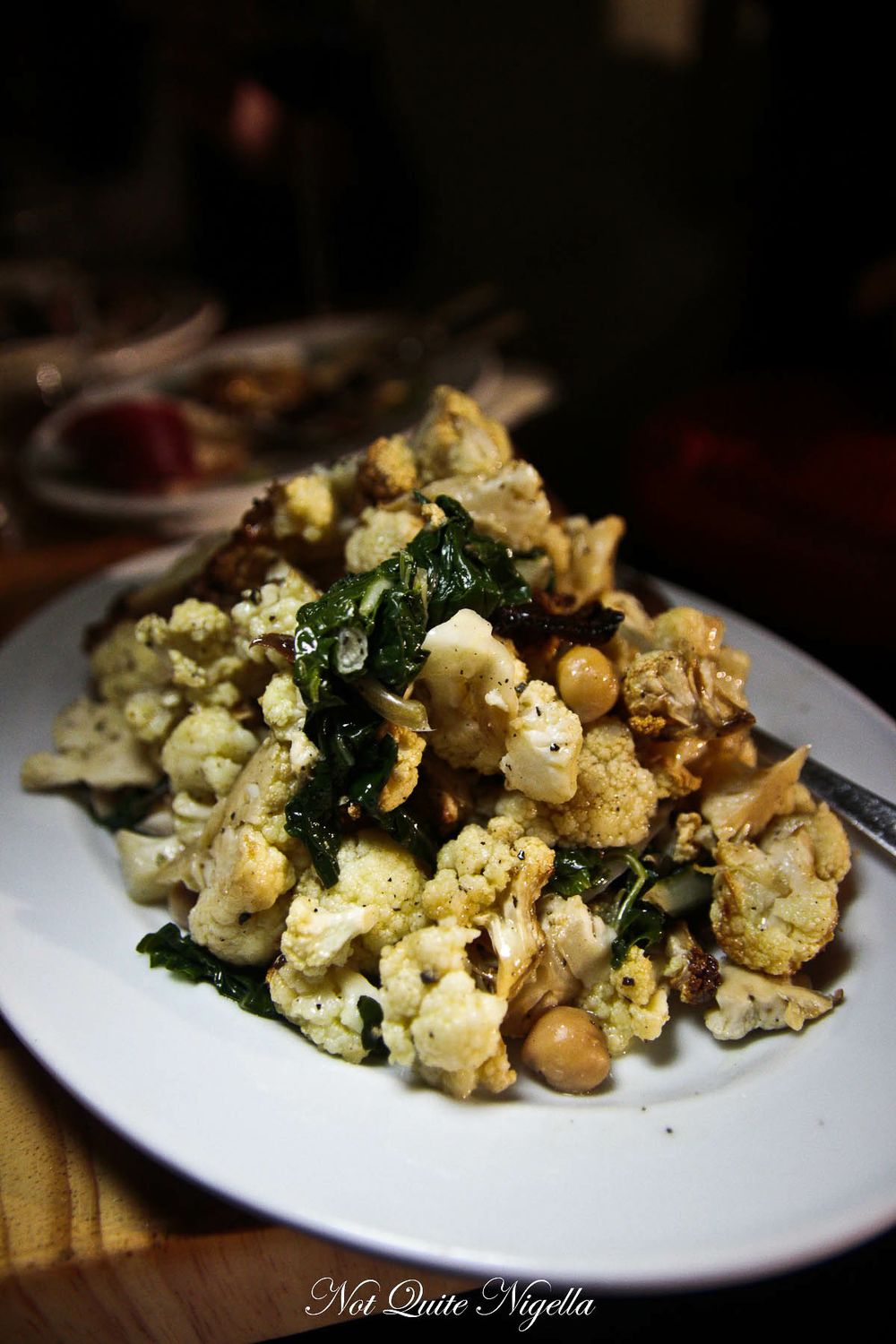 This was another dish that was served quite cold and we didn't love this as much as we thought that we would. There wasn't a lot of flavour to the cauliflower which seemed to be simply baked with chickpeas, silverbeet and lemon.  When our waiter saw that we had barely touched it, he inquired about it and offered to take it off the bill which was a really nice gesture. 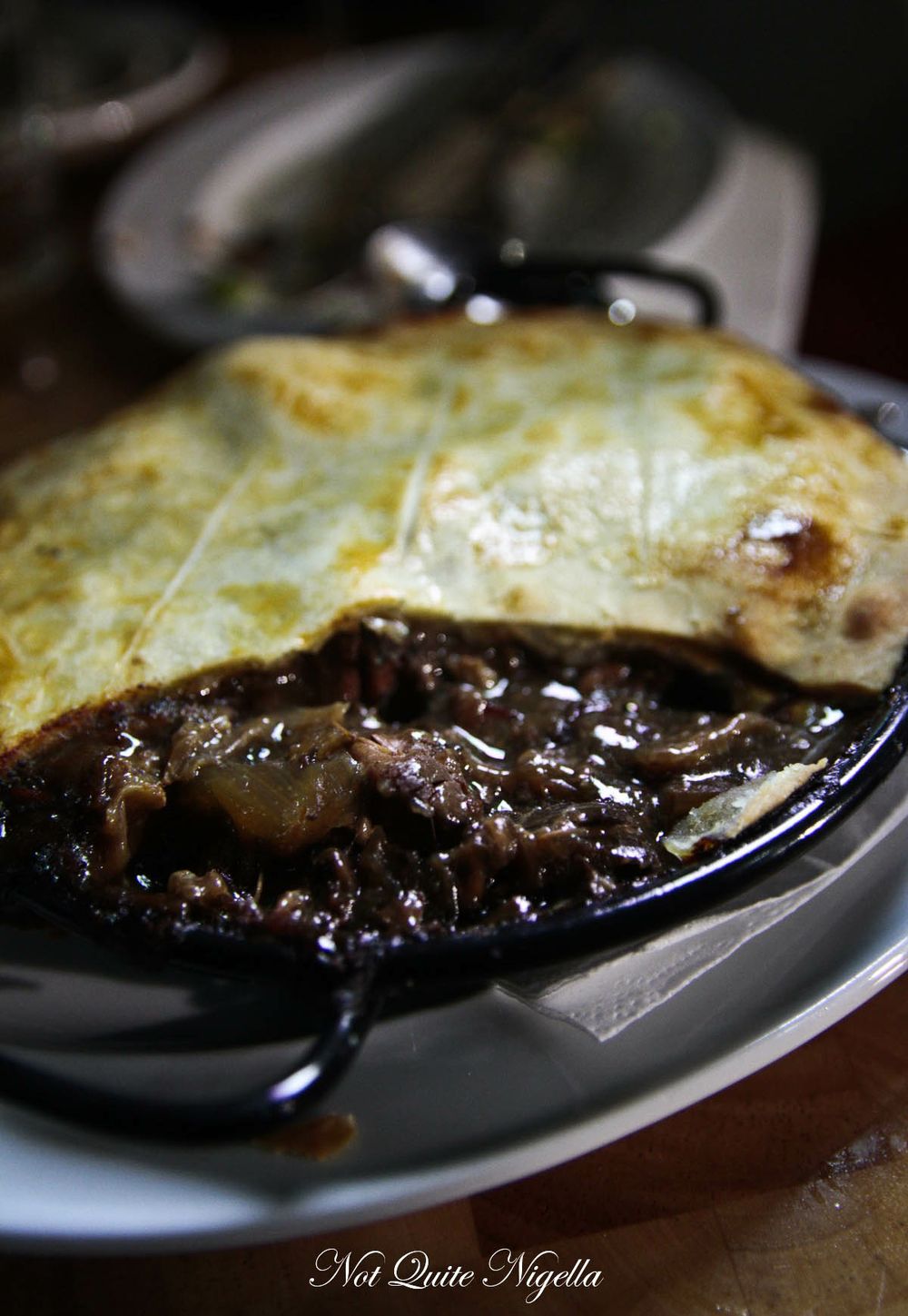 The girls were ready to move onto dessert but I wanted just one more item from the savoury menu and this was something that Marcia chose because it sounded unusual. It was a steak, mushroom, sherry, jamon and grape hot pot which sounds sort of Chinese but it's really a pan pie with a layer of short, thin pastry on top. The meat itself is in small chunks, quite dry in texture with small pieces of mushroom, jamon and flavoured with sherry. The item that intrigued us the most was the grape and I was the only one that got a mouthful of grape in mine so as to how to grapes taste in pies? Well it's rather good although I wonder what it would have been like with more grapes. 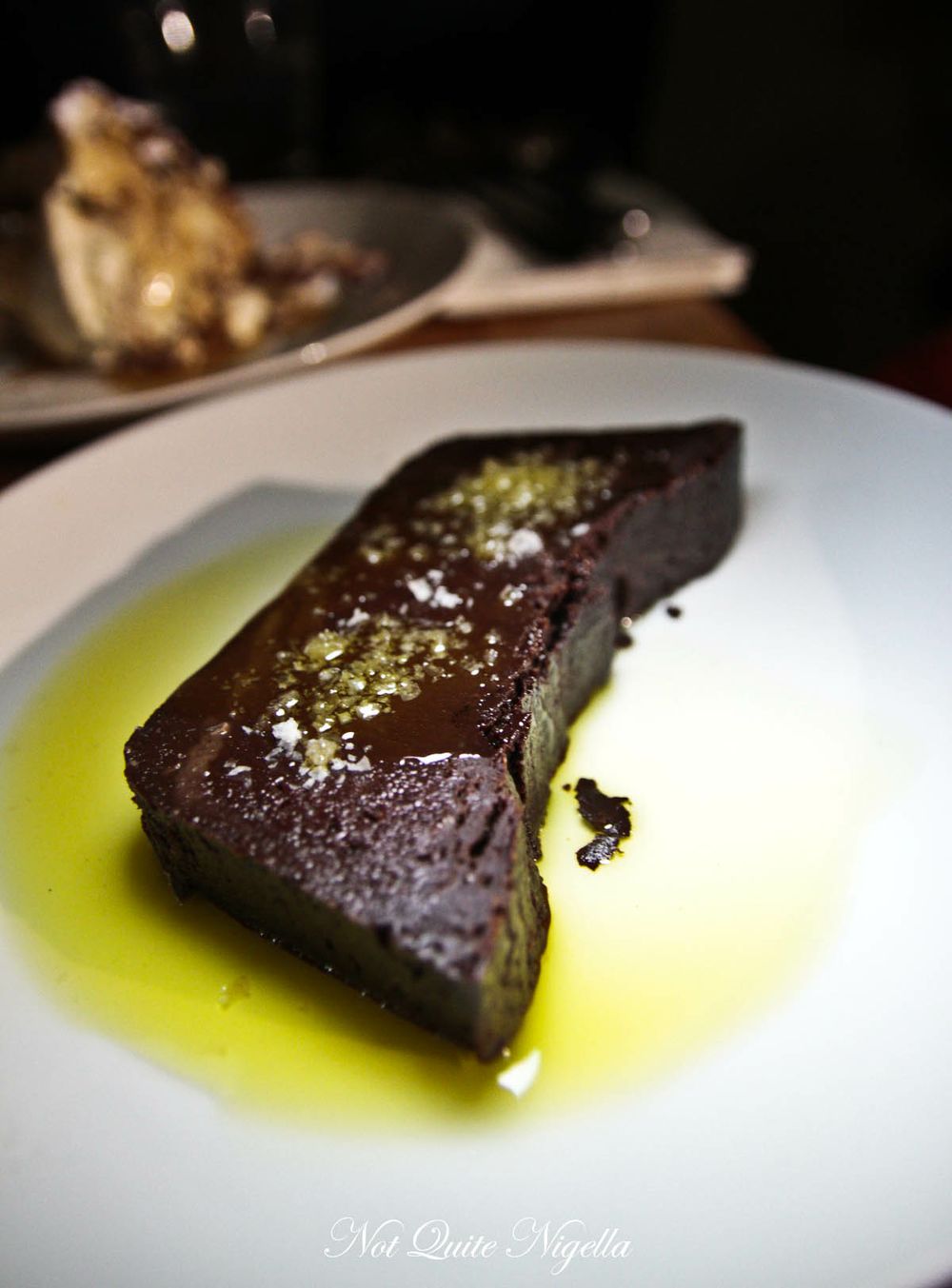 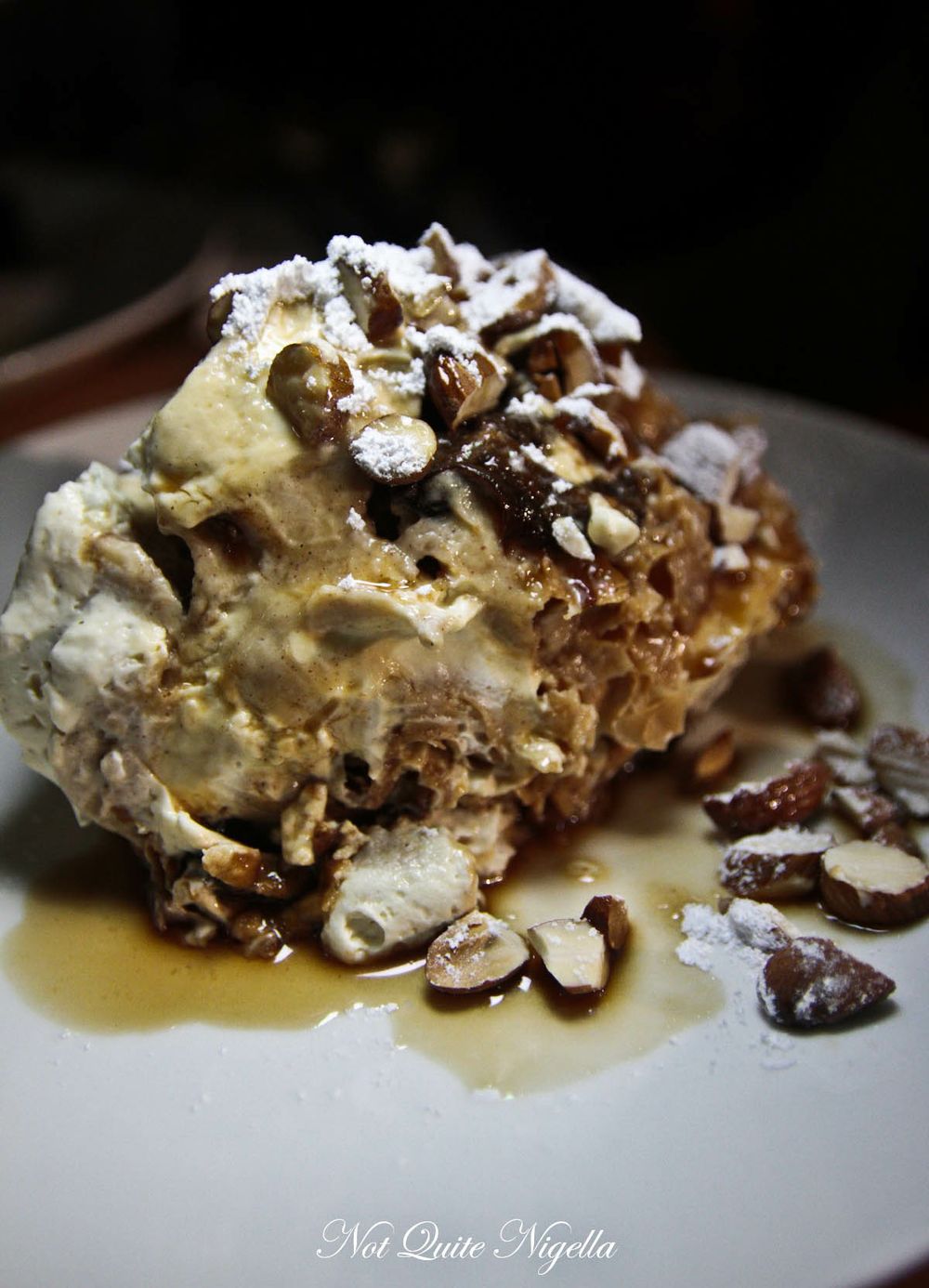 As soon as I started to read this dessert out to the other girls, I think we all knew that we had to have it. It's served as an absolutely enormous, fluffy mound filled with a variety of textures and flavours. It's essentially puff pastry damped down with vanilla custard, Pedro Ximenez cream, soaked prunes and chopped almonds. It's a textural delight although one thing is that every spoonful tastes a little different because it's such a large dessert and the taste depends on where you are scooping from. And there's that extra hit of sherry, because little did you know but you needed it!

So tell me Dear Reader, do you ever have not-for-public-consumption conversations? And given a choice, do you prefer to eat indoors or outdoors? 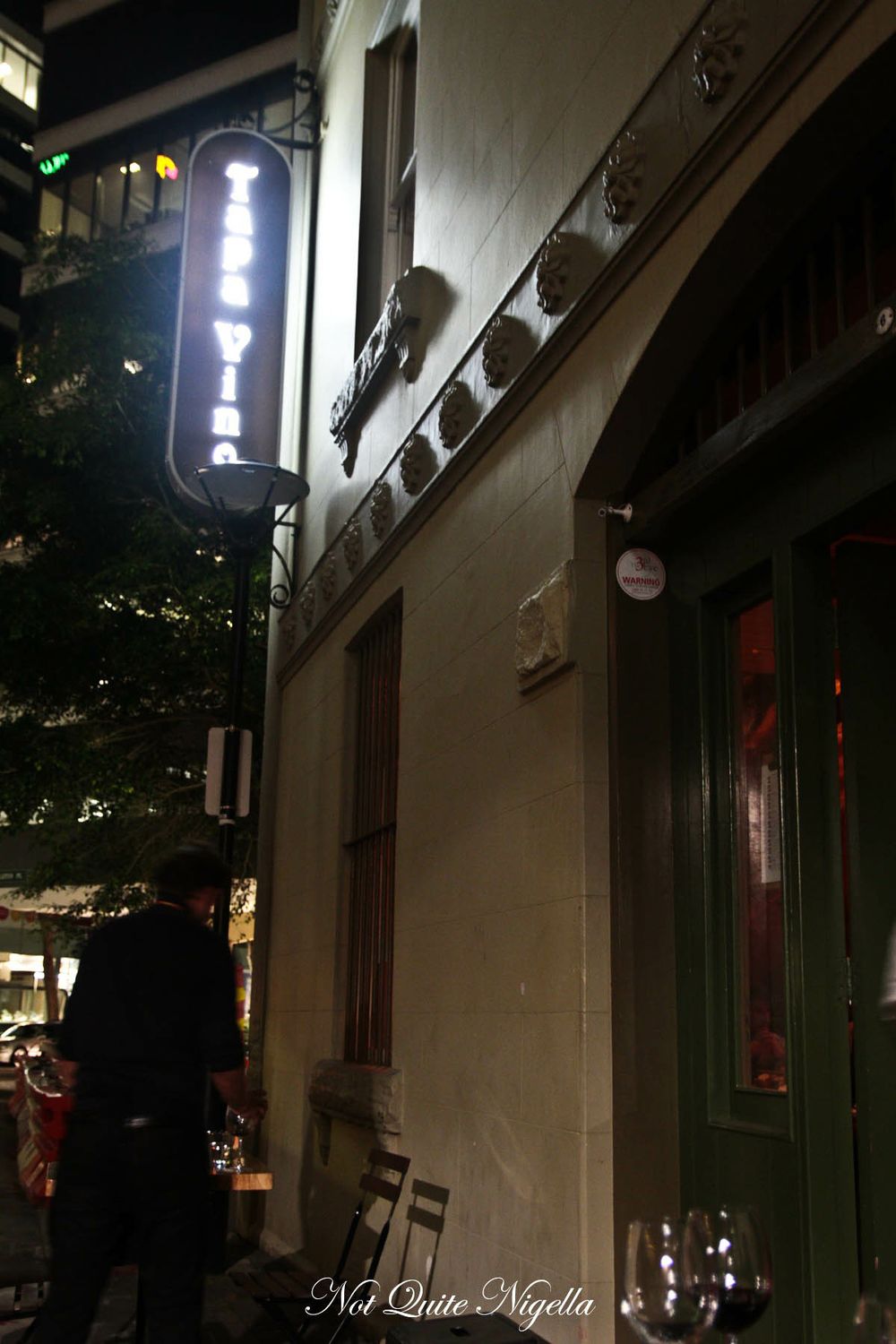 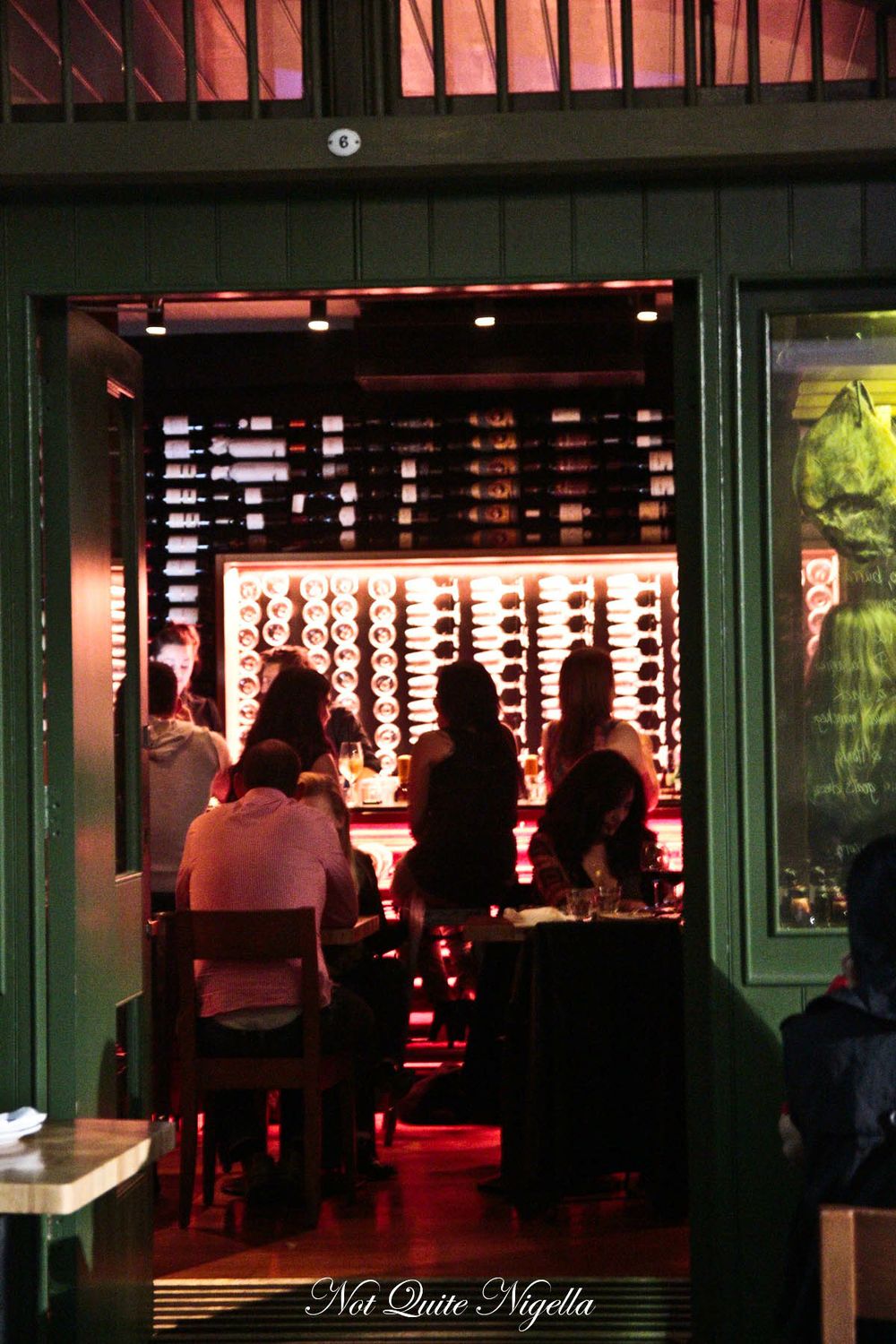