Herbed and Honeyed Bulgur Wheat Nut Salad and some shout-outs! 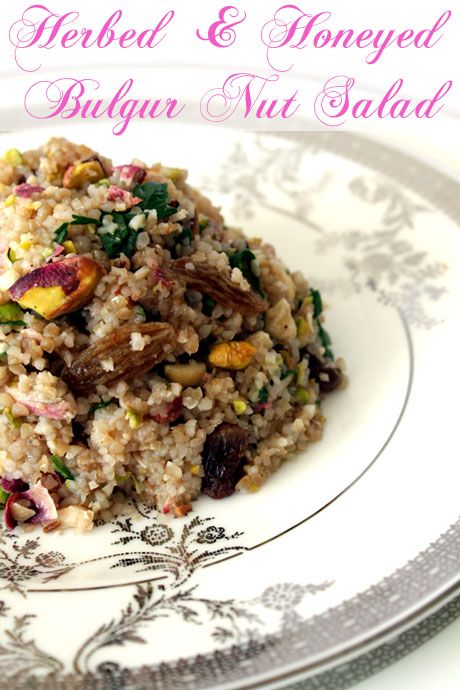 I was watching Nigella Feasts on DVD and I came across her making this salad which prompted me to sit up and take notice (yes I love watching TV while lying in bed) . The item that pricked my interested was the Pomegranate Molasses as I have a cute little bottle it, mostly unused as I don't have that many recipes to use it with. Despite it's name, Pomegranate Molasses is not as sweet as regular molasses, rather it has a tangy jolt to it. It also happened that I had a freshly cut 1/2 a lemon, a bunch of parsley and some nuts in my fridge as well as a packet of Burgul in the cupboard. You see I simply had to make it because I had everything present. 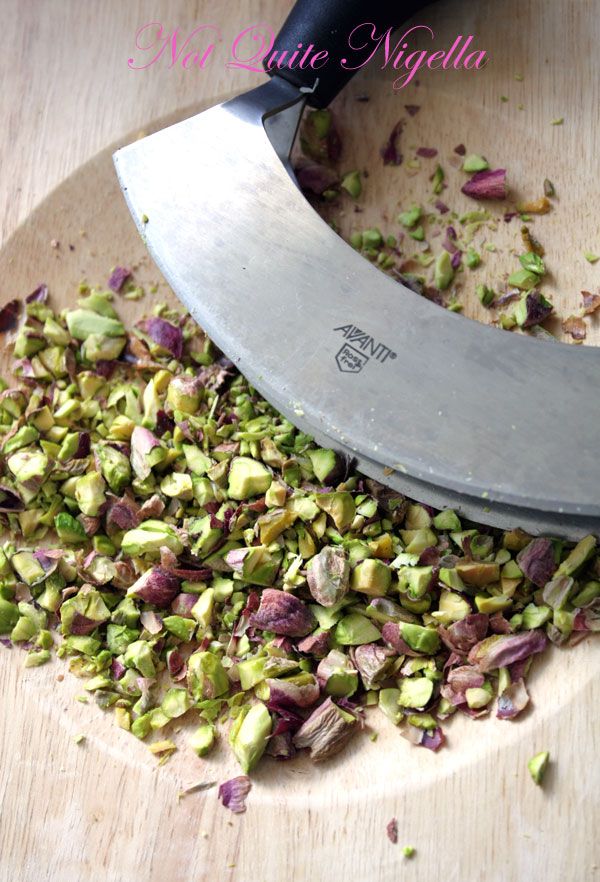 In the theme of using neglected items, I used my oft neglected mezzaluna for this salad. I bought one as I saw Nigella using it and thought that it sounded wonderful but it has sat in my cupboard for most of its life as I dislike the idea of washing more utensils than necessary. I figured that since I was making a Tabouli shortly afterwards then the bother of washing it would be justified with its two dish use. 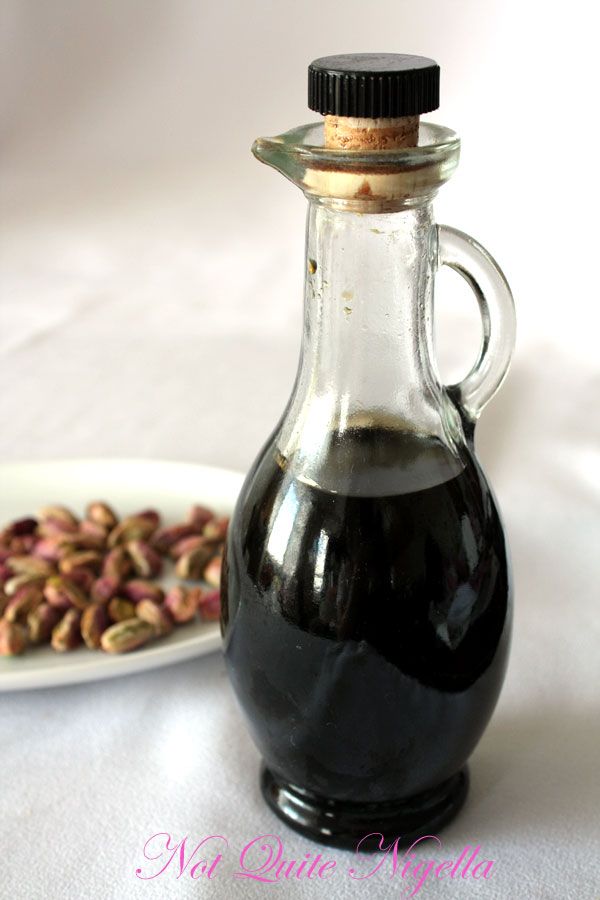 The salad itself is a curious mixtures of sweet cracked wheat with herbs. I originally had it without honey, the way that Nigella gives the recipe, but my husband and I felt that it was just too tangy with the lemon juice and pomegranate molasses. She originally includes dried barberries but since I had never heard of these I used the Iranian Green sultanas that I had. It's also delicious for breakfast, as a grain it reminds me of porridges and cereals. As for the settings, it's one of my favourites, a Vera Wang design called Lace Platinum. Not quite Middle Eastern but a design I think lends a certain prettiness to this already pink, green and golden accented salad. 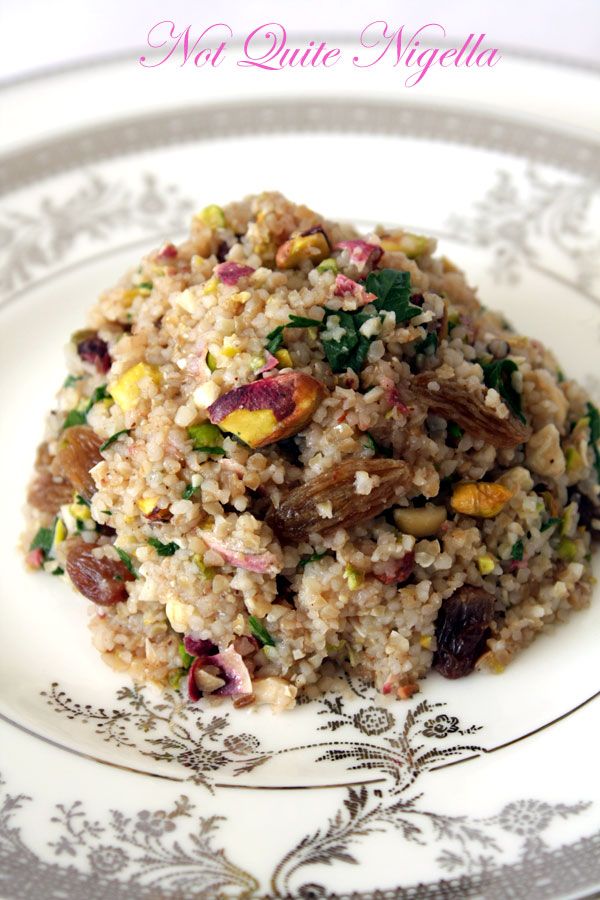 I am also taking this chance to respond to some long overdue tags, awards and memes from four lovely bloggers, SalutetoSanity, A Spoonful of Sugar, Snookydoodlecakes and A Duck in Her Pond. As for 6 random facts about myself let me think...

Step 1 - I love ziplock bags. There's nothing like slipping a brand new one out of the box and using it.

Step 2 - Two sites that make me laugh for entirely different reasons are: I canhascheezburger.com and dlisted.com

Step 4 - I also wonder if TVP (Textured Vegetable Protein) is in fact, cardboard

Step 5 - I _always _have problems with the anti spam word verification where I need to write down the string of letters or numbers. I usually have to try it 2-3 times or do it slowly with 1 finger typing in each character. Conveniently, I am ignoring the fact that it suggests that I cannot follow simple instructions...

Step 6 - I find it weird when at the end of Dr Phil, he walks off with Robin. It's just weirdly uncomfortable and they both look like can't wait to escape his audience (which they probably can't). An emergency airlift by helicopter would be more subtle.

And now I am off to tag 6 other bloggers. I thought I'd do one with a newer blogger bias (blogs starting this year), just to spread the love! In no particular order:

Step 2 - My buddies from Here Comes the Food

Step 3 - The guys and gals at Eat, Show and Tell

Step 4 - Karen from Citrus and Candy

Step 1 - Place bulgur and sultanas in a bowl and pour 3 cups fo boiling water over it. Cover with cling film and leave for 20 minutes to plump up.

Step 2 - Place all other ingredients in a jug and whisk.

Step 3 - Drain bulgur and sultanas through a sieve and press out excess water with a wooden spoon. Pour over dressing and nuts and toss using two forks. Season with salt and pepper and taste, season again if needed. 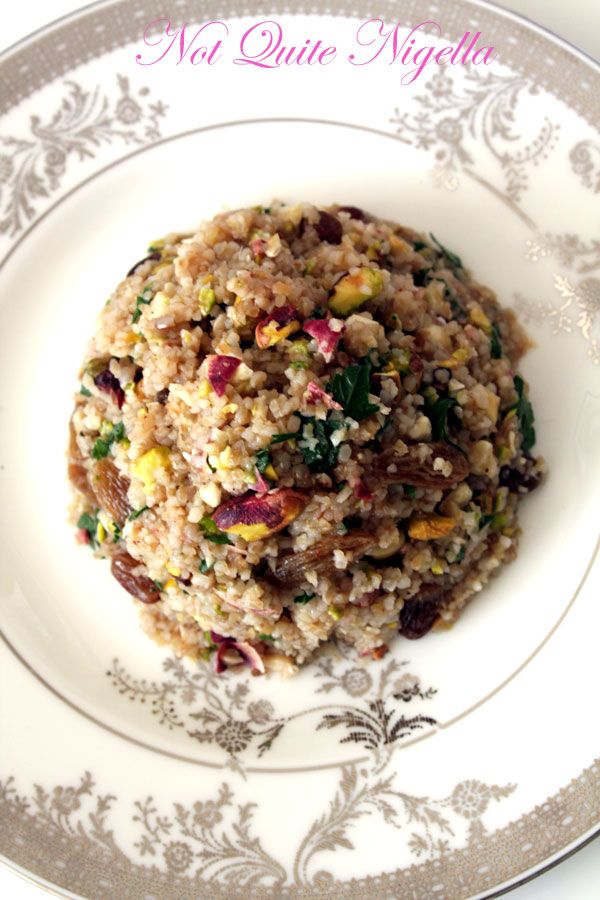