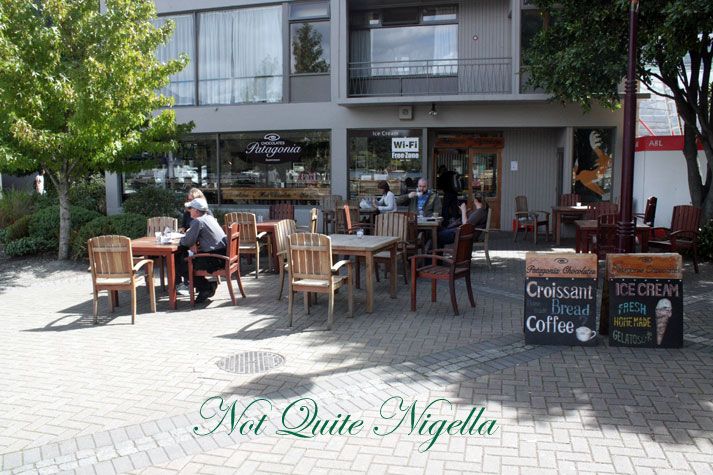 When I was planning our trip to New Zealand and specifically Queenstown, the one name that would consistently pop up was Patagonia Chocolates. Chocolatiers are always going to win fans by the fact that they produce some of the most delectable items on earth but this was different. People insisted that I visit there and try some of their goodies. Some were downright pushy with their insistence. I know the look, for when I love something I get the same fierce expression. 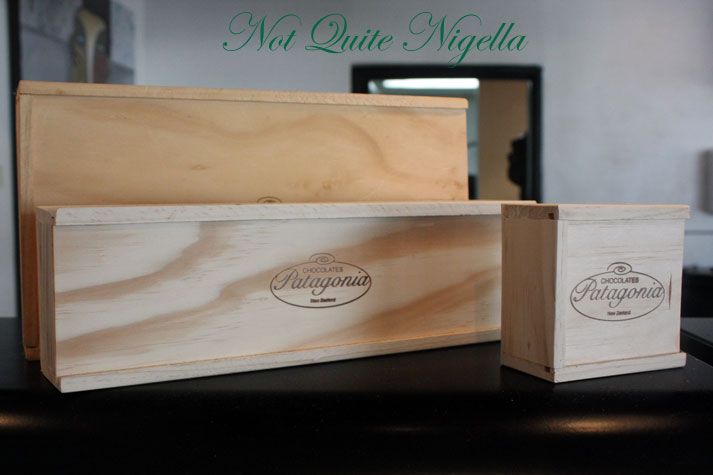 This sunny Queenstown morning I met up with Alejandro (or Alex) Gimenez, the owner and founder of Patagonia Chocolates to find out a bit about his chocolates and his philosophy. Gimenez founded Patagonia Chocolates 4 years ago after emigrating from his native Argentina (he is an Argentinean of Italian descent) to New Zealand 7 years ago as a Hangglider pilot. On his first day he was struck at how similar the temperates were between Queenstown and Patagonia, both being 45° South latitude. He knew about chocolate as many Germans and Swiss emigrated to Argentina and set up a chocolate industry there. On his second day he was planning his shop location.

Interestingly I found this tidbit on the Queenstown Heritage website_ "45 North and 45 South are very different worlds. In the temperate zones, global winds flow West to East round the planet. In the North that journey takes them through heavily populated and industrialised regions. In the South, there is only Central Otago and Patagonia. While well over 100 million people live between 44º and 46º North, there are less than 400,000 living in the Southern strip. This reflects in a lack of pollution and disease pressure - there is no vineyard in Central Otago within 200 kms of a traffic light"_ 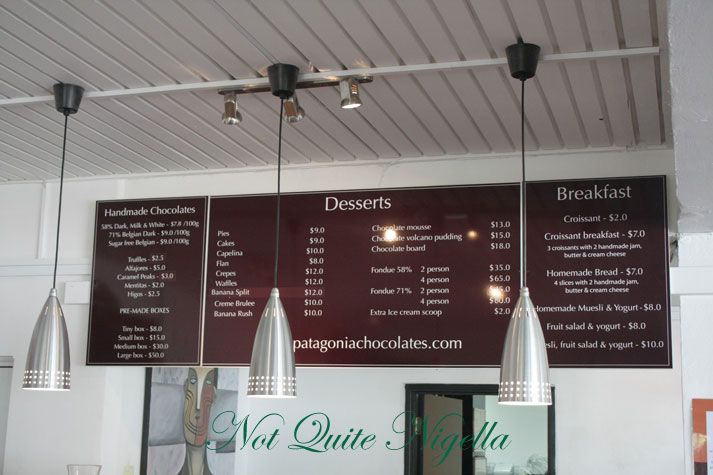 He started off with 1 shop in nearby Arrowtown and was an almost instant success so after 6 months opened his Queenstown store. After 2 years he extended the chocolate range to include desserts and coffee. One of the biggest decisions at this stage was whether to invest in an ice cream machine, with machines costing about $200,000 it was a big decision but one that continued his swift trajectory with sales doubling month on month. An average day for ice cream sales sees him selling 400kgs (880pounds)  of ice cream a day, on a particularly sunny or hot day he can sell an enormous 700kgs (1540 pounds) of ice cream. 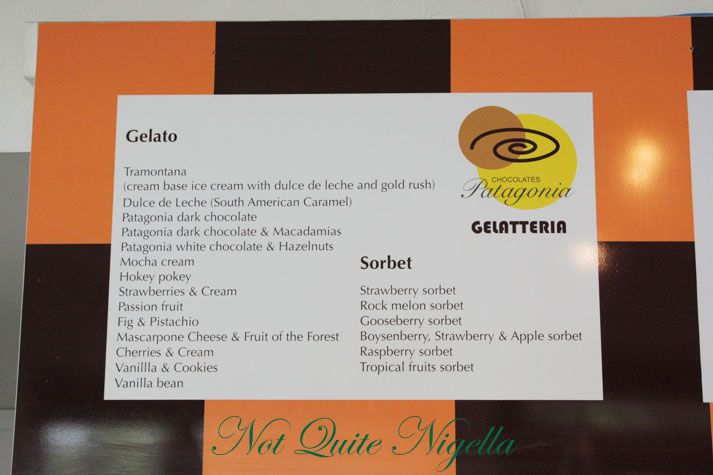 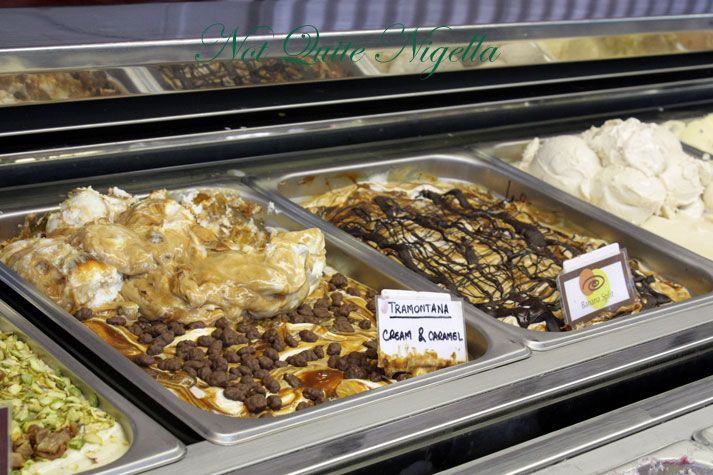 Ice cream appears to be his passion. Indeed it is painstakingly time consuming as all elements are made on the premises and he makes 30kg of dulce de leche a night to fulfill the ice cream demand and all waffle cones are made on the premises too. The only thing that isn't done themselves is the roasting of the coffee beans (which is done locally). His best seller is the Tramontana which sells between 40-80kg a day alone. At first glance it looks like chocolate chips but he explains that it is actually butterscotch balls coated in chocolate. And yes I drooled a little when he told me that. 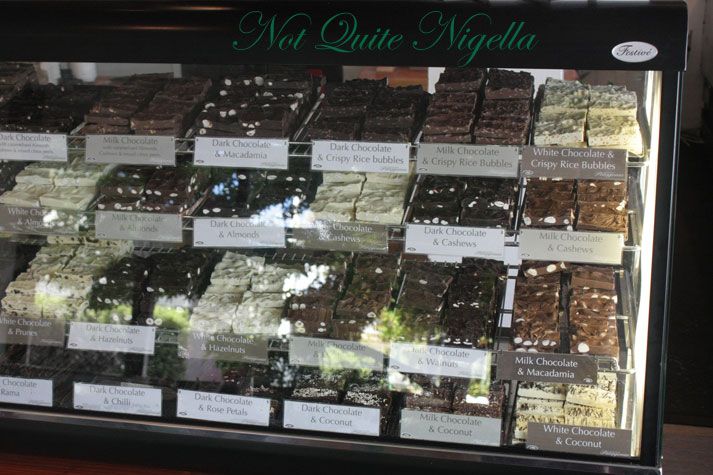 With the chocolate range, he tells us that the Arrowtown store actually has some of the more exotic flavours than the Queenstown store doesn't have such as wasabi & sesame seed; cracked pepper & lemon and cherry & pinot noir.

Given such a success, it's interesting that he has stopped short of wholesaling (and in turn probably taking over NZ with these chocolates). He gets weekly requests for wholesale but only two other stores carry the chocolates. He and his customers like the old fashioned idea of buying it from the shop and the exclusivity aspect. Interstingly he uses Belgian and Australian chocolate. As time goes by more people opt for dark chocolate with a higher cocoa content although the 58% dark and milk chocolates are the most popular. 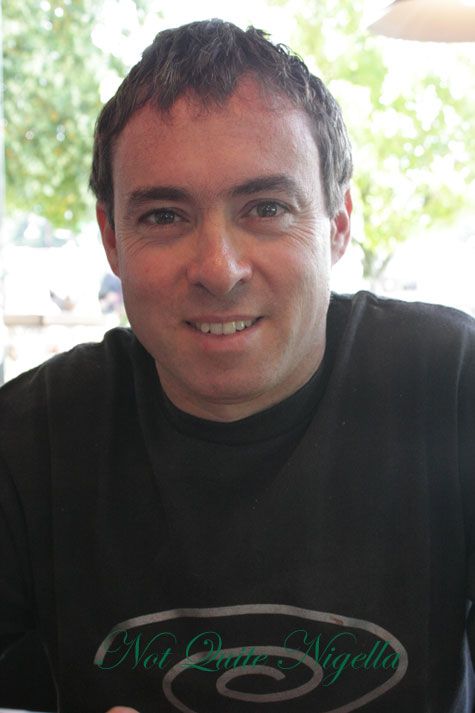 With some hands on growth he rises at 4.30am every day and get some time off during the quiet May-June times.  As for competition, he seems to welcome it. He says that it is good for customers to have choice and it is also a good motivator to push oneself to keep developing new flavours. He works with his Arrowtown chocolatier to come up with 2 new ice cream flavours and 3 new chocolate flavours a year. It takes them about 4.5 cases of ice cream to get the perfect flavour with a lot of trial and error for the perfect balance.

We try some of the ice creams, the raspberry sorbet; mascarpone & fruit of the forest; dulce de leche; banana split and chocolate and the Turkish fig & pistachio. They're deliciously creamy and true to the real flavour. In fact my favourite is the Banana Split which tastes like the creamiest frozen banana and chocolate. There's no faux banana taste, just pure good quality, perfectly ripe fruit and ingredients. 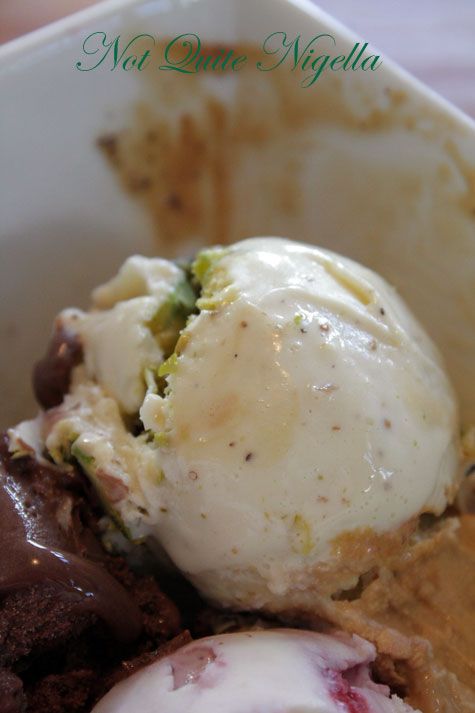 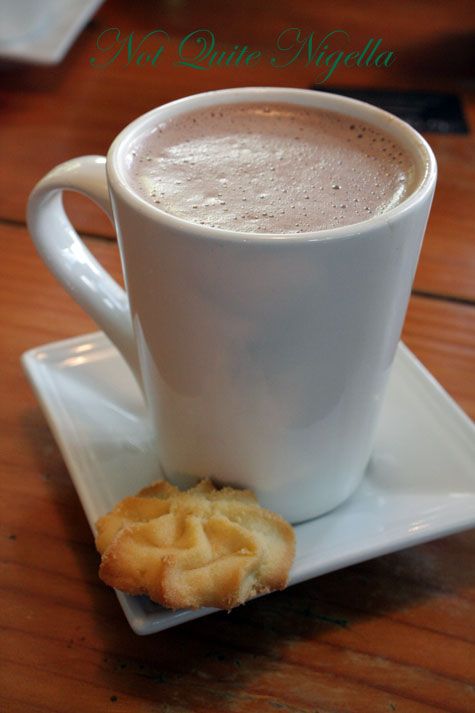 We try the hot chocolates - the chocolate and ginger flavour is deliciously warming and judiciously gingery and the chocolate with Mexican chili gives the tongue the most delightful quiver of heat. 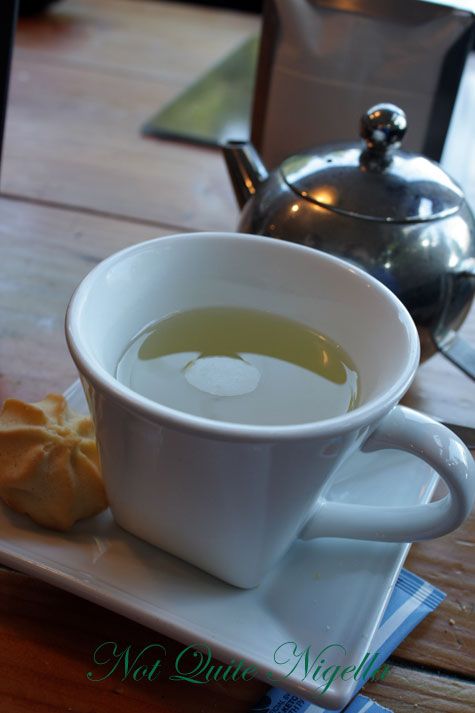 Kawakawa Tea $3 for a 1 person pot

I also later try a Kawakawa tea, a NZ plant that the Maoris use in medicine. Thankfully it's rather pleasant tasting and refreshing, reminiscent of lemongrass. 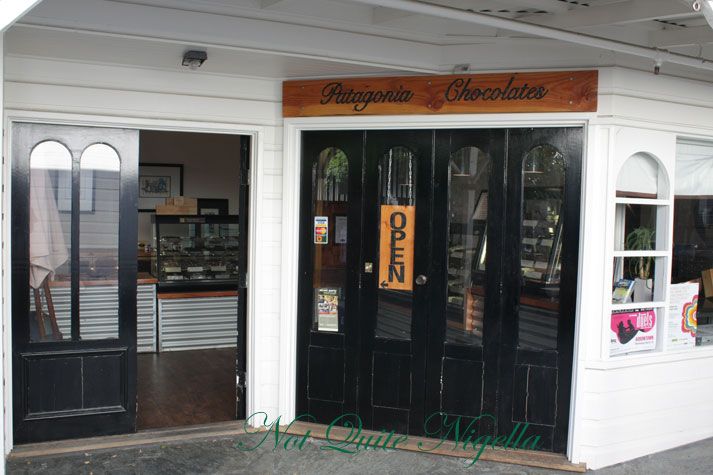 Intrigued by these additional flavours we make a quick trip to Arrowtown to purchase some of the truffles he spoke of earlier. They're $2.50 per truffle and quite sizeable at that measuring about 3cms in diameter at the bottom. 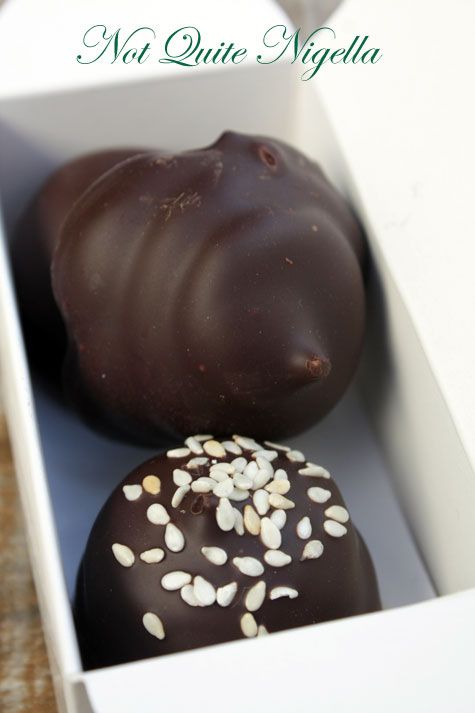 The wasabi & sesame seed is delicious although thankfully for me, not too wasabi-ish, the cherry & pinot noir is a gorgeously delectable chocolate with a whole wine soaked cherry inside (Otago is known both for its Pinot Noir and cherries) but my favourite would undoubtedly be the brilliant combination of cracked pepper & lemon. It's an unusual combination, the lemon much like a sweet zingy lemon curd and the cracked pepper absolutely present in every bite. Now if only we could convince him, to export them to Australia... 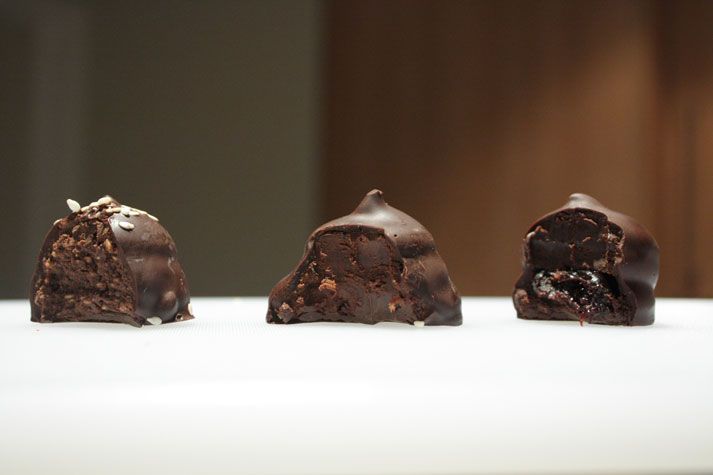 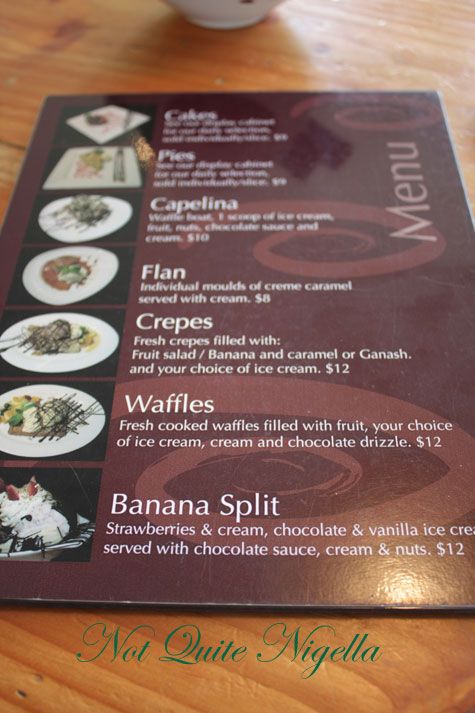