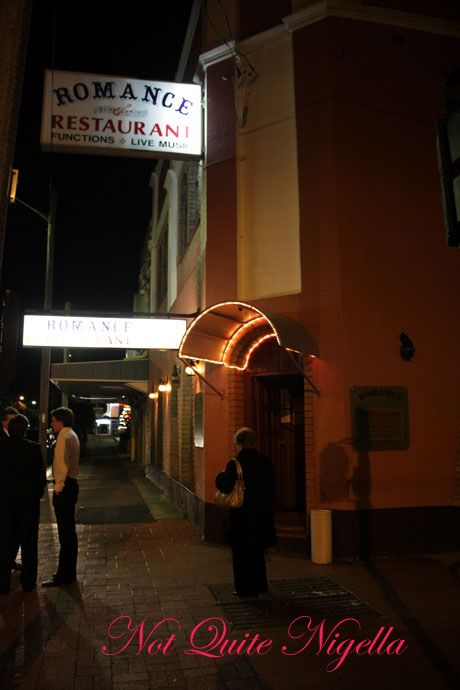 "Help! I've been held hostage by the Russians..." Naomi texts her friend late at night on a Saturday night. No, we haven't gotten ourselves embroiled in a cross cultural post-Glasnost imbroglio. We're dining at Romance, a Russian restaurant on a quiet corner in Kingsford. But more on our hostage taking later. Allow me to rewind to 7.30pm that night when The Second Wife, Gravy Beard, Naomi, Mr NQN and I entered Romance. Open just two nights a week it's said to be totally and utterly Russian and a great experience to boot - if you understand that your main will hit your table at about 10.30pm and they do things their way. As I step in I am suddenly transported back to my teenage years with my Russian best friend. She and her family would take me out to Russian dinners at places just like this. The Second Wife tells me "Our booking tonight is for 7.30pm because that's the earliest sitting" and by now the restaurant is in full swing. 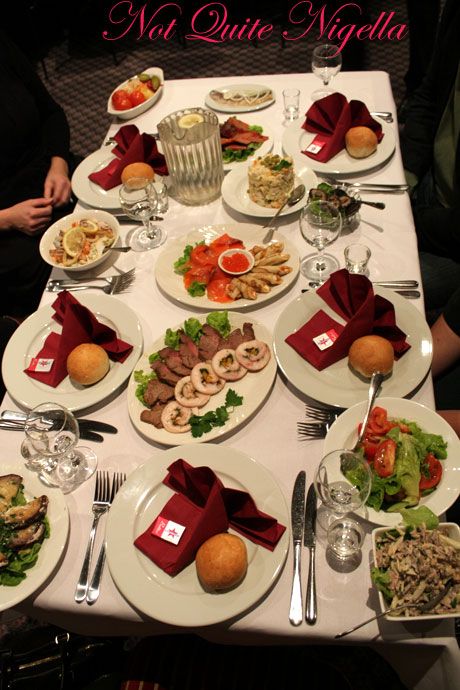 The sight that greeted us as we walked in

Just like I remember, there are cold plates of colourful food set on the table. It looks like a bountifully dressed Christmas table and our eyes widen with excitement. And did I mention that these are just the cold entrees? There are hot entrees to come as well as a main as well as drinks and shots of vodka and all of this for $65 a person (and it's assumed that you will have the set menu unless you specify so when booking). If you order a la carte, entrees are on average $14.90 and mains $24.90 and $29.90. Jugs of drink are a steal at $5, shots of vodka with a thin slice of lemon $10 and complimentary jugs of raspberry cordial are replenished throughout the night by the young waiters in civilian clothing. 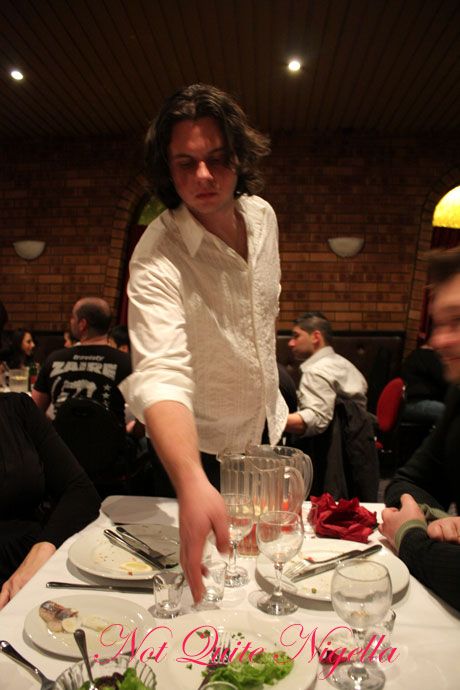 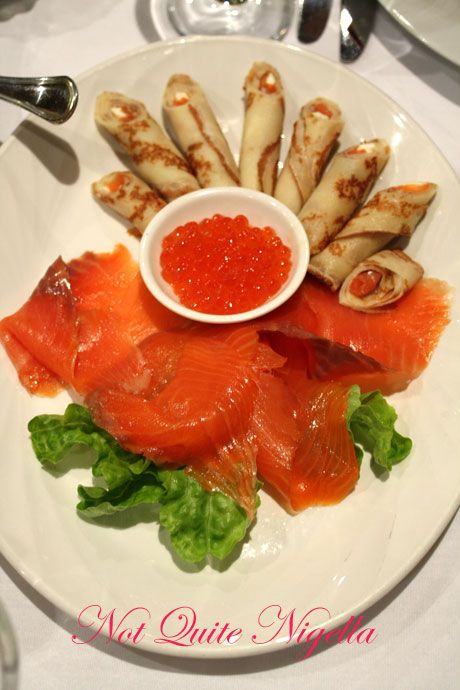 We dive right in and try the entrees. I start with the item that I know I will like the best. The plate has sheets of folded smoked salmon, a bowl of fat caviar peals and thinly rolled blinis spread with Philadelphia cream cheese. It's lip smackingly good and I love the little salty bursts of caviar on my tongue and the portions of each component generous, particularly the smoked salmon and caviar. 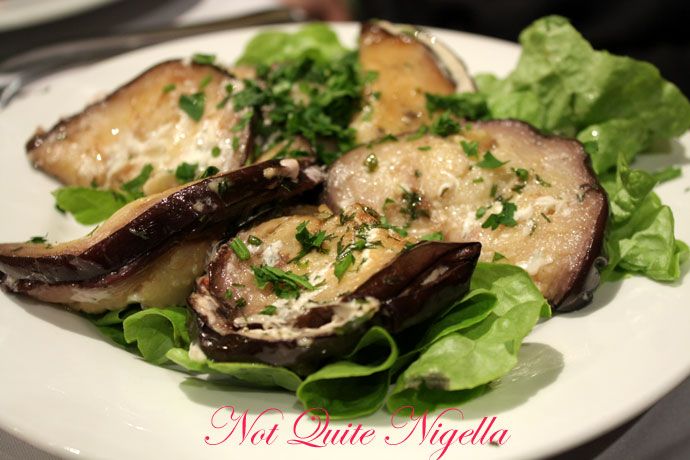 Deceptively simple looking, these moist, soft eggplant discs are filled with tomato and garlic and pack a flavour hit. 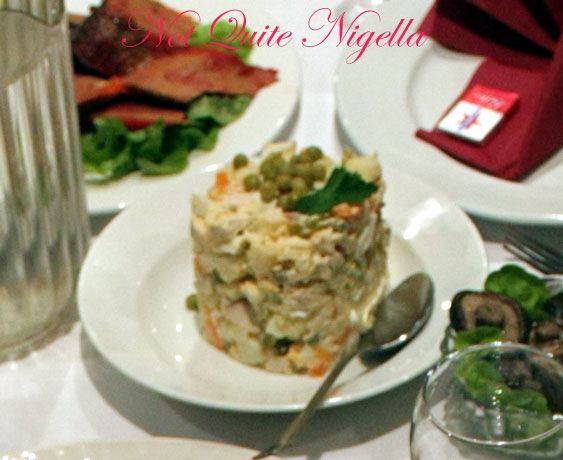 The Salad Olivier is a fortress of potato salad with mayonnaise, egg and peas and was one of my favourite items from my teenage years when I used to go over to my friend's house and her mum would feed me this. I prefer mine with more dill in it though but this is a good version. Apologies for the photo quality, in the rush we forgot to get a close up photo of this. 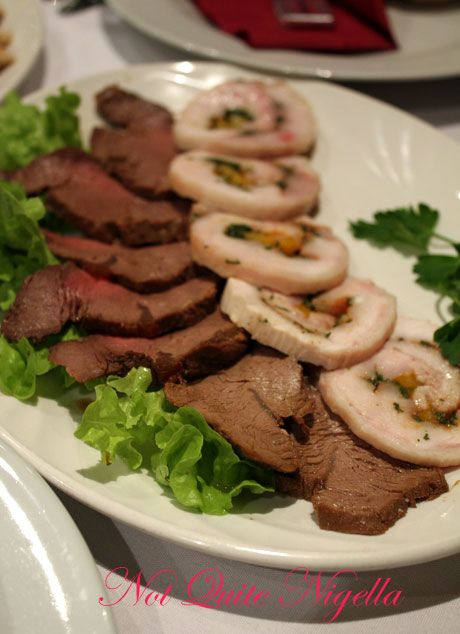 The chicken roulade is moist and the roast beef is good although nowhere near as exciting as the rest of the dishes. 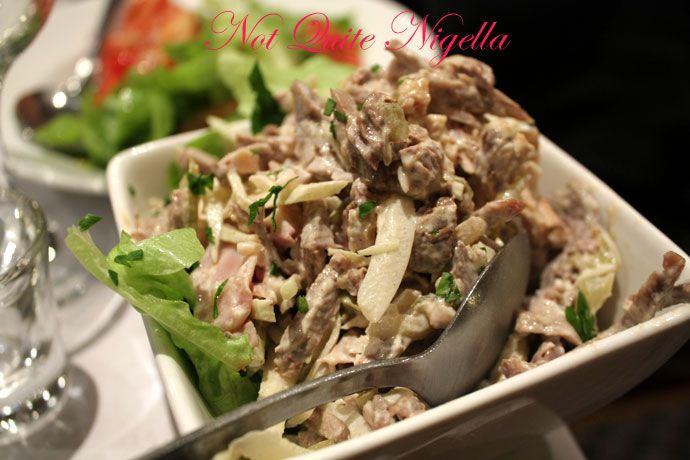 Some  dishes diverge slightly from what is on the menu. On the menu as a chicken salad we instead receive a meat salad which are slices of cold roast chicken and beef sliced thinly with apple, celery and mayonnaise. It's simple but absolutely delicious and a favourite of the table. 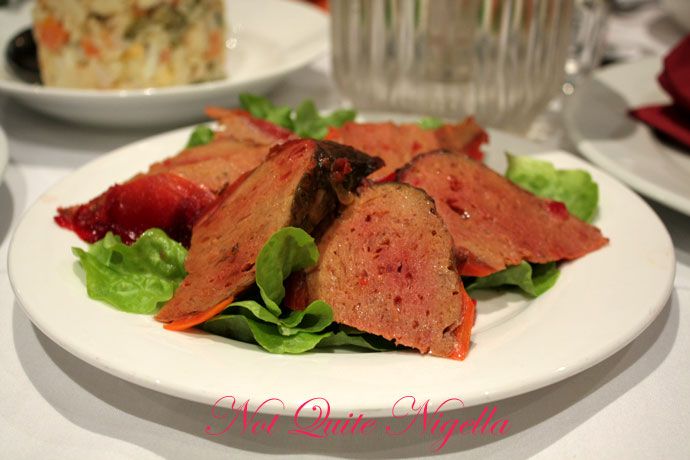 This dish was a little alarming in appearance and we poked and prodded this before the very friendly owner came over to explain what it was. It's minced fish baked with herbs and tomato and set with an aspic with carrots and beetroot. It's actually one of my favourite dishes but then again I love gefilte fish so if you're also a fan you'd probably like this. 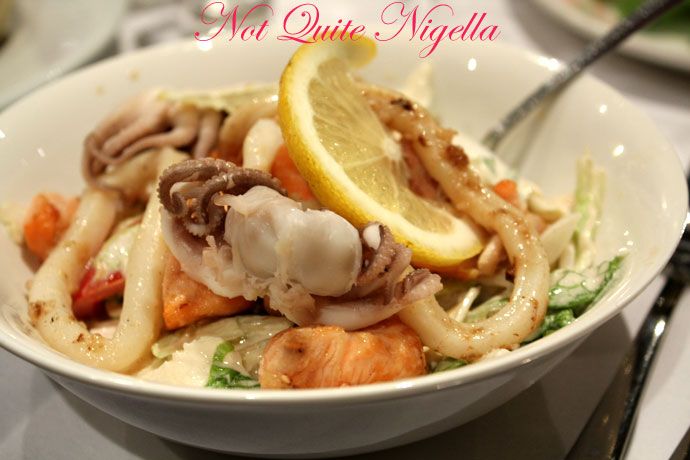 The seafood salad has pieces of calamari, mussels, octopus and fish with some crumbed and fried pieces and some simply poached. It's dressed in a light vinegary dressing. 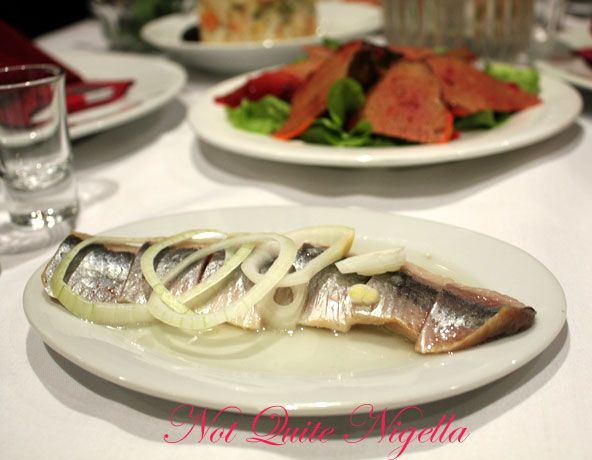 The Russian Style herring which has people divided is delicious. I love pickled herrings and unmistakebly Herring taste and when it's served with onion rings it is salty and flavoursome. 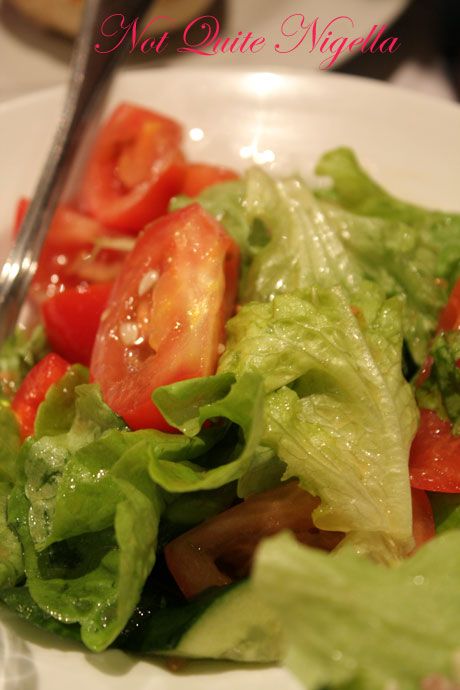 In my excitement, I forgot to try this salad but it was a plain garden salad. 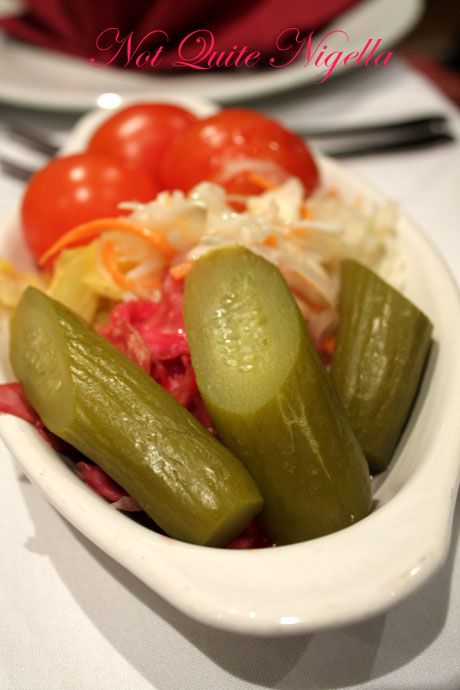 The Russian style salted and marinted pickles also prove popular and I particularly like the cucumber dill pickle. 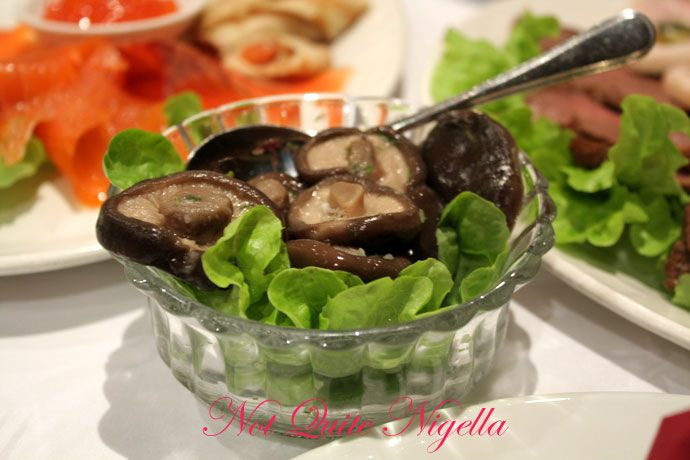 The mushrooms (shiitake) are plump, slippery and redolent with garlic.

We sit back convinced that we're now completely full but then a quick glance at the menu tells us that we not only have our mains to come but also hot entrees! 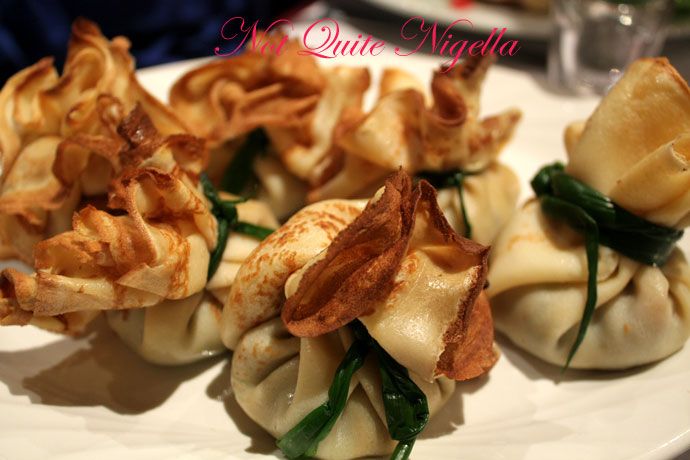 The first hot entree is the Blini crepes presented Moneybag-style and tied with a blanched spring onion. It's filled with a creamy stroganoff style mushroom and beef filling and is comfortingly good. 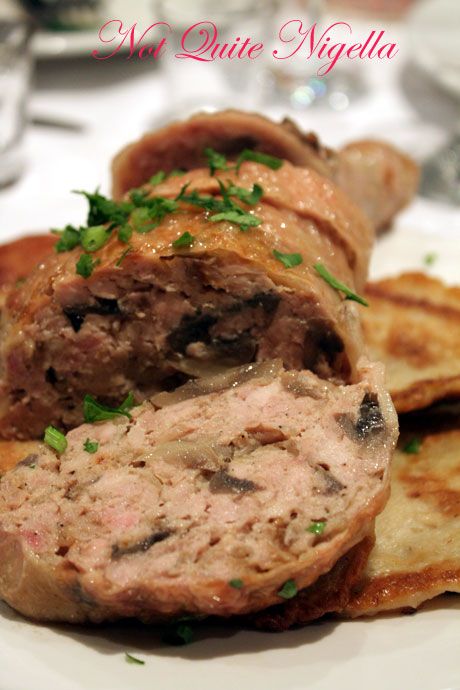 The Stuffed Chicken Marylan looks enormous is a most curious dish. It is actually chicken meat that has been minced and then stuffed back into the skin. None of us can figure out how it's done as the skin remains intact on the outside yet the inside is most certainly minced. In any case, it's great and served with the potato patties which resemble thick potato pancakes, it's sealing our fate. Yes we are full - resoundingly so. 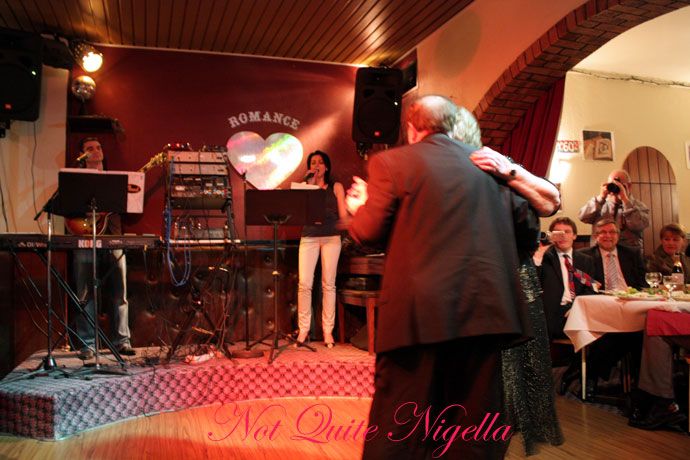 There's some action on the dancefloor as the live music starts up (and it's loud) and there's a 60th wedding anniversary party in the corner. Then after the anniversary couple's dance there's plenty of dancing action as adults and kids dance to Russian and English music. A group of kids attempt a Cossack dance on the small dancefloor. There's certainly a feel of being at a wedding with the huge meals, multiple courses and dancing and our fellow diners are in a very convivial mood. 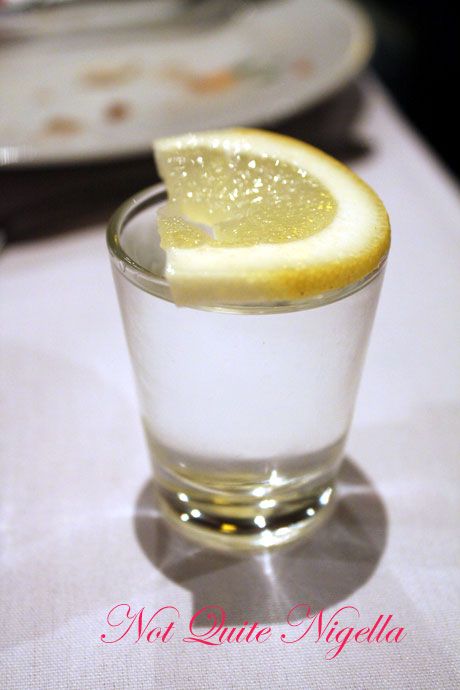 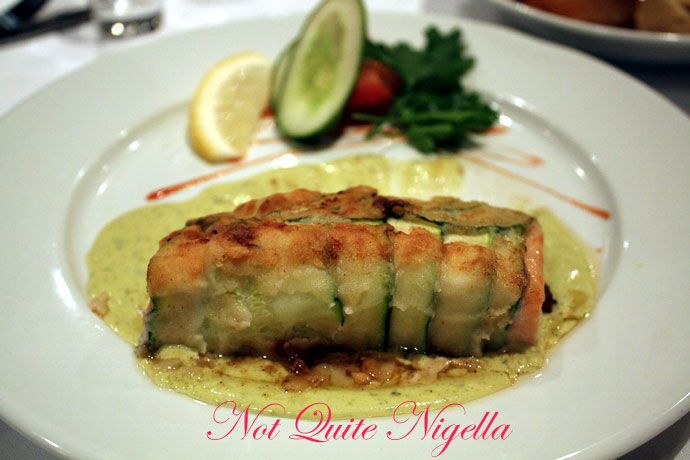 A little shot of vodka and we're about to wave the white flag of surrender when our mains arrive. Grilled salmon wrapped in fine zucchini slices with "green sauce". The salmon is lovely and tender - miraculously so as everyone in the restaurant is served at the same time adding to the wedding like atmosphere and the fact that the mains are served alternate style. Gravy Beard takes a peek into the kitchen later and spies only three women in there churning out a huge number of meals. The green sauce is a wonderful creamy basil sauce which goes so well with the salmon and zucchini. 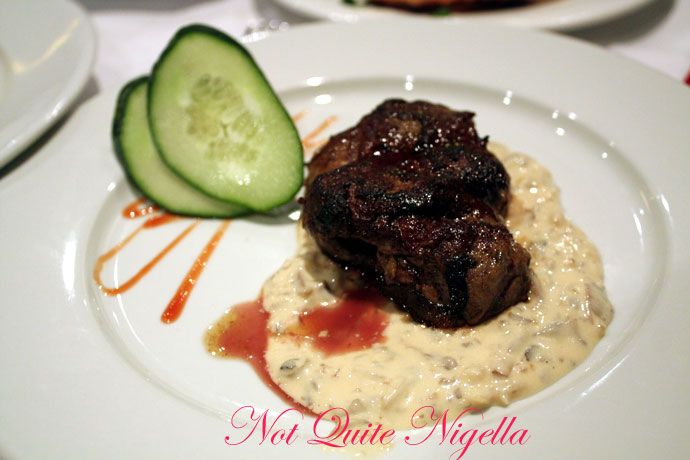 Now the bit where most weddings fall short is the beef. It's often chewy and horrible as a result of being cooked twice for a large number of people and when this is set down in front of us, there's a trail of blood on the side of the sauce. It doesn't look promising. However it is actually a pretty good piece of beef. Better than anything we've ever been served at a wedding and is actually tender the whole way through. Gravy Beard and Mr NQN are very impressed at the tender, gristle free steak. 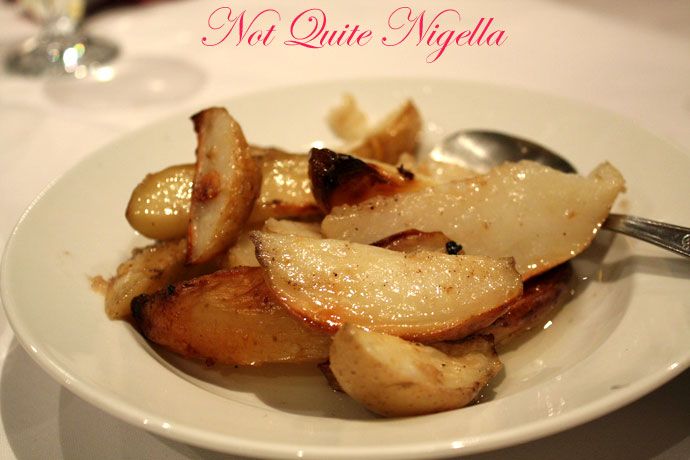 The potatoes on the side are garlicky and delicious with an almost sticky texture.

After our mains it's about 11pm and the band plays the sultry Still Got the Blues. This is the cue for the kids to leave the dance floor and the couples take to the stage. There's one couple who are going for the most amorous title with a very graphic, firm and long lasting bottom grab that has been burned into my retina. The kids are sugared up (presumably from the cordial) and do leap frogs over each other. We take this as a cue to leave as we don't have any room for dessert. We ask for the bill several times and finally ask the owner who seems surprised and a touch disappointed that we are leaving. He asks us to stay and have some tea or coffee or more vodka and we decline as we have to go. He promises our bill and 40 minutes after we originally asked, we get the bill (during which time Naomi sends the ominous SMS to her friends). Only one table has actually left during this evening as everyone else is still going strong- until 1am. Yes those Russians sure know how to have a good time!

So tell me Dear Reader, are you a night owl or a day bird?