I am an odd creature in Winter time. During Summer I am a night person and love going out at night but in Winter I prefer to stay in at night and huddle close to warmth. My solution to this Winter Night-time hibernation is going out during the day when the sun is shining and then retreat back into the house at night when the sun has gone down and the temperature dips. This also is good for the species Foodus Bloggerus. This ensures that we get enough light to photograph our meals whereas dining at night means that I don't have to eat at 5pm to catch the last vestiges of light. So on Sunny days you'll find me perched outside, lizard style, bathing in the warmth and getting my Vitamin D before scurrying home. One such day was our Sunday afternoon lunch at Manta on the sexy Woolloomooloo Finger Wharf, just around the corner from where Russell Crowe and other lucky individuals live. 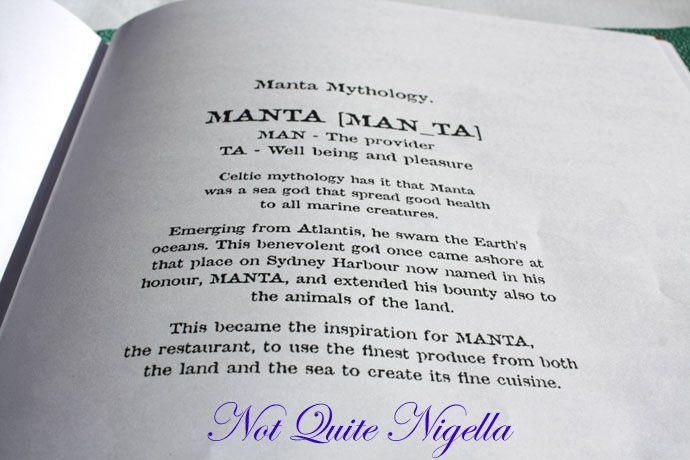 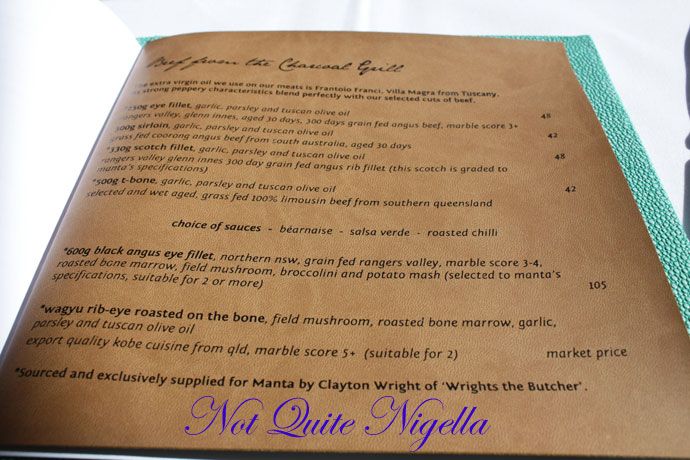 We're seated across from the wharf where in October, they'll host an Oyster festival featuring the best oysters of the season. We take a look at the menu - Manta is known for its seafood but their meat page (done in a leather look material) is beckoning. Is it silly to go to a seafood restaurant and order steak? Perhaps, but Mr NQN is liking the look of the steaks. We order some entrees and mains based on their recommendations (I always ask for staff recommendations) and sit back and soak up the sun while nearby boats bob up and down on the sparkling water. 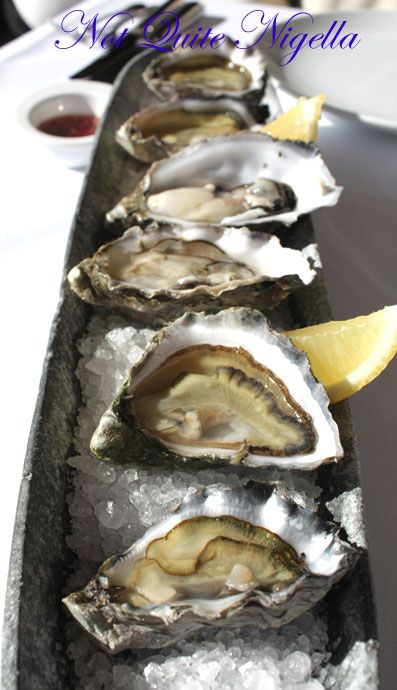 We're served three types of oysters: the Clair de Lune from Batemans Bay, Coffin Bay Pacifics and Sydney Rock Oysters from Port Stephens. As similar as oysters appear to be, when faced with the three different types we taste they're also quite distinct. The Clair de Lune is sublime and my favourite of the three, the Pacific is rich, creamy and enormous and the Sydney Rock is all briney deliciousness. 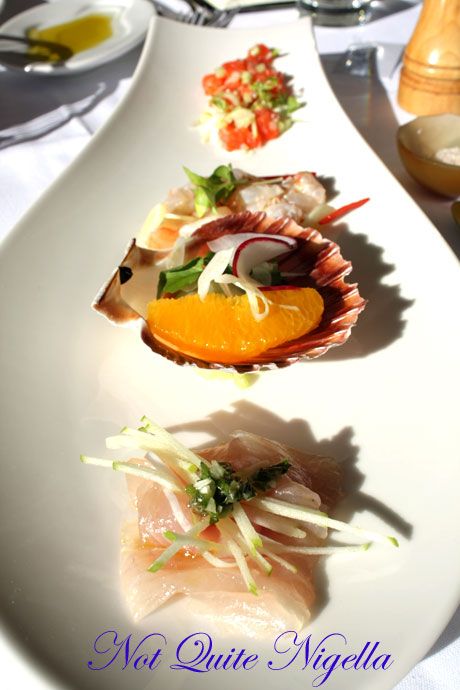 The raw selection includes Hiramasa Kingfish Carpaccio with celeriac, apple and salsa verde. The delicate flavours go well with the kingfish and the salsa verde's parsley gives the dish a lift and a freshness. 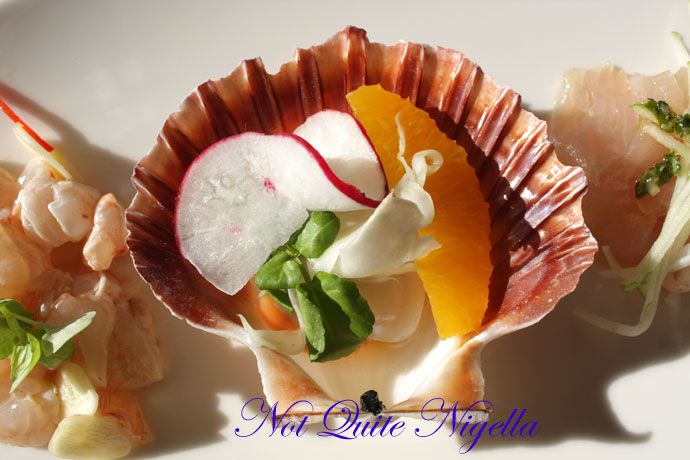 The raw Tasmanian Scallop with the roe on has sicilian capers, shaved fennel, radish and orange. It is sweet and slightly bitter from the radish and given saltiness from the caper. 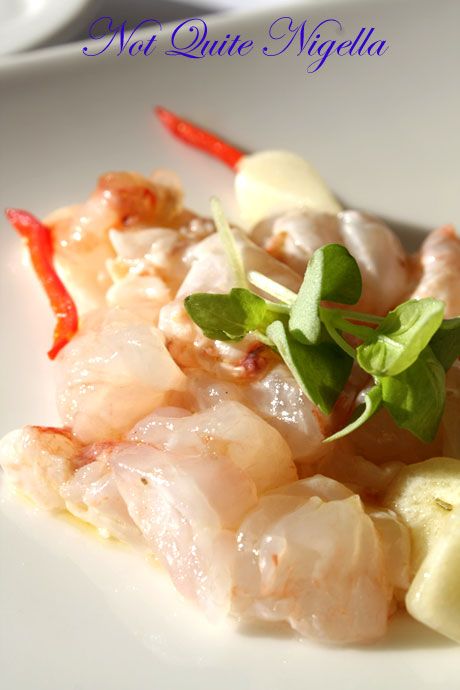 The Yamba King Prawn ceviche with garlic, chili, lime and baby basil has a lovely Asian-ey flavour to it. 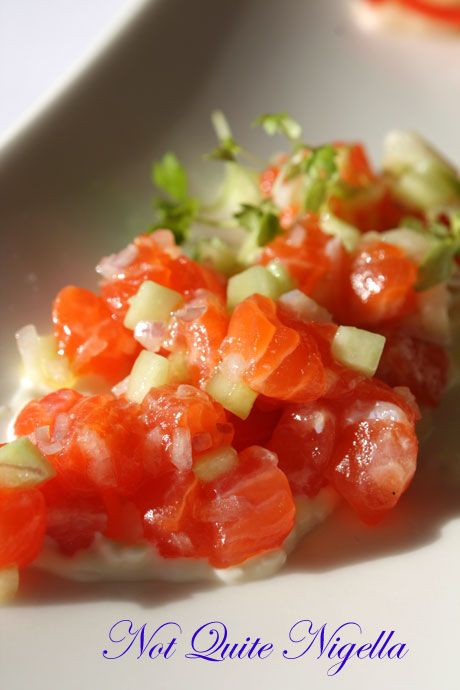 The last Ocean Trout tartare, horseradish creme fraiche, cucumber, eschallot and lemon oil is fantastially fresh with a Japanese feel to it. 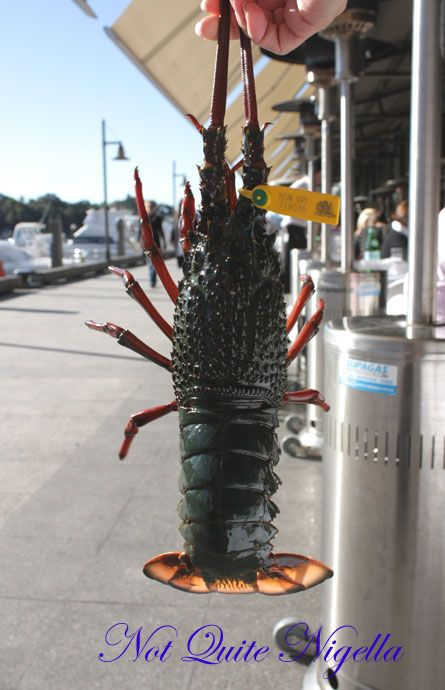 Our waitress brings our live Lobster to see us. He's protesting and I'm sure peering to the nearby water and trying to get there somehow. He executes a quick, furious snap of his tail, the restaurant patrons oooh and he's quickly ushered back in to be cooked. We're waiting about half an hour for our mains. In the meantime Mr NQN walks down to the end of the wharf to see what life is like there (it's good apparently and filled with Bentleys and more expensive boats). 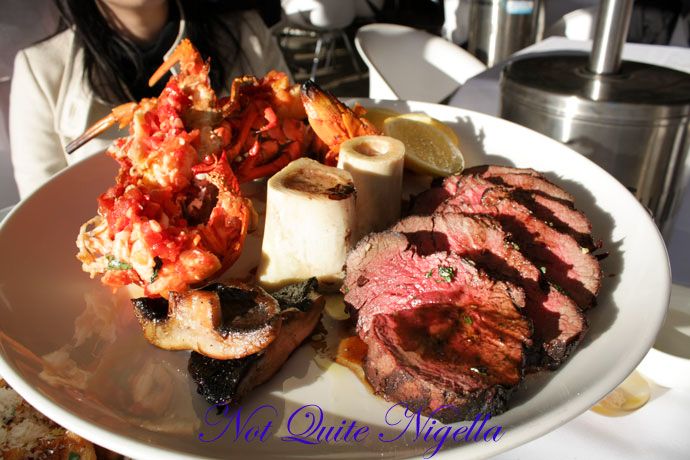 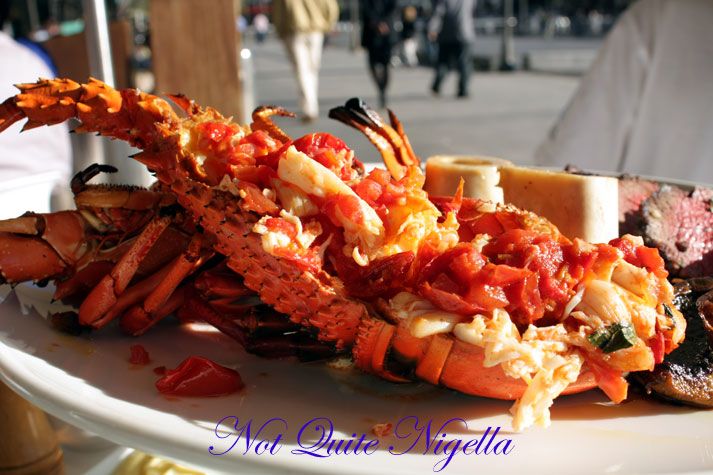 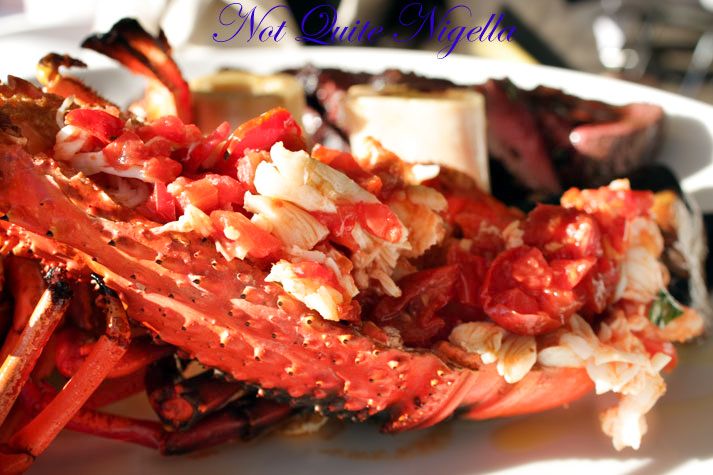 When he returns he is delighted to feast his eyes and lips on the plate. Having a plate like this set down on your table will invite stares. I felt as if Russell Crowe has sat down to join us for lunch (and no I don't have a Russell Crowe obsession at all, he just happens to be the most well known resident of this area). People slow down and elbow their friends and look lustingly. I don't blame them for what we have is the Lobster with a tomato, chili, garlic and basil sauce. It's sliced in half with the meat removed and cooked and then stuffed back in. The meat is beautifully tender and soft, not at all chewy (as lobster sometimes can be). 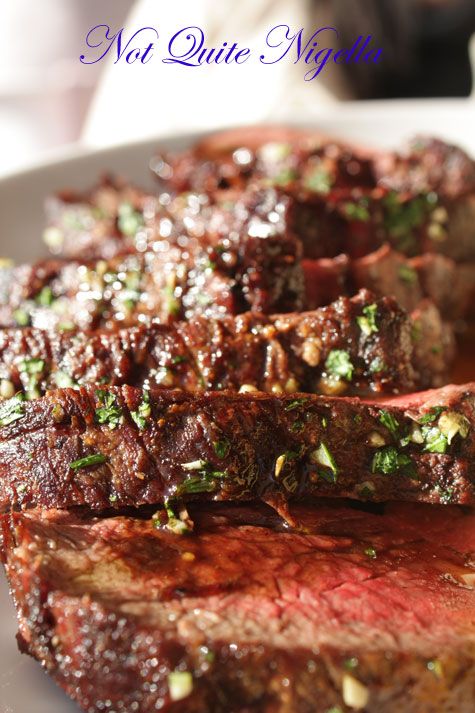 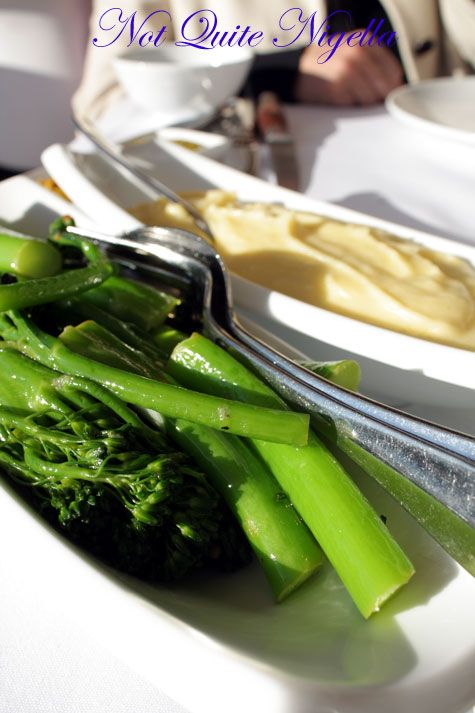 Sides for the Beef: broccolini and mashed potato

As I'm eating the lobster Mr NQN is busy with the steak. Calling it merely a steak is like calling Ferran Adria simply a cook. It's a 600g Black Angus Eye Fillet from Northern NSW, Grain fed Rangers Valley, marble score 3-4 and is served with roasted bone marrow, field mushroom, broccolini and potato mash. I should explain that for the first 18 years of his life Mr NQN was a vegetarian and as such is rather fussy with his steak. He has no such issues and for a man whose greatest compliment is It's ok he's gesturing and saying this is really, really good and it's like his version of 5 stars. I take a piece and the steak knife is not necessary. It's beautifully tender and absolutely perfectly cooked to medium rare. 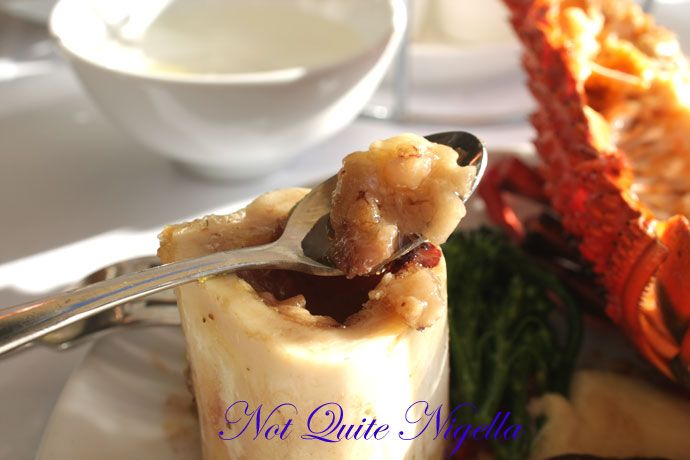 The bone marrow is soft and gelatinously creamy spread on top of the steak and the mash is creamy and garlicky. The broccolini is cooked expertly with a crunch and dressed lightly in oil. 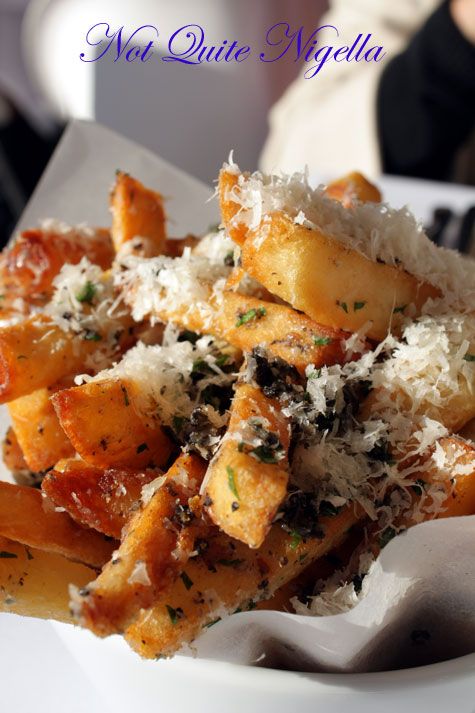 The Angel chips get fiddled and picked at but are too rich for us, particularly given the previous dishes. Heady with truffle oil and a generous dusting or reggiano cheese they're rich and probably better suited as an accompaniment to oysters if you were dining at the Oyster Bar and partaking of lighter fare.

As you can imagine there's no room at all for dessert.

So tell me Dear Reader, do you ask for a waiter's recommendations or do you prefer to wing it?

NQN and Mr NQN dined as guests of Manta Restaurant. 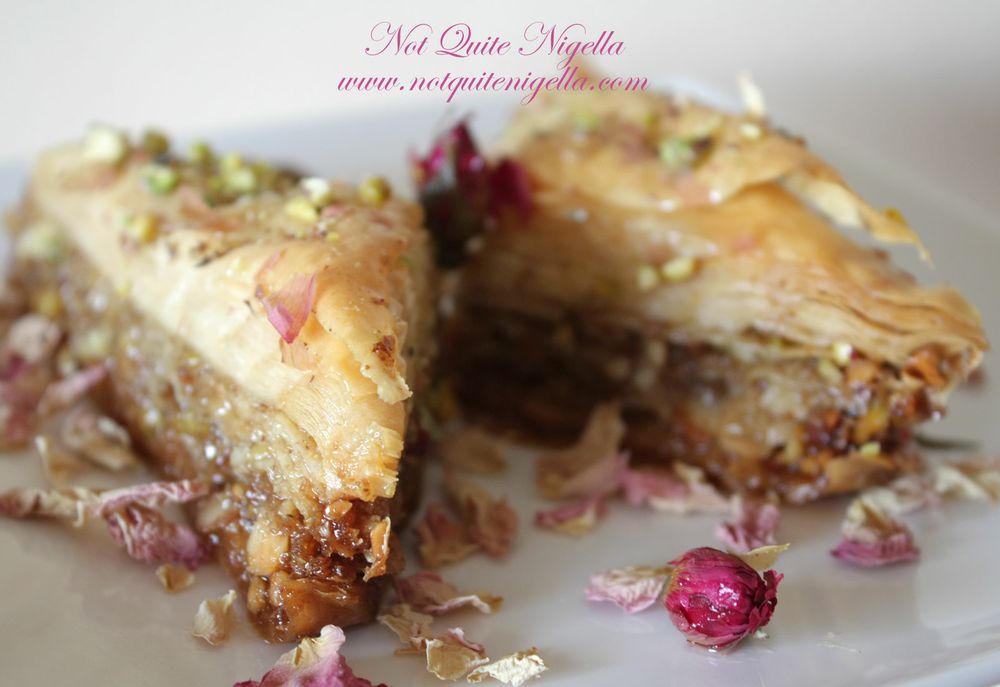 And because it's Wednesday again and hump day, here is a new Wallpaper! A Rose & Pistachio Browned Butter Baklava :)