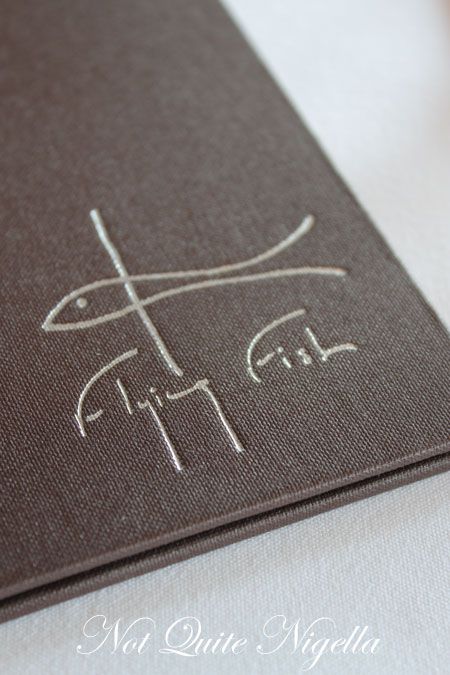 Many years ago, my friend Teena was always late for dinners. She'd be 30 minutes to about an hour late and Gina and I got so tired of it we hatched a plot to ensure that she never did it again. We knew that she wasn't deliberately doing it, she was a considerate friend apart from this but we felt like she didn't know how inconvenient it was. So one day we asked her to meet us an hour earlier than we would get there. It did the trick and after that she realised how annoying it was to have to wait for people and since then she has more or less been on time to places. 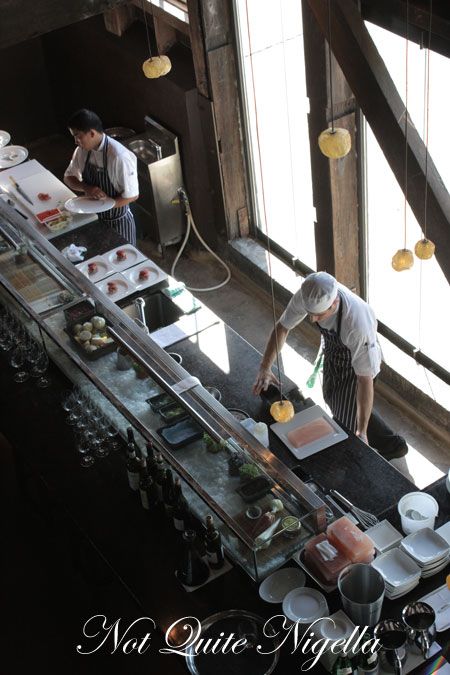 Now I realise that I am probably in danger of being this person myself. Case in point, I am supposed to be at Flying Fish at 12:30pm for a lunch with Peter Kuruvita and Jodie Wallace (the head chef of Flying Fish) and I was early. Until I realised I had no idea which wharf Flying Fish was on and proceeded to walk up and down each finger wharf in high heeled boots my feet pleading with me to get a taxi and my brain telling me that I taxi wouldn't take me a  few hundred metres. 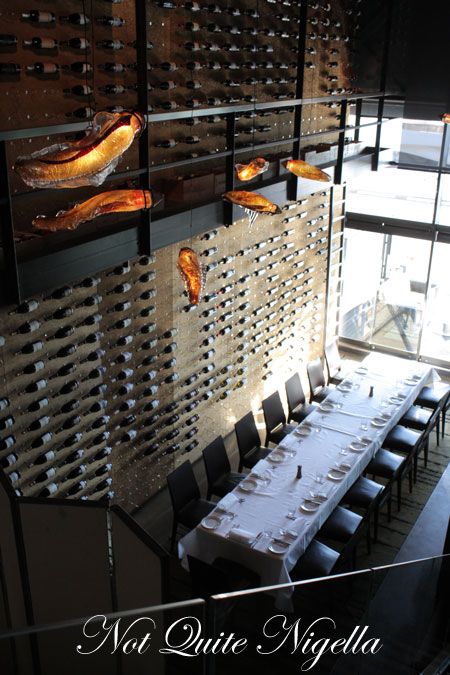 After trying in vain to call them  (the Telstra SMS arrived four hours later with their phone number) I finally got there, hot and panting and probably quite dishevelled. Set at the end of Jones Bay Wharf, it's a stunning glass fronted building with dark timber slatted ironwood walls and floors completely renovated by Kuruvita. There is no doubt that it is an expensive restaurant with mains edging towards the high $40s. During the month of June all mains are $29 Monday to Thursday. 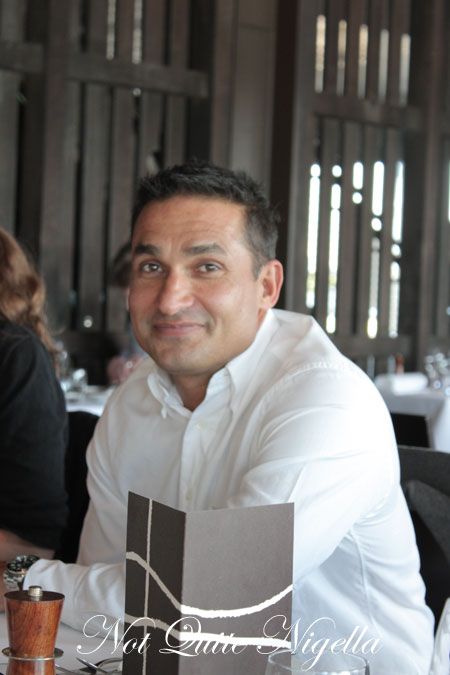 Father of three sons Kuruvita is famous for his fish of course, hence the name and location, and his Sri Lankan heritage (Kuruvita is half Sri Lankan, half Austrian) pops up in certain dishes which I'm eager to try. He has his Head Chef Blue Mountains born 26 year old Jodie Wallace. Dining with us is last year's Masterchef contestant Michelle Darlington who now manages The Essential Ingredient store. Michelle and I are undecided as to what to order so we decide that the easiest thing to do is share! 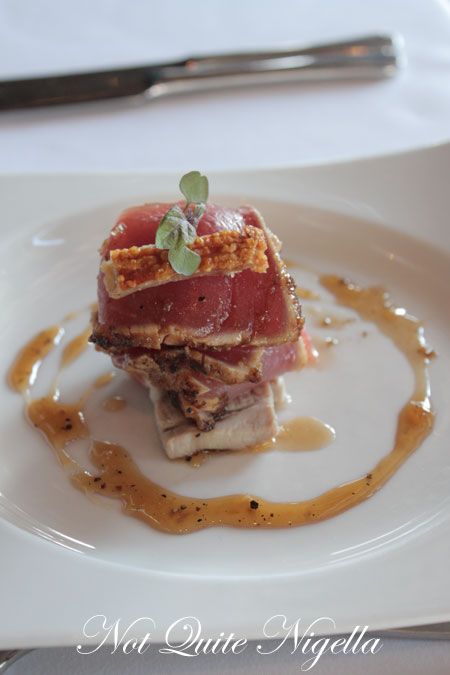 This is the dish we tried at this years Taste of Sydney, the absolutely ambrosial seared yellow fin tuna with red grapefruit and roast pork crackling. It is drizzled with their Flying Fish black pepper caramel (my favourite item from their new range) and accented with their chilli salt. It is the only dish that has been on the menu for six years and they are never allowed to remove it for fear of customers protests. 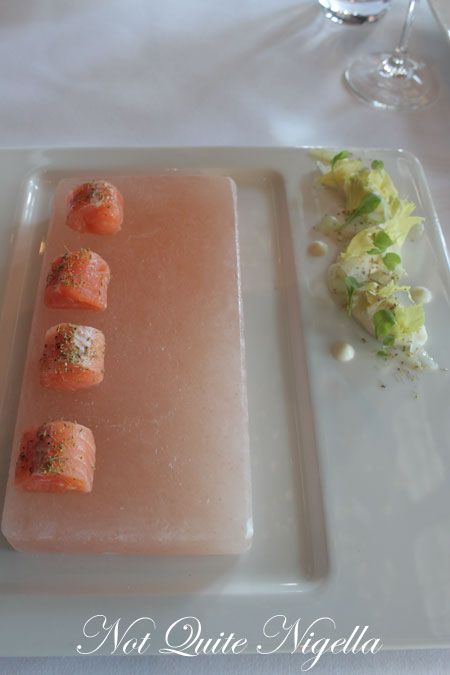 My entree was a most arresting sight. Four parcels of deliciously soft, smoked rainbow trout sit atop a slab on Himalayan Rock Salt. It is also paired with  a celery heart and leaf salad and a rich fennel cream. I ask Jodie about the Himalayan Rock Salt and she tells us that because it is pure rock salt it doesn't harbour any bacteria and they simply wipe it down with a damp cloth although this of course wipes down a layer. It is a useful tool for not only presentation but it can also cure fish if left on it and the slab can also be heated up to 400C or frozen so that it becomes colder than ice. 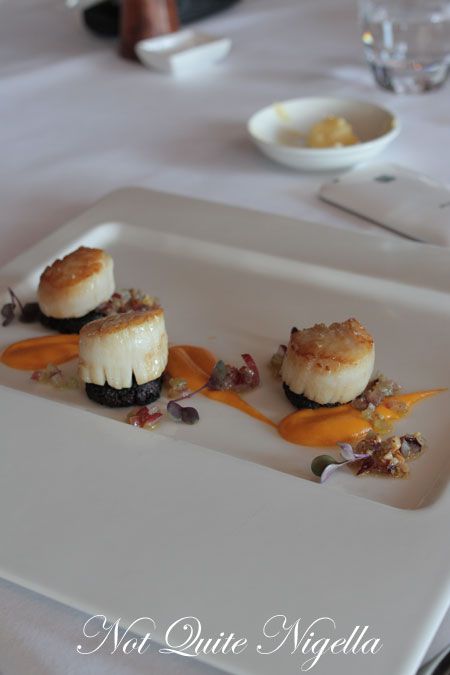 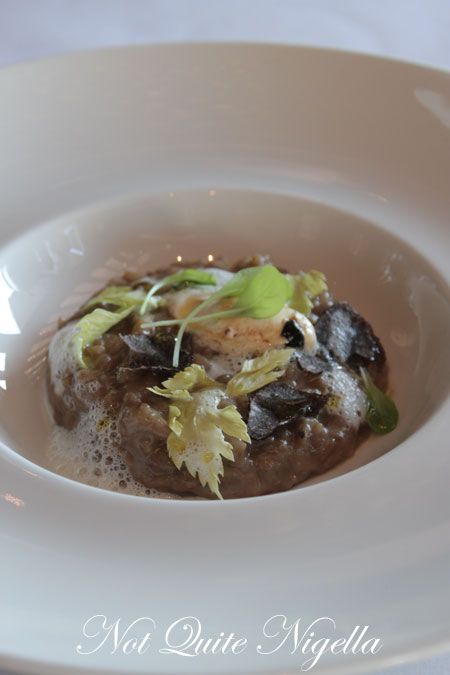 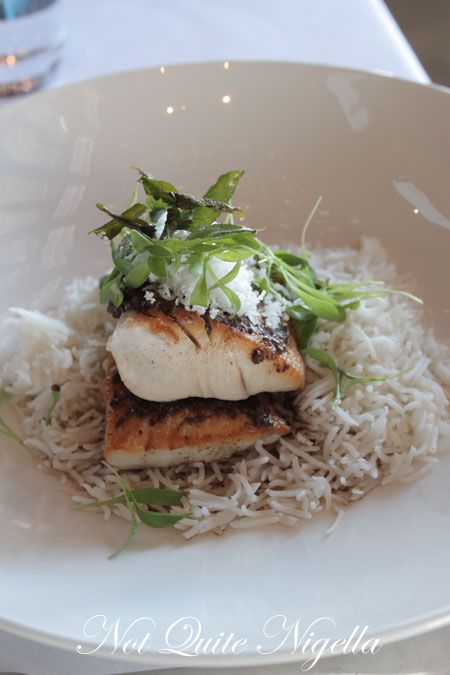 I try some of Michelle's Sri Lankan Kingfish curry and it's delicious. The dahl soup can be sipped separately or poured over the top. Interestingly the super fine long grain is the most premium grade of Basmati rice from Pakistan. Peter tells us that the key to cooking fish here is to only enhance the flavour of the fish and not to overwhelm it and that you should still be able to taste the type of fish you are eating. We discuss how things have changed in the past few years as far as cooking is concerned and he laughs and says "Yes now you have to know what you're talking about (in a class)!" and that you cannot muddle your way through them. 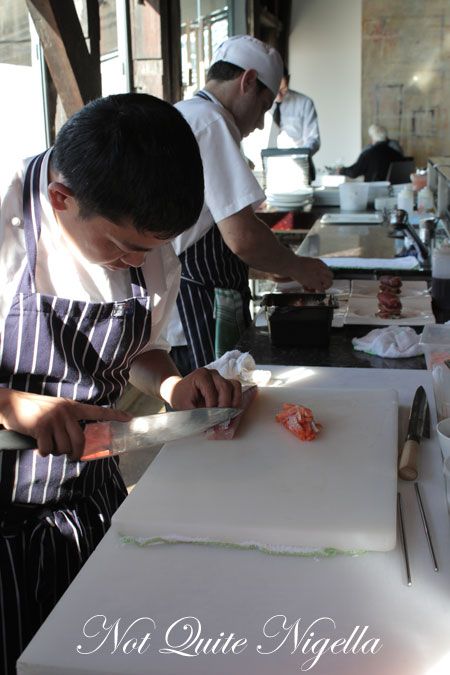 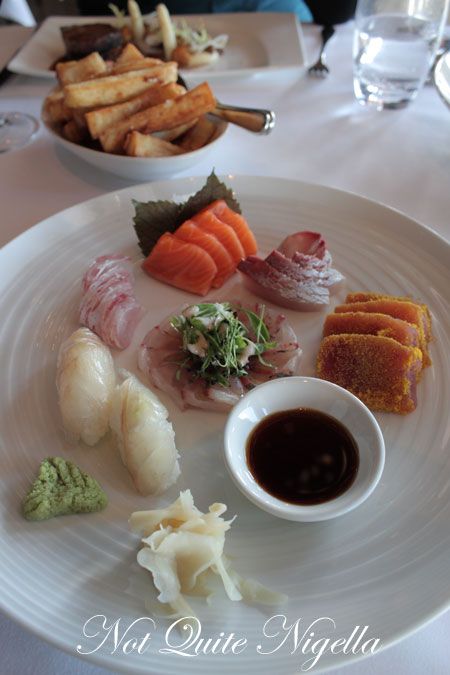 We had watched the sashimi chef Raj slicing up the fish. He has been through the entire sushi and sashimi fish training in Japan which lasts for 10 years so he is well versed in the art of sashimi. On this plate we have a yellow fin tuna which is rolled in dried mullet roe, ocean trout, kingfish, and in the centre is a silver trevally carpaccio with mayonnaise. The two pieces of sushi are a snapper nigiri marinated in sake and salt. All of the sashimi is wonderfully fresh and delicious. 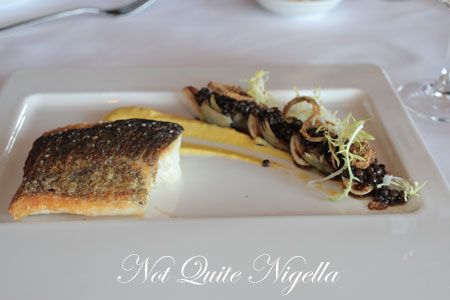 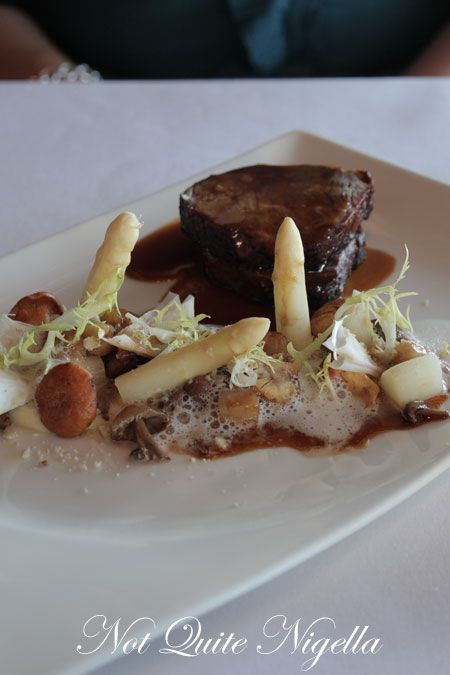 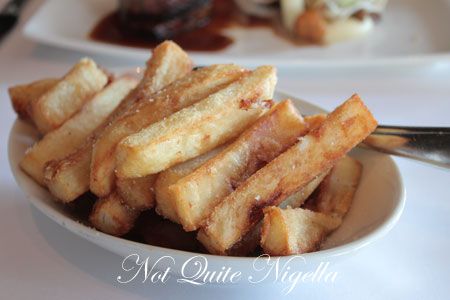 I often find hand cut chips look good but aren't as good as they look but these are lovely and crisp on the outside but incredibly fluffy and soft on the inside. They're sprinkled with the chilli salt and I vow to use this in place of regular salt the next time I make a chips or wedges. 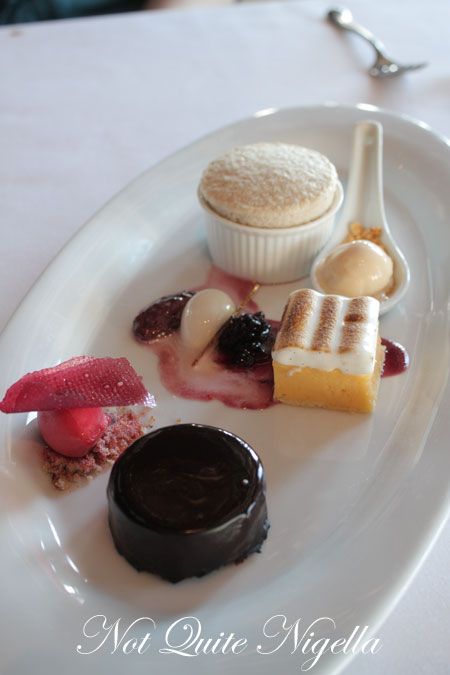 The dessert platter features chestnut souffle with gingerbread ice cream, orange and honeycomb, lemon curd square with caramelised marshmallow topping, vanilla mousse, blackberry, almond and elderflower sorbet. Then at the bottom of the plate there is an Italian Amedei chocolate delice with pecans, champagne and raspberry sorbet. My pick is the chestnut souffle which has that delicate chestnut flavour and goes so well when we tip the gingerbread ice cream and small honeycomb pieces into it. For someone like me that doesn't go for souffles (too one note), this small version is ideal. The chocolate delice is like a rich, chocolatey ganache and the lemon curd square with marshmallow topping is like a small square of tangy lemon meringue pie. And like a bad guest, I have to regretfully rush off vowing to work on my time management so that I can enjoy treats such as this in the leisurely way in which they were intended!

So tell me Dear Reader, do you prefer seafood (surf) or meat (turf)?

NQN dined as a guest of Flying Fish 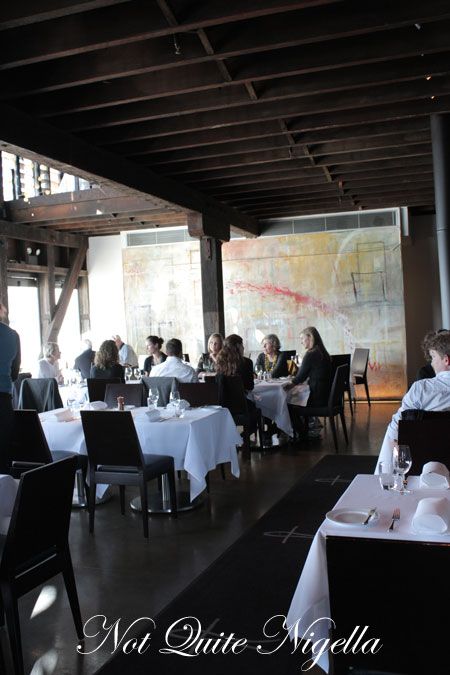 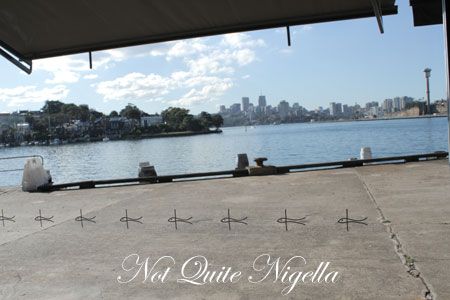