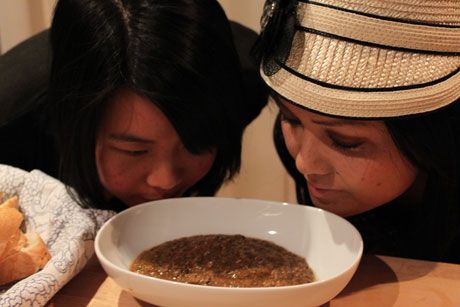 Betty and I doing our best C.S.I. imitations. Photo by Kath from A Cupcake or Two.

Picture this: six bloggers with their friends and or partners huddled around a dish. Some sniff, some look at it from all different angles, some close their eyes and inhale deeply. Then a portion is taken to the table where using a fork each piece is savoured, pulled apart and each minuscule, ground up piece turned over and examined as if under a human microscope. Welcome to a Forensic Eating Dinner party, C.S.I. food blogger style. 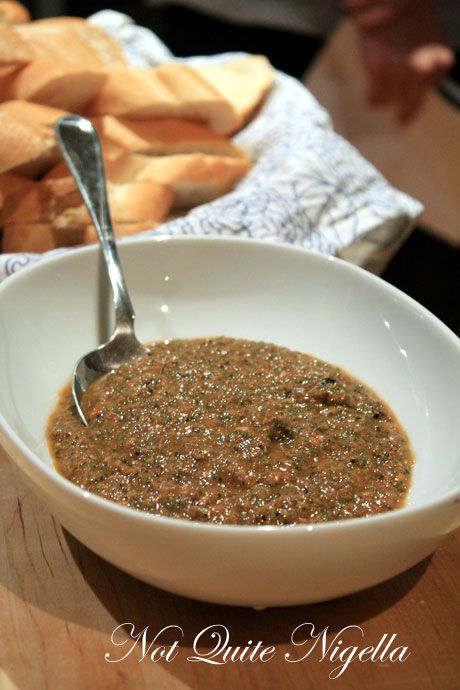 This night we're gathered at Trissa and Dan's house and in attendance are Betty, Kath, Trisha and Richard as well as their friends and partners. I first heard of the term "Forensic Eating" from my friend Liss from Frills in the Hills who mentioned it in a comment on my blog. I then floated the idea of having a Forensic Eating dinner party while we were brainstorming a theme for a dinner party one night at Guylian Cafe and everyone seemed eager to give this a try. Fast forward a few weeks later and we've all brought a dish to taste. A sheet of paper and a pen is handed out to everyone. The rules are simple: forensically determine what is in these dishes using sight, taste and smell. The creator of each dish tells everyone how many ingredients there are in the dish and everyone sets about compiling a list of the ingredients.

You are only allowed to name as many ingredients as the creator says there are in the dish and points are awarded for correct answers (none are deducted for wrong answers). First up is Ellie's dip served with French bread. "The dip has 7 ingredients and no salt and pepper" she says and we get to work. I've teamed up with Mr NQN who loves the idea of a challenge. There is a strong taste of garlic and it reminds me of a tapenade and there's a salty fishyness which screams anchovy. "There's something else in there to give it body" Mr NQN says "like bread and there's also water". I can see parsley and tomato and what I think is olive but he is less convinced about the olive. We come up with a list of 7 ingredients based on both of our guesses. 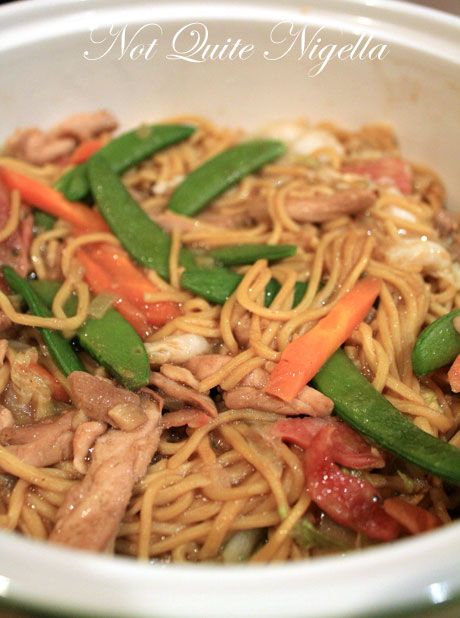 Next out comes Kath's dish, or more specifically Mama Eugenio's (her mum's) noodles. "This dish has 11 ingredients" Kath says counting them mentally. There are some obvious ones like carrot and obviously noodles (points are deducted if you couldn't figure that one out), Lup Cheong or chinese sausage, sugar snap peas, wombok and chicken as there are clear pieces of each. However we have trouble coming up with 10 ingredients. 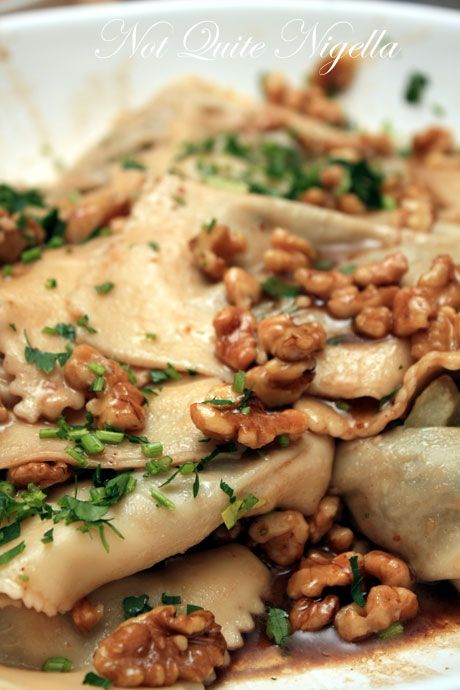 Trissa's ravioli is up next. There are 12 ingredients including the ravioli ingredients. At first glance it's covered in walnut pieces and balsamic and we can guess the ingredients to the pasta are flour, egg and water. When she first cooked the sauce I could smell the amazing aroma of browned butter so I could tell there was butter in itand I could see little pieces of eggplant and I think mushroom too. Mr NQN thinks that there is spinach in it too and I guess the cheese to be ricotta. 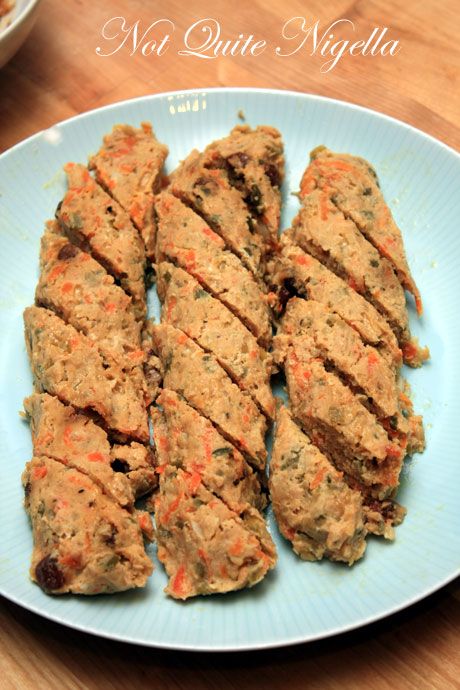 Trisha's dish comes up next and it's a Filipino one. It's a perplexing one. I can definitely see some items like sultanas and carrots but there's a curious item in there which is a green item that Mr NQN prises apart and separate and examines on his fingers. 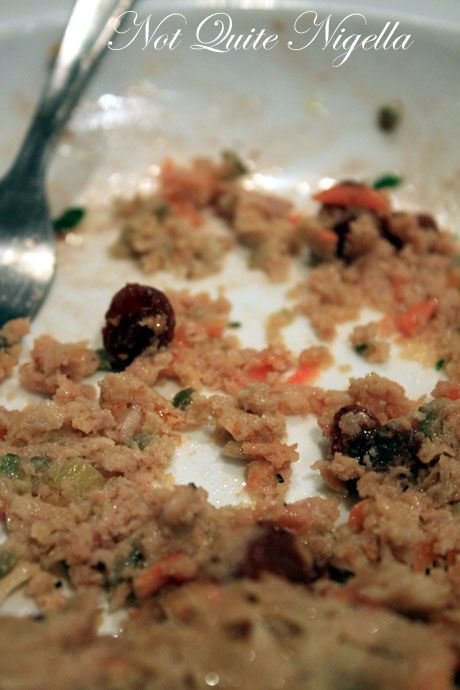 The tiny green speck is sweet and she tells us it's what gives the dish sweetness so after a great deal of deliberation I hazard a guess at sweet pickles. This one is hard as things tend to be minced up much like Ellie's dip and Trissa's ravioli filling which makes it hard to identify things by shape or eye.  Mr NQN thinks there is tuna in there but I am feeling more pork so I put down both. 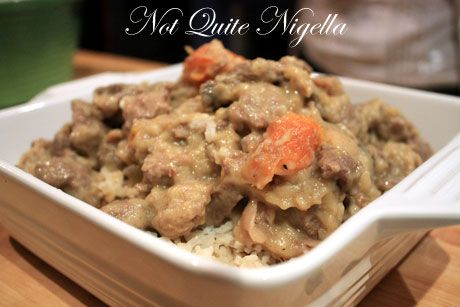 My dish is up next. I firstly apologise for the look. It's a stew so it's not the prettiest of items and it was made a couple of hours ahead which meant that the sauce somewhat evaporated. Mine has 8 ingredients plus salt and pepper so I figure it might be easy for people to identify it and the chunks of carrot and onions and meat are clearly visible. 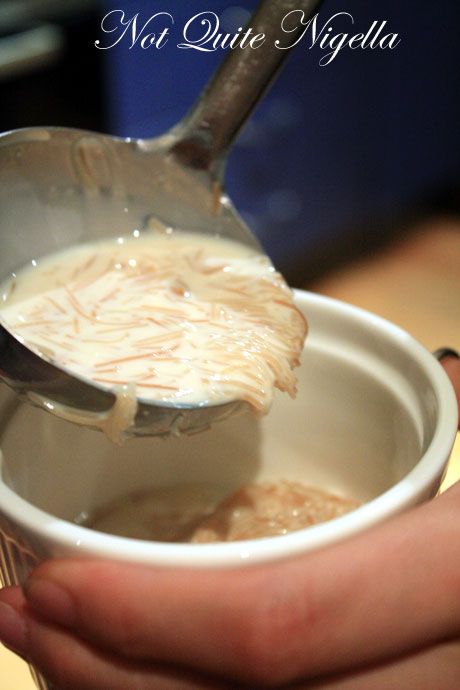 Last is Betty's dessert, and we've actually had something similar at a Nepalese banquet so we are at a slight advantage. There are vermicelli noodles, milk, sugar and a nut which we have to examine as it has an unusual texture. Trissa has a larger piece of nut and shows it to us and it's an almond. I also think there's a little saffron due to the yellow shade. 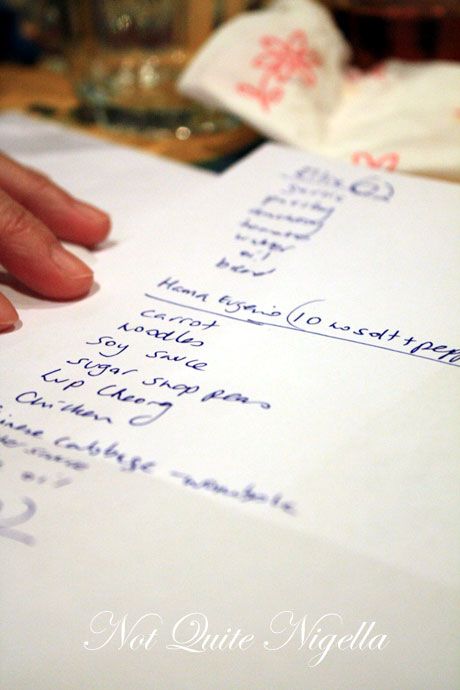 And now for the reveal... 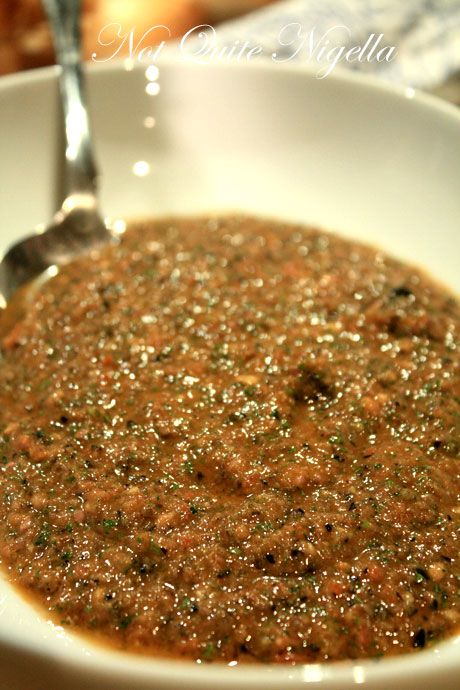 With our pieces of paper ready, everyone reveals all of the ingredients that are in their dishes. There is an Anchoiade, a French dip made up of garlic, parsley, anchovy, tomato, oil, lemon thyme and olives . I've guessed 5 out of the 7. Mr NQN's guess of bread and water are the only wrong ones and the two missing ingredients were lemon thyme and olives (and yes I wish I had left olives in). 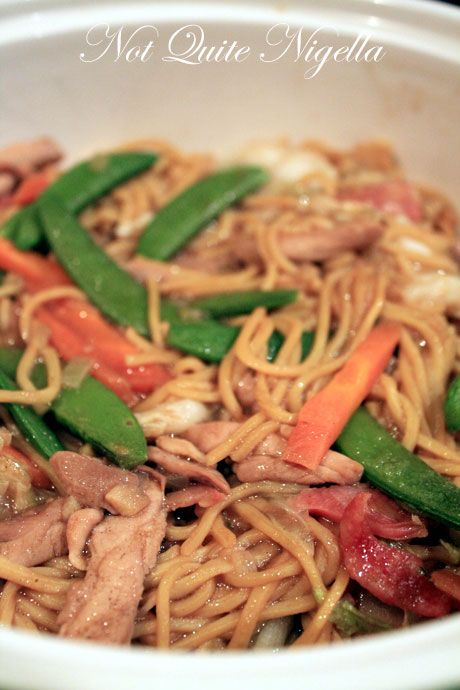 Kath's mum's noodle dish Pancit Canton is then revealed. The ones we got correct were carrot, noodles, sugar snap peas, lup cheong (Chinese sausage), chicken, wombok and oyster sauce. I thought that soy and sesame oil were used but they weren't and I didn't realise that oil was being counted too so I got 7 out of 11. I missed out on the obvious ones like garlic and onion (so dumb!) and chicken stock. 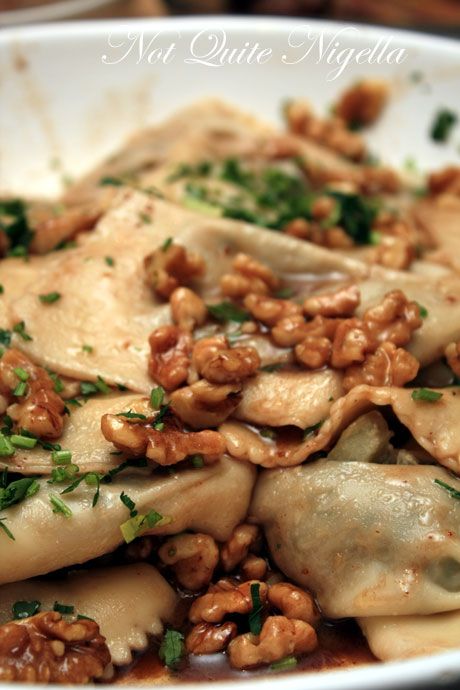 Trissa's ravioli was the next reveal and of the 12 I only got 7 correct. I guessed correctly for walnuts, flour, egg, parsley, balsamic, eggplant, butter but didn't realise that water wasn't being counted (to make the pasta) and got the cheese wrong (I guessed ricotta instead of tallegio which most of us did). I also thought that mushroom was another of the ravioli ingredients but it was just eggplant. Richard and I were convinced there was coriander but it was parsley and Mr NQN's guess of spinach was incorrect. This one ended up confounding a few people. 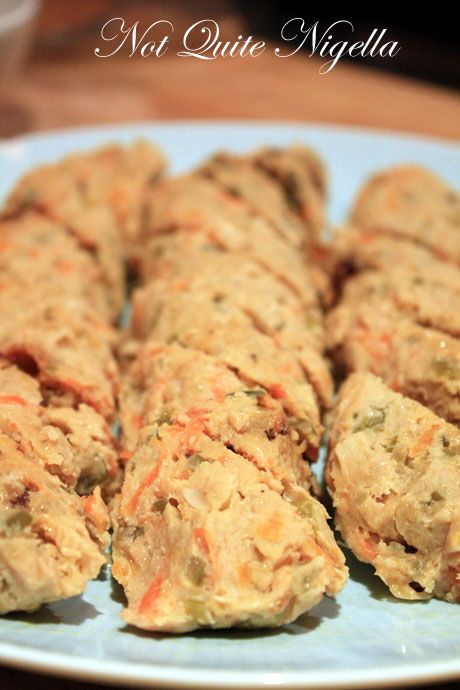 Trisha' Filipino dish was then revealed and the ingredients I tasted correctly were sultanas, egg, carrot, pork, garlic and the sweet pickle. It was the hardest for me and I only got 6 out of the 12 ingredients. I said onion instead of spring onion and the tuna was wrong (hmm I was starting to doubt partnering up with Mr NQN at this stage ;) ). 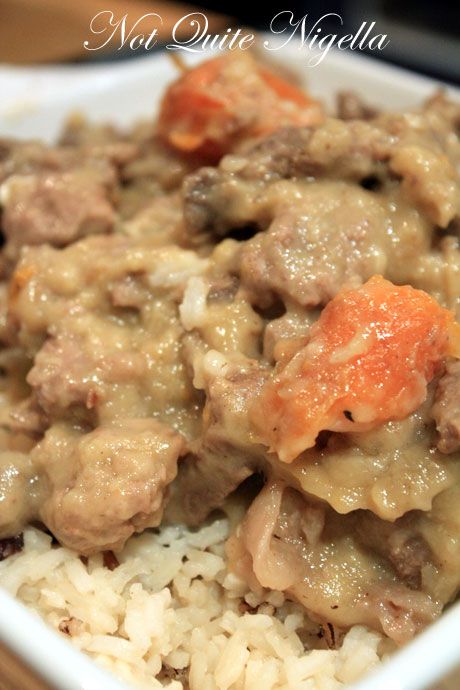 My item which I was convinced would have been easy due to the small number of ingredients actually stumped many. It was a Blanquette de Veau (recipe to come soon) and it had veal, white wine, carrot, onion, bouquet garni, butter, flour and  an egg yolk. In retrospect I guess many would have thought it was a cream sauce whereas it was a blonde roux and many got around 2 out of the 8 ingredients. 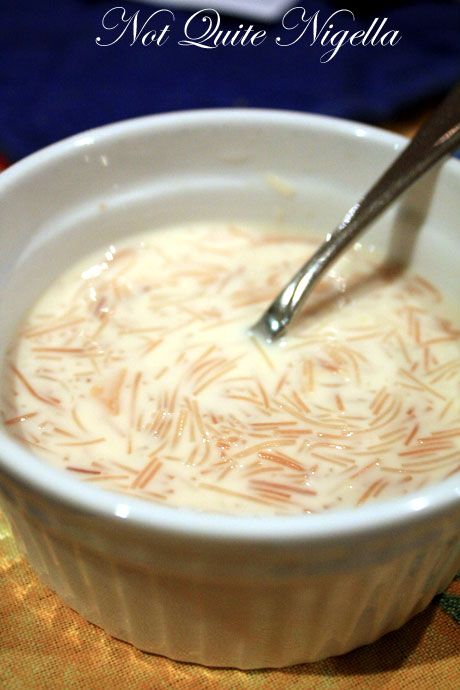 Betty's dish was a Semiya Kheer, an Indian dessert with what I tasted to be vermicelli noodles, milk, sugar and yes almonds. My guess of saffron was incorrect and the other missing ingredient was ghee. I got 4 out of the 5 ingredients in this one-phew!

Tallying it up was going to be hard. If we counted up straight numbers of points then some would be advantaged if they had a fewer number of ingredients in their dish so we settled on judging the number of firsts i.e. who guessed the highest number of items in each dish. 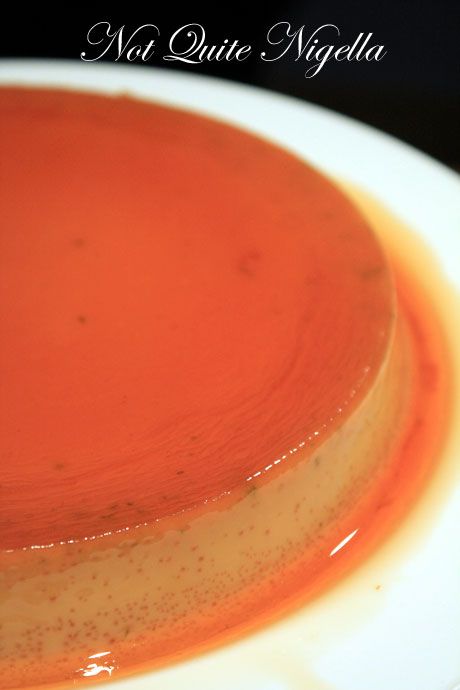 We then set about eating the rest of the desserts including a gorgeous leche flan from Kath (I could stare at that all day long). 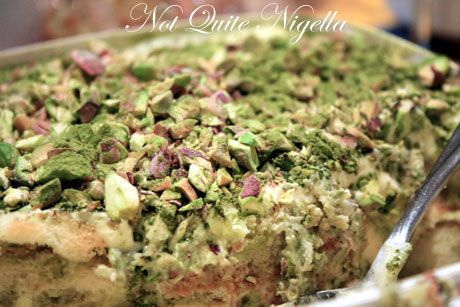 A green tea and pistachio tiramisu 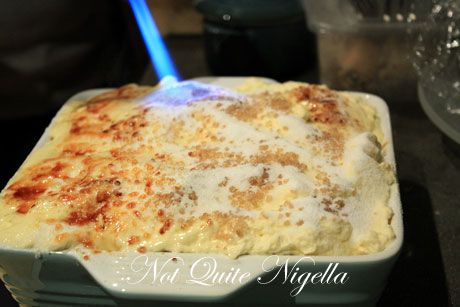 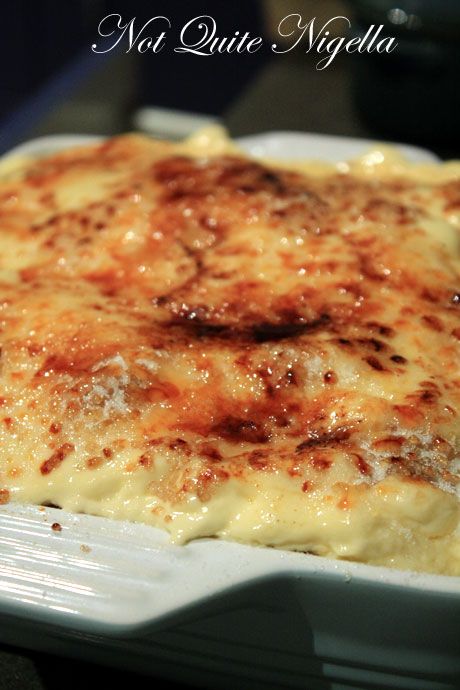 You know you want to see what's under the toffee don't you...take my hand and come have a look. 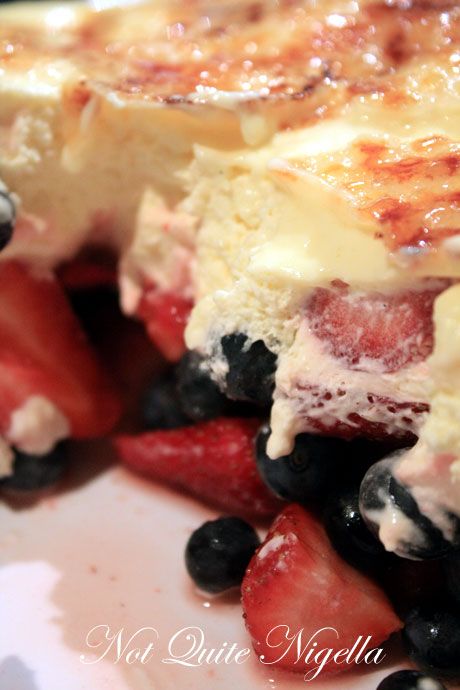 It's luscious berries! So simple but so gorgeous!

Special thanks to Trissa and Dan who opened up their lovely home to our special brand of crazy and for a great night.

So tell me Dear Reader, which sense do you think you'd rely on most in a Forensic Eating challenge? Sight, smell, touch or taste? 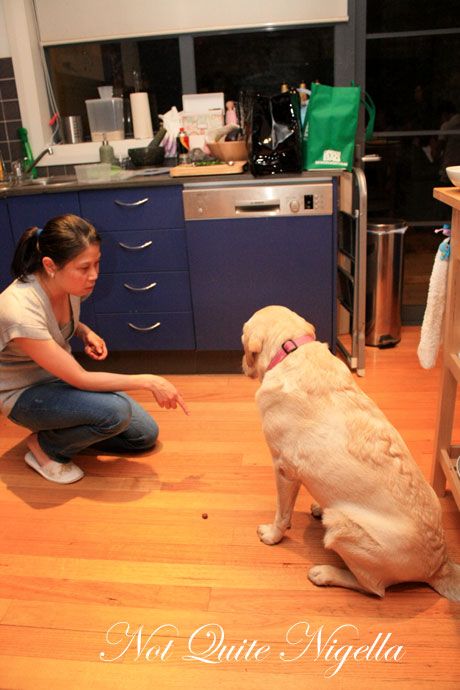 The intermission entertainment: Trissa and her dog Baci doing tricks.