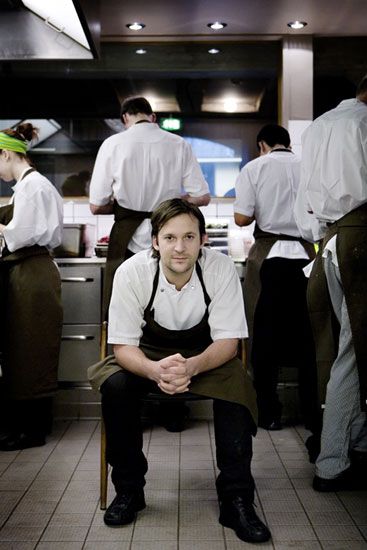 I was coughing, spluttering and the warm Spring weather had turned colder. I was dying to go to the Opera House to hear Rene Redzepi speak and I was clutching my invitation with a frail hand and whilst the mind was willing, the flesh was weak. I was chatting to my friend Liss from Frills in the Hills lamenting my illness and on the spur of the moment, I asked her if she would like to go in my place. Thankfully she's a dear and she kindly offered to guest post in my place. Without further ado, here is the fabulous Liss's guest post on Noma Chef Rene Redzepi at the Opera House. I hope you enjoy reading it as much as I did :)

As I head up the Opera House concourse I suddenly catch myself. What am I doing here? Do I belong here? I approach the doors, Helen Greenwood from the SMH to my right, I walk up the stairs. As I approach the large crowd assembled it is pulsating with a buzz and you can feel the excitement.

I decide to go to the bathroom. Kylie Kwong, swings past me on her way out, this feels surreal  as I walk out again I glimpse Mark Best from Marque, I internally gasp. Wasnt I just in Ikea this afternoon? I looked down at my hand, yes, I still had the ink from the Small-land drop off on my hand. This is a little bit surreal. Do I belong here? I have Wiggles band-aids in my purse!

Whats equally surreal is who Im about to listen to. Im here to listen to Rene Redzepi -His restaurant Noma has been named best restaurant in the world by the San Pellegrino. I find my seat at the glorious Opera House  designed by another famous Dane, Jørn Utzon. Set in Copenhagen, the Netherlands, Noma seats only 40 and receives reservation requests of over 1,000 a week. You can imagine what the waiting list is like. 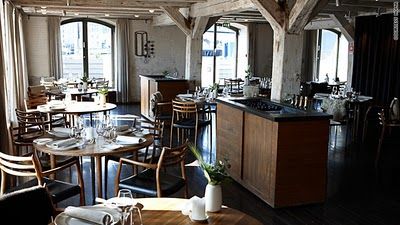 Has Princess Mary dined at Noma?  Strangely has been the most popular question posed to Rene since his arrival in Australia.  I believe she may even be on that waiting list!

Rene appears. He appears like he just stepped out of Ralph Lauren advertisement (note from NQN: ladies, he married-sorry! :P). Swept hair across his face, blue blazer, untucked dress shirt, straight pants and white, white, white sneakers. He seems down to earth and immediately I am less overwhelmed and more in awe.

Rene who co-owns and runs the top restaurant in the world is thirty-two years old. THIRTY-TWO. At the age of 25 wanted something different for his restaurant; he wanted to get back to what real Nordic cuisine was. And were not talking about pickled herrings. But he really didnt know what it was. So he started his research by reading historical references to what was eaten in the days before food became industrialised. He contacted the authors of these books, in turn they put in him touch with those who purveyed the food sources. He quickly built a network of local suppliers. 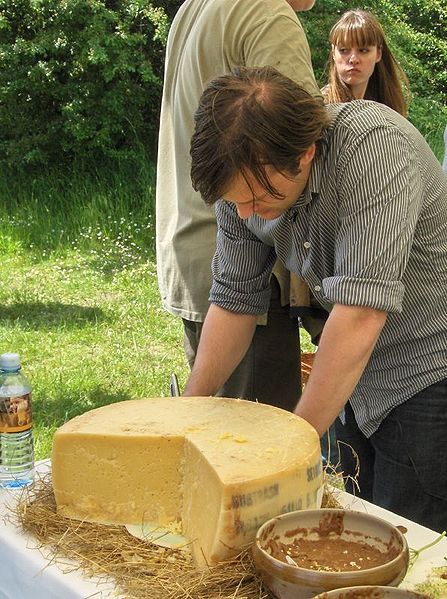 Next he started his education. He discovered just in his local area there were 59 different type of berries, 1,000+ types of edible mushrooms and a local supply of sea-urchin, which he had always imported from France previously. He also discovered a local supply of razor clams and over 60 other types of shellfish readily available to him.

It was like a new world, and his vision and dishes came together. A lot of experimentation, using only produce that was readily available to them from their region meant they had to get creative, and creative they are. Nomas plates are elegant and refined looking, and with ingredients you may have not even heard of, let alone tried. The dishes are designed so that neighbouring ingredients from the land or seas are accompany each other on the dish  taking the locavore approach just that one step closer. Rene showed us a video of how he came up with a dish of white asparagus grilled with spruce and then placed on a bed of green asparagus sauce. The spruce tree overlooks the asparagus crop. 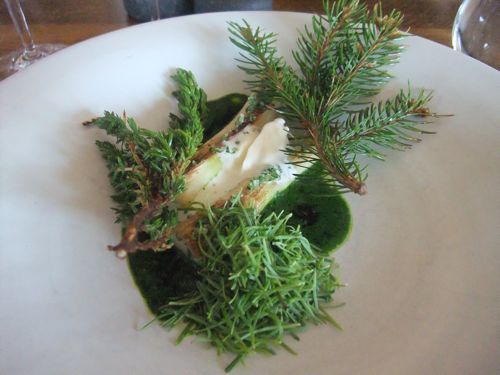 Photo from _Food and Wine Finds_

With great warmth and humour, Rene tells us how he started his journey to the top. When he first opened his restaurant 7 years ago, the initial feedback he got was crazy. In fact, he had customers demand: 'Book us into a REAL restaurant, NOW!'.  Rene refers to these people as 'the stupid people' and this resonated cheerfully with much of the crowd when he conveyed the other traits of such 'stupid people' who have allergies to this, and that, the increasing amount of people who seem 'allergic to white flour' he suspects for weight loss reasons.  He says this with his tongue firmly in his cheek, yet somehow you get the feeling at least part of his feelings for these 'stupid people' ring true.

So Rene may have been considered 'crazy' ....

Rene believes that you dont need fancy linen or over-the-top pompous staff. Noma has no silverware and in fact one of his most famous dishes is tartar and wood sorrel, which is eaten with your fingers  he says most people are at first a bit repulsed by the idea of eating raw meat with their fingers, but once they start eating, their inhibitions are lost. Nomas philosophy is remove as much as the industrialisation of food as possible and allow the customer to focus on the dish. 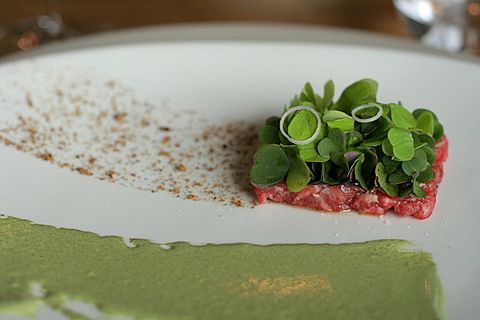 Rene Redzepi has re-defined Nordic food  he is regularly touted as the pioneer of New Nordic cuisine. He admits though, whilst hes wining and dining on the other side of the world, his tight team of eight chefs are working hard, and without them, Nomas success would not have been possible. He describes them as his orchestra: when a drum is missing, its just not right, you need all the pieces to come together to make it work. 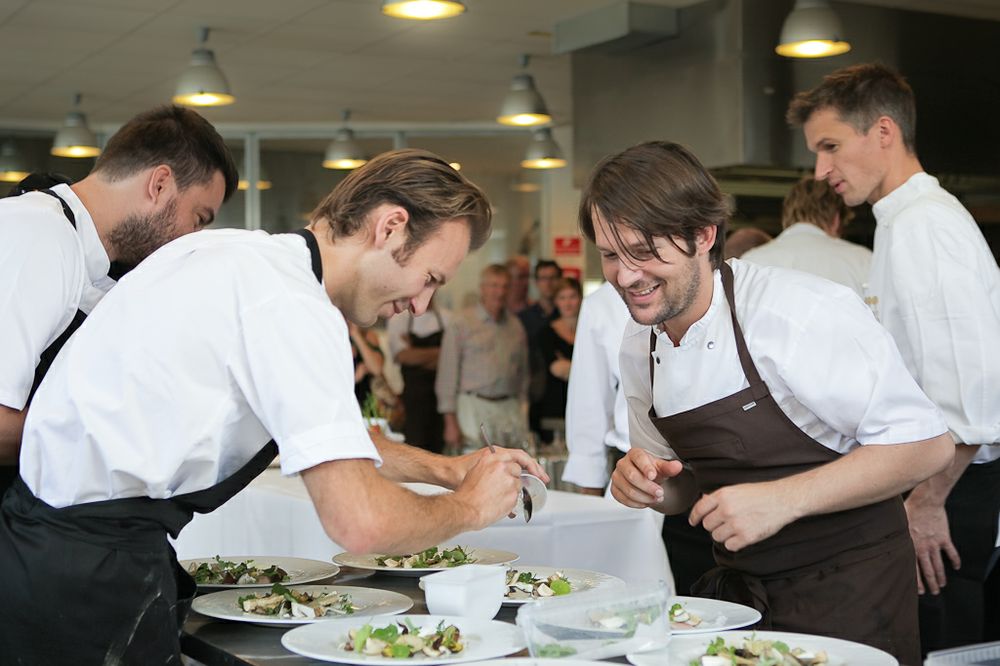 I suppose that is the secret  the right orchestra, local inspiration and a great sense of humour ! Something as a thirty-something food-loving Mama of three who is passionate about slow food really related to. I belonged here. I enjoyed it, I learned something and was inspired, Im sure like every foodie in the Opera House Concert Hall.

So tell me Dear NQN Readers, share with me a local ingredient to you that you love to cook with?  Or perhaps one that you would like to try?

Liss attended the talk as a guest of Phaidon Books. Rene was guest of the Crave Sydney International Food Festival and brought to Australia courtesy of Phaidon Press who also publish his book Noma here in Australia. Noma the book by Rene Redzepi can be purchased by pre-order direct from Phaidon.