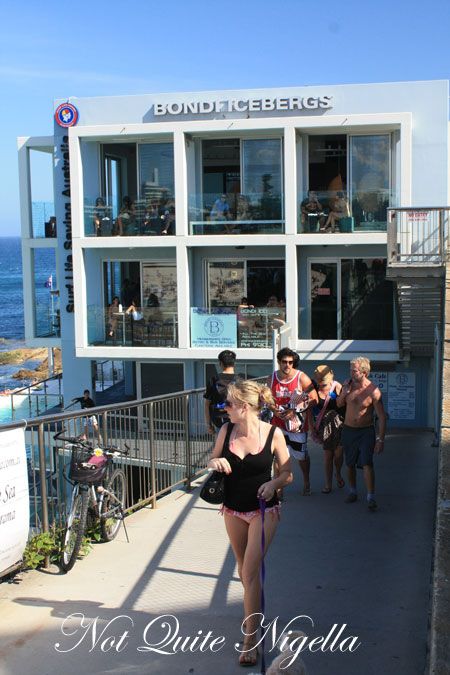 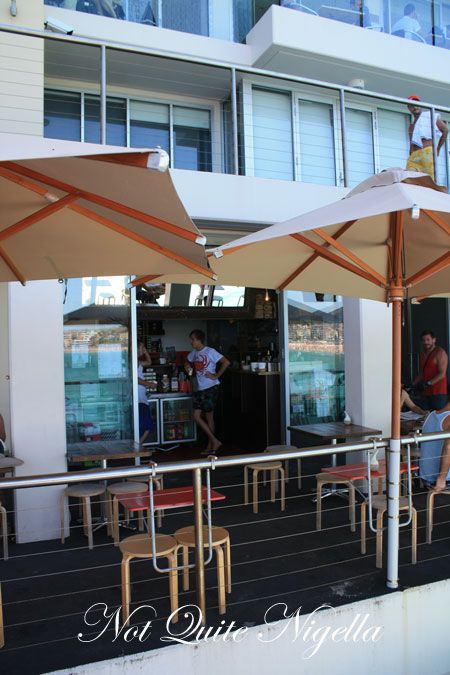 When M, her boys and I took a walk after our little stint at Bondi FM Cafe we walked all the way up to Notts Avenue at Bondi Beach. For some this is where you go upstairs to Icebergs, the bar and restaurant or those eager for a swim can go downstairs to the Bondi Icebergs Swimming Pool. Someone had once told me that membership here cost a mint and so being a very incompetent swimmer, I never thought much more about it. Until that day when we go downstairs and have a stickybeak. For just a few dollars you can bathe and play in the famous Icebergs pool along with other Bondi bodies. We make a plan to go back that coming weekend now that we finally have some clement weather. 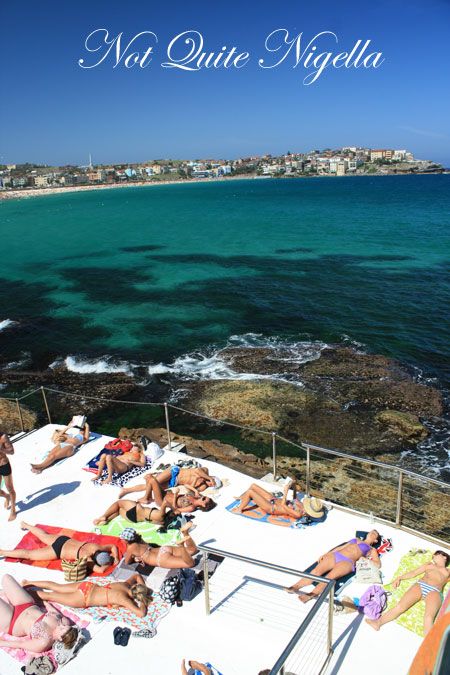 Somehow we manage upon a miracle park - one on Nott Avenue just outside the entrance and we walk in and pay for entry to the pool ($13 for a family 2 adults and up to 3 kids, $5 adults, $3 seniors and children). There's so much to see here, from the two pools, one for laps and one for frolicking and then there's the human scenery. Bronzed gods and goddesses with some refreshingly normal looking people all in a colourful variety of bikinis (and make no mistake, it's all about the bikini here, no matter what end of the size scale you may sit on). There is a gymnasium, sauna and massage section which appears to be busy. 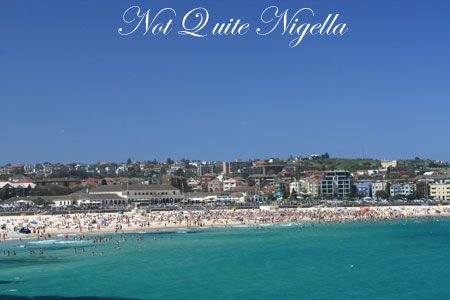 The water is beautiful and blue and across the rocks is the ocean where surfers paddle in the hopes of catching a big wave and the safety helicopters fly overhead every once in a while trying to spot sharks. And then there's the food at The Crabbe Hole, the little kiosk which could have served overpriced fare but doesn't. It's not fancy, a it's a tiny (crabbe) hole in the wall but they're trying hard and starting with good quality suppliers like Sonoma bread, The Little Marionette Coffee, Penelope Sach Herbal Teas, Zumbo Banana Bread and Pat & Stick's Ice Cream. 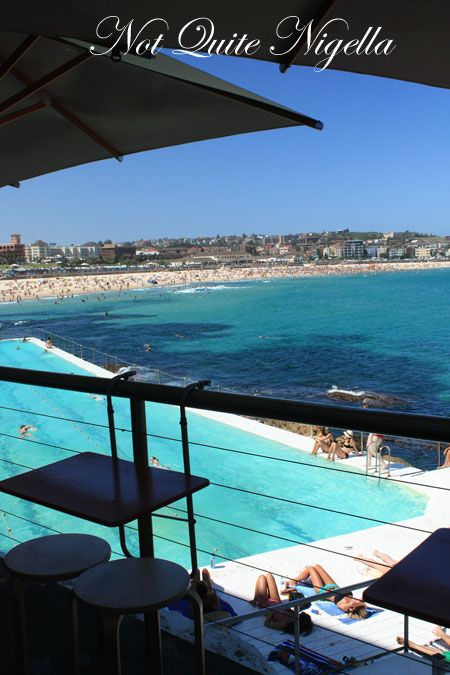 This Sunday afternoon M and I take a seat at the kiosk seating which is the only part really under cover and we order some lunch while the boys and Mr NQN hit the water. I start with the Chai. There's a mix of light meals including sandwiches, bread topped with agave nectar and ricotta, protein shakes and prebottled Emma & Tom juices. Byron Bay bliss balls, muesli cookies etc round out the small but reasonably well priced menu. The staff are friendly and easygoing and in between serving, some come back after having a dip in the pool. 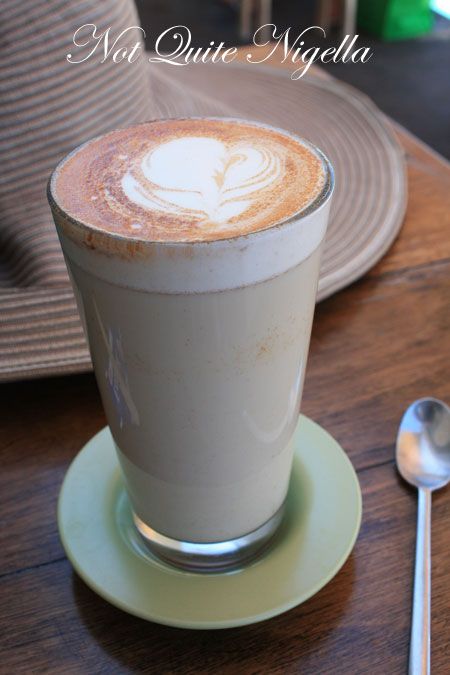 The chai smells like honey and cinnamon but tastes a bit watery. M tries it and says that it tastes like a packet one. I'm a bit underwhelmed by it as the taste doesn't quite match the ambrosial aroma. 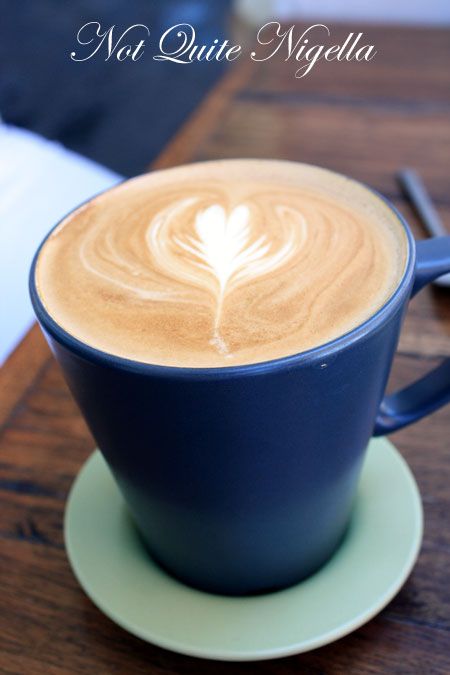 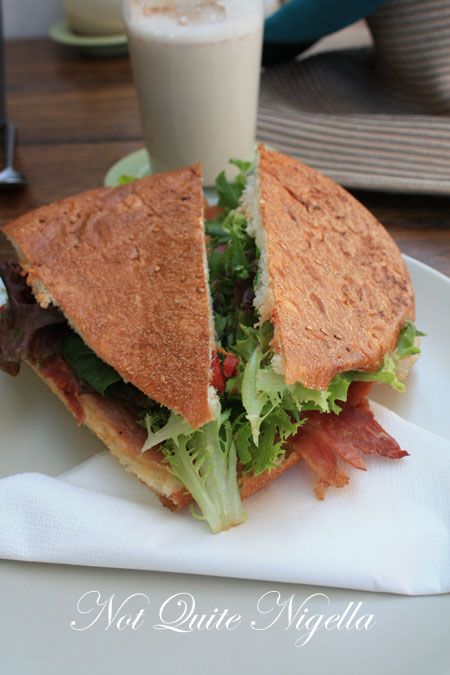 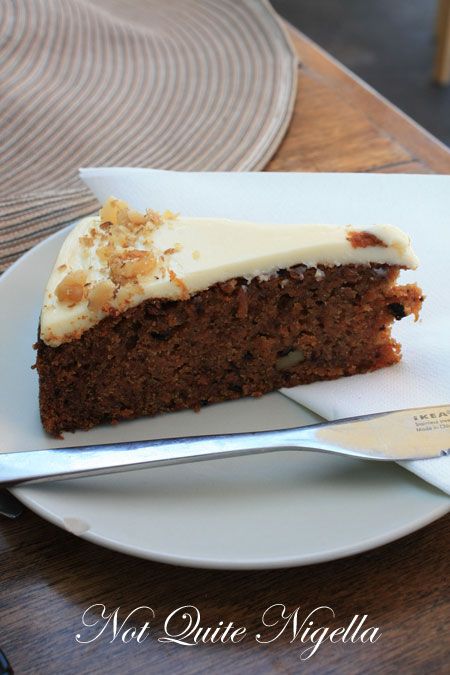 There's no Banana Bread so they offer me a slice of carrot cake. "Is it homemade?" I ask and they tell us that it's made by a home cook who supplies them with baked goods. "Excellent, I'll take it instead then". The cake slice isn't one of those giant gargantuan portions, iced in the centre and towering. It's a more modest, home baked looking cake. It's lovely and moist throughout almost like a date pudding but perhaps missing some of the key aromatics in carrot cake like cinnamon and nutmeg. Still the texture is undeniably moreish. 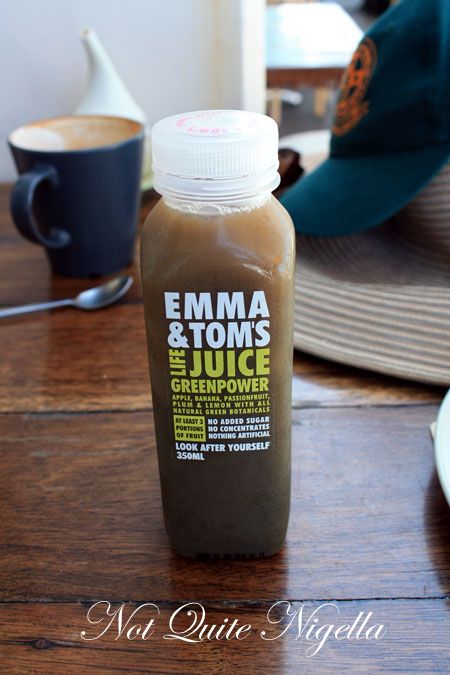 Despite the rather grim appearance, the juice is thick and delicious with apple, banana, passionfruit, plum and lemon as well as spirulina and other green but usually rather gruesome tasting things being (thankfully) masked by the fruit. 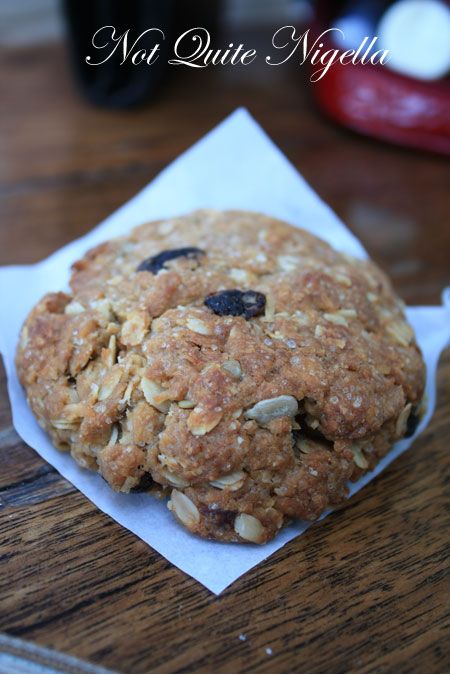 S and In need to fill up their tummies with something healthy and filling so they each get a Muesli Cookie. I have a distinct memory of muesli cookies -  they were horribly dry and could be used as a small weapon in cases of emergency. These are anything but and are filled with generous amounts of coconut and dried fruit to give it moisture and it's a heavy stomach filler for the boys after swimming for a few hours. 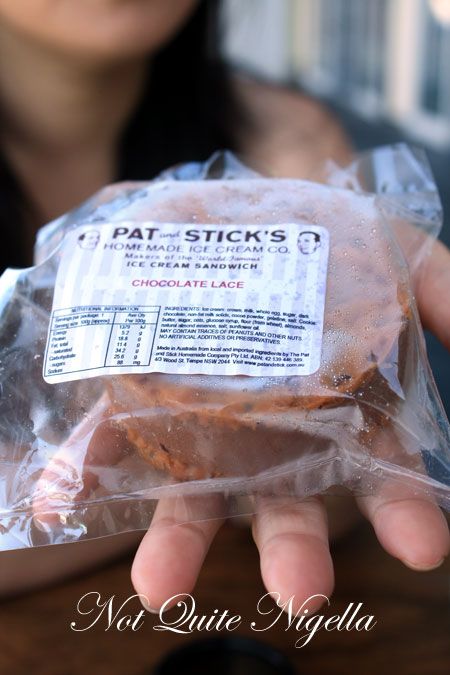 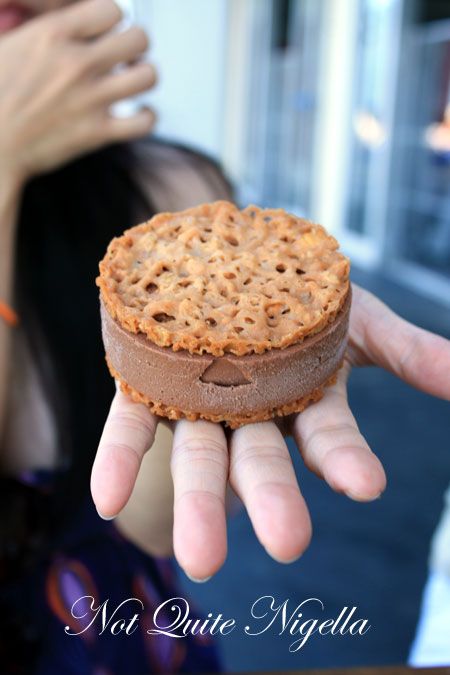 I do love Pat & Stick's Lace Ice Cream Sandwiches as I adore brandy snaps and similar buttery crunchy biscuits. This is all about ratios. The thinnest holiest biscuit on the outside, perfectly crisp so that you know that it's there yet thin enough to yield easily when biting into it so that the Belgian chocolate ice cream filling doesn't splay out to the sides. And yes this is the kind of thing that we talk about when eating these ice cream sandwiches :P 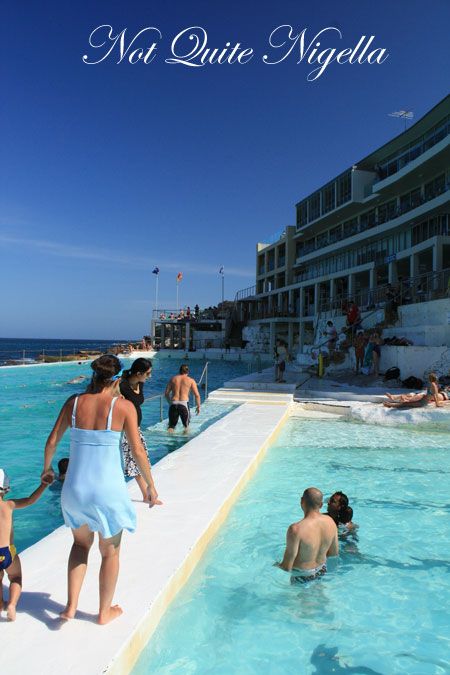 The boys both young and adult are starting to get restless, the sun shifts west so many sunbathers leave with the sun. The umbrellas go down and we bid goodbye to the billion dollar view.

So tell me Dear Reader, do you prefer swimming in the ocean or in a pool and are you a bikini/one piece or boardies/budgie smugglers kind of person? 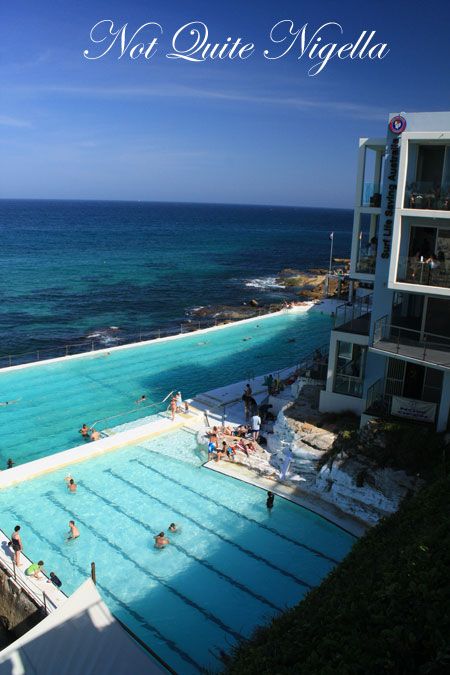 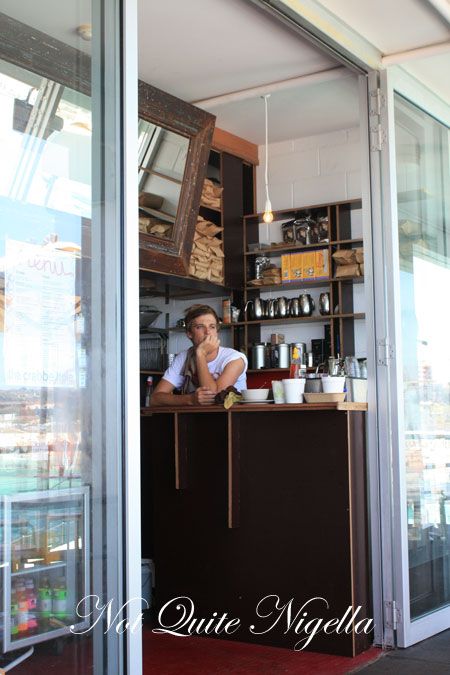