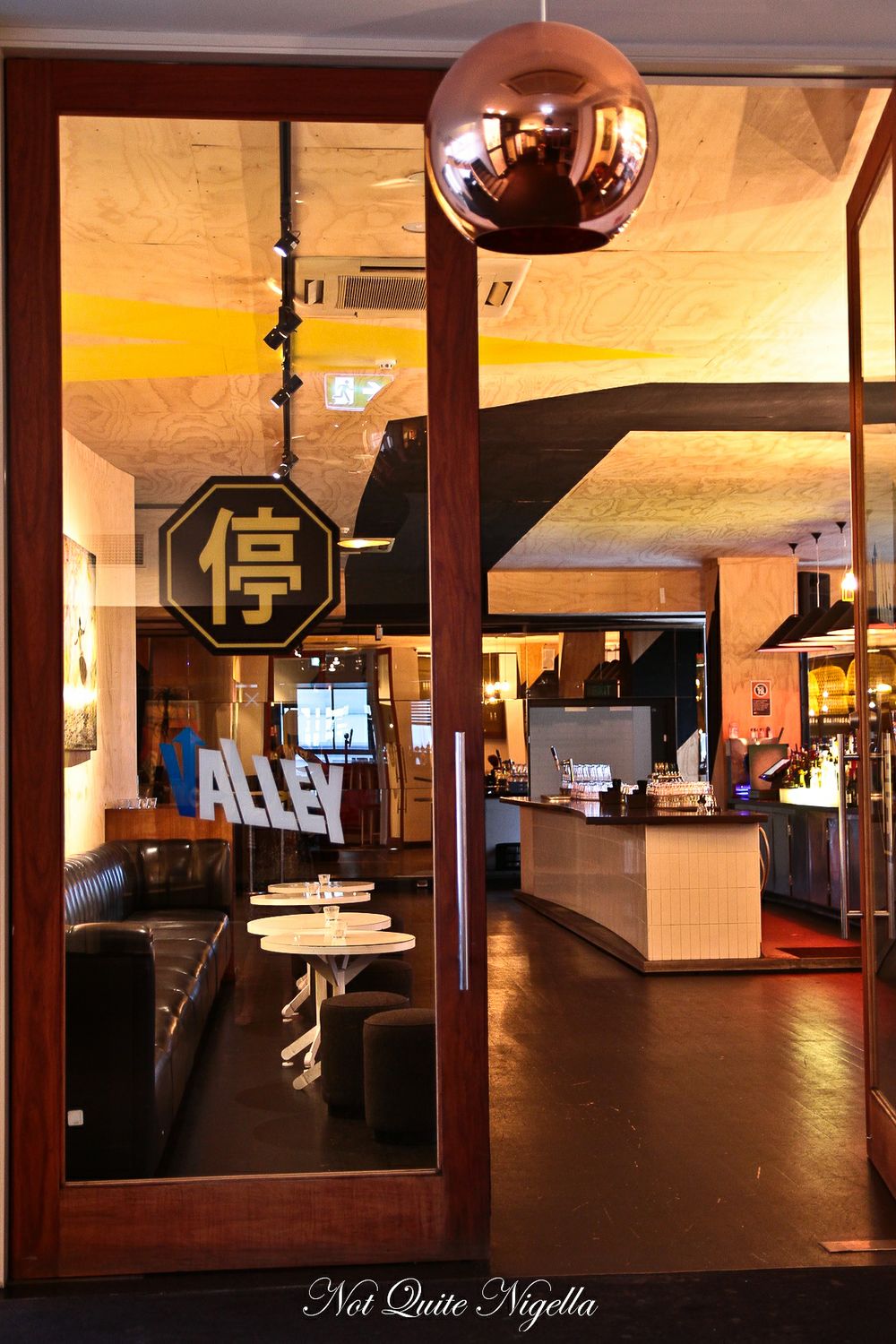 When all else fails, bring fried chicken. 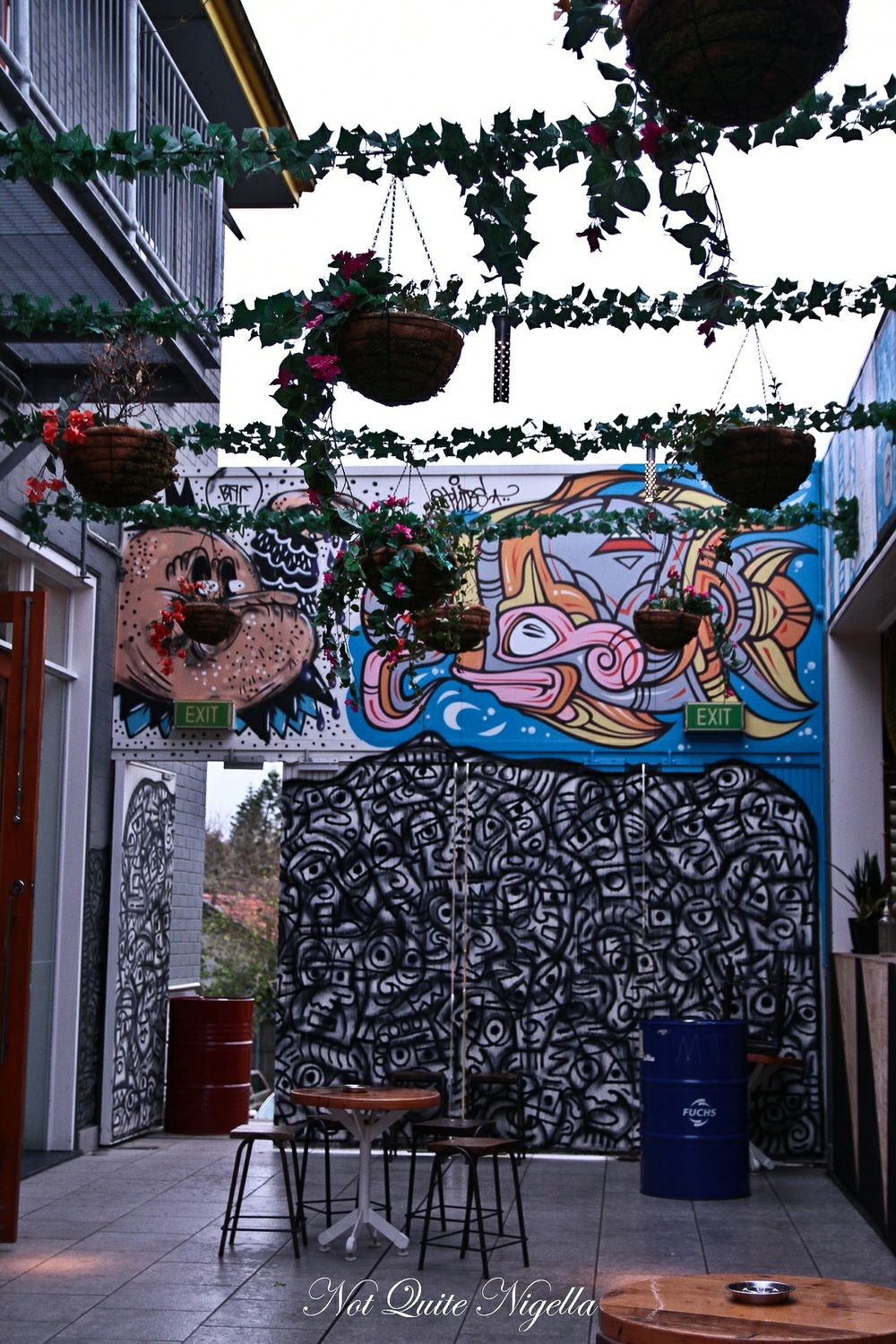 Well that would be Eat Art Truck's chef Stuart McGill who has branched out into more casual permanently located dining with his food truck. Truckstop in Bondi Beach, on the first floor of the Bondi Beach Hotel serves up similar food in a permanent location. First opened in September 2012,the menu was quite different to this very recent revamp which reduces the number of offerings to a smaller number. After an exhausting weekend day which sees us traipsing across Sydney to buy gifts and Mr NQN's younger brother Manu moving house, we just want something quick and simple. And let's be honest once I heard fried chicken I was a goner. I tried ringing to book on the only mobile number given and nobody answered although someone called me back later. 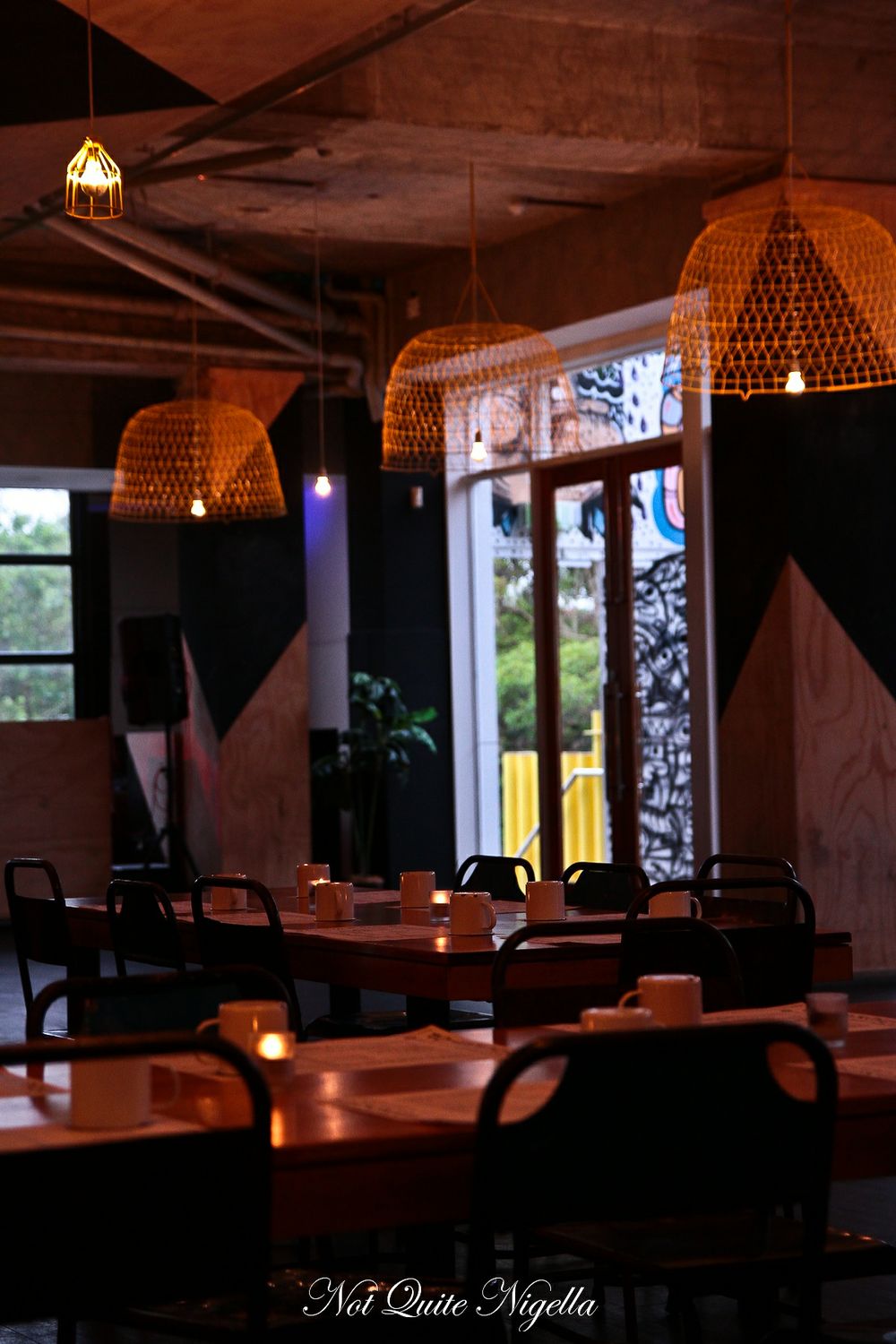 There's a miracle two hour park just opposite the hotel and we take that as a sign. I recognise the familiar kanji which means "stop" in Japanese and we go upstairs. At 7pm there are just a few tables of people and it's an enormous space that is decked out to look like a truckstop-well a glamourised version. To be totally honest I've only seen truckstops on television shows and usually crime shows where there are prostitutes and murders. Maybe I need to change my television diet... 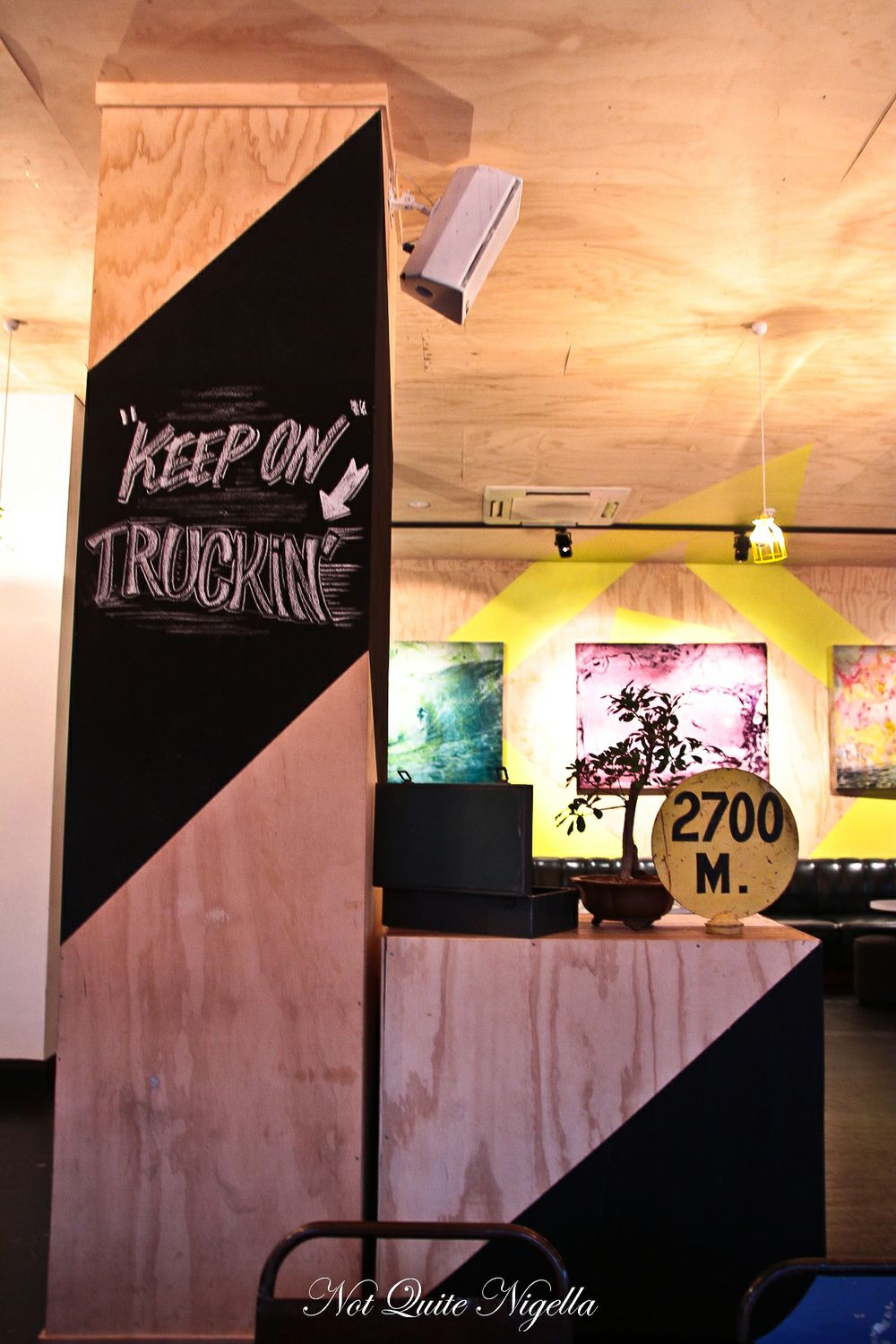 This one has oil cans, road signs, spray paint tins (for the art work) and a plywood and concrete ceiling. Chairs are metal and cups and plates are enamel. The familiar graffiti by graffiti artist Phibs is displayed on the outside courtyard area and that is also where you place your order and pay and take your bucket with cutlery and napkins to your table. I go to the counter to order. 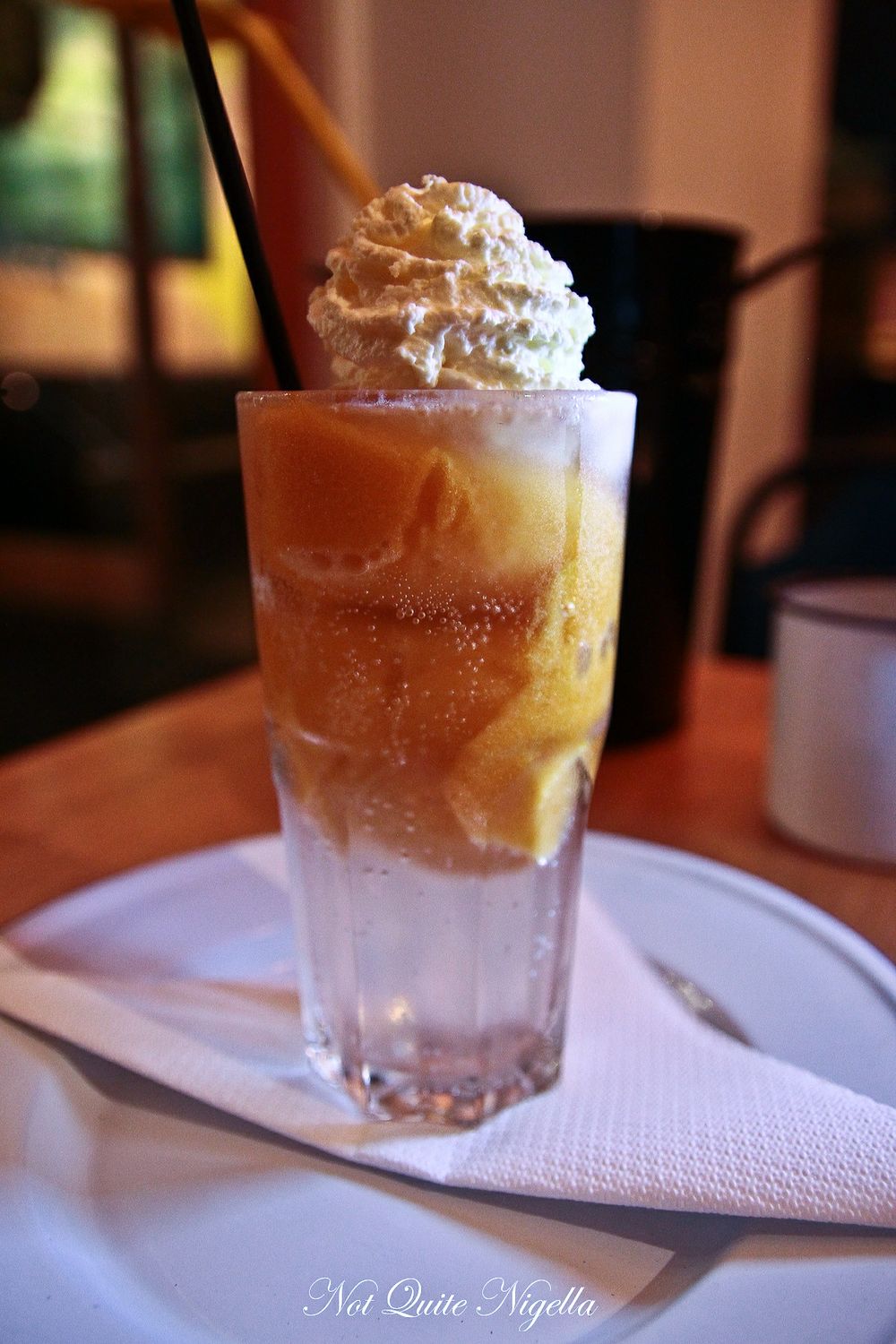 Under the desert menu, there was a touch of confusion when I wanted to order this as they originally told me to go to the bar to get this but it turns out that you order this along with the food. There is a bottom layer of lemonade, very much tasting like Japanese ramune and a thick layer of mango and coconut sorbet as well as cream on top. There was quite a lot of the unusually textured, almost jelly-like mango sorbet that it was hard to mix the two parts together like what you would do traditionally with a spider. 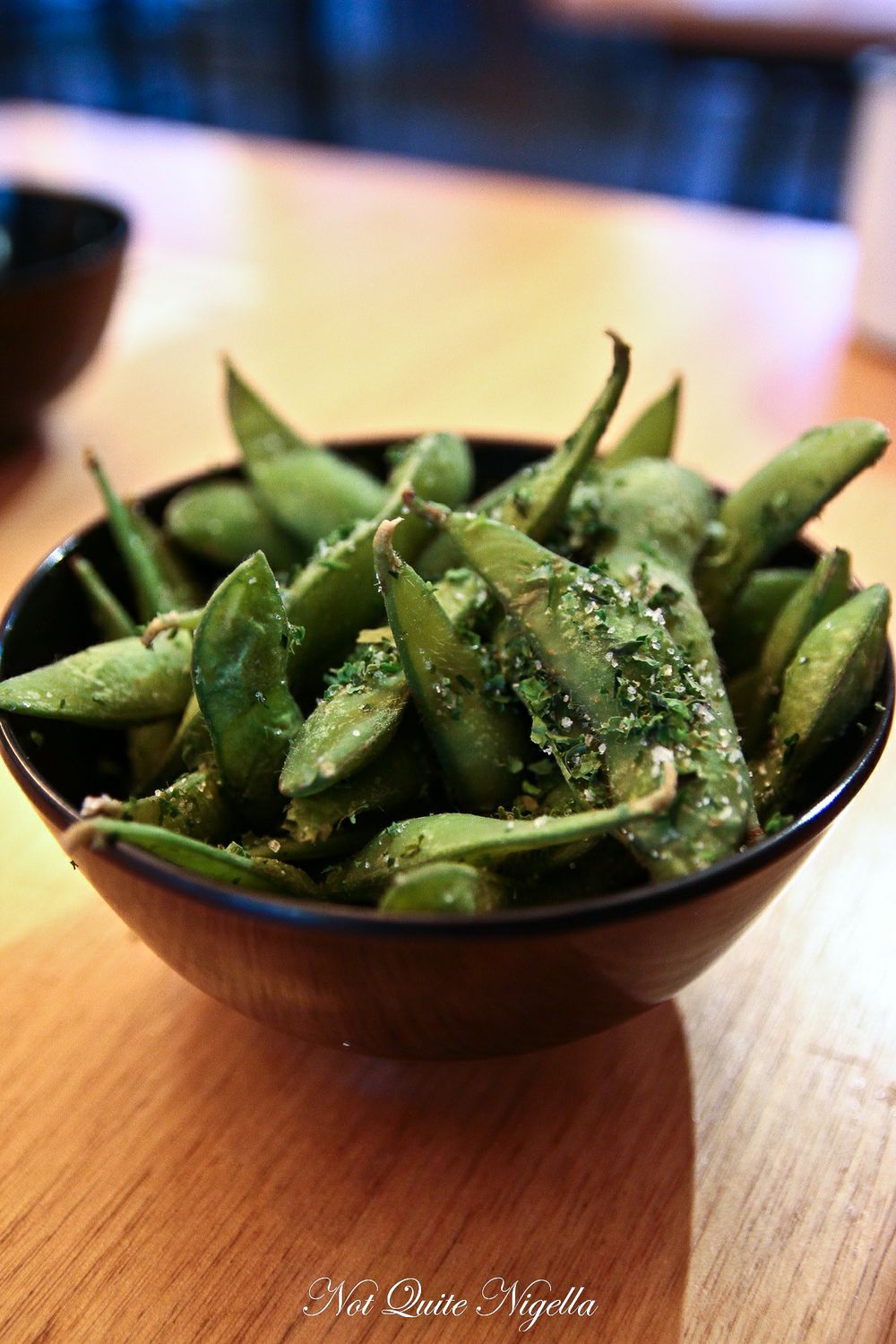 This was an order for vegetarian Manu. The edamame beans have been sprinkled with a tasty seaweed salt which makes them quite addictive. 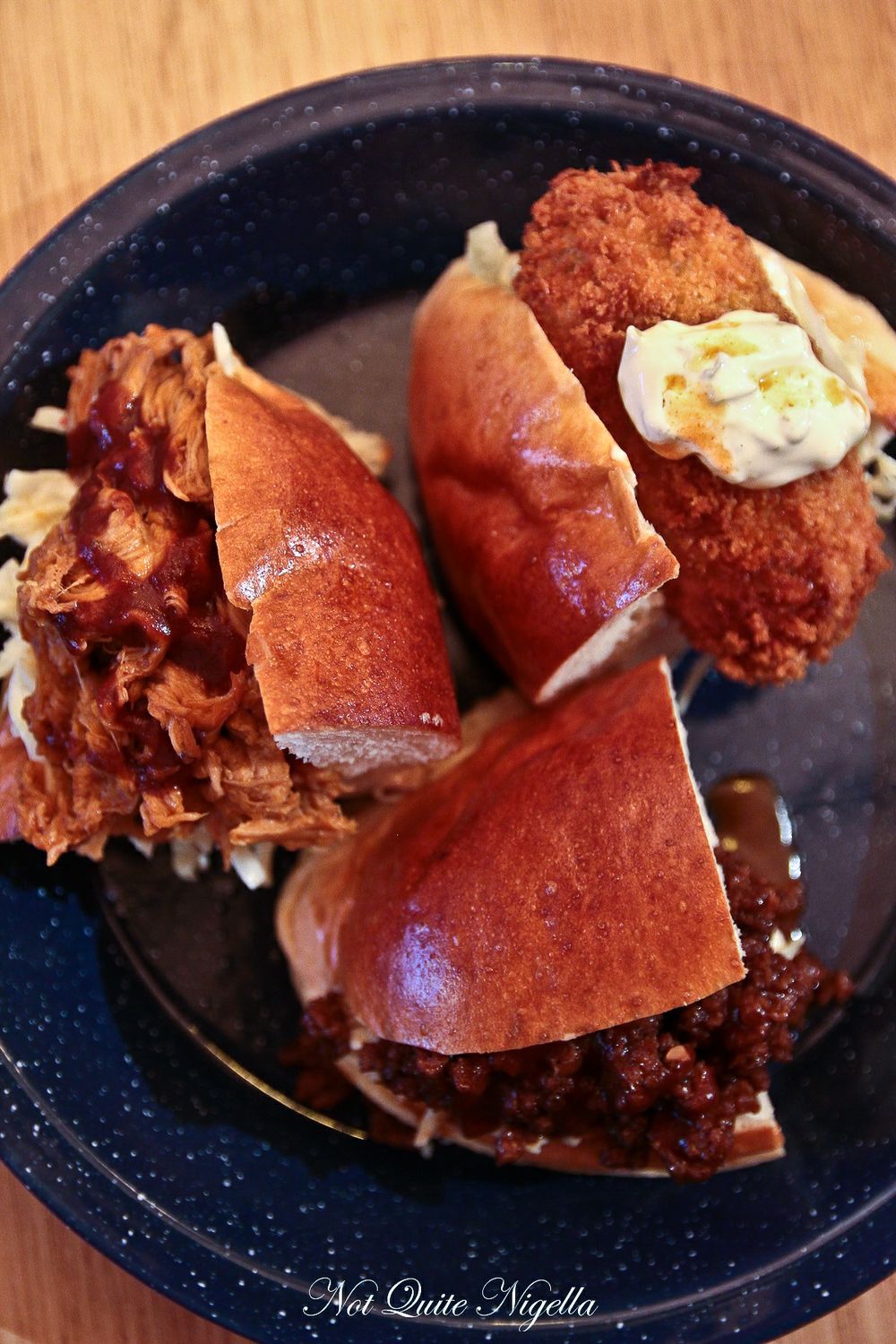 There were five fillings for the buns and we chose the prawn po'boy, pulled pork and sloppy joe which meant passing up on the bbq beef brisket and fried chicken (we figured we had that last one covered already). They arrive and are very large indeed and a plate of three could bust any hunger. All of the soft, slightly sweet buns have a layer of coleslaw on the bottom and then the toppings above it. The prawn po'boy is more Japanese cream croquette which pleases me to no end. The filling with small whole prawns and a creamy sauce takes me back to Japan. The sloppy joe is all of that and the rich, dark mince spills out onto the plate when trying to move it from plate to mouth. The pulled pork is soft and generously portioned with a sweet barbecue sauce on top. 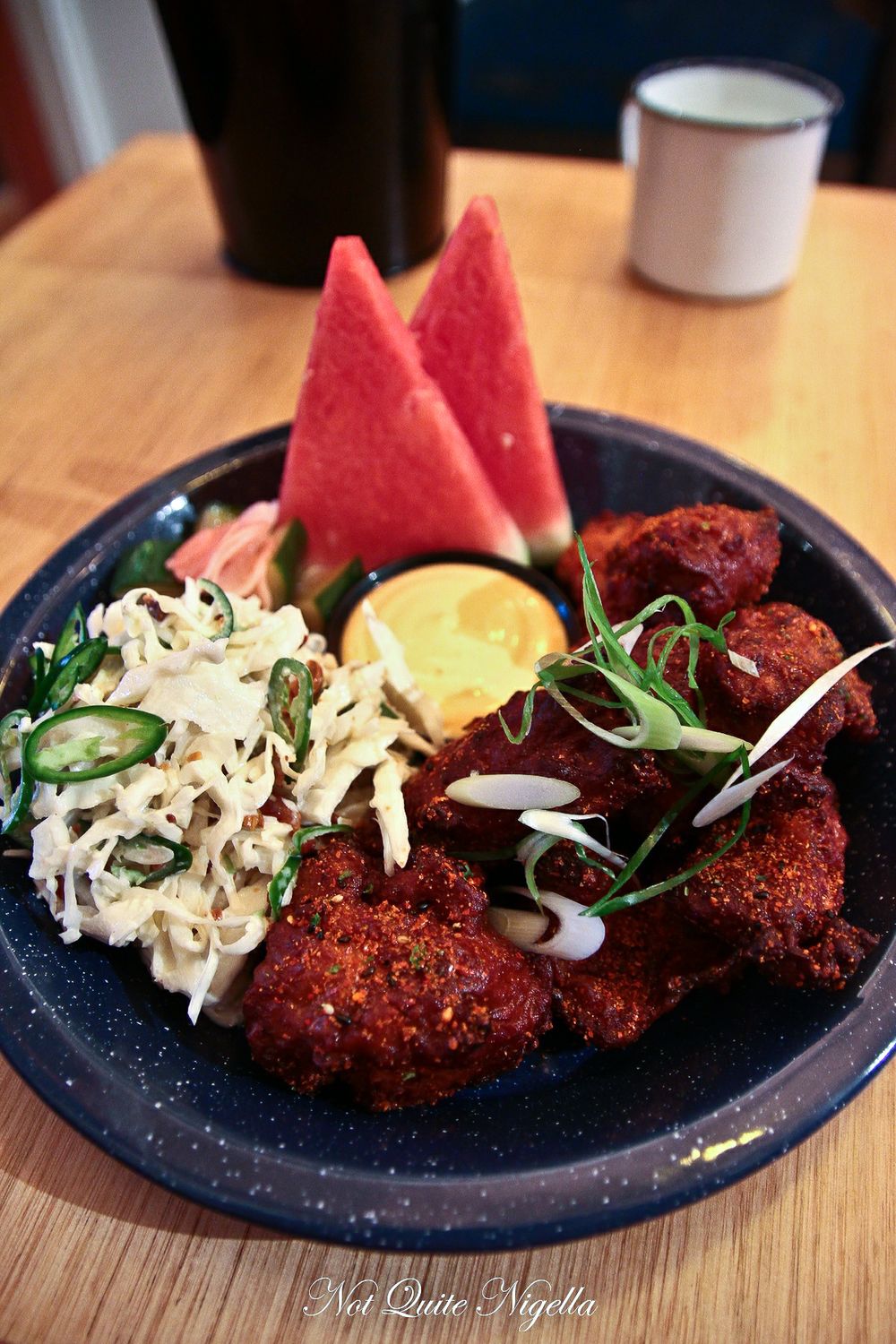 The mains are called "Create Your Plate" where you select from three meat courses as well as one special and a side out of a choice of five. The fried chicken is actually chicken karaage rather than a western version of fried chicken. It comes out as a very generous sized serve, especially if you've indulged in one of the hunger killing buns above. The moist, boneless chicken pieces are dark brown, with a little shichimi t?garashi chilli pepper seasoning. The watermelon is a refreshing mouthful to cut through the chicken and the green chilli slaw with its slight bitterness and crunchy pieces of peanut is also tasty. Try as we might, we couldn't finish it and ask for it to be packed to take away. 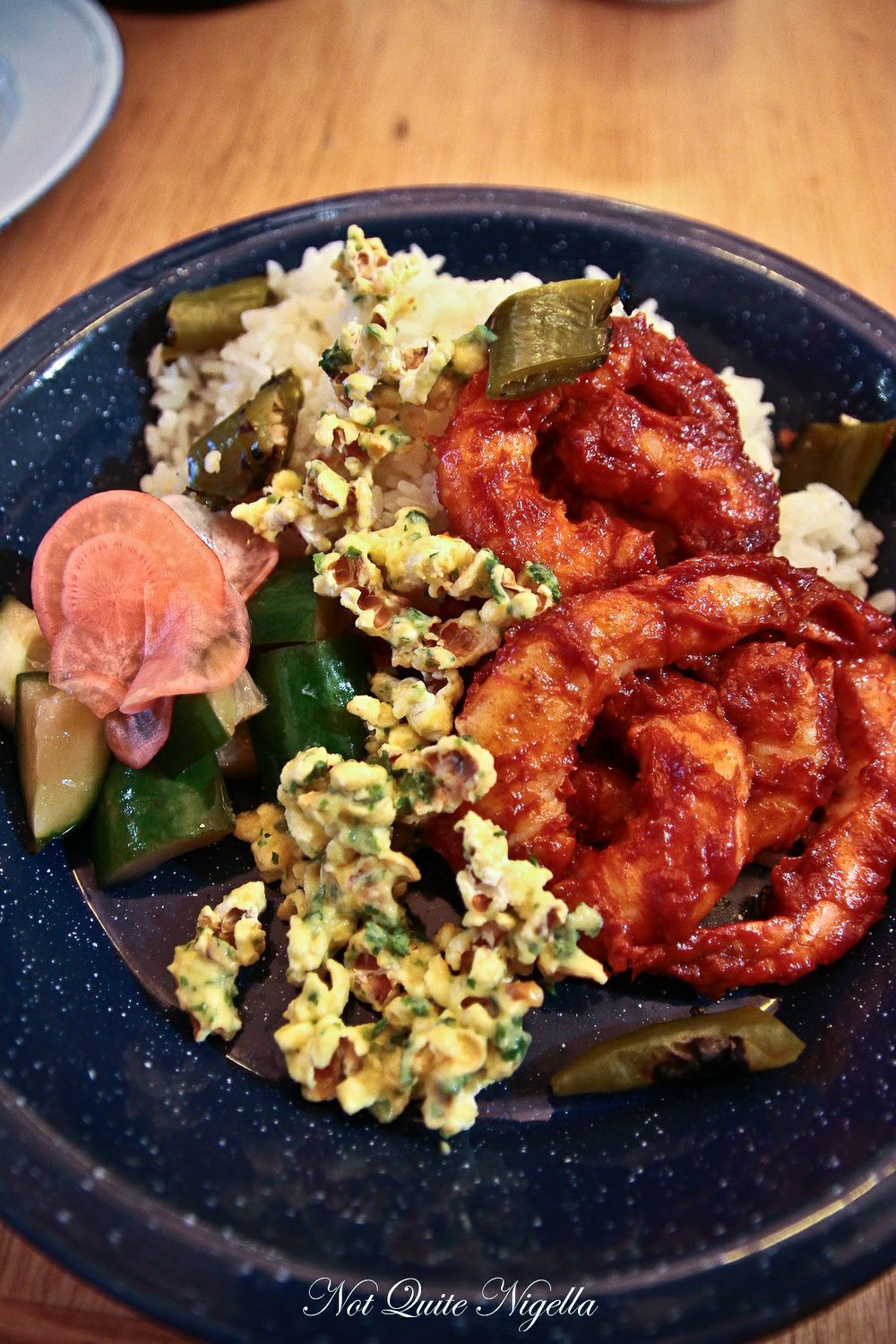 Grilled prawns with peppers and popcorn with buttered rice $18

If you've ever been to Oahu's North Shore and visited the famous shrimp trucks, this meal will bring memories back. Cooked in a spicy tomato based sauce which reminds us of Mexican flavours, it also comes with pickled peppers and popcorn that tastes like creamed corn which I was rather intrigued with. I selected the buttered rice to go with it just for that Honolulu Shrimp Truck experience...well in Bondi. 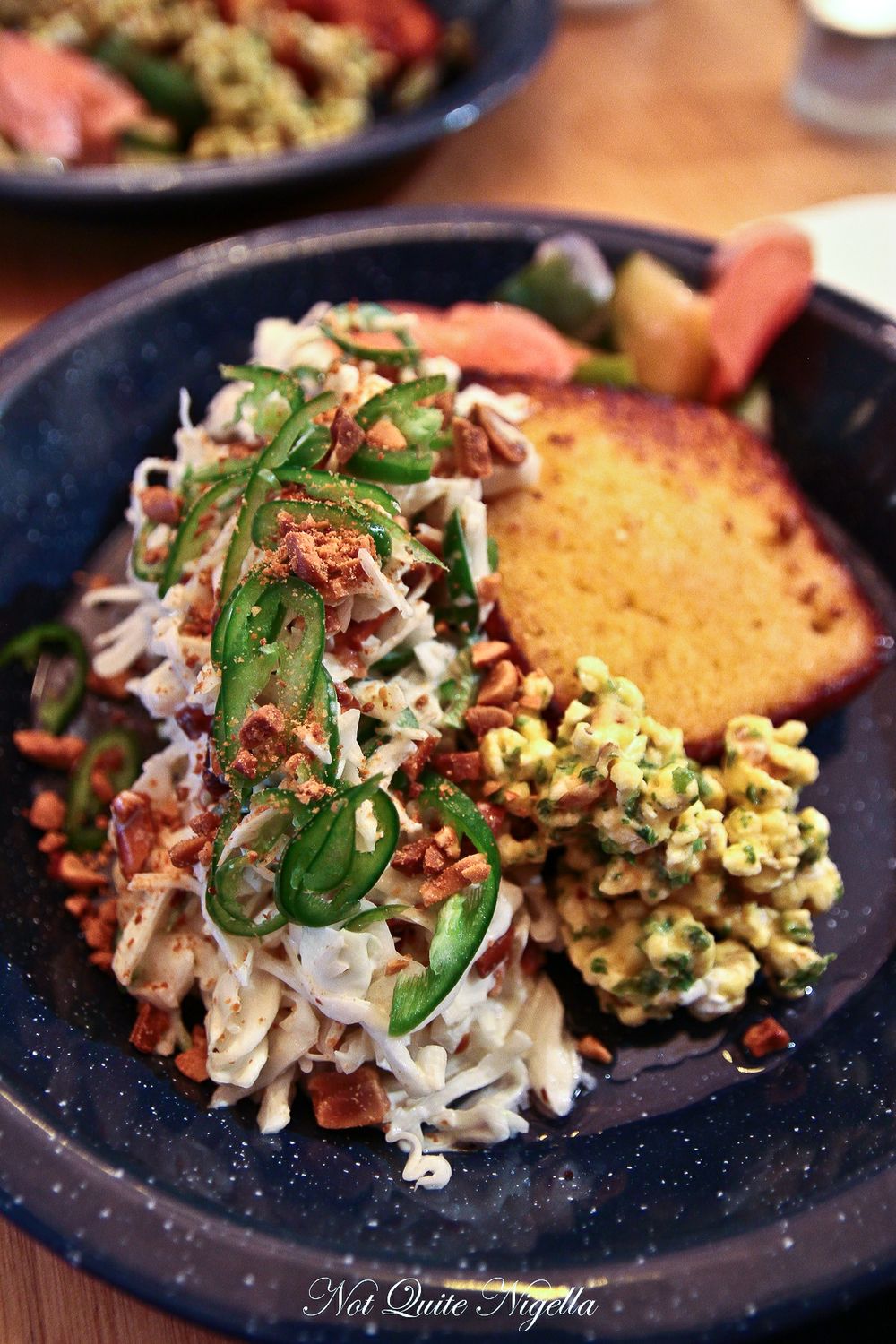 The vegetarian option is really just all of the side dishes plated up. Although we can see that they're trying to keep options small, some great Japanese tofu or something else in place of the protein would have been a better idea especially in a place like Bondi where there are plenty of health conscious people and or vegetarians. Manu was diplomatic (and I didn't want to try any of his as he looked hungry from moving) and said that it was "an interesting mix." 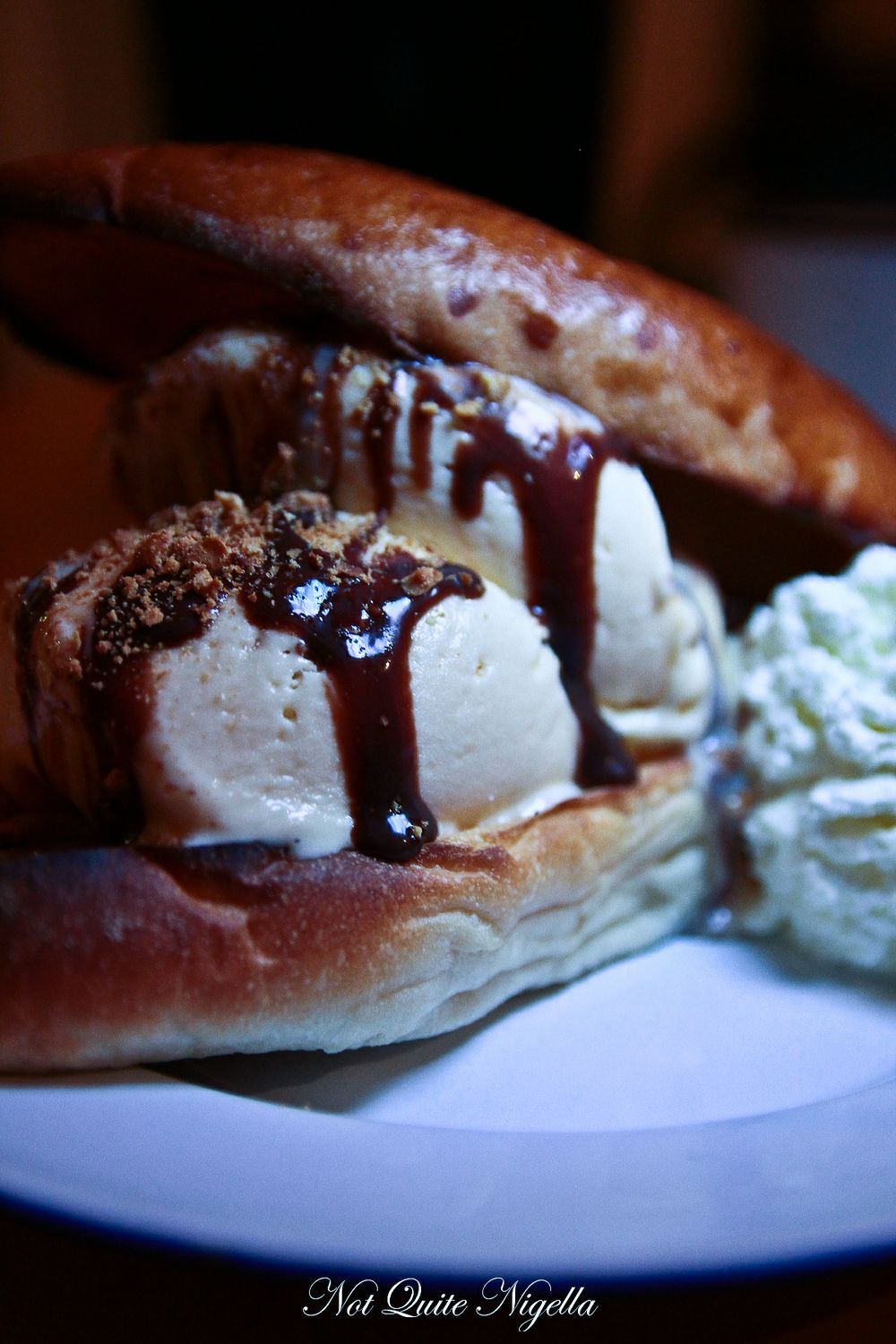 Around 8pm the DJ starts and every night some sort of music is provided to patrons.  The dessert is called Sailor Jerry with peanuts and chocolate sauce. We ask and are told that Sailor Jerry is just a name that was given to it rather than having another deeper meaning. It's a roll, the top half hollowed out and the bottom baked brown and filled with a peanut butter ice cream with chocolate sauce. Having a knife is necessary for this if you want to eat the bread part too.

So tell me Dear Reader, what is your Pavlov food? The one that gets your drooling at the mere sound of its name? 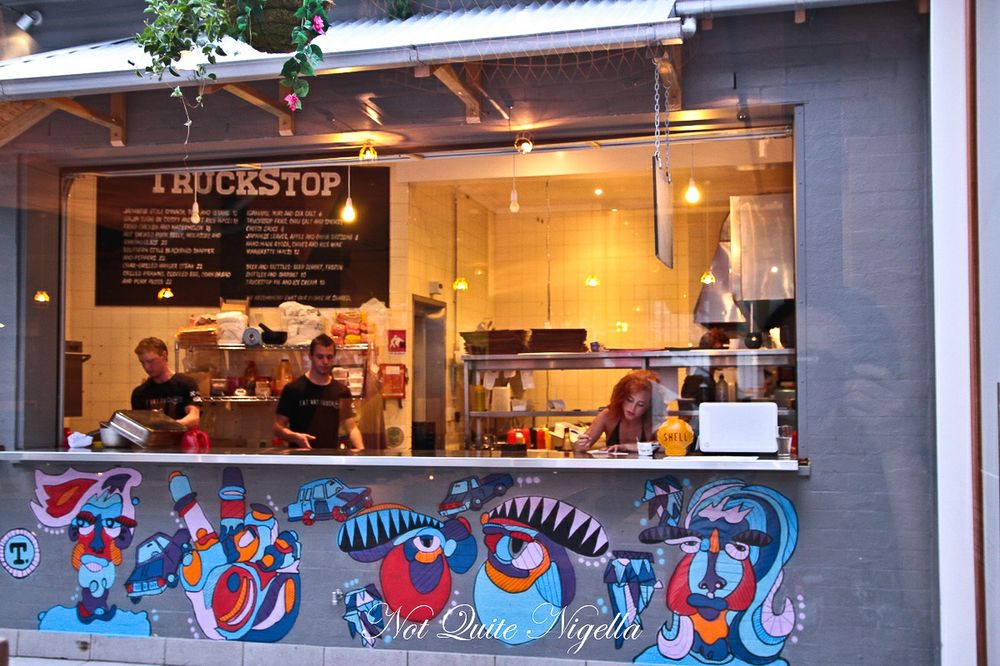 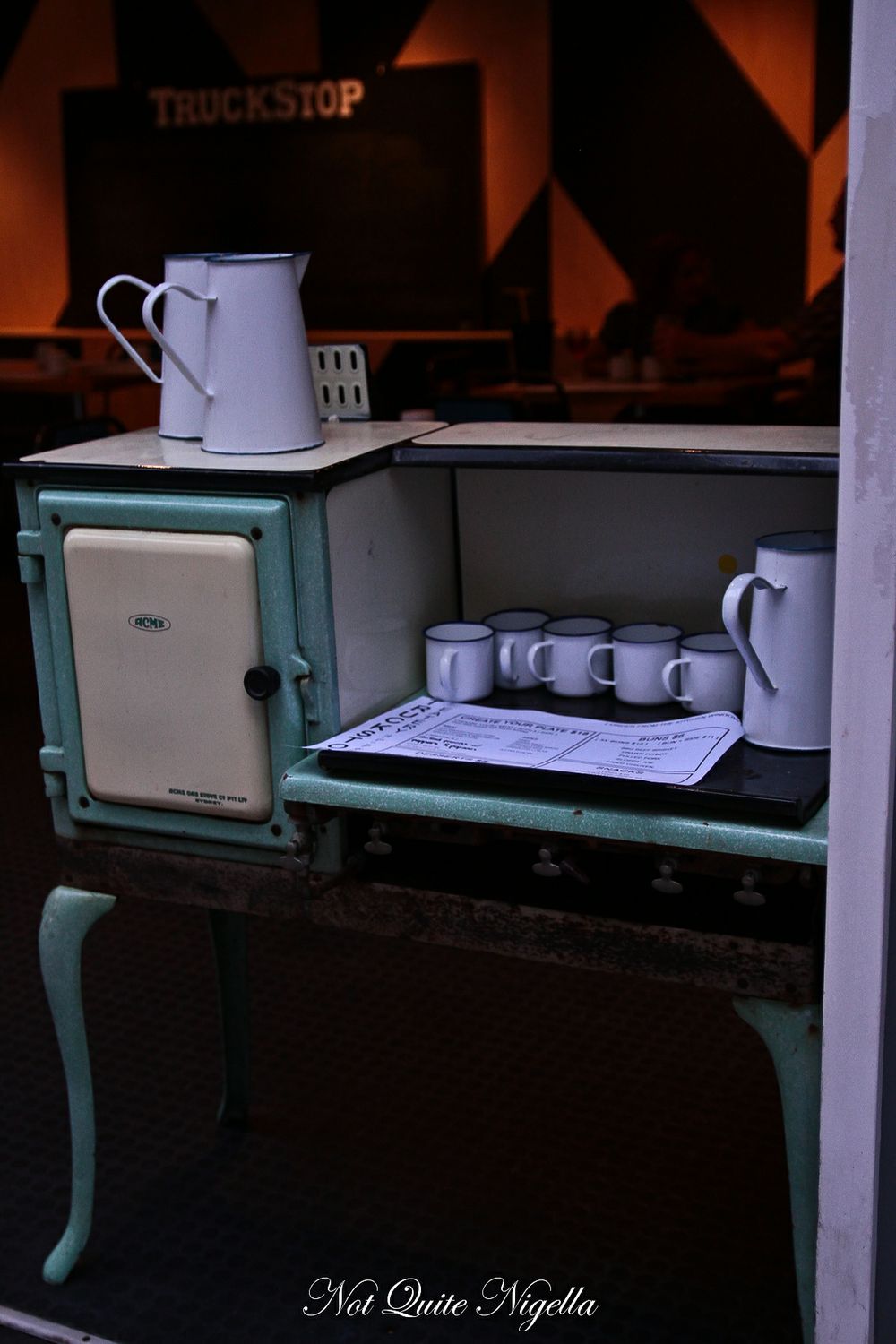