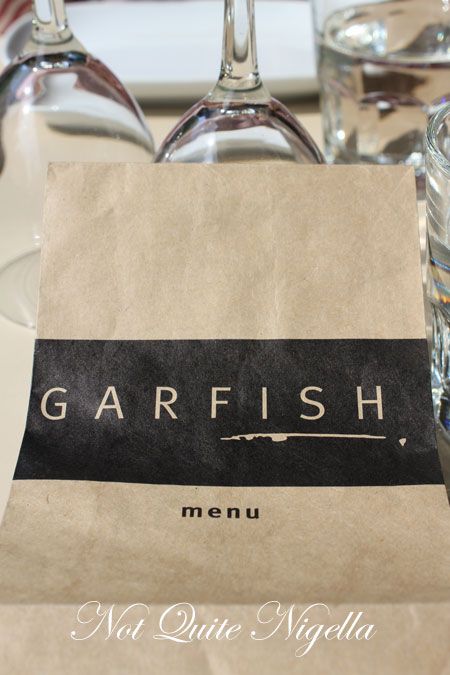 It was that moment of panic. You know the one - where you need to find a place to eat in the immediate vicinity and there are no seemingly viable options. The place that I was taking my mother for her birthday lunch was closed, unexpectedly so and we were driving around Kirribilli trying to figure out where to go. My mum was flexible, anywhere was fine. It was just me that wanted to make it somewhere nice.

"Why don't we just go to Yum Cha?" Mr NQN says. The only problem was that the Yum Cha I knew was in North Sydney and I had already written about it so I wasn't in the mood to reblog it.

"Fine but I can't blog it" I whispered to him. 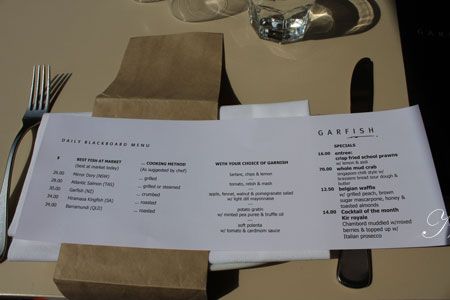 Mr NQN thought about it and realised that a meal eaten and paid for and not blogged is a missed opportunity so we kept driving. Until we reached Broughton Street. I suggested Garfish guardedly. You see Mr NQN, Queen Viv and Miss America had dined at the Crows Nest branch years ago (B.B.=Before Blog) and had a highly unimpressive meal there. The waiter was rude, the servings were tiny and we left hungry and poorer. But figuring that lightening the wallet in aid of a birthday was probably the best excuse and besides, these people were hungry we decided to go back.

We choose an outdoor table. Our male waiter is friendly and explains the menu. There is the paper fold out menu that sits on the napkin and then there's the daily specials menu with fresh fish of the day as well as specials. He recommends the Singapore Chilli Crab which at $70 for two including bread and salad is actually not a bad price at all. We choose the crumbed garfish with a coleslaw with apple, pomegranate and dill mayonnaise as well as a salt and pepper squid. The prices thankfully haven't seemed to risen from our visit the years before. 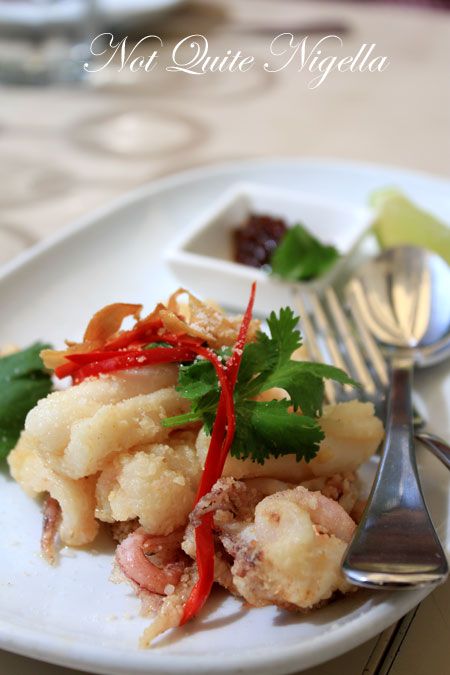 While waiting for out entree, we ask three times for the side flap to be pulled down as the sun is shining directly on us. We're on the brink of doing it ourselves when the tall waitress does so. Our salt and pepper squid arrives and true to the warning, it's small. Ahh yes a reminder of our last visit. It is quite good though and the chilli and ginger sauce is moreish. My mum loves it so she asks the waitress if she can keep the chilli sauce and the waitress says that she'll bring out a fresh one for our mains. She never does and we have to ask for it later when our main arrive. Then the waitress takes my knife and plate but places my used fork back on the left hand side of my setting. She takes my mum's fork and knife but leaves my father's fork and knife. Odd. 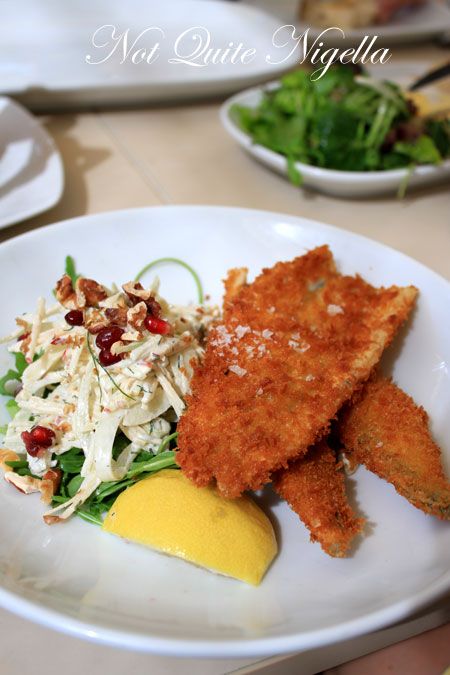 The wait for mains is a little longer than we'd like but it looks to be a small kitchen. The crumbed garfish is quite good although I don't often go for crumbed fish when dining out (my mum's choice, she loves crunchy deep fried things). The accompanying salad is very good and we try it with the chilli sauce. 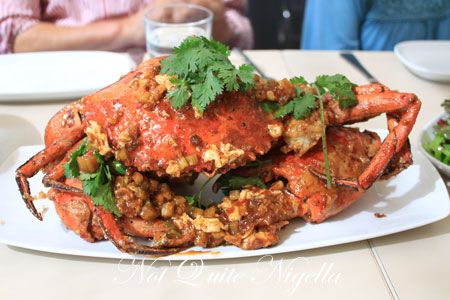 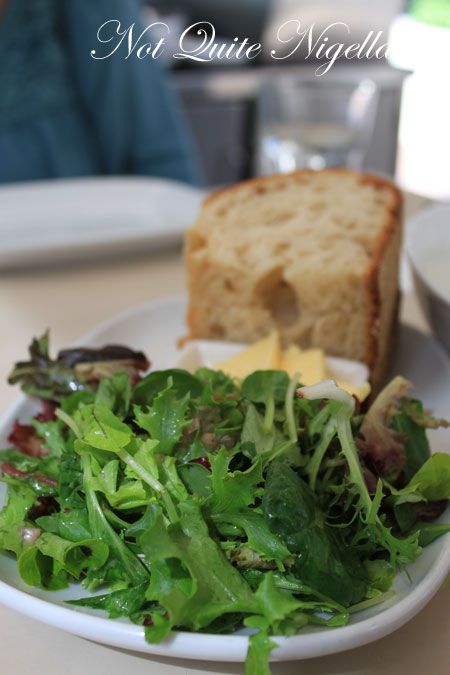 _Singapore Chilli Mud Crab $70 for two including salad and bread

The waiter brings our mud crab out and it's certainly spectacular looking. It comes with 3 slices of bread and a green salad. It's huge - much bigger than we're expecting. We don't seem to have much luck with crab at Chinese restaurants, they're mostly empty and disappointing which is why we order lobster nowadays but this one has gigantic pincers and is very large with an abundance of meat (I wonder if they have better luck selecting crabs here?). Even my father who grew up in Hong Kong and doesn't partake of eating food with his hands happily hoes in with both hands. We ask him if he likes the crab  and he nods "It's the best crab I've had" and we're constantly murmuring about the amazing amount of meat in it although we understand that the fullness of crabs is often pot luck, at least as far as our experiences are concerned. I ask my mother, born and bred in Singapore whether it's a true Singapore Chilli Crab and she says "No but it's very good". There's no egg swirled throughout it and the sauce is sweet and sour sauce with chilli and pepper throughout it which I understand is a modernish variant of it although not the one my mum grew up eating. 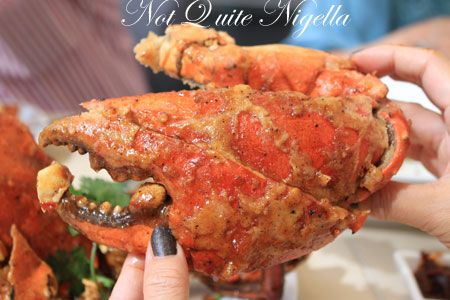 The bill comes and it's reasonable and unlike the previous visit, we're more than happy to pay. Strangely they have charged us for the extra sauce - not that strange in itself but considering the waitress took away the mostly full sauce only to promise to bring a fresh one back only to not it's a bit odd to be charged for it. Hold onto your sauces if you need to :P

So tell me Dear Reader, do you feel squeamish eating with your hands?