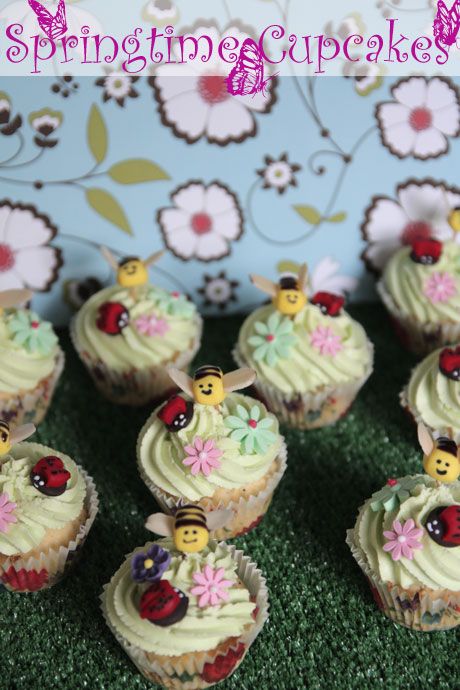 This past week has been one of the most frantic of my life. I can't quite reveal why just yet (although I'm dying to!), but I do have some rather exciting news to share with you soon. But with excitement comes much work and these past few days have passed by in a blur of sleepless nights-one evening involving a torturous one hour of sleep where I watched the projection clock goad me with it's pulsing red digits and tell me that I was about to have the least sleep ever. I was tired and out of sync yet still I was deliriously happy. 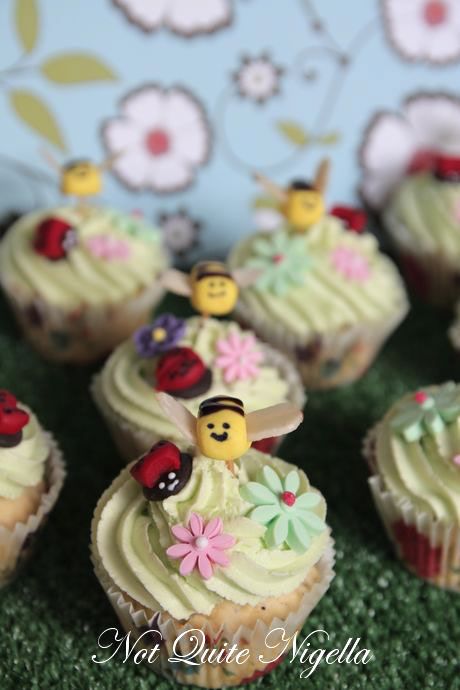 In the midst of all of this activity I had promised to make Christie some cupcakes for her impending baby shower. She was having a Spring themed baby shower so I thought that making bees and ladybirds would be a good idea. I had some floral patterned cupcake liners and some sugar blossoms that I bought from the Adelaide Central Markets. I decided to make her some mango and poppyseed cupcakes as I've started to see some delicious mangoes in the stores. 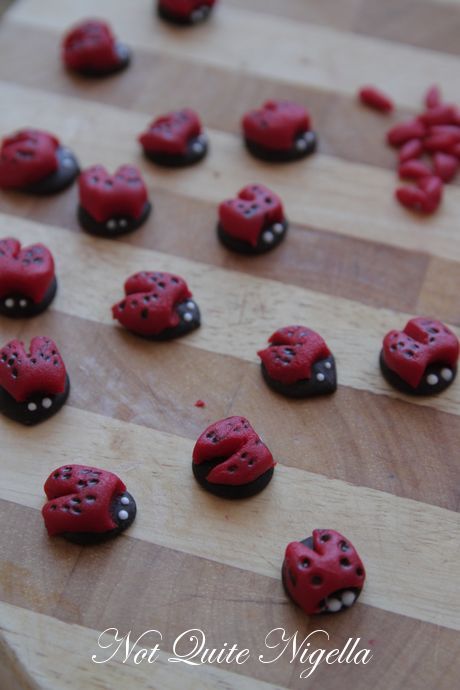 I fashioned the bees much like Nigella's chocolate bee cake by sticking some flaked almonds in some coloured fondant in place of wings. The ladybirds were sort of ad hoc and I made a vanilla buttercream icing (although a cream cheese icing would do quite nicely too). I rushed about and realised that I had no time to photograph them as I only had a tiny sliver of time between 7:30am and 7:45am one morning in between waking up, packing and catching a plane. Still, despite being a human kerfuffle, could not have been more happily frantic. 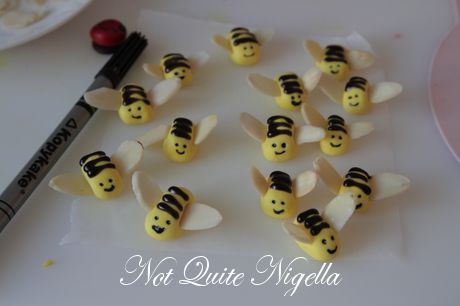 In this vein, shamelessly borrowed from the lovely Celia's fabulously uplifting post from yesterday, this is my list of teeny tiny moments of happiness.

Teeny Tiny Happiness 1: I can pick a seemingly endless supply of jasmine from my neighbours from the bush that creeps out beyond their fence.

Teeny Tiny Happiness 2: I got to spend two days with one of my closest friends Queen Viv and we had a ball exploring the Snowy Mountains. And I packed just right and didn't break a nail.

Teeny Tiny Happiness 3: I have had three good hair days in a row. I must never cut my hair again. OK that doesn't quite work does it?

Teeny Tiny Happiness 4: I am the United States of Tara without the new for medication and/or therapy and I have perfected a new alter ego. I love to imitate accents and I can now do an excellent New Zealand accent thanks to native NZer Queen Viv who has been coaching me. 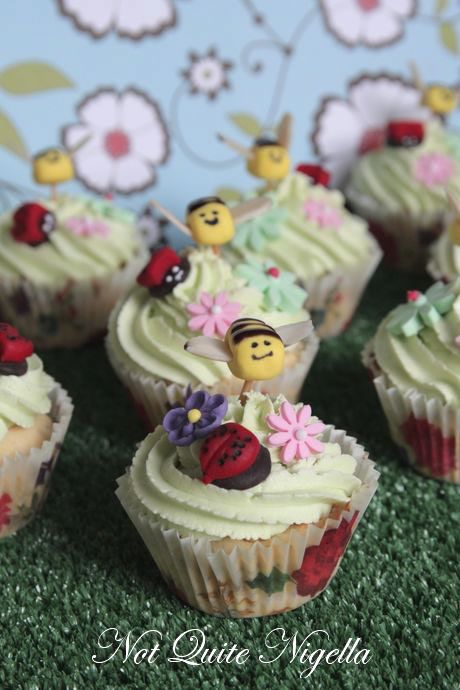 Teeny Tiny Happiness 5: I dropped my iPhone 4 onto the tiles and it didn't require resuscitation or get scratched (yes we're joined at the hip now).

Teeny Tiny Happiness 6: Mr NQN didn't see me drop it so he couldn't a) get mad or b) have ammunition to call me clumsy.

Teeny Tiny Happiness 8: I got some lovely emails from readers. These delight me beyond belief!

Teeny Tiny Happiness 9: My taxi driver today knew where he was going.

Teeny Tiny Happiness 10: OK I just have to share a bit of the news....I'm going to be in a television commercial! I'm so excited! I wish I could tell you what it is for but I'm sworn to secrecy...for now... ;) All I can say is that it is going to play over Summer in Australia and New Zealand! I'm so excited about it.

So tell me Dear Reader, what was your latest Teeny Tiny Moment of Happiness? :) 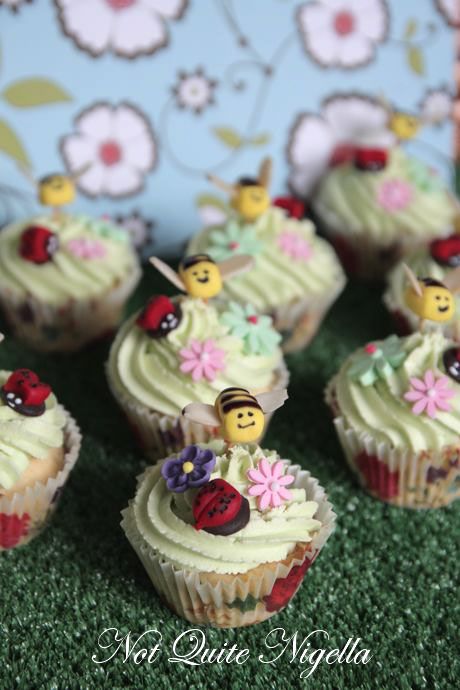 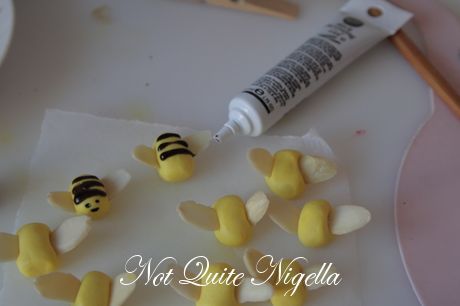 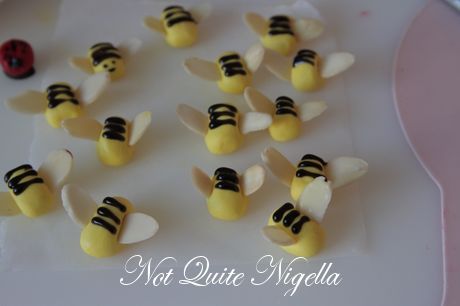 Step 1 - Make the decorations first as you want them to dry. Always start shapes as a round ball. To make bees, roll yellow fondant into a round ball and then shape into an oval. Stick almond flakes into the sides as wings and draw stripes on them using the black gel tube pen (I got these from Little Betsy Baker) and draw eyes and a mouth using an edible pen like the Kopycake one also from Little Betsy Baker. Leave to dry. 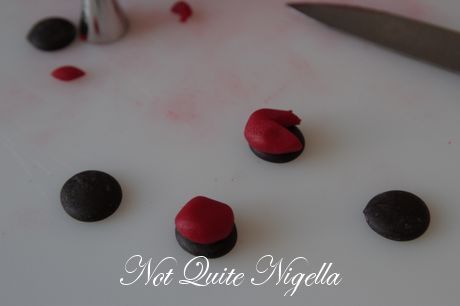 Pressing the red fondant onto the chocolate buttons 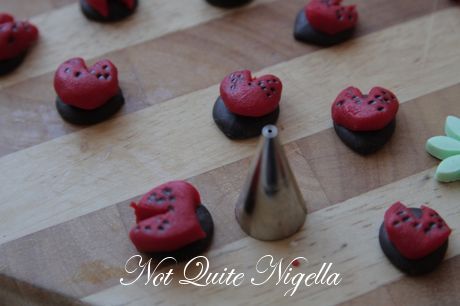 Cutting out small semi circle with an icing tip

Step 2 - Make the ladybirds but pressing out a small ball of red fondant and sticking it to a chocolate button (use water if necessary). With a small paring knife then cut out a small V on one side and the using a round cutter or the open side of a icing tip, cut off the opposite side (as shown). Draw dots on top with the black edible pen and use the white gel tube pen to draw eyes. Leave to dry. 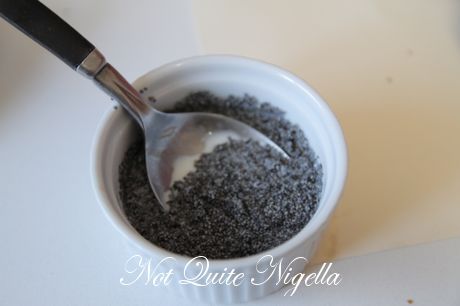 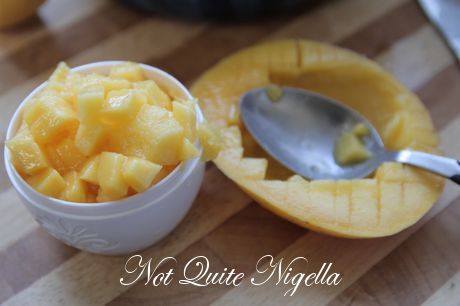 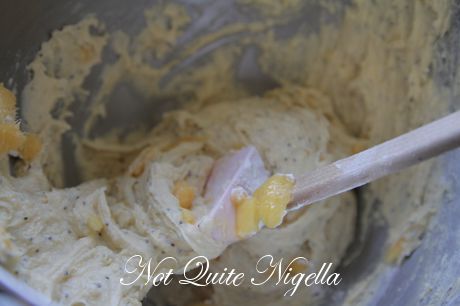 Step 3 - Preheat oven to 180C and line a 12 hole cupcake tray with liners. Soak poppyseeds in milk and set aside.  Beat butter and sugar until light and fluffy and then add eggs one at a time. Fold in flour, poppyseeds and milk and mango flesh. Spoon into prepared pans and bake for 20 minutes until a skewer inserted comes out clean.

Step 4 - To make buttercream, place the butter in a large mixing bowl. Add 2 cups of the sugar and then the milk and vanilla. On the medium speed of an electric mixer, beat until smooth and creamy, about 3-5 minutes. Gradually add the remaining sugar, 1 cup at a time, beating well after each addition (about 2 minutes) and add a few drops of green food coloring until the icing is thick enough to be of good spreading consistency and the colour is completely incorporated.

Step 5 - To assemble: Fill a piping bag fitted with a large star tip with the green icing and pipe it onto the top of the cupcakes. Place 1 or 2 flowers on top and then place a ladybird on the cupcake. Break a toothpick in half and use that to position a flying bee on top of the cupcake.