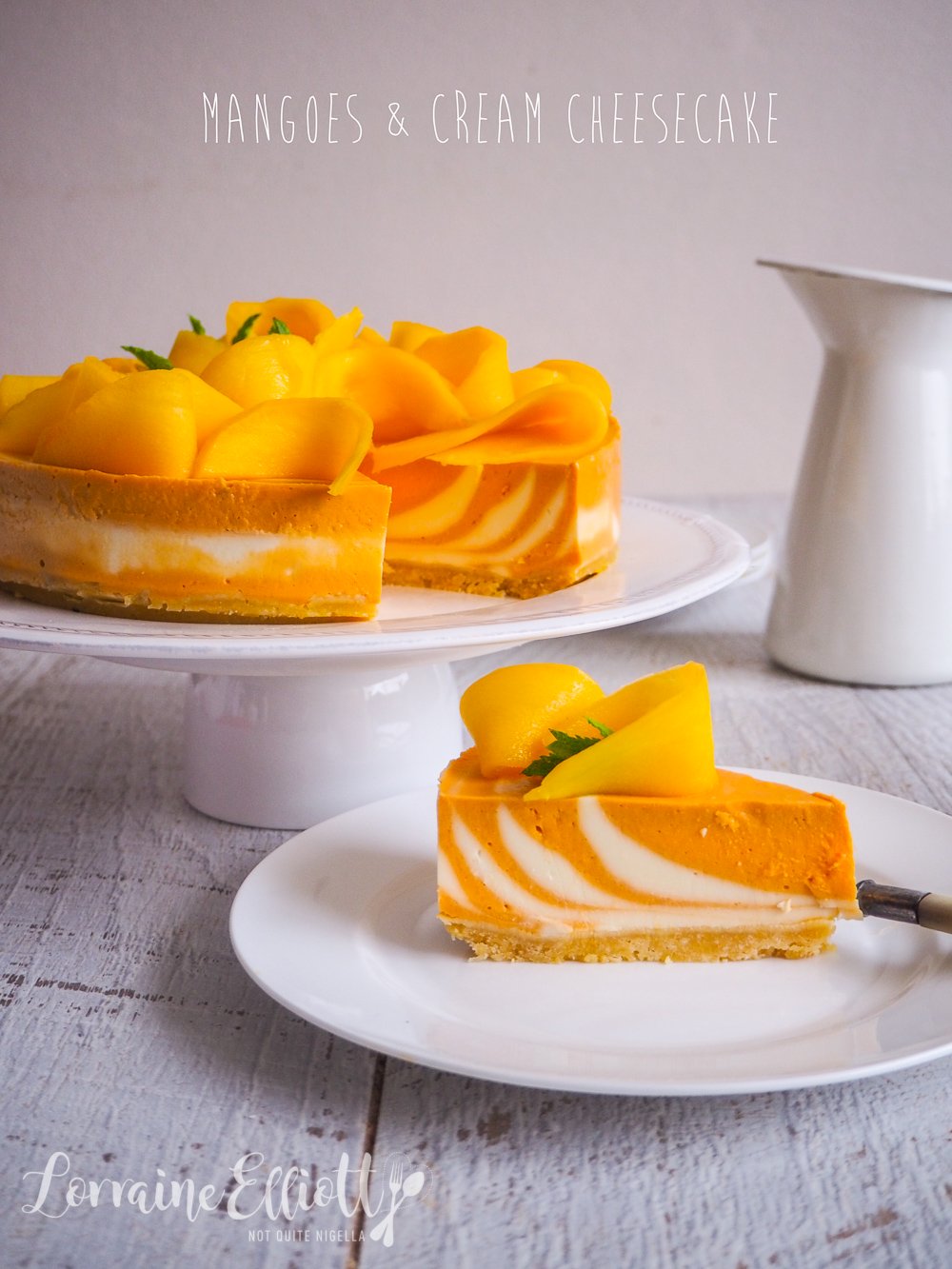 If you're looking for one of those magical low effort to high reward or high impact recipes then this recipe is for you. Mangoes are currently aplenty at the markets and they're so inexpensive, hulking large and tasty. I've even gotten to a stage where I was both thinking, "Oh god not more mango!". Honestly, making this cake will be over before you even know it. And once you cut into it and see the stripe detail, it's more than worth it.

I made this for Mr NQN's nephew's Jett's birthday. 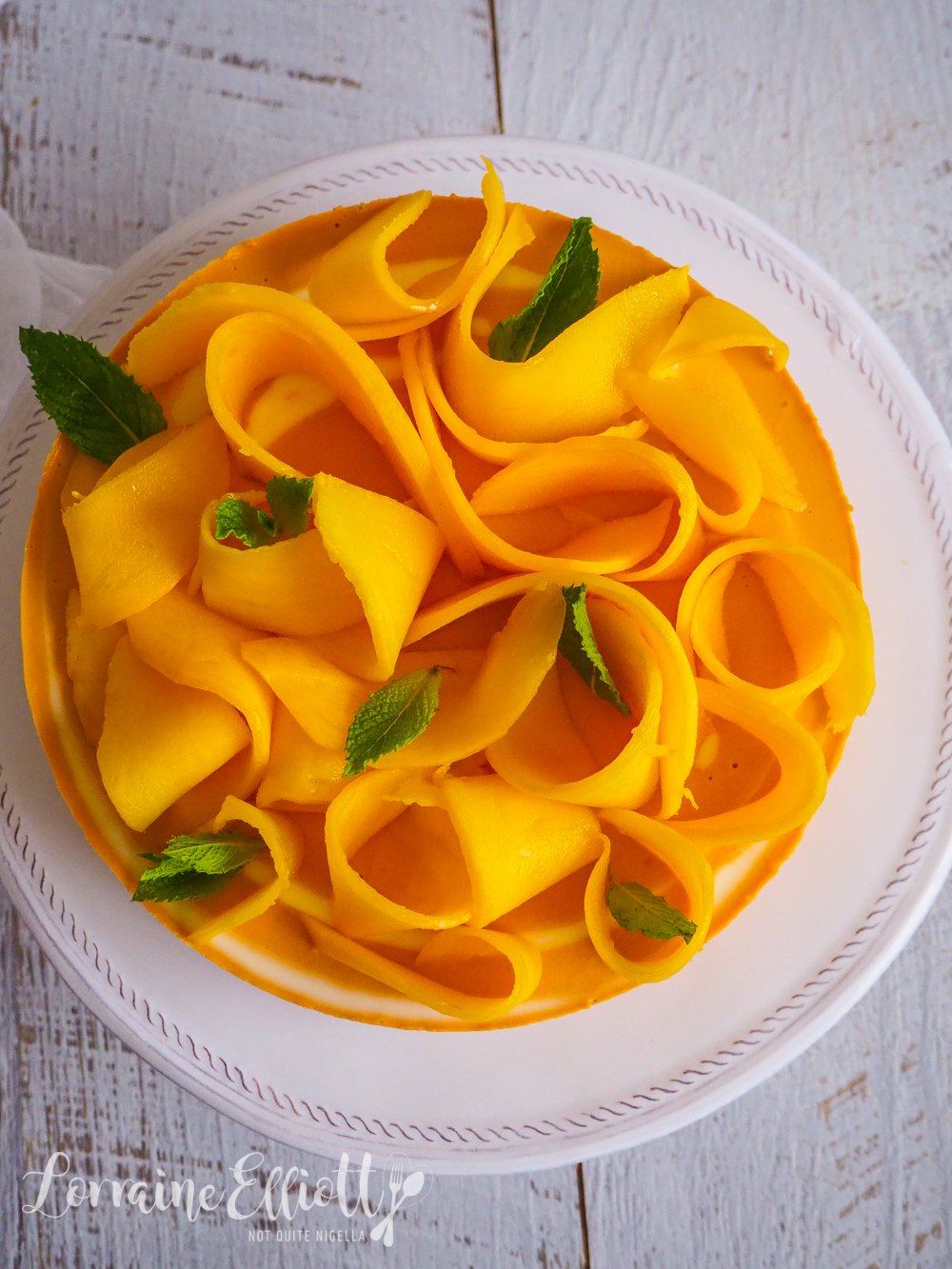 We met at Tuulikki's (Mr NQN's mother's) house. Jett had a fantastic birthday and he was given lots of great gifts. We gave him a solar powered house (got to indoctrinate him in the Elliott ways early) while his aunt gave him a water powered motorcycle toy.

Halfway through the party Mr NQN's father Roger arrived from overseas and took over the stage, flinging open an enormous suitcase and dropping Christmas gifts of tea towels, bags of lupin powder, hand towels and other assorted items. Roger has now ensconced himself in Thailand in his search for true love. He has been dismayed that his calls for love have been met unanswered. He wants someone that will love him for him and not his money.

He told us that he spends hours each day talking to a range of about 90 women on the Line app. I asked him what else he does with his time. "Oh I've been working Lorraine," he answered. Since his father has been at various times, a farmer, naturopath, teacher and actor I wasn't sure what he was doing. 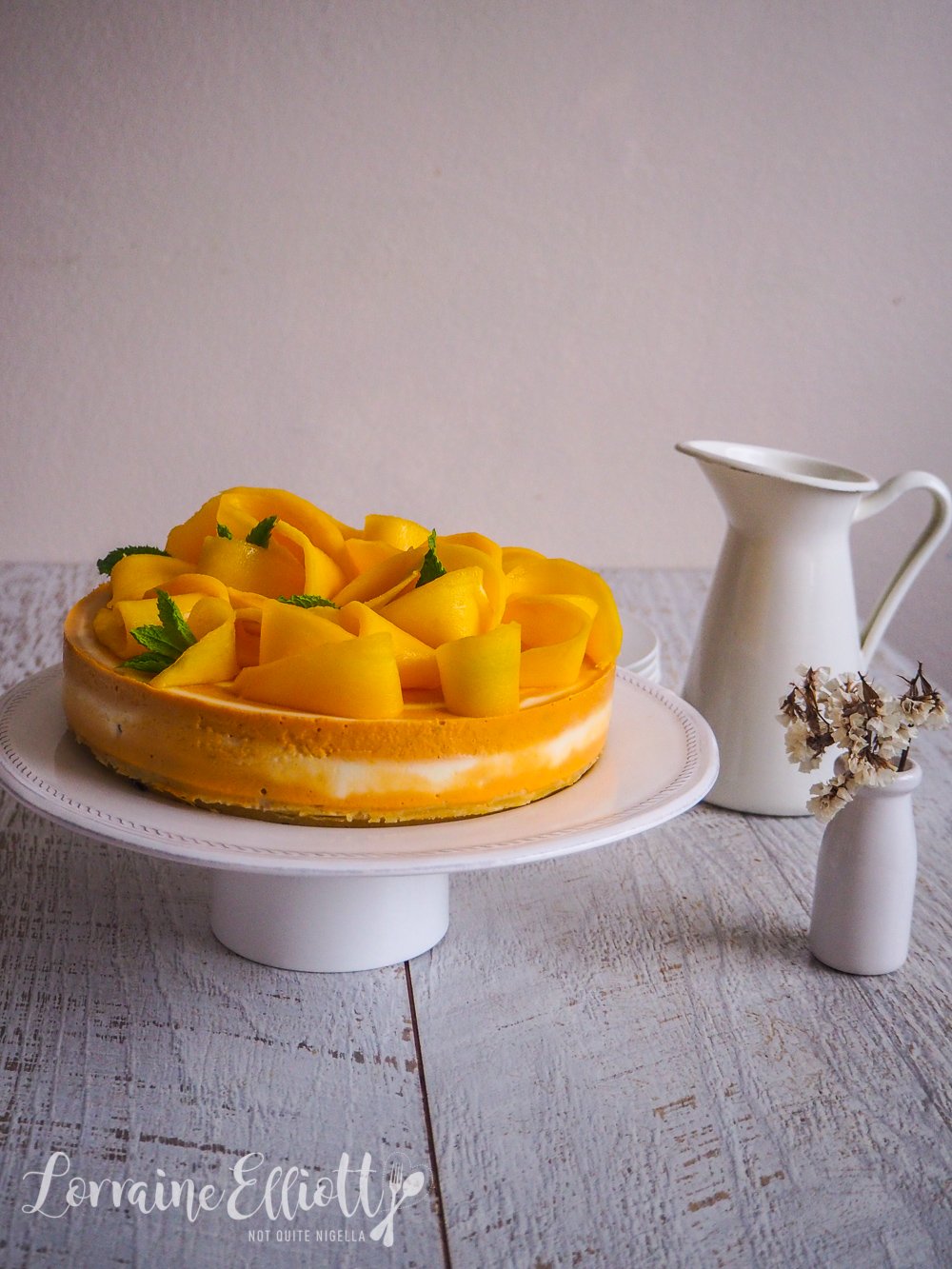 "What kind of work are you doing Roger?" I asked him, curious because last I heard he was taking acting classes and hoping to become an actor.

But then his ex wife, the mild mannered Tuulikki piped up with a perfectly timed burn. "His job is sending those text messages!".

So tell me Dear Reader, do you like mangoes and cream ice cream bars? Have you ever tried this zebra cake technique? And what do you rate Roger's chances for love? 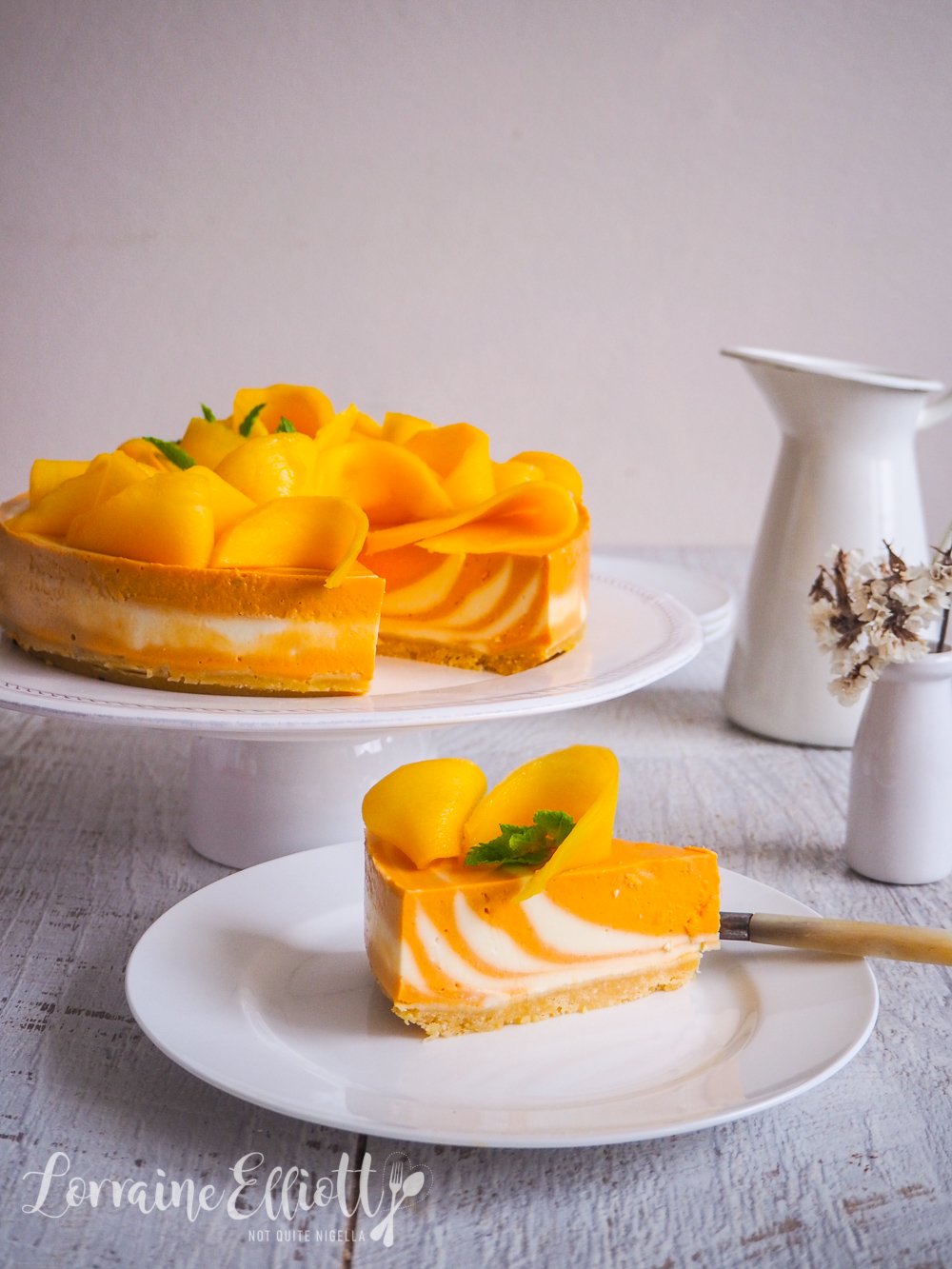 Step 1 - Blend the shortbread biscuits until fine in texture. Add the butter and then into the base of a 20cm/8inch springform tin and place on a plate. Freeze for 10 minutes or while you get the rest of the cheesecake done.

Step 2 - Make the vanilla cheesecake first. Sprinkle gelatine powder over 50ml of cream and then microwave for 15 seconds or until liquid. Cool for 5 minutes and then add to the warm cream mixture and stir well. Blend with the cream cheese, sugar and vanilla until smooth. Place in a jug. 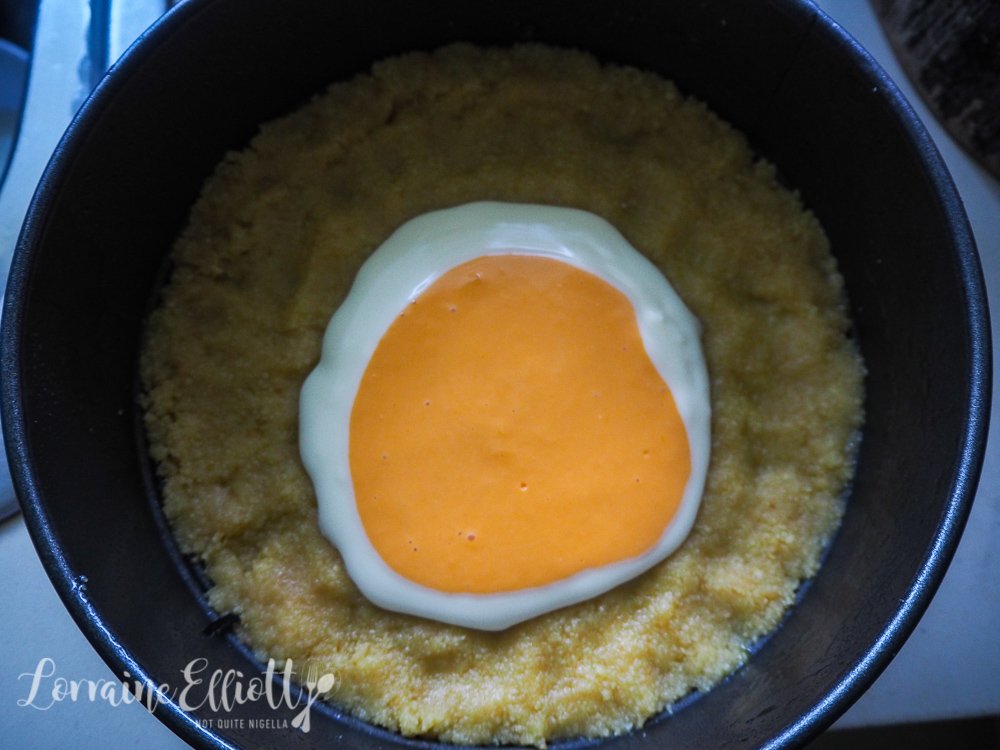 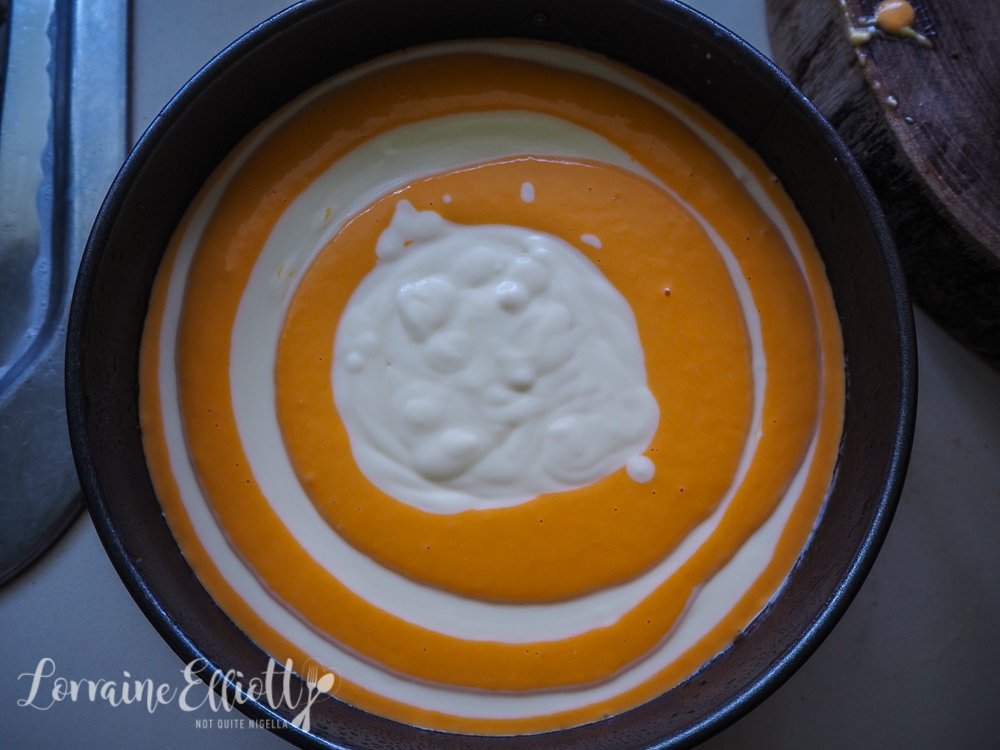 Step 4 - Both mixtures need to be of the same, pourable consistency. My mango mixture was starting to set because of the cold mango so I popped the jug of the mixture in the microwave and heated it gently on 50% power until it was the same texture as the vanilla mixture. 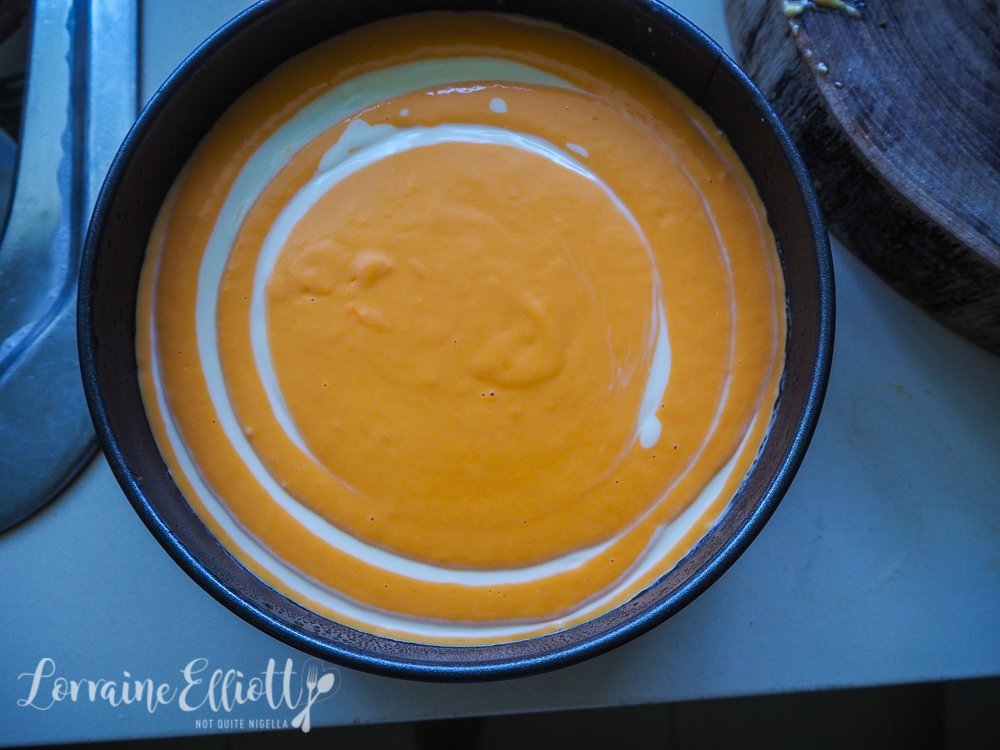 Step 5 - Take the base out of the freezer and pour a circle of vanilla, then a circle of mango and then repeat-the more you switch the more layers you will get. Gently transfer to the fridge and allow to set completely (four hours or overnight).

Step 6 - Take the mango and slice off the cheeks. Peel the skin from the cheeks and then slice very thinly-they will need to be very thin to be able to curl around. Place on top of the cake along with some mint leaves. 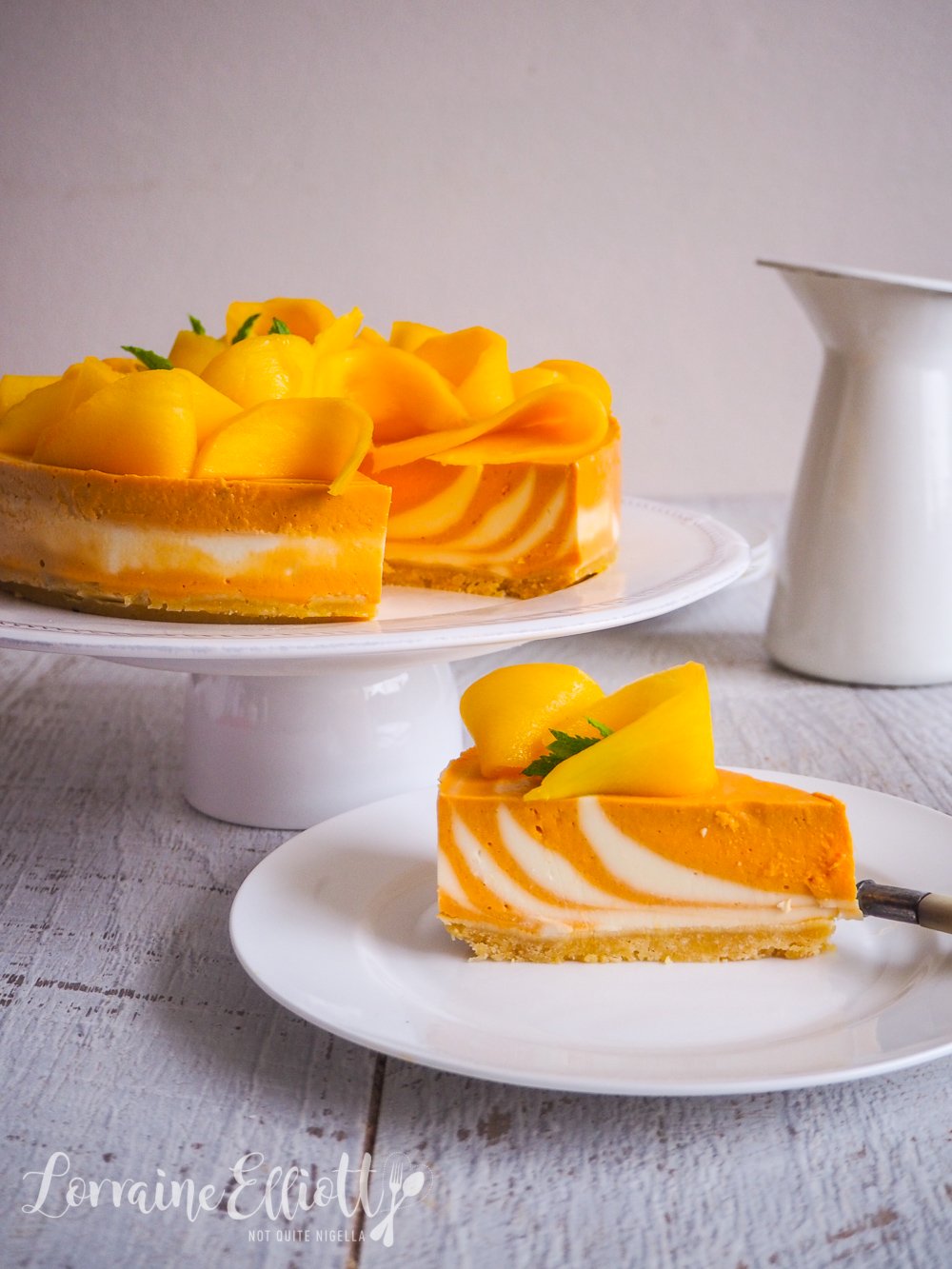