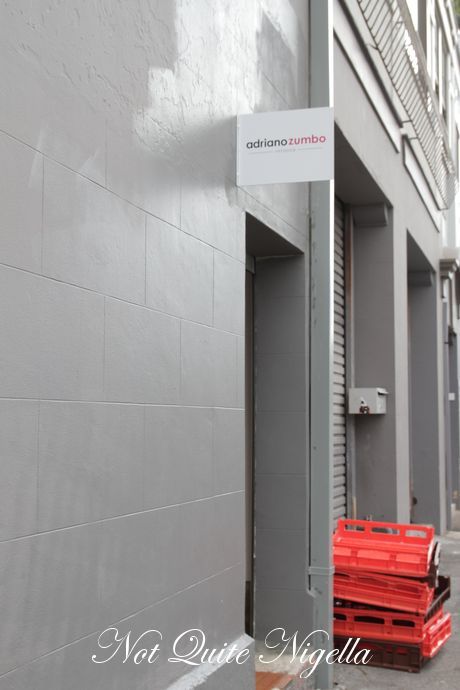 After a good part of a lifetime bumming rides from people and trying to avoid both public transport and exorbitant cab bills I have finally become a driver myself. And the role of a driver entails, kind of like karma for all lifts gleaned, is that I pick up people. Not strangers mind you, but visitors from overseas like Catty who is visiting our sunny shores from London. 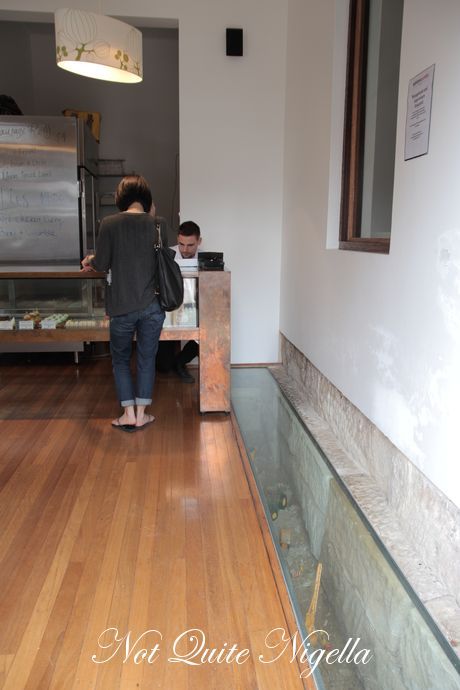 And I figured where better to head on a Sydney summer's day than the new Adriano Zumbo shop in Manly? Unfortunately the weather didn't quite get the memo on our intentions and cast us an overcast day. But no matter, we were heading to a beach to eat Zumbo goodies so it can't have been all bad right? 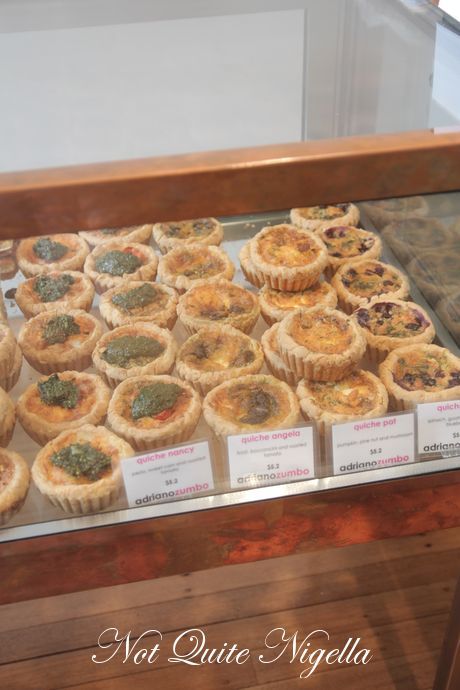 When people have said that the store is small they weren't kidding. You could drive straight past it without even knowing it was there. Just one little sign pokes out from the grey painted building and a dug out portion of the shop reveals boy's toys. Not adult boy's toys but children toy's under glass underfoot. It is small and on the left there is a selection of pastries both savoury and sweet. In the centre are the cakes and to the right are the macarons. 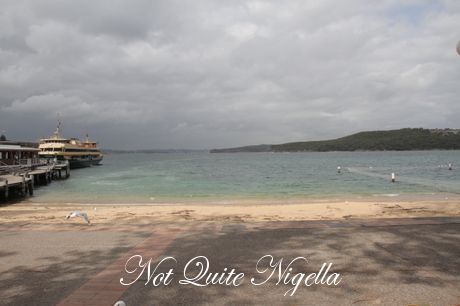 Some of the cakes haven't yet arrived for their daily delivery and I have to admit that I am really looking forward to trying the cakes that were featured on the SBS show Zumbo. There was the the wasabi eclair and the Milo chocolate milk which proved most vexing in terms of construction. But first things first, we need brunch or more specifically we need savouries. Despite the number of times I've been here I've never tried a savoury item. As Catty is Australian she tells me that she misses sausage rolls so we figure there's no better time to reacquaint oneself with the quintessential Australian tuckshop treat? There are three varieties to choose from: pork & fennel; beef bacon and chilli and African spiced lamb. 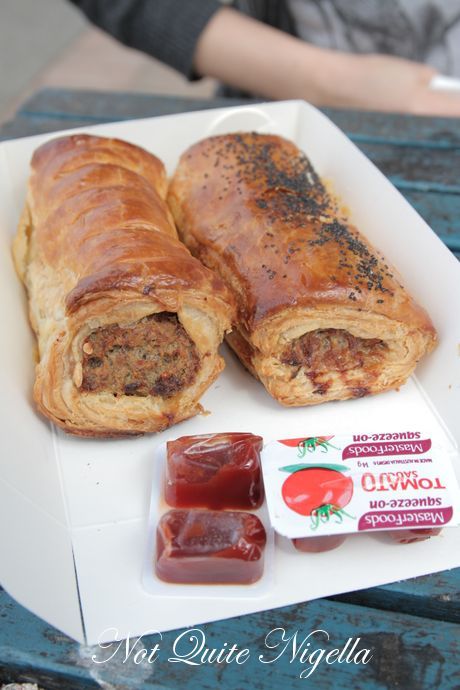 Pork and fennel on left and beef, bacon and chilli sausage roll on right $4

We took the sausage rolls outside onto the esplanade and sat down to eat them. Not a bad view huh? We could tell that the pastry was good when we cut these in half. There were buttery shards of pastry covering both of us and whipping around in the wind. The pork and fennel has two layers-one of pork and a herby layer with fennel. We both found that a little too herbal. The beef, bacon and chilli sausage however is divine-like an old school sausage roll but butter with the right balance and combination of flavours. And you know how some foods never quite taste quite as good as when you ate them as a child? Well it helps if you have a pastry chef making said food. Then it's as good or even better. 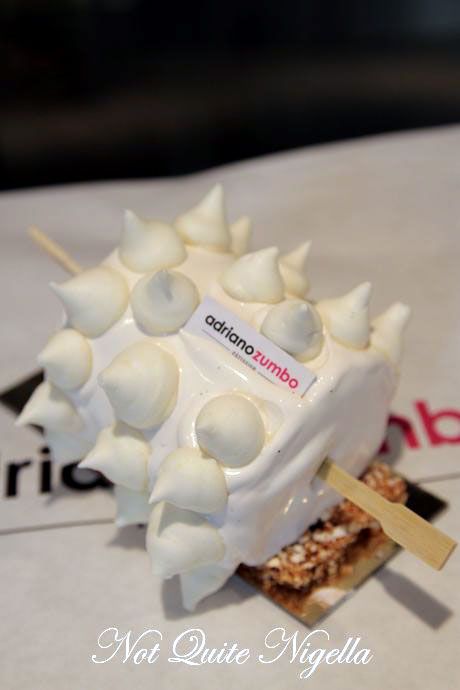 Savouries consumed, we head back to the cafe where they tell us that the second cake delivery will arrive shortly. The Cob and Co is described as a case of corn meringue with a centre of mango lime gel, corn cream and corn mousse and popcorn crunch. We had to eat this in the store as the shop clerk was worried about transporting this home. It has spiky meringue drops on the outside stuck into a marshmallow outer and inside was layers of mango lime gel (which weren't particularly distinct but gave some tanginess to offset the sweet outer), corn cream and corn mousse. And despite all of this the whole cake isn't too sweet, just nicely balanced. A jarring note is the popcorn crunch layer at the bottom which has a burnt taste to it, like caramel that has been taken just a bit too far. It isn't really necessary for taste although we suppose it is necessary for construction. 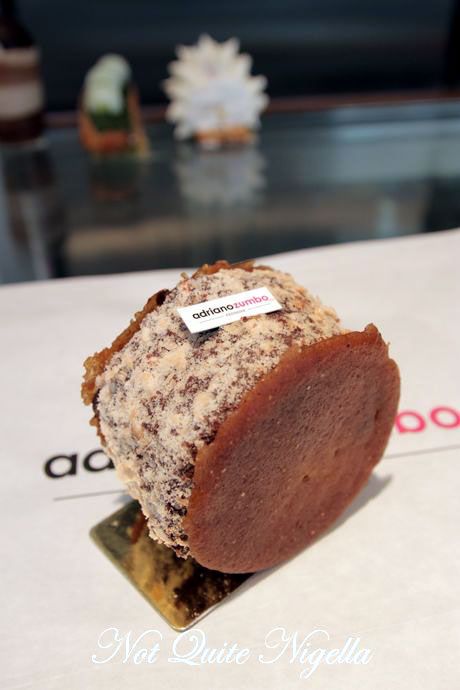 The wheelies are my favourite cakes-I love crunchy and soft textures together and it seems every season he redoes this into  a new flavour. This season it is  hazelnut. The outer discs are delicate, in fact many have suffered a loss of a side on the trip over the bridge but they're buttery and crunchy, like a toffeed brandy snap. The layers of crunchy dacquoise are combined with a caramel mascarpone mousse, caramel maison (a gelatin set caramel based cream), salted caramel plates, caramel cream, dark chocolate rolled in caramel. Phew imagine saying that all in one breath! And yep that's my favourite again...I just can't get past that lovely crunch and oozy cream centre. 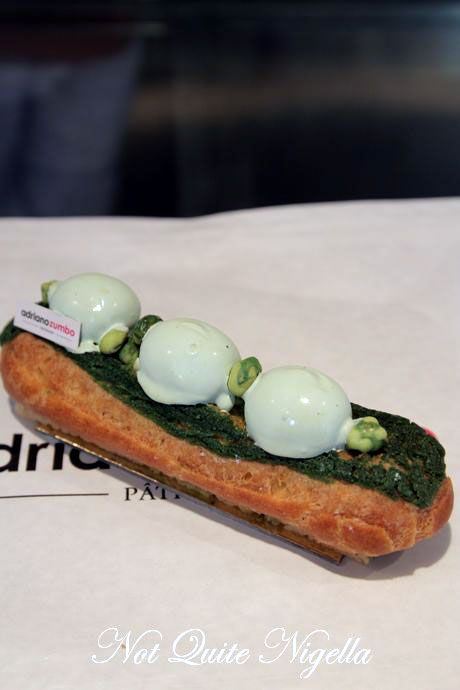 I bought this for Mr NQN as he is a wasabi addict. Me, well I'm not as smitten with the flavour, only when there's the briefest kiss of wasabi so I try this with a little reservation.  It is an eclair which he made on the episode with wasabi balls, pistachio crème Patissier, grapefruit confit and wasabi pea crunch. The wasabi is light and not at all sinus clearing which is a relief and it is creamy and nutty with the pistachio creme patissier. I didn't get any wasabi pea crunch as it had not survived the trip home intact. It's unusual enough but not too crazy. 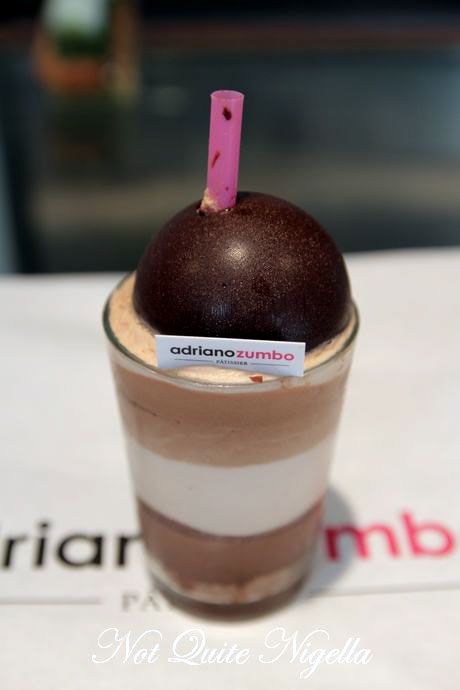 One of the items on the show that proved to be the most difficult to engineer was the Milo dessert which Zumbo wanted to have actual Milo milk in. It is all a matter of airtight layers and if you take a sip through the straw you actually taste Milo milk. It is a cremeux with a malt mousse and Milo milk, Milo chantilly cream, Milo domes and chocolate disks. Milo Milo Milo! This too didn't make it home in one piece although I did steal a sip of the Milo milk before it went kaput and it was...well Milo milk in a cake in glass form. It is also, not surprisingly very chocolatey and for chocolate lovers. 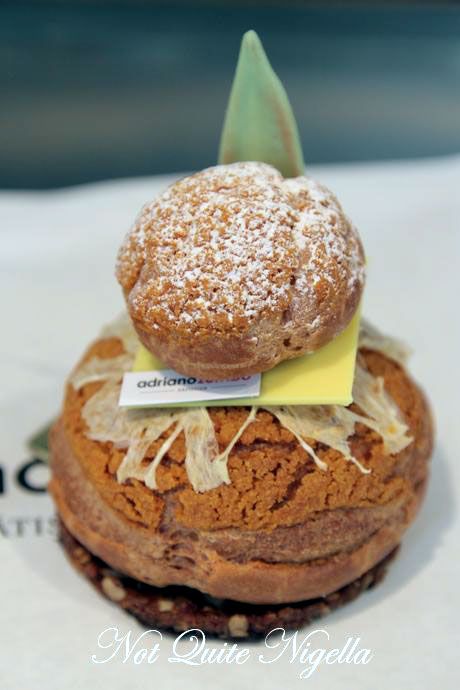 And here are a couple that we didn't try but they were too cute not to photograph... 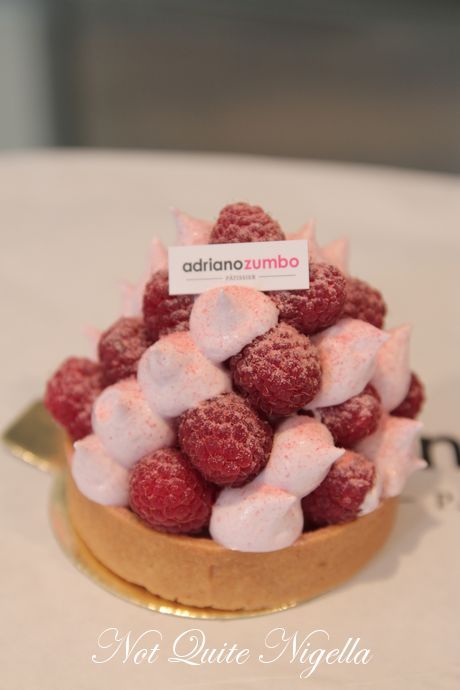 One thing of course is to eat the cakes while you are there. They still haven't mastered the art of packing these and I will refrain from showing you the disaster that befell when I opened the box up at home. It was as though a hyperactive squirrel had gotten into the box and tipped everything over and then dived headfirst into the centre of each cake. Milo and wasabi peas and bits of wheely were everywhere. So eat it there and if you are taking them to someone's house, bring your own box and cooler!

So tell me Dear Reader, what was your favourite tuckshop or cafeteria order growing up? 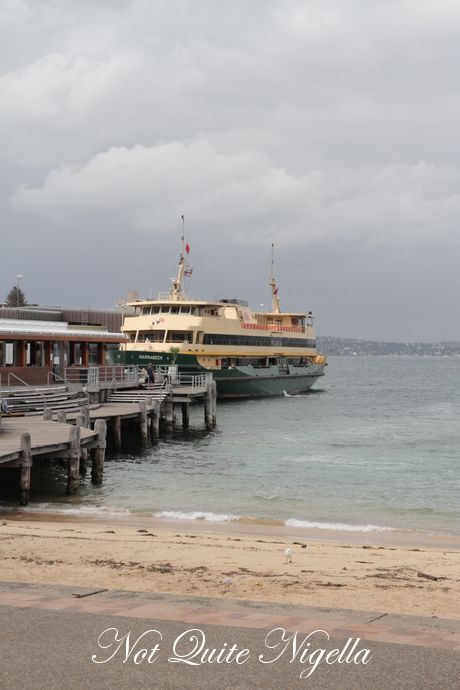 Shop 1a/40 The East Esplanade, Manly (entrance on Wentworth Avenue) 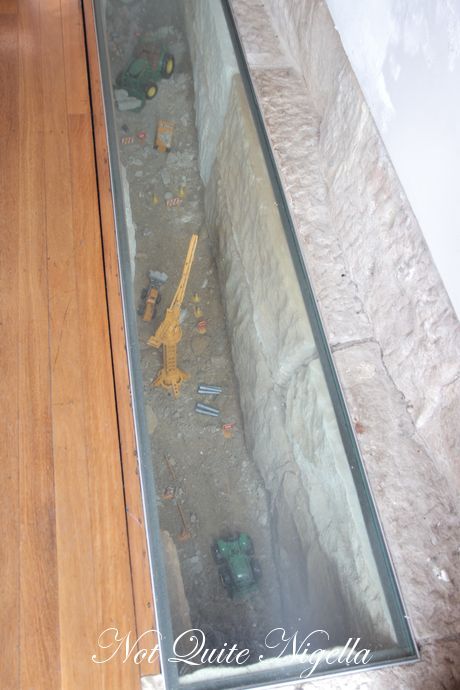