Barbecuing Birds With A Brick 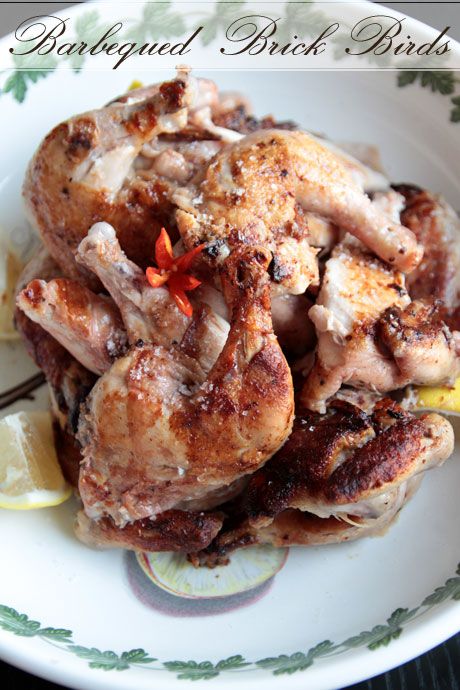 Transplanting one culture into another is always an interesting experience. Take the example of my parents. They were both born overseas and met here as students in Australia  where they married and had children. As a result they and my sister and I became part of Australian culture. However they still do things with their very own twist with habits formed from when they grew up in Singapore and Hong Kong. Sometimes it's as though they only got half the brief! ;)

My father bought a barbecue-because of course that's what Australians do you see. However in our case the barbecue sat covered in the garage, spotlessly clean and only gets to see daylight once every five or so years. Come summer there aren't barbecued spreads eaten on tables on the grassy lawn (the lawn of course has been tiled over as my parents are not at one with nature). The last time the BBQ was used I witnessed my father going downstairs to barbecue the meat only to take it back upstairs to eat in the proper dining room. 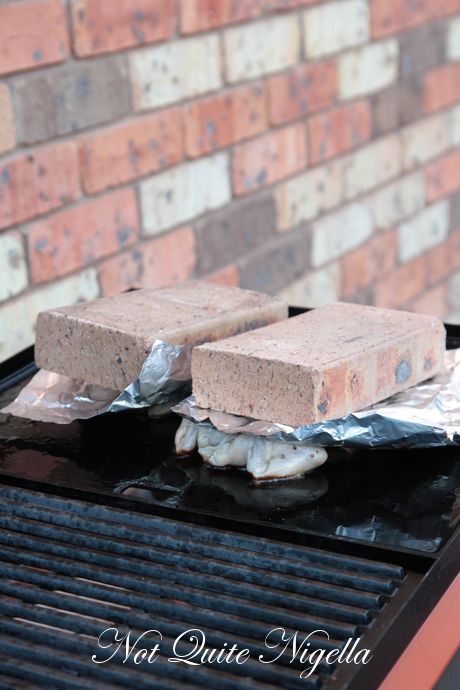 This barbecue recipe necessitated taking out the BBQ  again. It was a bit of a production as it was several years since its last outing but I promised them that it was worth it. You see the whole idea behind cooking a brick chicken or spatchcock is that firstly, splitting the bird in half makes it quicker to cook. Also the idea of using a heated brick on top means that the meat cooks very evenly and that the legs are cooked before the breast has a chance to dry out with the added heat and pressure from both top and bottom. The bricks act very much like a pizza stone in retaining heat. My father, a naysayer if ever there was a definition of one, kept saying the whole time "This won't work, this won't work" and the whole time I was confident that it would.

I used some lovely spatchcocks from The Game Farm that were sent to me. These were range reared spatchcocks without any added hormones. A spatchcock is a poussin or a young chicken and these ones were bred and grown in the NSW Southern Highlands and the Sydney basin. I first saw this method done on the blog Abbotsford Kitchen where it intrigued me. I used a simple marinade from Nigella Bites which involved simply the items I had at my disposal: lemon, garlic, oil and salt and pepper. I like doing spatchcocks as they are easy to butterfly and they are great for portion control too with each bird weighing between 450-600grams. Of course you could easily do chicken and you could do it in the oven rather than a BBQ and just adjust the cooking time as detailed below. 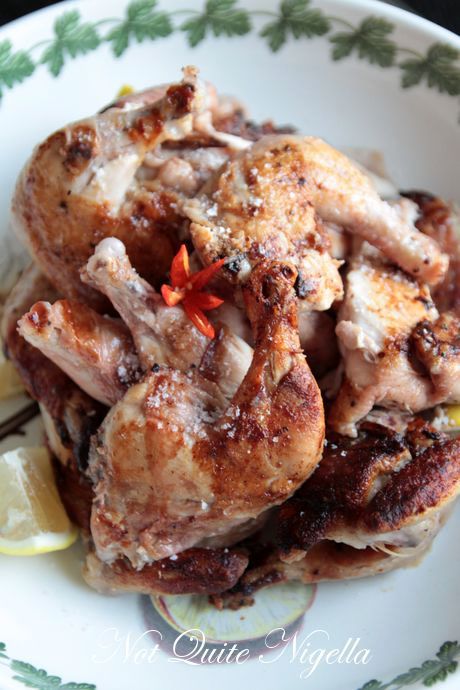 So how were the birds? They were juicy, succulent and flavoursome and everyone remarked on how moist they were - even the breast portion which is usually on the drier side. The cursory two hours marinating imparted a good dose of flavour and aroma and we'd imagine marinating these overnight would be even more exquisite. We cooked these just as the last vestiges of summery warmth were disappearing and with this long, long weekend coming up I thought it would be timely to offer this recipe up to you. And of course we brought these upstairs to eat. I bet you knew that right? ;)

So tell me Dear Reader, do you barbecue a lot? 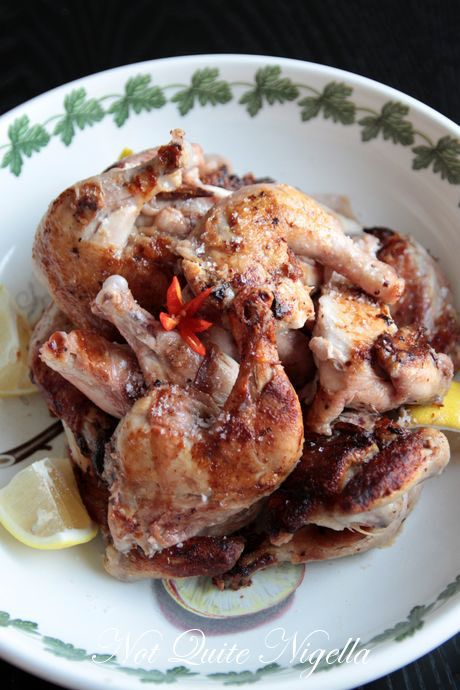 Step 1 - Take two large ziplock  bags (I use 1 bag per chicken or per 2 spatchcocks) and add 1/4 cup of oil, 4 garlic cloves and the juice of 2 lemons and some freshly ground pepper to each bag. Leave the bags open so that you can slide the chicken or spatchcocks inside easily. 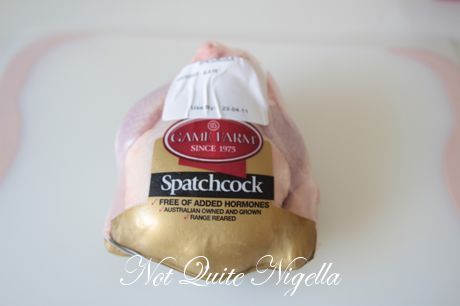 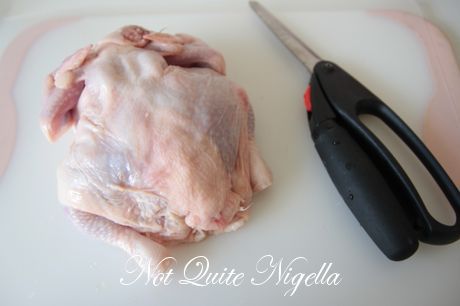 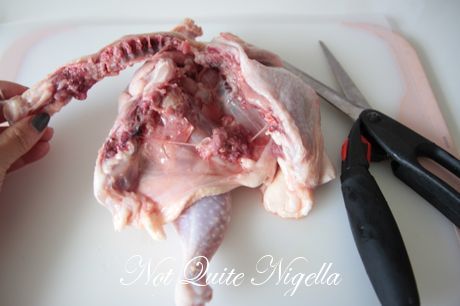 Cut out the backbone with strong, sharp scissors 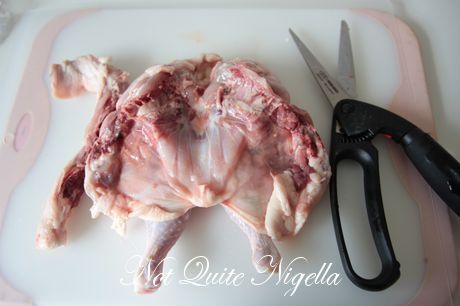 Press down on the chicken to flatten it again

Step 2 - Butterfly the chicken or spatchcock. I find this easiest with spatchcock because and this may sound ghoulish, they have smaller bones so cracking and cutting the backbone out is easier. I use a sharp pair of scissors-the OXO pair I bought on sale seems to do the trick nicely. Take the spatchcock or chicken out of the plastic. Turn the chicken over so that the back bone is facing up and cut along the outside of the backbone on either side starting at the fleshy bishop's nose all the way up to the neck. Remove the backbone-you can use this to make chicken stocks. Remove the opaque pieces of fat from the chicken towards the top and bottom and rinse the inside and pat it dry on paper towels. Place them in the ziplock bags and marinate overnight or for at least a couple of hours in the fridge. Remove from fridge about an hour before you want to cook them to let them come to room temperature. 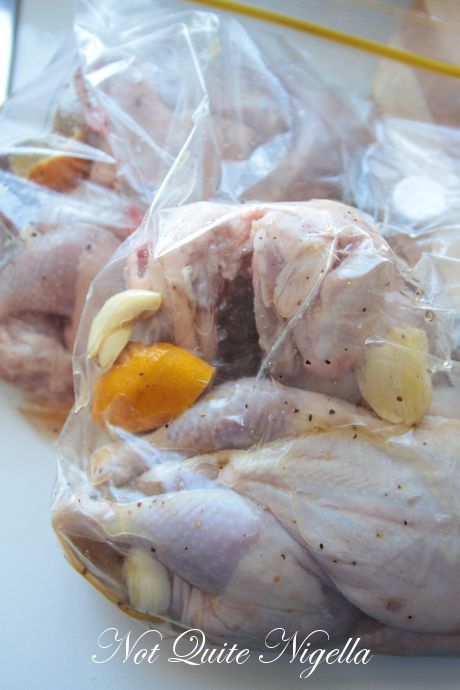 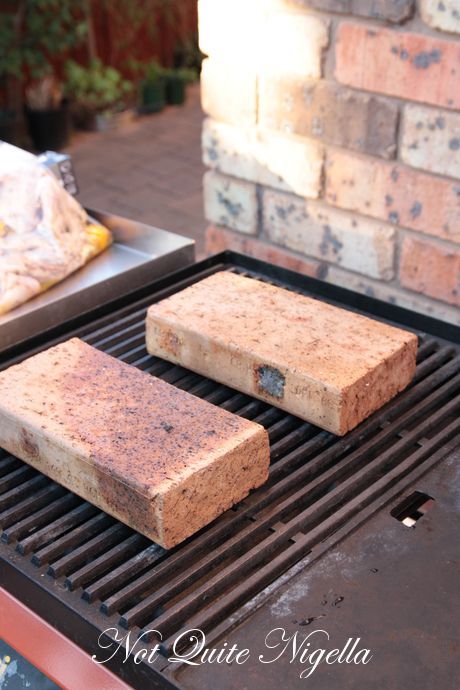 Heating up the bricks

Step 3 - Heat up the BBQ to high or the oven to 225c/440F. Wash the bricks with water and place the bricks on the BBQ or inside the oven to heat up. If you are using the oven, also heat up the baking tray. After about 10-15 minutes the bricks should be very hot. In the meantime tear off enough rectangles of foil that will cover the chickens or spatchcocks so that the bricks don't touch them directly. Using very thick gloves, move the bricks aside and add the extra oil to the BBQ. Place the birds skin side down and flat out. Cover with a piece of foil and then the hot brick and then turn down the heat slightly between medium and hot and let it cook for 10 minutes for the spatchcocks or 20 minutes for the chickens. 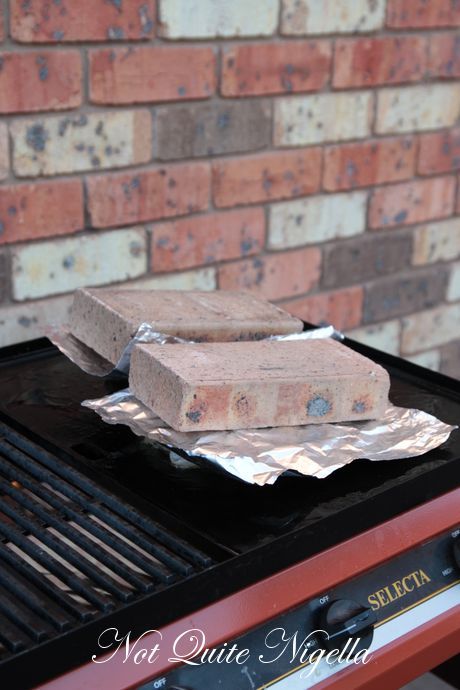 Birds under the bricks! 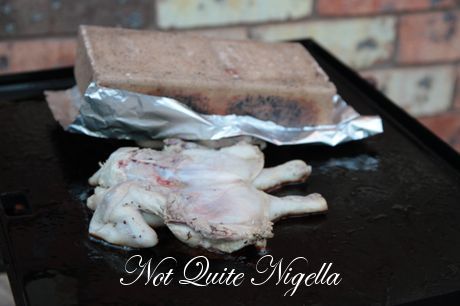 Step 4 - When the time is up, take the brick and foil off the birds and carefully turn over the birds and then replace the foil and brick back on top of the birds and cook for another 5-8 minutes for the spatchcocks or 15 minutes for the chickens. BBQs vary even more than ovens so do check on doneness-the important part to check when cooking is the large drumsticks, if the juices run clear when you pull it gently then it is done.

Step 5 - When done remove chicken from the BBQ and sprinkle with salt and serve jointed-it's very easy to cut up! 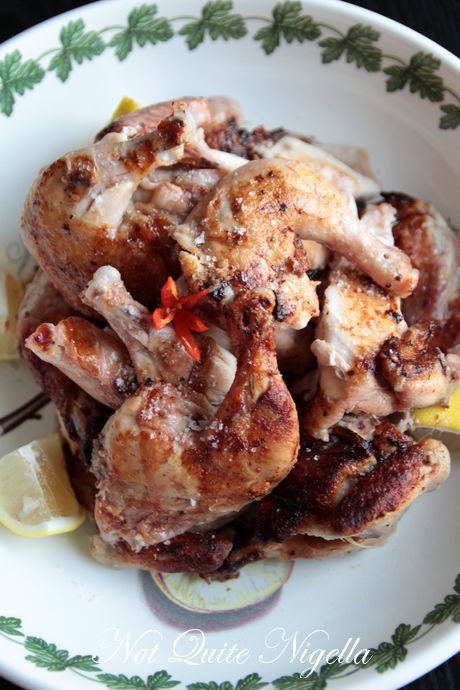