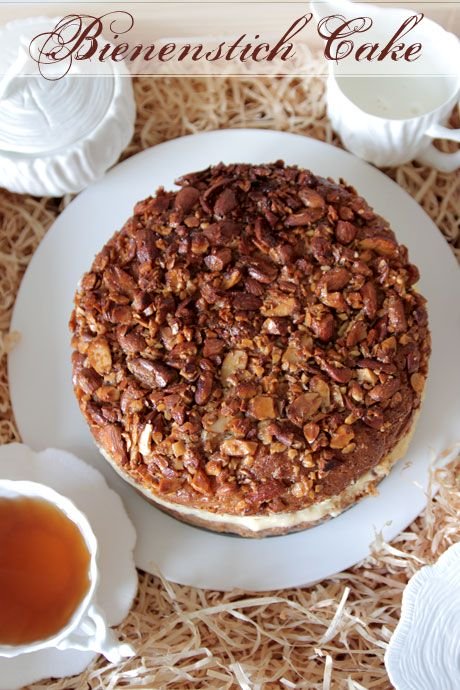 Today Dear Readers is the tale of a disaster. No, not this past weekend's supposed Rapture that never was but The Bienenstich cake disaster to be specific. Oh I had all sorts of mighty plans of conquering the world with this or just bringing this to someone's birthday (who shall remain nameless because I don't want them to ask me where their cake was). But fate decided that it was not to be.

A former boss had once commended my cool under pressure during a meeting to one of my assistants. She likened me to a swan peddling furiously under water while staying calm on the surface. Whilst this was nice, this was not my usual modus operandi. If I am in crisis I let people know! I am not the graceful swan but that clucking chicken running around.  And this is one of those instances. 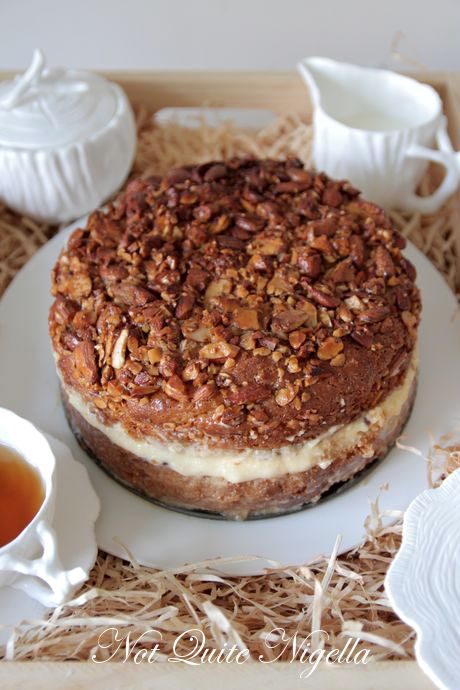 Beinenstich or bee sting cake is a German cake that I first encountered in the Barossa Valley of South Australia. Smitten with this gorgeous soft briochey type of bread filled with custard and topped with buttery sugared almonds I knew it was only a matter of time before I tried to duplicate it at home. Little did I anticipate that it would all turn to custard-literally.

The custard in the centre is a gorgeously sweet and thick concoction. In fact from looking at the ingredients, you pretty much have the same custard as the stuff that fills those amazing Portuguese custard tarts. All I had to do was whip a little butter and then whip the custard and whipped butter together and I would have the custard buttercream of my dreams. Or so I thought. 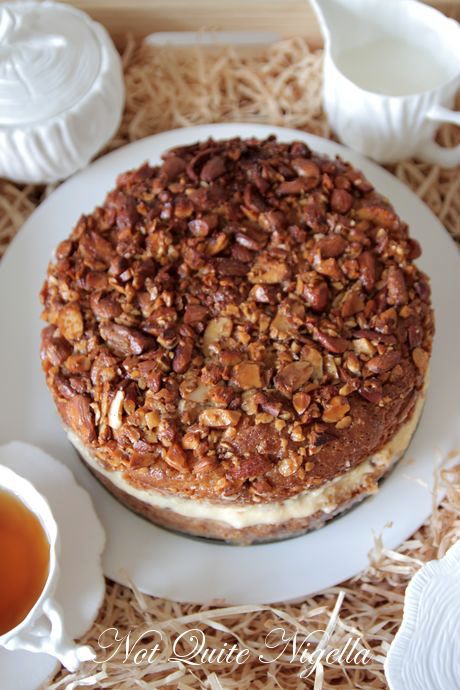 The rest of the cake was done easily. I simplified the dough recipe and it didn't seem to suffer for it and despite the fact that I had run out of slivered almonds and just used roughly chopped and sliced almonds (I started slicing them individually before realising that I had better things to do so I popped them in the food processor for some rough love) the cake part baked to a glorious bronzed beauty. I split it and then went for the custard. It seemed too watery  and liquid so I put it in the fridge for half an hour hoping that it would firm up, much like a  regular buttercream does.

I opened the fridge and to my horror refrigeration had turned it grainy. This was the custard that only just before was silky soft and gorgeous. I consoled myself with the fact that if The Rapture actually happened then I wouldn't have to deal with the mess. Of course The Rapture was an anticlimax and the world kept spinning and I wondered what would be the explanation will be for this second round of rapture fail? 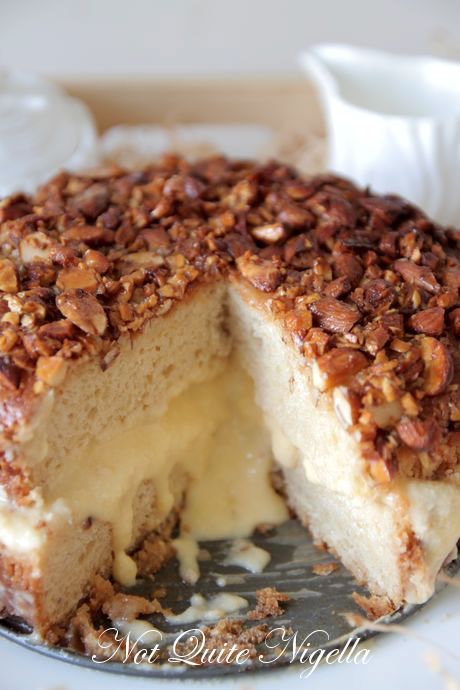 This Bienestich cake if you look at it from the top looks just fine and perhaps Mr NQN seeing this as over 6 feet tall would see no issues at all. But as a foot shorter all I can see is le disaster! So there it was, custardy inner dribbling out of the centre and I stuck a fork in just because I had spent so long baking the damn thing. The bread was sweet and soft sweetened and softened even more by the custard. The lemon zest and cinnamon gave the bread a bit more mystique and interest and the baked on caramelised butter and nut layer was just sticky, sweet nutty heaven and had appealingly dripped down the sides of the bread.

Is there such a thing as a disaster story with a deliciously happy ending? Perhaps in the case of The Rapture and this cake there is! 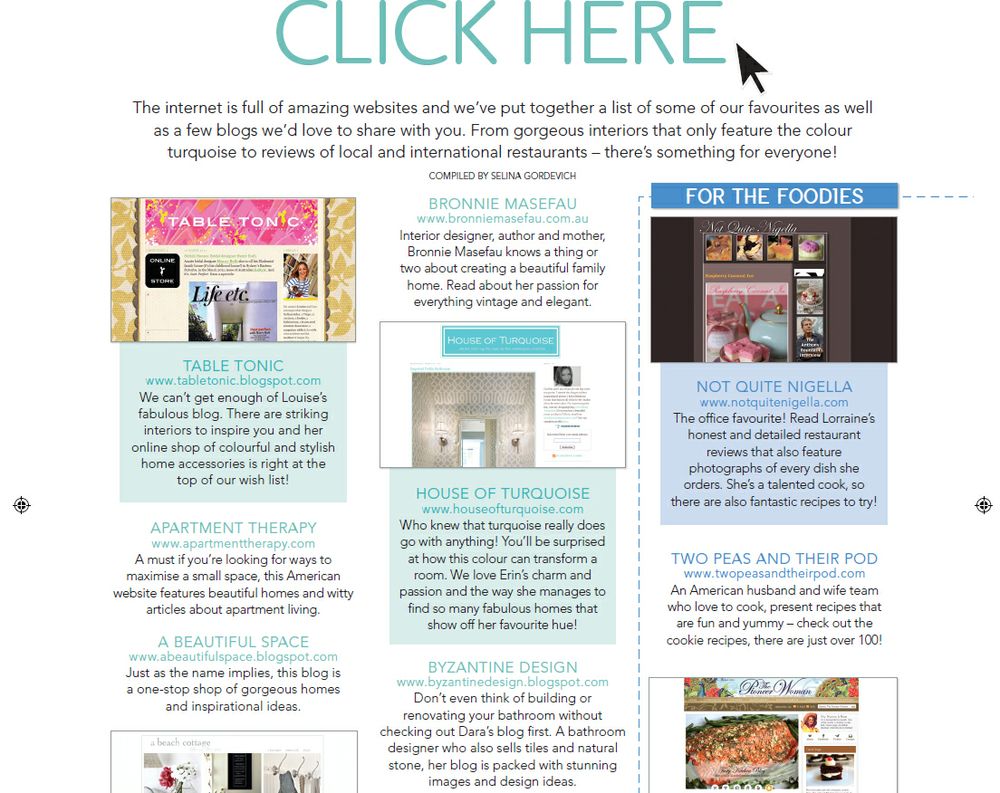 Please click to enlarge. As seen in HOME ideas www.homeideasmagazine.com.au

And in some much less disastrous news (much the opposite in fact), I was featured in the new issue of HOME Ideas magazine! I'm so honoured to be one of their "Best Clicks" and very, very chuffed to be the office favourite blog too! Time for a Happy Dance! :)

So tell me Dear Reader, have you ever had a cake or cooking disaster? And are you a calm person under pressure or do you panic? And did you believe that the world was going to end the other day or know anyone that did? 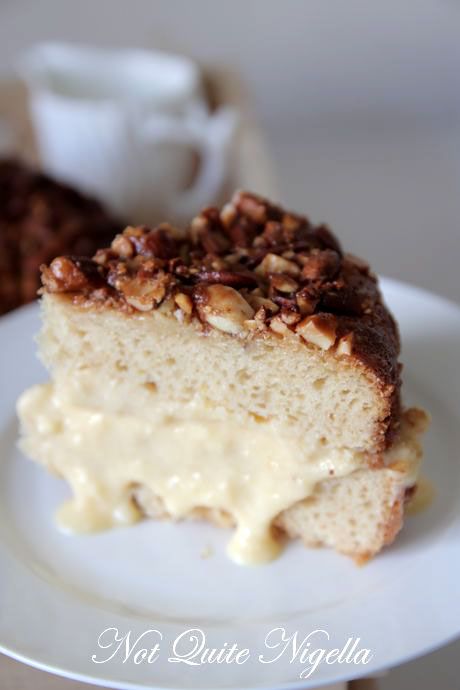 I will warn you that the custard recipe below turned out runny for me. I would suggest adding some custard powder to the heated milk mixture (about 1/2 or 2/3 cup of custard powder should do) to it and treat it like a vanilla custard slice that will set firm.

For custard filling* see note above about custard powder

You will also need a round springform tin 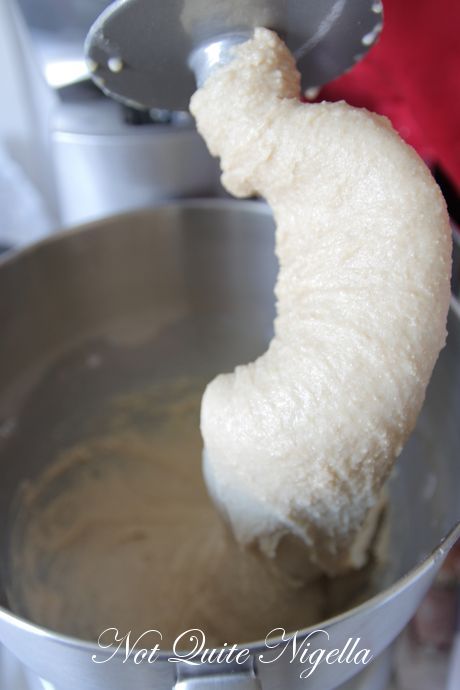 Step 1 - In the bowl of an electric mixer fitted with a dough hook mix the flour, yeast and sugar and knead for about 4-5 minutes until elastic. Add the butter, eggs, salt and lemon zest and mix for another couple of minutes until it forms a cohesive but sticky dough. Grease a large bowl with butter or oil and place the batter in the bowl and cover with cling film. Place in a warm area to prove and rise for an hour or so. It was quite cold so I turned the oven onto 60C and then turned it off and placed it in there where it rose better. 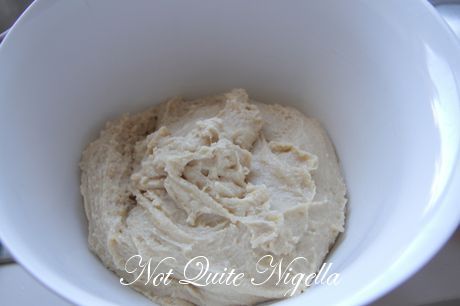 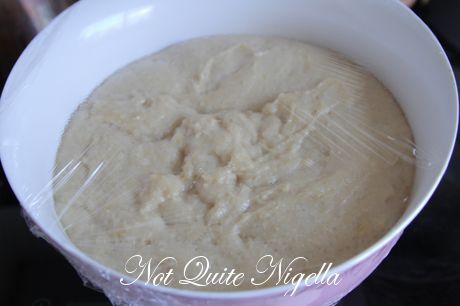 After rising in lukewarm oven 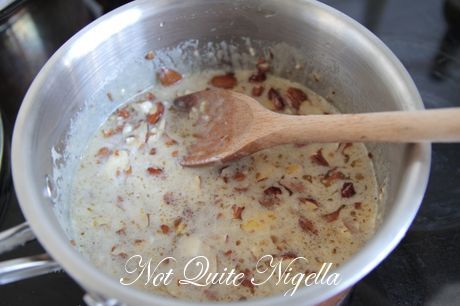 Step 2 - Meanwhile make the topping by combining all of the ingredients to a small saucepan and stirring on low heat until the mixture thickens. 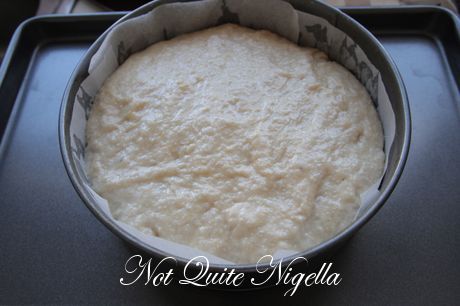 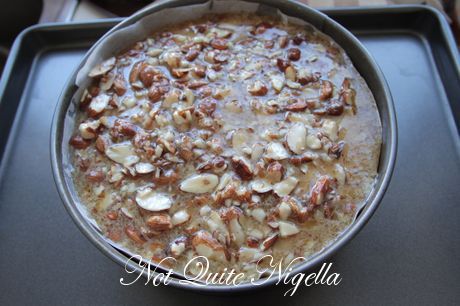 Step 3 - Preheat the oven to 170C/340F. Grease a 21cm/8.5 inch springform tin and line the bottom and sides (line all the way up the sides as it rises high) with baking parchment. When the dough has risen place it in the lined baking tin, cover with cling film again and allow it to rise again for another 30 minutes. Once it has risen again spread the topping mixture over the top of the risen dough and bake for 30-35 minutes. Cool in the tin. 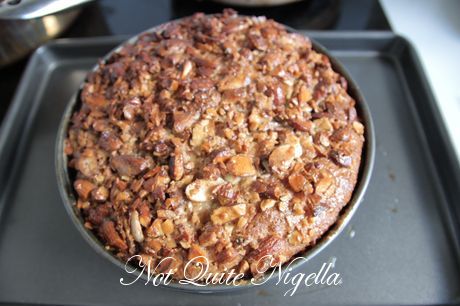 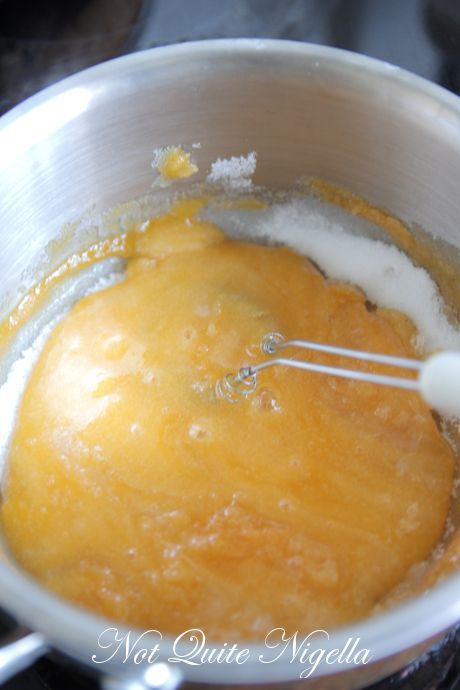 Eggs and sugar go from this colour... 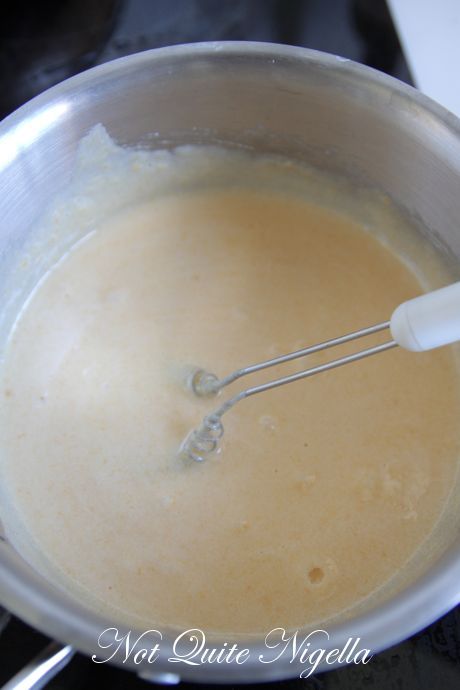 To this pale yellow after whisking 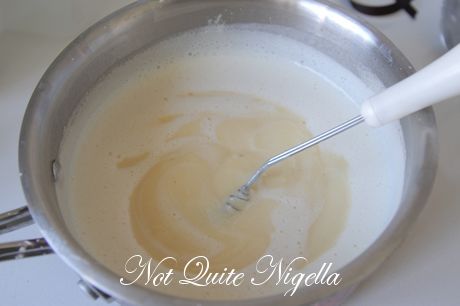 The resulting custard once milk is added

Step 4 - While you are waiting, make the custard filling. Bea the yolks, sugar, vanilla and custard powder (if using, see note above) in a heavy based saucepan until the yolks turn from a sunny orange to a pale yellow. Add the cornflour and milk and heat gently stirring constantly to ensure that there are no lumps . Cool to room temperature but do not chill. Whip the butter until it becomes light and fluffy. Beat the whipped butter into the cooled custard mixture. It should be smooth and hold its shape. Chill it to make it firm. 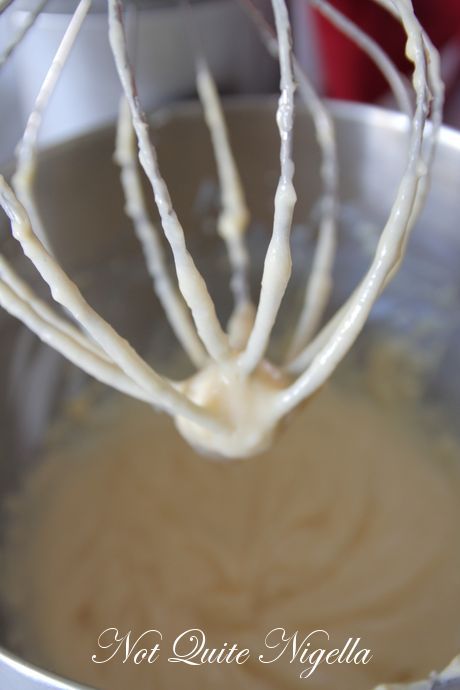 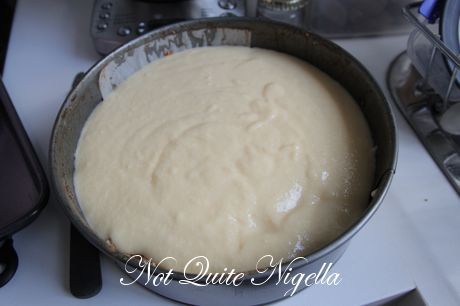 Step 5 - Remove the cake from the tin once cool and slice in half horizontally. Place it back in the springform tin and spread the cake with the cooled custard and then place the other half on top. Cover with clingfilm and chill until set-about 1 hour. 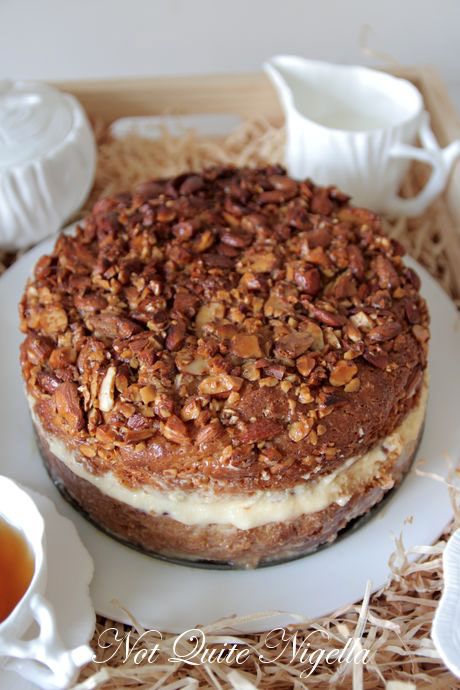 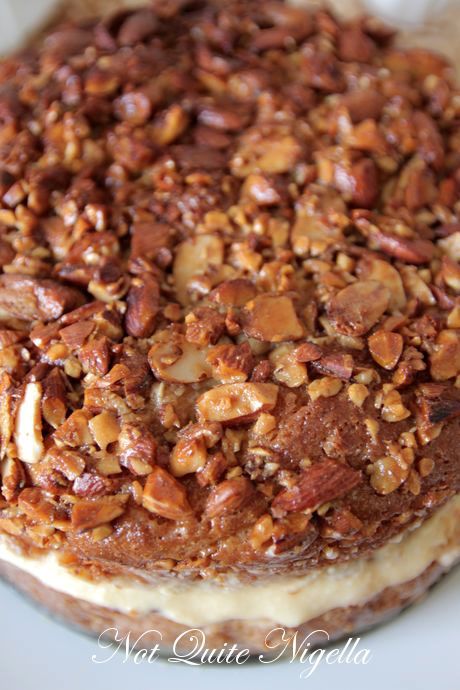