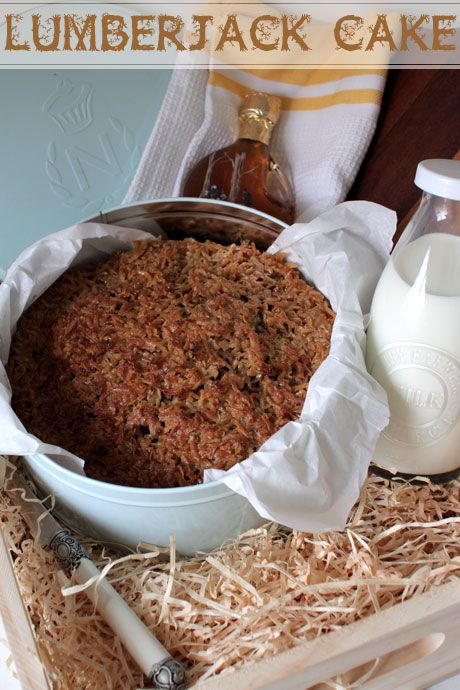 I mentioned before in my To Market To Market post that because I travel so much and Mr NQN still has to work at his own job, he often has to fend for himself. It can be a sorry state of affairs. I was lying back in my lovely suite The Louise in the Barossa Valley when a phone call came through. It was Mr NQN. I asked him about his day but got the feeling that he wasn't feeling quite right and that he was a bit out of sorts. My first instinct to fix any situation is to ask someone "Have you eaten?" so I asked him and he admitted that he had attempted to eat or more correctly fix himself something but "the cupboards are full but there's nothing to eat". 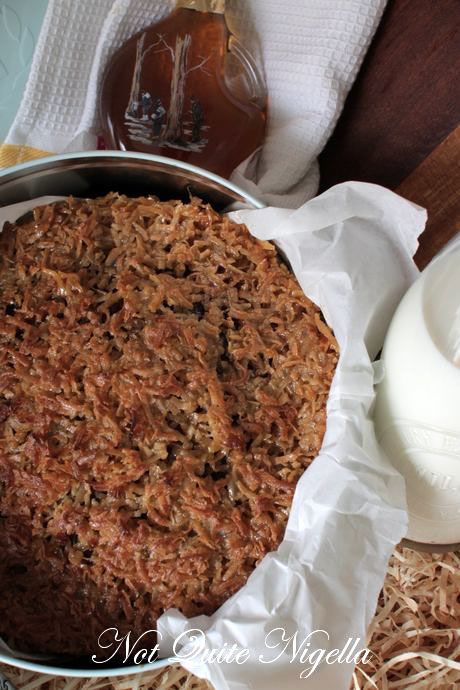 I laughed. It's true the cupboards and both pantries are completely full. I have one of those pull out pantry doors and I'm waiting for the day that the handle breaks because of its burgeoning load. Of course there are unusual things like truffle salt, classic jus and paperbark but there is also lots of things to cook and eat. Just nothing that he felt like he could. There is also an enormously full bookshelf full of cookbooks too and access to the internet but I realised cooking is not his thing and I felt terrible that I had left him there to starve. I guess I was hoping that he would develop some sort of cooking skills during the time that I was away-much like he hopes that I'll develop coding or sporting skills if he puts me in a situation that requires them of me.

This time, before I went away, I had a bit more time. I made him huge slabs of food (and I was only going away for four days) and I thought now was the best time to make a Lumberjack cake. I first tried it while in the Snowy Mountains at a gorgeous little cafe called The Lott. I was with Queen Viv and she and I were both simultaneously attracted to it for the name. We both peered at it within the cabinet-another thing that sealed its fate was the fact that there was only one left which meant a) it was so good that lots of people wanted it or b) the same logic applies to limited edition handbags "There's only one? Well then I must have it!". 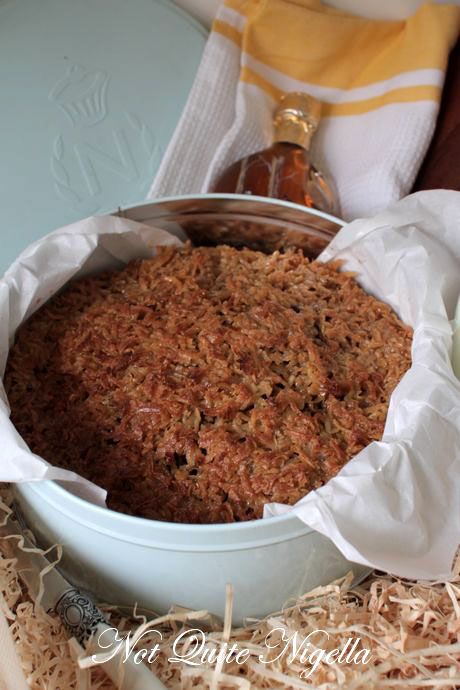 We tried it and it was delicious. Moist and dense and sweet with dates and apple it had a moreish, sweet chewy coconut topping. "I'm so making this for my very own lumberjack*" I said to Queen Viv. I would make this to sustain him while I  was away. There would be no starving man to come back home to and I would keep it at a safe distance from me trying just a slice before I had to go away.

The recipe is a melange of different ones and although the origins are unclear, some have said that it comes from Canada. I dipped into my precious maple syrup stash and used some in place of the brown sugar in the butterscotchy maple coconut topping. It was easy and straightforward to bake and I cut into it. It was much lighter and fluffier than the one we tried at the Lott cafe. It was similar to the cake part of a sticky date pudding but more moist with the apples. The topping of course is my favourite part. I didn't have shredded coconut which is slightly drier than the moist coconut flakes that I used. When I opened up the tin to show Mr NQN a huge smile spread on his face and he just said "Niiiiice".

*lumberjacking in this case involves sailing, cycling and working on a computer, not actually felling trees which would go against his hippie tree hugging upbringing ;)

So tell me Dear Reader, do you make food for loved ones before you go away? Or are they self sufficient? 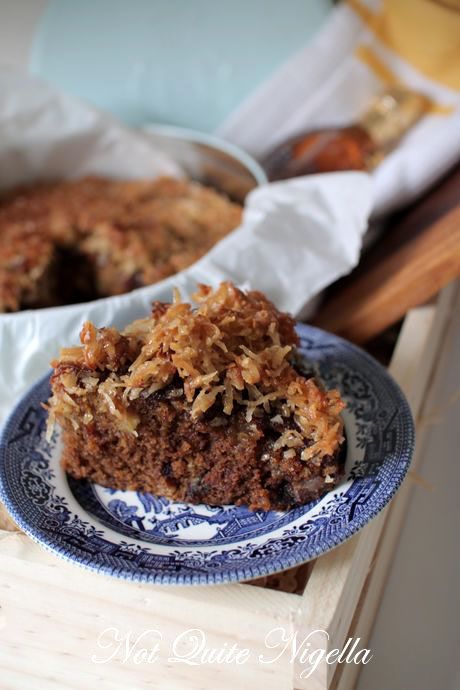 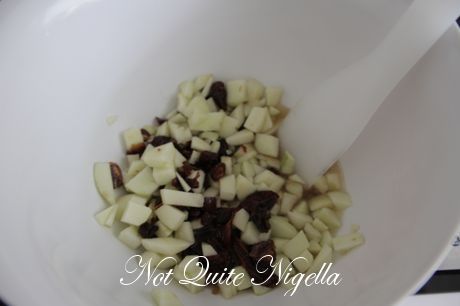 The fruit soaking in the bicarb water to soften it

Step 1 - Preheat oven to 180C/350F. Line a round 9 inch springform tin with butter and baking parchment. In a bowl, place the chopped apple, dates, bicarb and boiling water and the bicarb should fizz. Allow to stand for 10 minutes making sure that the fruit sits in the water. 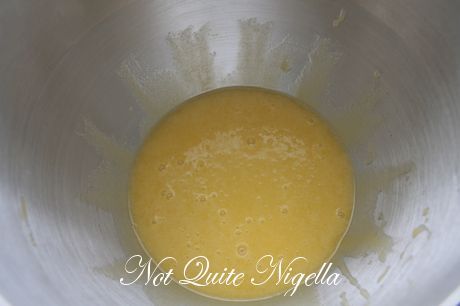 Eggs, sugar and oil-ok not a fascinating picture but it looks like the sun!

Step 2 - In the bowl of an electric mixer with a beater attachment, beat the eggs, sugar and oil for 3 minutes.  Add the apple and date mixture, water and all, to this mix and fold to combine. Then fold into the salt, flour and baking powder folding gently, ensuring that it is completely mixed. The batter is quite wet at this stage so I always put the springform tin on another baking tray as I don't want it to drip onto the bottom of the oven. Bake for 50 minutes or until a skewer inserted in the centre comes out clean. 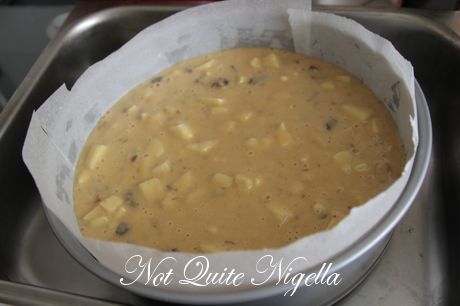 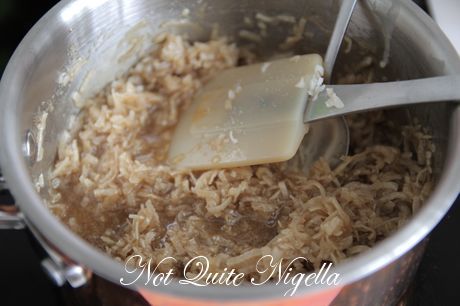 Step 3 - Meanwhile while the cake is baking, make the topping. In a small saucepan on low heat, melt the butter along with the cream, brown sugar, maple syrup and vanilla. Once melted and it becomes a rich butterscotchy maple sauce, add in the coconut. No need to toast the coconut as it will go into the oven where it will get toasted. 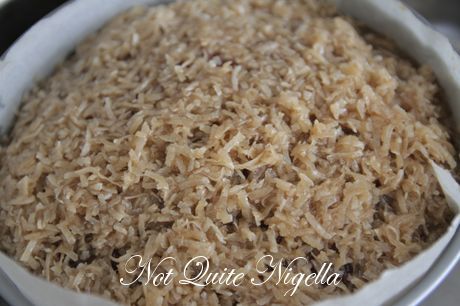 Spreading the coconut over the top, ready to go back into the oven 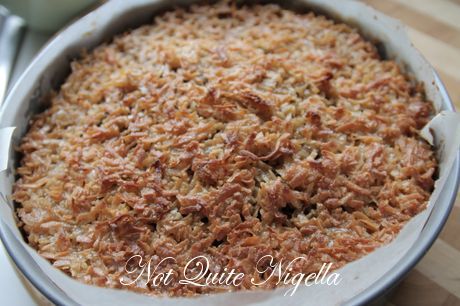 Step 4 - When the cake is done, take the tin out of the oven and then spread over the topping reaching to all of the sides. Place cake in the oven on the same temperature and bake for another 20 minutes until the topping is golden. Serve to your lumberjack of choice. 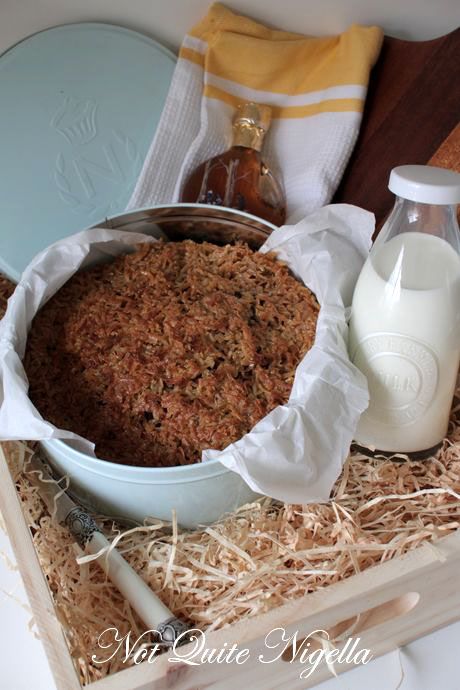