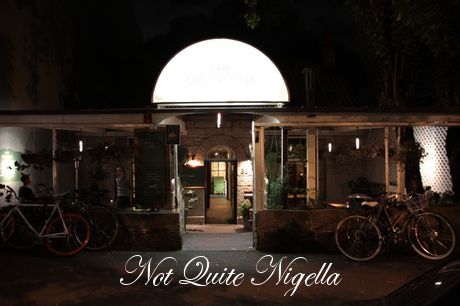 I am staring at my phone. It is 4:55pm and I am awaiting a text message which will get me one step closer to knowing where I am dining this evening. You see I have no idea where I am eating tonight except that I know it is in Sydney's Eastern Suburbs. At 5pm my phone beeps. The suburb is Darlinghurst and there are instructions to head there and at 6pm the address will be given. I don't quite have the inclination to wander the streets or bars of Darlinghurst by myself so I sit tight and wait until 6pm to receive further messages. 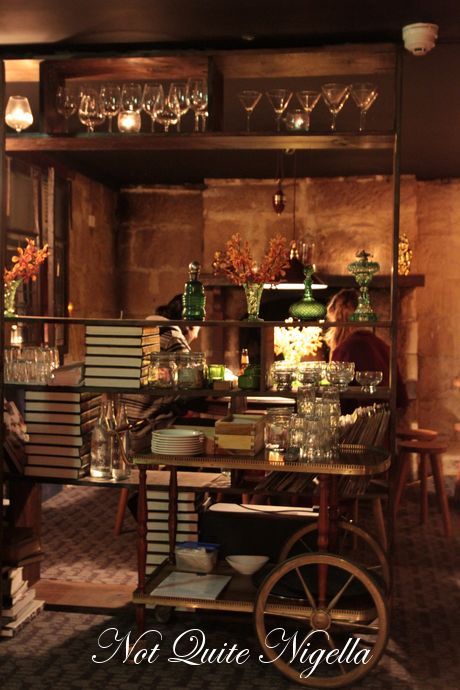 At 6pm a simple address is given: "32 Burton Street, Darlinghurst". Hmm I say to myself, I know that address! I pop it into google and up pops The Commons, which was formerly The Pond, a pop up restaurant I had visited a while back. Built in 1842 or 1850 it was formerly a dairy with convict common gardens located on the corner of the site. A small creek ran down from Taylor Square to Wooloomooloo past the property. During the sixties John Singleton had his first office there (he and a friend planted the giant Jacaranda in the backyard with a plaque that read 'As long as we live, we shall grow'). Then during the seventies the building became a restaurant called The Different Drummer before changing hands where it then lay dormant for years. The building owner posted a sign outside that asked passers-by for suggestions on 'What do do with this cottage? Interesting ideas invited'  and apparently he liked this idea just fine. 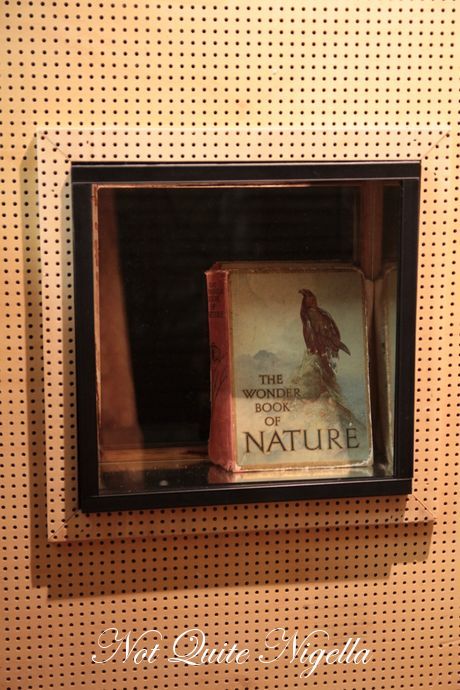 I make my way there and arrive at The Commons. Bicycles are lined up outside and the whole building is actually an 160 year old structure that has been renovated with greenery and lots of wood. In fact the come hither comforting Wintery smell of a wood burning stove pervades throughout. I ask where the Secret Foodies dinner is being held and am directed "Downtown". Downtown means the basement level bar of this renovated 160 year old house where pre 1960's cocktails are served and little plates of food are offered. I walk past the kitchen and the chef gives a friendly "Hi!" and past the vintage books in the display cases. 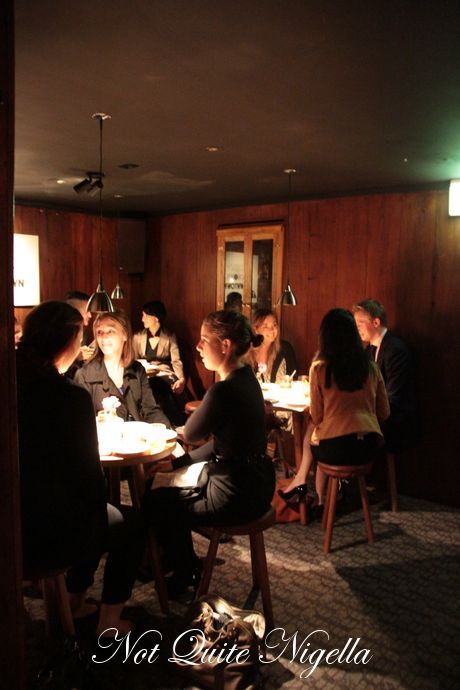 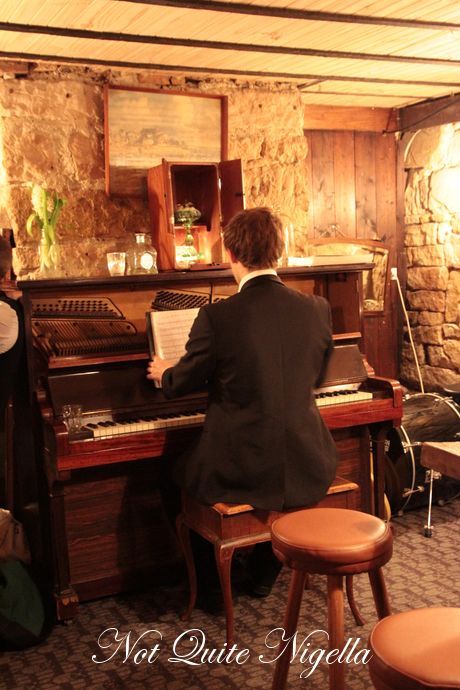 I join the three secret foodies that are already gathered and meet Alex aka Ms Darlinghurst who has organised the Secret Foodies dinners. So far she has held 24 of these events ranging in size from tonight's 14 people up to 50. The concept is simple, people sign up and pay for a dinner knowing a vague location and a date and time and on the day, two hours beforehand they receive the suburb and one hour before they receive the address. The restaurant is usually somewhere new although at times there may a golden oldie being rediscovered thrown in. 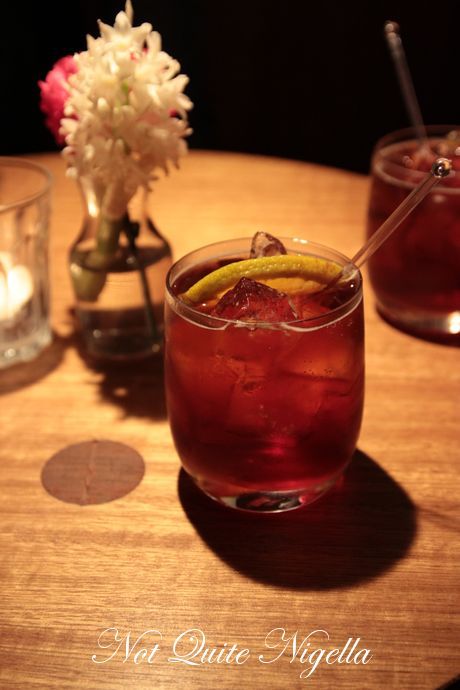 I start with a negroni sbagliato which is Campari and sweet vermouth on ice with prosecco. It has that familiar bitterness from the Campari plus a sweetness from the prosecco and is quite potent indeed! And even though I seem to be the only person by myself (note to most, you may want to come with a friend) people are friendly and chatty. 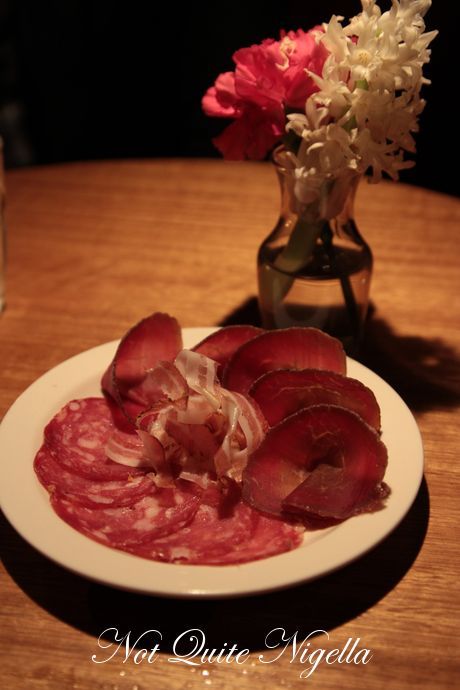 A selection of mixed antipasto plates come out. The first plate is the salami, breseola and pancetta which is excellent. Soon after, the rest of the 14 people arrive and fill up the Downtown section that we're occupying which was in fact the former servant's quarters. 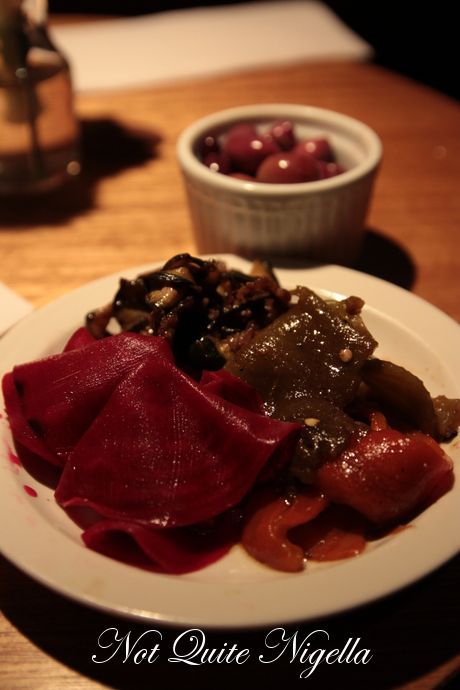 Another table gets a vegetarian antipasti and we get a bowl of olives. We don't get the antipasti plate and the waitress tells us that only three plates of each will go out whereas there are four tables of us which seems like a bit of a glitch as people were interested in trying everything. Also on the menu there are mentions of three plates which we didn't get which is quite disappointing as they sounded rather good. They were cheddar and pickles; potato skins and ketchup and tumbleweed calamari as well as bread and oil. I didn't see hair nor hide of these so I'm not sure where they went! 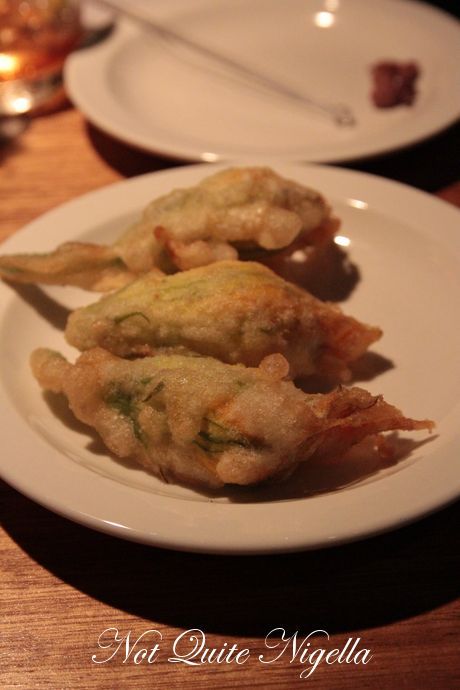 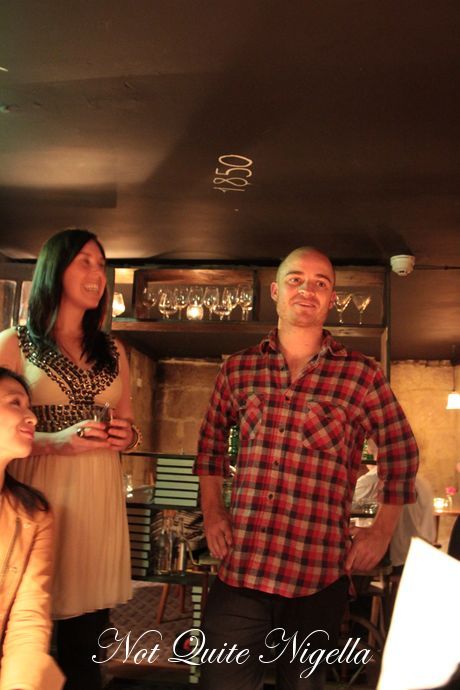 Alex asks Rob the owner to come out and have a chat to us which he does. He and his friends built the tables and stools that we're sitting on (in fact they are blown up versions of Dutch milking stools). The bookshelf and the area behind called "The Library" are used for spirit masterclasses and careful not to take out or browse one of the encyclopaedias that sit on the bookshelf as the books help keep the bookshelf upright as part of a carefully balanced act! 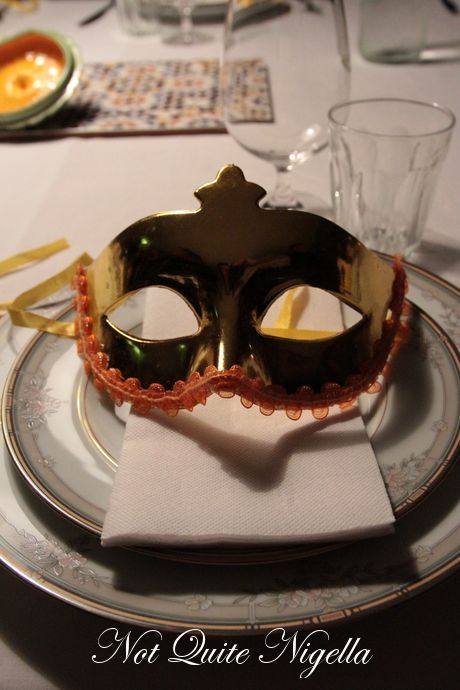 After spending an hour "Downtown" we head "Uptown" aka the private dining room. The table has been set up with masks which we can put on for photos to make it a truly "Secret Foodies" experience.  Wines and mineral water are included in the price and this evening features two red wines. 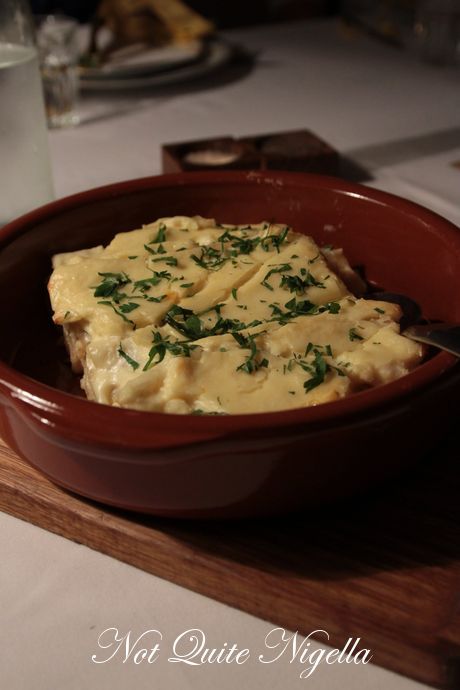 We are told that the pasta entree is made by some rather grumpy Italian nonnas! The pasta is a vegetable cannelloni with lashings of bechamel sauce. It's very creamy and filled with some mushrooms and is comforting although I would have preferred some more mushrooms. 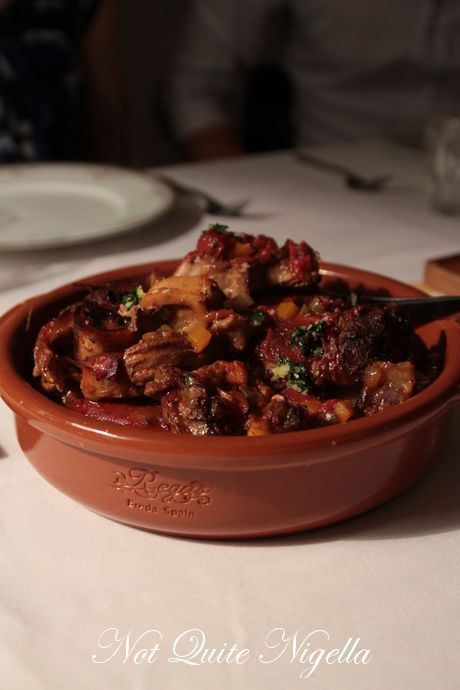 Our mains arrive. The veal osso bucco is divine-rich and full of flavour right down to the core. The rice is soft but not soggy and also sings with flavour. The prize of course is the marrow which needs to be picked up with the hands and sucked dry. It's so moreishly rich and flavoursome that I go back several times for more servings. 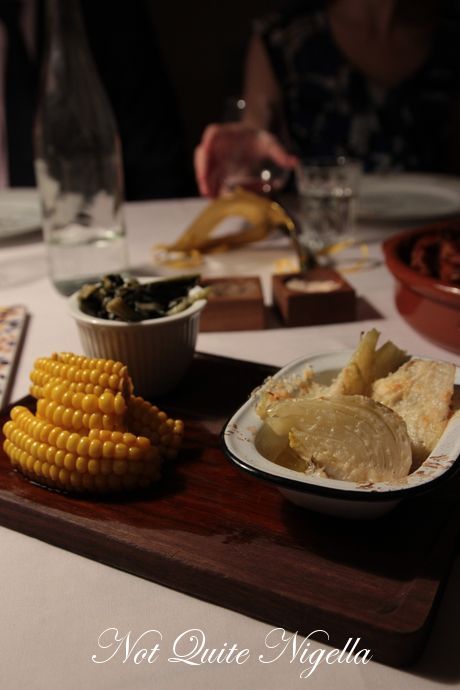 These vegetables come from Windsor and Hawkesbury and about 75% of their produce comes from within 200kms of Sydney. The Best of Farm vegetables are a mix of Italian cima de rapa which is tasty and cooked until soft, fennel gratin which is soft and lightly aniseedy with a salty hit from the cheesy crust and the corn which needed some seasoning. 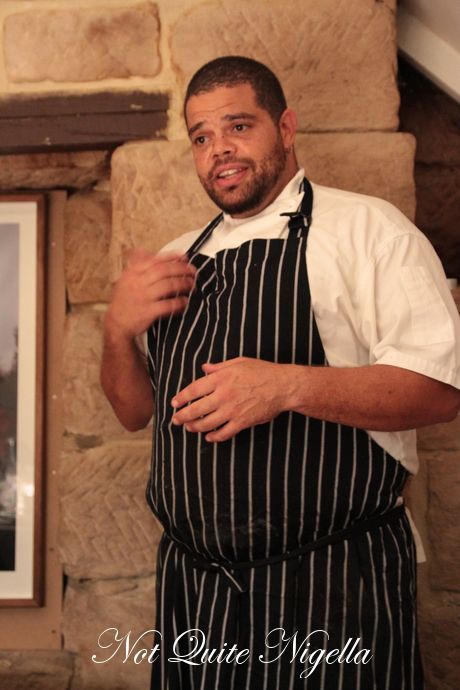 After the mains Alex asks the chef Galia (just "G" to everyone) the chef to come out. Prior to living in Sydney he was in Canberra and he's friendly although he admits to knocking back a couple of drinks before coming up to see us (chefs are a shy bunch!). Galia tells us that the emphasis is on "simple not pretentious food" as he feels that Sydney has enough of the latter. Alex asks him some questions (his favourite food is Chinese, he loves beer and his latest kick is gin and he's a car fanatic) and the floor is then opened up to the diners to ask him any questions. 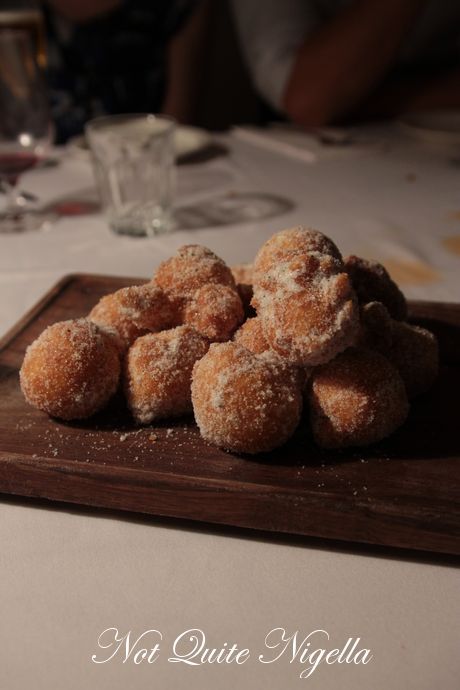 The final bow has to go to the house made donuts brought out platter style with rosemary spiked sugar sprinkles aplenty. The smell of fresh donuts is of course impossible to resist and we pop a hot, fresh donut in our mouths and savour each bite. Some debate whether vanilla bean ice cream would have been a good accompaniment and I agree it would be a great match indeed.

The clock strikes 11pm and it feels like we've only started.

So tell me Dear Reader, do you like surprise dinners or surprises in general or do you like to know where you're going to eat ahead of time? 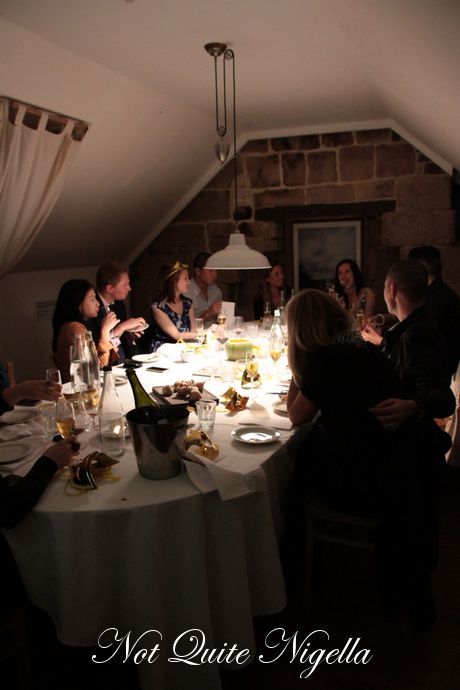 NQN dined as a guest of Secret Foodies 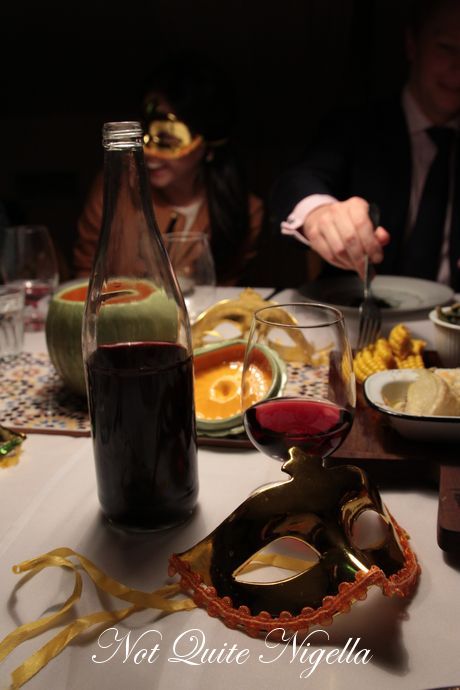