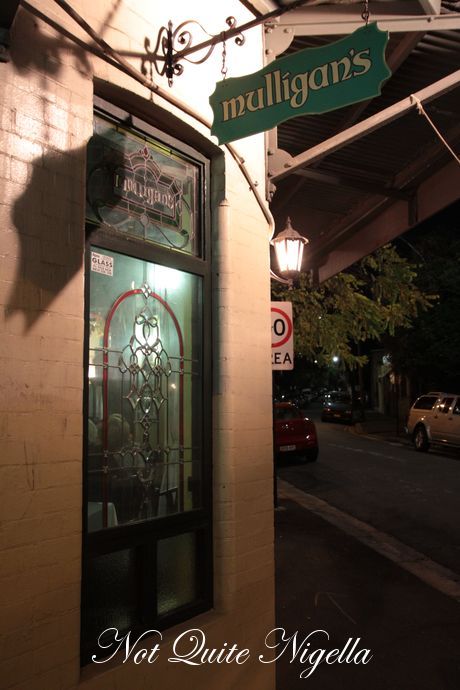 For many years now there has been a restaurant that I have passed on the way home. It is sometimes lit up and at other times pitch dark depending on the evening, There are also broad banners proclaiming "Restaurant Of The Year". And every time we say to ourselves "We must check it out". And then one night we drove past and saw the magic words "Psychic reading". Now I know this may be a red flag to some of you but to people like us it is like a curled finger beckoning at us to come in. 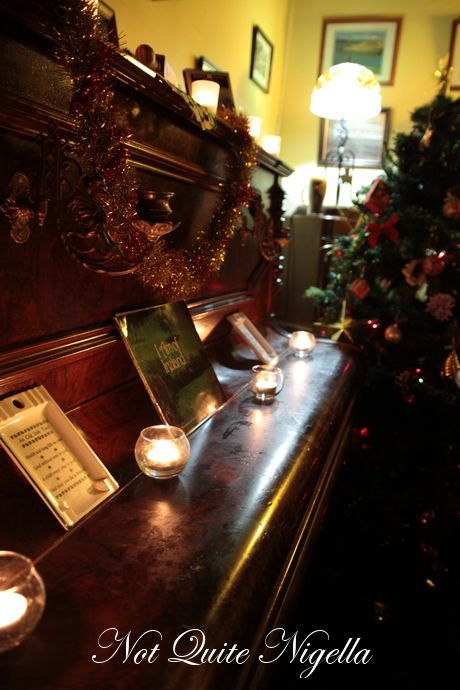 Now Queen Viv being a bit of a bossy boots proclaimed that she didn't want to eat there until Winter. Turns out she was right, for this freezing cold evening we enter Mulligan's and rubbing our cold hands together we make our way to a table by the crackling fireplace. And trust me that a place in front of a fireplace in the current Sydney cold is the place to be. This evening is so cold it seems that Jack Frost has truly arrived and lined our coats with ice. 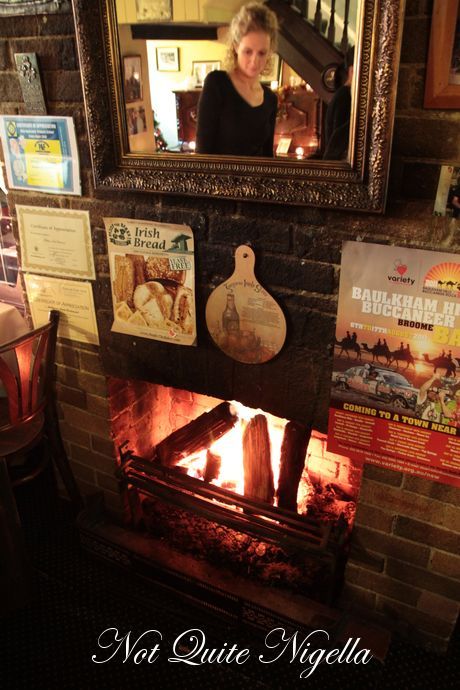 Eilleen the hostess is instantly welcoming and speaks with you like you are a long lost family member. She is gentle but firm when people have to be turned away without a booking, and there are several that we witness having to take the long, cold route back home. She tells us that they're booked up for weeks to come and every Thursday night they have psychics upstairs telling people about their futures. Tonight there are four upstairs including some well known ones that have written books and featured on television. 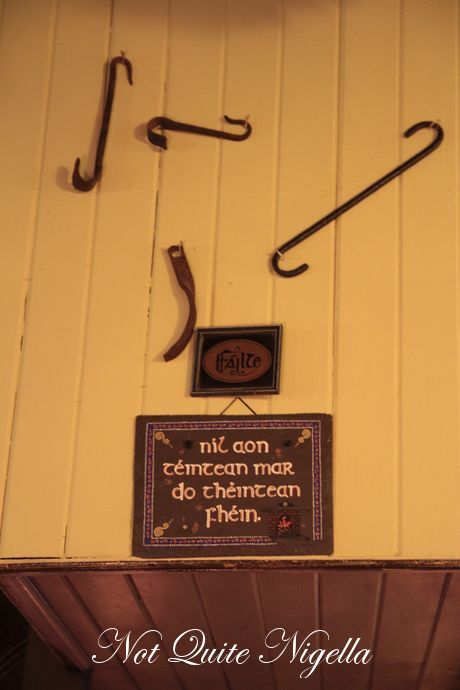 I check with Eilleen about the psychics-we have come here tonight as Queen Viv is going through a odd patch in her life and we felt that the psychic visit would do her well. Eilleen's face lights up and tells us that there is a table at the front where there is a spirit and that she was clued onto it as she could smell perfume there. Then this afternoon when all four psychics arrived they all saw the same blonde girl sitting there. She also tells us how she and her husband Sean stay here while the restaurant is open in order to take early morning deliveries and closing and opening doors are a common occurrence and objects have been known to move and hover. 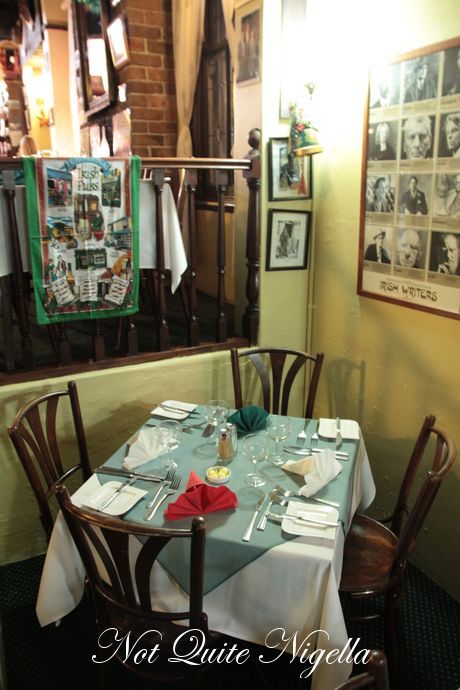 The table with the spirit! 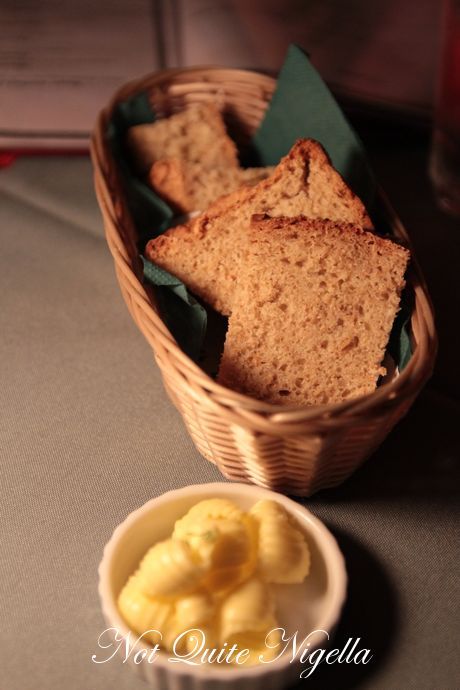 We ponder the menu while eating the soda bread. Two courses are $45 and desserts are an extra $15. There are specials every day and given that there is a Christmas tree up for Christmas in July we can't help but complete the fireplace side experience by ordering the Christmas roast dinner. This Irish soda bread is moist, fresh with a delicious crunchy crust and with the texture unlike bread and more like cake-it reminds me of a pumpkin bread that I make. I realise that I haven't seen butter curls in the longest time. 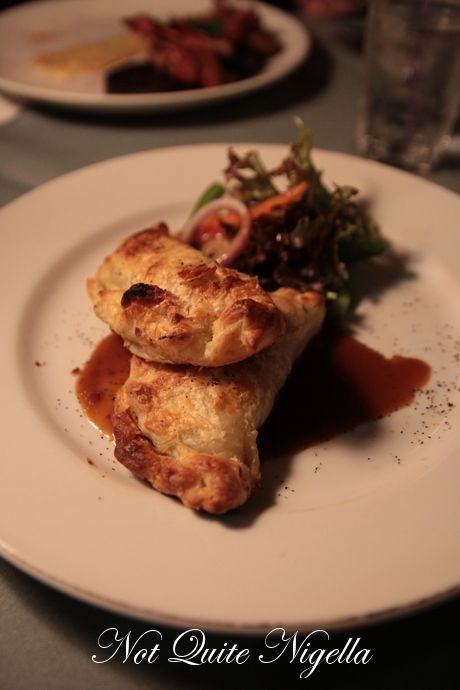 The first item that arrives are the parcels from Carlow which are shortcrust pastry wrapped chicken and mushroom and they are fantastically moreish. Miss America declares "I could eat a plate full of these". They come with a creamy red wine sauce and the buttery pastry is flakey and comforting with just the right amount of filling. 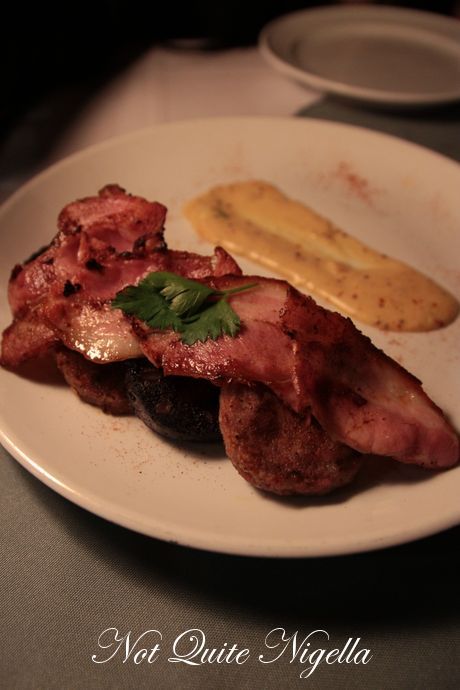 Most of us are fans of black pudding except for Miss America. It comes as two slices each of black and white pudding with a generous amount of bacon and a lick of mustard sauce. The white pudding is white peppery and oatmealy and the milder version of the two whilst the black blood pudding is richer but not overtly so with just the right amount of seasoning and doesn't taste too metallic as some can from the blood. They're both good and pairing it with bacon and the mild mustard sauce makes them even better. "It tastes like the pudding was fried in bacon fat" Queen Viv says with approval. 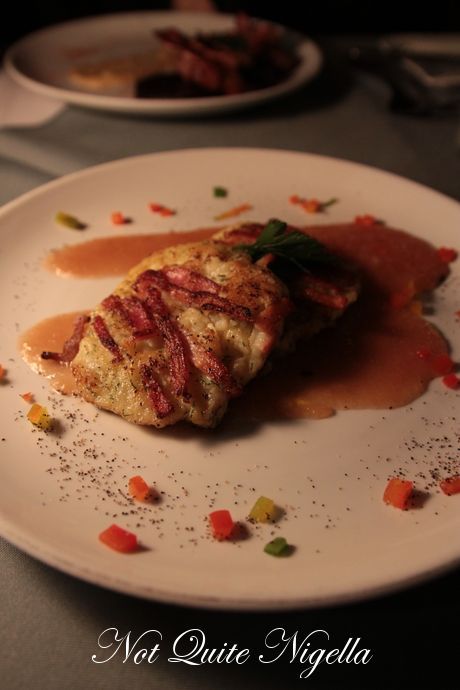 We ordered three entrees to share among us and the third were said to be the traditional Pancakes of Ireland with bacon, potatoes, and "secret ingredients." Pancake shaped they were like a potato cake mixed with flour and topped with bacon and quickly fell apart on their way to our mouths. They came on a bed of apple sauce.

"Now how many of you are going to see the psychic?" our waitress asks and Queen Viv and I put up our hands to go upstairs. Miss America and Mr NQN stay downstairs-they're not quite skeptics but not quite willing to give up their warm spot. 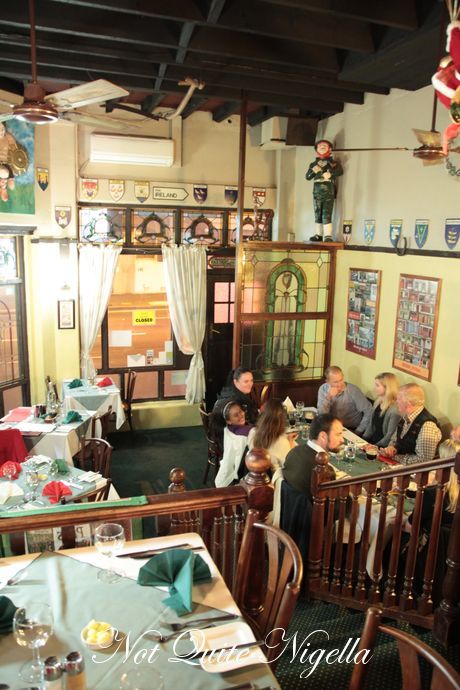 We go upstairs and there are two psychics free. Queen Viv goes towards one and I go towards the other. I'm asked to shuffle some tarot cards and he makes quadrants with three cards and one lot of three in the centre and takes down my birthdate. He tells me about myself and they're all quite true statements-a skeptic would say that they're general statements but I think I'm quite a specific type of personality so I did think that he really honed in on my personality well although of the flipside I am a very typical Taurean. It's about a 15 minute reading where I get to ask questions at the end and unlike when I got my Chinese horoscope done recently, it is very positive with lots of good things to look forward to apparently! I then hand over the $20 which is a great price for a psychic reading. Queen Viv really likes her reading too and feels that she has gotten some clarity on issues that were niggling her. 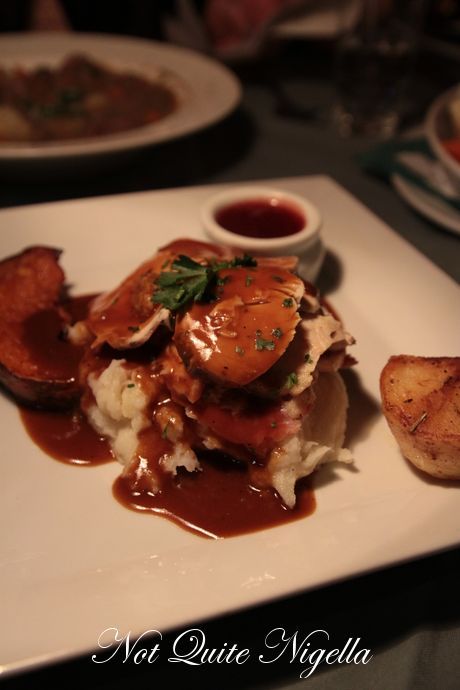 Not long after Queen Viv and I came down the main meals arrived. The Christmas roast was just what I needed-it was slices of roast ham and roast turkey with a layer of stuffing, gravy, roast pumpkin, half a roast potato, mash and a pot of cranberry sauce on the side. The roast is moist and the accompaniments are delicious and give us all a warm flush in our cheeks. 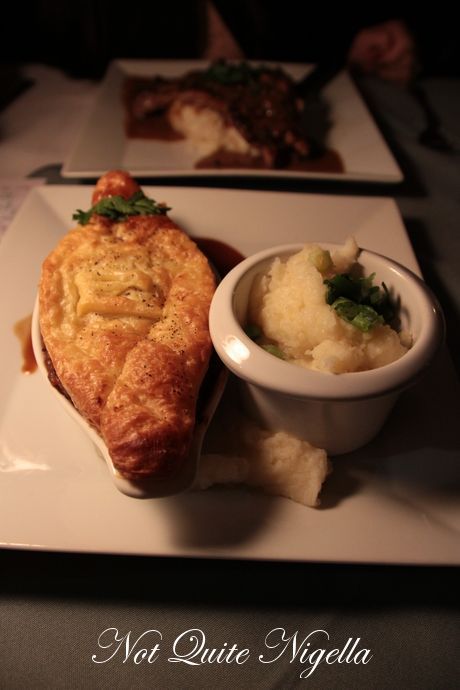 Miss America is as much a pastry enthusiast as I am and I knew we'd both like this. It's a beef & Guinness pie topped with buttery puff pastry and has chunks of flavoursome carrot, potato and beef underneath and a rich Guinness sauce. The chunky meat is strongly flavoured and bold and meltingly soft. 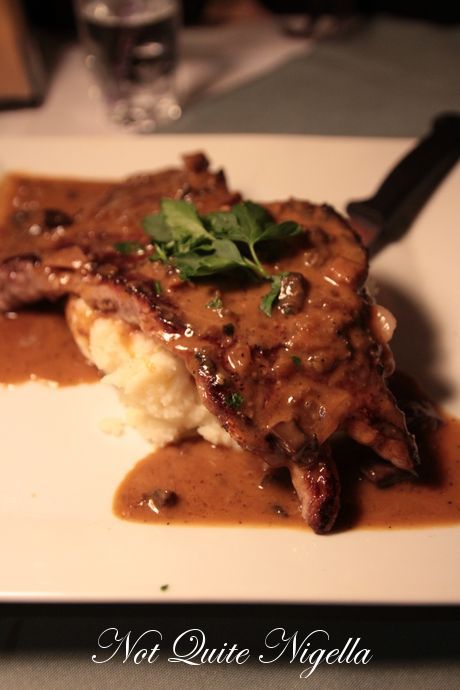 The black velvet steak is a grain fed sirloin steak with a Guiness and champagne sauce and it is enormous blanketing the mountain of mash underneath it. The sauce has a slight bitterness from the Guinness and champagne and there are also small pieces of mushroom in the sauce. The steak is tender and filling and we leave it up to Mr NQN who manages to finish the enormous steak. 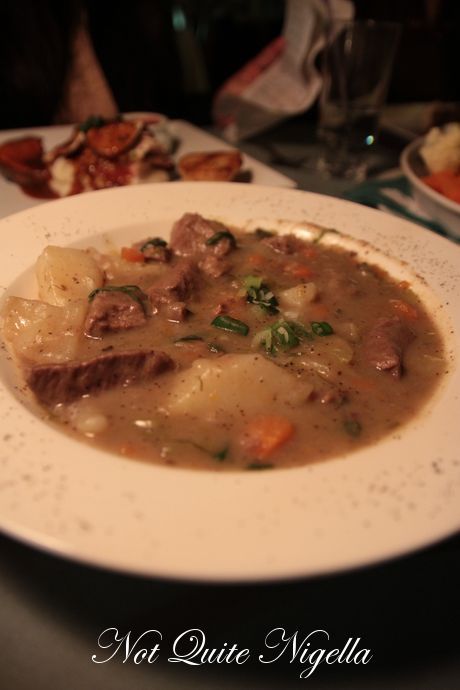 We ordered this purely because it is such a classic Irish dish and it is a rib sticking Wintery dish with fork tender lamb pieces, carrots, potato and onion in a thick stock based sauce. It is an entire meal in itself and I only wish that there was some bread to soak up the thick stew. 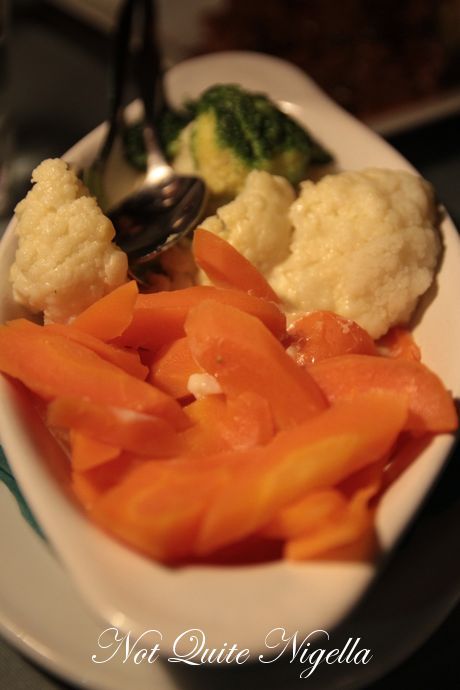 Side of creamy vegetables 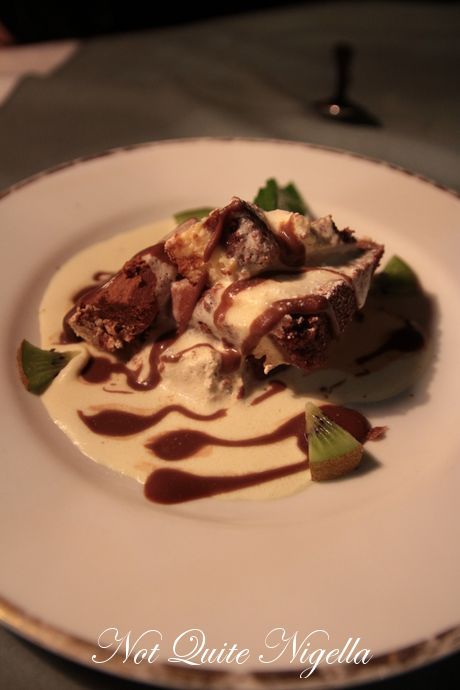 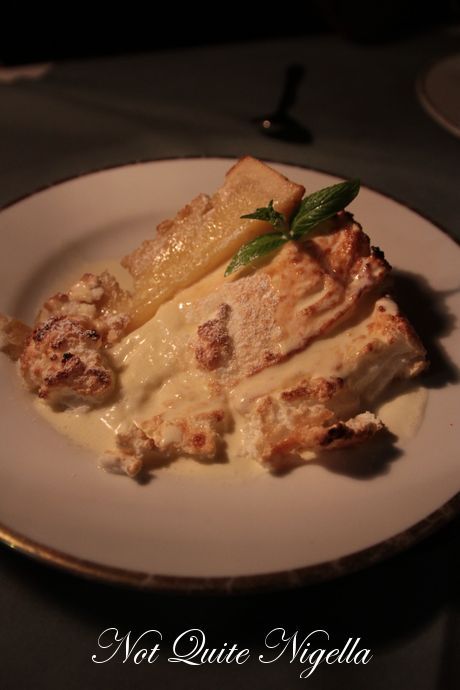 The lemon meringue pie is unusually served hot but it works in this weather even if it does slightly fall apart on the way to the mouth via the fork. The top of the meringue is crunchy and these are the prized bits along with the very sweet lemon filling (I do like my lemon filling tangier but it pleases Mr NQN when its sweet). The pastry is excellent and not too thick instead just melding into the sweet lemon filling nicely. 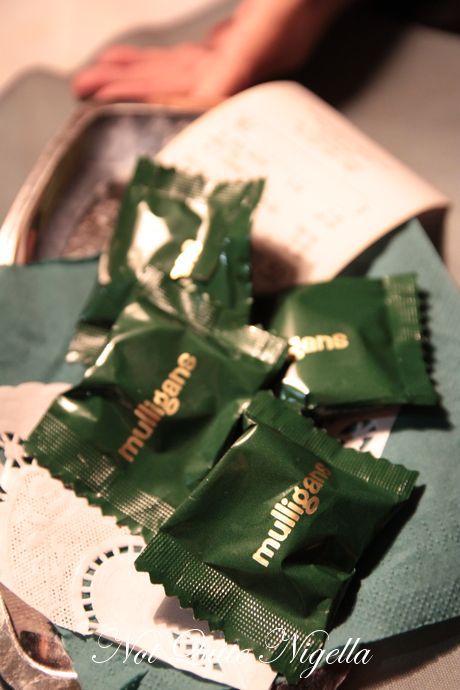 "It was just what I needed" Queen Viv said and staring at the the fireplace with contented stomachs we couldn't agree more.

So tell me Dear Reader, do you read your horoscope and have you ever had a psychic or Chinese horoscope reading? What did you think of it? 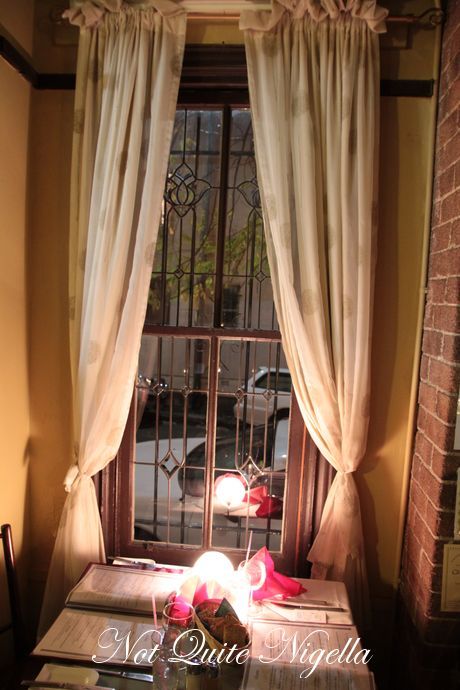 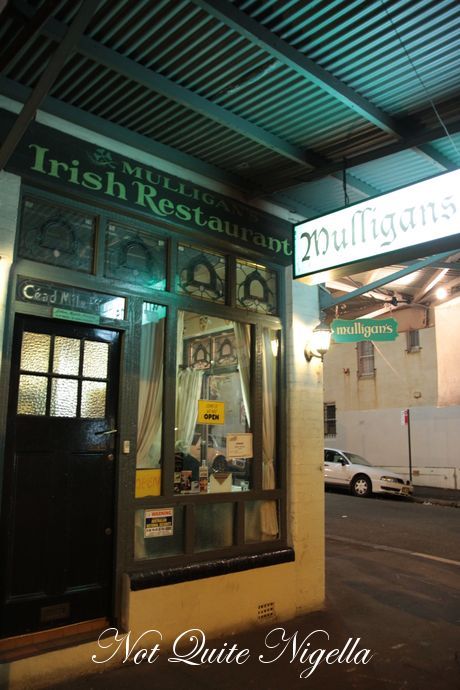