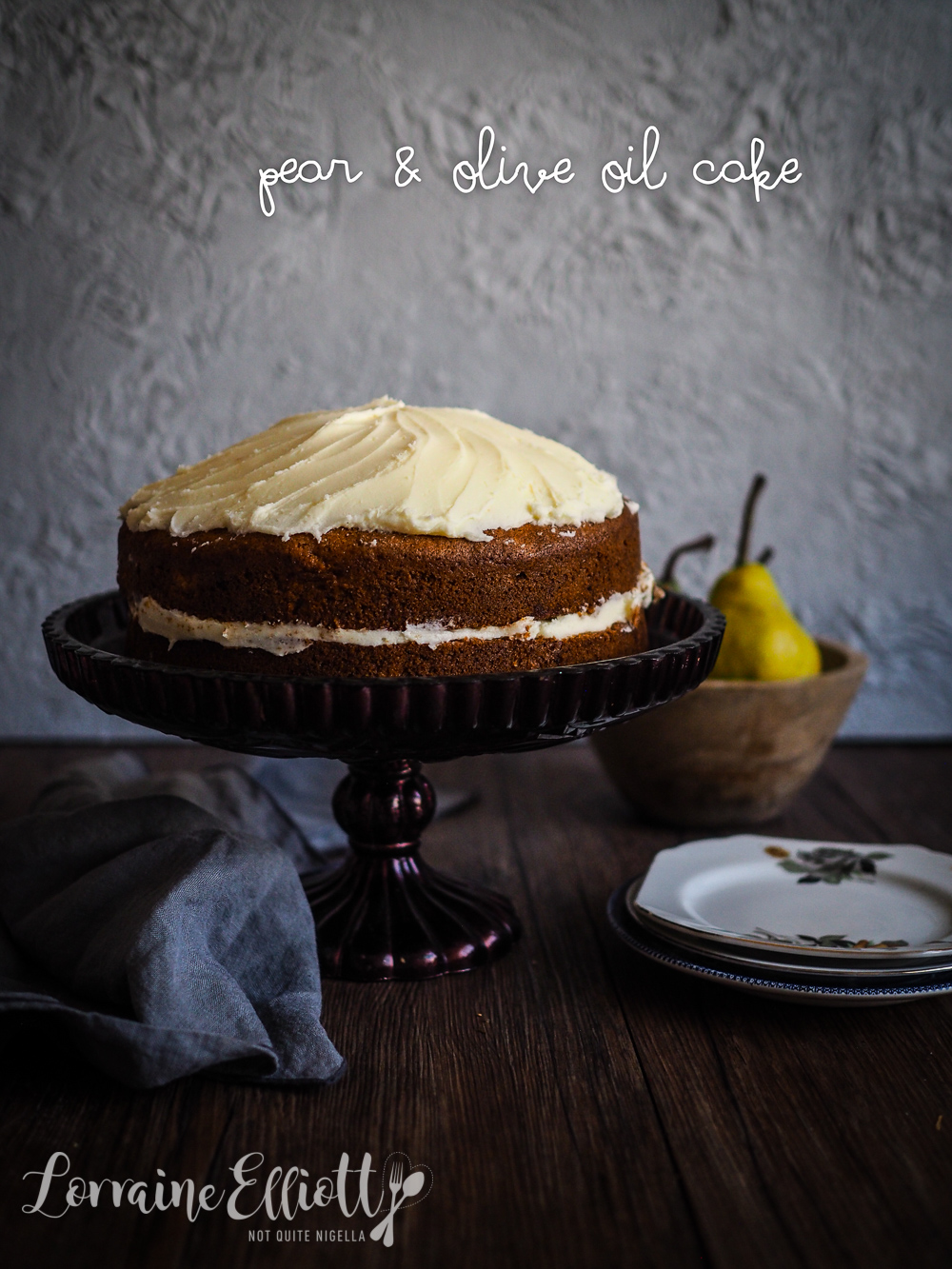 Want a wholesome cake full of the goodness of seasonal pears, spicy ginger and sultanas? This pear and olive oil cake has lots of chunks of fruit and ginger as well as a fluffy lemon cream cheese icing on top! I called her Dorothy. 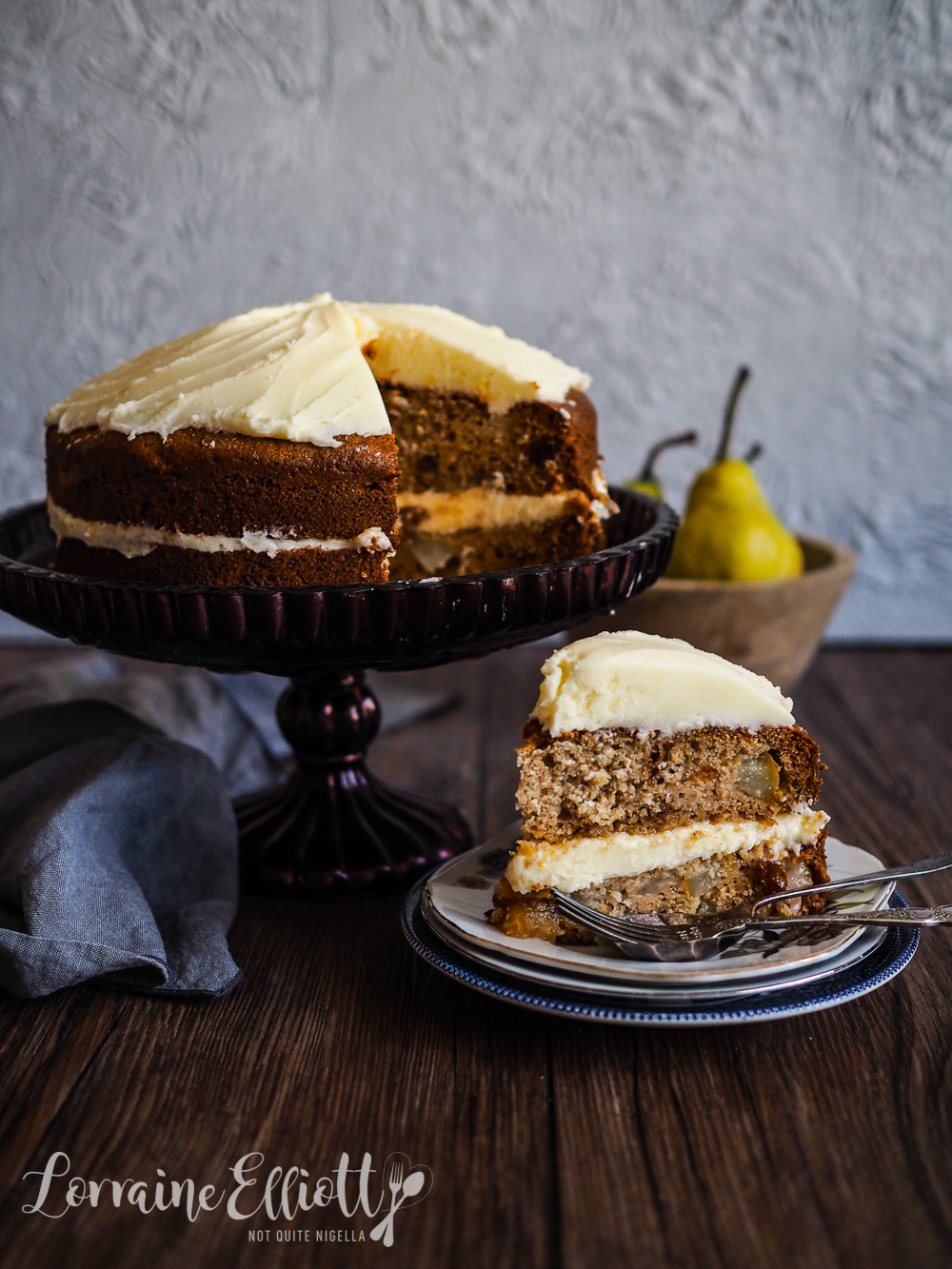 I was assigned dessert so I went looking online to find one. I chose this because I had so many pears on hand as well as, randomly, two egg whites that I wanted to use. The cake originally is made with apples which I changed to pears and I also added big chunks of candied ginger to it and swapped out the maple cream cheese for a lemon cream cheese but the base is still there. It was an easy to follow recipe although I did find that the cooking time was quite off. It said bake for 1 hour 30 minutes and by 1 hour 15 minutes mine was done, perhaps over done. 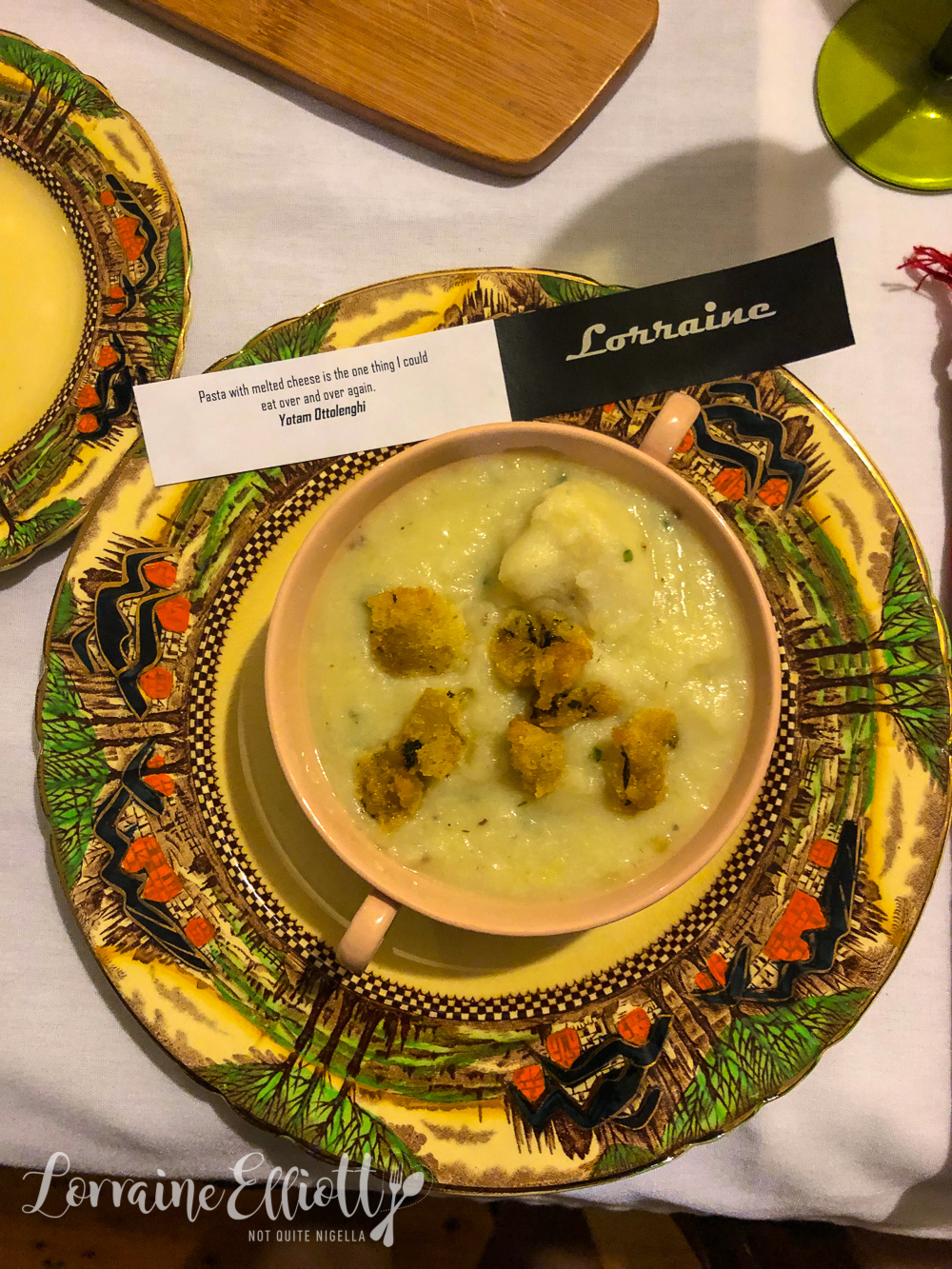 Fearing a dry cake (and there's not that much oil in it already) I did brush the cut cakes with maple syrup before spreading them thick with cream cheese frosting. We took it to the dinner party and met all of Valentina's friends. Valentina is such a talented and artistic soul and she had set the table perfectly with place cards with individual Ottolenghi quotes. I loved mine which read, "Pasta with melted cheese is the one thing I could eat over and over again." 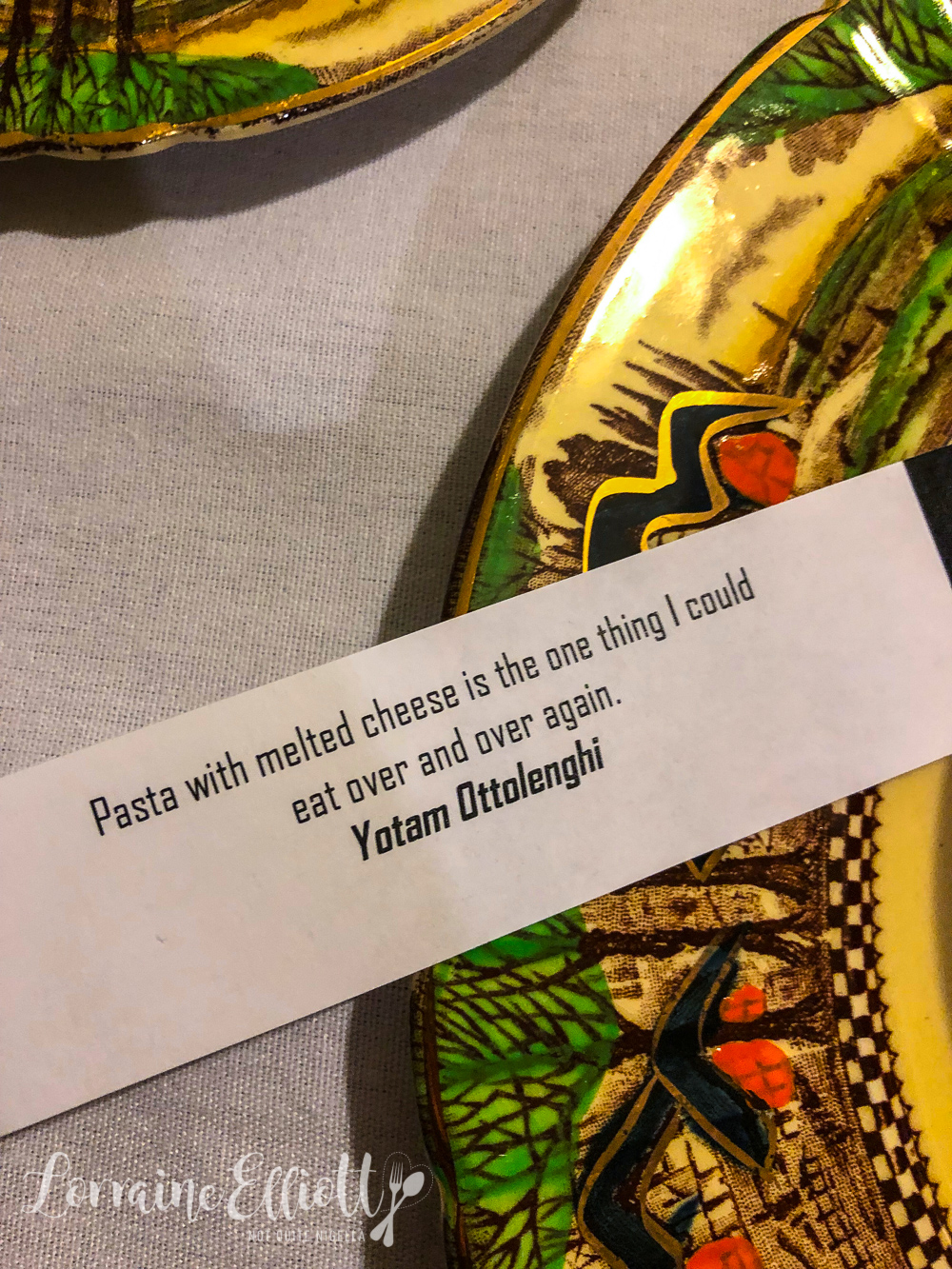 She had also decorated with tinned cacti, gorgeous art deco vintage tableware and between each couple was a gift of a teatowel which was so generous. I was too busy talking and eating to take any proper photos but the food was wonderful. We started with cauliflower soup with mustard croutons and then segued into eggplant, pomegranate and yogurt, open kibbeh pie, roasted chicken with oranges and arak, Brussels sprouts with caramelised garlic and lemon peel and a tomato and mint salad and pide bread. 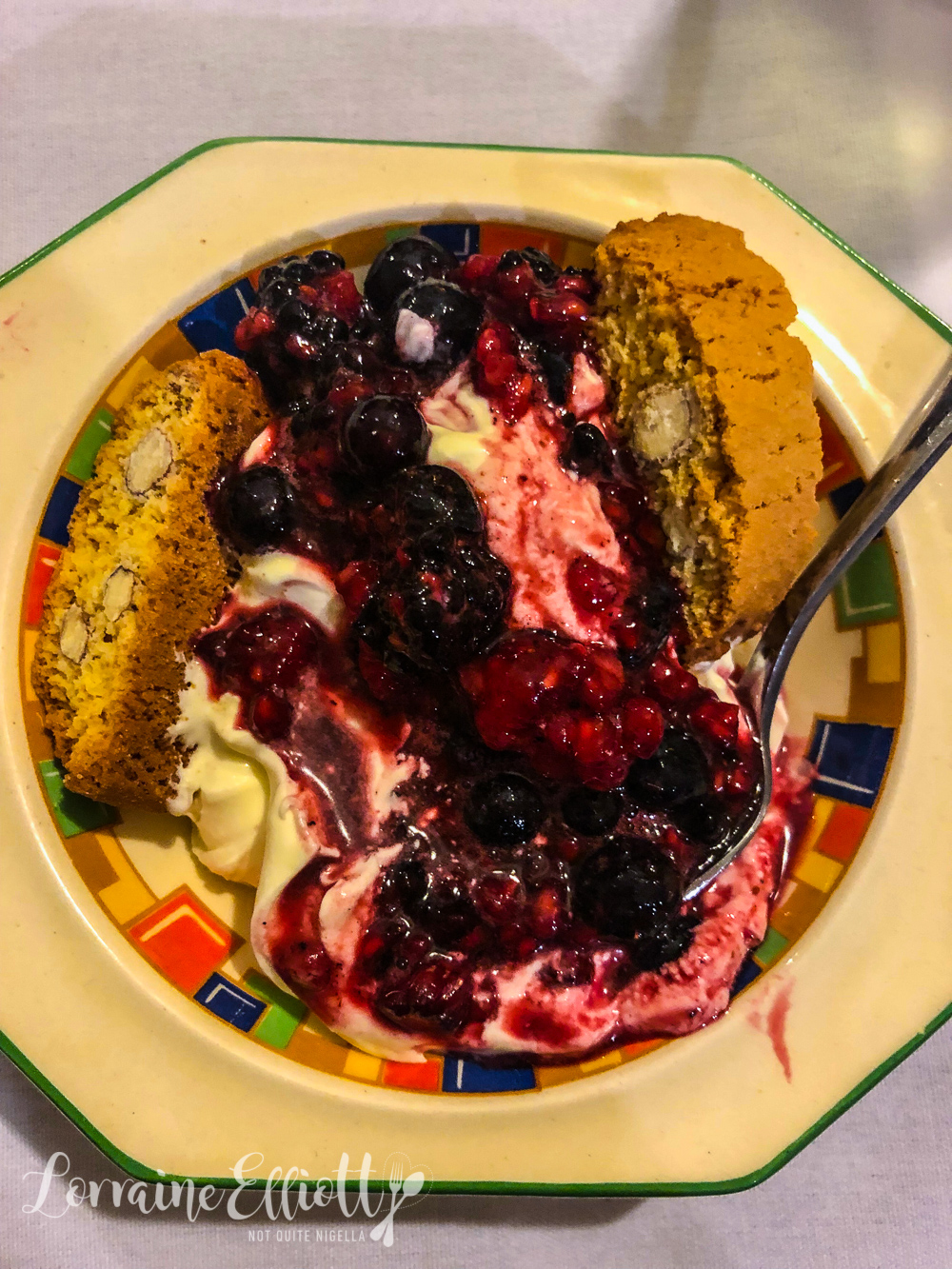 Then it came to dessert and there was a delicious bitter frozen berries with white chocolate cream and my cake. I was a bit worried it might be too dry after over cooking but I think the maple syrup helped. I've changed the recipe to reflect the shorter cooking time and my amendments. At the end Valentina gave a quote from Ottolenghi that after one of his meals, someone should never feel too full and she was right. We were satisfied but not vanquished by the meal! 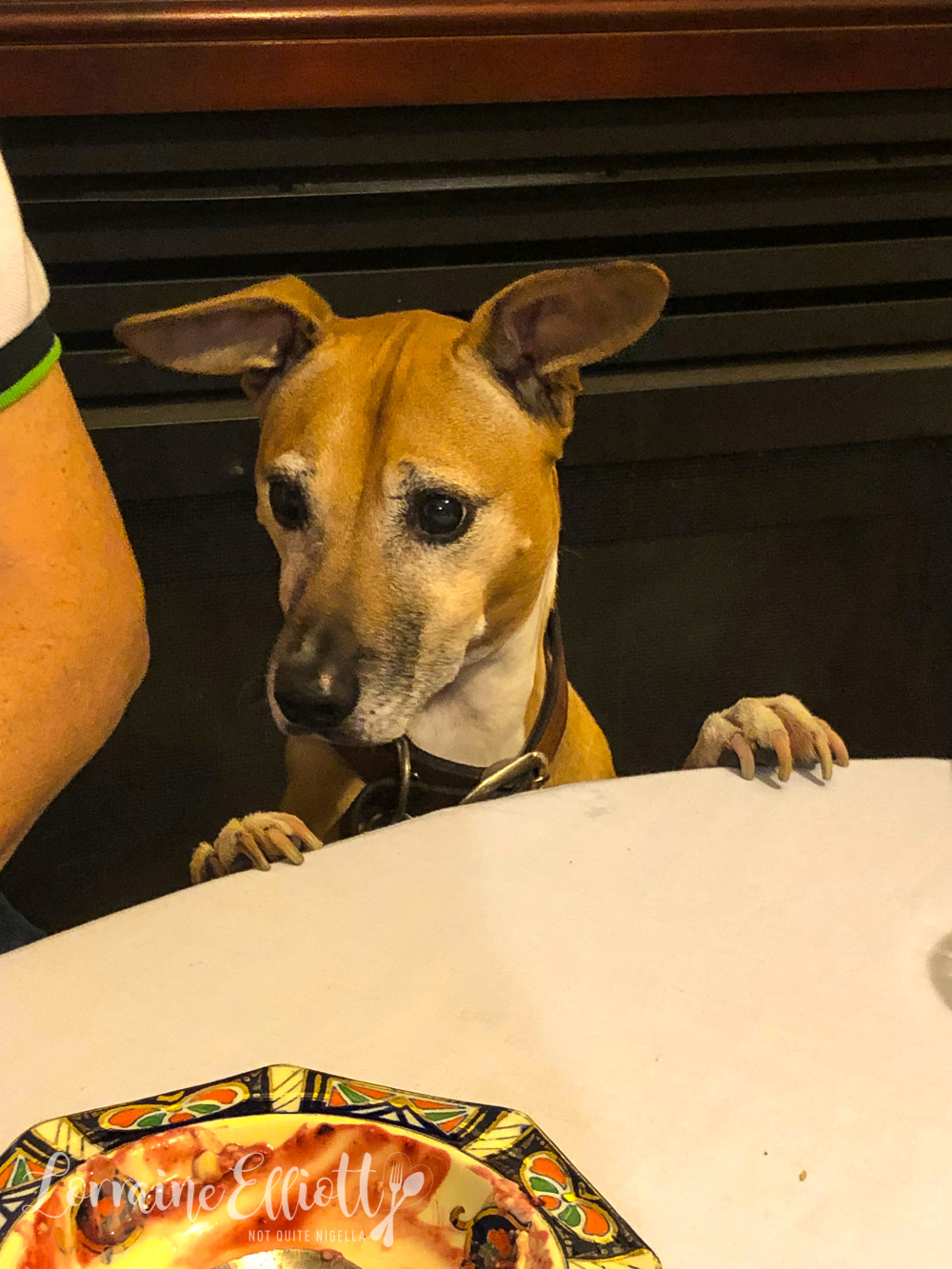 Ever hopeful for a crumb is Cooper!

So tell me Dear Reader, have you ever had a themed dinner party? What theme would you do? Do you ever feel too full after a meal? 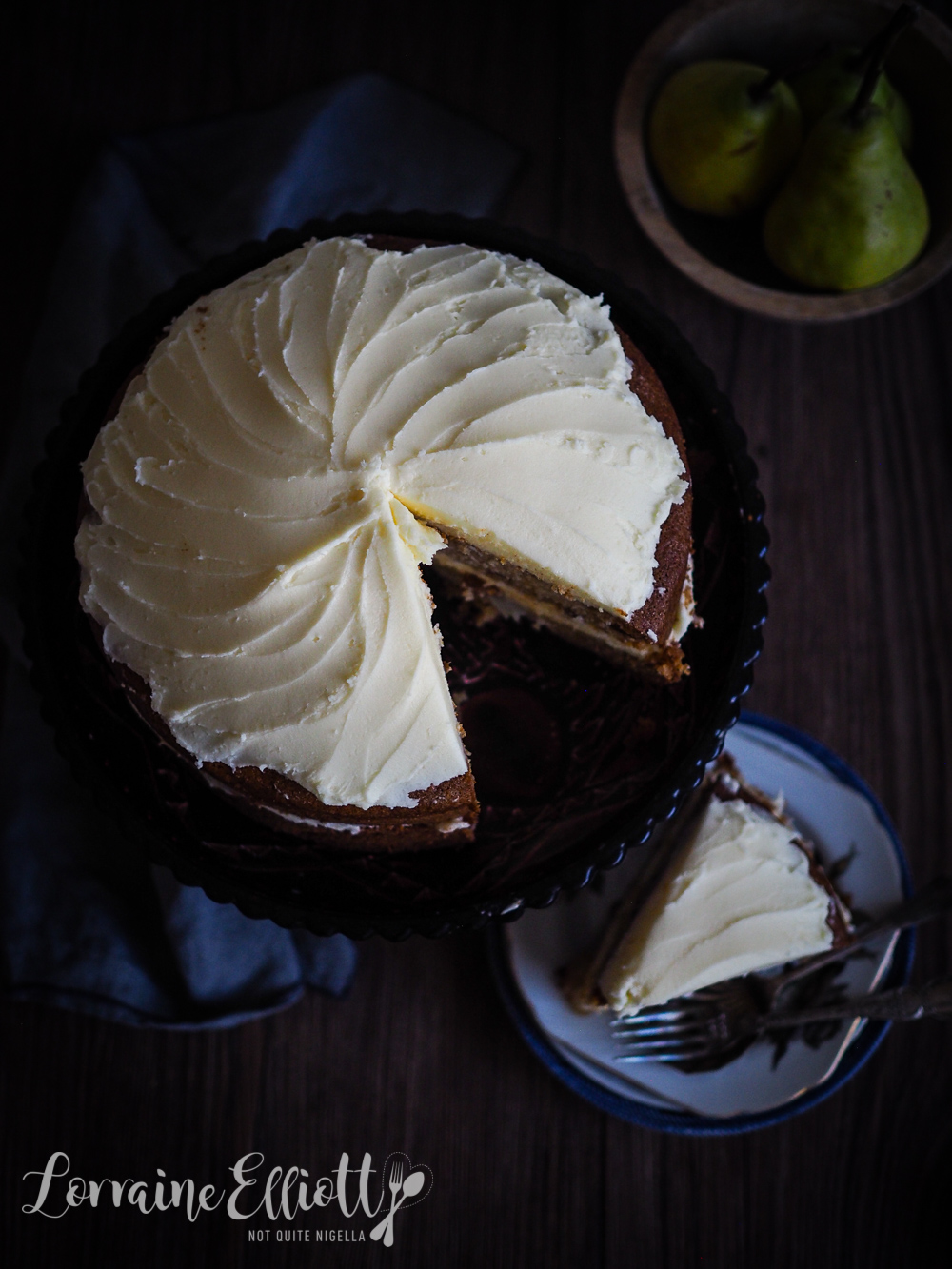 This cake is best made a day ahead of time 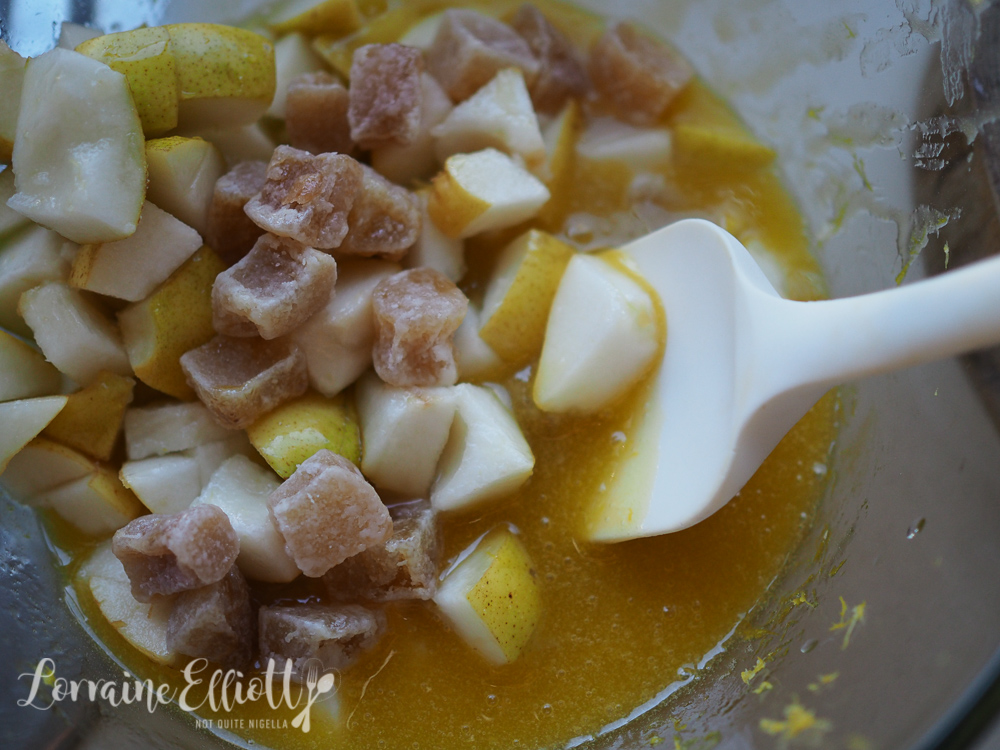 Step 1 - Preheat oven to 170C/338F. Line the base and sides of a 20cm/8inch round springform tin. Soak raisins in the water for 10 minutes and then drain once finished. Meanwhile start the rest of the mixture. Whisk the flour, bicarb, cinnamon, salt and baking powder together in a bowl. In a large bowl whisk the oil, sugar and eggs together until it becomes a thick cohesive mixture. Add diced pears, ginger, drained raisins, lemon zest and lemon juice. Fold in dry ingredients.

Step 2 - Whisk the egg whites until you get soft peaks and then add the additional sugar and whisk until you get a glossy meringue - you don't need to take this until it is very stiff though. Fold the meringue into the main mixture trying to keep as much air in as possible. Scoop into the prepared cake tin and bake for 1 hour and 5 or 10 minutes and the centre springs back when pressed. Cool completely and wrap until next day. 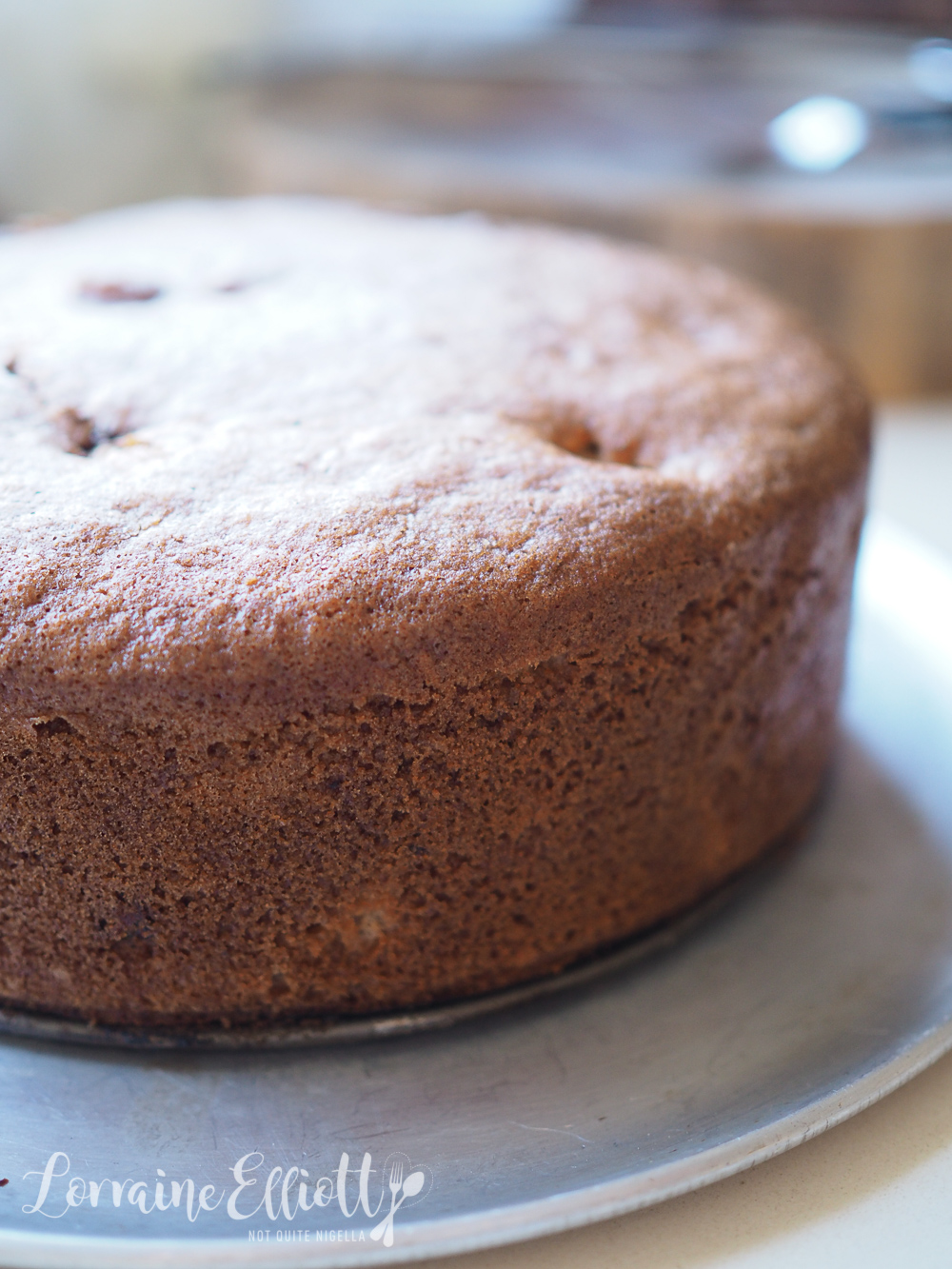 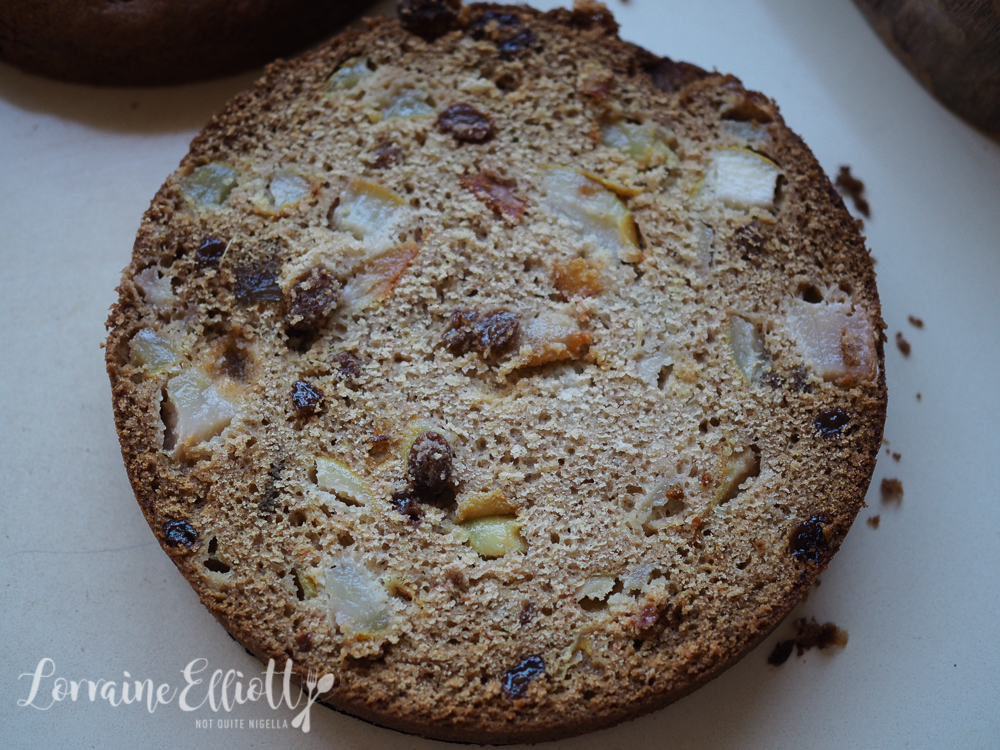 Step 4 - Slice cake in half horizontally and brush each half on cut side with 3 tablespoons of maple syrup. Place one cake on a serving plate and spread with half of the frosting and then add second cake layer and top with cream cheese frosting. I made mine a dome finish but that's honestly because I am a bit of a drama queen. 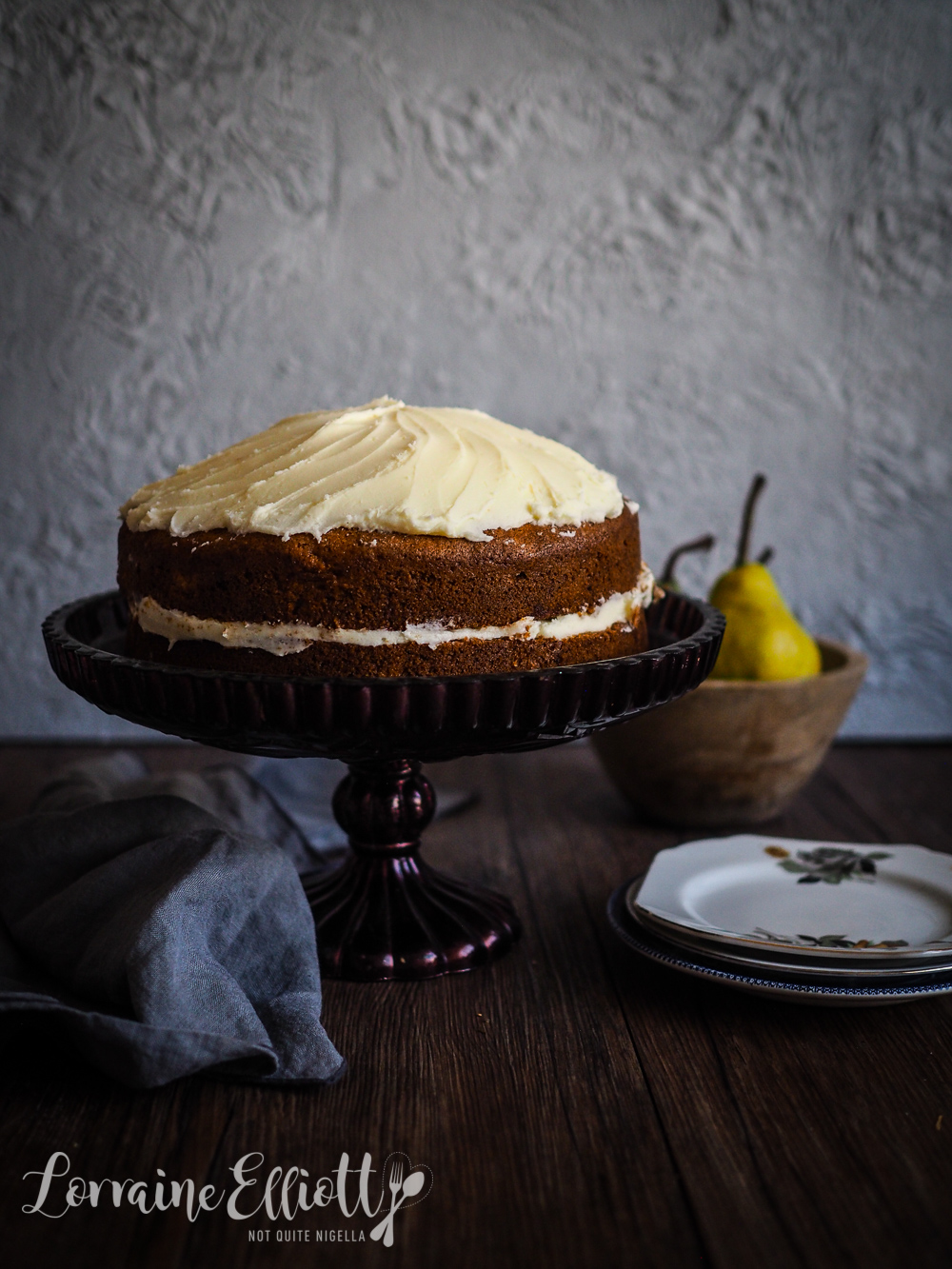