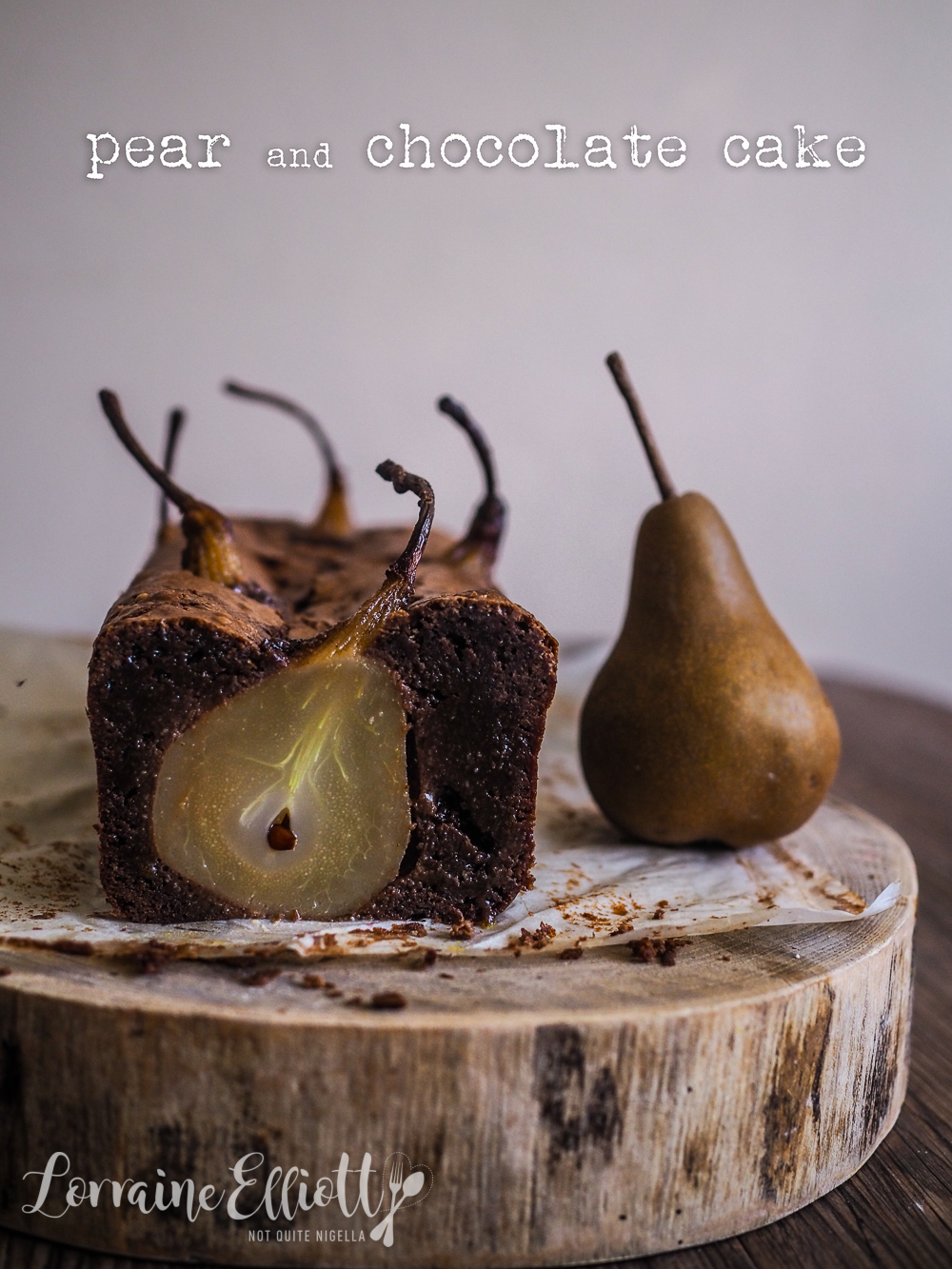 This cake is something special. That's not to suggest that it's hard or elaborate. In fact it is made up of two simple components, one of which can be made days ahead of time. It starts with spiced poached beurre bosc pears. These are submerged in a rich dark one bowl chocolate cake batter that also happens to be gluten free. Cutting into this cake is one of life's low key pleasures! I called her Yamila.

I got the idea for this cake from Zoebakes on Instagram. Her cake was a ginger spiced cake but I was feeling all about chocolate so I decided to do a rich one bowl chocolate cake. It's the sort of mix that is wonderfully gooey and rich, much like a brownie. 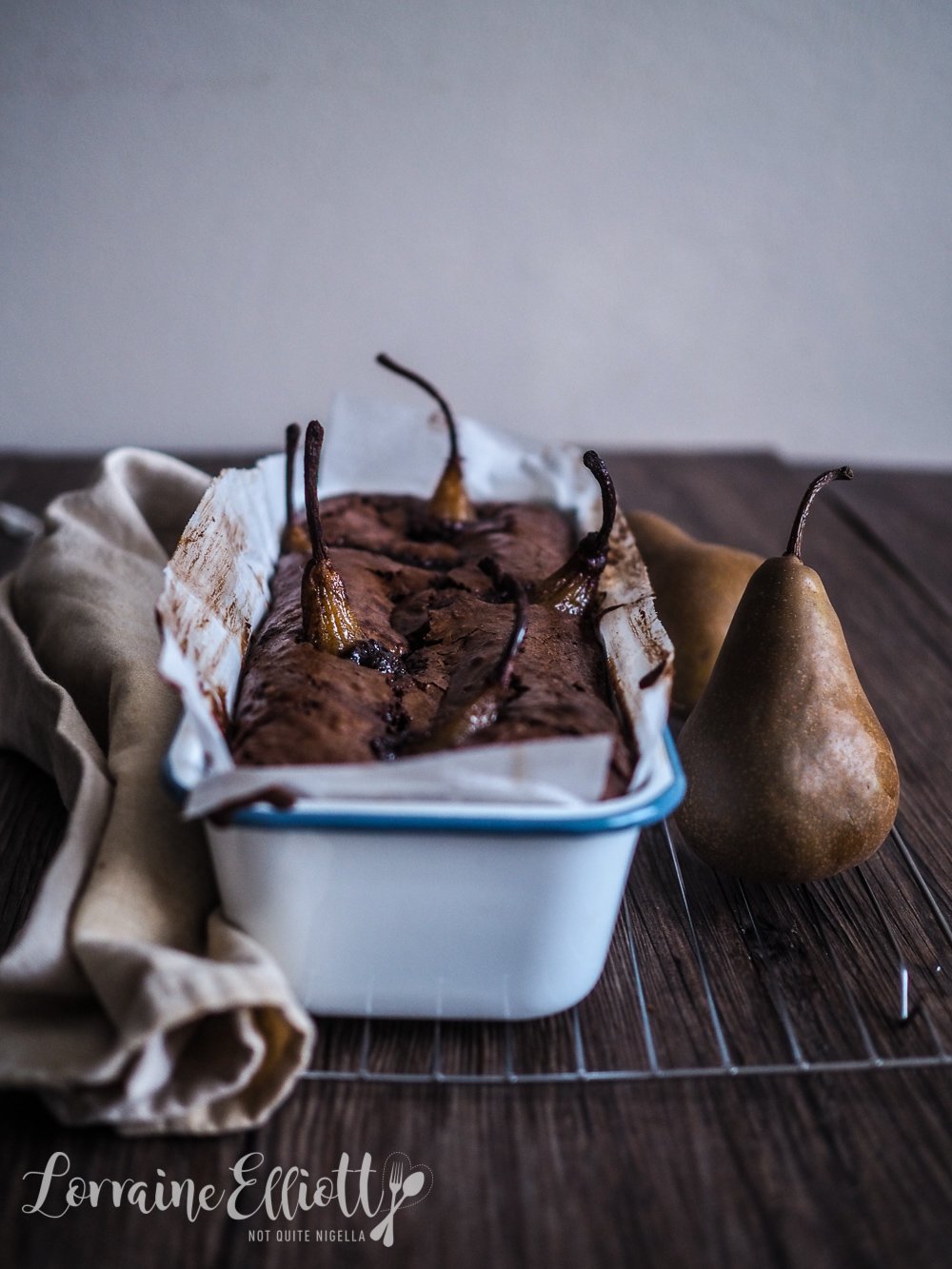 I had baked the cake late one afternoon and it was too late to cool and photograph it. I also wanted to make sure that the cake was completely set because a lot of it relied on it being firmly set inside. "I can't wait to wake up tomorrow and cut the cake," I said to Mr NQN. This cake was as much for him as it was for me as it involved a lot of fruit and he loves that.

That night I also couldn't wait to get to bed as I was eager to watch my newest tv show addictions. I have two show obsessions and both were recommendations from Queen Viv who really knows the sort of show that I enjoy.

The fist show is The Girlfriend Experience. It's a two season anthology tv series based on the movie of the same name. It's about the life of an escort but it's much more than that. The first season is full of drama and storylines beyond the basic escort story. The second season features a completely different cast and has two separate storylines featuring two different sex workers. The Bria storyline starts off very, very slowly but is beautifully shot while the Erica and Anna storyline is a lot about politics (warning: some episodes may make you blush as it is rated R - Mr NQN came in at one point from the other room and was wondering what I was watching!). 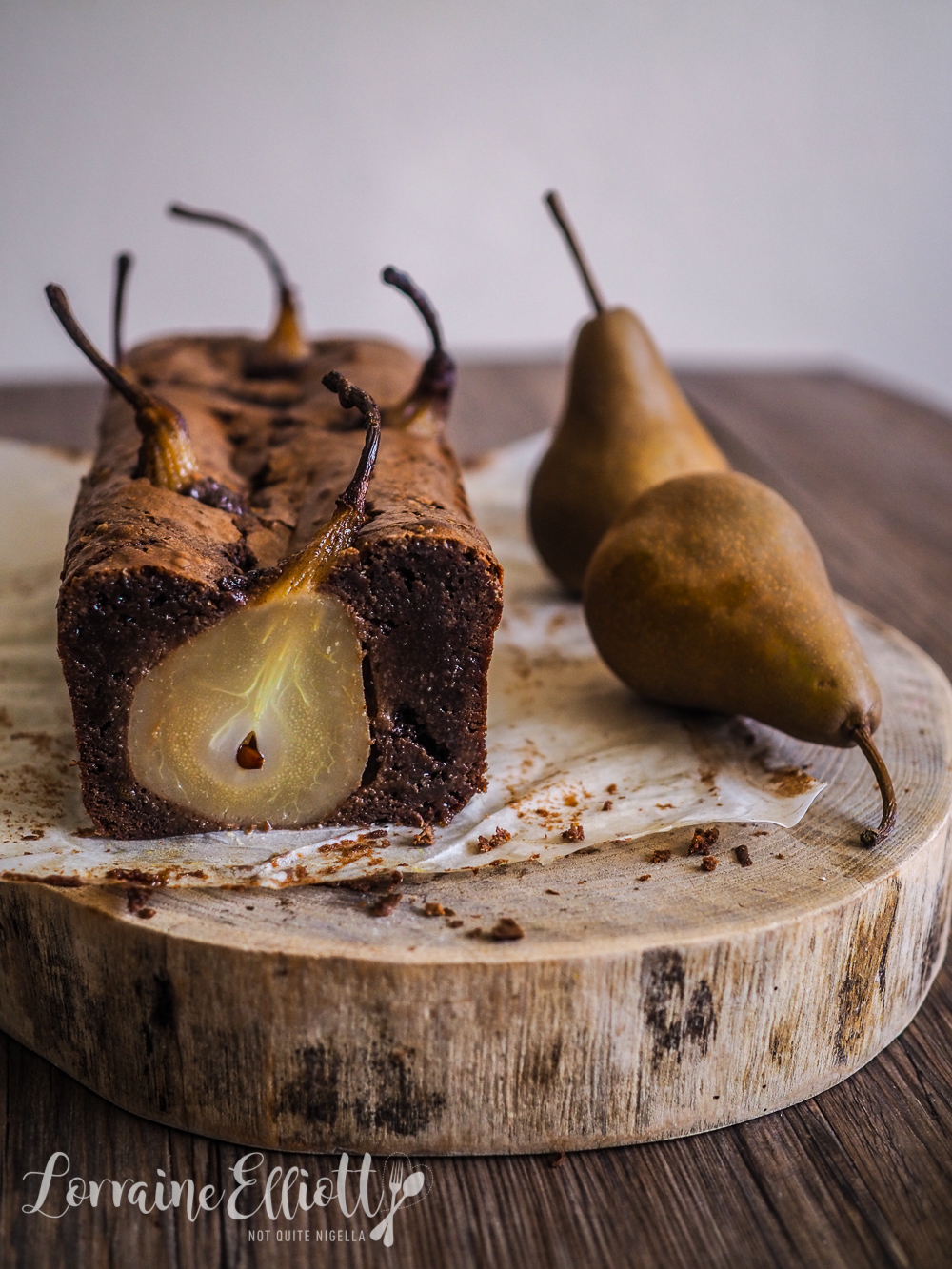 The second show is called Killing Eve and is such a fascinating show. It's about an MI5 agent that gets tangled up with a serial killer and it's smart, funny and suspenseful. Sandra Oh is incredible as the MI5 agent that ends up having this unique sort of relationship with the contract killer that she is pursuing (I don't want to spoil it). It's also on ABC iview so it's free to watch.

I stayed up very late watching the last episodes of Killing Eve and I when I woke up the next day I had a bit of a tv hangover-yes sore from watching tv until 2am. But then I sprang out of bed because it was time to cut and photograph the cake. I said a little mental prayer to the cake gods and then I sliced into it. It was just as I wanted it. The cake was gooey and rich and the pears pure and lightly spiced. This cake is also wonderful when heated up so that the cake becomes gooey again and the chilled edge is taken off the pears. But make no mistake, this cake is good any which way you slice it.

So tell me Dear Reader, which tv shows have you liked lately? Have you watched either of these shows? 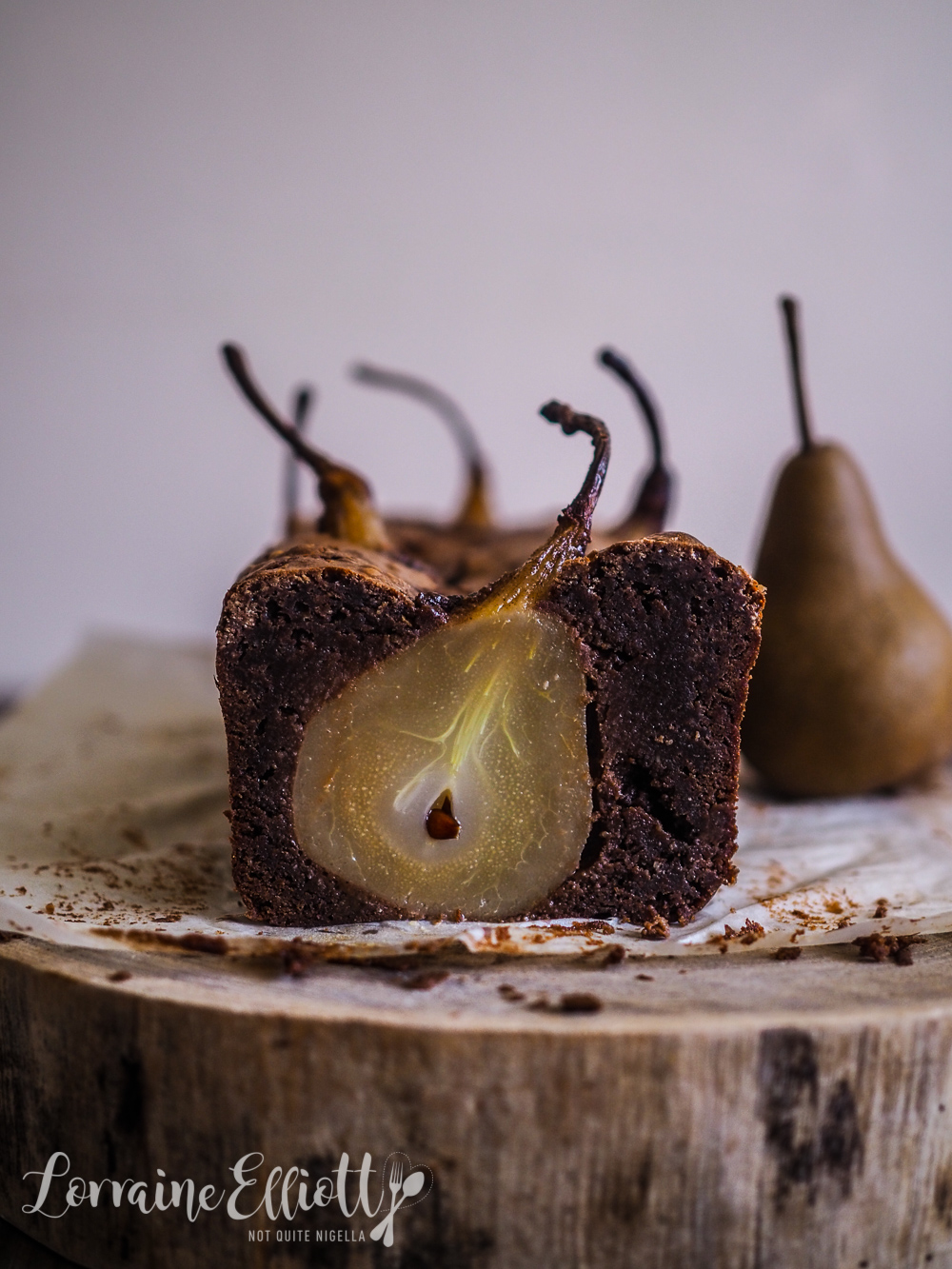 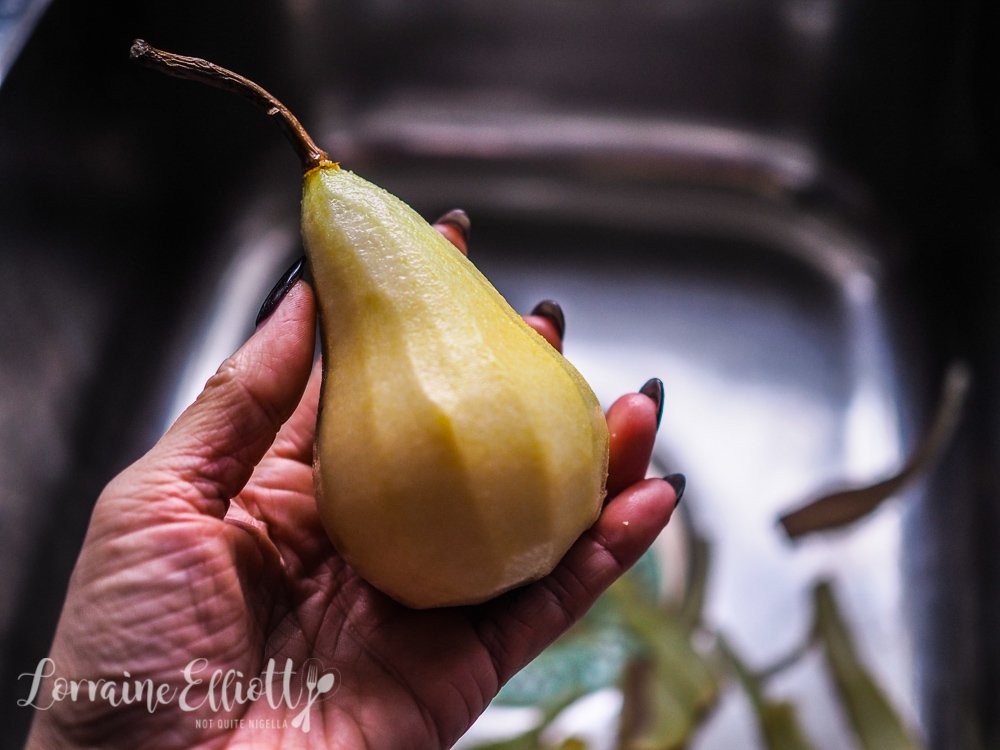 Step 1 - First make the pears-you can make these a day or two ahead of time. Peel the pears and keep them whole. I don't bother with lemon juice, I just submerge them straight into the water once I've peeled them with the sugar, cinnamon, nutmeg, cardamom and vanilla. Bring to a boil and simmer until soft-these pears only took 20 minutes. Stick a fork or knife into the bottom of them to see how they are going. 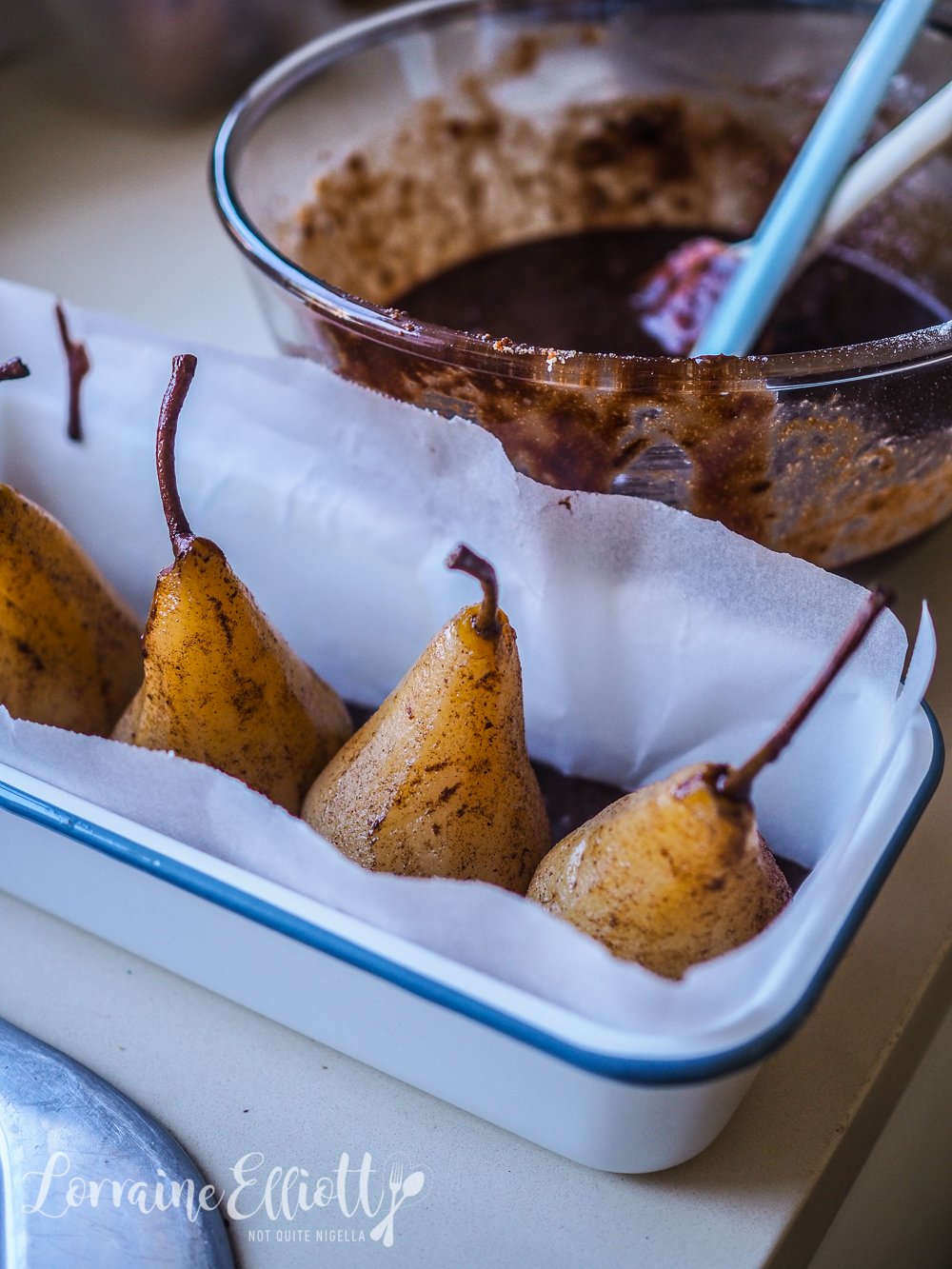 Step 2 - Remove the pears and you can make the simmering liquid into a delicious cordial (bring it to a boil and reduce it by 50% and serve it with soda water). You can use the pears on the same day or you can place them in the fridge. I just bring them to room temperature before starting the cake part. 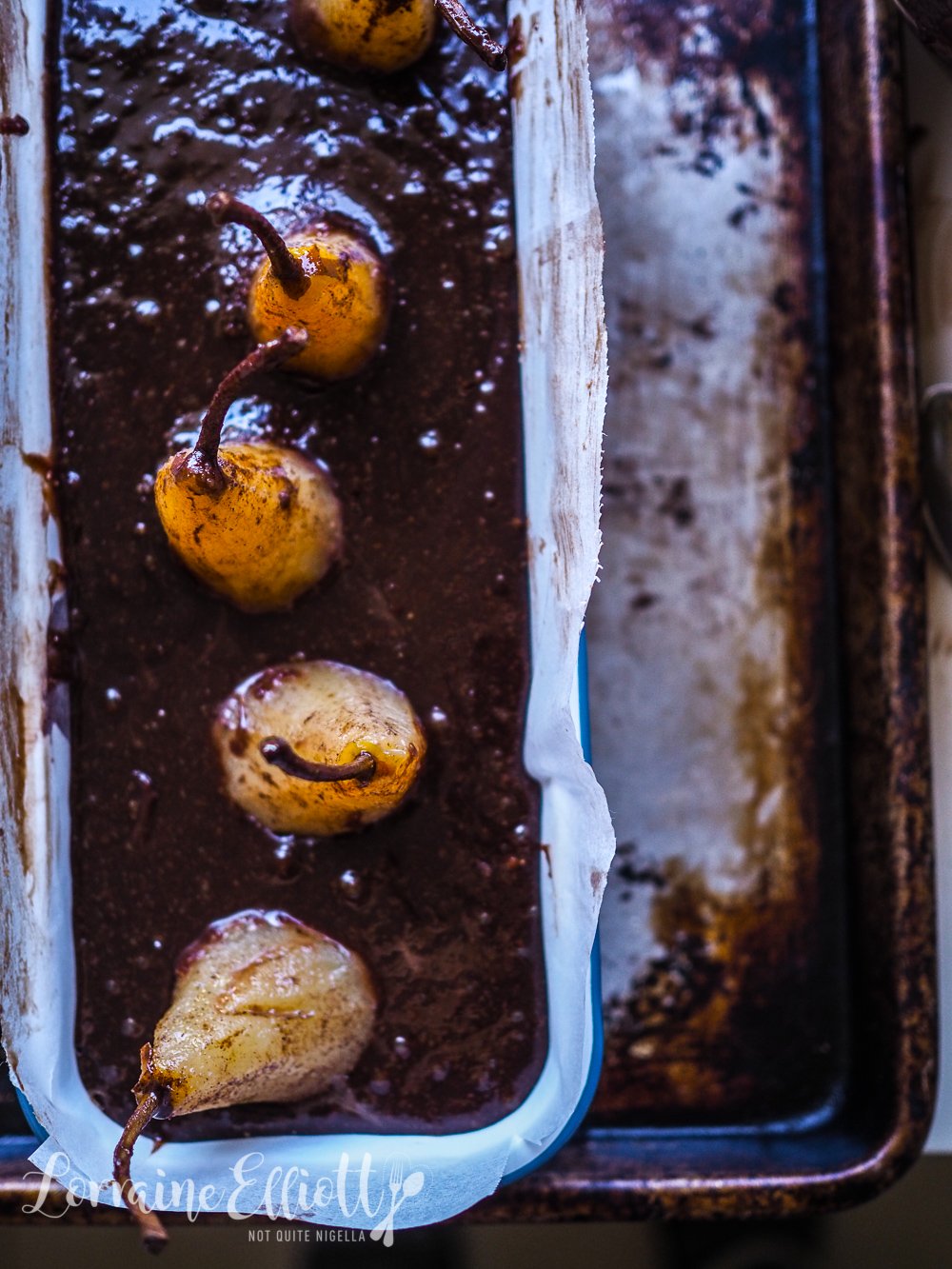 Step 3 - To make the cake, preheat oven to 160C/320F and line a loaf tin with parchment on the base and sides. Melt the chocolate and butter and stir until smooth. Whisk in the eggs and then the sugar, almond meal, milk, vanilla and salt until combined. Pour the batter into the tin and the submerge the pears standing up in the batter. Bake for 1 hour & 20-30 minutes or until the cake is done. Allow to cool completely. Serve with cream. 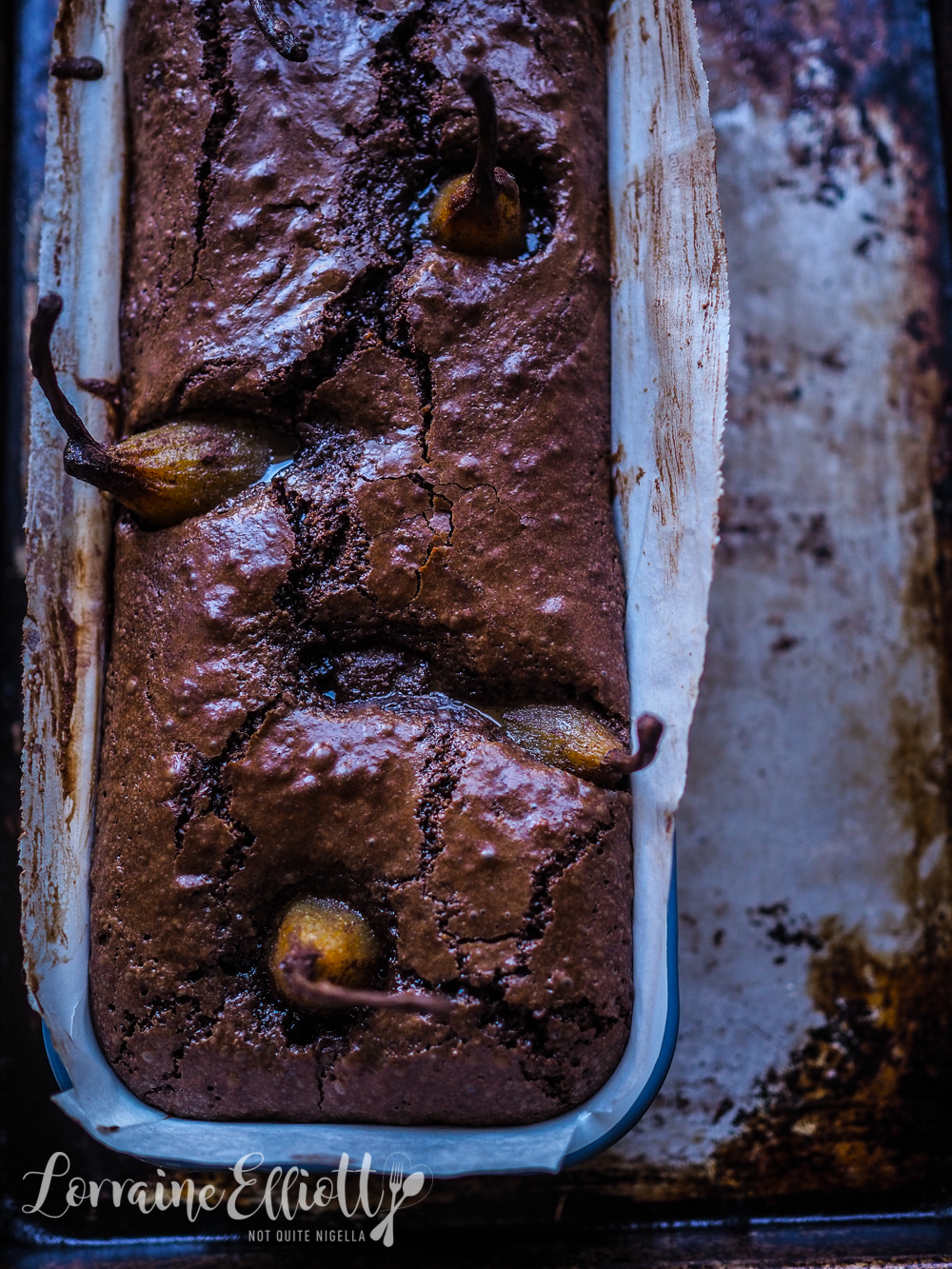 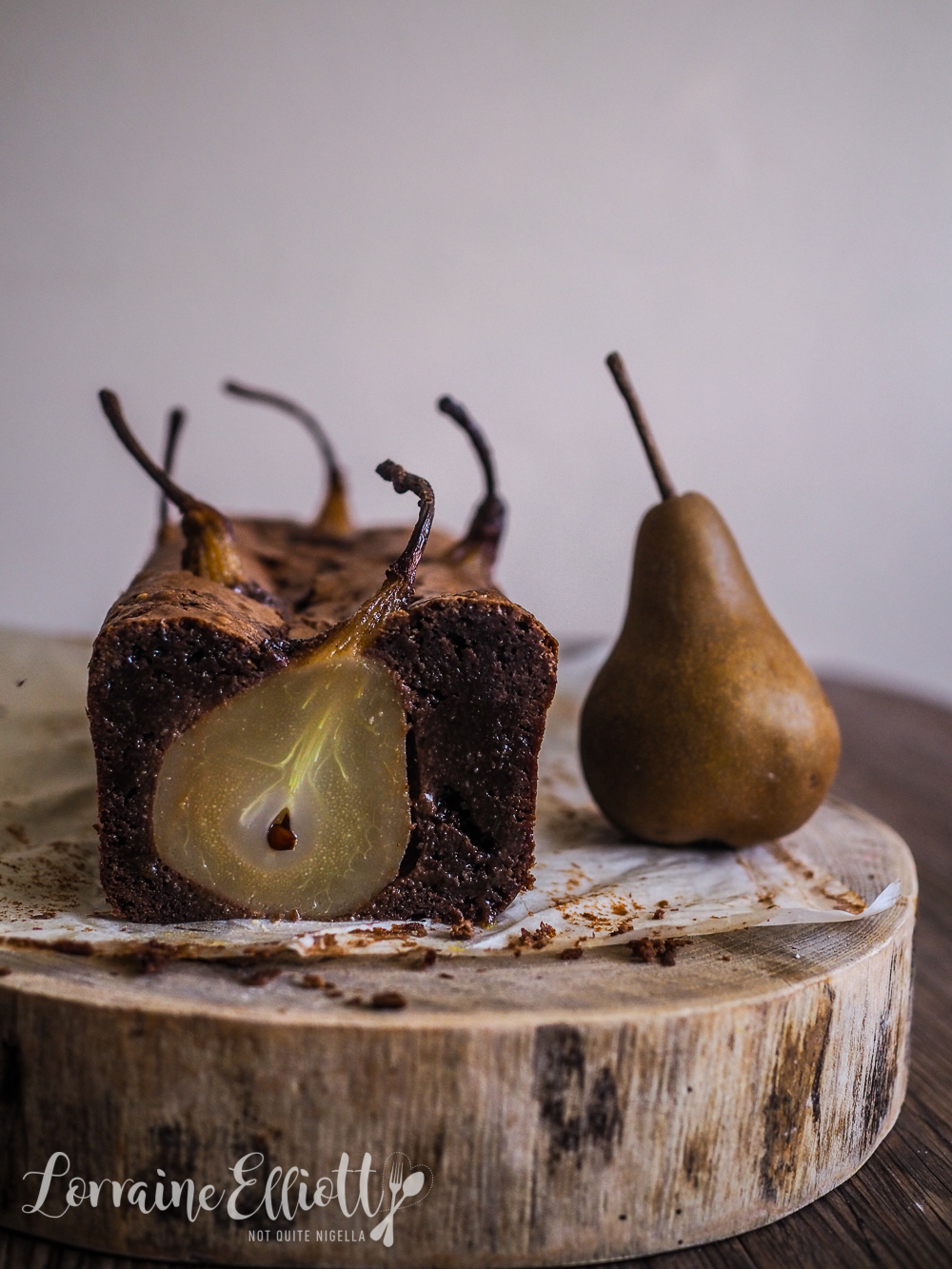