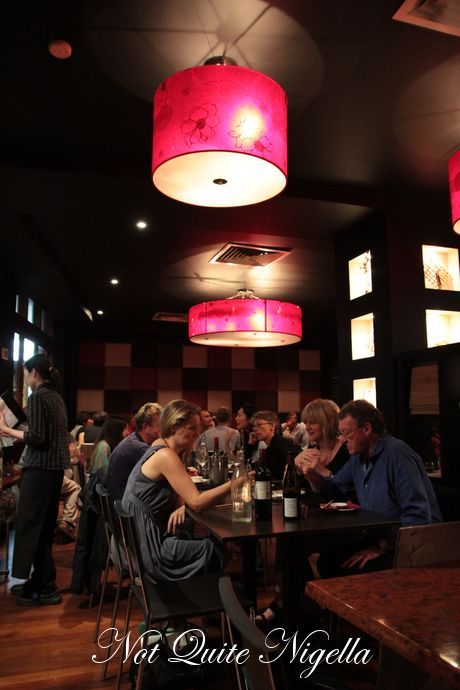 It was Saturday afternoon and I was hunting for a place for Mr NQN and I to have dinner with Queen Viv and Miss America that evening. The latter is very easy going but Queen Viv always needs convincing so I texted Queen Viv "How about Toshiya in Cremorne? They have sashimi tacos."

"That sounds interesting and possibly revolting, let's give it a go" she answered back straight away. A shrinking violet Queen Viv is not ;)

Which is how we found ourselves in her car driving at what seemed like warp speed with Queen Viv at the wheel.  I had already stalked the menu online and from all reports the food was delicious and good value so I wasn't in the slightest bit worried about Queen Viv's foreboding text. 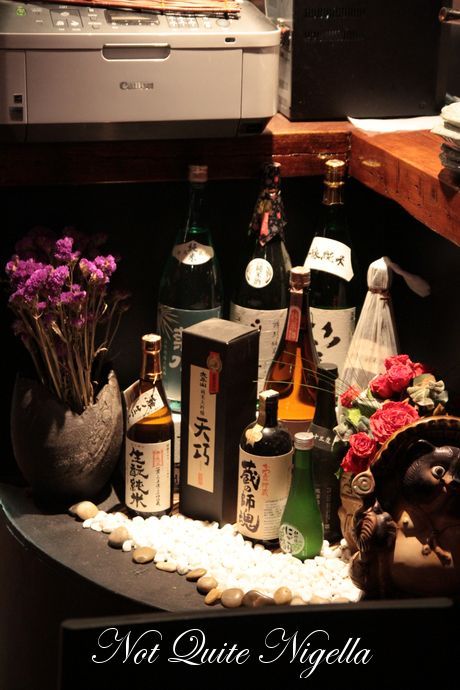 There are all of the usual items on the Japanese menu but what really caught our eye was the page with the sushi specials. With items like the aforementioned sashimi tacos as well as 3 way salmon, tempura sushi and scallops, hi -ha rolls and pari pari chicken. "Let's try the weird stuff" Queen Viv said and Miss America agreed and they reminded me of why I enjoy dining with them so much. The only criticism that I had read of Toshiya was that dishes seem to come out with gaps between them but that to me isn't a problem as we share everything. There are also add ons like Hon Wasabi (freshly grated real wasabi) and their home made soy sauce. 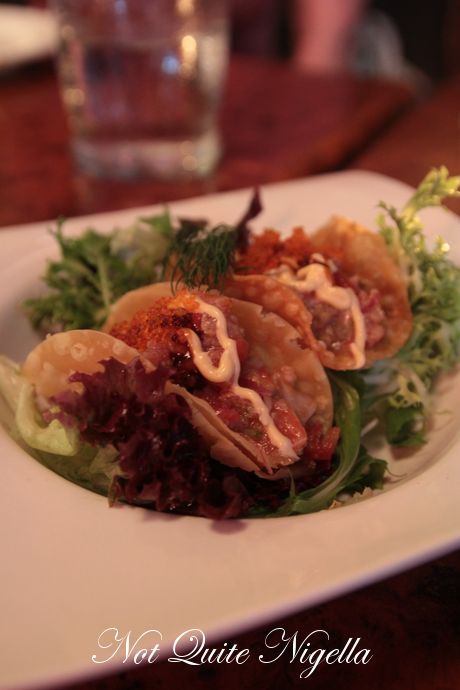 The salmon sashimi tacos came in a deep fried gyoza wrapper curved around like a taco and filled with diced, marinated salmon sashimi. I find that there's a bit too much dressing in there and it makes the taco shell a bit wet if you waited much longer and I actually prefer the sashimi outside of the shell but Queen Viv and Miss America love it and Queen Viv rescinds and literally eats her earlier words. 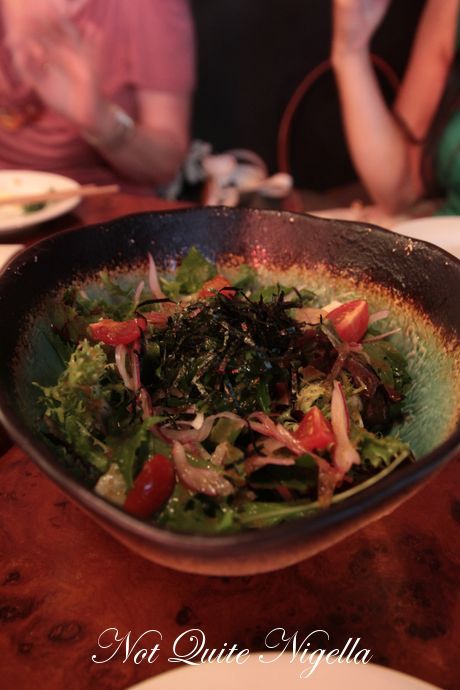 The wakame salad comes out in a  beautiful bowl and features seasoned wakame salad, salad leaves, tomato and red onion with a home made sesame dressing. There is also some dried, shredded laver seaweed on top which provides a nice contrast. 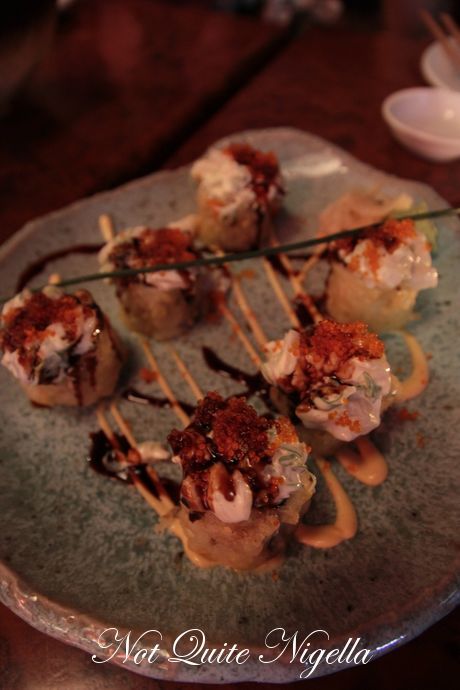 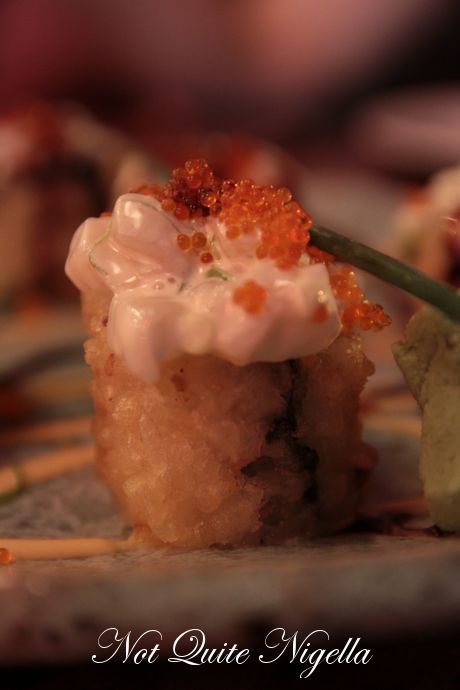 The title of this sushi with the "?!" confused us and also managed to draw our eyes to it. As mentioned we primarily ordered from the special sushi menu as the selection sounded the most interesting. This tempura fried sushi was delicious. It featured a lightly battered avocado inside-out roll topped with a scallop and shallot tartare sauce with flying fish roe and shiso-soy. The avocado in the centre was so creamy and the scallop tartare sauce and flying fish roe were delicious especially with the sweet shiso soy. Miss America declared, "Keep 'em coming!" 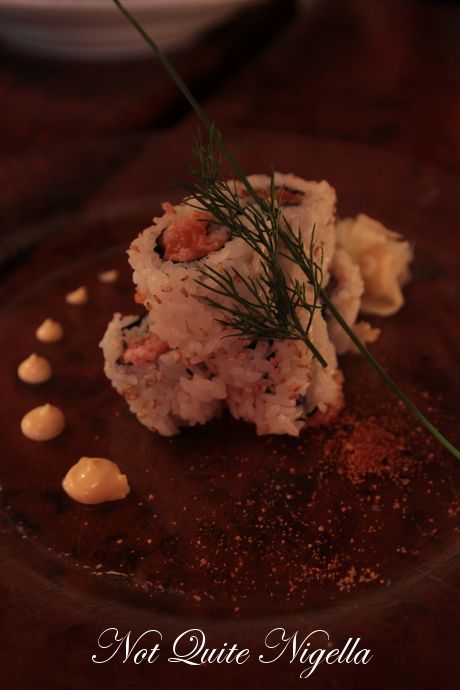 Another item from the special sushi menu this inside out roll has a lovely spiciness to the sashimi. Queen Viv doesn't like chilli but she found this tolerable in terms of spiciness. It's another favourite at the table and so far we're batting at four for four and the next item hasn't even come out. 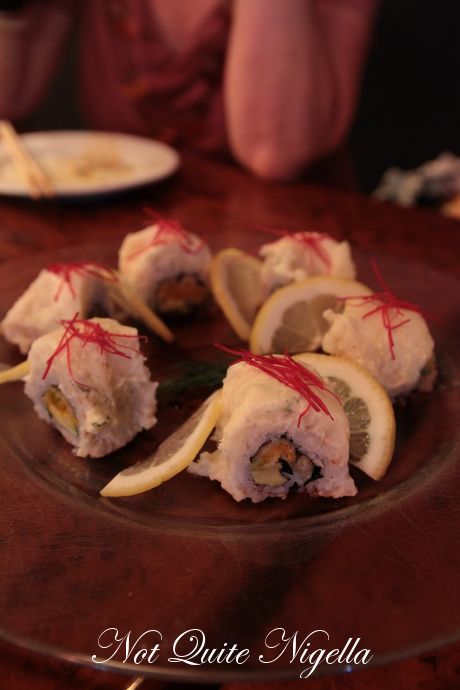 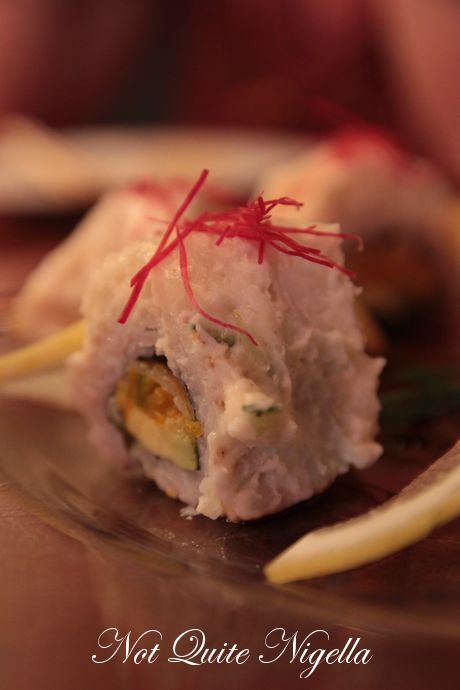 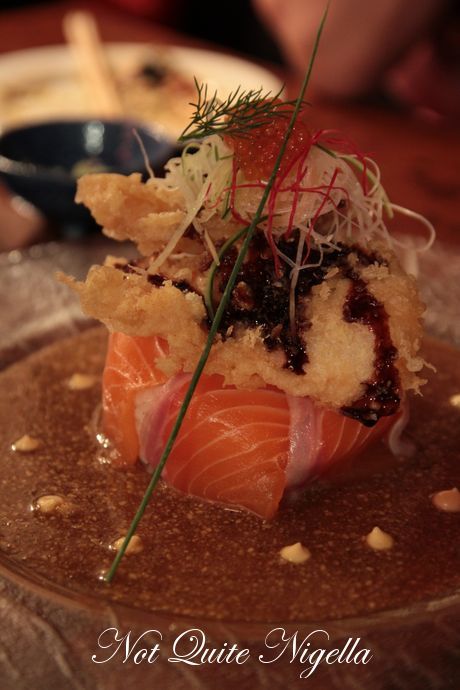 When they set this down I had actually forgotten that we had ordered it. It was salmon three way which I think we ordered for the name-take that how you will! ;) It was a large round of sushi-rice topped with trout sashimi, trout tempura and trout roe with sesame sauce, chilli mayo and shiso-soy sauce. This was the only dish that we felt had too much of something and that was in the sesame sauce which was very, very sweet and at the sweetness level of one of those sesame candies. 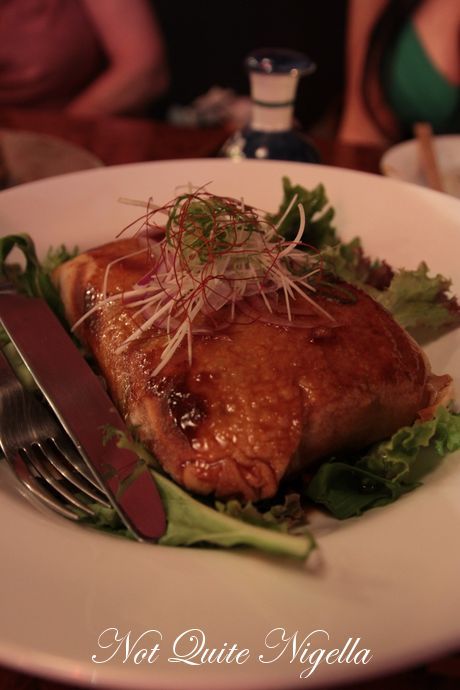 We had no idea what to expect, I almost thought that these would be spring rolls or something. But when it comes out our eyes widen as it is unexpectedly enormous. It's a boneless fillet of teriyaki chicken, sauteed vegetables, melted cheese and tartare sauce wrapped in a crunchy spring-roll pastry. I did taste the cheese but not as much tartare sauce. It is rich with tender, sweet chicken and crispy pastry and because it is so rich, we definitely recommend sharing this with someone because you don't want to miss out on it (and can you believe those prices? Fab!). 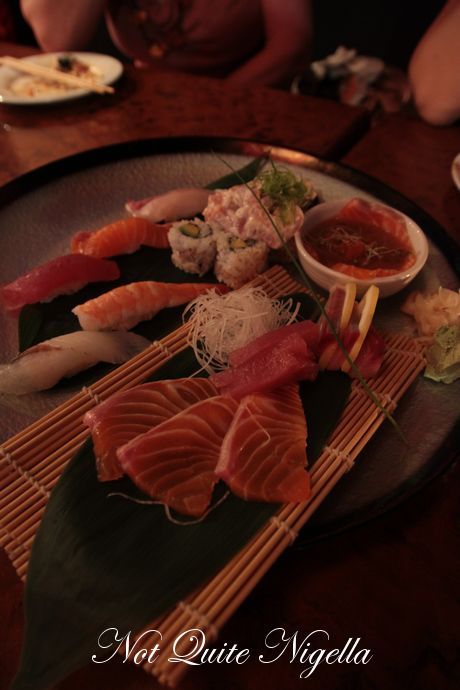 Ahh a respite from the richness, the sushi and sashimi combination has nine pieces of tuna, salmon and kingfish sashimi. There are also five pieces of nirgiri sushi in tuna, trout, kingfish, prawn and egg sushi with just the right amount of rice. Lastly there are six pieces of avocado mini rolls and a creamy, spring onion topped mini carpaccio on top. 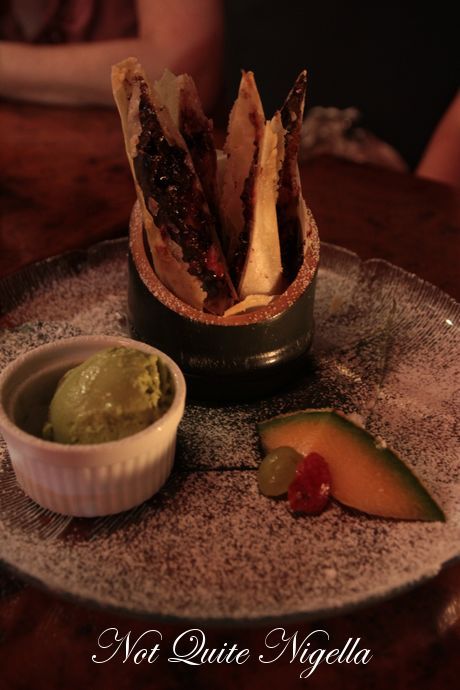 The dessert menu was small and mainly consisted of panna cotta which had sold out, chocolate spring rolls and ice cream. We were really quite stuffed but I know that you Dear Reader always like it when I order dessert so we all shared an order of chocolate spring rolls which had a nice melty chocolately centre. There was a scoop of delicious green tea ice cream which was a refreshing end.

So tell me Dear Reader, have you ever tried real wasabi and do you like it? And do your friends trust your judgement when it comes to choosing restaurants or do they need to be convinced? 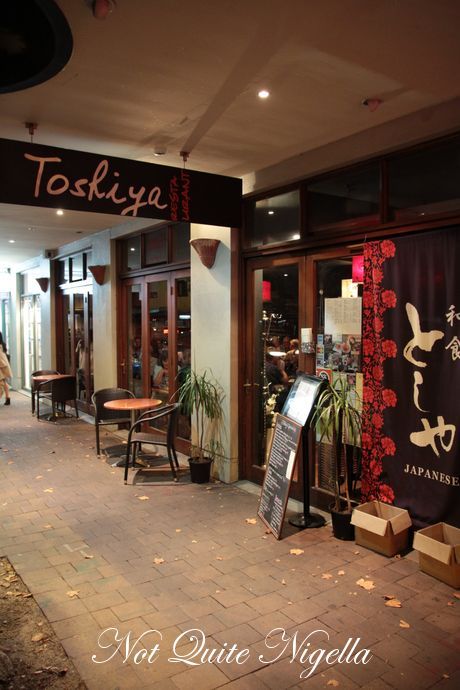 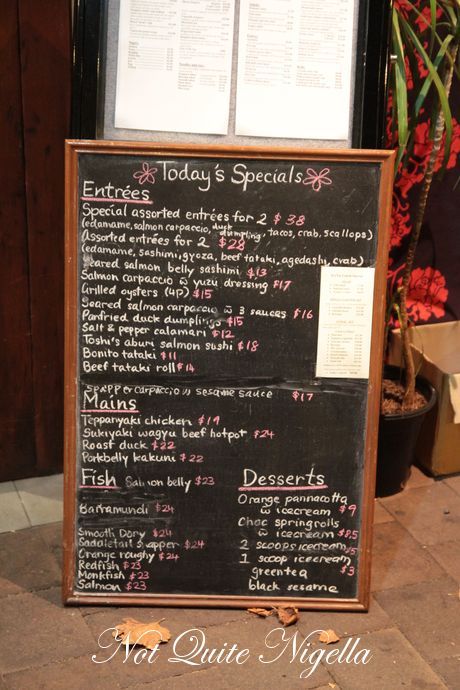