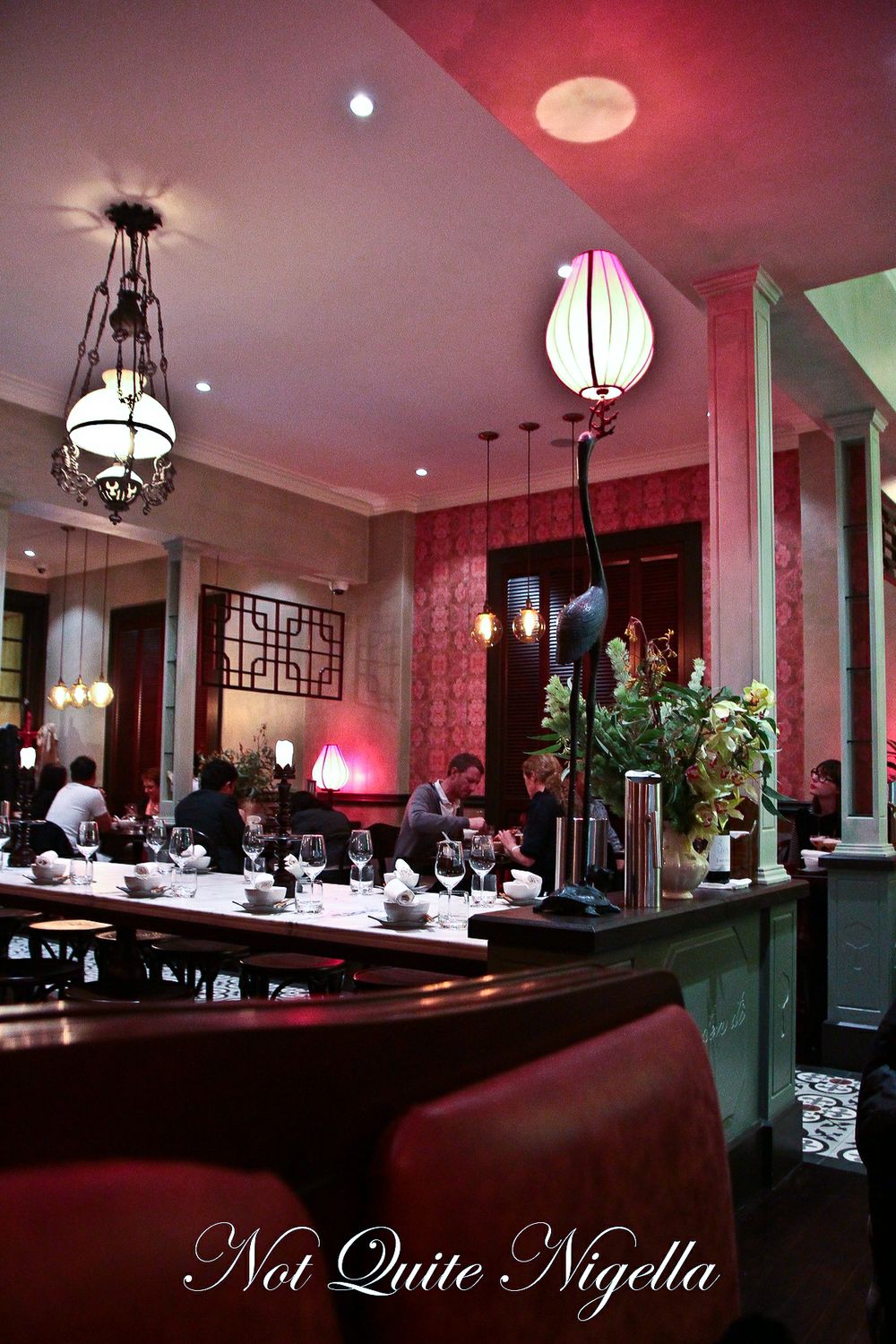 Jet-lag can manifest itself in many different ways. You could be slumped in your soup at 9:30pm at night. A few hours later you could be wide awake at 3am ready to take on the world but keenly aware that the rest of the world is asleep. For me, I was living in a twilight state, head in a bubble with everything going past me as if I were underwater. It was a Thursday night and we were in Christie's car. Head in a cloud, I didn't realise that we were headed in the wrong direction for Red Lantern. We were headed towards the original Red Lantern in Crown Street rather than the newly hatched version in Riley Street. Correcting ourselves, we made a quick u-turn and were on our way. 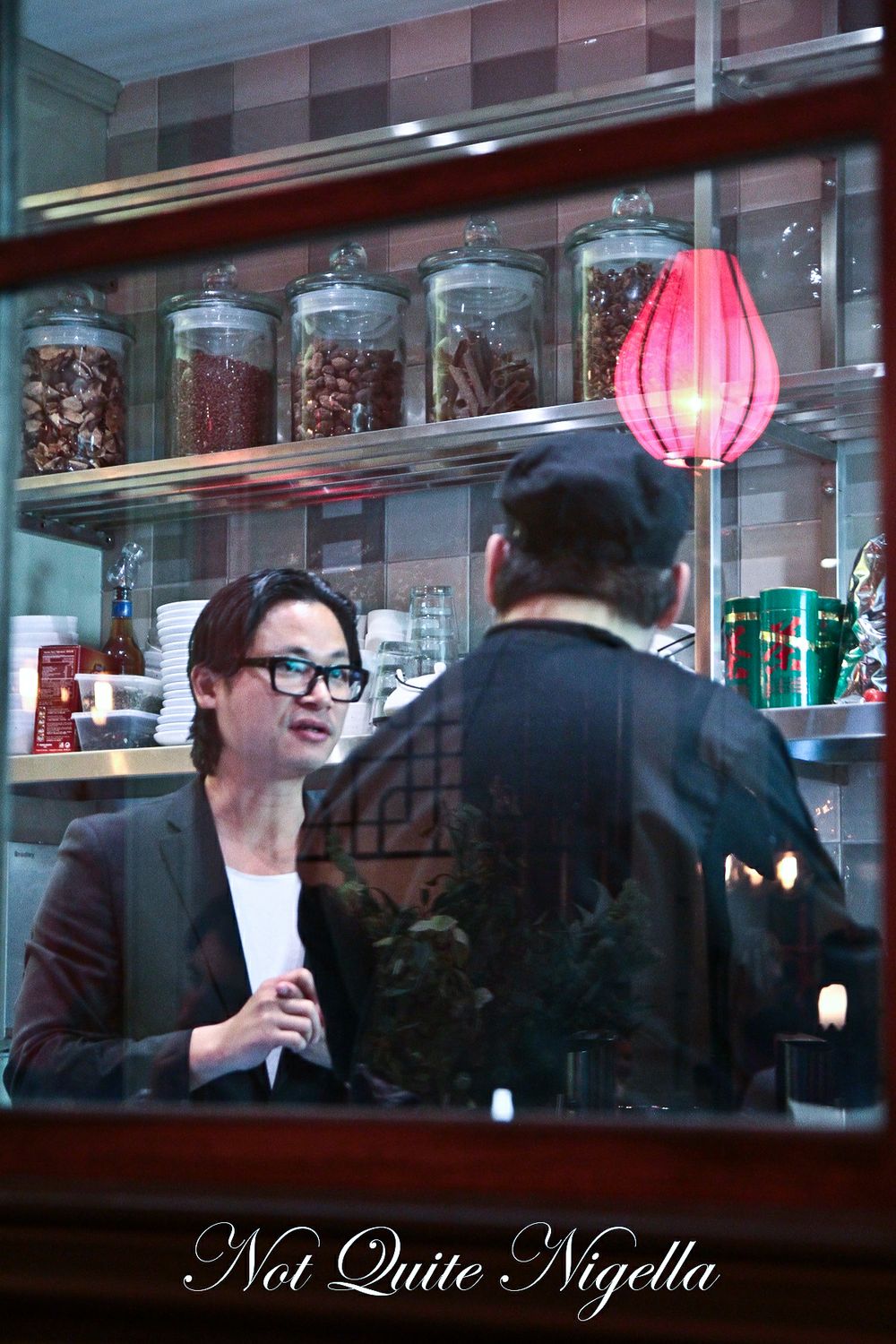 Unlike the original Red Lantern, Red Lantern on Riley Street near the William street end focuses more of the French Vietnamese aspect of Vietnamese cuisine. Subtly signposted, the interior is chic with beautiful hand made tiles that reportedly take four months to make. The walls are covered with a subtle floral rose wallpaper and it is done in colonial chic. Pictures of his family, including a black and white matinee-style photo of Luke Nguyen's dad sits pride of place. There are booths to the right and tables to the left of the restaurant. There are some Red Lantern classics as well as some new items, some of which have a French influence. 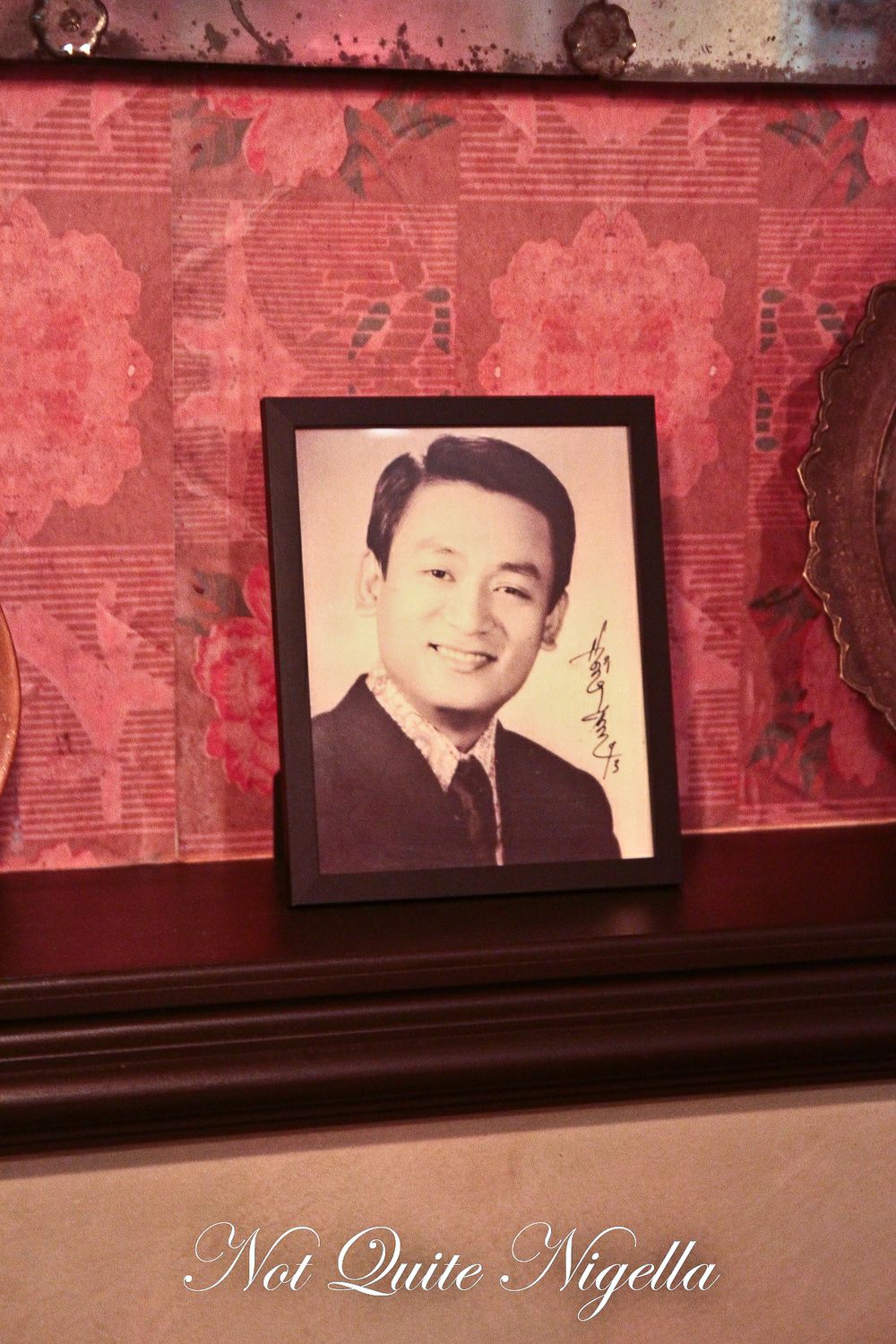 A photo of Luke's father

Service on the whole is friendly and charming, although the staff member who called to confirm the booking was brusque. Luke, newly back from an overseas trip filming, is in this evening bringing plates of food to diners. Even though it opened at the beginning of the month, it is busy and once it hits 8:30pm, the restaurant is full. 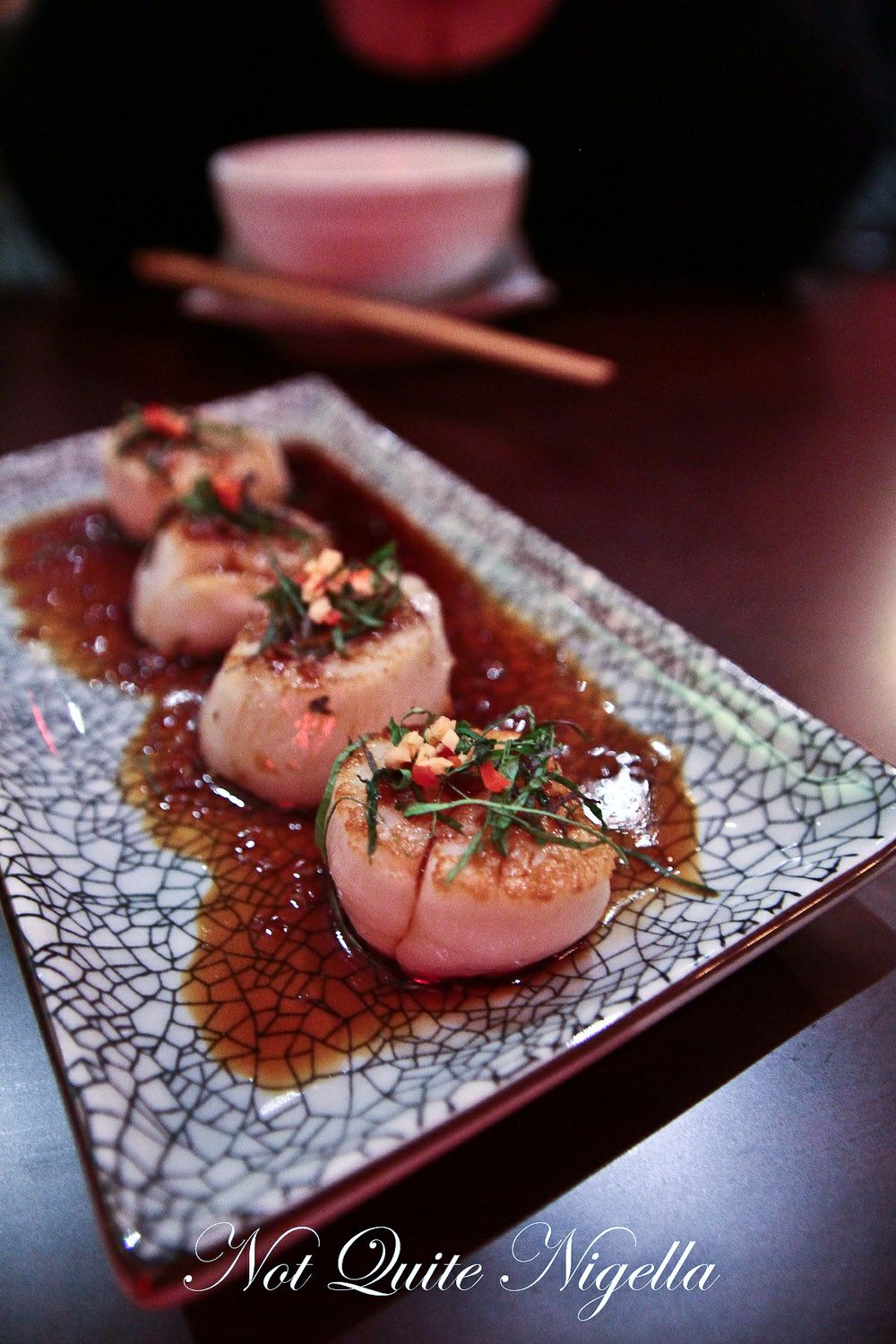 The first entree,  the MSC certified scallops were pan-seared with a tamari, citrus, brown sugar, lemongrass and chilli oil dressing and topped with a chiffonade of kaffir lime and mint. The scallops were tender and oh so fat and just barely seared so that the texture was creamy and balanced with the sweet, fresh dressing. 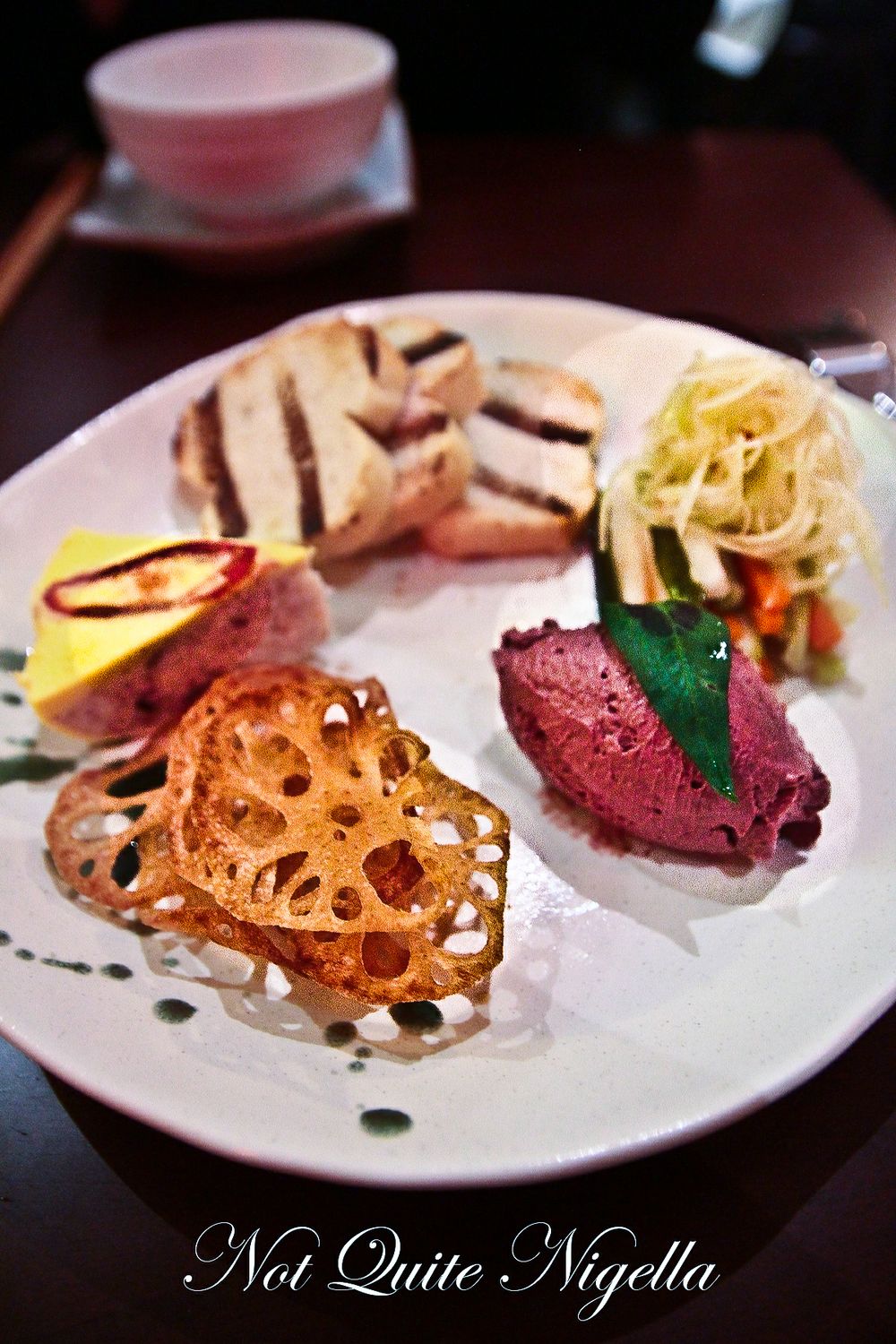 I have a slight obsession with banh mi, those pate and pork filled rolls. This is a deconstructed version featuring house made charcuterie. There is a crab and pork terrine, strong in rich crab and a pate which is strong and balanced well with the pickles, lotus root chips and pickles. We do need more bread than three pieces especially for the strong pate and another three pieces are brought out. 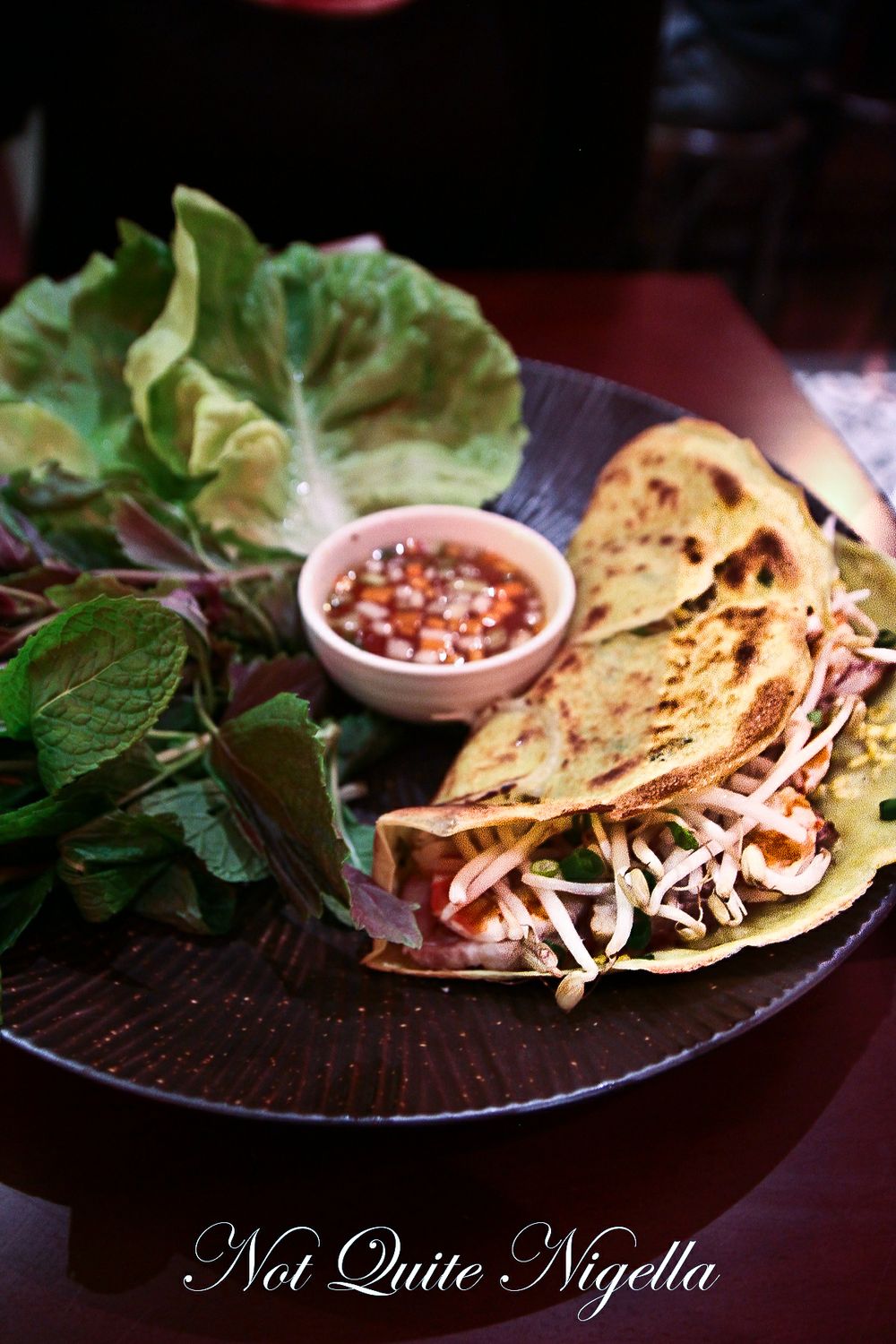 Another favourite dish of mine is the banh xeo and there are two versions on the menu, a regular, a vegetarian version. The rice flour crepe is crispy and less oily than what I've had at other places. It is filled with prawn, slices of pork belly, mung beans and bean sprouts. Accompanying this is four leaves of soft lettuce and mint and basil to wrap it up in. 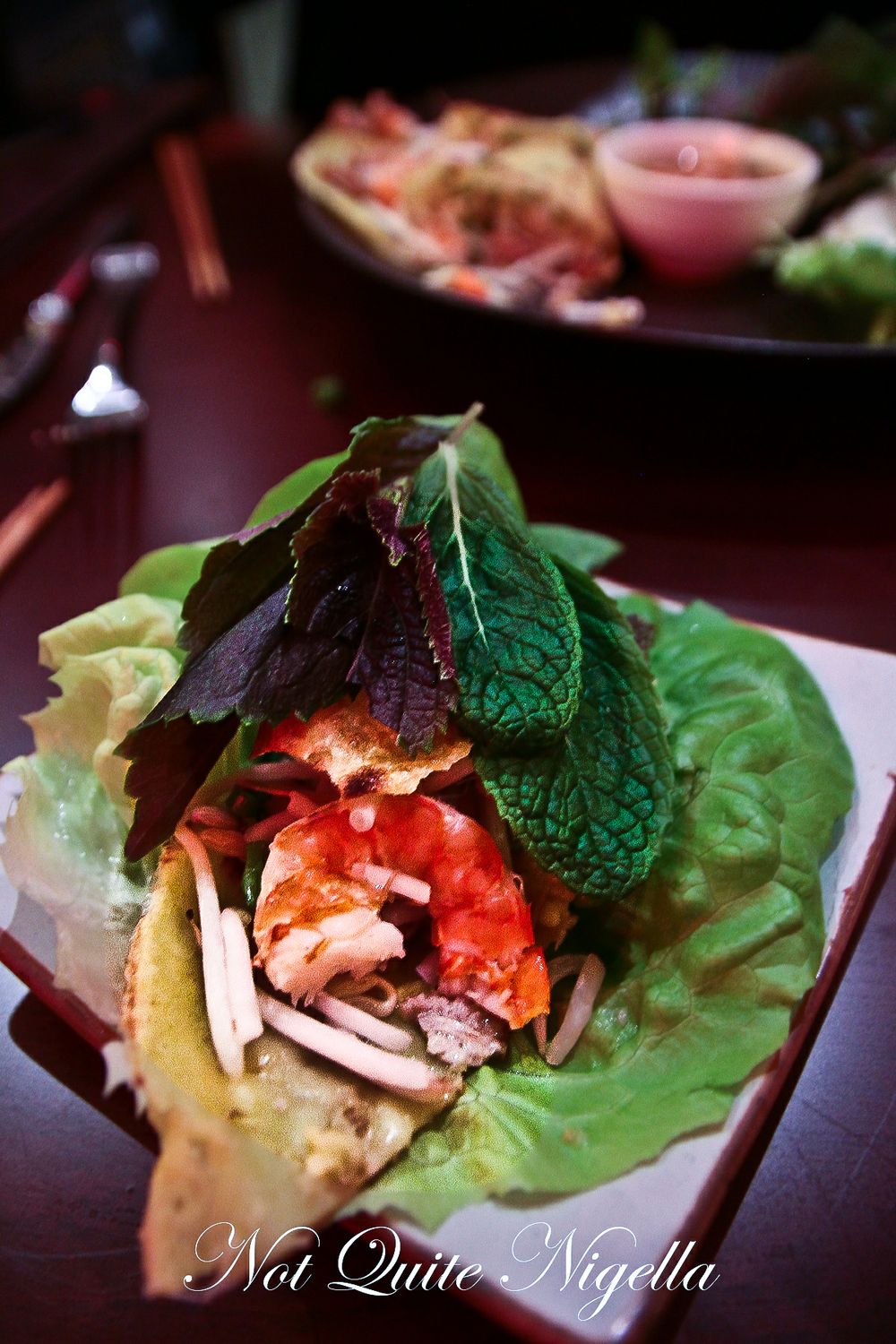 To eat it, you cut it into four, place the quarter into a soft lettuce cup along with the herbs and dip it into the spicy fish sauce dipping sauce. The crunch and spice of this was just what we needed and we liked the sauce so much we kept it on our table (just in case! ;) ). 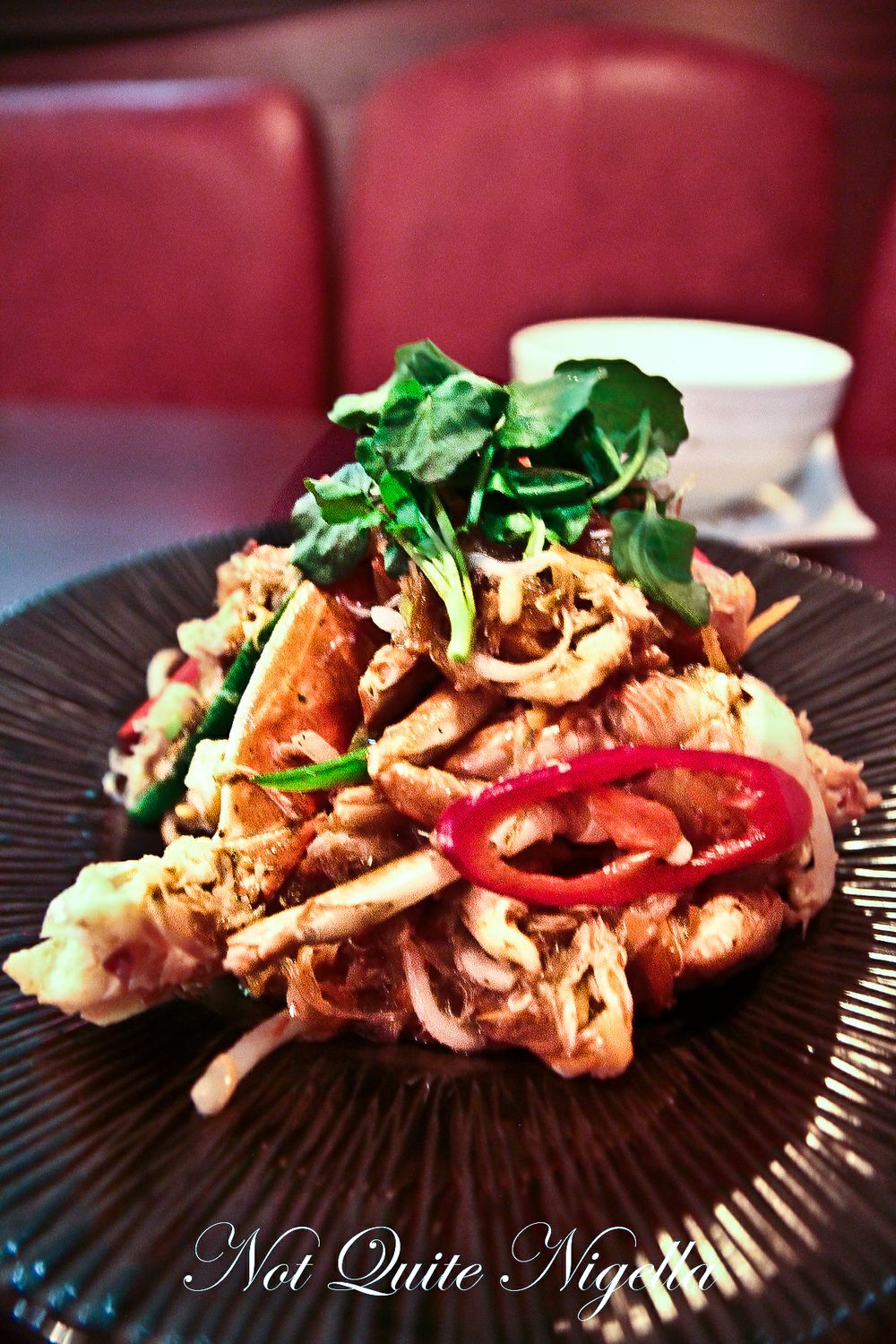 Onto our mains and the crab was something Christie and I both loved the sound of. There is a version of this dish made with prawns at the original Red Lantern. We both enjoyed this W.A. Blue swimmer crab version much more as there were little mouthfuls of crab interspersed with glass noodles, carrot and snake beans and there is a generous amount of their own XO sauce. 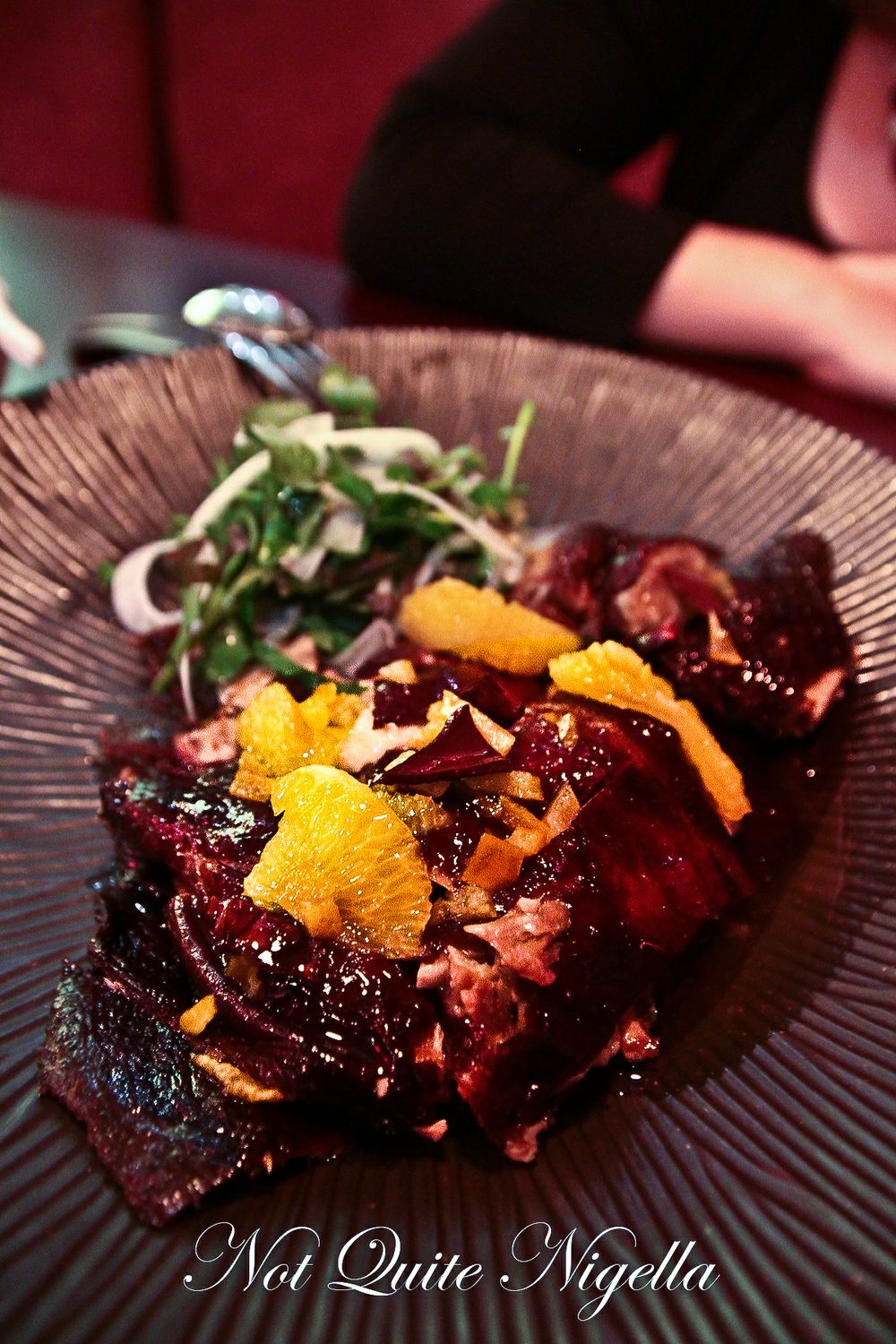 A dish that speaks to the French influence is the roasted Burrawong pekin duck with spiced orange sauce. The duck is twice cooked in a similar way to Chinese style crispy chicken or duck. We watch as the ducks are prepared in the kitchen for the next evening. They coat them in a maltose solution which crisps up the skin once dried to give it a beautifully glassy crunch. It was a rich dish but ended up being our favourite with the acidity from the orange balancing the duck well. The side salad of fennel, watercress and bean sprout salad is a fresh break from the duck's richness. 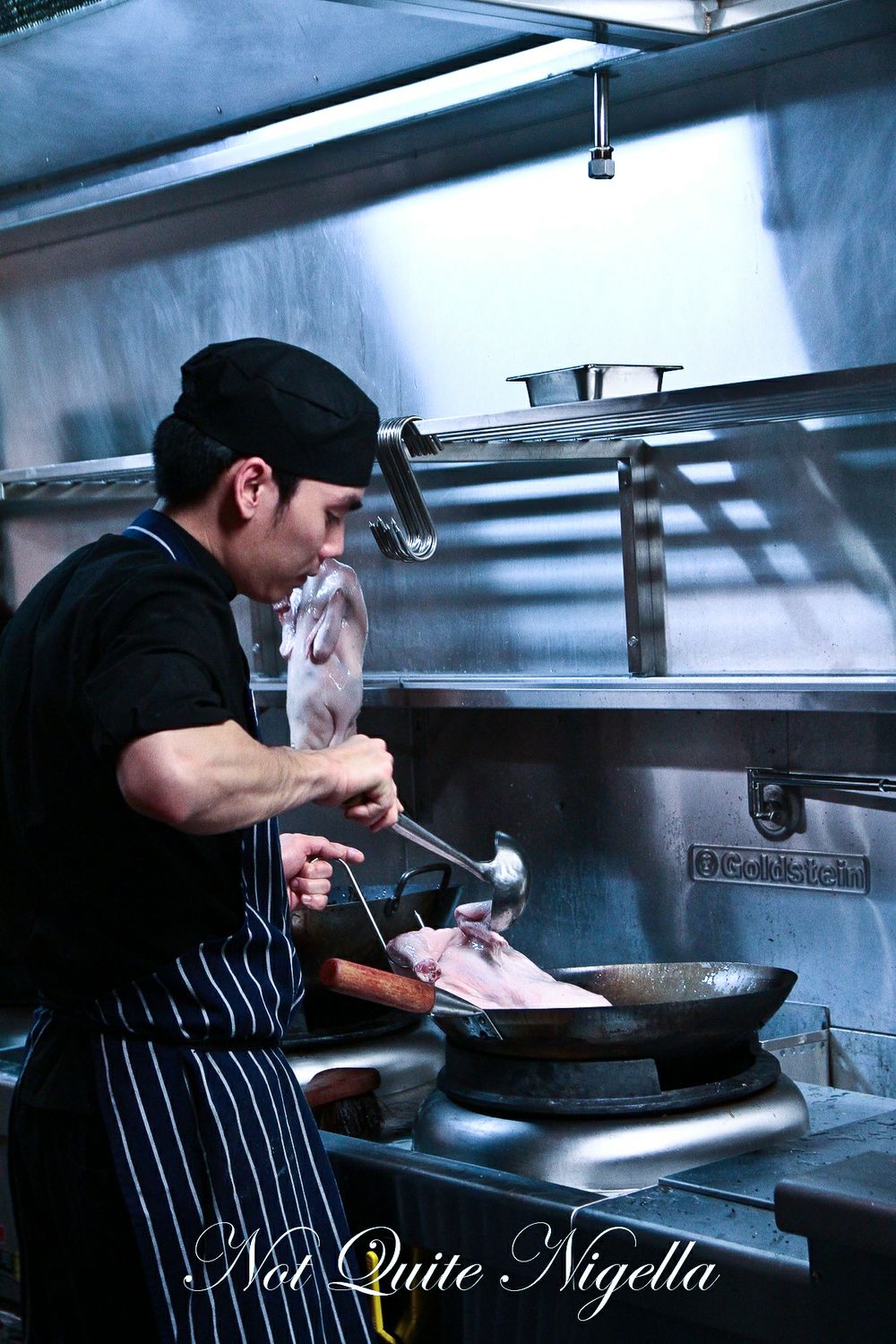 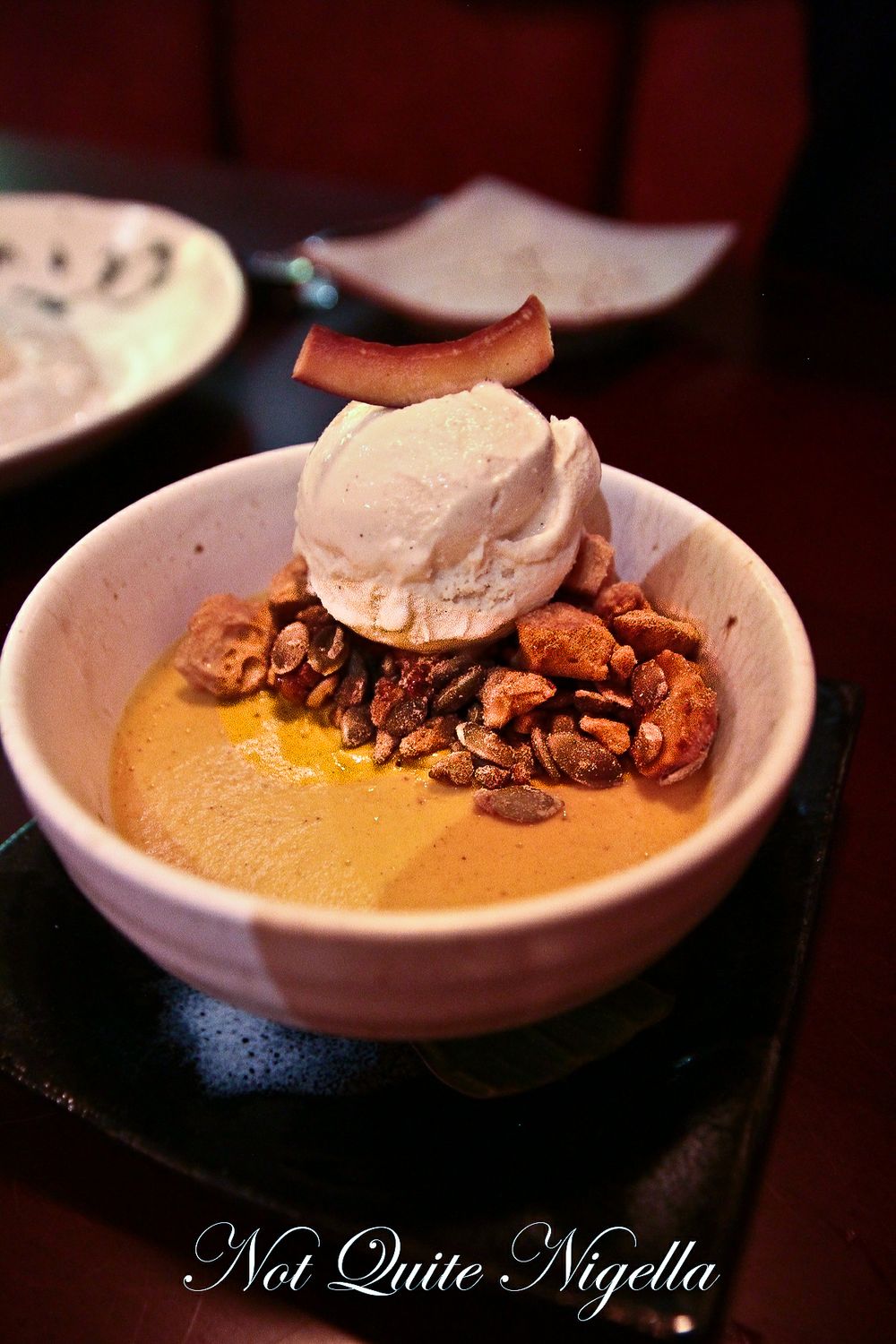 We had a lovely waitress who recommended the desserts for us and we asked if we could put one aside because we didn't want to miss out on it. It was baked pumpkin and cinnamon cheesecake with house made honey comb bits and sweet, toasted pumpkin seeds and a scoop of vanilla bean ice cream. Even though the menu said cinnamon, the flavour was very strong with ground ginger, perhaps too strong when eating the cheesecake or pudding alone. It was much better when eaten with the honeycomb, seeds and ice cream. 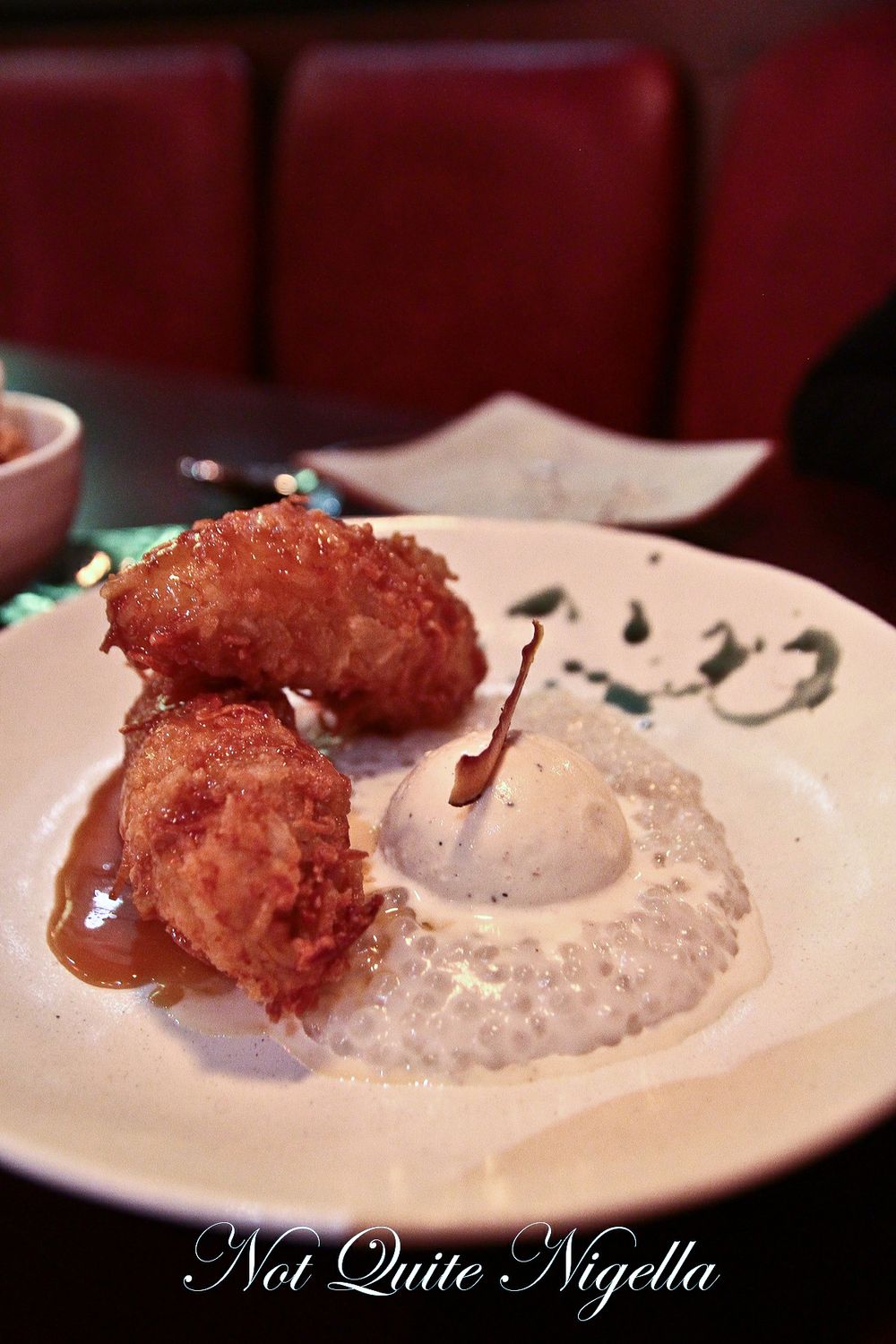 Is it ok to fall in love with a banana fritter? OK that sounded all very Freudian so nevermind ;) Christie and I were both crazy over the seemingly regular dish of banana fritters. Here they're organic bananas coated in a rice flour and shredded coconut which was beautifully crunchy on the outside and stayed crunchy even while eating. It was paired with a palm sugar caramel and a bed of coconut and tapioca with vanilla ice cream. It's the kind of dessert that you definitely want to save room for-or you just make room for ;) 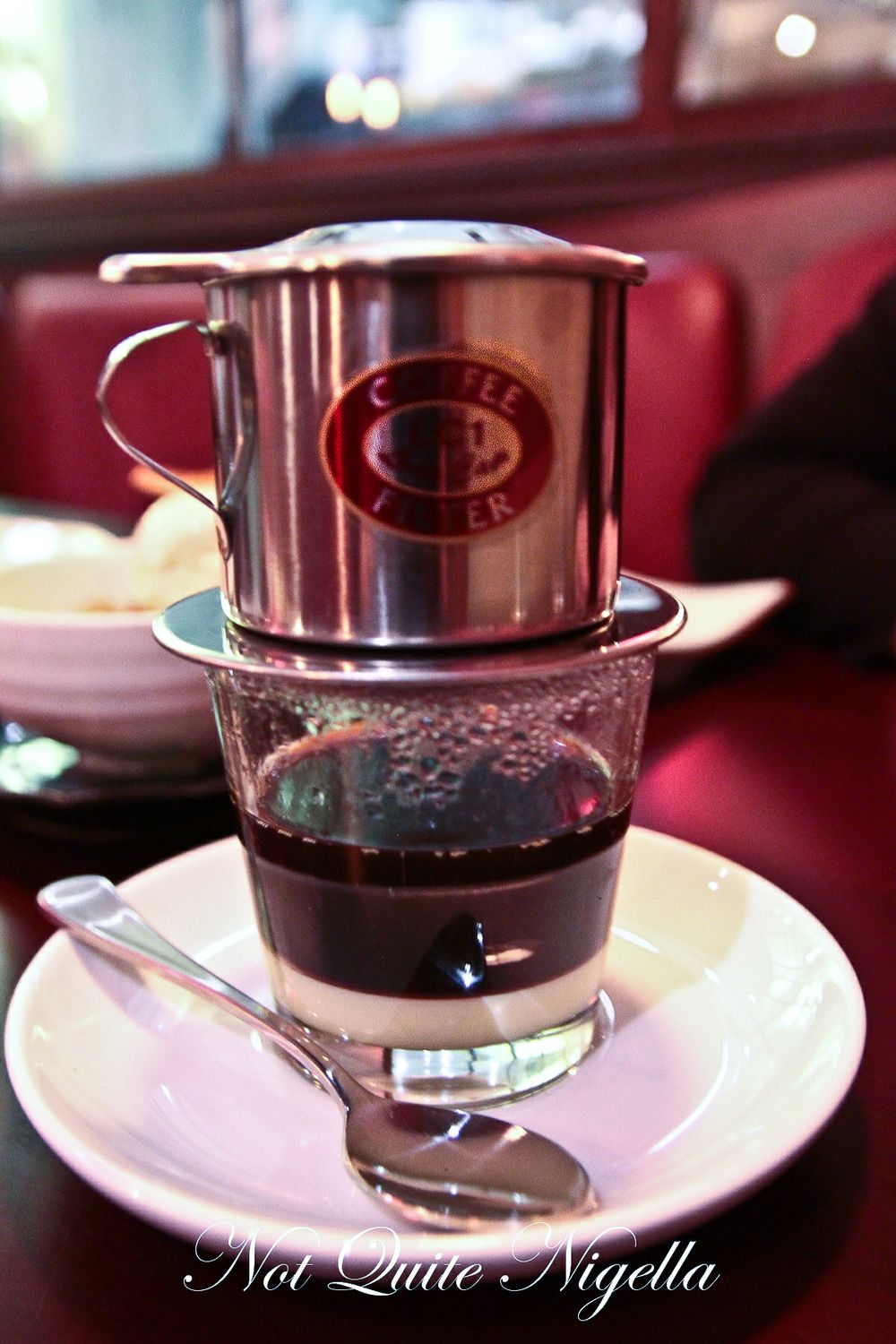 I'm not a late night coffee drinker as it keeps me up at night but it is hard to resist a wonderful Vietnamese coffee with a thick, syrupy layer of sweetened condensed milk on the bottom and coffee on top. And it's probably just what I need to stay awake past 9:30pm!

P.S. I just wanted to add, if you are interested, I wrote a piece for uber blog mamamia yesterday. It's not my usual length as I had a word limit of 600 (which for a rambler like me was a challenge ;)) but I had a lot of fun writing for them. When I saw the post once it was live, the title of the post caught me by surprise. It read "I earn money as a food blogger" which was a little left of field, especially since I hadn't gone into that much detail about how I make a living in the post. If you that are curious, you can read all about it here and I do explain a bit further in the comments. If you have any further questions, you can ask there or ask me here and I will be happy to explain. Many readers seemed keen to know more about taking advertising and sponsorship and how this is done. I'm very fortunate to have fantastic supporters who help to make NQN possible, one such sponsor is Sigma lenses who have been a long term supporter and also provide me with the lenses used in all my photos. They've been with me for two years and I've learned so much about photography using their lenses. They really make the photography aspect of the blog so much fun and I can't thank them enough.

So tell me Dear Reader, do you like reading guest posts on blogs? And are any of you potential bloggers that are thinking of becoming bloggers? And to the bloggers out there, would you want to blog full time or are you happy blogging as a hobby or part time? 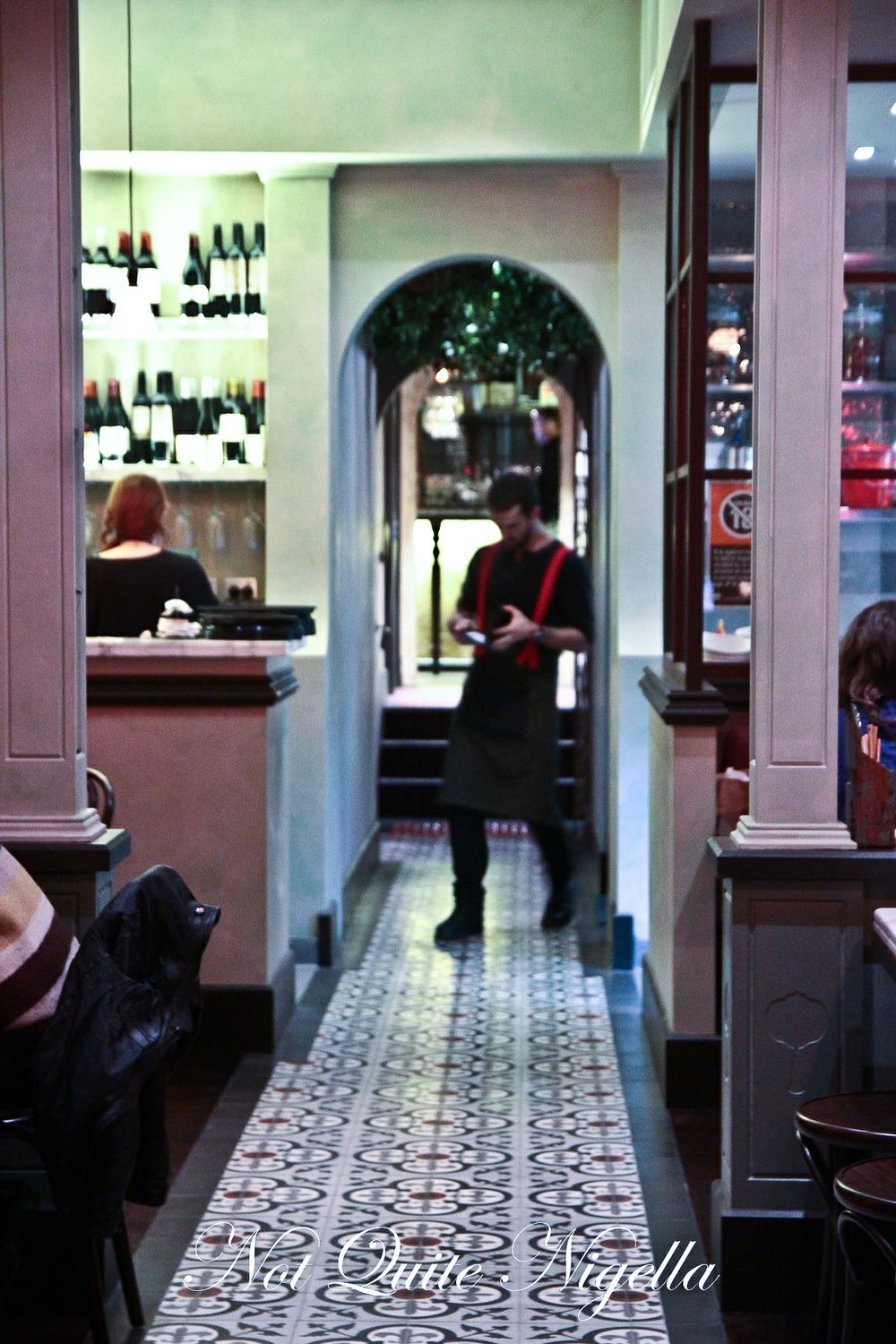 NQN and Christie paid for their meal but were given three (unexpected!) complimentary dishes 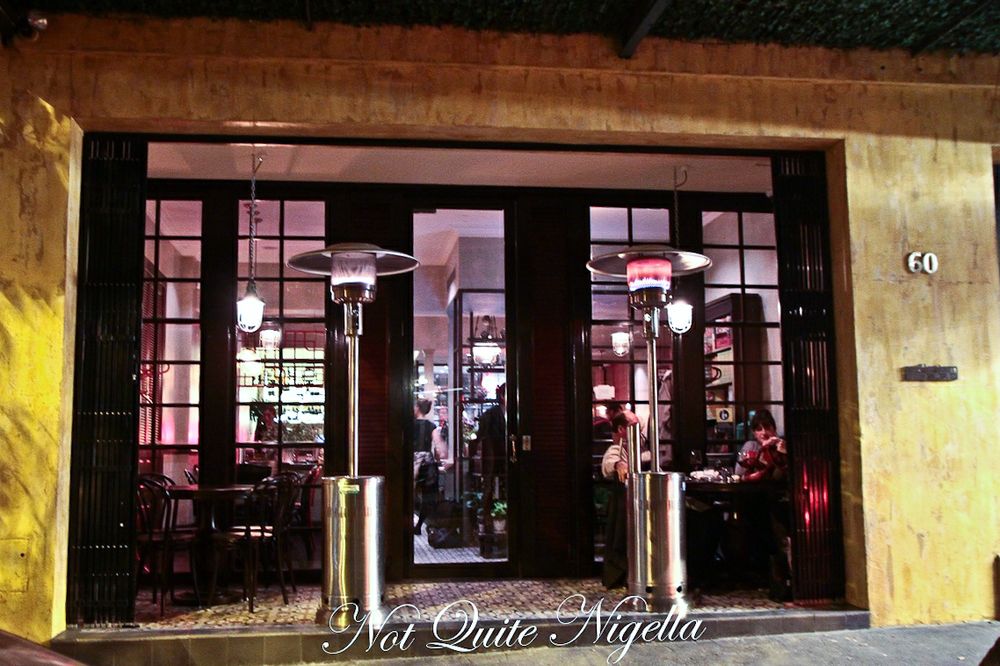