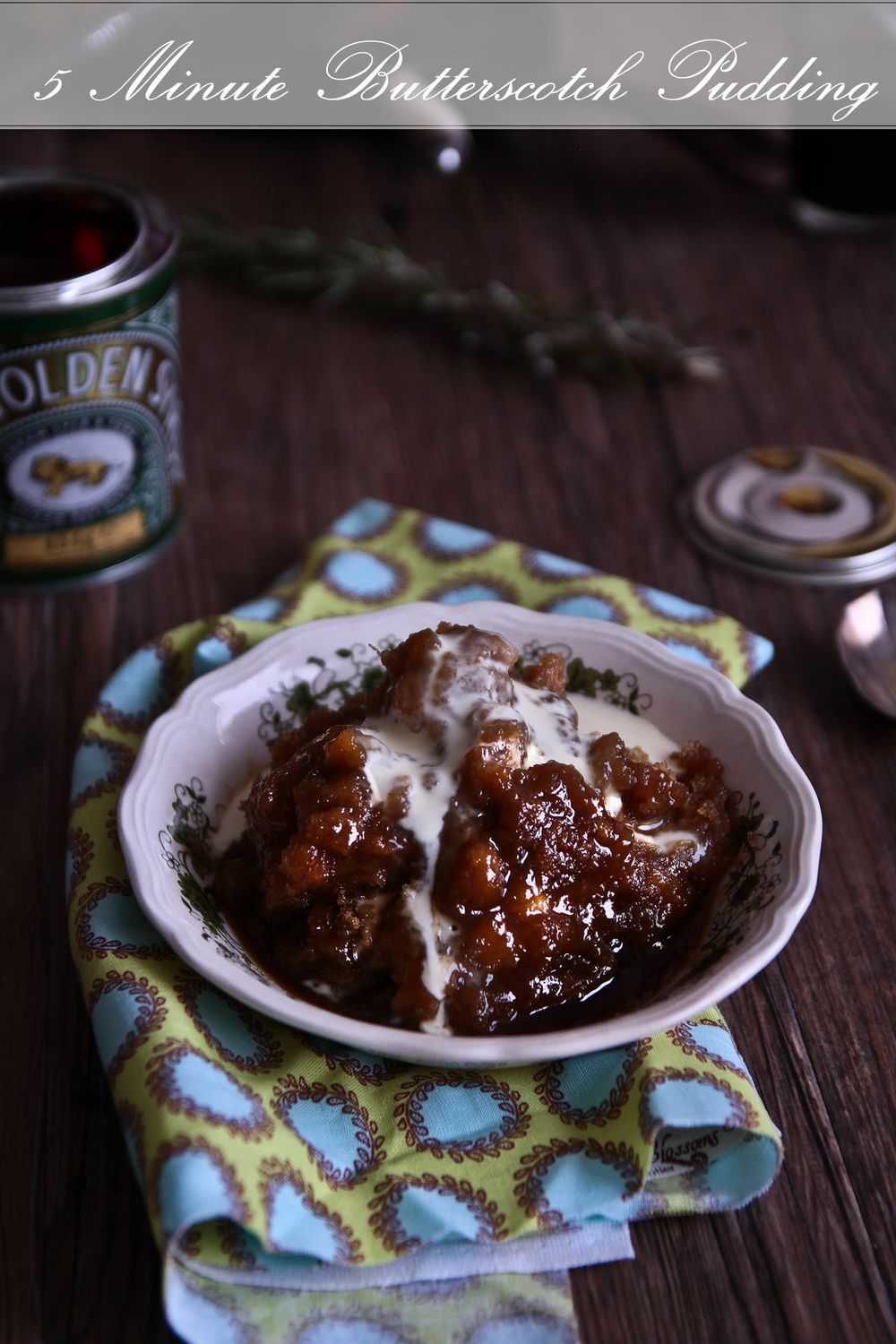 At the risk of sounding really, really annoying, last month, when I was last in Paris (I know, I know...), a few journalists and I decided to try our luck at a bar. The bar we visited was called Zero Zero. It had artful graffiti on the outside and sat across the road from where we were staying in the Marais district. The crowd looked urban hipster-ish and the music was a mix of rap and reggae. Most of the crowd were boys in their twenties. Suddenly, a scuffle broke out just near the bar where we were perched and the room full of young stallions sprang to action in a testosterone filled shoving match. Occasionally during this din, we got a gentle shove - it never escalated to punches being thrown but one member of the group asked us "are you ok?"

"Oh I'm fine!!" I said gaily, the effect of the dangerous free-pour mojito which was about 90% rum going straight to my system. "This sort of thing never happens in restaurants. It's quite exciting! I feel like I'm a kernal of microwave popcorn!" I said.

I know, I am lucky that I didn't get squashed or hit but cocktails do give you false courage or just complete blindness to danger. Speaking of microwave popcorn, I know it's not fashionable to use a microwave. I once tried doing without one when ours stopped working but I eventually capitulated and there are times when you honestly feel like you can't do without one. Like when you are cold and want nothing more than a saucy pudding for dessert. 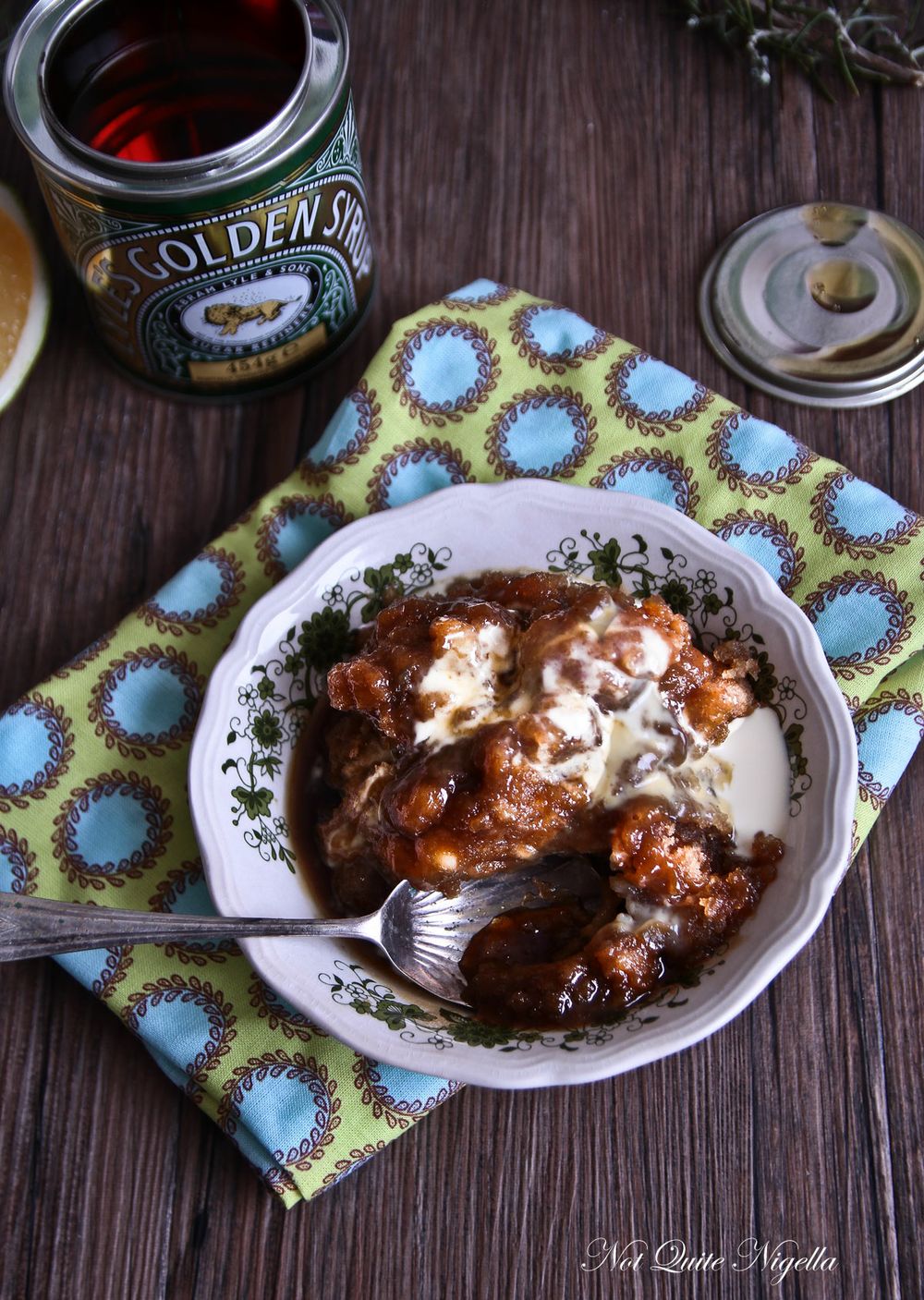 I first came across this recipe on Uru's blog Go Bake Yourself. She's a fab teen food blogger and as she is studying for her exams, she sought comfort in a microwave recipe for a five minute self saucing banana butterscotch pudding. I was fascinated by the idea that you could get a self saucing pudding out of an eggless recipe in the microwave. She assured me that the sauce would somehow miraculously appear so I set about making it one rainy winter's night.

A part of me wondered if it would work with her assurances assuaged me. Truthfully, the raw batter looks strange and unappetising and it isn't strictly a five minute job but I thought that perhaps 6 minute pudding didn't sound as catchy but it doesn't take more than that really. I adapted it to use tablespoons because the times when I need these sorts of desserts are late at night when I don't want to go to bed just yet and I want something comforting and the dishes are all done. This just requires a bowl, a jug and a tablespoon or two. 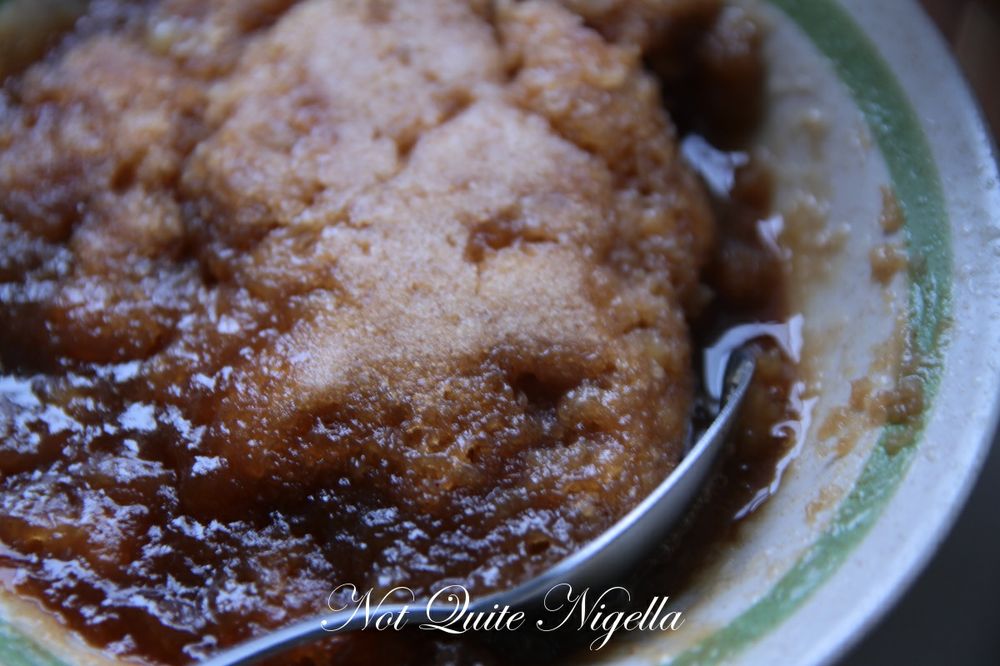 I microwaved it for 60 seconds on 75% power and then in two 30 second bursts on 75% power checking on it between. After the last, I peered at it and clapped my hands excitedly. The pudding was puffy and soft and when I lifted the cling film off and scooped my tablespoon into it, there was a syrupy sweet moat of golden butterscotch. All it needed was a pouring of cream and I had suddenly had my winter night saver.

So tell me Dear Reader, do you own a microwave and do you use it much and do you just reheat or do you cook with it? Or do you feel that you don't need or shouldn't use one? 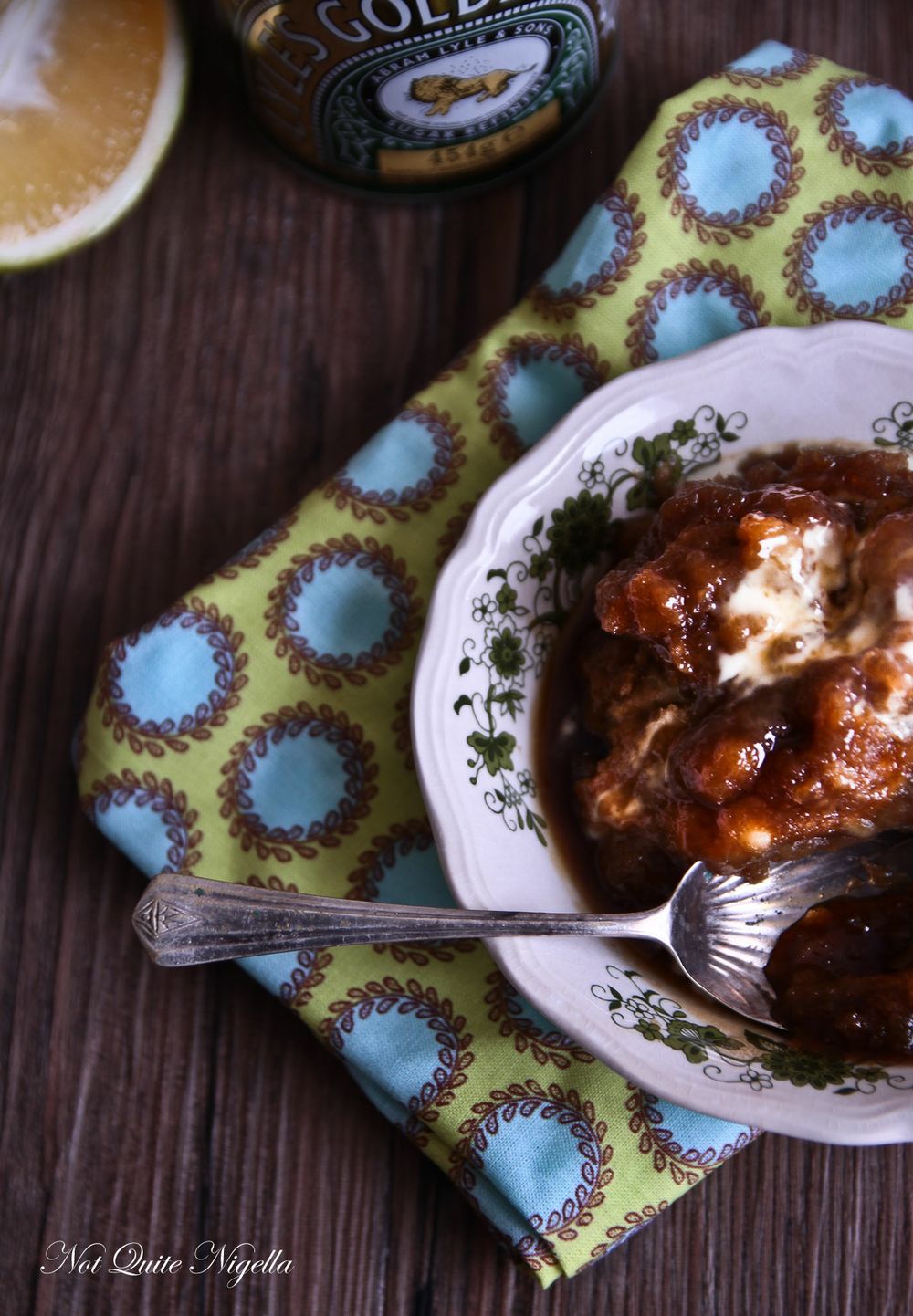 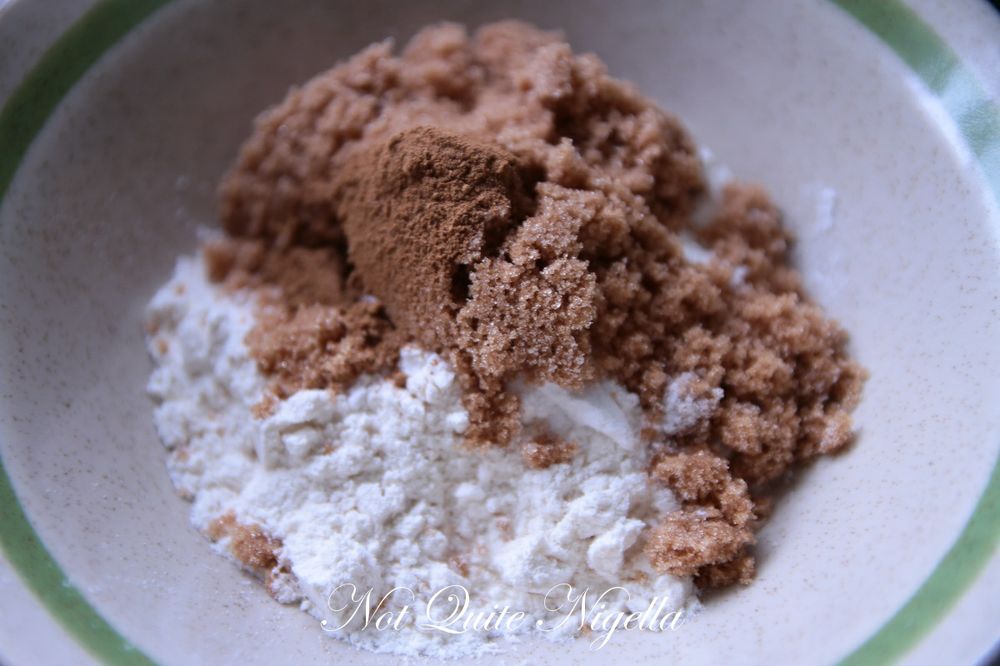 Step 1 - In the serving bowl, add the flour, baking powder, brown sugar and cinnamon using a fork or whisk to break up any lumps and to mix it up well.

Step 2 - In a jug or another bowl, melt the better and then add the milk, vanilla and banana and mash the banana into the mixture. Add this to the dry flour mixture and stir to combine. 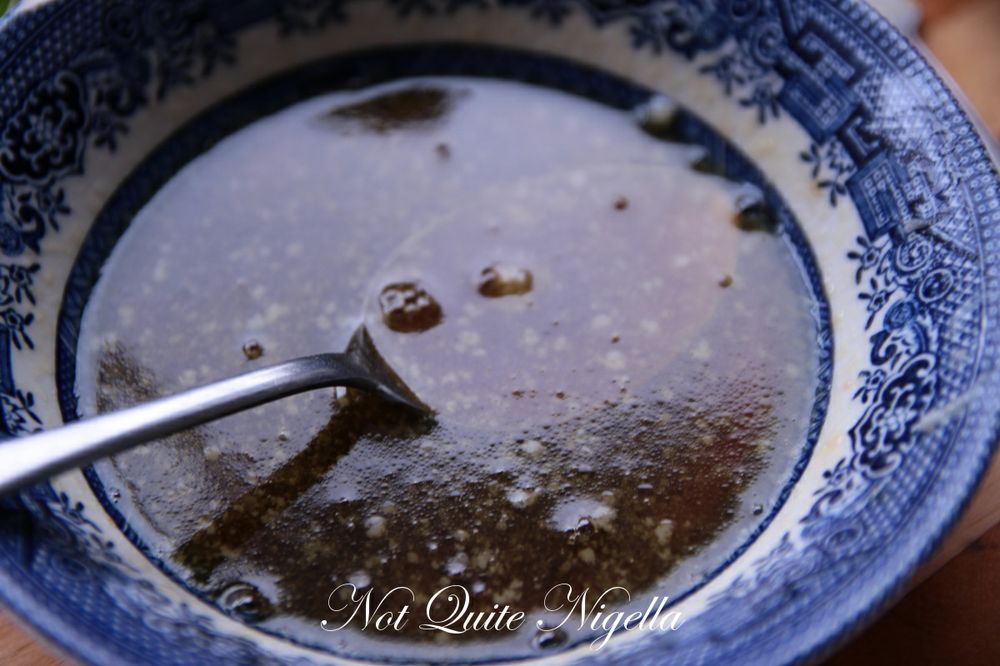 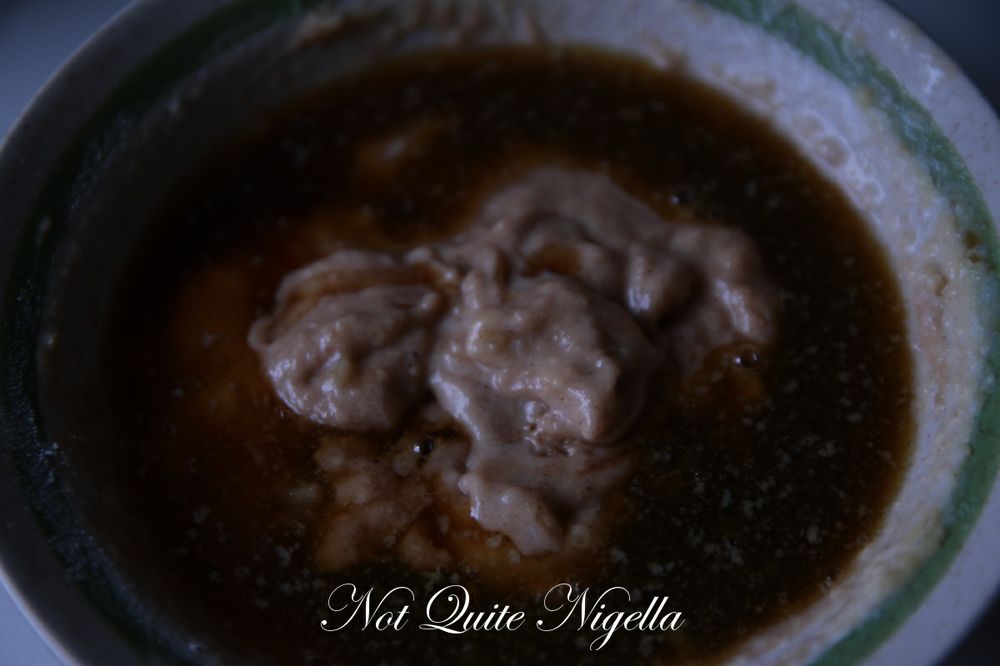 I know, it looks dire, but it becomes something entirely delicious!

Step 3 - In a jug or cup, place all of the sauce ingredients (the boiling water will melt the butter) and stir to combine. Pour over the batter in the bowl (yes, I'm serious, you really do pour the liquid over). Then cover with cling film. Microwave on 75% for 60 seconds, then microwave on 75% for 30 seconds until the batter is fluffy and cooked. Carefully remove cling wrap and check underneath for that glorious river of golden sauce. Serve with ice cream or cream. 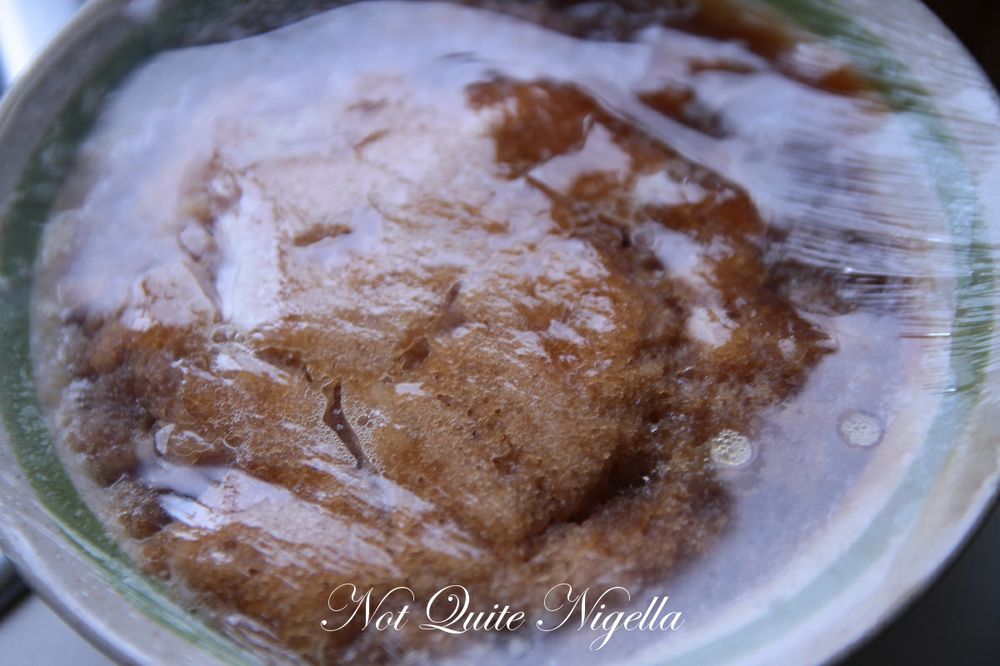