The Light in Antibes, France 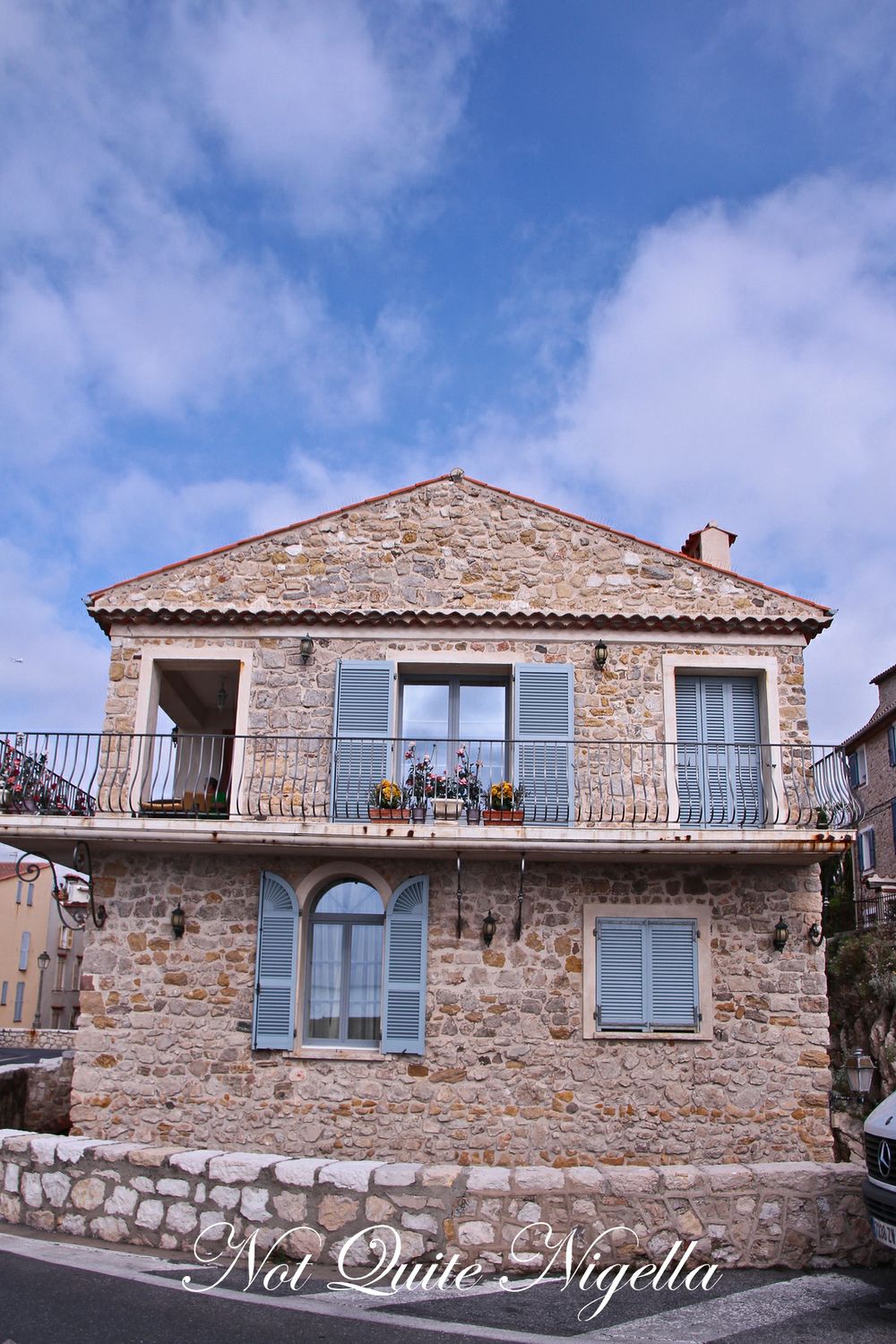 What's the first thing that you think of when you think of Antibes? Is it the Hotel du Cap, the holiday destination for celebrities like Brangelina, Madonna, Johnny Depp or other wealthy celebrities? Or is it the less fast-paced side? The painter's trail where Picasso, Chagall and Monet  found the light in Antibes so spellbinding that they set up easel and started painting? 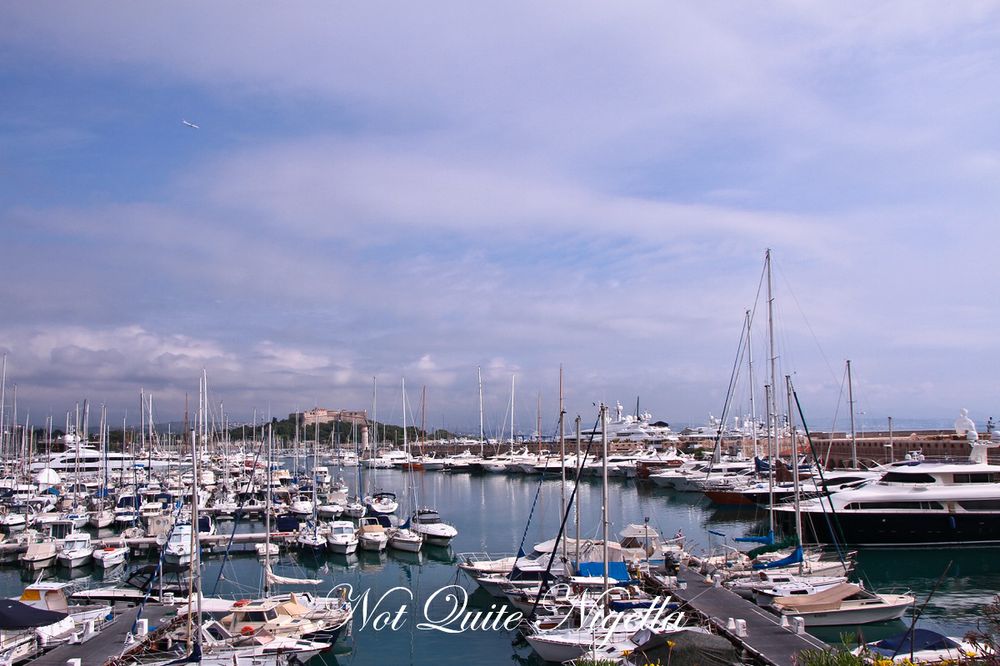 We are on day two of our trip through regional France with Rail Europe. Although we haven't taken a train yet (that's tomorrow), we take the 30 minutes drive from Nice to Antibes where we first stop at Cap d'Antibes which is the billionaire playground of the Antibes. The marina is the second biggest in the Europe add you may find the super yachts of billionaire Roman Abramovitch moored here. Overlooking this is Fort Carre as Antibes was a lookout fort for the military. Juan Les Pins is the nearby nightclubbing and shopping area not unlike the Gold Coast or Bali strips of shops, restaurants and bars. Cafes are set up for maximum people viewing and the area is busy as shops open until late at night.

We pass the town of Villeneuve-loubet which a pilgrimage for chefs as it is the town where  famed chef Augusted Escoffier was born. There is a museum that features his menus and equipment. 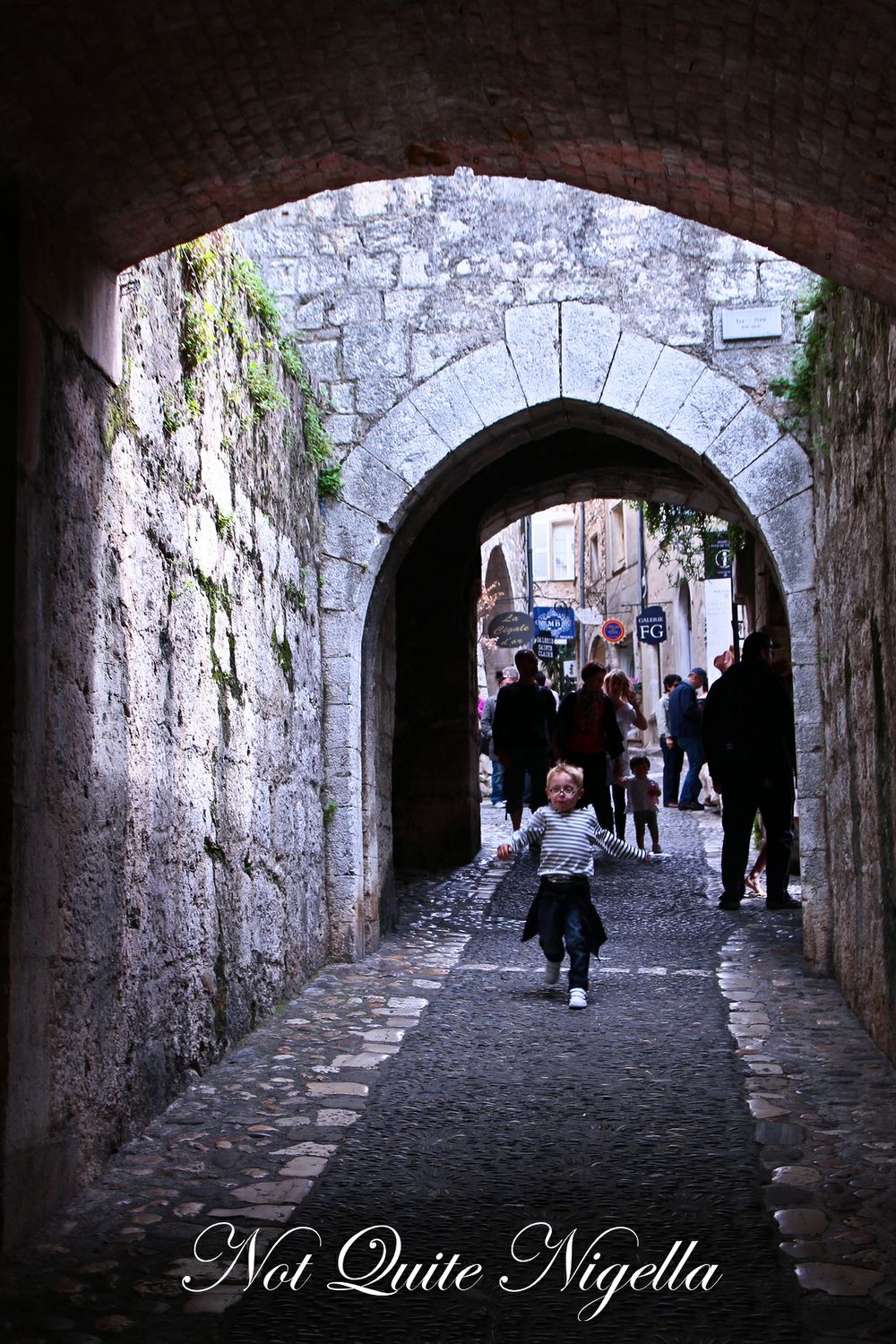 Nearby is the old town of Saint-Paul-de-Vence  which is worth a stop. With less than a thousand residents, the town has been beautifully preserved and features pretty boutiques. 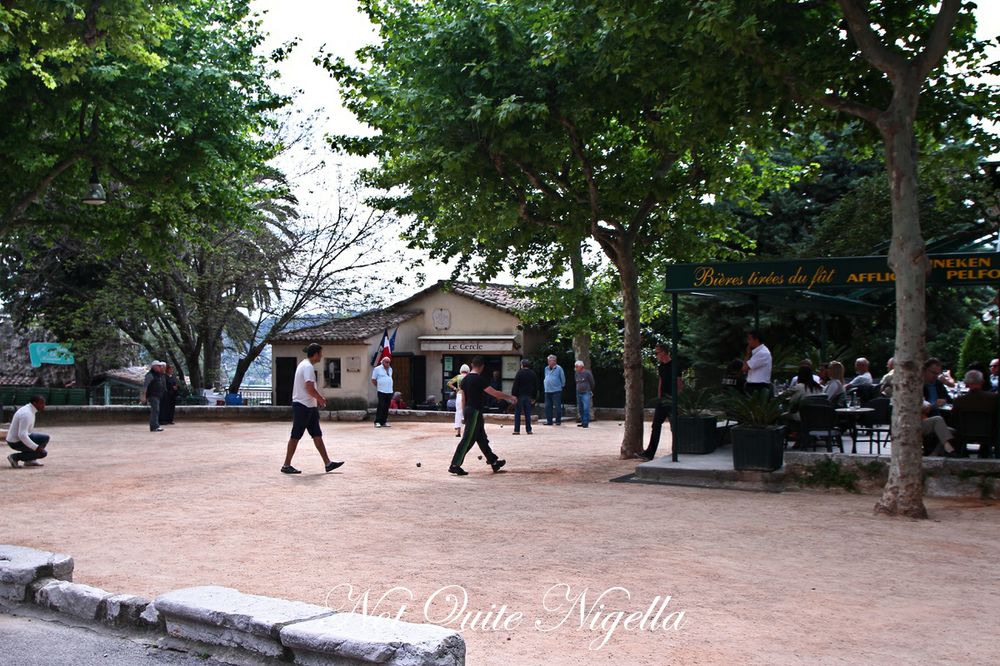 Actor Yves Montand was known for playing petanque there during his time. Artists like Picasso, Matisse and Chagall have spent time at Saint-Paul-de-Vence and the many boutiques sit alongside art galleries. Leave yourself at least an hour to explore the winding streets and alley ways but don't wear heels! The pretty star shaped cobblestones are not for heels. 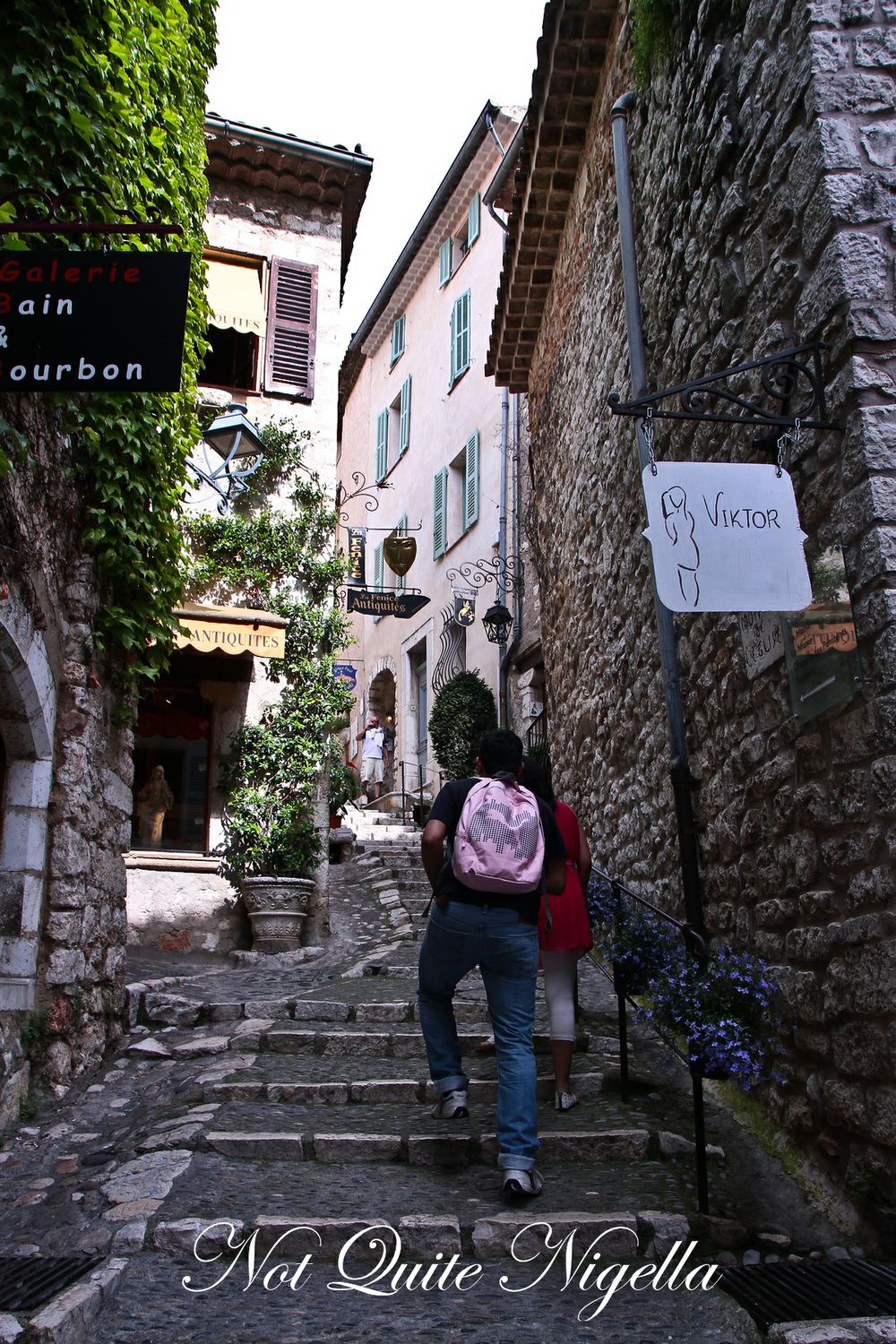 The Antibes are known as a place that has attracted many painters including Monet, Peynet and Picasso. There is a painter's trail which is about an hour's walk from end to end and shows where these painters painted their famous works and it's wonderful to be able to see the view behind the panels. 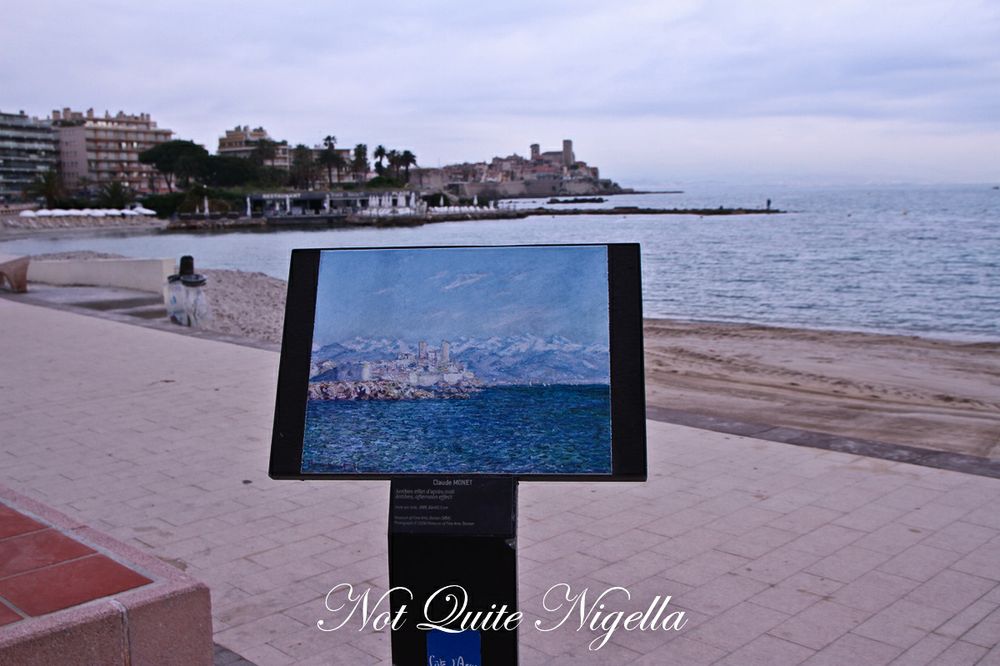 Claude Monet's interpretation of the view 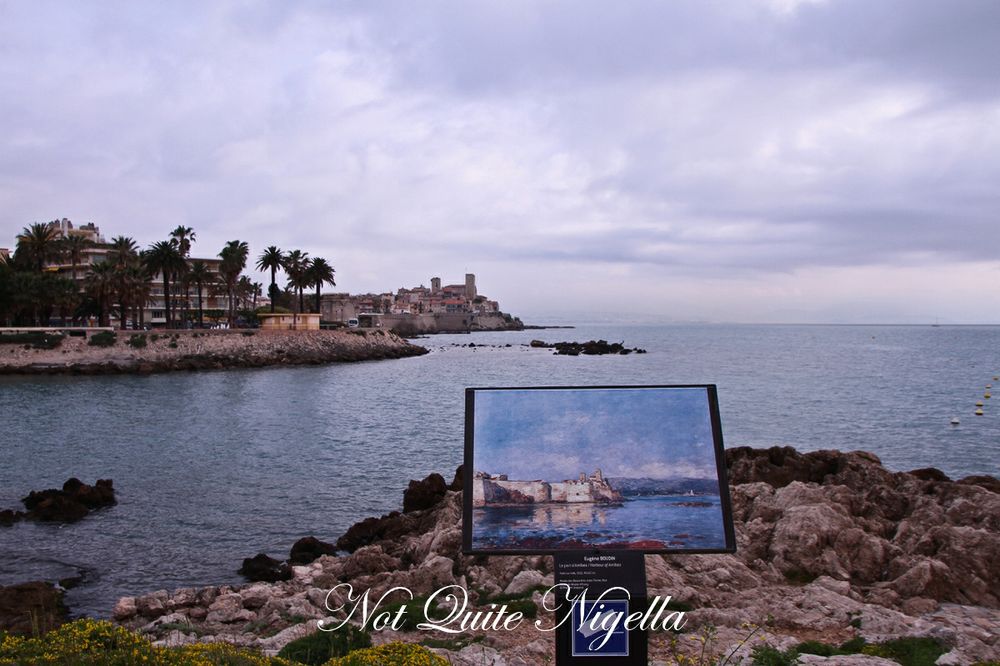 Eugène Boudin's interpretation of the view 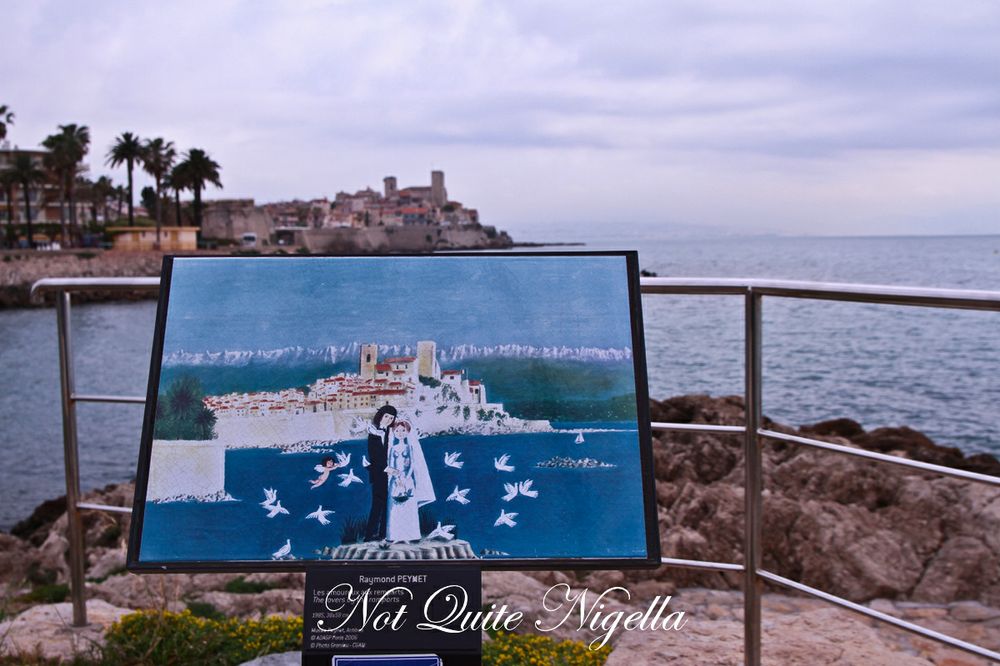 Raymond Peynet's interpretation of the view 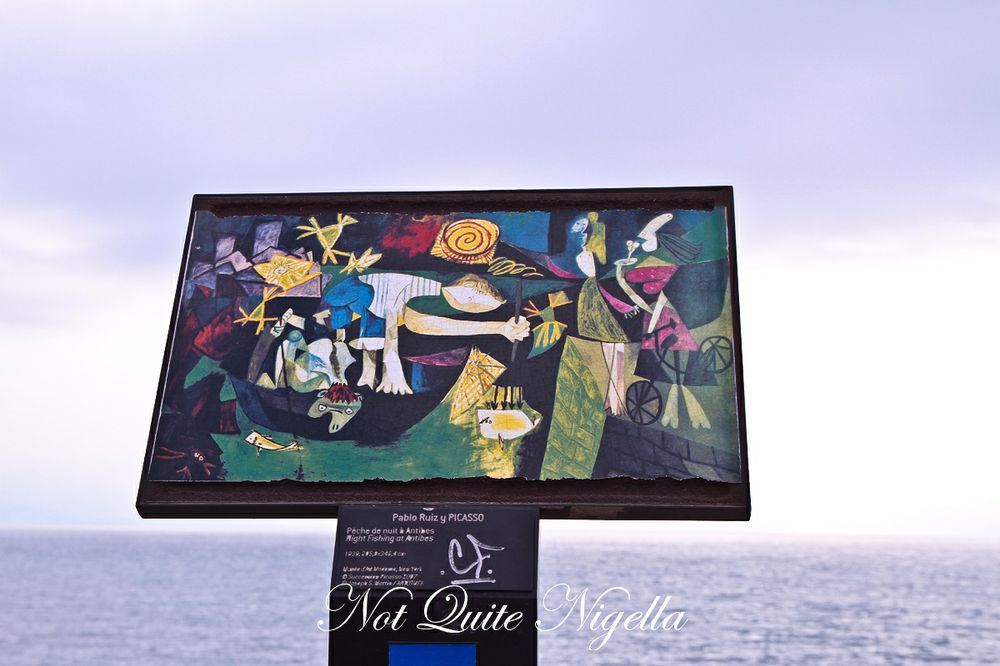 Pable Picasso's interpretation of the view 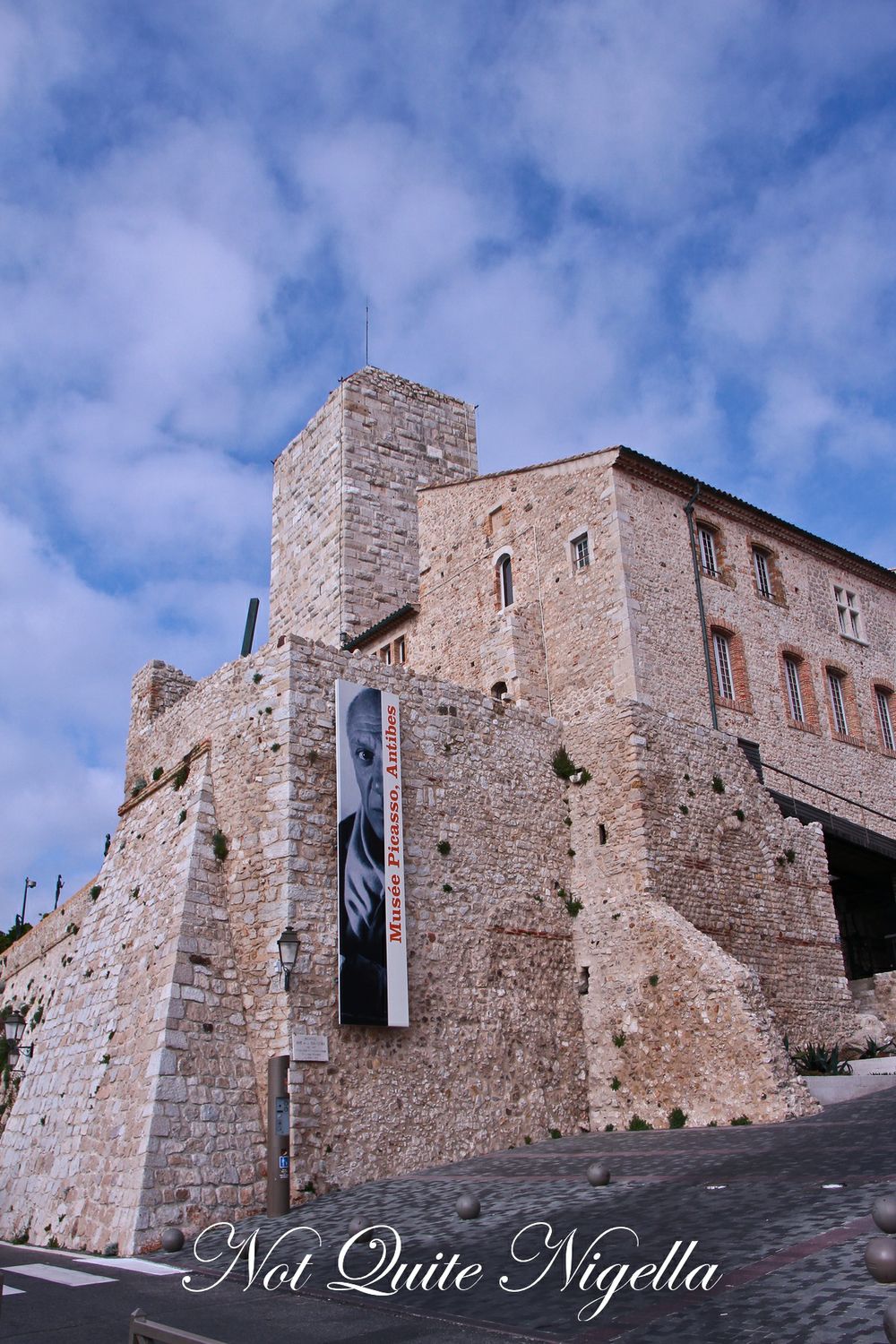 There is also a Picasso museum dedicated to the works that the famous painter created during his time there in 1946. The sandstone building was the site of his studio. At the end of his stay there, he donated all of the works (over 40 paintings and over 20 sketches) to the town of Antibes. They now feature in this museum as Picasso wanted people to see them in Antibes. 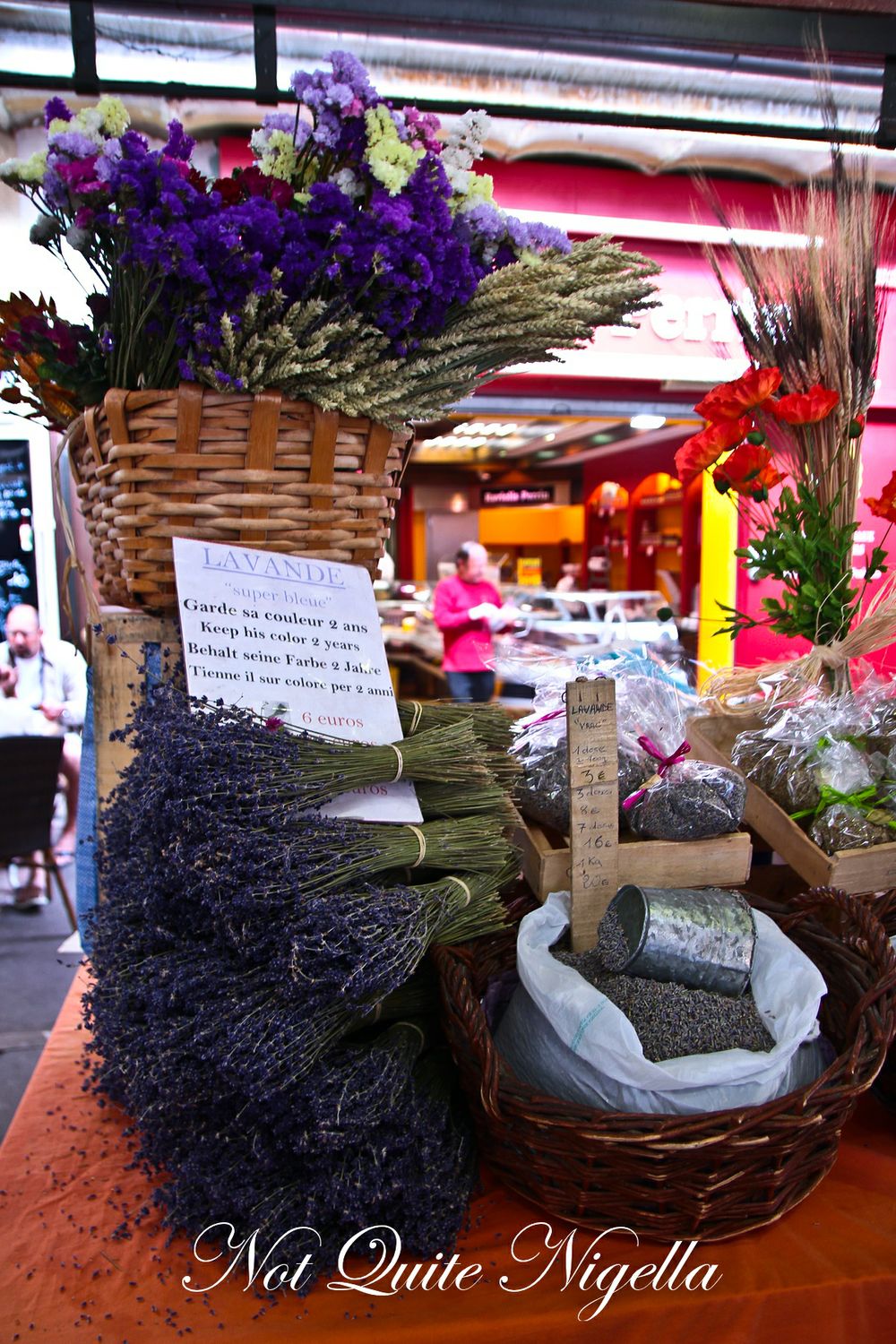 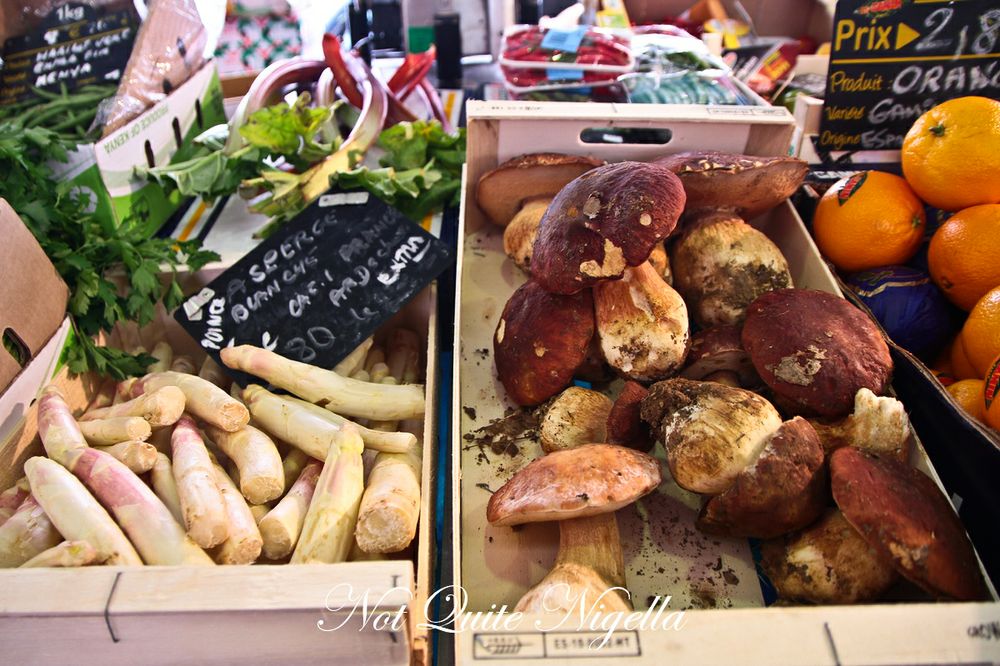 We take a drive to the Provencale markets which are on every day but Monday and there are a range of items from cheeses, pastries (including ones with with lemon cream and coffee cream), dried lavender as well as some lovely jams including a wonderful lychee jam and a rose jam. 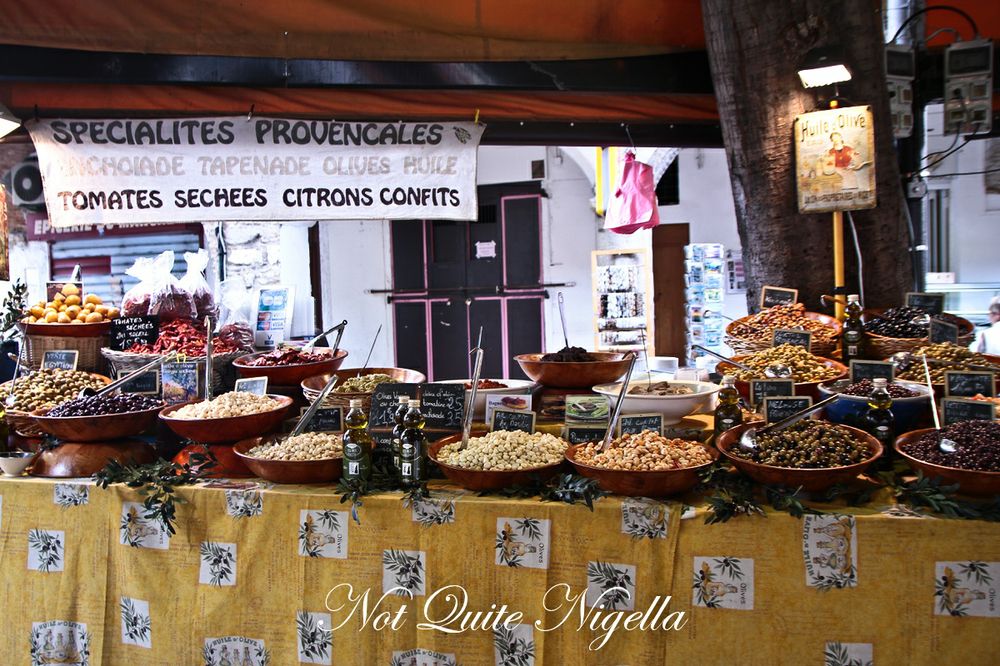 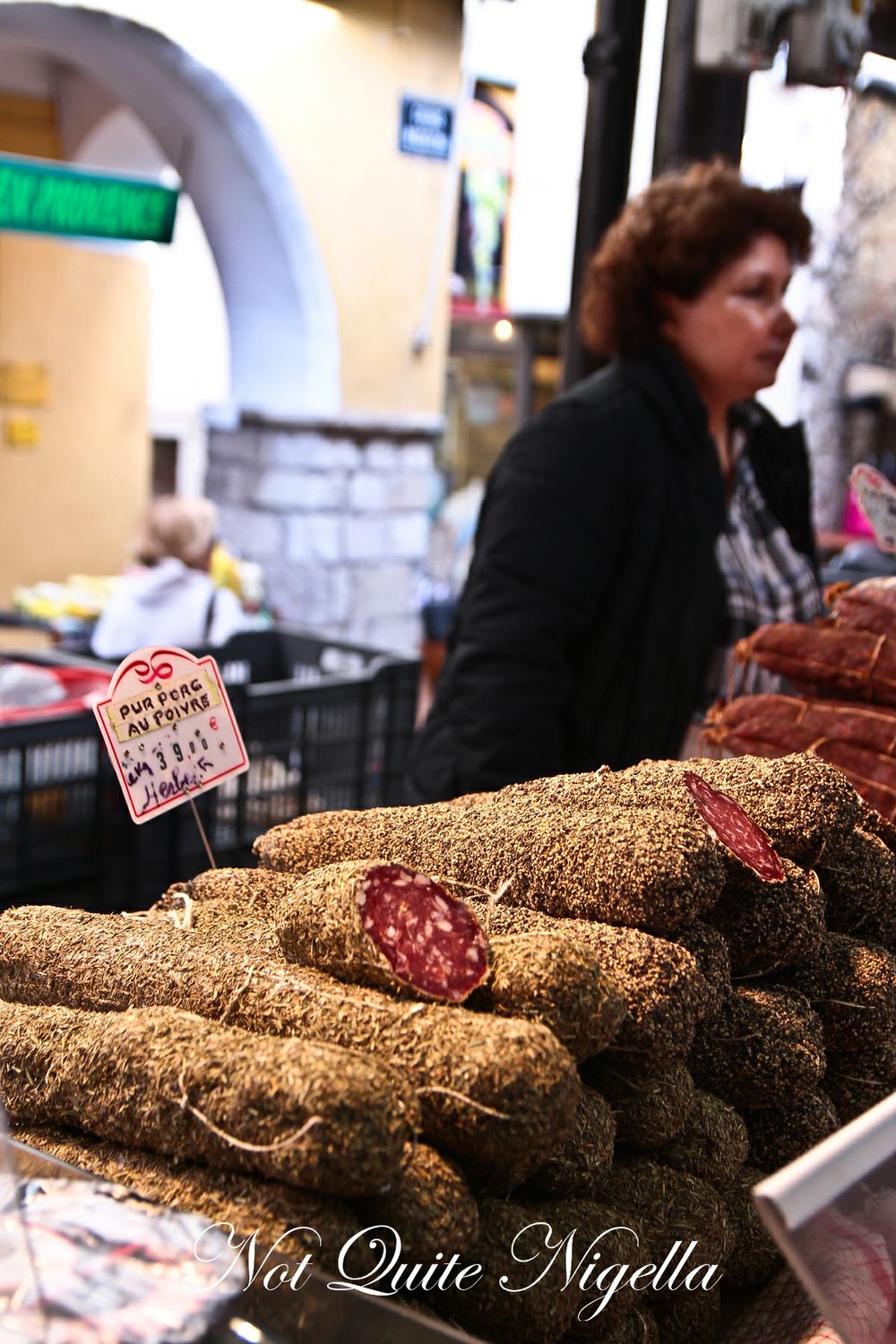 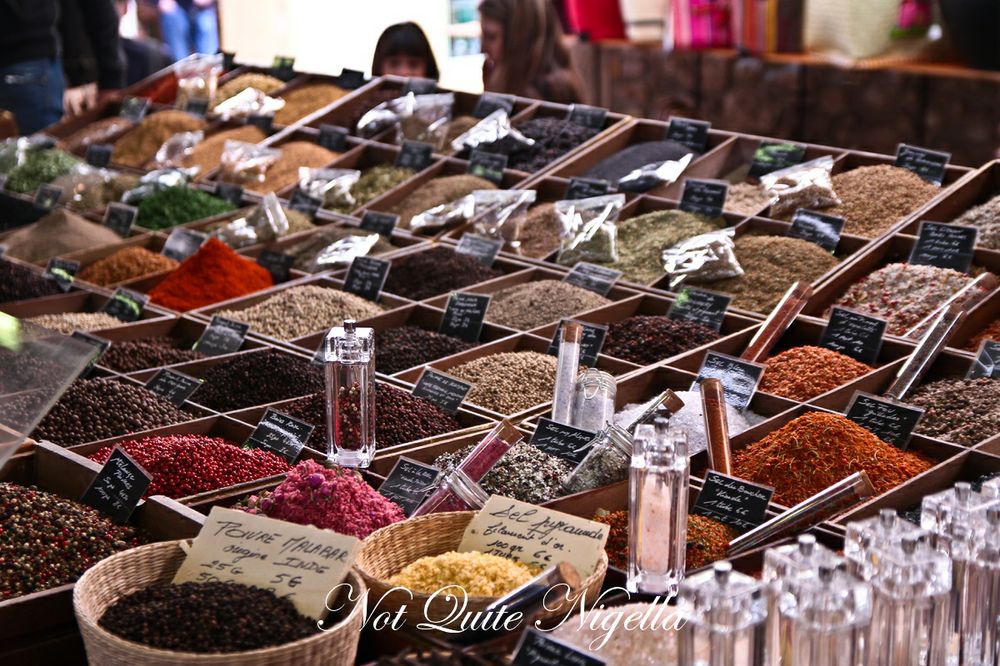 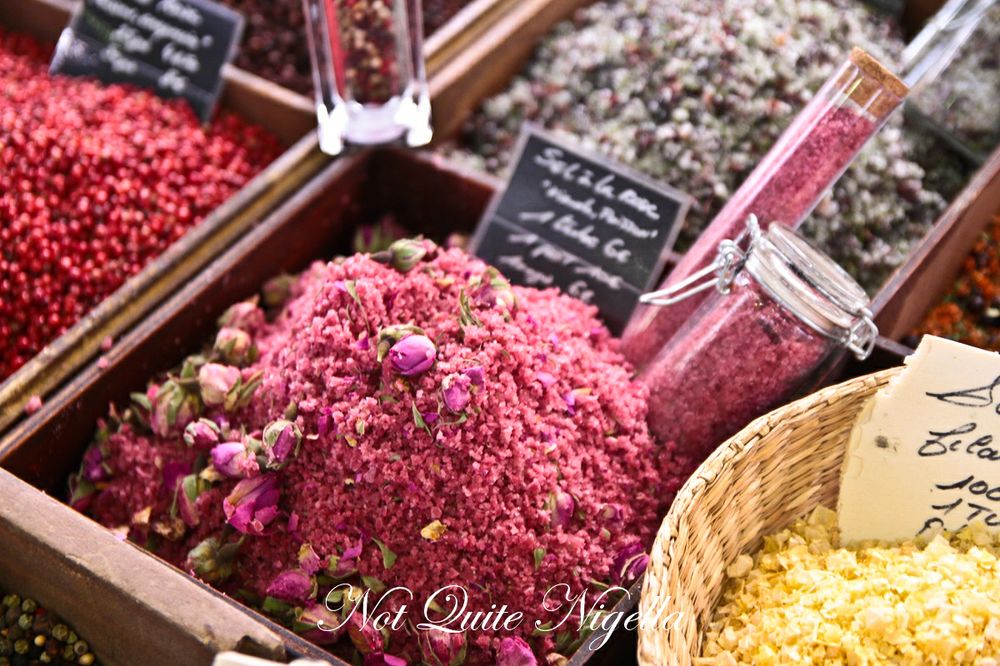 One of the most fascinating stands is the spice stand that has a wonderful range of spices, slightly different from what you might see. Rose salt is one of the items that is a little different and I swoon at its beautiful hue. 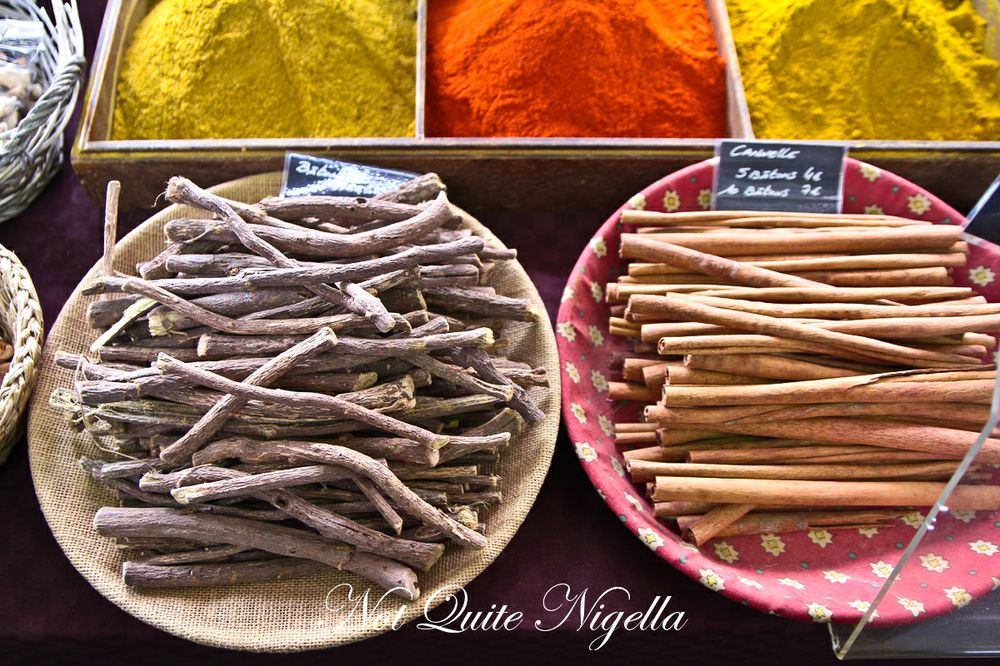 Dried licorice sticks that look like little branches which you chew! 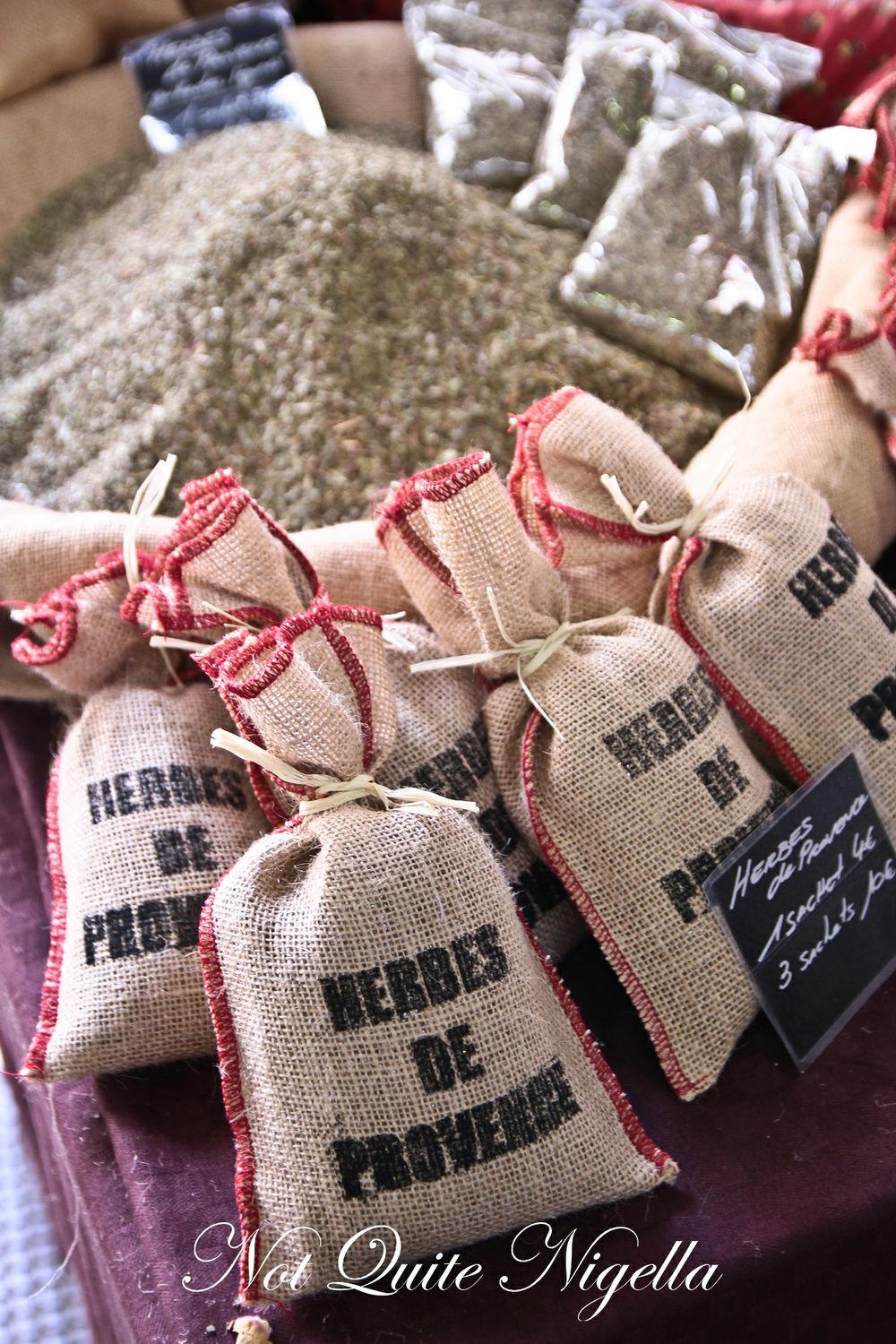 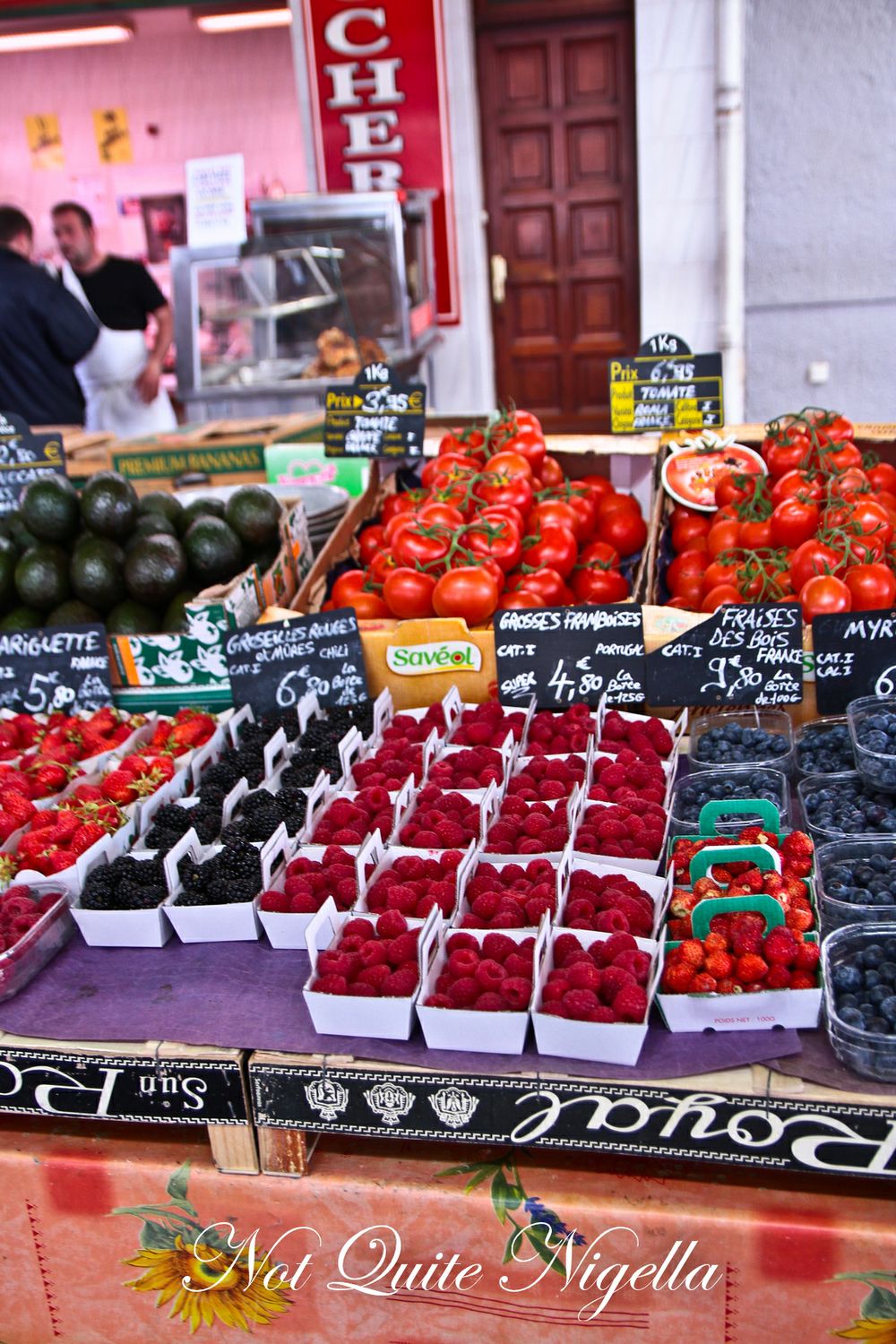 Adjacent to the market is an Absinthe bar where the ground level looks like a regular store but you take the stairs to the basement to the Absinthe bar. Walk past the old signs which were supposed to warn patrons of the danger of Absinthe or anything that wasn't wine, beer or cider. Near one wall sits a table and chairs where a well once sat and pretty decorated tables hold the instruments necessary for chasing the green fairy. 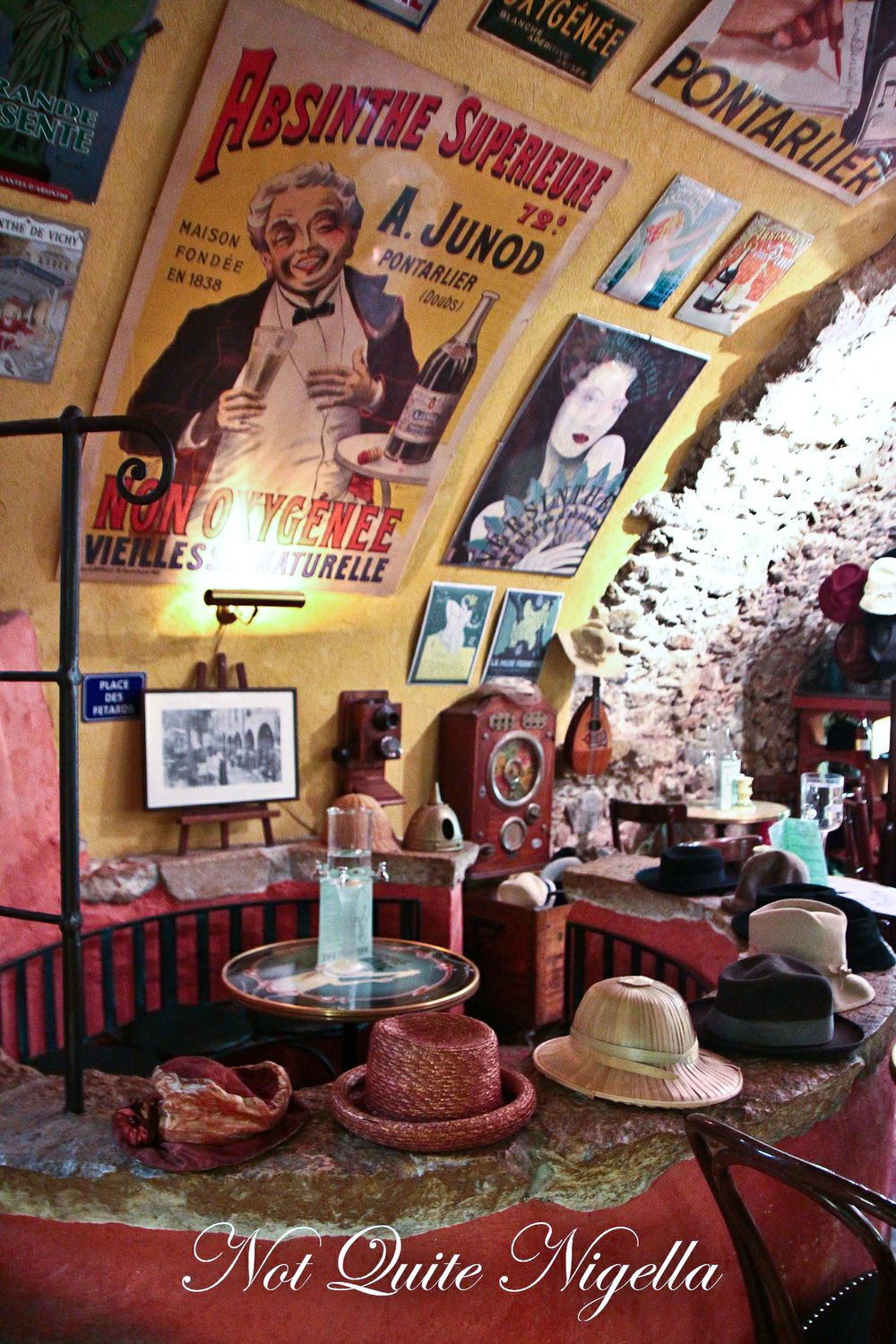 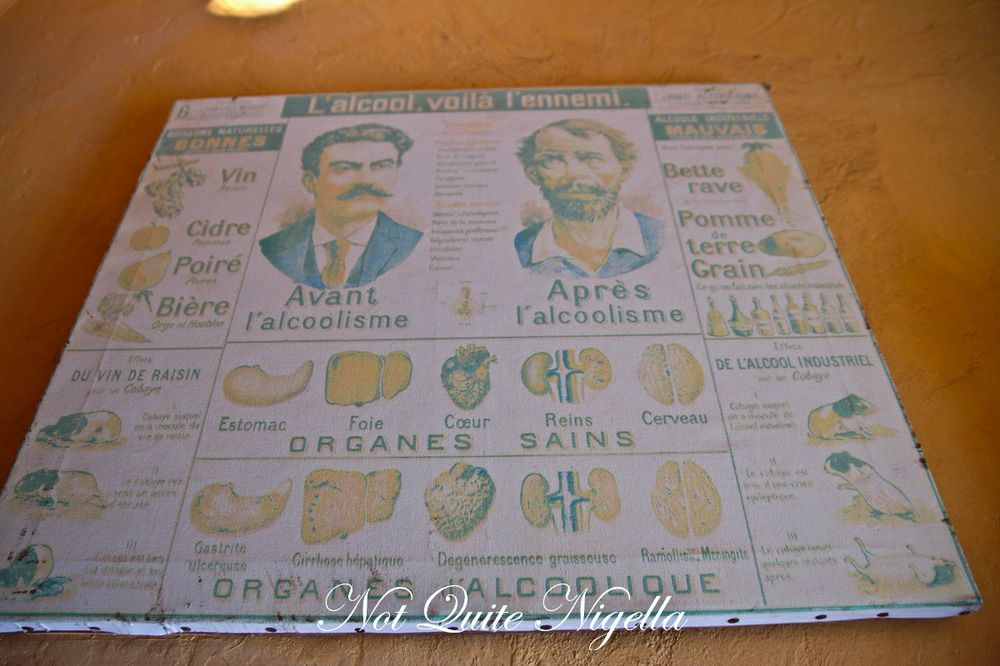 We stayed right along the painter's trail at the Hotel Royal Antibes which is a minimalist hotel on the water. Admittedly the stay wasn't off to a great start. There was no porter and my first room smelled of cigarette smoke even though it was on a non smoking floor. A call down to reception yielded apologies but it was only when I asked to change rooms that I was moved to another room. 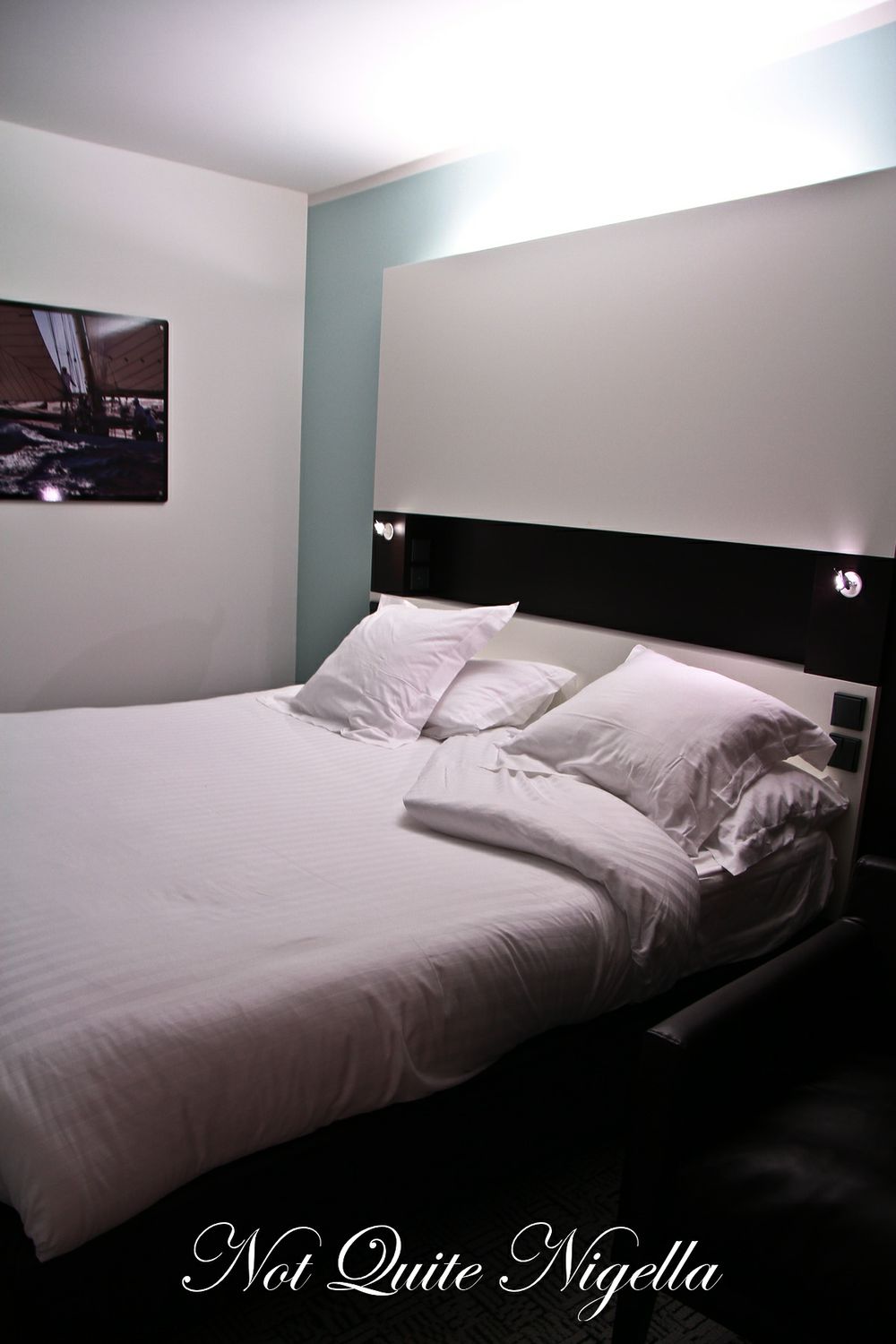 The rooms here are distractingly minialist. I don't mind minimalist but they do need to be functional. The shower head has nowhere to hang it so if you want to shower, you need to juggle the tall thin bottles and coax out product while holding the small shower head. Also the glass panel on the shower is not wide enough to stop water getting all over the floor. There is no shower cap and there is a beauty set that sits in the shower which I didn't see until I got into the shower after I had taken my make up off. The original room didn't have any tissues and these had to be ordered from house keeping. 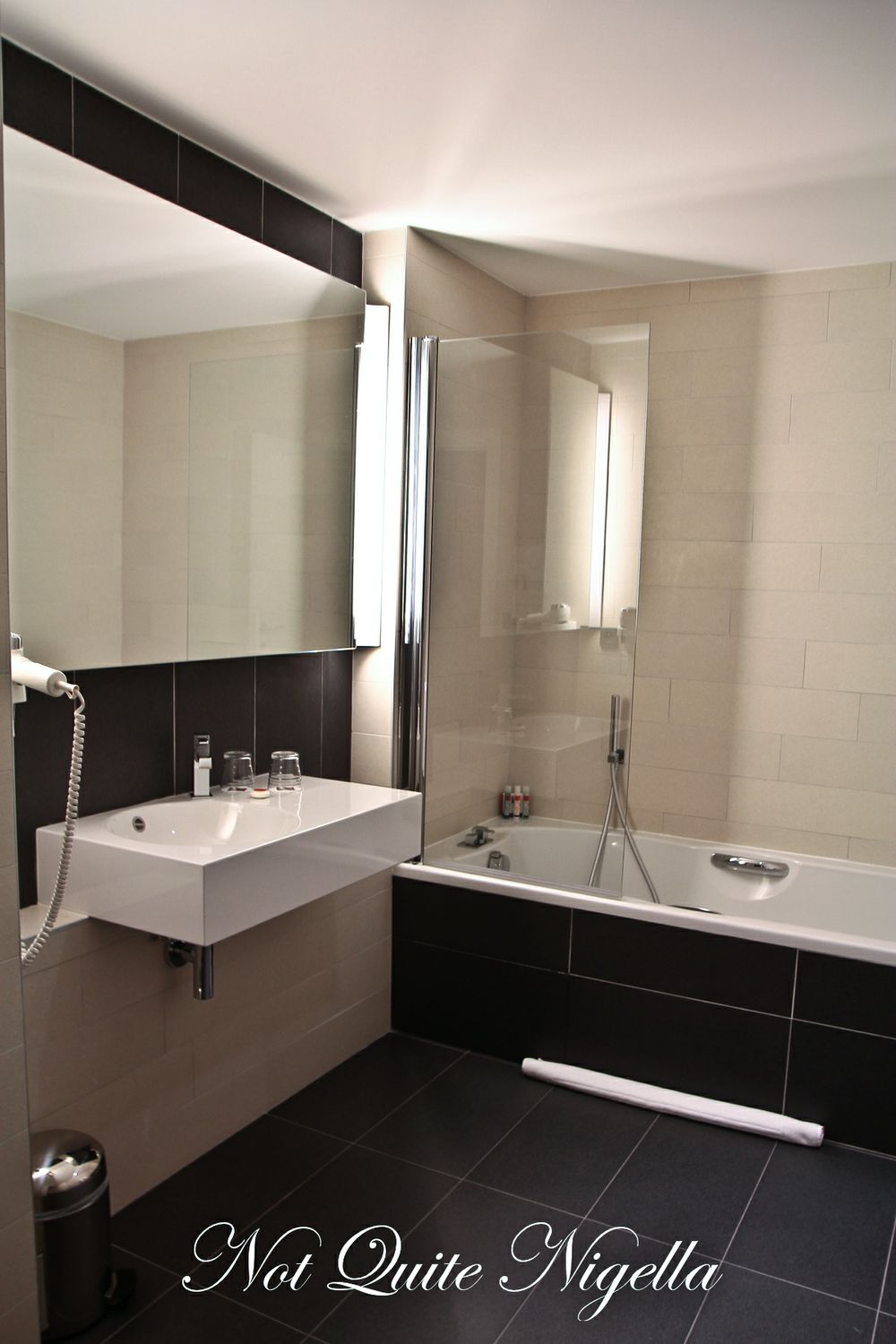 Pluses are the rooms are clean and new and the beds with plush sheets and pillows are very, very comfortable. There are robes and slippers in the suite (although not in the original room). There is also a power point at the head of the bed within easy access and a shelf on which to place things. There is a spacious verandah although the fifth and top floor doesn't quite stretch over the facing building. 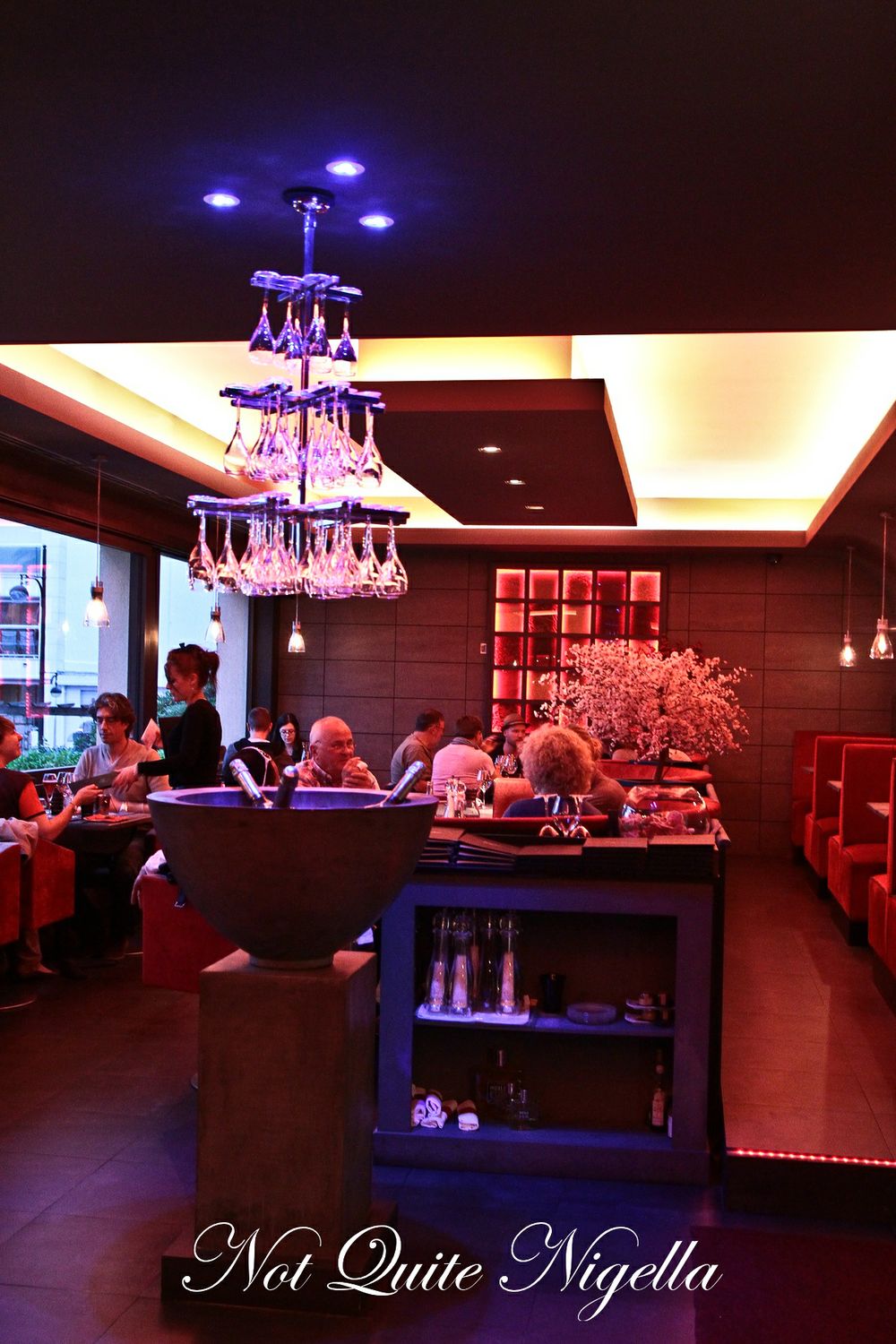 We depart for dinner at nearby Bastion named after the fort of the same name. The room is certainly striking with plenty of lights and deep, velvety reds and cherry blossoms. Pride of place is the open kitchen which is somewhat of a rarity in France (in fact these are called Cuisine Américain or American kitchens). The menu has items from all over the world and there are items from Bulgaria, France, Belgium and Italy with a distinct lean towards Asian and Asian fusion dishes. 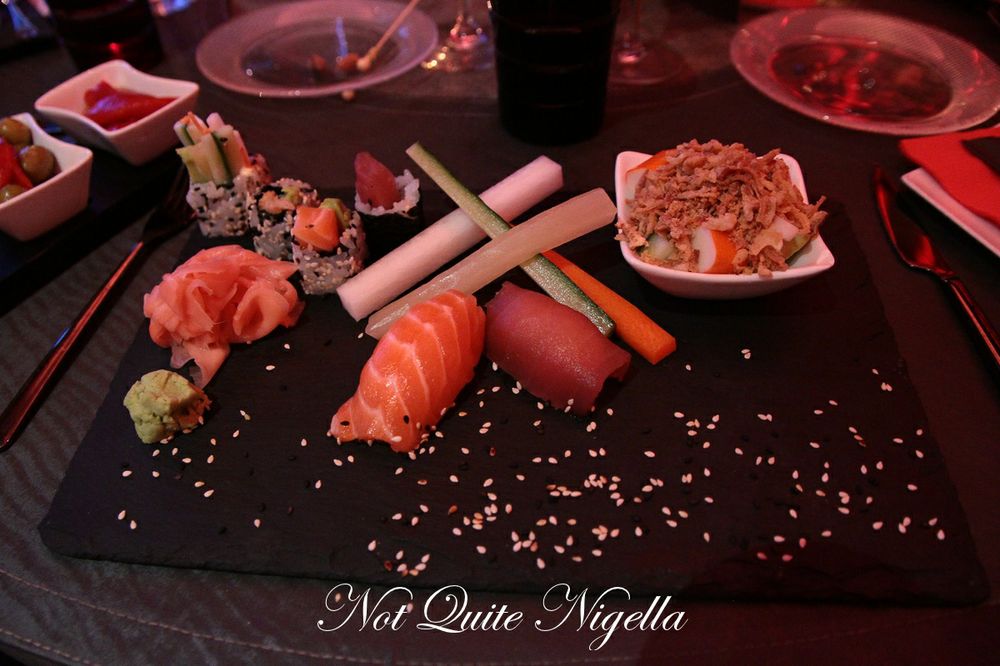 The sushi and maki selection is made up of tuna and salmon nigiri, a few types of maki and a perplexing small bowl with a piece of maki topped with crab stick, cucumber and topped with fried shallots. It was quite odd and perhaps I shouldn't have ordered sushi. 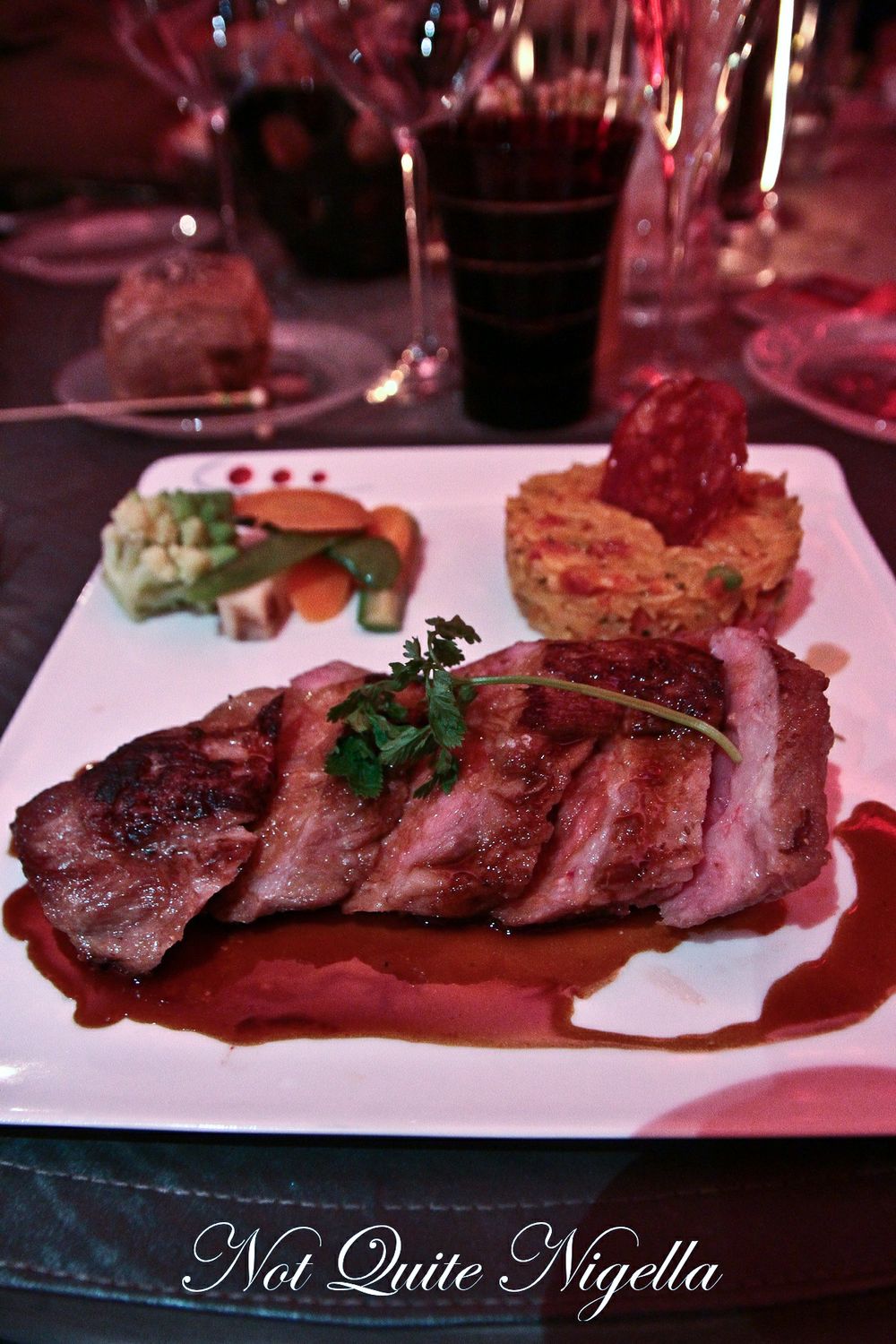 The madrid was delicious though and made up of tender slices of black pig with a round of paella made with risoni and studded with pieces of chorizo, onion and capsicum. 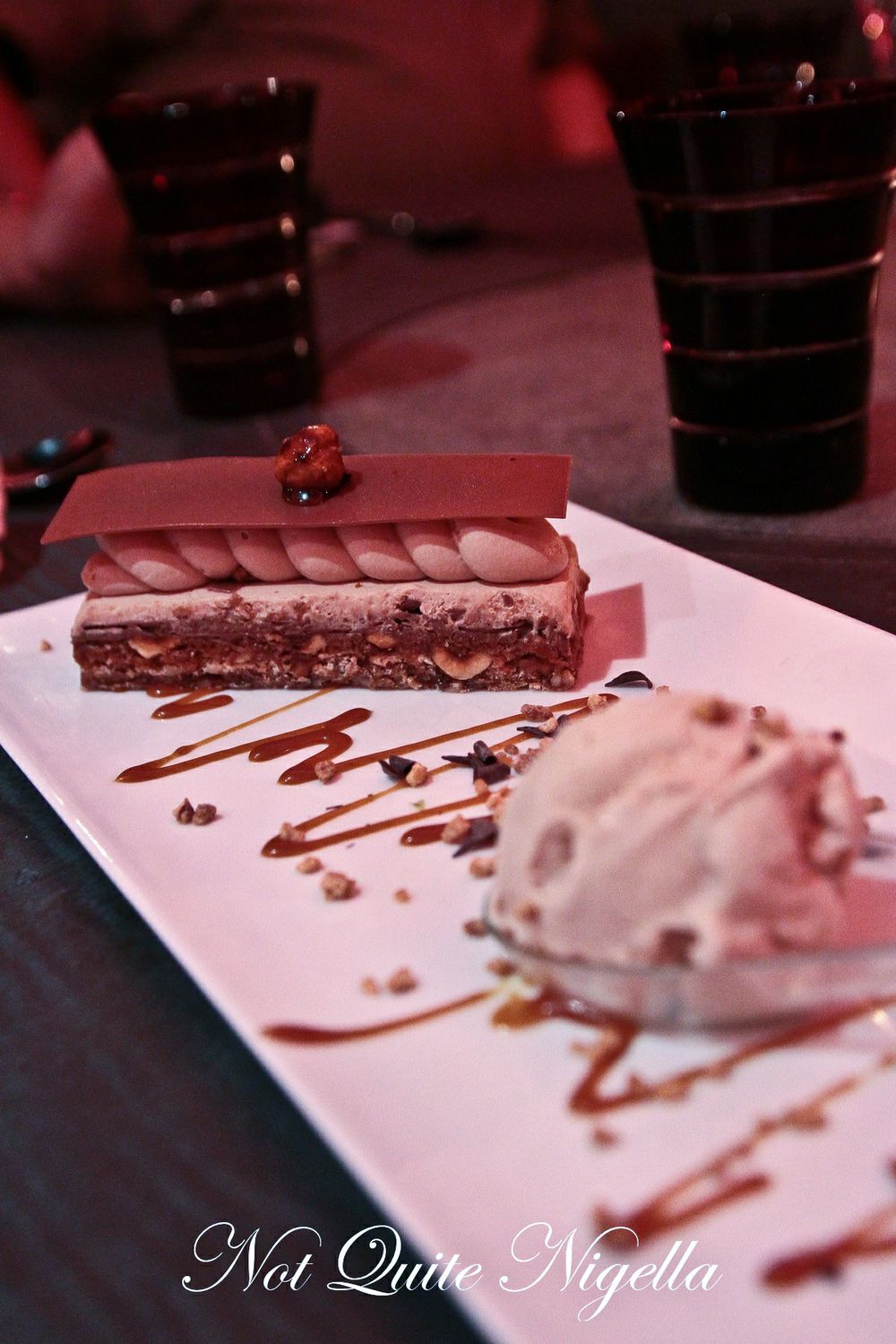 Now how do you sell dessert to people that are full? Well you bring a tray of glistening, delicious looking desserts, watch their mouths water and order one of each. The milk chocolate and hazelnut is a slender rectangle of milk chocolate mousse on top of layers of chocolate sponge, chopped hazelnuts and feuilletine to give it a lovely crunch. A paper thin layer of milk chocolate sits on the very top. Art on a plate!

So tell me Dear Reader, do you like going to visit art galleries and museums when you travel? 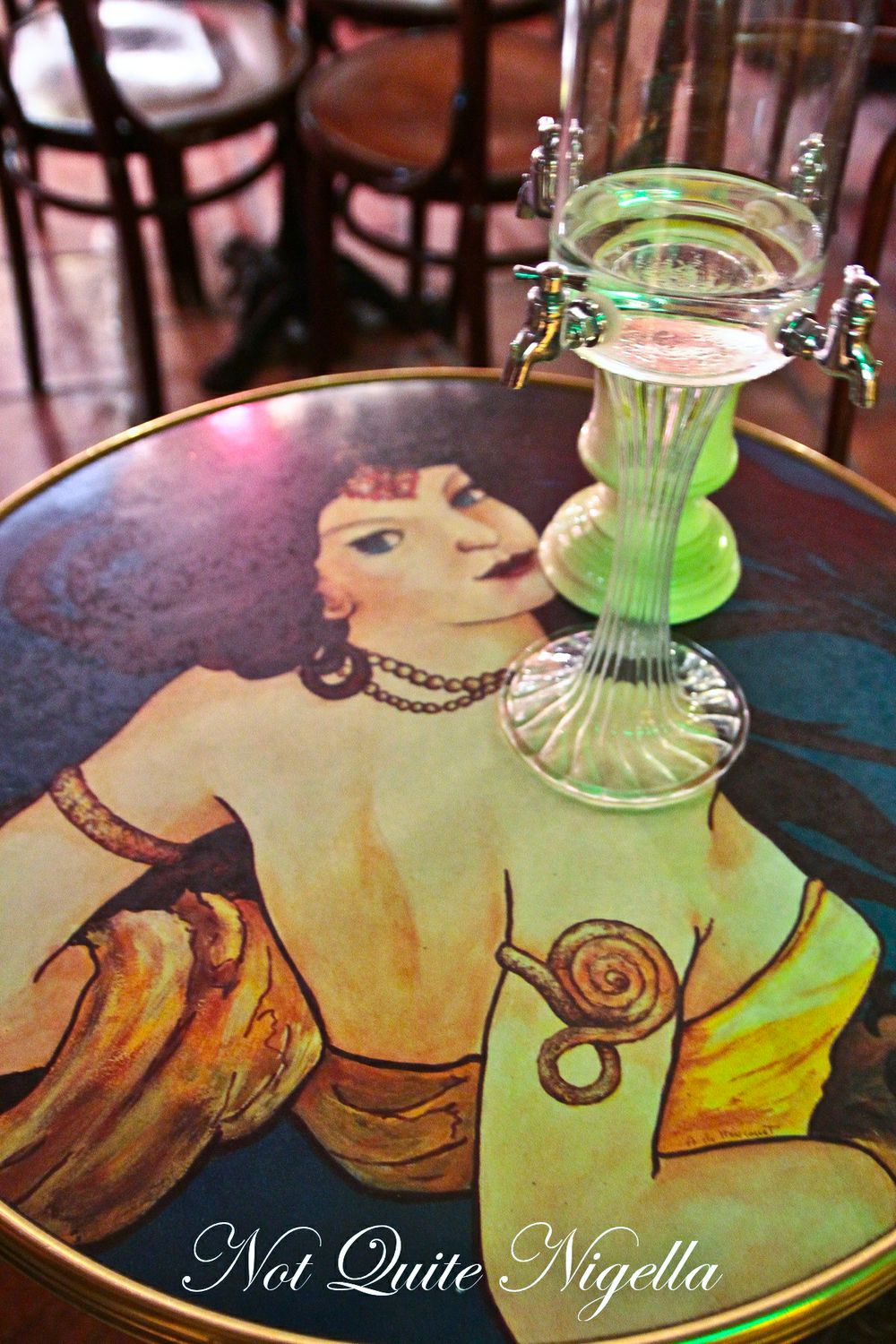 NQN travelled as a guest of Rail Europe.

Rail Europe is the exclusive distributor of the France Rail Pass in the world. www.raileurope.com.au