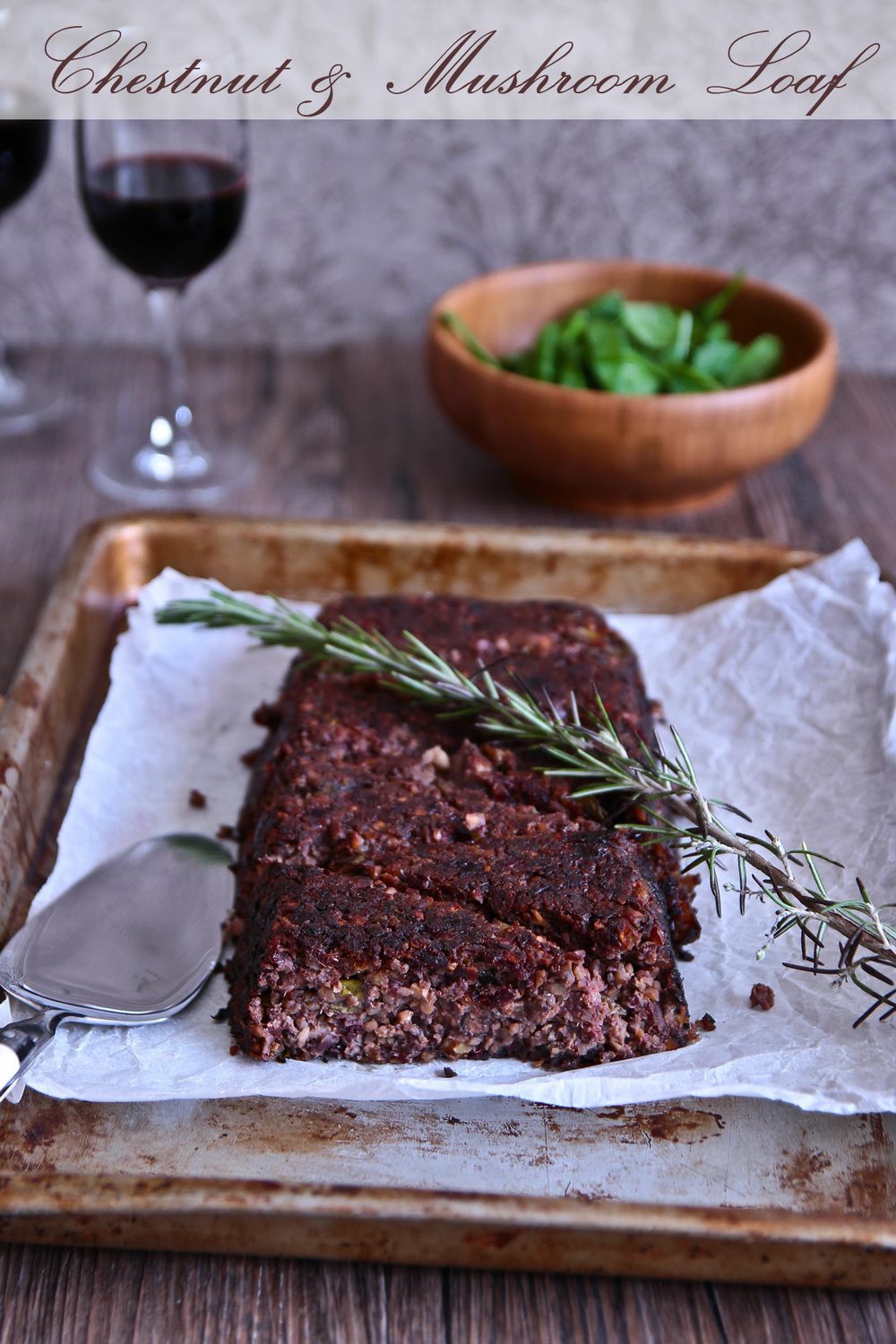 Way back when I worked in an office, I would meet the most interesting people in the break room. I was chatting to one of my colleagues, Gareth, and he mentioned how always woke up a bit worse for wear after going out for a drink and then raised his eyebrows in an expression that told me that there might be more to the story, if I cared to ask. I of course enquired and it turned out that when he lived in Melbourne, he had gone out drinking and a couple of days later, he woke up in Tasmania. And he liked it there so he decided to stay there for two years! His boyfriend who also worked there nodded and confirmed his story while I sat there open mouthed stirring my tea.

Even more bizarre was another tale of his, also involving drinking and waking up two days later (a recurring theme, it would seem). Gareth used to live opposite a Chinese butchers. It scared him somewhat as some days there would be a cow's head in the window, which he found disconcerting and just a little bit creepy. As the story went, one night he consumed much alcohol and woke up a couple of days later, not in another state but in his own bed. Startlingly, he saw a large brown paper bag by the side of the bed and a cow's head inside it. And at this point in the story, he paused for dramatic effect.

"The worst thing was that when I looked closer at the cow's head, I could see that there were bits that were eaten from it!"

I think he cleared the entire break room with that tale and some of us turned a little vegetarian that day. 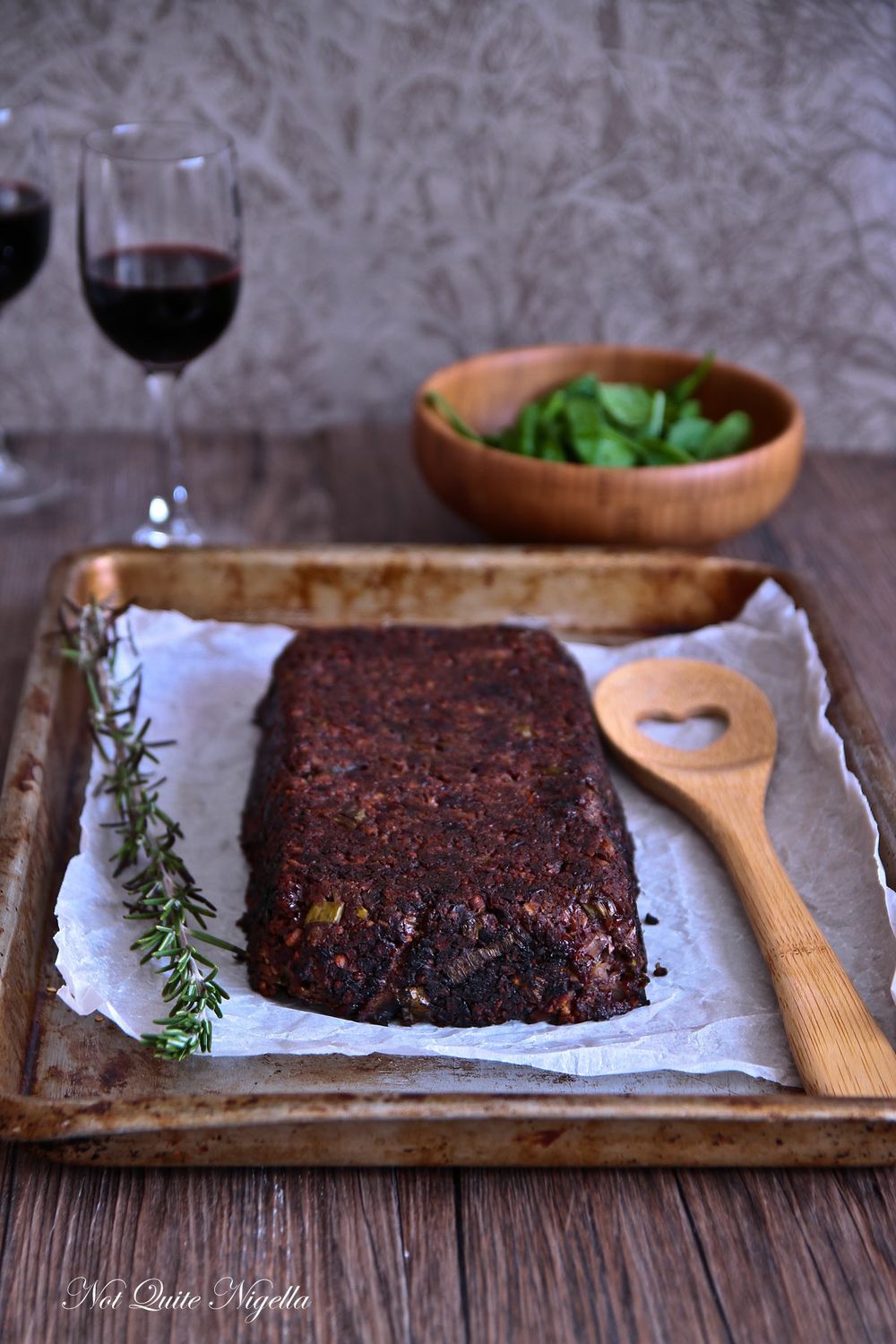 As you may know, I married into a family of vegetarians, Mr NQN being the only non vegetarian in his family. As much as I enjoy eating meat, I also enjoy eating vegetarian dishes a couple of times a week and it was when we were having a family dinner that I spoke to Mr NQN's sister Araluen's partner The Banksia Man. He is an omnivore but looks for vegetarian recipes when preparing meals for Araluen and himself. He told me about a recipe for chestnut and mushroom nut loaf.

A nut loaf is like a meat loaf but without meat and I was instantly interested in getting his recipe for it with its very winter friendly ingredients. There were chestnuts and mushrooms which are everywhere at the moment, as well as a tasty combination of items, some of which I added as I found the original recipe a little too much on the sweet side. You can make this vegan by leaving out the egg and replacing the liquid with milk although there won't be anything that "binds" it together. It doesn't affect the taste though and you just need to be a bit careful when slicing it up and putting it on the plate. Otherwise, I found this to be a delicious way to get vegetables and protein in a diet without the need for cow's heads ;)

So tell me Dear Reader, would you or have you ever toyed with vegetarianism? I was vegetarian for two years when I was a teenager but the smell of bacon lured me back! 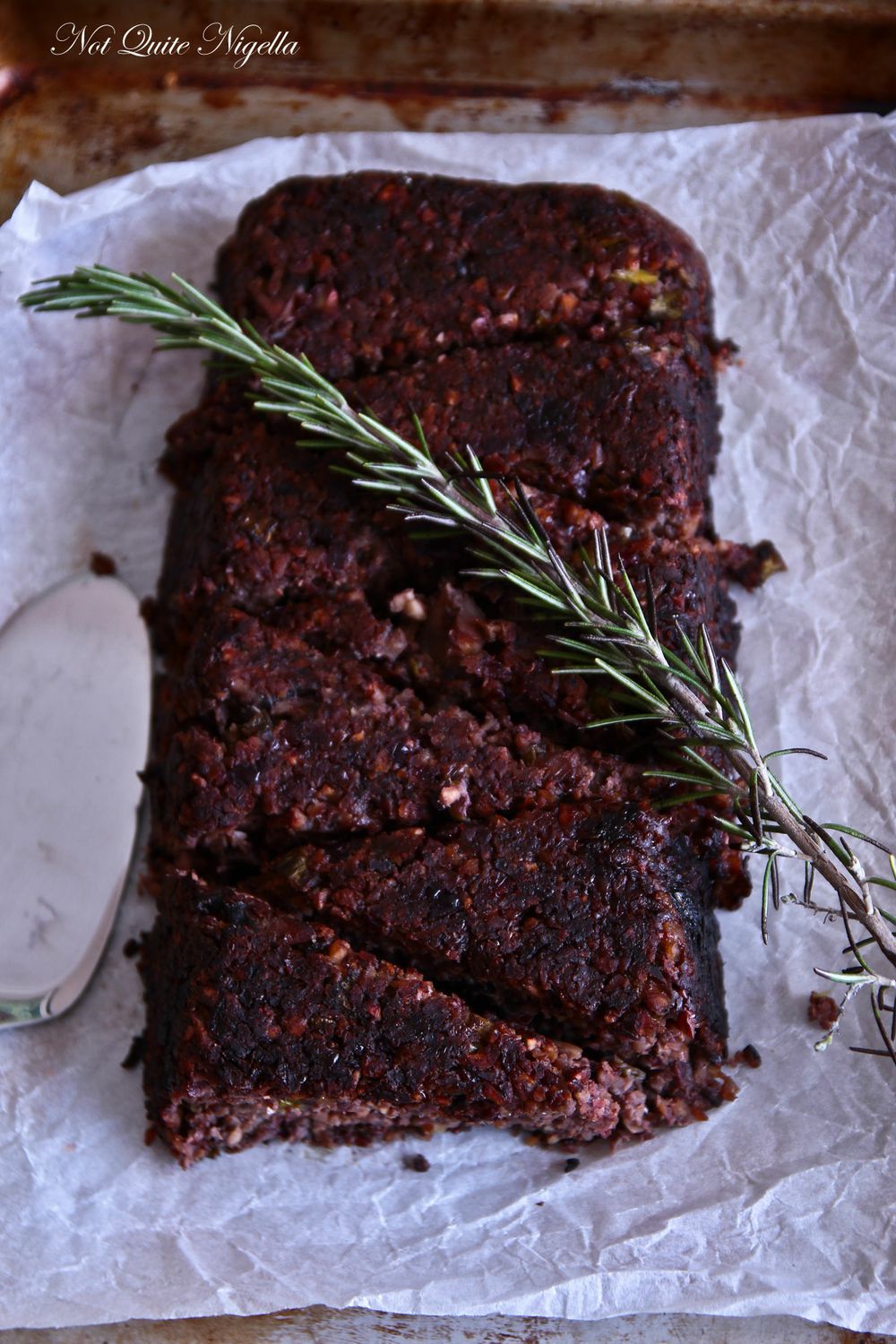 Hint: choose chestnuts that are flat as they will be easier to score. Choose chestnuts that have shiny shells and are heavy for their weight. Do not pick ones that rattle or seem hollow or have little holes in them as this indicates insect activity. 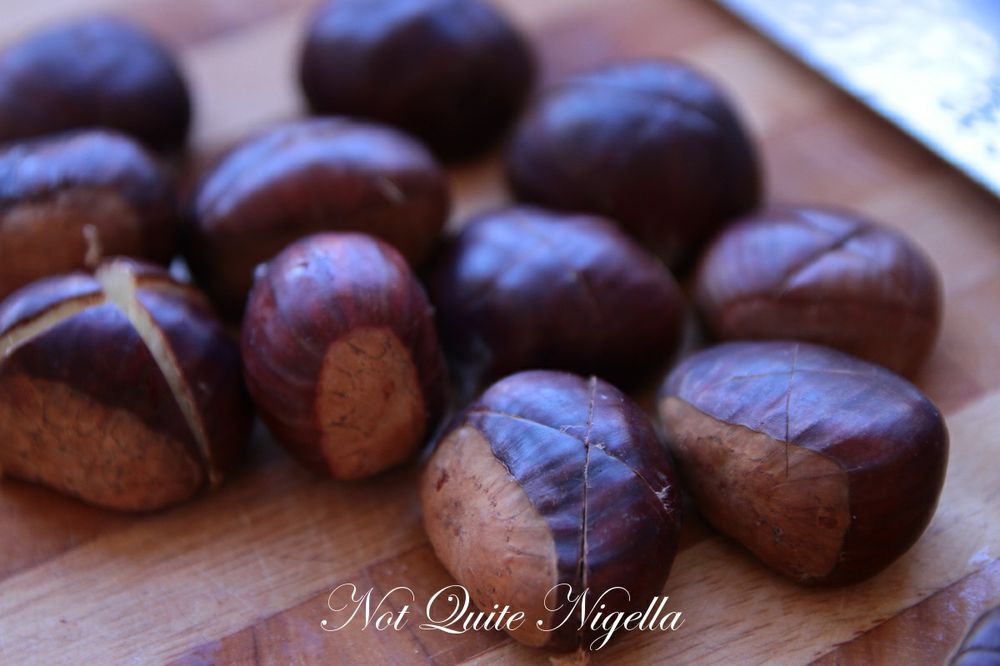 Step 1 - Put a small saucepan of water on to boil. Score chestnuts on top being careful when using a knife on them as they can be slippery. Place the chestnuts in the boiling water and cook for 10-15 minutes. Using a slotted spoon, remove the chestnuts and cool. Remove the hard outer skin. There is also a layer of inner, furry skin that may cling tightly to the yellow meaty interior. If this doesn't come off easily, then place back in water for another few minutes. Don't worry if you can't get all of the furry brown layer off. I couldn't be bothered so I decided to call it "rustic" and be done with it and it tasted just fine ;) 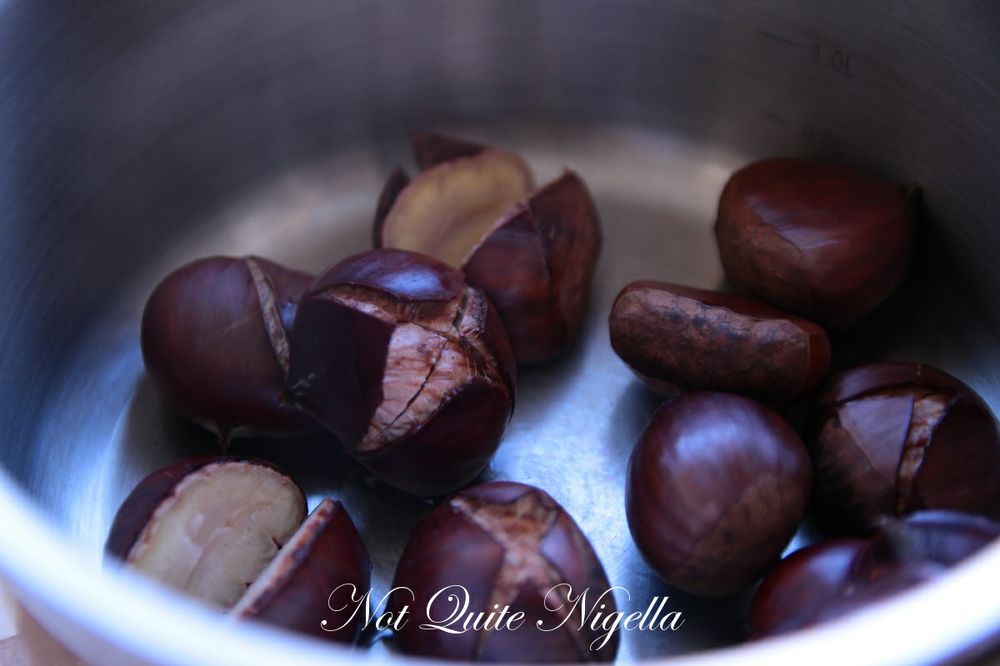 Step 2 - Preheat the oven to 200C/400F. Line a loaf tin with baking parchment. Heat a saucepan on medium and add a tablespoon of oil and saute the onions until fragrant. Then add the garlic and cook for another minute. Set aside in a large bowl. 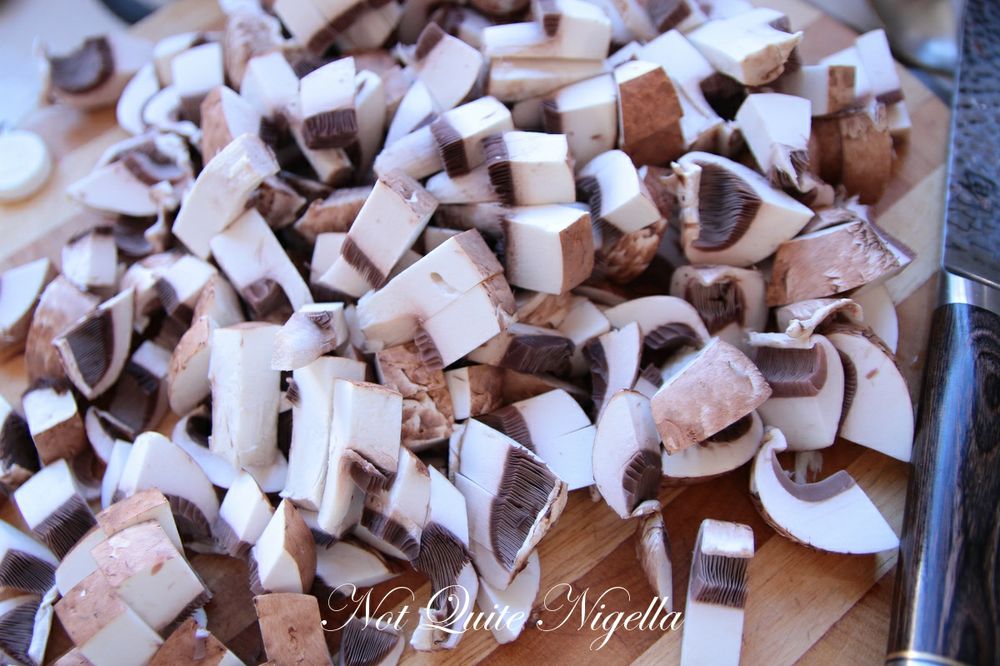 Step 3 - Add 2 more tablespoons of oil to the pan and add the chopped mushrooms and saute until cooked, stirring for about 10 minutes. Take out one quarter of the mushroom mix and add it to the onion mix. Put the remainder of the mushrooms into a food processor along with the cranberries, hazelnuts, egg, sage leaves, Worcestershire sauce, breadcrumbs, chestnuts and green spring onion and process until it comes together. Stir with the onion and mushroom mix until thoroughly combined. 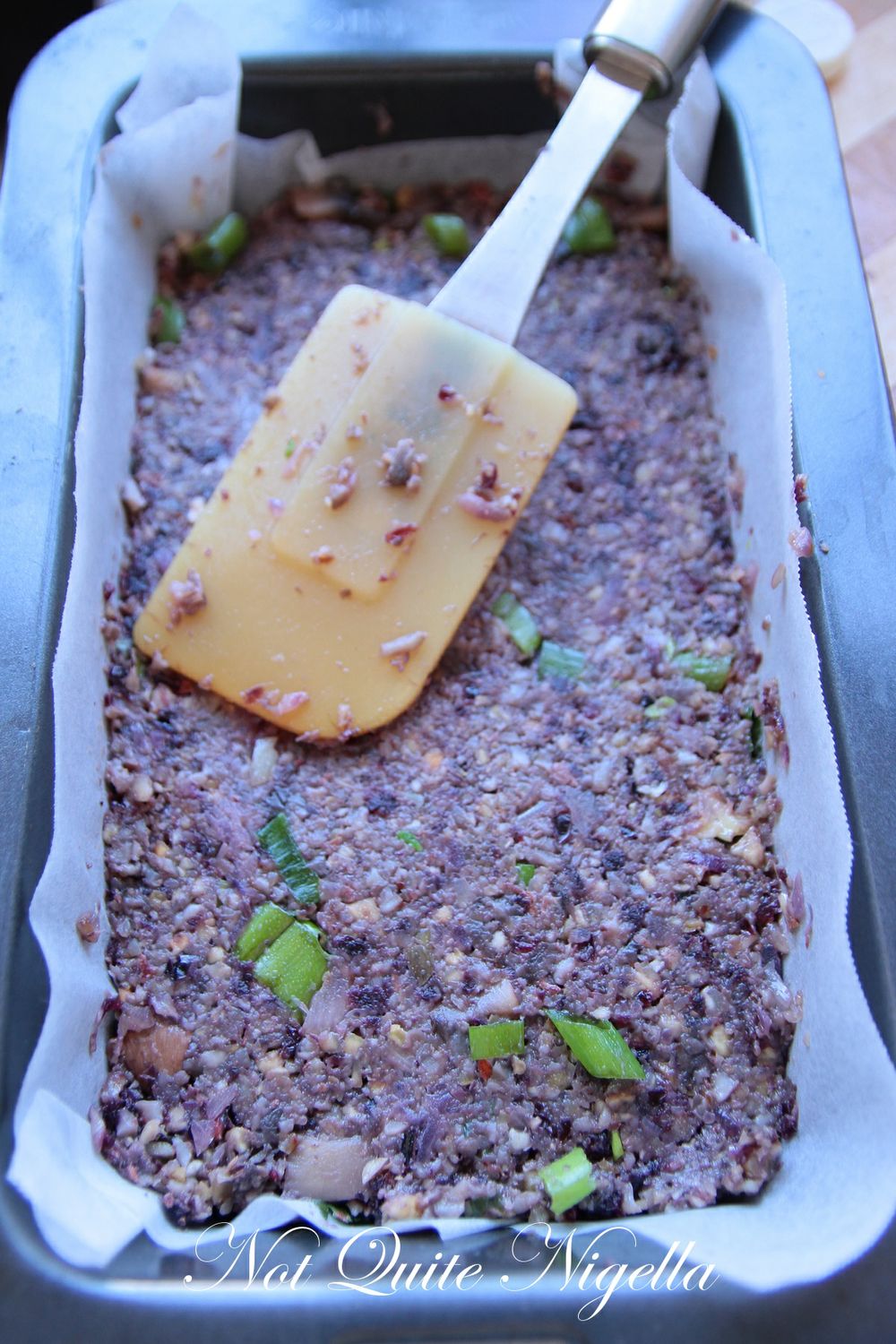 Step 4 - Place in the prepared loaf tin and smooth down the top with a spatula. Cover with foil and bake for 25 minutes, then remove foil and bake for another 10 minutes. Allow to cool and serve with a salad or mashed potato or celeriac puree. *If egg free, it is best to serve this lukewarm or cold as the egg helps to bind it together. It holds together quite well when it is cold but not so much when it is hot.