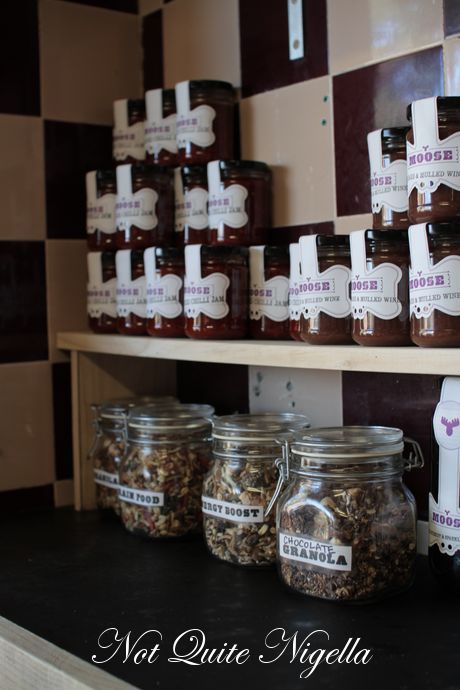 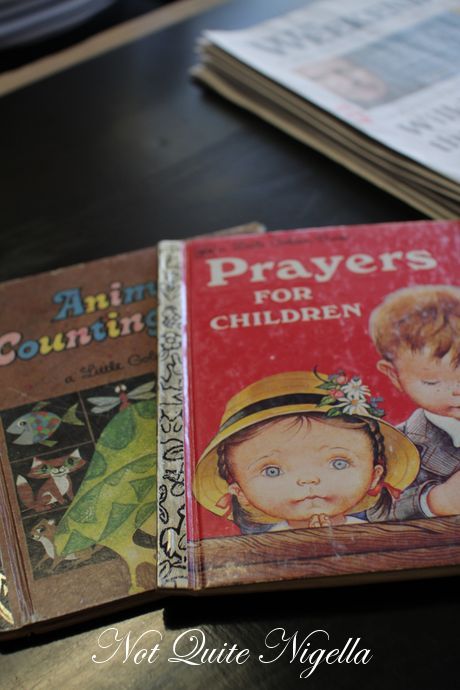 It has been at least 20 years since I was handed a Golden Book to read - I might even venture to say over _30 years _since that has happened. But at Moose Cafe in Redfern, a Golden Book titled Prayers for Children no less, is what I am handed when they offer me the menu. I'm meeting M this afternoon for lunch. Outside Moose Cafe is on a quiet-ish side street but this doesn't stop it from being constantly patronised with customers (mostly locals). 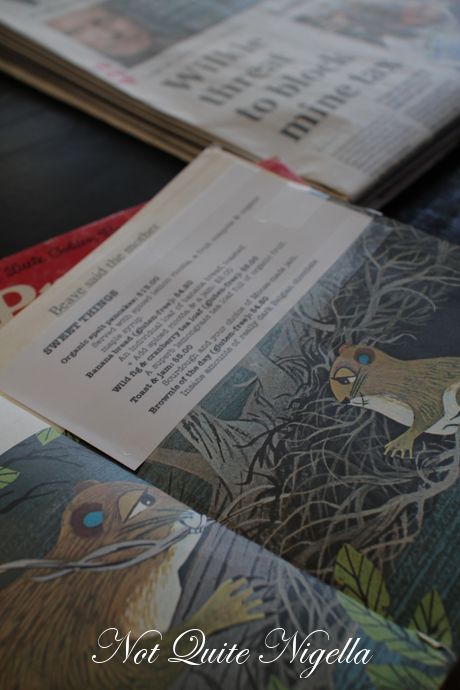 Owner Charbel is an former colleague of M's. He is in fact an Information Architect who currently works three days in that end of the world and the rest in the warmer and fuzzier world of home made mueslis and jams. Did I mention the jams? No? Well on the wall there is a huge wall of them, all very nicely packaged indeed. There are two prices: "sober" $8.50 and "drunk" $9.50 and when you see the flavours you'll understand why. They're very grown up jams. 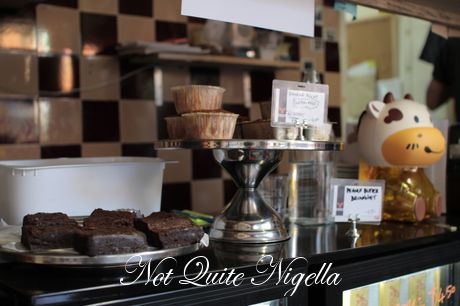 There are fancy schmancy flavours like rhubarb & mulled wine; strawberry & Earl Grey;  blackberry & sparkling shiraz and the most popular flavour gin & tonic marmalade (but more on that later ;) ). They also come for the coffee, a brand called The Golden Cobra which is a coffee brand with a sense of humour. The Golden Cobra's decaf blend is called the "Timothy Dalton" blend aka the slightly "lame James Bond". 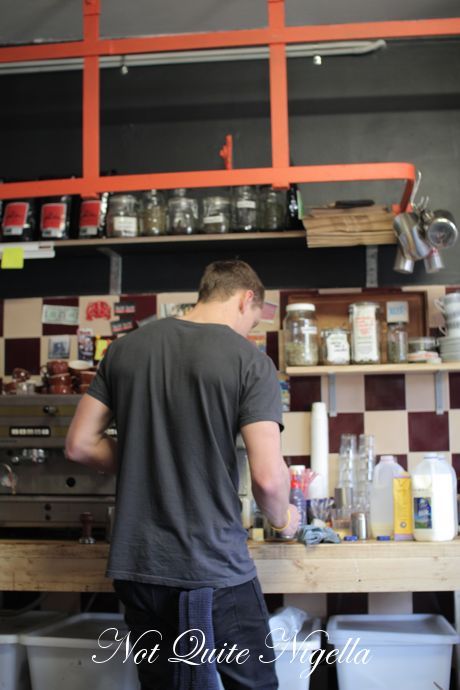 There are also a display of granolas including their best selling Belgian chocolate granola. Eat in prices start low at $4.50 with a gluten free banana bread (there are a few gluten free baked choices here) and the prices hover around the $10-$14 mark. Housed in a former butcher's shop there are still remnants of the earlier institution, most notably the enormous cool room and the painted over meat hook rails. Service is friendly and sweet and without a trace of attitude and the excellent coffee is delivered by the barista with a big smile. 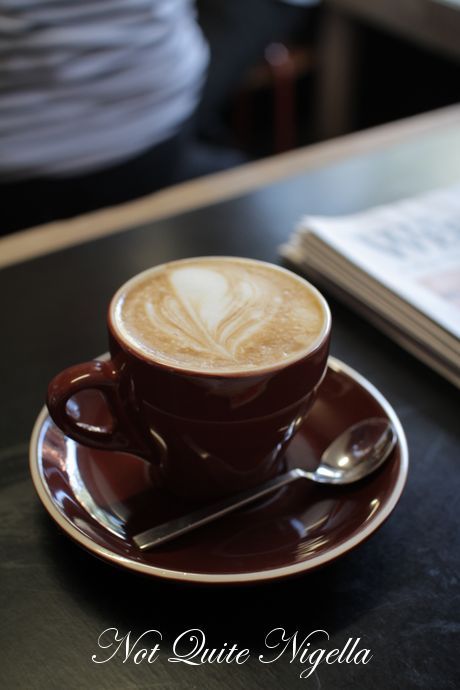 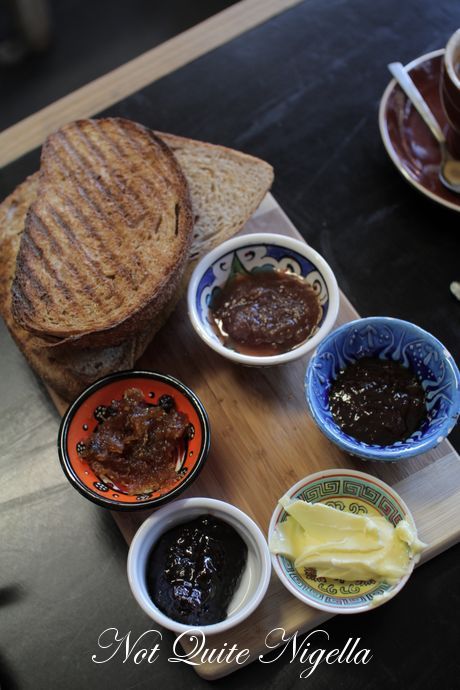 We start with three huge slices of toast and an assortment of jams. We try the rhubarb and mulled wine, the blackberry and sparkling shiraz, the strawberry and Earl Grey and the G&T marmalade. It's hard to choose a favourite but the G&T marmalade has got to win on flavour and fabulousity value-I mean this is a socially acceptable way to have a G&T at breakfast. And I am not even a gin & tonic girl! 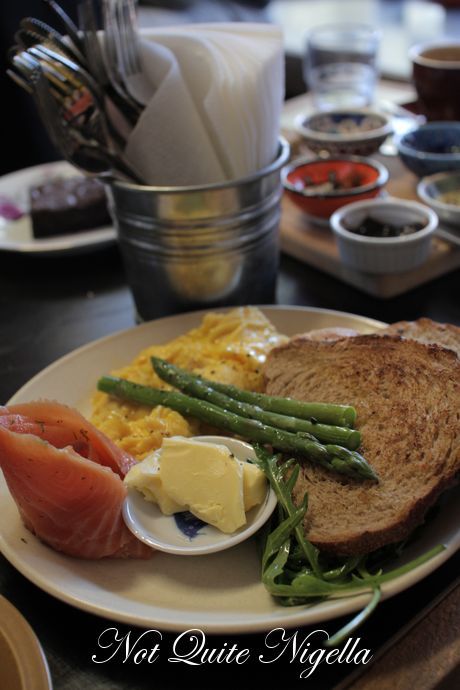 We then choose from the "Hello Breakfast" menu-the new Spring menu has started this weekend and already the Gravlax Smoked Salmon is apparently a hit and it is laced with prized gin (they do like their gin here it seems). The eggs are buttery and it comes with two thick slices of the Infinity toast, three spears of asparagus, a dressed rocket salad and a flower of drunken gravlax smoked salmon which is lovely and fresh-and not too heavy on the gin for those of you that are worried about that element. M likes it so much that when I offer her a taste of my breakfast, she helps herself to more than half of it! 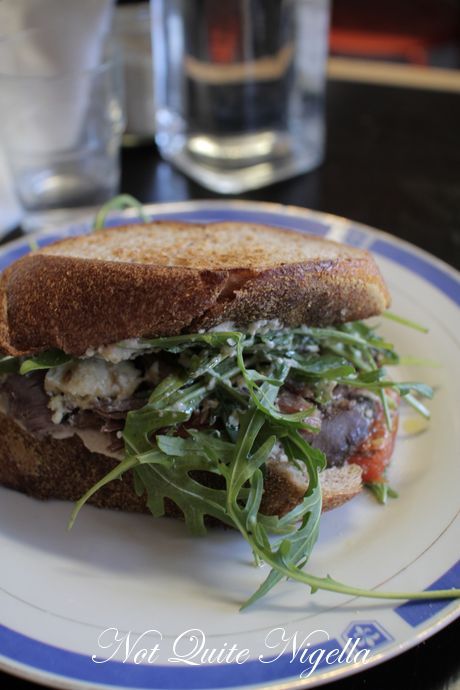 I dither about with the sandwich selections. There is "The Whole Hog" which features Bok's free range bacon, Esk River free range sausage, an Egganic egg, cheddar and the trimmings but I'm convinced by Charbel that the Bultarra Saltbush lamb sandwich is the go. The lamb is slow roasted for 16 hours and comes with a spiced Moose feta, baba ganoush, tomato and rocket. The lamb is tender and complemented well with the rocket, feta and tomato. It's too big so I eat it at home and add a little of the spiced chilli jam that I bought to it and sink back into the couch in a blissful state. 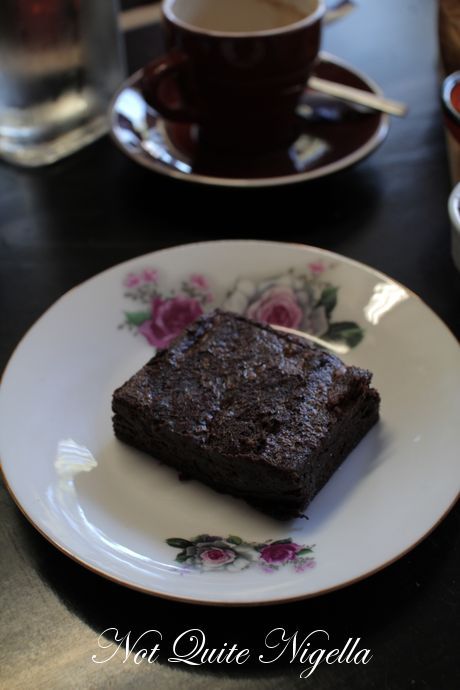 The chocolate brownie is richer than rich and very gooey indeed. Described on the menu as "insane amounts of really dark Belgian chocolate", you can really taste the bittersweet chocolate in this. The peanut butter element is swirled through so that one bite will get you a strong peanut butter hit while the other a milder hit. 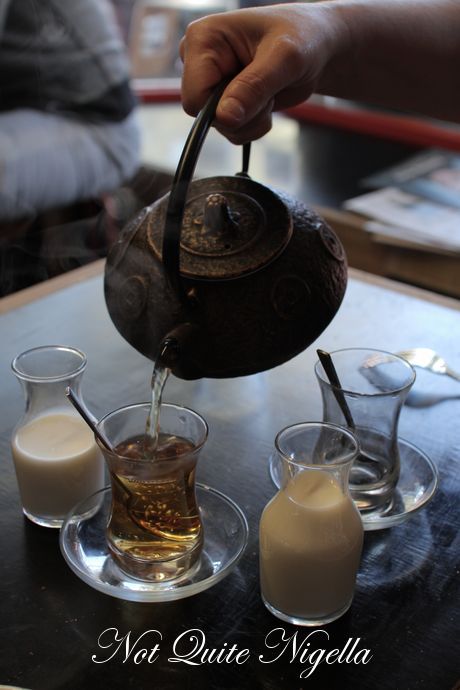 We try the Earl Grey tea which is served in these fantastic Turkish tea glasses. We also try a sample of the chocolate granola and the regular granola. Both granolas are toasted and are both good although I love the cinnamon aroma of the regular granola and the chunkiness of the nuts in it. Reem tried the chocolate granola for breakfast recently with some yogurt and blackberry shiraz jam. They have also started doing bespoke muesli orders where you can customise the type of muesli that you want. Our lunch is over around 3:30pm but they are in no rush to push us out. I buy three of the jams to take with me for gifts and I bring Mr NQN the lamb sandwich (minus some bites ;) ).

So tell me Dear Reader, what is your current  favourite jam flavour? And do you remember Golden Books? 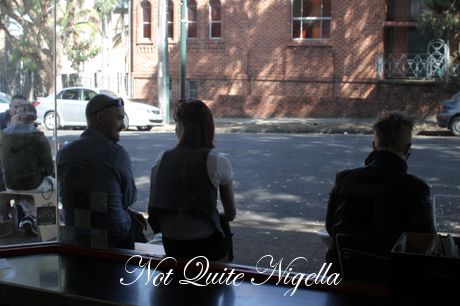 Sadly, due to a complaint, the Moose Cafe has closed. They are still selling mueslis and jams. Check out www.moose.com.au for further announcements.

Thursday to Saturday 8am to 3pm

Sunday 8am to 2pm 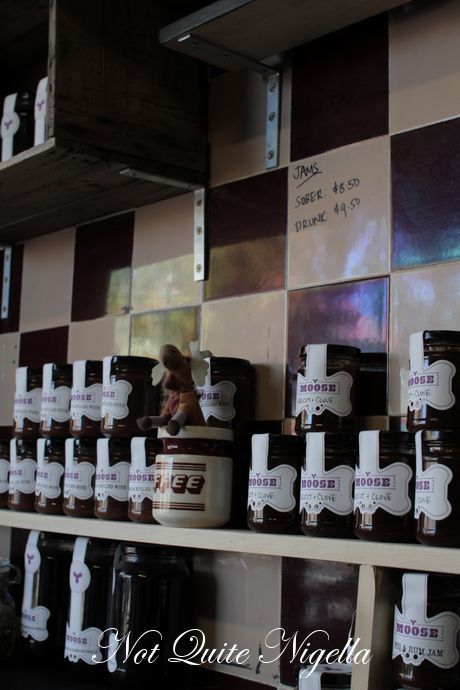 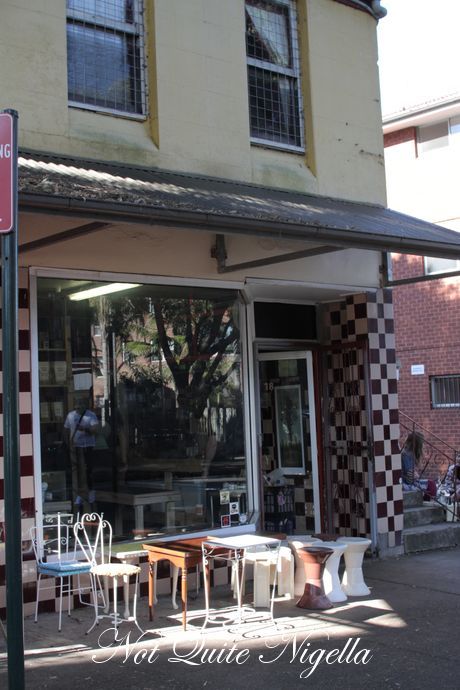