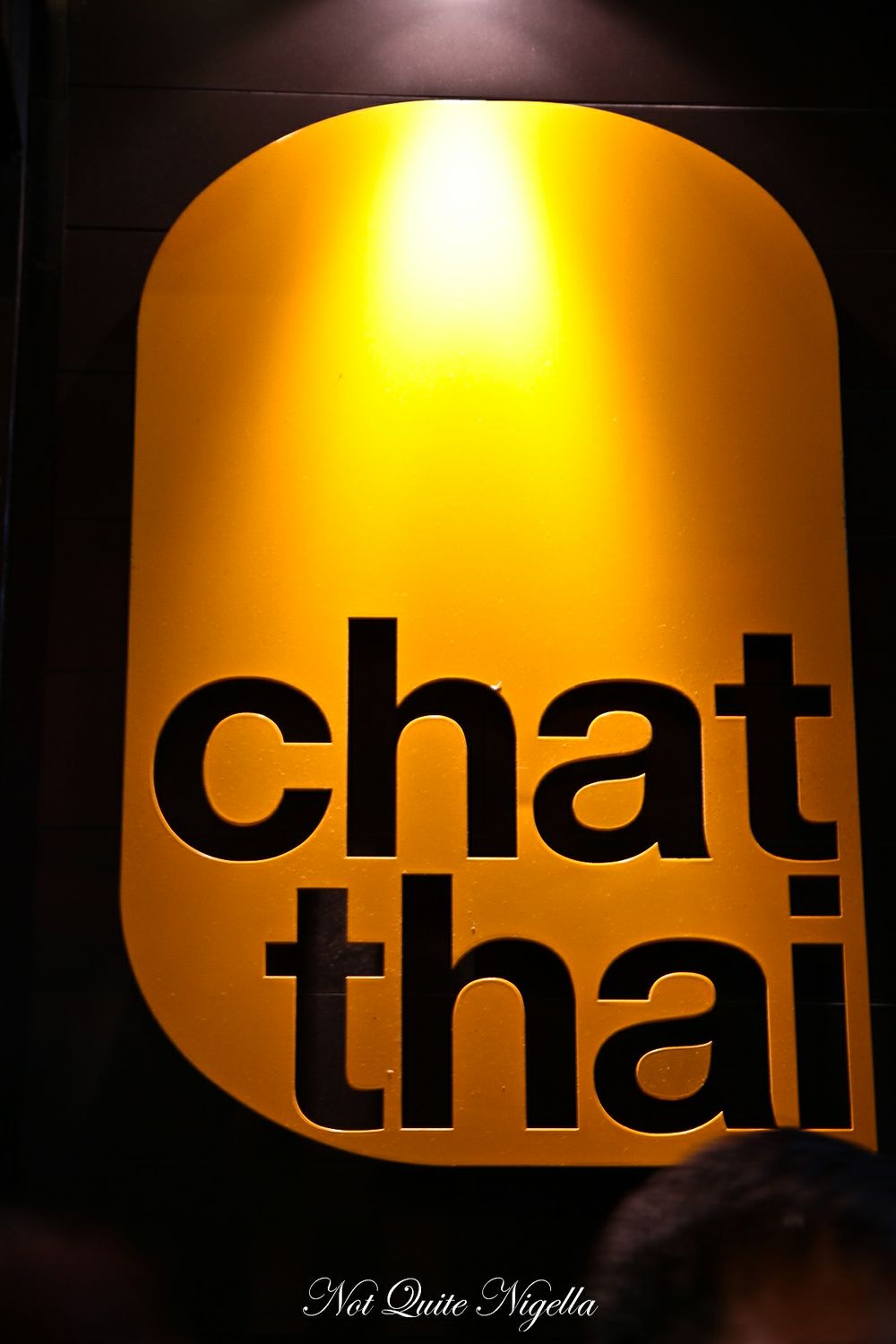 "They're going to spank us" Ute says whispering. She elaborates, "we're in trouble, they wrote 'late' next to our name. I even argued with the woman over the location as I walked around and around the street as it used to be on the other side of the road!" she said. 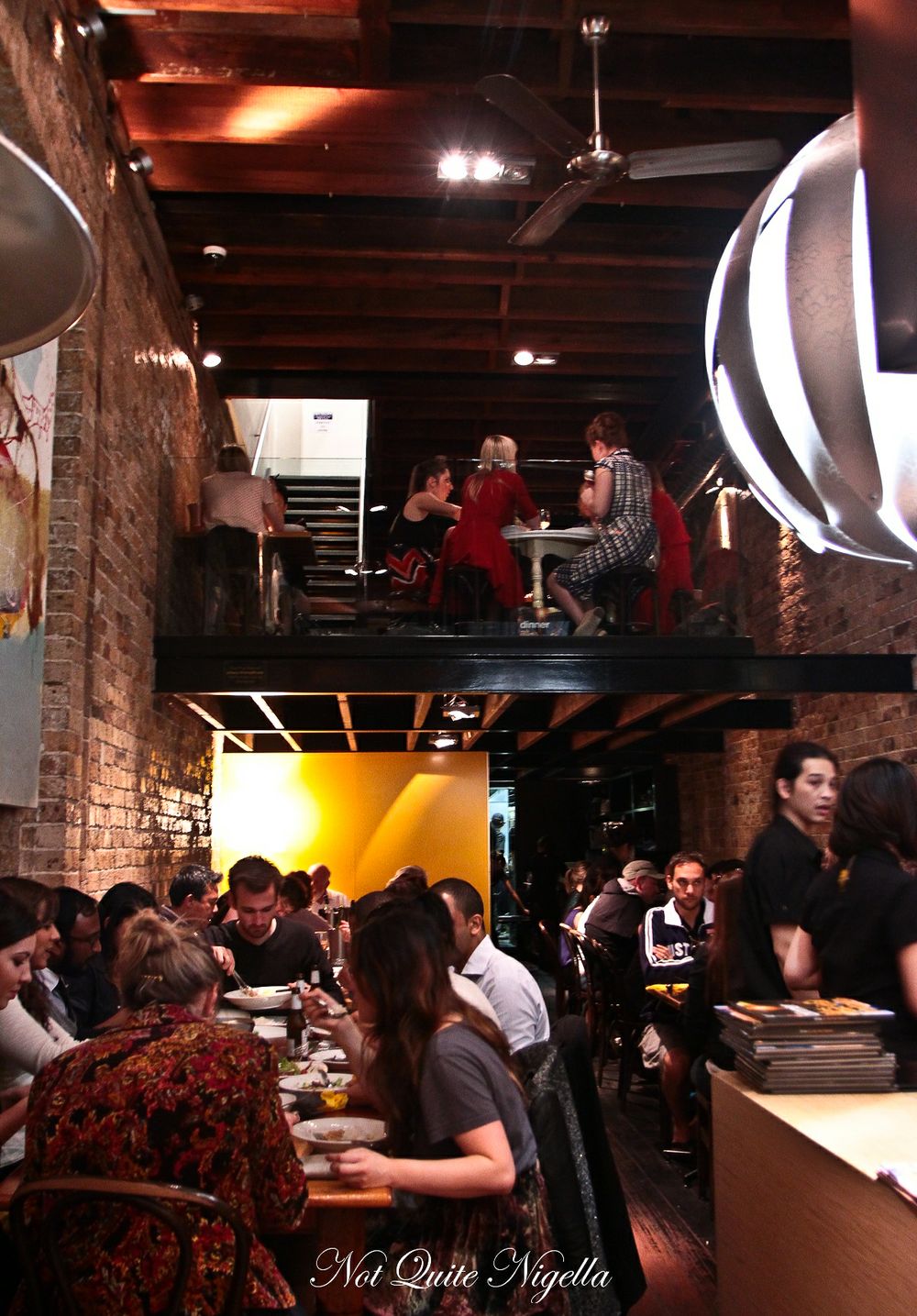 Chat Thai is the uber popular Thai chain of restaurants whose location can be signalled by the crowd of people queuing outside. We're at the Thaitown location, which is the original location located on Campbell Street in Haymarket right opposite the Capitol Theatre. It's a long, narrowish space with exposed brick walls and paintings. You walk past the crowd of people that stand and sit transfixed, watching the chefs cook in the front kitchen. They await their name and number being called like yum cha patrons. 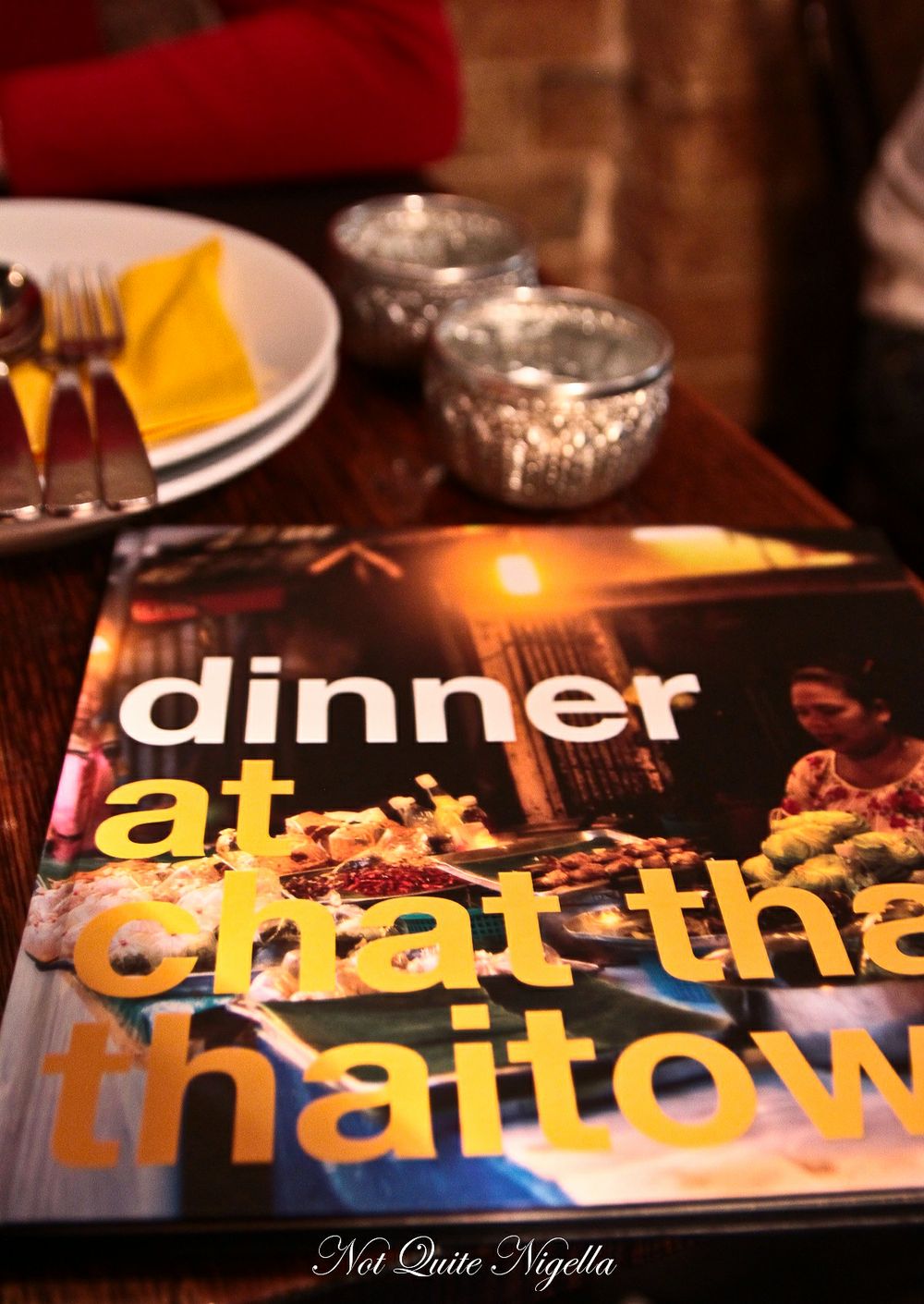 Seating is crowded and it is noisy inside with much jostling of elbows. Our waiter is efficient and friendly enough but the aim is to get you fed and turned around so that someone else outside can take your place. We have a look at the menu which actually looks like a book about the experience rather than the actual menu. The menu is varied and we choose quickly. 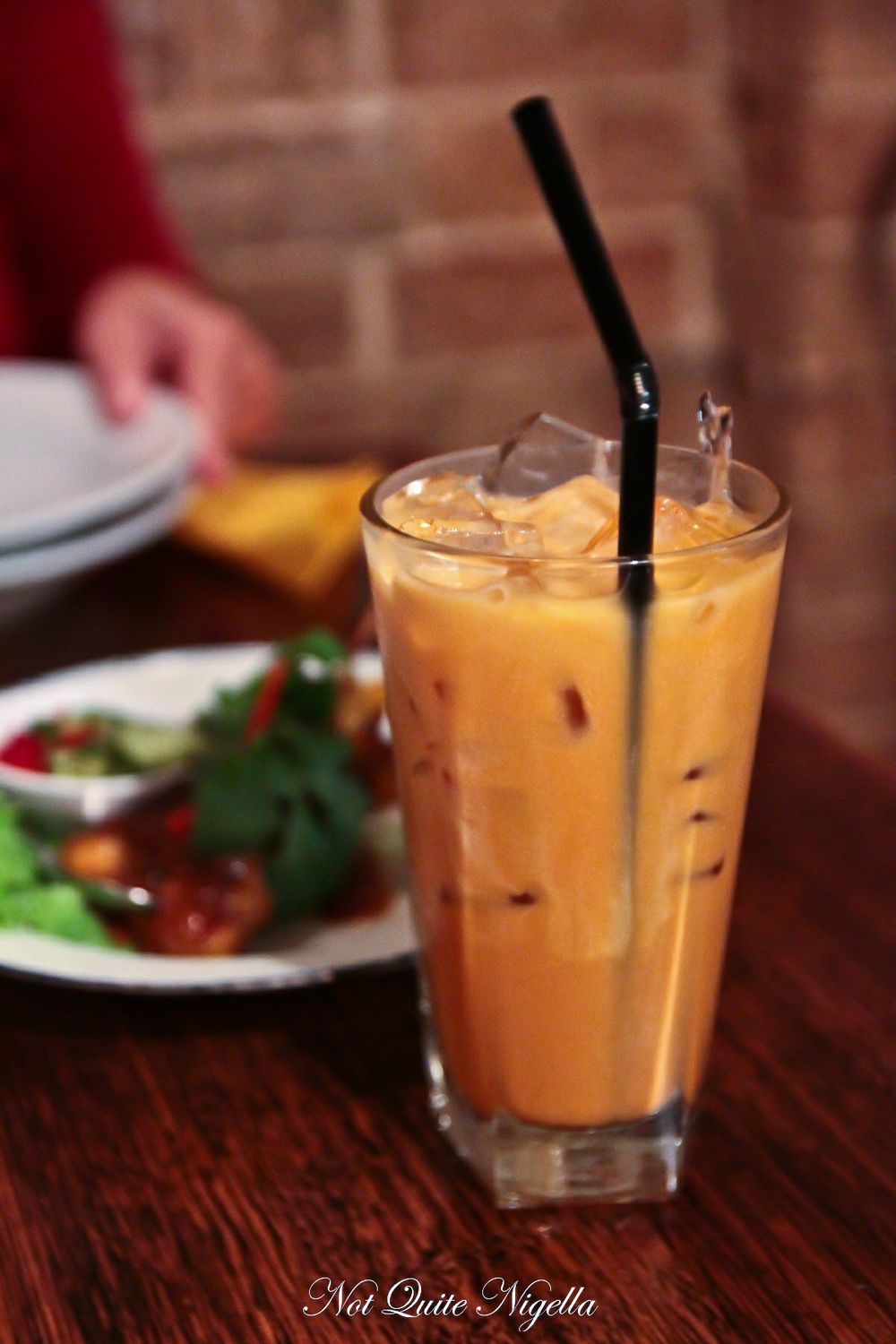 There are a range of soft drinks but I decide to try a Thai tea. A strong black tea mixed with condensed milk and sugar, it is sweet and strong but really quite addictive. 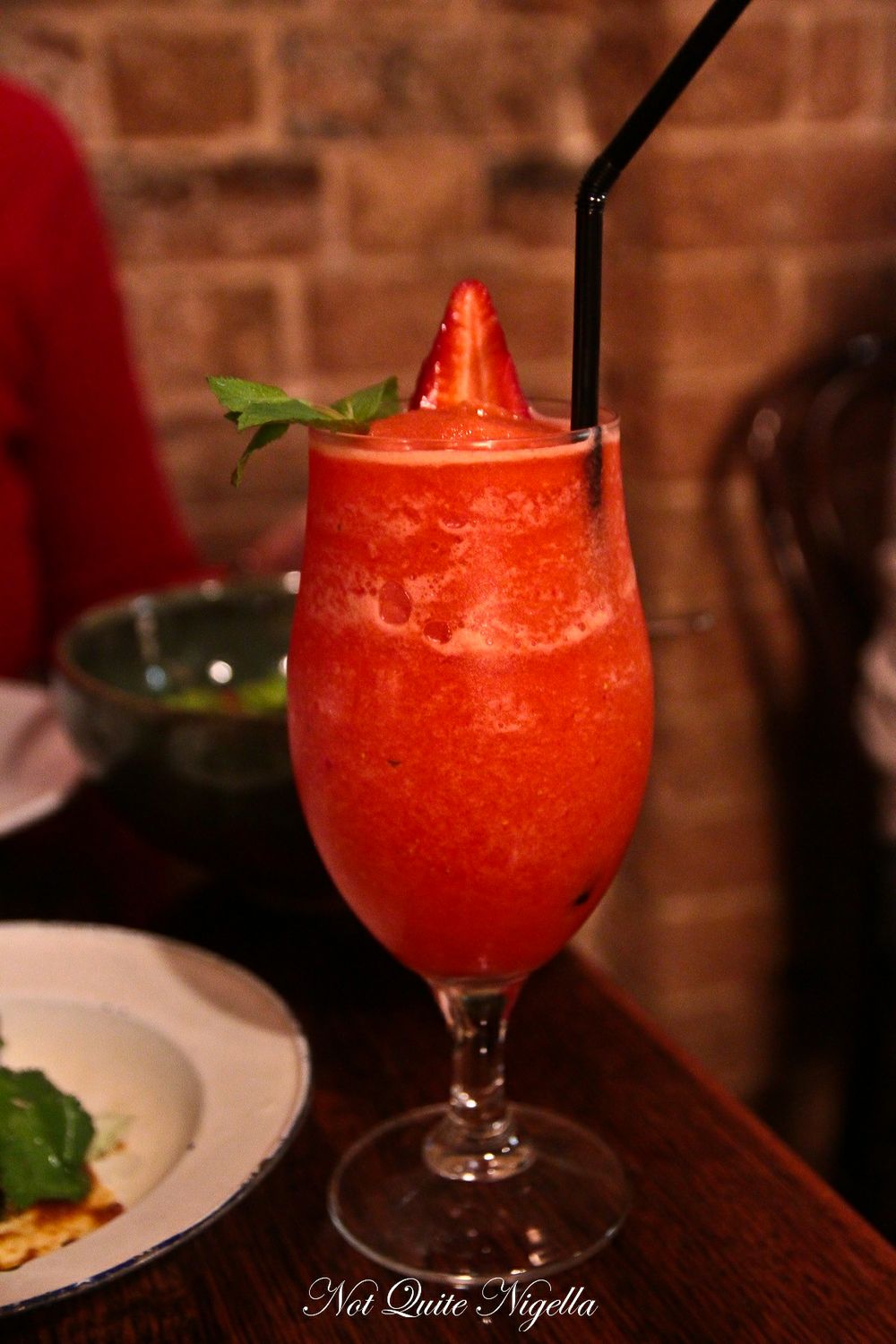 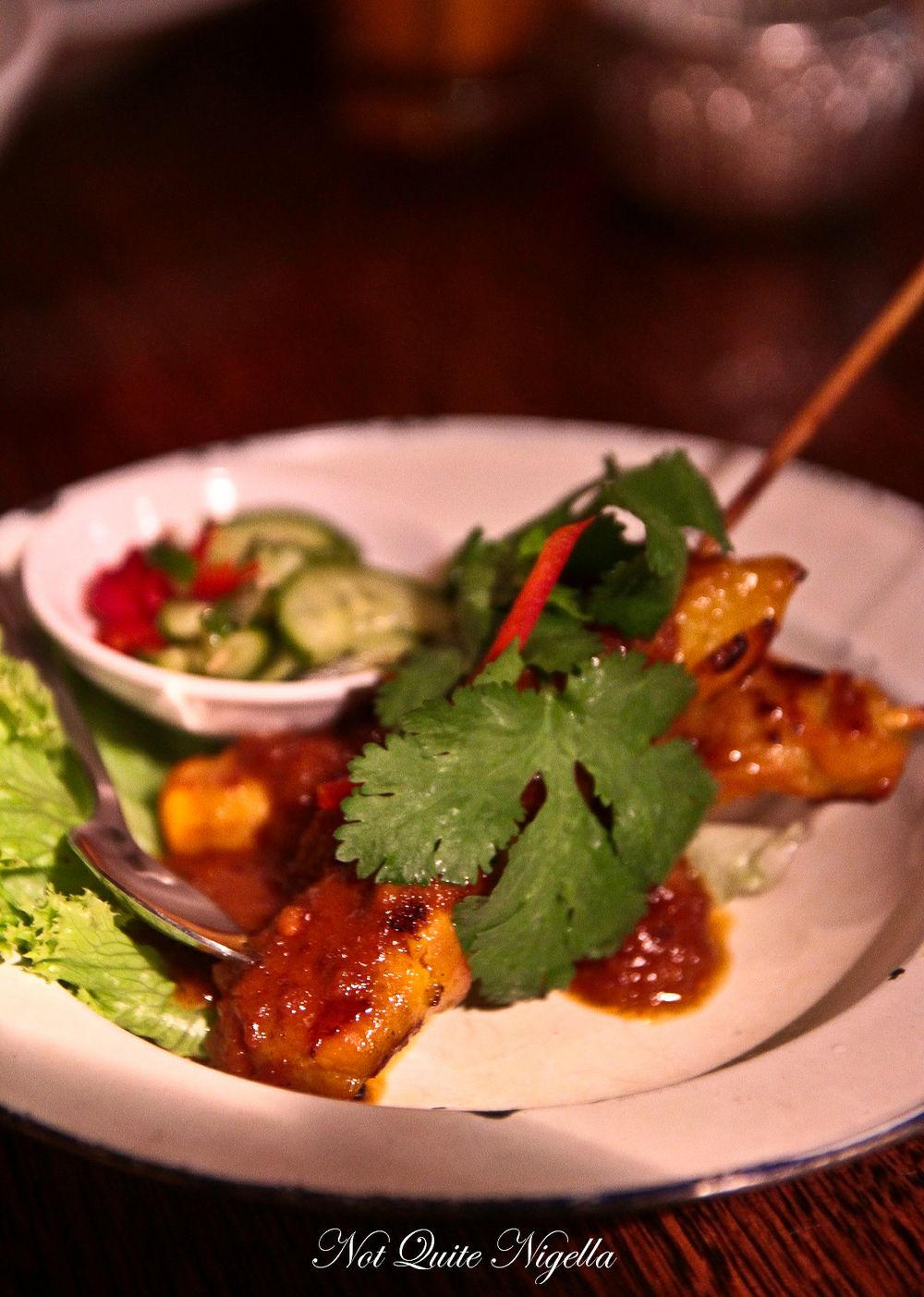 Gai chicken satay (each) $2 each

There was so much on the menu that it was hard to choose so we decided to go for the classics on the entree menu. We started with the chicken satay skewers. The entrees came out in a flash and we take a bit of the juicy, chicken satay sticks blanketed in a thick satay sauce. These came with a cucumber chilli salad. 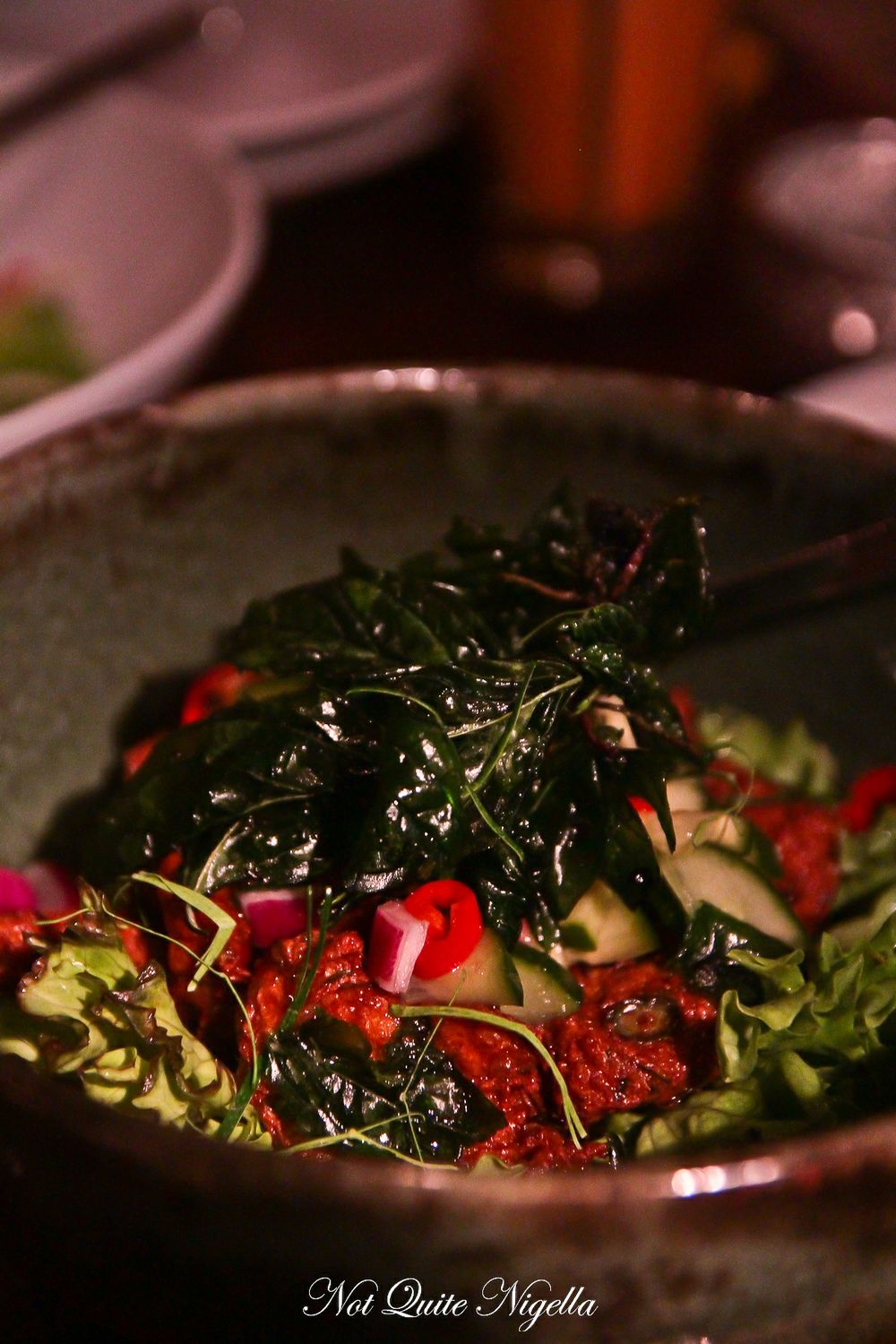 This was one of my favourite dishes although rather surprisingly described as "dollops of fried fish cakes." They really were dollops though but light and puffy and worlds away from any tough, chewy or firm fish cakes. They were served on lettuce leaves, in a generous number with pickled cucumber relish and a tumble of deep fried Thai basil leaves. 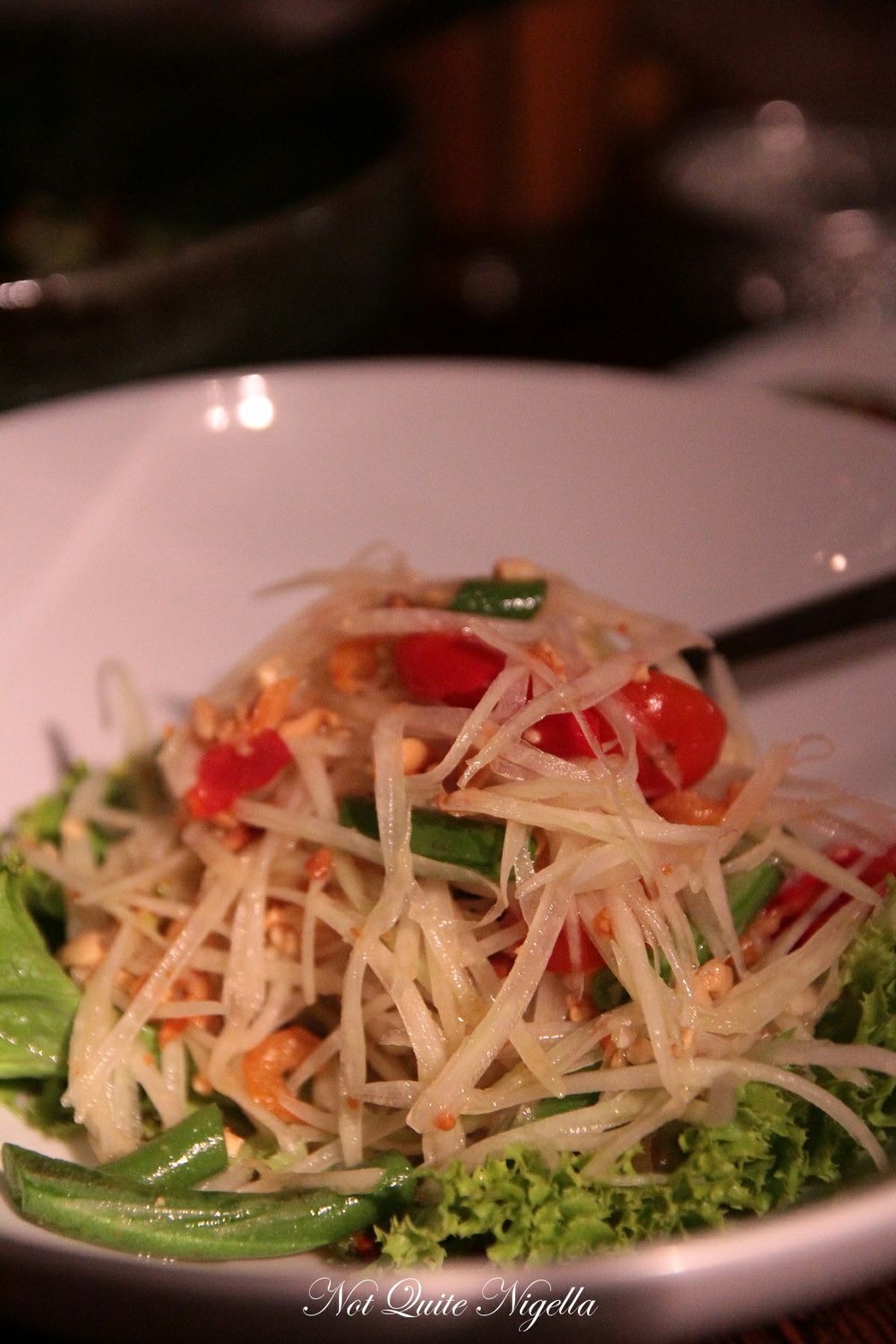 There are five types of sum tum salad, that wonderfully refreshing green papaya salad and our waiter recommended this version with peanuts and dried shrimps said to be a spicy, salty and slightly sweet version. It was crunchy and fresh and transported me back to holidaying in Thailand. 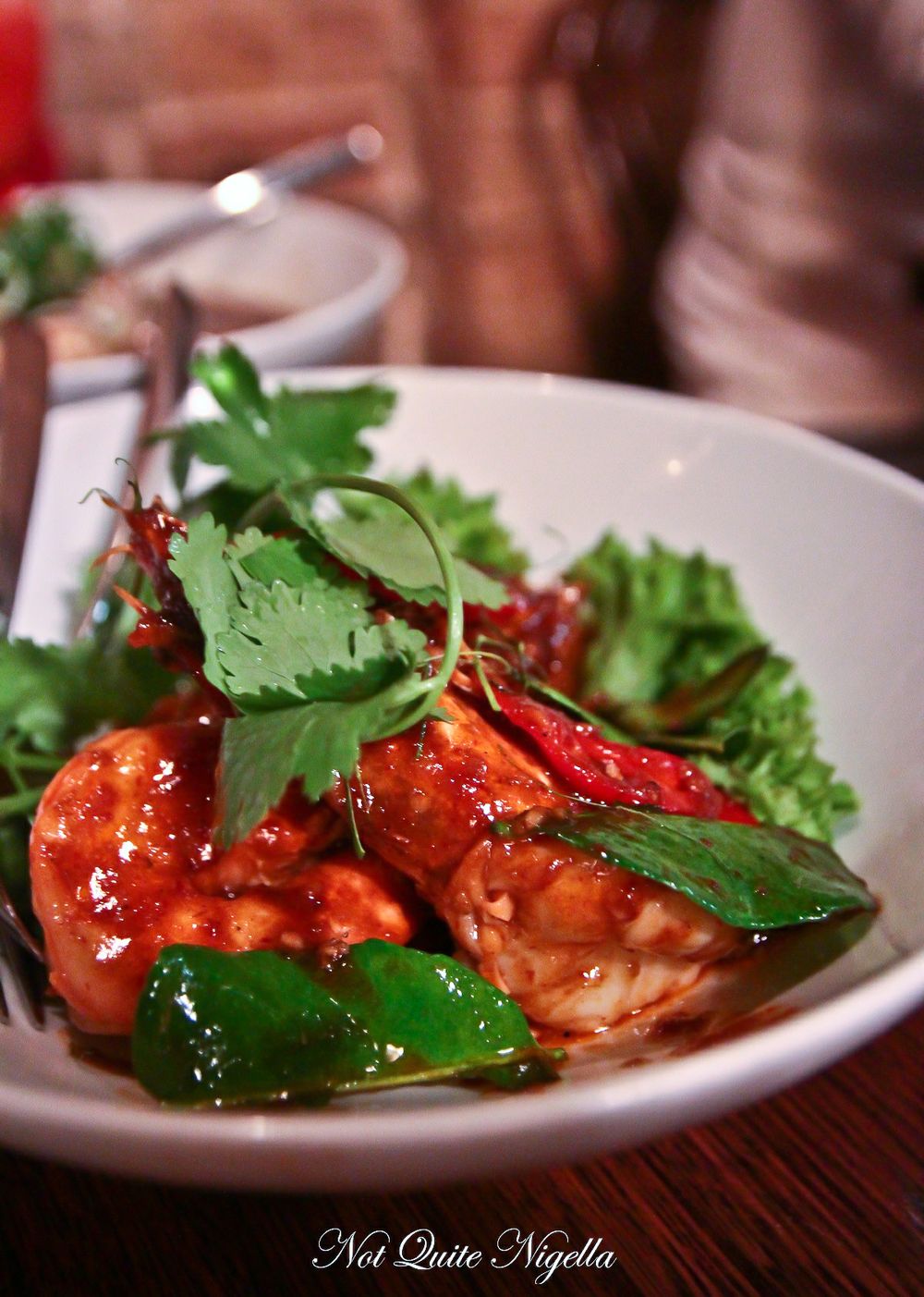 A small pause between entrees and mains the two mains arrived within minutes of each other. The first was four enormous stir fried king prawns on smoked chilli jam with kaffir lime leaves. The prawns were enormous and firm but not rubbery with a delectable sweet smoked chilli jam sauce offset by the coriander and kaffir lime leaves. I would have loved a knife to be able to cut the prawns as they were so large (not that I'm complaining about overly large prawns...). 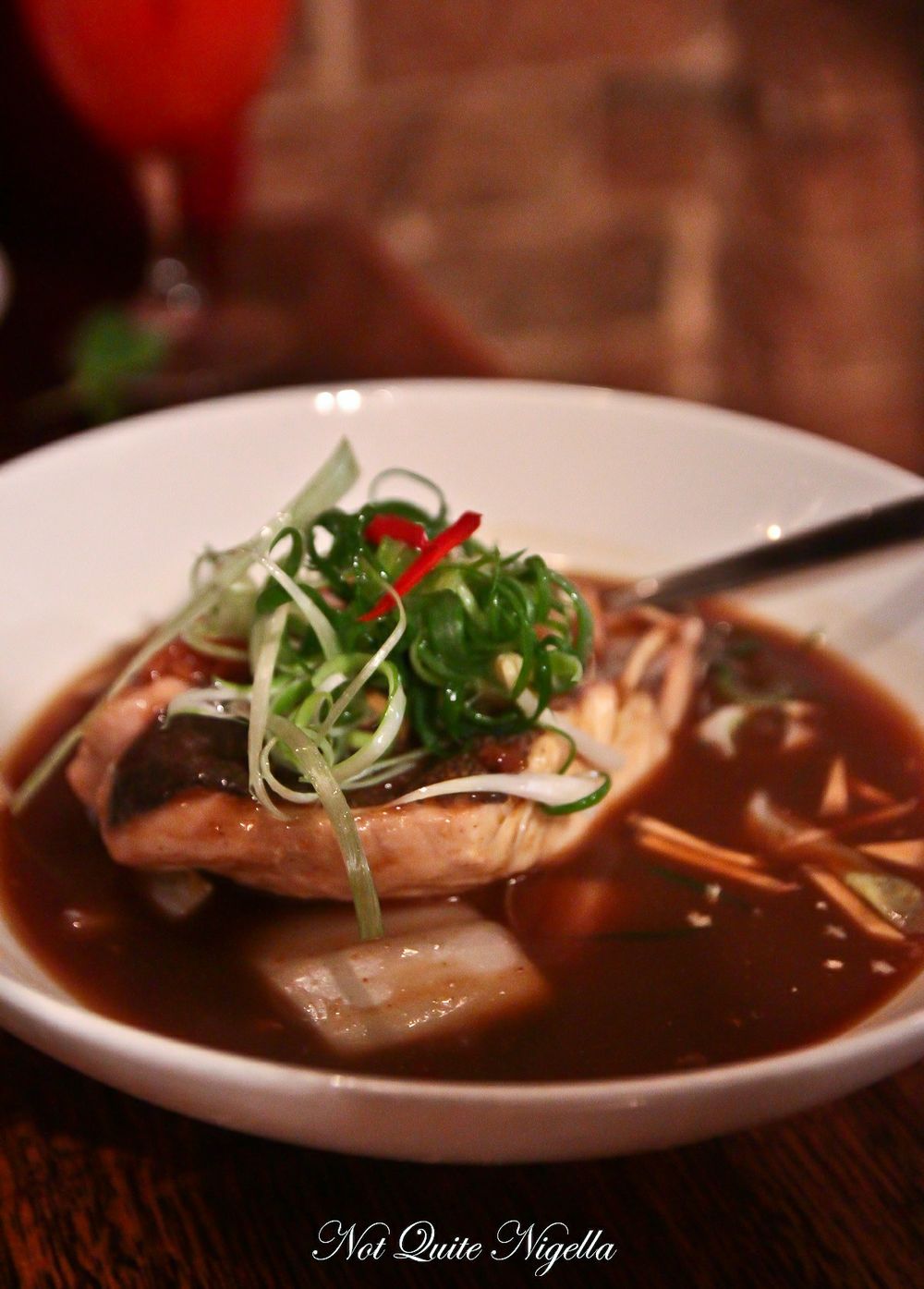 Our other main was enormous and sadly there was no way that we could finish it. It was a large fillet of steamed blue eyed cod with caramelised palm sugar, turmeric and tamarind sauce with Chinese cabbage, spring onion and chilli. It struck me as very sweet and strong with the gentle sourness of tamarind and the fish was cooked well. It was good but perhaps not one of those dishes that you would hasten to order a second time. 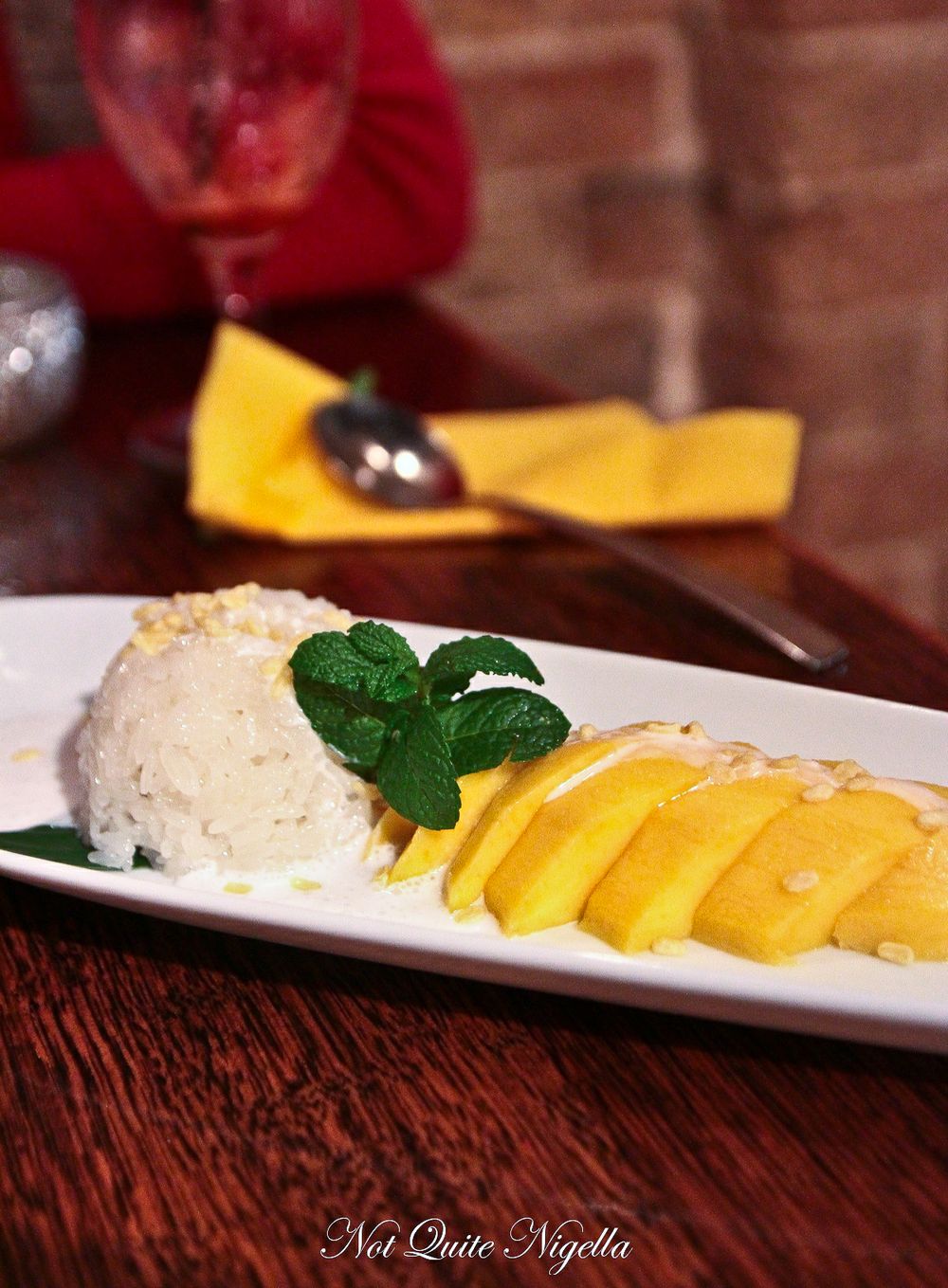 There was just room for one dessert shared and even that was probably pushing it. But the dessert menu with two and a half pages of offerings is hard to ignore. Overwhelmed by choice, we ask the waiter what is good and he gives us one answer, the sticky rice with mango. It's a mound of salty sweet sticky rice with a little sweetened coconut cream and sliced fresh mango. On top of this is a sprinkling of crunchy rice and the whole thing has a good balance of textures and flavours with the rich coconut and salty sweet rice and fresh, sweet mango. 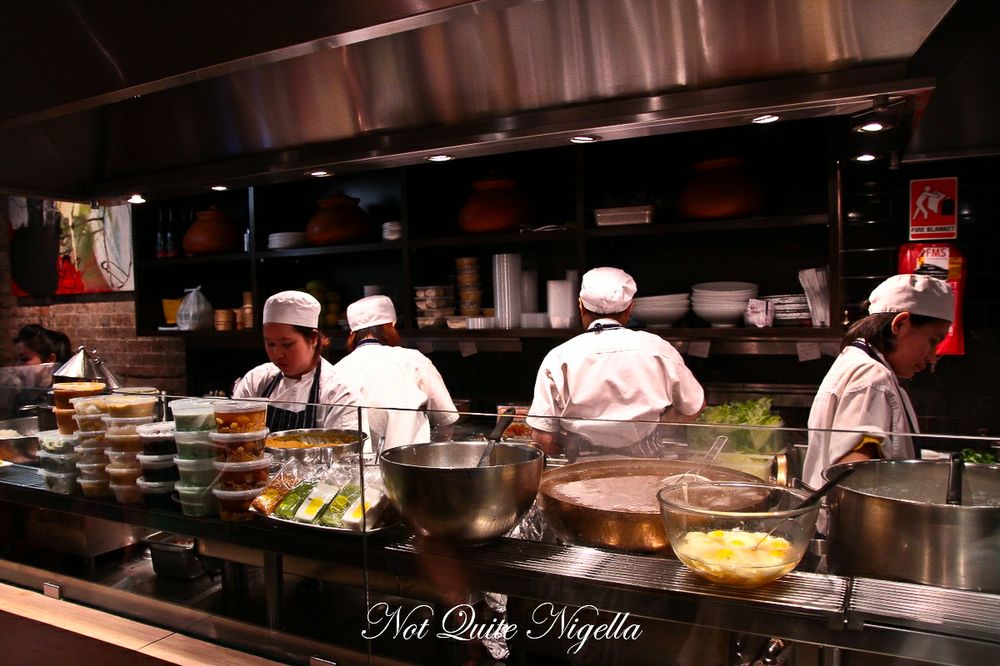 A few nights later, Mr NQN and I visited Chat Thai and without a booking, waited in the queue with everyone else. As it is an unseasonably chilly evening, they are nice enough to bring everyone cups of hot jasmine tea and the wait is about 30 minutes in total as we progress from standing outside to moving our way into sitting on the precariously lopsided stools. 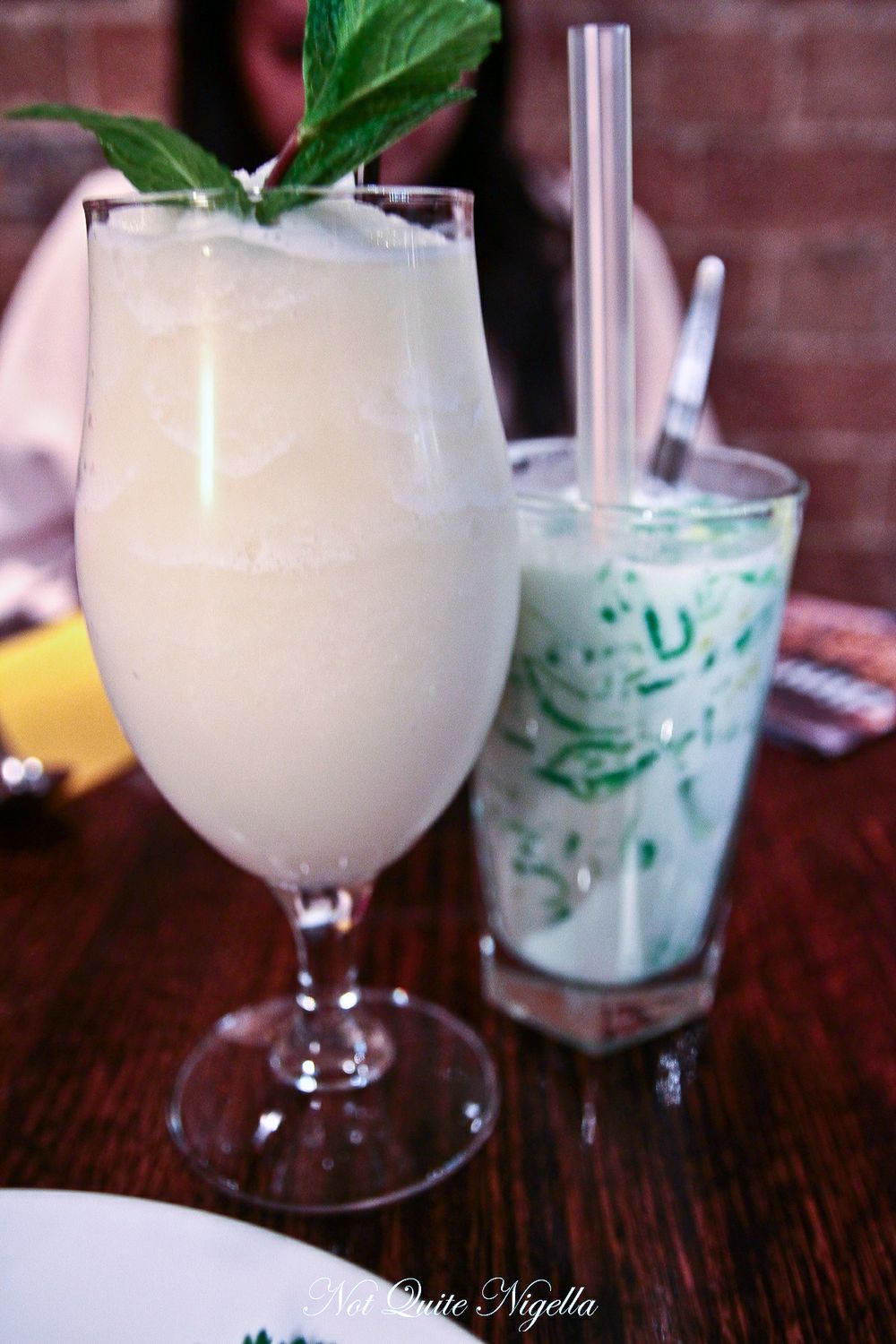 Just like the cendol, this drink is made up of coconut milk with pandan noodles that are silky soft - much softer than we've tried. "What is that?" the girls sitting at the table next to us enquire about it. With the second drink, both Mr NQN and I like Yakult so we thought we'd try it blended up with ice. It's actually quite good but obviously quite sweet as Yakult trends to be. A drink this large is also a bit much and we have trouble finishing it as it is very sweet and strong. 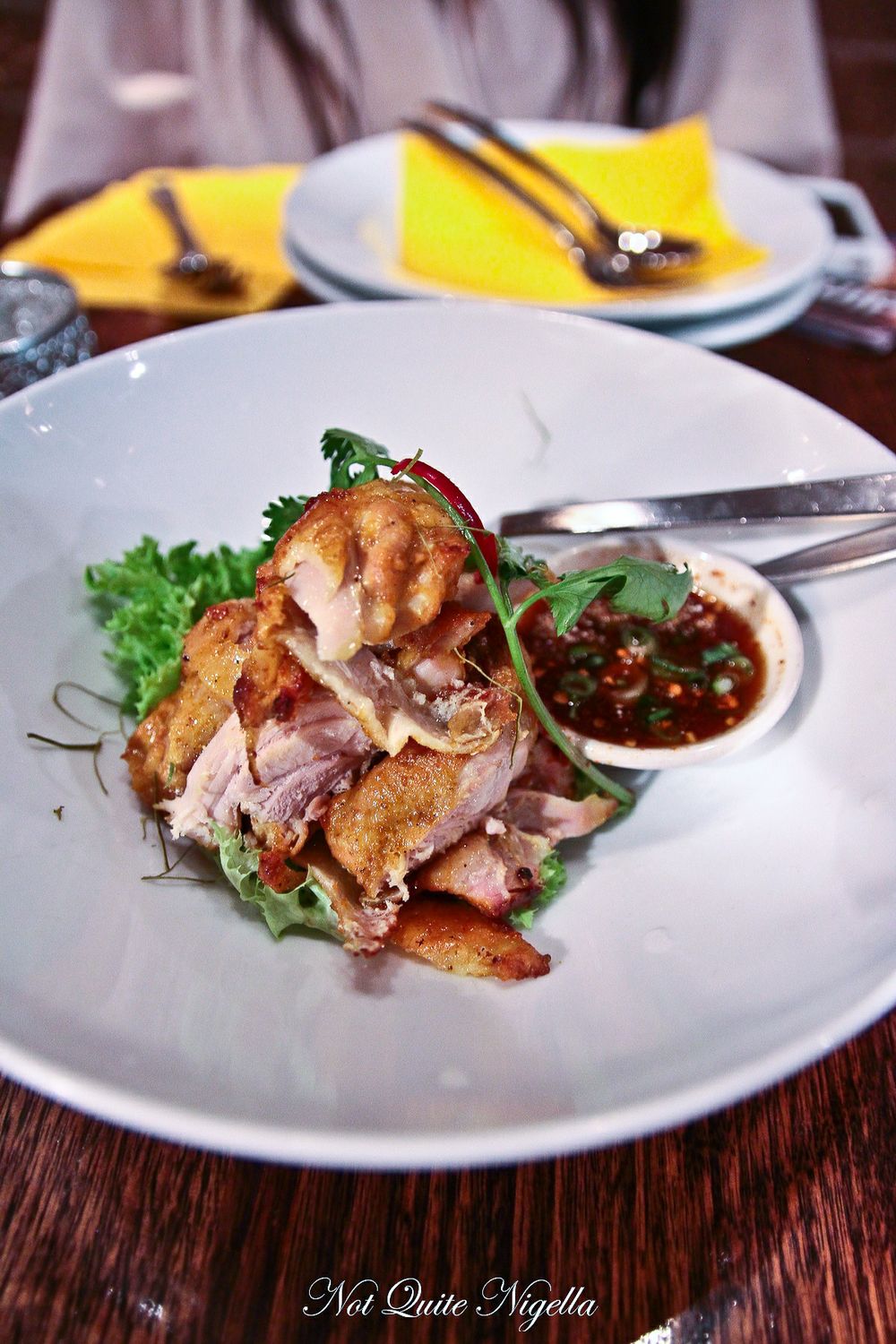 Our dishes come out quickly-the gai yaang is a favourite dish from holidays. Here it is a char grilled turmeric and lemongrass marinated chicken with smoked chilli and tamarind relish. The flavour is light and we've had it a bit  sweeter in Thailand or served with a sweeter sauce whereas this is more firmly in savoury territory with the smoked chilli and tamarind relish. 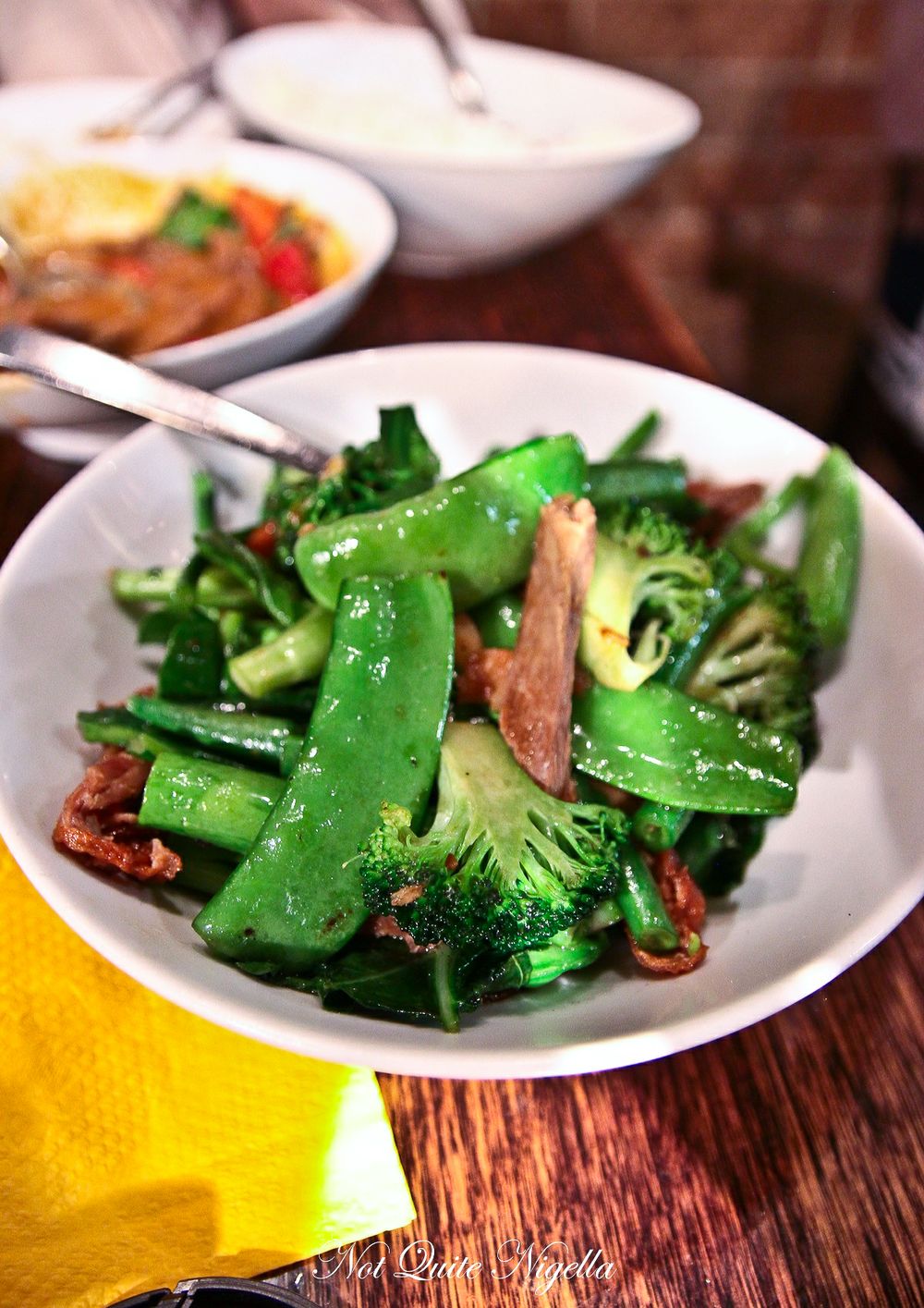 This is a stir fried five spice duck dish with seasonal greens although you might be hard pressed to find the duck in this dish. It's mostly greens and quite disappointing. We watch the table next to us listlessly pick through the greens to find a sliver of duck, just as we did.

The Panaeng beef curry with kaffir lime leaves and basil came with a delectable sauce. The beef was a bit tough in parts but we ended up just spooning the sauce onto the rice. 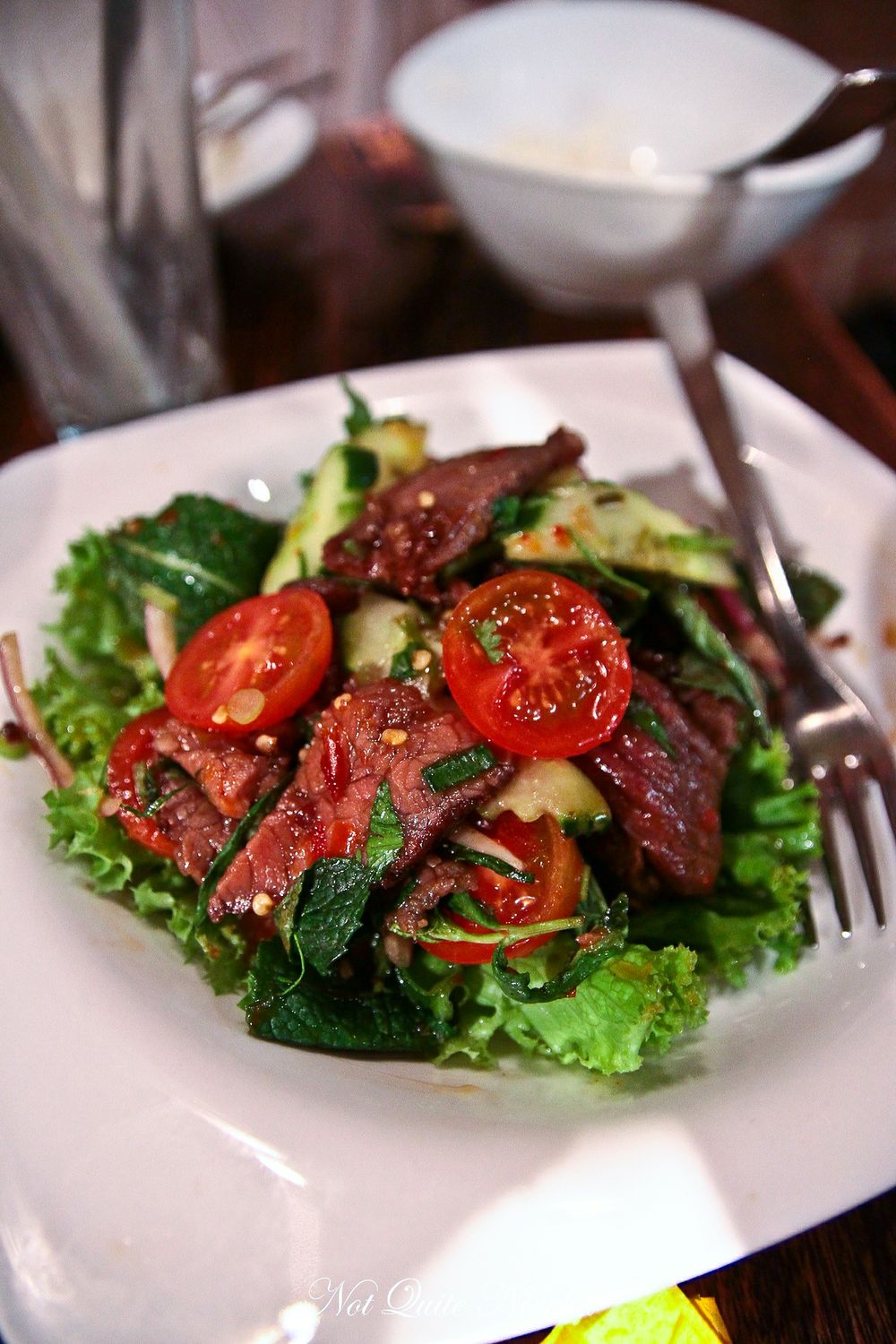 There was a big gap between this and the other dishes and we thought that they had forgotten it. It was a char grilled beef salad with tomatoes and fresh chilli. The beef again was quite tough in pieces with some pieces with inedible gristle. However the marinade and flavour was excellent. 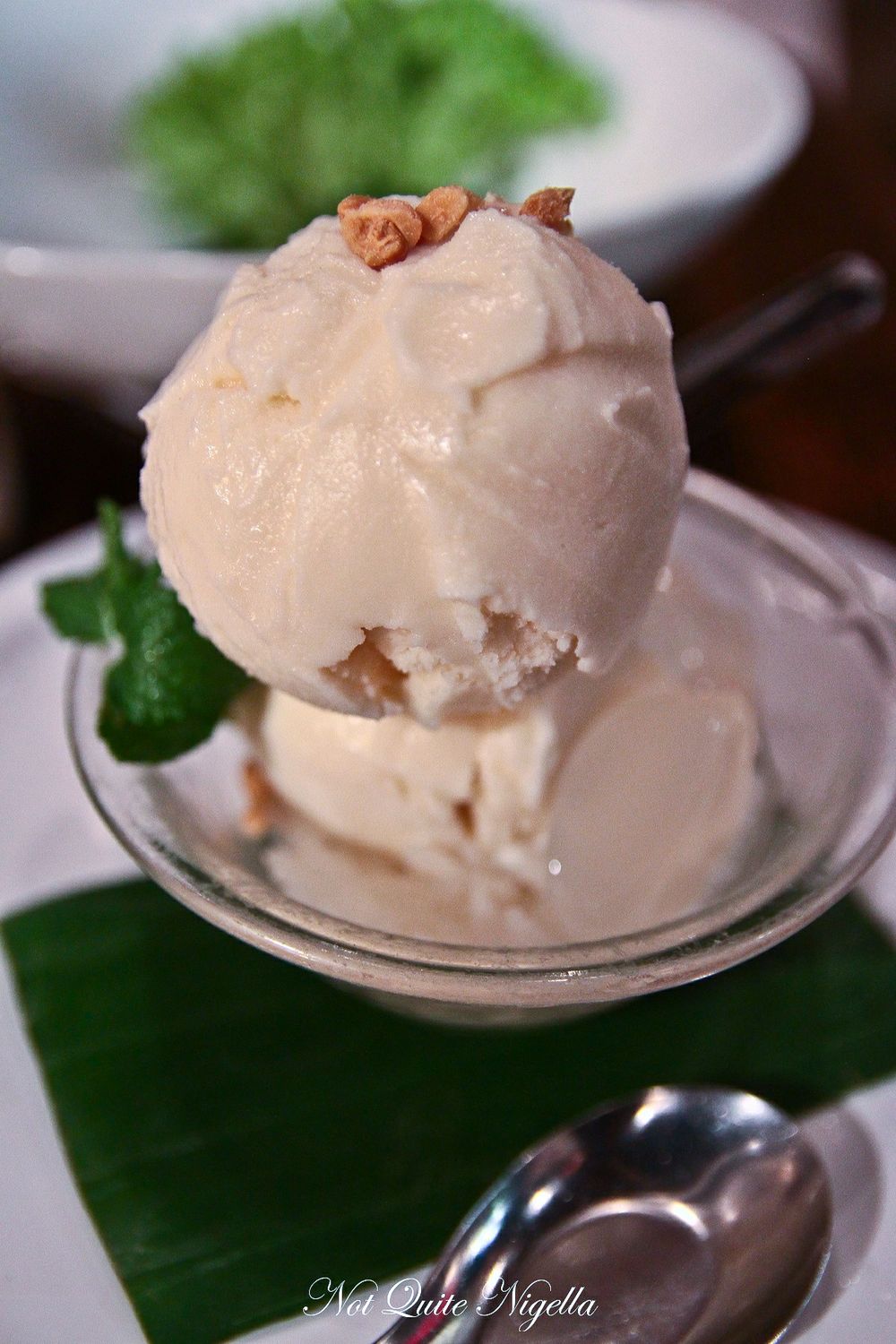 I made sure that I left room this time for dessert as I love Thai desserts. The coconut ice cream came as two large scoops of coconut ice cream on a bed on sticky salty sweet rice and syrupy palm seeds with chopped, roasted peanuts. It was rich and the ice cream had a good coconut-y flavour to it. 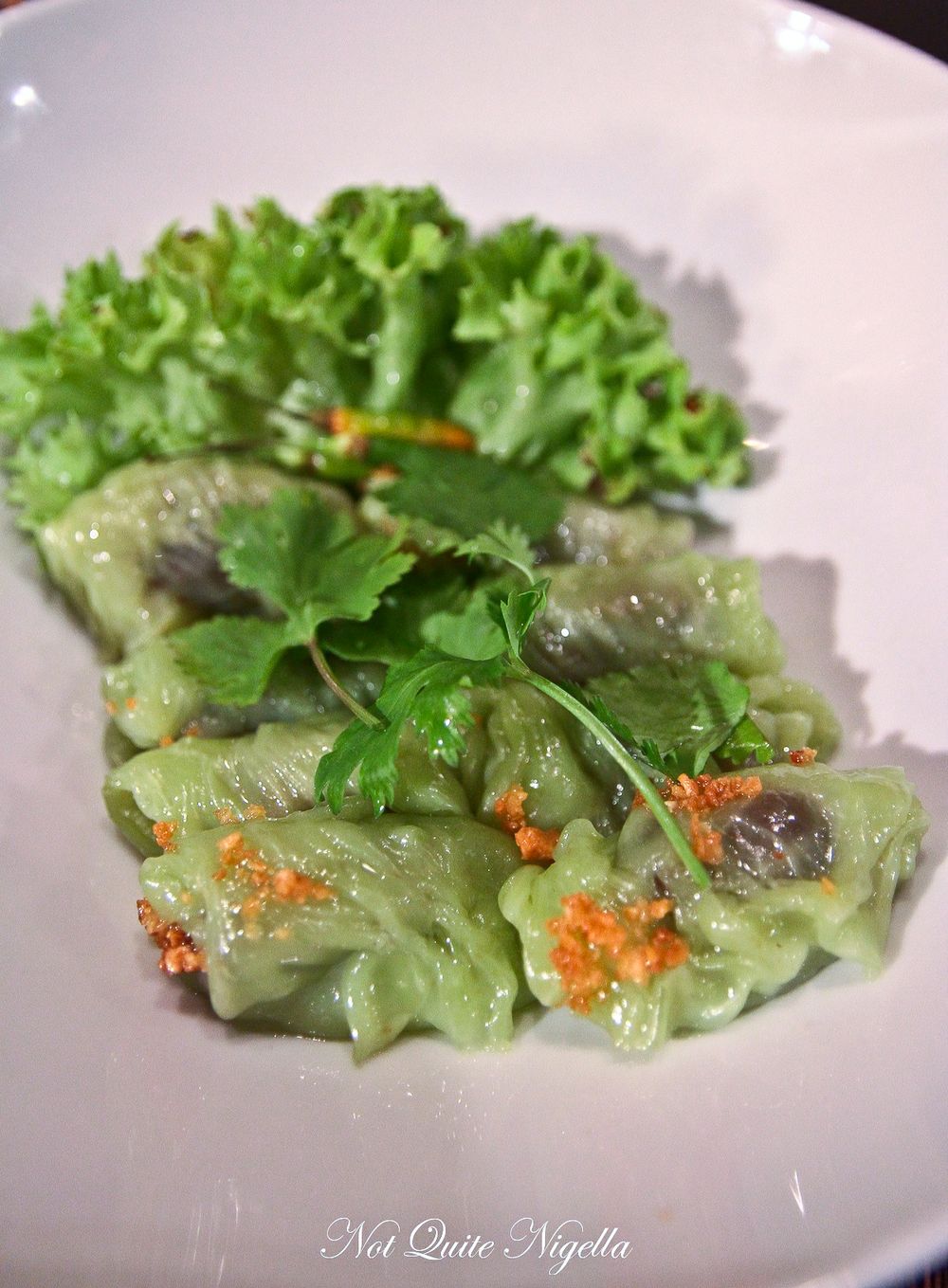 While we were waiting in the queue, we watched them making this dessert in the front open kitchen. We asked the waitress what it was and she pointed us in the right direction. This turned out to be one of the more unusual desserts-so much so that it had Mr NQN flipping through the dessert menu to see that it was actually considered one. There were deep fried garlic chips on top of a rice dumpling outer and inside was palm sugar, peanuts and chicken. It actually was quite nice if you had had it as a dumpling entree but as a dessert, it was very savoury so it was hard to get your head around it as a dessert.

We ask for the bill and pay it and I'm reminded of dining the night before with Ute where she said "I feel like we're going to get a report card" Ute says as we leave. "We're getting a F for being late, F for talking to much before ordering, F for trying to pay with an Amex and F for splitting the bill. And then you asked for a second copy of the bill and it was all over!"

So tell me Dear Reader, do you mind queuing for meals or do you avoid places where you have to queue? 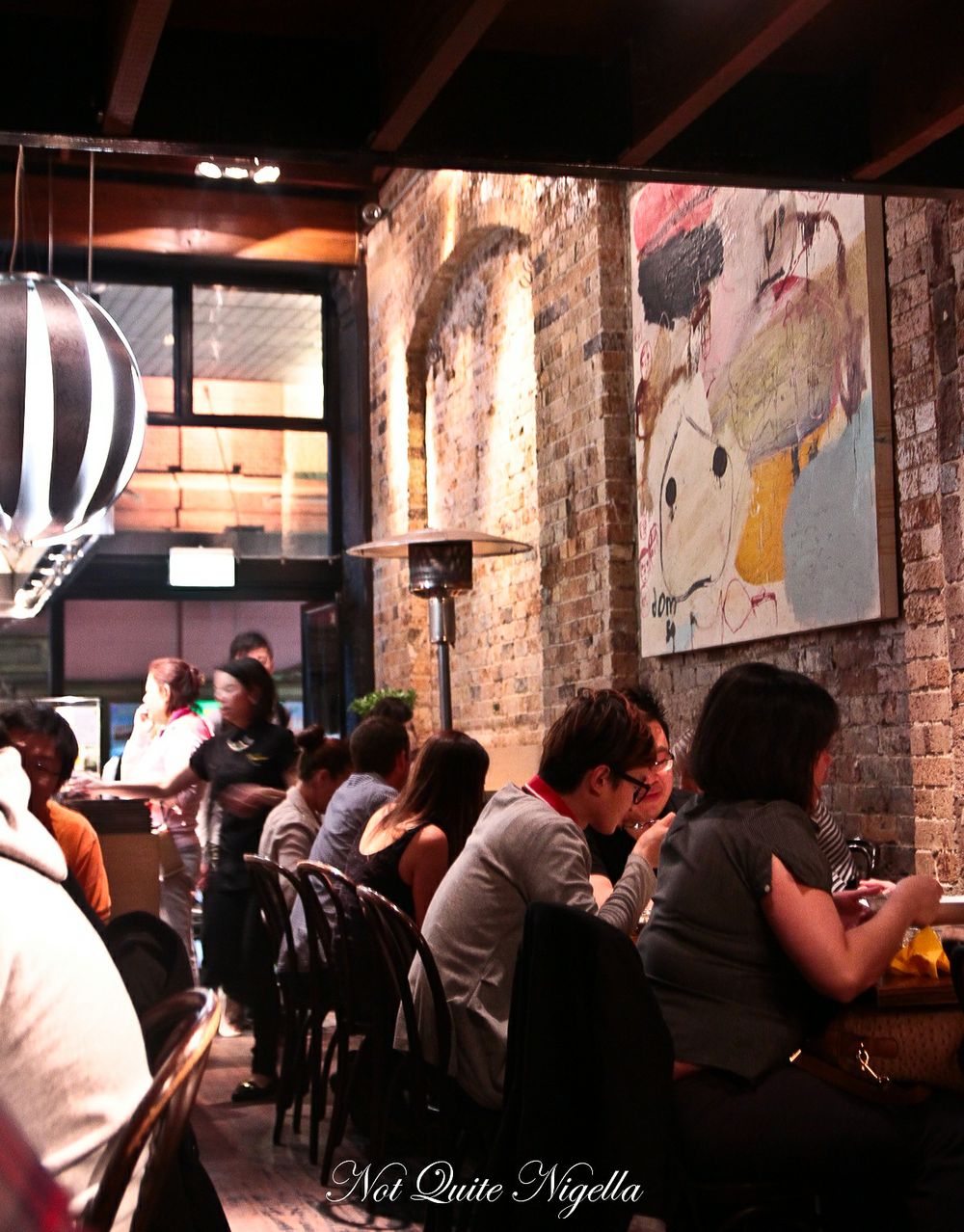 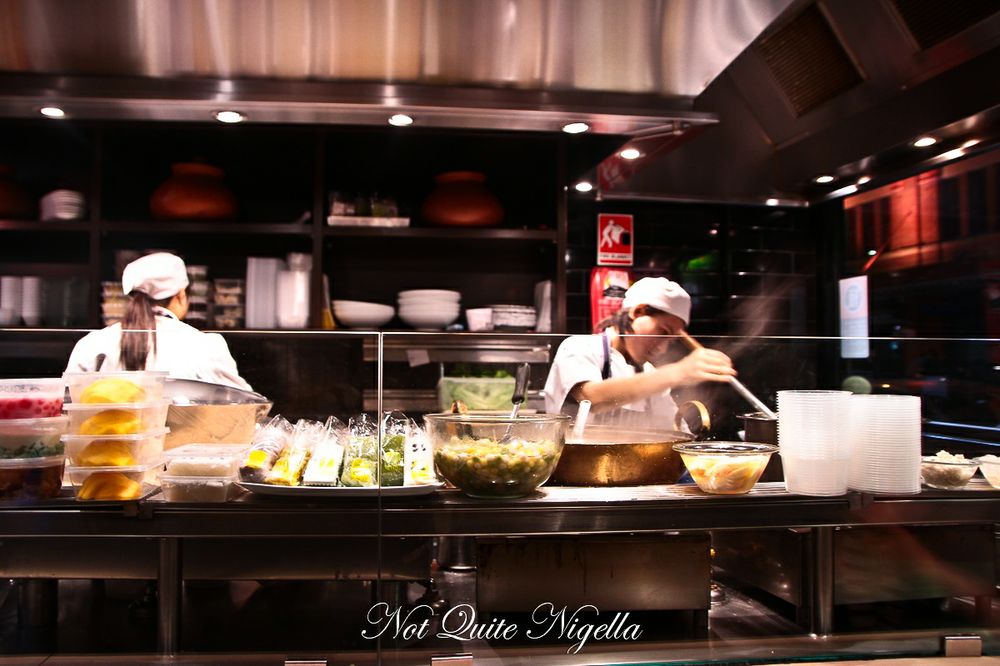