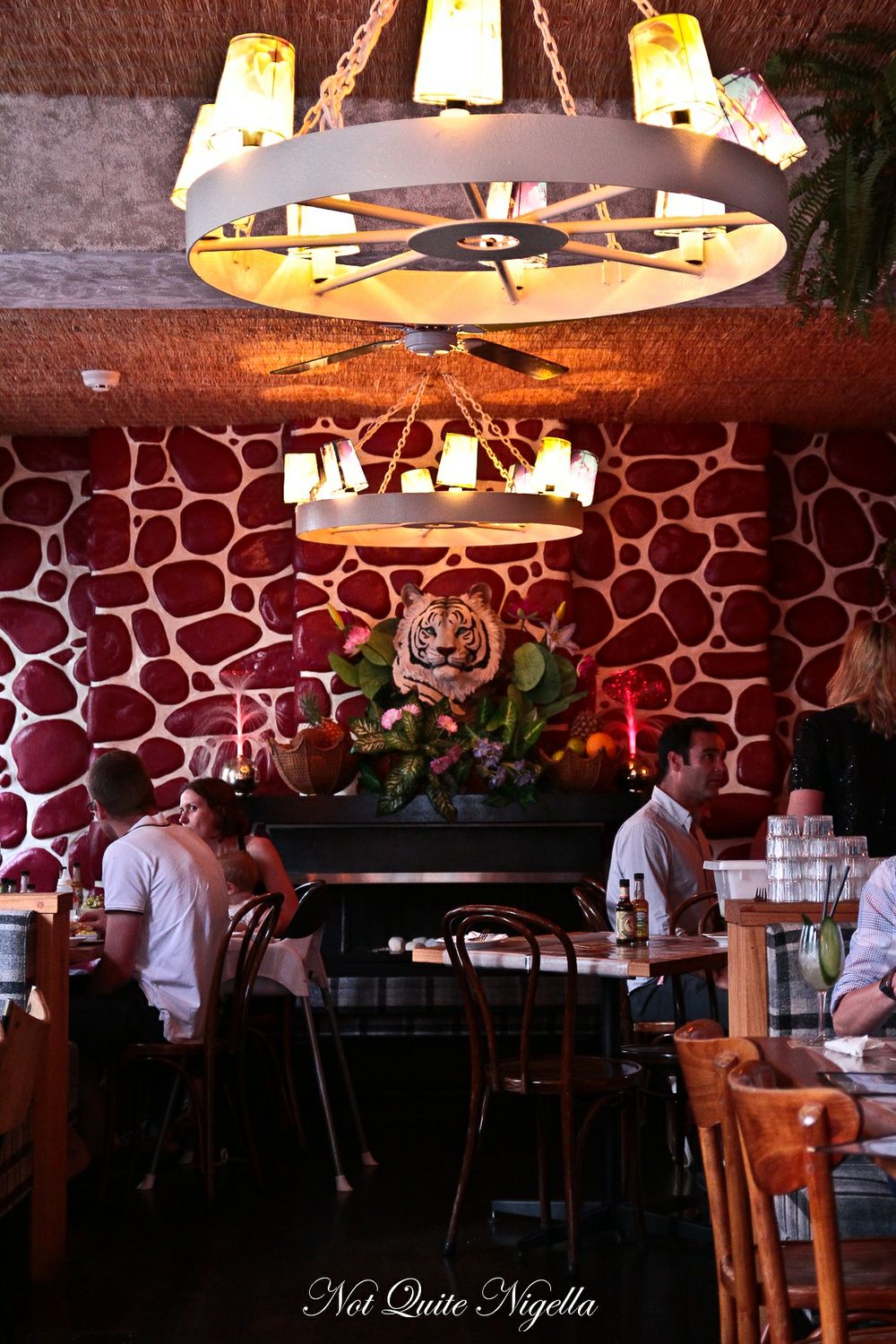 I can admit to knowing about at least five things about Jamaica. Jerk seasoning, Bob Marley, Usain Bolt okay, scratch that, make it three things. But the mere fact that I know so little about Jamaica and the Caribbean means that I find the idea of visiting one of their restaurants more intriguing. So plans were made to visit Queenies in Surry Hills with Mr NQN and friends Viggo and Louise after work. When I rang to make a booking at Queenies, upstairs at The Forresters pub on Foveaux Street in Surry Hills, it went through to a voicemail which led to another number and another voicemail. 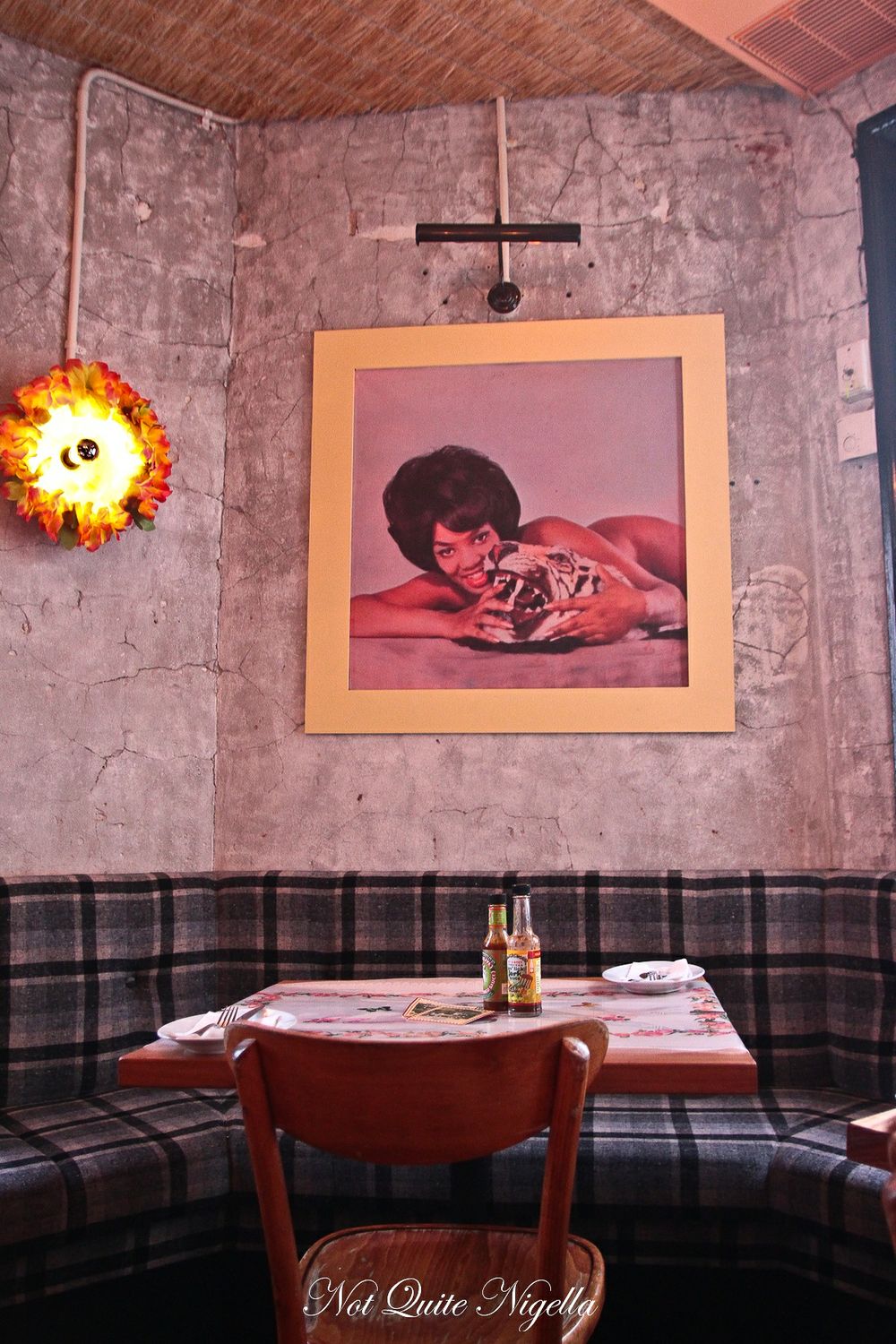 It turns out Caribbean and Jamaican food is popular among the Surry Hills folk. Queenies is hipsterrific made even more pronounced by the fact that it's Movember and beards and moustaches feature on many customers this month. 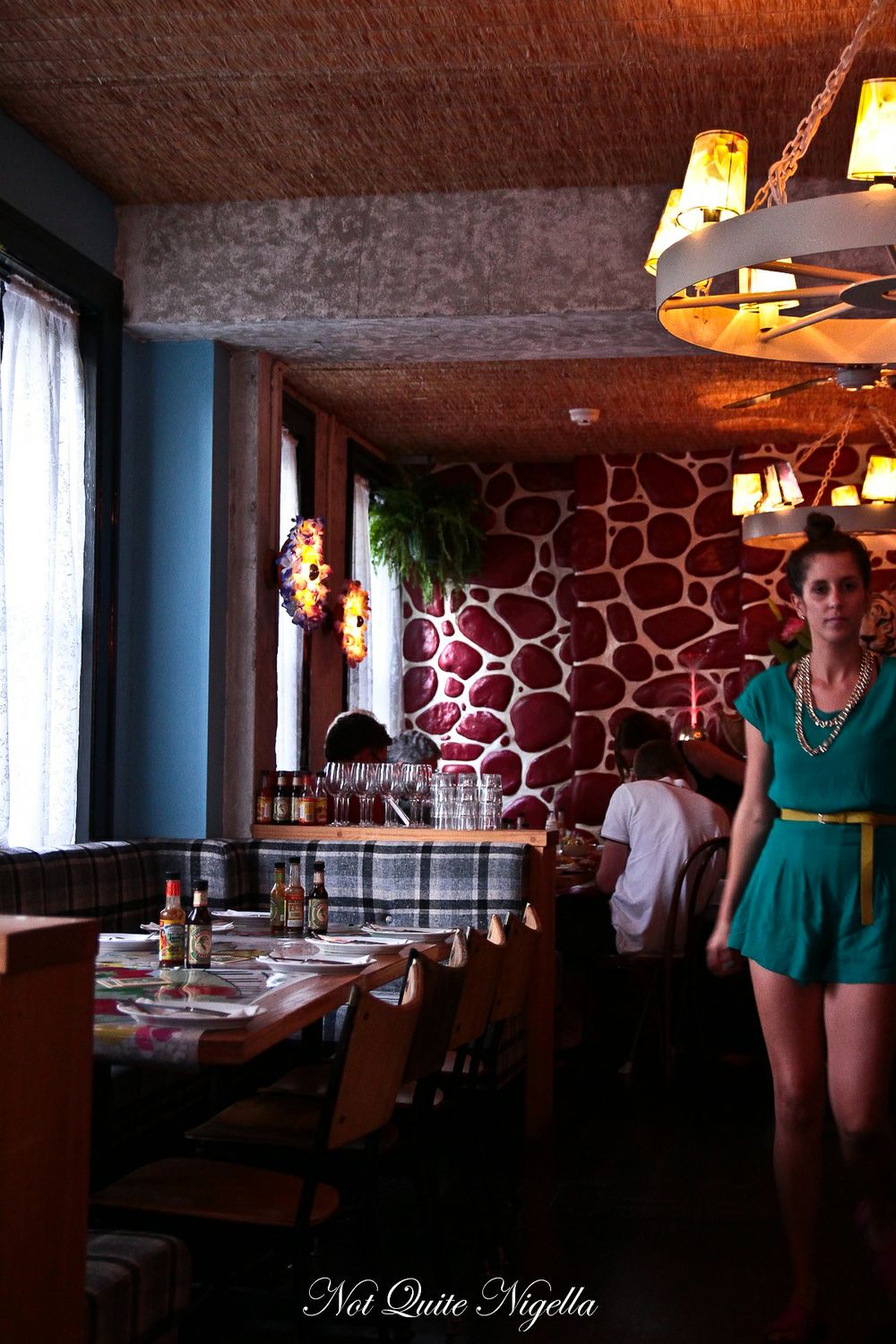 It's themed to the hilt (and oh, how much do I love a theme?). Inside, it does feel quite tropical inside especially with the buzzy vibe and you wouldn't necessarily know that you're in downtown Surry Hills. There's a straw thatched ceiling, lights made out of flower leis and those wooden salad bowls that your mum used to use, and flowers aplenty. A fan moves above painted in Jamaican colours and Jamaican glamour girl paintings line the walls. Like another of chef Jamie Thomas's restaurants, The Carrington, it has plenty to see and eat. 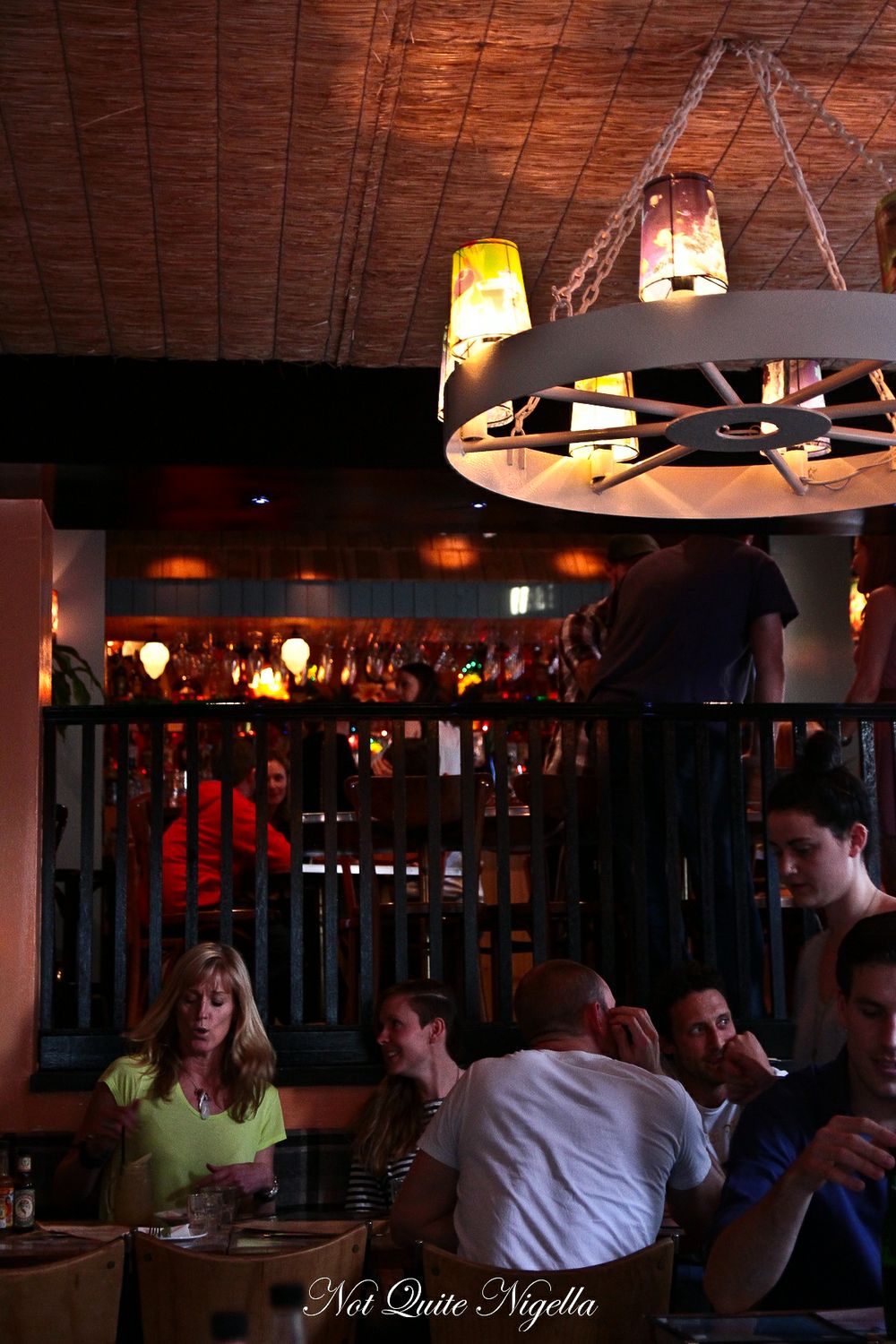 I know I'm like that annoying child that has to ask "why?" all the time, but I had to ask why Caribbean/Jamaican cuisine in particular? Jaime Wirth, co owner with James Miller says "Jamie Thomas and I are really into Jamaican food and wanted to do something new and really different (from downstairs) at The Forresters. We liked the idea of doing a cuisine that you can't otherwise get in Sydney as well. It's fun tasty food and just wanted to give it a roll." The name Queenie was "just a name. I was going to call my 12 week old daughter Queenie but in the end she got Winnie and the restaurant got Queenie's. I liked the way it sounds like your Caribbean grandma might own the place and be serving daiquiris behind the bar every night." 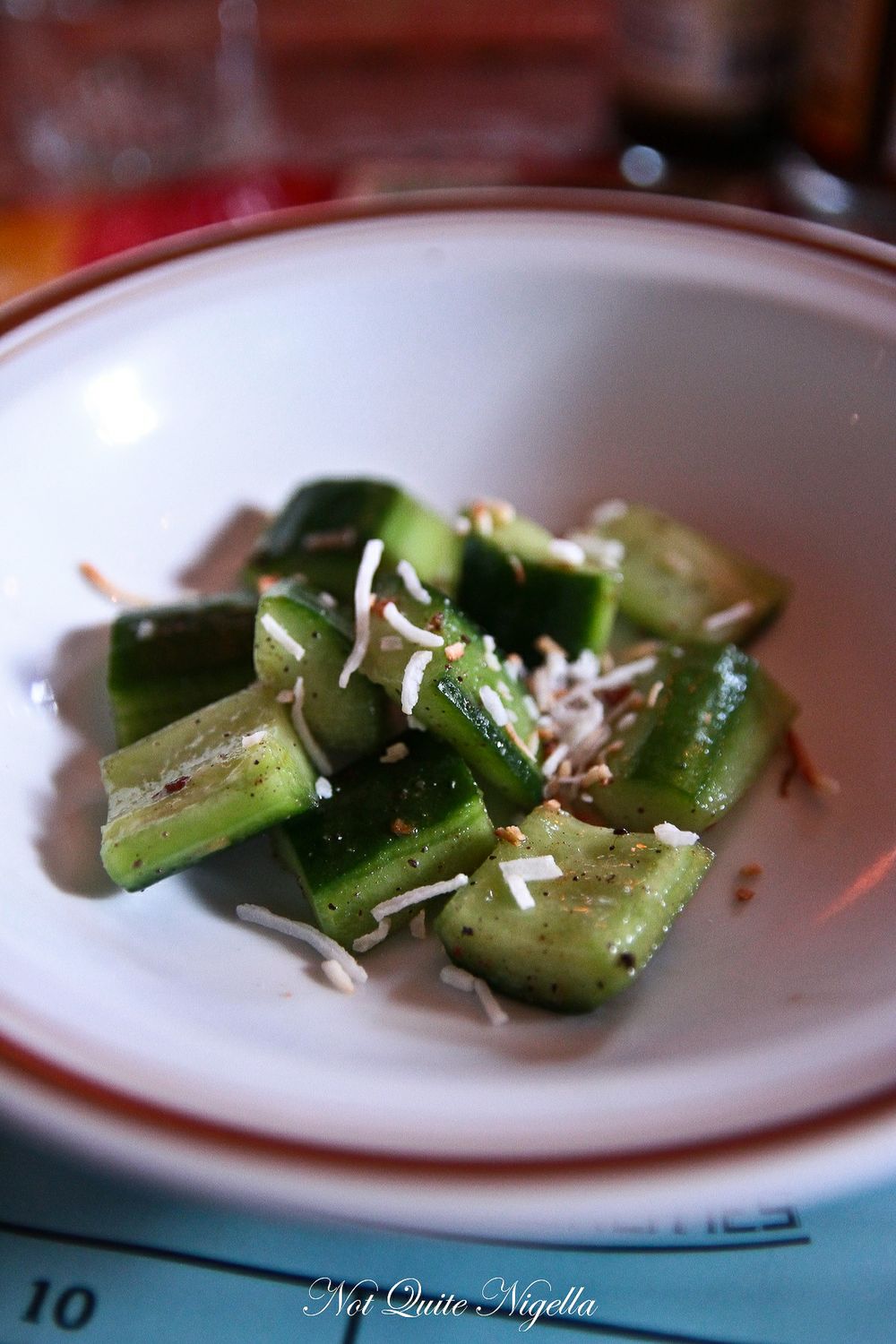 A little taster hits the table and it's jerked cucumber which is small cucumber pieces seasoned with that ubiquitous Jamaican jerk seasoning which is made up of fragrant allspice and spicy scotch bonnet peppers. Meals are designed to share and the tables are small. The food comes out quickly but they appear to stagger it so that you can fit it on the table. 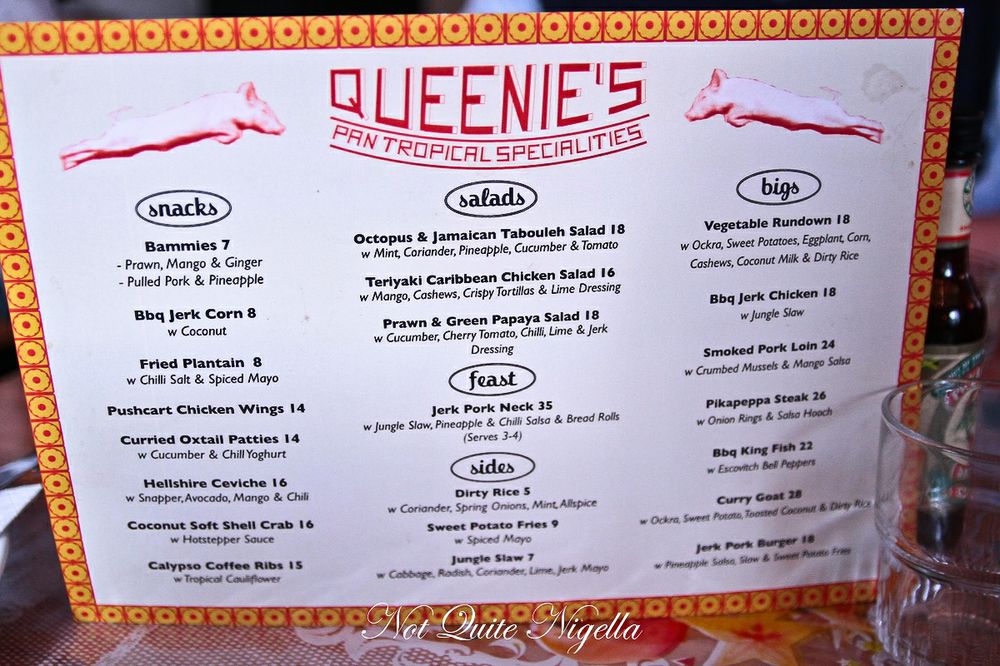 Prices are reasonable with the most expensive thing that we ordered at $18 although the Cuban beers at $8 and the cocktails at $16 add to the total and Mr NQN finds the bill more expensive than he thought it would be. If you're out to try as much as possible on the menu, some of the mains come with the sides on them. 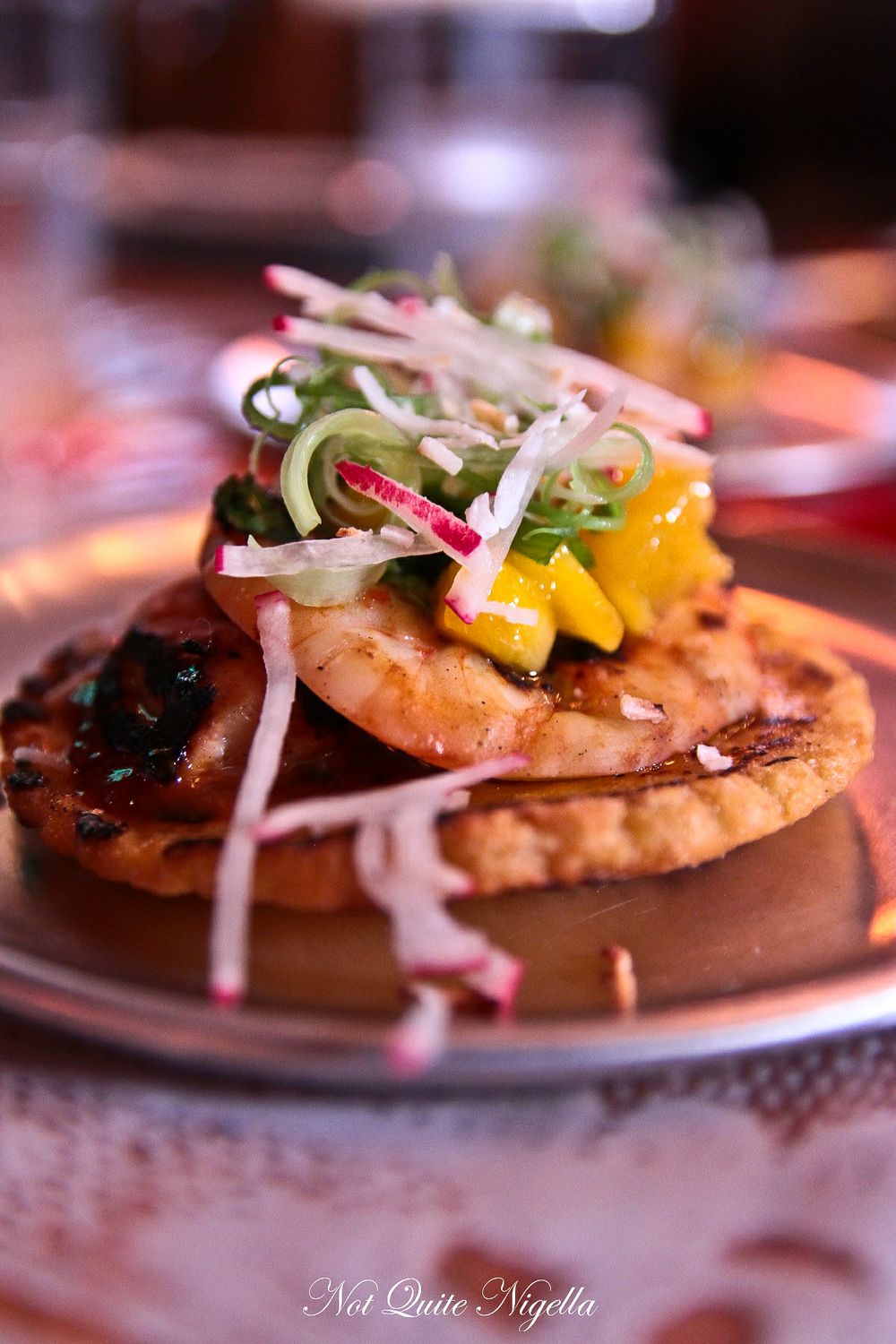 Huge trays of these go past us and they're one of the most popular menu items so we order a couple of each of the two varieties. What is a bammie? It's a grated cassava based flat bread and a cousin of the tortilla and here they served them already topped. The pulled pork and pineapple has sauce, radish and cucumber while the prawn with mango and ginger has radish matchsticks and spring onion. 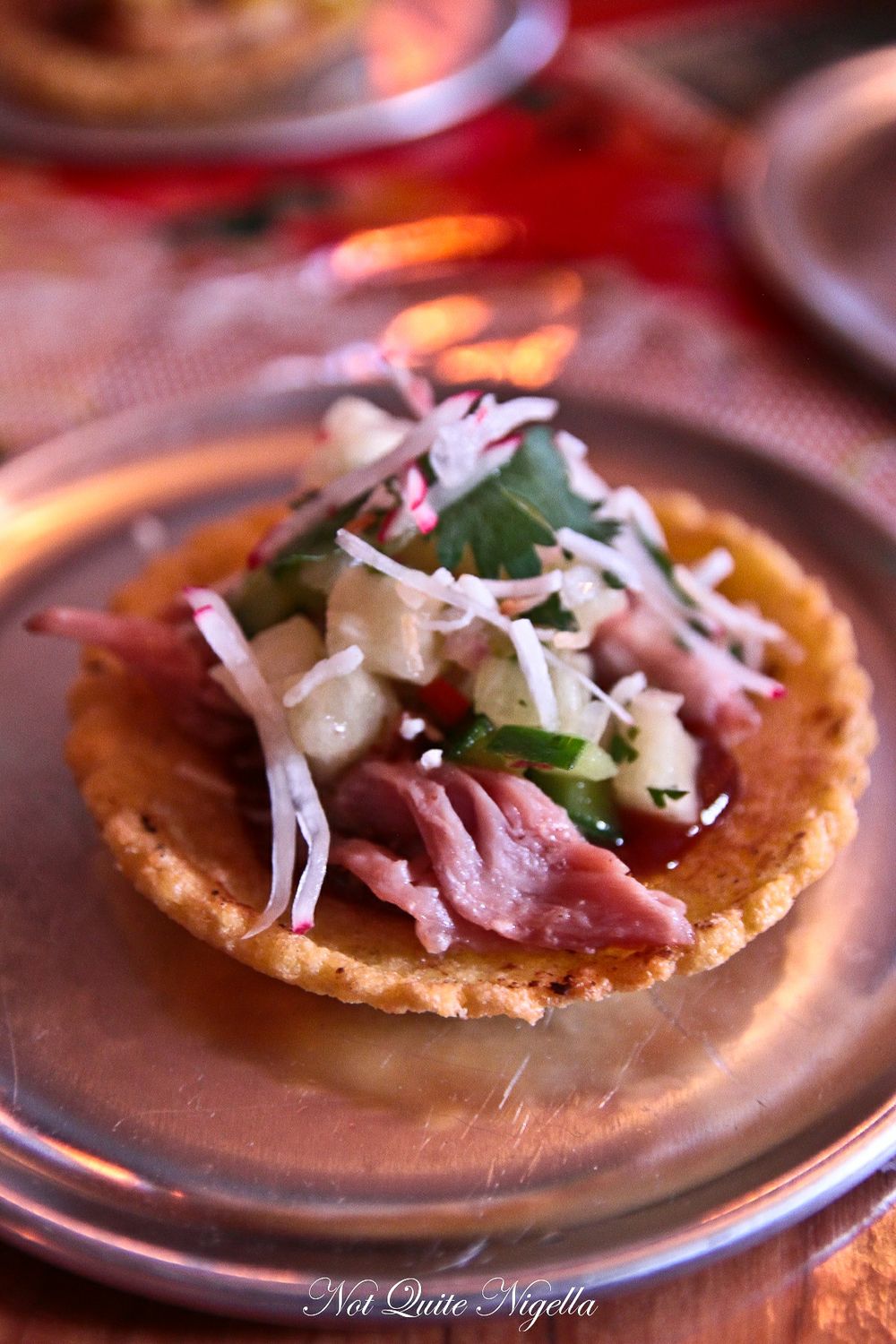 They are both fabulous, the bammie underneath sturdy enough to hold it steady. I prefer the succulent pulled pork while Louise prefers the prawn and mango although I wouldn't chuck either out of bed. 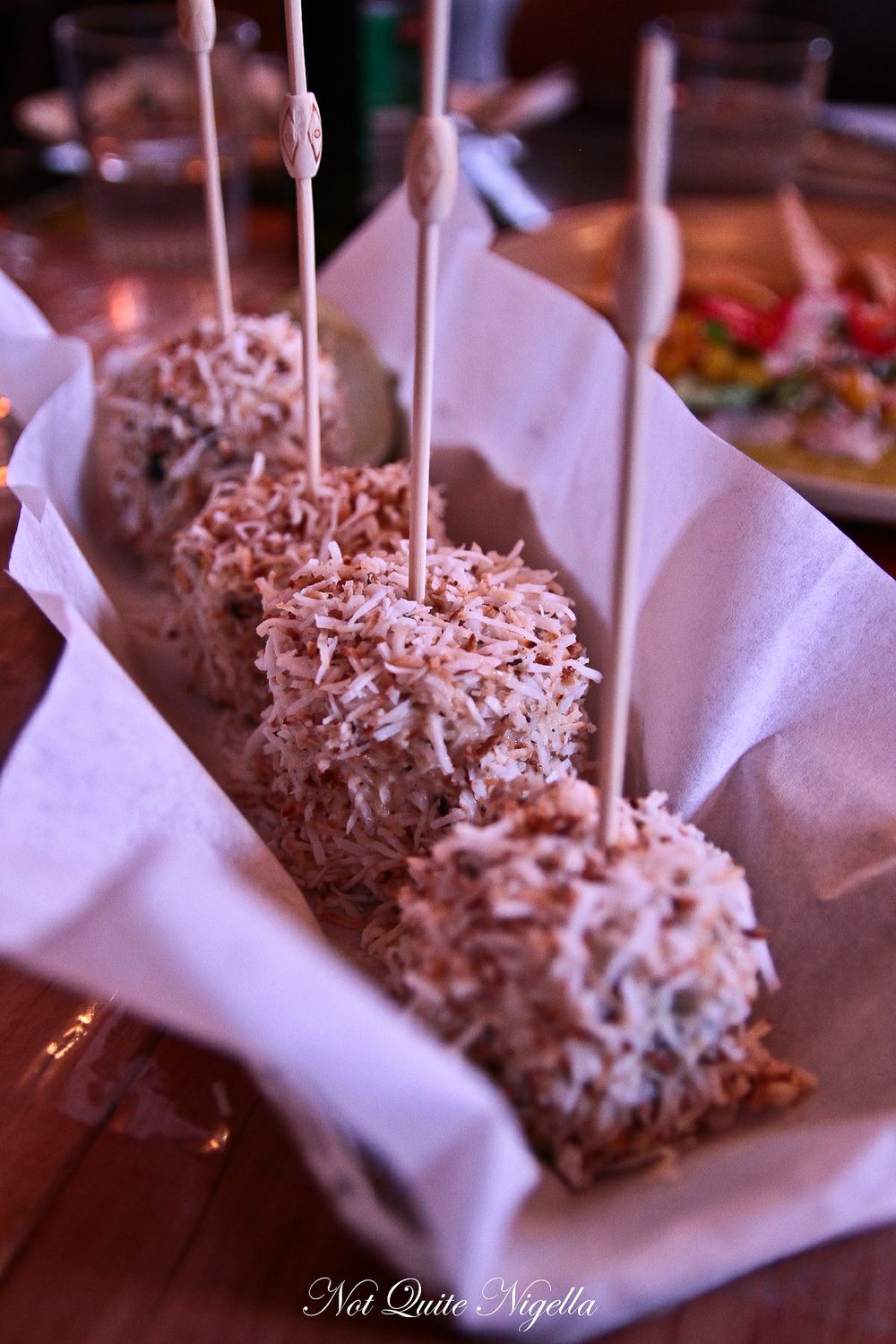 Coming as five to a serve, the BBQ jerk corn is spicy and coated with a jerk mayonnaise and toasted, shredded coconut. There's no way to elegantly eat corn on the corn so it's best tackled by diving in. They're served in a lined egg carton - very cute and environmentally friendly. 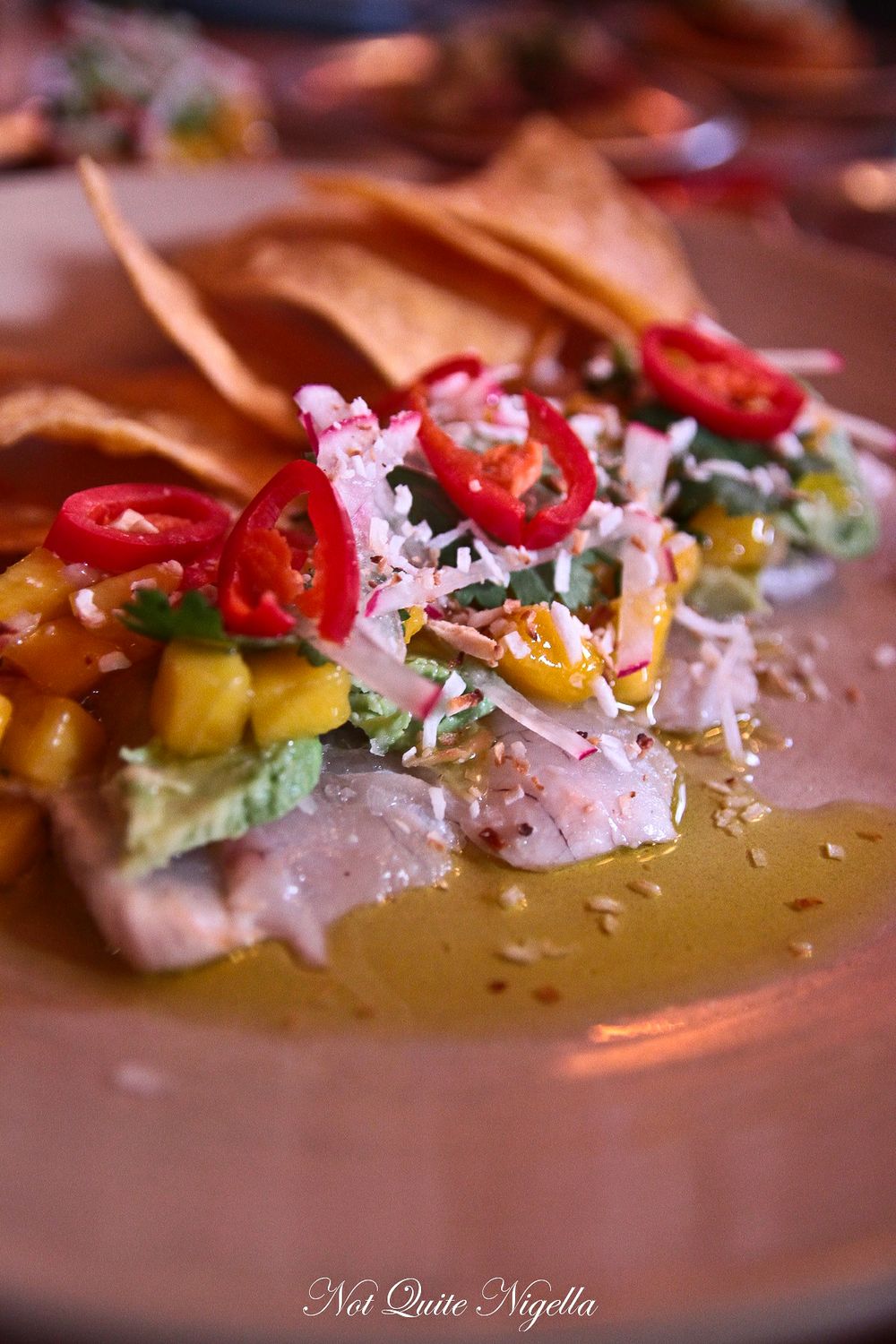 Another one of our favourite dishes was the Hellshire (named after Hellshire Beach in Jamaica which is known for its fish) ceviche. This was snapper fillet topped with avocado, radish, mango and chilli. The balance of flavours (and colours) with this ceviche was perfect and there was a little crunch from the deep fried crackers too. 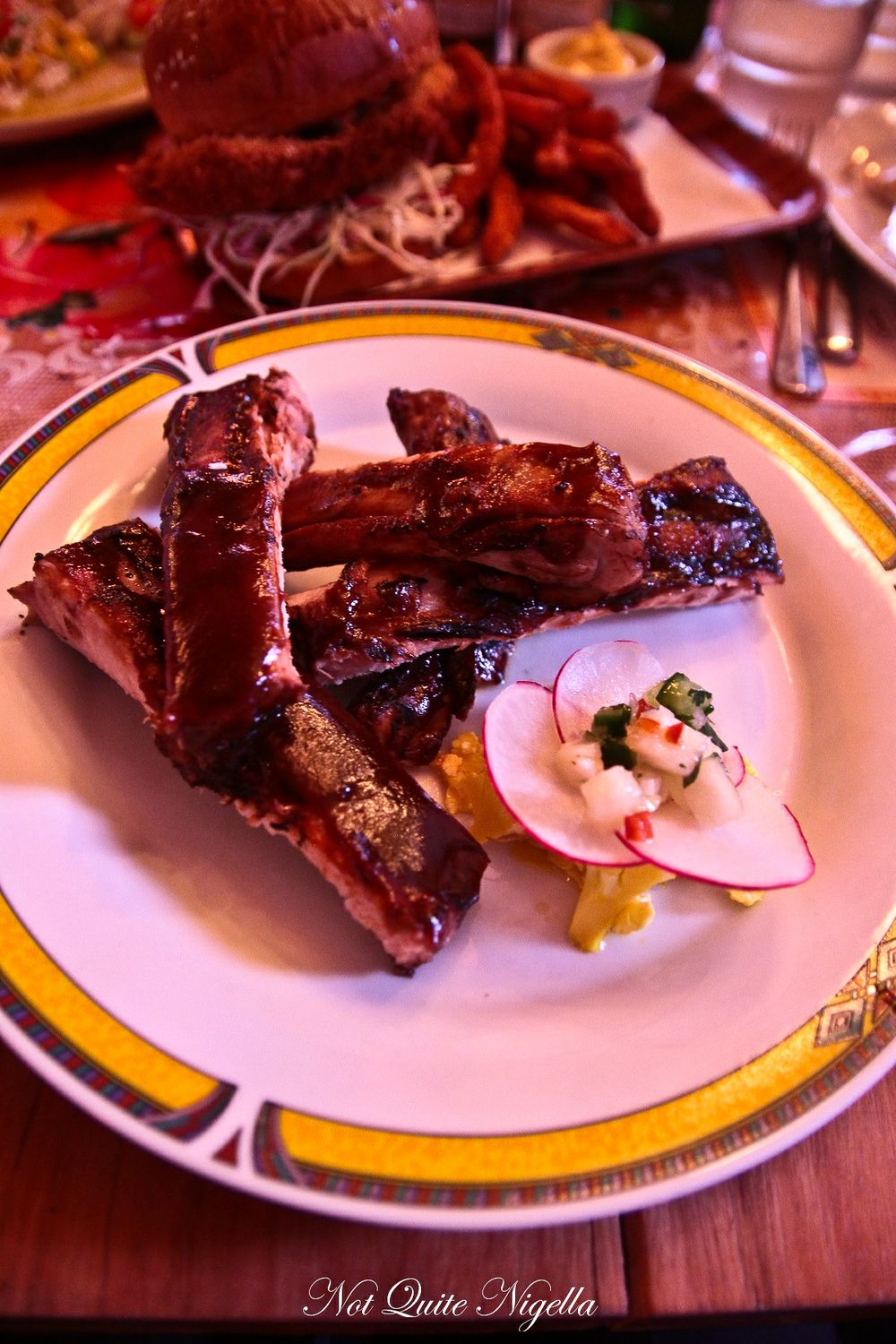 The ribs were a good sized serving with five pieces although there wasn't an especially strong coffee flavour to the ribs. The slow cooked ribs were soft and came off the bone easily and were paired with a small serve of tropical cauliflower and radish. 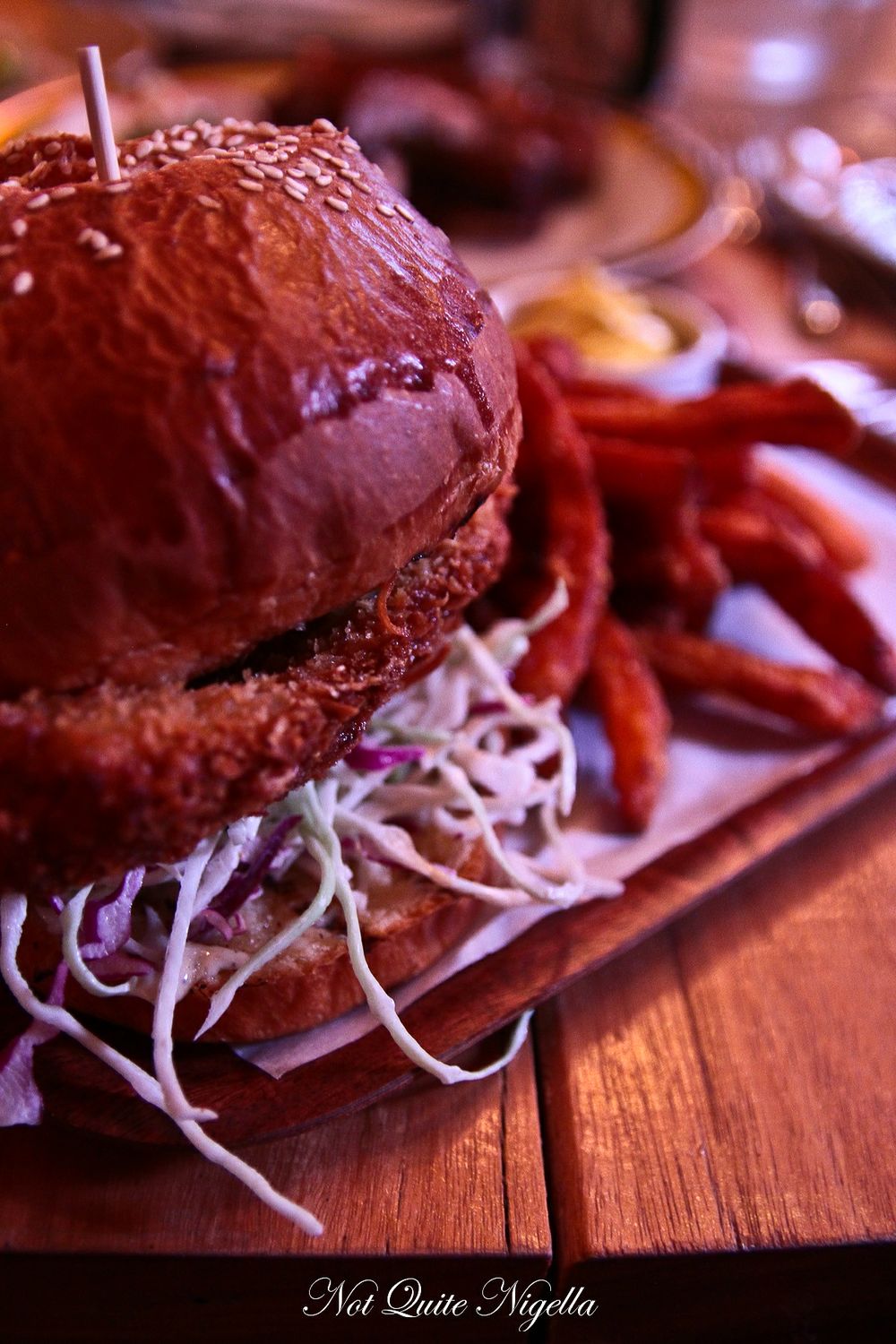 This is where the two sauces that sit on the table come into play. The pork is breaded and deep fried and paired with pineapple salsa and slaw but when you add the sauces, the Pickapepper and the Las'lick jerk sauce (one like a Worcestershire sauce and the other more like a Tabasco), the burger really comes together. It's paired with lovely sweet potato fries which have a soft crunch to them and a spicy mayonnaise. 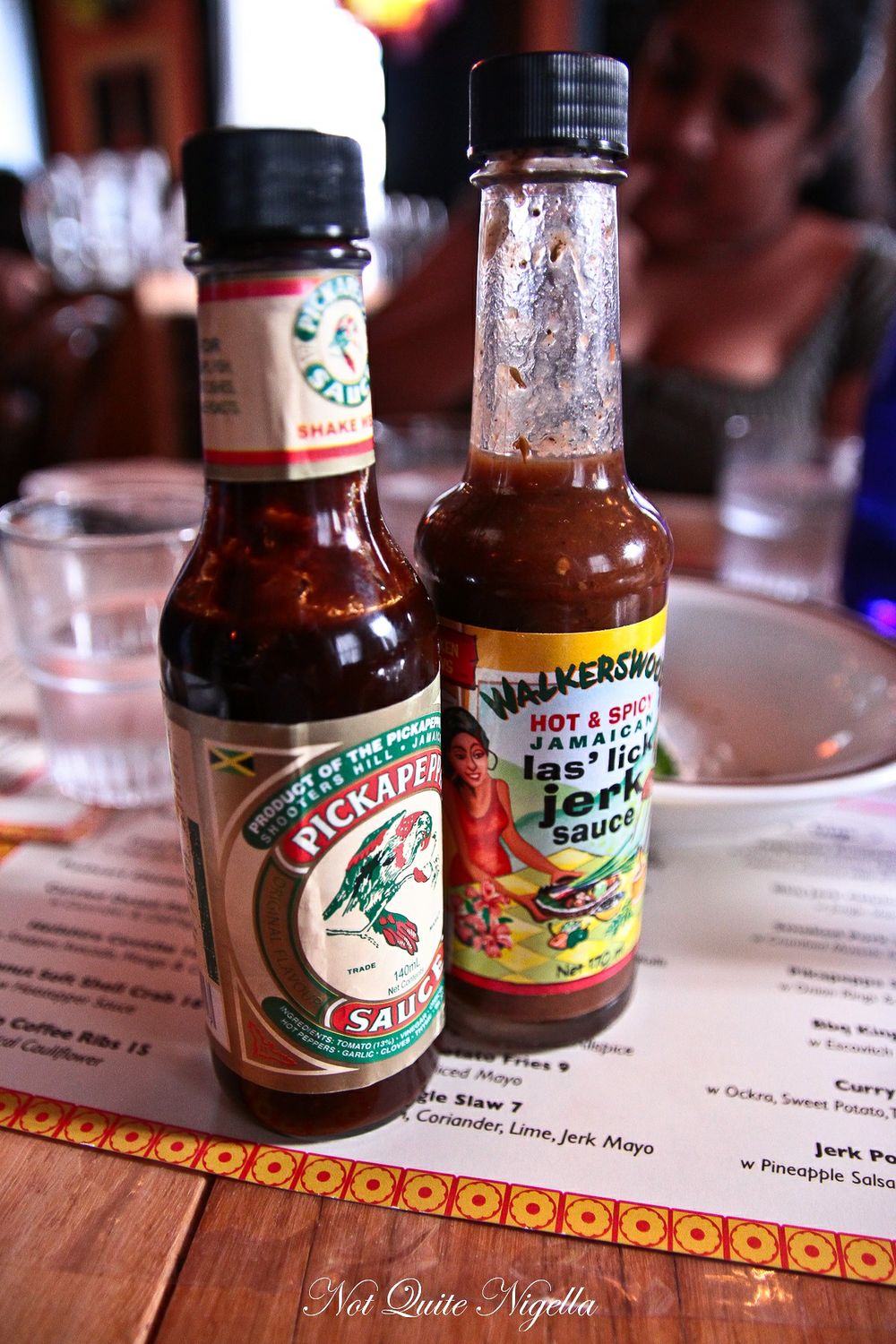 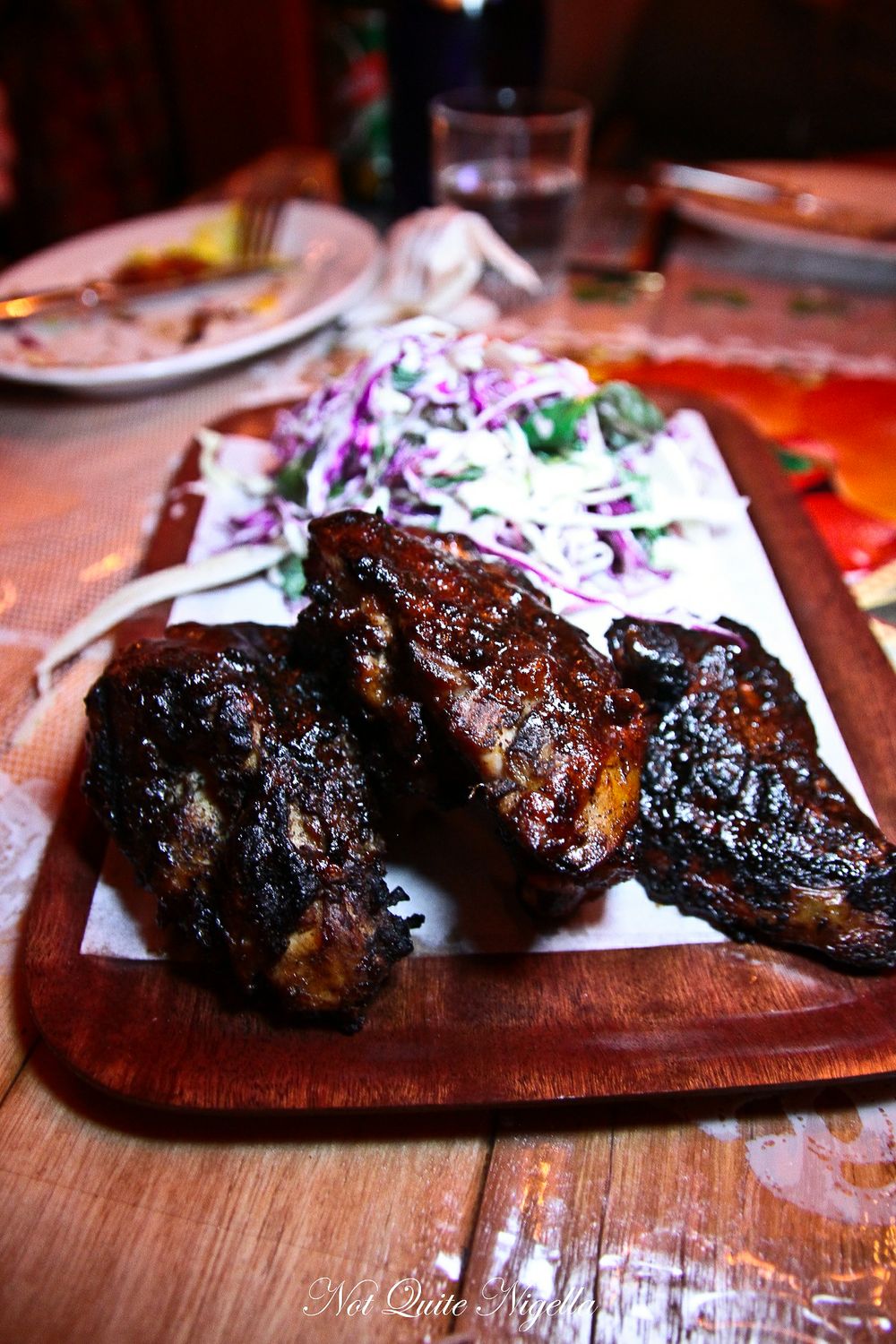 Jerk is a popular treatment of chicken and other meats in Jamaica and it can refer to the Jamaican Jerk seasoning or the method. The serve comes with three large wing pieces and one breast piece. The wings are the pick as they are juicy and the jerk seasoning provides a good level of spice, not too much but enough to provide tingly tastebuds. They're also blackened from the charcoal grill. I found the red cabbage jungle slaw with creamy lime dressing a bit bitter for me to eat by itself but I did like it in the burger with the other flavours. 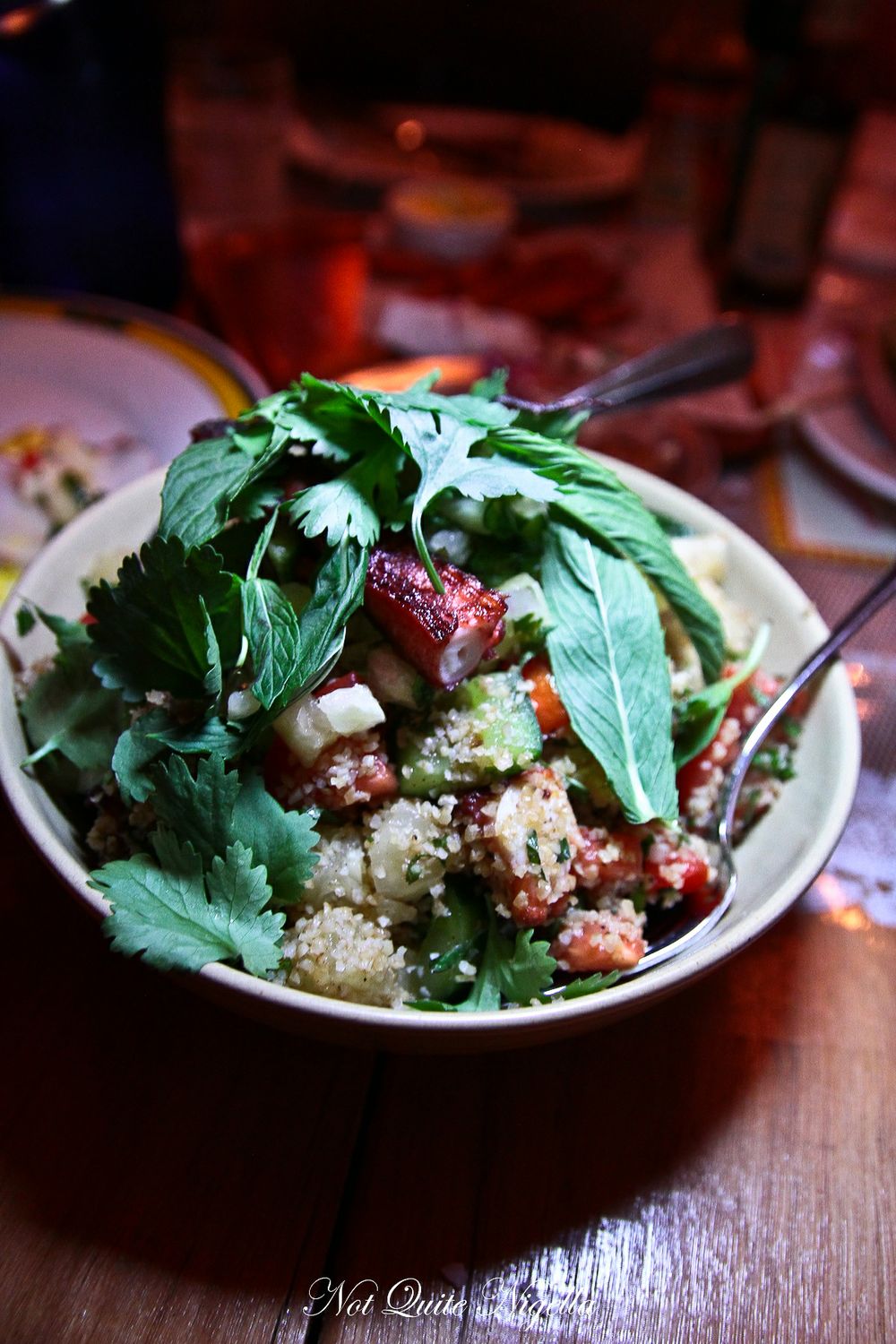 The serving size of this was generous and it came after the rest of the dishes so we were quite full by that stage. Enter Mr NQN who happily swooped on this refreshing salad with cracked wheat, lots of small cubes of pineapple as well as cucumber and tomato. There isn't a great deal of octopus in it though but what there is is tender. 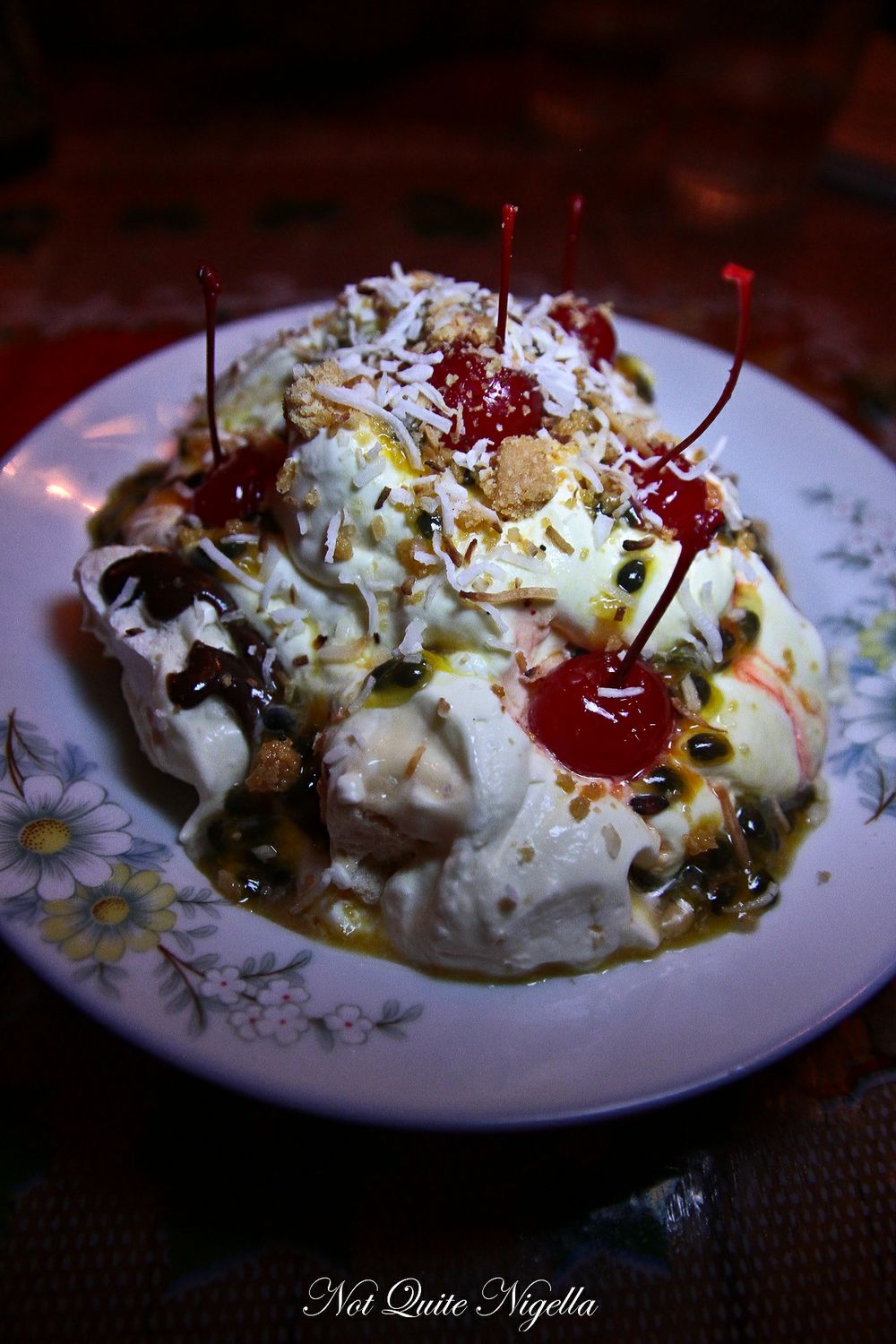 The Brixton Mess is a play on the Eton Mess, Brixton having England's largest Jamaican population. It's got a little bit of everything here with pureed banana cream, rum caramel strong with rum, meringue, toasted coconut, passionfruit, chocolate sauce and maraschino cherries on top. It's a sweet, tangy, rich spoonful in every bite. 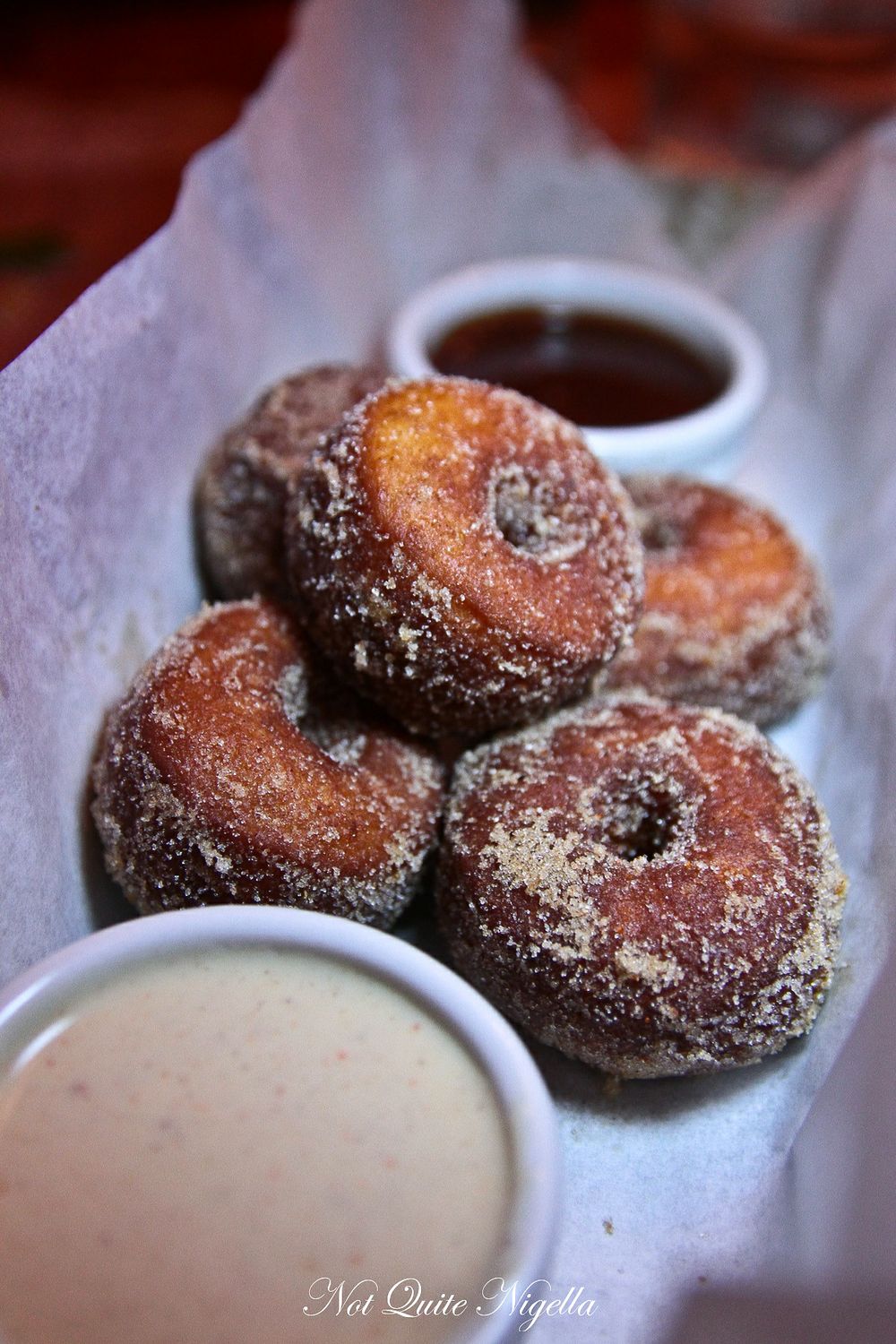 These came five to a serve and were fantastic little donuts served with a small pot of jerk seasoning spiced cream and a chocolate coffee sauce to dip them in. The jerk seasoned custard cream wasn't spicy when eaten with the donuts but when tried by itself, gave it a spicy hit at the end of the palate.

By the time we leave, it's completely full and as we exit, some police come in for a RSA check and to do a head count. Viggo quips "they're probably after the donuts!" 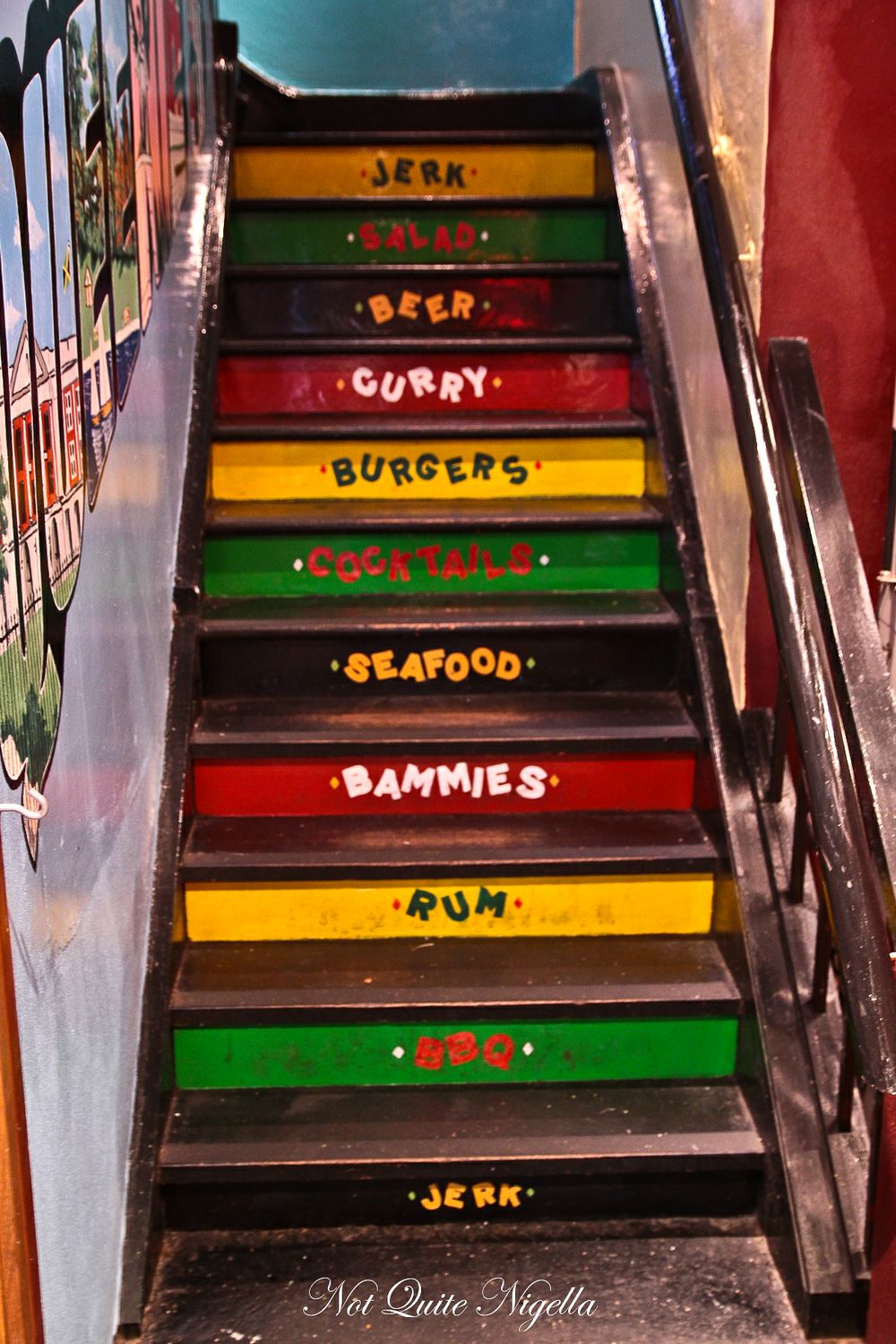 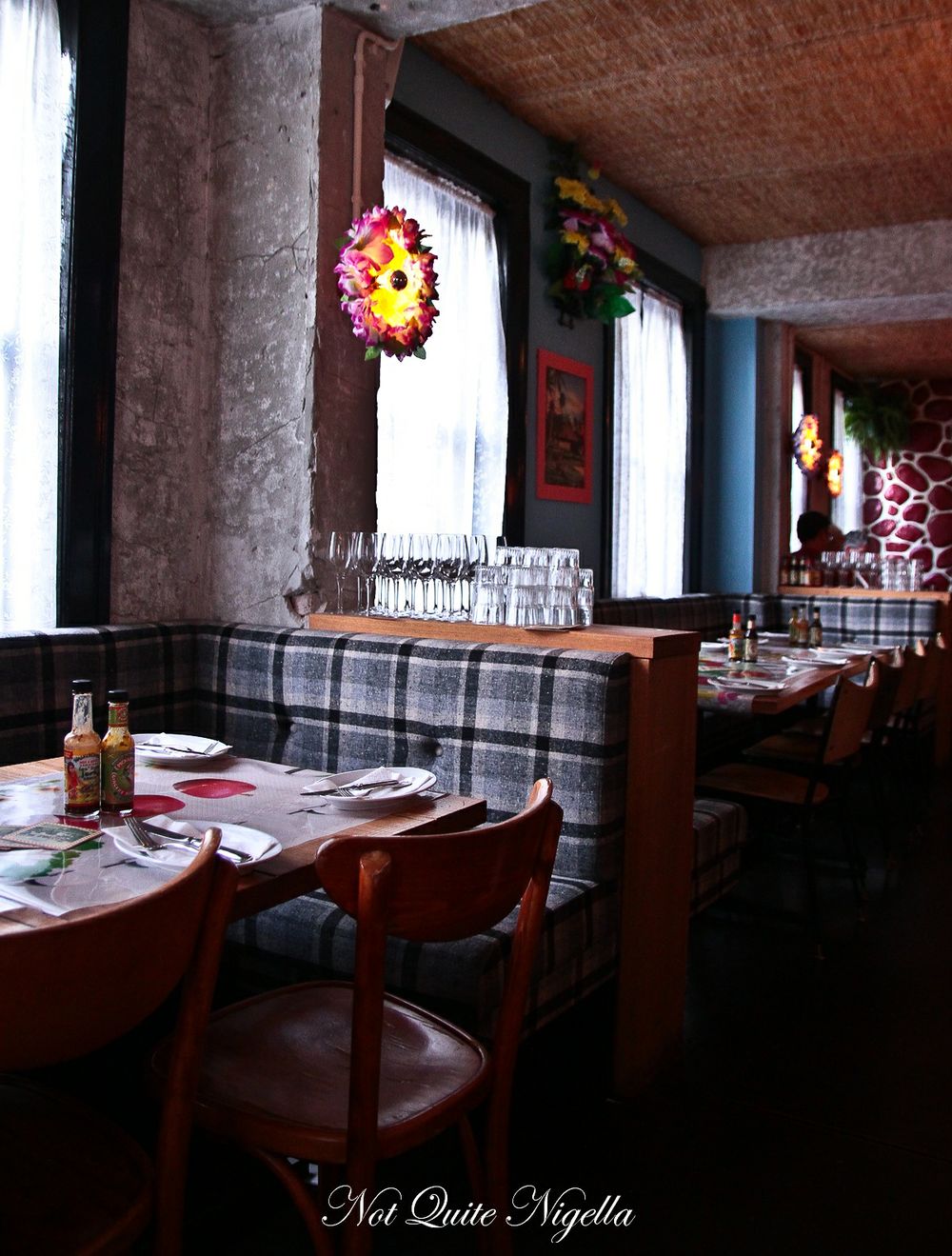