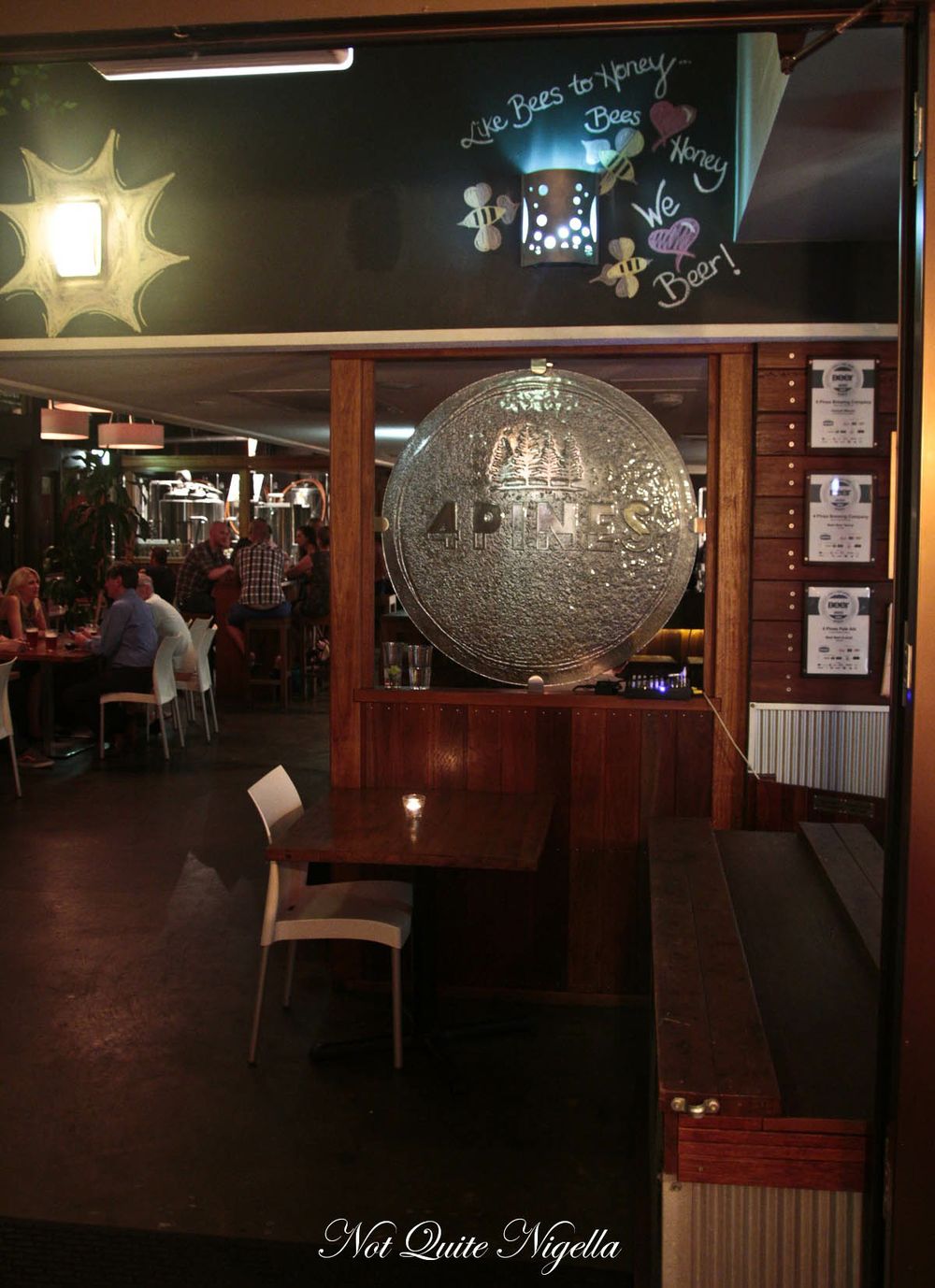 I once asked Mr NQN what as a child he wanted to do when he grew up. He told me in no uncertain terms that he wanted to be an astronaut. I'm not sure what appealed to him about going into outer space, for me, I'm pretty much only venturing out there once I know that it's safe and my space shuttle won't catch fire or tempt another undesirable fate. But as an adult, I think he would be rather excited that in space, you can get beer. 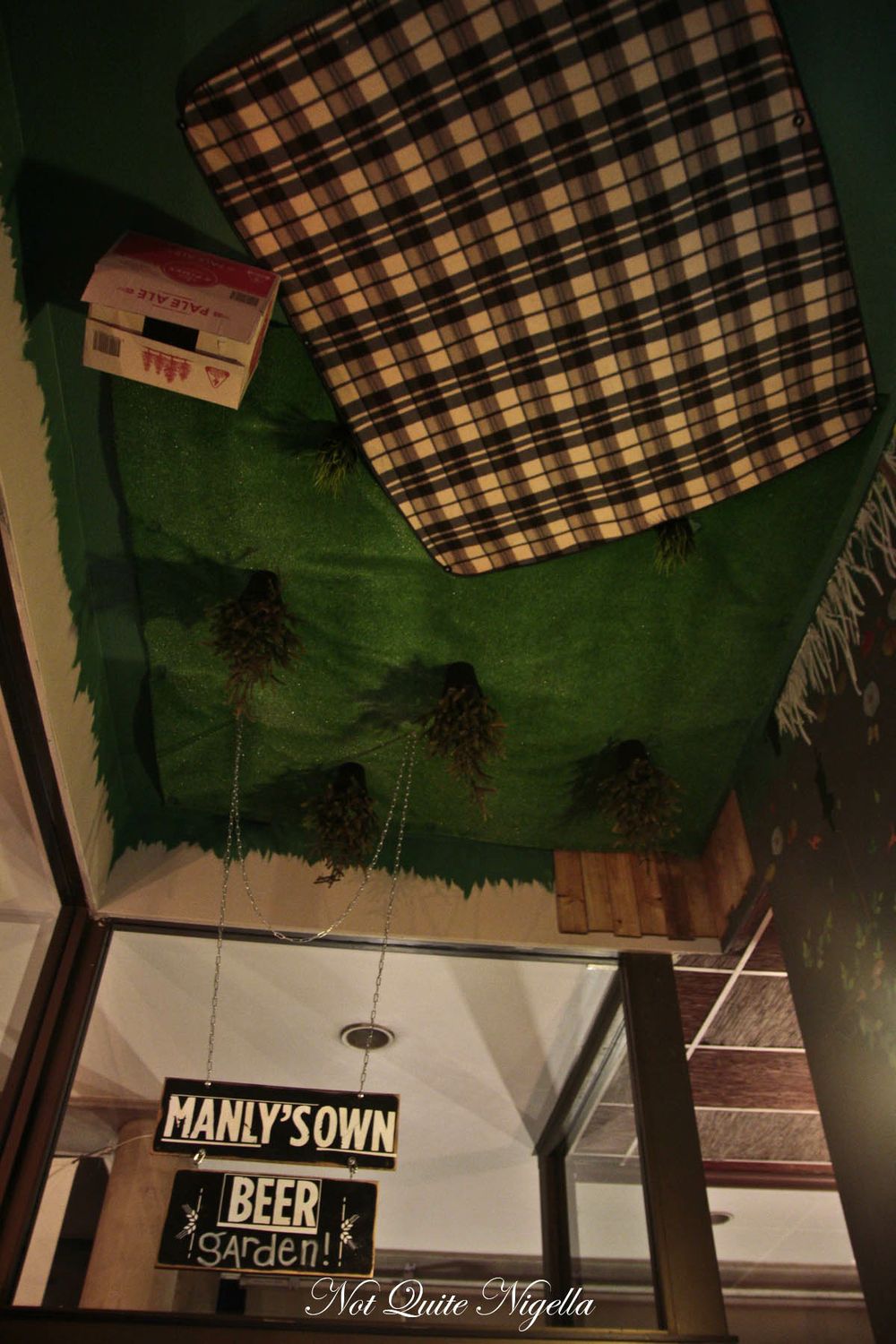 No you're not seeing things, the beer garden is on the ceiling!

We were talking to beer aficionado Viggo. He and Louise live in Manly and he suggested a weeknight meal at 4 Pines. It's on the esplanade right opposite the ferry wharf and in the same building where the restaurant Pink Salt stood (from the tv show that seemed like eons ago, I'm continuing with this space theme ;) ). On site is a brewery and one of the beers created by the 4 Pines crew is a space beer. When Richard Branson started taking flights to outer space via Virgin Galactica, he held a competition to see who could brew a space friendly beer. 4 Pines won the exclusive contract to produce a low carbonation high flavour beer which is now colloquially known as Space Beer but whose official name is Vostok, an Irish style stout. 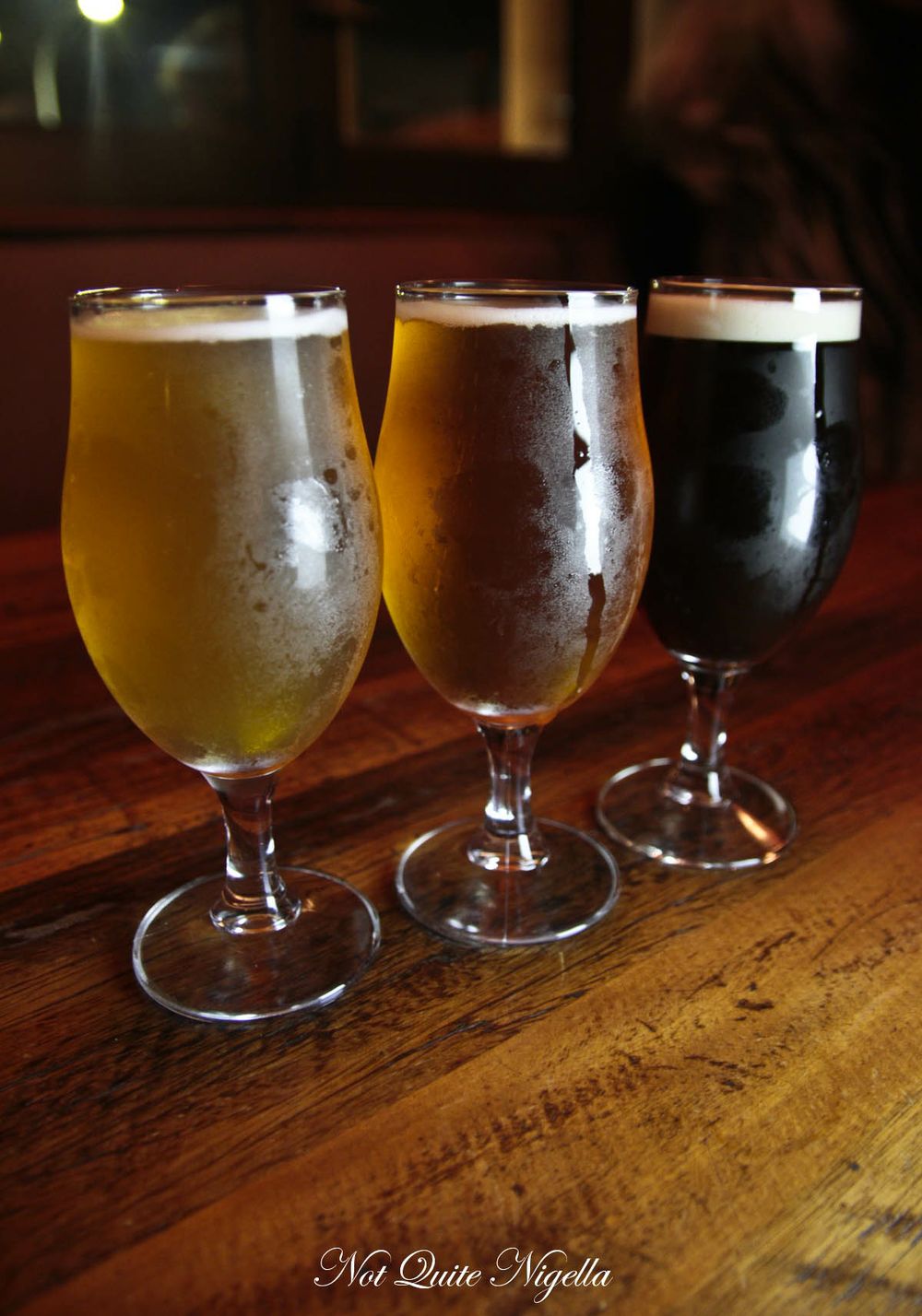 From left to right, Hefeweizen, Kolsch and German Red Ale $9.50 each

There are no bookings here although tables free up fairly quickly and we are seated at an enormous table within a few minutes of arriving. We order drinks and food at the counter and start with the beers. Starting from the lightest in shade the Hefeweizen is sweet with tones of banana, Louise's favourite the Kolsch is more complex while Viggo's choice the German Red Ale was dark and strong. 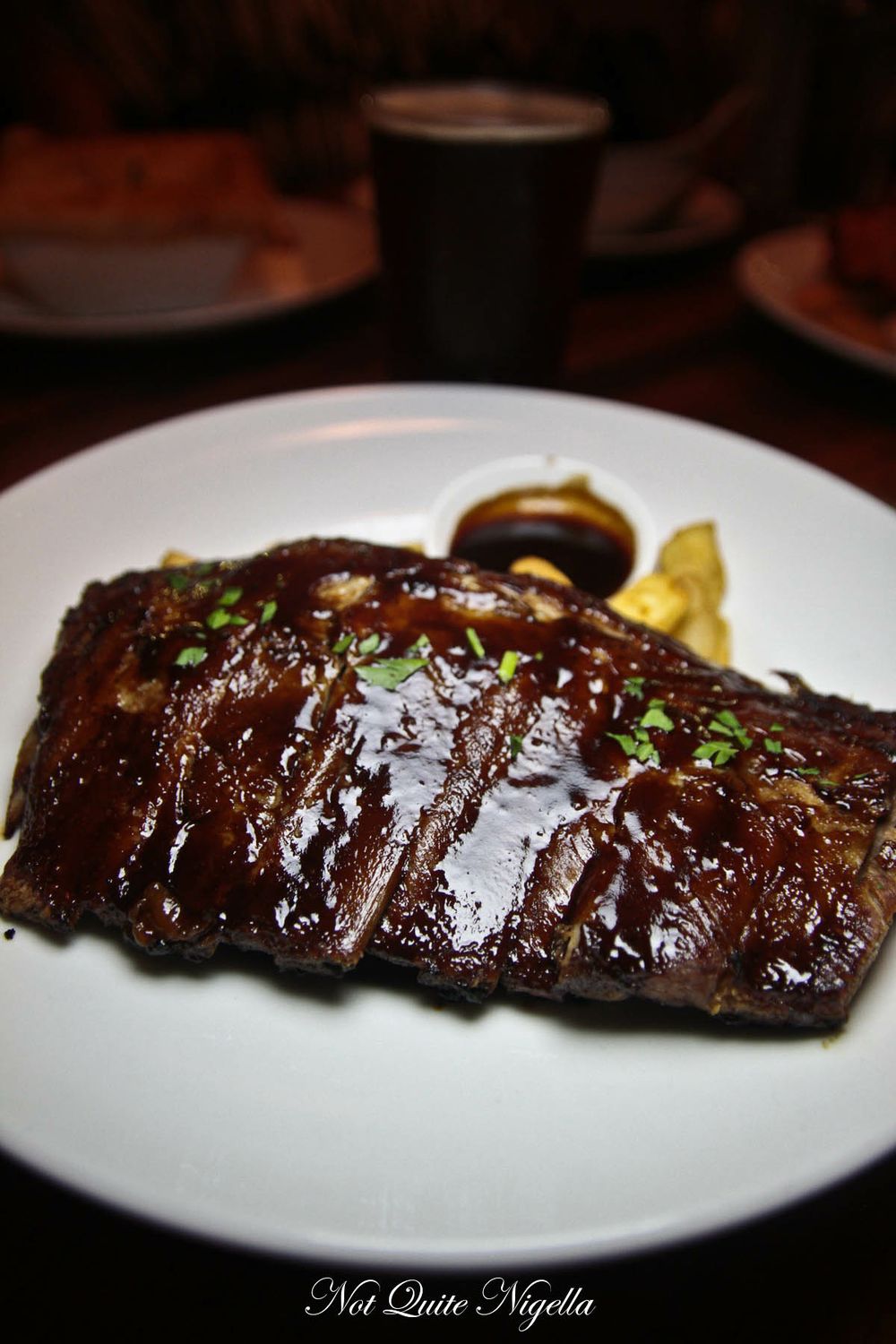 Half rack of pork ribs with chunky chips and pint $25

The food arrives all at once and Wednesday night is ribs night where for $25 you get a half rack of ribs and a pint which is a good deal because a pint is usually $9.50 and the mains are normally around the $22 mark. The ribs are excellent and fall off the bone appealingly. They're coated in a thick barbecue sauce with a little extra to dip into and a layer of potato "chunks" which are straight cut chips with a crumbly crispy outer and a soft inside. 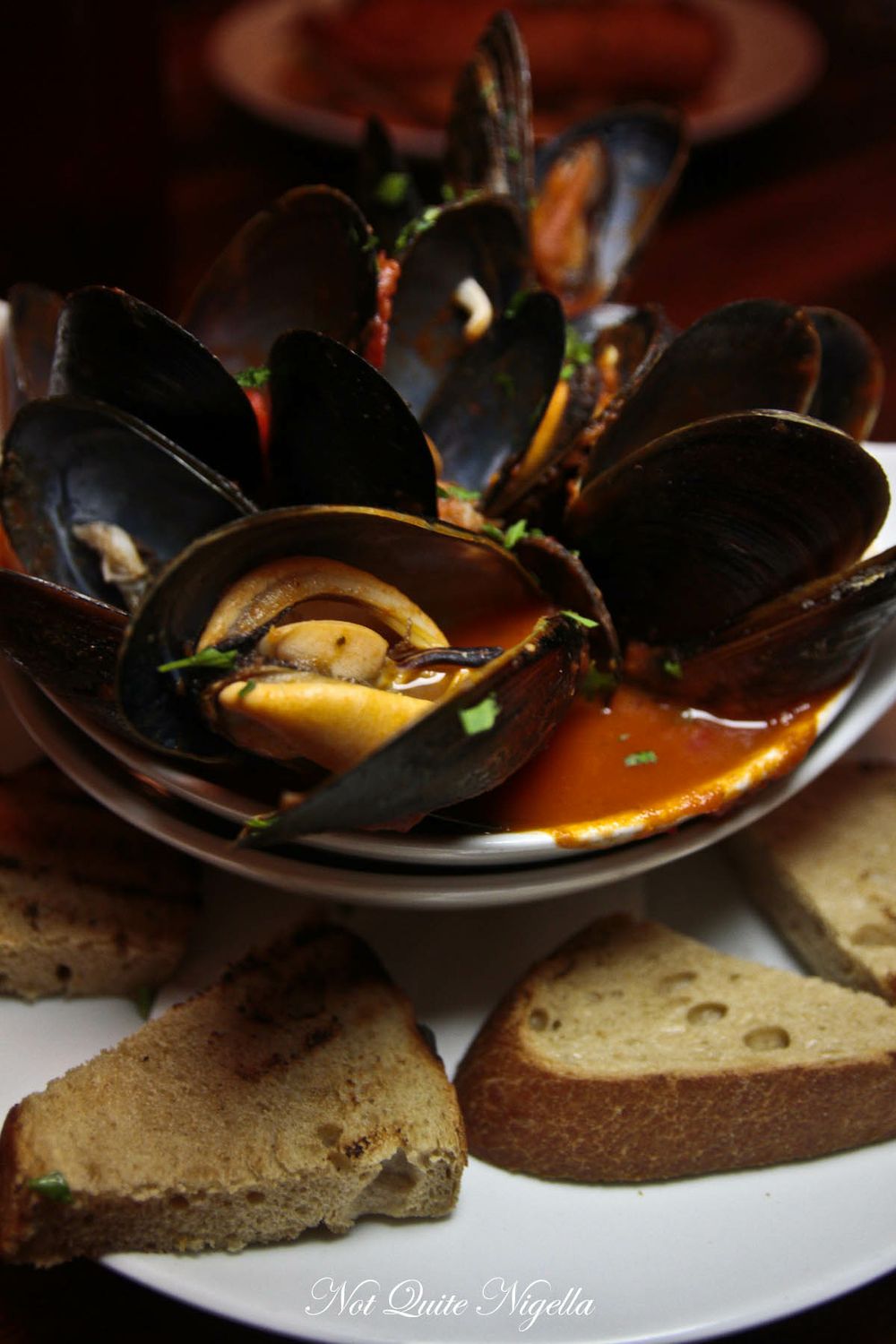 The chilli mussels are my favourite of the mains, the bouillabaisse sauce rich and spicy but the tender mussels are the highlight. It comes with four pieces of dense beer bread which is like a rye bread. It's needed to mop up the generous serve of tomato bouillabaisse. 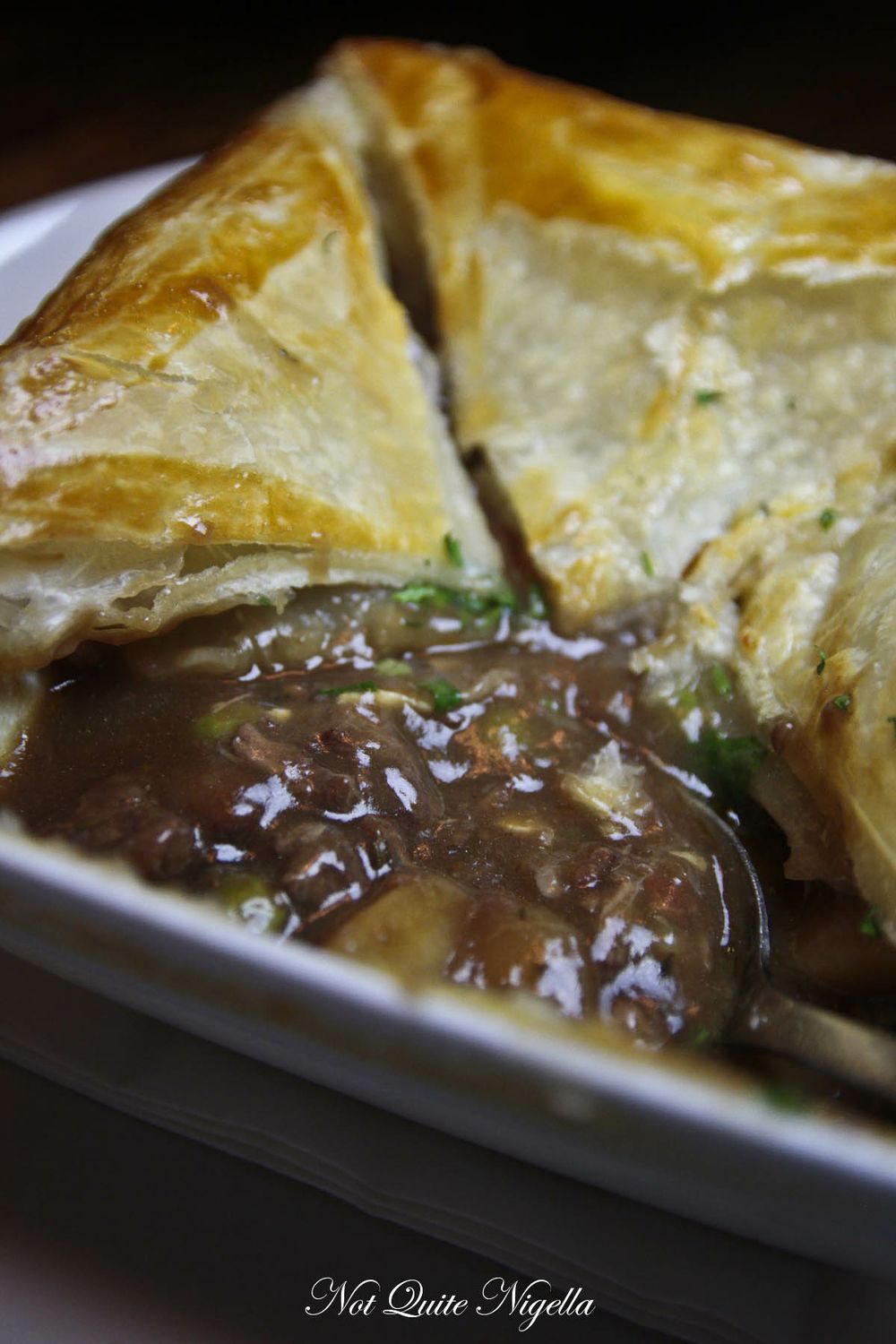 Mr NQN and Viggo were big fans of this beef pie, the flavour of the stout and red wine strong in the thick saucy mixture that had large chunks of potato, peas and carrots along with smaller chunks of beef cooked until soft. All of this sat under a layer of puff pastry. 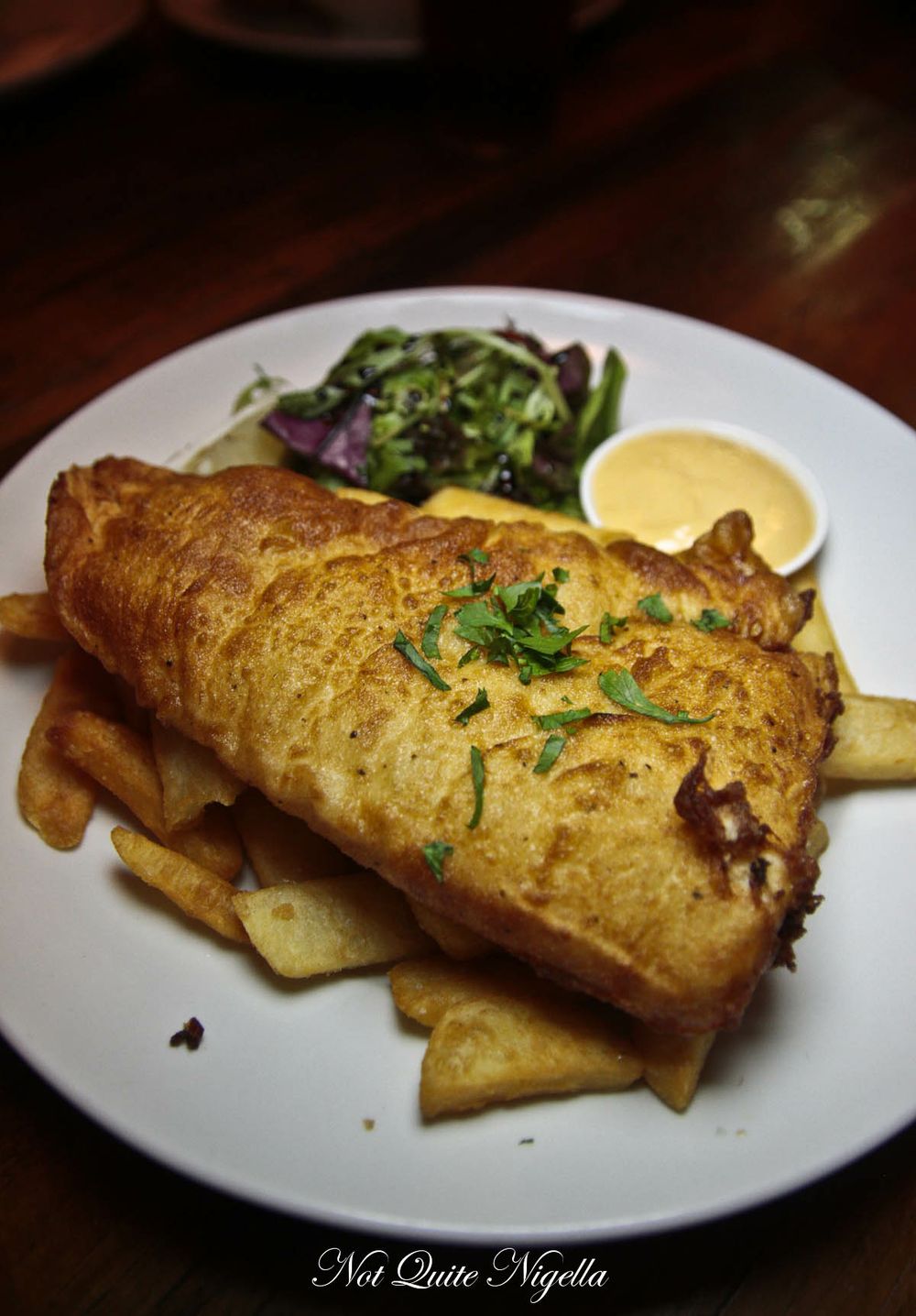 The only main that I wasn't smitten with was the fish and chips. It was an enormous fillet with a soft fleshed fish that fell apart very easily and was a bit difficult to eat with a knife and fork but the batter was just so soft without any crunch at all. The potato chunks that came with it were excellent but the fish was disappointing. 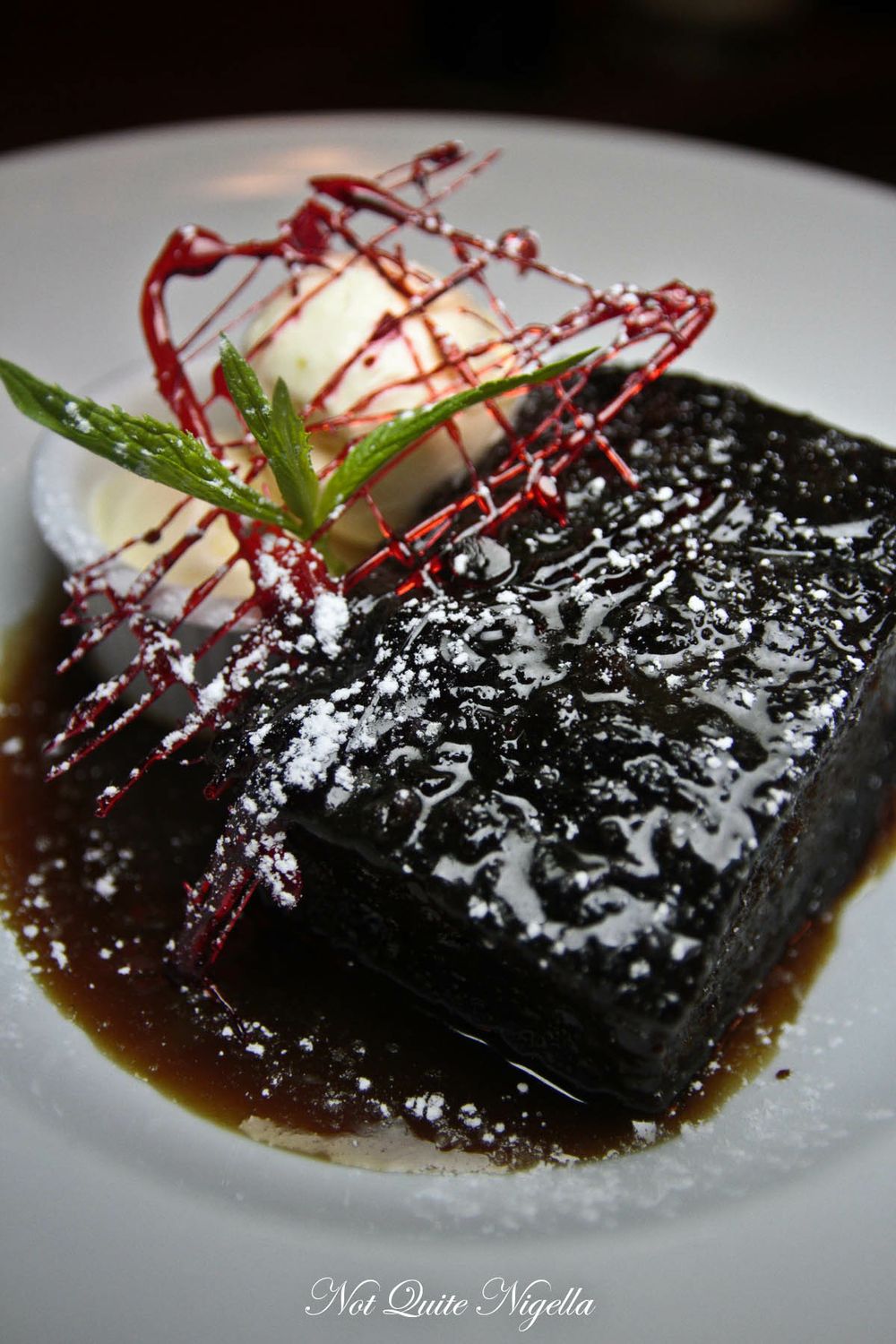 All three desserts contained their beers so we decided to order all three. The sticky date pudding was the table's favourite. It came out as a large, fluffy, high rectangle of pudding and on top of this was a glossy butterscotch sauce with their ESB (Extra Special Bitter) beer which was balanced with the sweetness of the butterscotch and a scoop of vanilla ice cream. 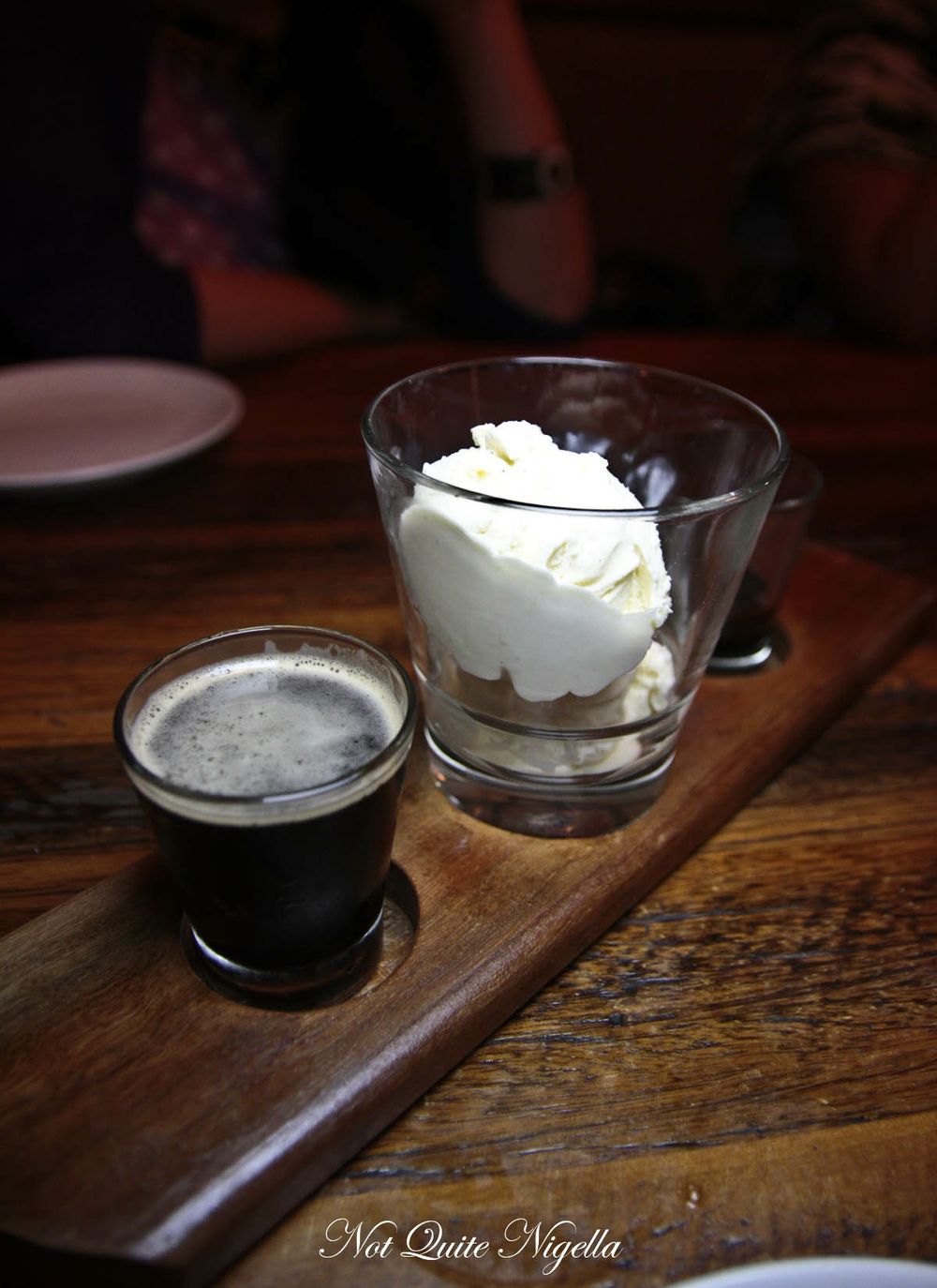 This was an intriguing number-with the coffee essence of their stout and I dug a spoon in and got a bit of vanilla ice cream and the stout. The flavour was at first so strong but then followed quickly with the smooth creamy ice cream and the result was ...Vegemite? Yep Vegemite! 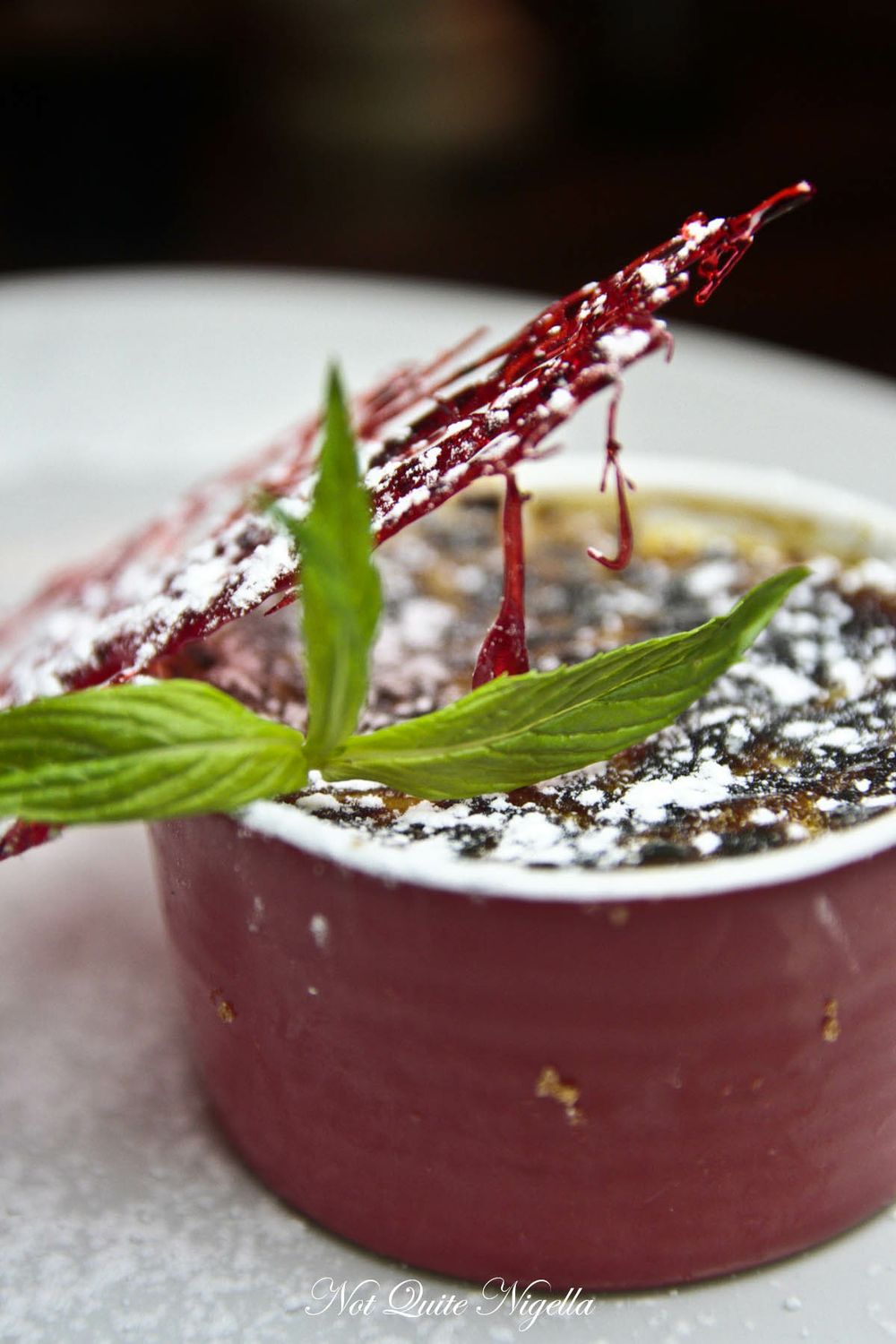 There was a thin crisp layer of brulee topping, almost burnt in places but the creme underneath is almost fluffy in texture and with just the slightest hint of apple cider. The toffee apple part is the red toffee hatchet decoration on top. 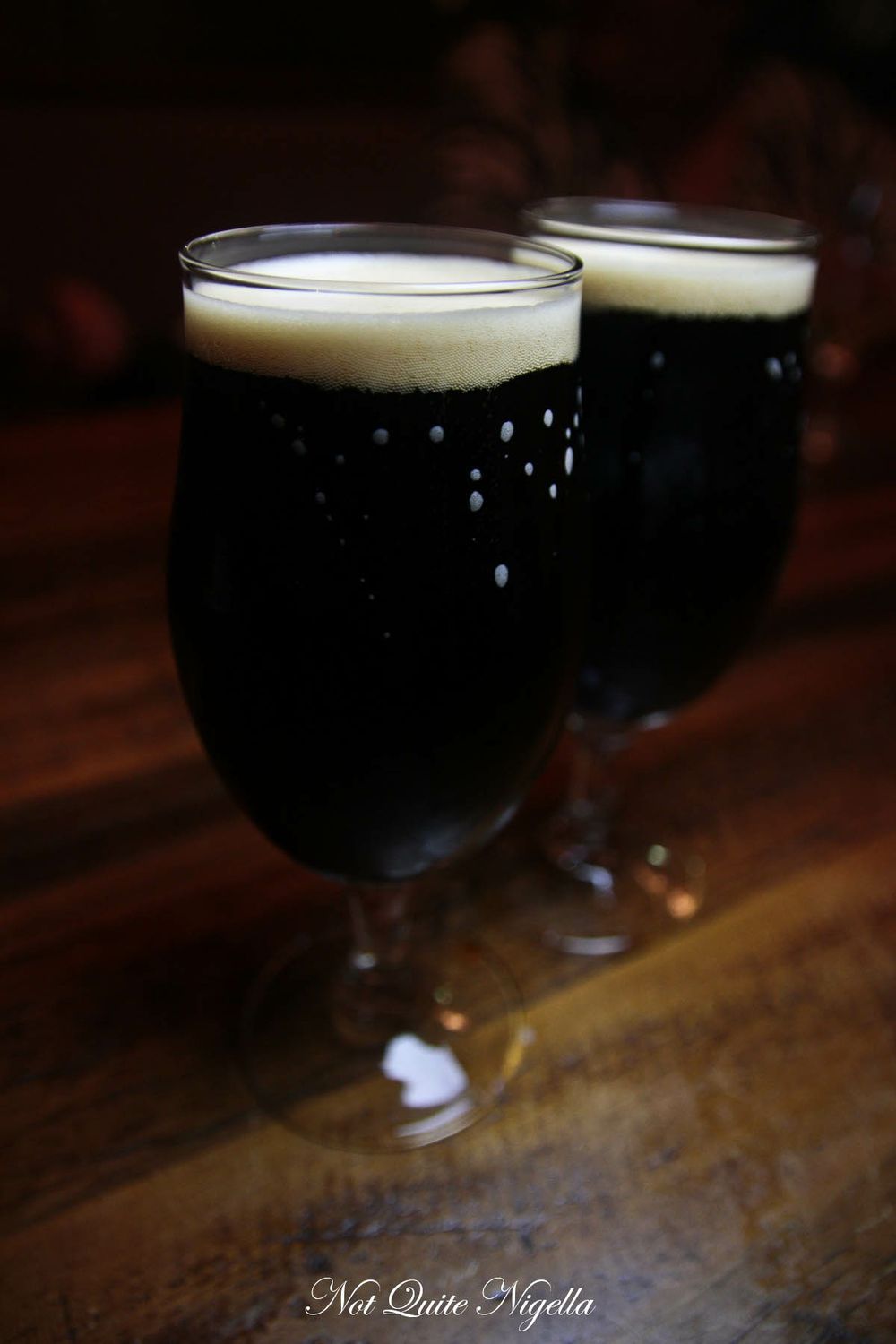 And after all of that talk about Space Beer in the car, we had to try some. Like all of the beers, they all have a distinct identity and clear flavour. This one has minuscule bubbles and is full of flavour. The top layer is as thick as cream. In space, like in airplanes, your sense of taste is depressed so the beer had to be a full flavoured beer, hence the Irish style stout.

On our way out, we pass the rooftop "beer garden" which I'm certain has befuddled many late at night ;)

So tell me Dear Reader, what did you want to grow up to be when you were little? And would you go on a space flight?

And before I forget, today I'm guest posting on the fantastic Y Travel Blog. Caz and Craig Makepeace run this fabulous family friendly travel blog and I created a recipe just for them! It's a dish from Jordan called Mansaf and it's simple and straightforward! I hope you like it :) 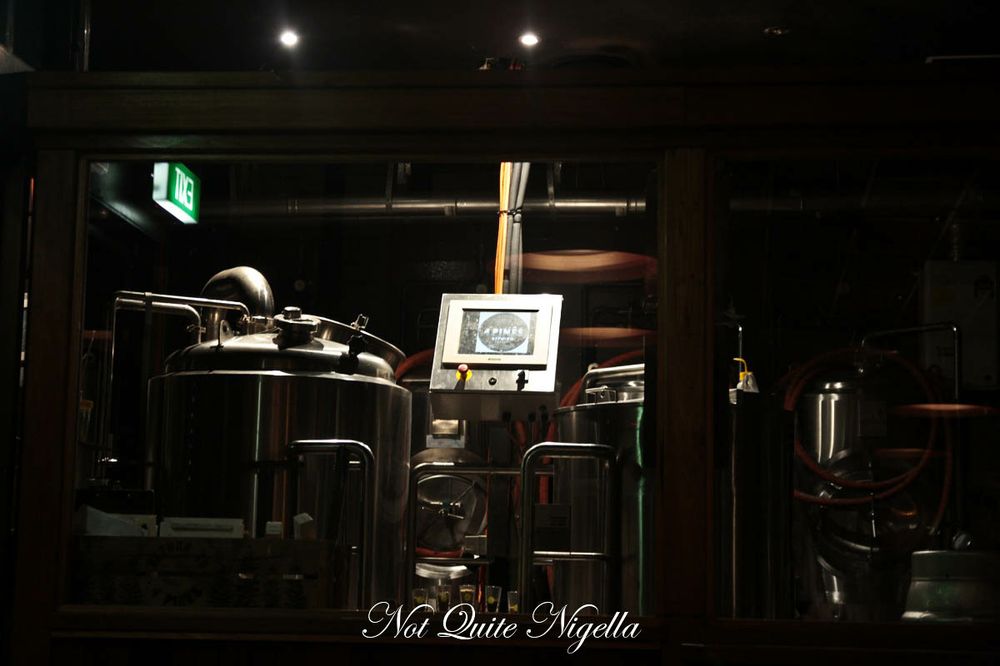 The brewery inside the pub