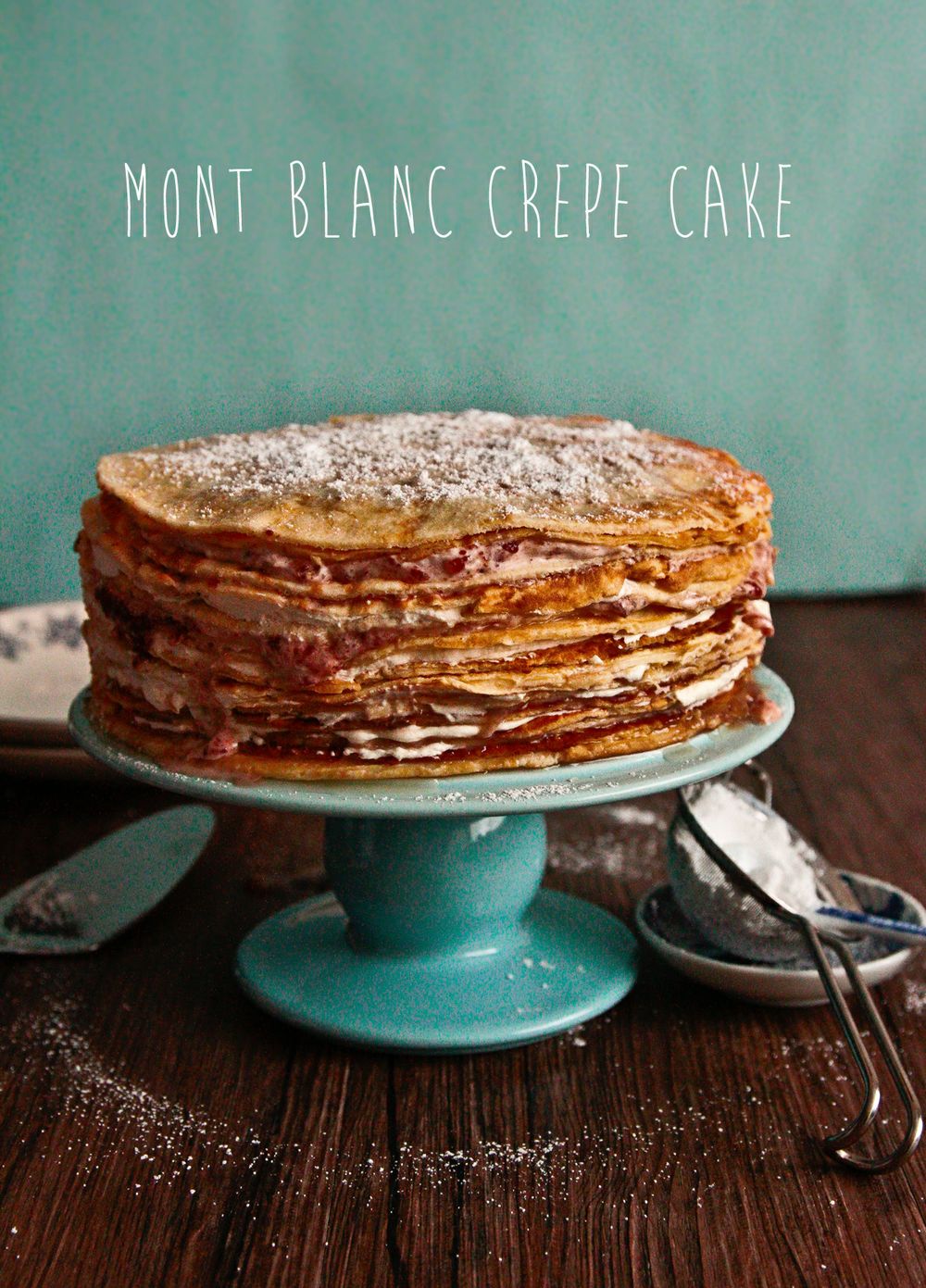 At times, I seem to attract or at least encounter some truly unique people. Once upon some time ago, I met a travel writer on an overseas trip. We were told that she was joining our group of Australian travel writers for the next few days. My nickname for her was Lady Livinia because quite frankly she spoke like she came straight out of an E.M. Forster novel and half the time when I was in her company, I would bend down under tables to look for a camera. She was writing for one of the biggest society magazines in the U.K. so she insisted that she were treated as rather special.

When introduced to our group of six, she smiled and shook our hands and proclaimed "Oh I won't remember a single on of your names!" which was probably true but didn't require an announcement. Not one person was safe from her sharp tongue and vicious asides delivered with a benign yet slightly menacing smile. She left a trail of destruction of social gaffes and ignorance in her path.  Lady Livinia spent an hour with a medical consultant and after her session was up she thanked him for his time, refused to pay his bill saying that she didn't need his help after all and went on her way leaving a trail of apologetic people aka the escorts behind her.

Later on she found herself in a "charming" village where she spotted a woman in colourful national dress. She called the car to "stop immediately!" and flung herself out of the car and then chased down this poor woman who was walking through her village snapping photographs of her and "yoohoo!-ing" for her to turn around. This was just after she refused to remove her shoes when stepping inside a Buddhist temple and also some time after she requested that someone get her some opium to try. 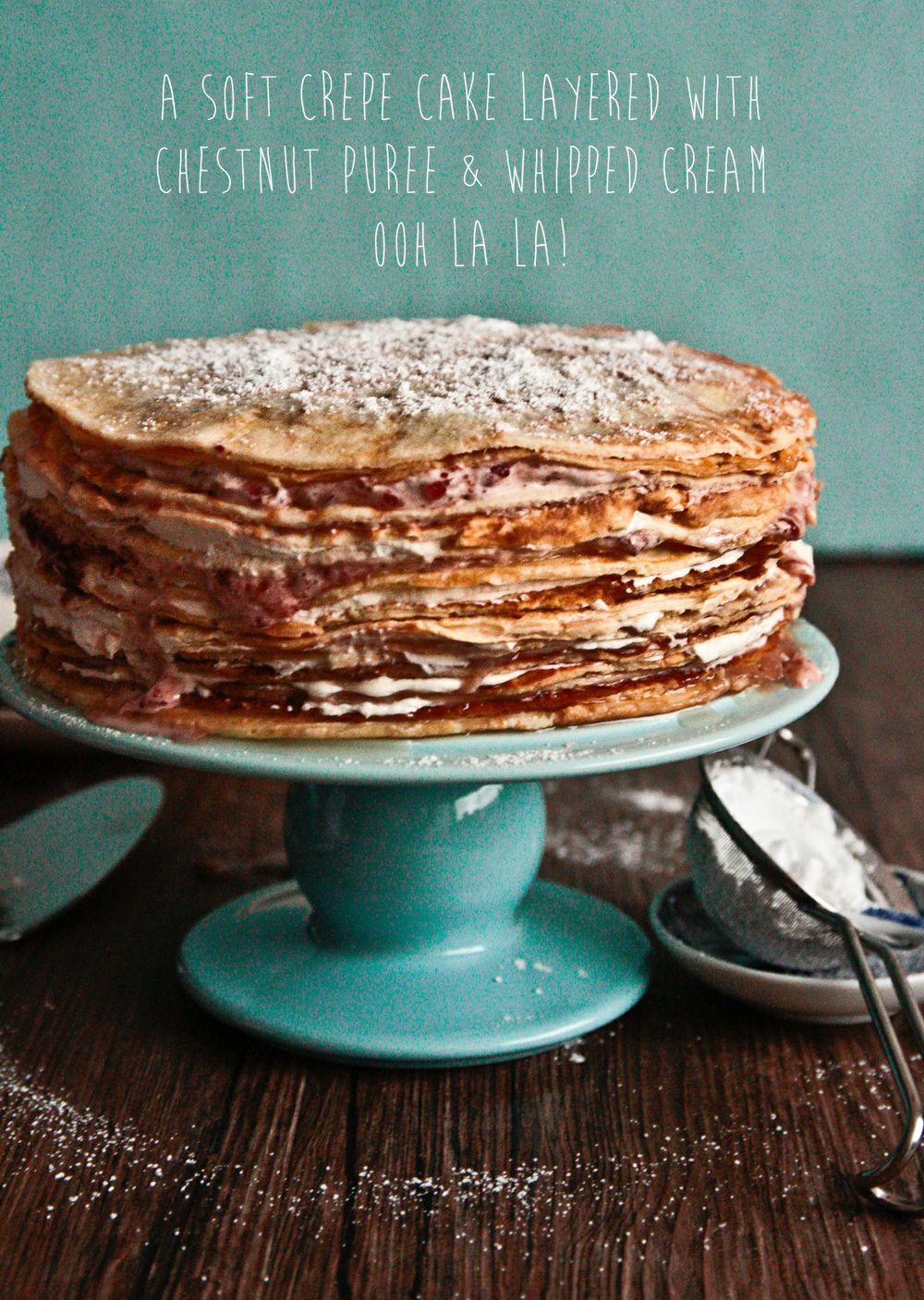 My favourite personal interaction was when we were in a car and she turned to me after regarding our guide as if he were some specimen under a microscope.

"He is rather good looking..." she said before leaning in "well for an ethnic you know..." curling her lip slightly.

"I'm very anxious" she would tell anyone and everyone, perhaps as an explanation as to why she wouldn't stop talking. Every day that passed with her was like watching sap slowly drip down a tree and I'd count the minutes until we were relieved of being in her company. The final day  arrived with her final "gesture" and she leaned into one of her host's ears and whispered:

"I'm afraid that I've had a bit of a problem with the plumbing in the hotel room and I've left you something in the toilet. You won't go in there yourself will you? Send in one of the native staff to clean it. Bye!" Yes, it appeared that the verbal diarrhea was not exclusively verbal in nature. And apparently, it needed to be shared with someone that did not want to know! 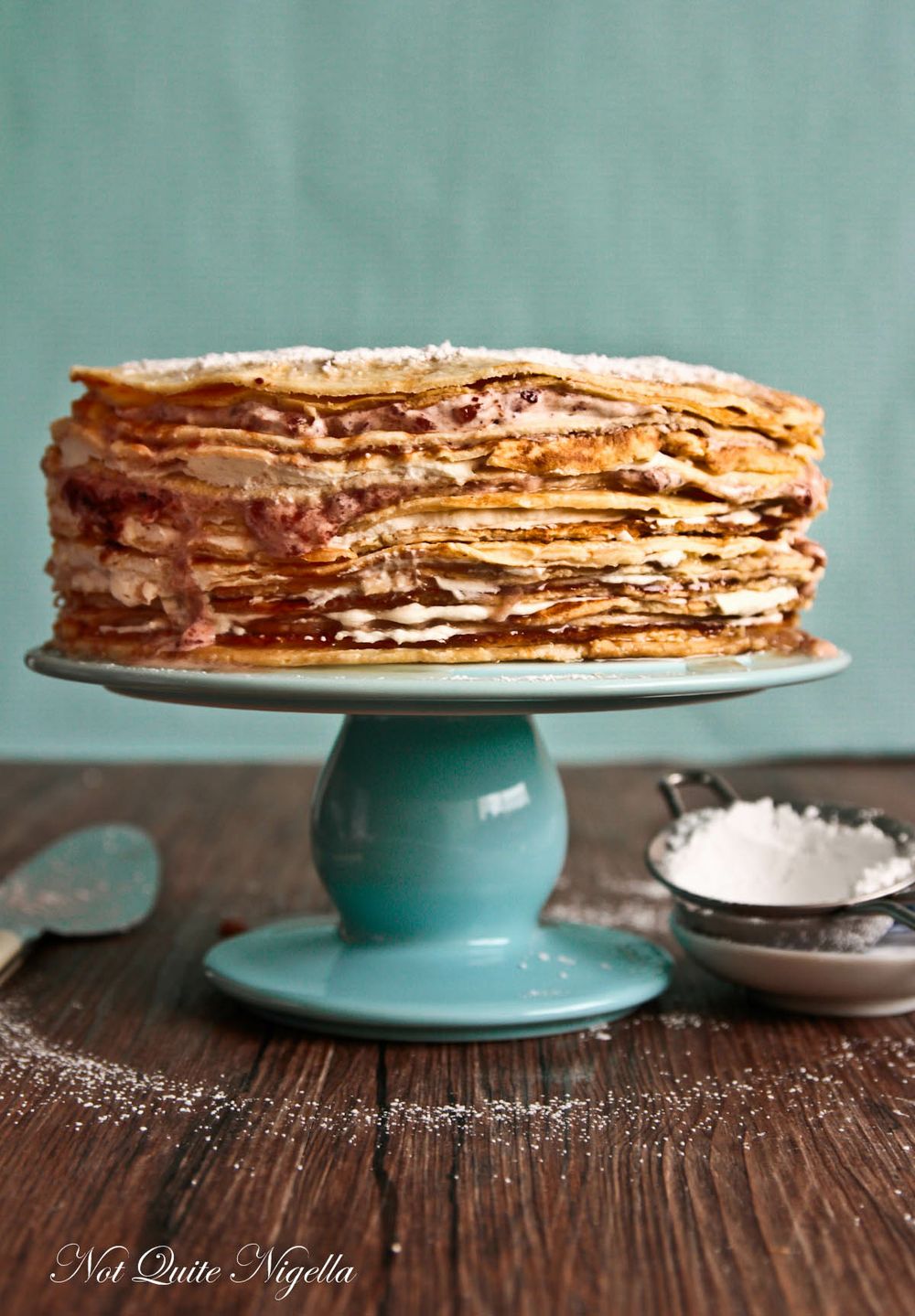 Well here is a recipe that needs to be shared unlike Lady Livinia's bout of oversharing! If you love crepe cakes as much as I do, then this is the cake for you. Several years ago I made a crepe cake and sandwiched it together with jam and cream. I served it to my mother's friends who adored it and after that I promptly lost the recipe. I was recently sent a Tefal Heritage Crepe Pan to try out and I thought that the best way was to try and relive that crepe cake with the shaky memories that clung like persistent cobwebs to my mind.

The crepes were easy to do in the pan-it's a new non stick pan with a low rim so that made it ideal for crepes as it is designed to be. However for a crepe cake you want slightly smaller crepes than the large ones that are filled and folded up or you'll end up going through even more batter than what is specified below. To achieve this, I used the collar from around a springform tin to create a border for the crepe and it worked easily without any fuss. Making the crepes two days ahead of time was a little life saver and on the day that I was to serve it for a double birthday I sandwiched some sweetened chestnut puree and whipped cream between the crepe layers and dusted some icing sugar on top which was very simple as far as decorating went.

It was then served at Mr NQN's sister Araluen and brother in law Laporello's double birthday celebration. Laporello is from Croatia and he was so smitten with this European style cake which contained his beloved chestnut spread that he ate four servings that evening. The cake is fresh and dare I say quite light and made for an interesting alternative cake.

So tell me Dear Reader, what do you do when you meet people like this who are rude or ill mannered? Do you call them on it or keep quiet and try to keep the peace? And do you prefer pancakes or crepes? 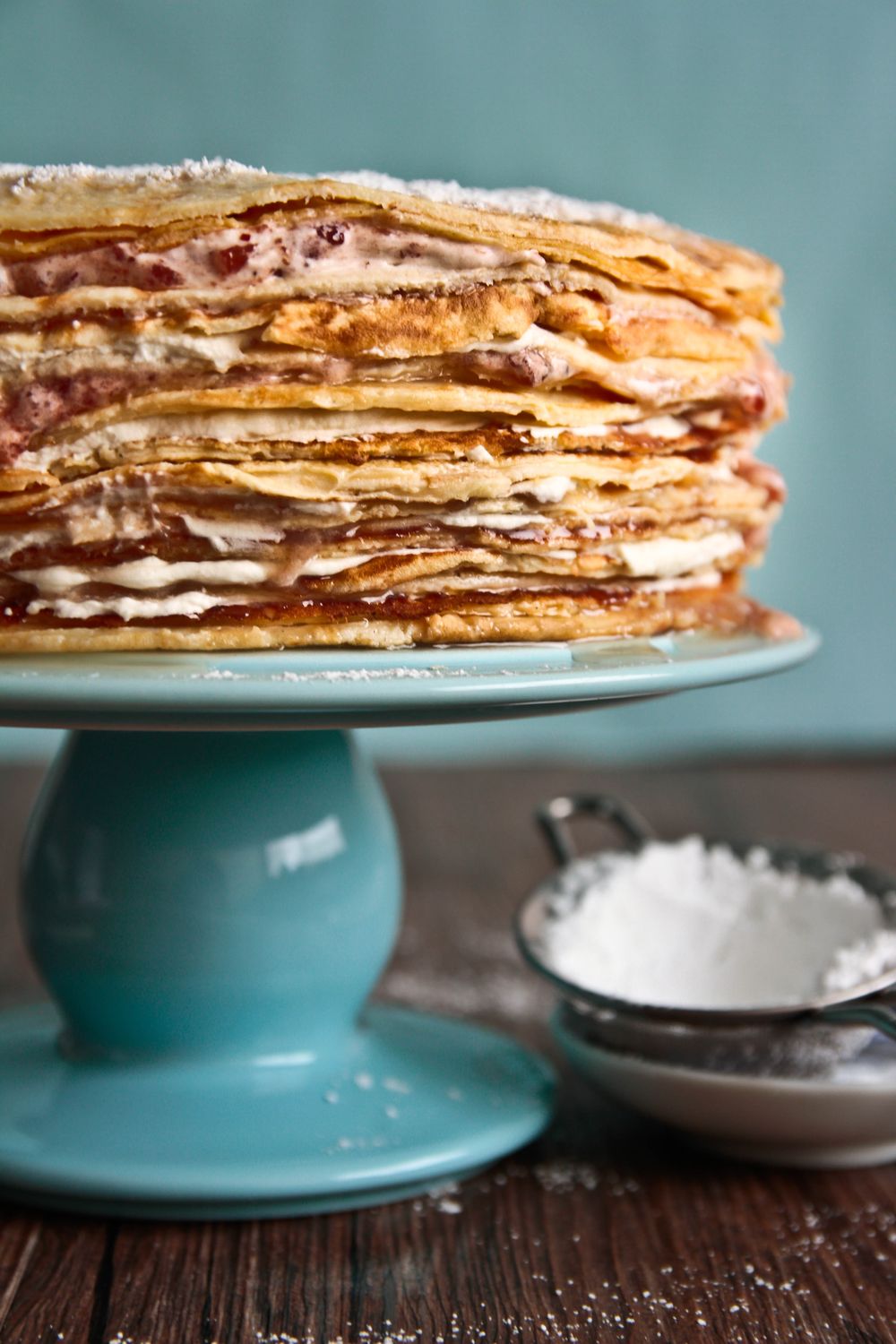 Makes about 30-40 crepes (depending on thickness and diameter)

Tip: You can make the crepes up to two days in advance.

Step 1 - Make the crepe batter first. Place the flour and salt in a large bowl and in the largest jug you have (or a bowl with a spout), whisk the eggs and milk together until combined. 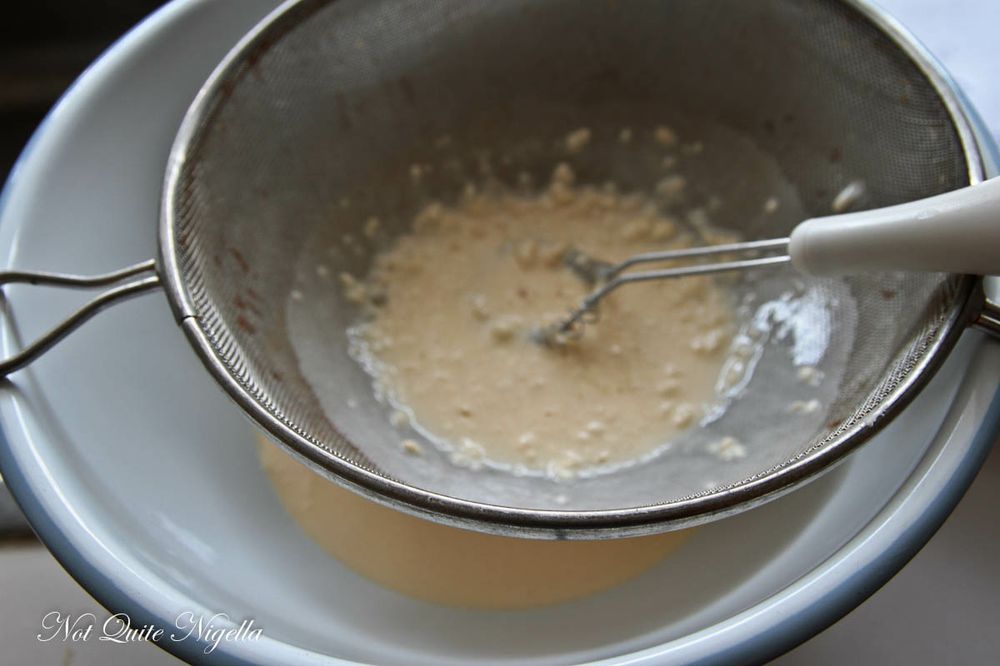 Step 2 - Make a well in the centre and gradually whisk the eggy milk mixture into the flour. Don't worry about any lumps, strain these through a fine sieve. 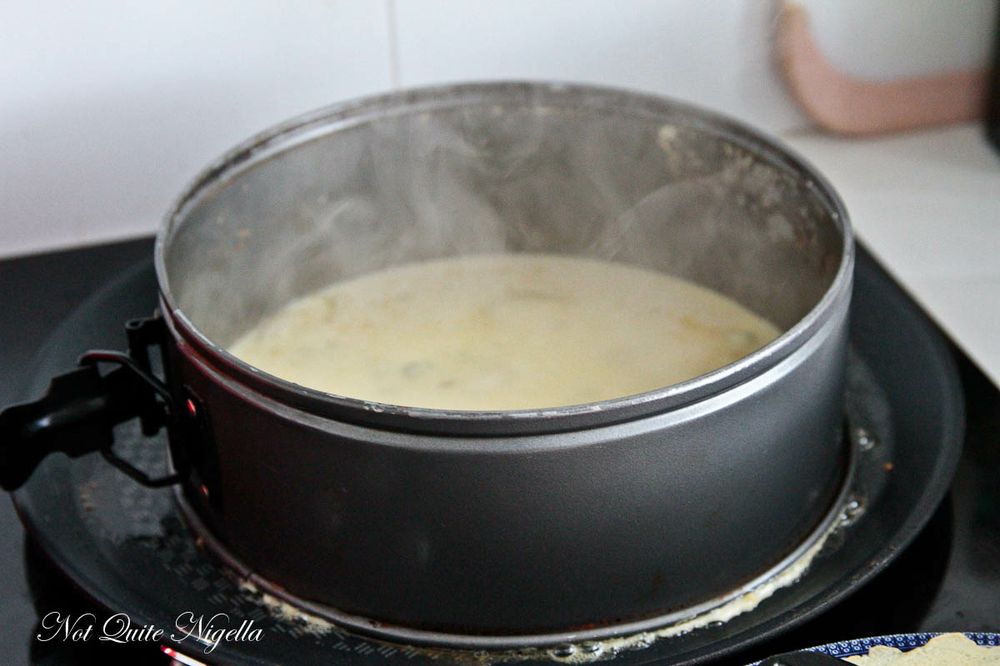 Step 3 - Heat a frypan or a crepe pan on low to medium heat and add a little butter to the pan. Place a 22cm/9 inch collar from a spring form tin on the pan and pour a ladle full of crepe batter-I put in just under a ladleful and tilted the pan as you want the crepes to be thin but also the batter to cover the bottom of the pan. Don't get anxious if there are holes or your crepes aren't perfect-they stack on top of each other. Take a butter knife and trim around the edge of the collar to release it from the cooking batter and remove the collar. When one crepe side is cooked, gently flip it over. Stack the crepes on top of each other. Cover and cool completely. 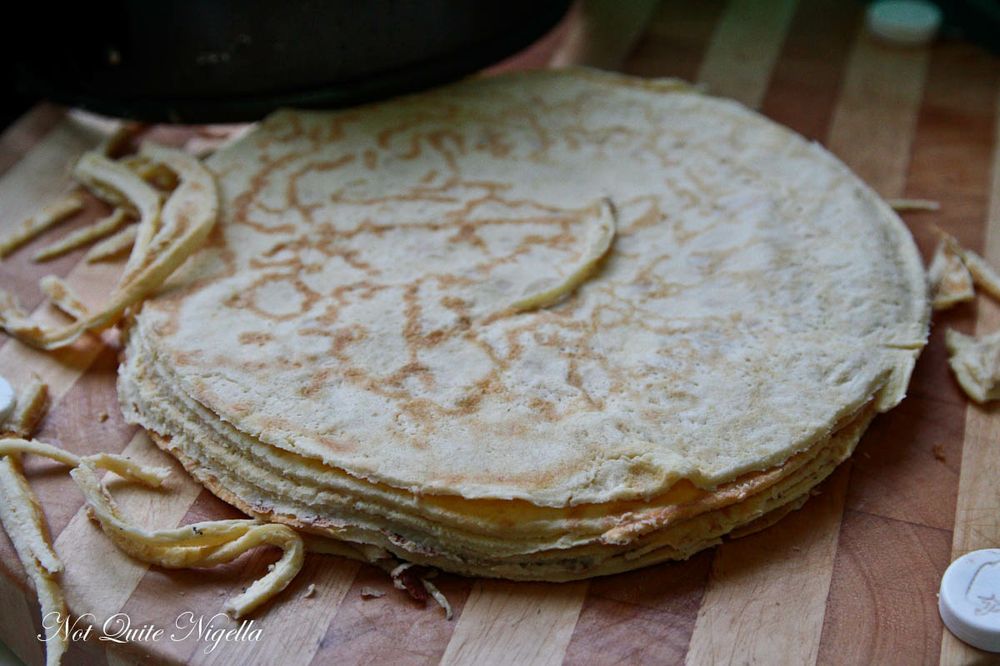 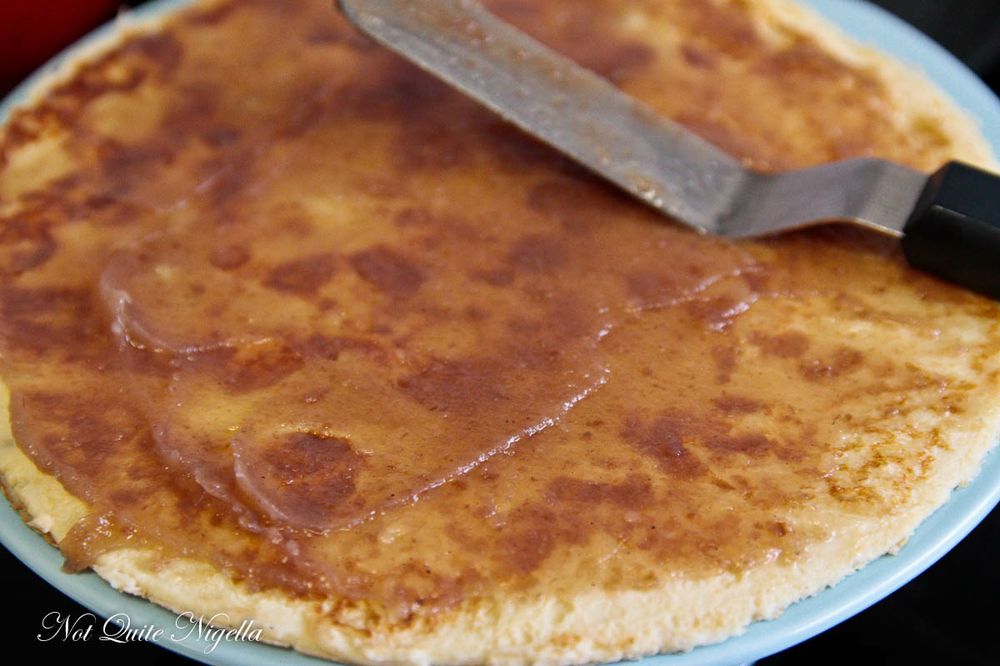 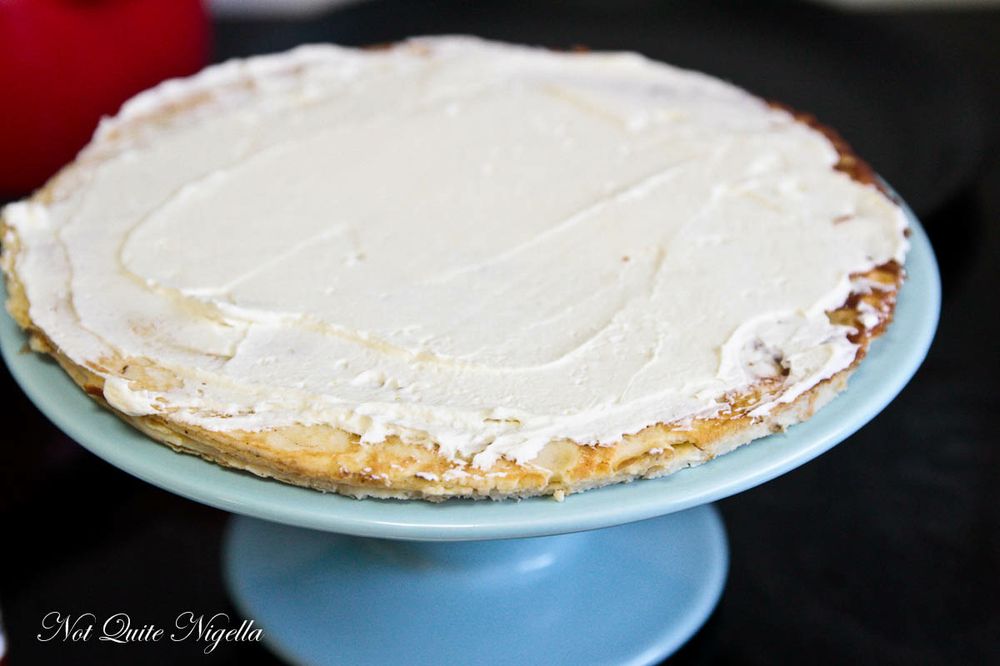 Step 4 - Whip the cream and the sugar until stiff peaks form and set aside. Loosen the chestnut puree with the rum or with a little of the cream if it is too stiff but it should be spreadable. Trim the crepes using the same collar just to make it precise (optional) and then spread one crepe with the sweetened chestnut puree and then place another on top and spread that with the whipped cream and keep alternating until you are on your last crepe. Sift icing sugar on top of this just before serving (use snow icing sugar if you can as this doesn't melt as easily as regular icing sugar). 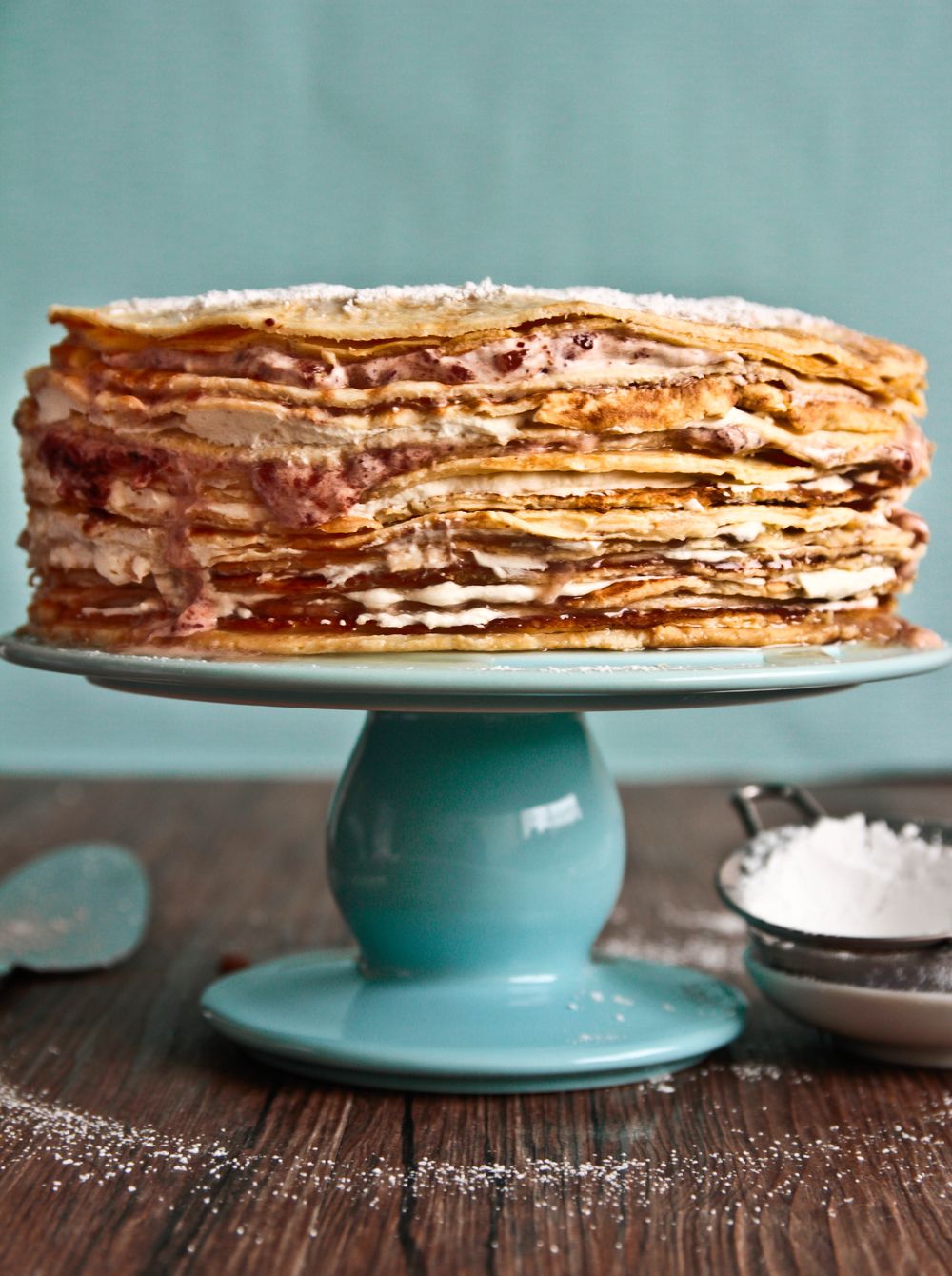