A Yearning for Yao Food in Regional China 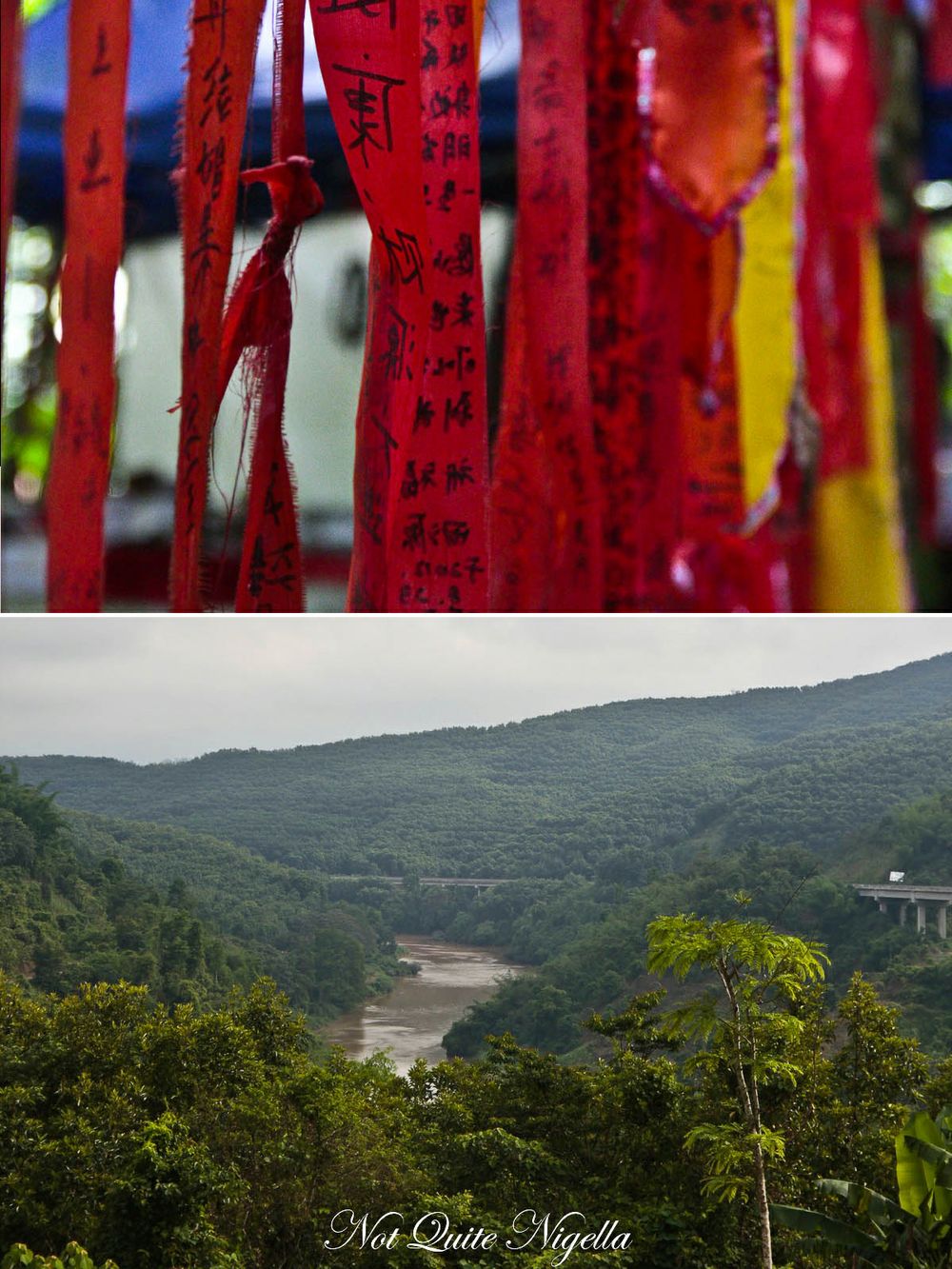 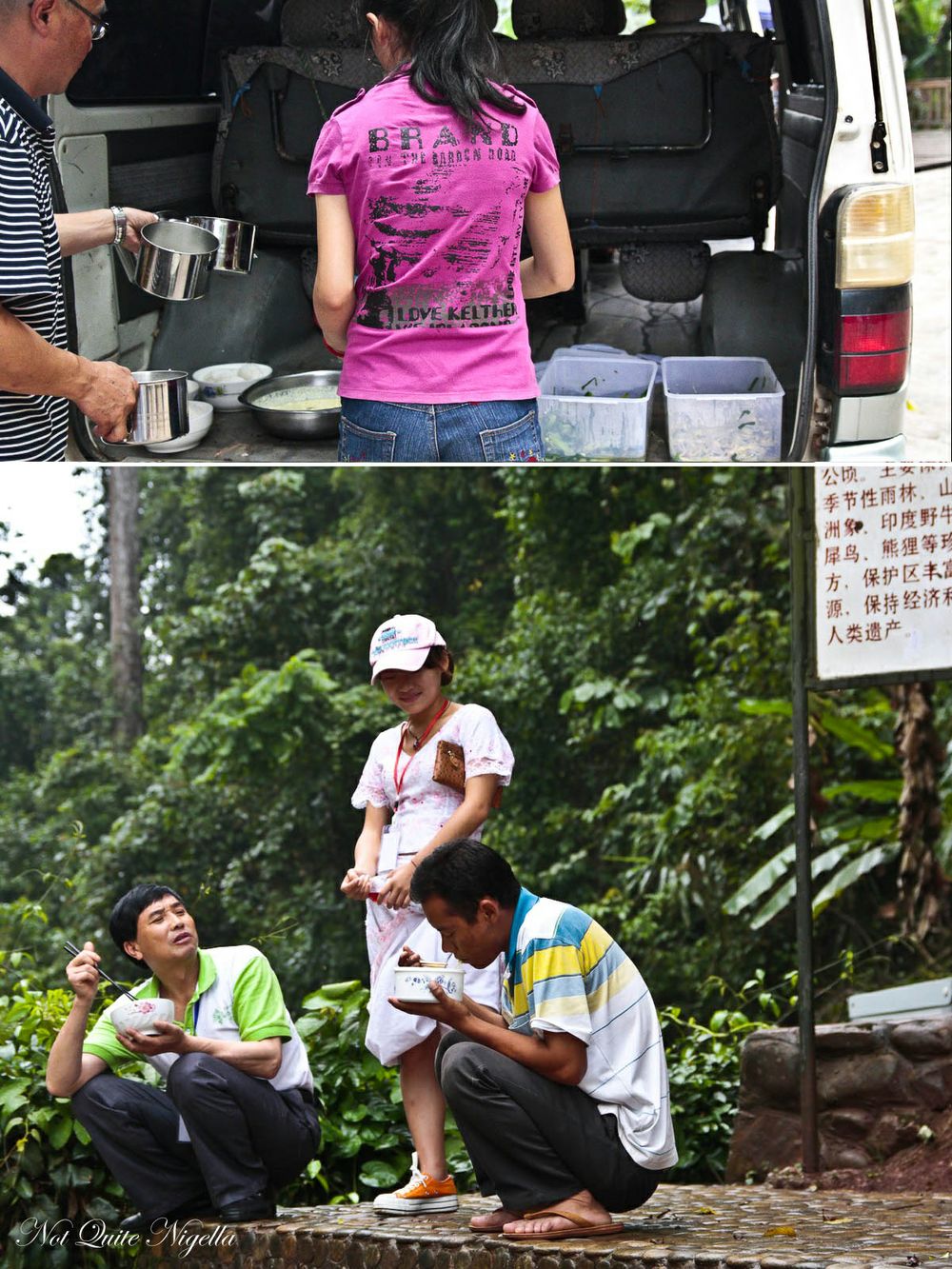 A lot of the Chinese cuisine in Western cities are based on Cantonese cuisine which is why I'm so excited to be in the Yunnan Province, an enormous province that stretches all the way up to Tibet with enormously divergent weather patterns. The north of Yunnan gets so cold that truffles are grown there while the south of Yunnan in Xishuangbanna (zish-wun-banna) is distinctly tropical. Here the Dai people, a minority ethnic tribe of people similar to Thais or Laotians coexist with Yao and Yi tribes people. 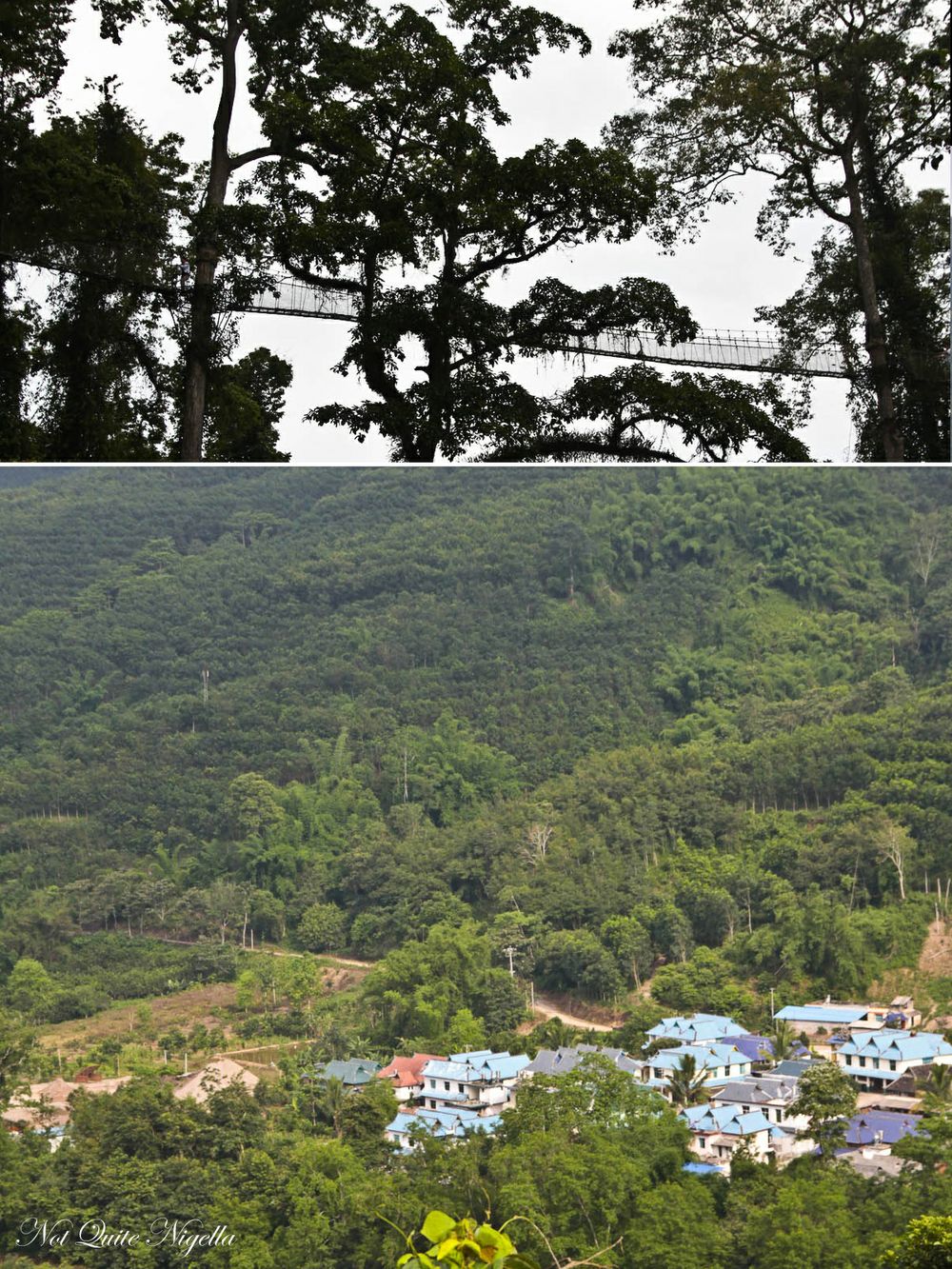 The day starts at 9am with a tour arranged for us by the Anantara Hotel as we take the two hour drive to the Sky Tree Park, an area that has become a popular tourist attraction. So much so that your reverie may be broken with flocks of tourists and leaders wielding megaphones. Some cross the swaying, rickety bridge which is not for the faint hearted. I suffer vertigo so I wait downstairs on the canopy floor and watch as a Yunnanese version of a food truck unpacks and sells soup noodle to the workers and staff here. The food looks and smells so good and I rue the early morning workout and light breakfast. 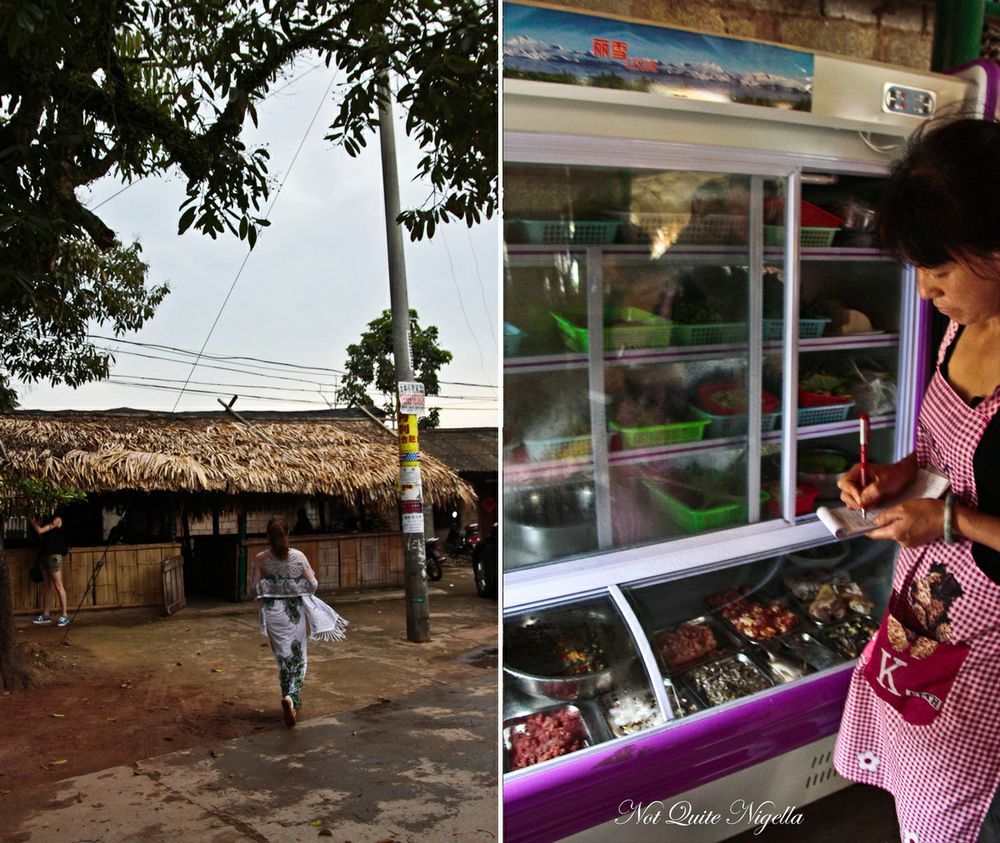 Not far away from here is a local restaurant where we'll have one of the best meals of the trip. We were warned that it wasn't glamorous by any standards. Indeed the Anantara Hotel had packed us filled baguettes, fruit and juice for lunch but we are utterly charmed and fascinated by the idea of visiting a local rural restaurant. The first place is full and turn us away but the second place with its very unassuming decor and friendly shirtless patrons waving "Ni hao!" is more welcoming and our hunger beckons. 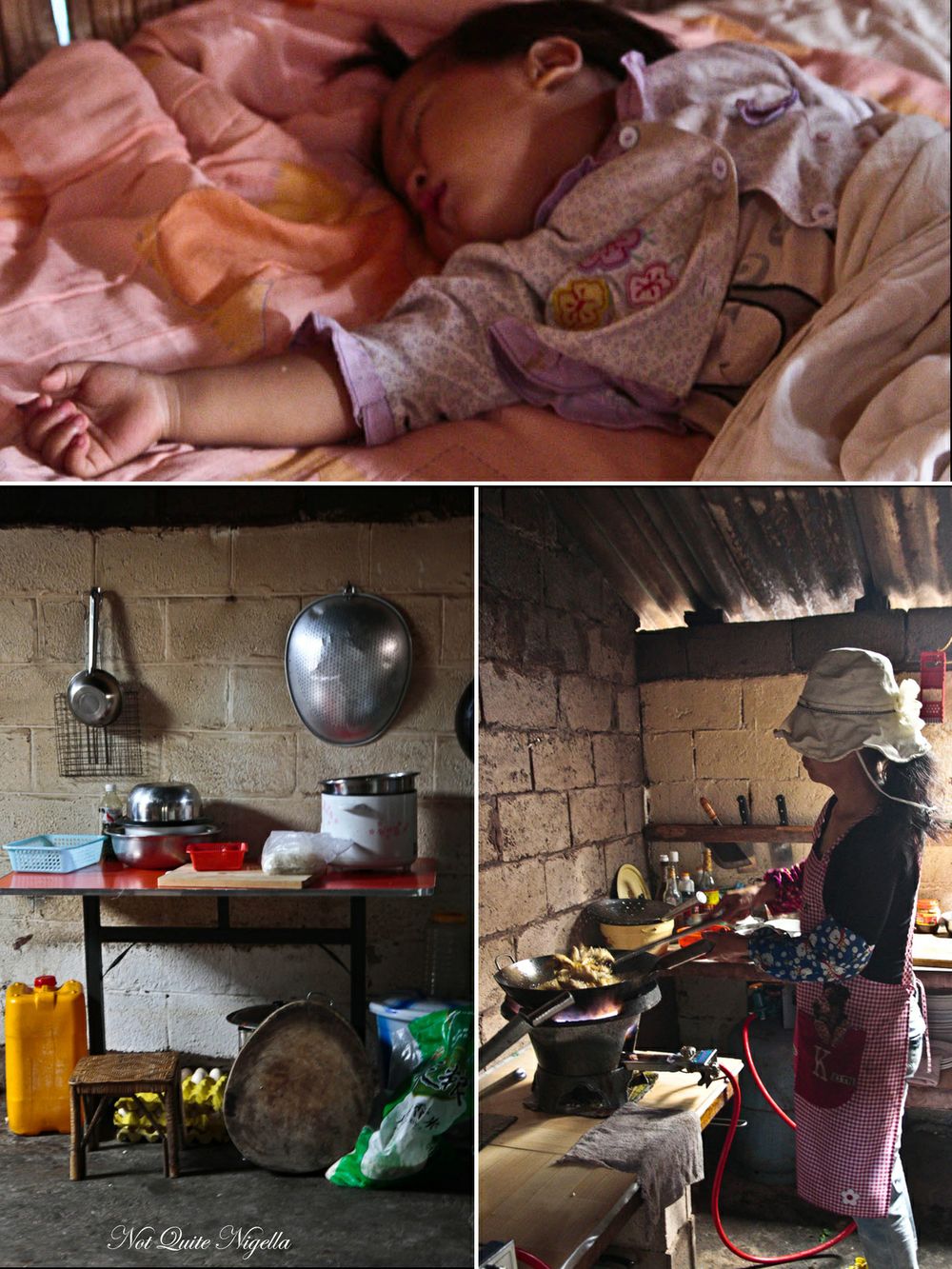 This is a Yao restaurant with food from the Yao ethnic tribe. The Dai, Yao and Yi tribes live together quite peacefully with the only conflicts coming from property disagreements or if crops are destroyed or eaten by the animals from a neighbouring tribe. Yai people plant indigo which they use to dye white cloth a  dark blue. We take a look around the restaurant and directly opposite the fridge is an adorable baby girl sleeping on the single bed. Pet dogs patter in and out and we take a look at the fridge. Our guide Anapa orders for us and we take a peek at the fridge. Everything is wonderfully fresh and while others had reservations about eating here, these misgivings were quickly dashed. 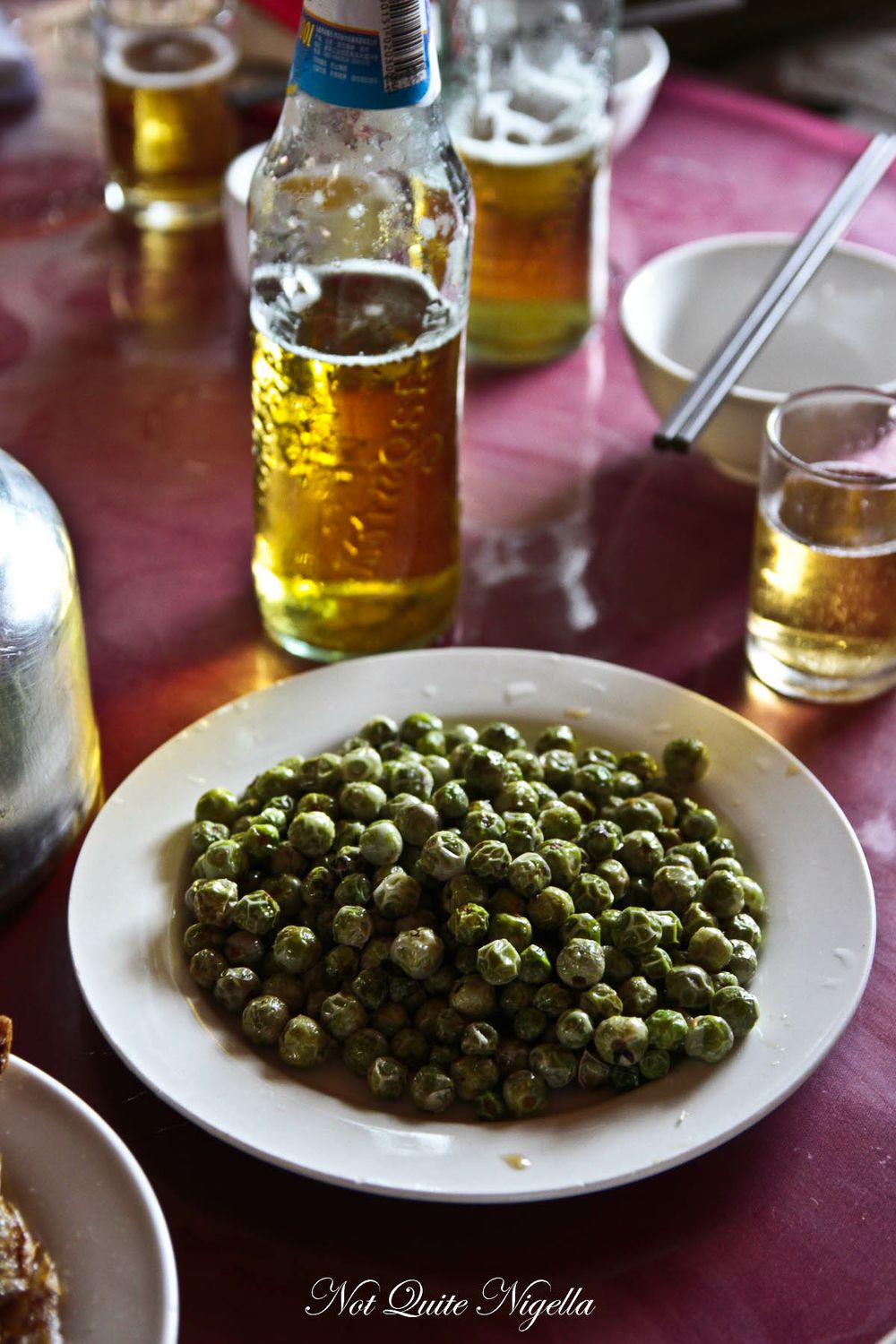 We peer into the kitchen which is rustic. Little dogs jump around hoping for scraps, getting a light tap to get them out of their way by a cook's foot. Beers are furnished-at 550mls they're sizeable and full of flavour. The smells coming from the kitchen are tempting and before long the plates of food are set down in front of us. First are tiny little pea shaped eggplant, similar to the slightly bitter Thai eggplant. 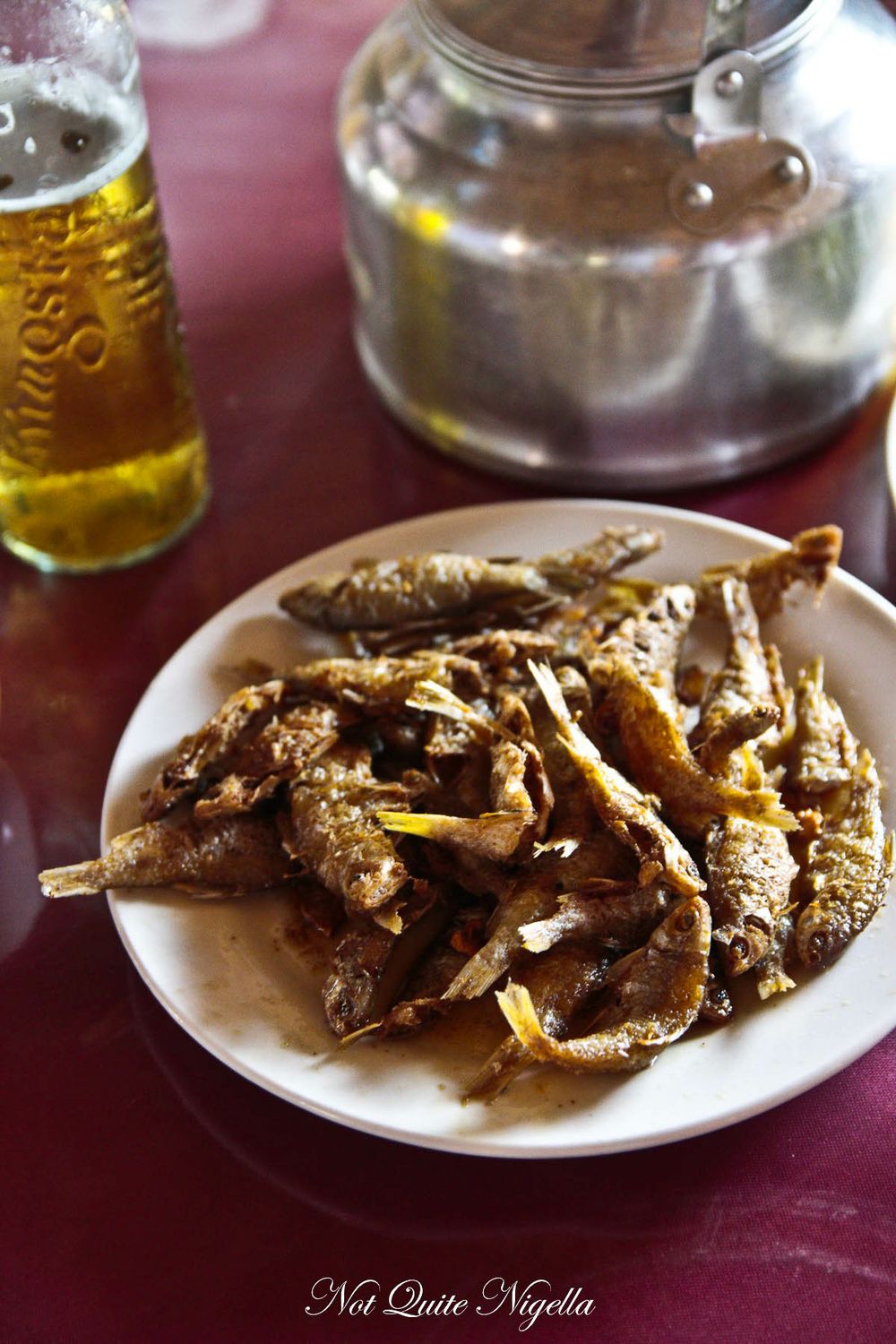 The fried fish are small river fish that are deep fried and to be eaten bones and all. They remind me exactly of a fish dish that my mother made for me when I was little with whiting. 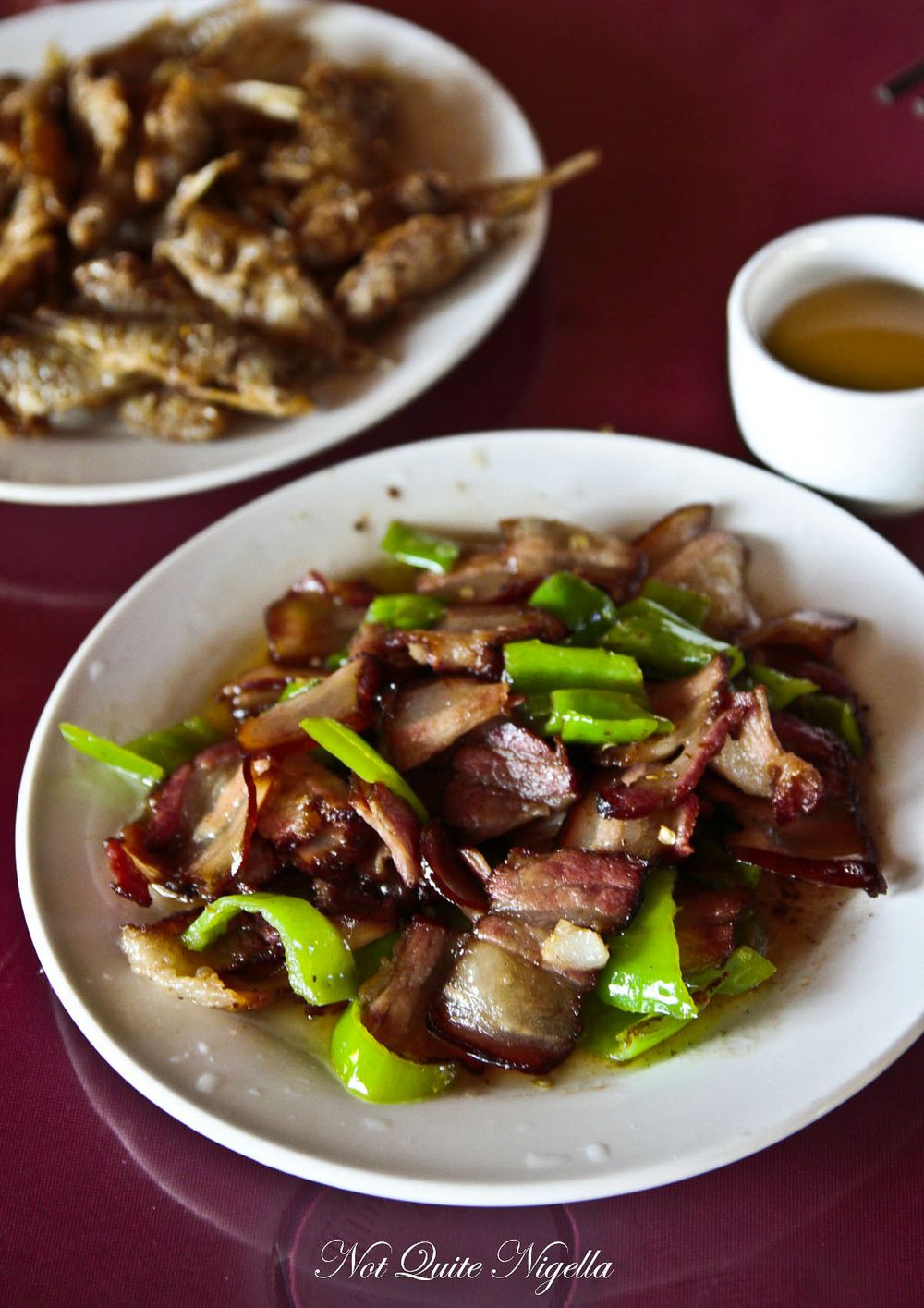 They cure their own bacon here, something I've always wanted to do and after trying theirs, it goes straight to the top of my list. The bacon and green capsicum is packed with flavour and is a favourite dish at the table. 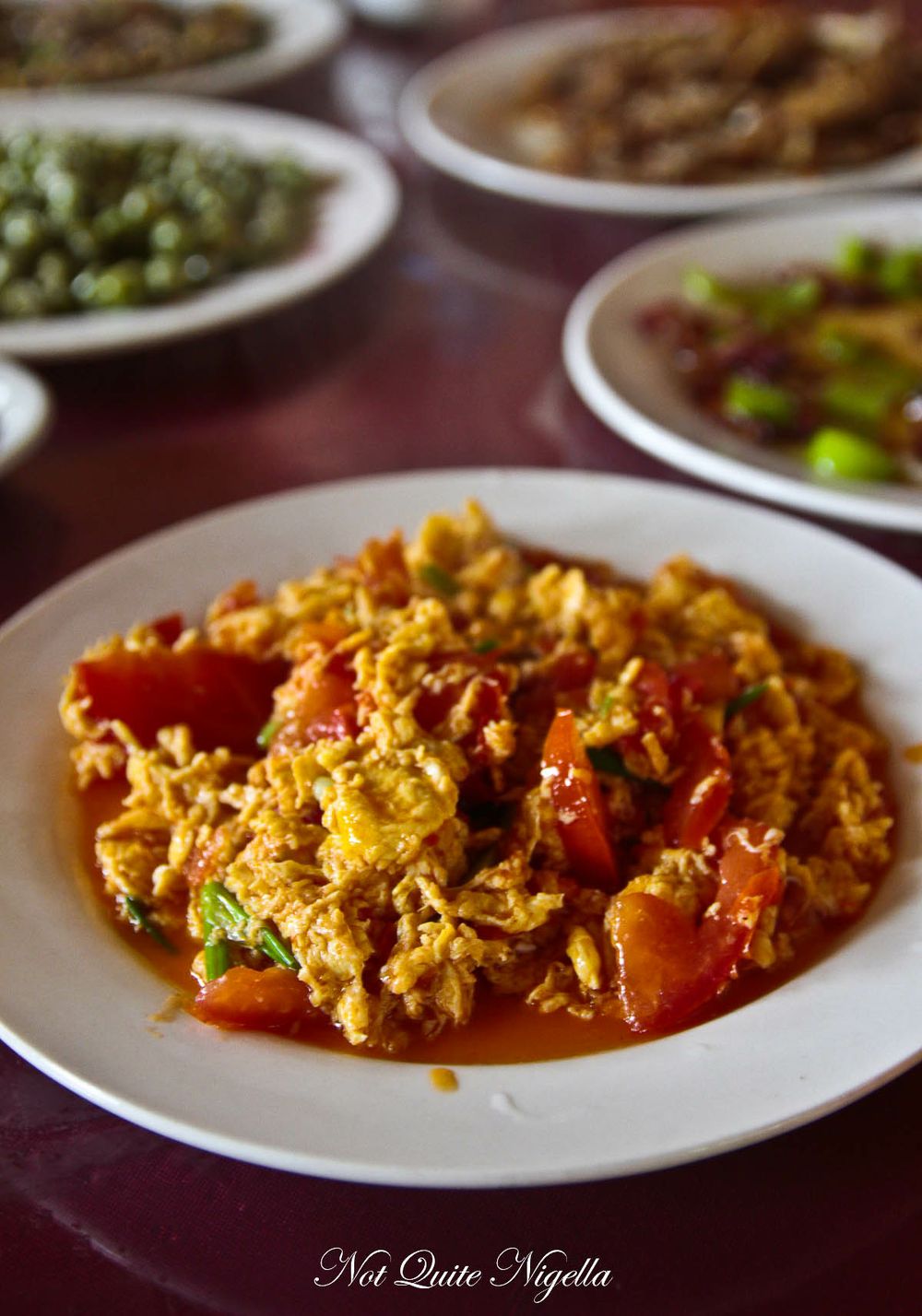 I thought that the eggs and tomato would be a basic scrambled egg dish which would be slightly bland but  this isn't at all. It's a flavour powerhouse and perfectly seasoned and there are murmurs of this being the best meal on trip under $200AUD. Indeed the whole meal ends up costing 600Y which is about $100AUD for 10 people. 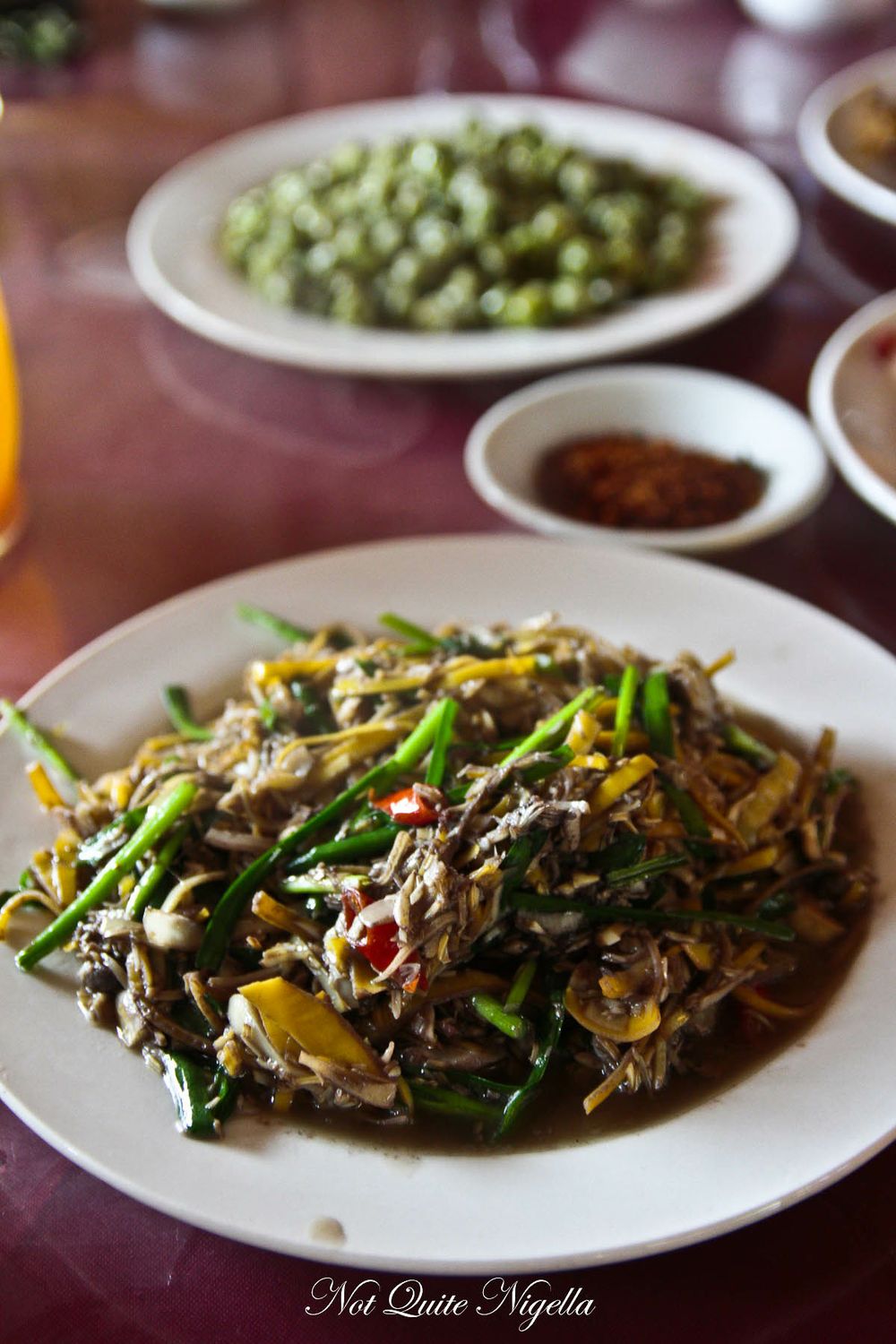 The banana flower salad is fresh, slightly crunchy and fantastic. Each dish has its own separate flavour profile and even though it is vegetable rich, you don't miss the meat. 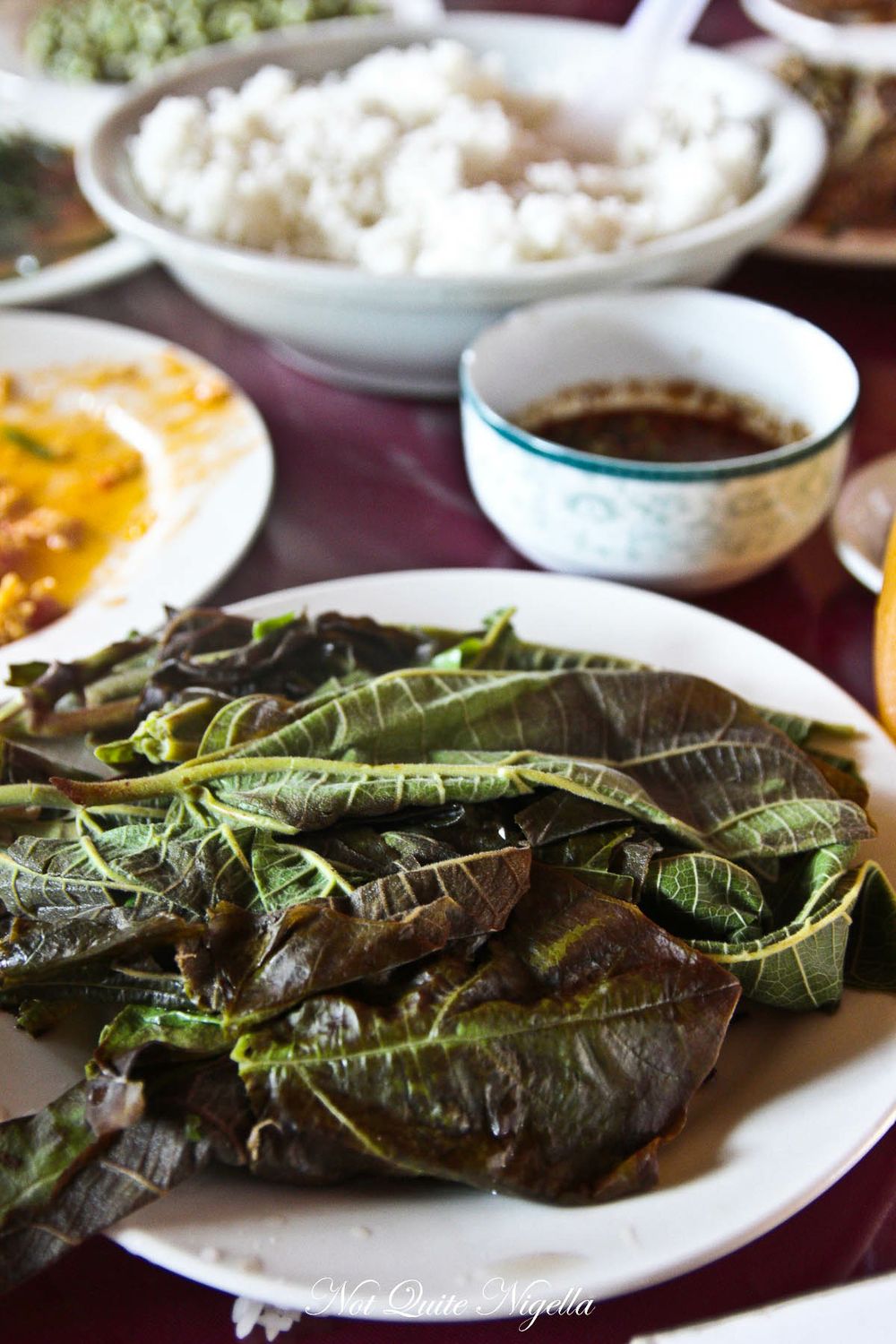 The fig leaves are served steamed and whole and they come with a spicy chilli, vinegar and garlic sauce called nanmi which packs quite a hit but is so addictive that it's hard to not fish out a second leaf. 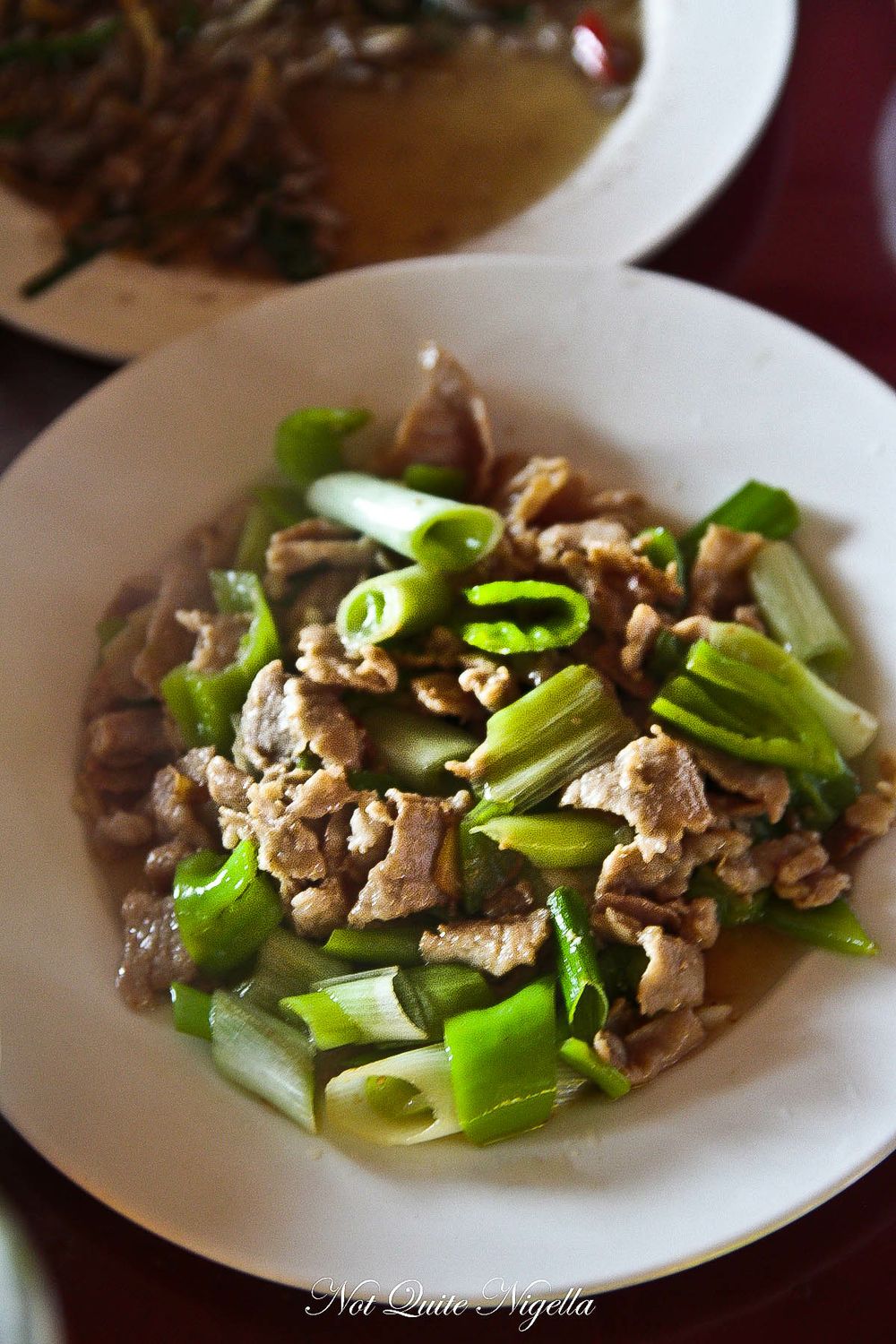 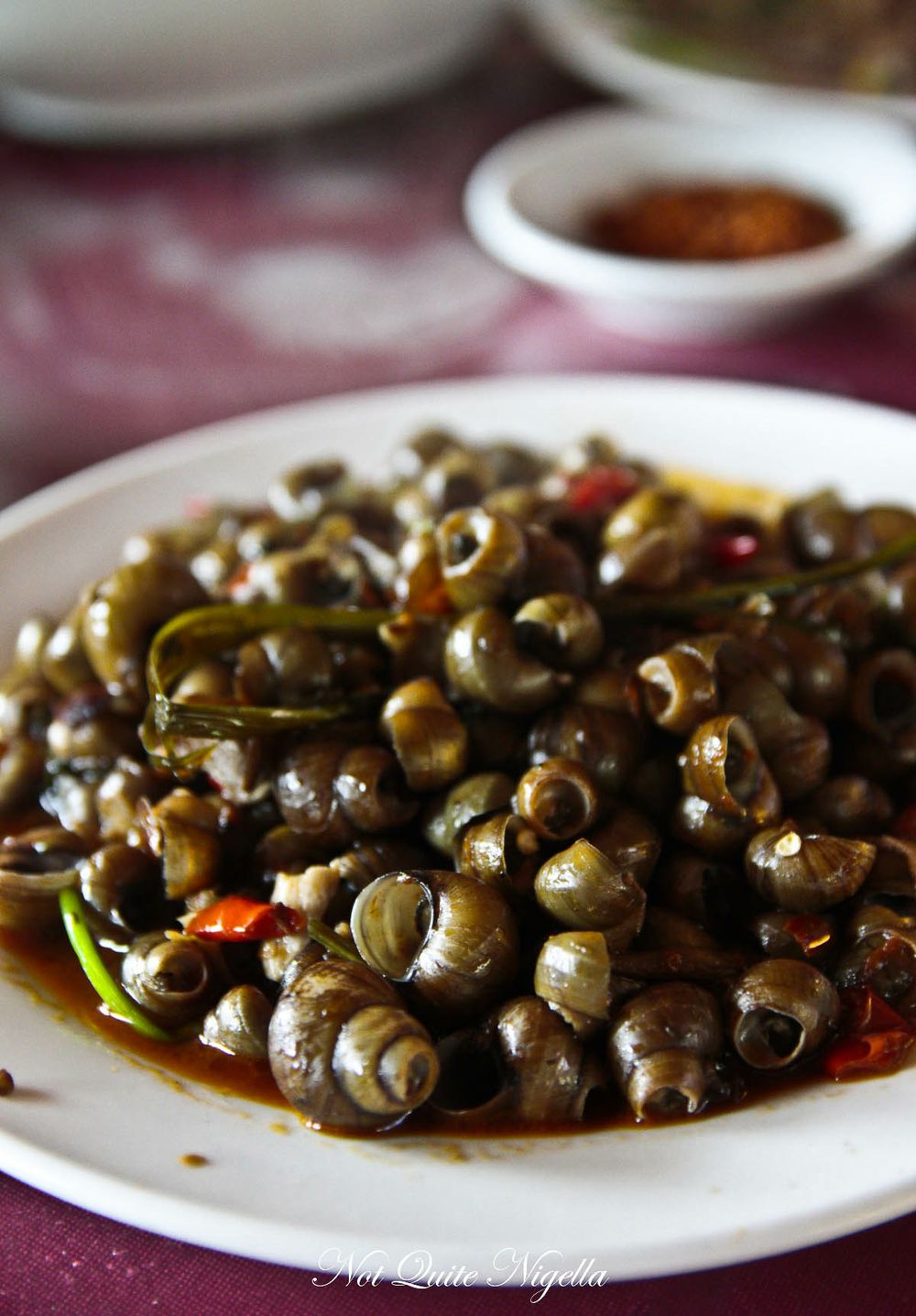 The river snails are fiddly little shells full of tiny morsels of snail meat. You pick up a toothpick and fish inside the shell for a sweet morsel of snail which has a texture not unlike squid. 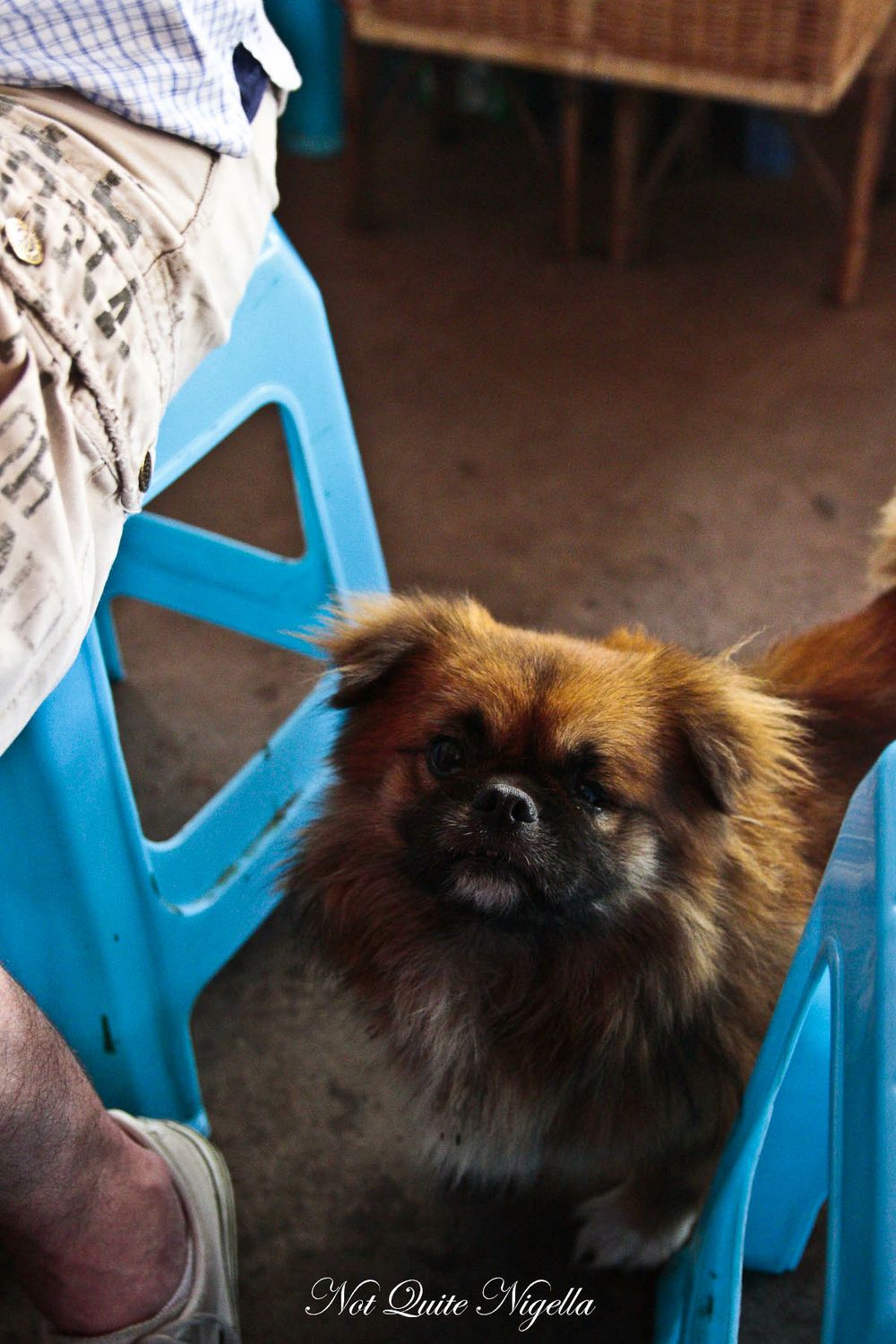 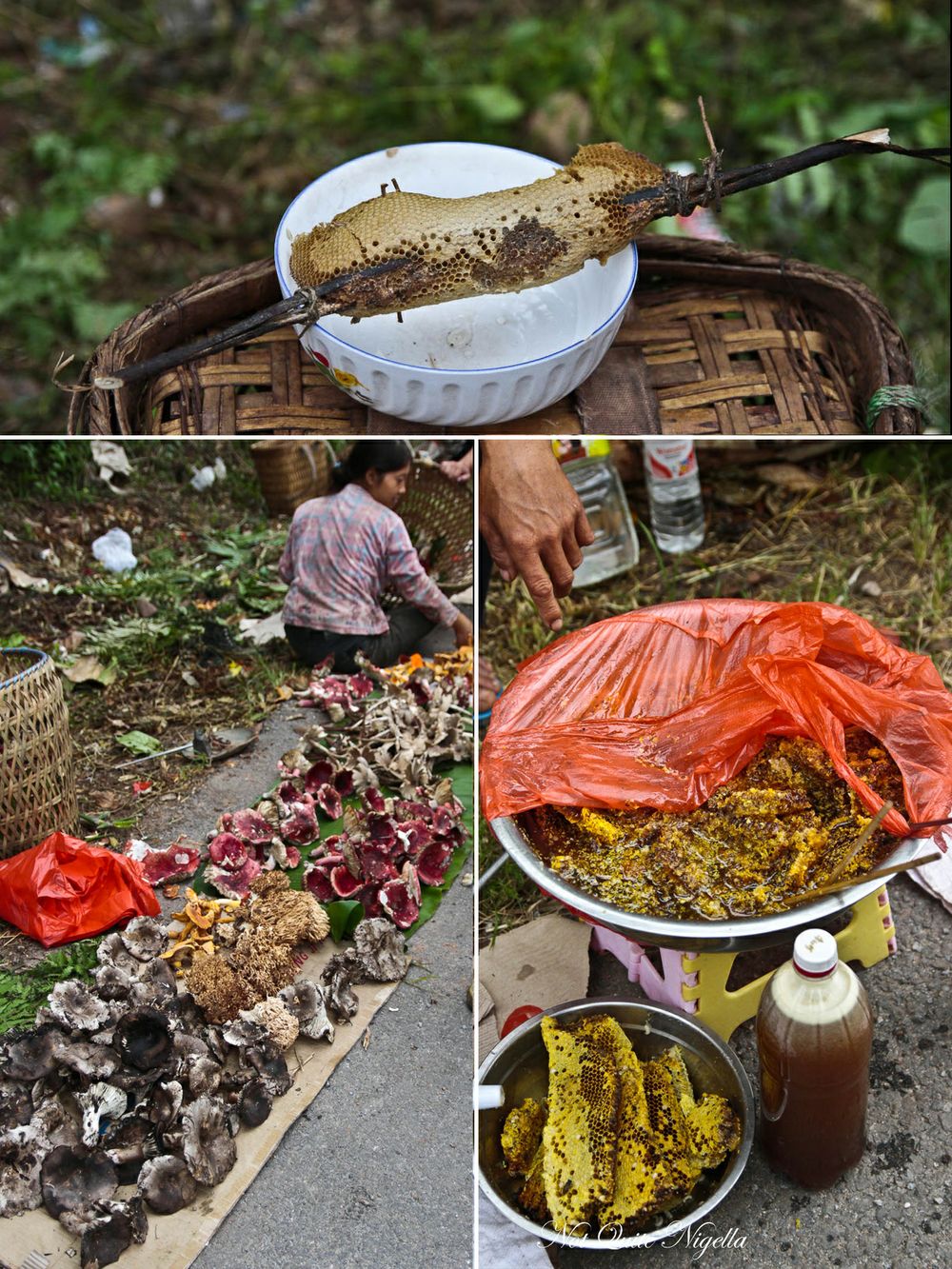 On our way back, we stop by some people selling mushrooms and honey on the side of the road. The honey is sold in plastic 1.25 litre containers and some is collected from bees that build nests on branches. Our guide tells us the price-80Yuan or $12AUD a litre. This is twice the price of what it is usually. The mushrooms must also be consumed on the day of purchase or they become poisonous. 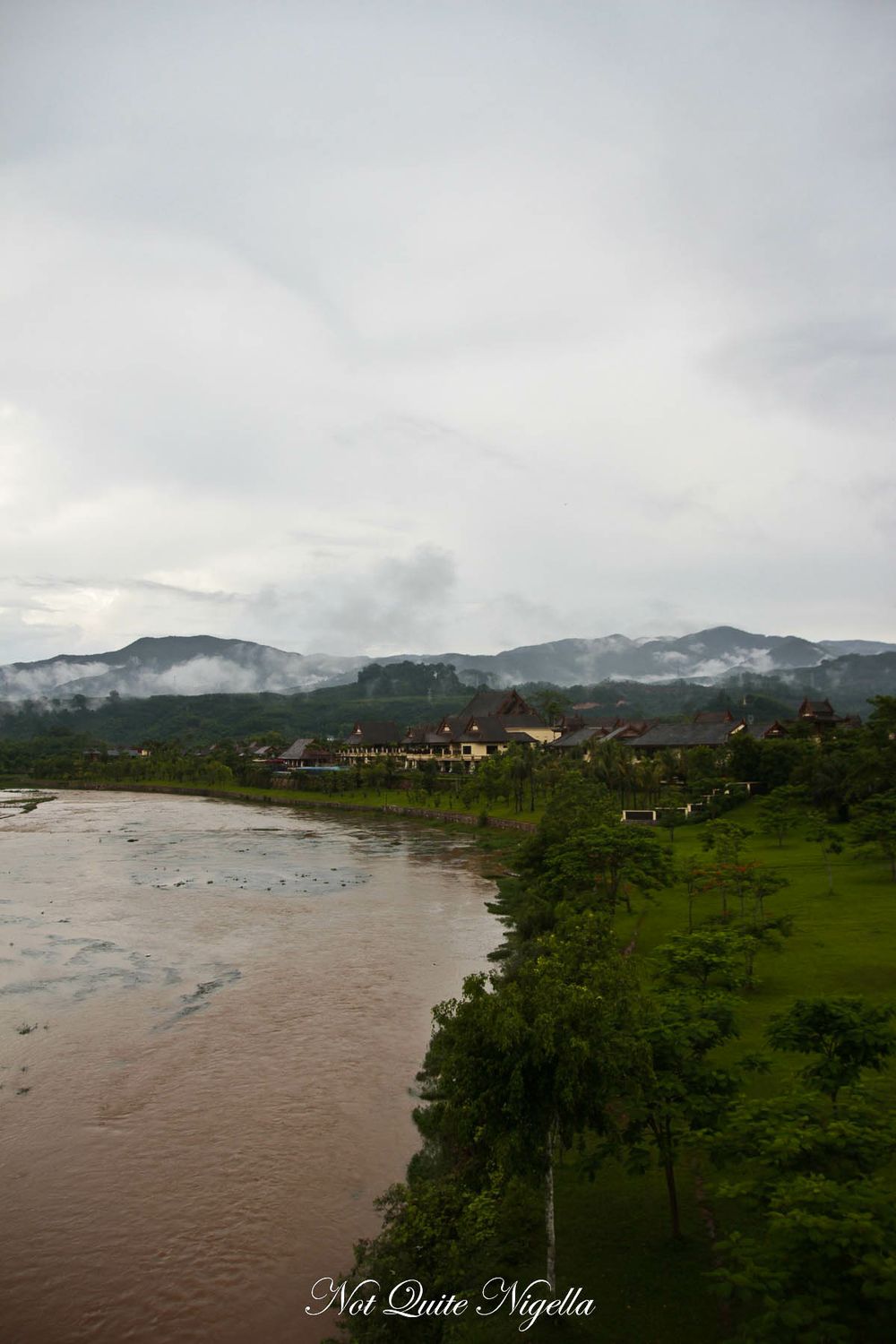 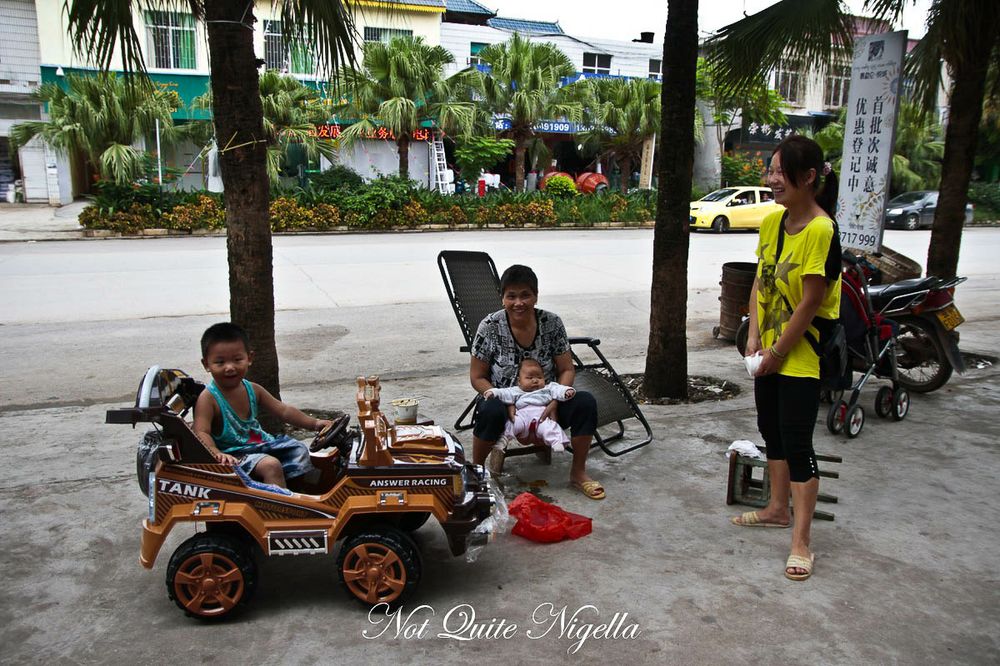 About ten minute's away from the resort is the local market. We watch as an adorable boy pretends to drive his American style tank car while his cherbic faced baby sister looks on while being bounced on a knee. Even thought the locals in Xishuangbanna don't often see "foreigners" they're incredibly friendly, stopping and posing for photographs and waving. 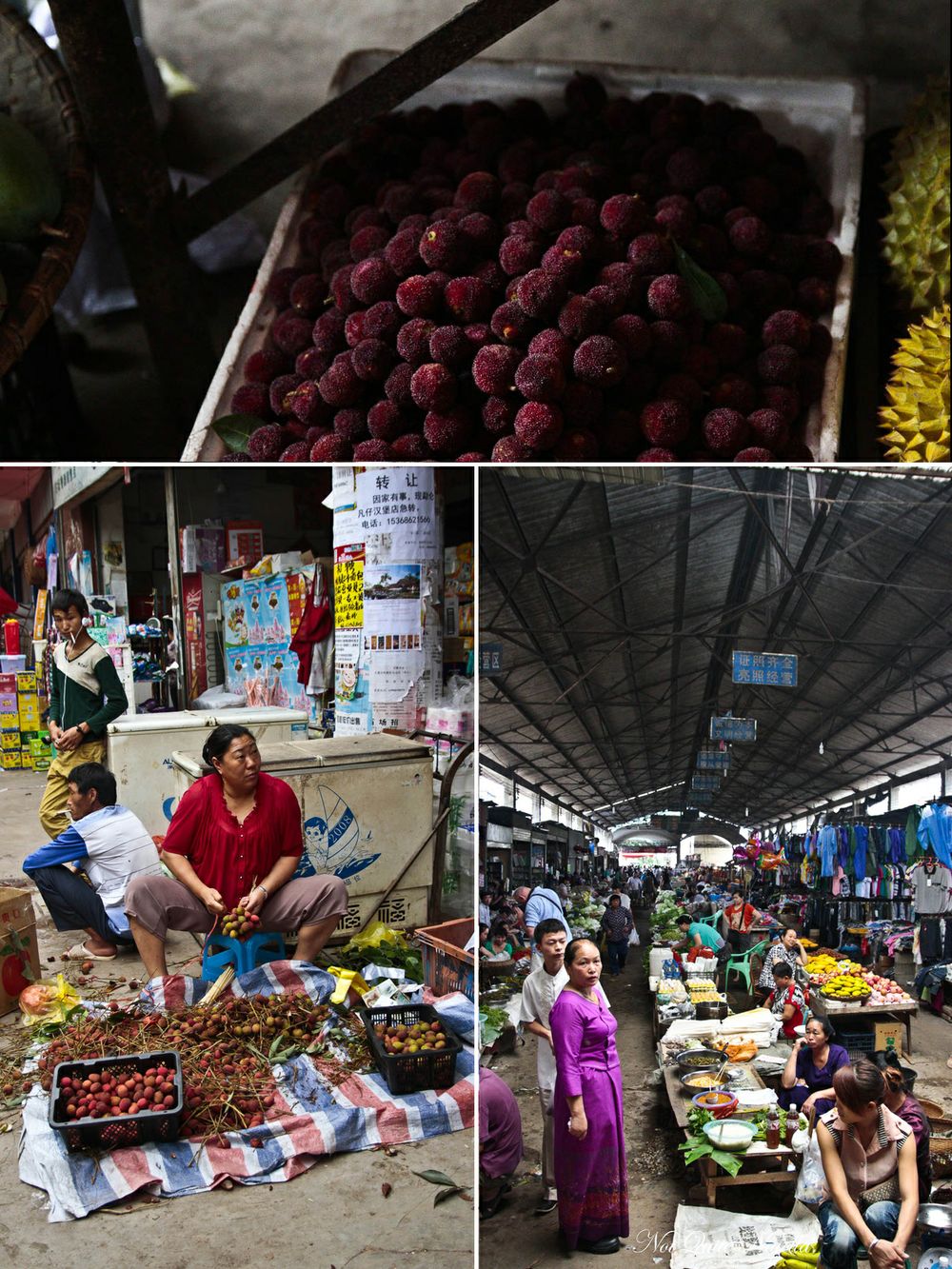 The food market that we're visiting is a market that caters for locals and the hotel doesn't buy the food from here. Nevertheless it is a fascinating experience. Alongside baskets of mangosteen, twigged lychees and rambutan are a slightly tart rose red fruit with little segments, tasting almost like a citrus fruit inside. The stall holders offer lychees and rambutans for a taste and they're sweet and delicious. 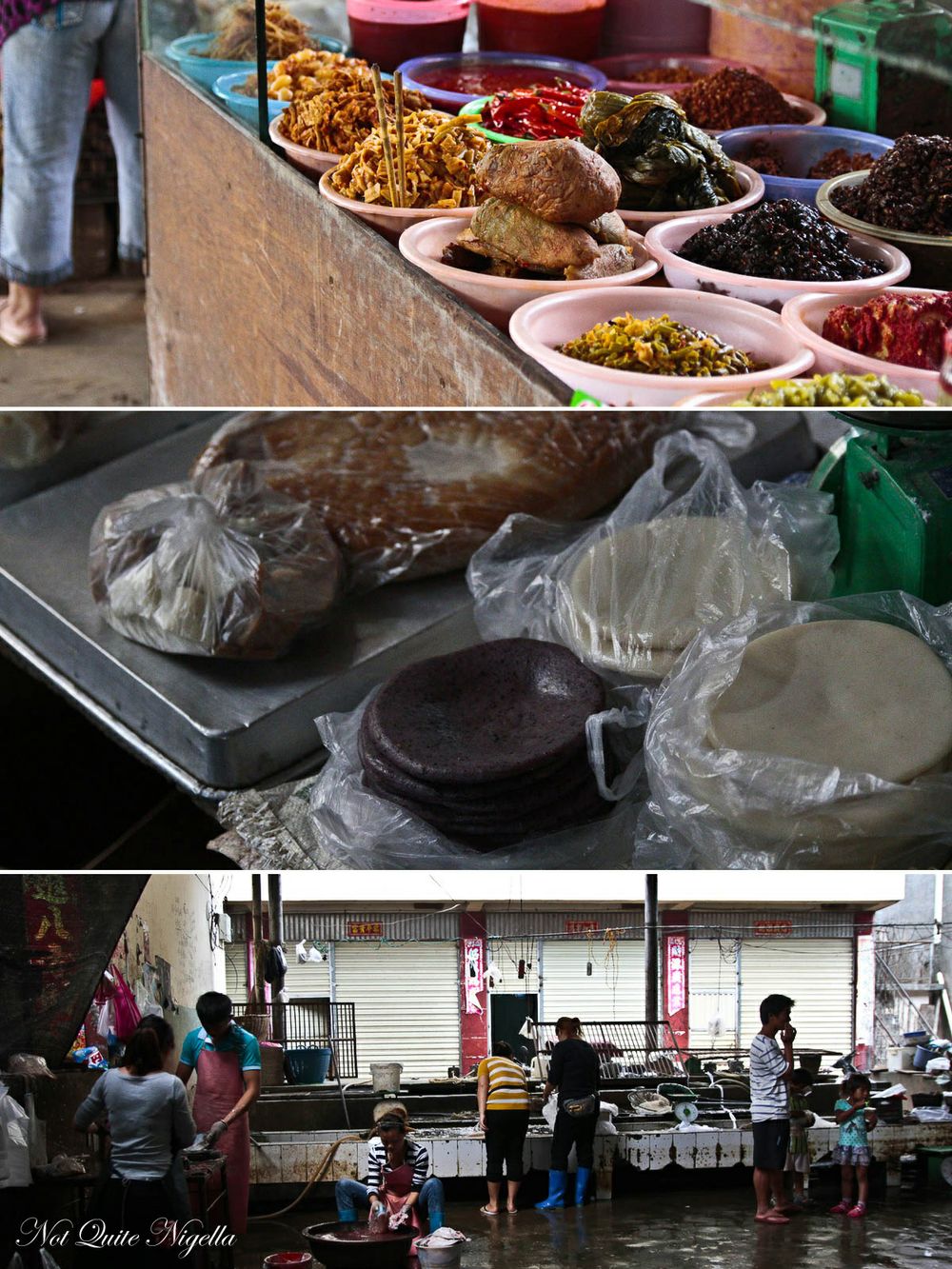 Walking further in, the main part of the market is housed in a huge covered hall. Little children run from end to end stopping and playing with stall holders. Some munch on snacks, their eyes as wide as saucers, others are asleep in their mum's carriers. We see all sorts of unusual vegetables and large slabs of tofu along with yellow and white bean jellies sold in a solid form to be sliced up into noodles. Soft rice flour cakes are sold in rounds. 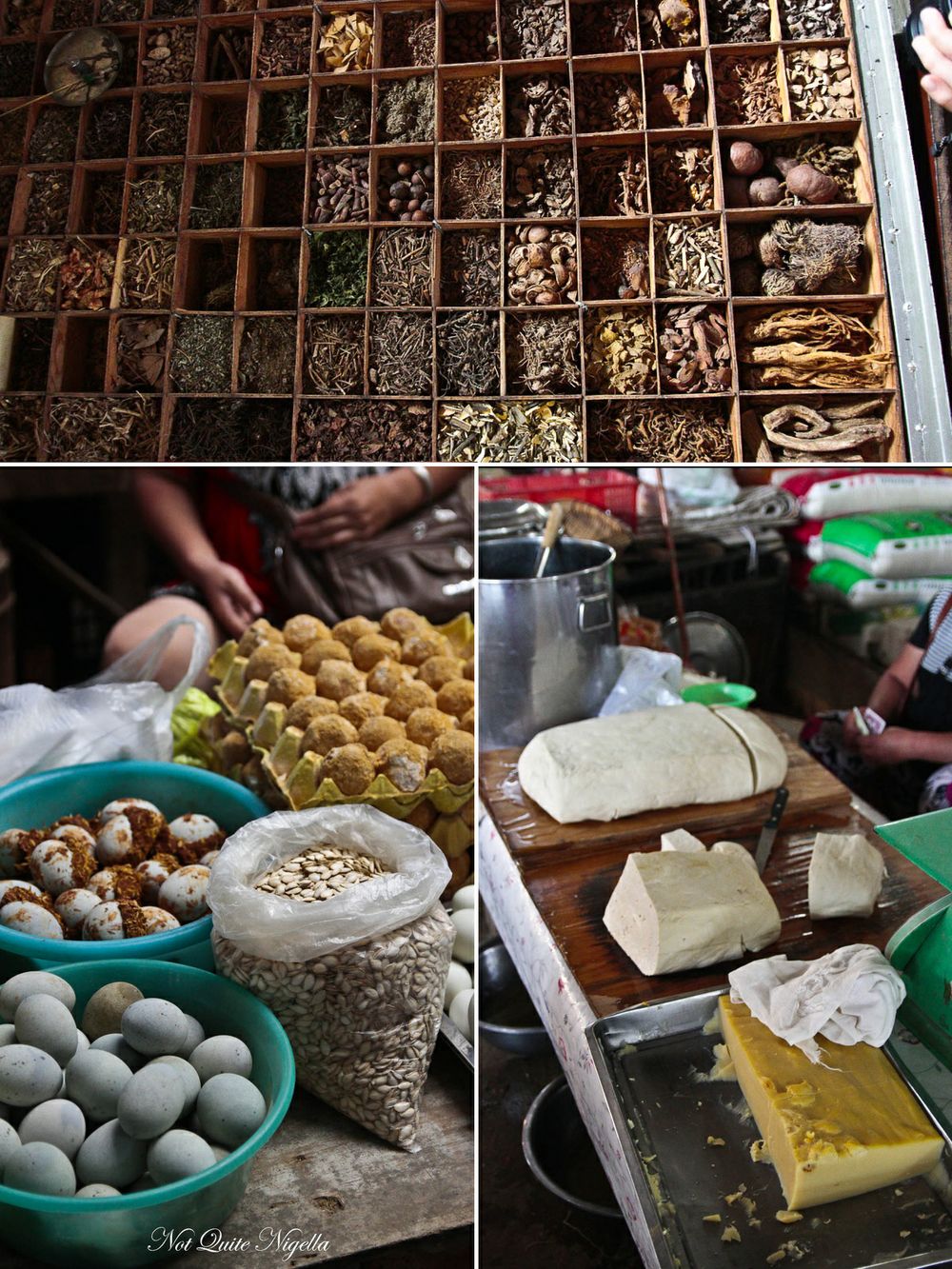 There is one stand with almost 300 herbs displayed in large wooden boxes. There are spices that I have never seen before-I pick up one that looks like a miniature log section and ask what it is for. They answer that it is to dry the body out and it is needed here because the area is so humid. Small spiky balls with tiny round holes in them are another new spice. Underneath the display of 300 is a cupboard full of a thousand spices. 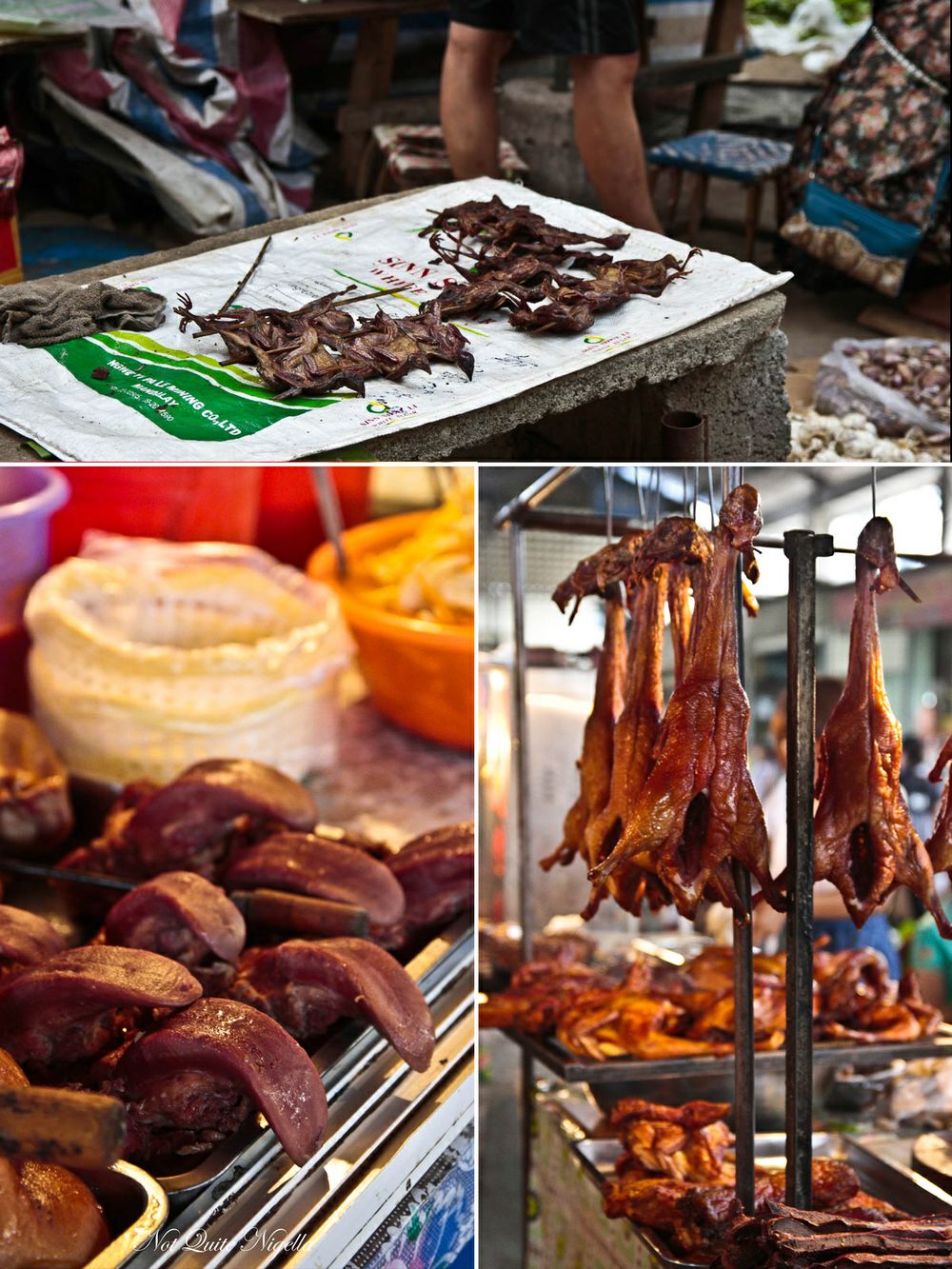 The meat section with is right in the centre of the hall. The butchers are fun loving and poke fun at each other. One grabs a pig's trotter and holds it above his colleague's head while another grabs pig's ears and does the same. 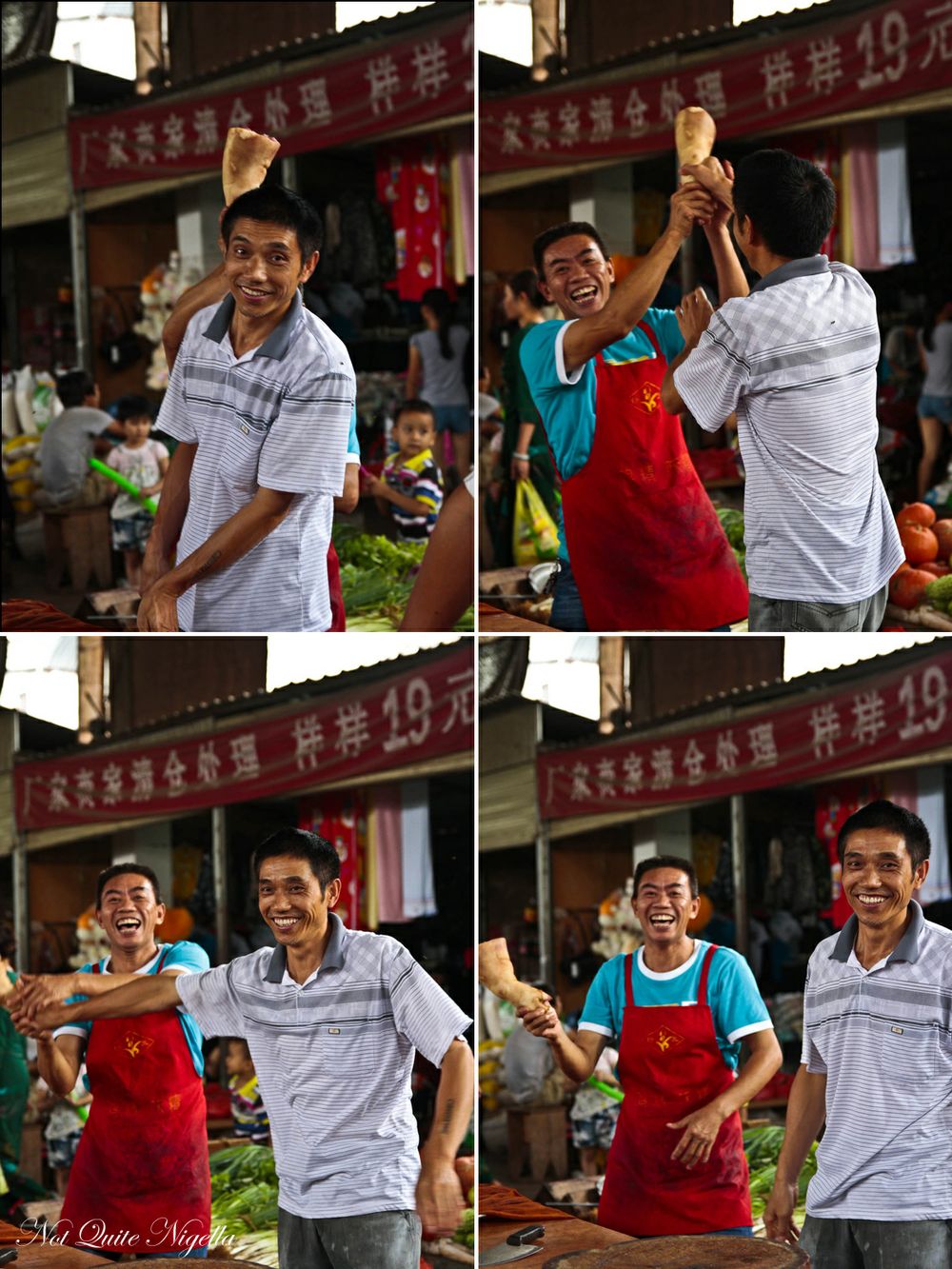 Baby ducks and geese poke their head out from boxes while chickens are crammed into a cage. In another corner the fishmongers are busy cleaning fish and gutting them. It's rustic charm is offset by the charm of the sellers who offer a ready smile and curious looks. China never fails to surprise.

So tell me Dear Reader, have you tried other types of Chinese food apart from Szechuan or Cantonese? And would you enjoy visiting markets like these? 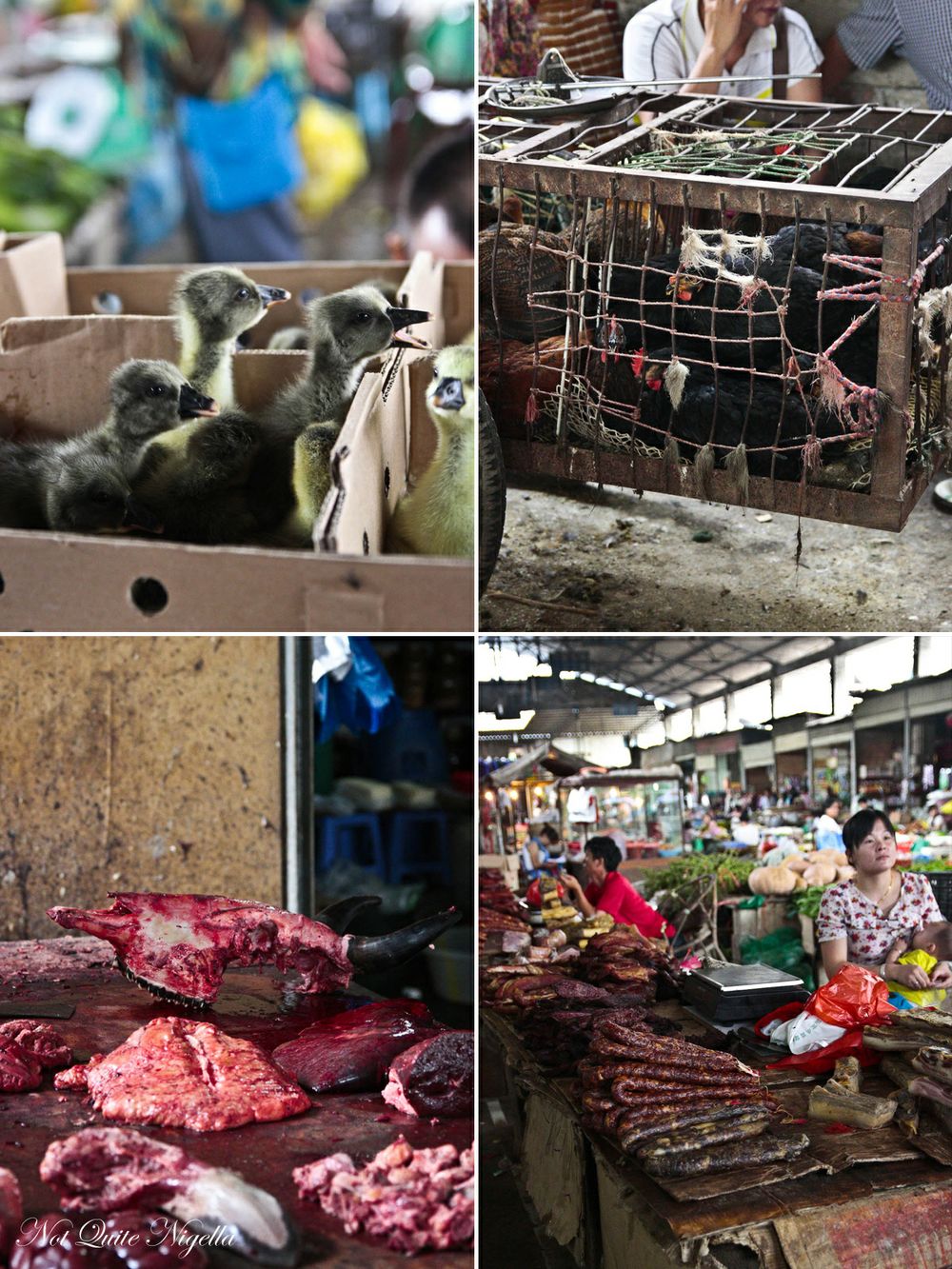 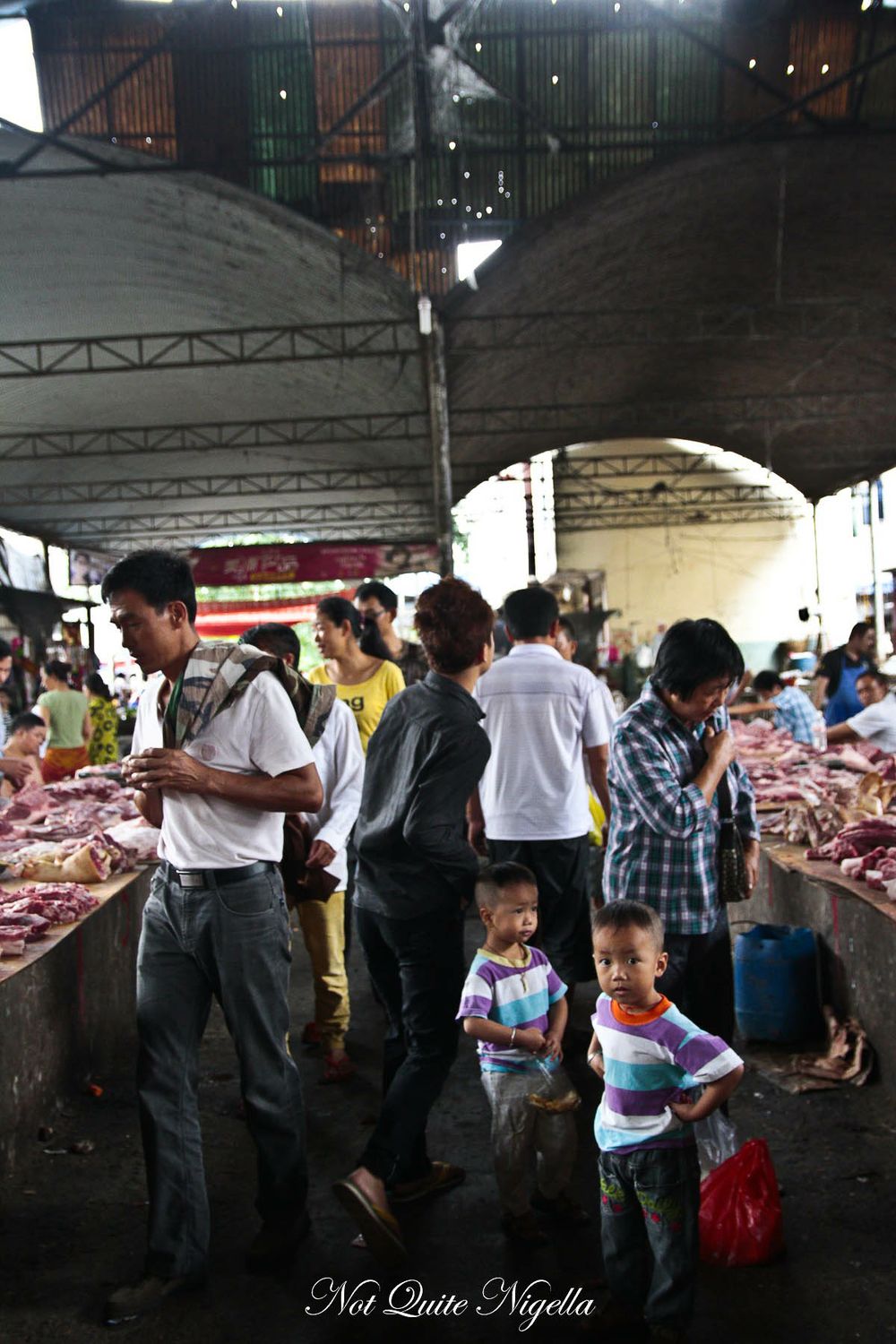