The Cuisines of Yunnan: Dai 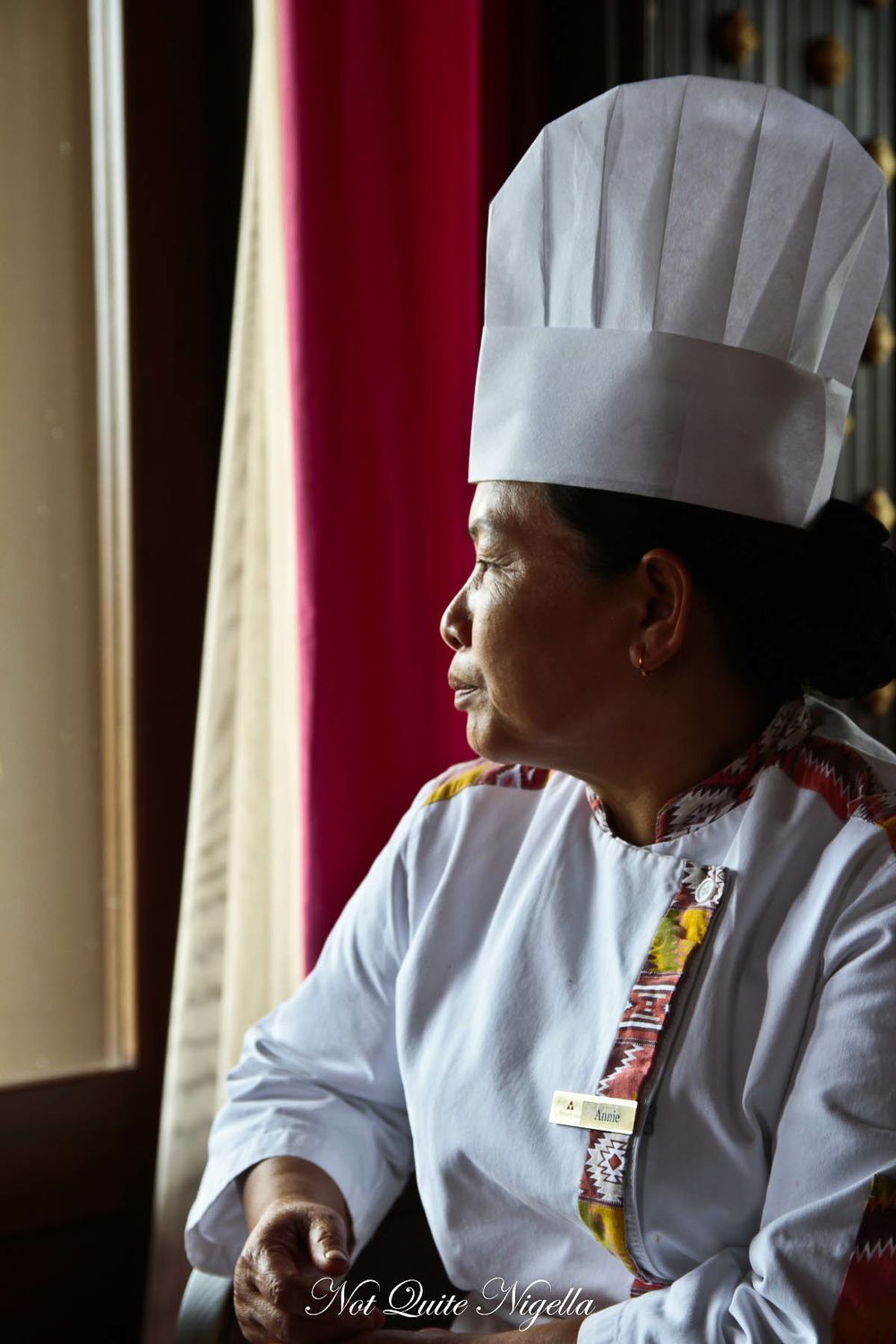 At the risk of perpetuating a stereotype, or at least repeating it, it's often said that Asian people are all the same. Most educated people know that this isn't true at all as within Asia, each country has its own distinct identity and look. And while we're in China, we're quickly learning that even within China, not all Chinese are the same. In Xishuangbanna we've been introduced to the people of the Yao and Yi ethnic tribe but the largest tribe in the area are the Dai people. And what better way than to get to know the people than through a Dai cooking class with a Dai chef.

The Dai are a 300,000 strong minority ethnic tribe living in Xishuangbanna that practice Buddhism and are related to Thai and Laotion people. However the cuisine has an identity all of its own. Dai cuisine is made up of a kaleidoscope of herbs and fresh flavours and unlike Thai, there's little coconut milk or fish sauce used. The rice that they use is sweet glutinous rice, often mixed with small pineapple pieces and served in a hollowed out pineapple called buoluofan. 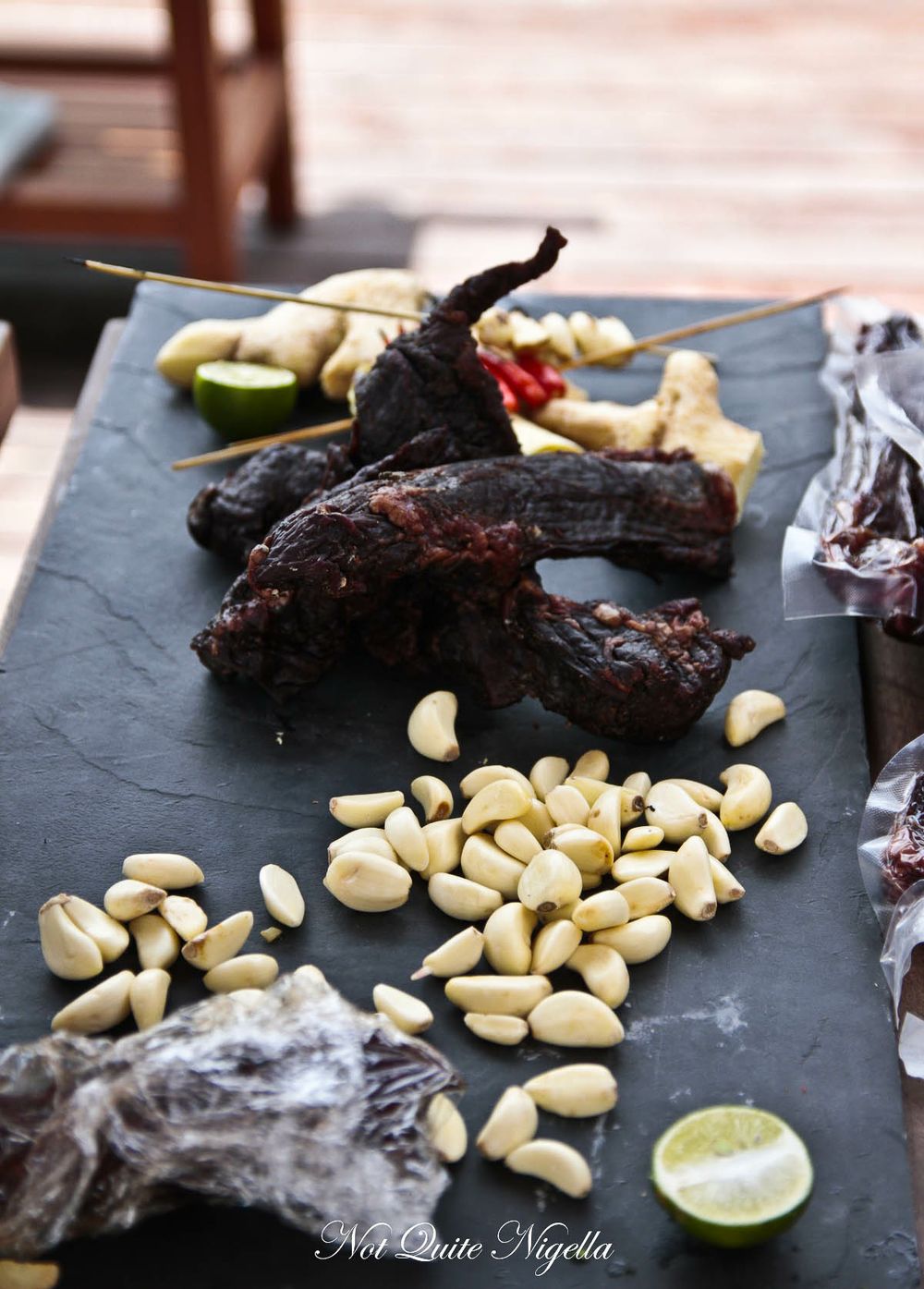 Dai food is prepared by grilling, steaming, frying and boiling but some vegetables are eaten raw, particularly medicinal plants which are used to curb the effects of living in a high humidity area. Mi Wei An is  Dai woman who used to be the chef for staff meals at the Anantara Resort as Dai cuisine is very popular in the area. Today she is teaching us the secrets of Dai cuisine and showing us how to make a Dai banquet. 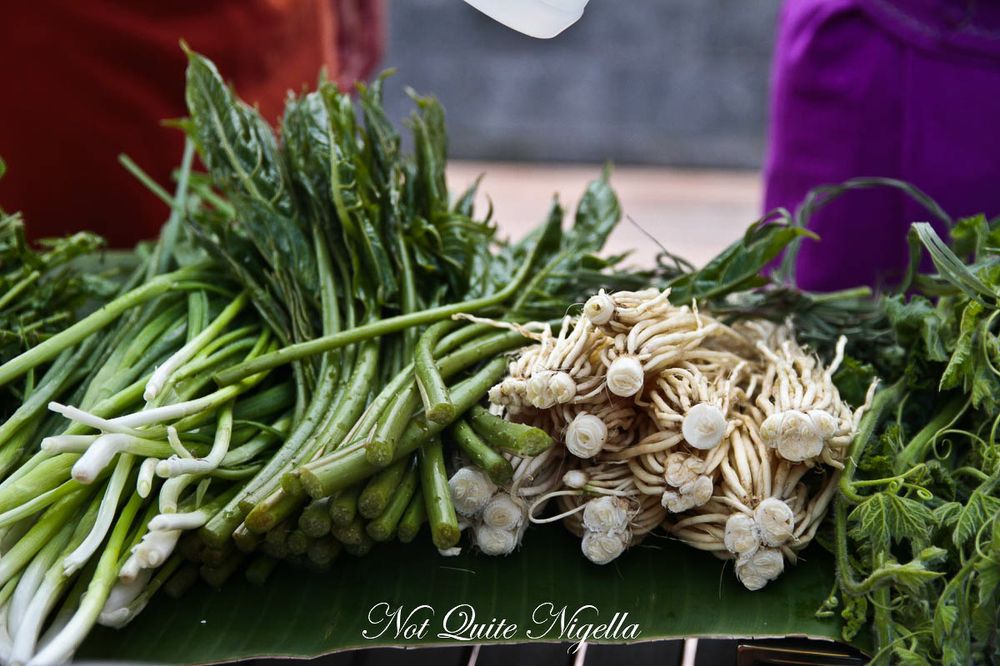 At first glance it is easy to classify it as a version of Thai or Laotian cuisine, after all they share a border and some of the dishes appear similar. However speaking to Mi Wei An gives a better understanding of this popular cuisine. There are actually three different tribes within the Dai people and this is broken down into their location and whether they are river Dai or Mountain Dai or Han people. Mi Wei An is a river or water Dai or "Shui Dai" and this cuisine is slightly different from the other sub tribes. 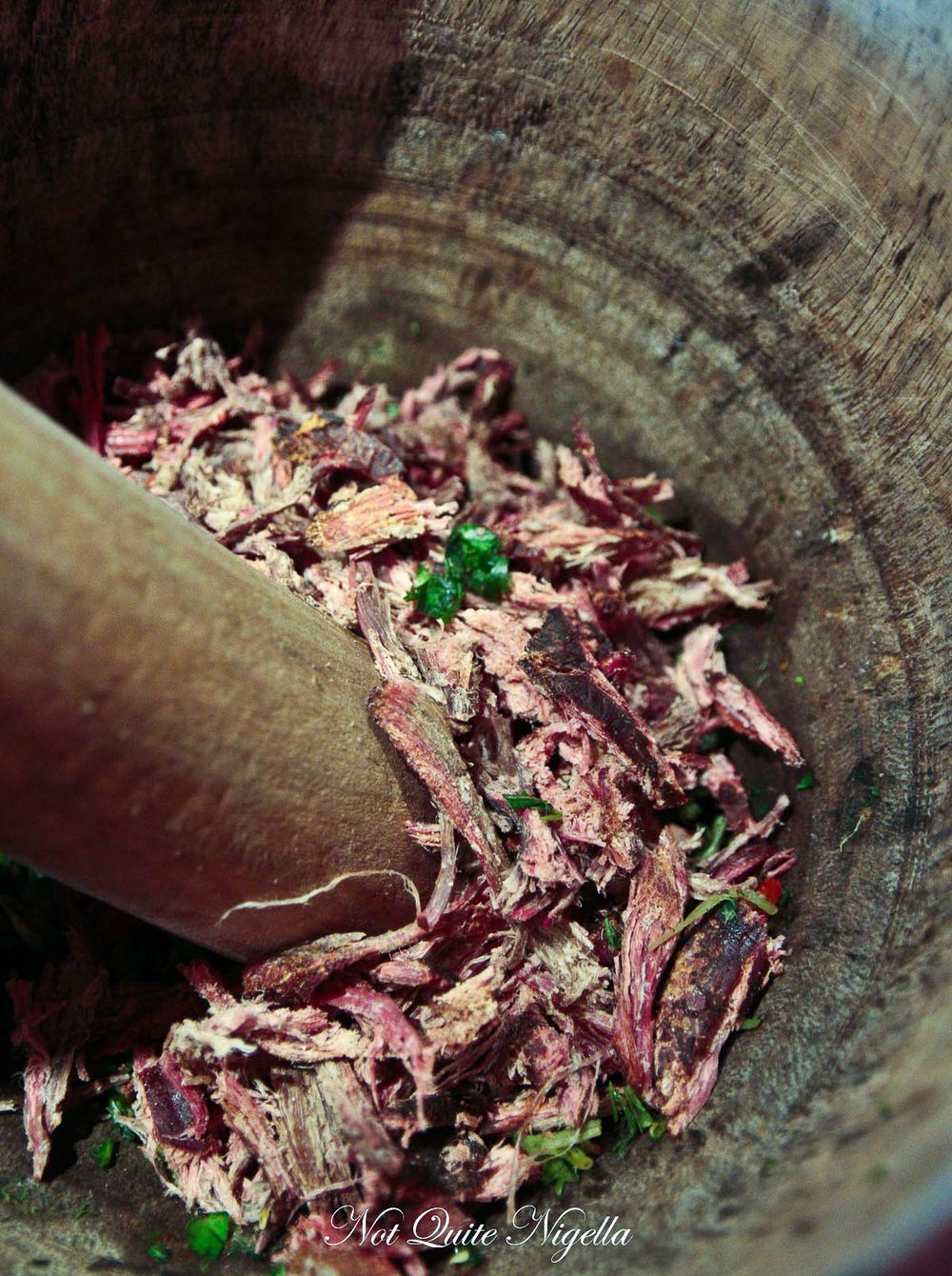 With all Dai food, herbs play an essential part in the cuisine and she tells us "without herbs there is no Dai food". Each family has their own herb garden and all members of the family learn how to cook no matter what their gender is. The predominant flavour is salt and unlike Thai cuisine which balances sweet, salty, sour and spicy, there is virtually no sweet element to Dai dishes, save for some sugar used in the rice cake sweets for dessert. The Shui Dai people also like using lime in their cooking. 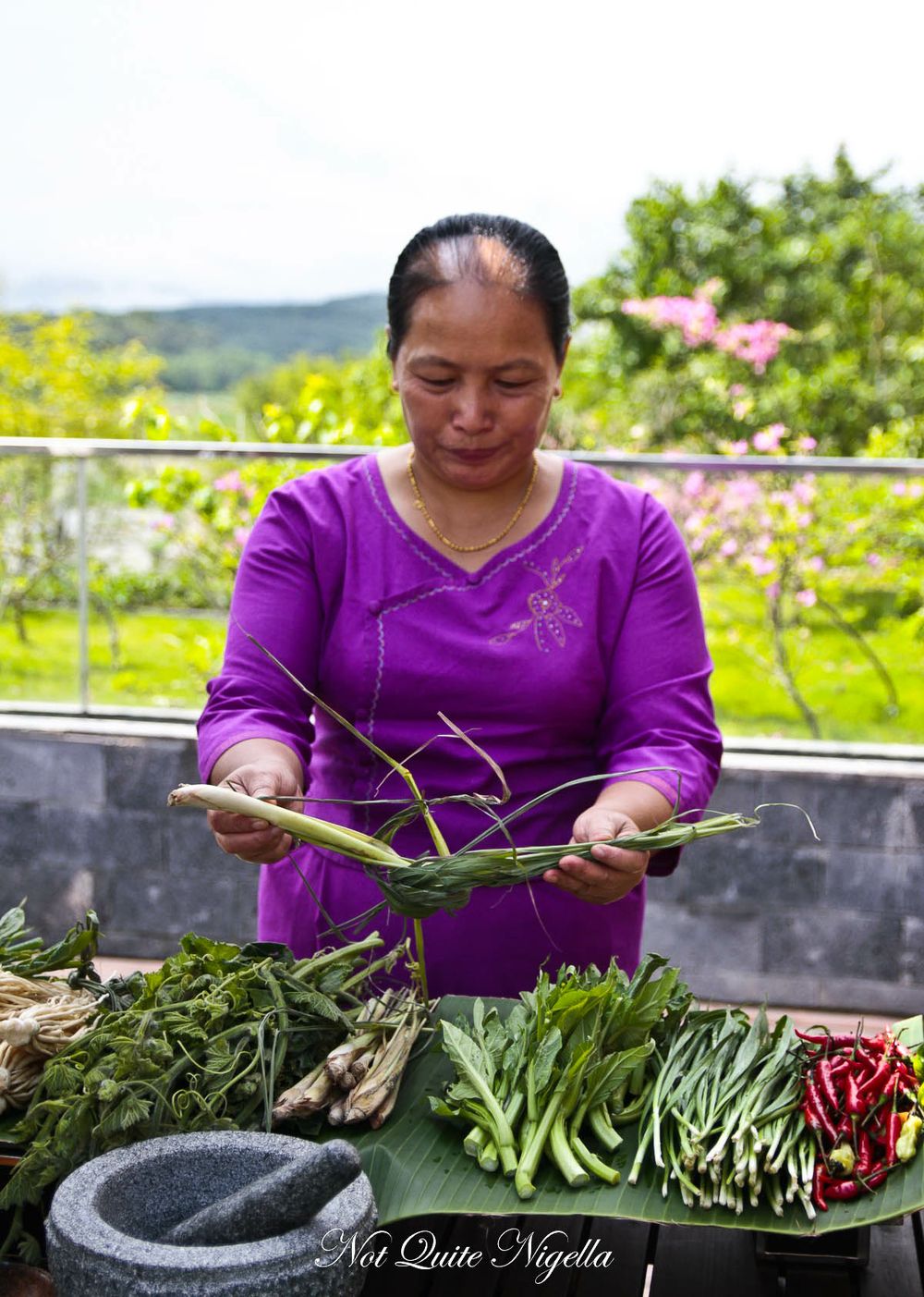 Mi Wei An in traditional costume

Typical Dai dishes use the river moss or seaweed which is collected, flattened and deep fried or barbecued. During Dai New Year on May 15th, special glutinous sticky rice cakes are deep fried and served puffy and large. The Dai people have a breakfast of rice noodles in soup with freshly grilled rice cakes. Lunch is the main meal of the day and this is similar to what is served at dinner. Dinner can consist of six courses within four of them being vegetables and two meat-each course is quick to cook so there isn't complex preparation required. There is a local rice wine called "zi kou ju" along with "baiju" whiskey. 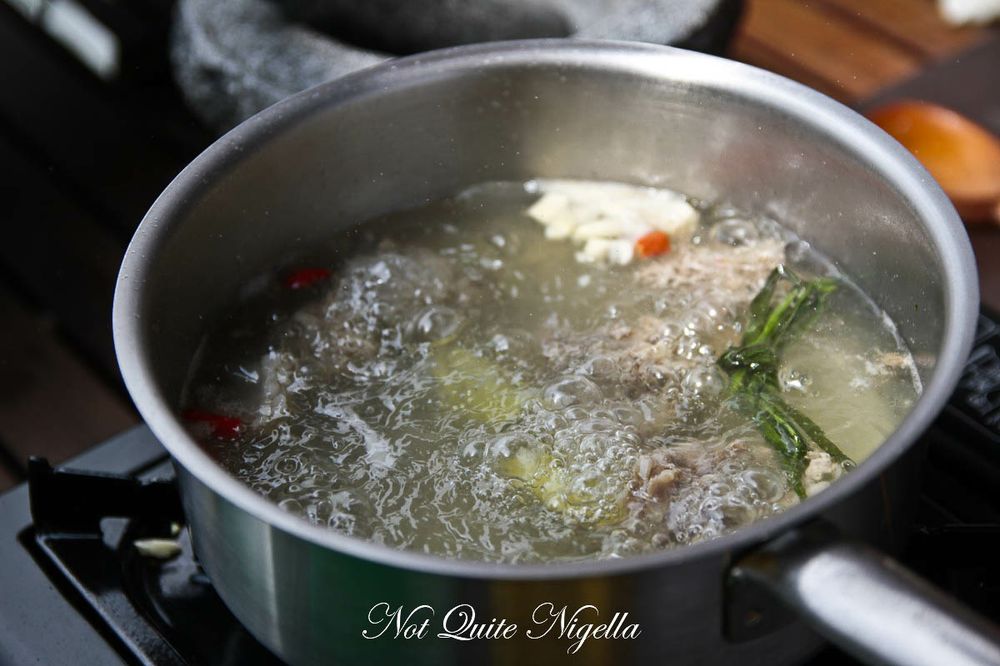 Mi Wei An has been a chef for seven to eight years working at Anantara for the past five. She is a self taught chef who learned her skills from neighbours and other people in the village. The setting for us to learn is the sunny deck of the Luosuo restaurant with the river of the same name to the side. There are stations set up for each of us so that we can cook our own dishes as it is a hands on course. A range of fresh herbs from French or sawtooth coriander, mint, coriander, local basil and chillies are laid out. 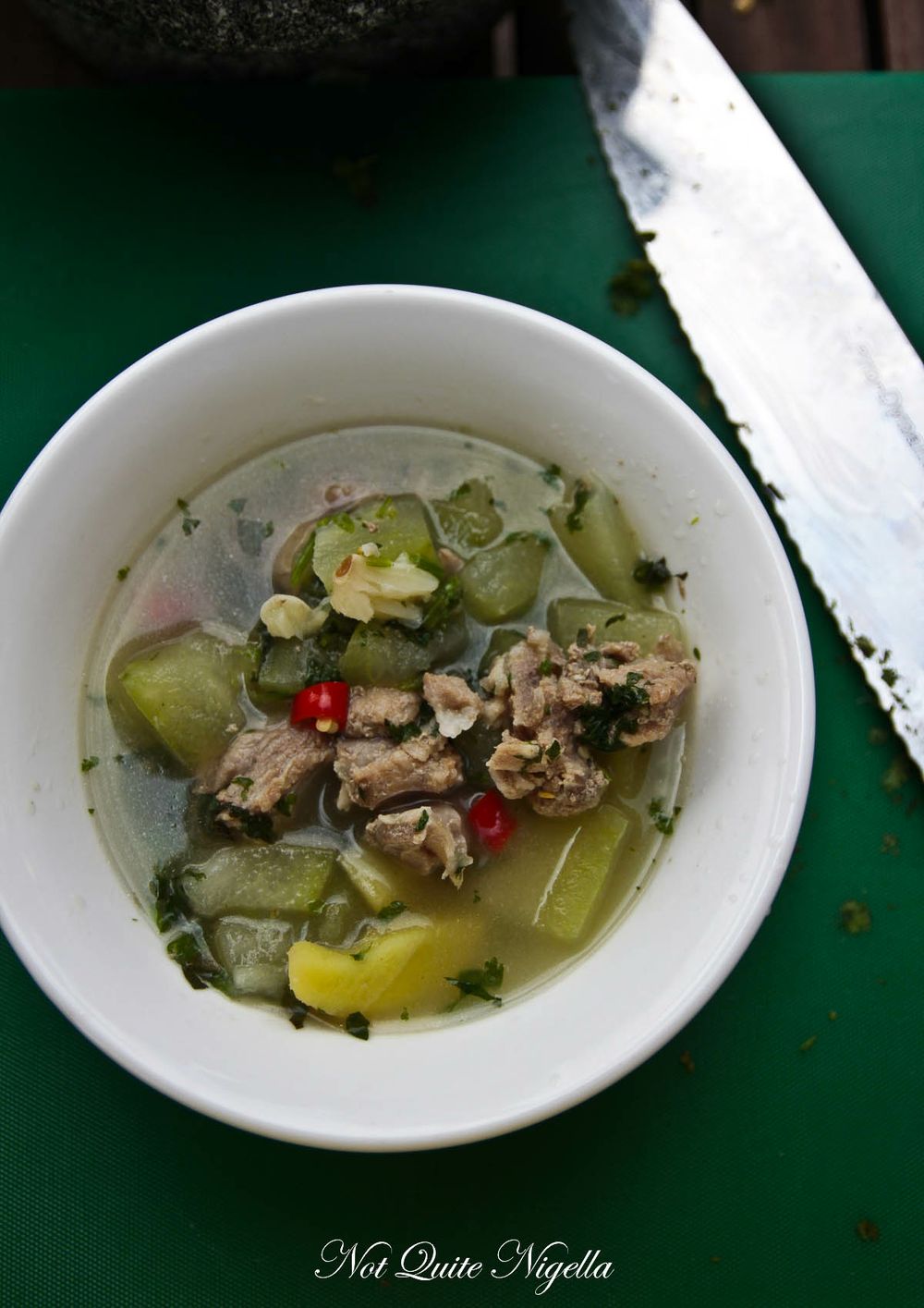 We start with making a simple dish: pork rib soup with cubes of winter melon and basil. We add caramelised garlic, a fat chunk of ginger, a little lemongrass, chilli and winter melon to a pan of pork ribs that are boiling in water  Once the melon is soft we add finely diced herbs and season it. Mi Wei An comes around to taste our soups and comments "not enough salt!" before heaping more salt into our soups. It seems that her palate likes things very salty and this reduces a soup from being what we considered seasoned to something very, very salty. 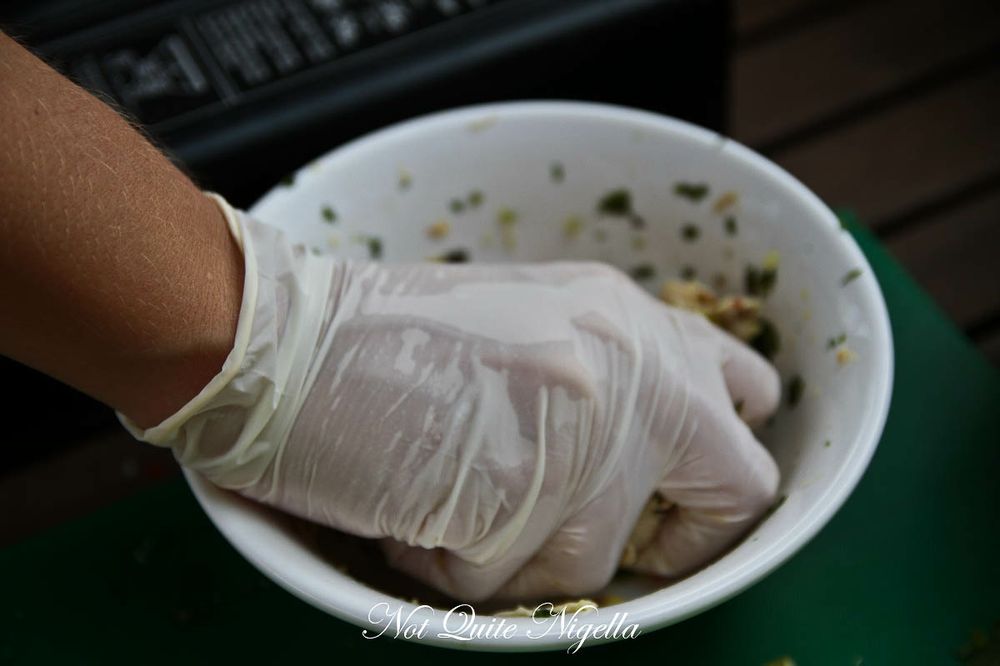 Our next dish is a Dai lime chicken salad that introduces us to a new method in cooking. Poached chicken shreds are seasoned with finely chopped ginger and caramelised garlic as well as French and regular coriander, local basil and chilli. We add some salt and then squeeze half a lime and taste it for balance. I add a little more lime and then she instructs us to don our gloves and squeeze the chicken so that the flavours blend together well. This changes the flavour quite markedly and enhances it beautifully. 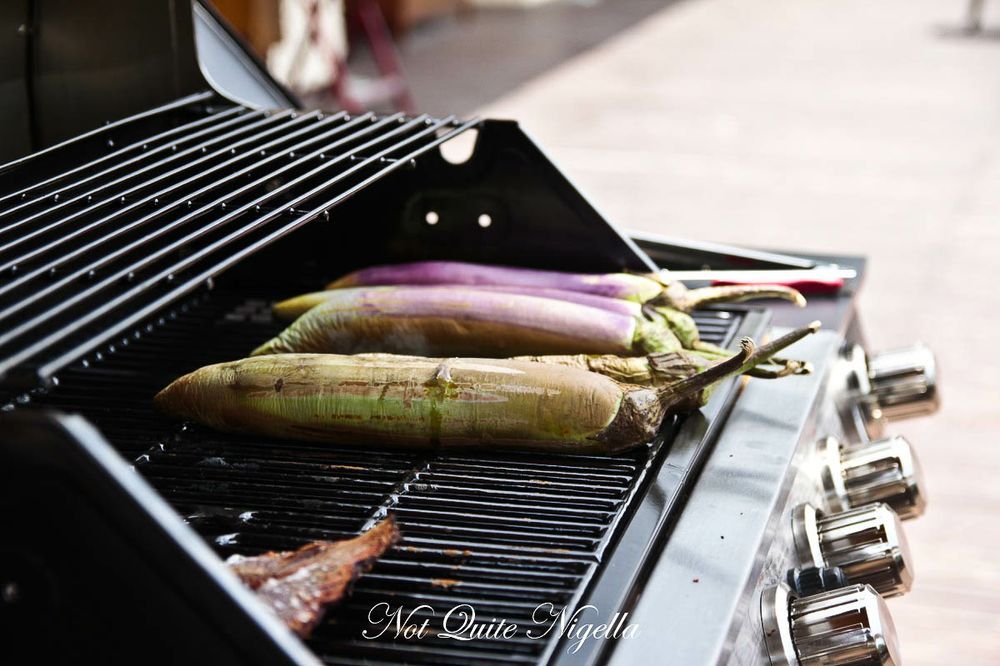 A Dai dish that we requested a recipe for was the grilled eggplant. Little did we know how easy it would be as well as healthy. Eggplants here are long and large-about 30cms in length and one and a half inches in diameter. She starts by pricking a hole in the eggplant to stop it exploding and it is placed on the barbecue where the colour changes from purple to green. 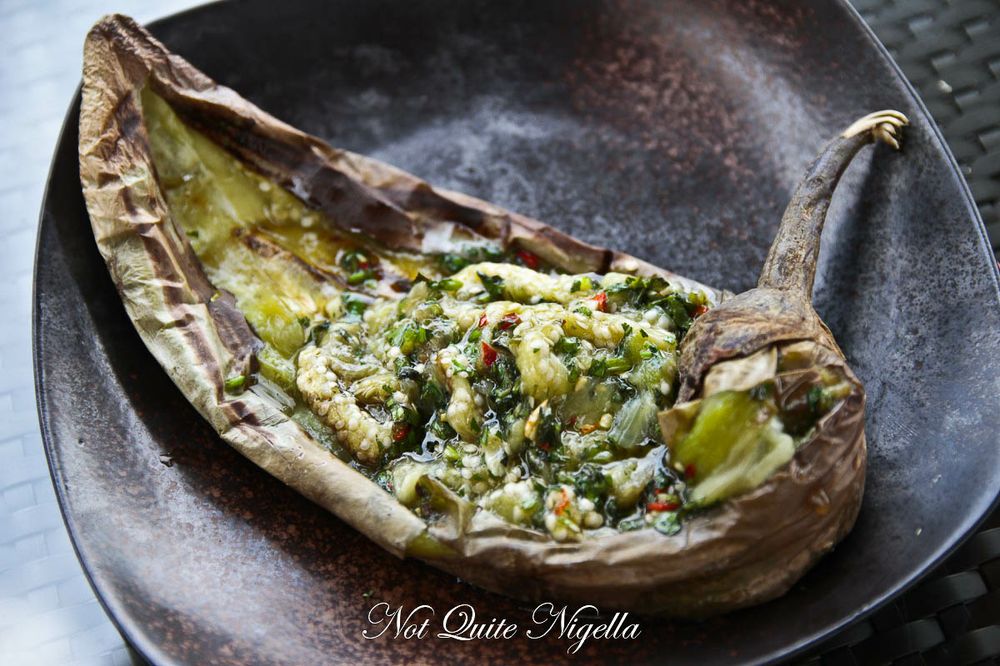 They then split it open and pull the creamy flesh away from the skin and top it with a range of herbs: regular and sawtooth coriander, smartweed, mint, garlic, onion, chilli and basil. The eggplant then slides off the barbecue easily, the flesh is easily removed and mixed up and served. 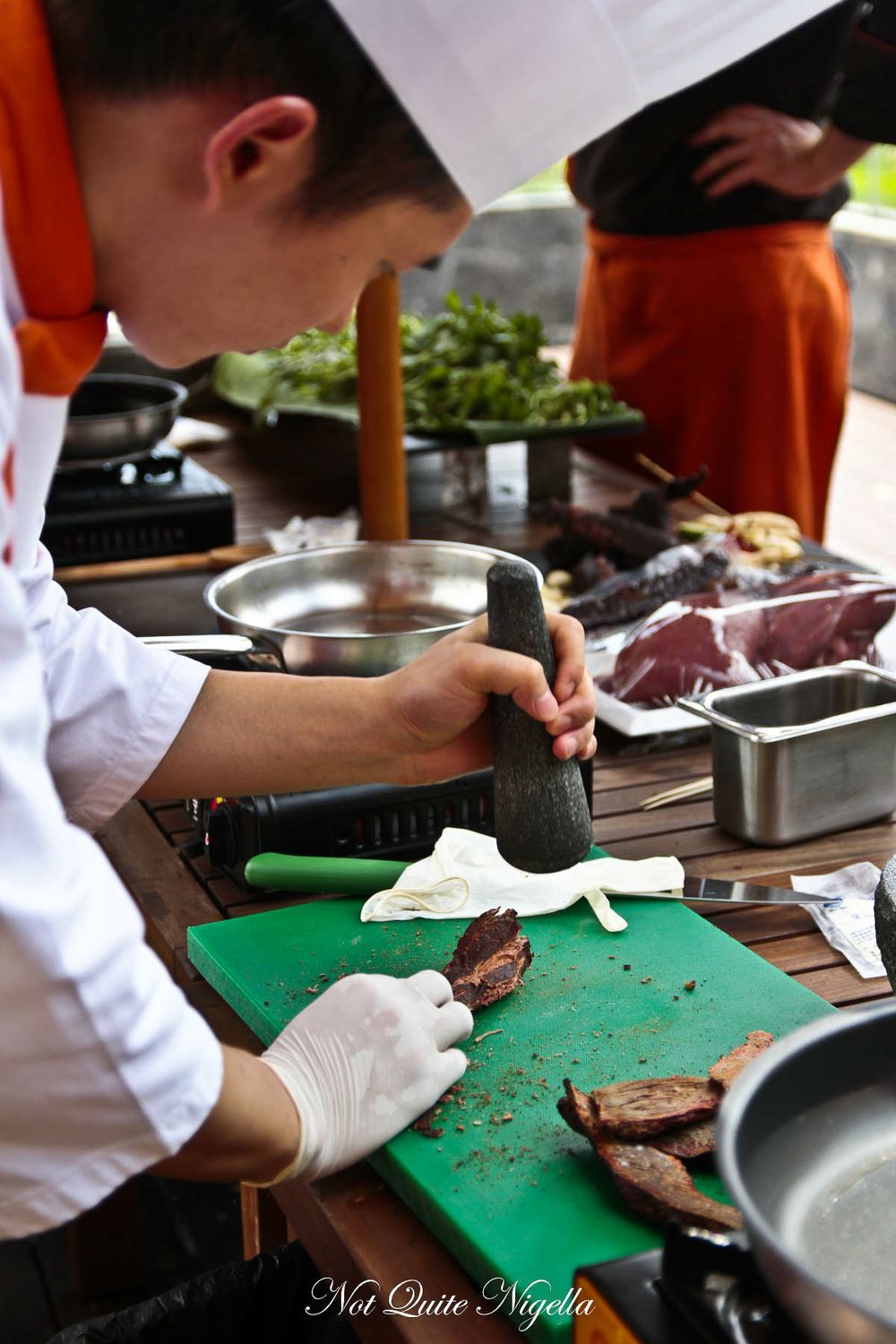 Our next dish uses the ganba or dried beef rump. To make ganba, they salt and dry the beef over coals or fire using residual heat so the time taken to dry it depends on the amount of heat left in the coals. Then they use the barbecue to reheat the meat to soften it. Then it is separated into strands and pounded in a large mortar and pestle and seasoned with herbs and chili. The resulting dish is delicious, like a pork floss but less sweet and with a fresh herb and chilli flavour. 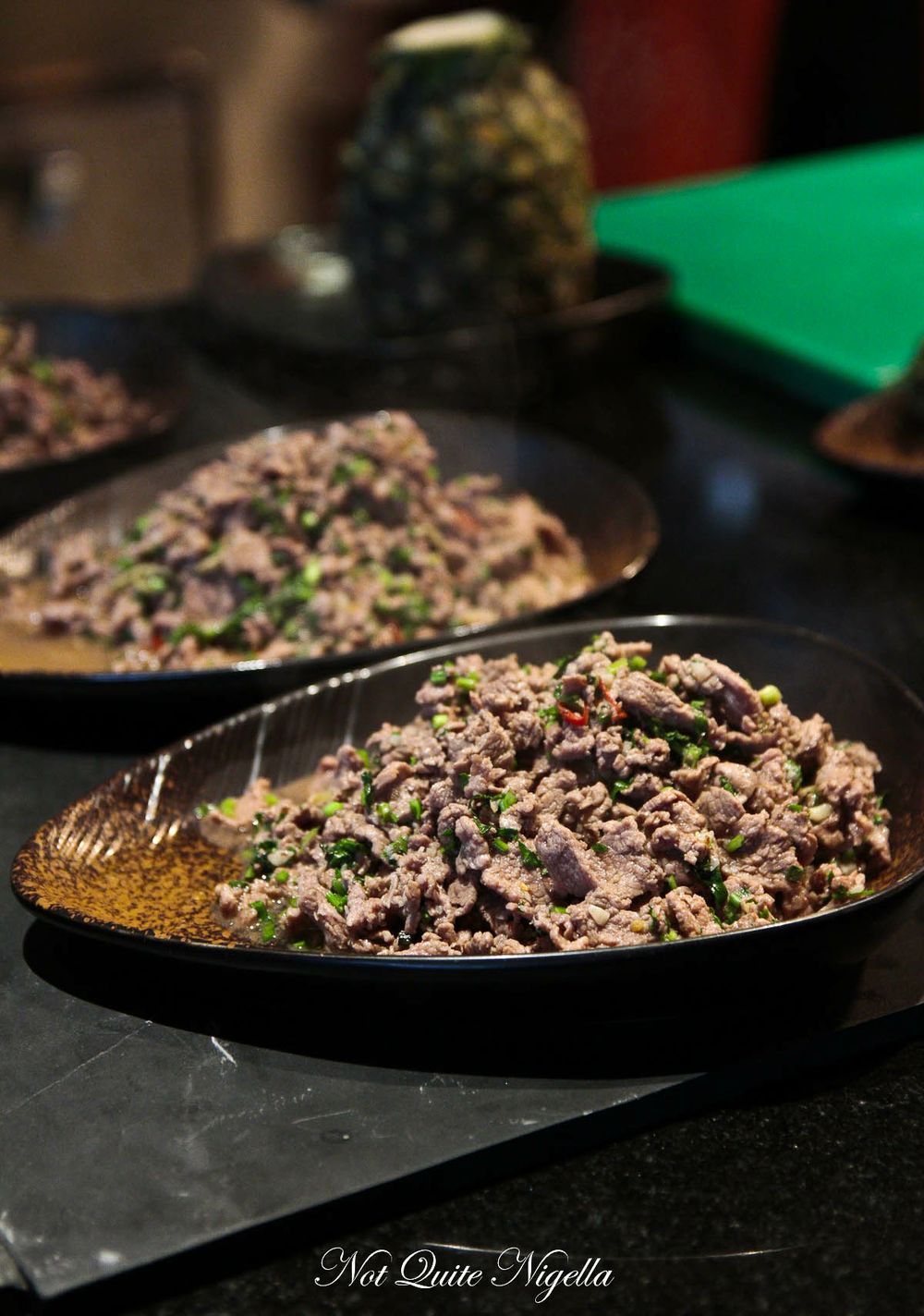 The stir fried beef tenderloin is next and we watch as she slices up a large piece of beef tenderloin. Anantara chef Nick then heats up the wok to high and adds oil and fries up some garlic, lemongrass and chillies and then adds the beef. A handful of chopped herbs are added and it is served with the hollowed out pineapple filled with sweet pineapple glutinous rice. It's a match made in heaven. 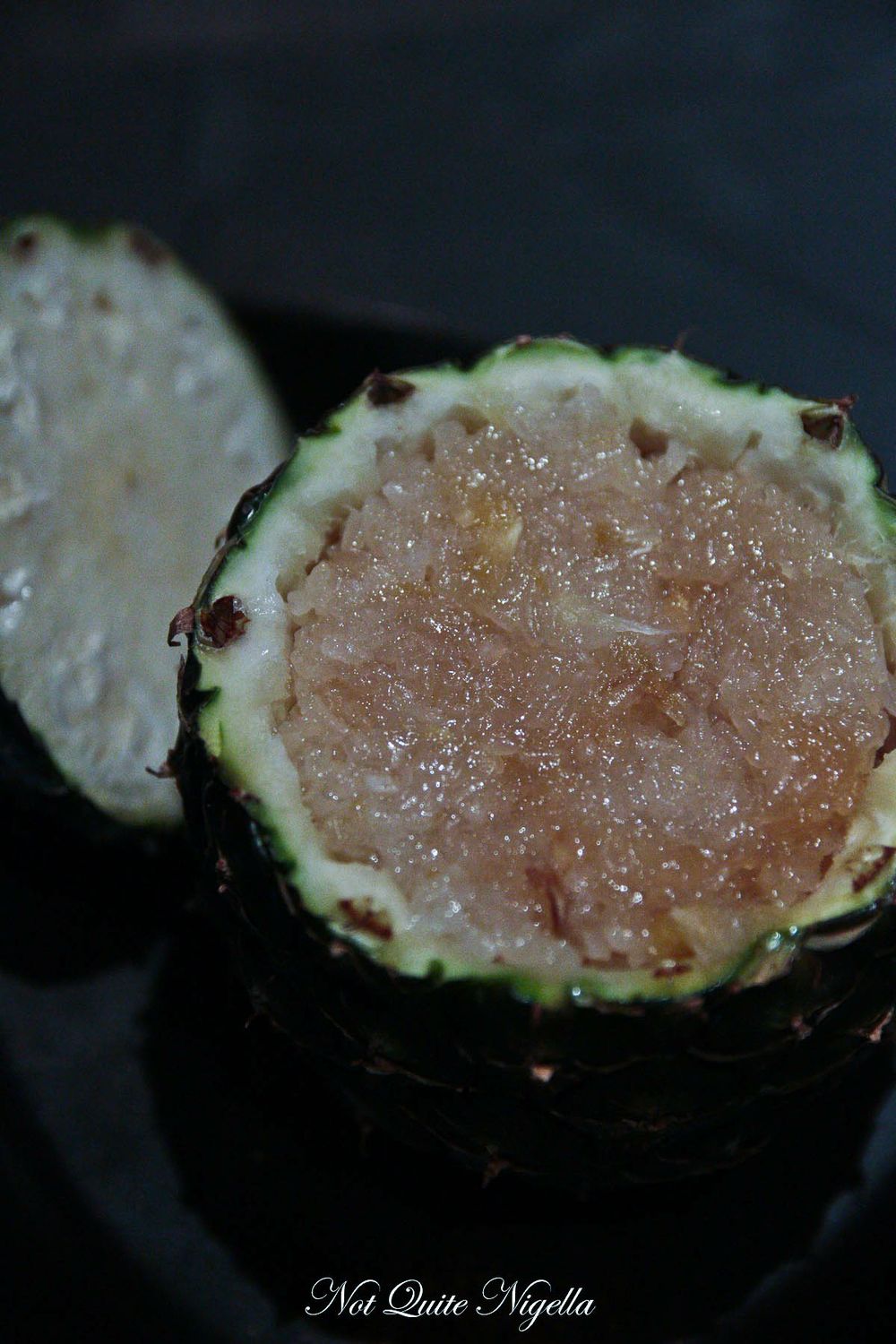 A few hours later I head back to the Luosuo restaurant for dinner. Tonight's dinner is based on the cuisine of the Dai people but with different dishes from what we had tried. One of the signature dishes of the Dai is food that is cooked in bamboo -the fresh, green local bamboo is split in half horizontally and then filled with a range of ingredients from fish, prawns, pork and chicken and this is cooked within a leaf to keep it moist. This is then cooked under ground in a similar way to a New Zealand hangi.  They use herbs and spices like lemongrass, coriander as well as chilli. 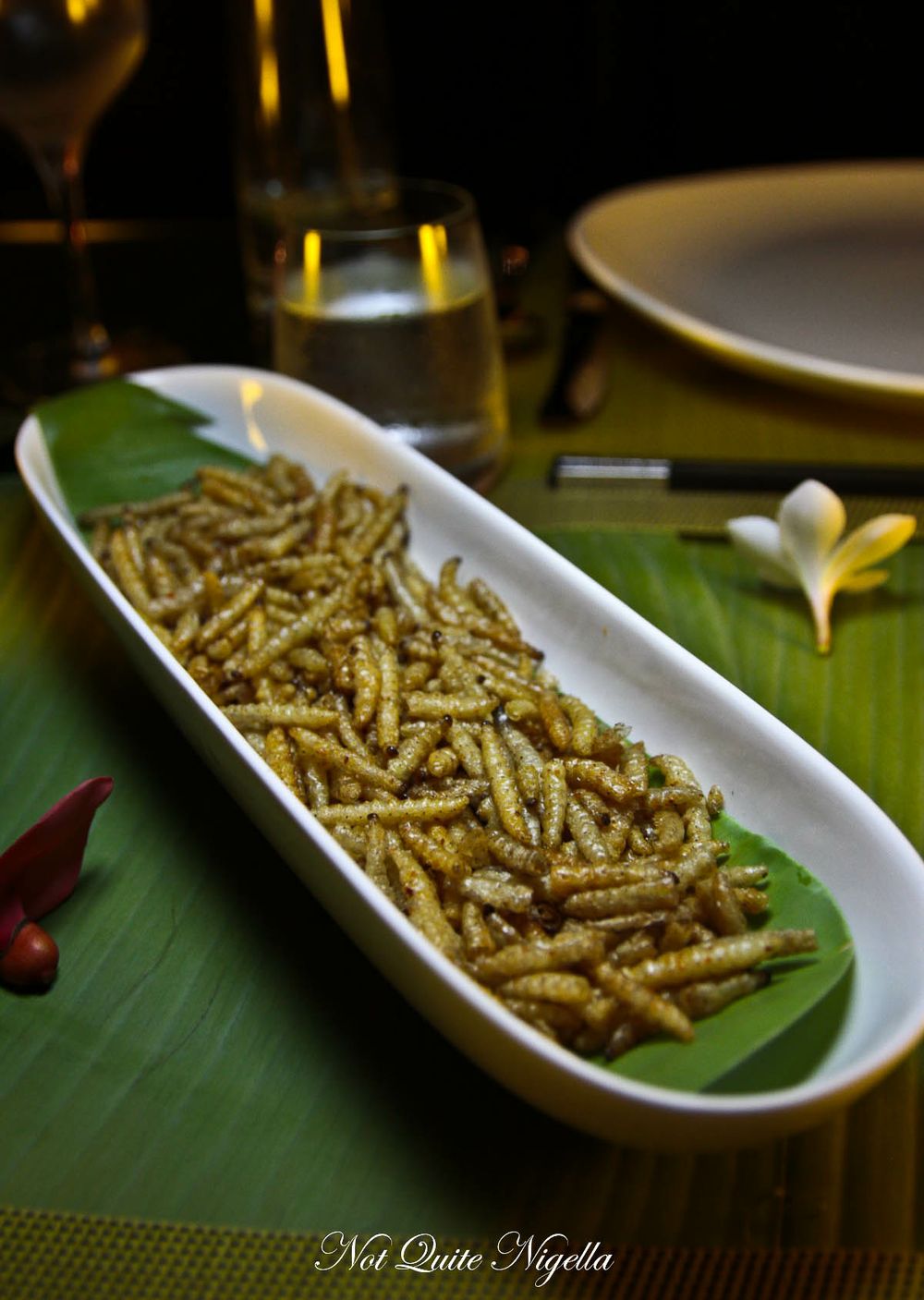 We start with some new tastes-bamboo worm to be exact! These tiny little critters are fried and light and actually very mild in taste. They're not unpleasant and are crunchy and airy inside like eating really light puffy crackling or puffed rice with a slightly different flavour. 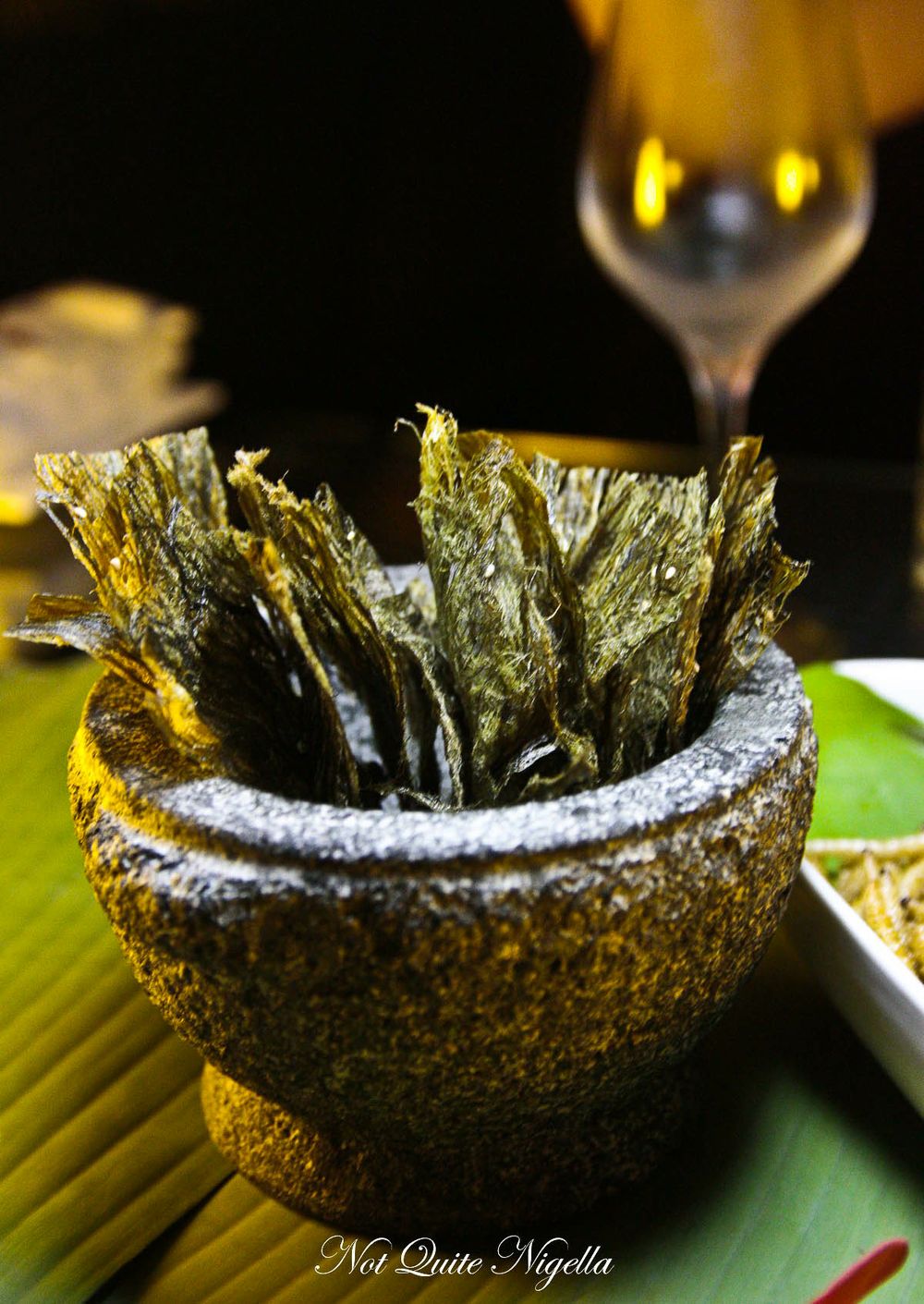 The local riverweed is a taste similar to dried seaweed although  the texture is stringier than seaweed and less uniform. 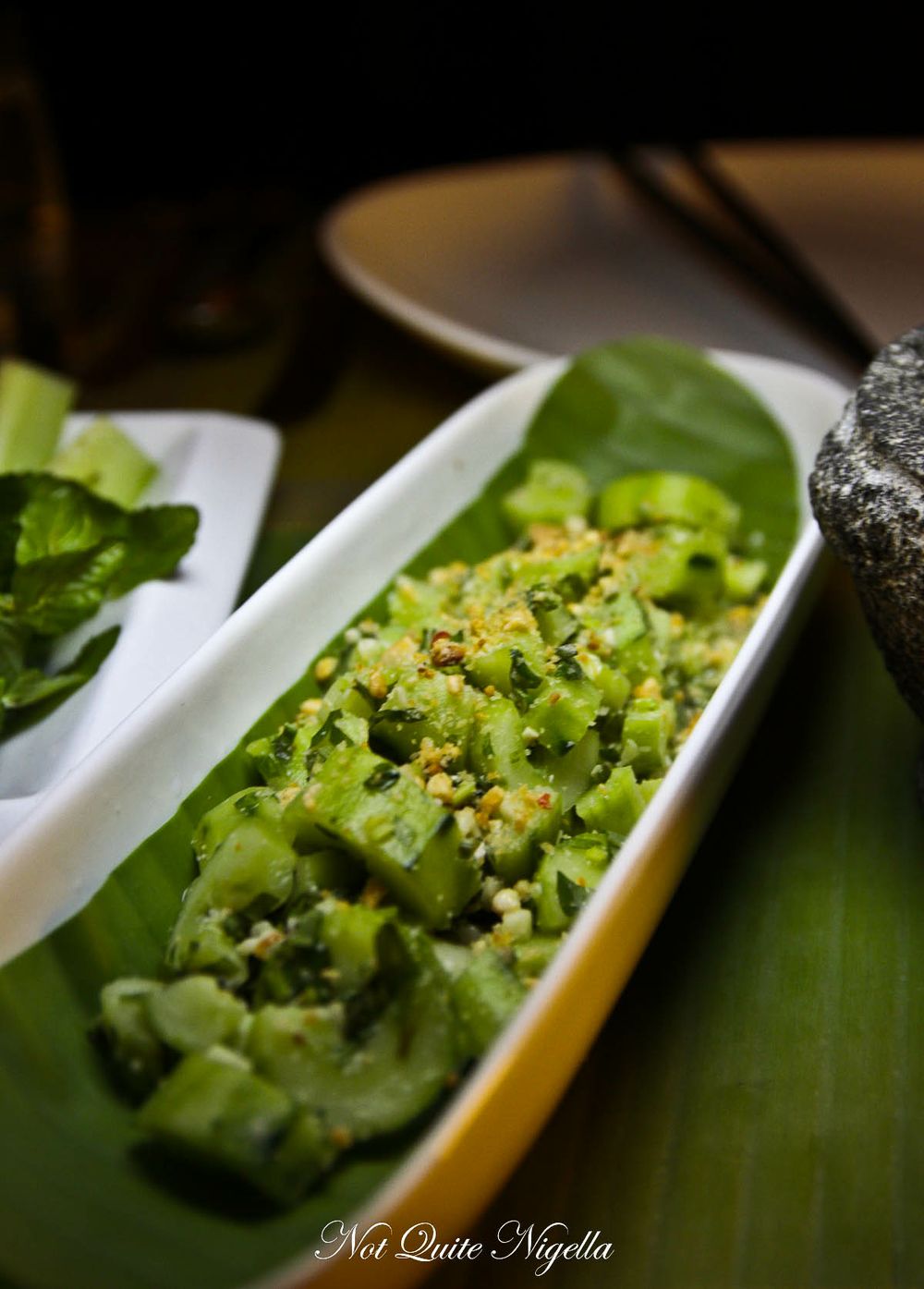 The surprise favourite is the cucumber salad. The difference between this one and others is that they use crushed, toasted peanuts in this which adds texture and an additional flavour to it which I shall be doing when I get home come cucumber season. 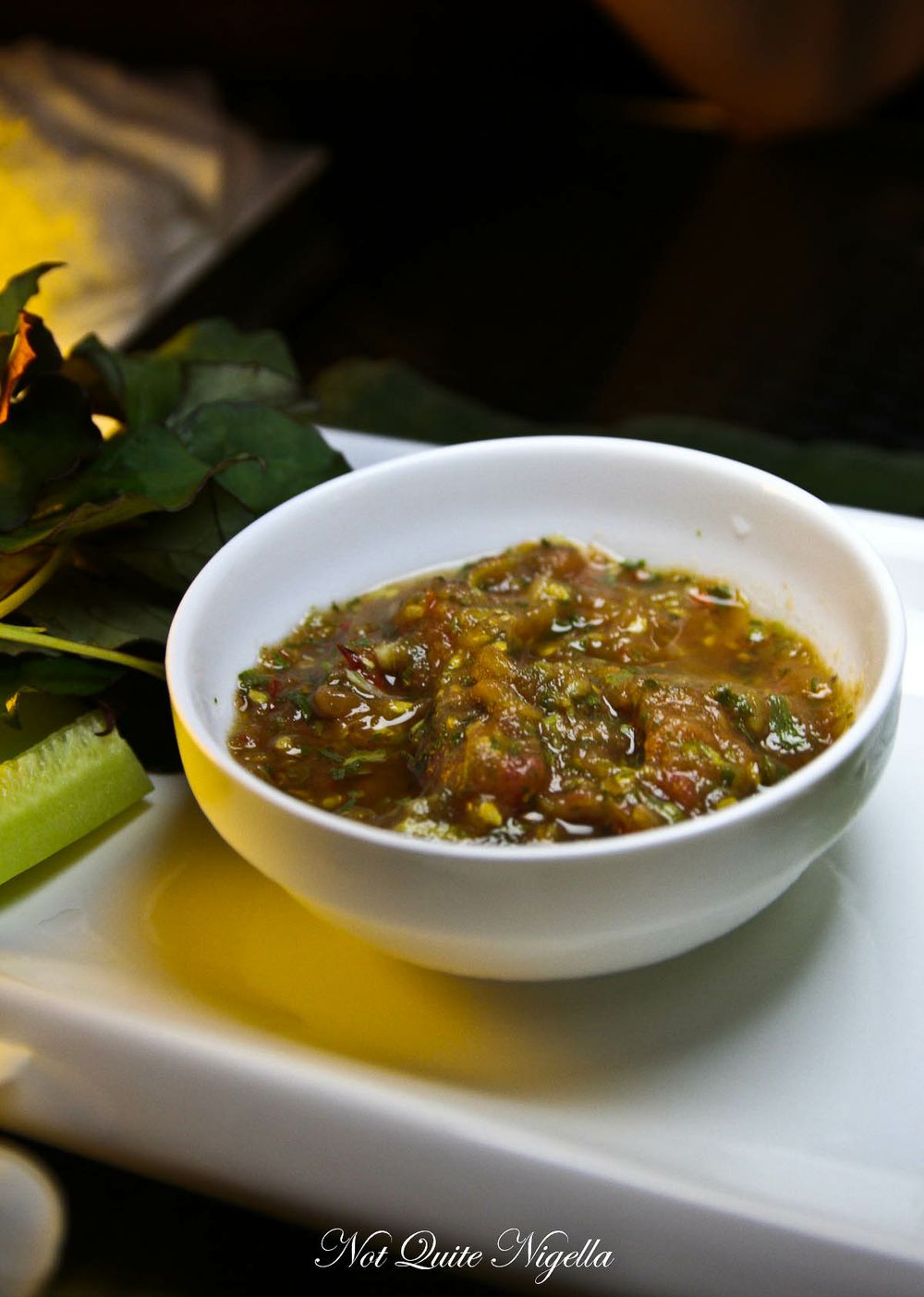 The nanmi was a dip made out of tomatoes and served with herbs and cucumber. It's quite nice although it too is quite mild in flavour. 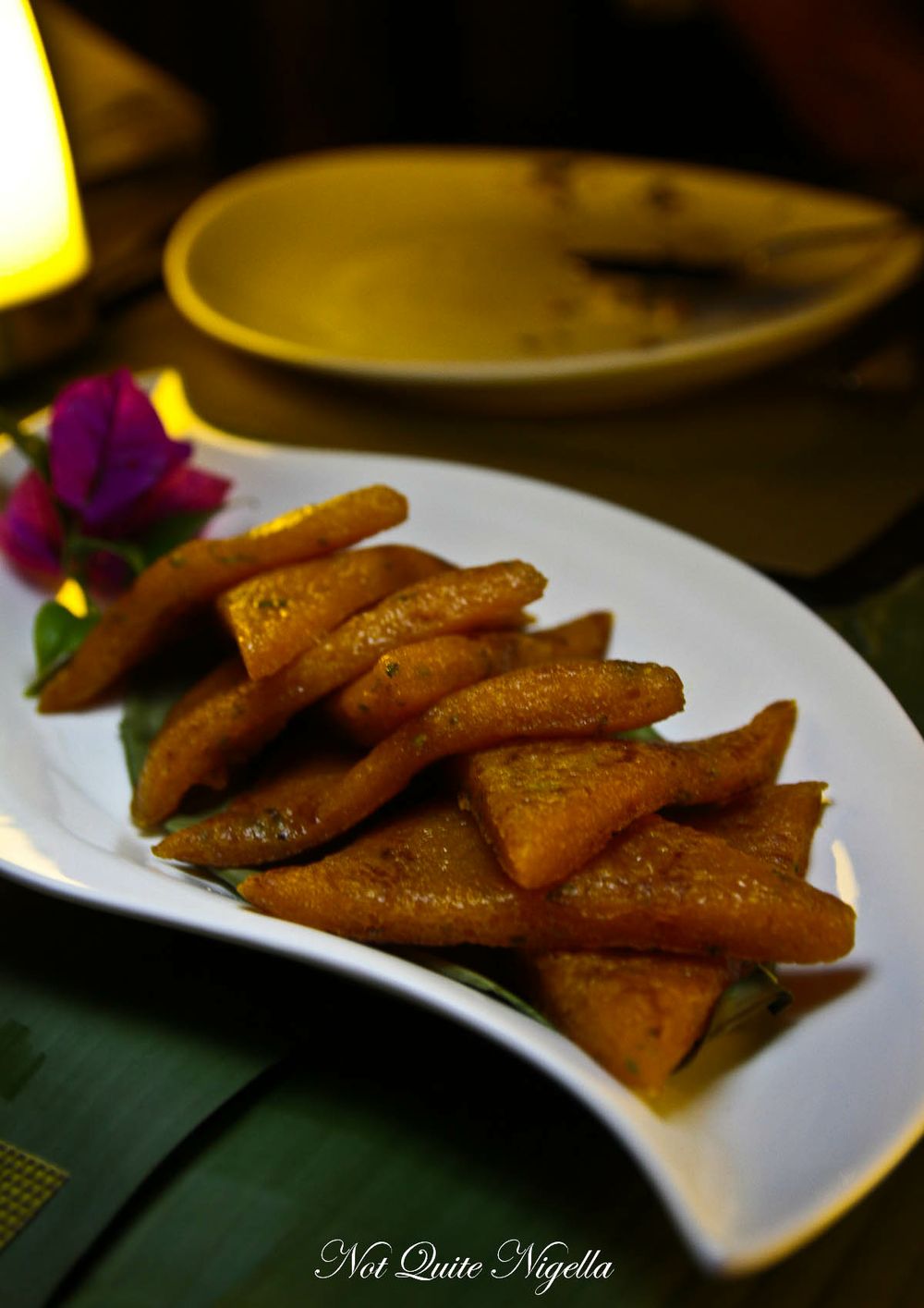 The pumpkin triangles are delicious little numbers, reminiscent of Chinese New Year cake in texture and flavour. The pumpkin is sweet and the pieces have a little caramelisation on them from the pan. I resist the urge to eat more and I'm unsure of how many more courses we are getting! 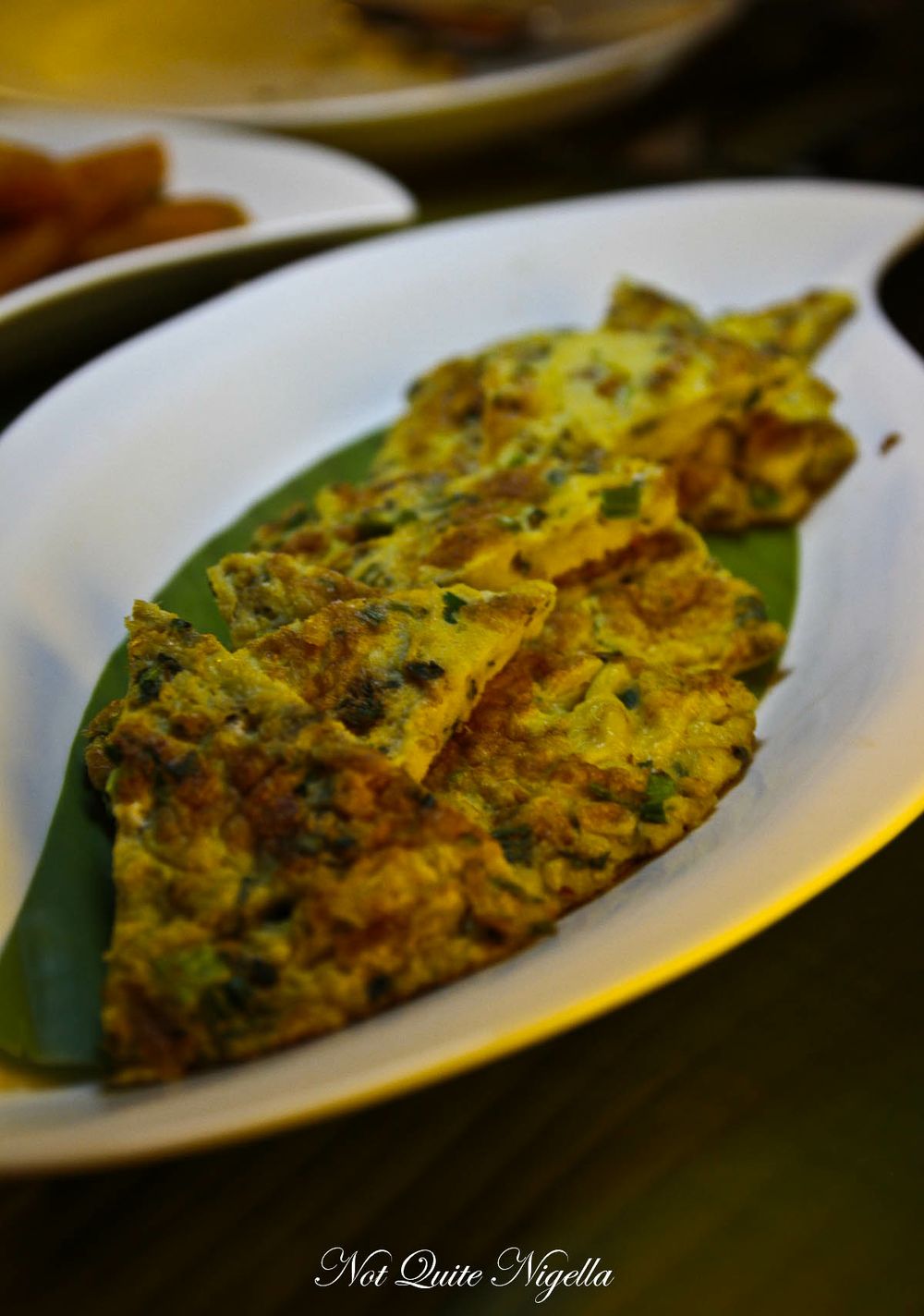 The omelette is also served as wedges and is made with local vegetables, eggs and herbs. 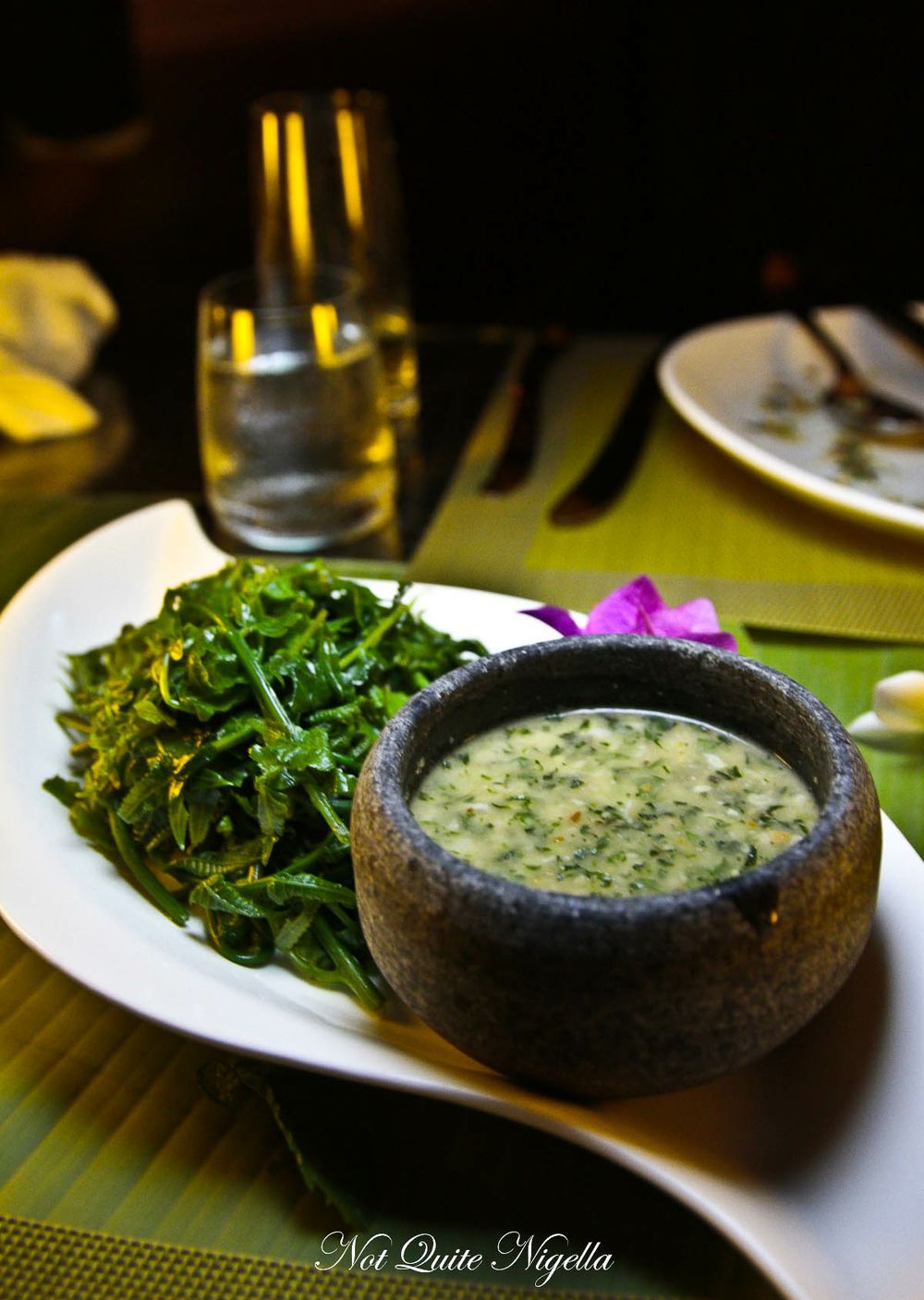 The peanut nanmi is a dip or soupy peanut sauce with plenty of herbs that you spoon over vegetables or salad. It is served with blanched fiddlehead ferns which have a pleasant texture and a mild flavour. 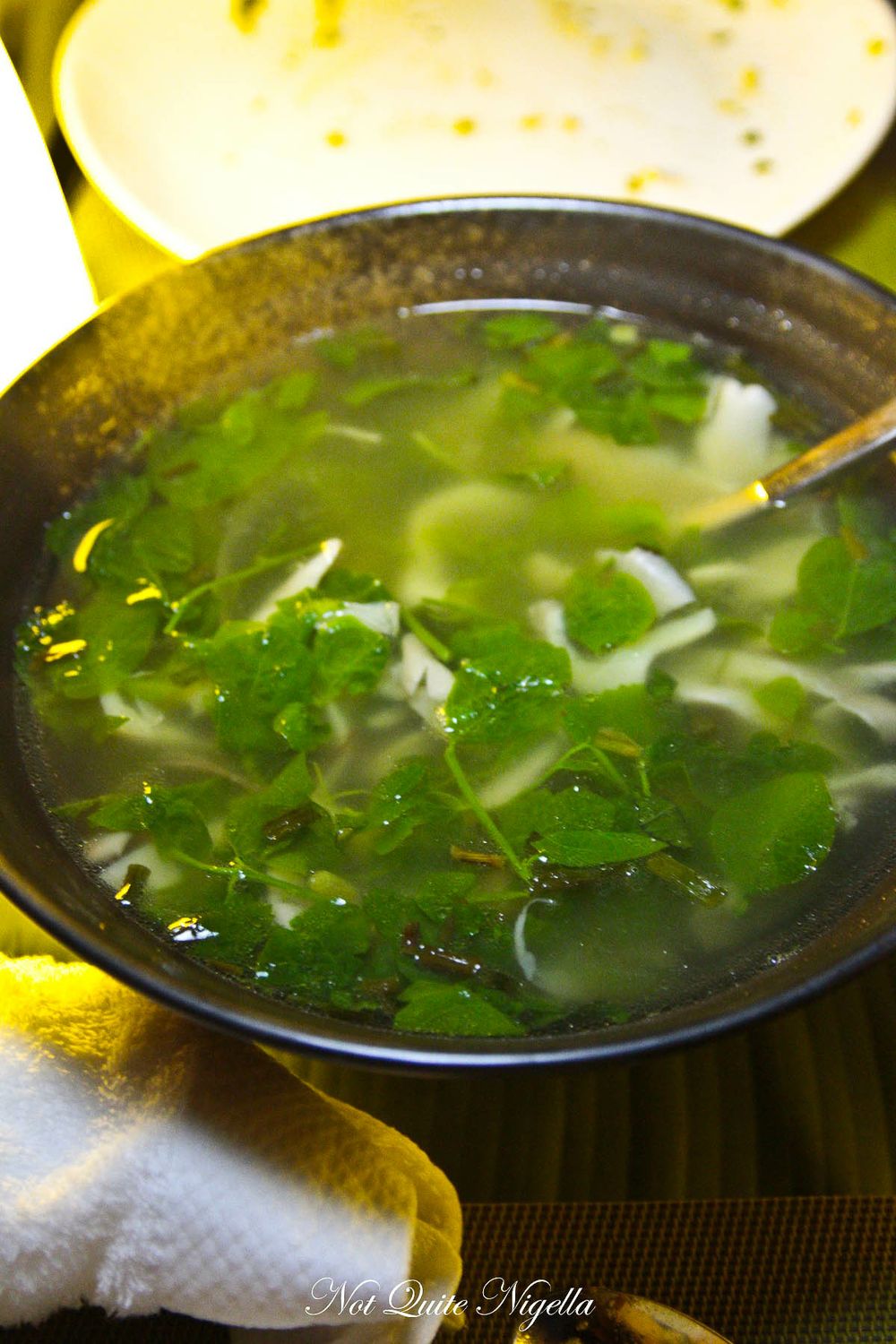 A large pot of ganba or dried beef soup arrives at the table. It's a meat broth filled with thinly sliced white mushrooms, little pieces of rehydrated dried beef and vegetables. 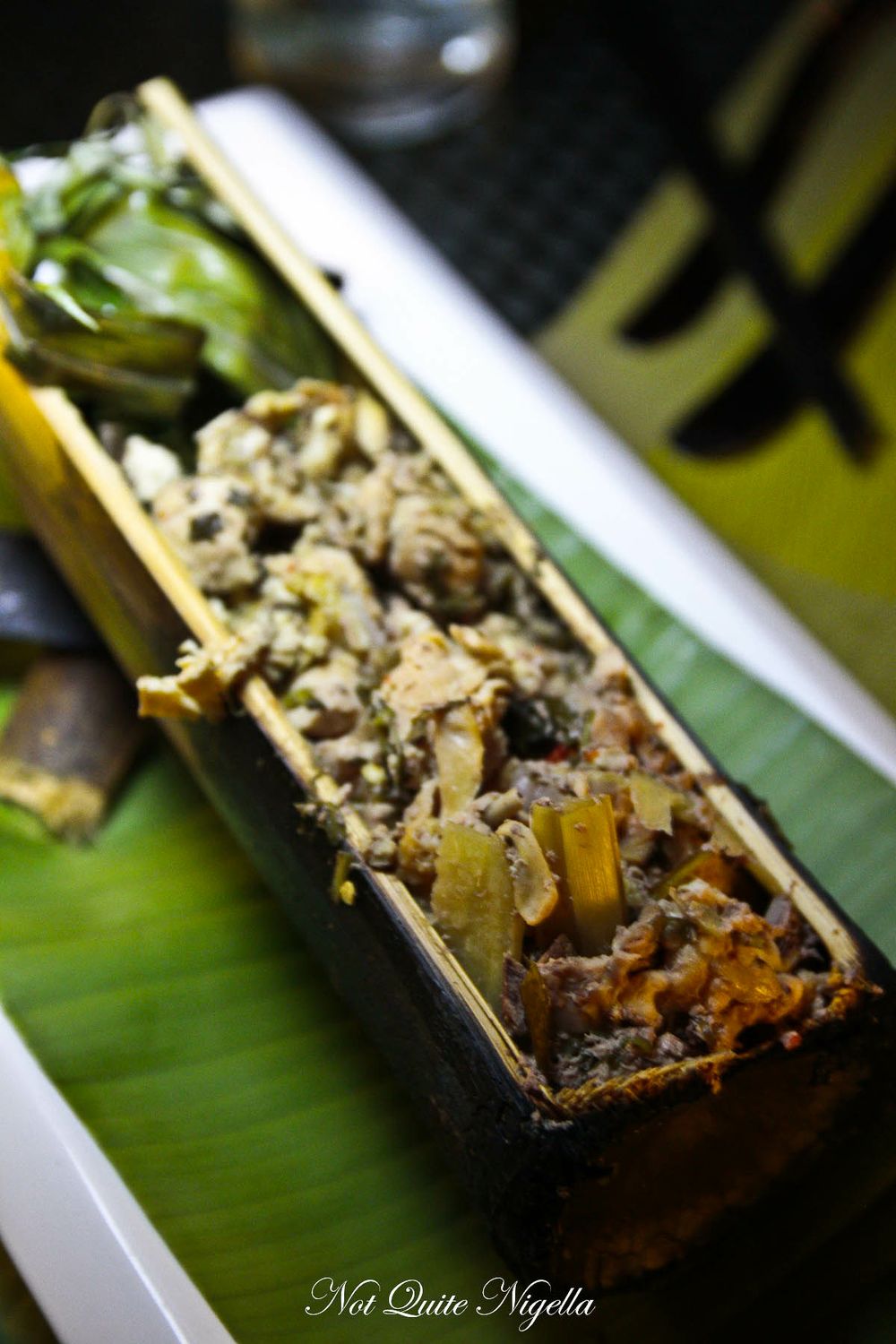 The bamboo meats come out in succession and we start with chicken, with little pieces of bone-in chicken cooked with lemongrass. There's a bit of splintered bone in it but the chicken meat is delicious. The pork is next and that's a favourite for me with the juicy little pork pieces. After that is the fish which is garlicky and spicy, another favourite and then prawn which is made up of tiny little prawns. 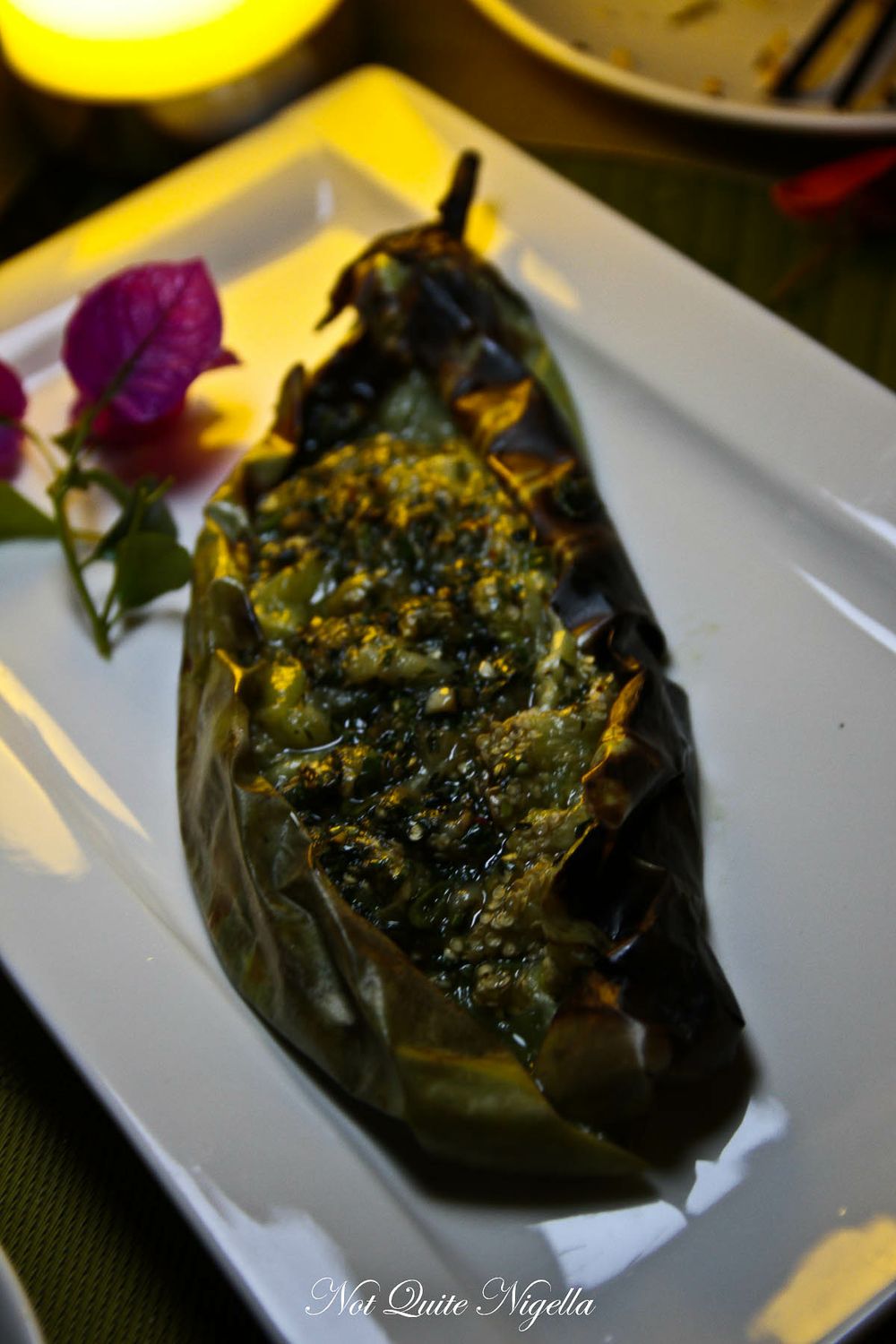 The eggplant is a large, split eggplant that is so soft and creamy. The fibres of the eggplant appear as mozzarella strings when we lift the soft, jade green flesh from its skin. 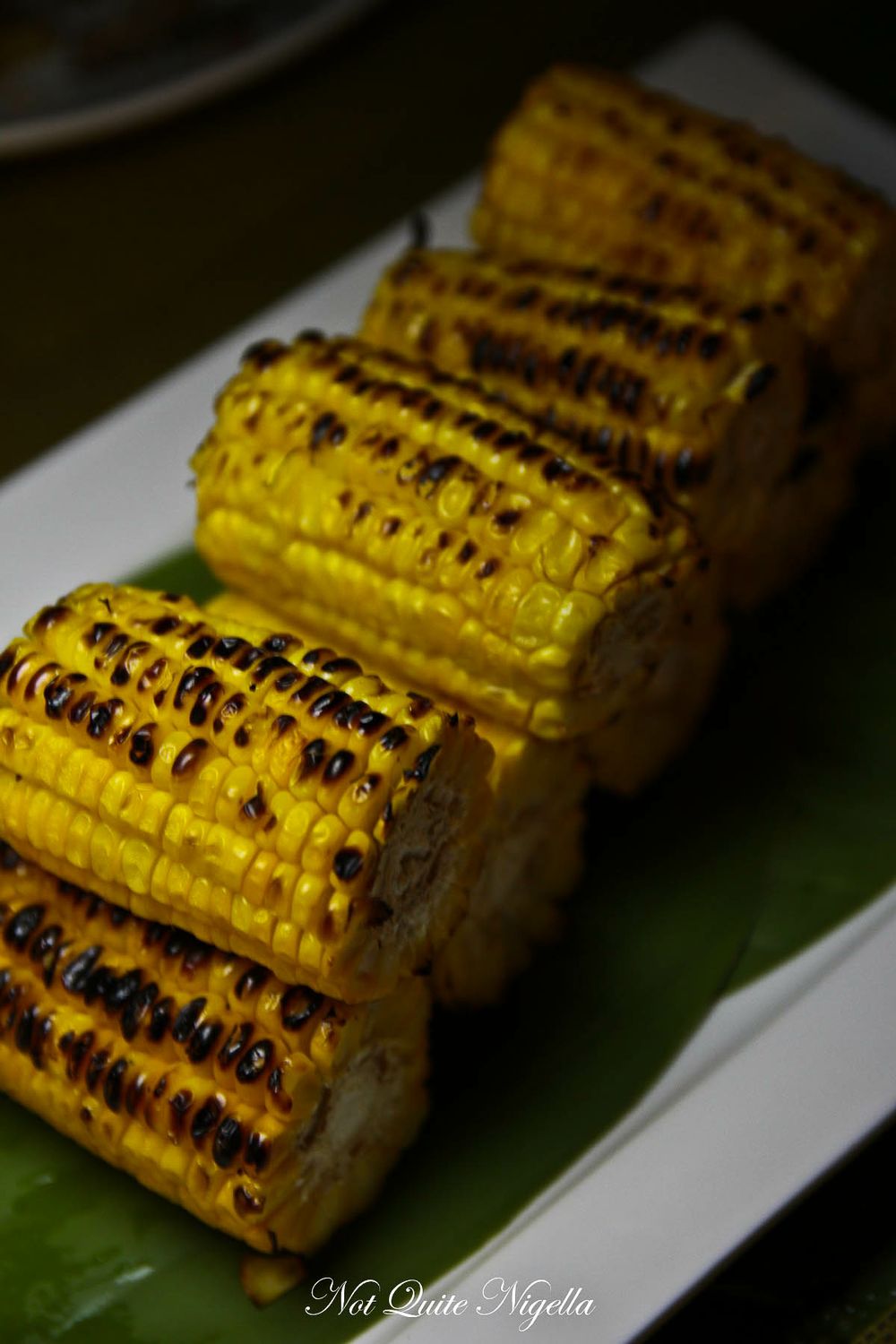 Our last vegetable is grilled local corn, cooked simply with char on some sides. The corn itself is sweet but a little dry but the sweetness more than makes up for it. 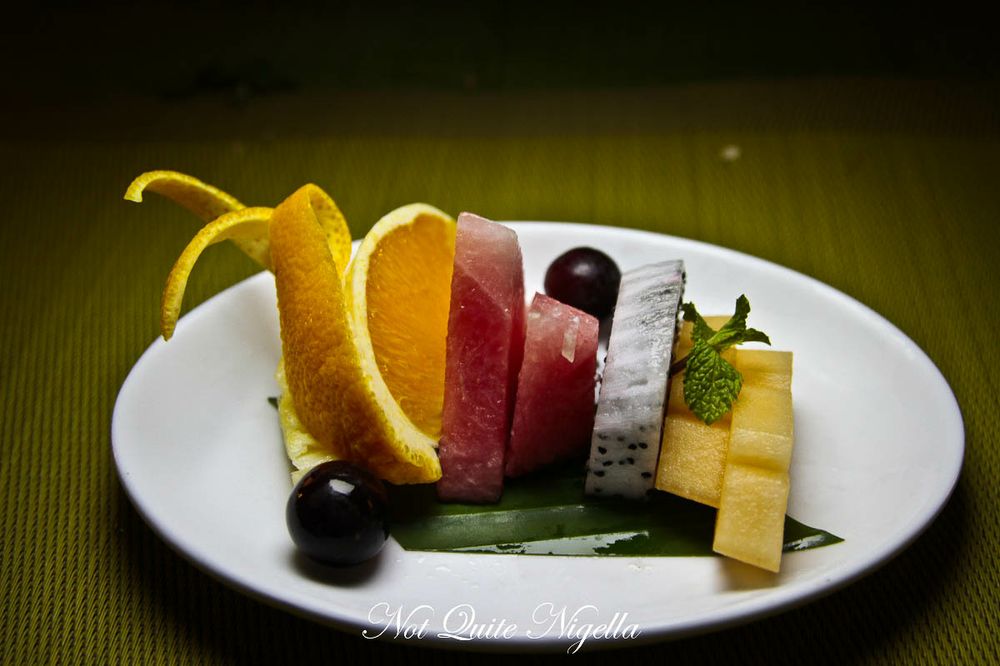 The last taste is a tropical fruit plate. Dai doesn't focus on sweets and with the availability of juicy, sweet tropical fruit, it doesn't need to be. 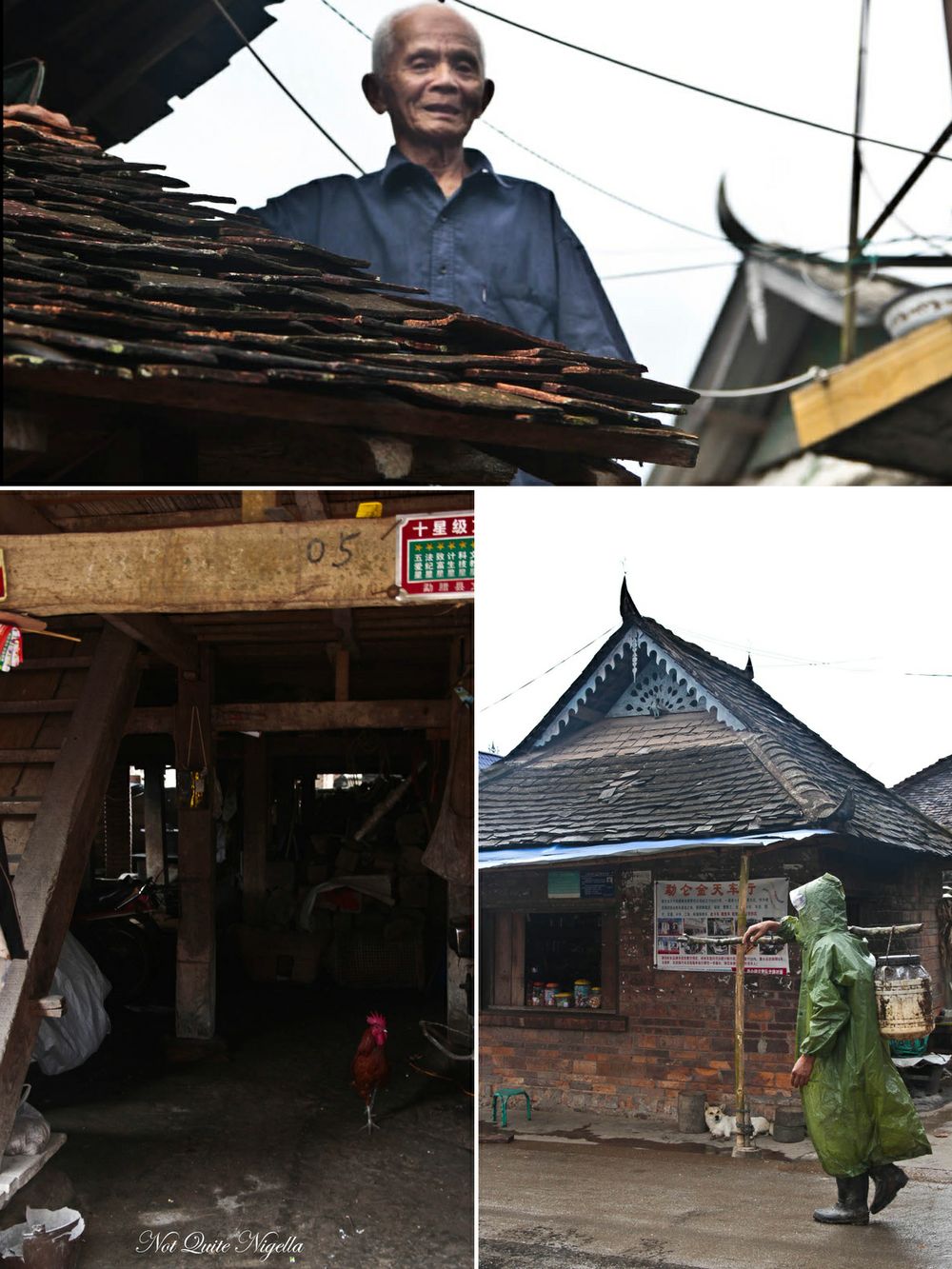 I leave you with one last glimpse of Dai village life in a small village called Mane, a few minutes from the Anantara Hotel. It was lightly raining on the day that we visited but it gave us a good idea about how they live. Each village is given a rating by the government which details the living standards within the village. This village had about ten stars assigned to it. 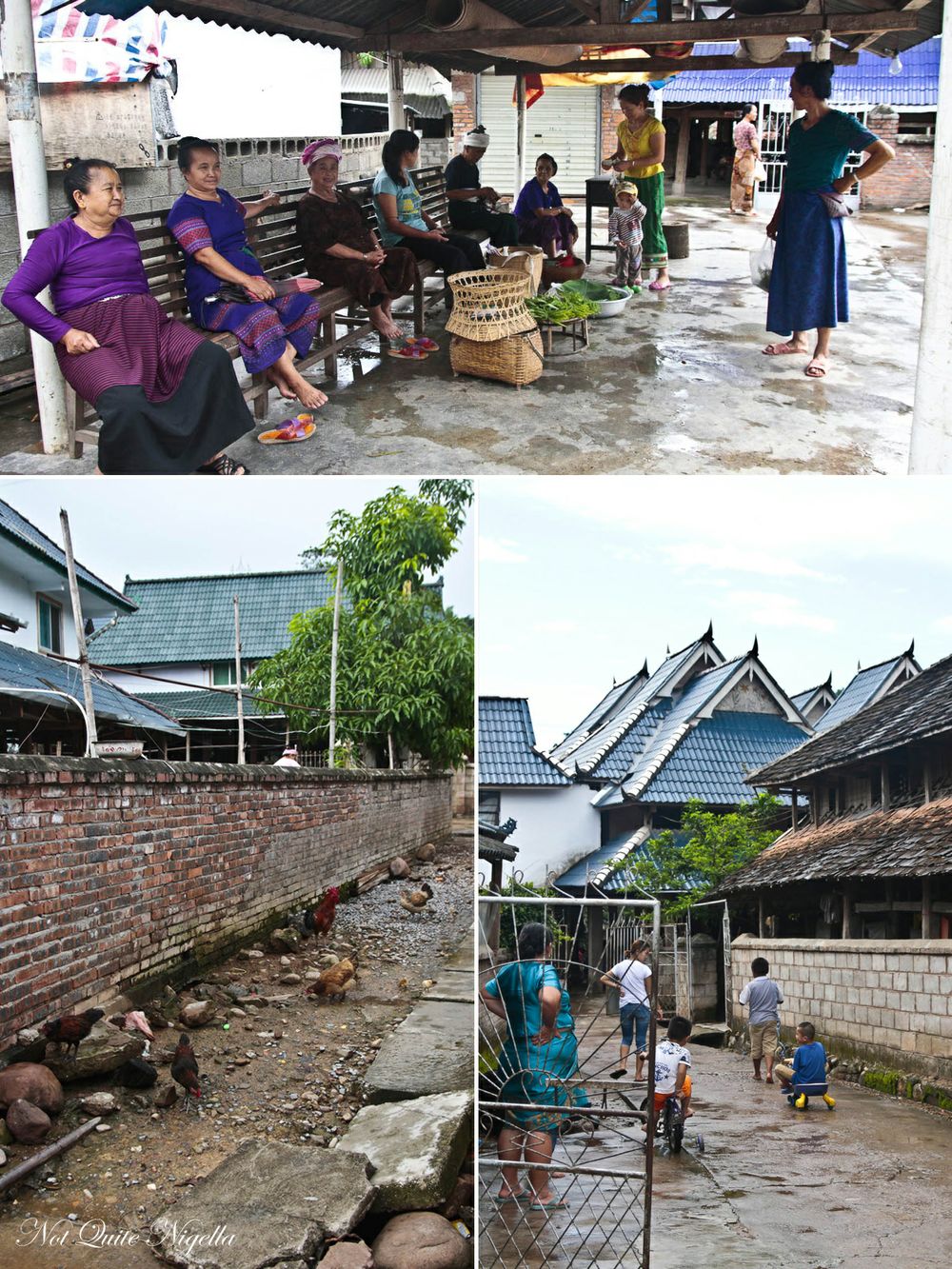 Chickens run around and we hear children playing games on their bikes. There are some groups nearby having a community meeting and we pass a group of women sitting under a shelter with their kids. A young man rides past us on his motorbike and stops dramatically near our bus. He leans forward and waits.

So tell me Dear Reader, I have a cheeky question for you-can you tell the difference between Asian people? You can be totally honest! ;) Until very recently I have to admit that I thought that Wentworth Miller and Channing Tatum was the same person! :lol: 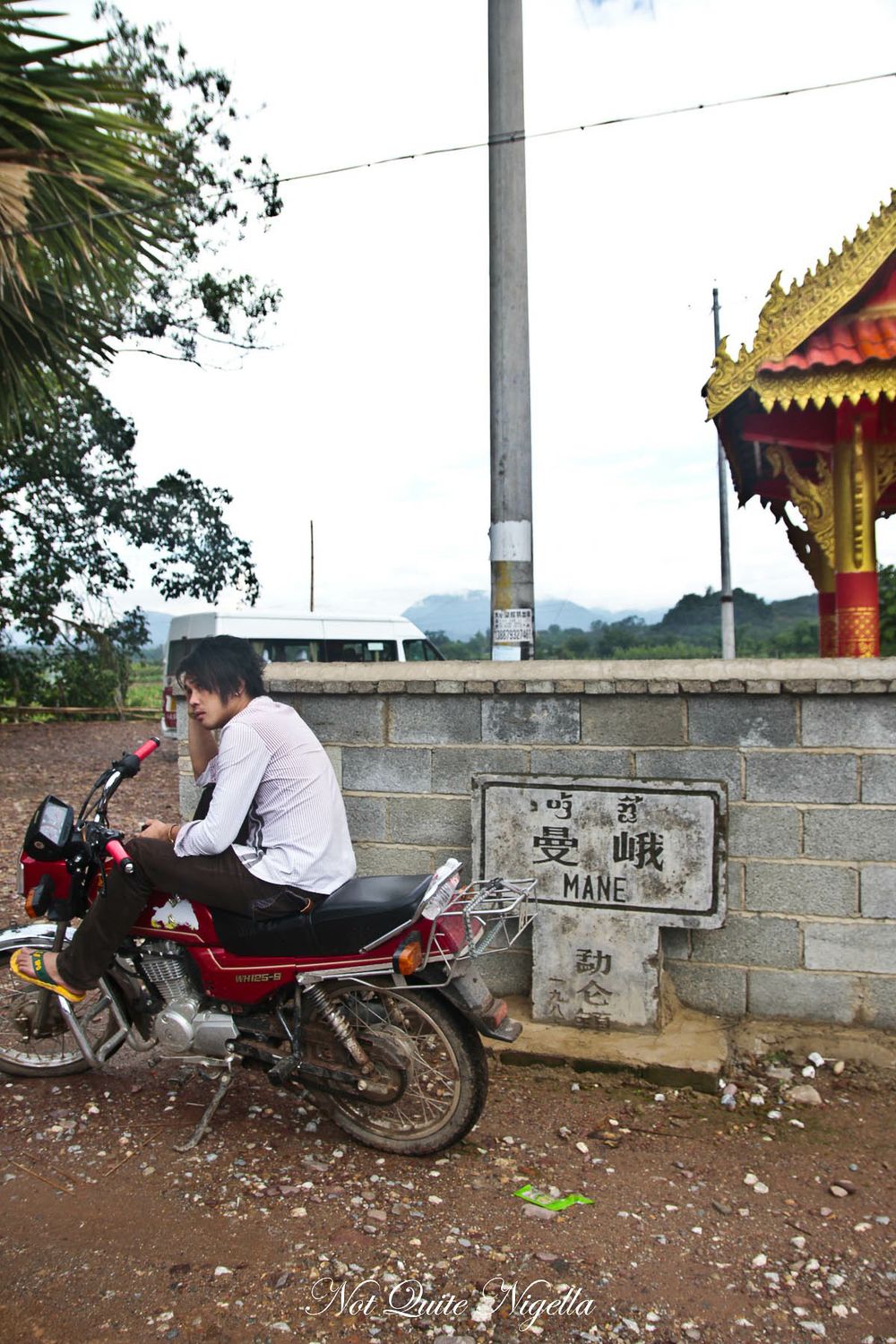