A Night On The Town in Regional China 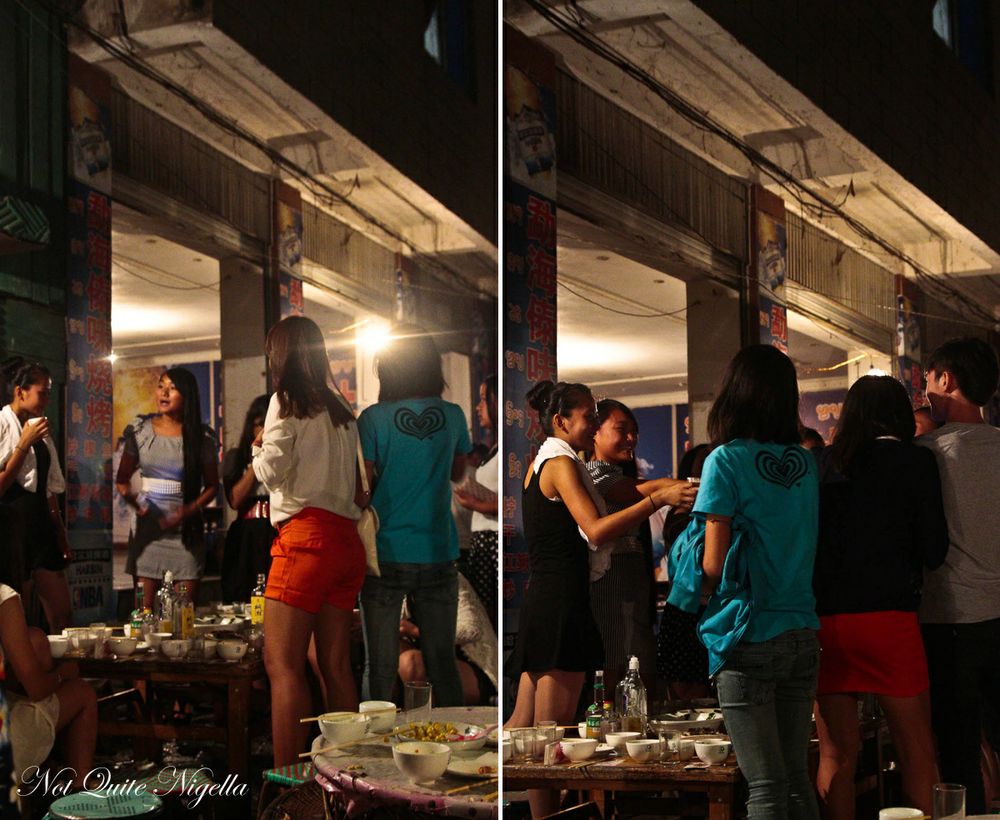 "Shway Shway Shway, Shway...shwayshway" is the chant going up all around us. It's coming from a group of young girls to my immediate right. If you had an idea that regional China was full of austere looks, spartan appearances and quiet peasants working hard in the rice fields, well you would be wrong. 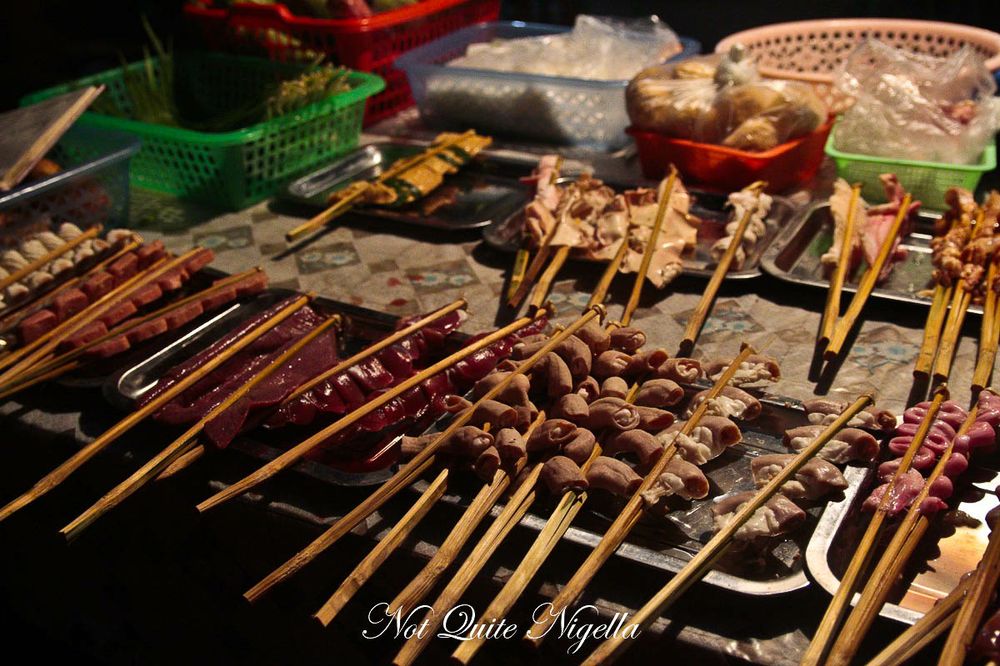 Every evening in this small township in Xishuangbanna the lively main street that we only walked down that morning and seemed relatively dormant, comes alive. People in this town eat early around 5 or 6pm and venture out around 9pm for drinking and snacks. It's around 9pm that we take the ten minute walk to Menglun town from the Anantara Hotel. Foreigners aren't exactly common here but the welcome that we get is warm and jovial and life is relaxed here. We walk past the row of outdoor eating establishments and pull up a stool at one. It's charmingly rustic and some of our group have tiny child sized plastic stools while others perch on higher wooden stools. 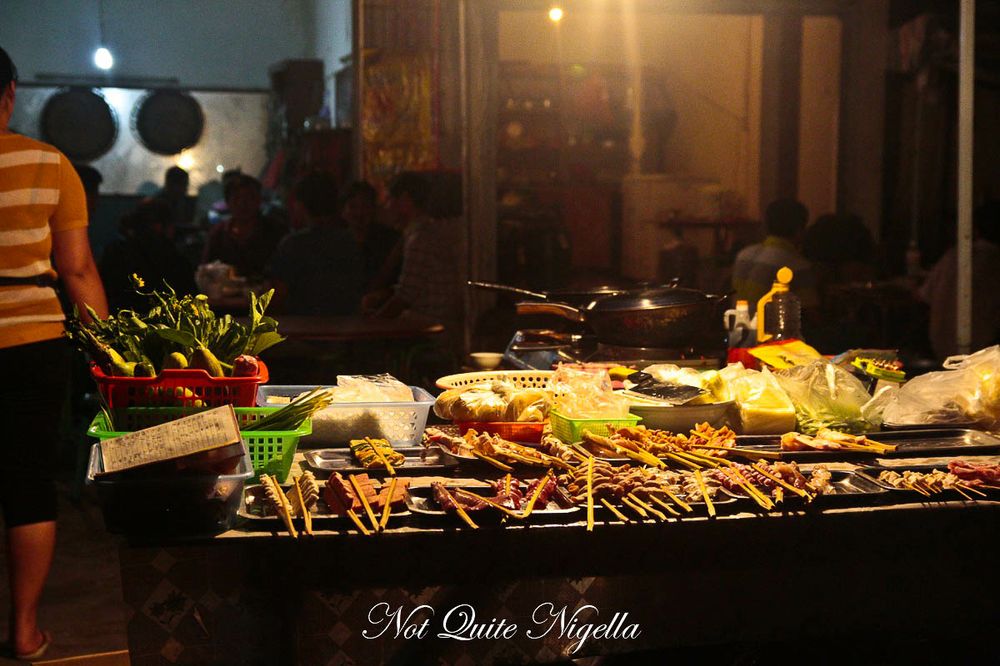 Christophe Wehrung the Executive Chef at the Anantara Hotel and his Chinese girlfriend orders for us in Chinese. Plates of food come out as they are cooked on the outdoor grills and woks and tall bottles of cold beer follow. The food is a wonderful, flavoursome mix. 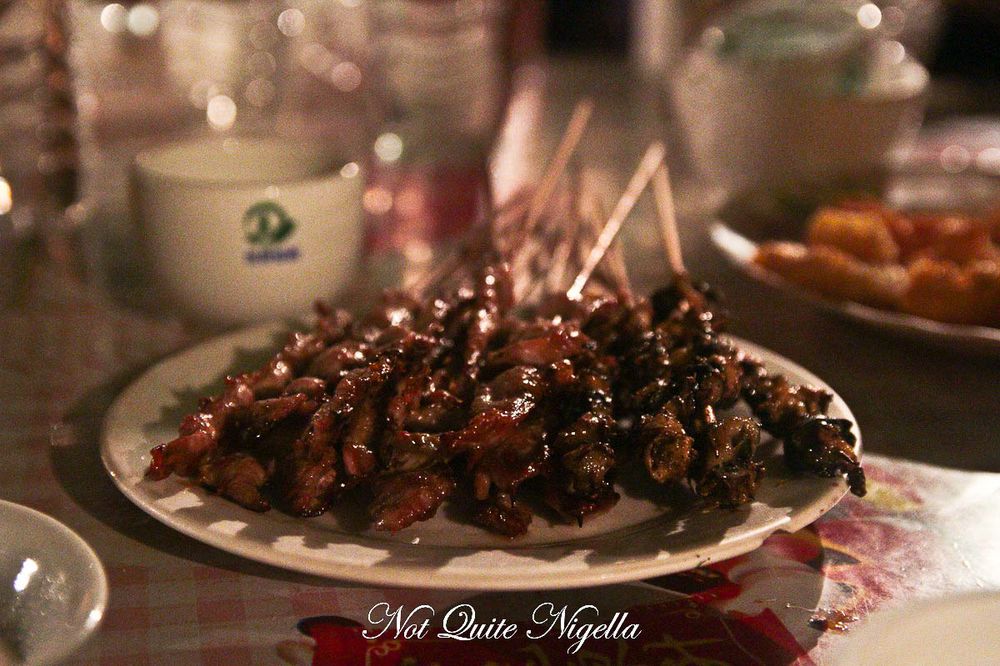 There were two types of skewers-thinly sliced pork and tiny deshelled snails. Both had a nice charcoal flavour to them and were sweet and moreish-the perfect beer snack. Snails have a texture not unlike tender squid and we can't help but wonder how long it would have taken to deshell all of the snails as it had taken us a while at lunch the other day to prise one slippery li'l sucker out. 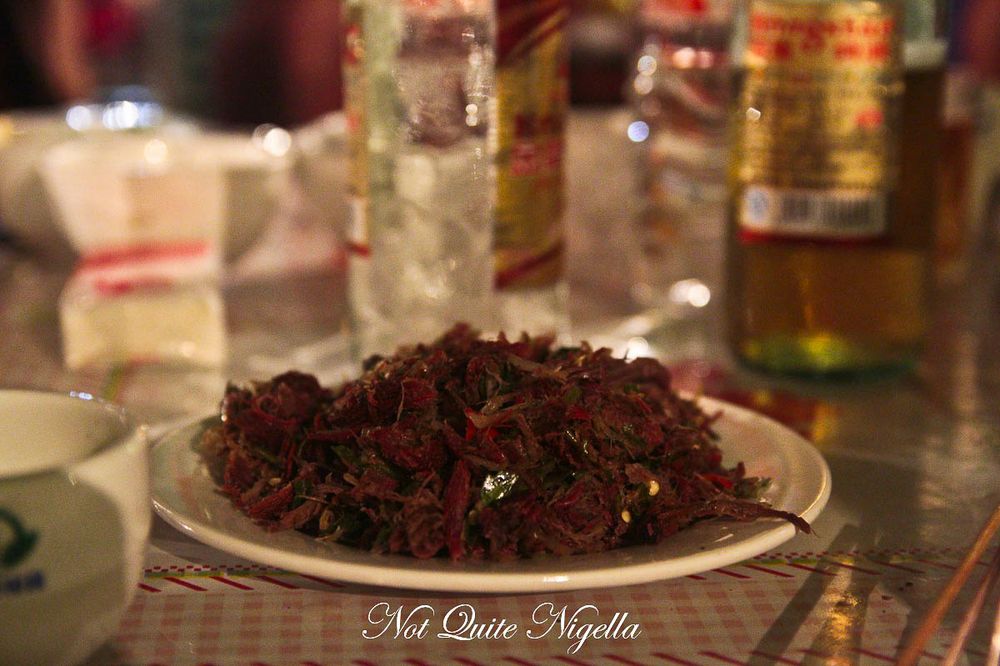 Ganba is the popular beef dish made with dried beef, pounded and finely separated and served with chilli, garlic and onion. The shreds take on a light texture while the flavours give it depth. 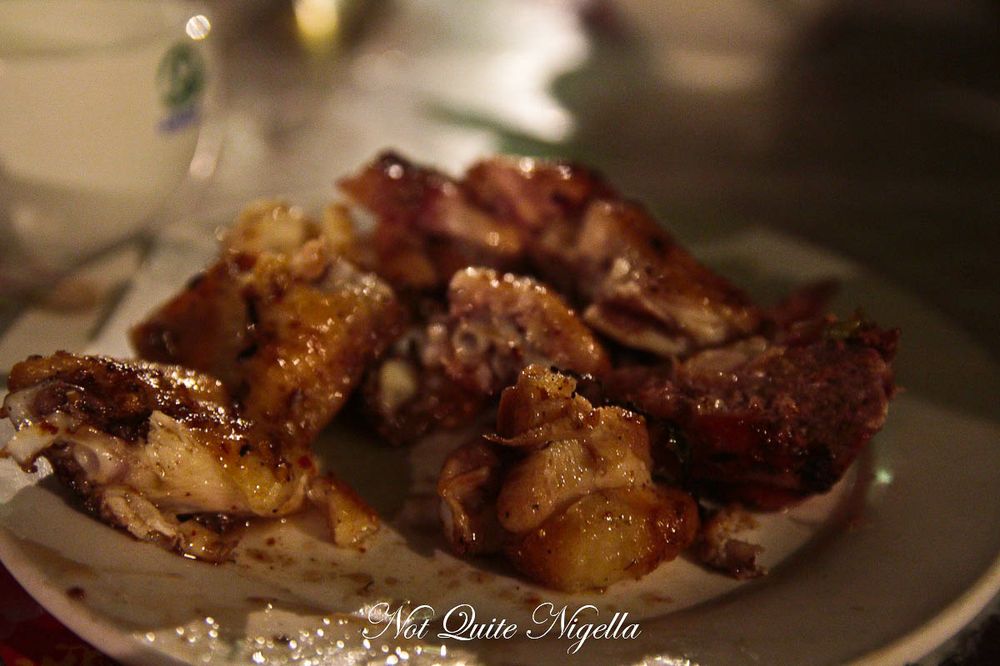 The roasted chicken pieces are served on the bone and they have the additional flavour and moisture from doing so. They're juicy and I nab a wing piece which is my favourite. 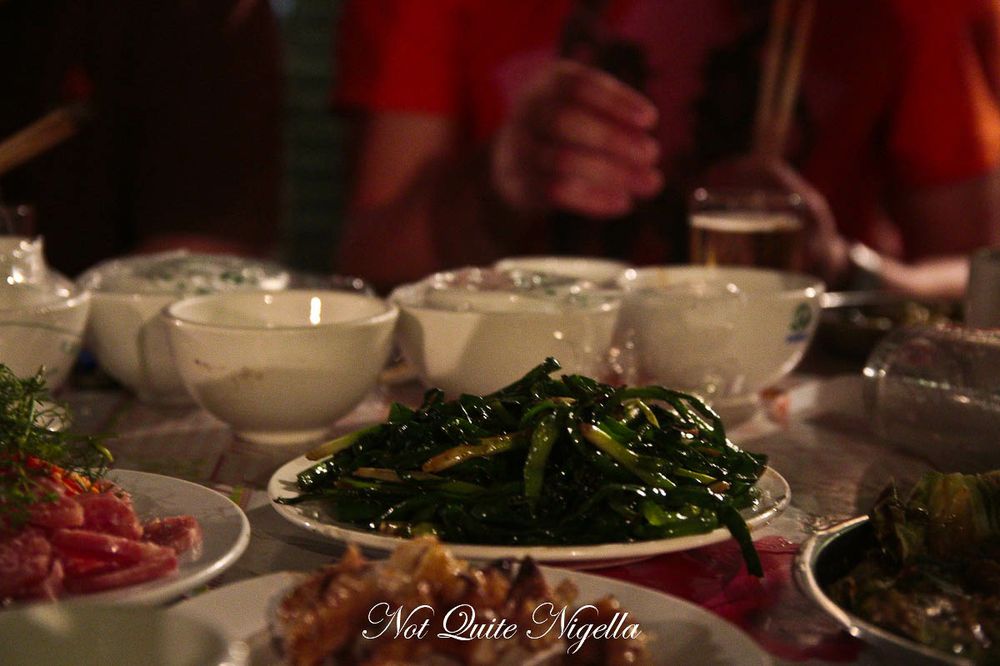 The fried small leeks have a delicate leek flavour to them and are soft and delicious. 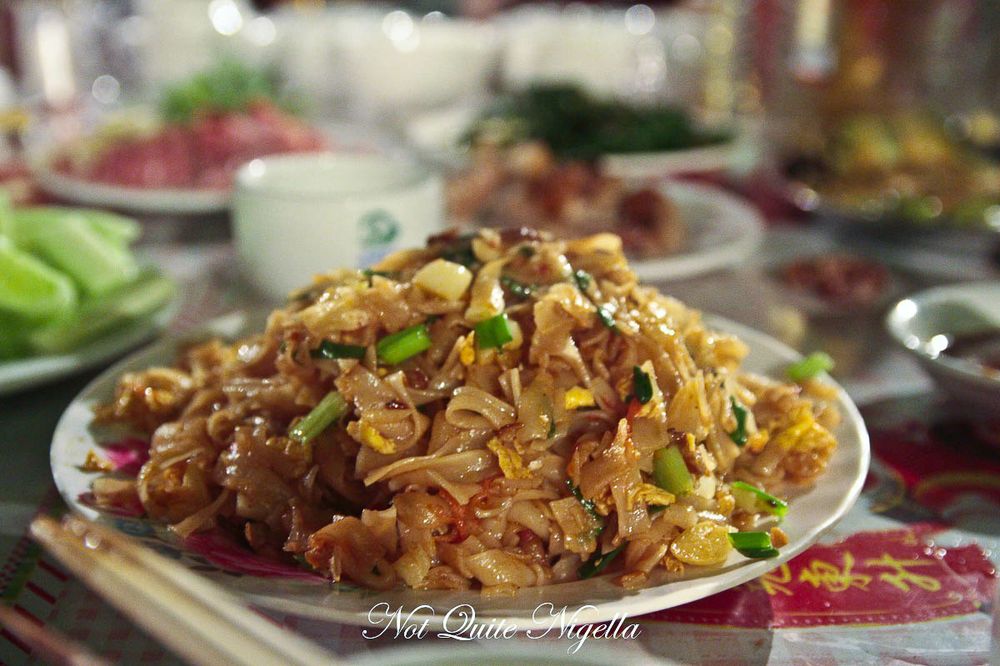 The rice noodles aren't bad although they don't have the punch and flavour that the other dishes do and need a bit more seasoning. 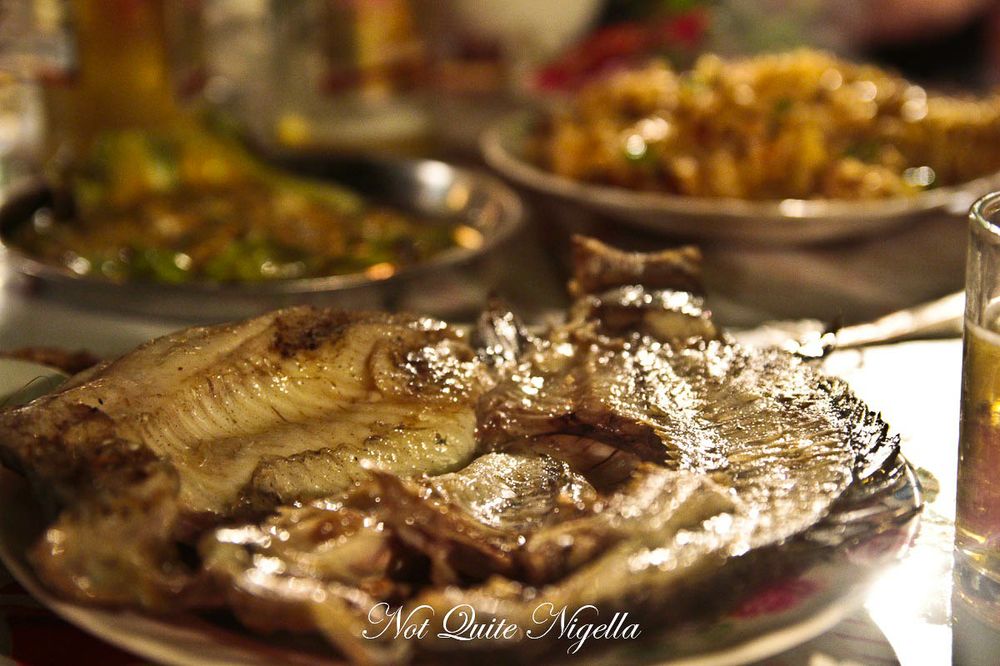 However the grilled fish said to be caught locally is fantastic, the sweet flesh so moist and succulent. We think back to the fishermen we had seen only that morning. 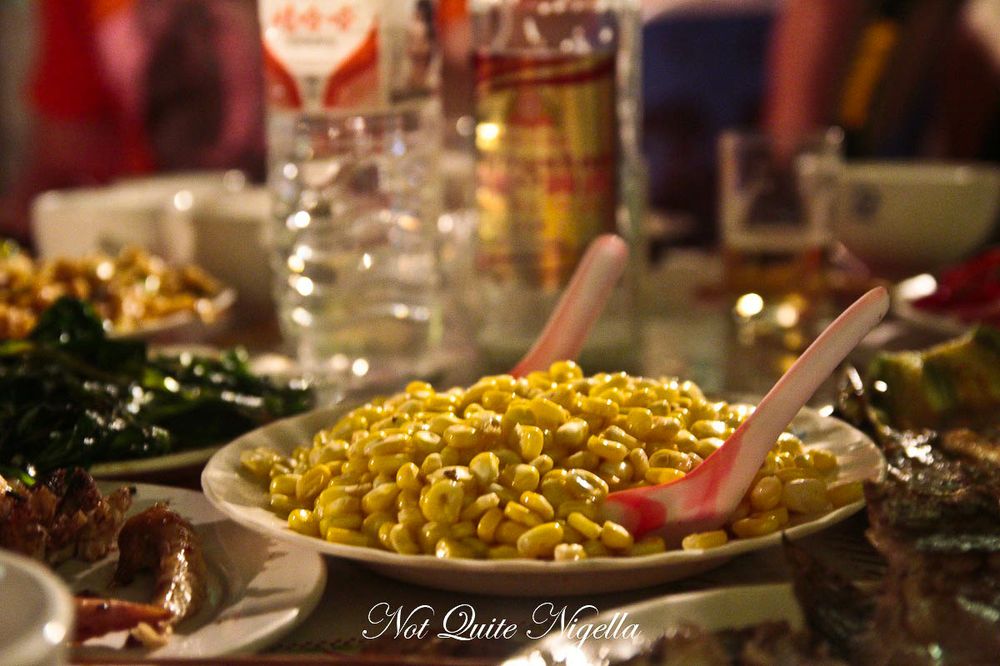 The food isn't quite finished (and yes we already had dinner!) but the grilled sweetcorn is worth a taste. I've found the corn here in China quite sweet but not quite as juicy as the corn that we get in Australia. 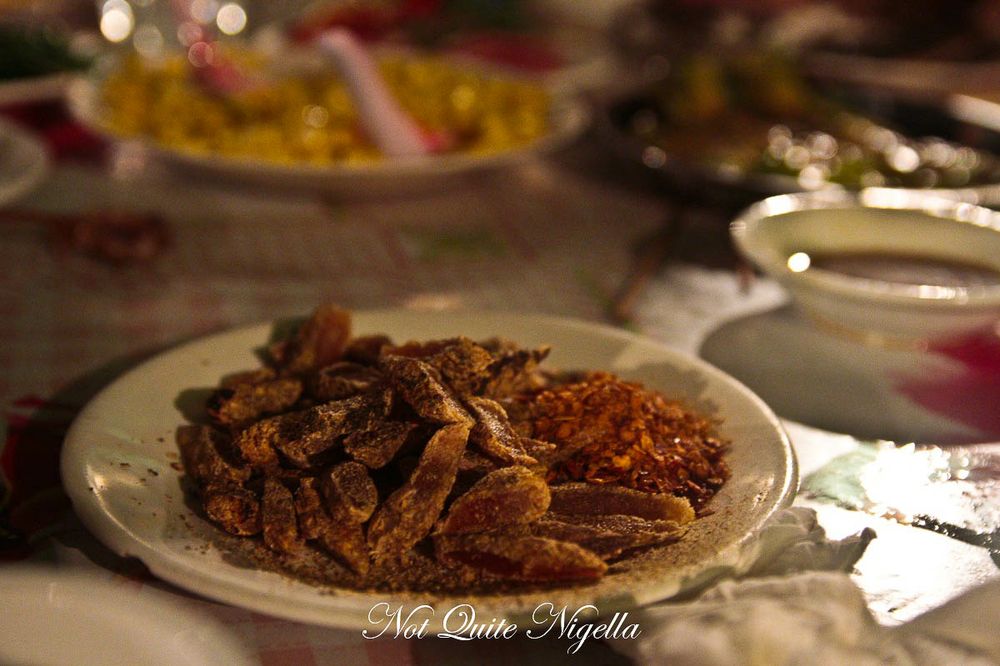 One final mouthful is the dried beef skin which has such an unusual texture. It's semi translucent like a jelly or jube but the texture is very chewy with a pleasant beefy flavour. It's served with a little side of dried chilli flakes. 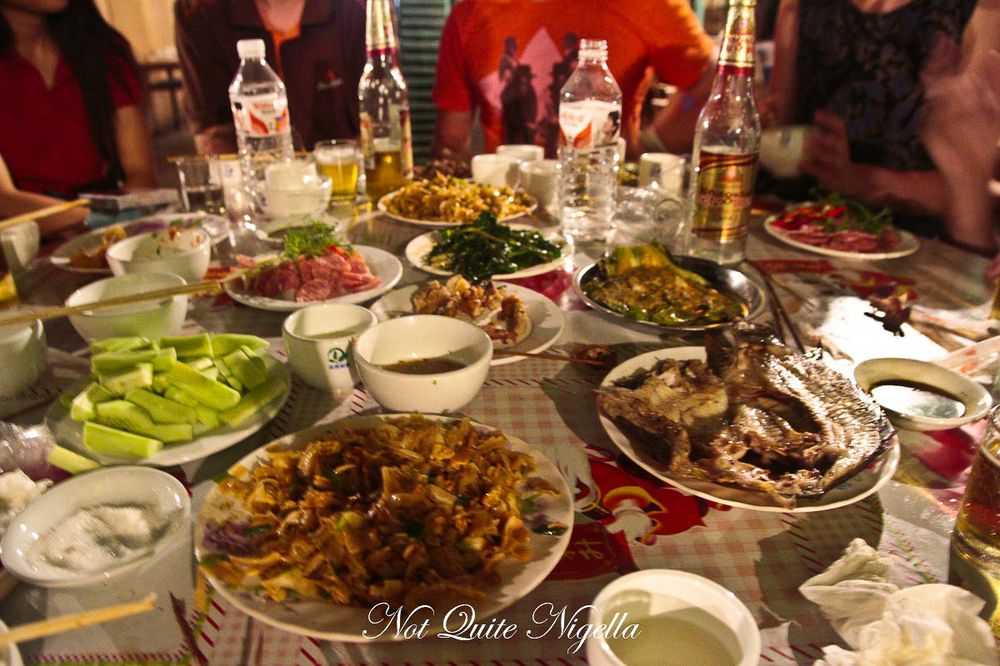 It's almost midnight and the festivities at the next table are just getting started. One young Chinese gentleman offers one of our group a beer and they sit down and chat-one side in Chinese, the other in broken Chinese. The girls giggle and stand up to toast again and we follow suit. When in China...

So tell me Dear Reader, do you ever go out and eat supper after dinner? And what time do you usually eat dinner? 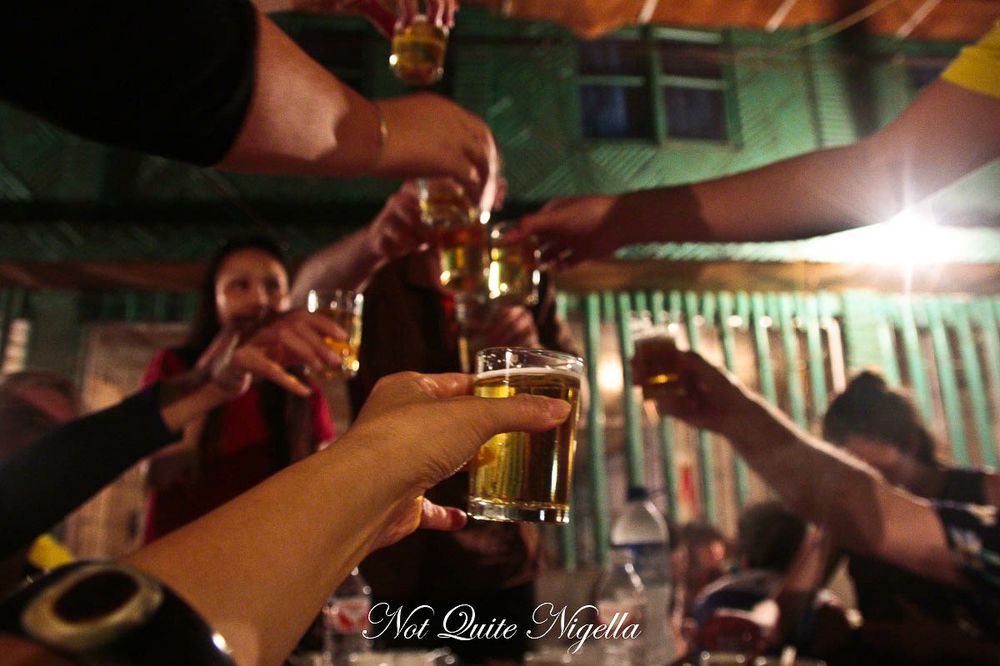