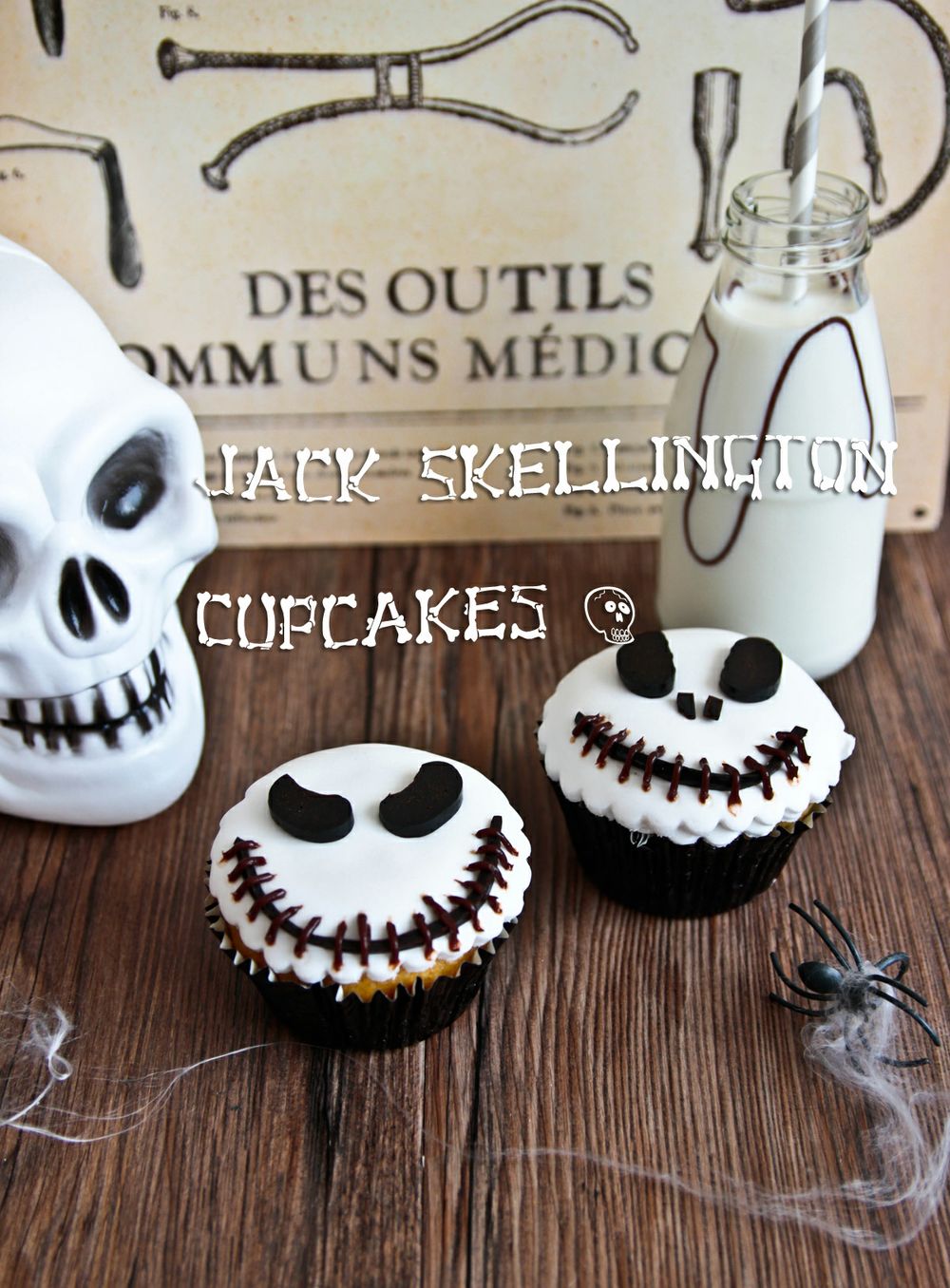 When I was about twelve years old, my sister and I got our ultimate wish. To have a pet that lived outside of a cage (bird) or tank (fish). Our cat however wasn't the kind of cat that you would envisage when you think about cats. We were completely unaware of buying pets from pet shops so we picked the biggest, fluffiest ginger cat we could find and brought it home, much to its protest. Kitty (imaginative huh?) was the grumpiest, meanest cat you could ever think up. He hated being touched and if you looked at him, I'd swear he'd give you a dirty look back. Our arms were blissfully covered with scratches-I say blissful because we were so glad to just have a cat that the scratches were just a small price to pay for having an actual furry pet.

Kitty never responded to his name (although truth be told, we had given him so many names that he was probably completely unaware of what his current name was) and every time we went near him, he snarled at us and his claws came out. Nevertheless we adored our grumpy cat and would watch him constantly completely fascinated by this other creature in our lives. We watched as he slept and wondered what sort of dreams he was having. His paws would move as if he were running.

One thing that I was fascinated by was when he saw something that he wanted to dart over to. He would sit on all fours and you could see his body moving ever so slightly back and forth before he burst like a firecracker from all four limbs towards whatever he was after. It could have been a snack, a piece of foil that we were dangling or anything. It made us giggle seeing him pounce like that. 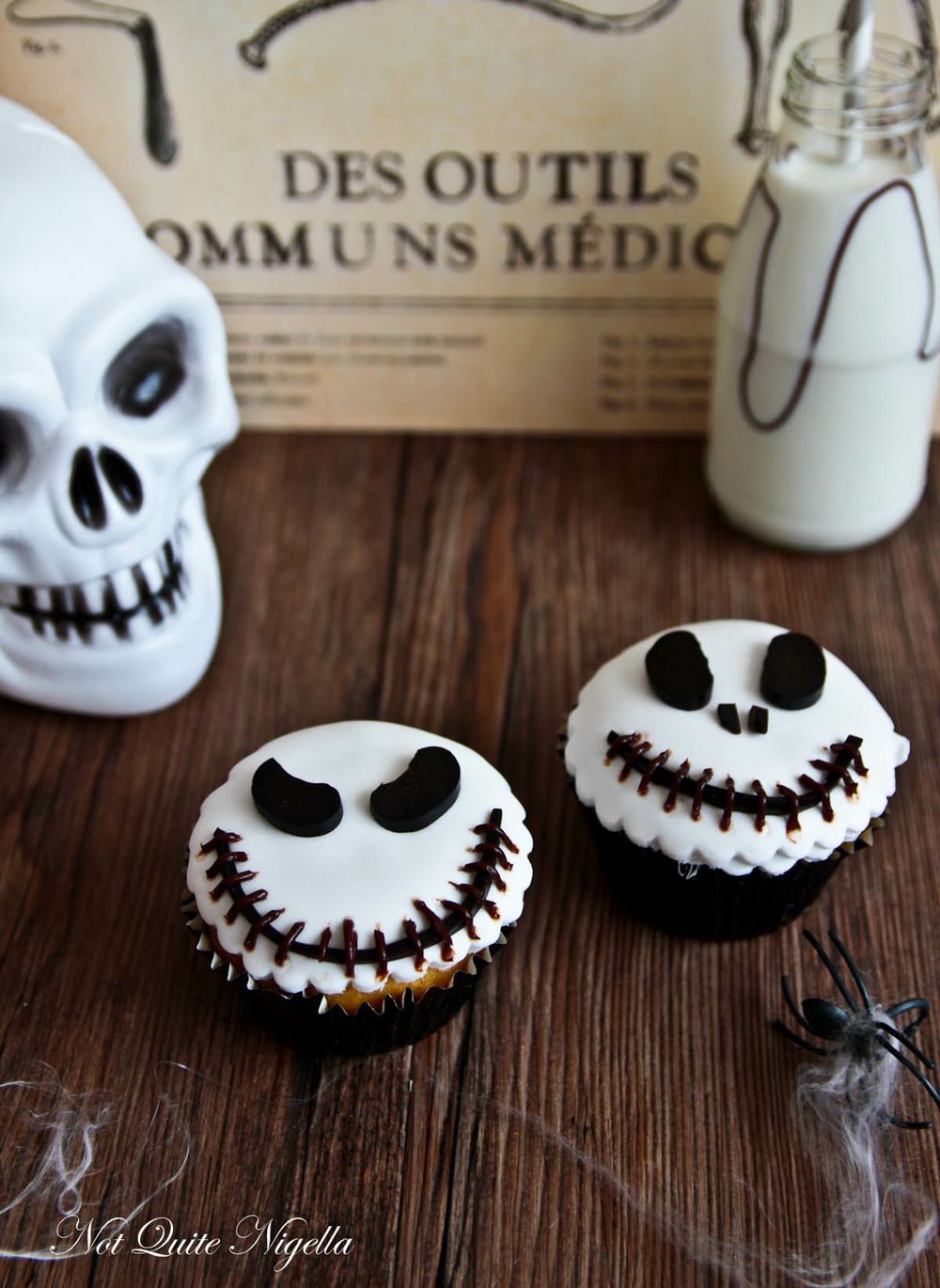 These cupcakes are based on Jack Skellington from The Nightmare Before Christmas, a favourite movie of mine. He is the pumpkin king of Halloween town or the patron saint of Halloween and his distinctly skeleton face is fabulously easy to recreate via food or cupcake. I decided to make the cupcakes pumpkin flavoured to coincide with the fact that he is pumpkin king and the face, well that was a cinch. With a bit of easy knife work on some licorice and some piping we had our Jack Skellington. The cupcakes are moist and go well with the white chocolate ganache-I know that this is an extra step and by all means do like what my friend Florizal did when making these and use a soft pre-made icing if you don't want to bother with making ganache and using fondant. I'm almost positive that these will give you good luck on the distinctly unlucky Friday the 13th-or at least more energy to face it!

So tell me Dear Reader, what was your favourite pet? And is there an animal that you'd love to have as a pet now? 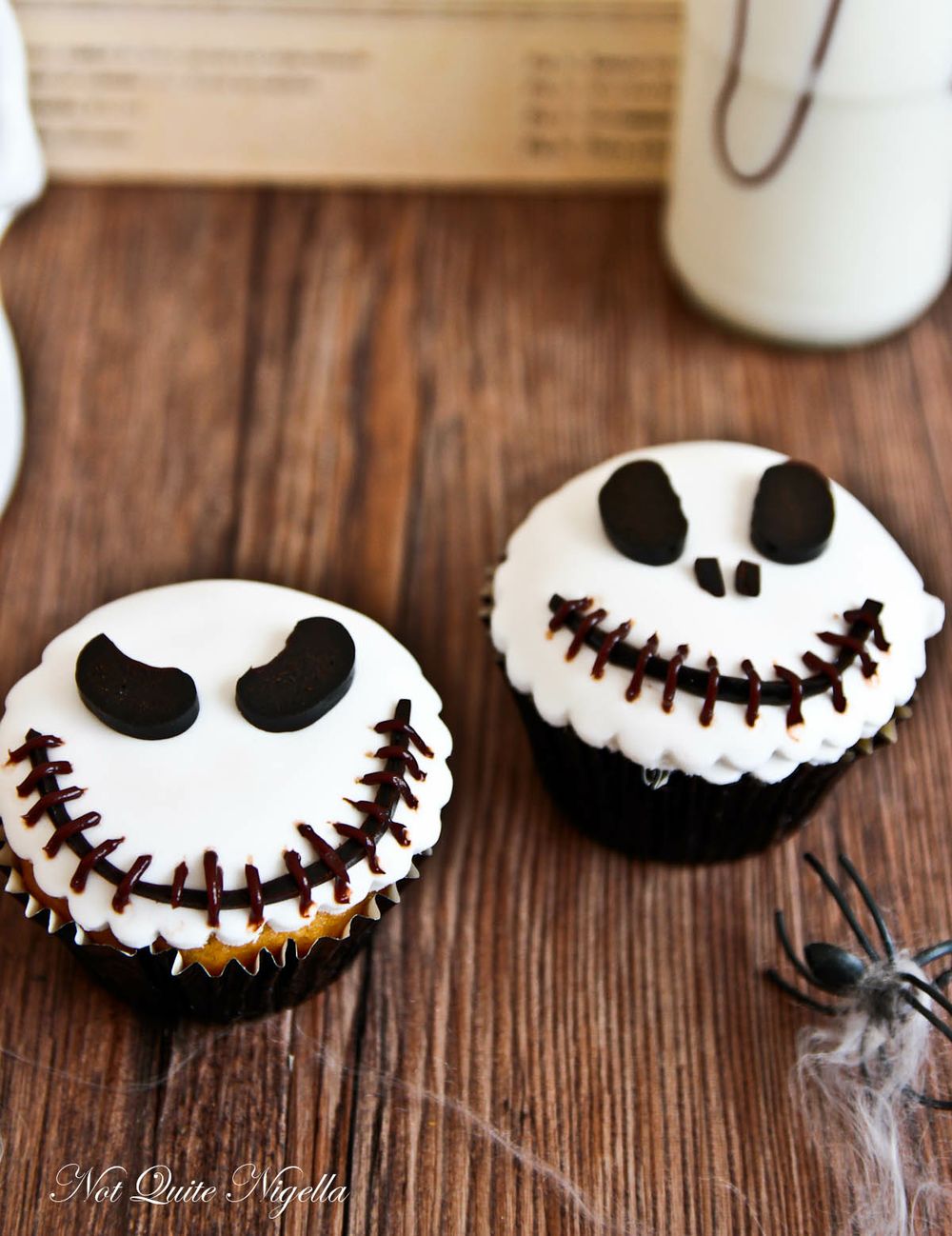 Step 1 - Preheat oven to 180C/350F and line a tray with liners. Mix the two flours, baking powder, sugar, cinnamon, nutmeg and ginger. In a large jug mix the milk, butter, eggs and pumpkin and whisk together. Then add these wet ingredients into the dry ingredients and stir until just combined. Scoop into the prepared liners and bake for 25-30 minutes until a skewer inserted inside comes out clean. Allow to cool.

Step 2 - Make ganache. Combine chocolate and cream in a small heatproof bowl; stir with metal spoon over pan of simmering water until melted and smooth. Cool in fridge for about 30 minutes until it reaches a spreading consistency and spread over cupcakes. Allow to set for about 10 minutes and then using a small palette knife dipped in a cup of cold water, tap the knife a little and then smooth over the ganache. This is to provide a smooth surface on which to place the fondant. 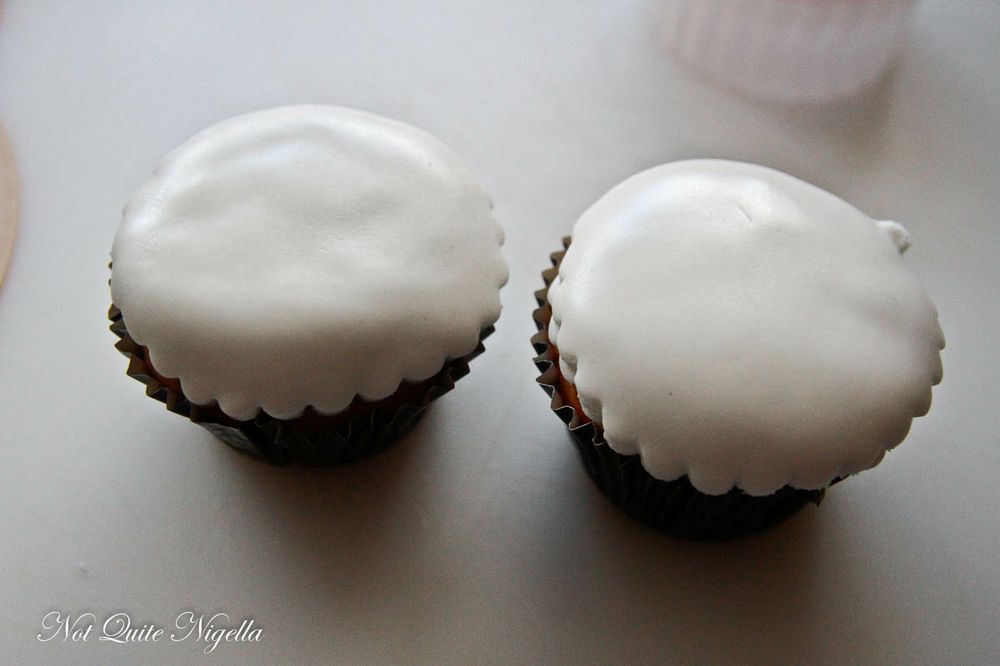 Step 3 - To decorate, roll out the white fondant and cut into circles large enough to cover the entire top of the cupcake to the edge of the paper (to keep the cake part covered and fresh). Adhere the fondant to the ganache using a little water. Smooth it over with a rectangle of overhead plastic sheet. 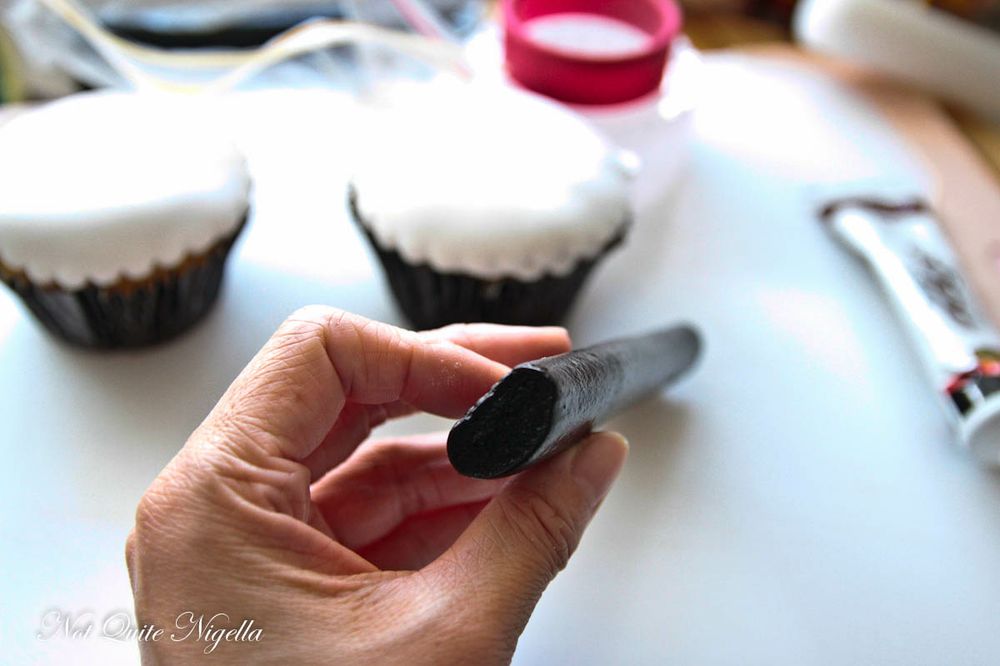 Licorice shape from the side-ideal for Jack's eyes! 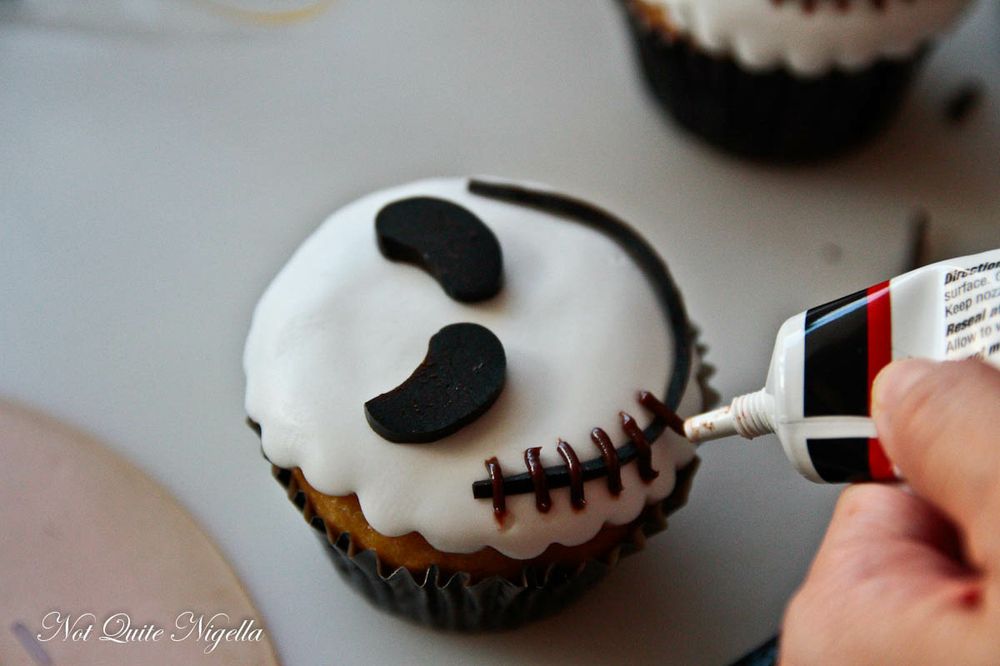 Step 4 - Take a stick of licorice and slice off some pieces for eyes and stick them to the fondant. Jack's eyes can be round or they can have expression to them-using a paring knife just cut out pieces from the licorice. Cut a long thin piece of licorice for the mouth and draw the stitches on with the chocolate icing pen.