Blood Clot and Brain Cupcakes-Happy Friday the 13th for tomorrow! 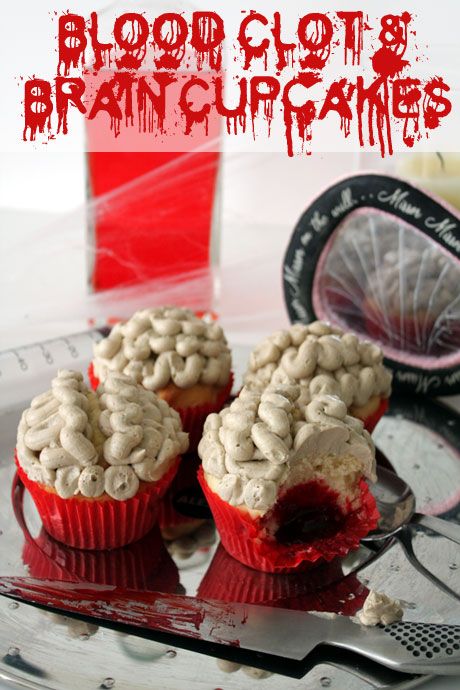 Look away if you're squeamish and if you're not, peer into my dark mind. As you may know, Halloween is my kind of holiday. Sure, I live in the wrong country for this as we don't really celebrate it but give me Friday the 13th as an interim measure between the long year that stretches between Halloweens. I love anything dark and ghoulish so I was excited to be able to have a little bit of Halloween in February. Nothing bad has ever happened to me on Friday the 13th (that is one date where I truly do notice if bad things happen). 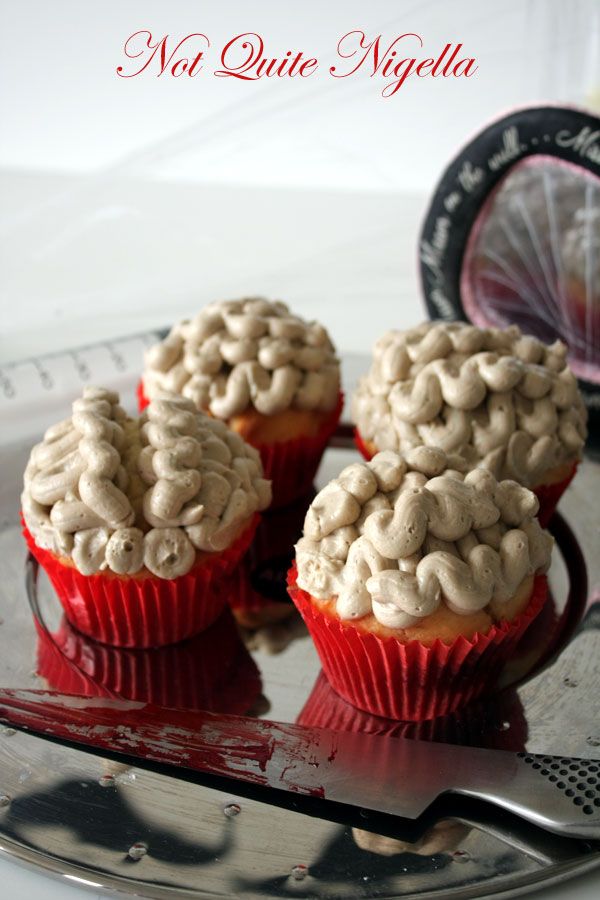 The brain decoration idea came from the very copied and popular cupcakes book Hey There Cupcake! by Claire Crespo. I thought that I'd make it a touch more grotesque with a blood clot hidden inside the cupcake. I needed a fairly stiff batter, one that would hold a clot so to speak so I turned to the Jam Donut cupcakes I made a while back. The cake itself is quite dense and whilst 4 cups of icing sugar sounds like a freakish amount... ok yes it is and there's no other way to pitch it. 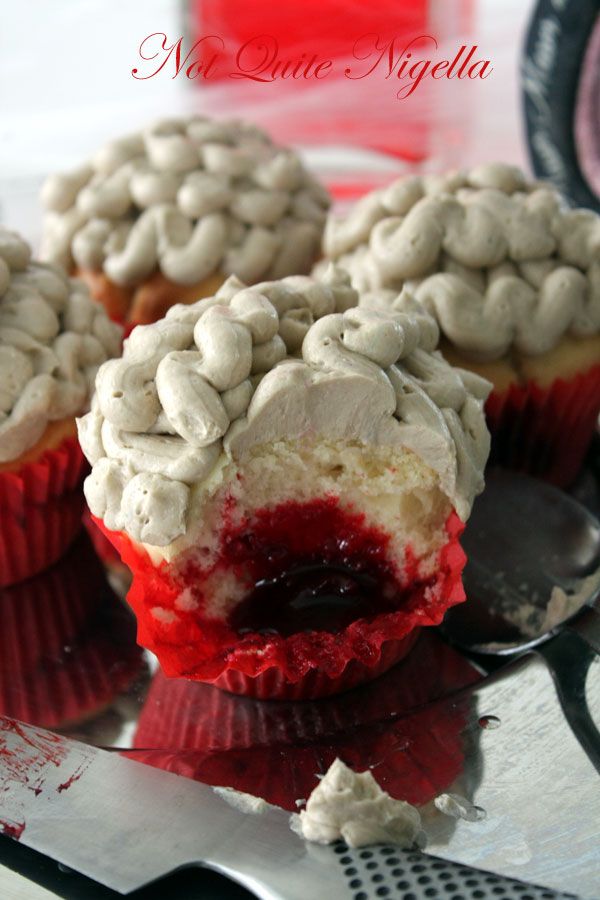 As with all things Halloween related, I took out my box of tricks and decided to ghoulify an already ghoulish cupcake idea. I would have loved to have some surgeon's implements for the task but unfortunately my doctor friend Soph lives in another state and I'm sure the local hospital wouldn't understand my need to borrow brain surgery tools overnight. Of course I could have paid them in one of these cupcakes. I hope that my broken mirror and bloodied knife suffices. 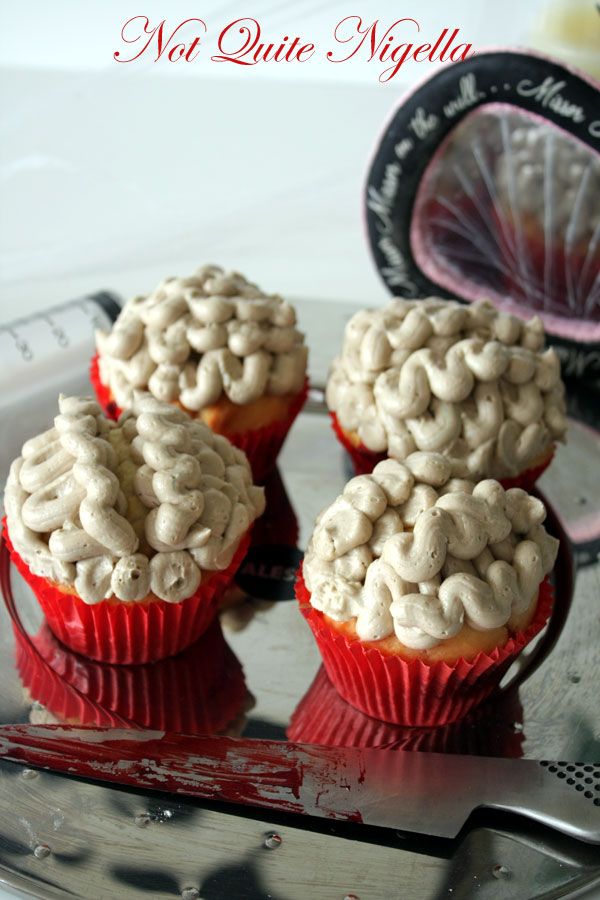 Step 2 - Sift the flour into a medium bowl, then add a pinch of salt and the caster sugar. In a jug, combine the vegetable oil, egg, buttermilk and vanilla extract. Add to the dry mixture and stir to only just combine. It will be thick and puffy. Place 1/2 tablespoonful of the mixture in each muffin hole and make an indent in the centre. Fill each indent with a heaped tablespoon of the strawberry jam.

Step 3 - Cover the jam with the remaining cupcake batter. Bake for 20 minutes or until a skewer inserted comes out clean. Remove from the oven and set aside to cool slightly.

Beat butter in a small bowl with electric mixer until light and fluffy, beat in sifted icing sugar and milk in two batches until fluffy. Add in a couple of drops of red and brown or black food colouring until a grey pink shade is reached. My black powder has a very green tinge so I used red and brown and a small amount of black at the end. Gels are better as you don't need very much and I find that it's easier to accidentally use more liquid colour. 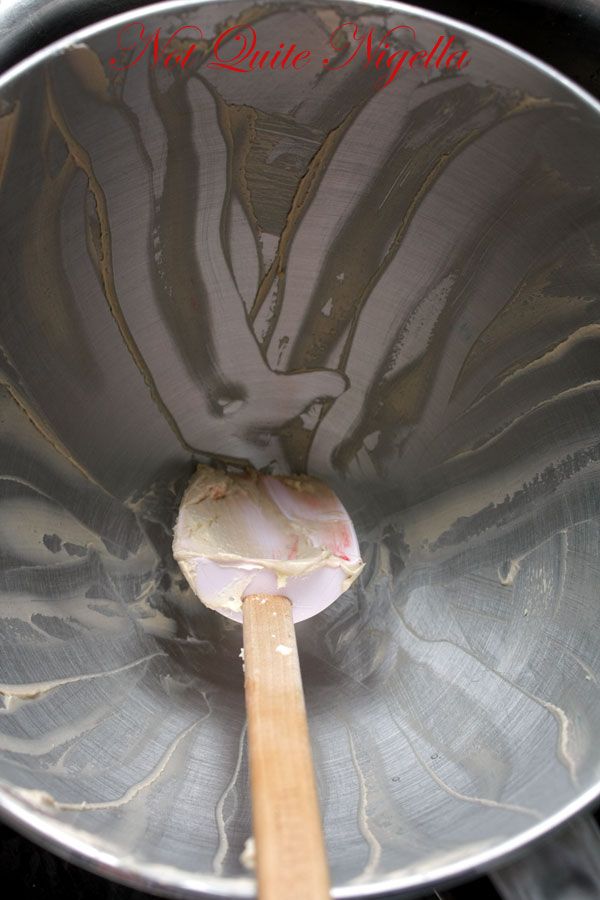 Step 2 - Visually divide the cupcake in two to represent each hemisphere of the brain and pipe squiggly lines on top. You can't really go wrong as the brain matter squiggles go in all sorts of directions. Fill in any gaps with a dot of buttercream. 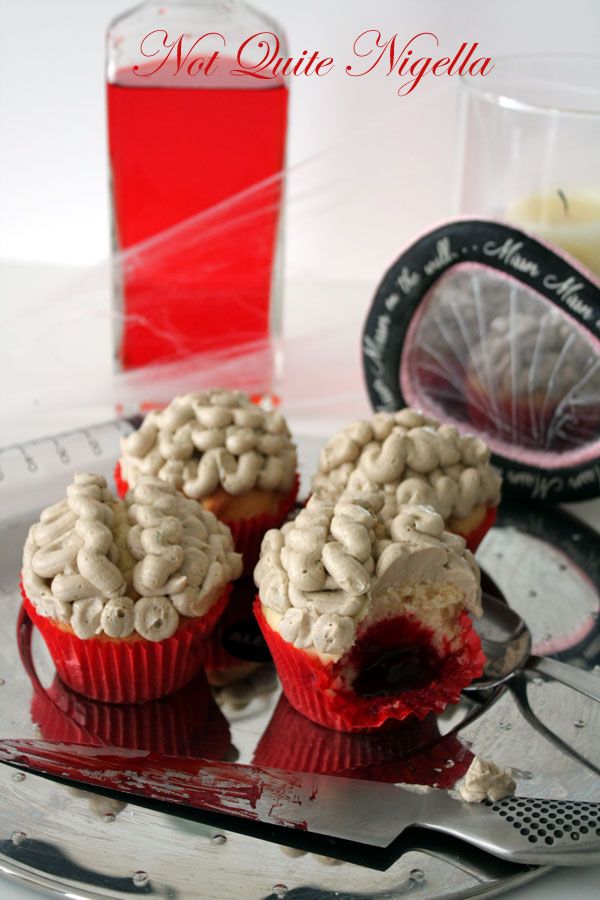