Lentil As Anything, Sydney 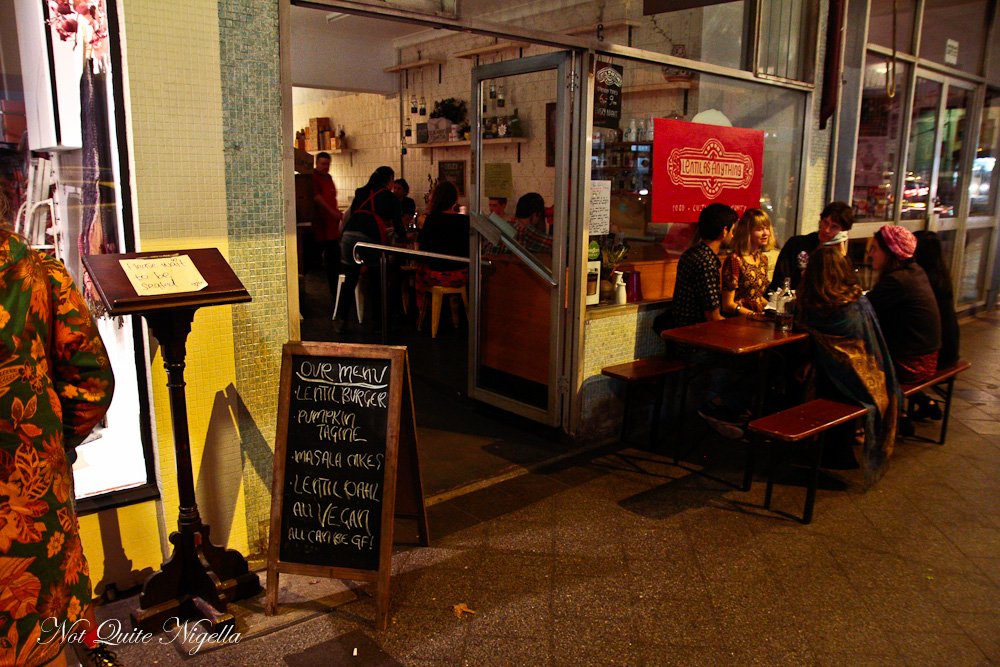 There were whispers all over the internet for a few weeks as though a celebrity were gracing the shores of Sydney. "Lentil is coming!!" people said excitedly, referring to the Melbourne based chain of four restaurants Lentil as Anything as a one word moniker - like Cher or Madonna. And three weeks ago, it opened in Newtown to an instant, enthusiastic customer base. 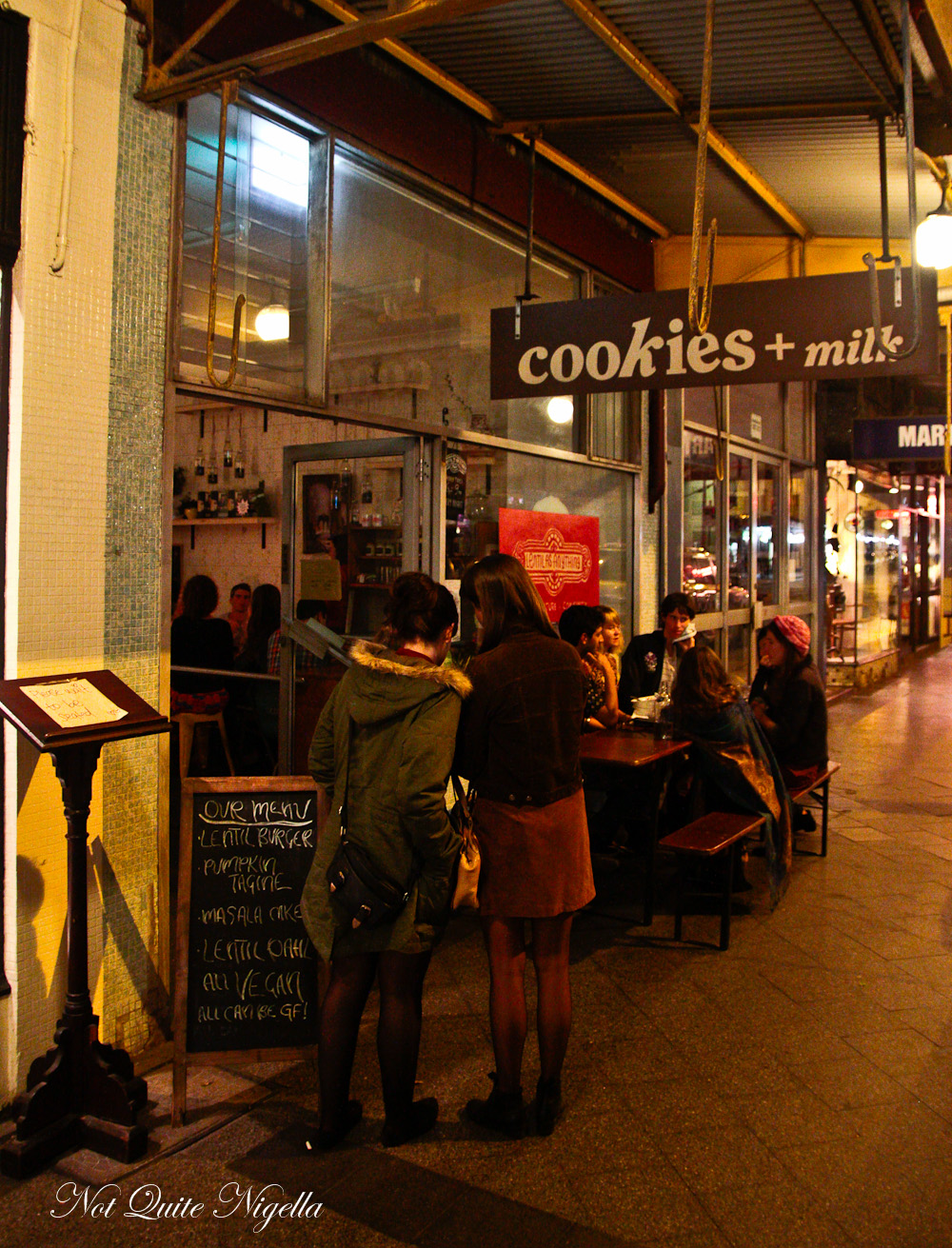 Lentil as Anything is more than a restaurant or eatery. It is a community and social enterprise. The concept of Lentil is that diners share communal tables, partake of vegetarian or vegan food and pay whatever they like. Any profit is distributed among charities and the needy. The restaurants also serve as training ground for people on the "Work for the Dole" scheme, the long term unemployed, refugees or anyone seeking hospitality training. 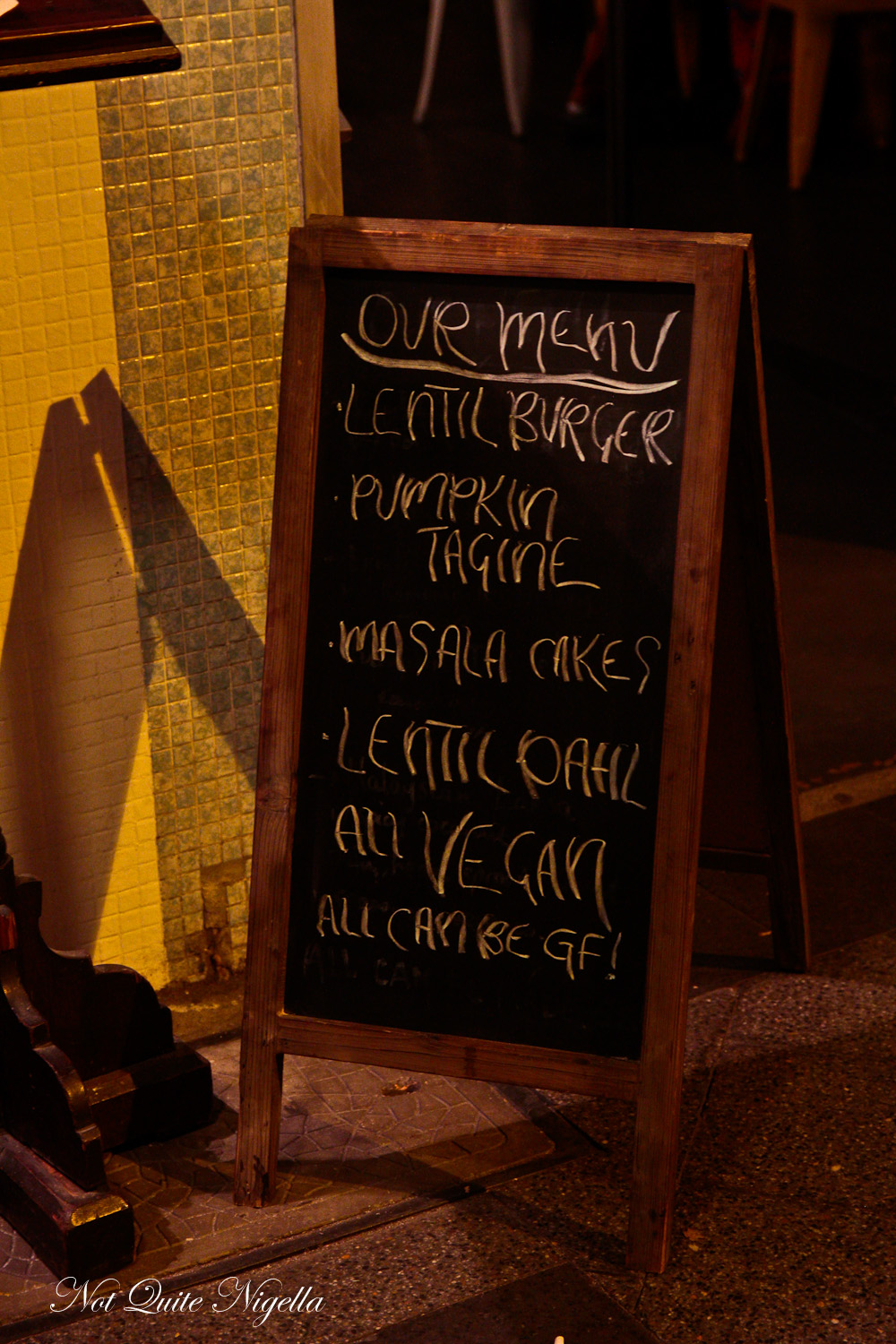 The Sydney branch like all branches is mainly run by volunteers. Here there are three paid workers: the head chef, sous chef and floor manager. They have over 70 volunteers on the books but always need more (every evening at least 1 or 2 people ask to be put on the list). Customers also donate produce and Lentil also work with Food Bank and are in discussions with Oz Harvest. 20-40% of food is subsidised or donated. The rest is from Flemington markets or shops. Sydney is the only vegan Lentil As Anything while the ones in Melbourne are vegetarian.

Lentil as Anything has set up shop temporarily at the Cookies and Milk bakery and store on King Street in south Newtown. By day it is Cookies and Milk and by night after 6pm 7 days a week it transforms into Lentil as Anything. The reason for the temporary location was to establish whether there was a demand for something such as this and within the first week it was clear. They are in the process of acquiring new premises. 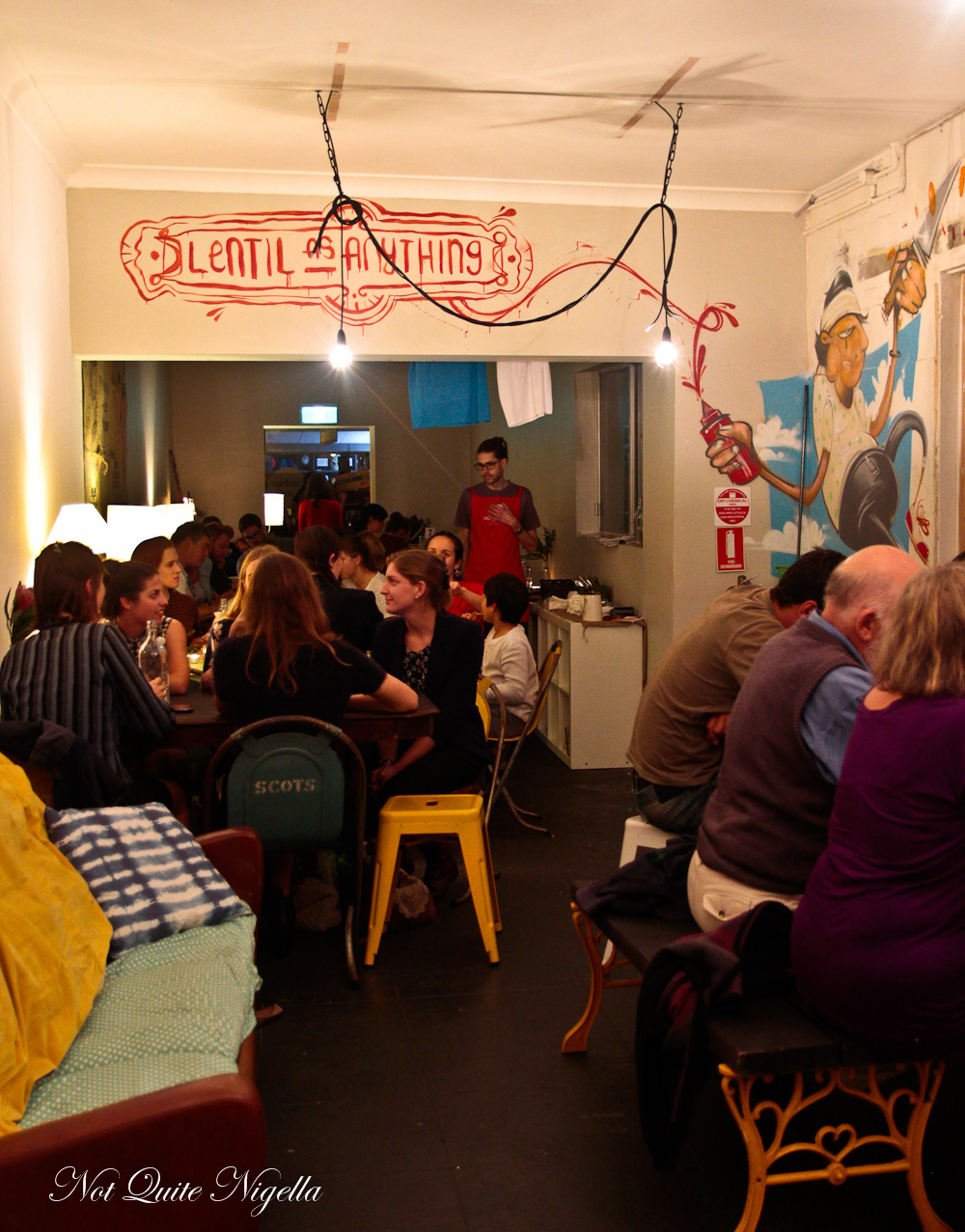 Matt Pettit is one of the volunteers who also serves on the floor and oversees the floor staff. "We specifically chose Newtown because of the social conscience of the community. Also there is a eclectic mix from rich people with no kids to families to students and those from lower socio economic backgrounds as well. It was a microcosm of what we were."

Sydney started as a group of Sydney siders who decided that they wanted to have a Lentil in Sydney. They travelled to Melbourne and to talk to Australian of the Year award recipient Shanaka Fernando, the founder of Lentil As Anything. Melbourne gave it its full support. They are now trying to create a guideline for how to open up a Lentil anywhere as they receive queries from all over the world. 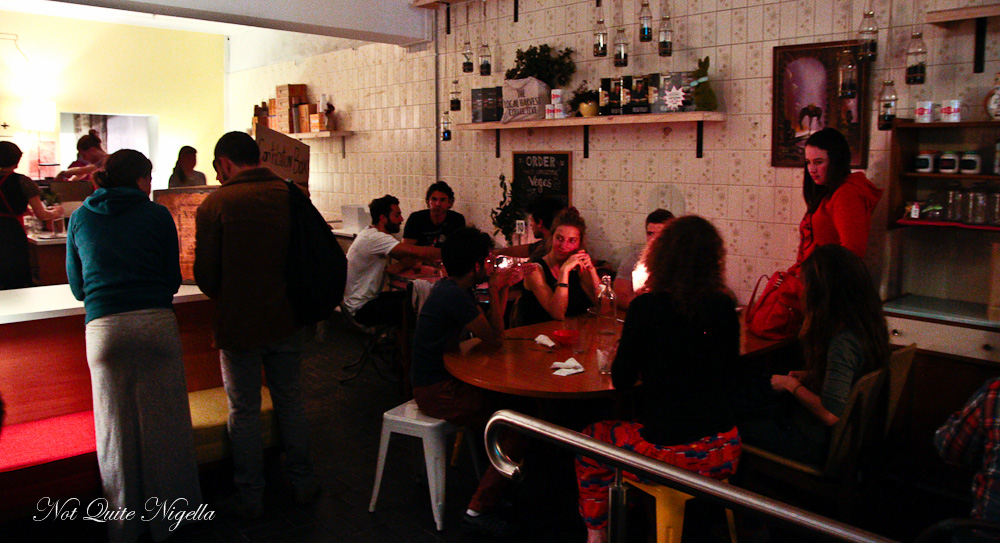 The tables and chairs are a mixture of vintage ones and come 5:45pm there is already a queue - it's this way every night. Ever since they opened 16 days ago the Sydney branch has run at a profit - there was one quiet Monday night but the demand and affection for Lentil is clear. It's their policy to avoid discussing specifics of donations in case it puts a figure in the mind of diners - it's up to them to place money in the large wooden collection box at the front but the total numbers so far indicate that Sydney customers donate more than Melbourne's. 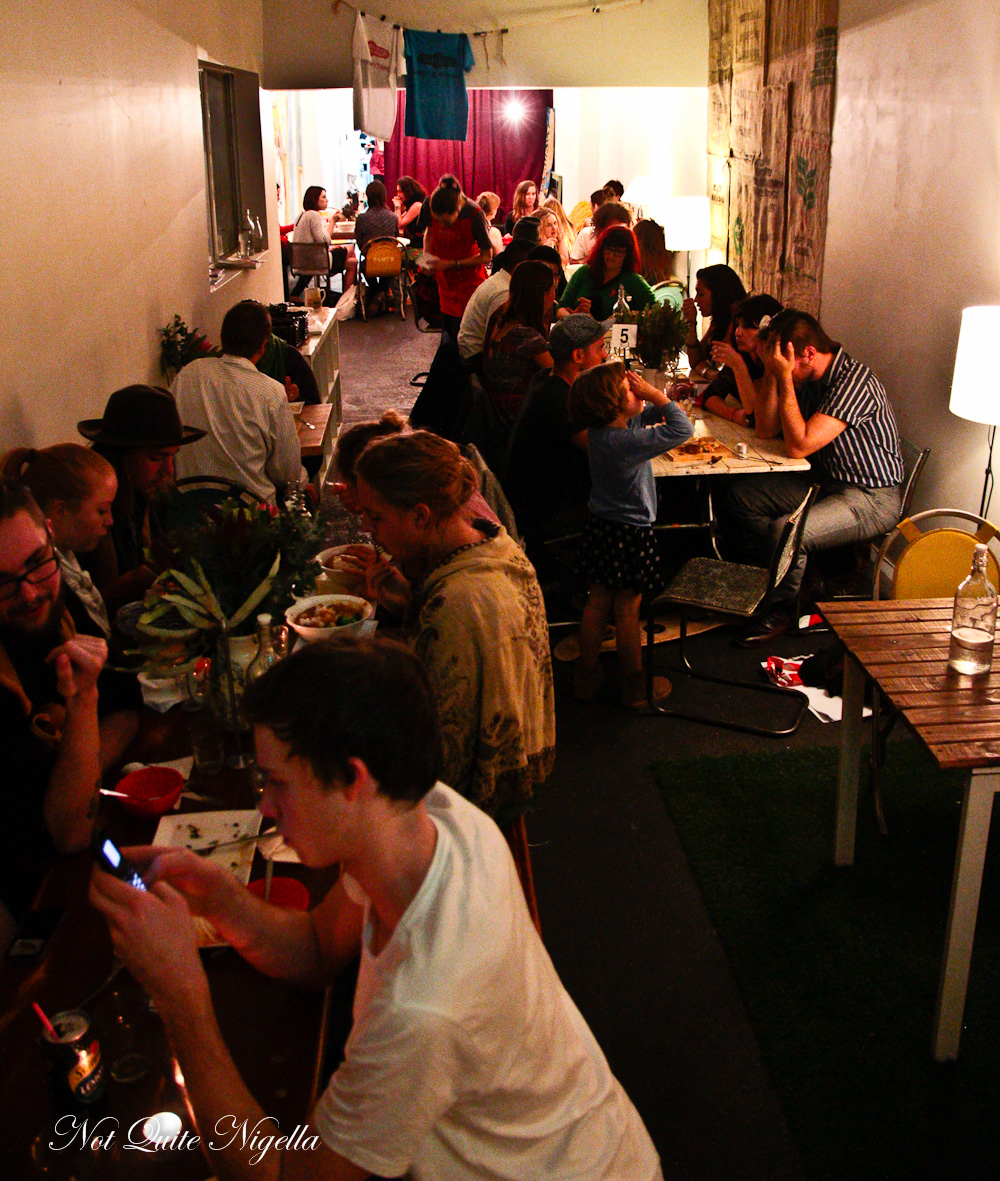 The Sydney restaurant is an a la carte restaurant which is different from the buffet style of the Abbotsford convent Lentil as Anything at The Convent. The a la carte restaurants in Melbourne are smaller. Currently there are 74 seats and on average 200 people come at night. Monday and Saturday nights are quietest while a Wednesday night holds the current record of 231 people. People bring in other people who then continue the introduction. People are considerate of the queues and eat and go on busy nights and at times they can turn the tables three times in one evening in the three hour window. 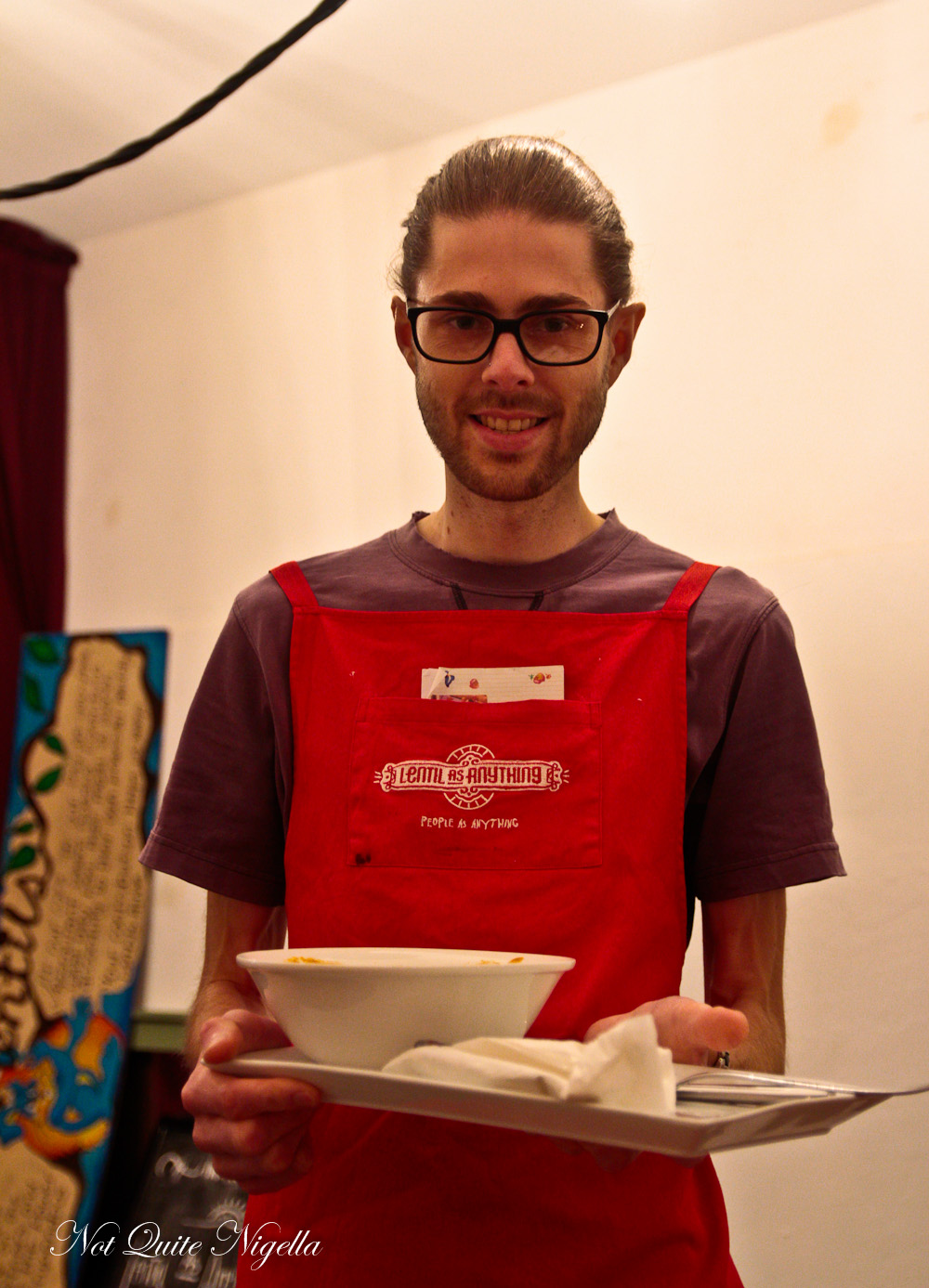 "It's a magical environment," Mark Jones, a volunteer says. He works here three to four days a week. Working the floor has helped increase his confidence. "I didn't have experience because I've been so ill," he explains. He battles eating disorders and working with food in such a positive atmosphere has helped him. "The people, the customers, the volunteers, the paid staff, it's unreal the people that come in. Of a break I'll sit down if I've spoken to them or taken their orders and ask if it's okay to sit with them and they'll say 'Please do'. He loves sharing stories and chatting to people from all walks of life. He has only been challenged by one customer but that is an isolated incident. 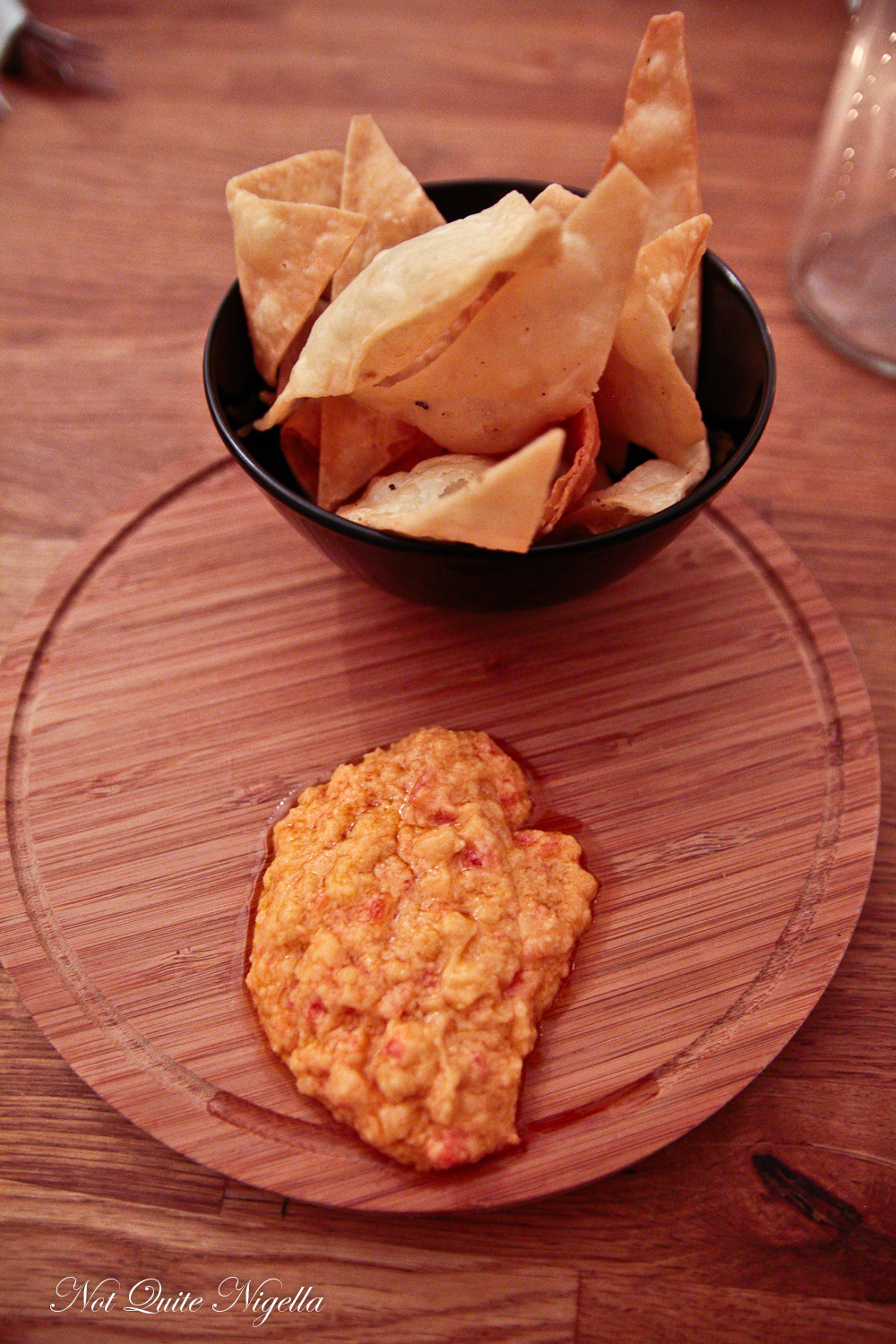 Having arrived before 6pm we take a seat. I'm dining with Mr NQN, Belinda, Tuulikki (Mr NQN's mother) and Ken her new boyfriend. I grill Ken about his background while munching on crispy deep fried chips scooped up with creamy capsicum hummus. This is given out to all tables. 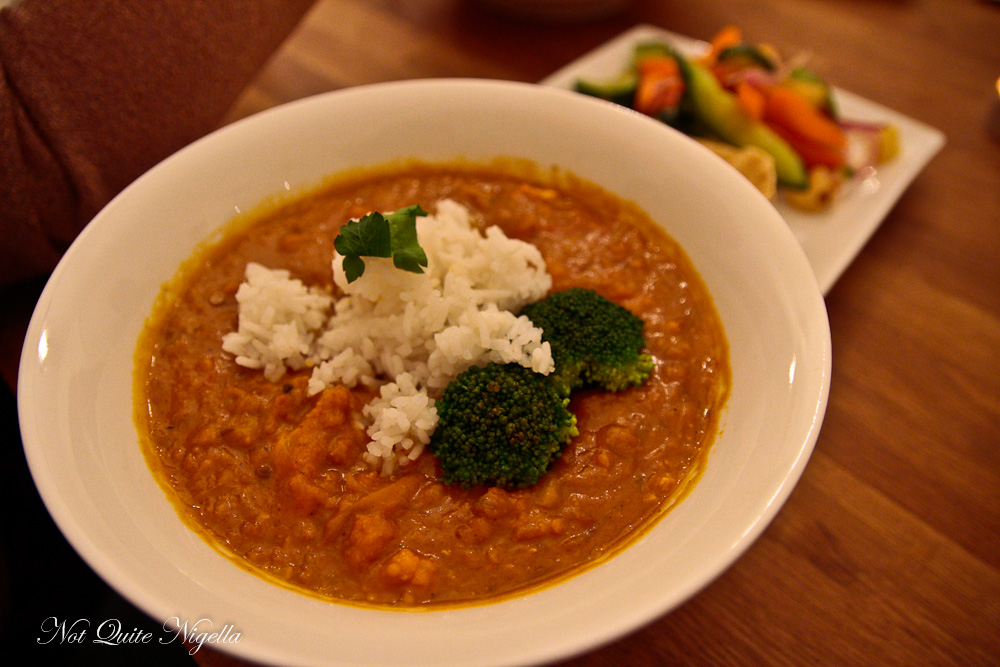 The menu changes regularly and the lentil dahl is thick, spicy and flavoursome with a real heat to it. It comes with pappadums and a fresh carrot, cucumber, red onion and pineapple salad on the side. This is our pick of the mains. 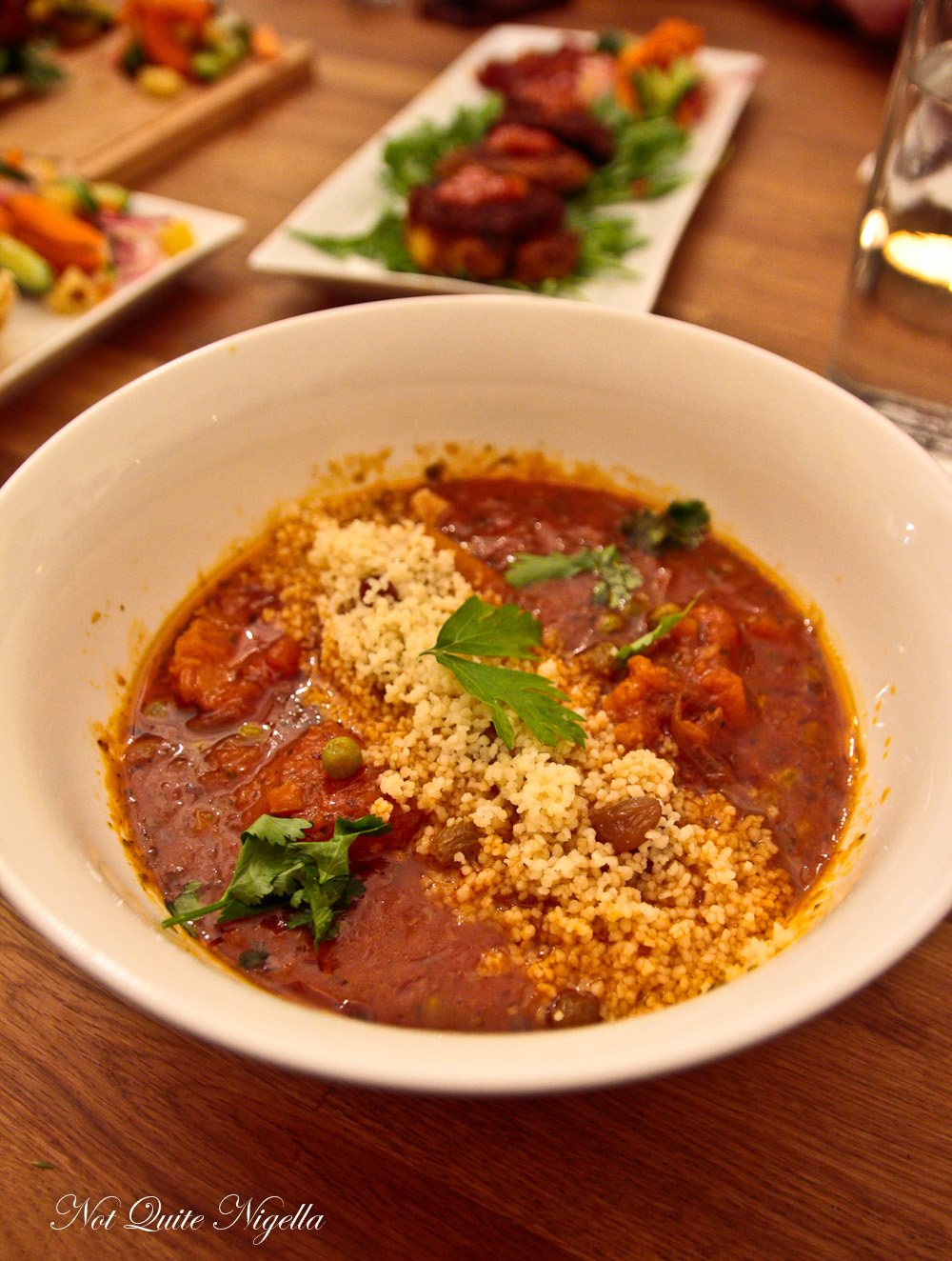 The pumpkin tagine is served in a bowl on a bed of couscous. It's not quite as full flavoured as the lentil but it's Ken's favourite. 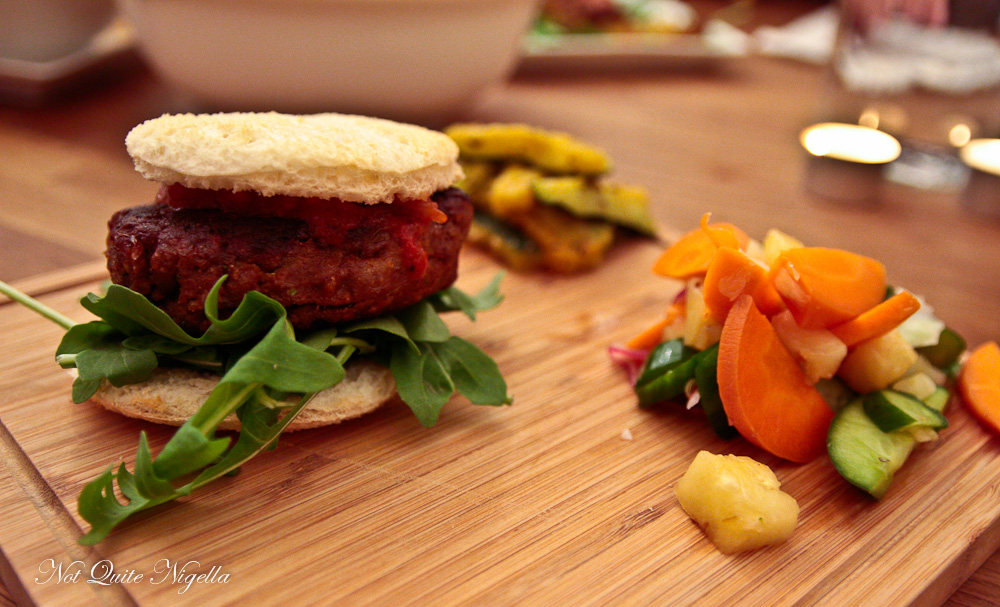 Curiously the lentil burger comes on cut out slices of bread. It's a thick patty on a bun served with a side order of zucchini fries and more of that salad. 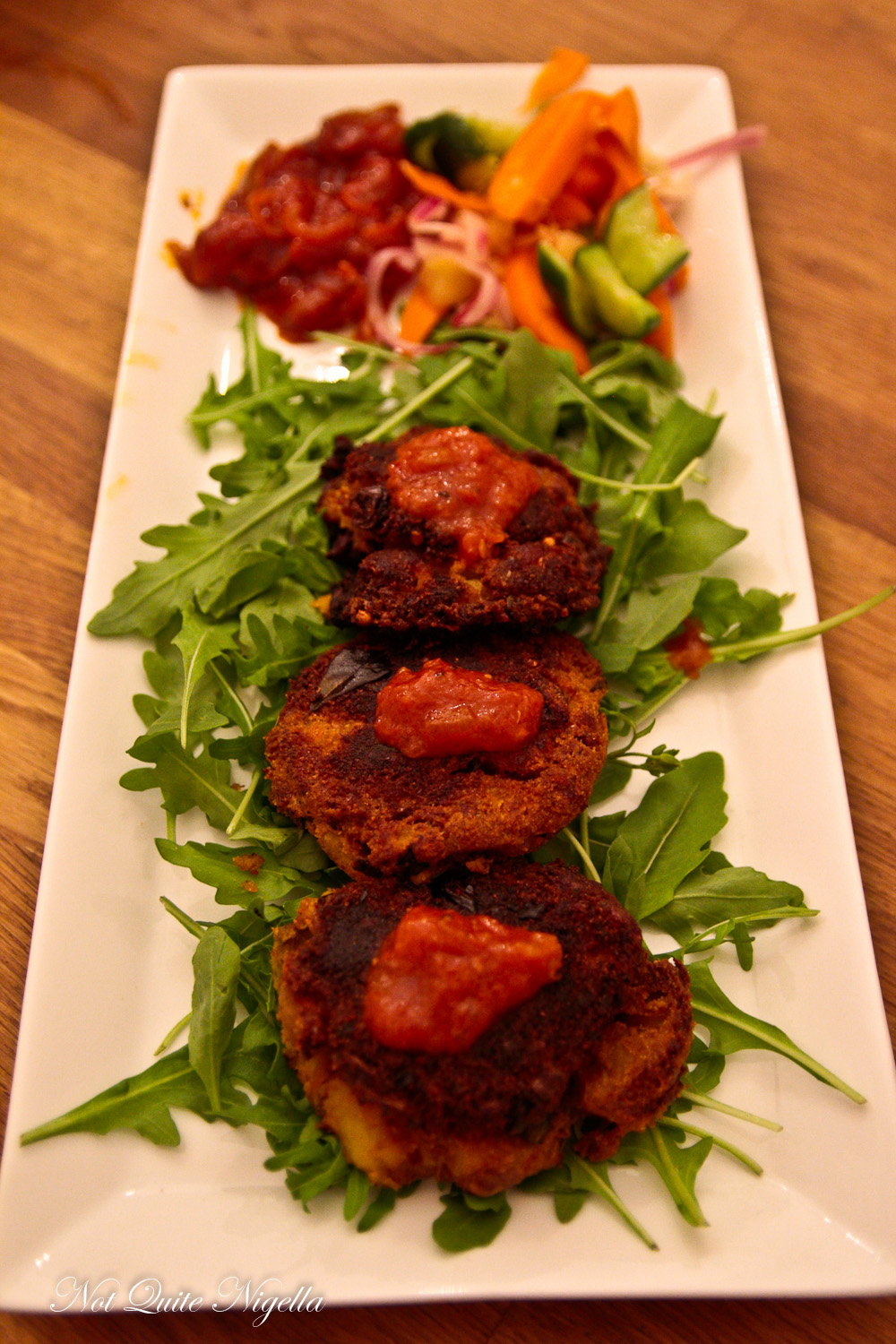 The potato masala patties or vegetable patties come with a generous amount of tomato relish. Matt tells us that a woman dropped by kilos of tomatoes that needed to be used within a couple of days. Rather than have them go to waste they made a huge batch of tasty relish. 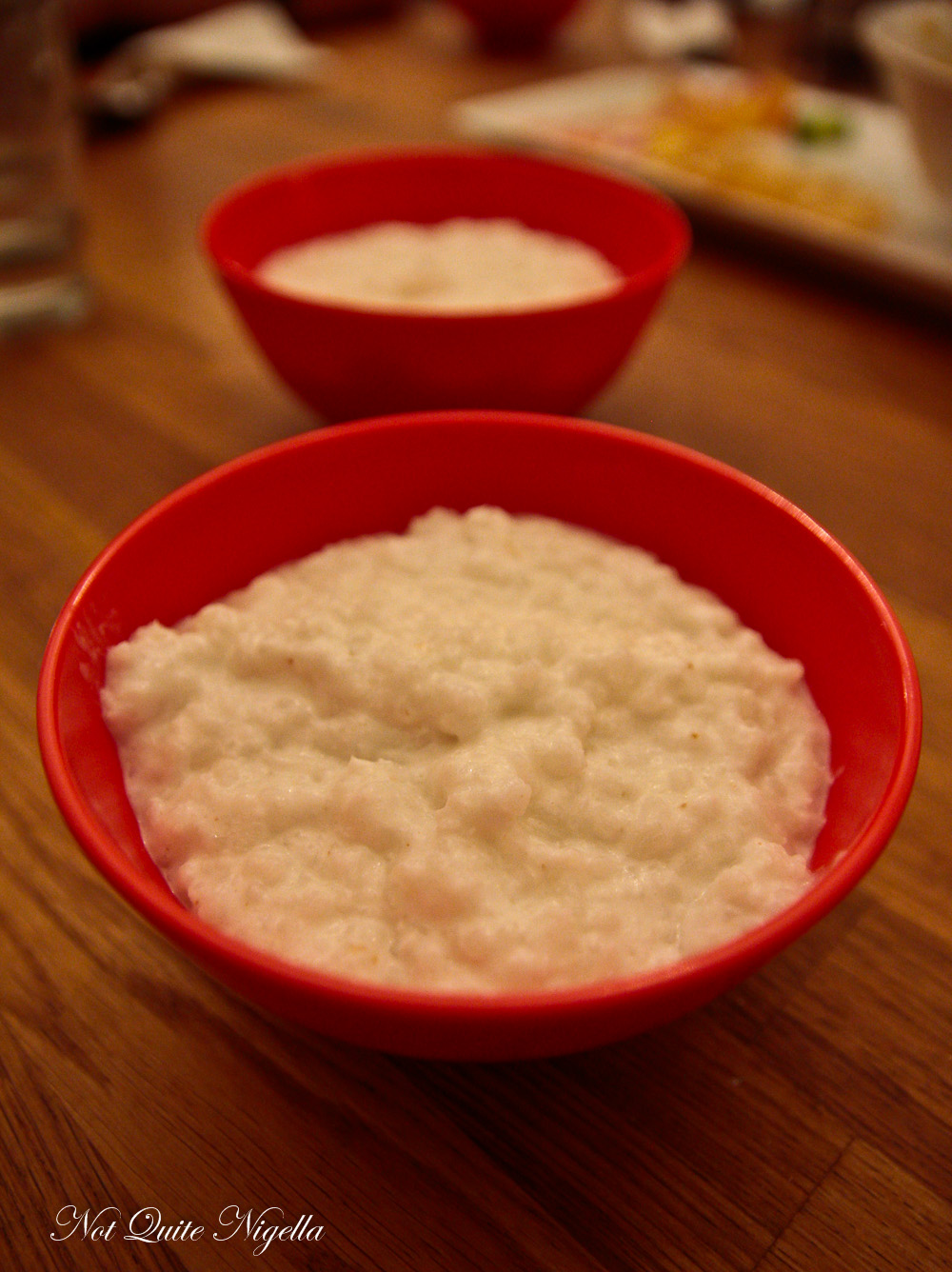 Mark comes over to us to let us know that dessert is coconut rice pudding. We order three bowls and it's a creamy thanks to the coconut milk and there's also added texture from desiccated coconut in the mix. It's not an overly sweet rice pudding either. The food here is perhaps not the focus but it's the experience and atmosphere that contributes so much.

It is time for us to pay and there's a queue outside. We slip our money into the wooden collection box. "There's no pressure for anyone to pay a certain amount. People pay what they can afford. People come in with a $50 note and ask for change and we say don't worry, pay another time. We're all about community, generosity of spirit and trusting people and giving someone the benefit of the doubt. It's about trusting people and trusting people's good nature. There are not enough people in the world doing that today. People think about themselves first but we're about thinking about the community."