Easy Do It Yourself Crispy Baked Root Vegetable Chips! 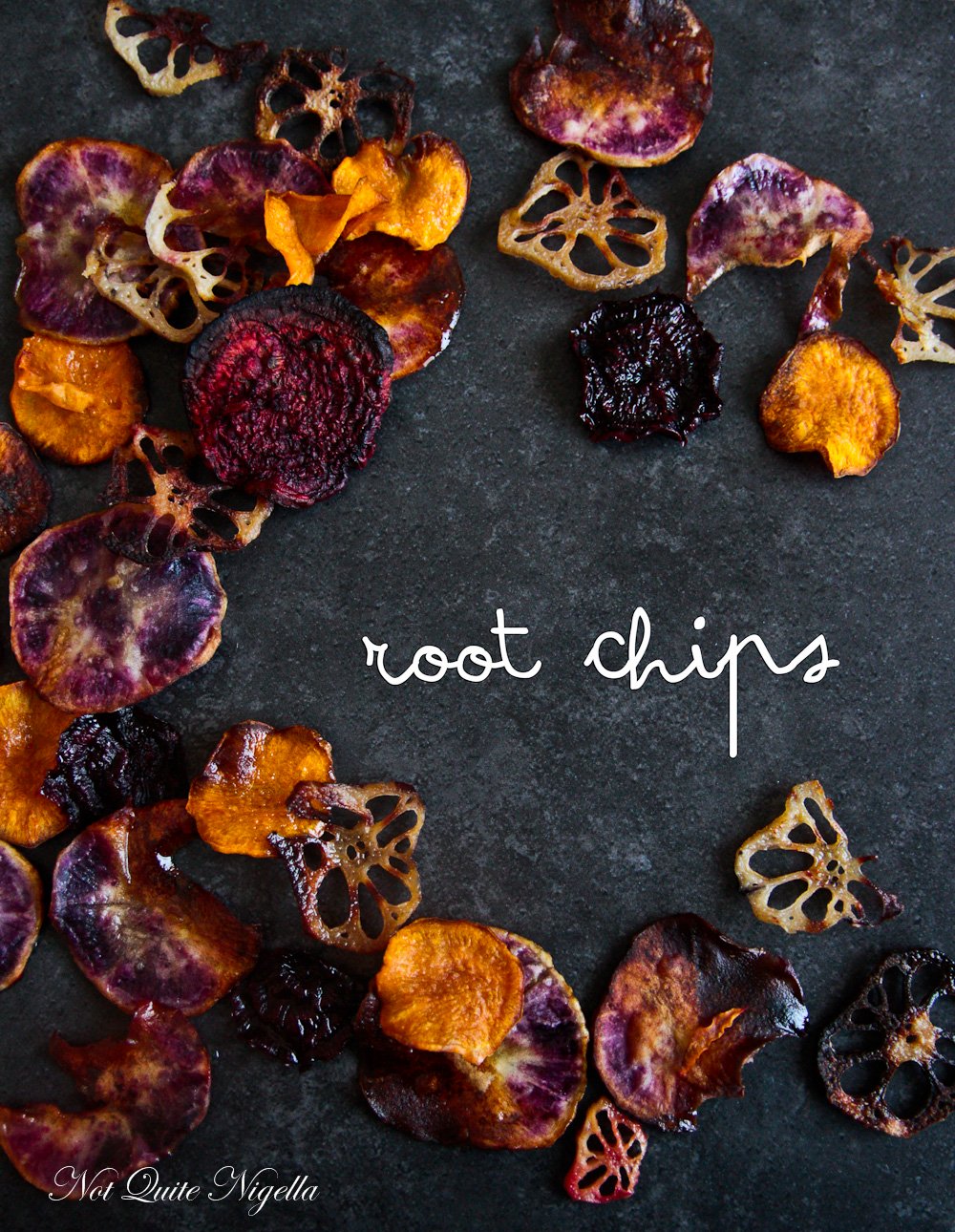 Just a little housekeeping today! This morning at 10:30am I'm going to be on Radio 2GB with the lovely Anna Lisle on her program called Fresh!

Back to scheduled programming...

I know, I couldn't get much longer a title could I? ;)

As much as the world has been taken over by sporting events recently, I am a sports novice and happily so. But there is one thing that I will delight in doing and that is calorie dodging. Whilst not technically a sport, it should be for those among us that prefer eating to other sporty activities.

These root chips are an example of calorie dodging. During a recent chip night, we bought a packet of root chips with beetroot, sweet potato and parsnip chips. They were delicious but full of oil and salt so I decided to try and make a baked version that was not only healthier but easier because I dislike deep frying. 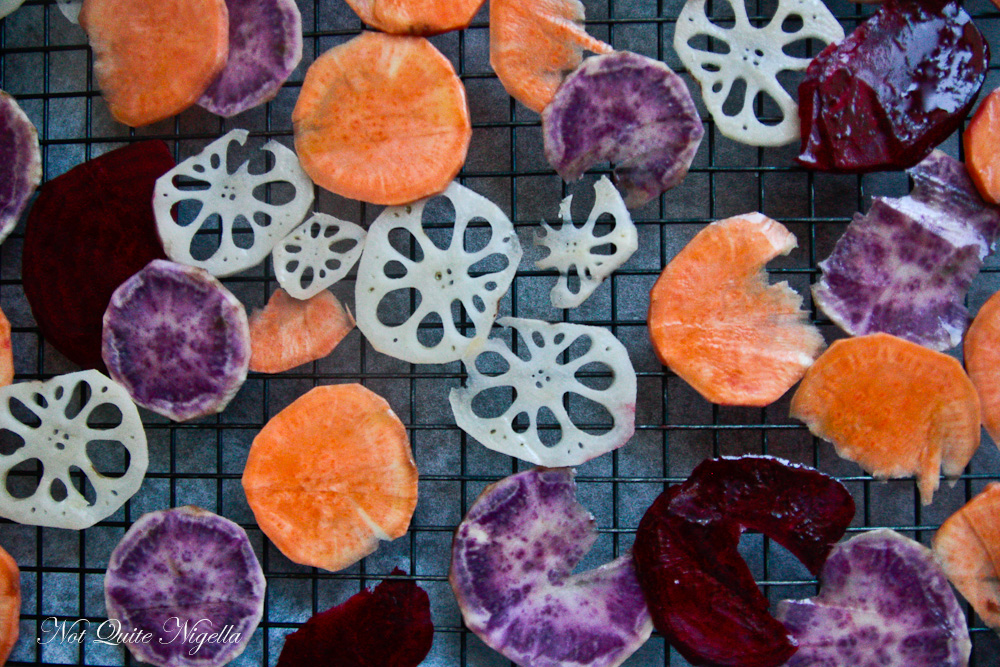 "Roots!" I kept saying to myself over and over at the market. I bought orange and purple sweet potato and then picked up something that looked like a loofah. It was a lotus root. Having eaten deep fried lotus chips at Japanese restaurants I purchased this along with some beetroot. Truth be told but I didn't expect these to work and I envisaged testing these out several times, each time greedily eating all of the failures.

I was pleasantly surprised that these chips were so easy and delicious. The best vegetables to crisp up were the lotus root and the purple sweet potato. Both have less moisture than the orange sweet potato and the beetroot which admittedly needed a second batch of testing. What I really liked was how filling and crisp they were but also the fact that I didn't add any salt to them and they were still deliciously good. I also felt much less guilty eating a bowl of these than I did a packet of bought chips. I even gave some to Mr NQN to eat while he was engaged with watching some sport on television. I declined to join him but ate mine while watching movies.

So tell me Dear Reader, have you been following the World Cup or Tour de France? Do you eat snacks while watching television?

Cooking time: up to 30 minutes 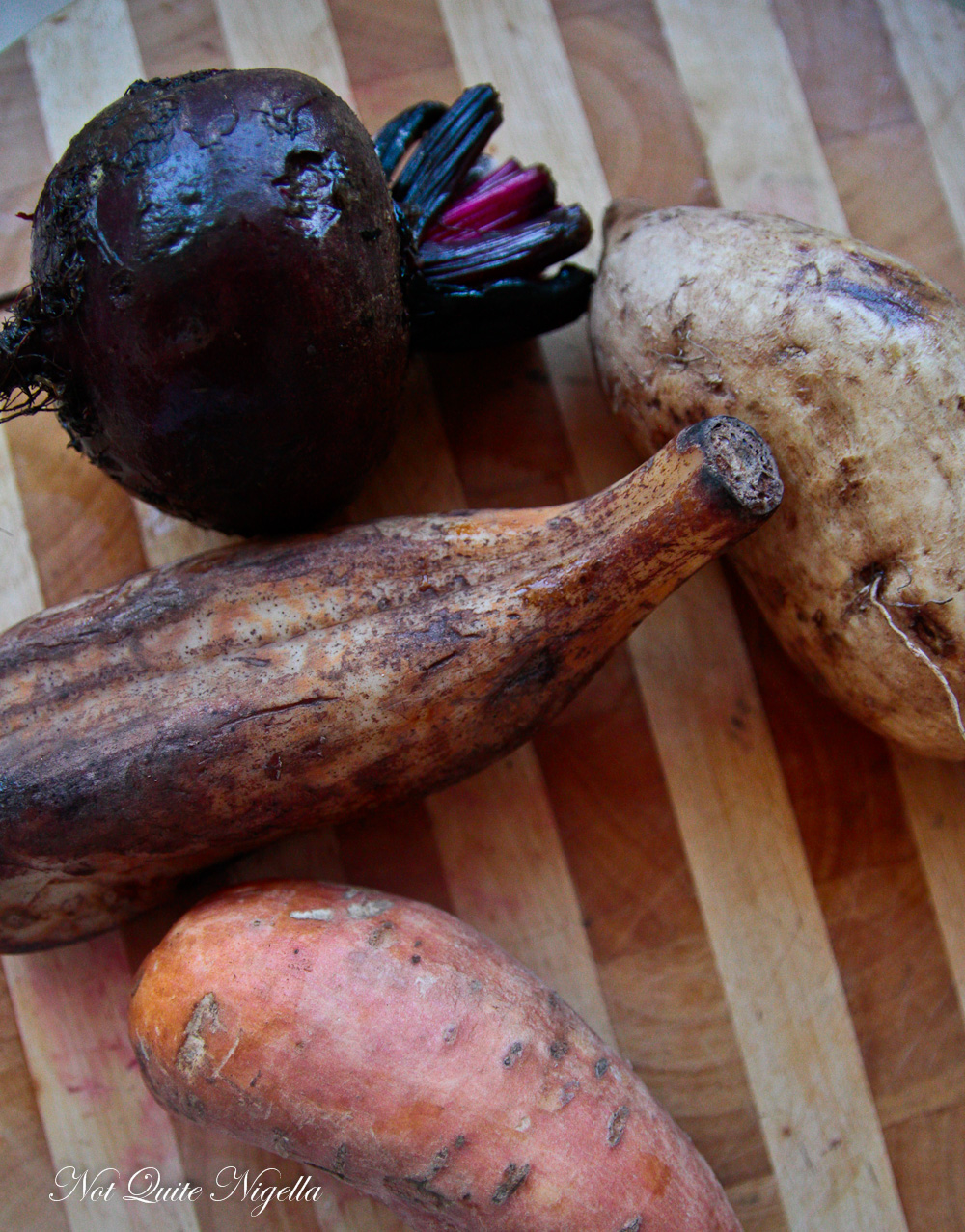 Step 1 - Preheat the oven to 200C/400F and line two baking sheets with parchment or a rack if you have a couple of racks. Peel the vegetables and set the mandolin on #2 setting. Carefully slice the lotus root, purple sweet potato and orange sweet potato. Place in a bowl and drizzle with oil - you don't need much just enough to coat it lightly (don't drive yourself too crazy coating each piece or you'll wish you had just bought them). 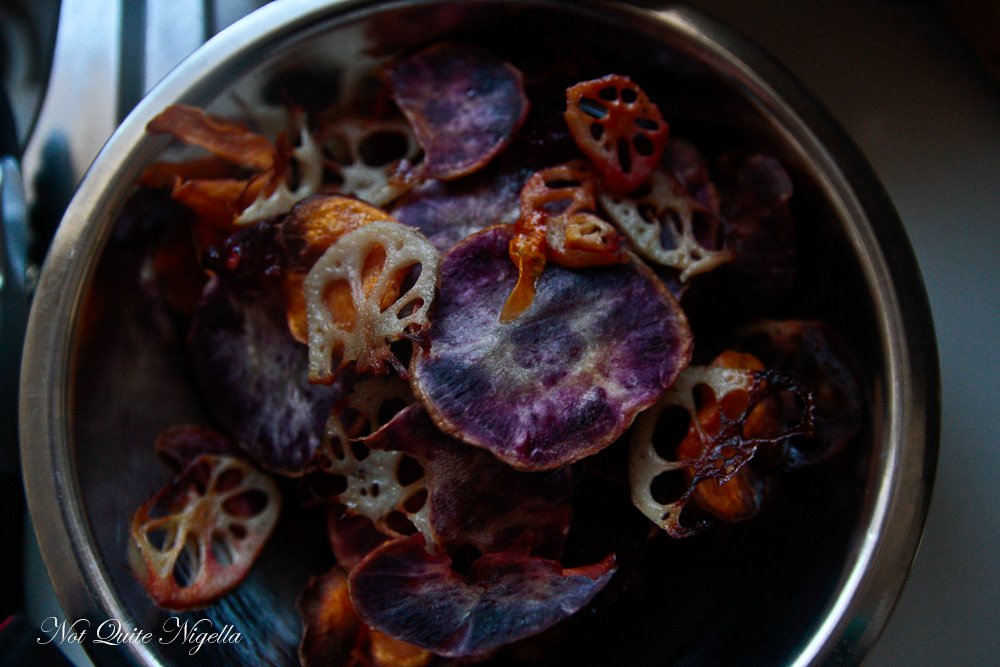 Step 2 - For beetroot, reduce setting to #1 on the mandolin (thinner) and slice the beetroot. You want half moon chips for the beetroot as it is much more moist (sorry :P) than the other vegetables so thinner fragments are the best way to get crisp beetroot chips.

Step 3 - Spread them out onto the lined baking sheets but separating them according to the vegetables (not like I've done them in the picture above). Each vegetable cooks slightly differently and I find the lotus root and purple sweet potatoes crisp up the easiest, fastest and best. You may have to do in two lots. Bake for 15 minutes and then check the chips - some of the smaller fragments will already be finished. Sometimes they can take as long as 30 minutes to bake depending on how thick they're sliced. They crisp up even further upon cooling. I don't add any salt to these but add it if you want to. They're best eaten on the day as they get a bit soft with time.