One Crazy Night in Redfern On A Food Tour

Redfern the suburb has a bit of a reputation. If you mention Redfern to some, their eyes widen and there may be a touch of apprehension. However it's a suburb that I have seen change throughout the years. Whilst there are some areas you would want to avoid, the main streets of Redfern have become gentrified with small bars, hipsters and cafes lining the street. 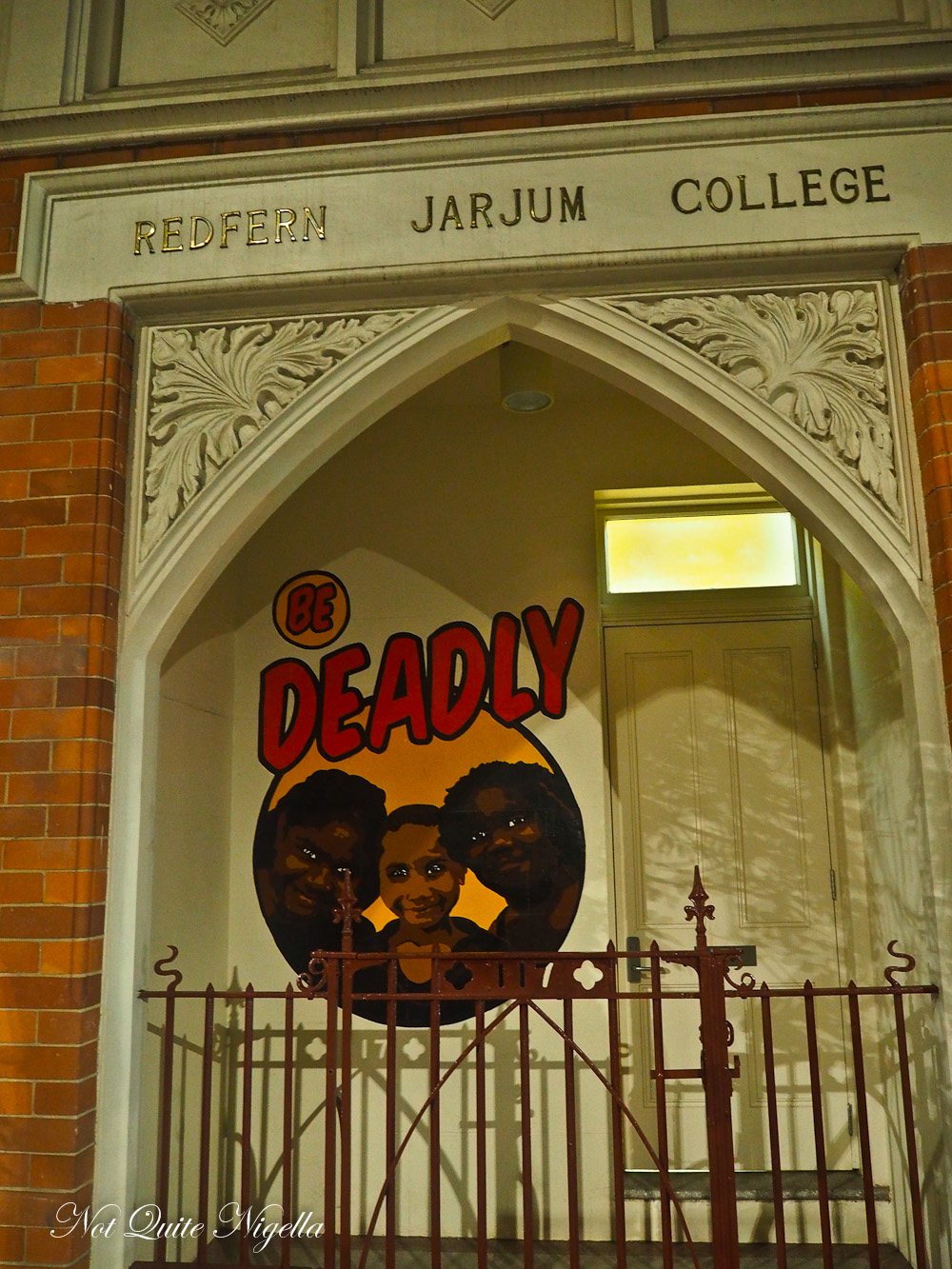 So there we were, five of us about to do a Redfern Food Crawl curated by Guerilla Eats. It's a different food crawl from most in that it is self guided so all you need to do is book and pay ($75 per person) for the time that you want and have an entree at one main, a main at another and a nightcap or dessert at a third place - all within walking distance from each other. Everything is pre paid and all you need to do is tell each place that you're part of the Guerilla Eats experience. I had Mr NQN, Louise, Viggo and Nick along...except where was Nick? 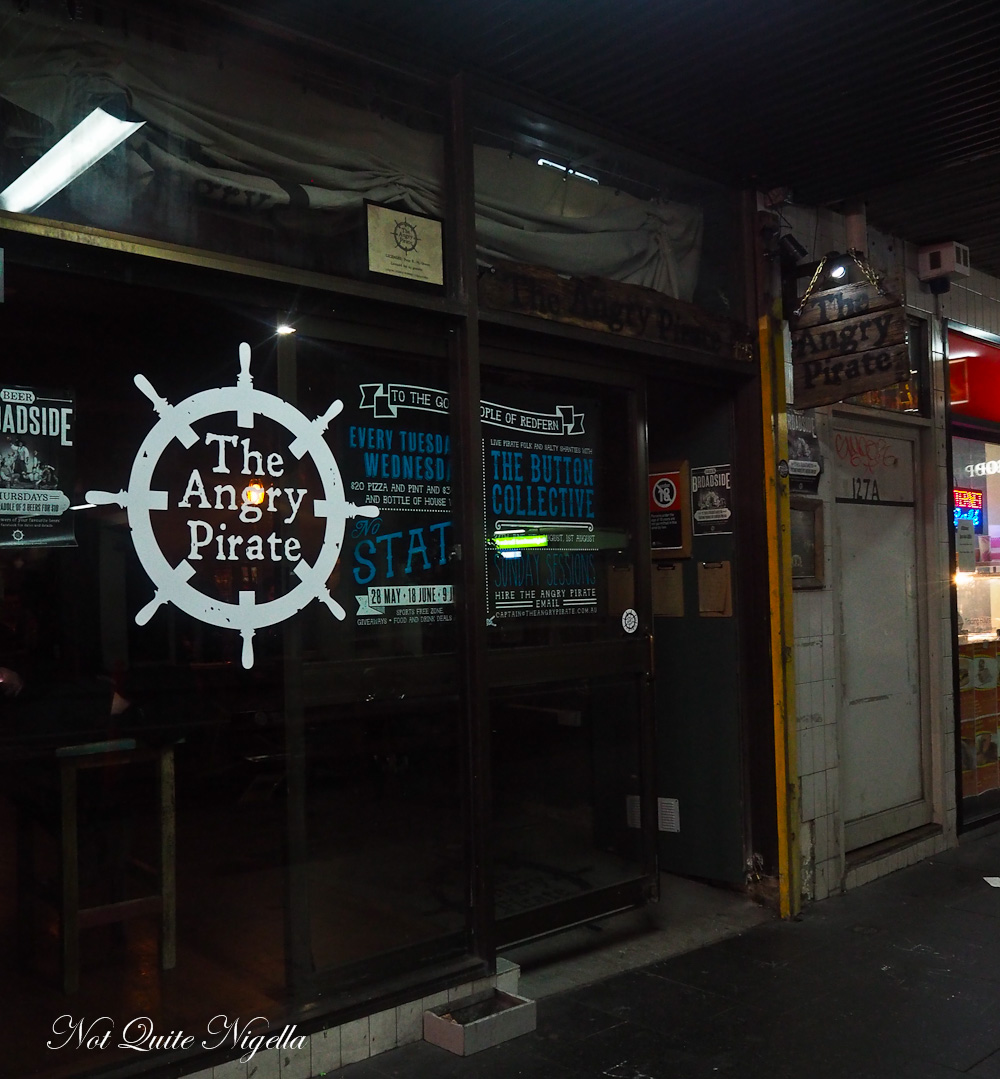 The instructions given to me said to meet at The Angry Pirate on Redfern Street but a computer glitch meant that both Viggo and Nick had received the wrong "treasure map" and were instead in possession of a map for the Surry Hills tour. Viggo had noticed it so he had asked me but Nick hadn't so he was busy circling Surry Hills while we were sipping cocktails in Redfern. 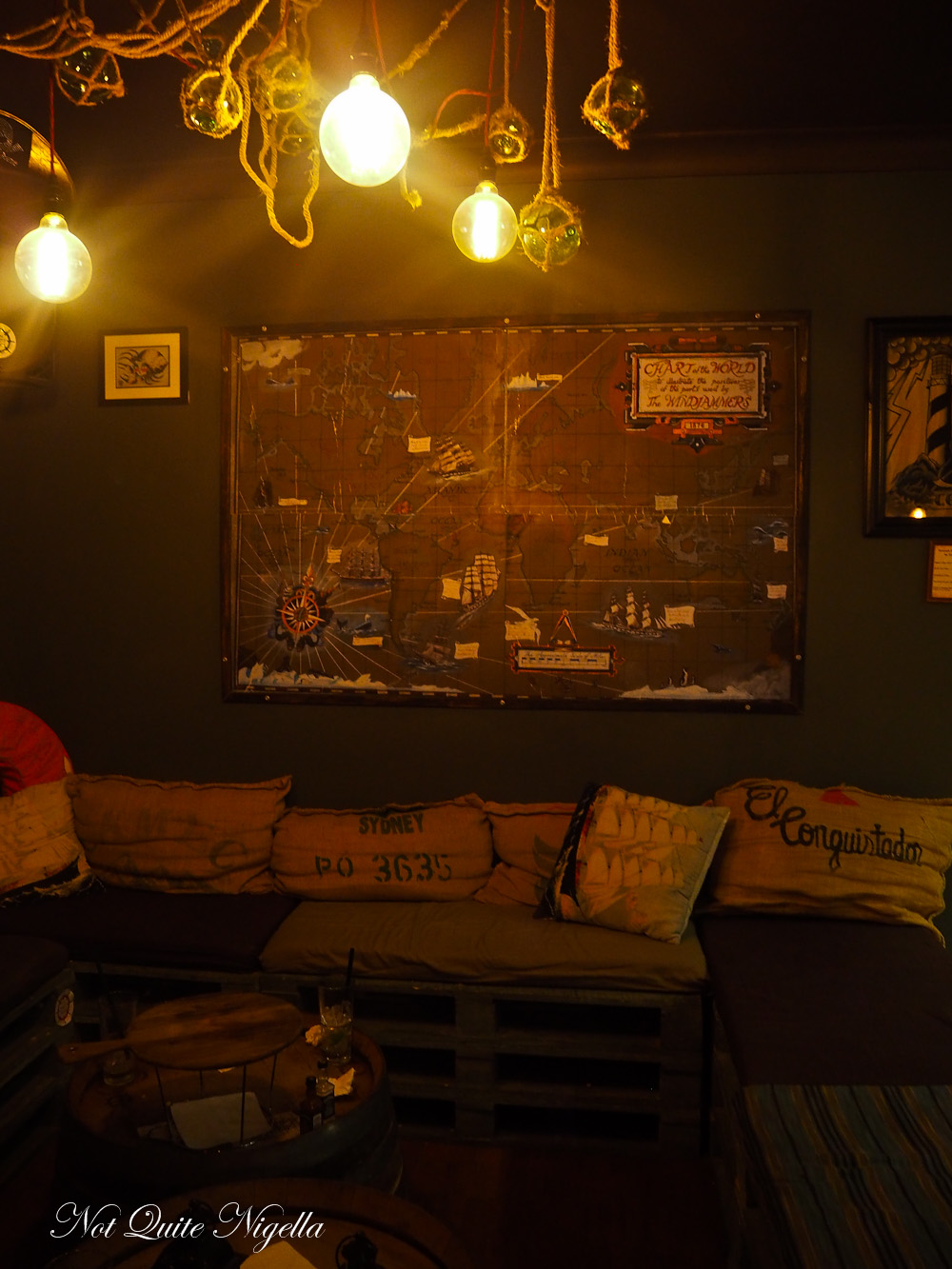 The glitch is related to booking on a phone and presumably these are teething problems that will be fixed. Nevertheless, when Nick finally arrives we are busy munching on bowls of popcorn and sipping a pirate themed drink made exclusively for the tour. There's a sign above a door that counts the number of days with "No d**ks, no crazies". The tally sits at 15 days. 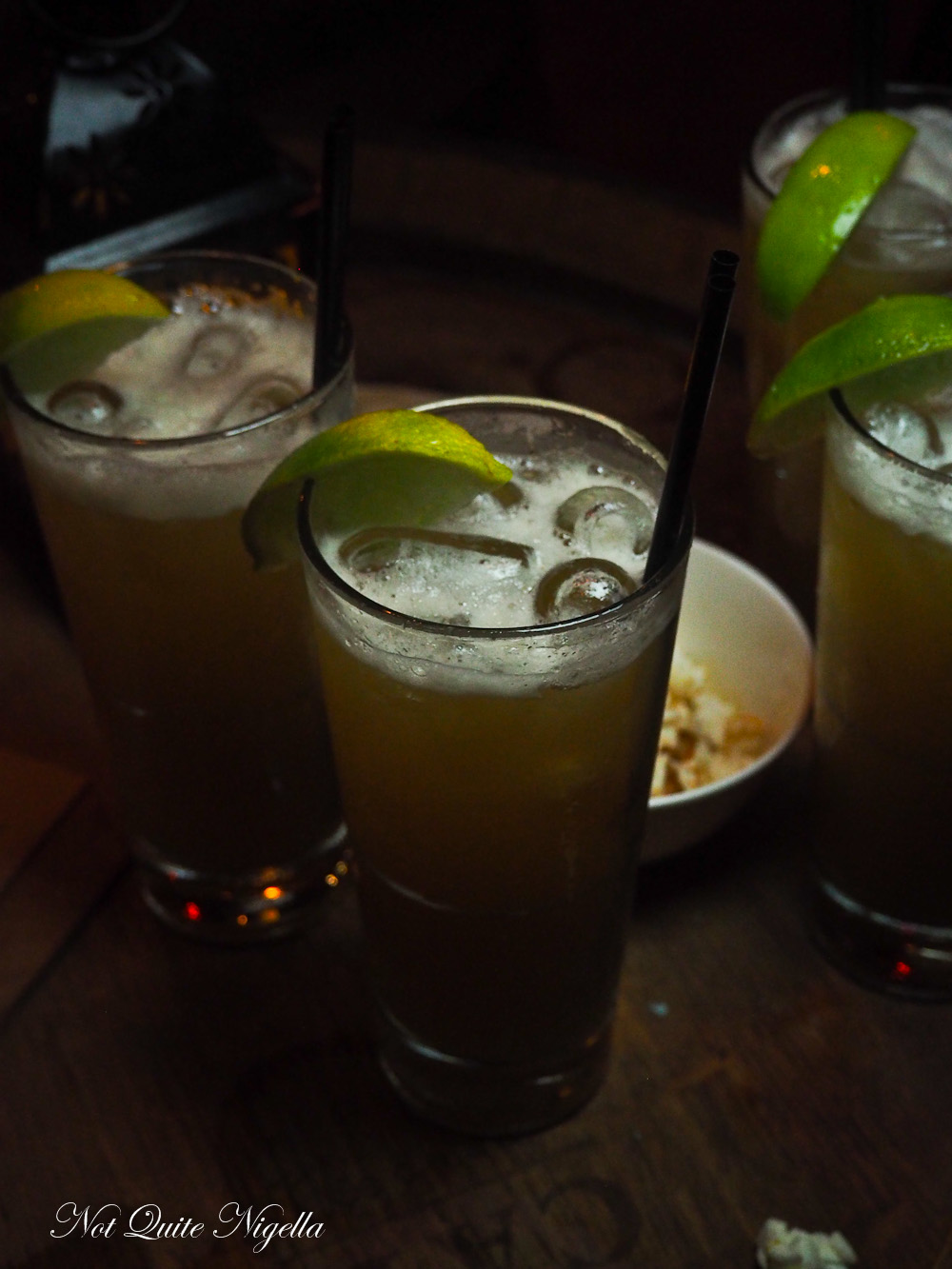 Bar owner Pete Groom explains how they make the spiced rum for the cocktail. It is a mixture of three rums (Havana Club and Captain Morgan's, the third is a secret) mixed with a 15 steeped herbs and spices. Coconut and mango is then added and mixture is steeped for a further 48 hours before being stored in a wooden barrel. The cocktail has a mix of this spiced rum as well as pineapple, lime, brown sugar and is absolutely delicious. We hand Nick one as he walks in flustered from the cold and last minute change. 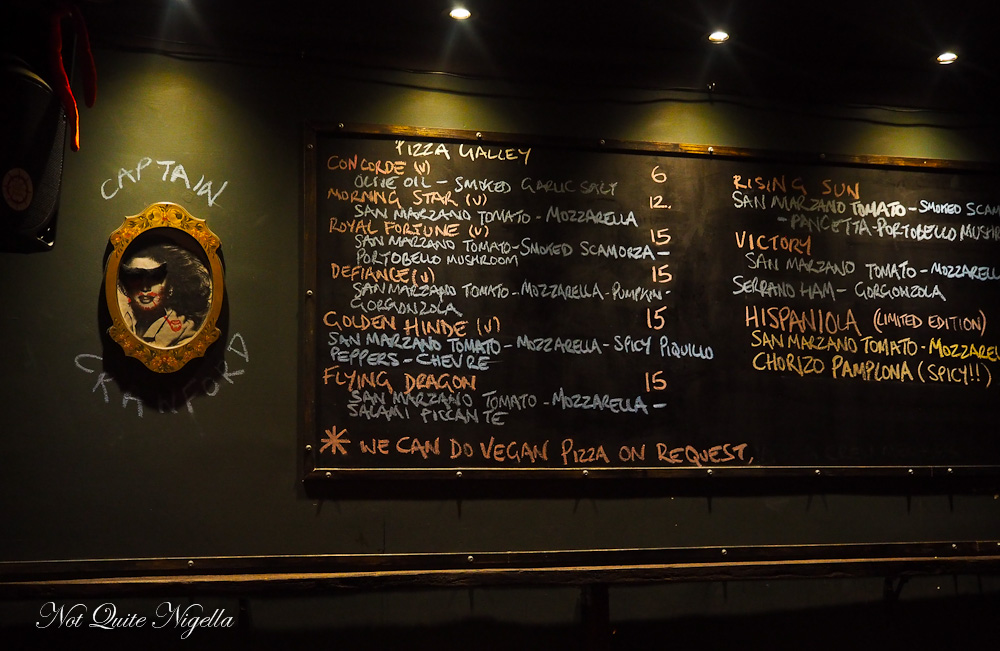 The entree course at The Angry Pirate is pizza and Pete tells us that between the five of us, we will get three pizzas of our choice. The Hispaniola is the best seller and we choose a couple of other version including a vegetarian one to try. If you were to buy the pizzas, they range from $12-$17 each. 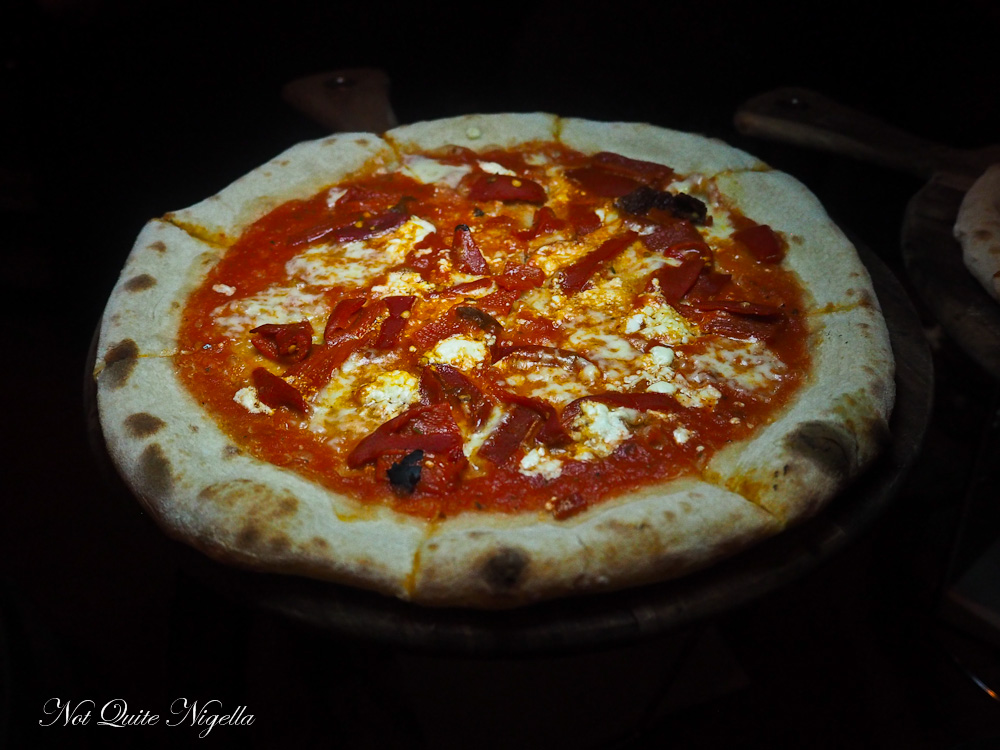 All three pizzas arrive at once with small shakers of smoked chipotle and salt. We start with the vegetarian pizza the "Golden Hinde" with San Marzano tomatoes, mozzarella, spicy piquillo peppers and a good amount of goat's chevre. It's actually very tasty indeed and doesn't make you feel as though it is lacking flavour by not having meat. The pizza dough is excellent. 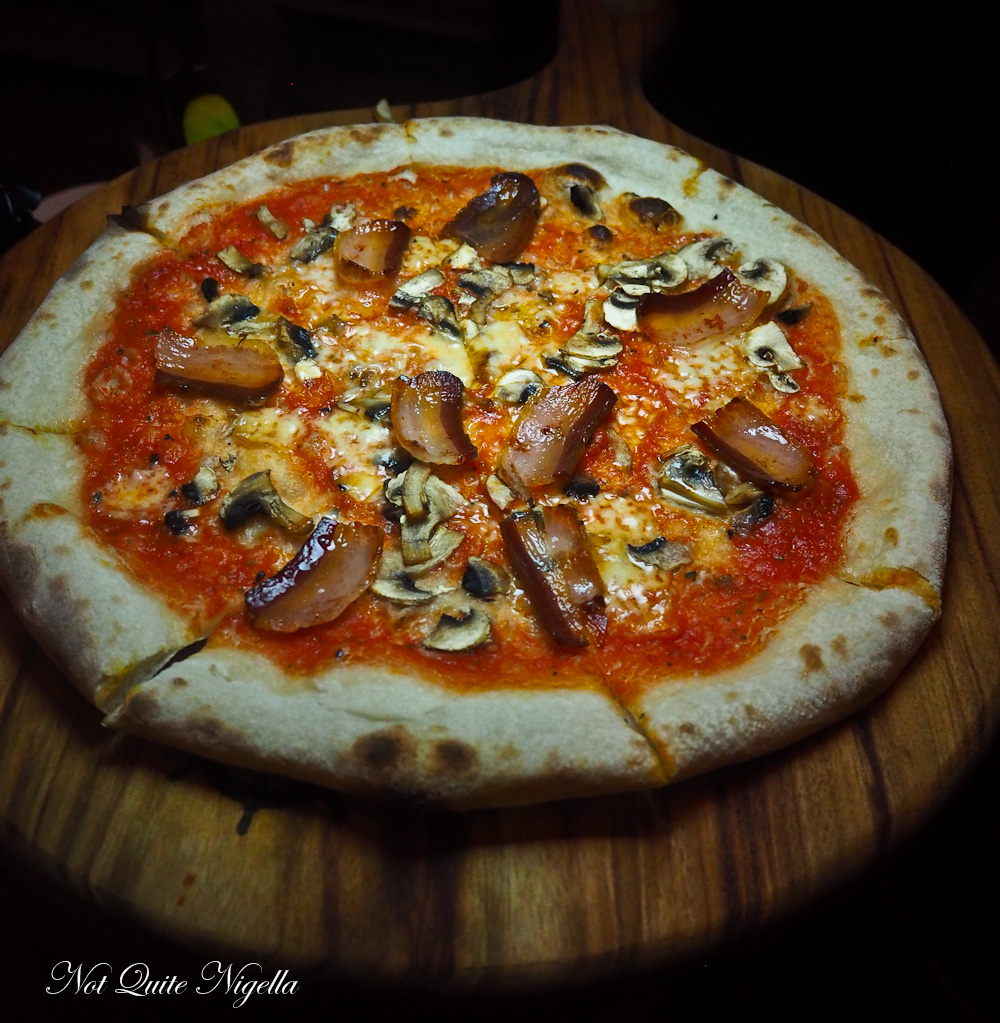 Next we try the Rising Run, a pizza topped with San Marzano tomatoes, smoked scamorza cheese, pancetta and mushrooms and this is my favourite. There is just a single piece of pancetta per slice but a little goes a long way and I take a second slice of this. Luckily we all like different pizzas. 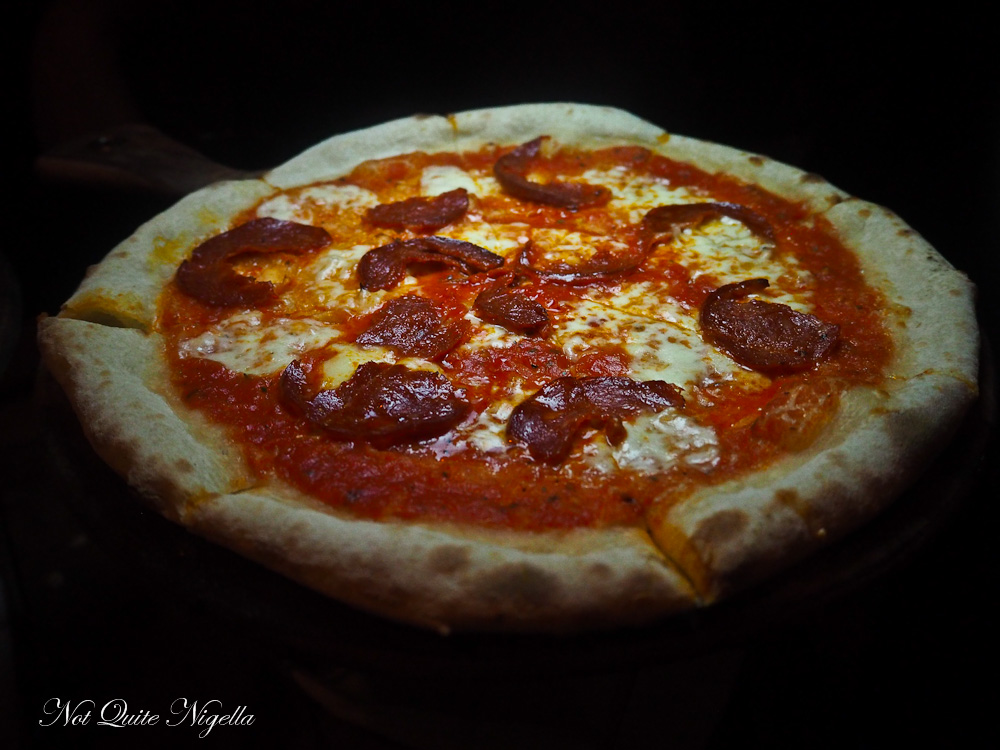 The third pizza is the Hispaniola with San Marzano tomatoes, mozzarella and chorizo pamplona. It's spicy although not atomically so but it gives a nice buzz to the pizza and we love the simple topping. 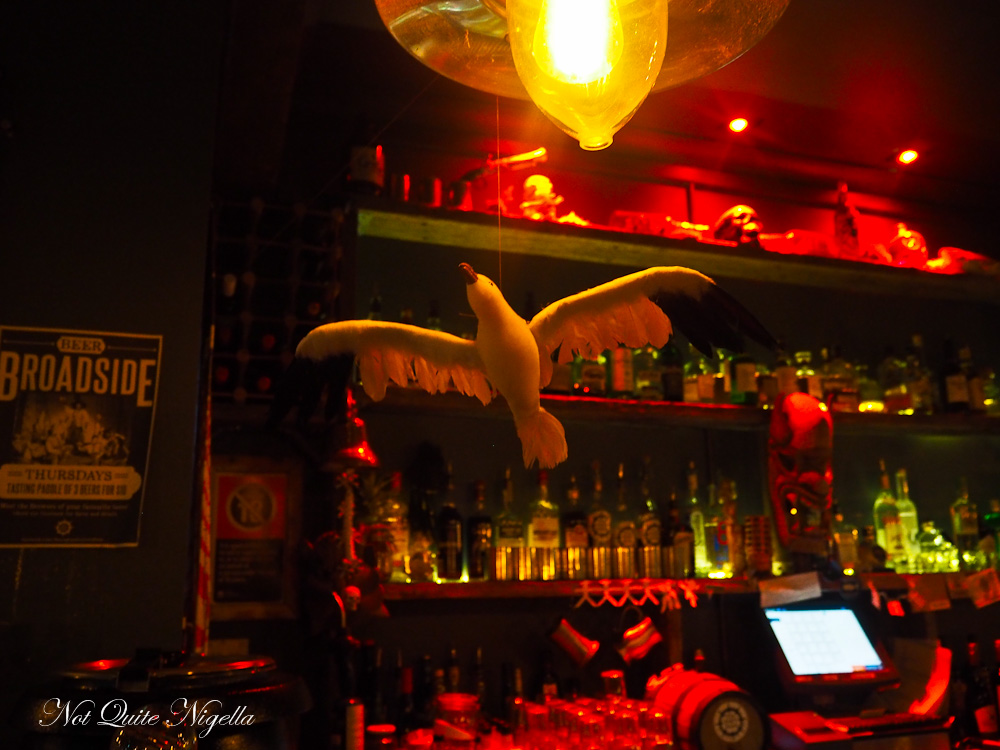 Saying goodbye to the parrot, seagull and the friendly staff at The Angry Pirate, we take the short walk to Pitt Street, a few minute's walk away to Pitt Street Diner. A sign on the door promises warmth from the chill and indeed it is toasty warm inside. We remove coats and layers and take a seat at the table reserved for us. 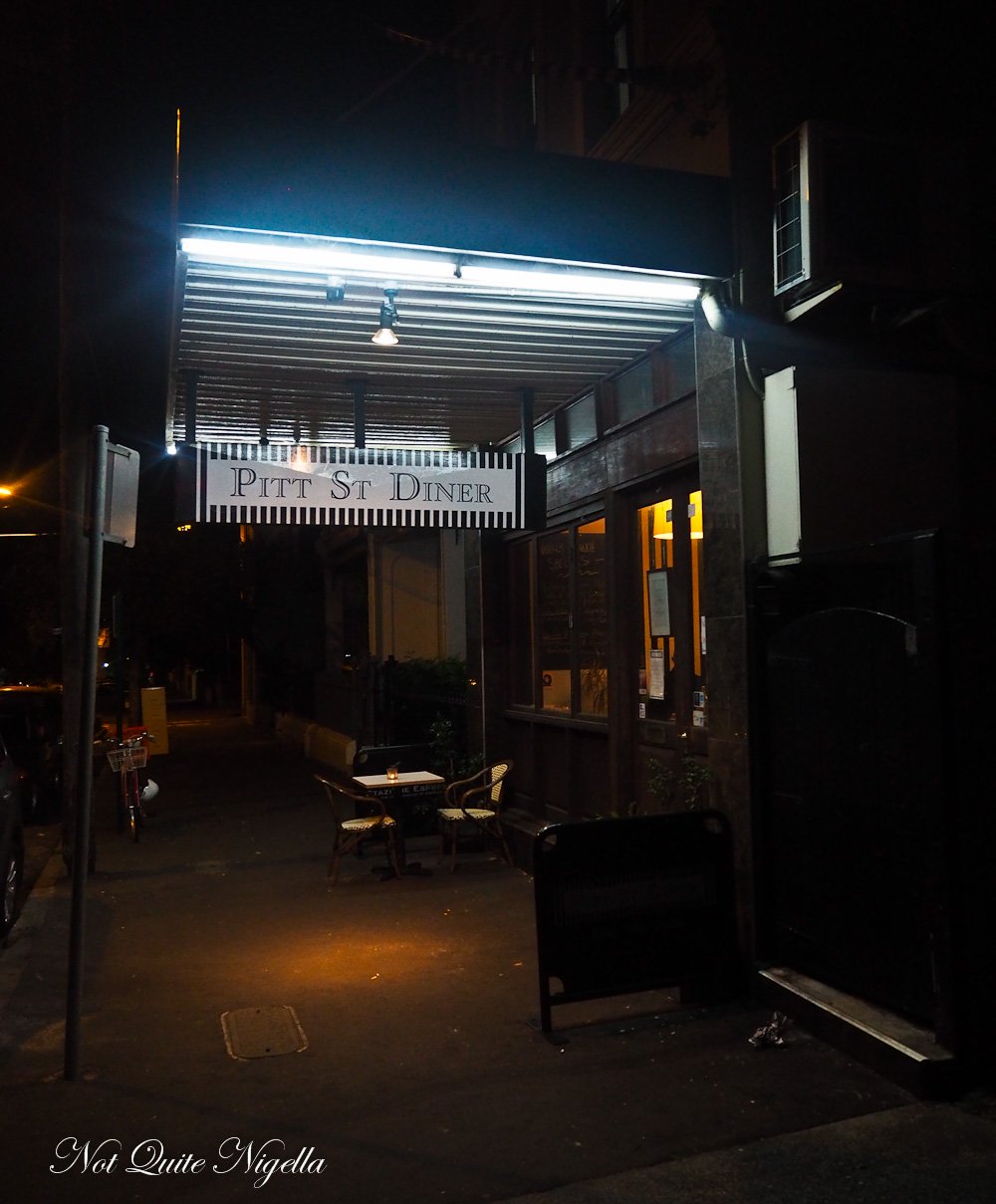 We're pleasantly surprised that we are offered both a main and a drink of our choice. The tour is great value, particularly if you drink (although there's a little disclaimer on the t&cs that discourages drinking which seems contrary to the tour) and choose some of the more expensive dishes. 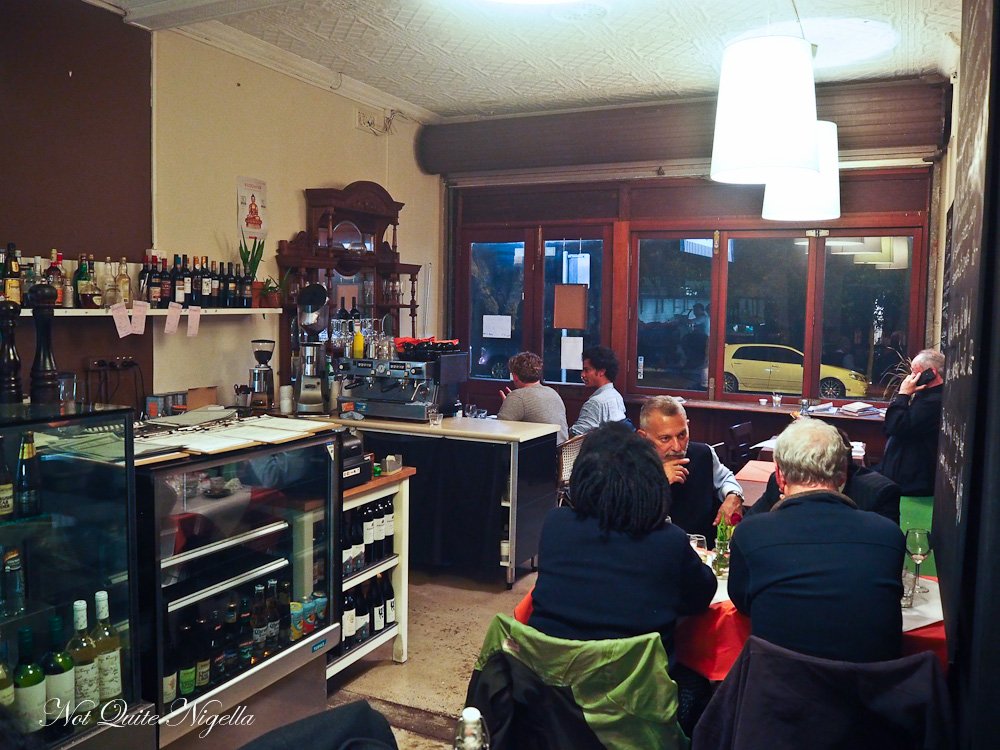 Our choices already have our total up to $62 per person without the extra glass of wine and final nightcap. One thing that we weren't quite sure of was tipping and whether the staff were already tipped. We place our order and aren't waiting long before our mains arrive from the open kitchen just near our table. 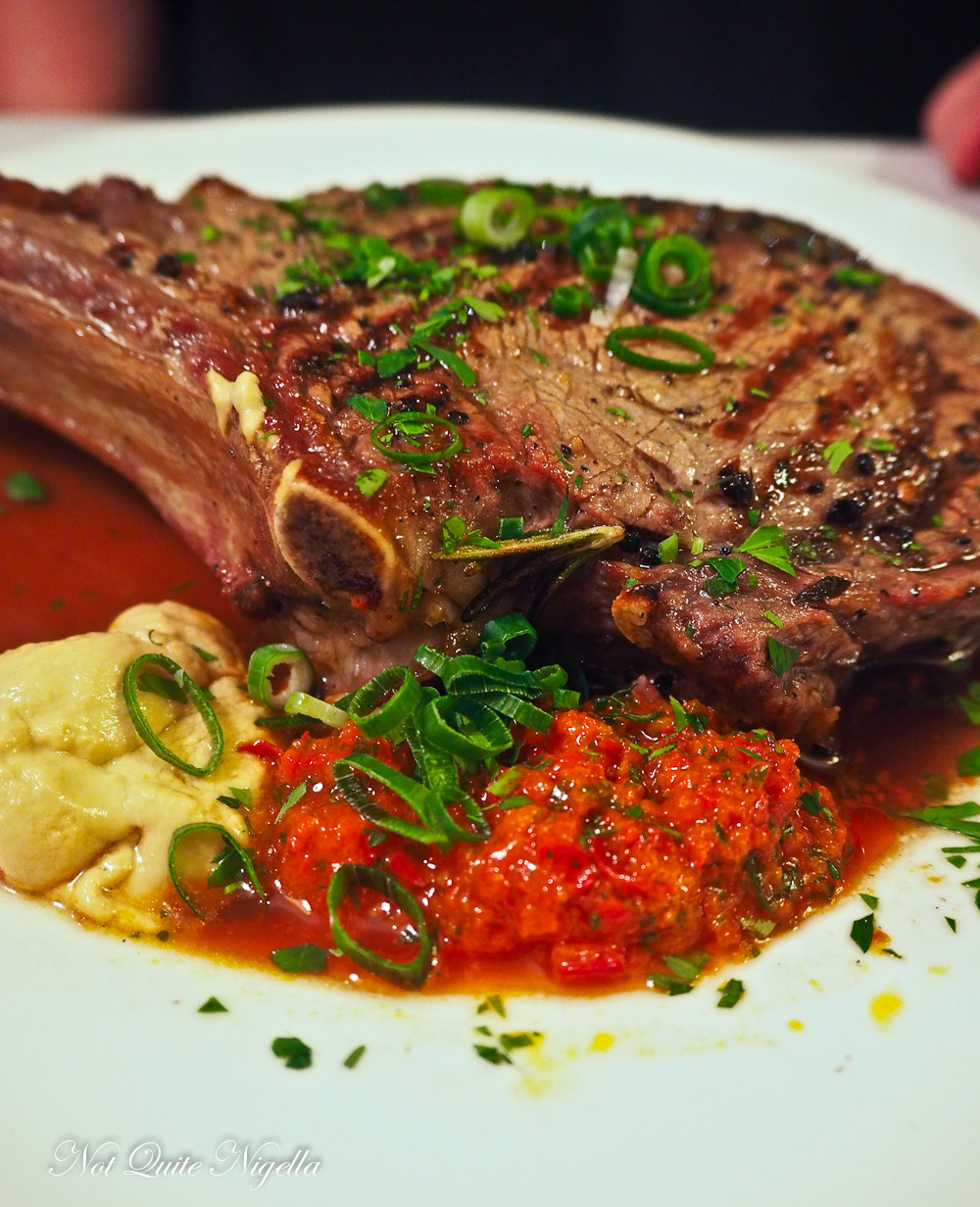 I tried some of Viggo's steak. The rib eye is cooked perfectly as ordered with a chimichurri sauce and a lot of jus. There is a generous bowl of fries with it and he likes the steak. I find the piece that I try tender and flavoursome. 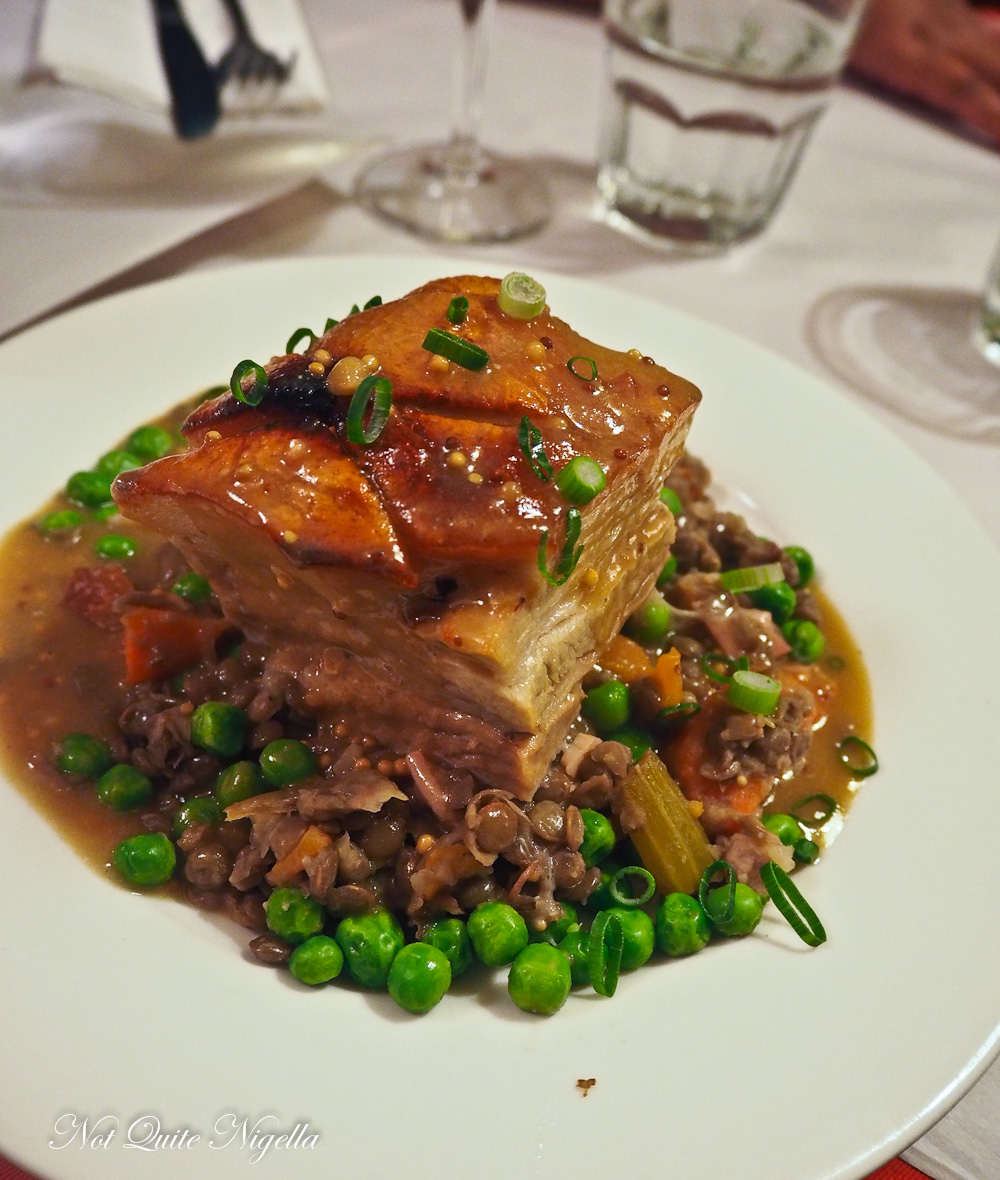 I've put prices here just to give you an indication although of course we didn't have to pay while in the restaurant. Alas Louise isn't smitten with her pork belly and finds that it needs more cooking time to become more soft and melting. 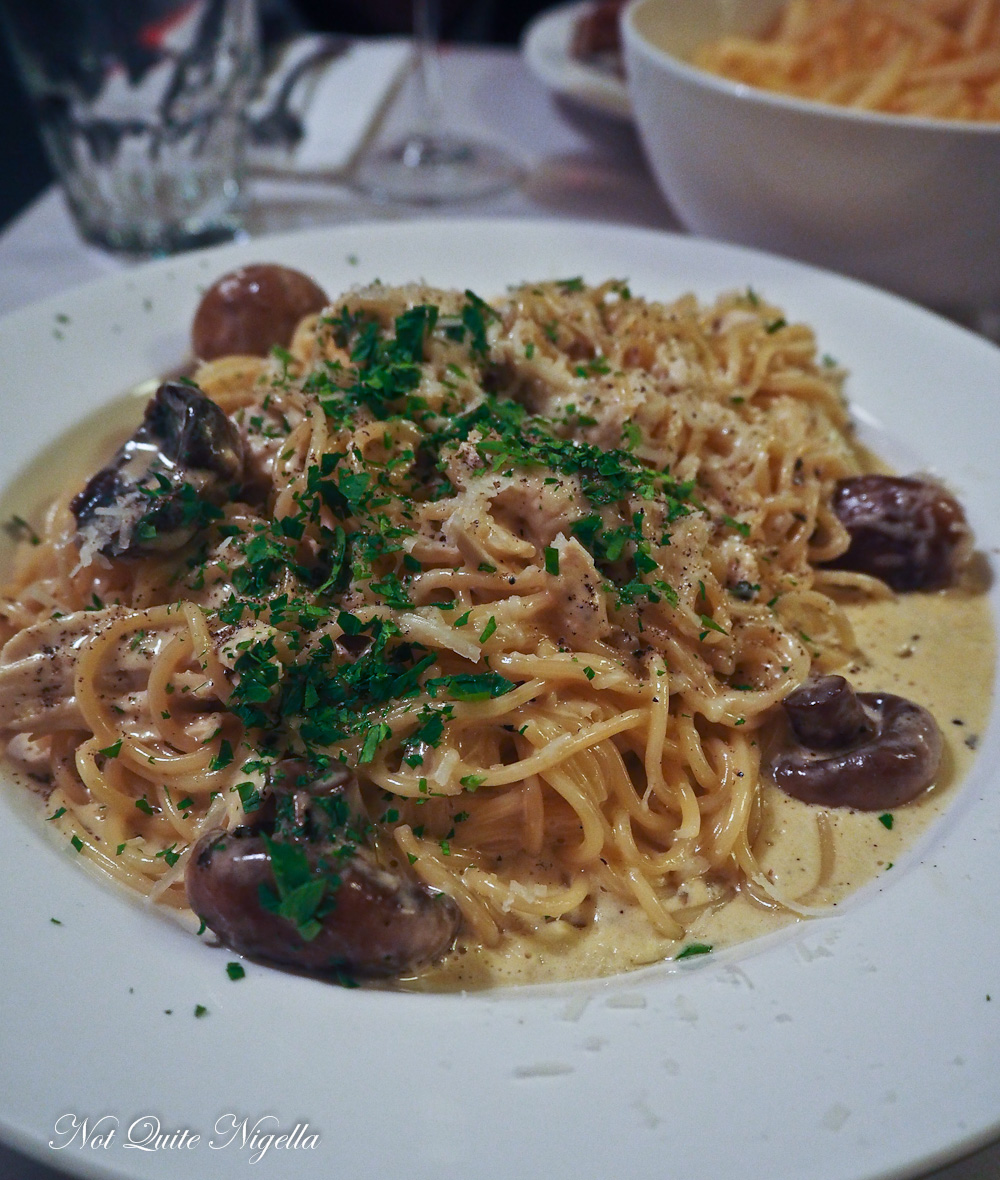 Mr NQN is happy with his enormous bowl of pasta with chicken, mushroom, white wine, garlic and cream and it's such a sizeable dish that I help him polish it off. 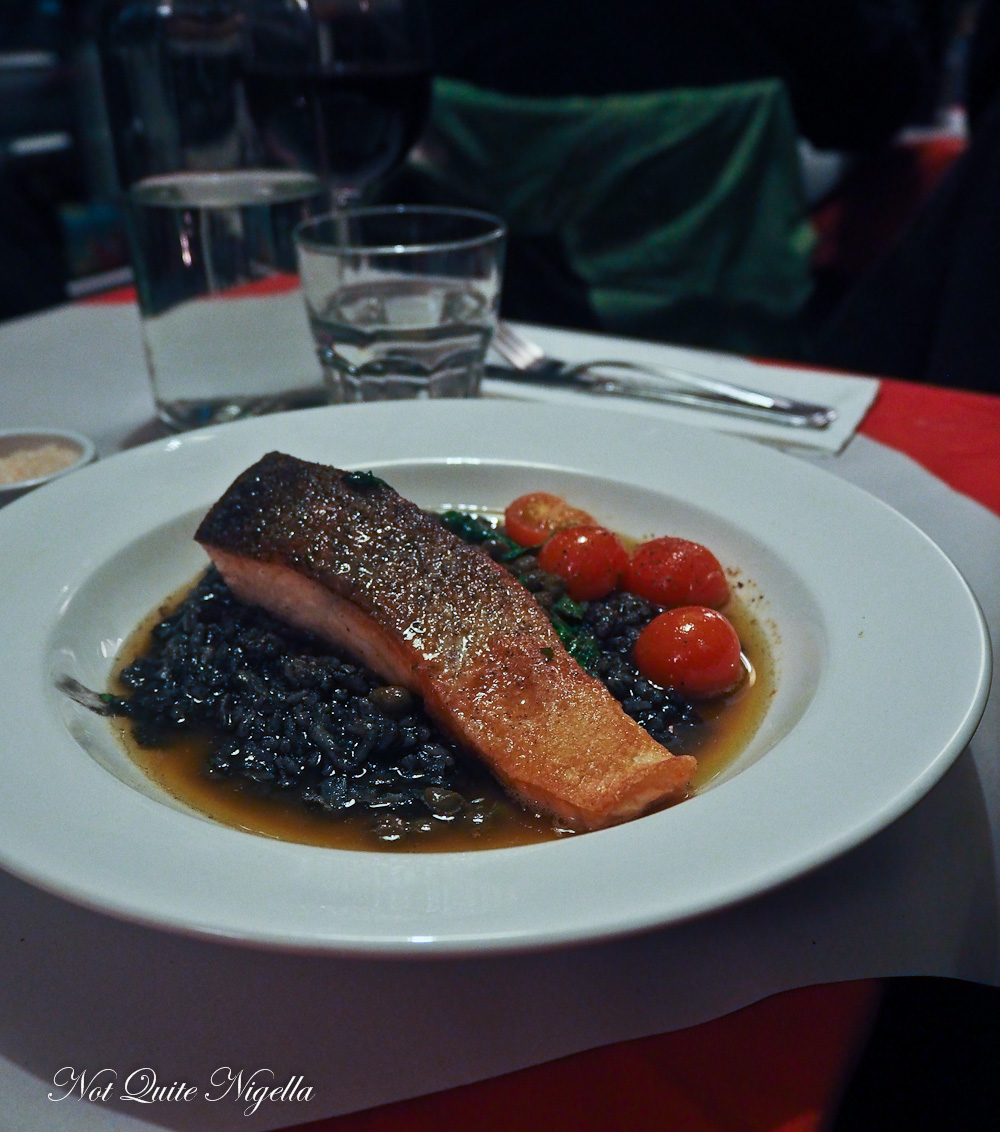 Nick is a big squid ink lover but while the salmon is well cooked, he finds the squid ink risotto very strong in lemon. 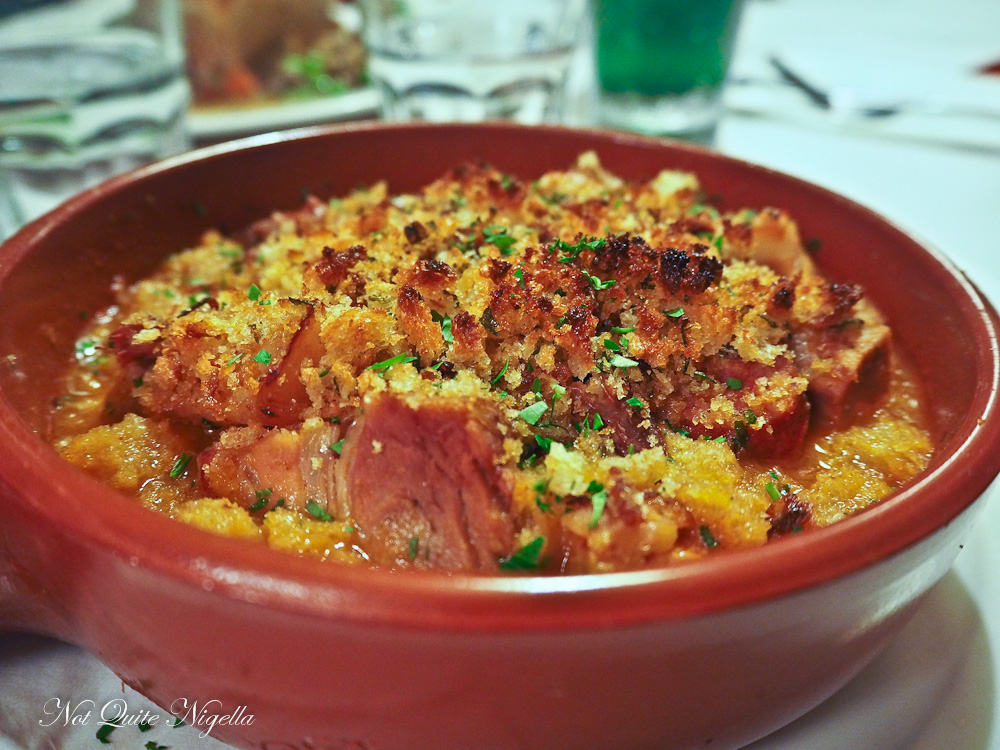 My choice is the cassoulet. There is a good variety of meat in this dish from sausages to pork belly and beans. It's a lighter version of cassoulet than I've had and less rich. 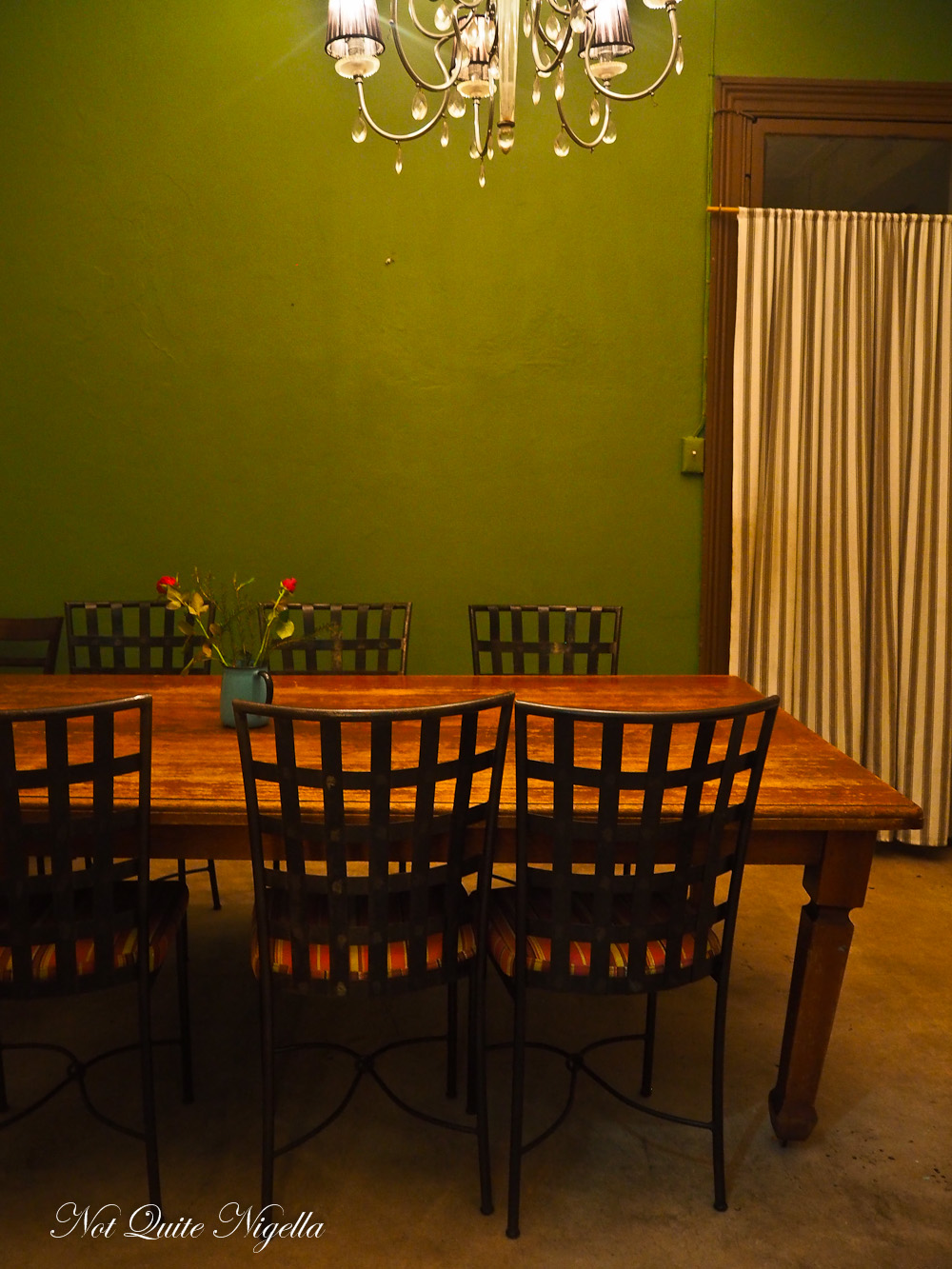 By now it's getting to around 10pm and it's a Wednesday night so we make our way to our last stop, back on Redfern Street. "What is that?" Nick cries out and points at the Martian Embassy Shop. We take a peek in to the window curious to see whether aliens have landed before we are lured into our final destination, The Dock. Although it's a week night there is a large crowd gathered. We've made it just in time for Wednesday's trivia night! 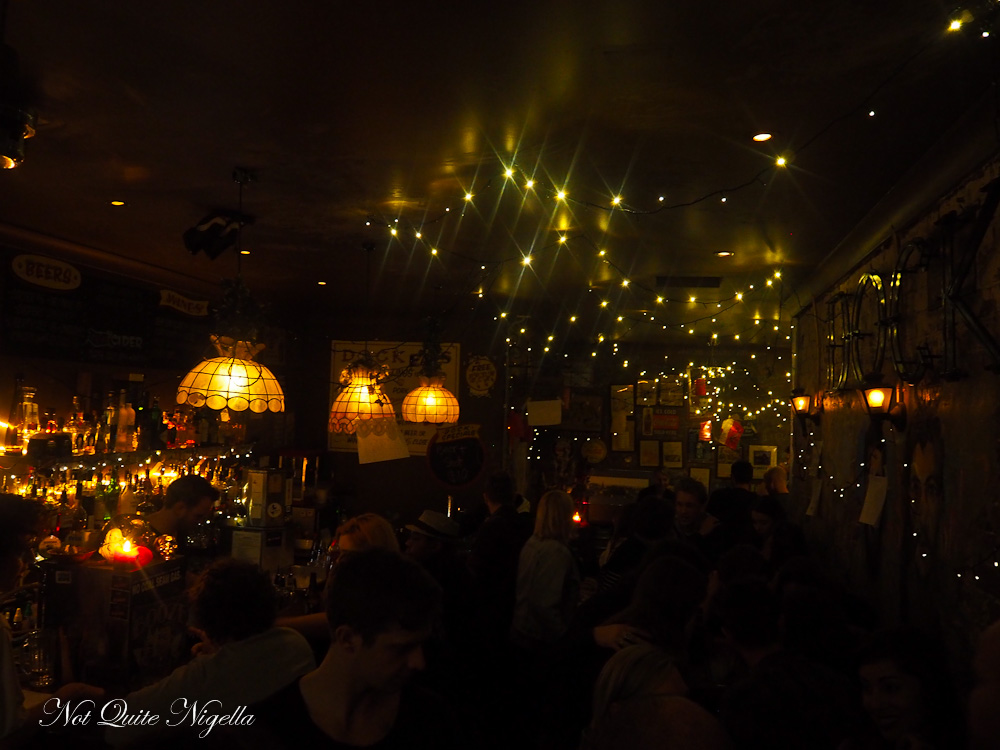 Our final course at The Dock is a nightcap and they hand us our amaretto sours and cherry sours (cherry for the girls, sours for the guys). The emcee of the trivia night asks us if we would like to join and we figure why not. They ask us to make up a name with a suburb and a verb or noun. 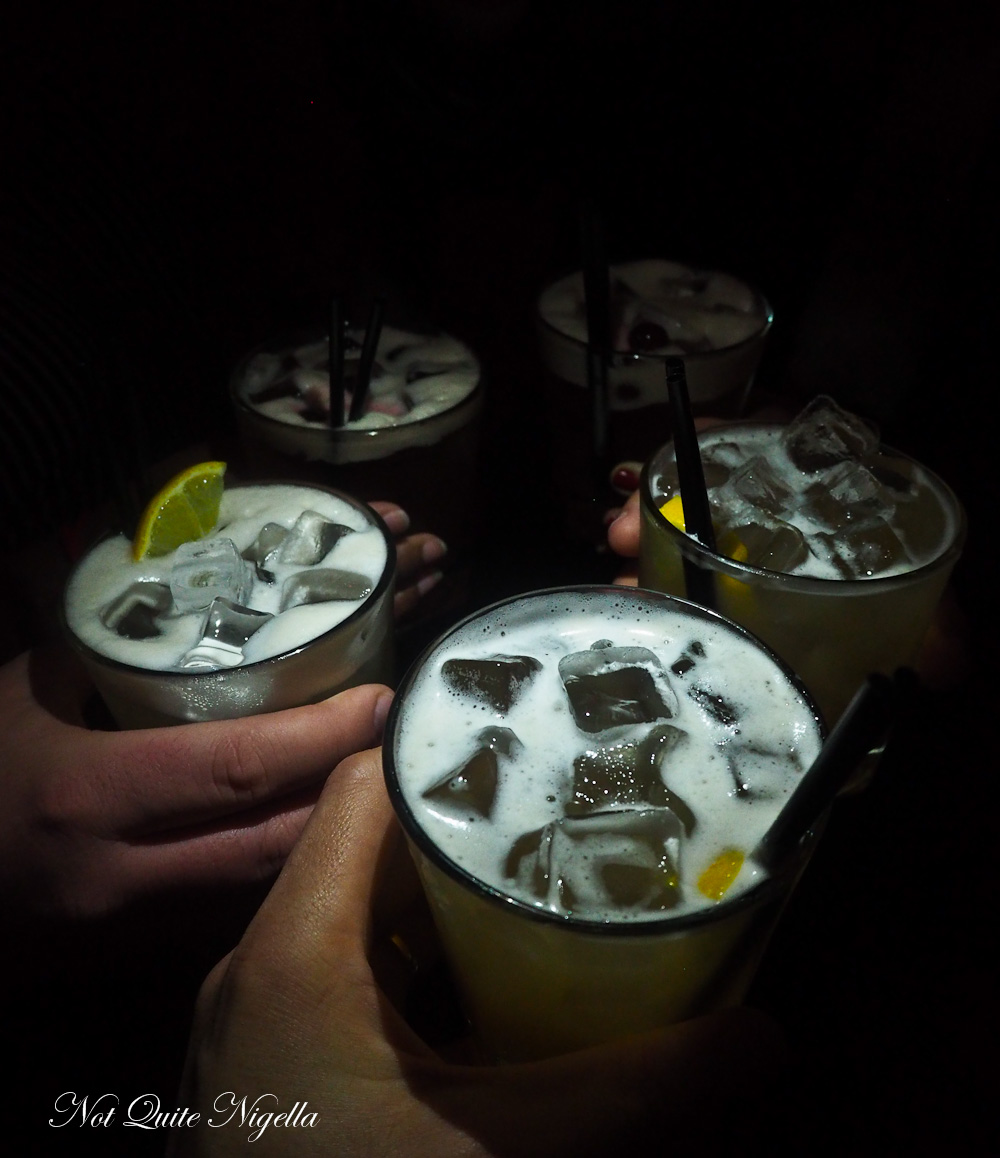 We look around and there are "Stanmore Slappers", "Granville Chickens", "Surry Hills Sl**s" and the "Penthouse Wives of Woolloomoolloo". Mr NQN blurts out "Petersham Perverts!" "Where did that come from?" I ask him and he points to the other group names. None of us actually live in Petersham but there you go, that's our name. And I recall my friend Elly telling me that when she visited The Dock, everyone agreed to lift up their clothing tops simultaneously so I guess we got off lightly! 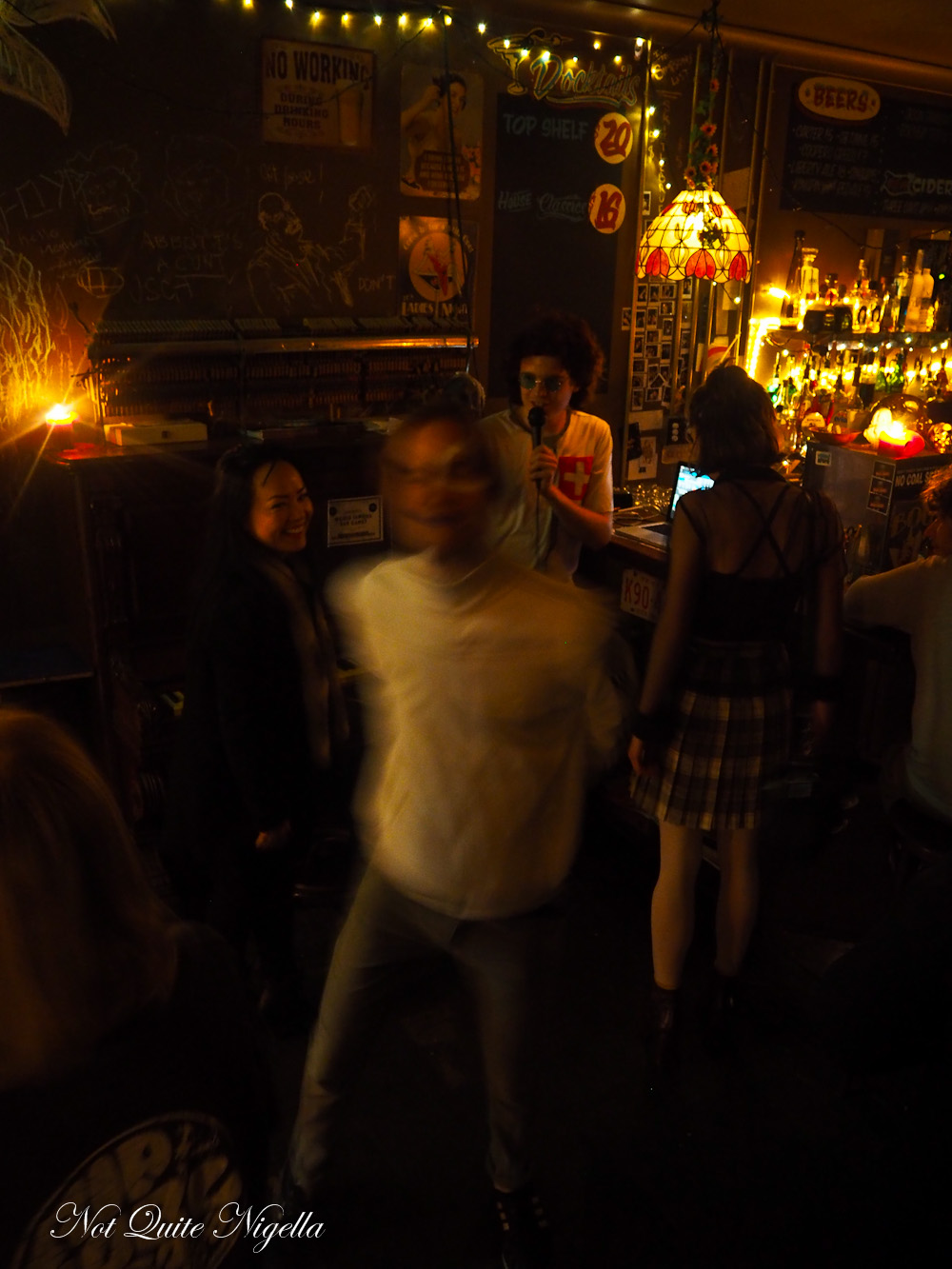 Trivia Night is divided into four categories and the first is a music category that mercifully has a good selection of 80's questions. A heads or tails game is played between the first two categories and then we do the movie category which is also straightforward. The boys are really no help and Nick tries to assist by shouting out the wrong answers to everything - before Mr NQN pointed out Nick's strategy to me I was rather worried that he was a bit half witted! 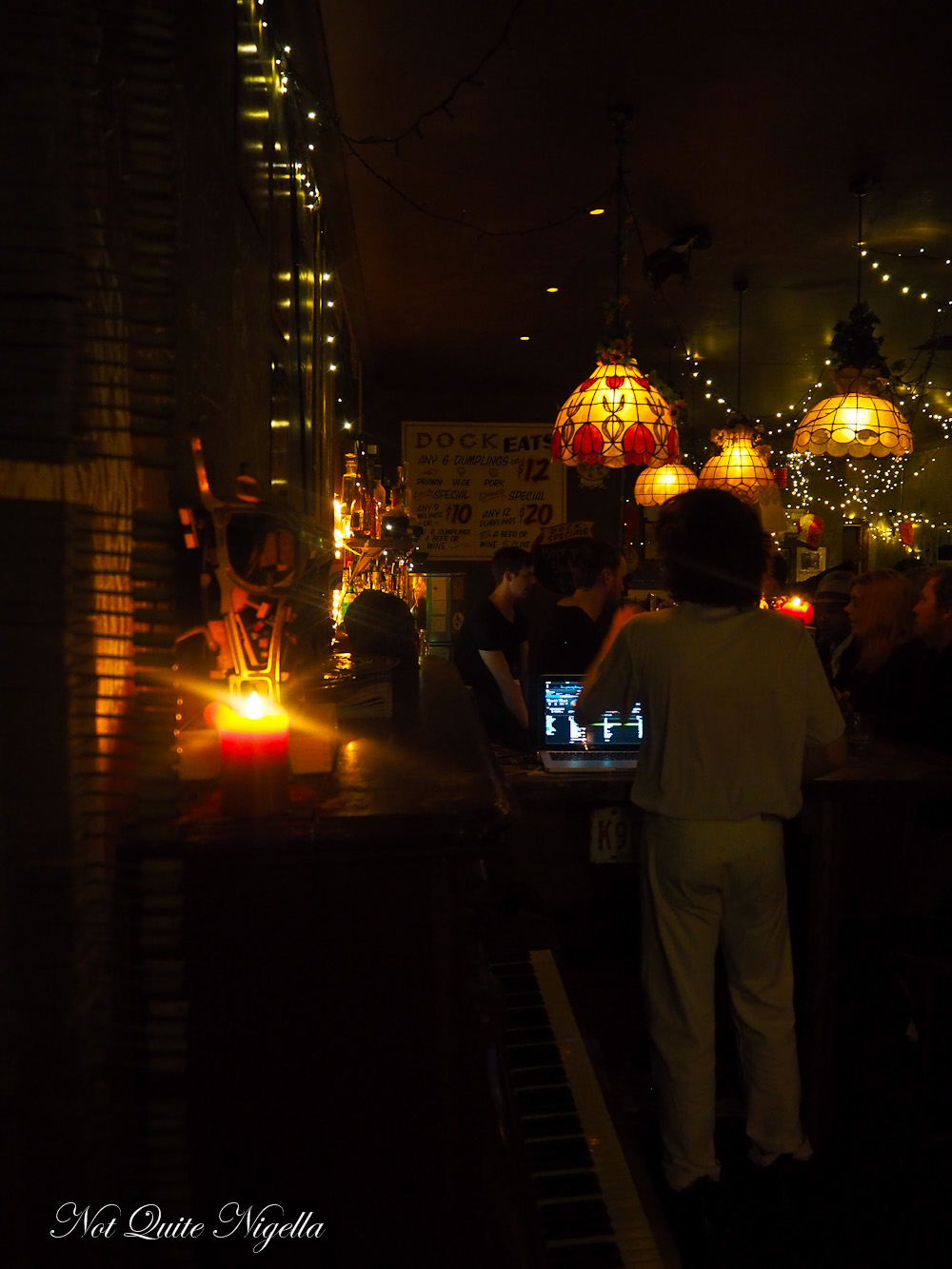 By now it's getting to 11pm and given that everyone has early morning meetings, we reluctantly leave the premises but not after a round of the notorious coin game that involves people placing a 50 cent coin between their (clothed) buttocks and dropping it in a cup. Mr NQN participates for our group. I have always thought that his bottom was perfect and he gets close but the coin bounces out of the glass. We leave The Dock just as the champion of the coin game downs their prize drink. A shame as we really wanted to stay and see where else the night lead us...

So tell me Dear Reader, would you enjoy a progressive tour like this? Do you like the idea of a self guided one or would you prefer to join a group to meet more people? Which stop did you think sounded the most interesting? Are you good at trivia nights? 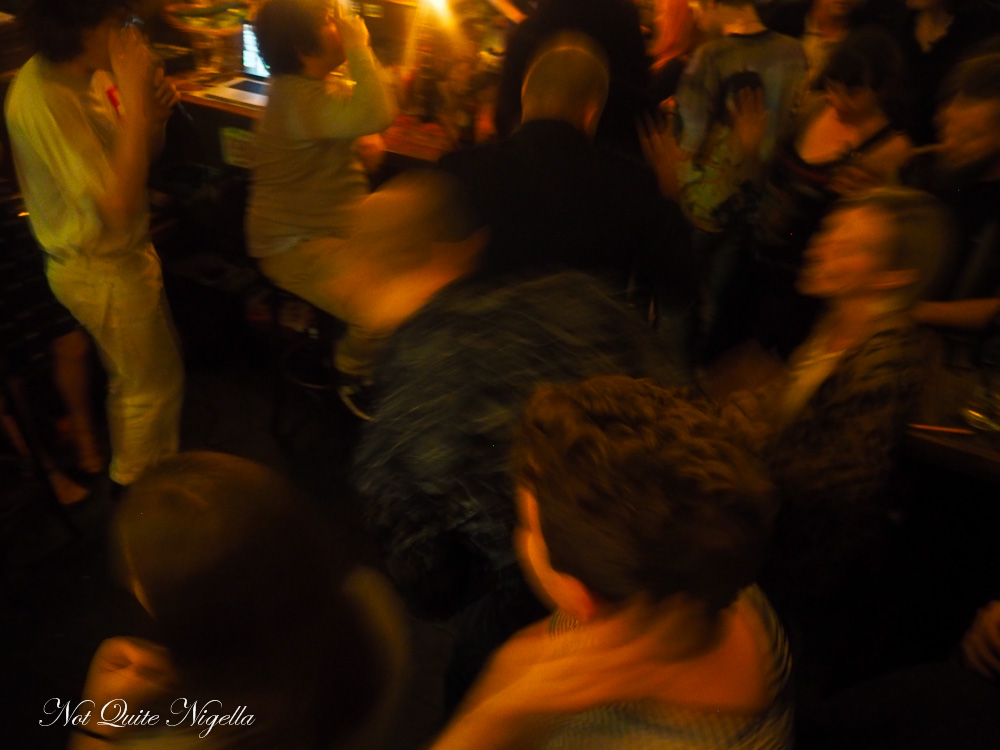 This tour was independently paid for