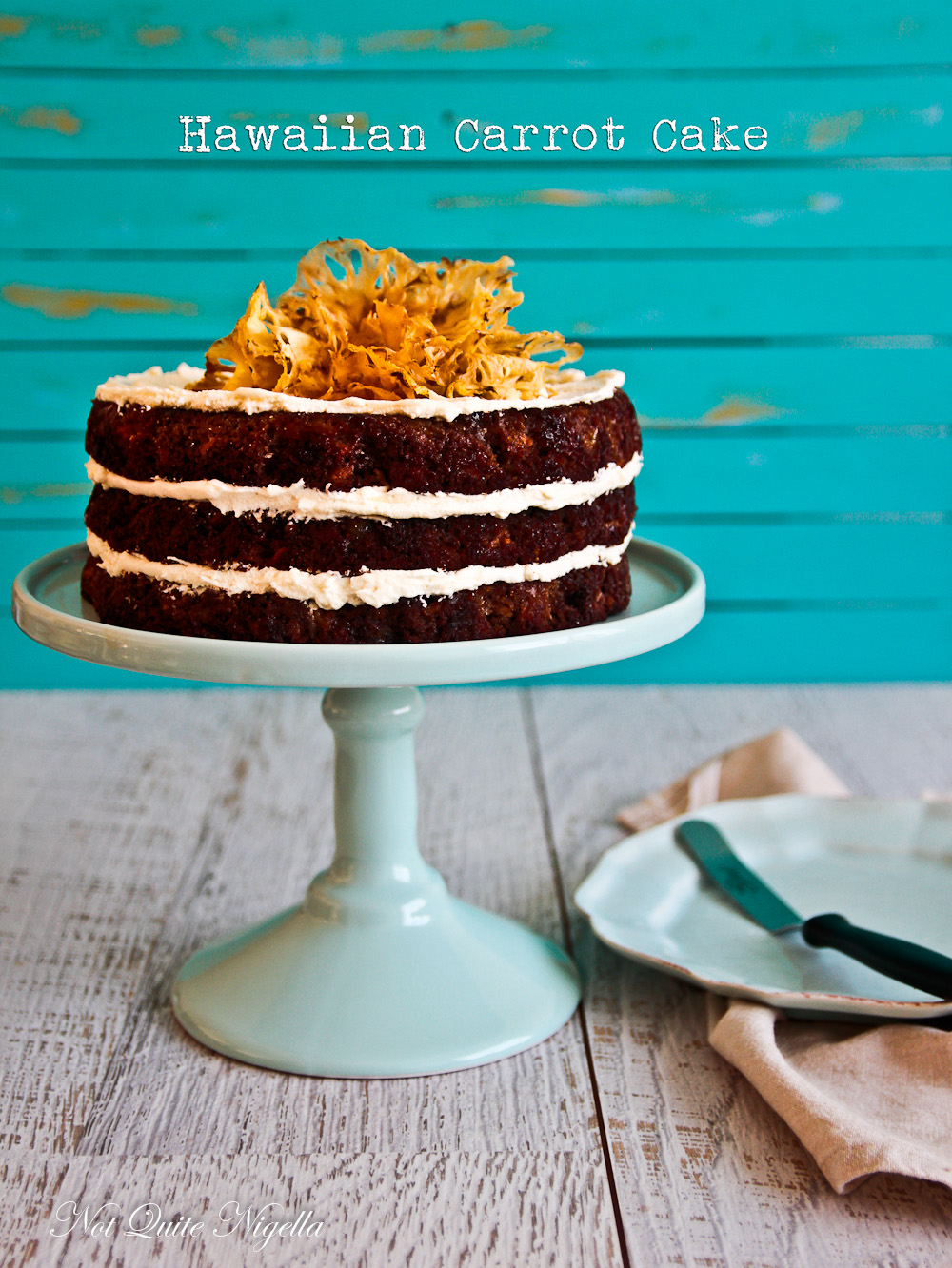 Hello! Just a little housekeeping today before the post Dear Reader! I just wanted to let you know that I am speaking on a panel at the upcoming Melbourne Writer's Festival. I'll be on a panel titled "Crowdsourced Criticism" on the 23rd of August at 1pm and "Book Passage" about travel writing at 2pm on the same day!

I'd love to see you there if you can make it and I'm really quite excited that both these sessions are on weekends too because I know how hard weekday ones are to get to!

Dear Reader, once upon a time a few years ago, I decided that I should learn pole dancing. Then I realised how much upper body strength was needed so I segued my enthusiasm for it into something that my friends were getting into, aerobic strip tease. I bought some DVDs from Carmen Electra and when Mr NQN would leave the house I'd practice the moves hoping to surprise him. It took a couple of months but one day I decided to surprise him.

How do I put this delicately? Well Mr NQN couldn't stop laughing. Huffily, I stormed off muttering that I hated him and sulked for a while afterwards. After that I vowed that if someone were to surprise me with something then I would at least smile and nod enthusiastically so as not to crush their feelings. 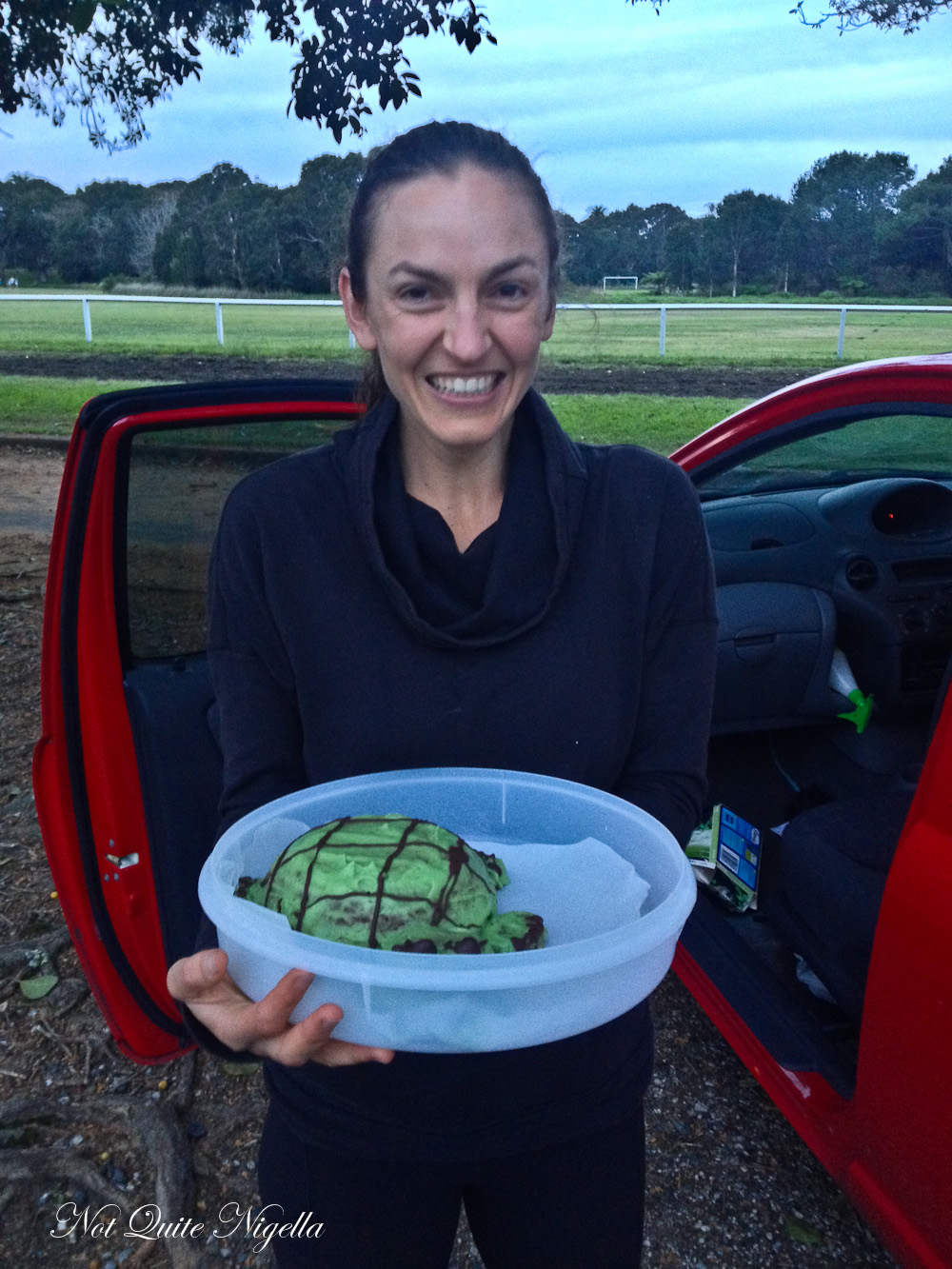 Nina and the turtle cake

A few weeks back my trainer Nina offered to make me a birthday cake. It's a long story but I requested a turtle cake, not expecting that she would make me one. But her boyfriend Garth encouraged her to make it for me and one day she recounted the horror or making the cake during my whole workout session. She had brought the cake along which she promised to reveal to me at the end of the session.

I said to myself "Don't laugh at it!" and when we finished she brought the cake over to me. It was so sweet and there was no reason to worry. I wouldn't have laughed and it looked like a turtle! I'm amazed that a first time cake baker could do something so complicated as a 3D animal cake! 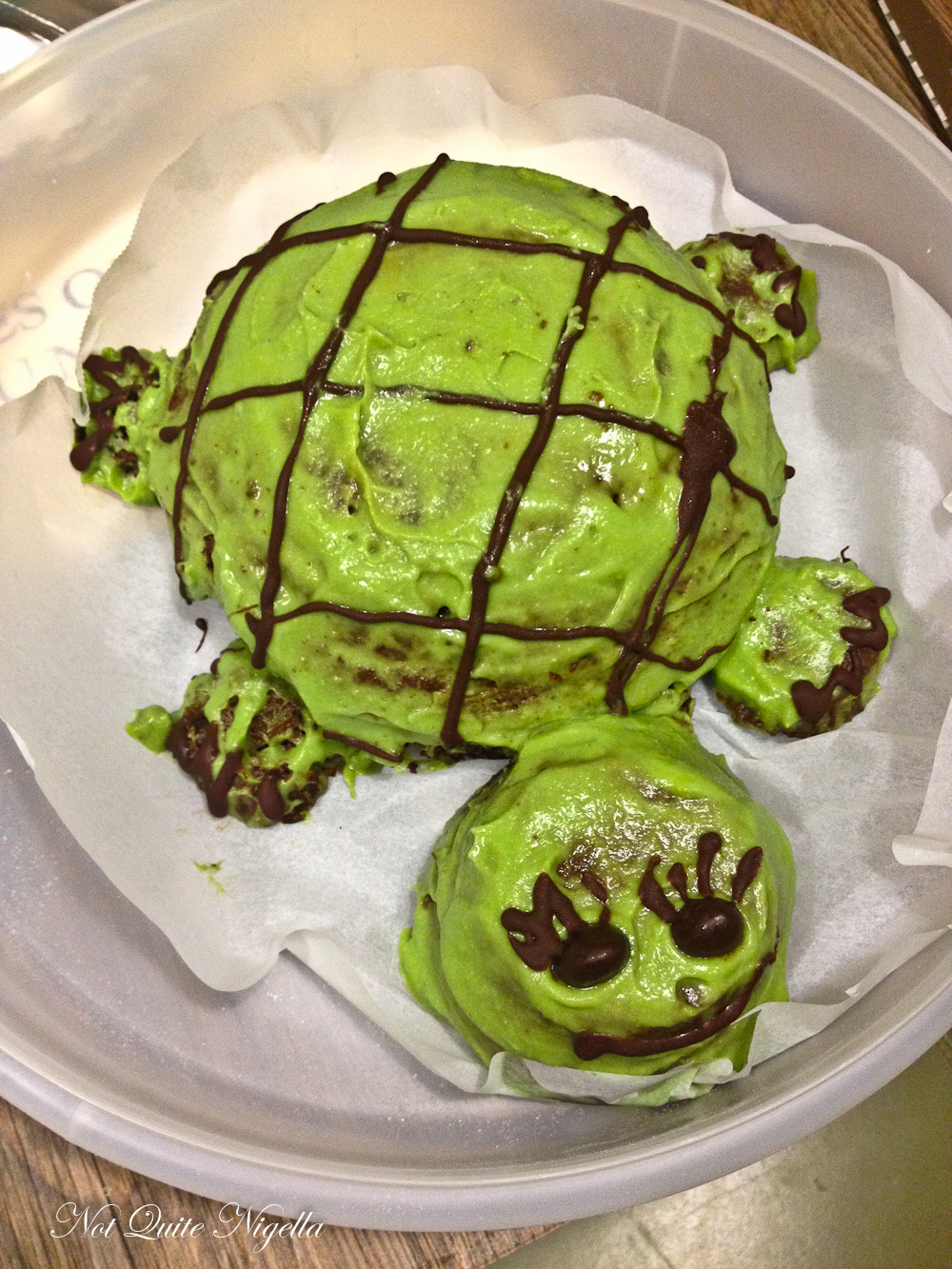 In return I baked her a cake. Her only request was that it be gluten free and not too high in sugar. I decided to recreate a cake I'd had in Hawaii which was a Hawaiian carrot cake. It's just like a regular carrot cake but with pineapple, macadamias and ginger added in. I also used coconut oil for flavour but also because that is what Nina eats. 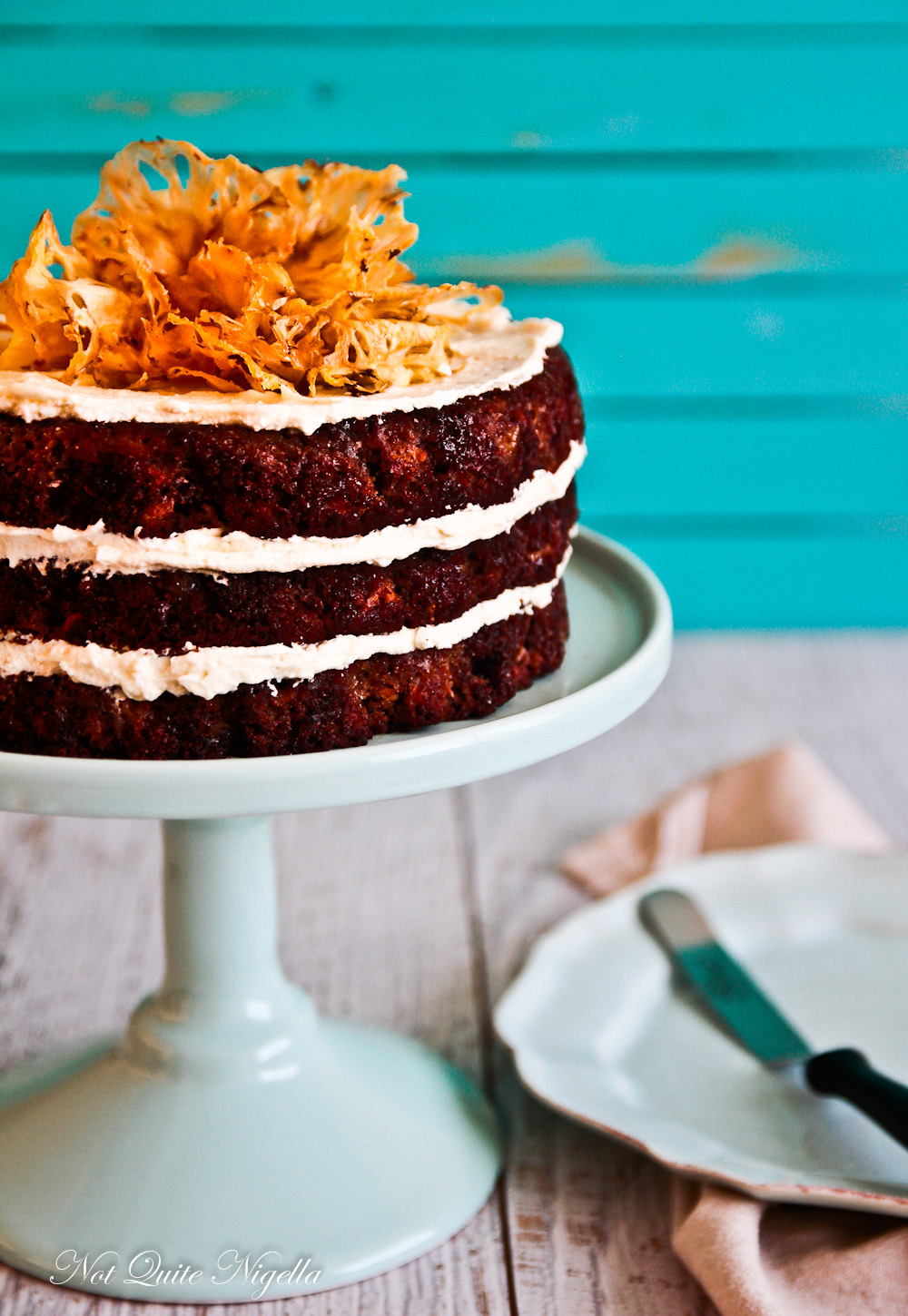 The silky cream cheese frosting was an experiment. The frosting I had in Hawaii was beautifully smooth and there was no graininess to it at all from the icing sugar. That made me think of Swiss Meringue Buttercream and making a version using cream cheese. Well blow me down with a feather but it was amazingly good and not hard at all. Silky smooth it had just a fraction of the sugar that a normal cream cheese icing has (half a cup compared to four cups). I will be using this method instead of the simple icing sugar and cream cheese method because the finish on the icing is superb. And if you are as big a fan as I am of icing, I urge you to try and make this frosting because it is divine! And I also provide a tutorial on how to make pineapple flowers as they're such a pretty way to dress up a cake and really not that difficult at all.

So tell me Dear Reader, do you have a good "poker" face or would you burst out laughing if someone tried pole dancing in front of you? 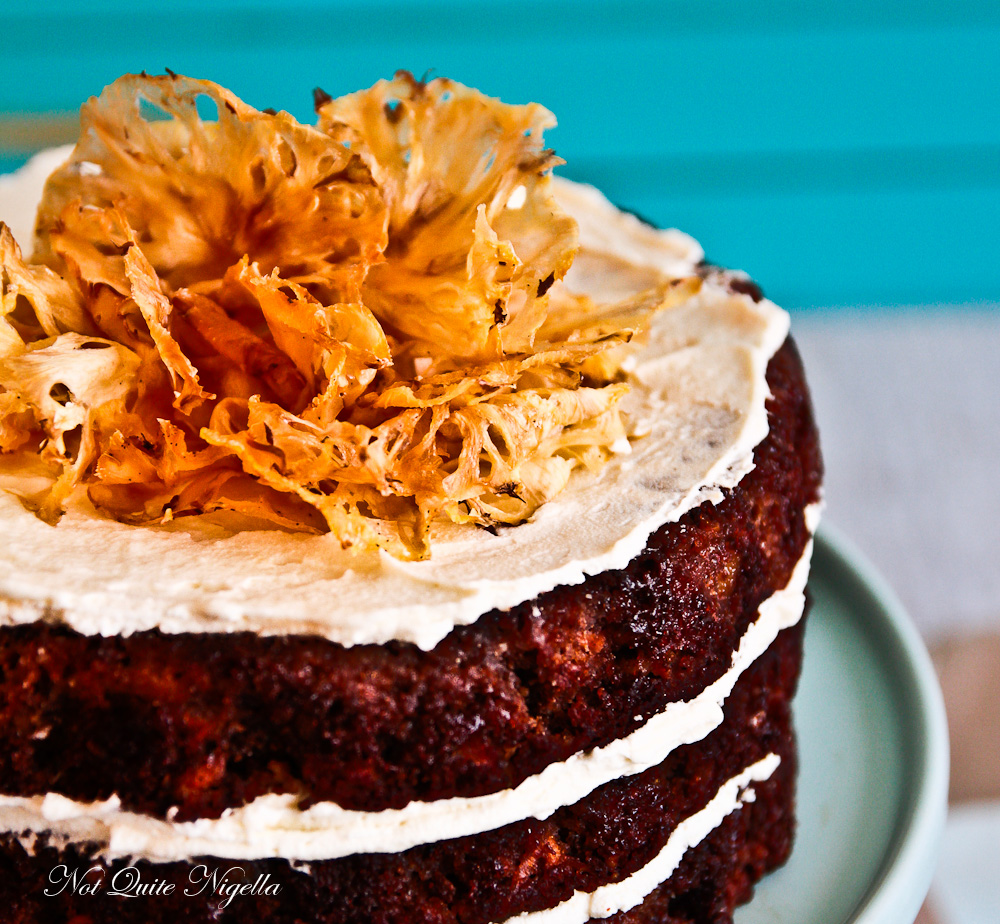 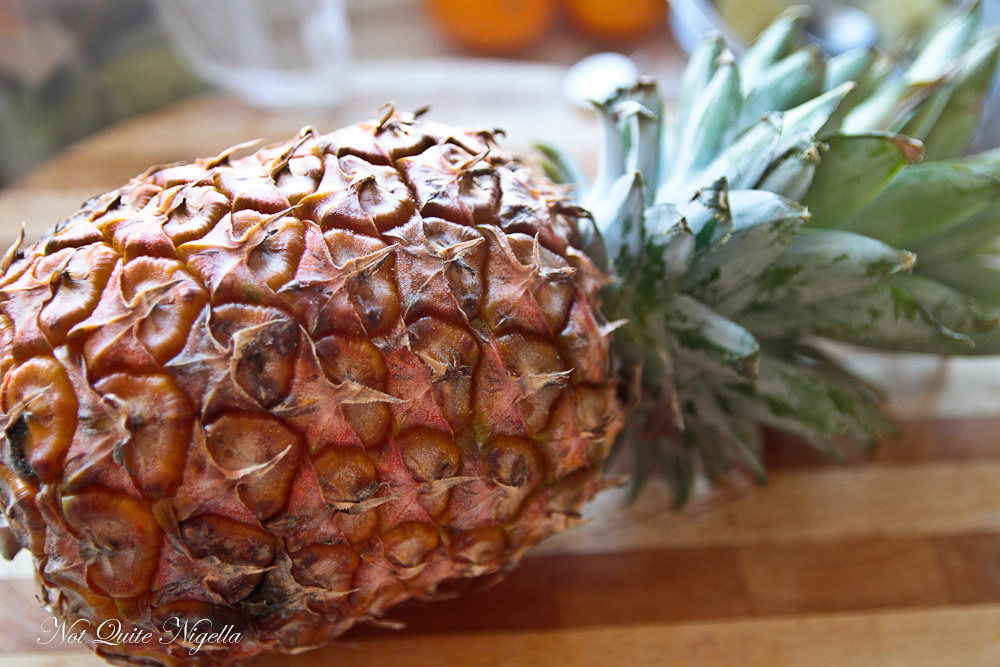 This is a pineapple. But you probably knew that.

Step 1 - Make pineapple flowers first as they take over an hour to dry out. Preheat oven to 100C/212F and take place two cooling racks on top of two baking trays. Simmer the sugar and water together for about 3 minutes until the sugar has dissolved. 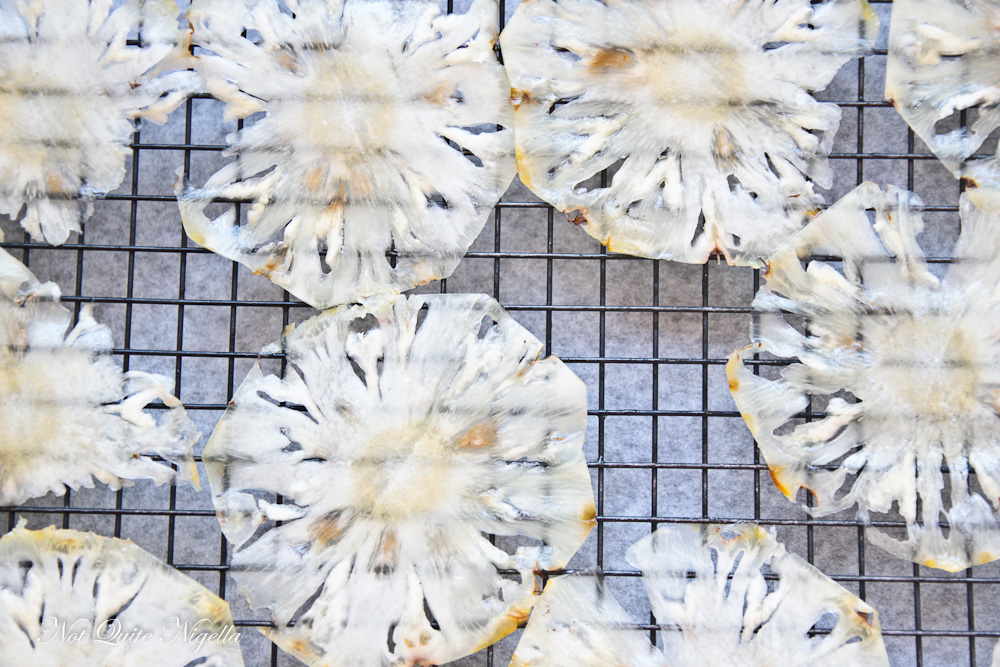 Step 2 - Top and tail the pineapple and remove the skin. Using a mandolin or a very steady hand, slice the pineapple into as thin slices as possible while keeping them a circle. Place on the oven rack and brush with the sugar syrup and bake on low oven for 1 hour or until dried out. Take them out of the oven and shape them into the way you want them to sit as they will dry and set this way. 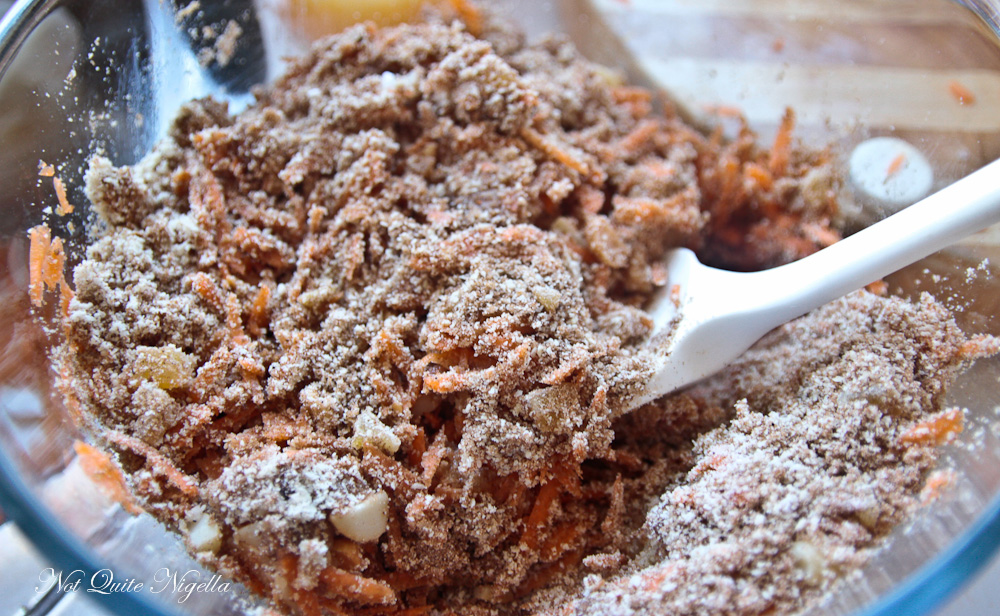 Step 4 - Whisk the coconut oil and eggs together. Add this to the carrot mix along with the pineapple, macadamias and ginger stirring until combined. 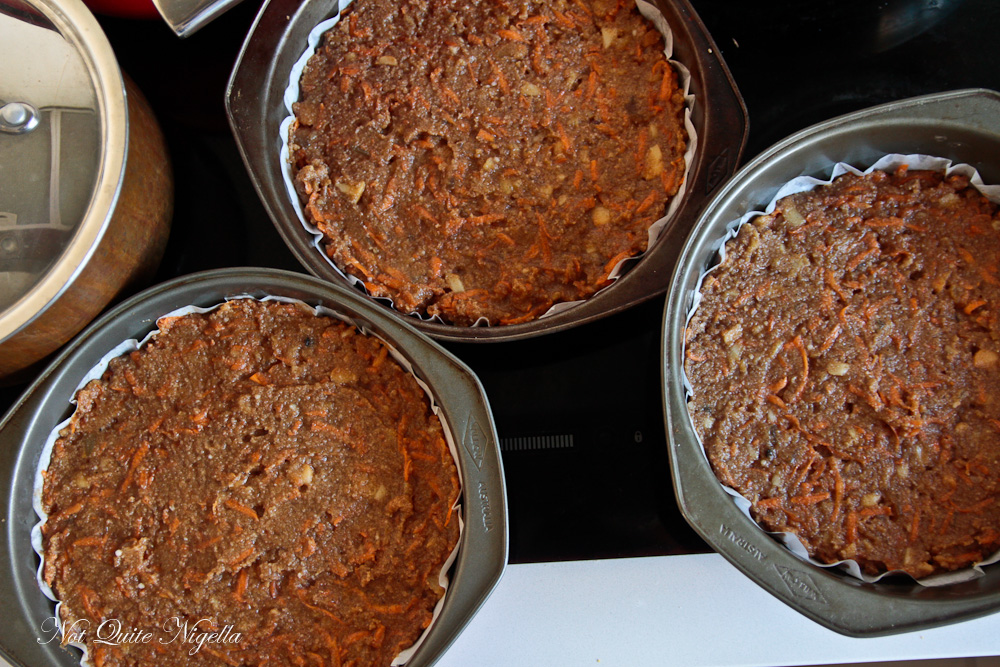 Step 5 - Divide the mixture evenly into three portions. Bake for 25 minutes until baked through until a skewer inserted comes out clean. Cool completely in the tin and wrap in cling film until needed. 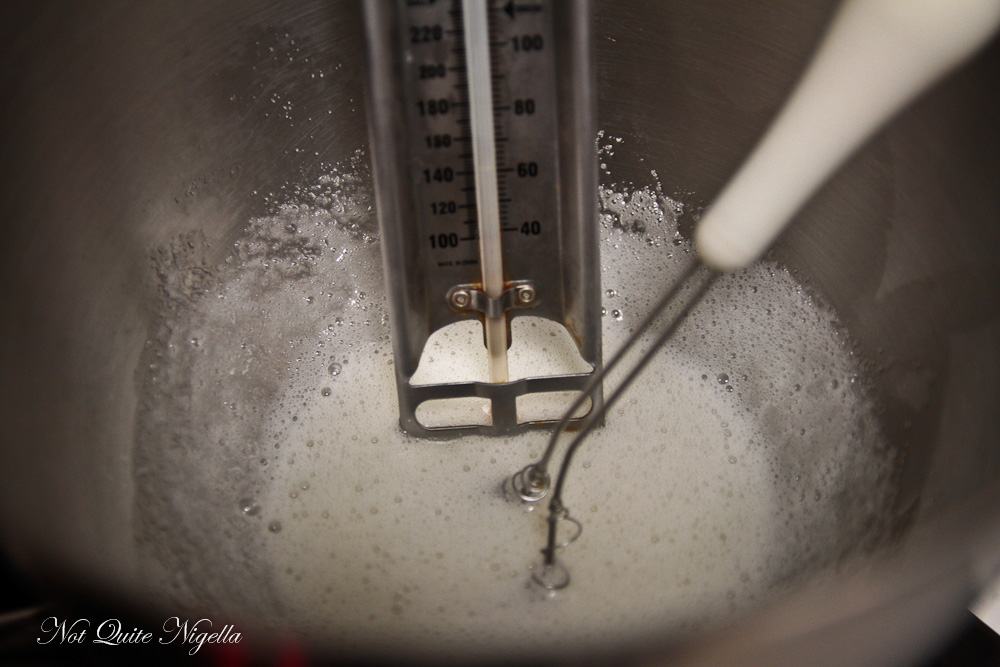 Step 6 - Fit a heatproof bowl over a pot of simmering water - I just use the metal mixer bowl. Add the egg whites and sugar and whisk lightly until it reaches 60C/140F by which stage the sugar should have melted. Remove from heat and attach whisk attachment to mixer and whisk until doubled in volume and stiff peaks form. Add the butter cubes one by one until incorporated. 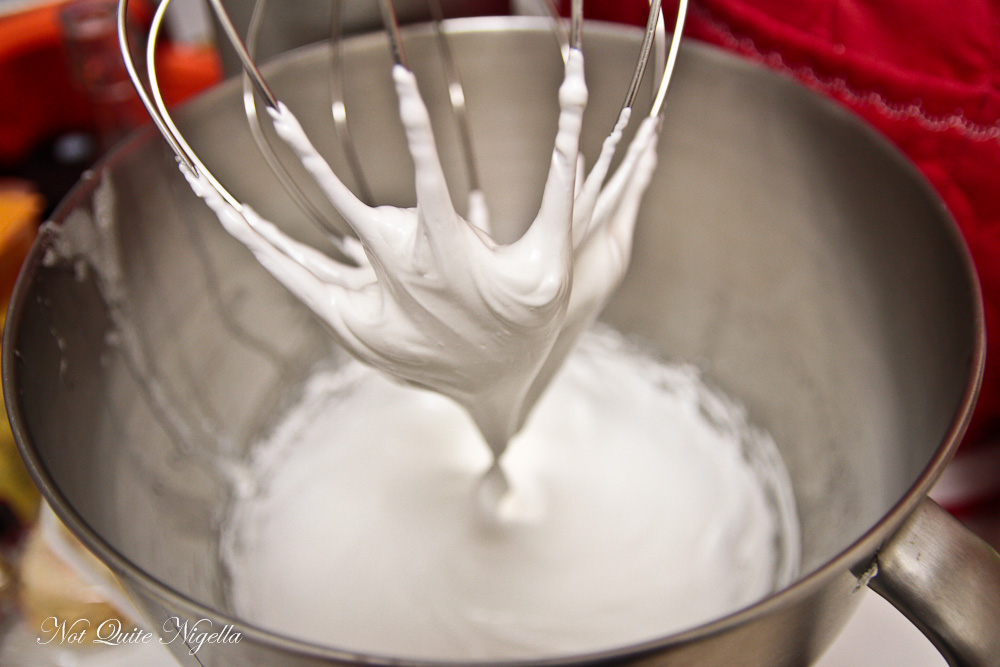 Step 7 - Scrape the mixture into another bowl and set aside. Whisk the cream cheese until soft and then add the egg white and butter mixture as well as the coconut extract and pineapple juice and whip until you get a thick, smooth frosting.

Step 8 - Divide the icing in three portions and spread it between the layers. Top with the pineapple flowers.