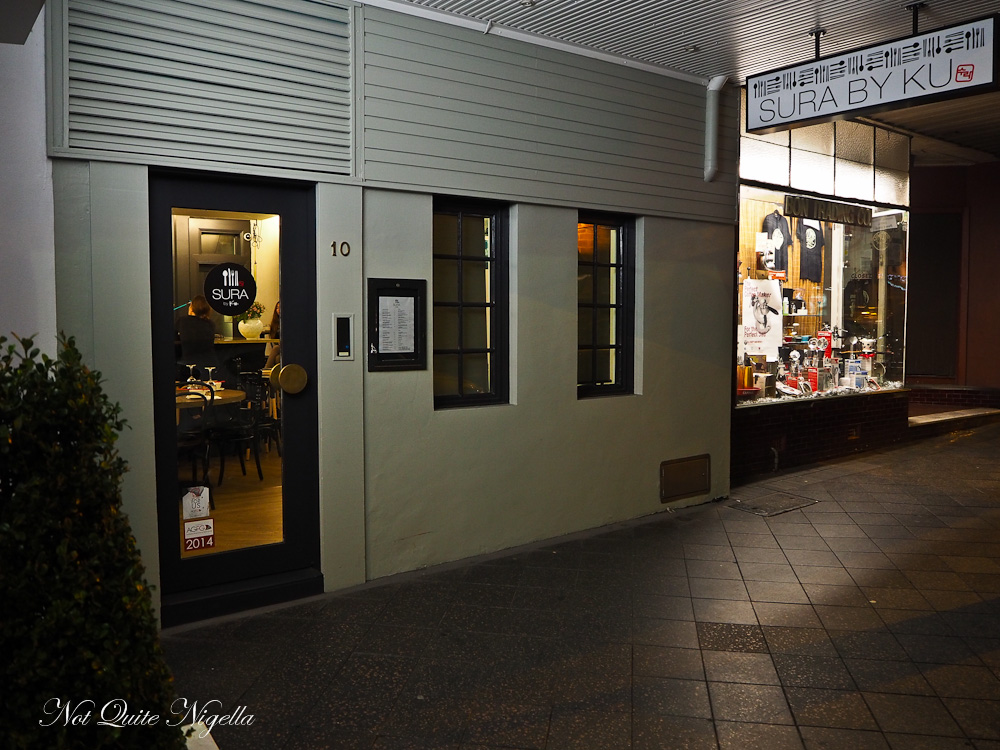 It was a rainy Saturday night. Belinda, Nick Mr NQN and I were sitting at Wine Library in Woollahra having a glass of wine before we adjourned next door to Sura by Ku. We were wondering what our upcoming meal would be like. "They confirmed with me twice," Belinda said and she pointed out the website where there wasn't even a menu. I felt slightly nervous - that feeling that you get when you suggest a new place and bring friends along. 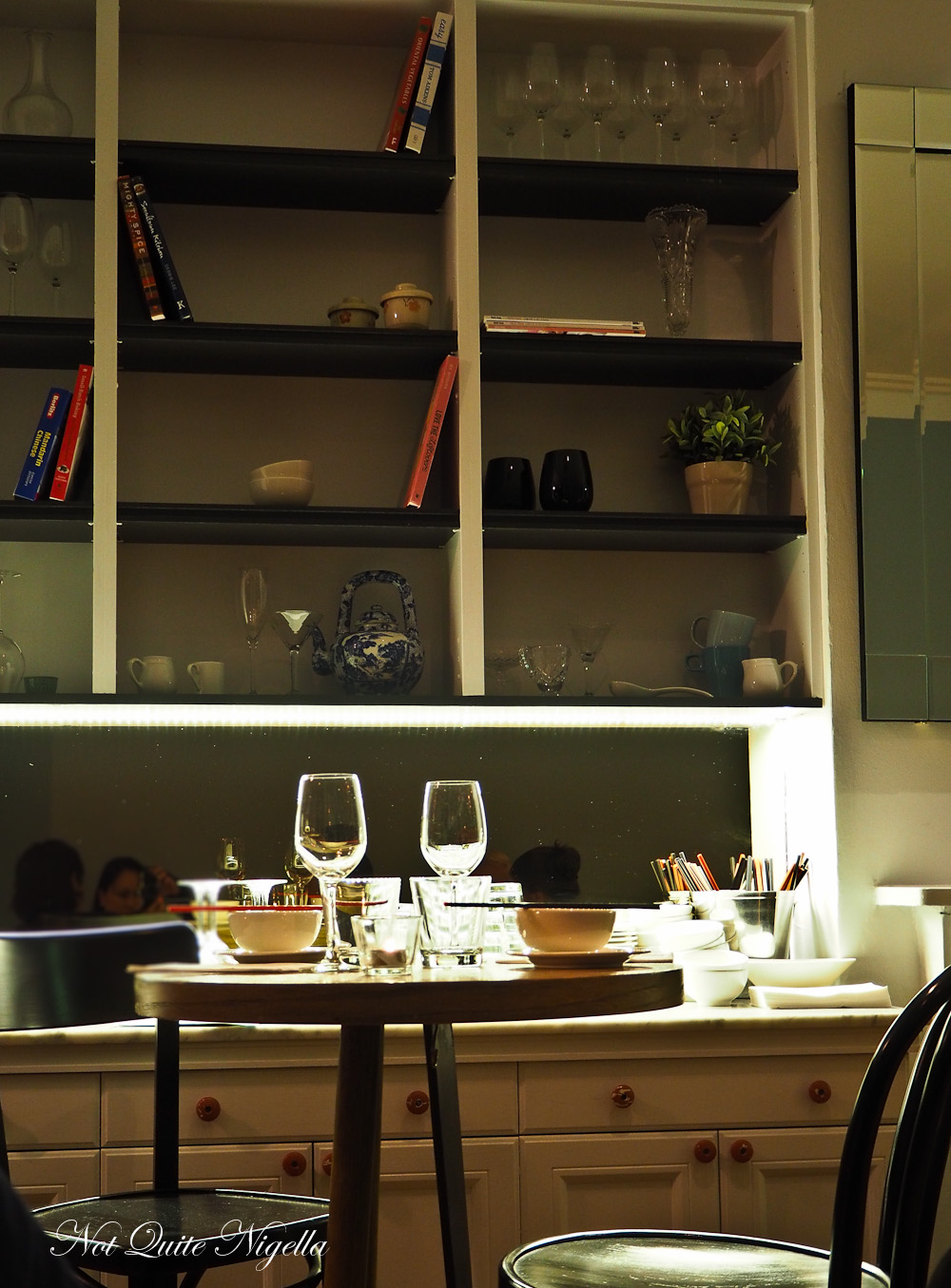 Sura by Ku is located at the former location of Claude's. Up until a month ago, it was run as Red Rabbit, a Chinese restaurant. Now it has been given a new life as Sura by Ku - Sura is the type of cuisine that was served to royalty in Korea while Ku is Sangkyu Ku, chef formerly of Bennelong by Guillaume and Bird, Cow Fish. His wife and partner Julie Kwon runs the floor.

Teri and Ceri are already waiting for us upstairs and we climb the narrow wooden stairs to our table. Sura by Ku has been open for four weeks and it's relatively quiet upstairs on this Saturday night with just one table of four. Music is soothing and the room is decked out in light pastels including a light blue wall in a distinctive Korean jade blue. 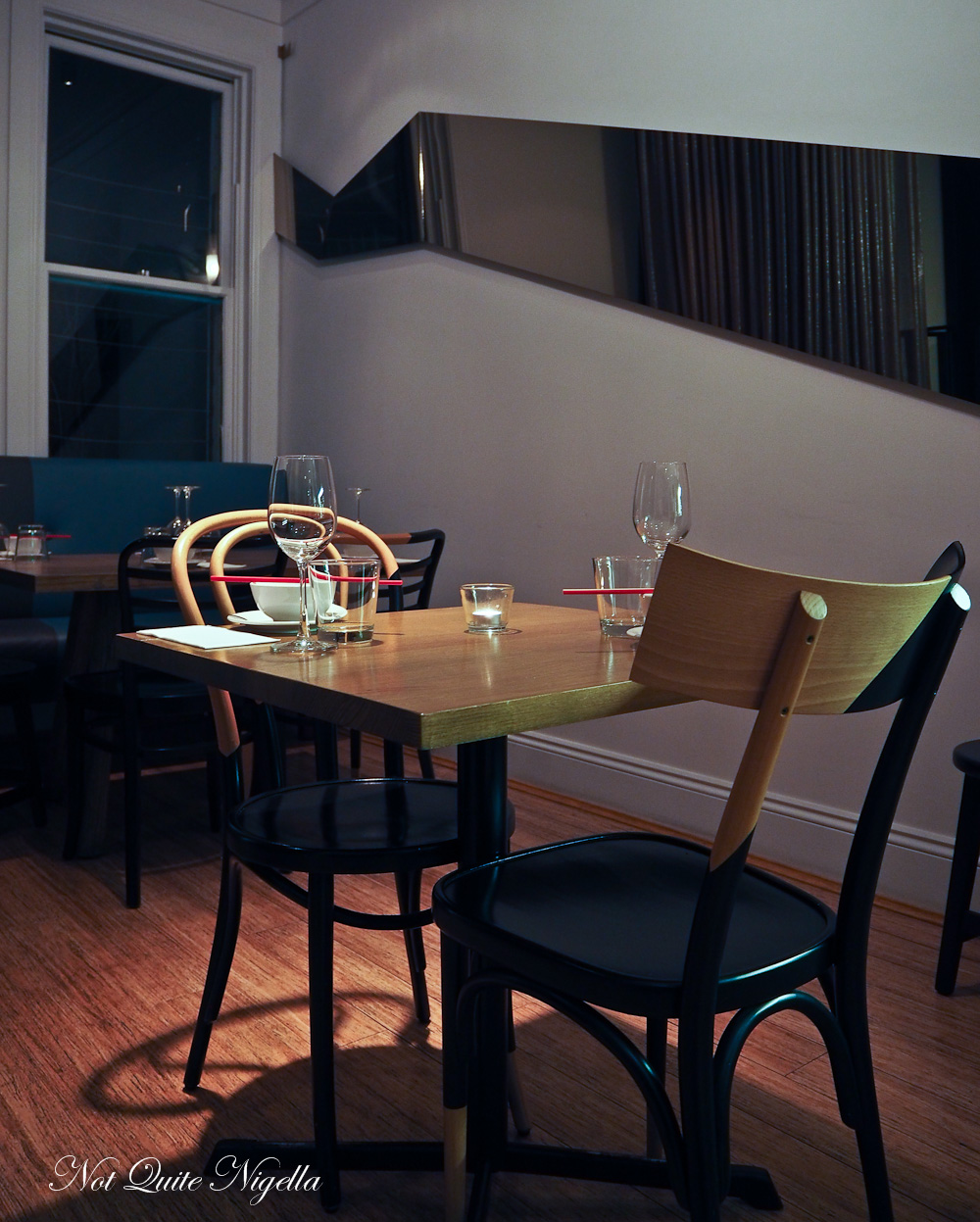 The menu features four sections: vegetarian,small plates, plates and sides with desserts on a separate menu. I ask for recommendations as it is hard to narrow things down. Nick swings into action, his antennae honing in on the attractive waitstaff. "I'm a Korean connoisseur," he says. We bury our heads in our hands. 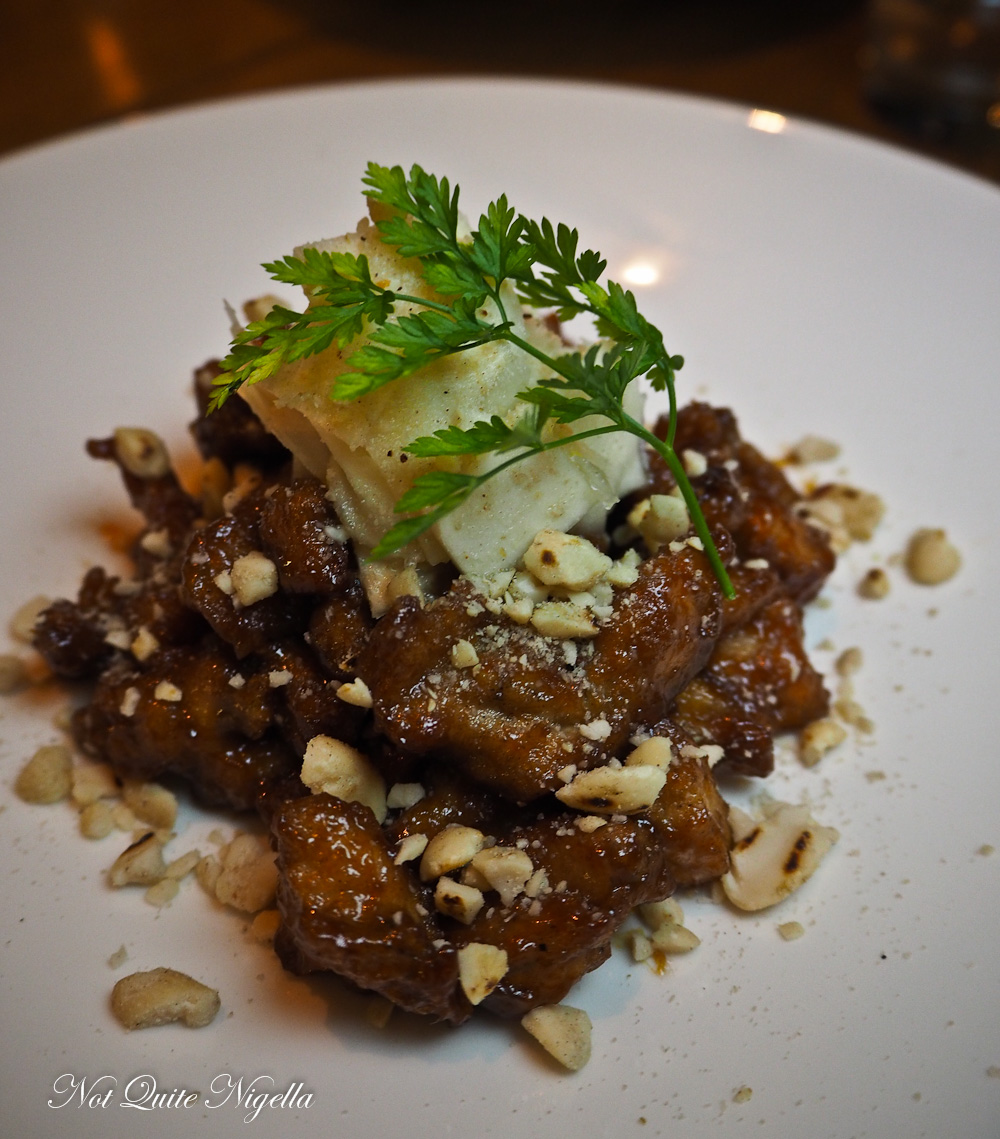 Dishes are meant to be shared as they don't come out in order. The food arrives fairly quickly and the first bite to hit the table is one of the small plates. The chicken gangkeong is made up of small bite sized pieces of chicken bathed in an intense, sweet garlic soy sauce and topped with shaved Jerusalem artichoke and crushed peanuts. It's sweet, tasty and moreish. 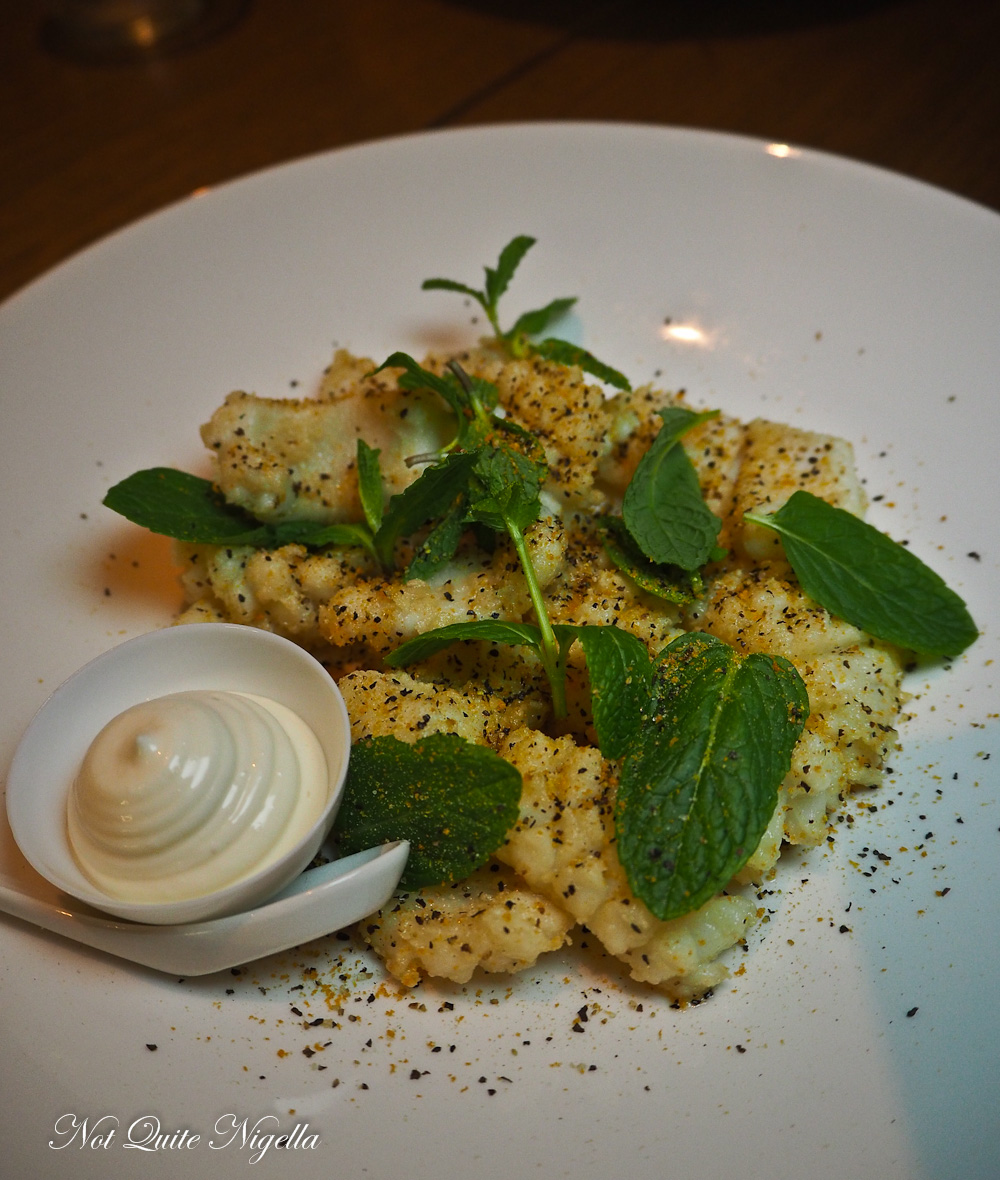 Initially we had dismissed the lemon pepper squid thinking that fried squid is such a common dish here but it was recommended to us. We are glad that we try it as the squid is incredibly tender and creamy. You pick up a piece of squid and then a mint leaf and dip it in the aioli and the whole thing melts in the mouth with a lemon peppery burst. Nick loves this dish so much that he says, "Tell the chef that I've never had it this good!". 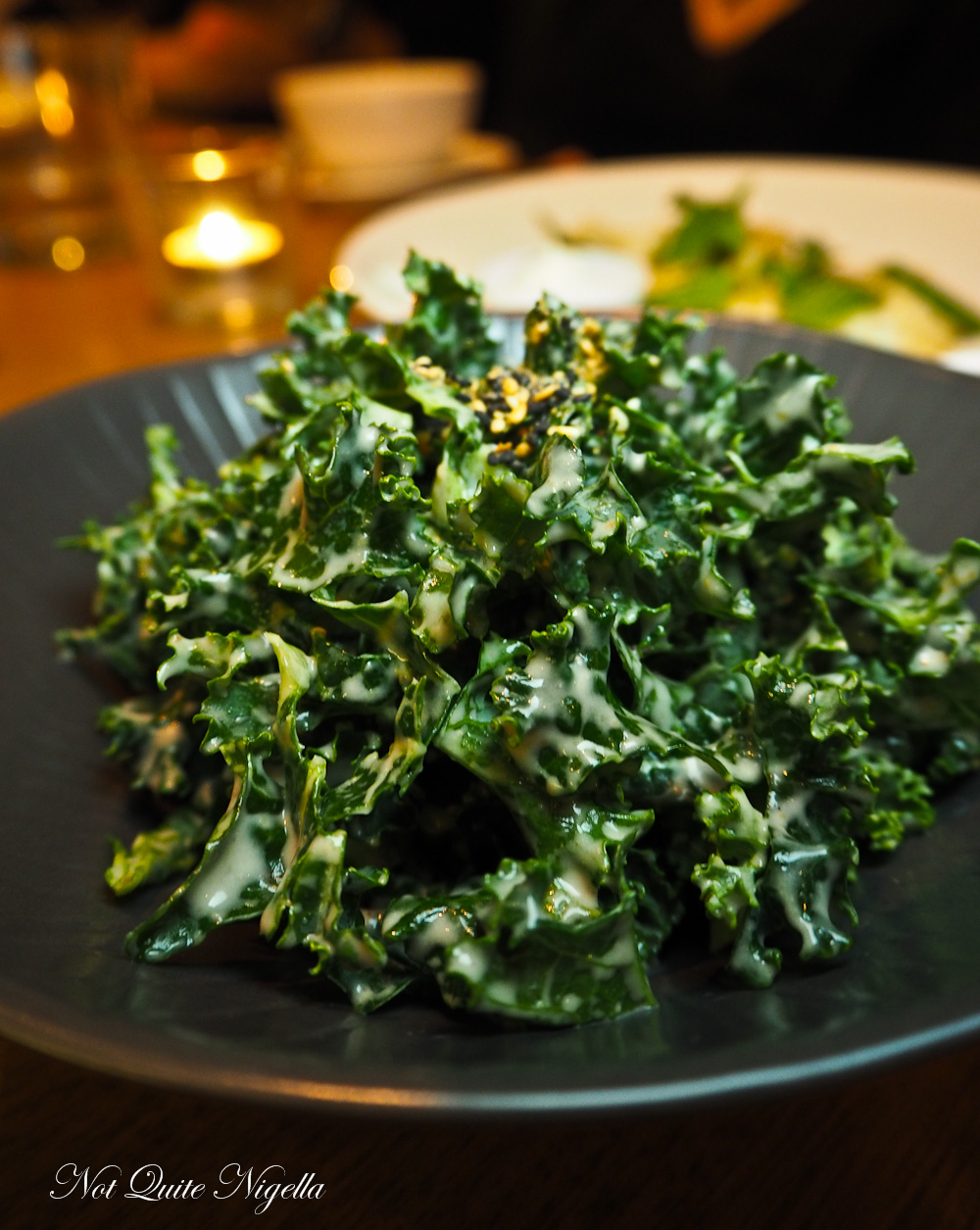 The kale salad is fresh and dressed simply with a creamy gomadare sesame dressing that we all love. It's a nice balance of rich sesame and virtuous greens. 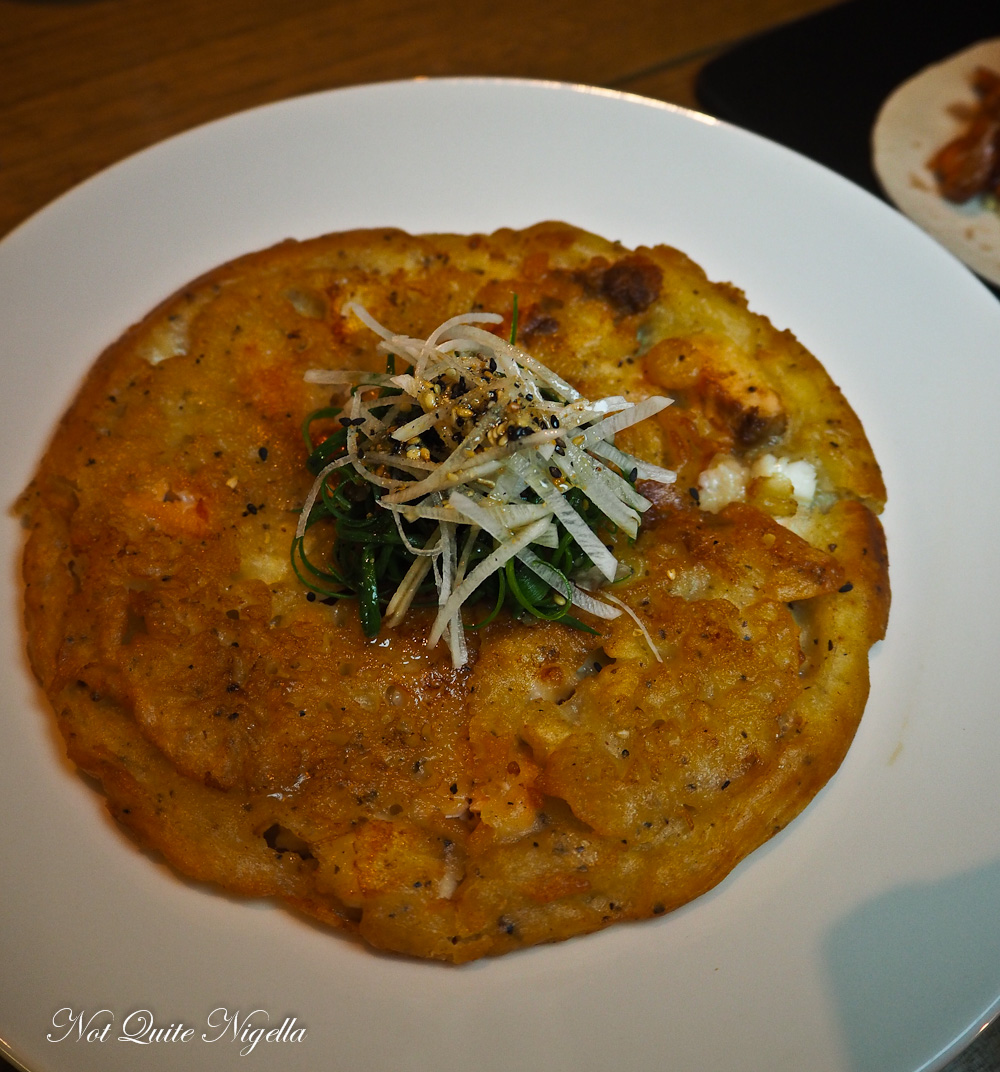 The seafood pancake is beautifully crispy and filled with plenty of seafood including salmon and prawns. The batter is light and the pancake is topped with a shallot, white radish and sesame seed salad on top. 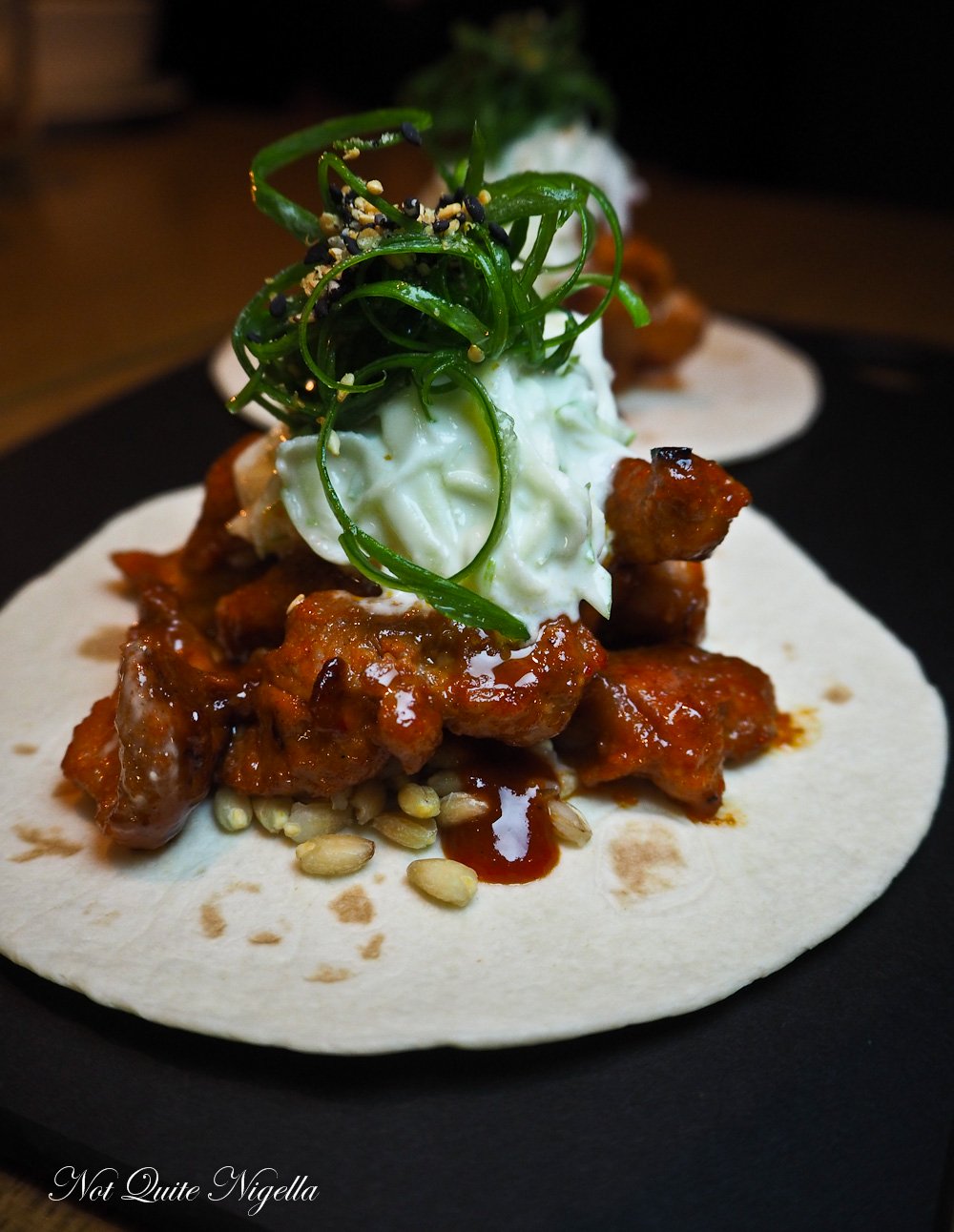 The next item is perhaps one of my favourite dishes of the night. The gochujang pork belly taco is a small flour tortilla topped with saucy, rich pork belly and a creamy apple daikon slaw and barley. It's a big hit of flavour and texture in one from the spicy gochujang paste to the melting pork belly and creamy slaw. The barley isn't really needed as there are plenty of sensations but it's the kind of course that you really want to order one per person because you may not want to share. 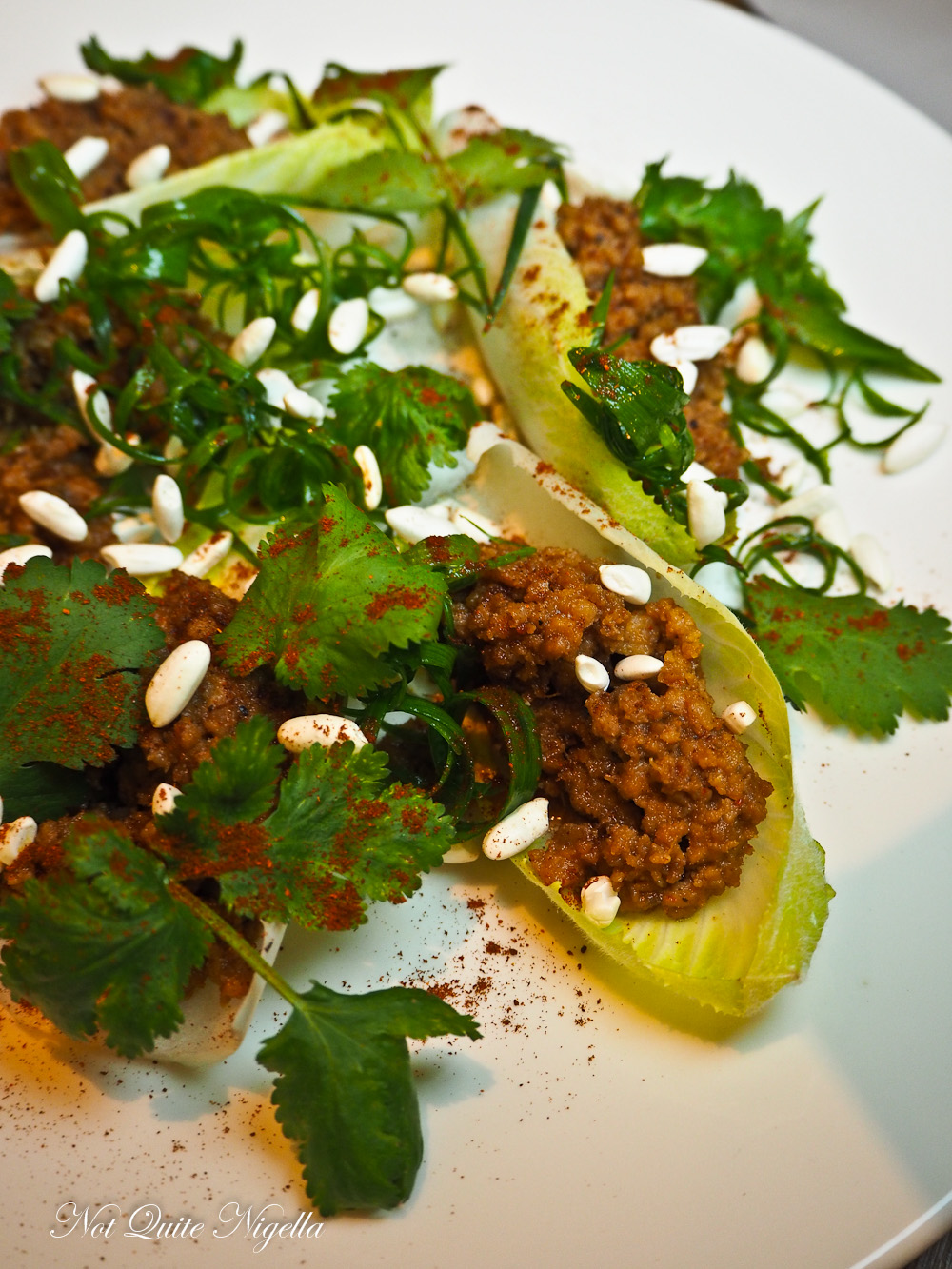 This leads us onto another favourite for the table. You know when something is good when the other end of the table murmur blissfully. The menu describes it as sticky pork but it's not really sticky, it's a pork mince served on a witlof leaf and sprinkled with rice puffs. The pork mince is full of flavour and the bitter leaf offsets the richness of the flavour. 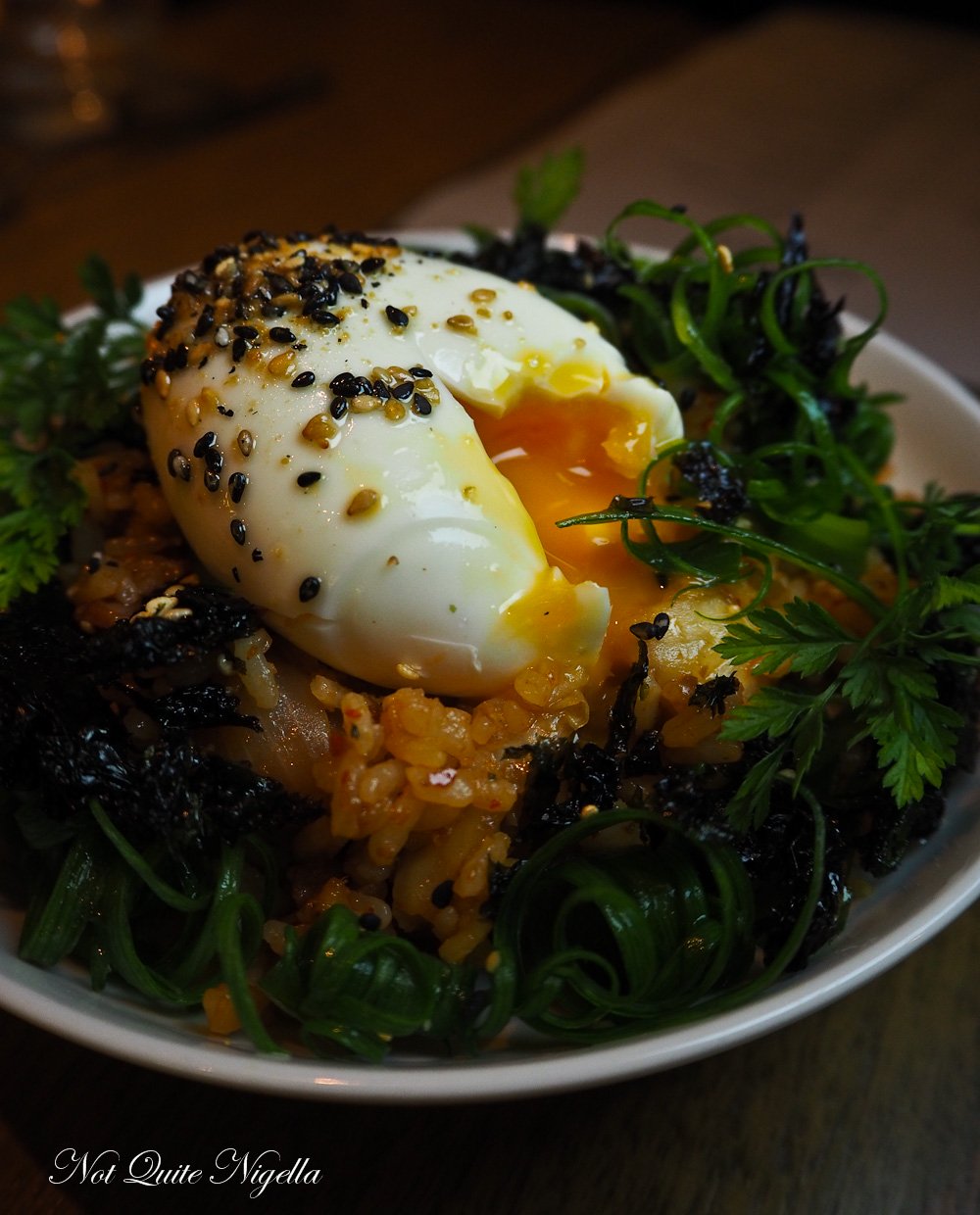 Most of us love kimchi fried rice so it was something that we all wanted to order. Here it is filled with Lup Cheong, folds of kim chi pickled cabbage and topped with candied laver seaweed and a soft poached egg with a gloriously runny yolk centre. It's a small bowl but given how much we've ordered it's just right to get a taste of it for the six of us. 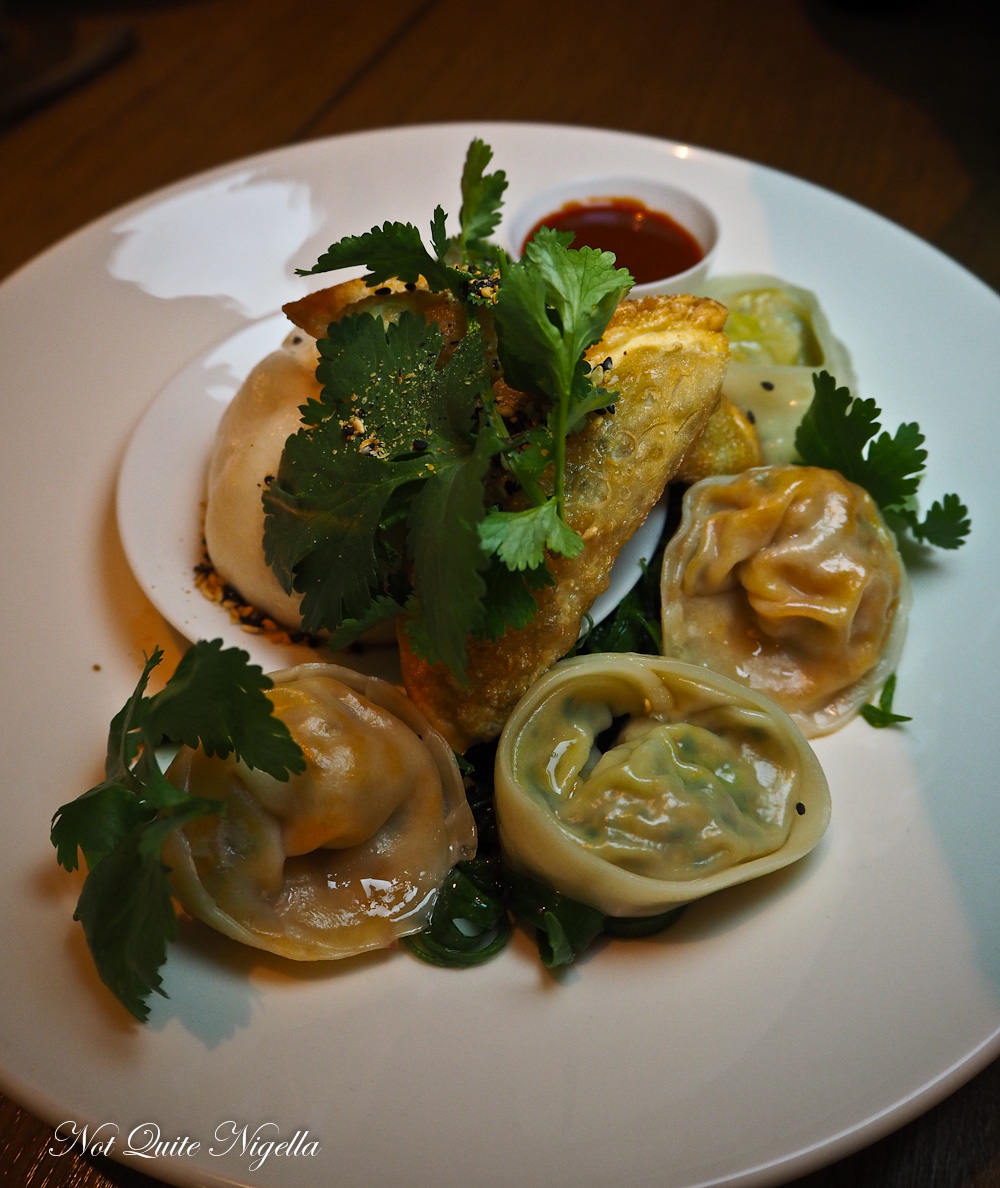 Nick asks if they have japchae (noodles) and Julie explains that they have japchae in one of the dumplings on the vegetarian menu so curious, we order the dumpling plate. It comes out as one large steamed bun filled with jap chae sesame noodles, a kimchi dumpling, a vegetable bun and a deep fried tofu dumpling and a great chilli sauce. There's plenty of flavours and textures going on with these house made dumplings. 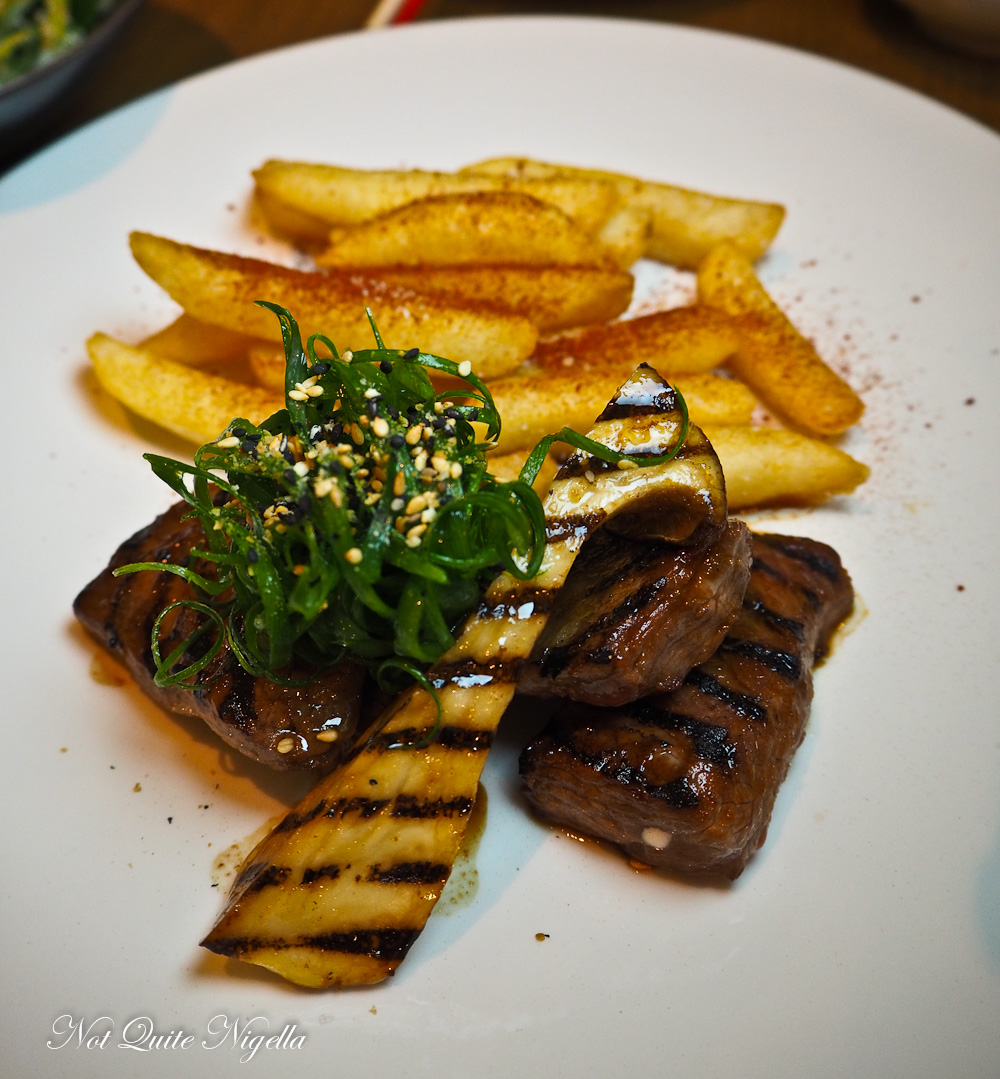 The Korean BBQ flank steak comes out as four slices of steak topped with a grilled king oyster mushroom. The beef is good and goes well with the mushroom and potato chips sprinkled with smoked chilli but it's not quite as wowing as the rest of the courses. 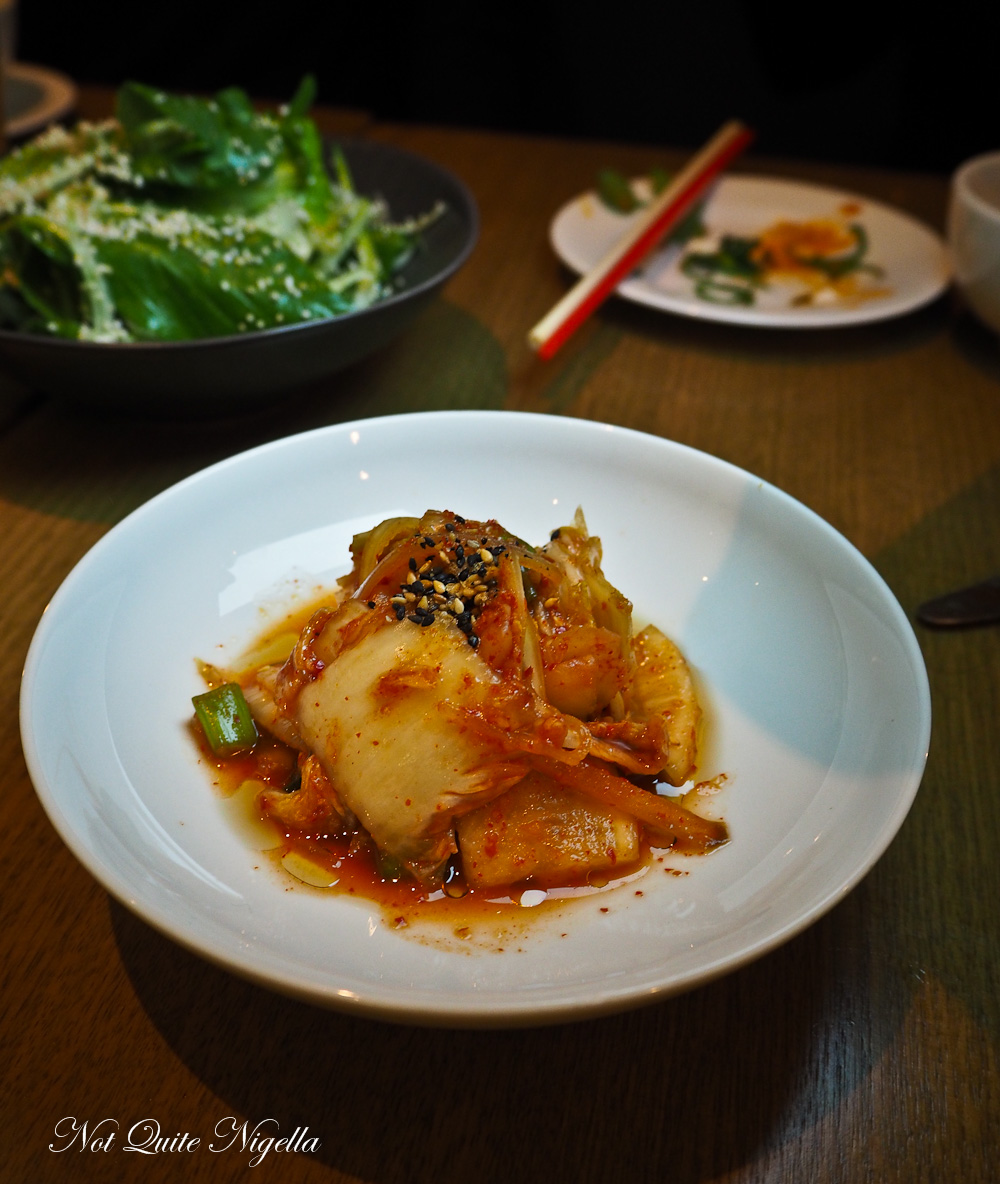 The kimchi packs a mild punch-it's not quite as feisty as others but it's still very good. Ceri tries kimchi for the first time and is less convinced about it but is glad that she tried it. 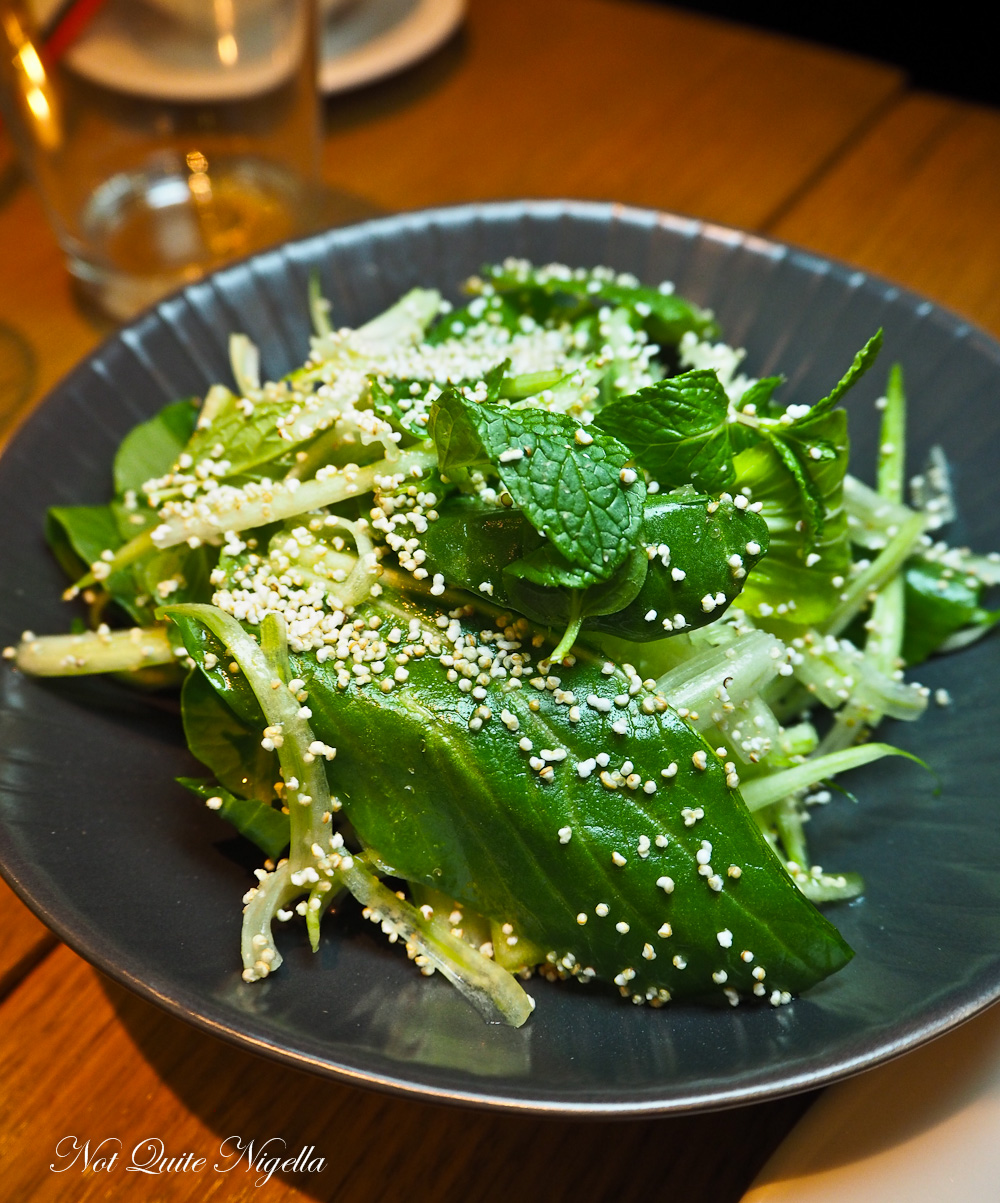 Teri in particular loves the bok choy salad made up with finely sliced raw bok choy and dressed with a mint, lime and shallot vinaigrette and topped with amaranth seeds. It's refreshing and a good foil for the rich beef and spicy kim chi.

Dessert time rolls around and it's an easy decision for us - one of each of the five desserts please! Ceri notes that all of the dessert options reference a different part of the world-yuzu and matcha from Japan, Earl Grey tea from Britain and deep fried Mars Bars from...Scotland? 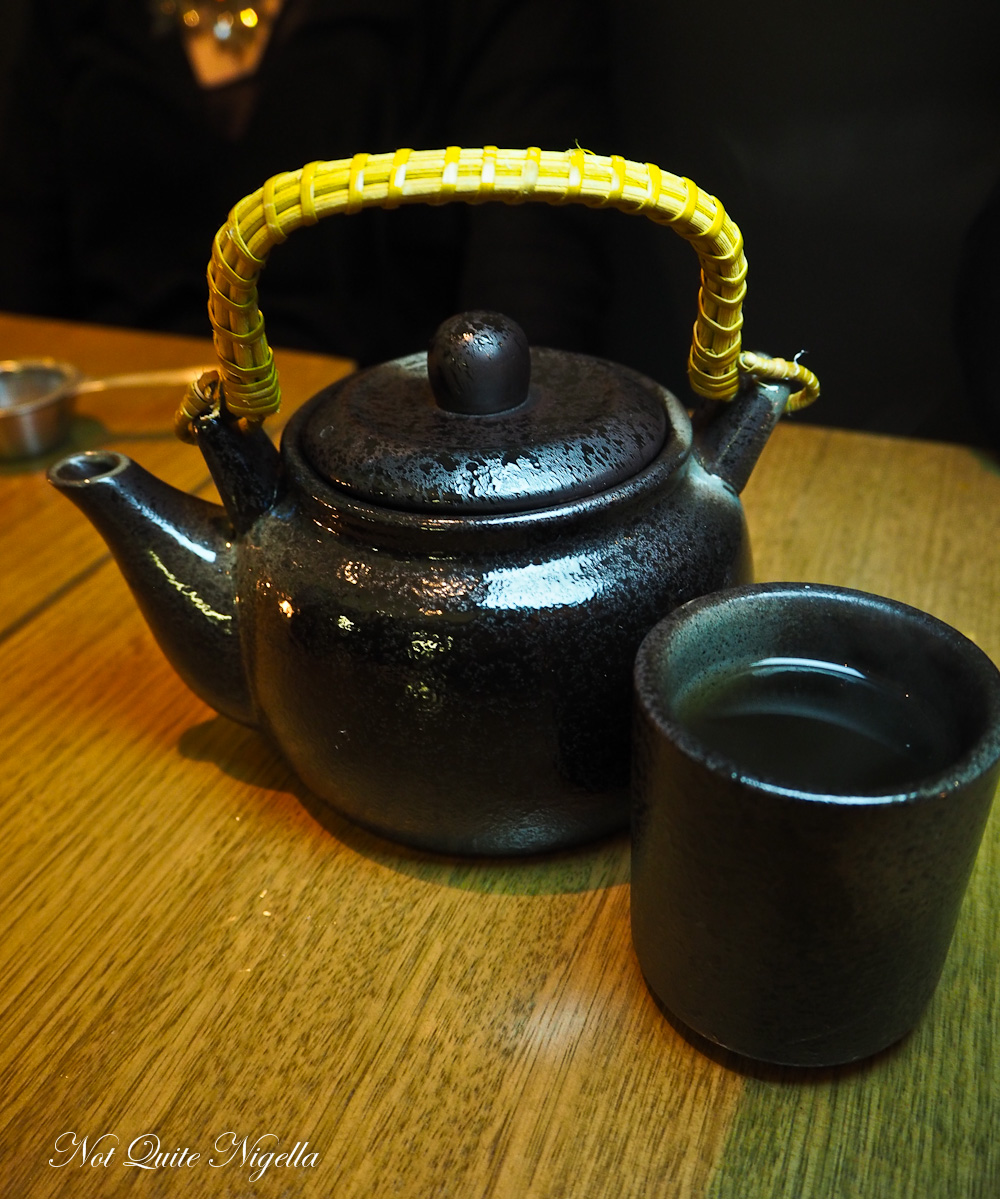 Belinda orders a honey date tea and it comes in a teapot with enough to serve all six of us. It's beautifully sweet and warming with small fragments of honey soaked dates in it. 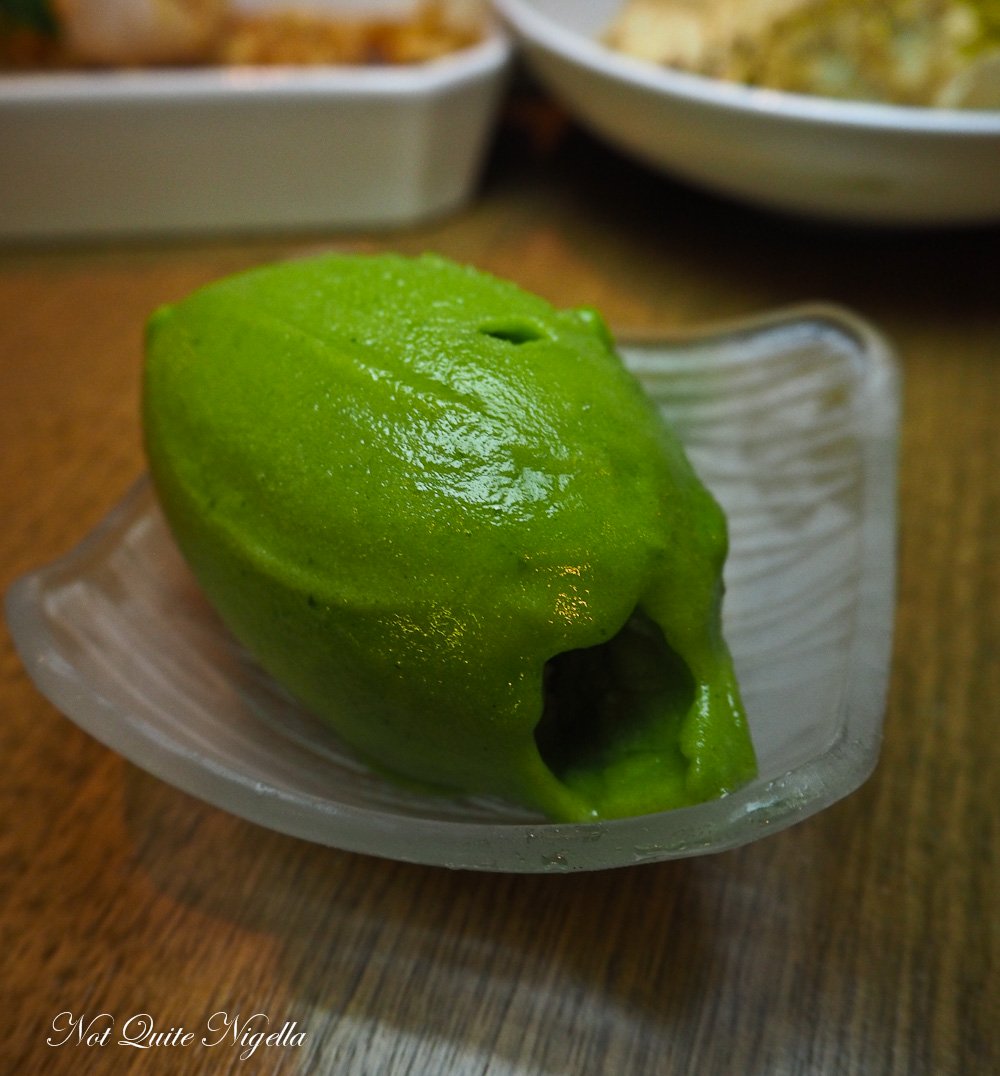 We assume the position of a dessert carousel tasting one dessert and then passing it along. The cucumber and mint sorbet is a delicious surprise. Absolutely refreshing and smooth it's one of my favourite desserts even when compared to the more complex ones due to its refreshing simplicity. 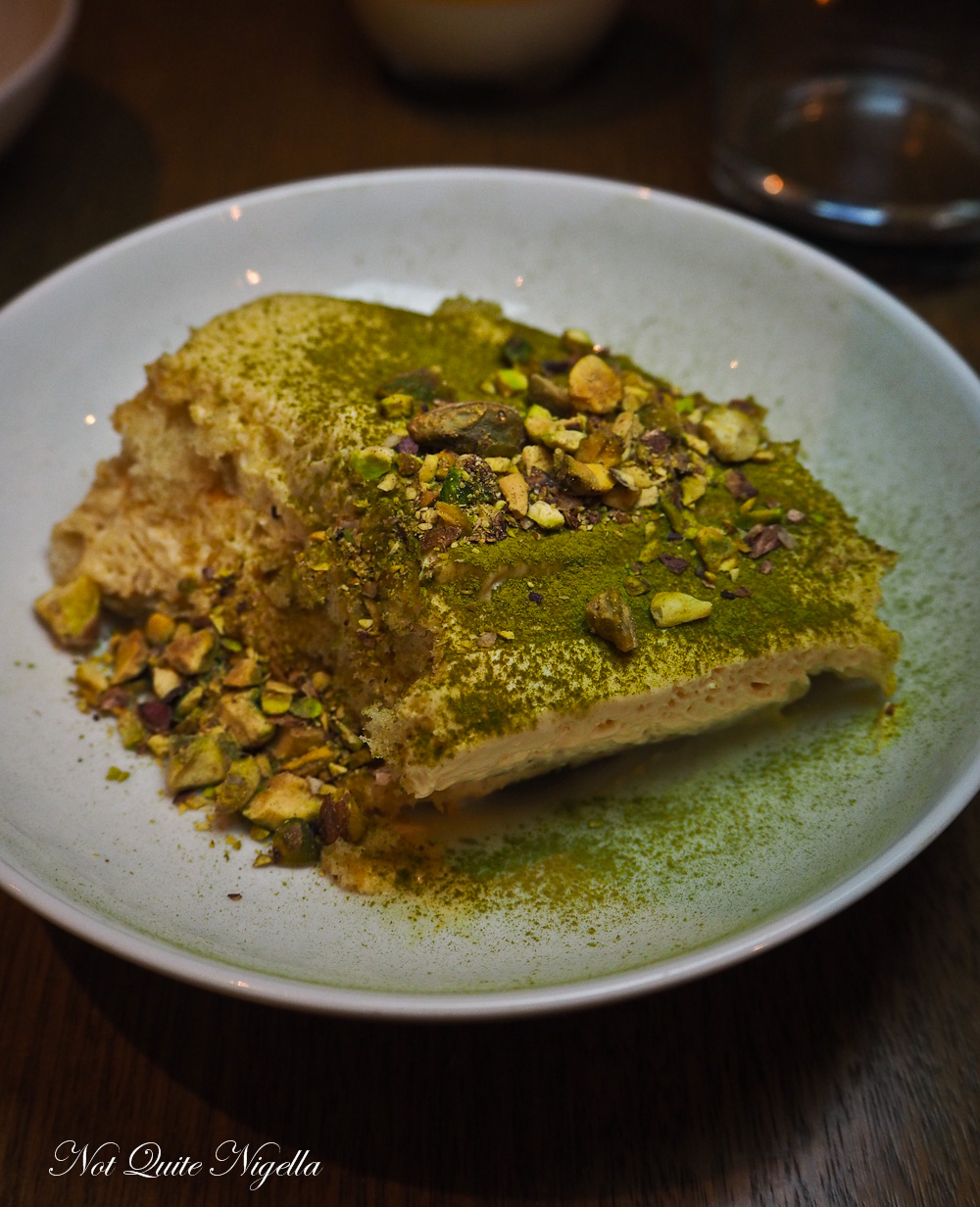 Ethereally light, the matcha or green tea tiramisu is all about feather weight textures, weighed down only by the nutty rubble of roasted pistachios on top. 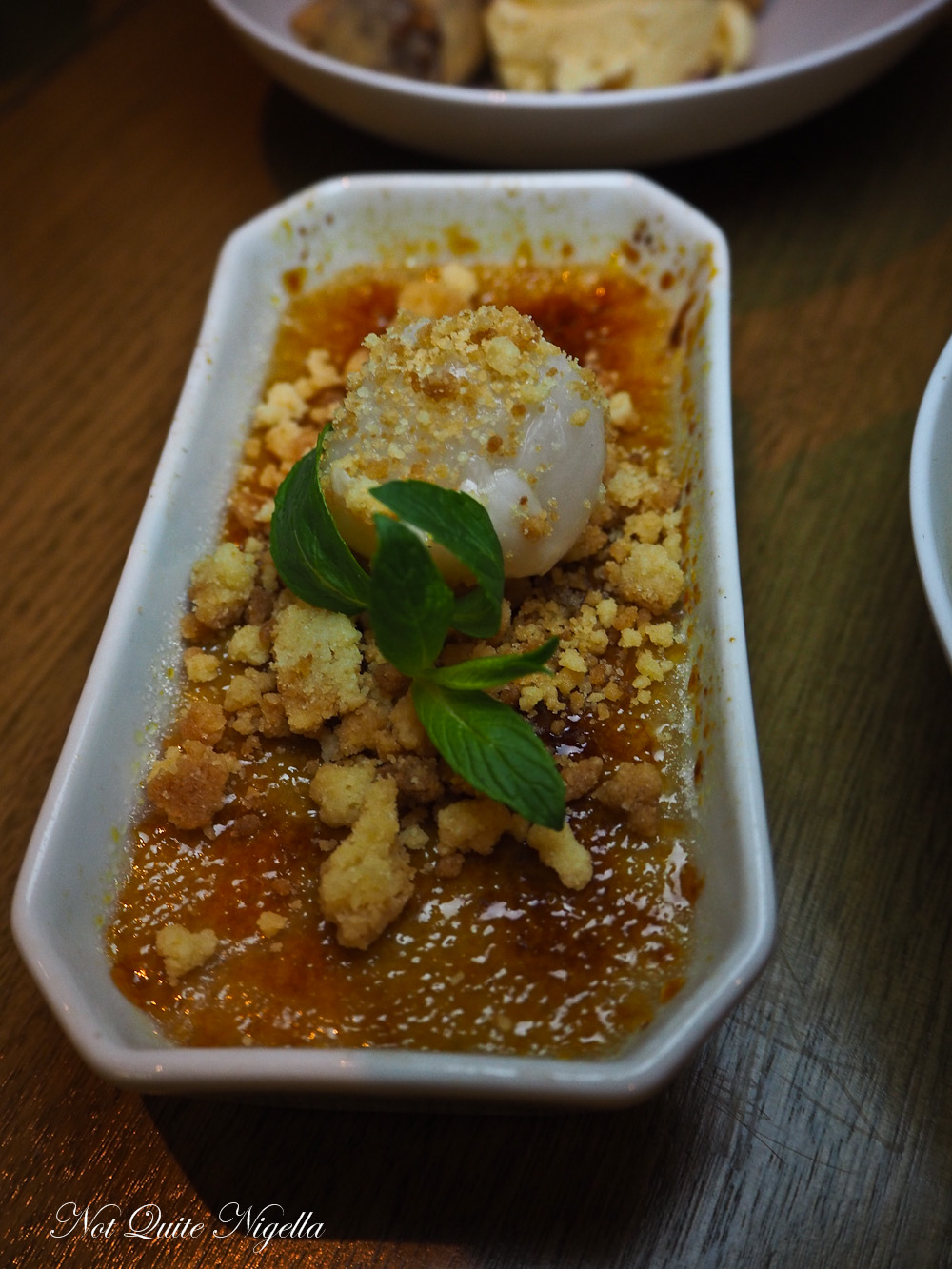 The Earl Grey creme brulee is almost like a mousse in texture and with a distinct tannin taste from the tea. It has a light toffee crust and is topped with a buttery crumble and a single lychee. 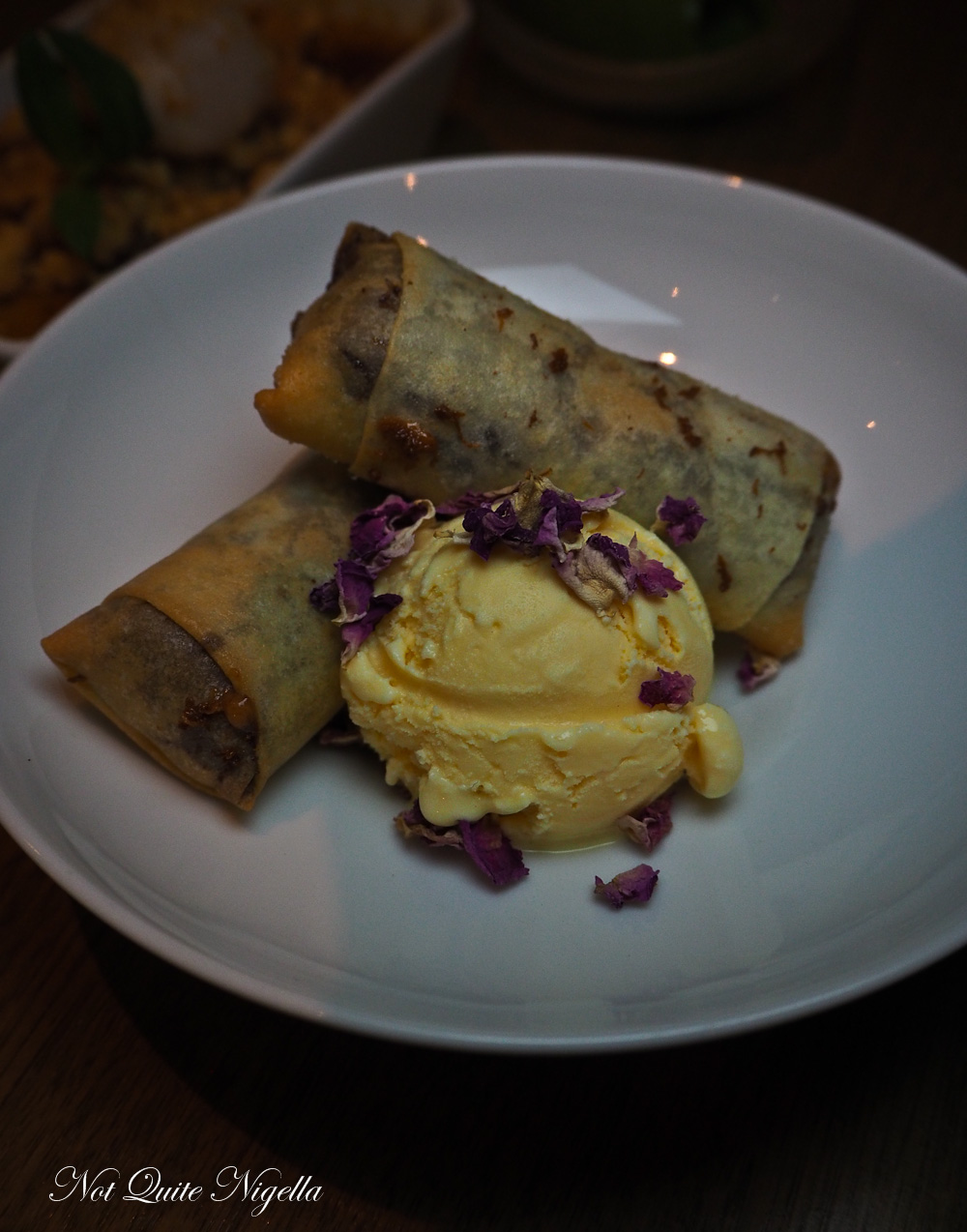 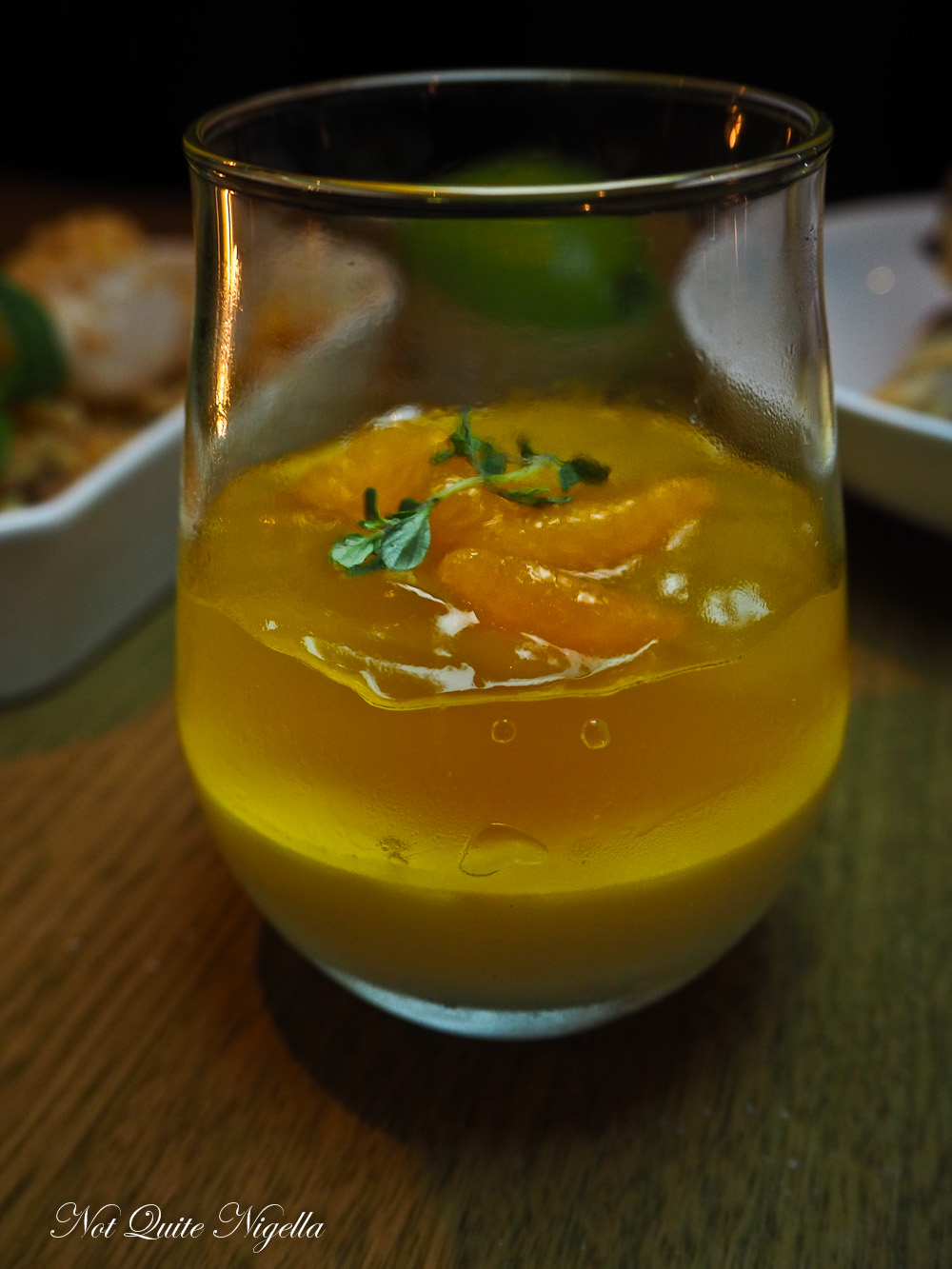 By the time the last dessert comes around to me, I'm already quite full but I can't help but go for a couple of spoonfuls of the wobbly, creamy vanilla panna cotta topped with a yuzu jelly. I absolutely adore yuzu, that tart citrus fruit and this dessert has just the right balance of tart, sweet and creamy.

The bill arrives with some sweets in a takeaway box. It's a very reasonable $60 per person including two bottles of wine. But of course the cost of good company and watching Nick try to woo the waitstaff is of course priceless.

So tell me Dear Reader, do you like to see a restaurant's menu before going there? And do you get slightly nervous if you recommend a place and bring friends there? And have you ever tried a deep fried Mars Bar? What did you think of it? 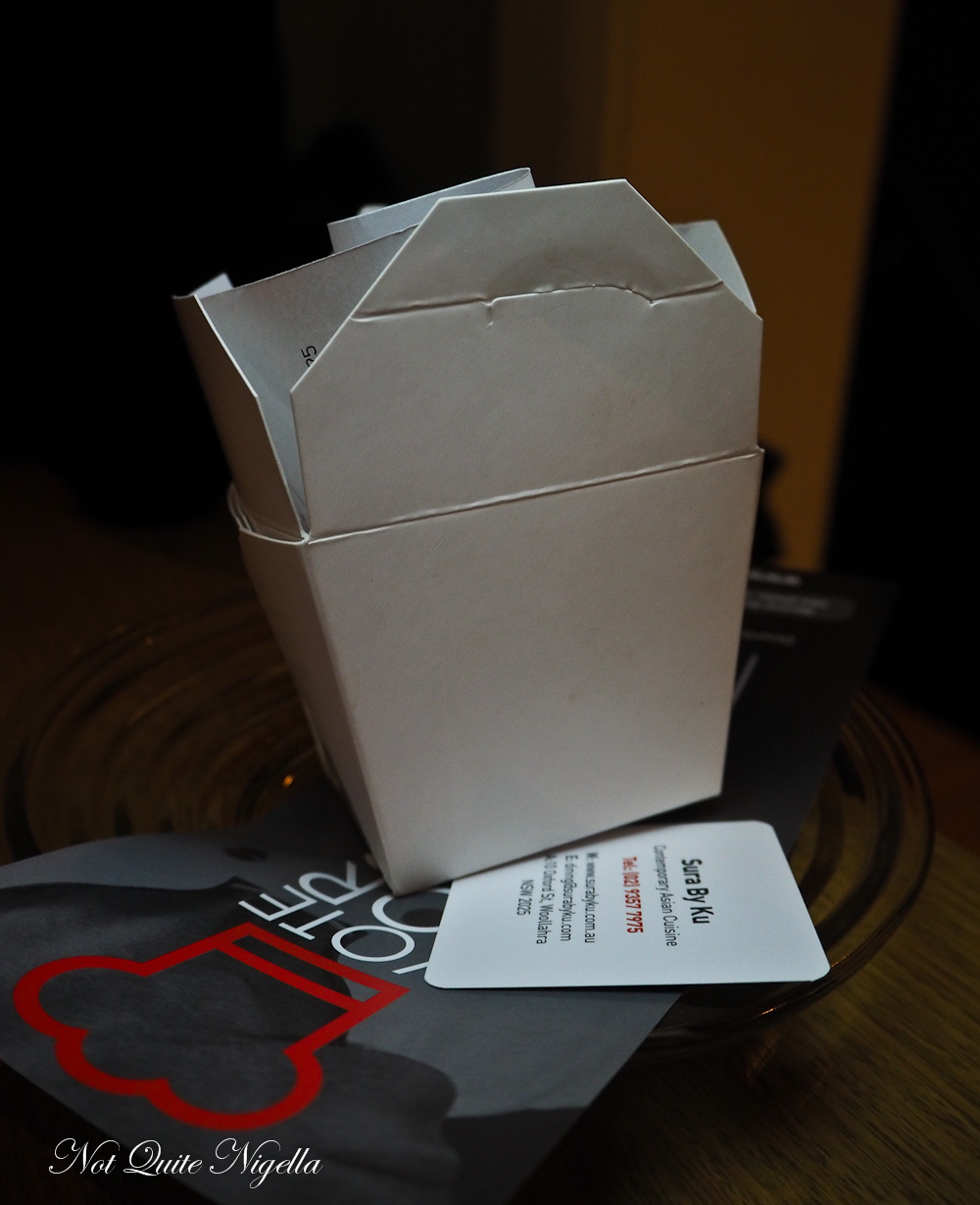