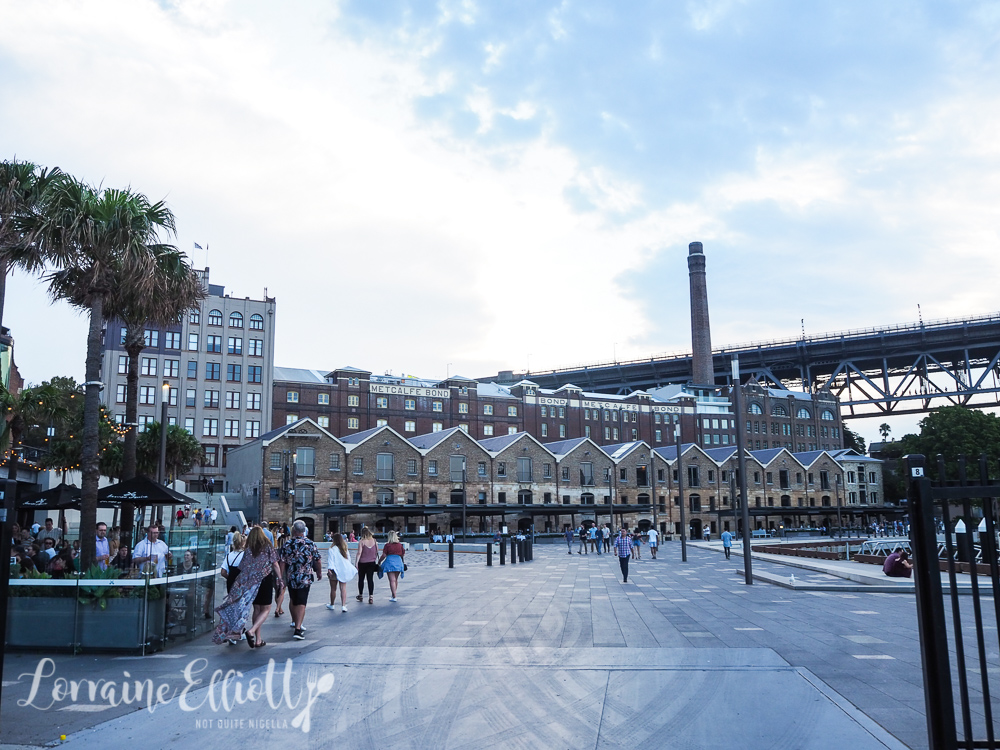 Love a water view but don't want to compromise on the food? Greek restaurant Alpha has relocated to west Circular Quay with stunning views of the Opera House and Harbour Bridge. The Alpha POP menu is a list of delicious Greek dishes as well as divine desserts. 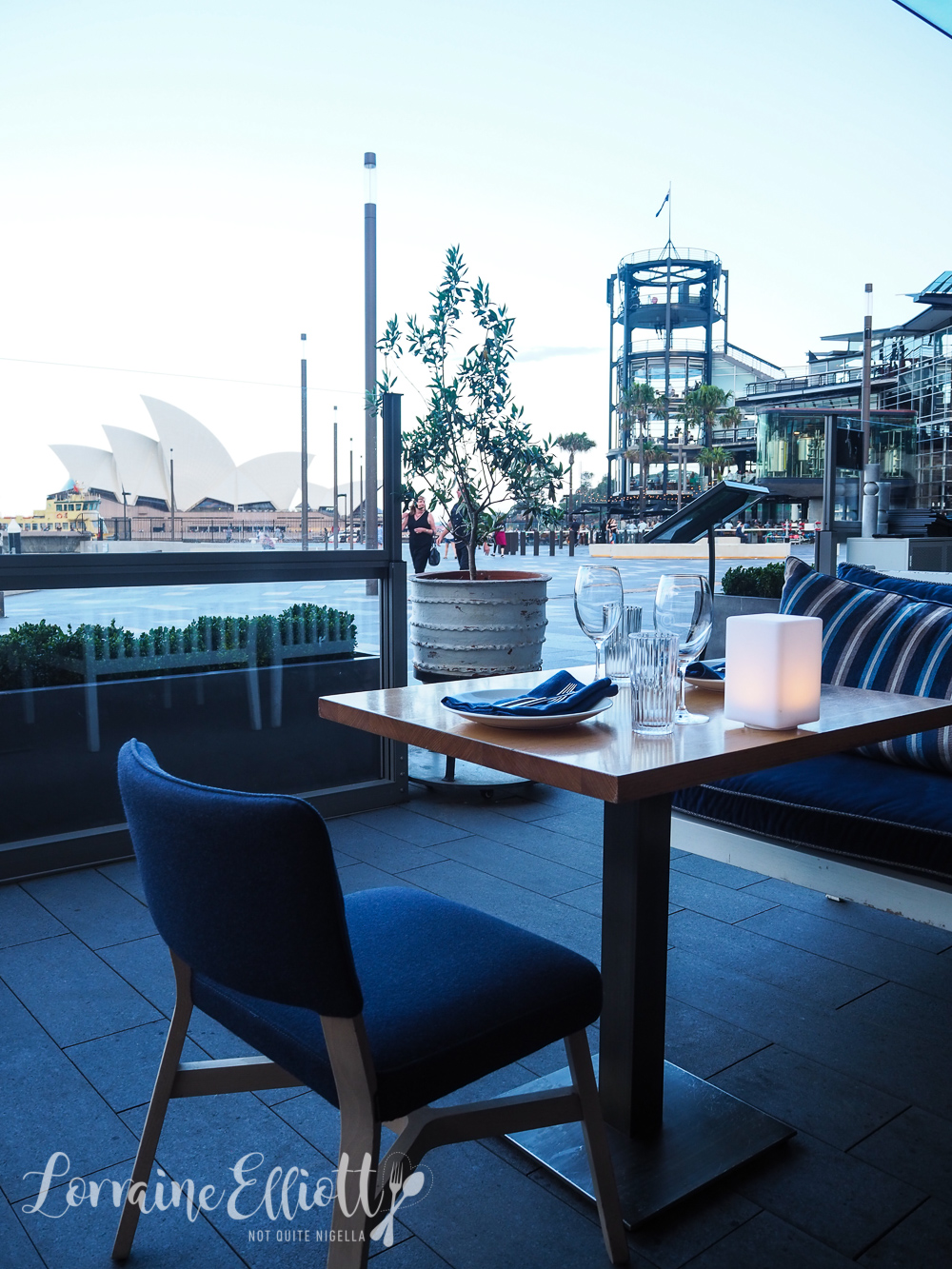 I find so often, when a restaurant has a nice view the food can be mediocre. There are of course exceptions and thankfully the list of exceptions grows by the day but given that a lot of Sydney enjoys a beautiful view, not nearly enough have that killer food and view combination. 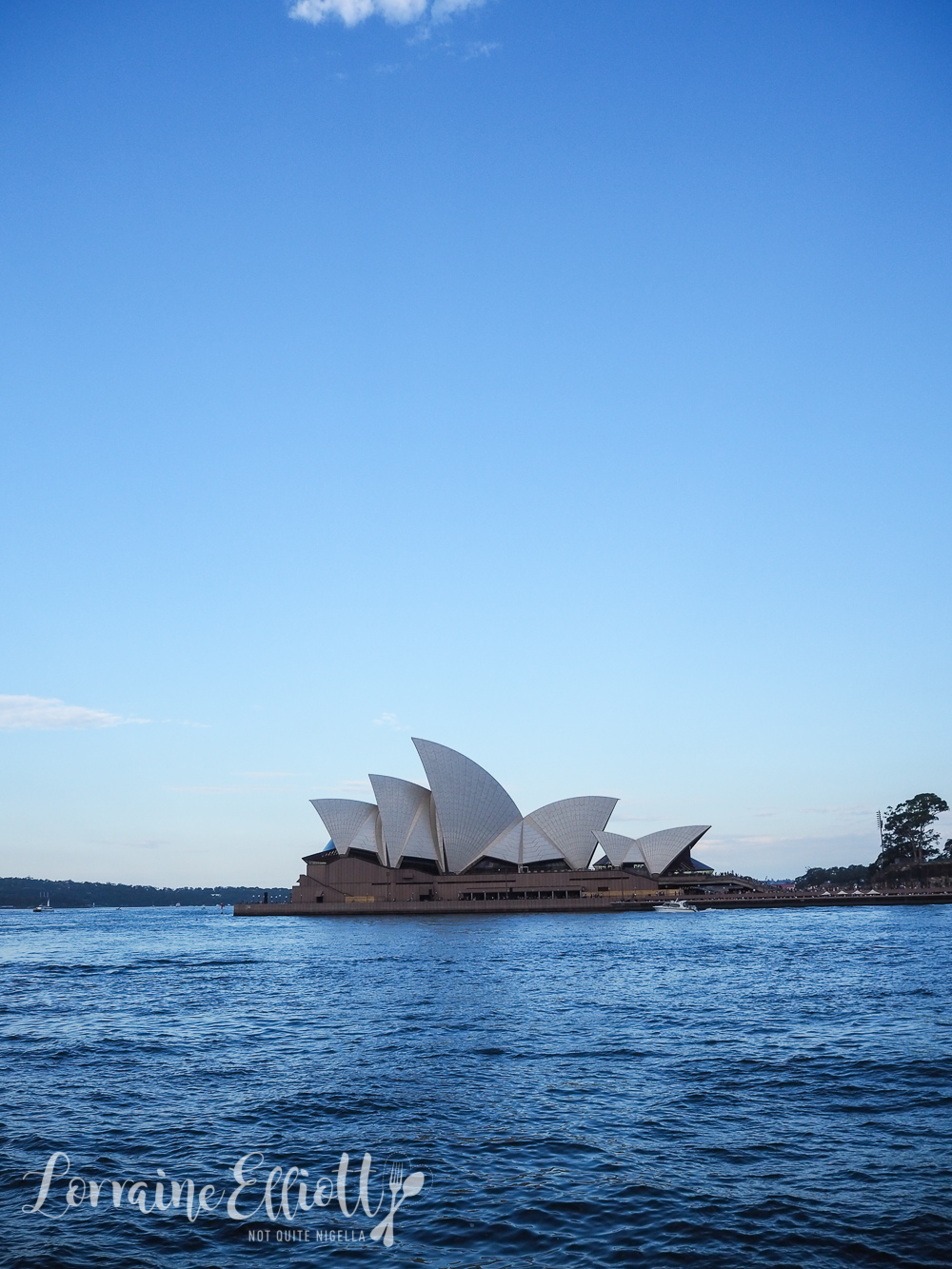 We decided to celebrate Valentines day on the day after on Saturday instead of Friday. That way we would avoid the dreaded set menu and weird atmosphere instead of rushing home after work. 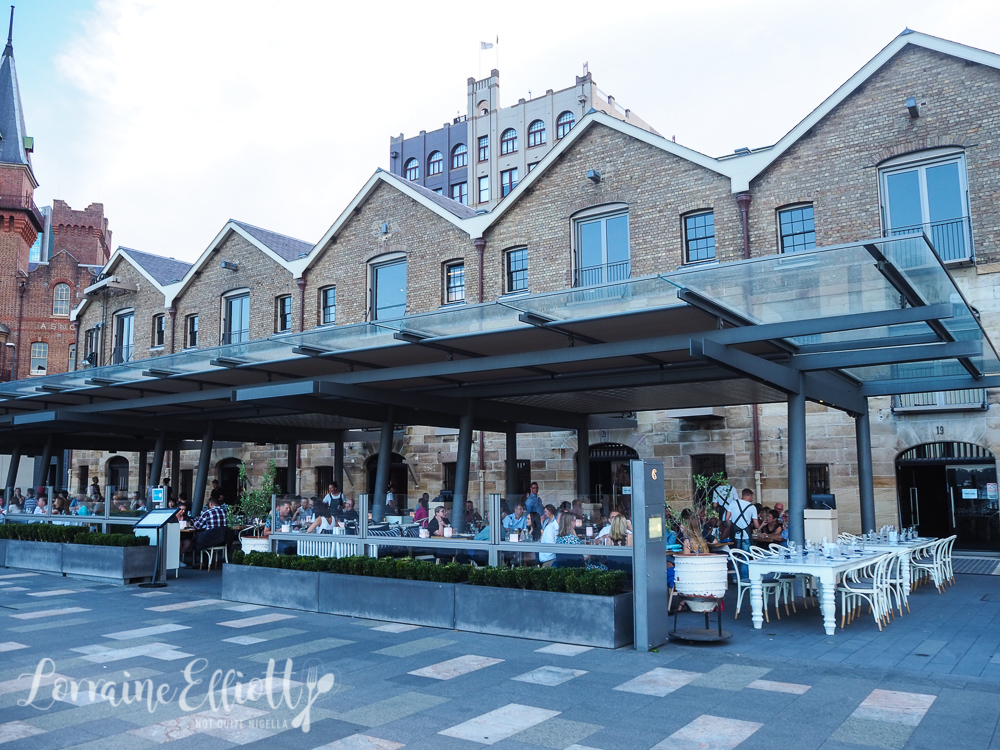 Alpha POP is located at the Campbell's Stores sandstone buildings and is the middle of three restaurants. Our timing is perfect. At 6 o'clock the enormous cruise liner leaves the port and we enjoy an unobstructed view of the harbour. 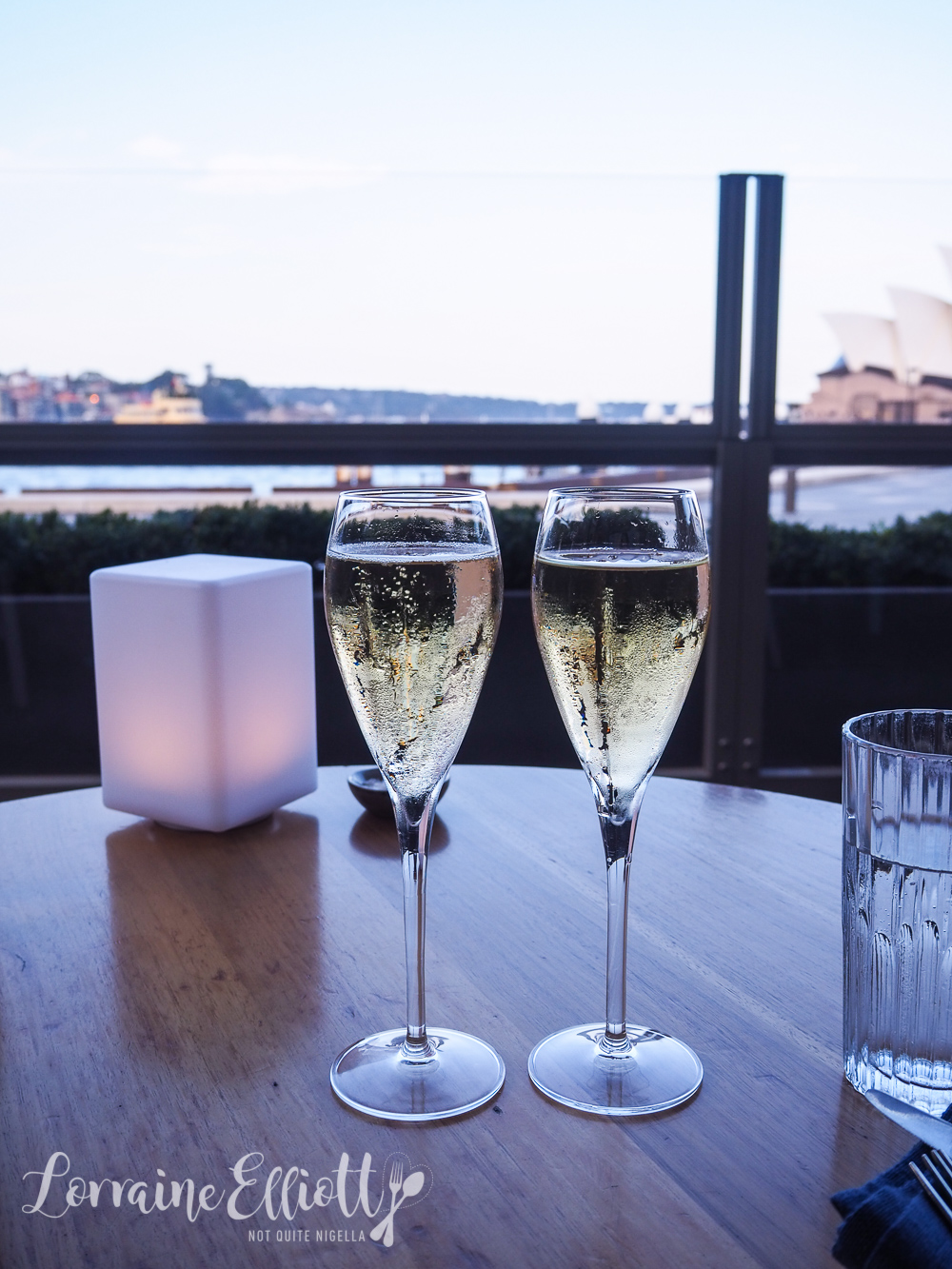 We start with a glass of champagne and decide on what to order. It's hard because there are so many things we want to try. I don't know about you Dear Reader but at this point Mr NQN doesn't even look at a menu and just lets me order and that makes us both happy as reading menus confuses him. 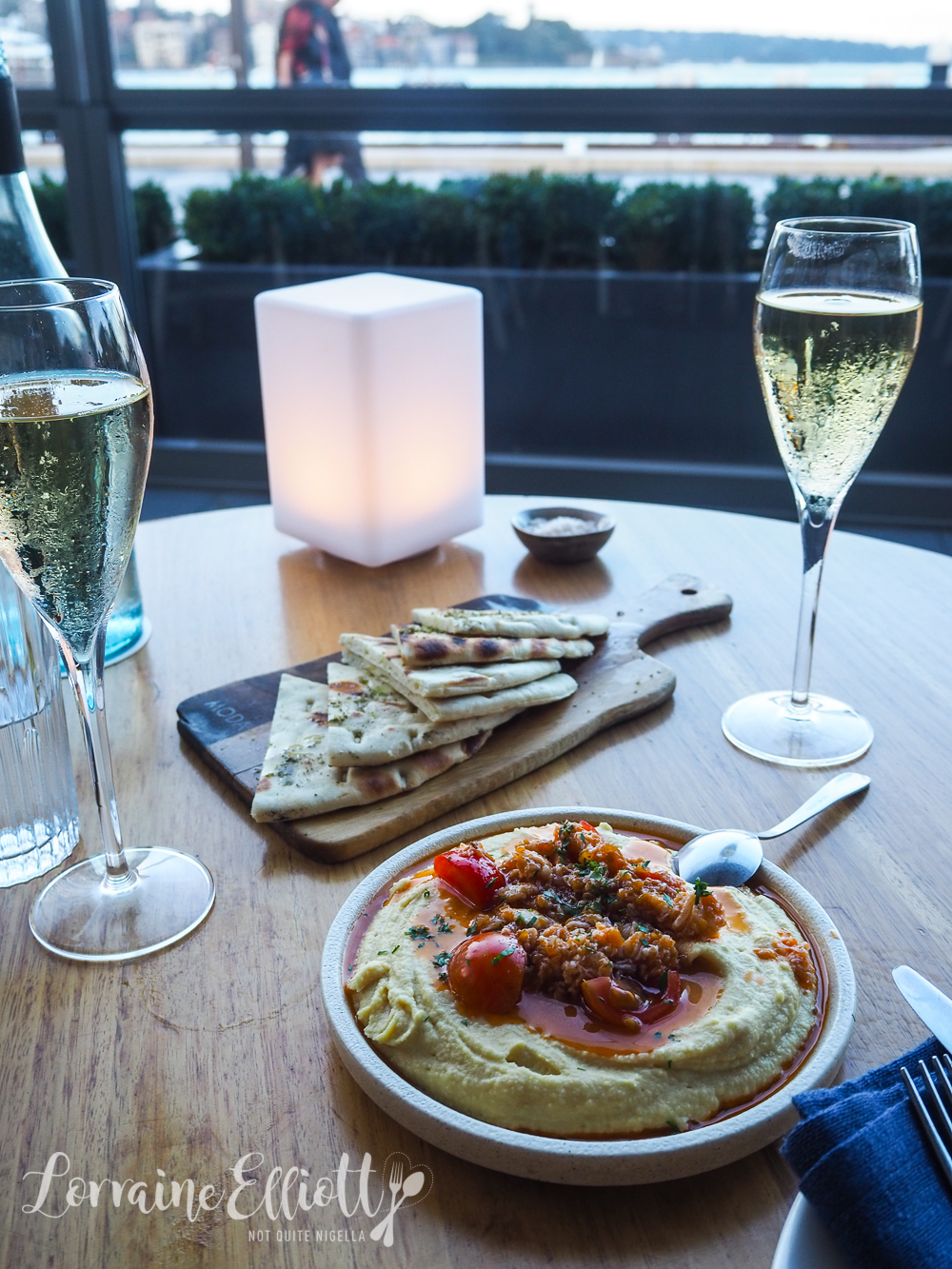 I usually go for the taramasalata but having already tried it at Alpha restaurant I go for the fava dip. It's a split pea dip topped with spanner crab a la Greque and cherry tomatoes. We pair this with the Psomi or grilled pita bread sprinkled with dried oregano and olive oil. The dip itself is beautifully creamy, light and smooth and it's a generously sized serve. 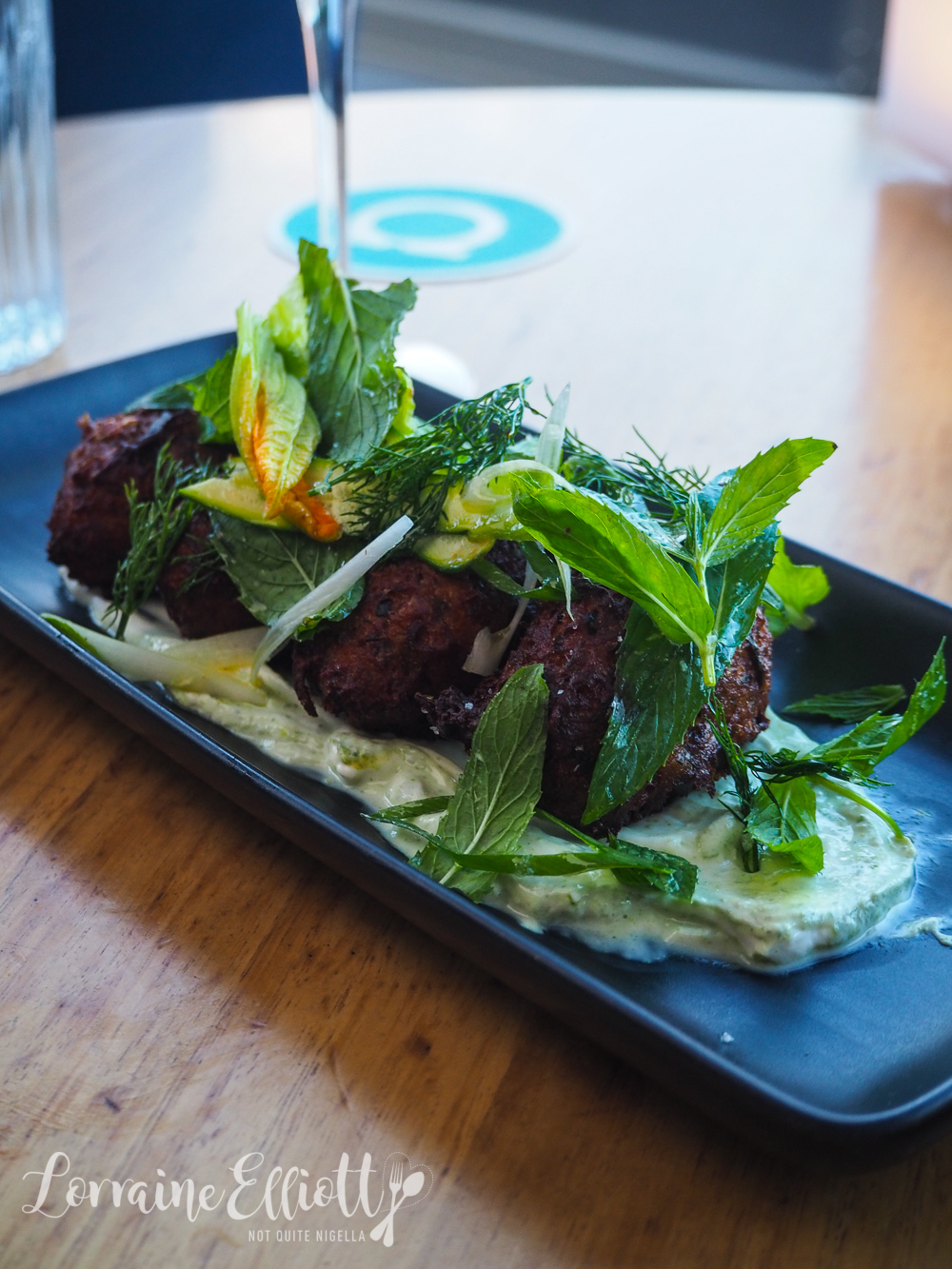 Mr NQN can take of leave food (I KNOW! how did we ever get married?) but he is absolutely smitten with the Keftedes or light as air zucchini fritters that just melt in the mouth. They're paired with a zucchini blossom salad, zhoug yoghurt and plenty of fresh mint and dill to lighten it. 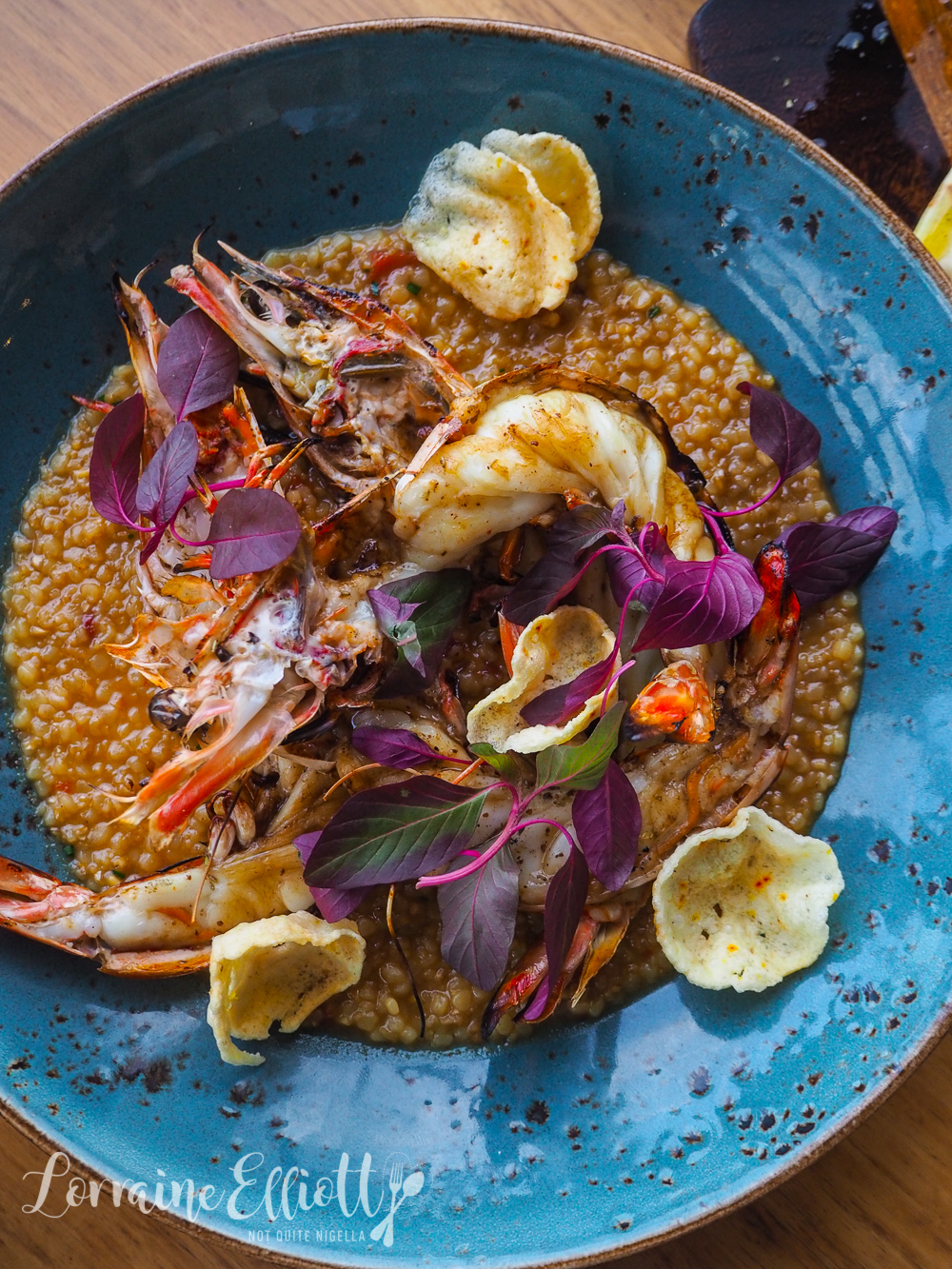 We ordered the prawns because I was interested to see Scarlet Prawns with a Greek treatment. Unfortunately they weren't able to get scarlet prawns that day and the waitress didn't tell us when we ordered. They've used split grilled king prawns with Kakavia, a seafood soup that is as intense as a bisque and trahana, an eastern Mediterranean grain similar to bulghur in look. When we enquire about the scarlet prawns, they apologise and take this item off the bill. 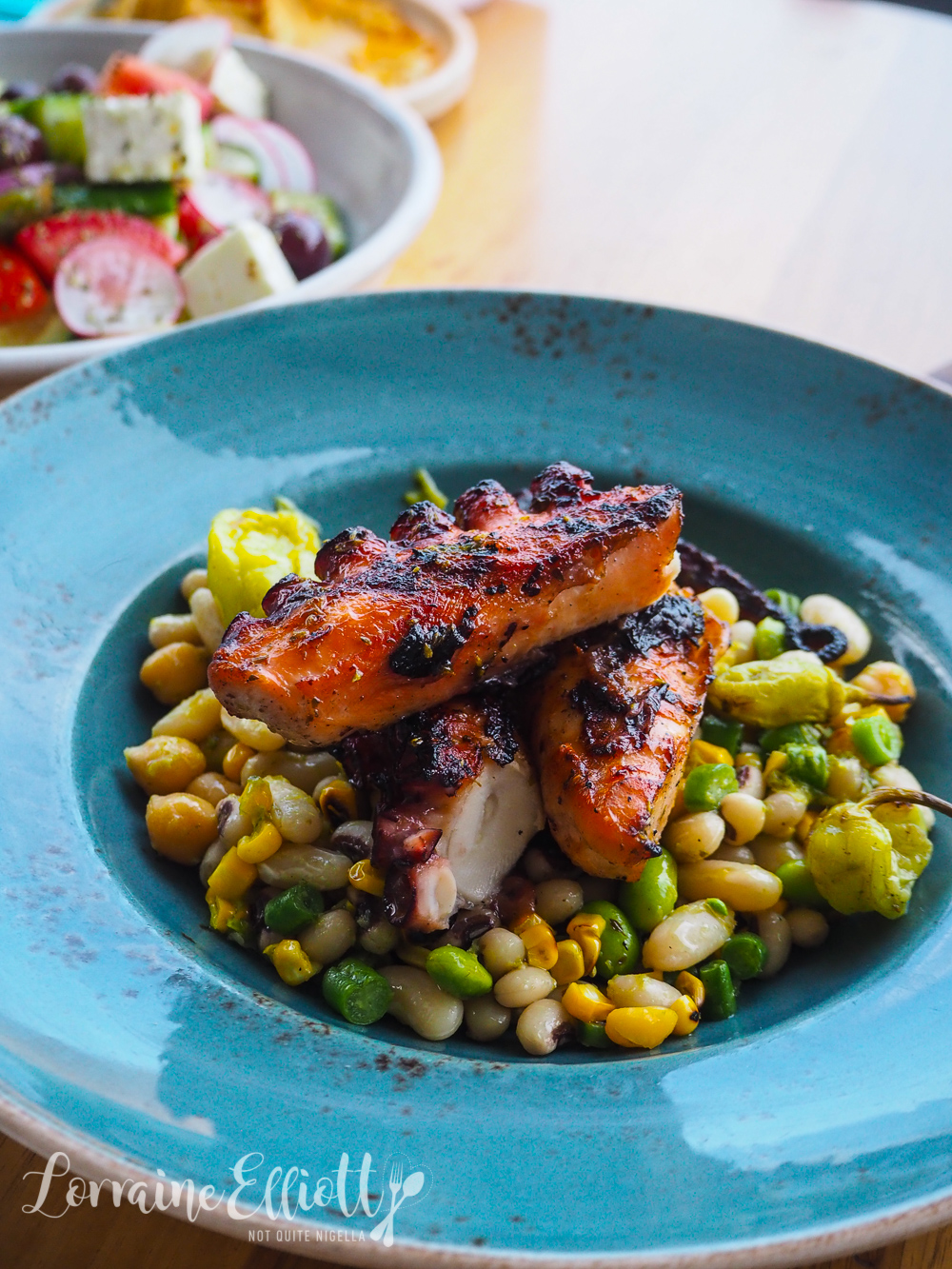 We both love the Htapodi or twice cooked octopus that is char grilled to perfection. It sits on a bed of bean salad with cannellini beans, green beans, chickpeas, black eyed peas, corn and edamame with pickled chillies. I add a little of the fava dip to the bean salad to moisten the salad but the octopus is divine. 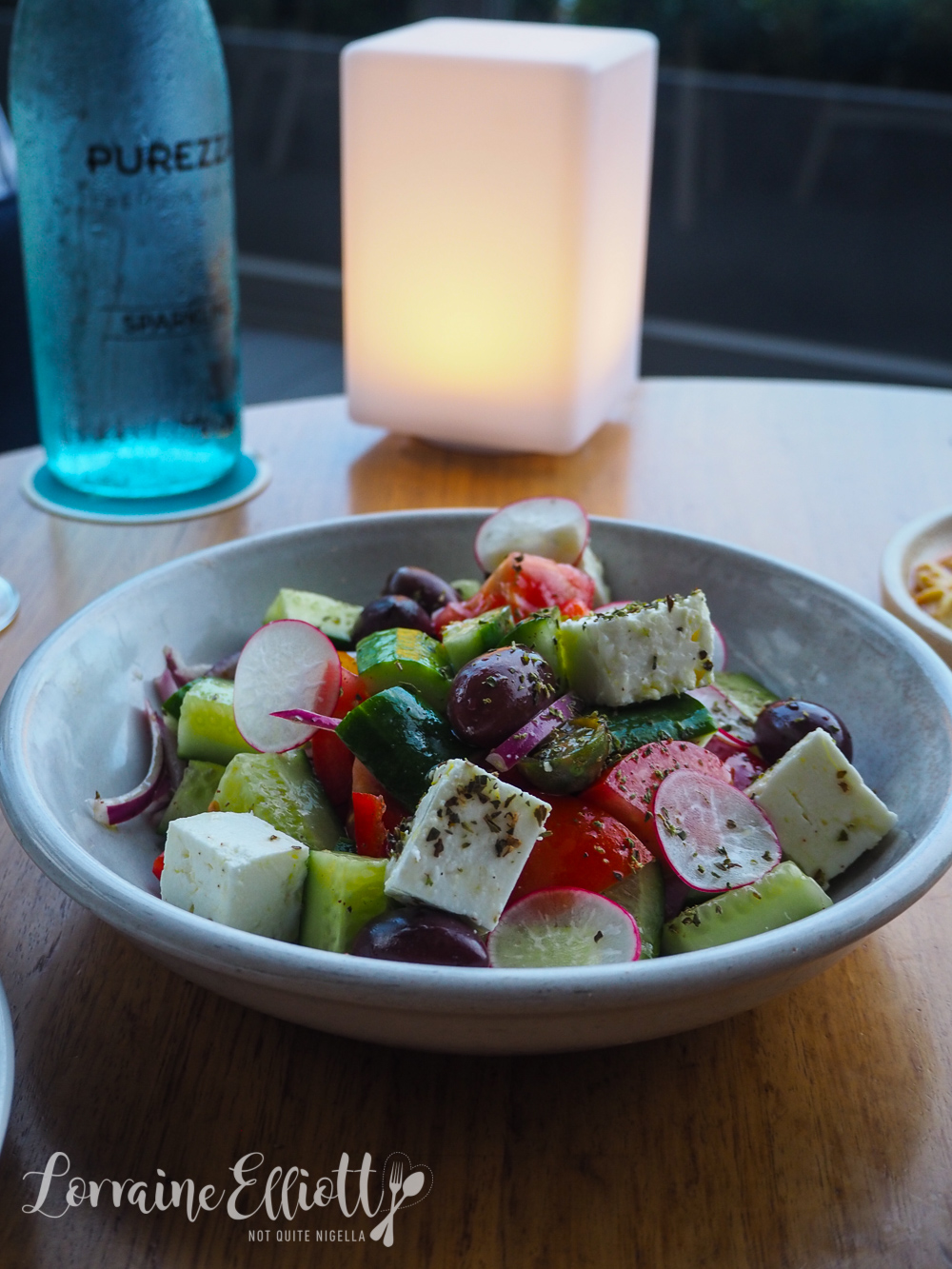 For sides we order a classic Greek Salad. There are tomatoes, cucumbers, olives and feta and it's refreshing and perfect for a sultry Sydney night. 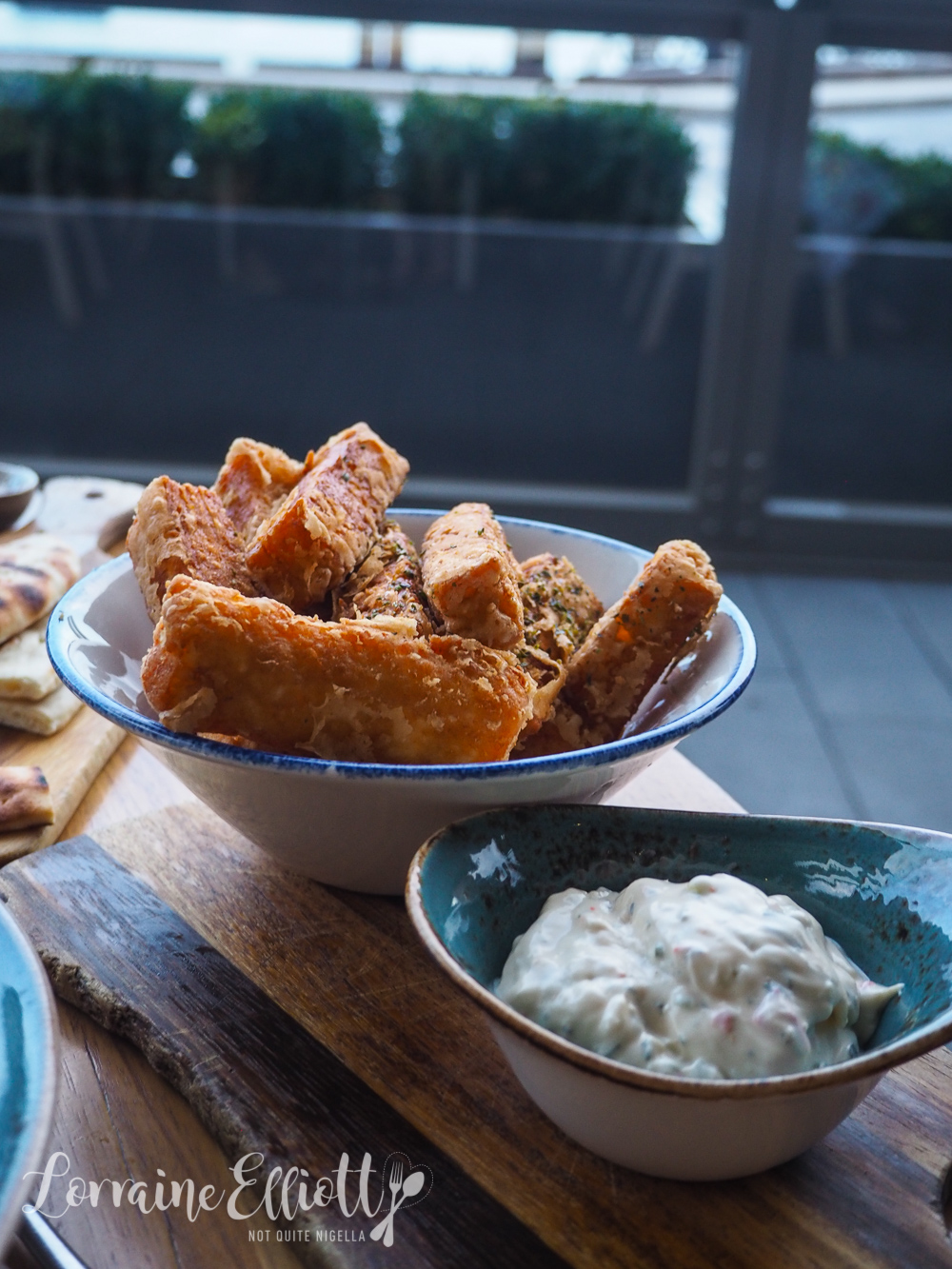 Oh my kingdom for a bowl of these halloumi chips. These are the best halloumi chips I've eaten and you have to eat these while they're hot and the cheese is at its peak texture. It comes with a very moreish sweet chilli tzatziki on the side. 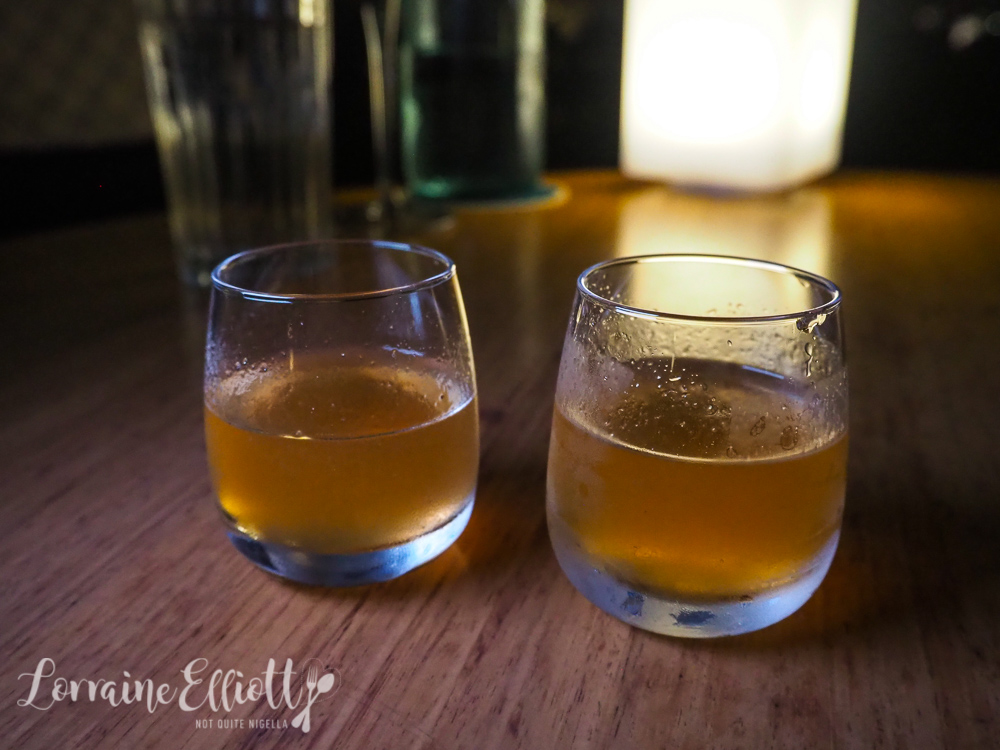 For dessert, they bring out some complimentary baklava ouzo which is delightful and not too aniseedy. 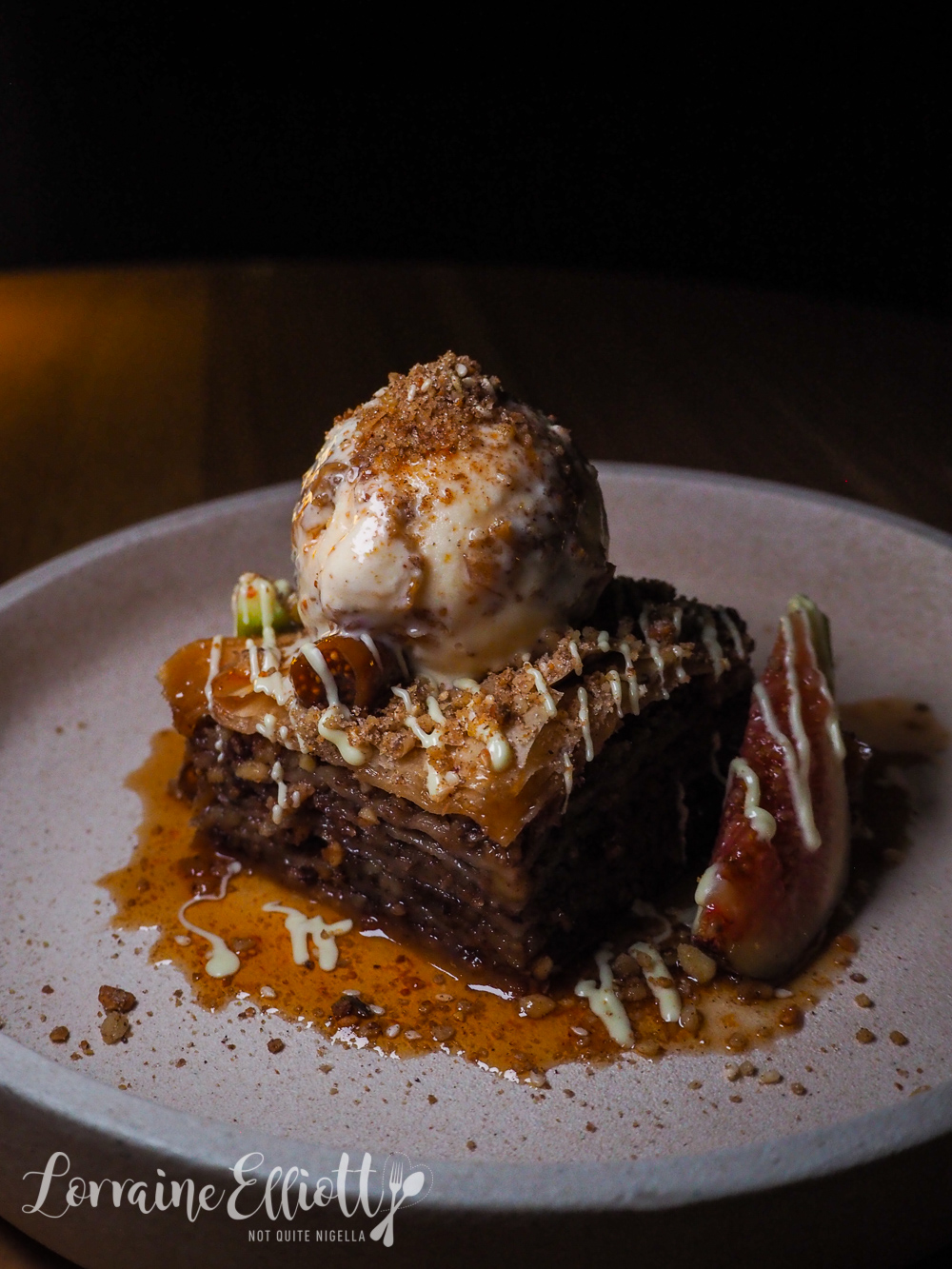 It's dessert time and I have a particular love for Greek desserts, especially pastry based ones. It's an easy choice with the triple chocolate baklava with almonds and a poached fig ice cream scoop on top. This is also a sizeable portion with gorgeous layers of pastry, nuts and chocolate and we also love the dried and fresh fig that comes with it. 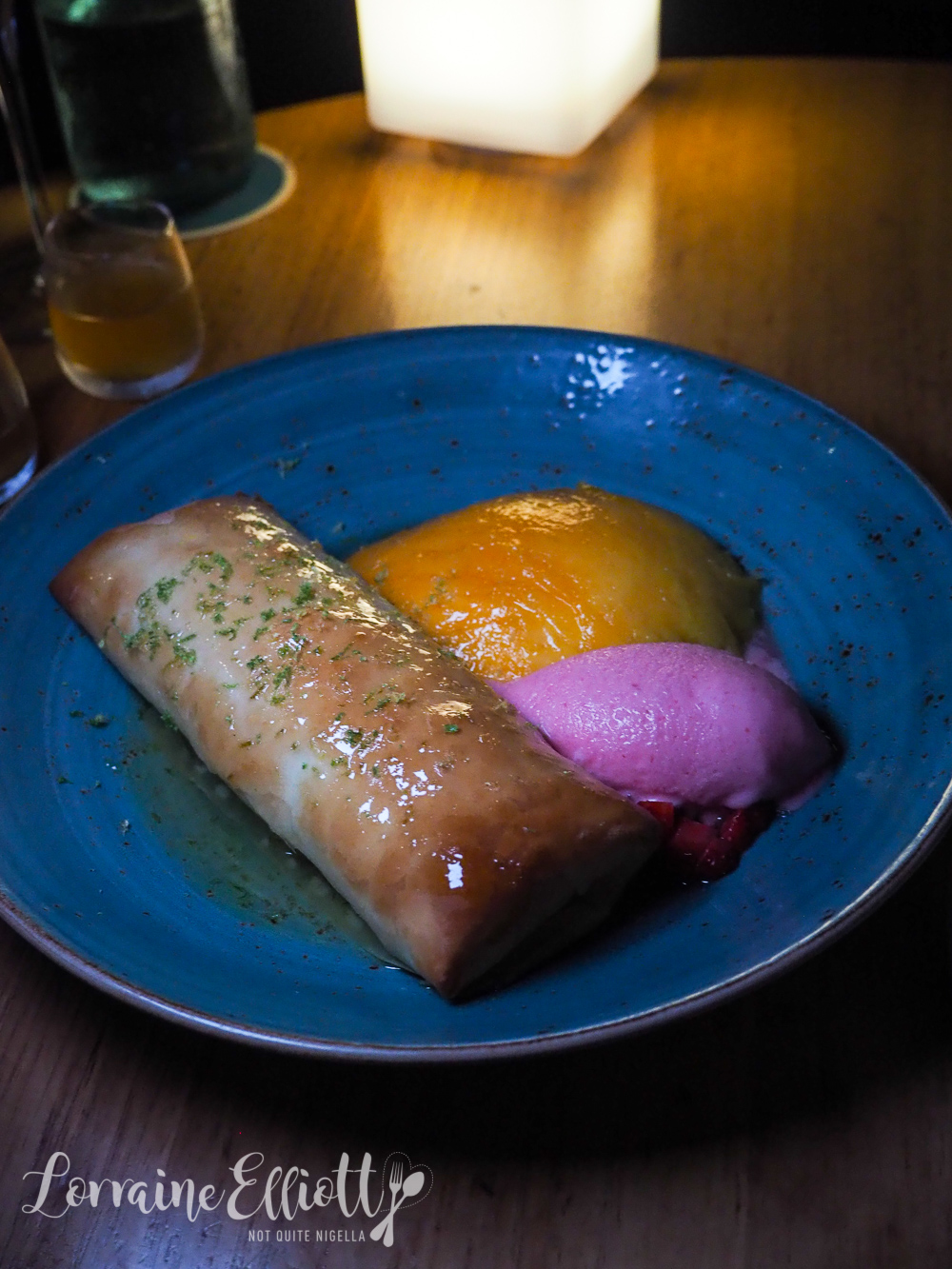 I also love the Galaktoboureko or milk custard pie lightened with lime syrup and grated lime zest, strawberry Pagoto gelato and a cheek of mango. I love the pastry half while Mr NQN loves the fruit and gelato. I suppose that's one thing that keeps us together-we share well together!

So tell me Dear Reader, are you the chief orderer when out at dinner? And what do you think is the secret to a happy marriage?