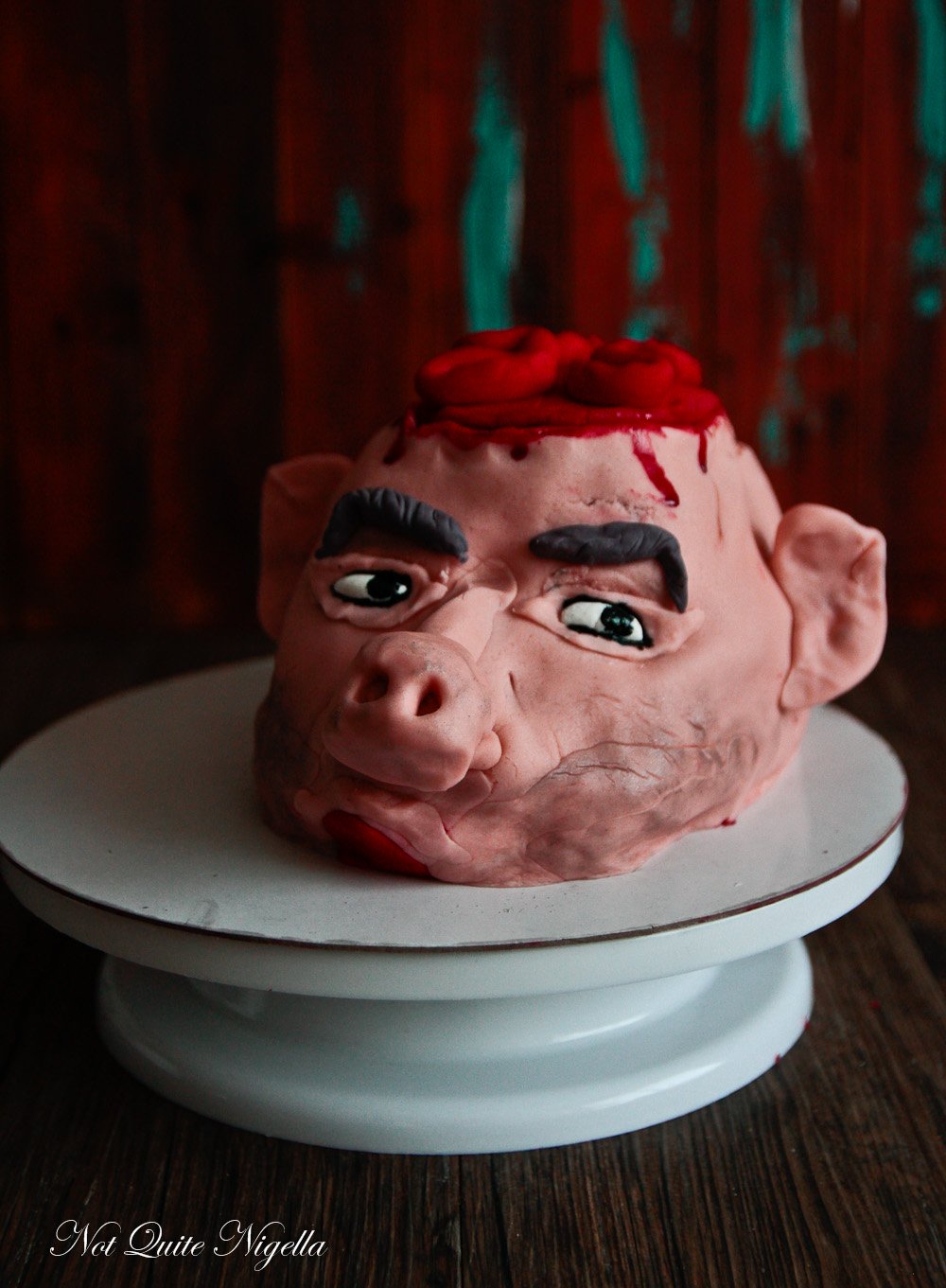 Dear Reader, as I write to you I am nursing a glass of whisky and smoking a cigarette. Okay the second bit isn't true but the first is because today my lovelies I came close to a cakedown (aka a cake breakdown). For those of you who like to interject conversations with terms like "First world problems!" look away now because a cakedown is the definition of a first world problem.

A cakedown occurs when your mind's imagination is greater than one's ability conjures up great projects. Your arms and fingers can't exactly do what your mind wants it to do. One day I said to Mr NQN, "I'm going to make Ray Liotta's head from that notorious brain eating scene in Hannibal..." to which he murmured something vaguely encouraging but noncommital. He knows the early onset sign of cakedown - mainly the announcement of a new cake idea. 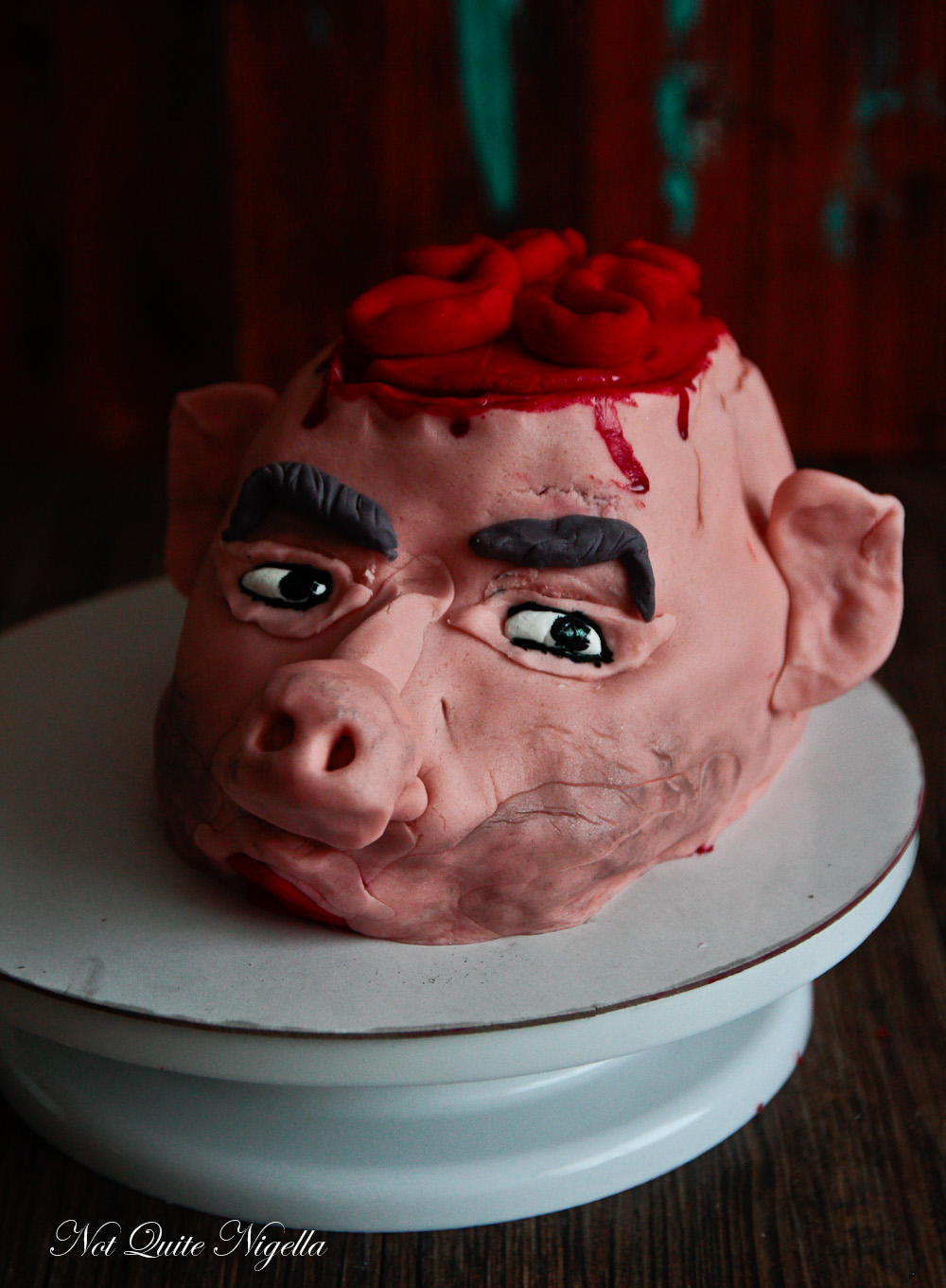 So I printed off a pic of Ray Liotta's head during that gruesome scene and then set about making a human head. I remember Linda made a gorilla head with monkey's brains so that was the basis for the human shape. And when I made the skeleton I thought that it did look like an approximation of a skeleton.

When it came to putting the fondant on, well that's when it all fell apart. Literally and figuratively. It was a 35 degree day but I was ambitious and undeterred. I had a huge Halloween schedule to stick to and today was the day for Ray Liotta's head. Well let's just say that it looked nothing like Ray Liotta and I somehow thought that when I added fondant it would. I was videoing it for my youtube channel but when I realised that my efforts were in vain had a mini breakdown. I stopped filming and half way through started wailing dramatically, "It's not Ray Liotta!!" in the same "Stella!" voice from A Streetcar Named Desire (although my effort was more like Elaine from Seinfeld).

I made myself a cup of tea and regrouped. I thought it looked like a cross between Mr Bean and a prison escapee but then another thought popped into my mind when I looked at it just so. Pig man! Mutant pig man! And that is how within the space of an hour, I went from a cakedown to happy dancing. So now we have Pigman with a bit of Ray Liotta mixed in (okay not really) for our Halloween centrepiece! I actually did make a video of it for my new Youtube channel but half way through making the cake, there was a cakedown and that wasn't pretty so I'd best not share that side of me with you ;). Just picture a kid crying heavily with loud, dramatic sobs over cake.

So tell me Dear Reader, have you ever had a cakedown or a cooking breakdown? What was it over? We can have a support group! And what do you think of the term "First World Problems"?

Decorating time: 4 hours (you need to refrigerate it at times so it's not decorating for the whole time)

Degree of difficulty: hard (I had to have a breakdown) 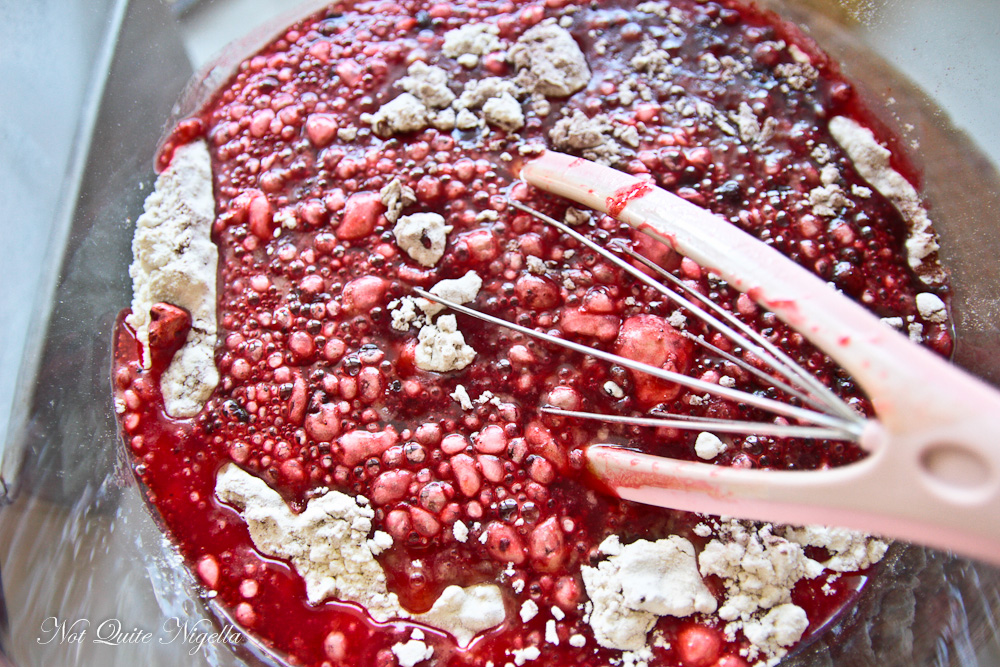 Step 1 - Make the cake a day or two before you want to decorate it. Line a 8x8 inch square baking tin with parchment. In a large pot, melt the butter, chocolate, sugar and water on low heat until melted and smooth.Cool for 15 minutes. 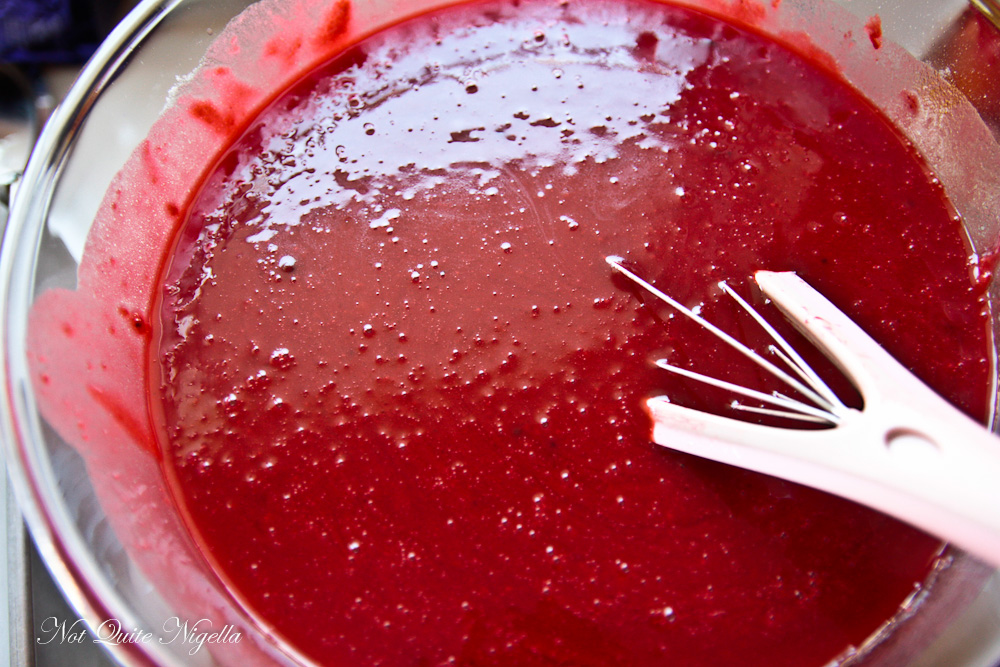 Step 2 - Preheat oven to 150C/300F. Whisk in the flour, cornstarch, baking powder, eggs and food colouring until smooth and mixed in well. Bake for 1.5 hours to 2 hours until a skewer inserted comes out clean. Cool in tin and wrap in cling film.

Step 3 - Make the ganache by melting the chocolate, cream and food colouring in a double boiler or in a microwave. Mix until completely smooth. 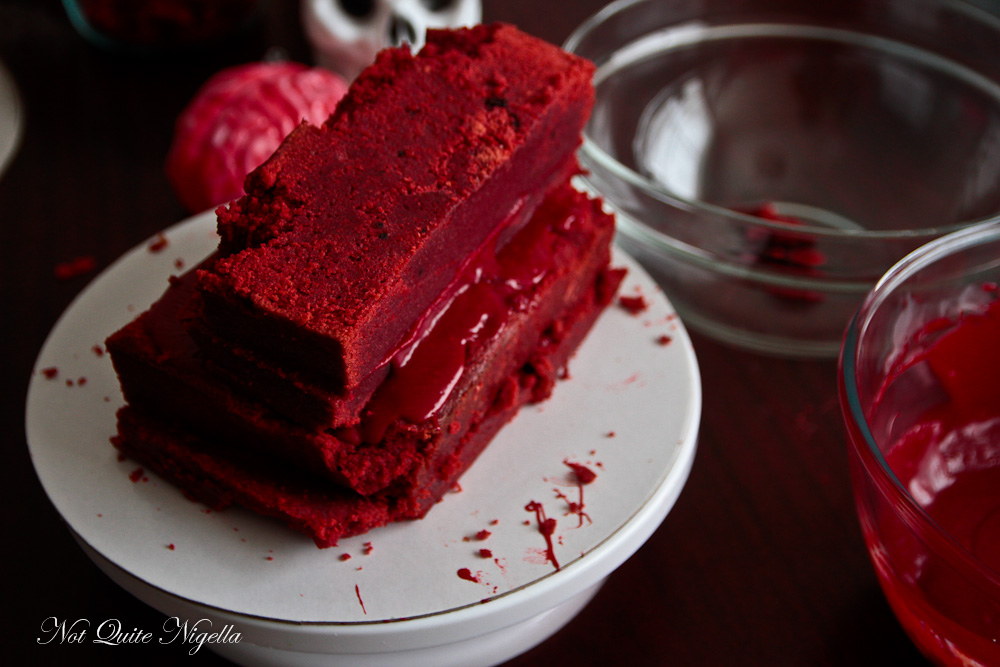 Step 4 - Place a cake board on the turntable and slice the cake in half horizontally and fill with chocolate ganache. Place on cake board. Remove the crusty bits on top and discard (or use in cake pops). Cut the cake along the two thirds measurement and place the one third portion of the cake on top of the two third portion. Refrigerate to set (this is necessary if you are doing this in a warm climate, less so if it is cold). 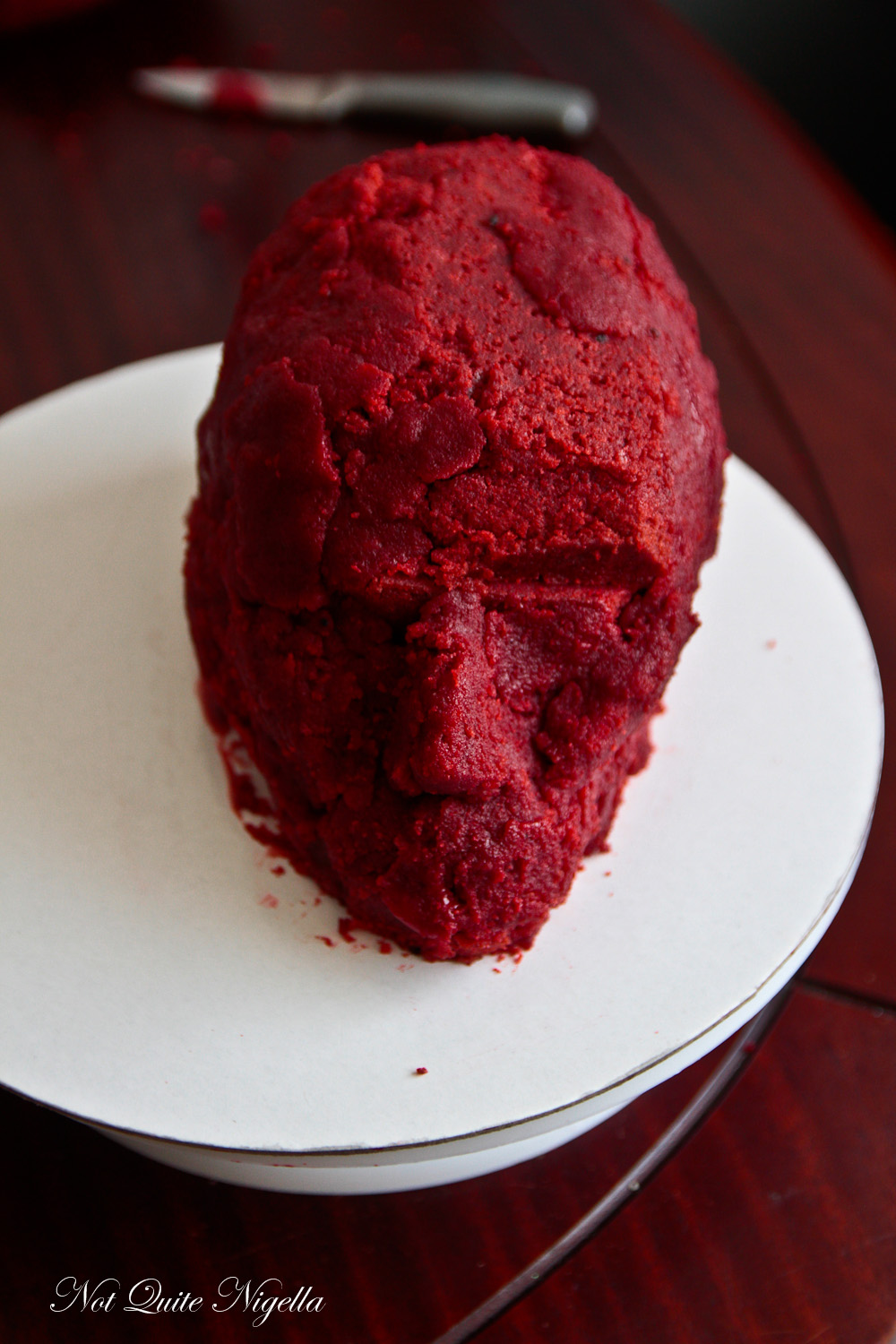 Step 5 - Trim the cake to make a skull shape. The best way to do this is to make an oval shape. Place the trimmings in a bowl and mix with some of the ganache to make a firm paste. Fill in any gaps on the sides to make the head keeping the chin out. Keep patting and adding bits of cake and trimming the cake back until you get something like a skull. Don't worry if you cut too much, you can always replace it. Refrigerate until firm but do not refrigerate the ganache.

Step 6 - Using a palette knife, spread the ganache over the skull covering all of the cake crumb area. Don't worry if it isn't smooth, you'll fix that up later. Just make sure all of the cake is covered. Refrigerate again until the ganache is firm and set in the fridge.

Step 7 - Smooth the ganache with a glass of regular tap water (I say this to mean not cold and not hot water). Dip your palette knife into the water, tap it on a surface and then smooth the ganache with a firm but gentle pressure. This bit takes a bit of practice and the first time you may find yourself adding too much water or being too firm. Like everything practice makes perfect or at least less clumsy as far as I am concerned. Place in the fridge while you colour the fondant. 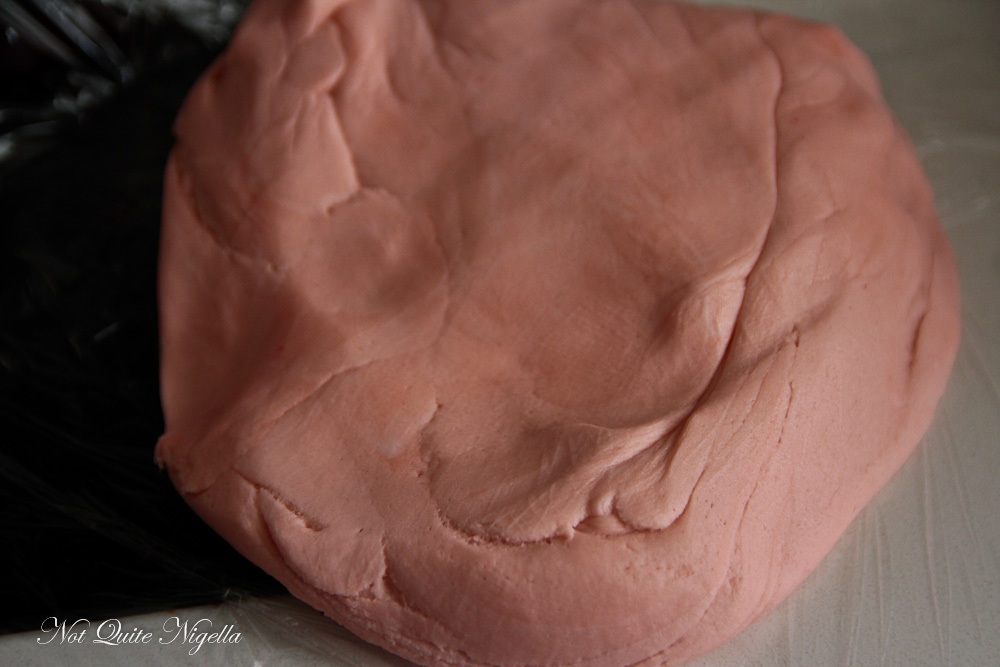 Step 8 - To make colouring the fondant easier, I massage the fondant in my hands and then place it in a mixer fitted with a dough hook. Reserve a little ball of white fondant for the eyes and then knead the rest of the kilo of fondant with flesh colours. For me I used copper flesh and a dab of dusty rose and black gels. Always cover fondant with cling film or plastic.

Step 9 - Sprinkle some cornstarch on your board and roll out a long length of the fondant (enough to go around the head but don't worry if it's not exact). Gently lift it onto the cake and pat it down firmly. Trim off the excess, reserving them for reuse if they aren't stained with the red ganache. 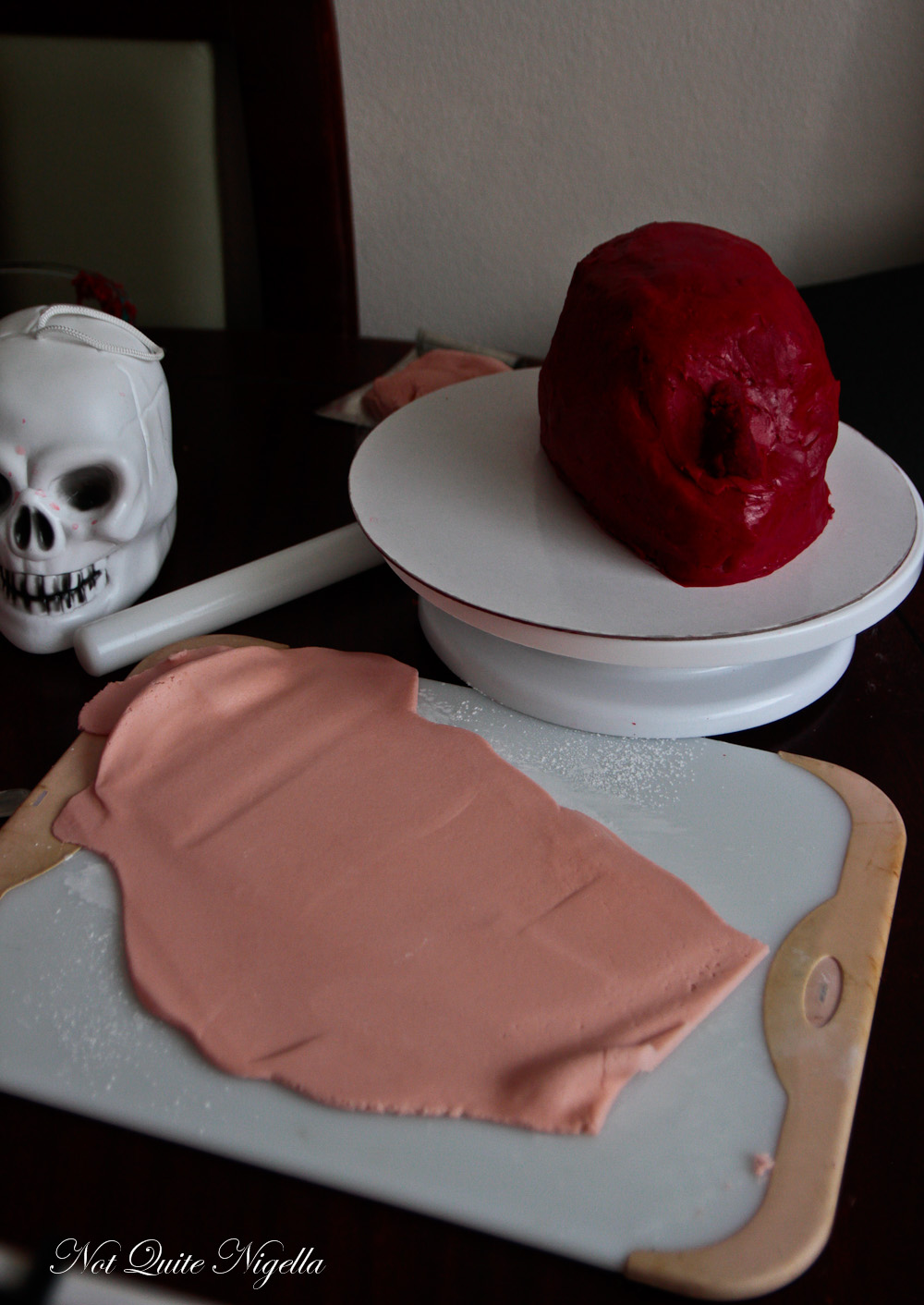 Step 10 - Mix some of the black colouring with the flesh tone and make eyebrows. Use a paring knife or toothpick to draw hairs. Roll out some of the flesh fondant and cut out almond shapes. Attach these to below the eyebrows. Make eyes using the reserved white fondant. Fashion a pig snout out of the flesh fondant and poke holes in the snout using a chopstick and make the lips. Add pointy ears to the side. If the fondant has trouble sticking, add a little water and use scrunched up pieces of foil to lend support while it is drying.

Step 11 - Roll out a small amount of red fondant to make a mouth and then roll out a larger amount for the brain layer. Roll the red fondant into sausages and curl on top of the head so that it looks like brains. 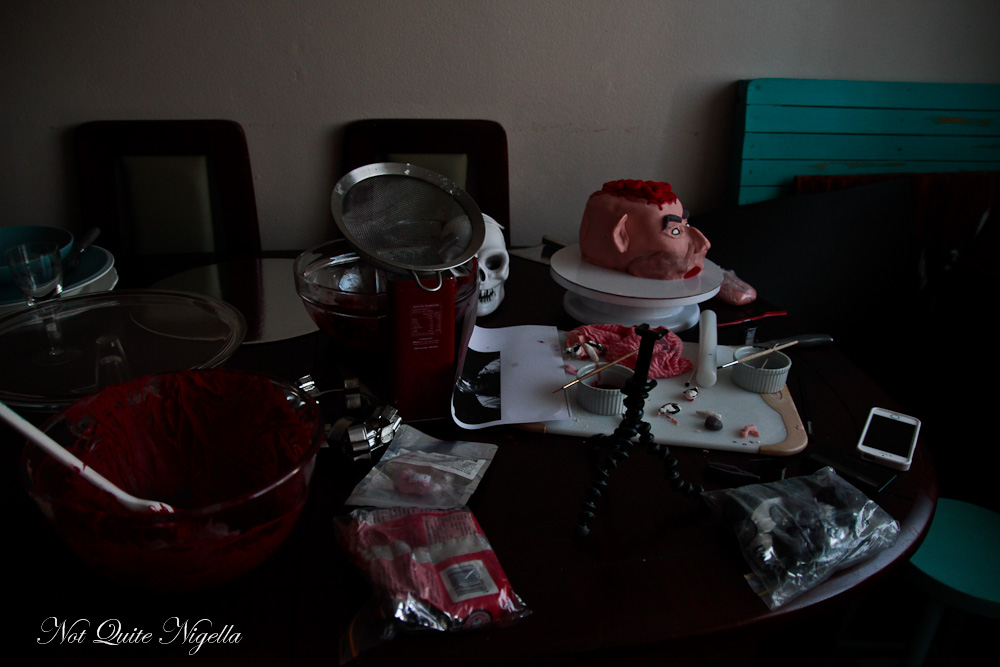 Step 12 - Place some red and black colour gel in two small ramenkins. Draw some blood drips on the head as shown. Using the fine black paintbrush, draw eyes and rim the eyes.

Step 13 - Give the pig man a rough surfaced face by making marks with a blunt knife or a toothpick. I used a decorating tool but you don't need one. Take the white and black colouring powder and brush along where the pig would have a 5 o'clock shadow. I know that sounds weird but hey you just made a pig man so I'm guessing weird is your sort of thing as it is mine. 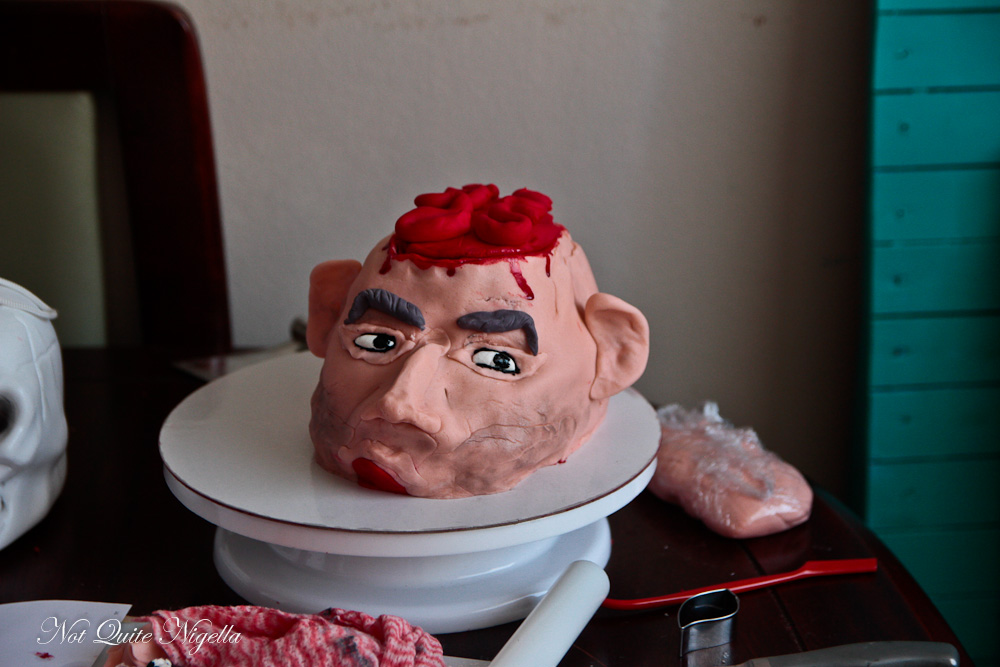