For the last few months Belinda and I have been talking about our sequel to our epic American Road Trip. We were planning to start in Maine and make our way down to Florida to end up at where else but Harry Potter world (where I'm hoping to live, shh don't tell them). But it was at an American tourism function that I met a woman from Nashville. "Oh honey, in Nashville we're more than just music. Let me tell you about our hot chicken!" she exclaimed, all Southern charm. 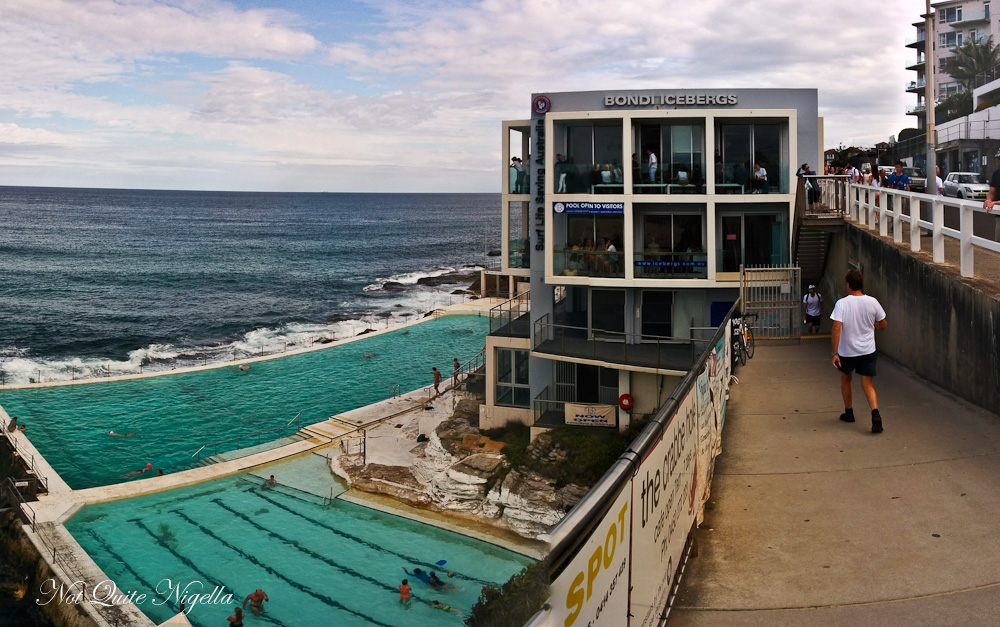 Legends abound about Hot Chicken but is said to have been invented in the 1930's when Thornton Prince came home from "tom catting" around. His girlfriend offered to fix him something to eat and it was a dish that she was certain would blow his head off with heat. It didn't, he loved it and now his great niece André Prince Jeffries runs "Prince's Hot Chicken Shack".

The hot chicken is served on slices of white bread, the bread soaking up the scarlet chilli. In Nashville, the bone in chicken is marinated in a hot sauce laced mixture, then dipped in flour, dredged in buttermilk and deep fried. The hot oil is added to a cayenne and smoked paprika mix and this spice paste is brushed over the cooked chicken. Insert fiery hot and crunchy chicken into mouth and sweat. 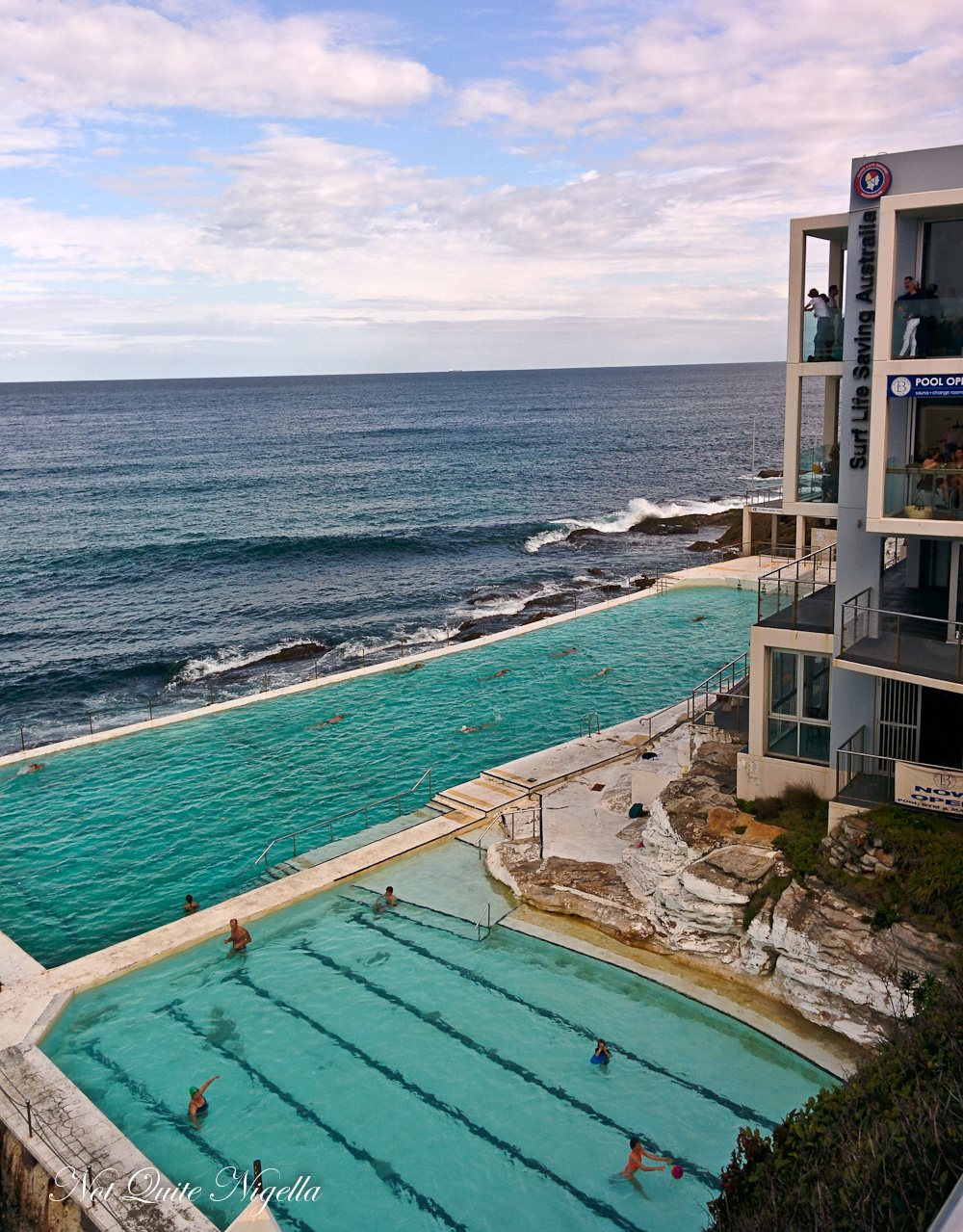 A bit further, actually a lot further South in Melbourne, Morgan McGlone from Belle's Hot Chicken made his own trip to Nashville bringing back the African American specialty spicy chicken to Fitzroy. And just this past weekend, Bondi's Iceberg's held its second Belle's Hot Chicken pop up (the next and final one is January 18th, 2015). We are told that Morgan is in the kitchen frying away and when we arrive just after 4pm (the chicken starts at 3:30pm) the Icebergs bar is already packed. It is a Bondi hipster's paradise with plenty of men with beards and tattooes while girls wear flowing caftans and flower braids in their hair. Ahh Bondi... 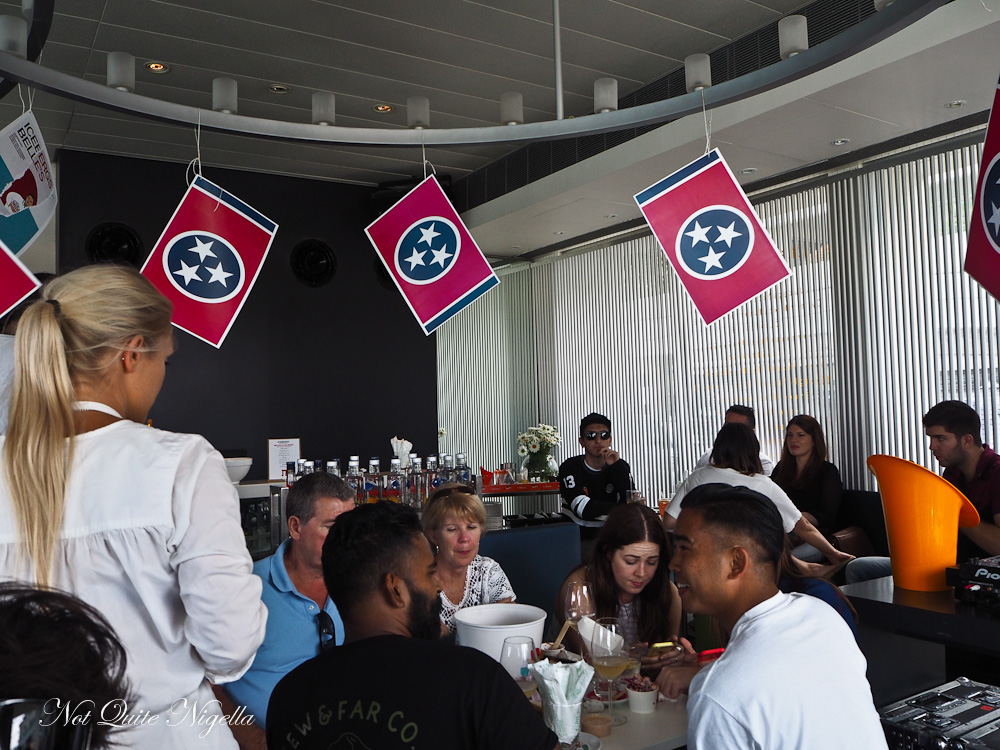 We ask the staff about tables, there are no bookings here and I spot a friend who told us that she arrived at 2:30pm to secure a table (it wasn't too busy then). A staff member warns us that come an hour, the queue will snake around almost to the entrance and during the last pop up, people were scoffing their chicken while standing. While we wait for a table (there's no system, it's really grab one when you see people leaving), I order some chicken. 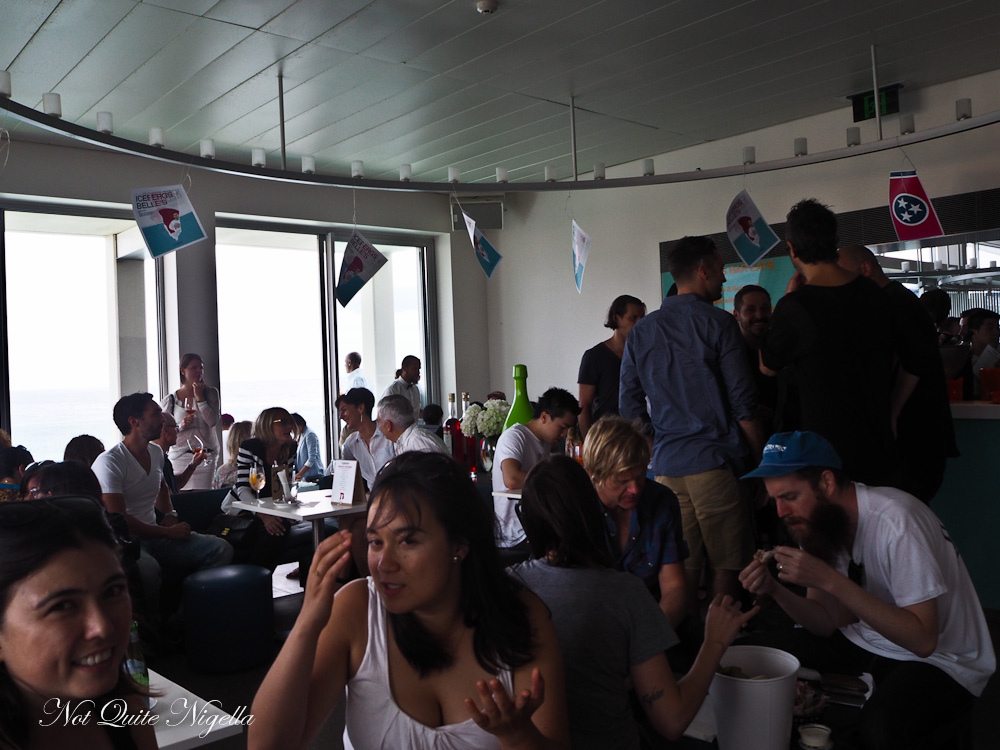 The menu is a truncated version of what is on offer in Melbourne. The "Baller Bucket" bucket of chicken (twelve wings, 2 coleslaw, 1 mash and gravy, pickles, ranch and white bread and a bottle of NV Valli Unite Il Brut and the Beast) is $100 but since it is just Mr NQN and I, we go for two baskets of chicken. 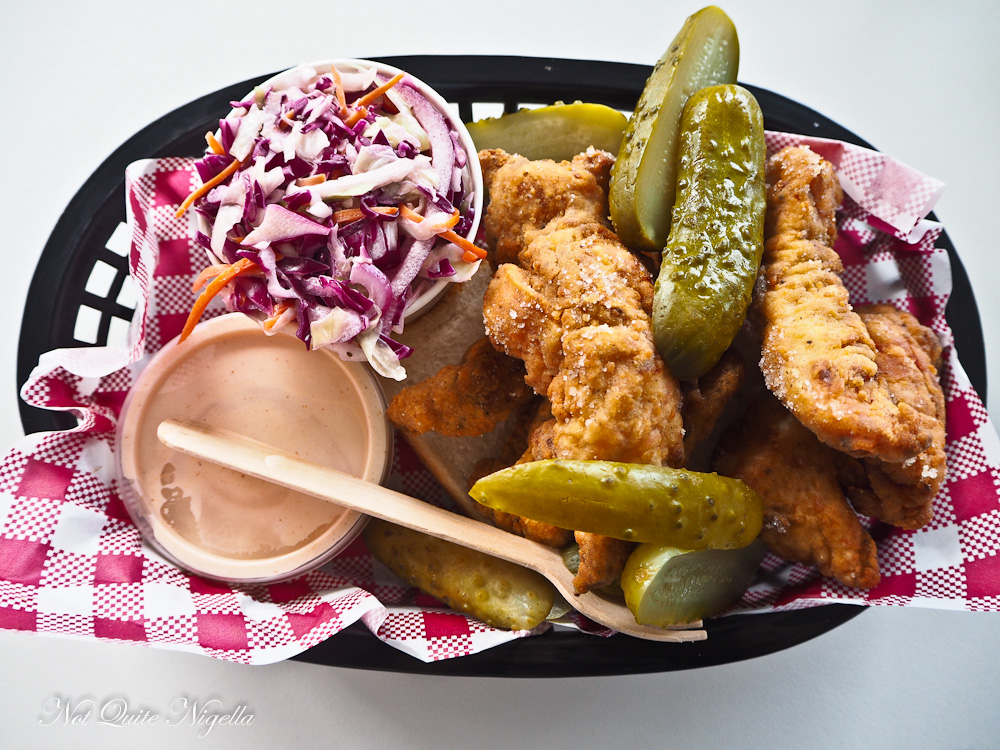 We manage to get a table as a group of four leave and we end up sharing this with others because everyone is pretty chilled and polite. About 15 minutes later our chicken arrives. I start with the milder version - there are three levels of heat, southern, medium and hot and this is the mildest or Southern. The four pieces are a tad on the salty side courtesy of the generous sprinkling of salt and served with a lightly spicy, creamy sauce and plenty of fat pickles and a great coleslaw. Mr NQN likes these as they are less oily than the wings. 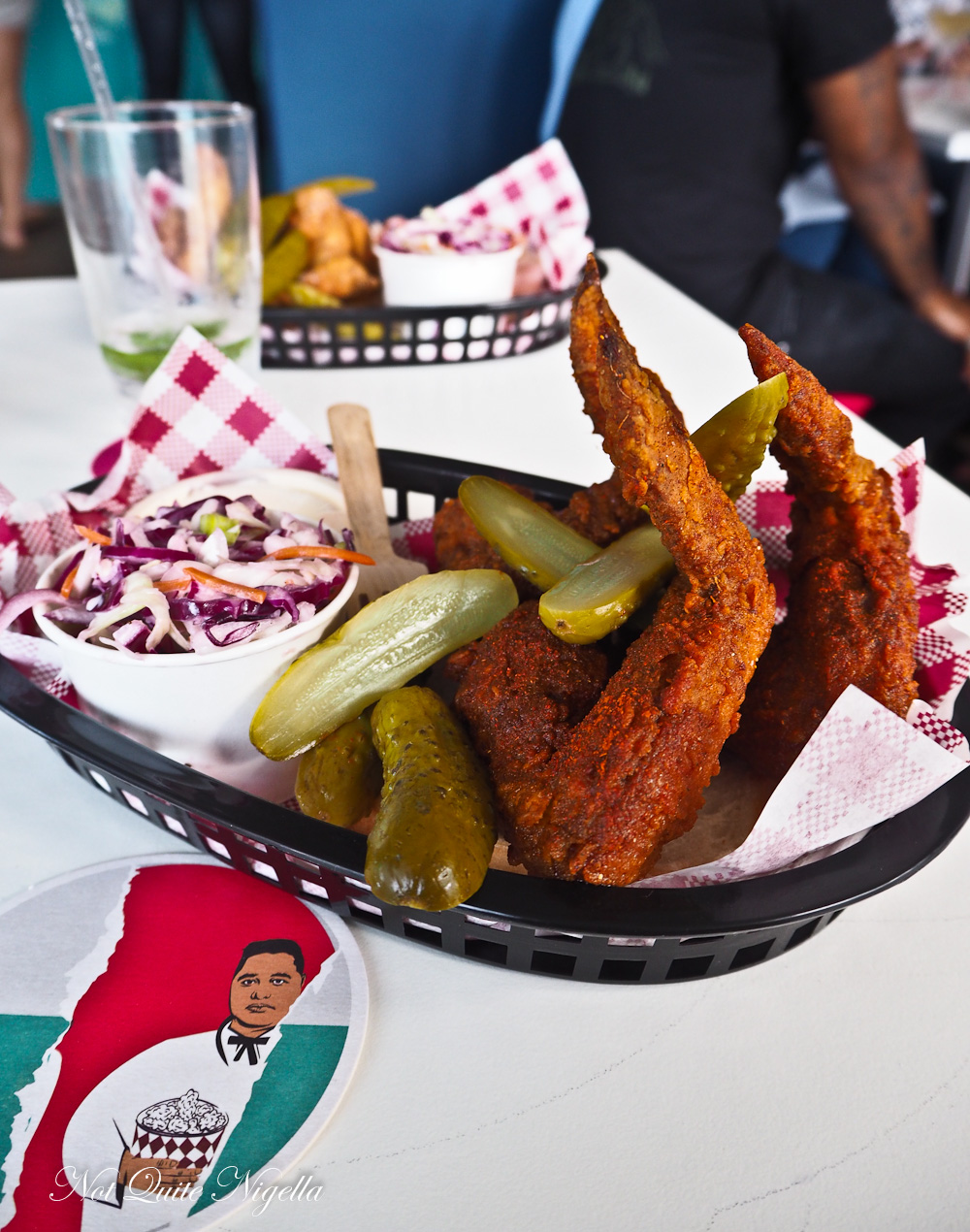 But for me, I love the hot wings. With a dark red crust the meat eases off the bone easily and whilst it is spicy, it isn't infernally so. There are five levels of spice in the Melbourne store going up to "Really F**kin' Hot" and sometimes they bring out a spice level called "Sex Panther" said to be hotter than any other. Nashville hot chicken needs to be cooked fresh to retain the crunch of the crust and here it is dark red courtesy of cayenne pepper and smoked paprika and the chicken underneath is juicy and tender. The napkins and wet towelettes are a necessity but it's best just to hoe in and come up at the end and tidy yourself up then.

There's no dessert and as the crowd swells, we vacate our table. As we leave, there is a steady stream of white jacketed waiters with black bow ties and suspenders brings out buckets and baskets of chicken to the crowd who stand, sit and talk and eat.

So tell me Dear Reader, how spicy do you like your food? Have you ever tried Nashville Hot Chicken?