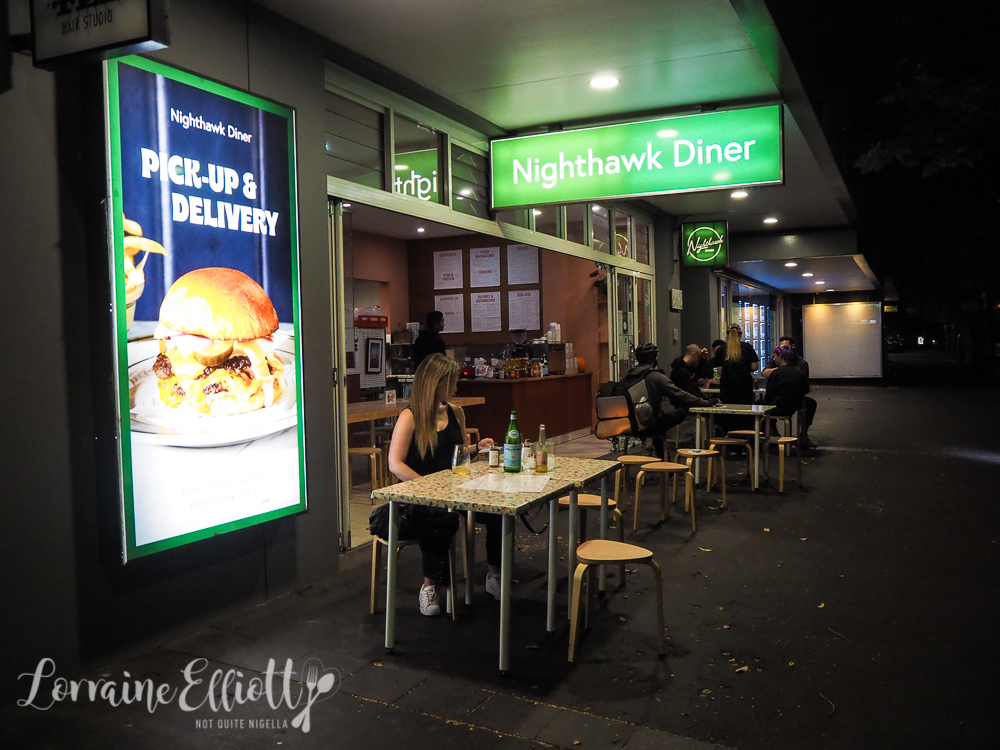 Nighthawk Diner has resurfaced again. The popular diner with a cult following for their sandwiches and American diner food has a new menu including a large section devoted to vegan offerings along with their classics like their Miami Cuban sandwich, Ribwich and Philly Cheesesteak!

You may know Nighthawk either from the fleet of food trucks at events across the country or their former diner in Chippendale. The new eatery in Alexandria is smaller, more simple with an enormous kitchen and a few tables outside. The smaller size is a result of COVID-19's impact on the business. 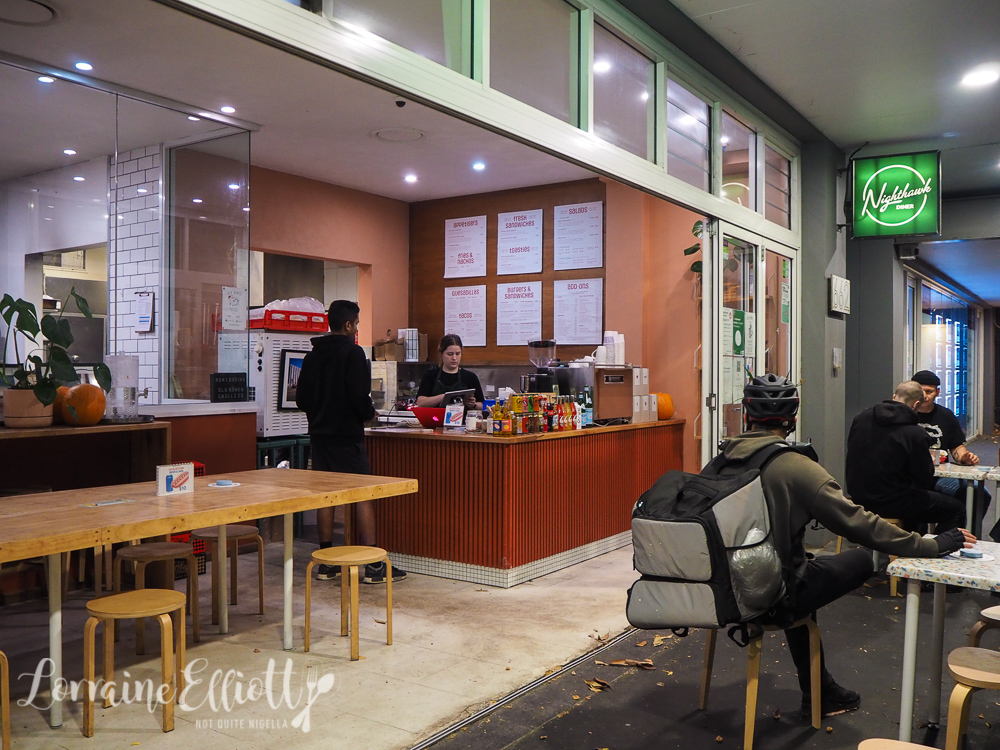 The virus had a devastating impact on Nighthawk and almost immediately 6 months of food truck bookings were postponed and a further 6 months of new bookings vanished. "We were literally en-route to an event and got the call to turn around," head chef and owner Alistair Fogg explains. "So we pivoted and hustled in empty streets and a quiet city to get the prep kitchen open as a ghost kitchen."

Nighthawk's loyal fan base found them even though there was no publicity behind the ghost kitchen. "It was a very strange few months. While everyone was complaining about being bored and stuck at home, we were working like crazy to get the ghost kitchen set up and operational." Now the new location is their new headquarters for the eatery and all of the trucks. 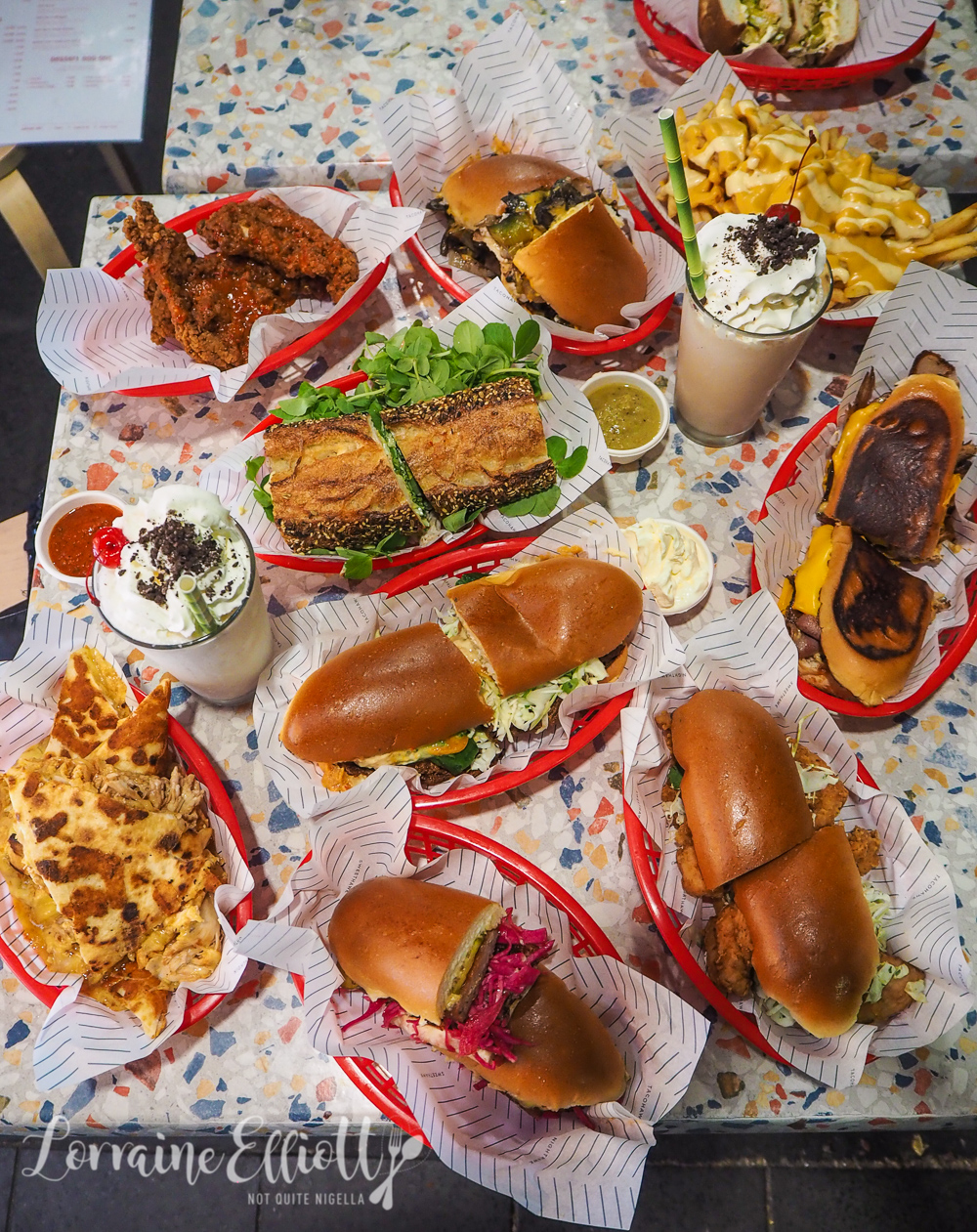 Al grew up in Wollongong where his father owned a small fruit shop. Five year old Al would sometimes accompany him on this 3am trips to Flemington markets twice a week. After apprenticeships in Noosa and Sydney Al headed for North America where he stayed for 8 years working on the super yachts of billionaires like Steve Wynn and Frank Fertitta. He lived in one of Fertitta's casinos in Vegas, doing stages at some of Fertitta's favourite restaurants like Spago and Nobu Cipriani and also worked at all the restaurants in his casinos.

"Cooking beach barbecues in the South Pacific on deserted islands and trying to source billionaire friendly food in the Galapagos was something I’ll never forget and taught me that no matter what the challenges, if you just breathe, you can work it out," says Al. 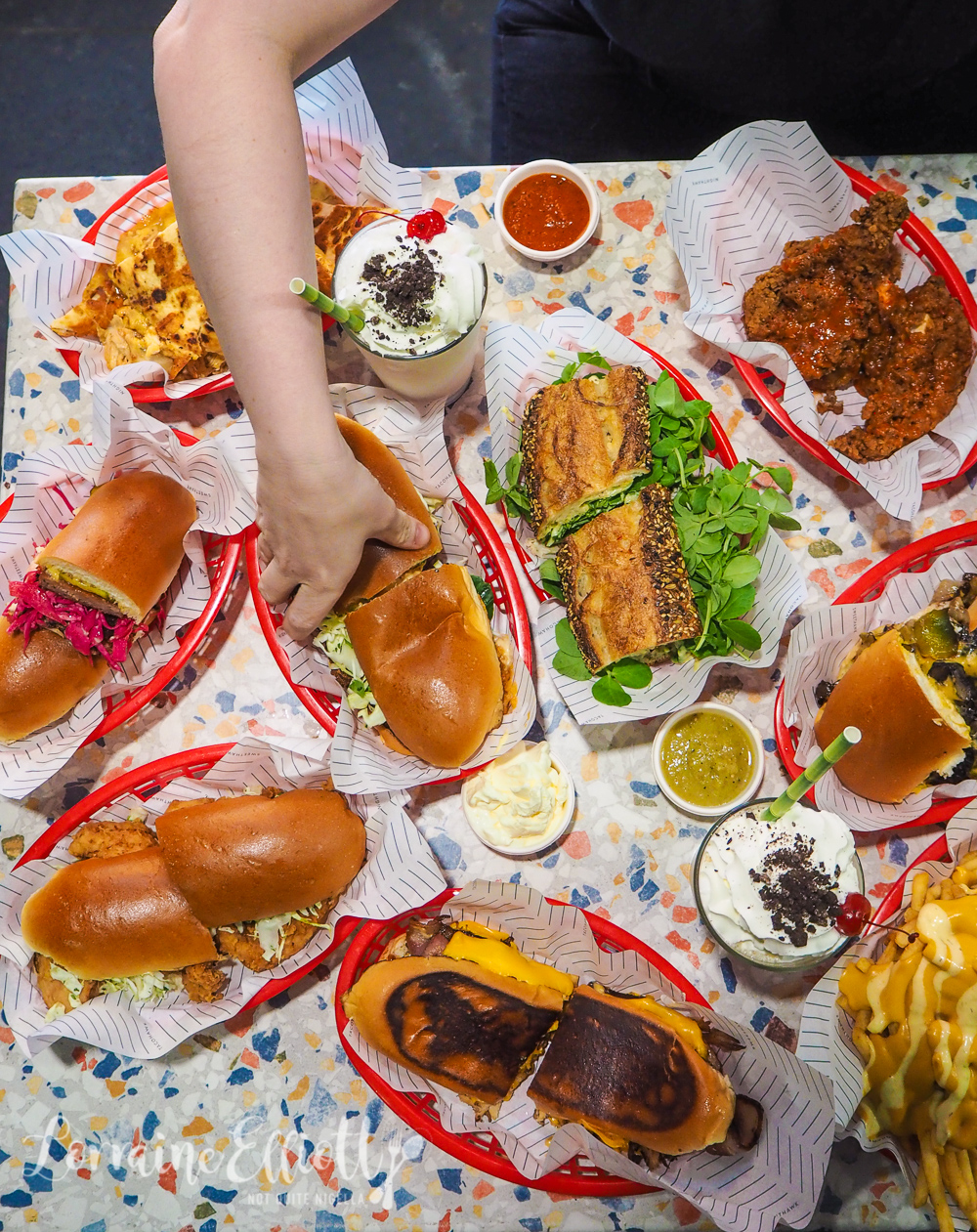 Takeaway is clearly popular at Nighthawk. On the night that we visited we set up a table and watched delivery drivers picking up meals and ferrying them to customers. Many of the sauces and ingredients are made in house from the smoked salmon to the Maltesers that flavour their milkshakes. 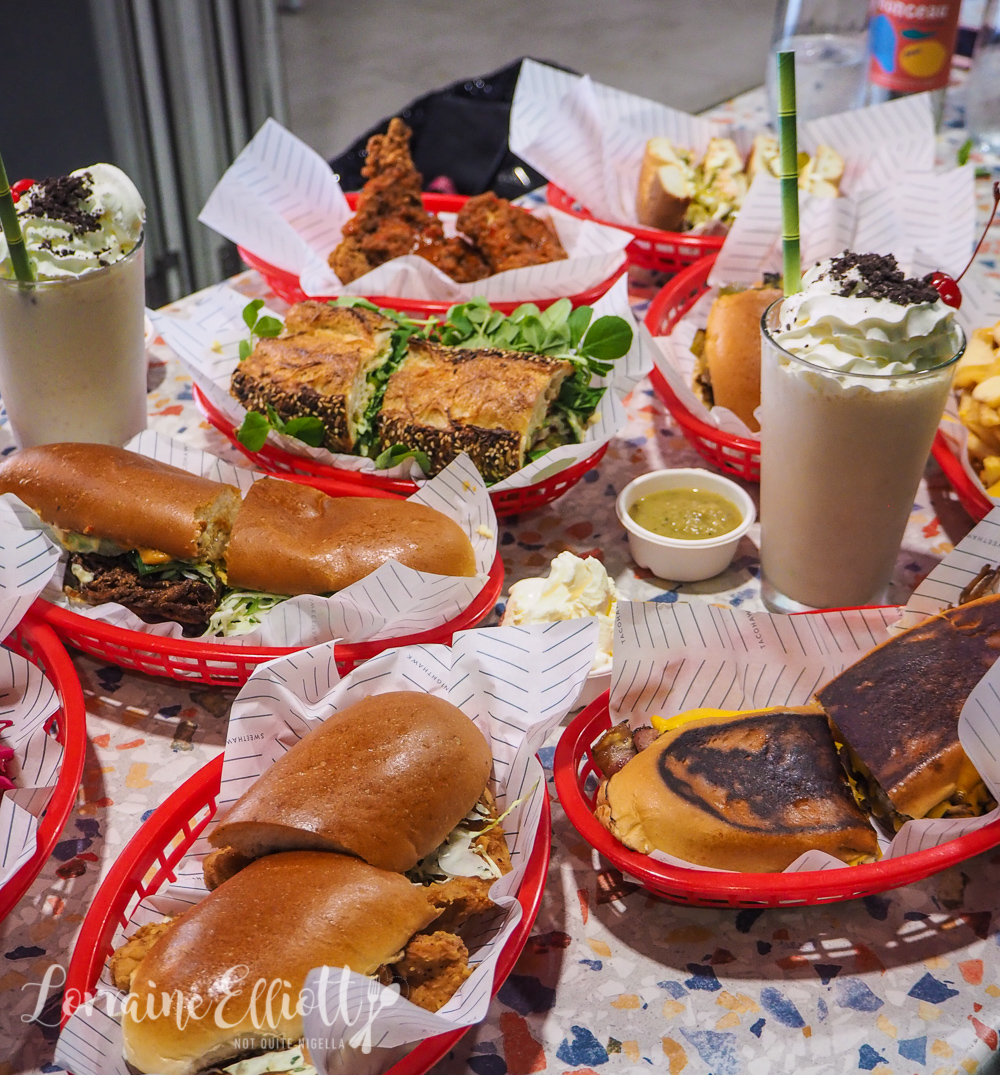 We start with milkshakes, all topped with whipped cream and a cherry. The vanilla malt thickshake is perfection, malty and vanilla-ey with their own home made Maltesers. It's not too thick and not too thin, and just right in texture. The peanut butter and jam thickshake is made with smooth peanut butter with strawberry jam, milk and vanilla ice cream and I love the touch of salt in it to balance the sweetness. 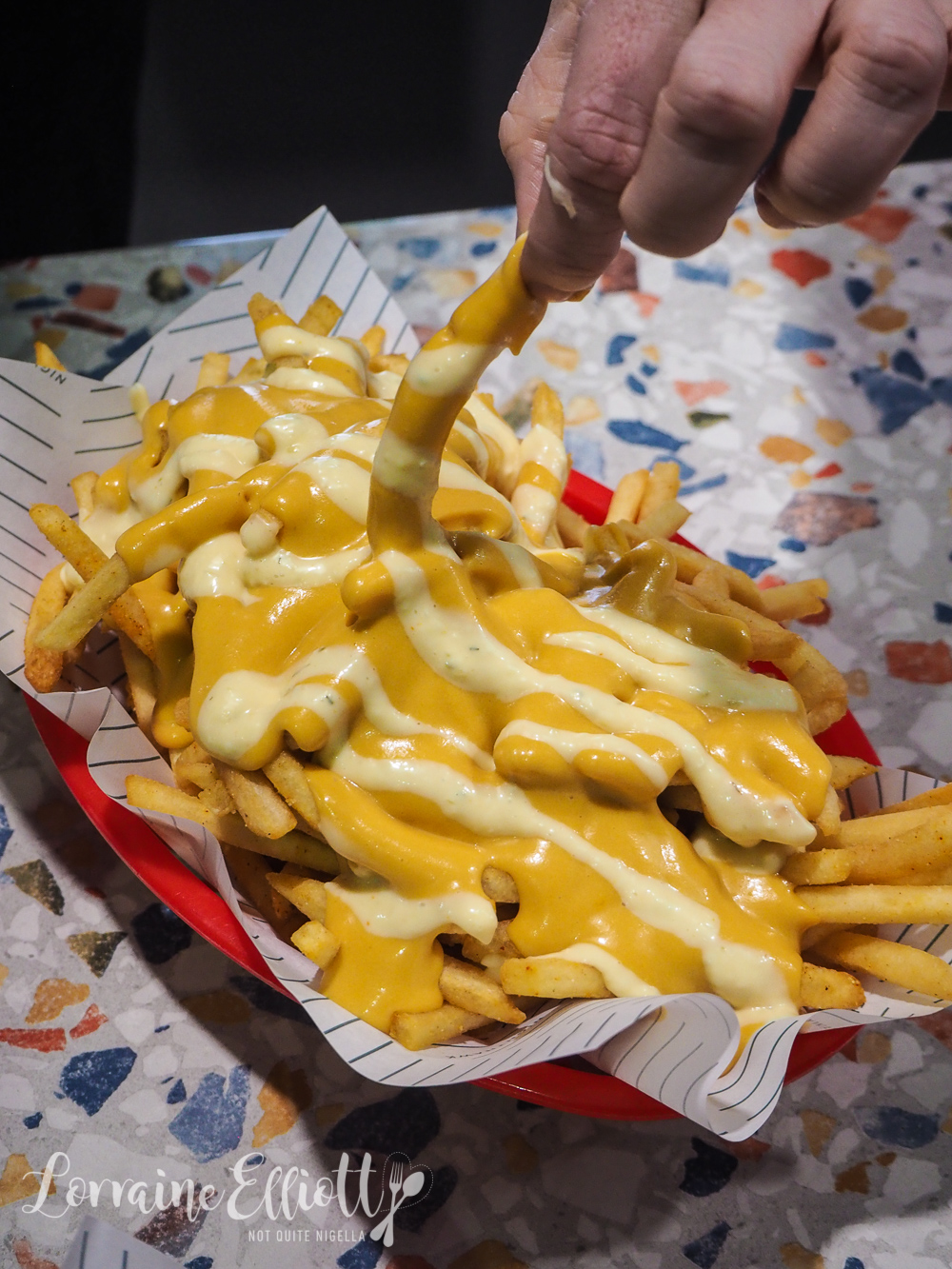 You know when you get so distracted by a dish that you have to be pulled away from it? These vegan cheese fries. I think I actually prefer this vegan cheese sauce to regular cheese sauce. The main ingredients are potatoes, sweet potatoes, carrots, grilled onions and garlic and it's so silky smooth and delicious. I'd buy the sauce if they bottled it. 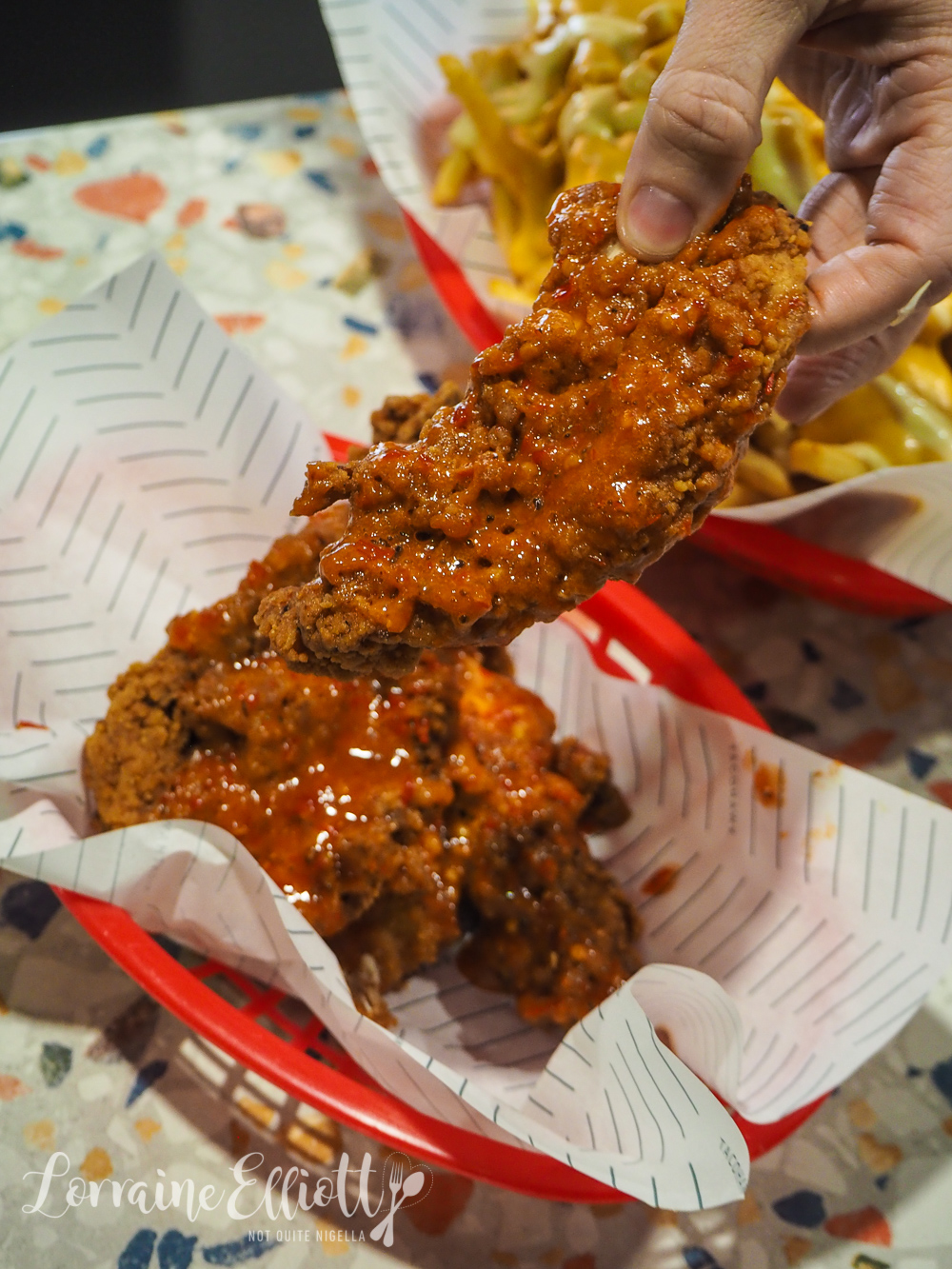 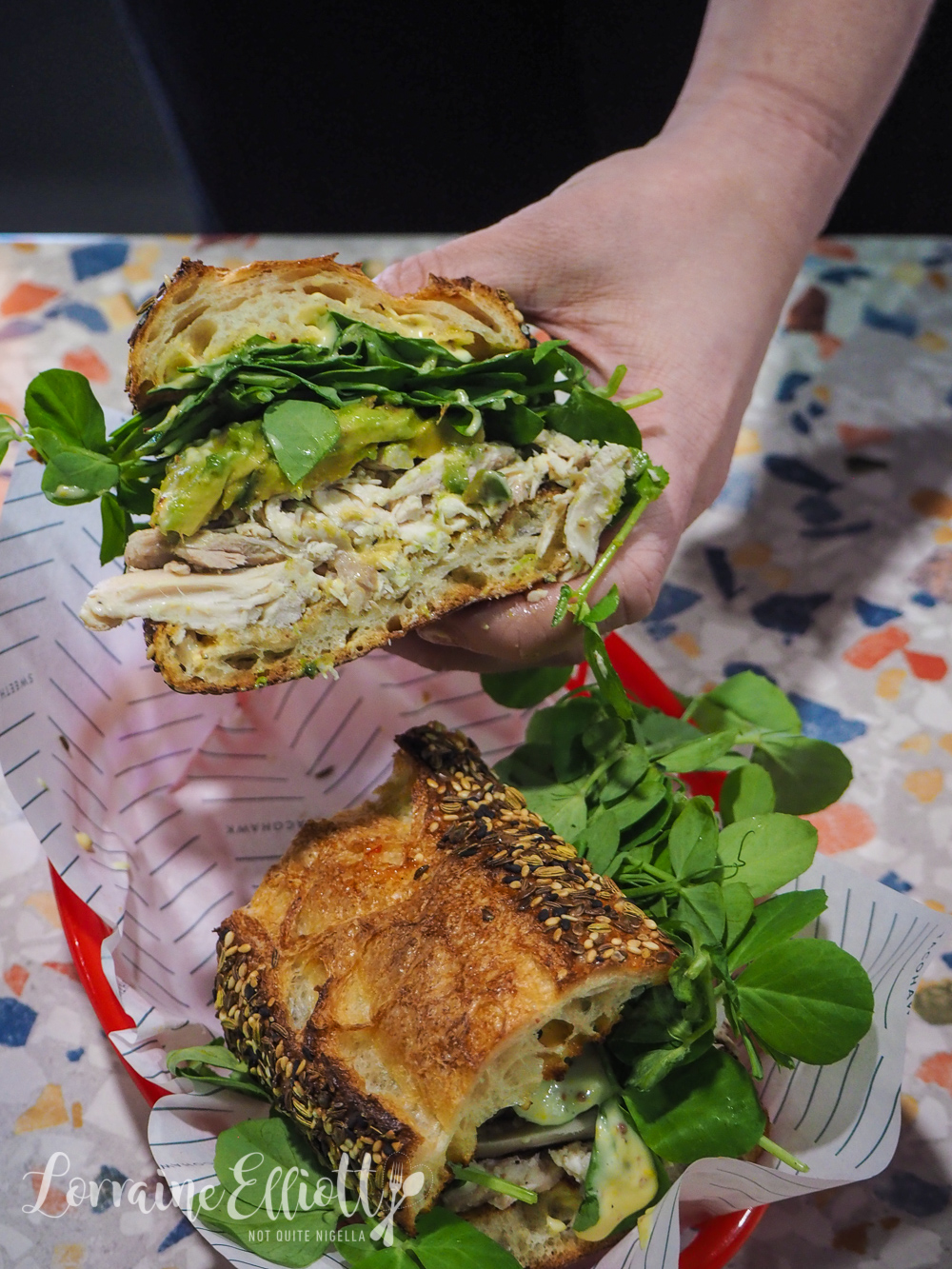 We actually ordered the following two sandwiches from the lunchtime menu as both Laura and I adore chicken sandwiches and baguettes. This is a seeded Brickfields baguette filled with poached chicken, avocado, snow pea shoots with a wonderful creamy dill and white wine mayo. The mayonnaise gives it a great flavour that makes it a cut above a regular chicken baguette and I also like the fennel seeds on the baguette with the chicken. 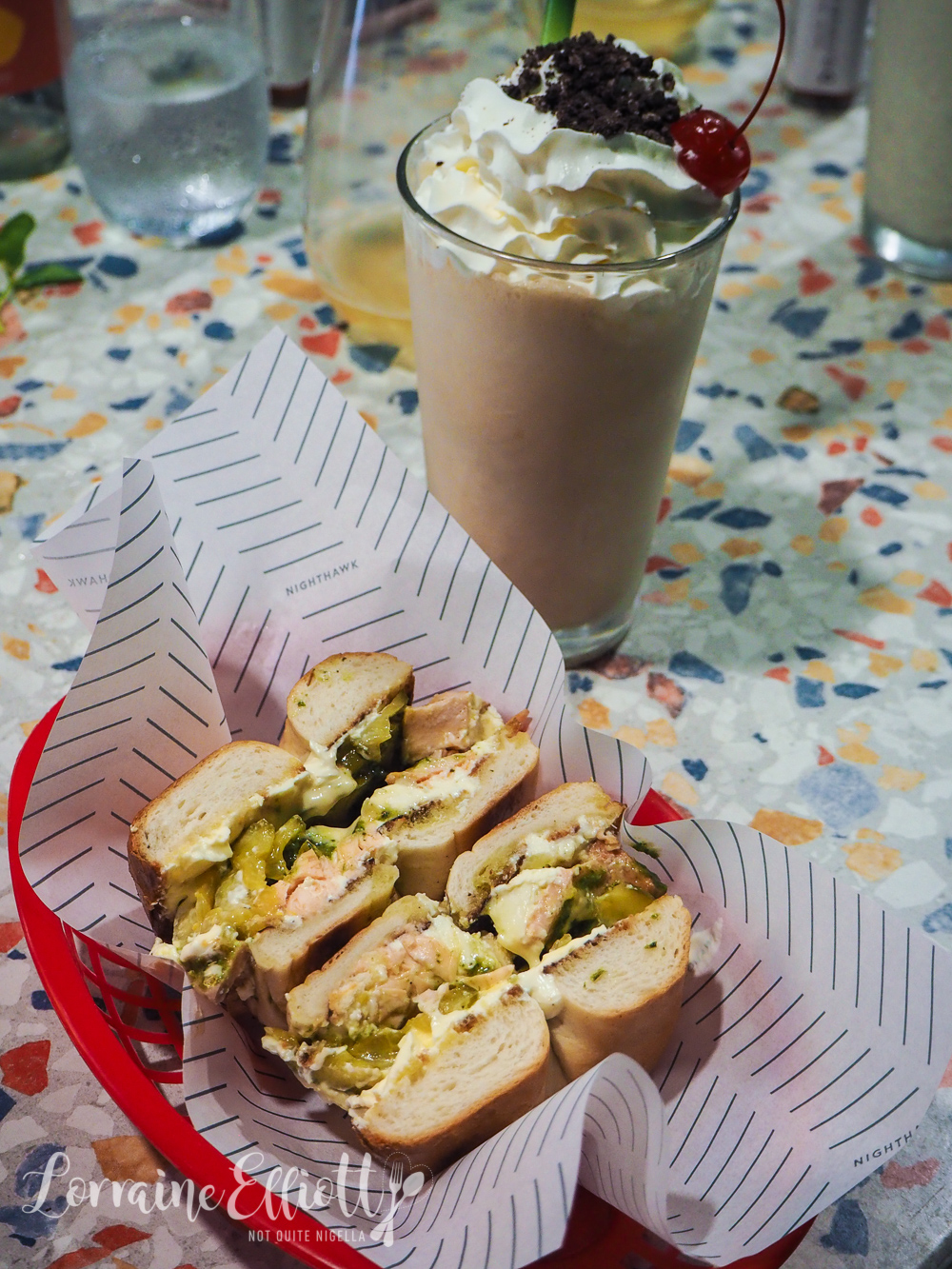 We wanted to try the bagel as they hot smoke their own salmon here. Al brines the salmon overnight with a sugar salt brine and then uses hickory to smoke the salmon. It's a seeded Brooklyn Boy bagel filled with oven smoked hickory salmon, butter pickles, cream cheese, caper pesto and spring onions. Again it's the extras on this like the caper pesto and generosity of filling that make it so much better than just a regular smoked salmon bagel. 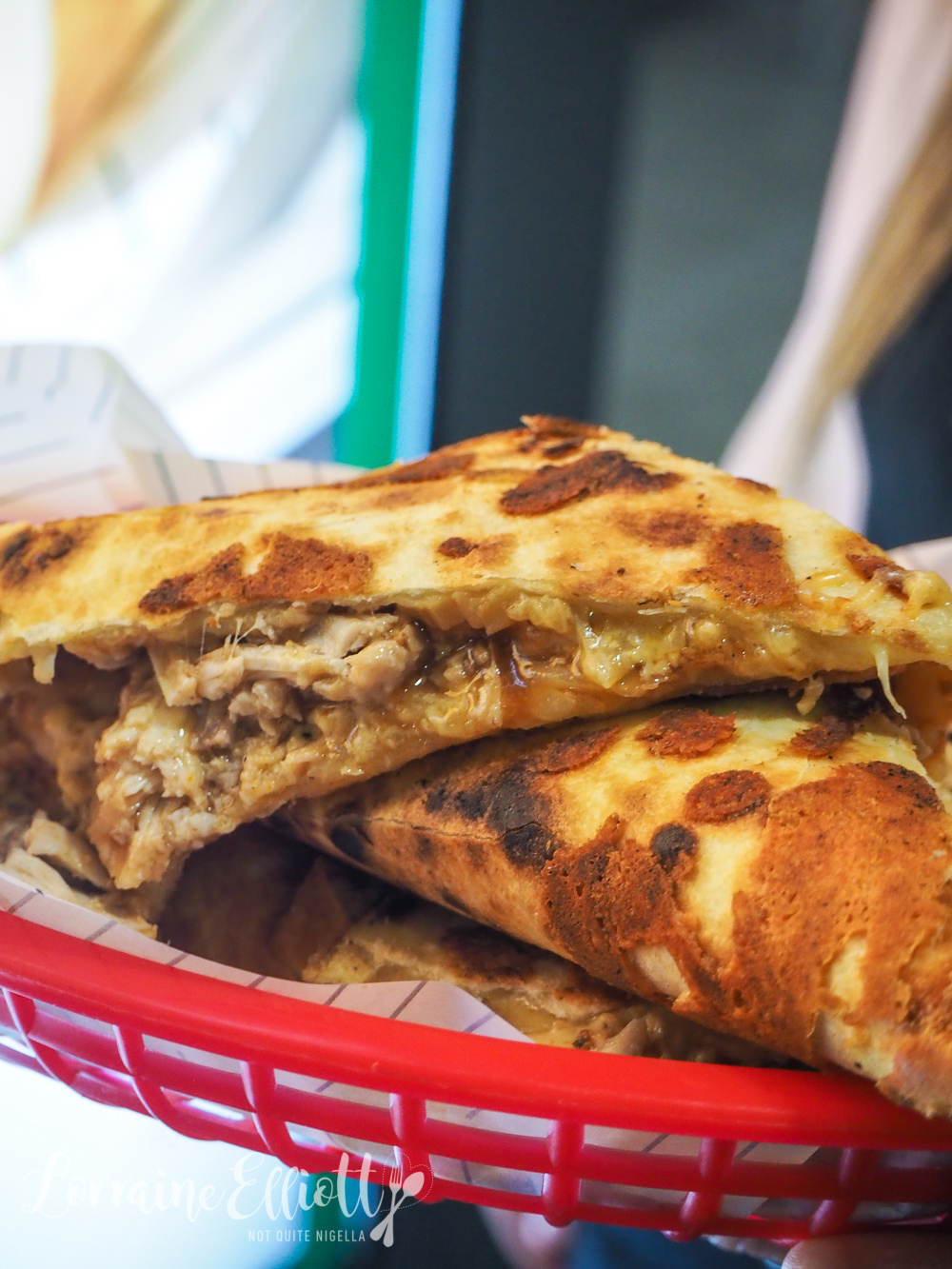 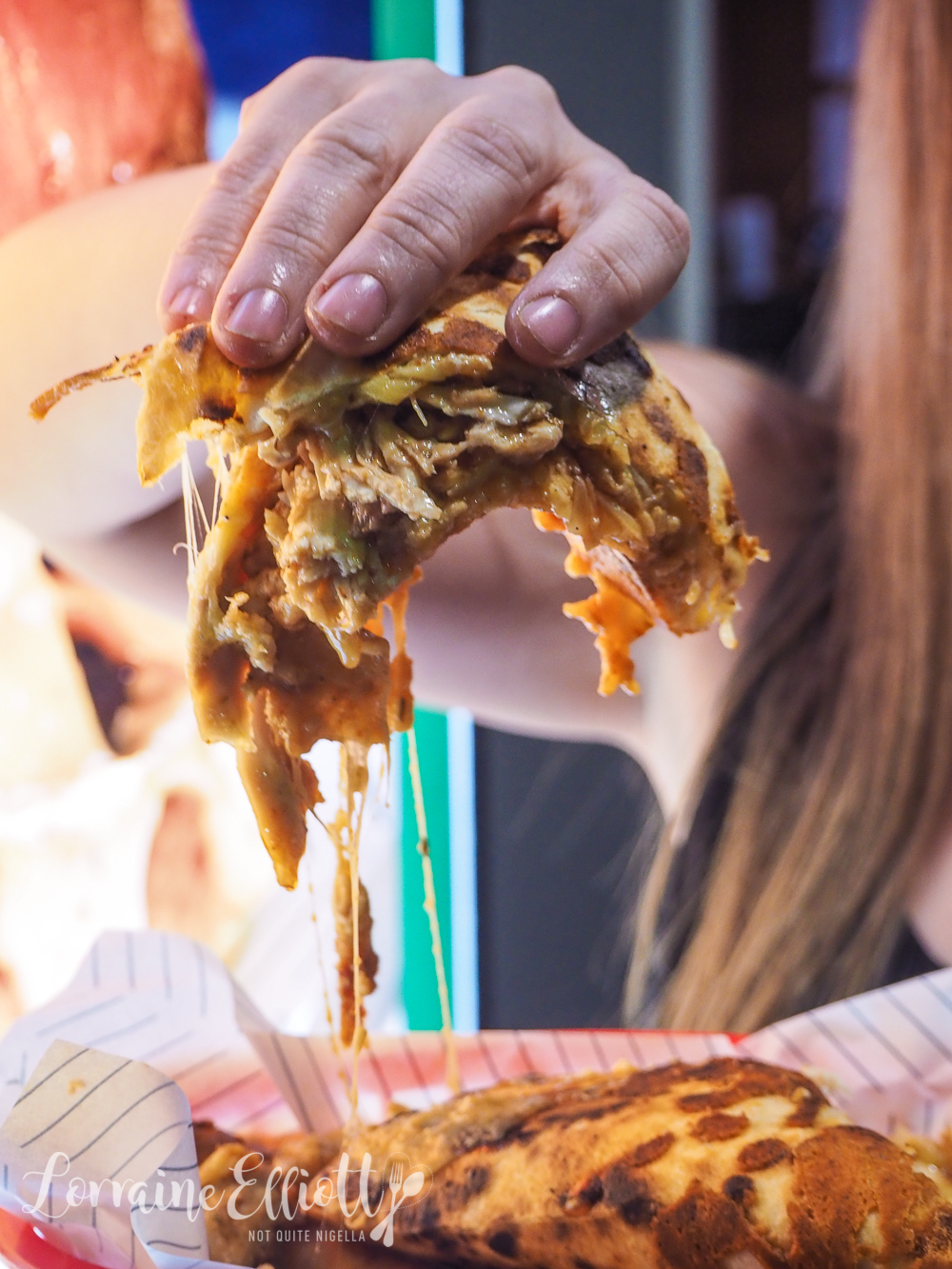 This chicken quesadilla is ridiculous (and we swapped it from the slow cooked brisket as Laura doesn't eat beef). It has Cheddar and Monterrey Jack cheeses, smoked cheese sauce, grilled onions and Nighthawk BBQ sauce. I can't stop eating it despite how much we have ordered. Yes it is wet and it is drippy (please understand that's not a negative at all) and what's not to love about a quesadilla that's made up of so much cheesy goodness. There's also plenty of chicken in it and the barbecue sauce gives it a nice sweetness. I would eat this again in a heartbeat (I'm drooling thinking about it). 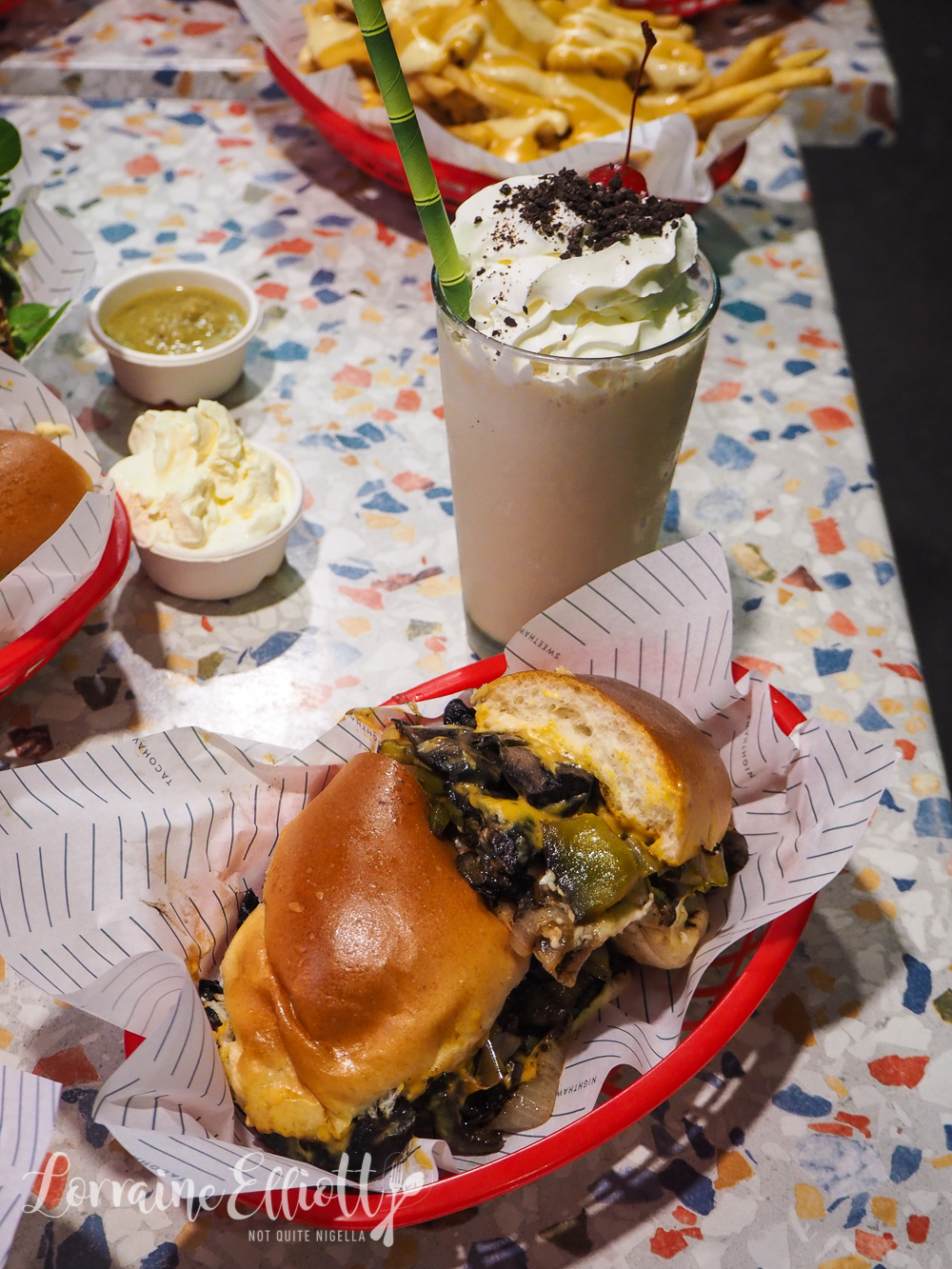 I was really interested in trying their vegan version of the Philly cheesesteak where mushrooms take the place of the steak. It's made with slow roasted field mushrooms, house-made vegan smoked cheese sauce, green capsicum and onions on a hoagie roll. And while the mushrooms don't really simulate the thinly sliced steak in a cheesesteak as they're thicker, they're still very tasty and meaty in texture. 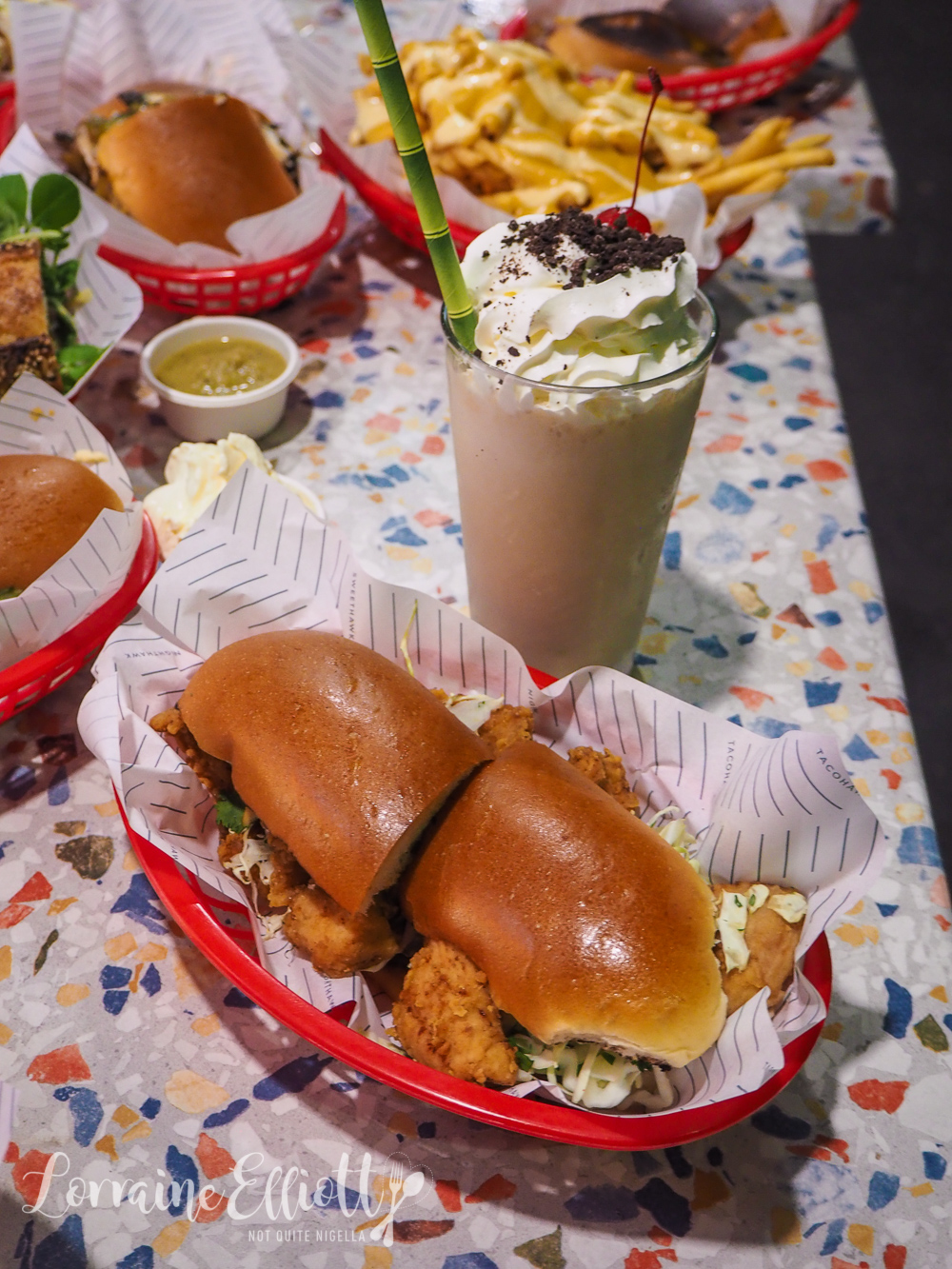 The fried chicken sandwich is Cajun spiced fried chicken breast with herb slaw & Nighthawk sauce on a hoagie roll. I'd love a bit more sauce on it but I do prefer my sandwiches quite luscious. 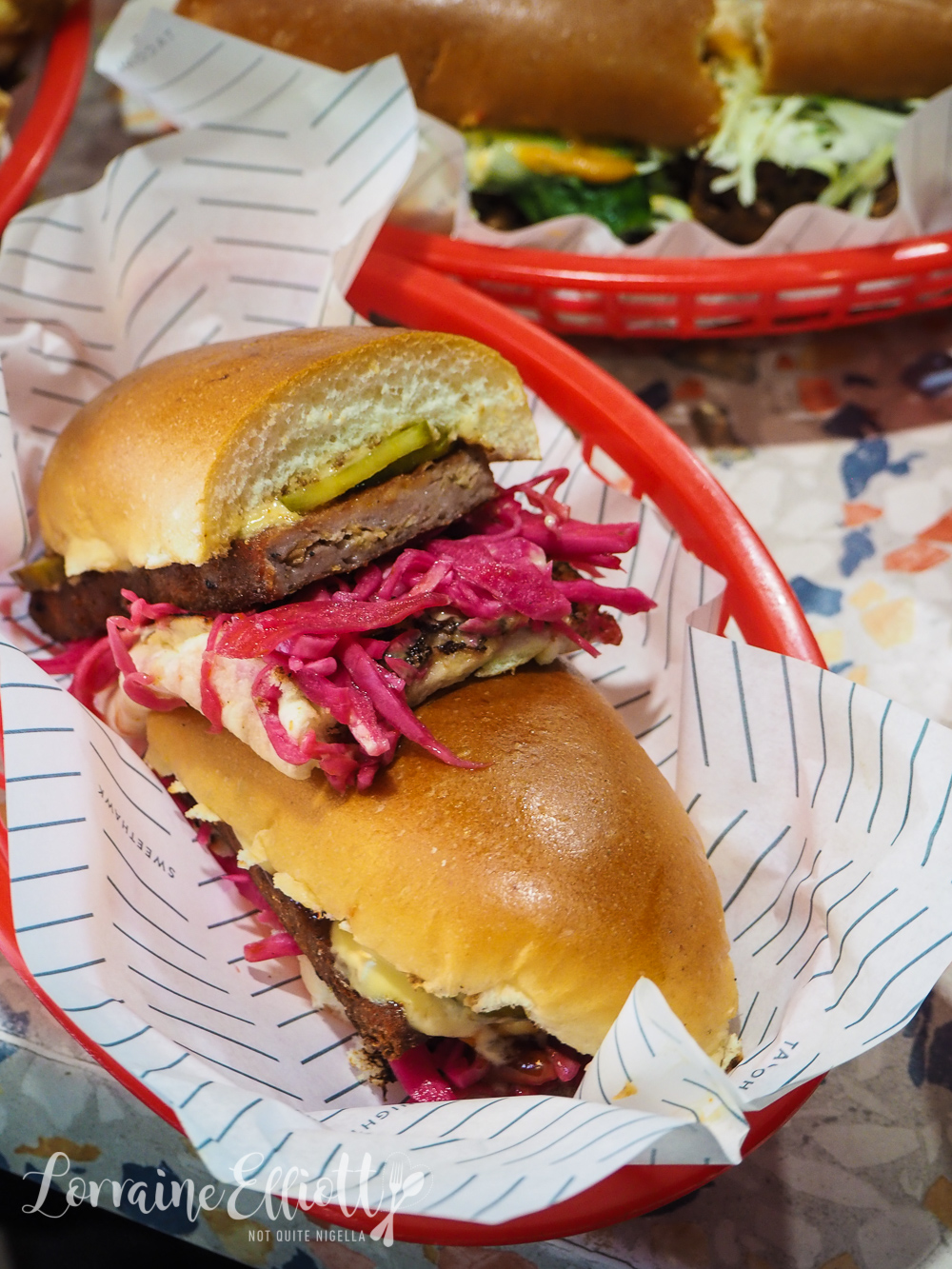 The Southern Ribwich, one of their most popular items, is filled with a boneless pork rib patty, their sharp red coleslaw, pickles and a smoky BBQ sauce on a hoagie roll. This has a nice sharp, piquant flavour to it to balance the rich pork rib patty. Al explains the process to make the patty, "I spice and sous vide the pork ribs for about 12 hours at roughly 82°C. Then I strip the meat off the bone and mix with a white pepper sausage farce. Then I put it back in a vacuum seal bag and sous vide again to cook and set the patty. Once cooked and cooled, we slice, fry and season." 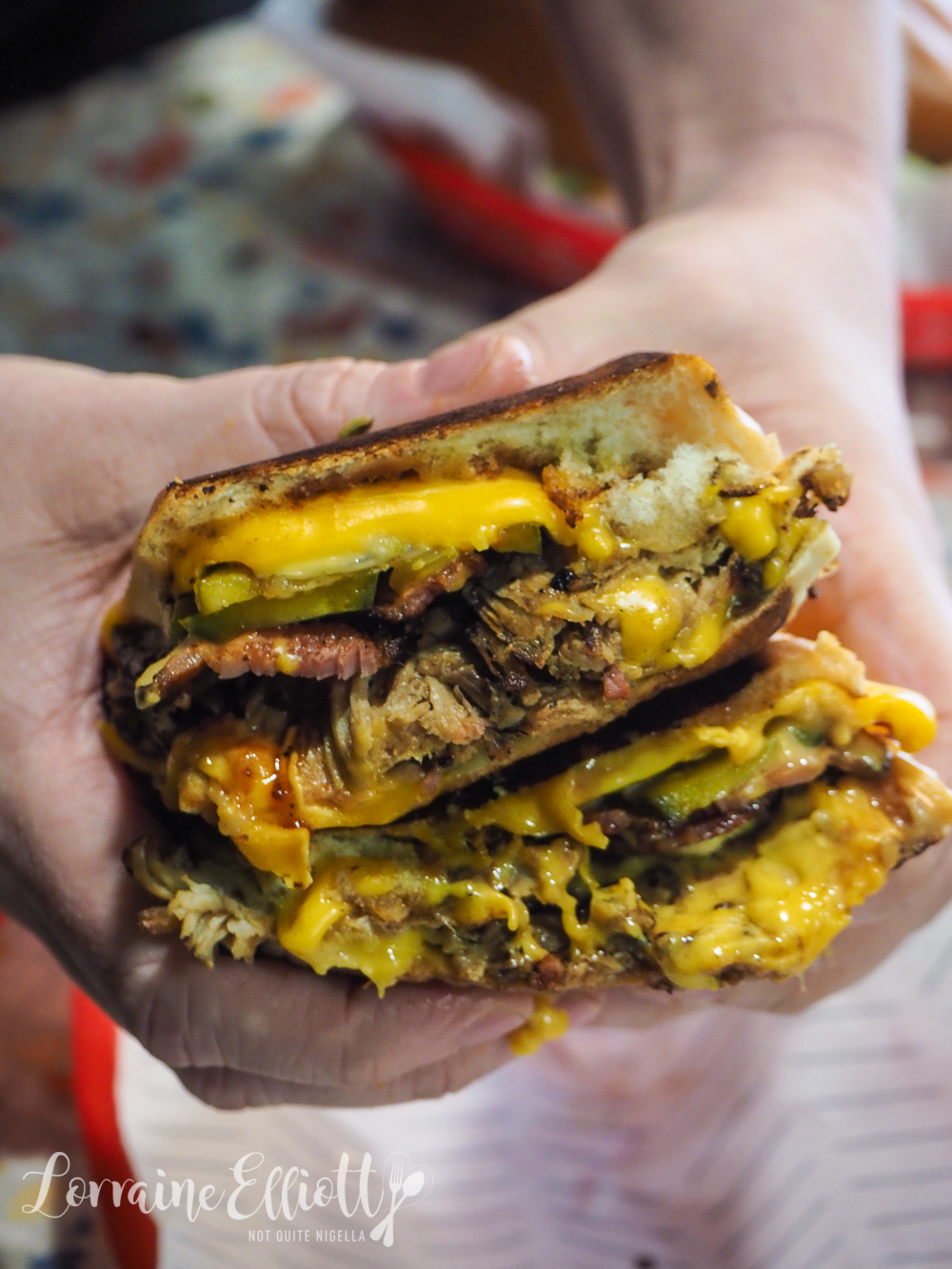 The first time I ever ate at a Nighthawk truck was when I ordered a Miami Cuban sandwich. It's their version of a Cuban sandwich which is a classic Miami offering. The Nighthawk version has slow cooked citrus pork, maple smoked bacon, housemade butter pickles, American cheese and their own barbecue chipotle mayo on a hoagie roll. This sandwich has a cult following and once you taste it, you can absolutely see why. 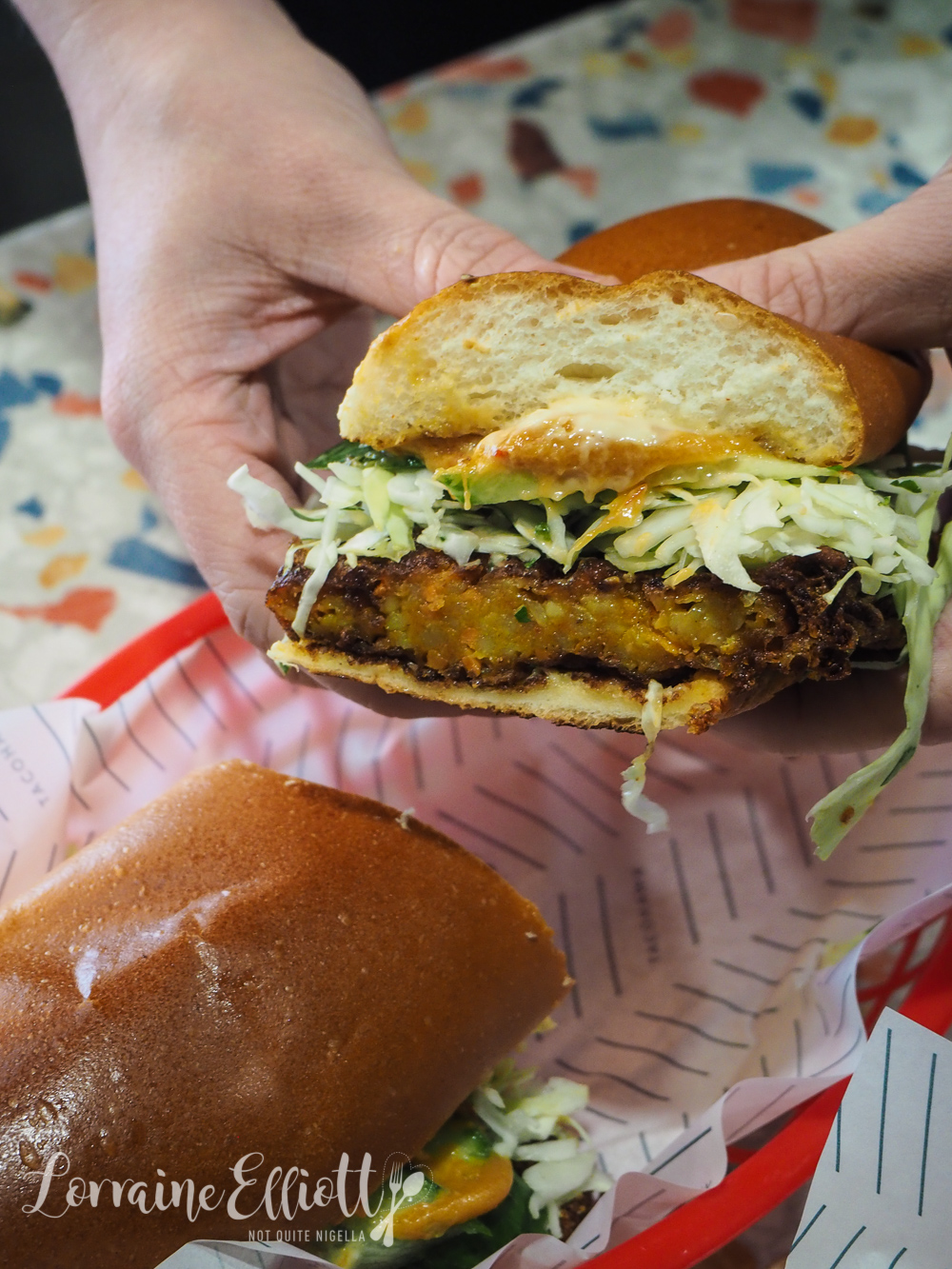 The golden potato katsu sandwich is one of their vegetarian offerings filled with a super crunchy fried potato latke, katsu curry sauce and sliced cucumber furikake slaw on a hoagie roll. The curry sauce is a surprise albeit a pleasant one and the whole thing has plenty of flavour. 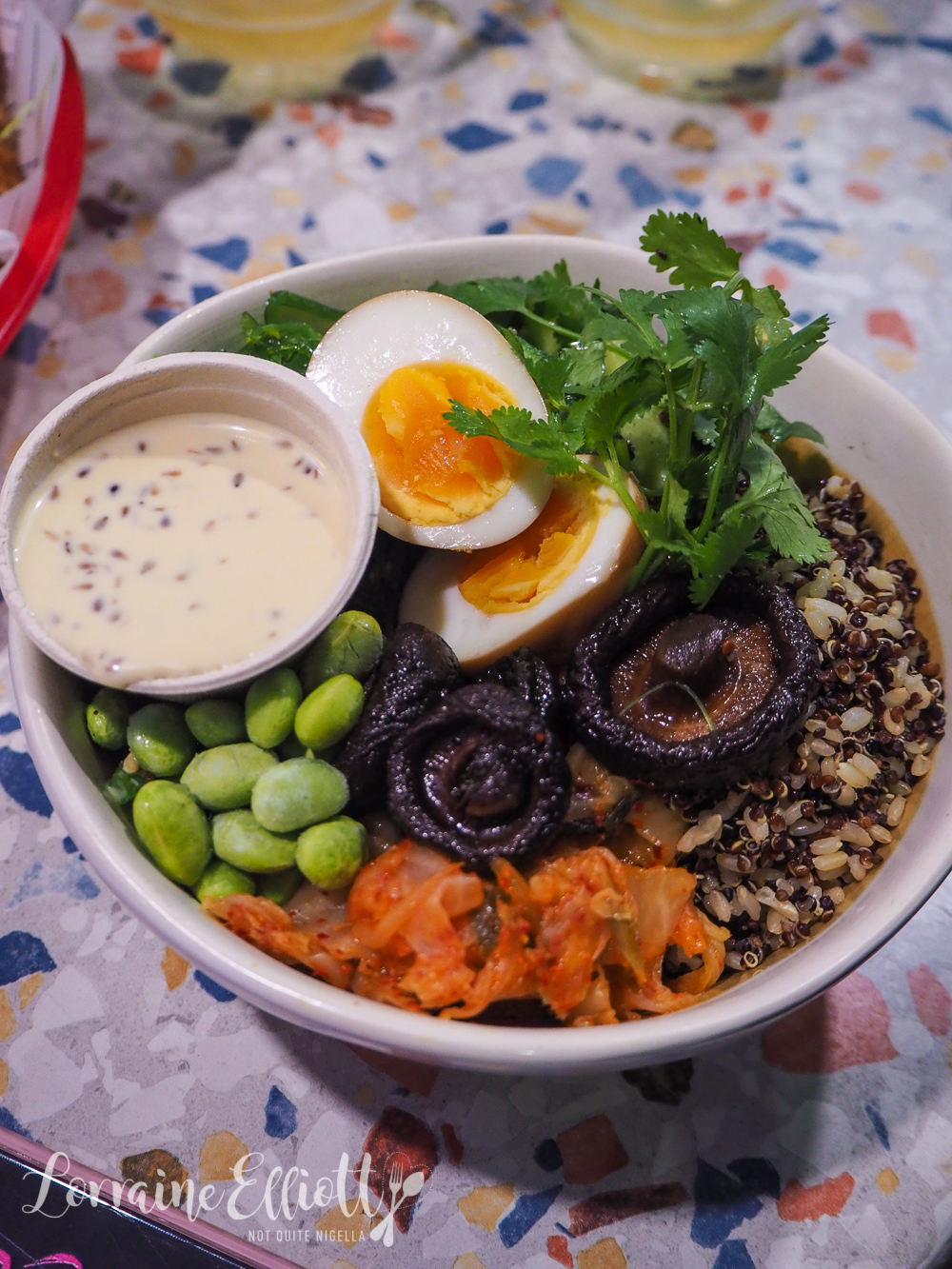 I know you're looking at me like "Girl, don't you ever eat vegetables?". Yes I do and here they are. It's the Tokyo Tummy salad which can also be made vegan. It's brown rice, furikake cucumber, seaweed, edamame, kimchi & ponzu flavoured onsen egg, topped with shitake mushrooms & a yuzu miso dressing which is wholesome and very tasty. It also nicely cuts through the richer items in the menu. 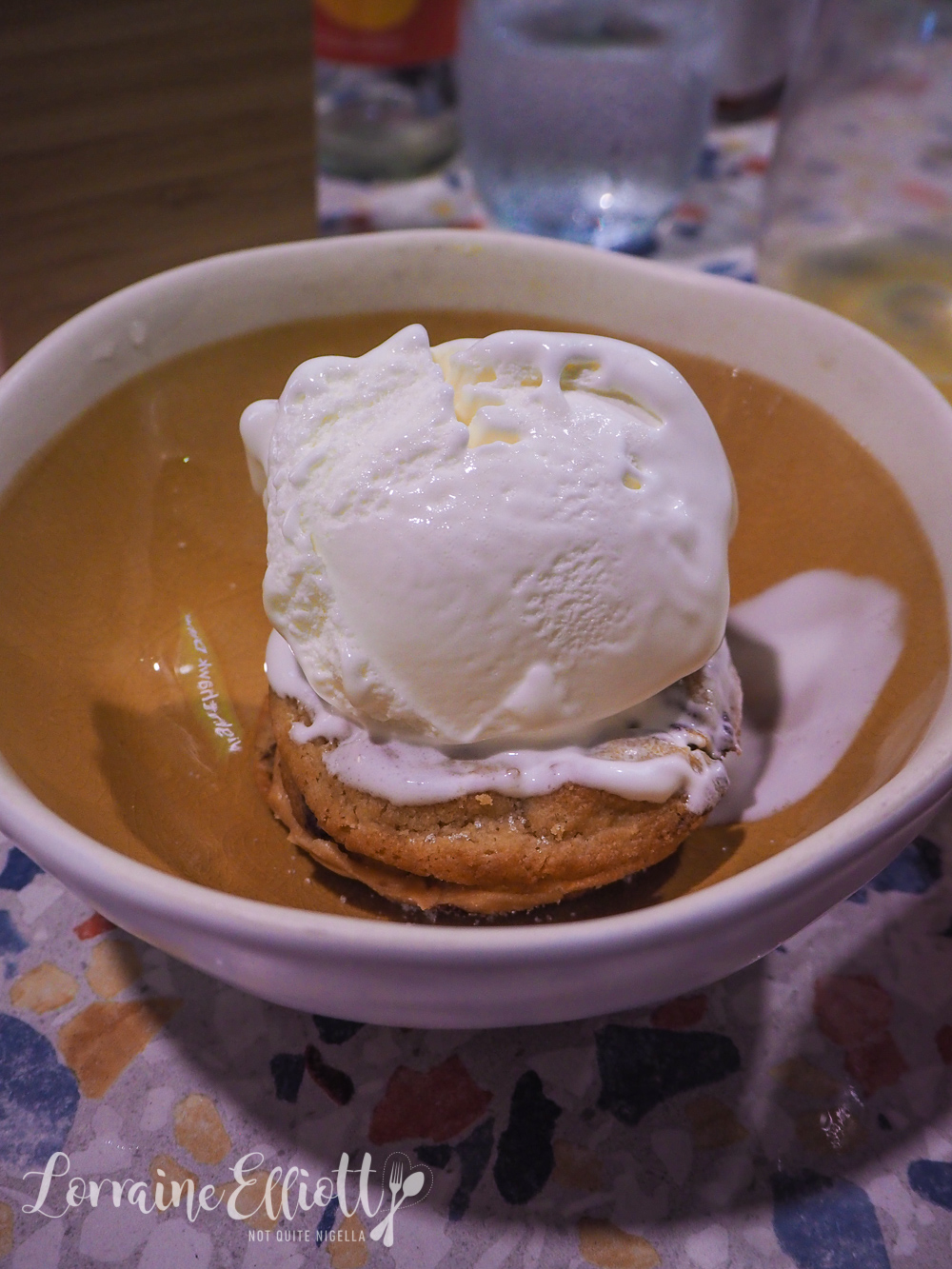 Alas the soft serve machine is on the blink so much of the dessert menu isn't available. Usually the cookies are ordered takeaway so he pops some ice cream on the bowl on top of them. The cookie is a delicious soft and chewy peanut butter and chocolate chip cookie wedged together with peanut butter. Heaven.

So tell me Dear Reader, do you have a favourite sandwich combination? Which sandwich appealed to you the most? Are you eating in or doing more takeaway nowadays? 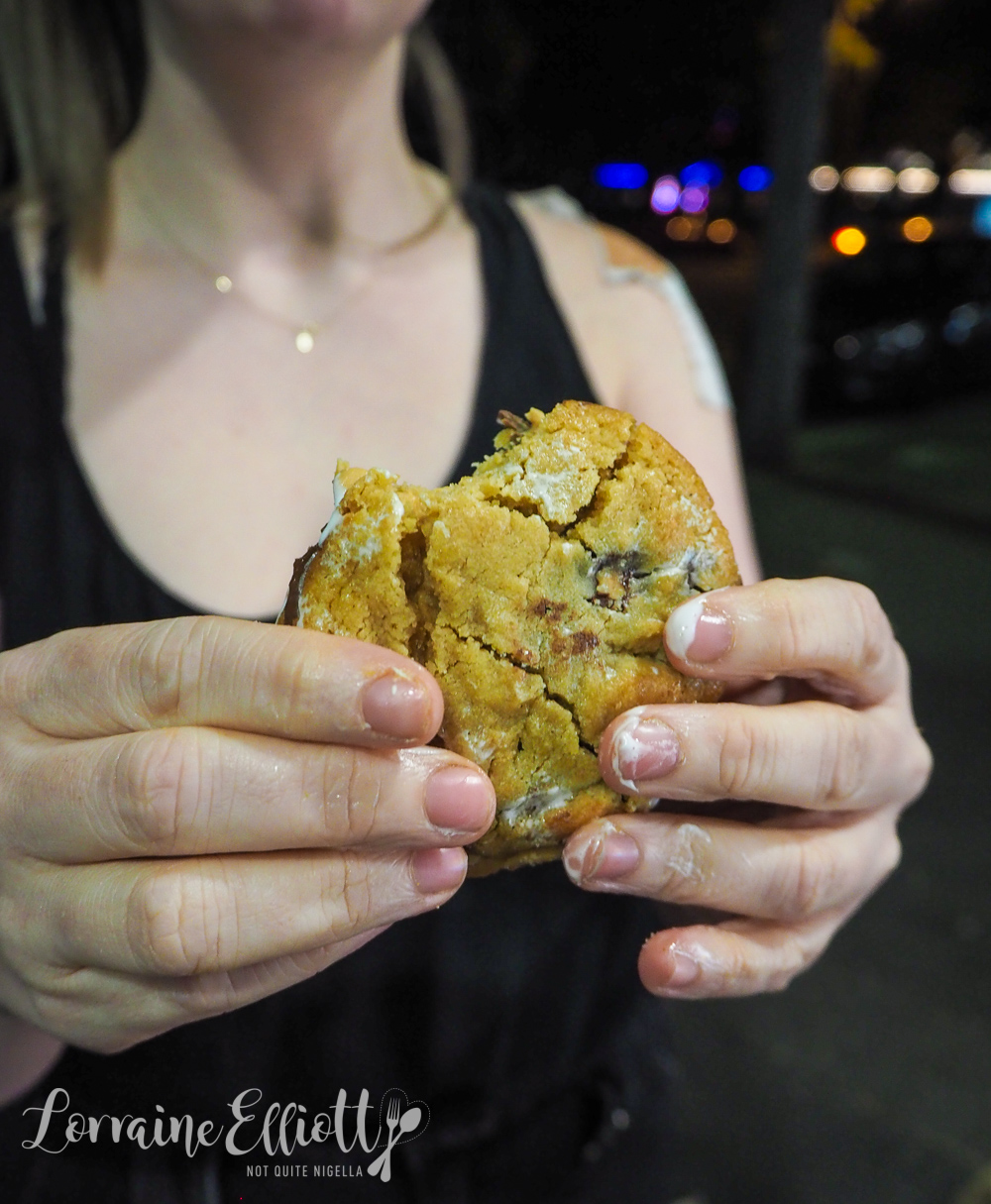