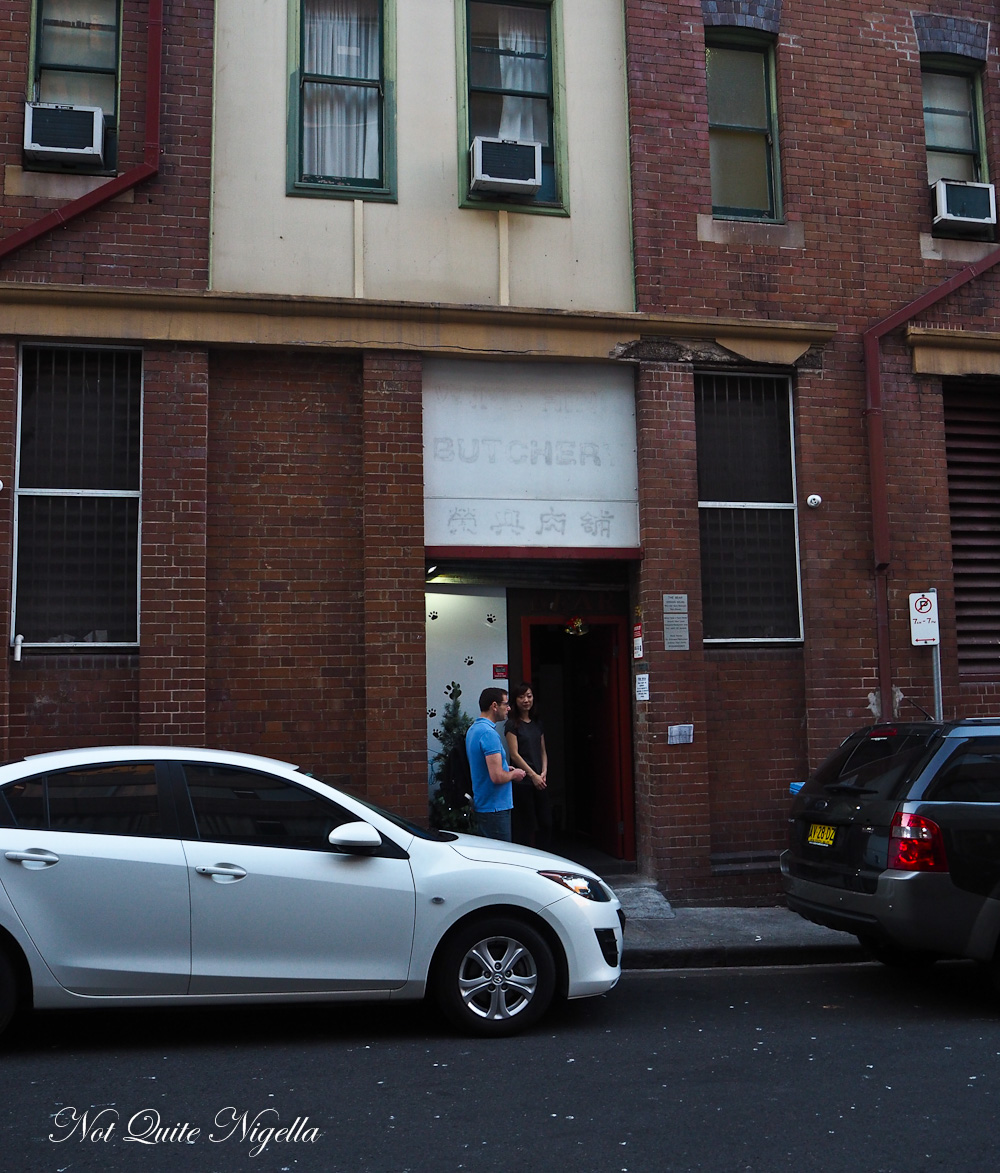 A small bar situated in Sydney's Chinatown, The Bear serves "Scandinavian" style food and snacks as well as cocktails. It is a clever use of space where a cake shop by day is turned into a bar at night. It's so dark inside that menus require lights to illuminate them but inside the vibe is fun with crushing closeby tables.

Thomas Lane is not one of the more salubrious laneways in Sydney. That's not to say that it isn't without its own brand of charm. The casual Uighur restaurant on the corner has grapevines on the ceiling and a violinist sitting in the corner on a chair. Steam rises out of the grills for the back of the restaurants that line Ultimo Road. A blue tarpaulin covers an entire door and enormous seagulls perch on the cars parked in the laneway. 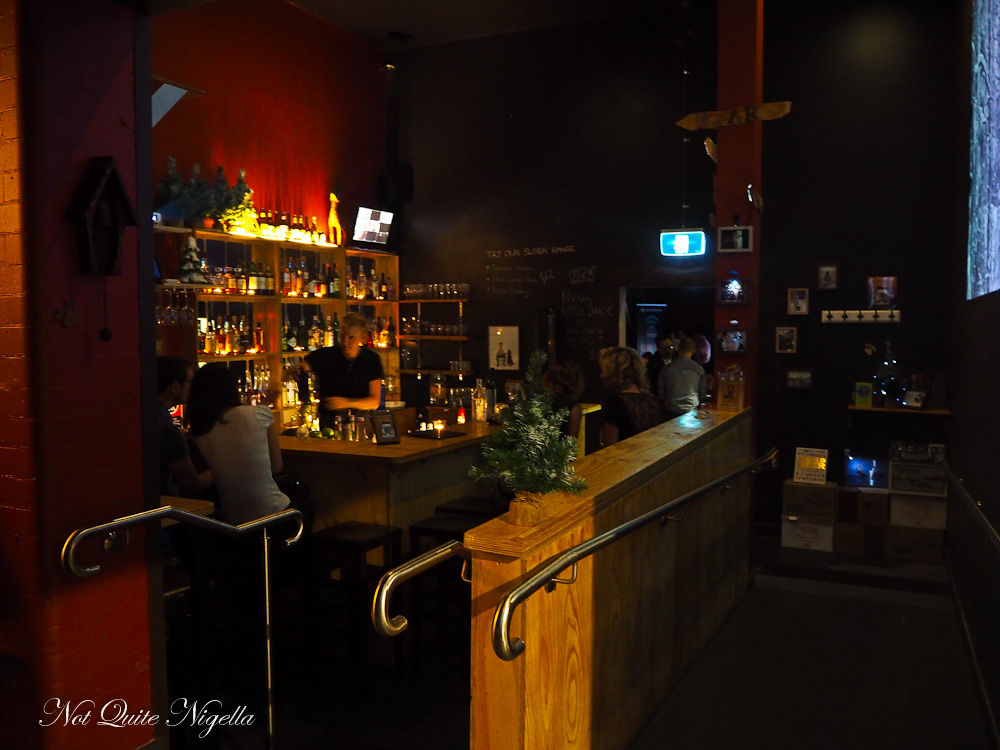 We're running about 15 minutes late (Friday night traffic) but when we arrive at The Bear, we are stopped. Apparently they are at their capacity (51 people) and we have to wait to get in. I message Louise and Viggo who are inside holding a table for us and we wait for two more people to leave. Just opposite a man in chef's whites and hat pulls noodles through a light cloud of flour and we entertain ourselves watching him. Finally, three people leave and we make our way into the dimly lit bar to the second room. 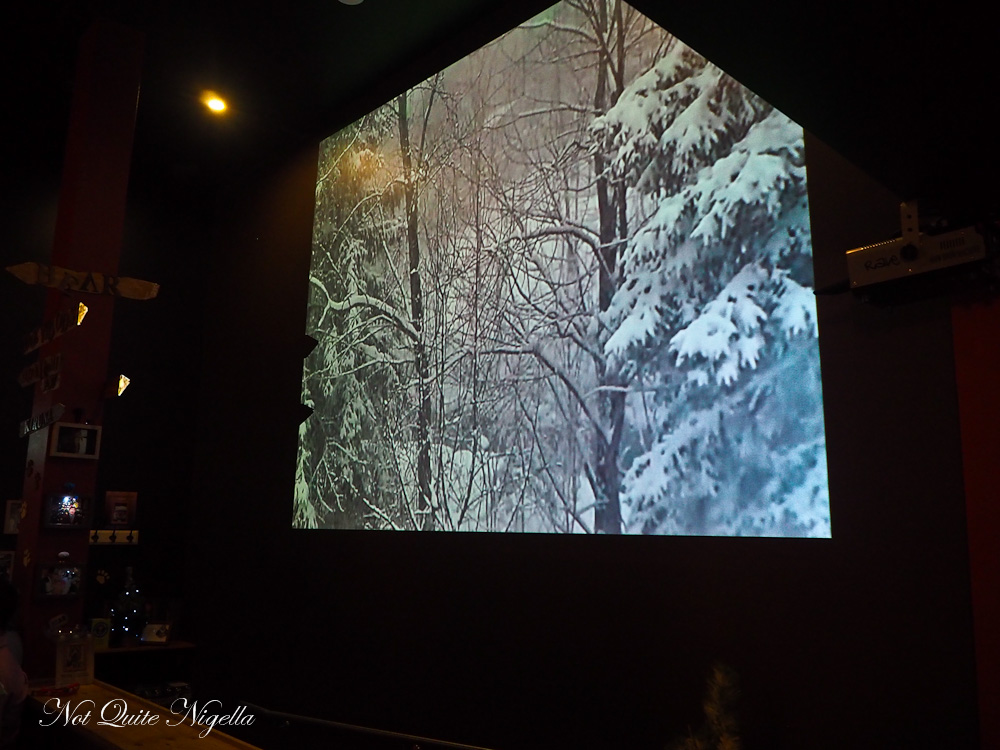 It's a curious use of space and we realise that we are sitting in what is a dessert cafe during the day but from Friday to Sunday it transforms into a small bar. Inside it is chaotic, the heat buffered by the metal roller door rolled half way up that also leaves the aroma of cigarettes from the smokers outside to waft in. 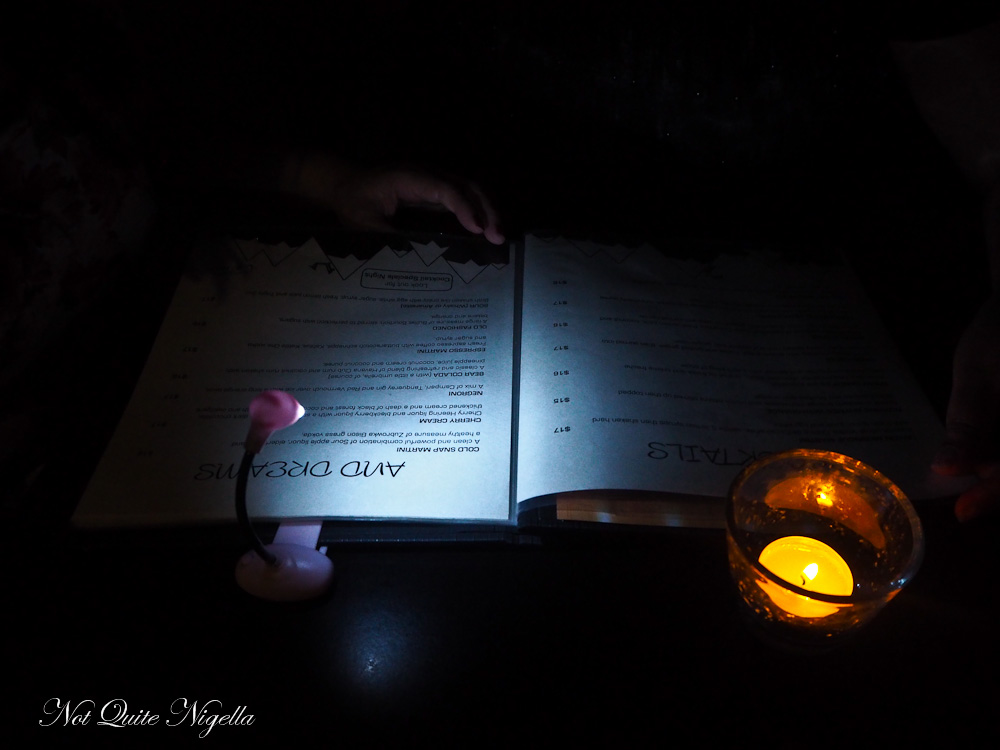 It is mostly an after work crowd this Friday night. It is dark so the menus have little lights attached to them. Said to be a Scandinavian bar it's more Scandinavian-ish although Danish Viggo really doesn't find that much Scandi to it apart from some meatballs and hot dogs. It is however quite unique in the Chinatown/Haymarket area. 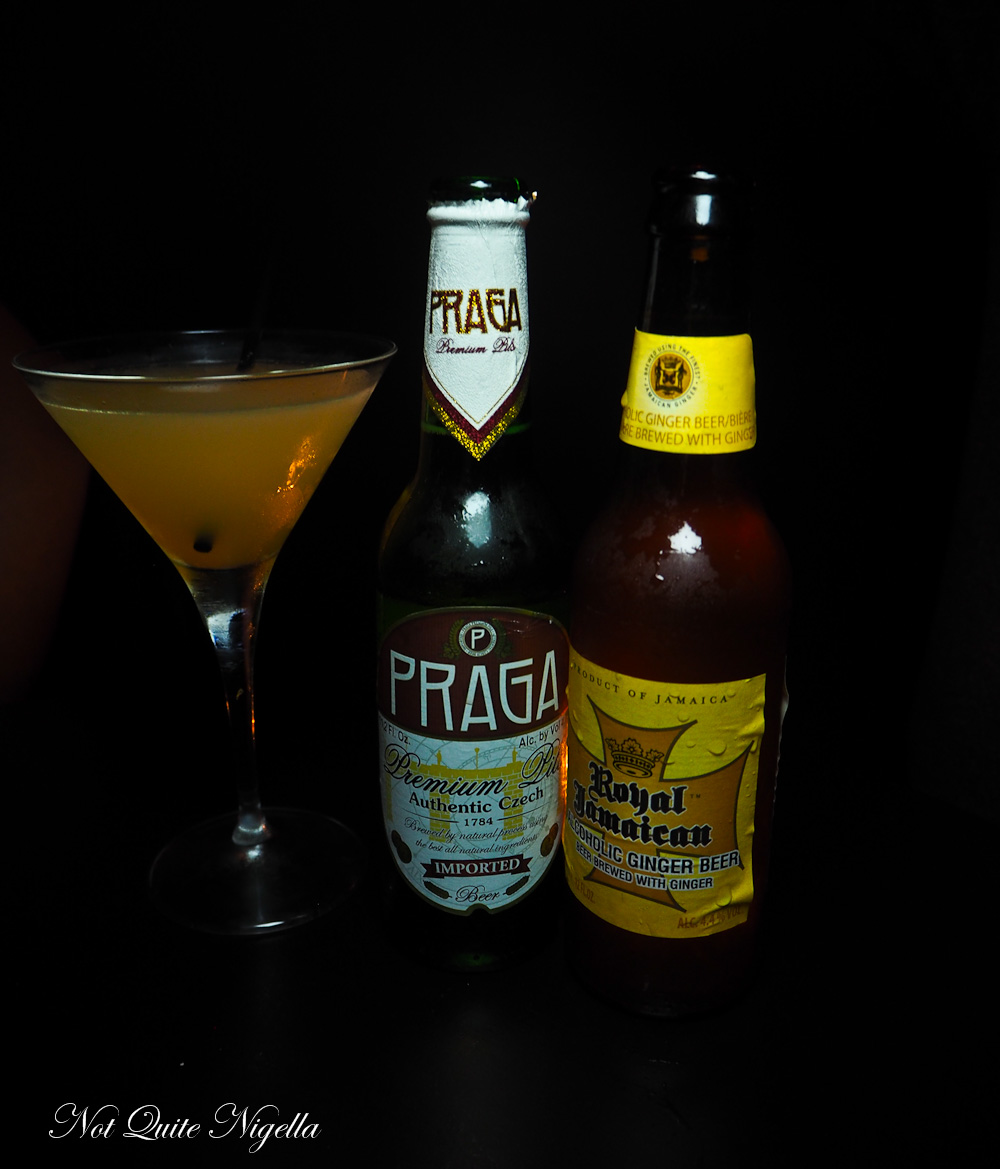 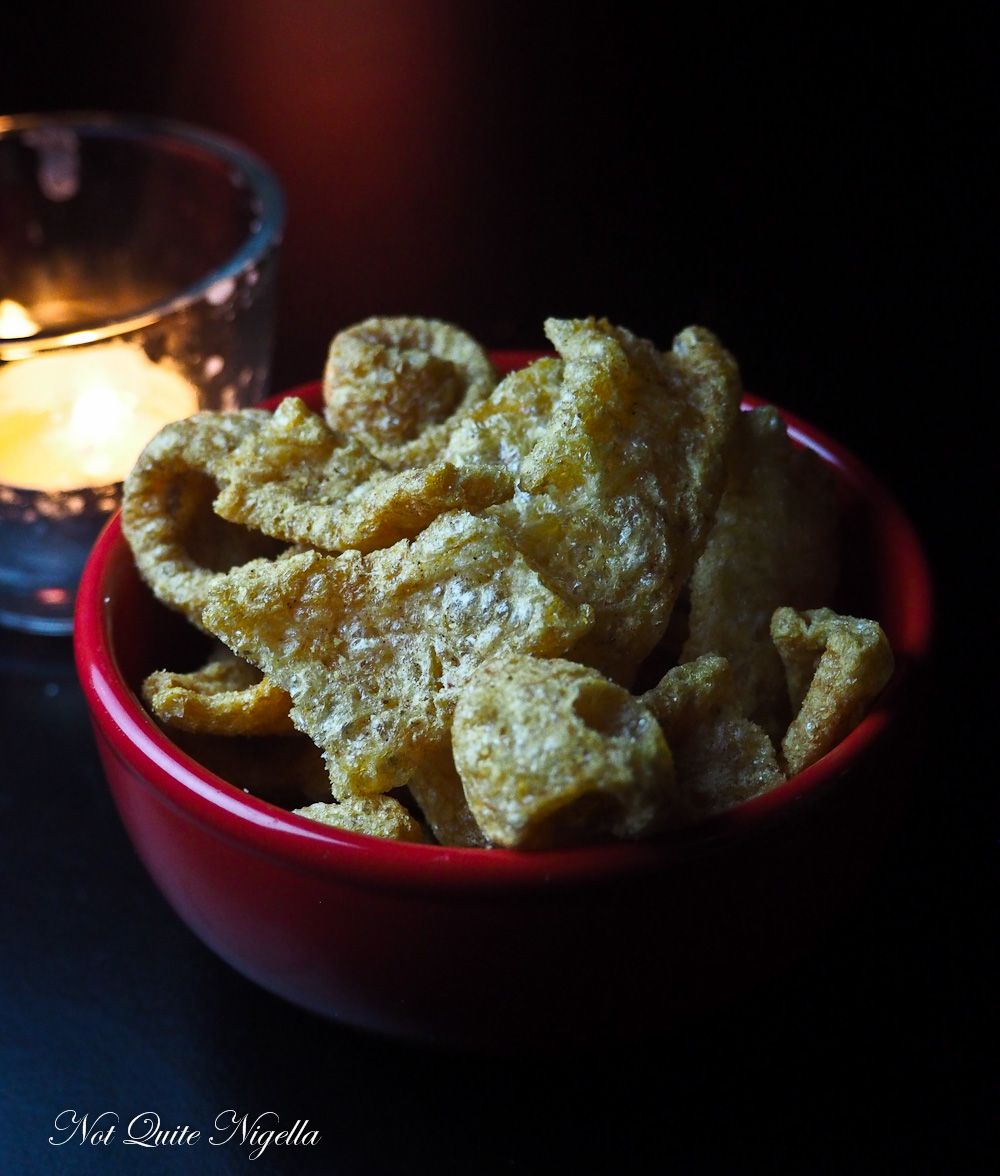 The food comes out slowly and in no particular order so you do need to share if you are hungry. The pork crackling is tasty - crunchy and light without being greasy we dive into this. And wait. And wait. 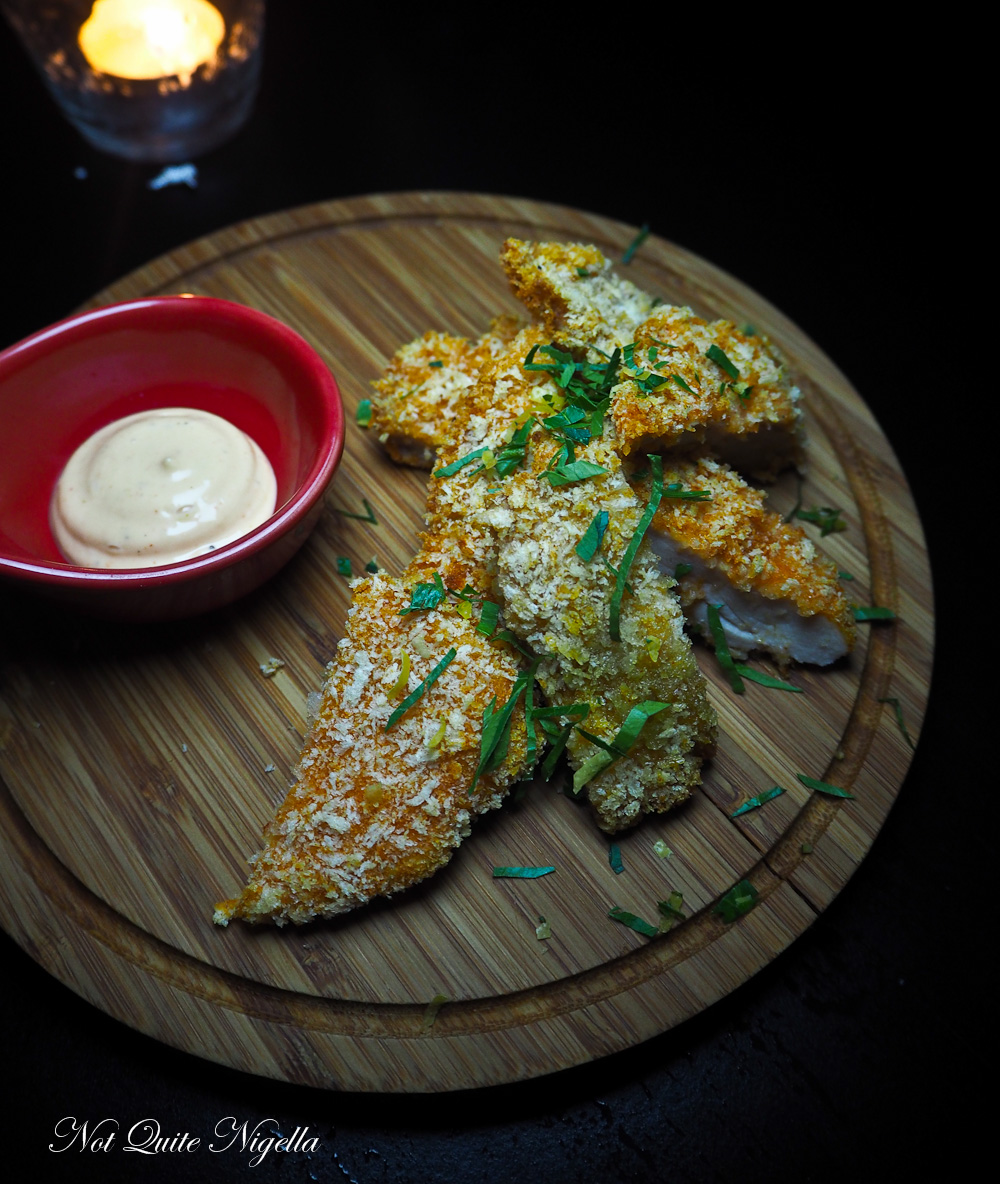 What is interesting about this is that it is chicken thigh rolled in panko breadcrumbs and then baked in the oven. Usually it is fried for maximum crunch and swiftness but this oven baked version isn't bad at all. While the crumb could be crunchier, the chicken is very tender and soft. It comes with a spicy chilli mayonnaise. 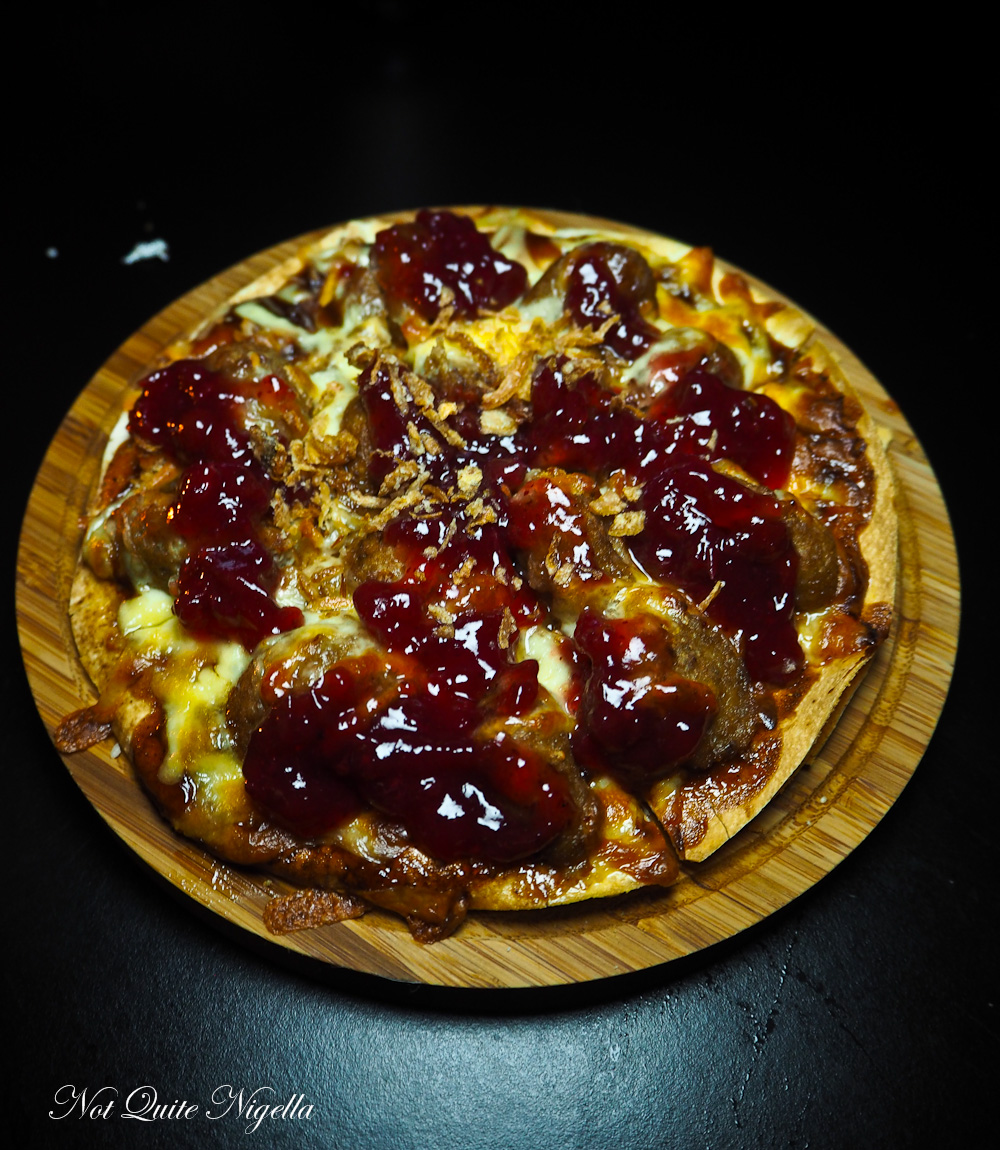 All of the pizzas have a geographical reference (e.g. Iceland, Germany, Scotland) and we go for the excitable Swede. It's a tortilla base with a topping of Swedish meatballs, bbq sauce, fried onion, cheese and lingonberry sauce. It's actually not too bad although it is quite unusual a combination on a pizza. 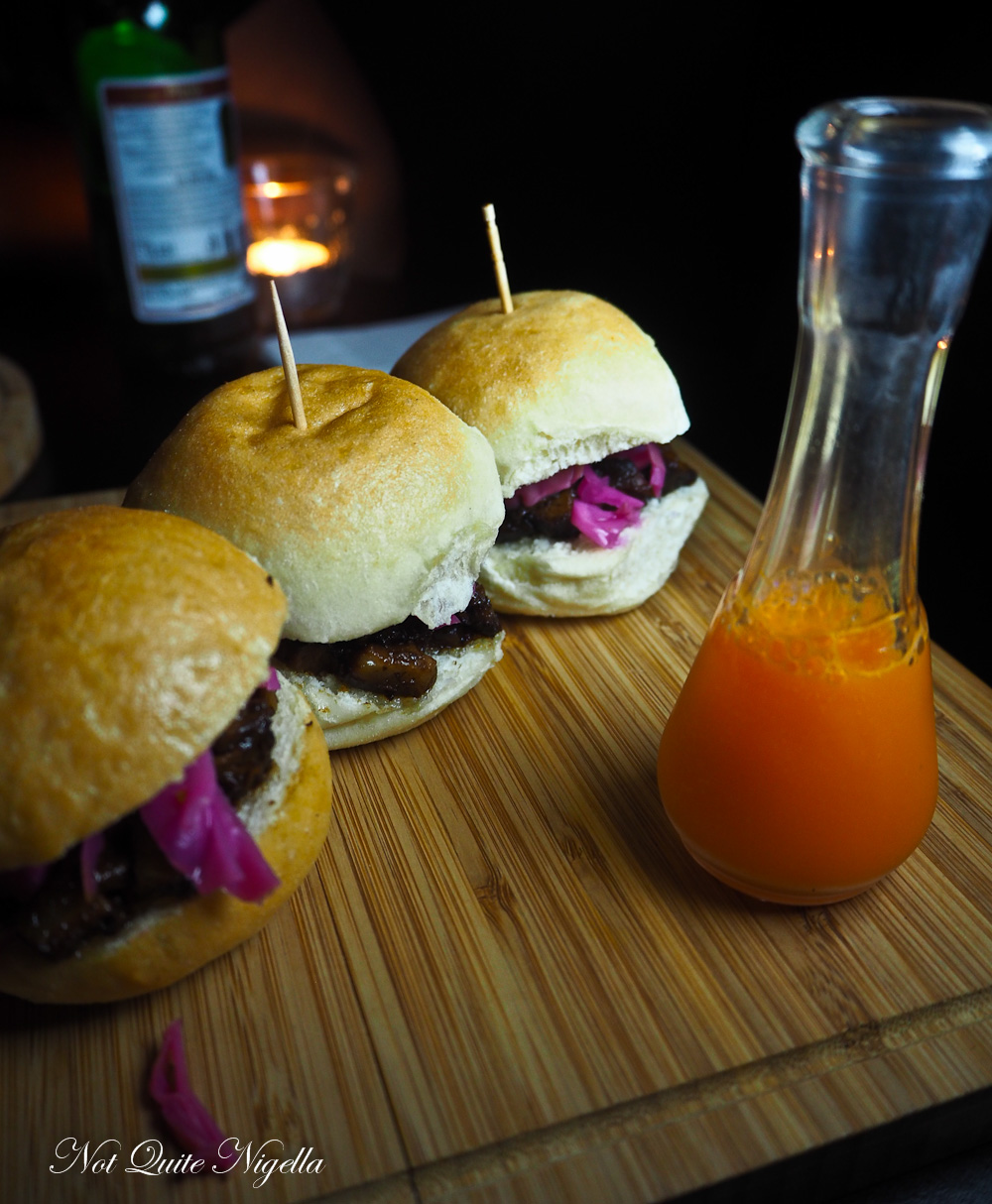 The sliders come in serves of three and the Chinger is the Chinese style slider. It's filled with a soft, sweet and delectable barbecued pork filling in a warm bun with pickled cabbage. The side drink is curious - it is set down without explanation so we assume that it is chilli fire water but it turns out to be a carrot and lemon juice as a palate cleanser. While the sliders were delicious the palate cleanser was an odd touch and not really necessary. 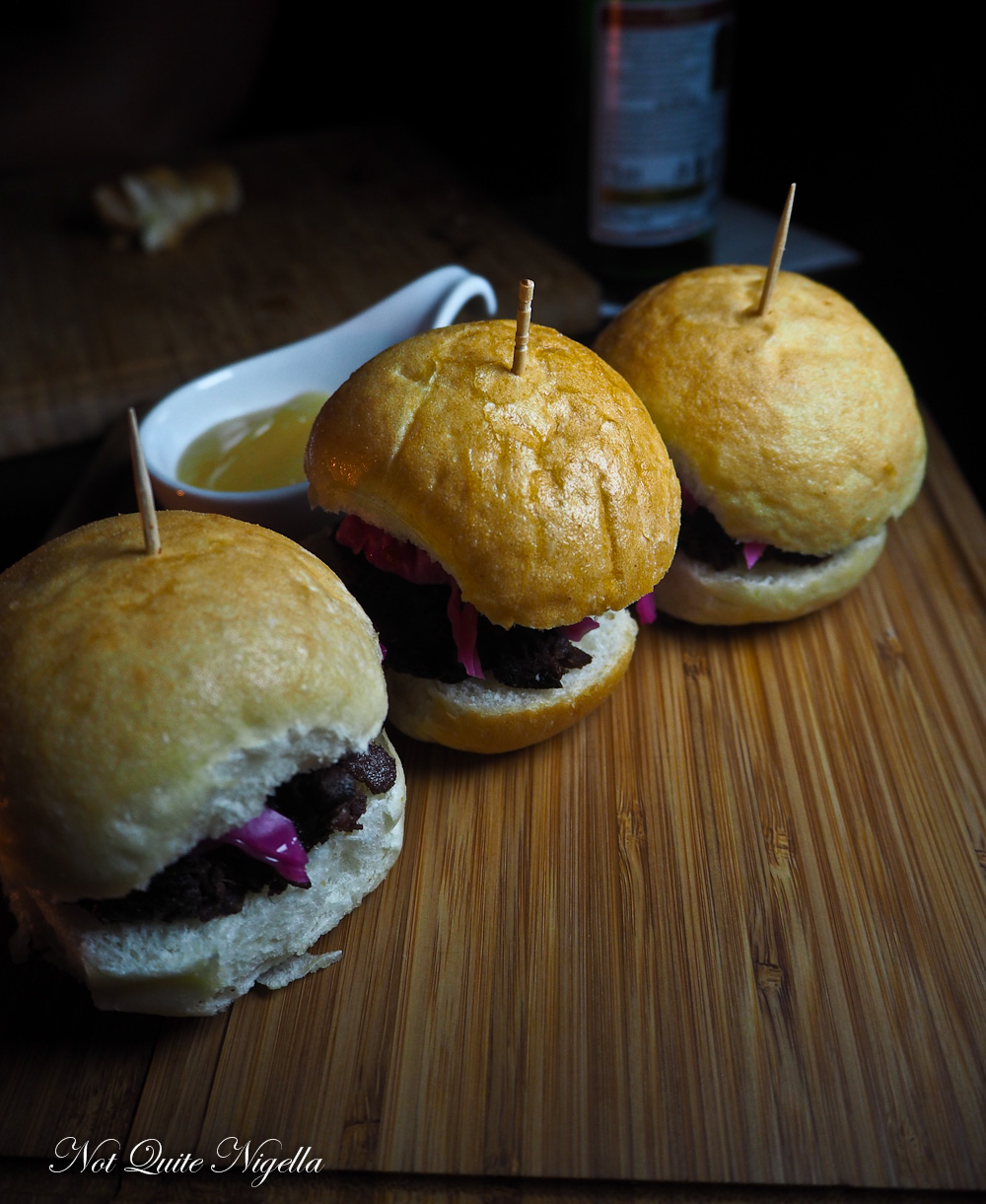 Alas none of us were smitten with the triple pudding made up of discs of black pudding which we usually love. Here is it dry inside the cold buns (the ones above were warm) and there's just a little of the pickled cabbage. On the side is an apple sauce which we just didn't like with the buns and didn't provide enough moisture. 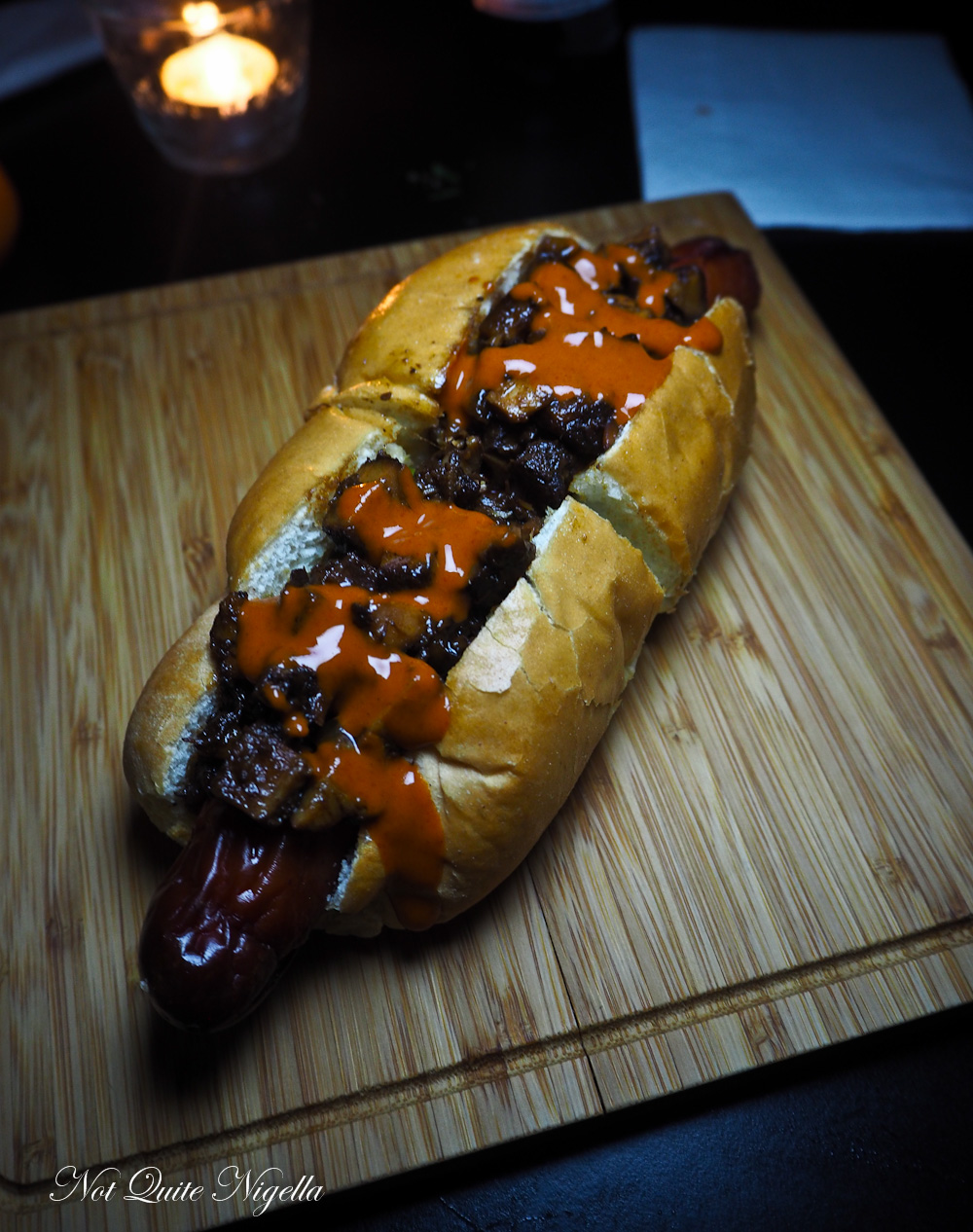 Well with a name like "Sure Coronary" we had to take a closer look at it. It is a smoked pork sausage topped with the same barbecued pork as on the Chinger slider. There are pickled gherkins and a hot chilli sauce and this is definitely one of the favourites of the night if you can handle spicy. "My lips are on fire," I say. "Yeah, a little bit," says Viggo with typical Scandinavian understatement. 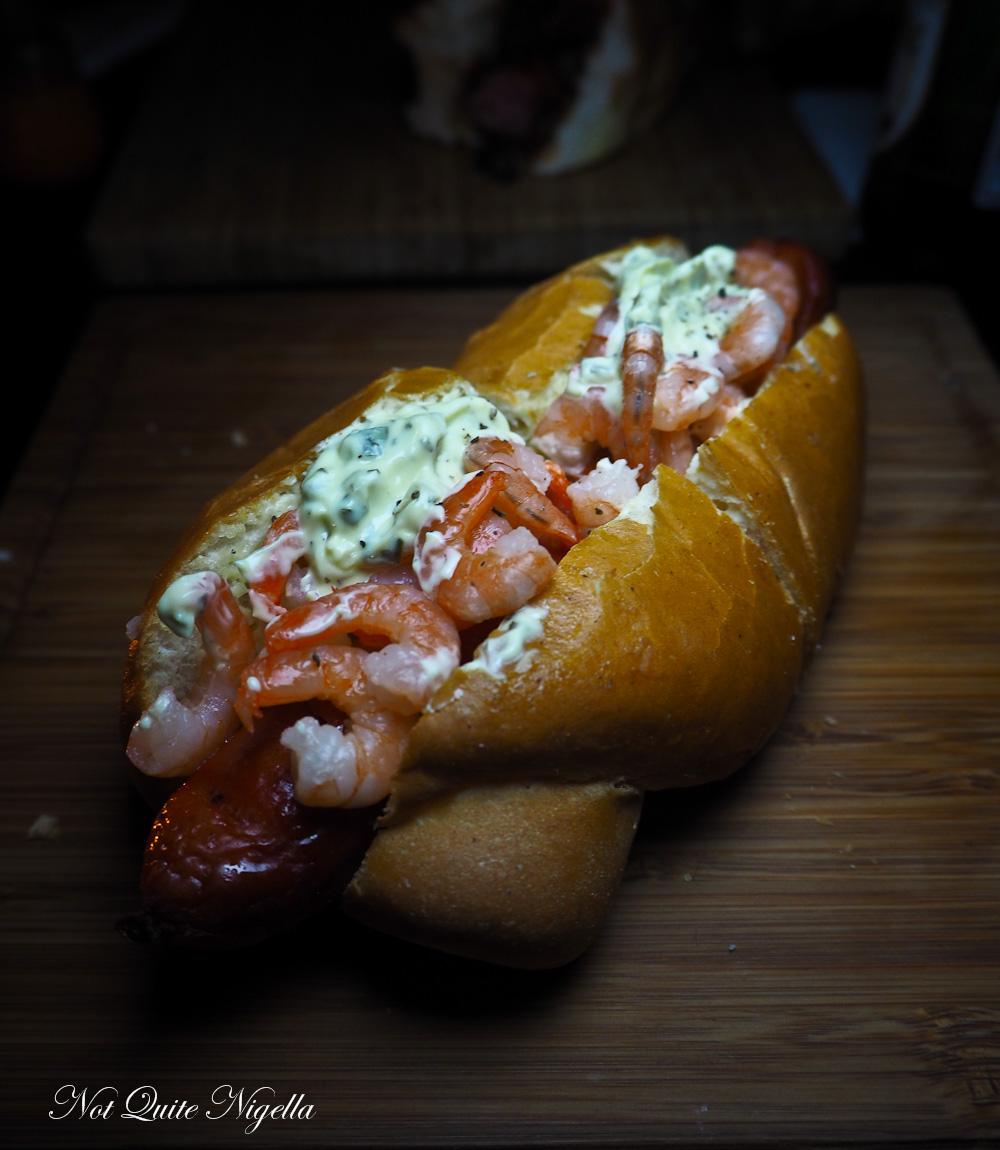 Described as a "long suspicious sausage" it's a frankfurter topped with tiny prawns and remoulade and a side of mustard. It is odd but it works on some level although I much preferred the smoked sausage over this one. 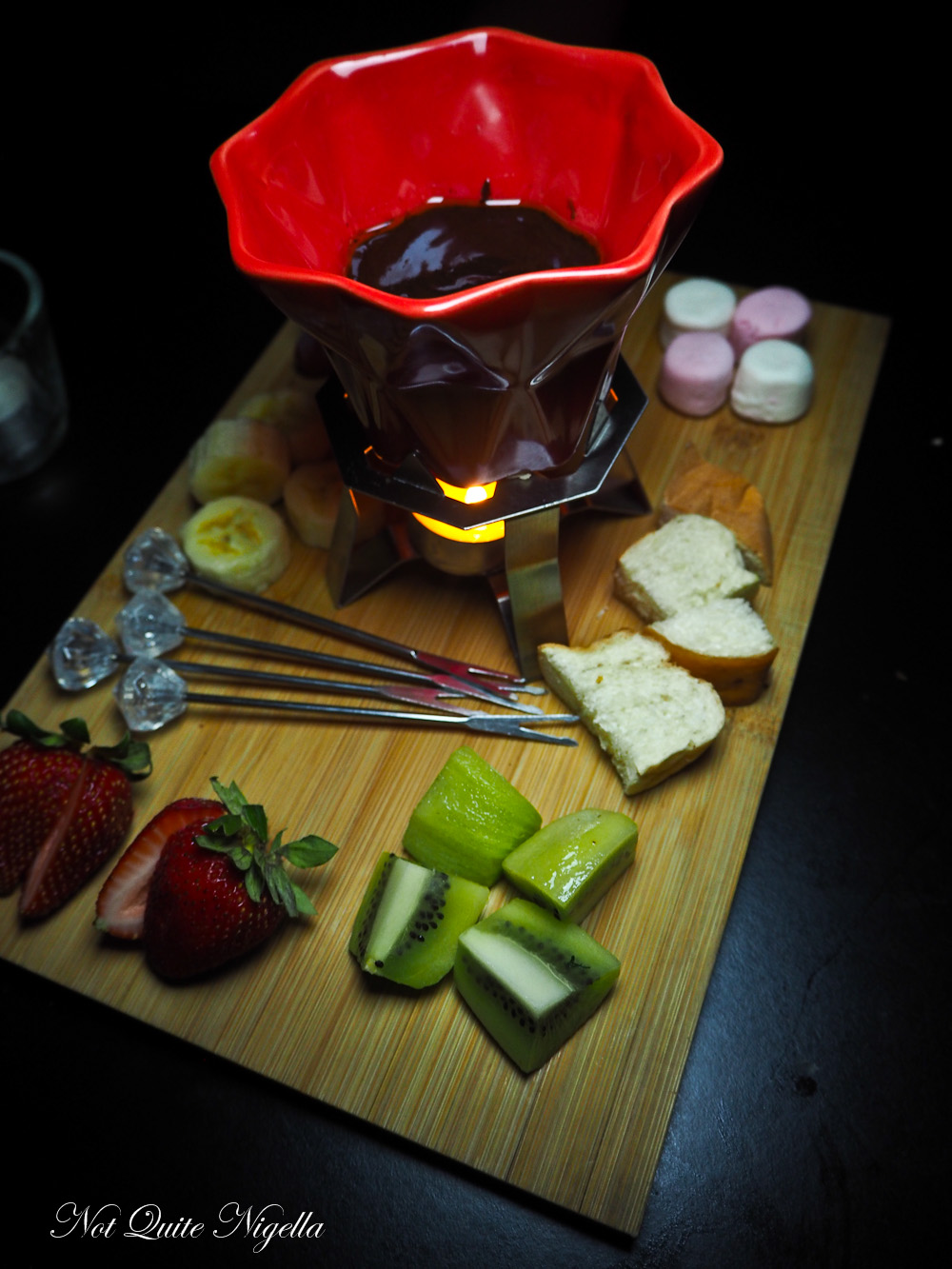 There is a humorous "The Sober Scot" item which is a deep fried Mars Bar charged at £0.50p but this is of course temporarily unavailable. Instead we go for the fondue which comes with a warning: if a man drops food into the sauce he buys the next round, if a woman does the same thing she has to kiss her neighbour. We pick up the four forks and spear the fruit and marshmallows and dip it into the dark chocolate sauce. There is not a drop spilled.

So tell me Dear Reader, do you ever queue to get into a bar or restaurant? Do you have a favourite small bar that you like to visit? 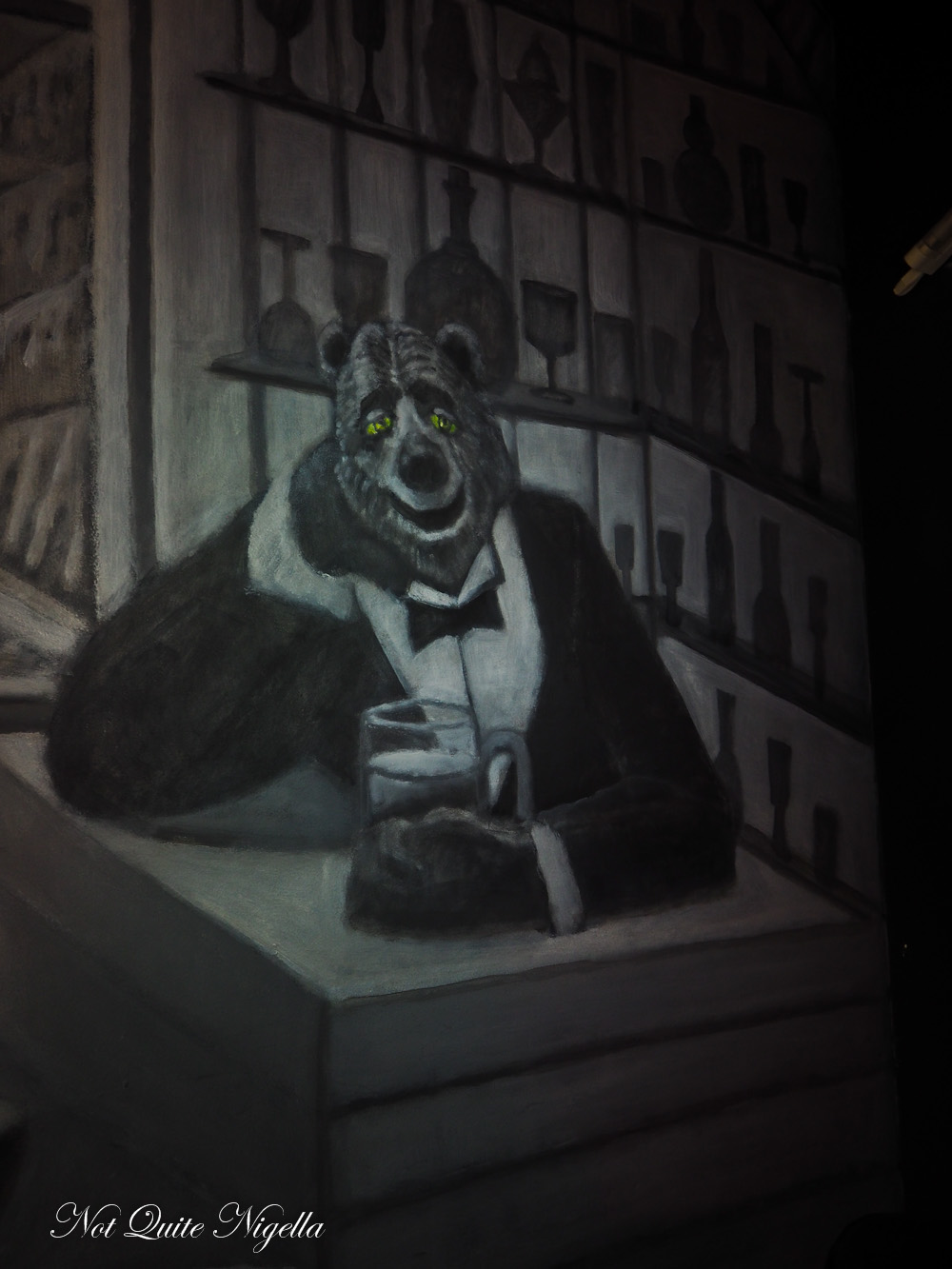