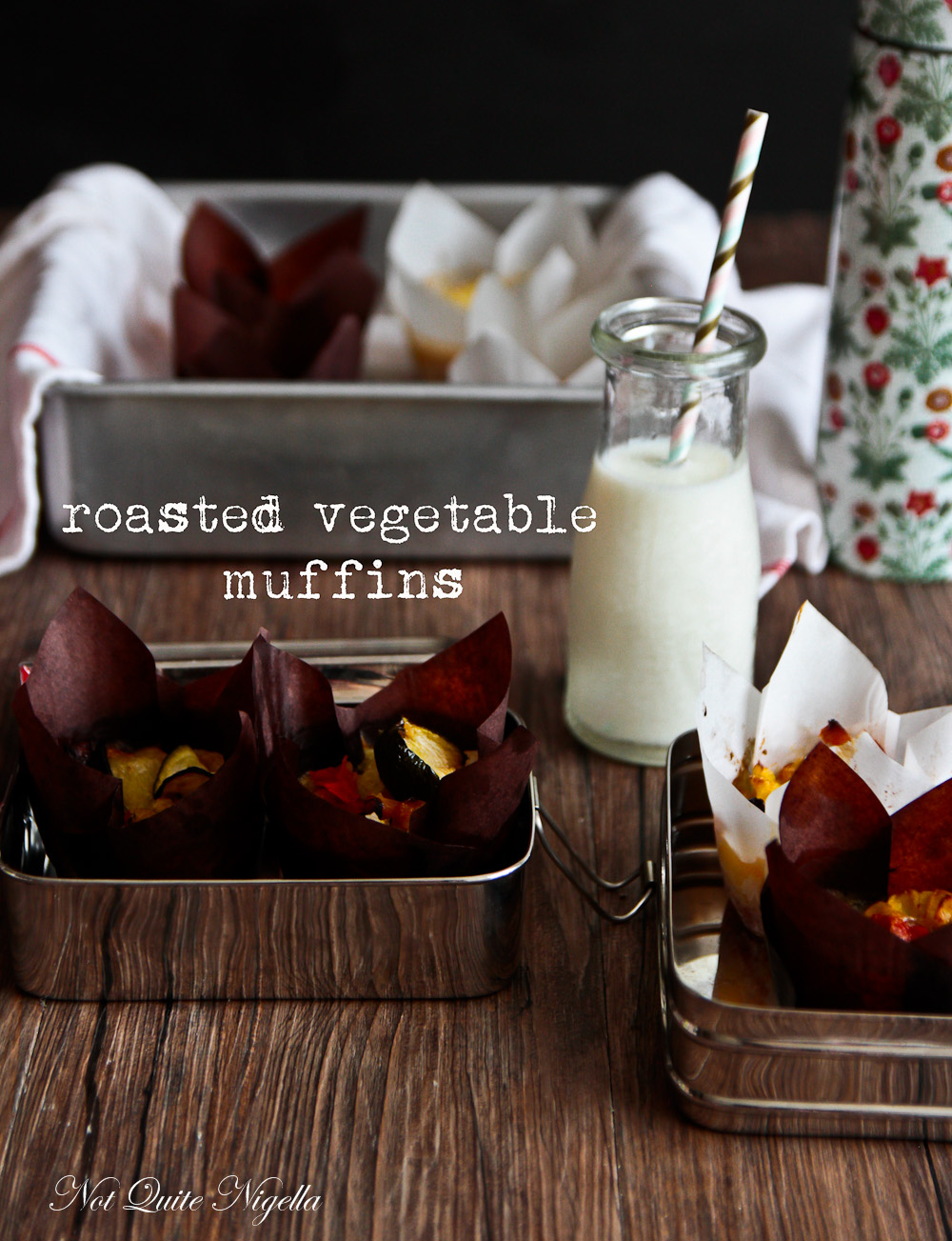 A review on the new film "That Sugar Film" and a recipe for some delicious roasted vegetable muffins for your lunchbox or for breakfast.

Documentaries are my favourite genre of film, ever. I'm a firm believer that people are much more interesting than anything a screenwriter could make up (okay perhaps not David Lynch). A few weeks ago I went to see a preview screening of "That Sugar Film". It charts the changes in a man's life after he switches his diet from a "healthy" diet to one high in sugars. It's all based on the measure that the average Australian eats about 40 teaspoons of sugar a day. In this experiment his sugar intake wouldn't be through things like lollies and other known sugar sources but rather so called "healthy" foods.

I was always going to find the film slightly irksome given that I happen to think that cake is one of the best things on earth and this blog is pretty much a testament to all things sweet and delicious. And Damon Gameau is a slightly different narrator than say Michael Moore. Like Morgan Spurlock, Damon is the star of this (he and his girlfriend are both actors). But fair enough, the experiment is on him although there are just too many shots of him in his underpants.

Nevertheless it's fascinating stuff and it is shocking seeing how much sugar is contained in supposedly healthy processed food. The film also explains the differences between types of sugar and how glucose can be easily absorbed but fructose, the sugar contained in fruit and in a lot of processed food, isn't readily absorbed and it is turned into fat in the liver. 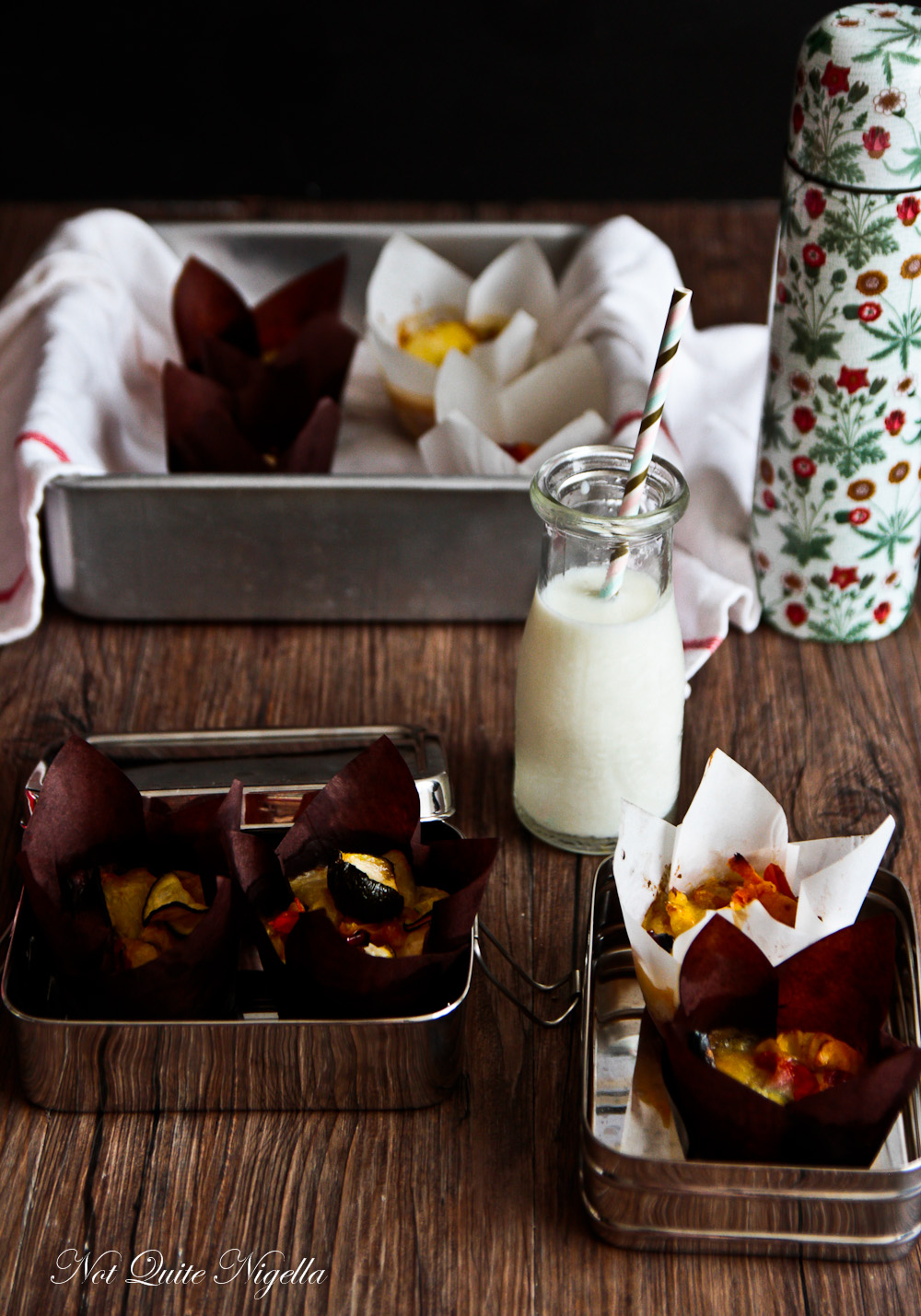 The first cannon comes when he has his first breakfast. He starts with cereal and even ones like Just Right that aren't targeted at kids, fruit yogurt, milk and juice all add up to 20 teaspoons of sugar and that's just for breakfast so he has already started today off on a sugar high.

He also goes to Mai Wiru, an indigenous community where they've weaned themselves off their dependence on Coca Cola -traditionally the indigenous community ate very little sugar but it has been marketed to them so that they became one of the largest consumers of soft drinks in the world. But in Australia, we're relatively lucky because once he gets to America, that's when sugar amounts get a little scary.

Enter the Mountain Dew kid Larry. You can of course chalk that up to "Only in America" or specifically "Only in Kentucky, America" but geographical location aside, it's more a statement about how sugar is almost like a drug. As they put it, it is like a legalised form of drug. I don't want to spoil it but essentially, Larry is a kid that drinks about a 12 pack of Mountain Dew every day and whose 2-3 year old niece drinks Mountain Dew out of her baby's bottle.

The most subtly terrifying thing is perhaps the most innocuous looking. His last meal is a kid's lunchbox that contains processed items that I think many parents would opt for instead of overtly sugary treats. The key is that they are all processed so all contain hidden sugars. The key is really eat less processed food more than anything else, not a new lesson.

One thing that we didn't find out until the end was that his healthy diet is similar to the paleo diet. His meals are omelettes or meals with plenty of bacon and avocado and he specifically mentions that there is no bread but the word paleo isn't used. Whilst I love bacon, to have it regularly is not healthy at all and paleo is controversial. Perhaps he should have outlined what exactly his "healthy" diet was first and not at the end. But that aside, take the film for its informative stance on sugar in processed food because it is worth watching for that. 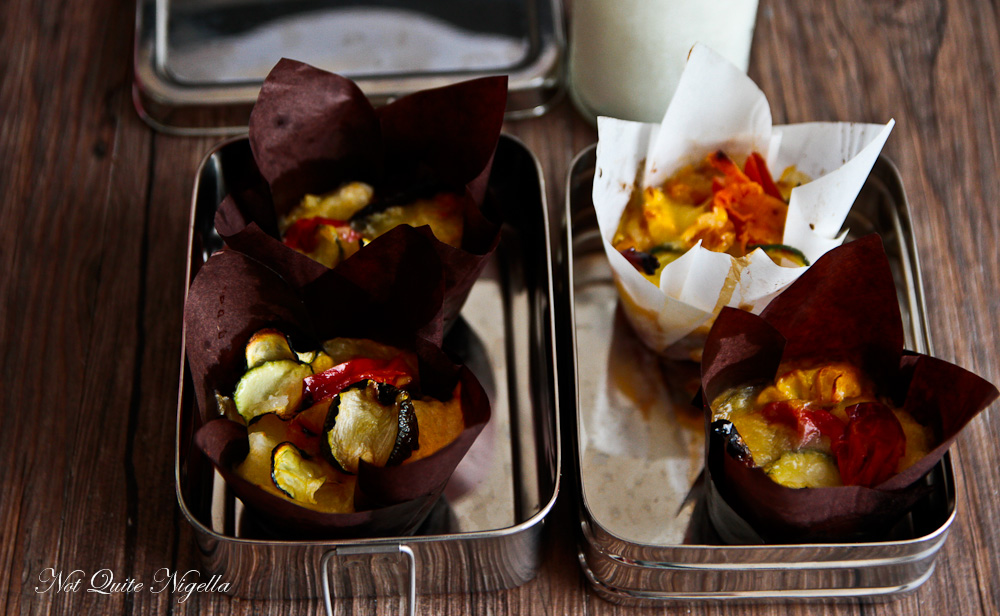 I do try and eat well and make as much from scratch as possible but time is often the hardest thing to find and so I understand when people buy things hoping and thinking that they're healthy. I try and make most main lunches and dinners meals from scratch if we aren't eating out. I loved the idea of making some roasted vegetable muffins for Mr NQN's lunch as I knew that I was going to be away and these easy to eat snacky type foods are his favourite to eat. Although Mr NQN proclaims to be gluten free he isn't at all but I know a lot of people are looking for gluten free recipes.

You can certainly buy pre roasted vegetables in jars but in the spirit of doing things yourself, try doing these at home. Roasting the vegetables takes time more than anything else but it really brings out the sweetness of the vegetables beautifully. And I couldn't help it but I ate two when they just came out of the oven!

So tell me Dear Reader, will you see the film? Do you look at labels for sugar levels? How would you rate your diet overall? 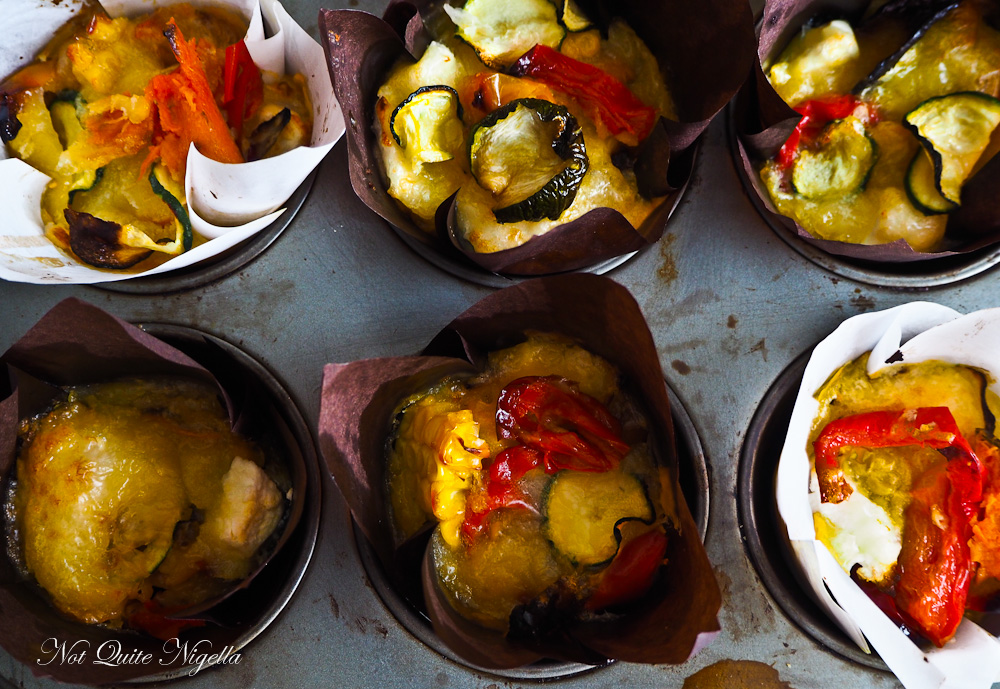 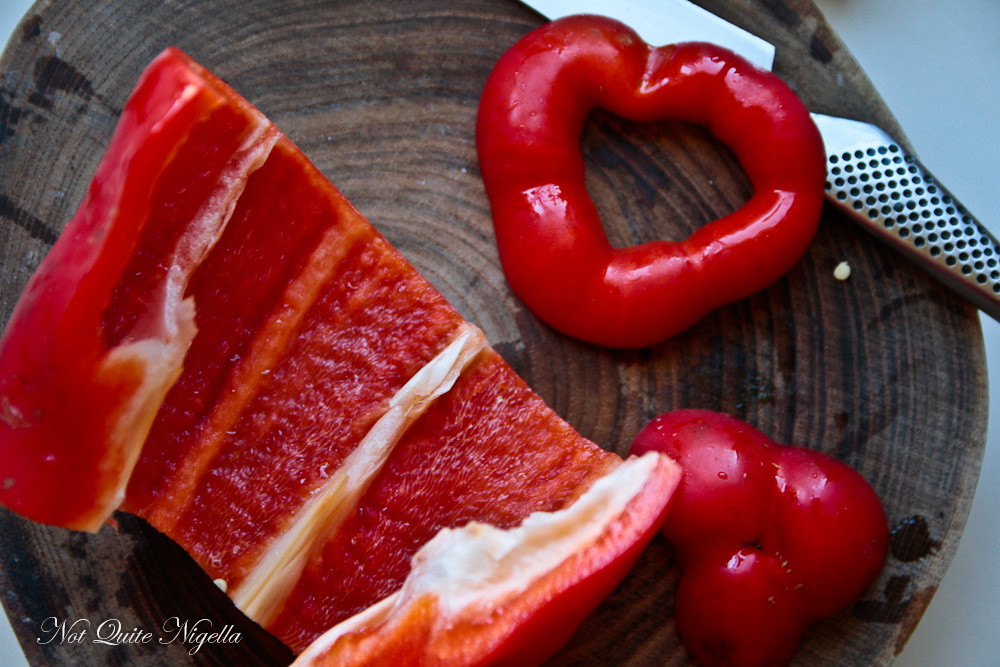 Step 1 - Preheat oven to 200C/400F and line two baking trays with parchment. Cut up the vegetables-I recently learned a tip to cut capsicums or bell peppers up. You slice off the top and bottom, remove the seeds and unfold the centre and slice it up. I peel and quarter the onions and put these on a tray with the capsicum. I then use a peeler to thinly slice long ribbons of sweet potato and zucchini and put those on a second tray. Drizzle both trays with oil and roast the capsicums and onions on the top rack as they will take longer (about 30-40 minutes) and the zucchini and sweet potato on another tray for about 15 minutes. 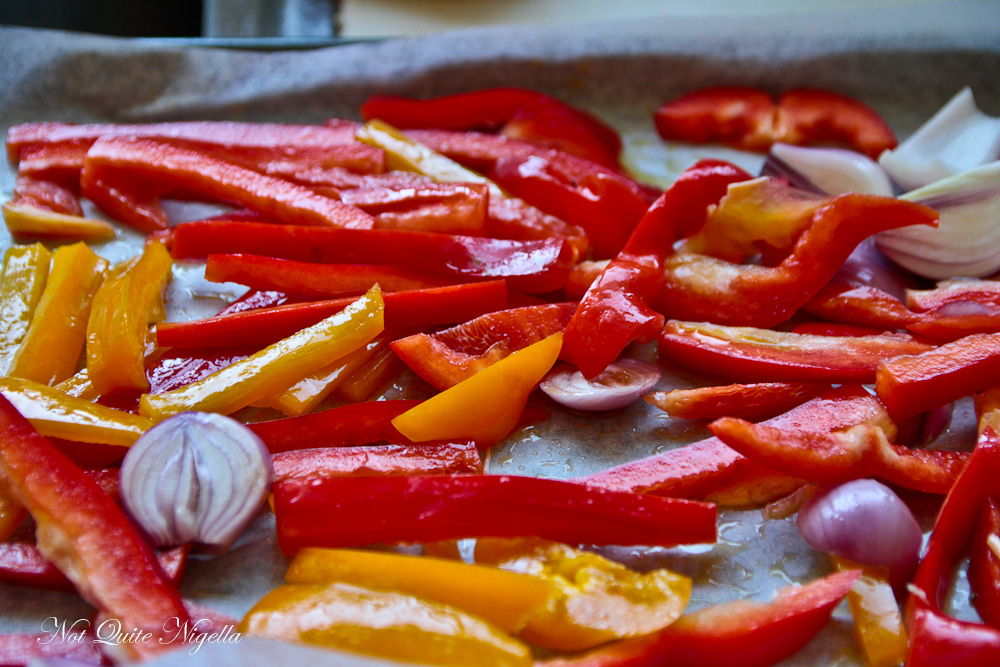 Step 2 - Keep the oven on 200C/400F. Line a cupcake or muffin tray with liners. Blend the egg, oil, cassava or tapioca flour, grated cheese and salt in a blender or food processor. Pour this into the cupcake liners and then top with the roasted vegetables and some feta dividing them evenly among the cavities. Bake for 20 minutes. 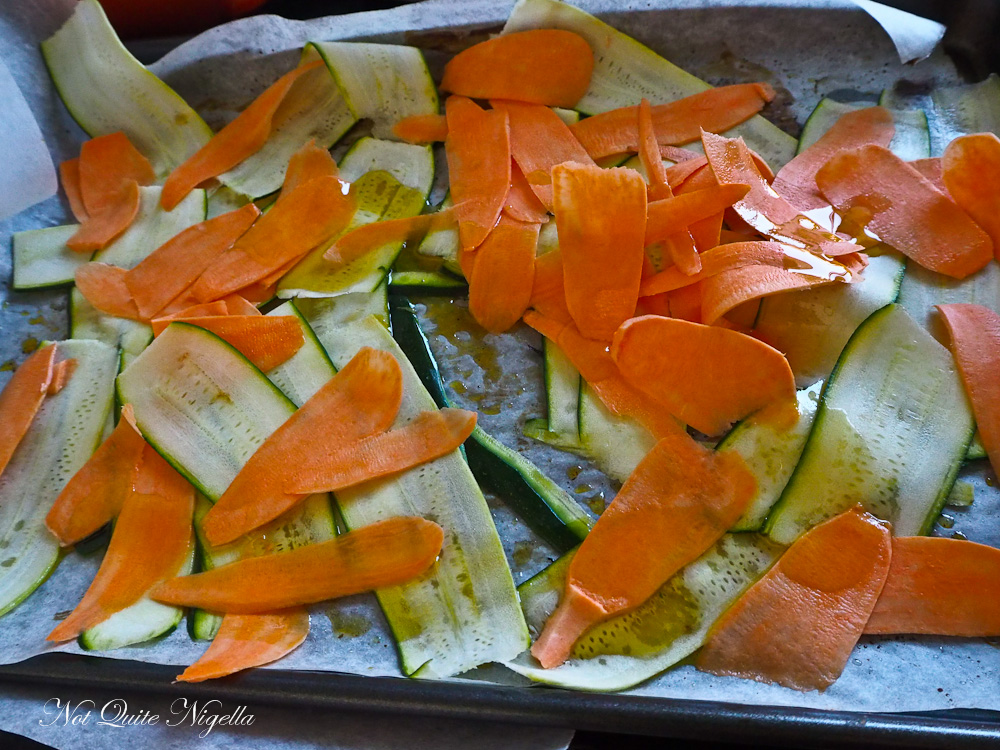