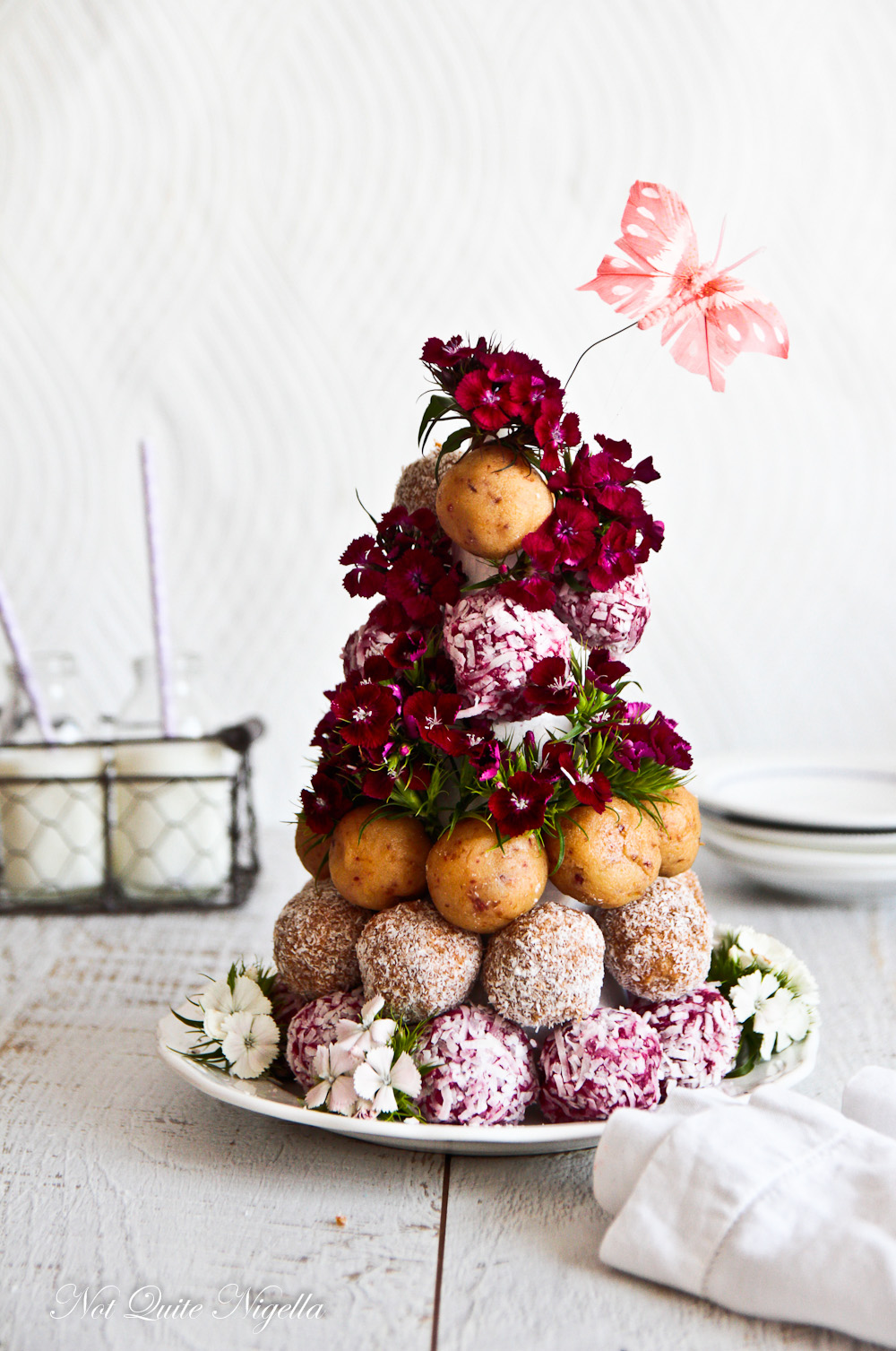 It was late at night and the streets were teeming with people. Steam rose from manholes and touts hawked their wares. "Bags! You want bags? I have best designer bags! I got Prada, Gucci, Louis!" a pushy man shouted clutching a laminated sheet with his latest designs. There were four of us trying to get to the end of the row of market stalls. It was a hot, sticky and slow paced shuffle.

We reached the end where we could finally breathe some fresh air. Fresh being of course a relative thing in the steamy heat of Hong Kong. Kris pointed to our destination - our destiny in fact. The fortune tellers. There was a row of them each promising a different skill be it tarot, palm reading or bird reading. The soundtrack is a jangled cacophony of several tipsy karaoke singers swaying to the beat of their own rhythm and melody. 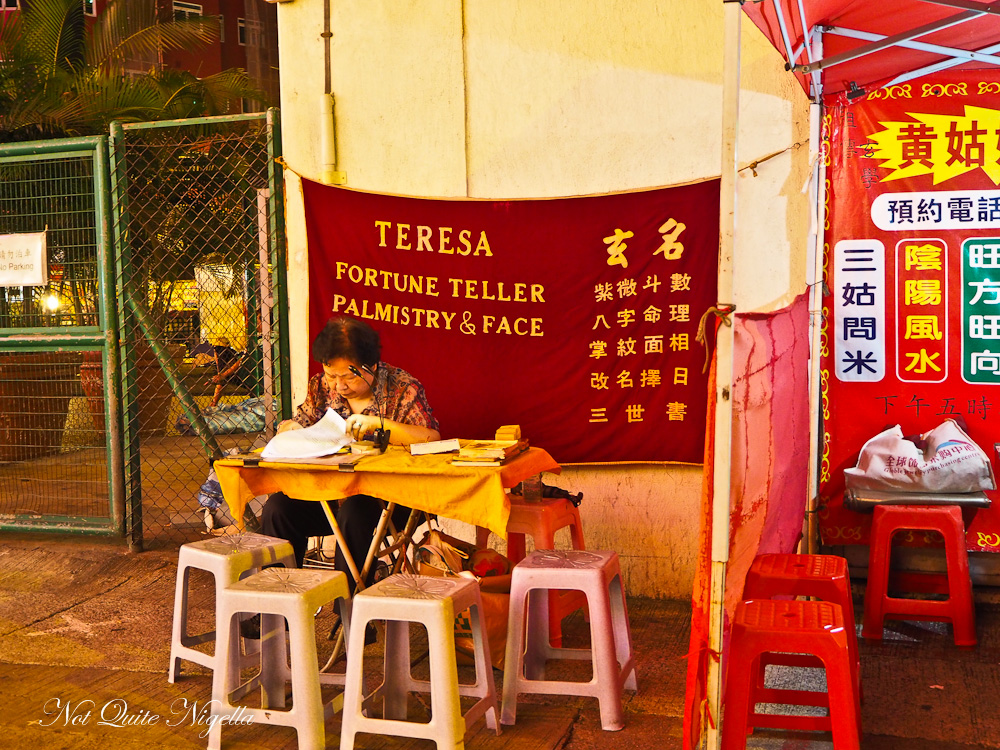 My eyes settled on Theresa. She was a middle aged woman who looked as though she were studying hard for a test. Unlike those who tried to lure customers in, she was simply reading a book and writing notes. After a couple of others in the group wasted their money with other fortune tellers we sat down and Theresa read our palms and faces. She had some very perceptive and prescient things to say to me but the one thing that stood out was a motherly piece of advice. "Eat 70% vegetables and 30% meat," she said randomly. She hadn't mentioned this to anyone else but it stuck with me. I do eat plenty of salads but I also eat a lot of meat especially since I have sort of a low carb diet.

Ever since I had the reading with Theresa I have started trying to eat a bit healthier. And no that doesn't mean cut down on the cake because then really what is the point of life? But I try to eat less meat and more seafood and vegetables. I also decided to experiment with sweets. I was talking about bliss balls or energy balls with another girl on the trip and she suggested that I make a croquembouche tower of energy balls. I do love a good cake spectacle and knowing of Mr NQN's voracious appetite for bliss balls (they were his childhood birthday cake), I decided to make three flavours. 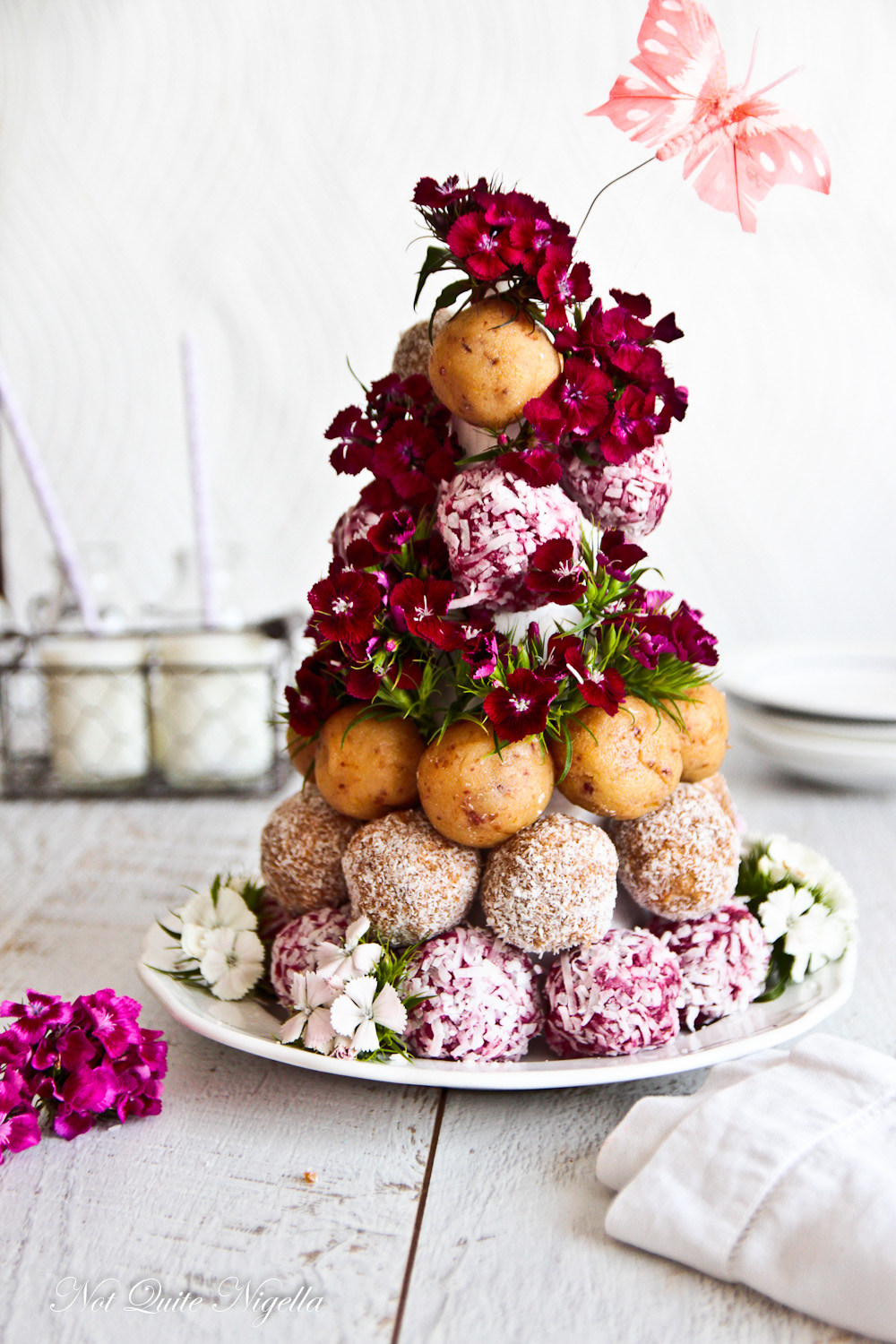 All of these energy balls are ridiculously easy and just require a quick whiz in the food processor. I started with a strawberry flavour because strawberries are plentiful nowadays and I wanted to make something with a true strawberry flavour. Out of the three this is my favourite. The pink is actually from some roasted beetroot where it gives colour but not taste. The rest of the strawberry ball is made up of cranberries, cashews, coconut and honey.

Next I decided to make a sweet potato pie energy ball because I had tried one in Bali and while it sounded great, it wasn't that good and I had a hunch that I could improve it or at least try to. The result is a sweet potato pie in a ball form. Thirdly I wanted to make a lemon and ginger bliss ball because I had a surplus of both lemon and ginger. They're the ones that Mr NQN called "potatoes".

The croquembouche part is actually really quite straightforward. Usually croquembouches are made around a metal cone and once the toffee sets you remove the metal cone so that it is empty on the inside which is a nerve wracking moment. But since I wanted to avoid the toffee as this was supposed to be healthy I bought a foam cone and stuck the bliss balls on with a toothpick!

And Dear Reader, please don't worry this blog will not switch to a health blog-I love crackling and cake far too much for that and I should also add that after I made this tower we went out for an enormous Chinese meal followed by a chocolate dipped soft serve!

So tell me Dear Reader, what % of vegetables, carbs, seafood and meat do you eat typically? And what is your favourite meat or seafood to eat? Do you like healthy snacks like this? 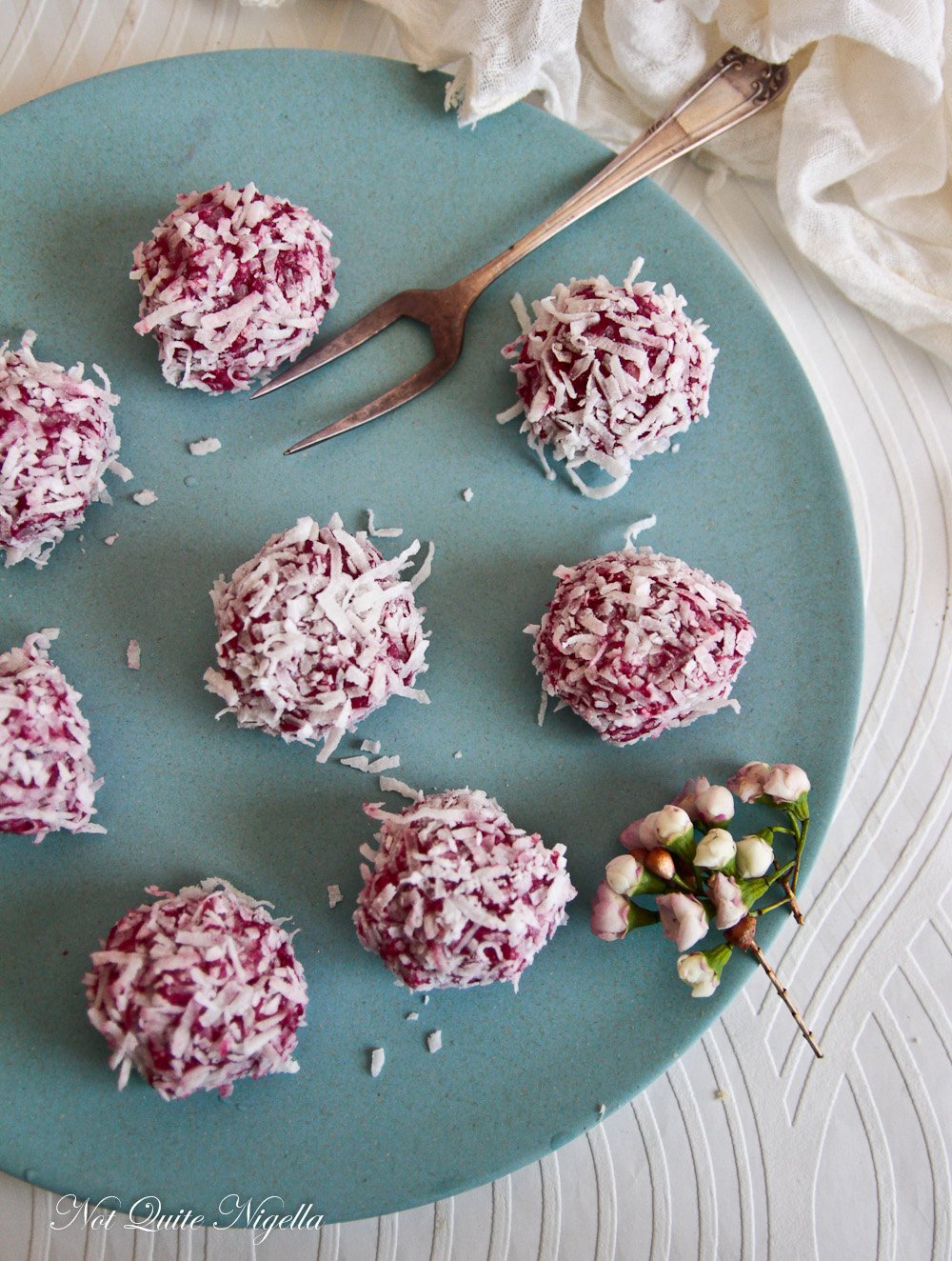 Step 1 - Add the strawberries, cashews, 2 cups of the coconut, cranberries, beetroot (if using) dates and honey or syrup to a food processor until it becomes smooth and rollable.

Step 2 - Line a plate with the extra coconut and have a tray ready for the balls. I find it easiest if my hands are slightly damp but not wet. Use a teaspoon to get a walnut sized ball and then roll in the coconut. Refrigerate for a few hours. Store in the fridge. 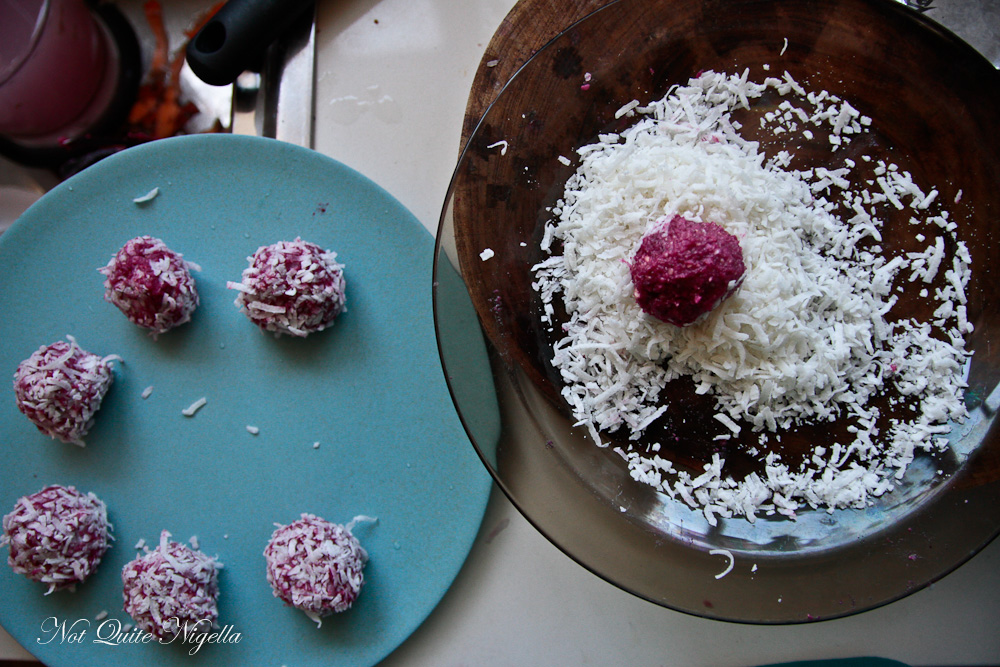 Note: if your mix is too runny, add some ground almonds to the mixture. If you are making them into a croquembouche you will need them to be firm enough to hold up on a toothpick. If you just use strawberries, the mixture turns a grey colour which is fine albeit not a really appetising colour. Adding the beetroot gives it that bright pink purple shade.

Step 1 - Peel a sweet potato and place it on a plate. Cover with cling film and microwave on high for 4 minutes or until cooked. Allow to cool. 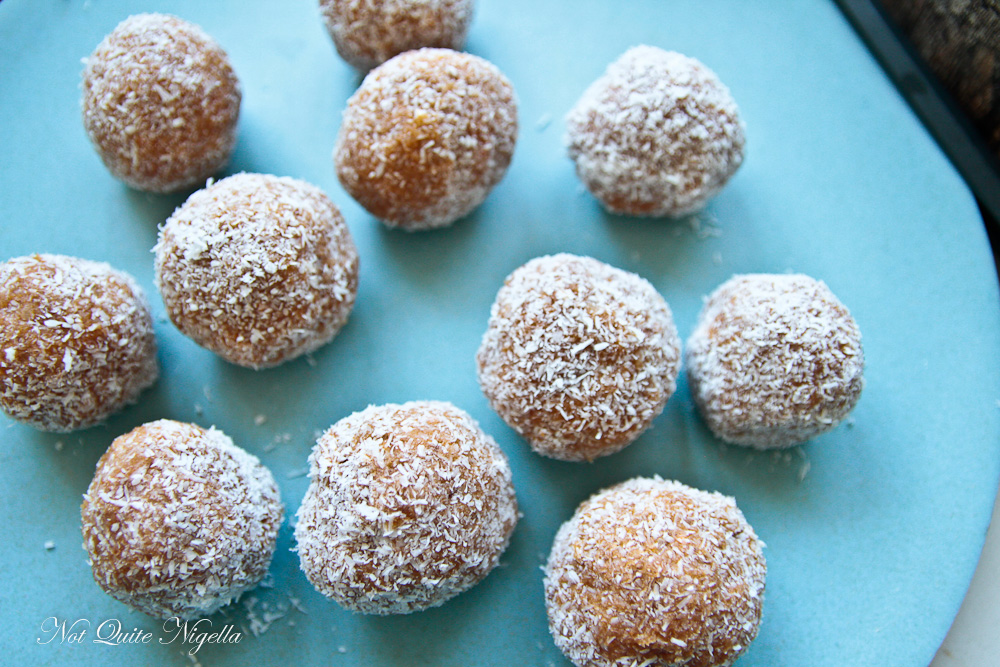 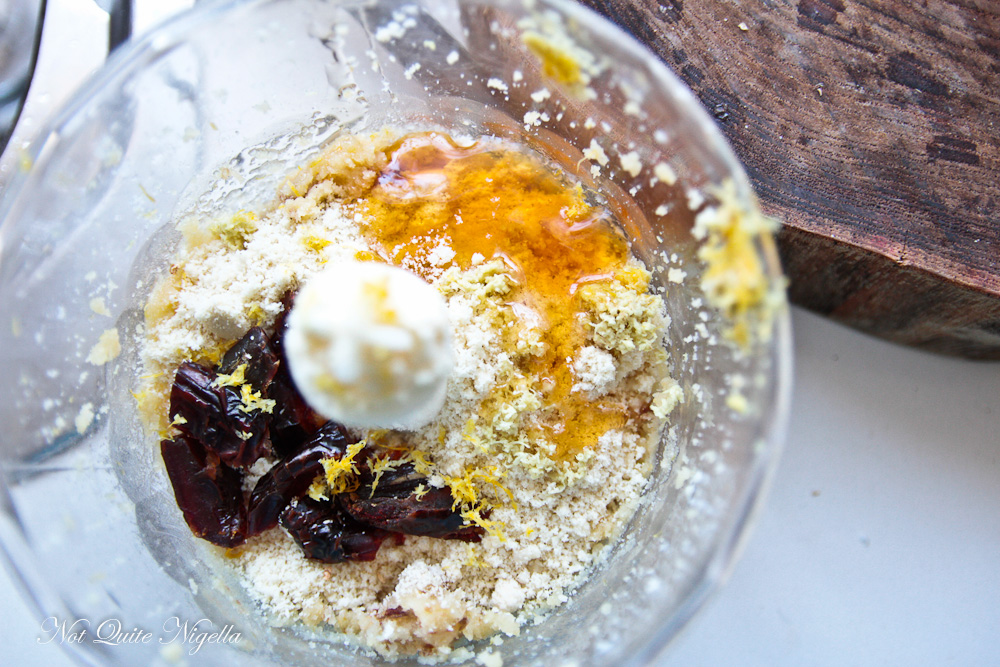 Step 1 - * Blend all of the ingredients in a food processor. Taste for flavour-add more ginger, lemon zest or sweetener if you want. I put an asterisk next to these two ingredients as it depends on how strong you want these flavours to be. Add this amount and then add more according to taste.

Step 1 - Start from the bottom of the cone and impale the balls using toothpicks. It's a bit more structurally sound if you have a consistent stack of balls on top of each other although I broke it up with a row of flowers. You can just tuck these within the balls. Be careful not to use flowers where the sap is poisonous. If in doubt, wrap the stems in green florist tape. 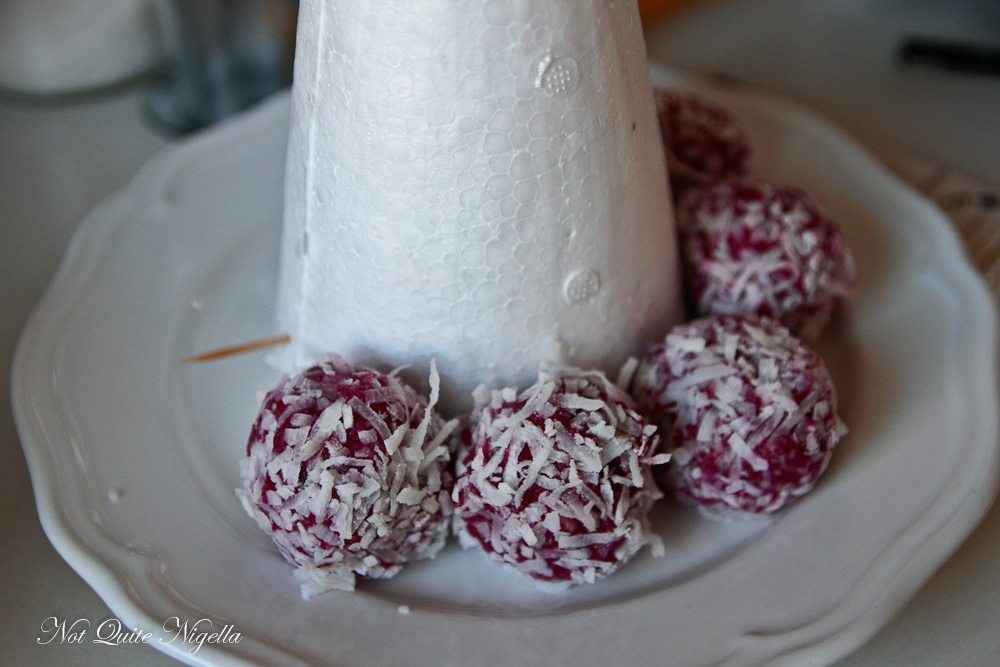 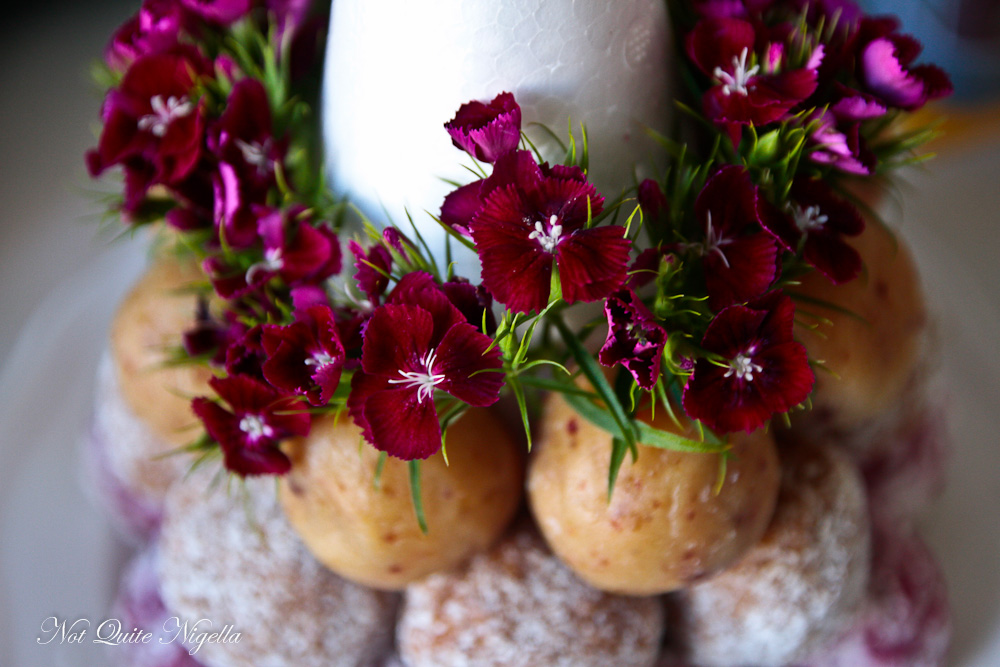 A row of flowers 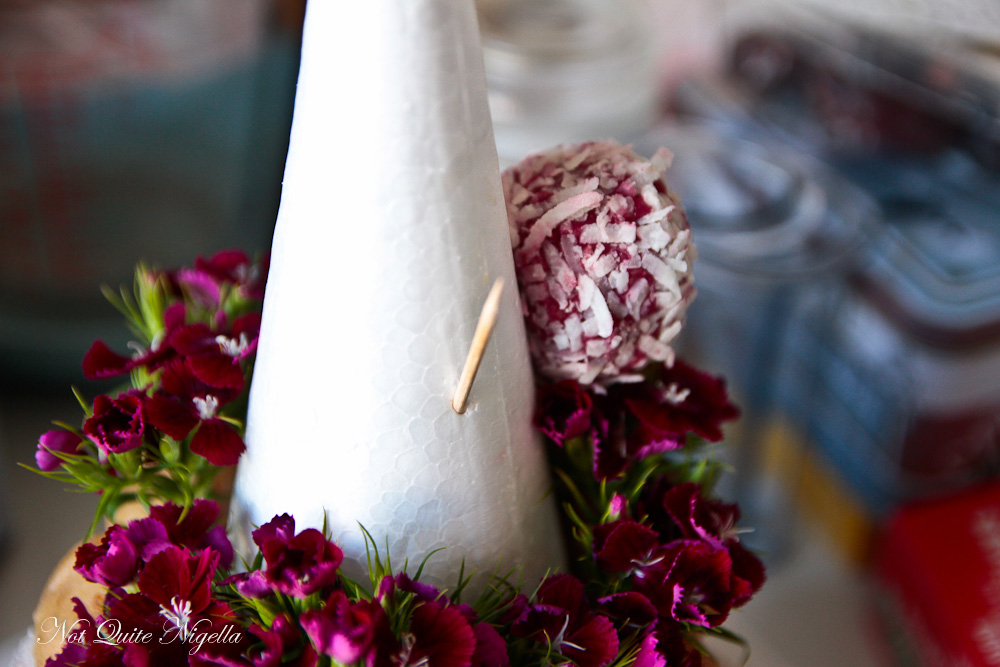