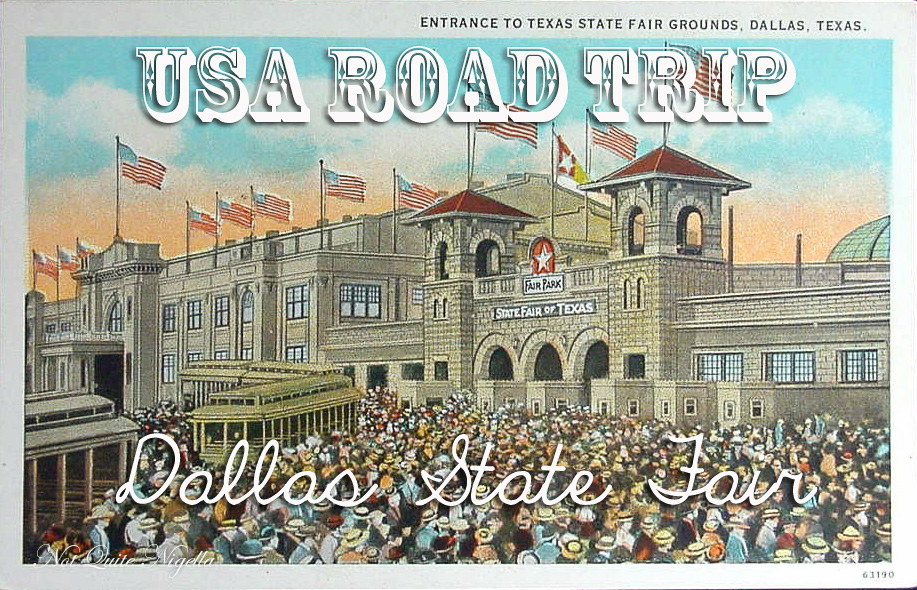 A comeback always draws a crowd. Cowboy Big Tex stands smiling over everyone at 52 feet tall. The legendary symbol for the Dallas State Fair commands everyone's attention and they are rapt as he speaks a deep welcome to the opening day of the Texas State Fair. It's a perfect day to visit the fair; it's lightly overcast keeping it cool but with beams of sunshine and not a drop of rain. 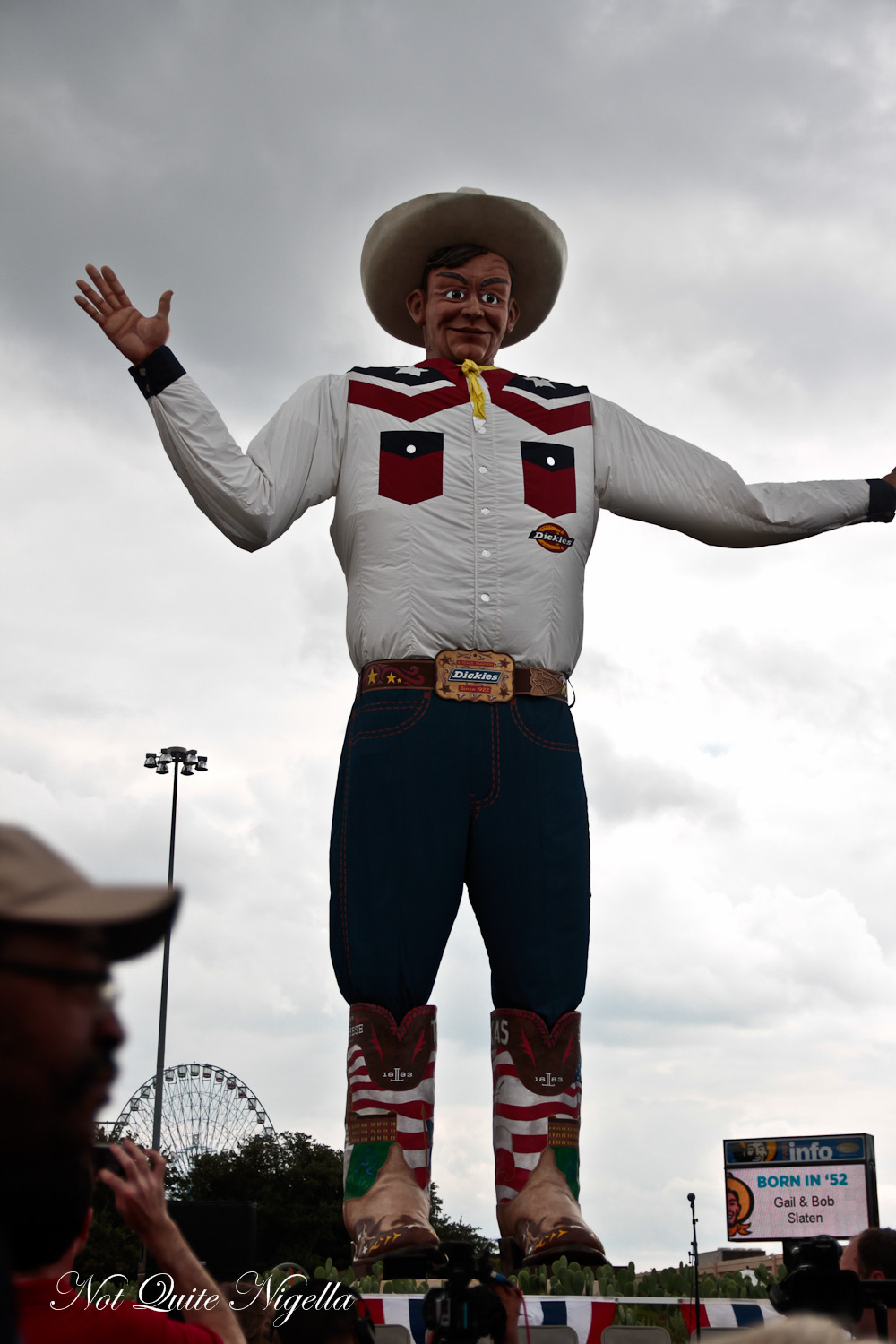 And it was in 2012 that 60 year old Big Tex was consumed with fire in the final weekend of state fair. The much admired icon was destroyed in under 15 minutes. In 2013, Big Tex is all new and welcomes fairgoers who relive many memories when he speaks again. 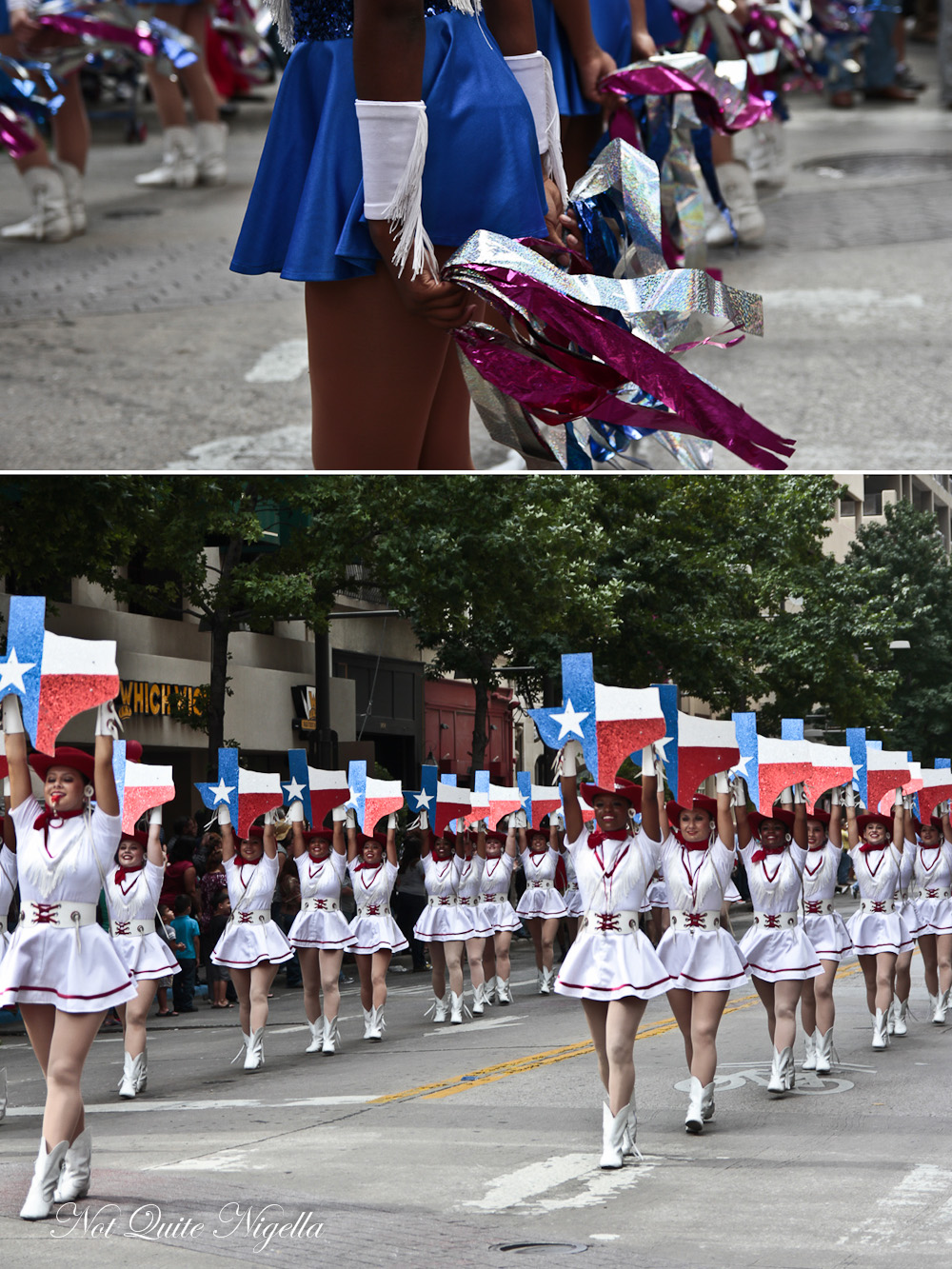 To open the Dallas State Fair or as it is know as the Texas State Fair, there's a one hour long downtown parade. The fair has been going for 127 years. The parade is full of cheerleaders, marching bands and beauty queens with big hair. 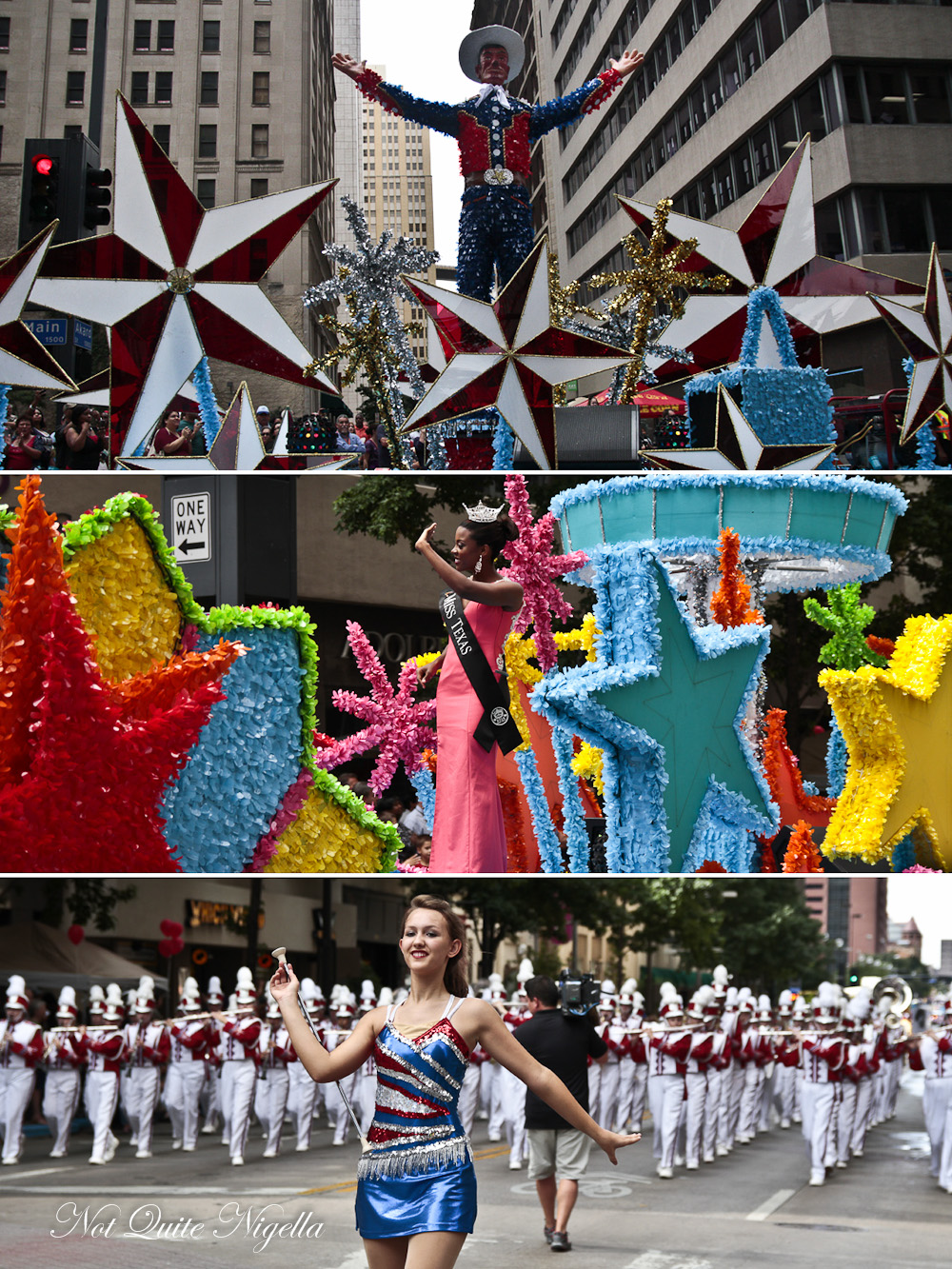 Afterwards, we have bigger fish to fry. And by that I mean deep fry. The Dallas State Fair is the deep frying capital of the world. It's the place where you can buy deep fried butter, deep fried Nutella and deep fried beer. Every year they change the deep fried items and there's a list of the Big Tex choice awards of the best eight. 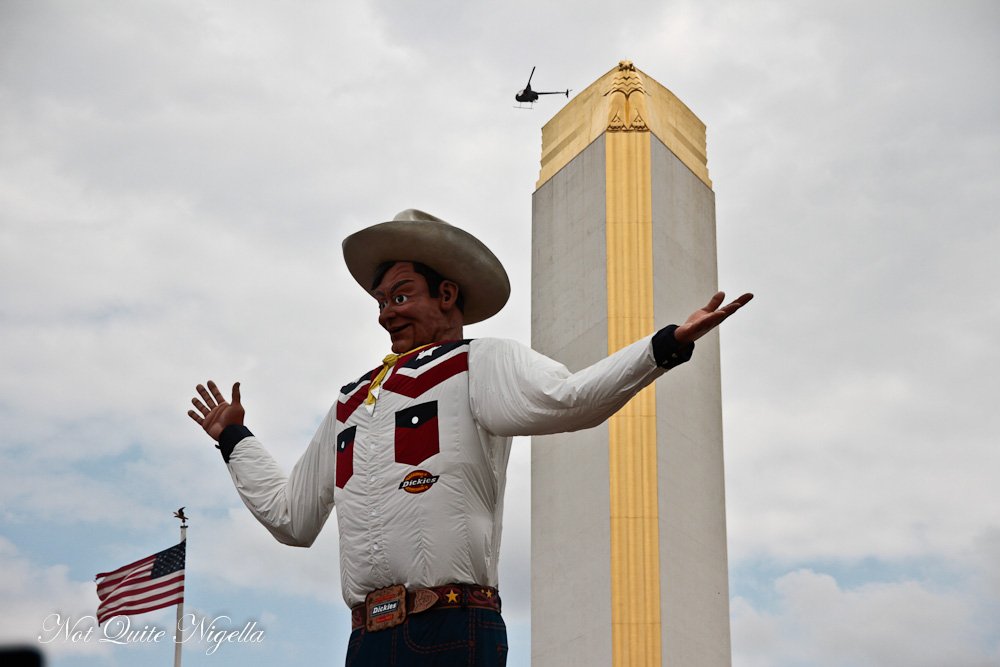 It's similarly laid out to the Easter Show and if you are going just for the food and rides, you can certainly traverse the fair within a day. As we're arriving on opening day which is a Friday the queues are shorter than what we'd expect on weekends and we take a copy of the information book has maps of the top eight deep fried foods and where they are located. You buy coupons for food, drink and rides and one sheet of 20 coupons is $10USD. 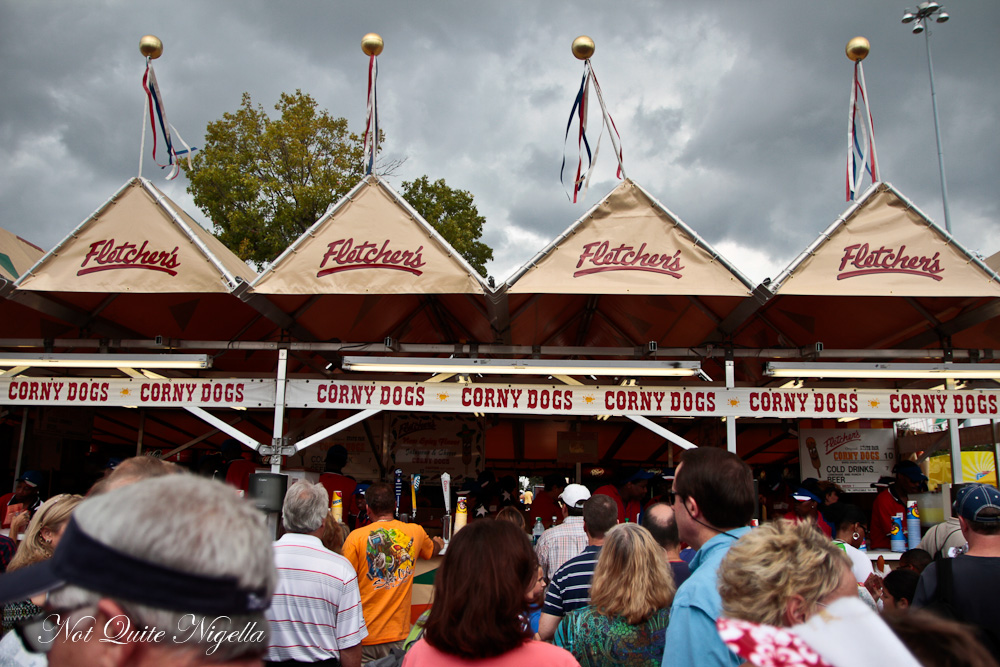 A must-have at the show is a Fletcher's corn dog. This is a popular stand and there is also a stand at the downtown parade. Fletcher's lay claim to having invented the corn dog at the Texas State fair in 1938. The corn dogs are similar to what we call pluto pups. And at this early hour the sauce canisters seem to have run out so we manage to squirt a little mustard on it and take a bite. The corn bread outer is a bit tough and really thick with cornmeal. It's also very heavy so we abandon ours and go in search of some deep fried goodness. 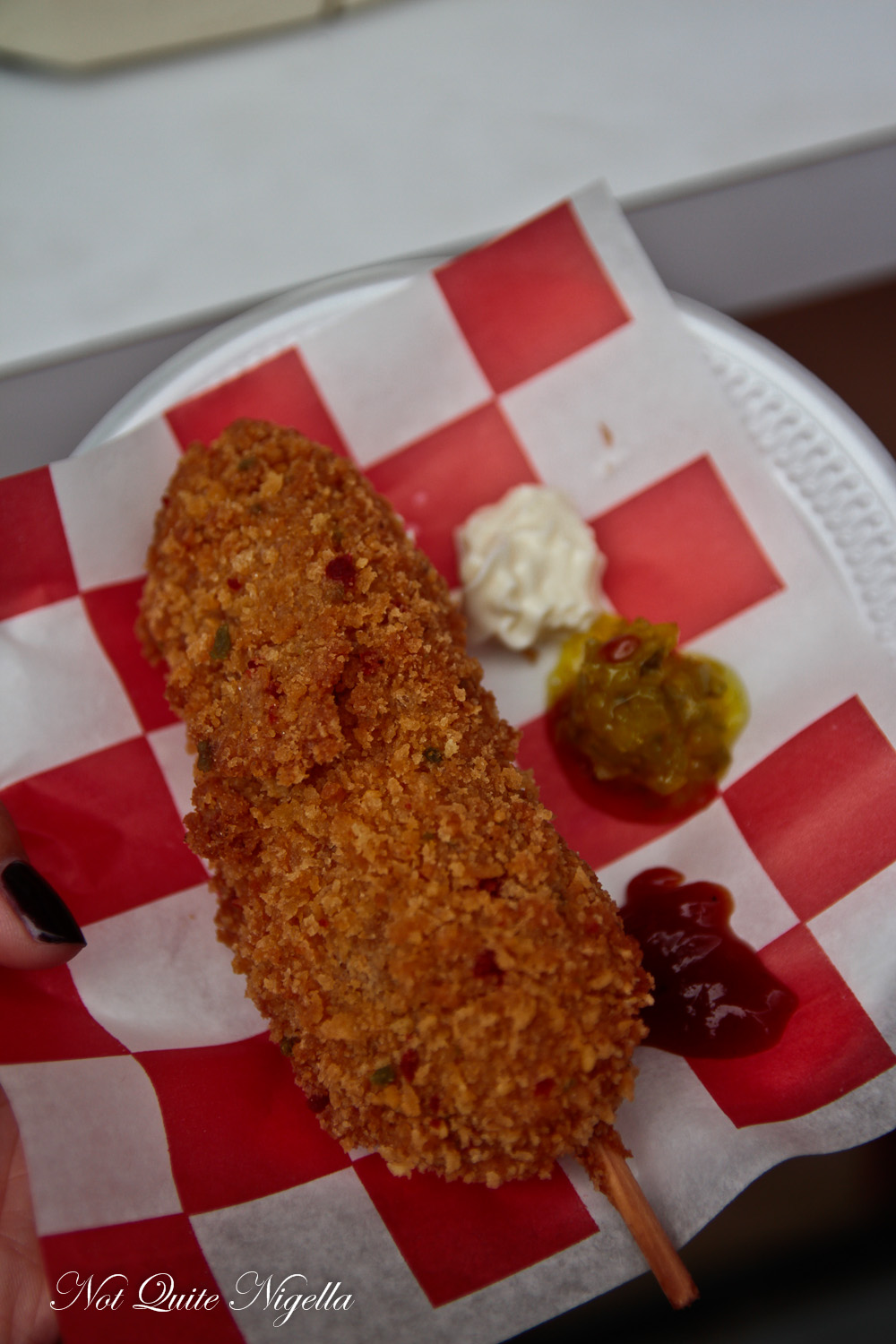 Buffalo chicken in a flapjack 12coupons/$6USD

We don't have to travel far to find it. Belinda, Barbara and I stop at one stand and there are two items on offer. The buffalo chicken is a chicken strip on a stick dipped in flapjack batter rolled in jalapeno breadcrumbs and served with syrup on the side. It's like a lightly spicy crumbed chicken nugget with pancake syrup. 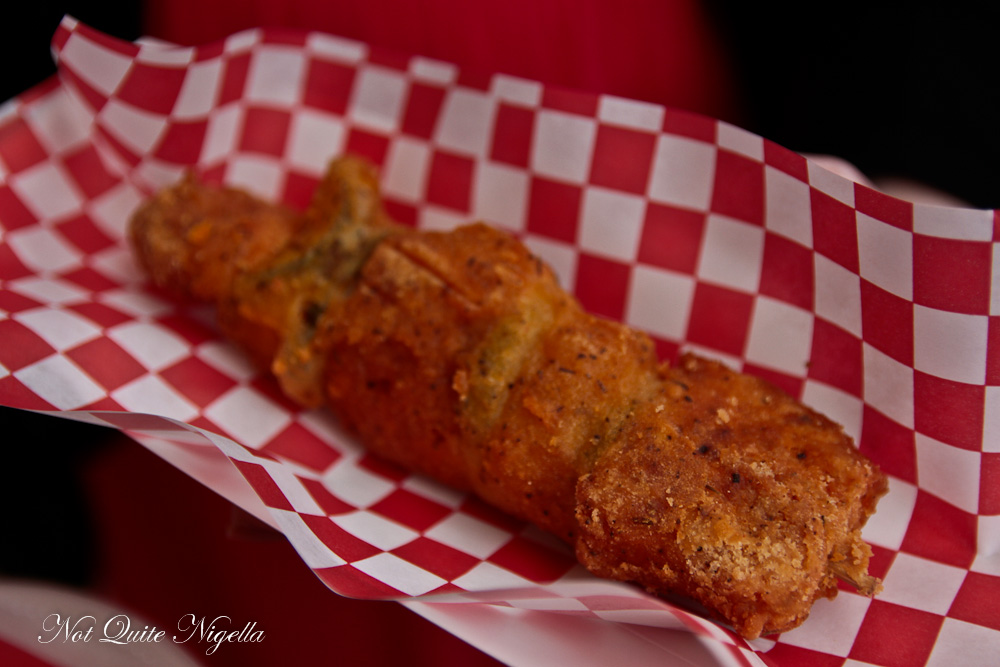 Picnic on a stick 12 coupons/$6USD

The picnic on a stick is made up of spiced chicken, tater tots, pickle, battered and rolled in spicy breadcrumbs. This was threaded onto a skewer, battered and deep fried. The result is like a kebab with different tastes and a spongy, crisp texture although it was hard to discern exactly what it was. 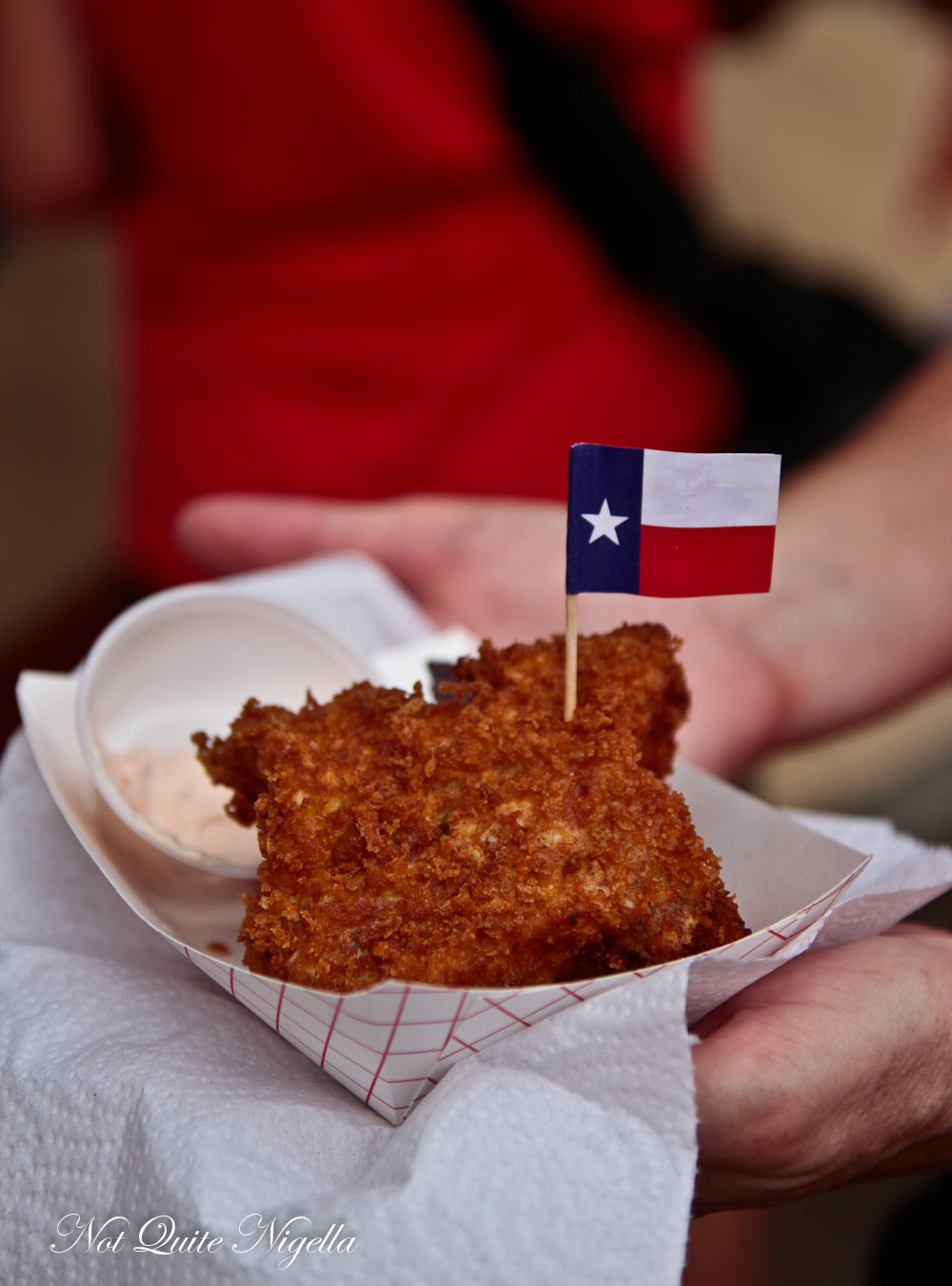 This is one of the award winning items and it is a chicken casserole cut out in the shape of Texas. It is a casserole made with Ro Tel green chilli tomatoes, shredded chicken, tortilla chips, cream of mushroom and cream of chicken soup and onions and is served with red white and blue tortilla chips. It's not bad and it's interesting to see that a casserole can be deep fried but we favoured the next item. 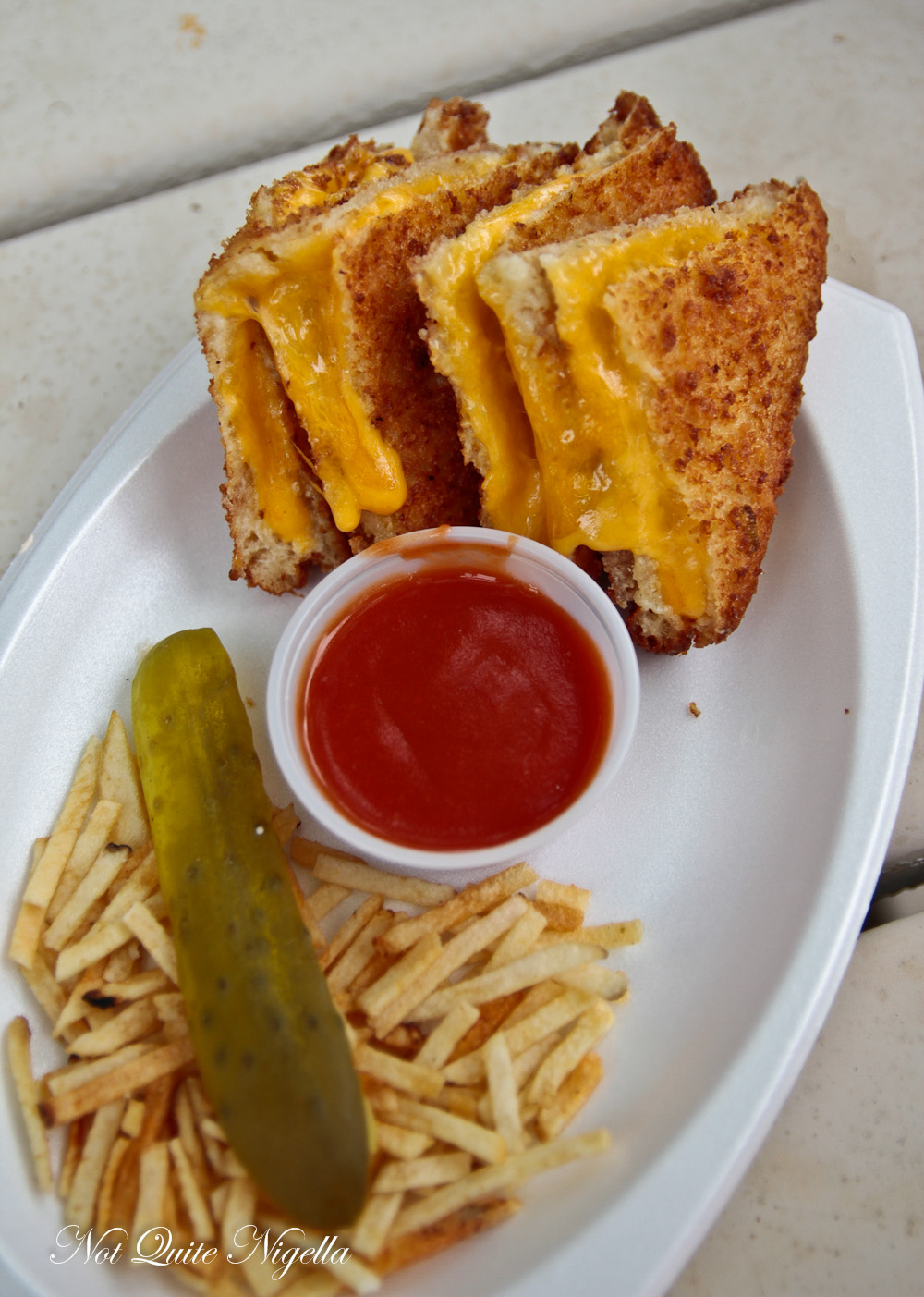 From the same stand, the deep fried grilled cheese ends up being a favourite of Belinda's. It is a cheese sandwich that looks to be dipped in a batter with crumbs on the outside. It is gooey with cheese with a crunchy crumb layer on the outside. 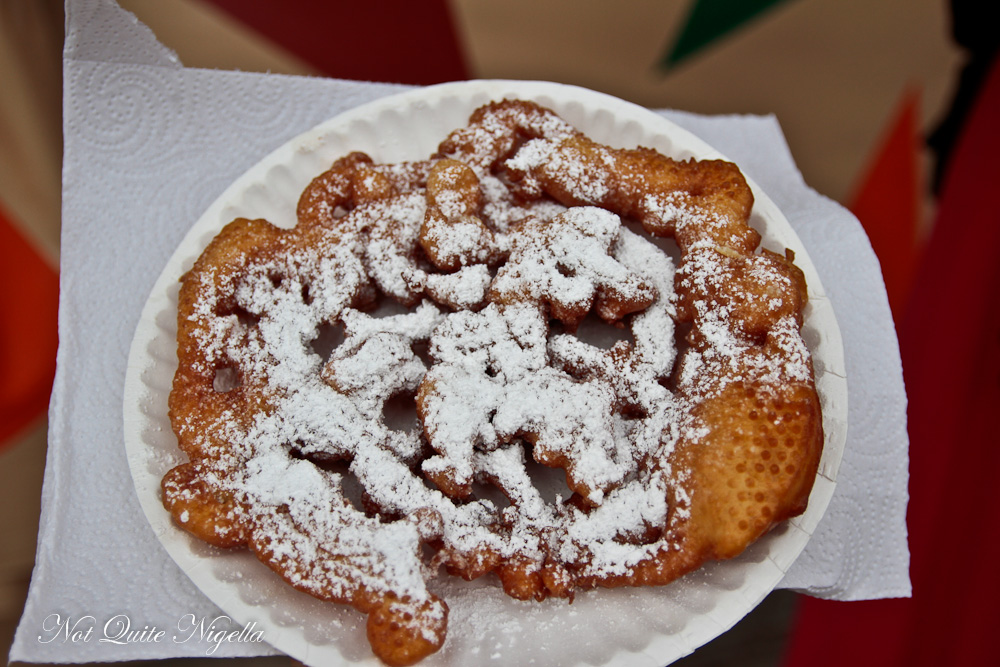 I was eager to try a funnel cake and Barbara explains that the squiggles should be thinner and not as thick. I'll be honest, I find it a bit boring and bland in flavour with just powdered sugar on top. The dough needs a bit of salt and it would have been great with some lemon or some cinnamon in the sugar. 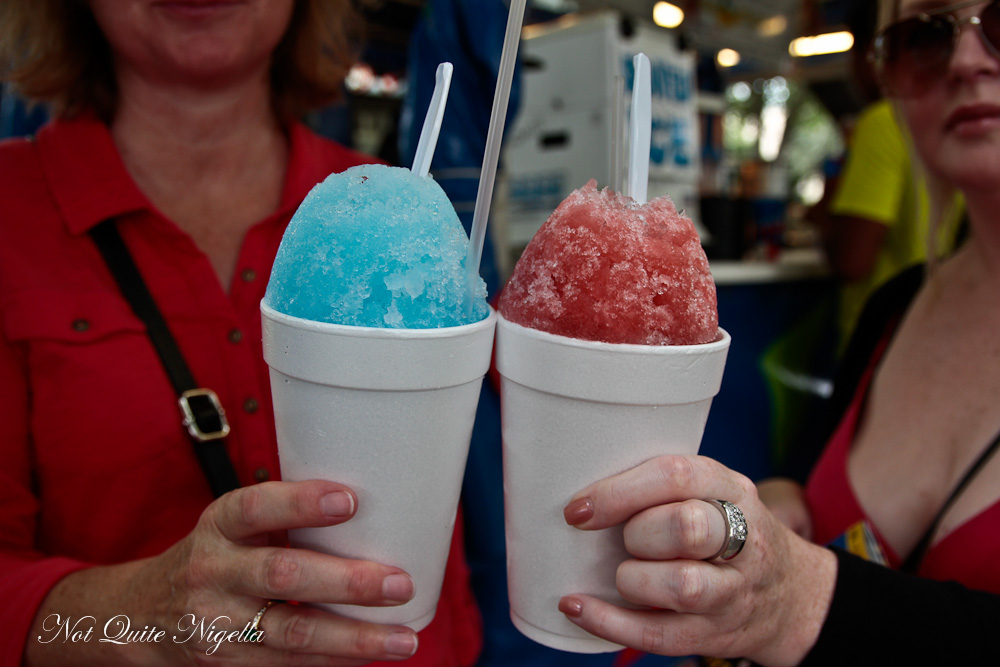 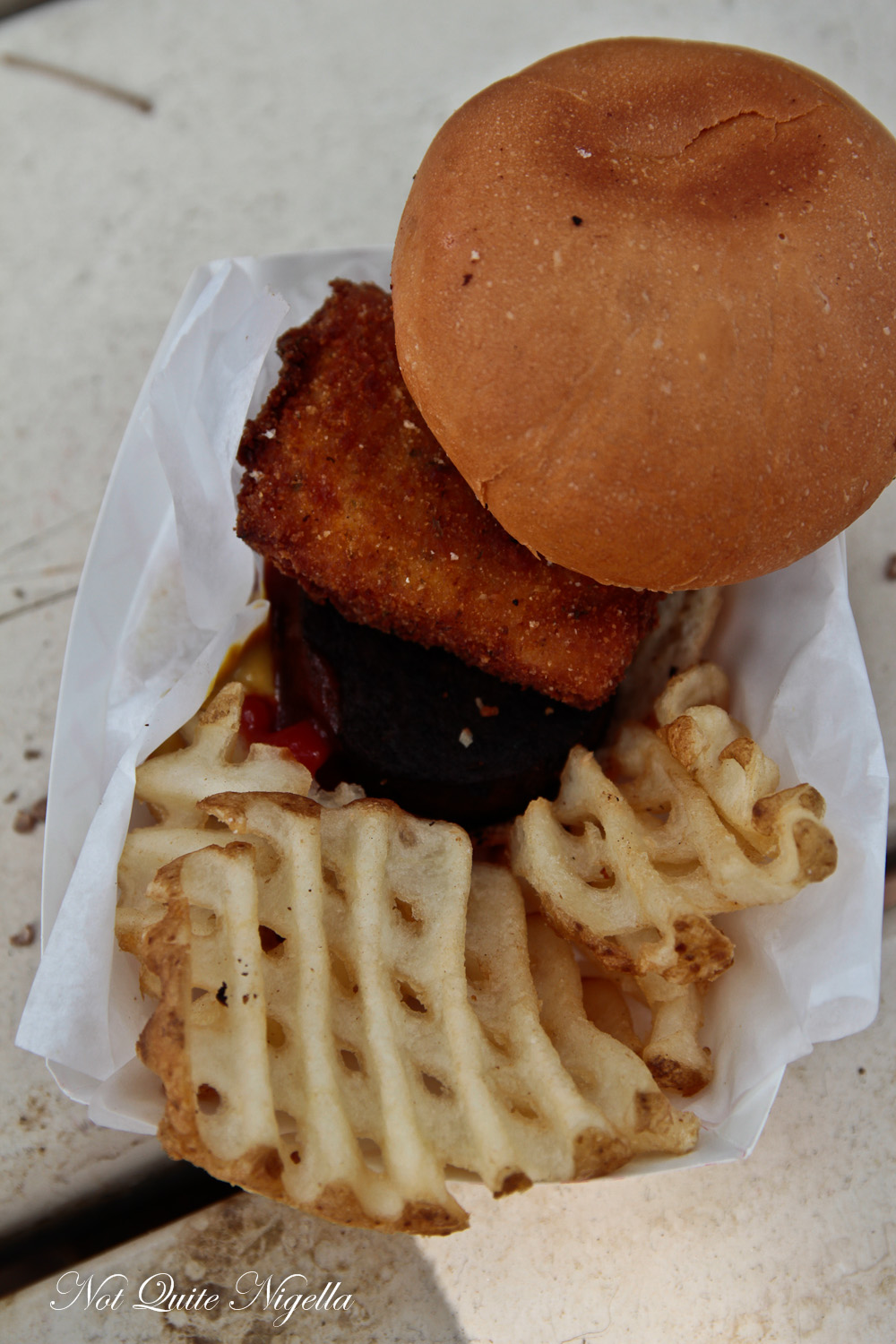 It was an encounter with a particularly unstellar deep fried mac and cheese slider and deep fried Twinkie that caused us to rethink our strategy. The slider was pre cooked and cold when it was handed over to us and was stodgy and inedible. 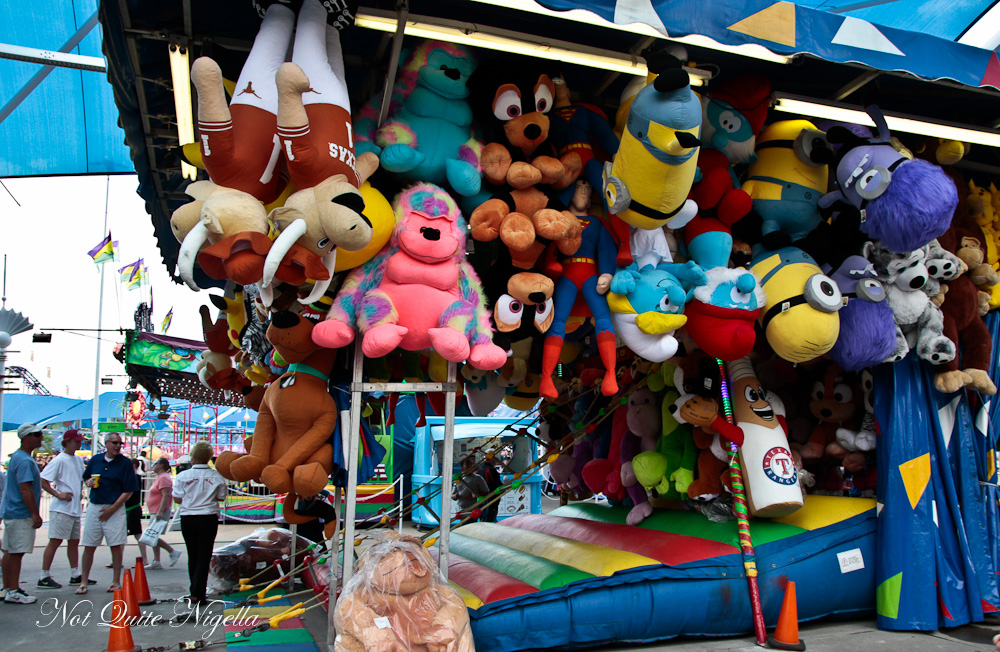 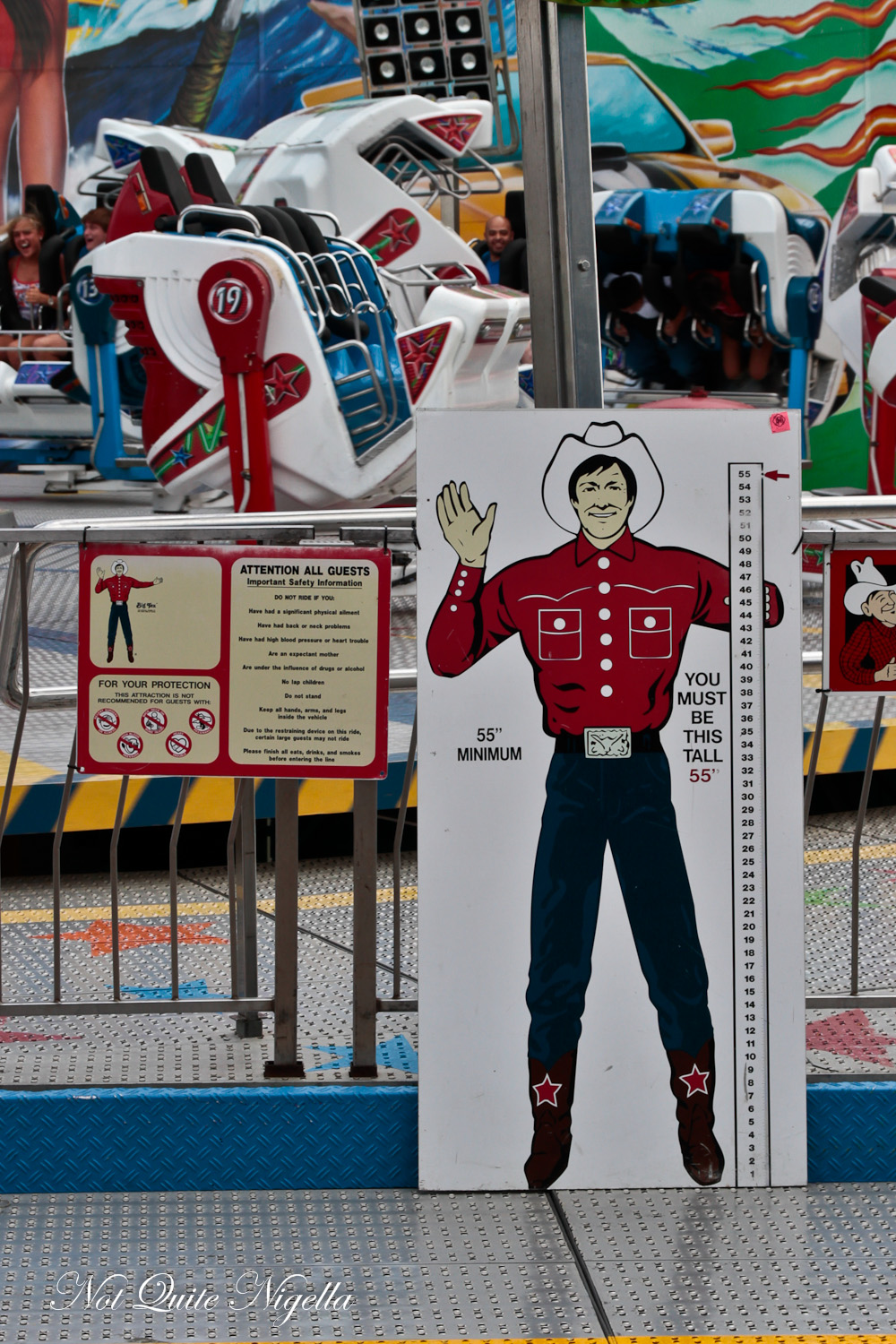 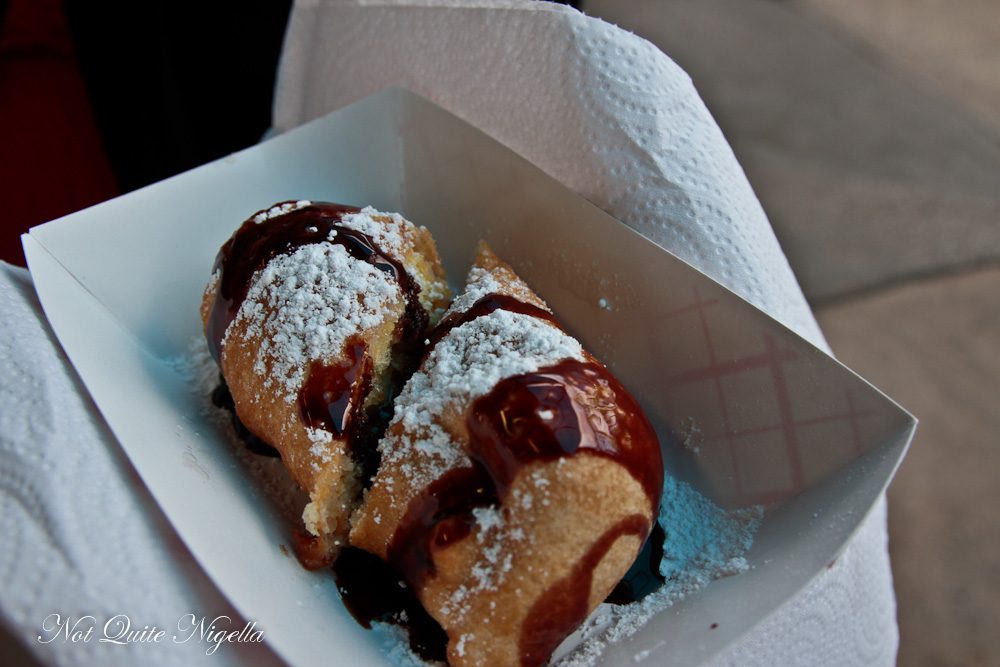 "Would you like butter, chocolate and sugar on top?" the man asks me and I nod yes just because I figure that's the correct answer. The Twinkies had chocolate sauce on them but they really didn't have much flavour nor did the deep frying add much to them. We decided then to stick mainly to the top eight list in the booklet rather than waste calories and coupons on something that just wasn't good. 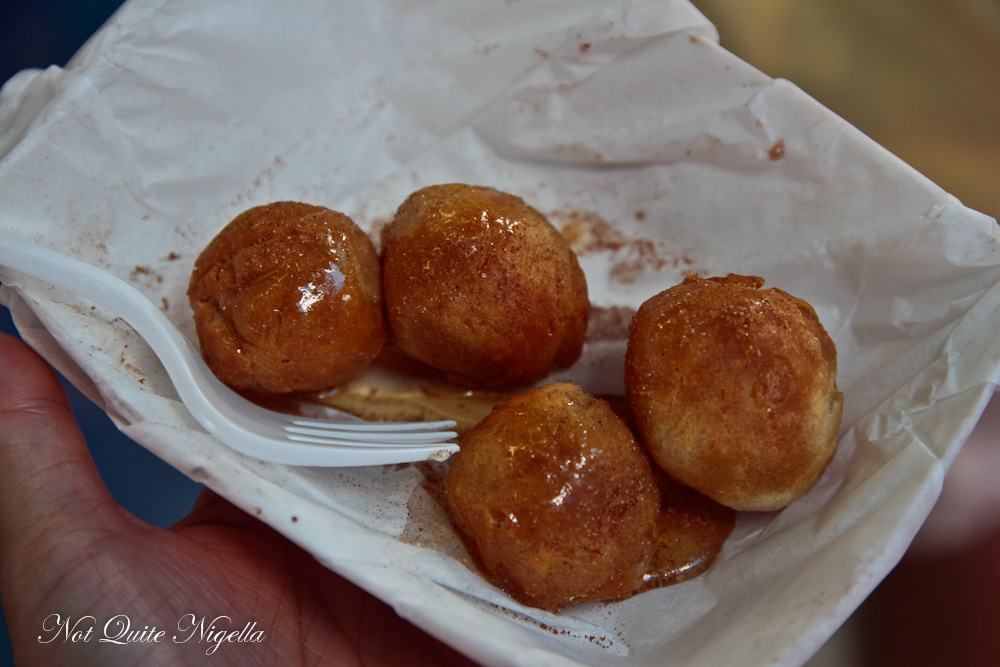 We finally find the deep fried butter and Nutella stand and the deep fried butter comes out quickly. It's a disappointment though as they are small balls with just batter on the outside. I think that the empty centres would have been filled with butter but after deep frying it has just soaked into the dough making them empty and dry. It's served with honey and cinnamon sugar. 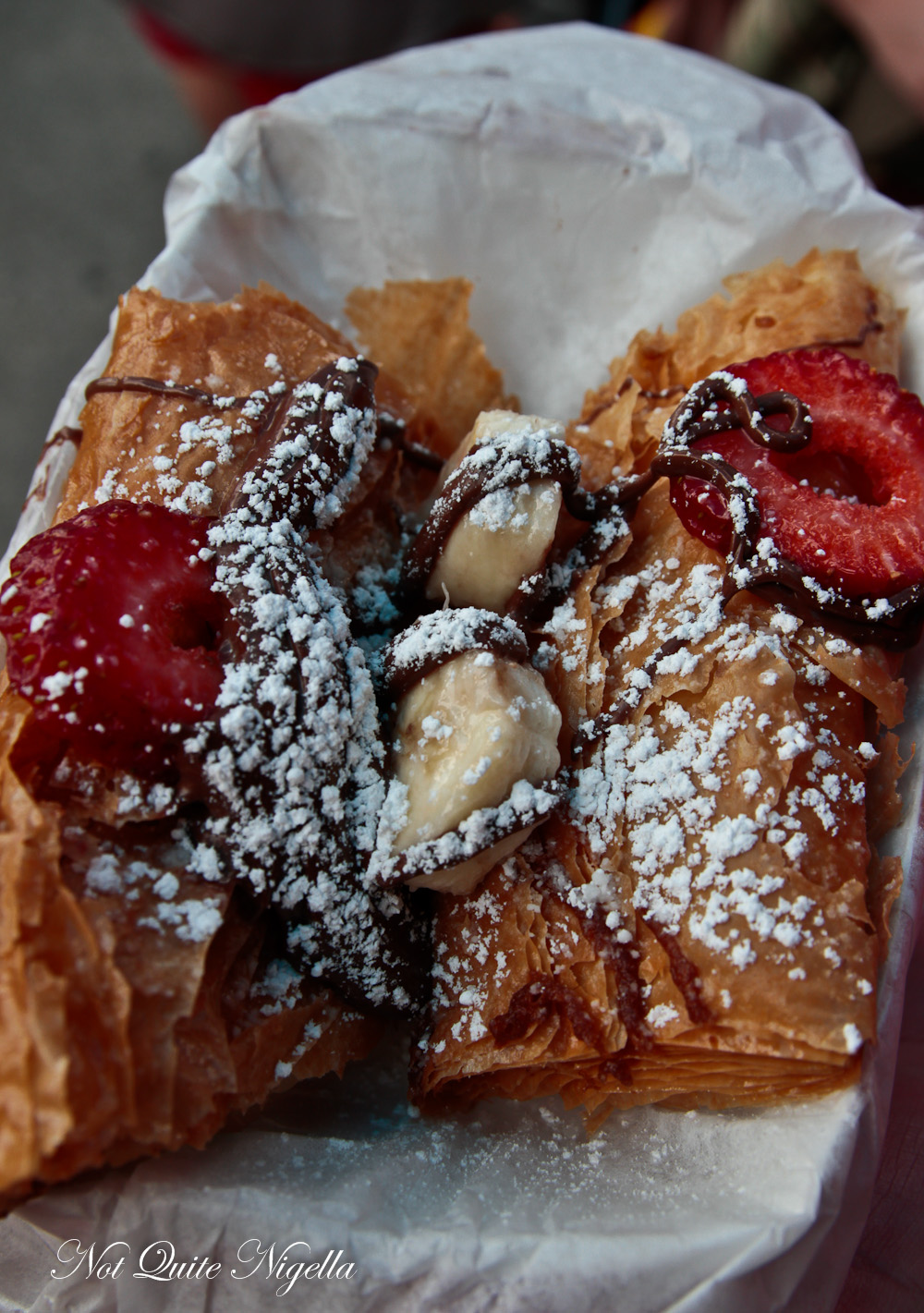 The Nutella is one of this year's top 8 choices and it's made up of Nutella and cream cheese encased in layers of filo dough and deep fried. The wait is long for these and about 10 minute's wait in the heat causes some impatience. When it finally arrives it's actually delicious and is a favourite with me and Barbara. The filo is crunchy golden and the Nutella is melty within with some Nutella drizzled on top. 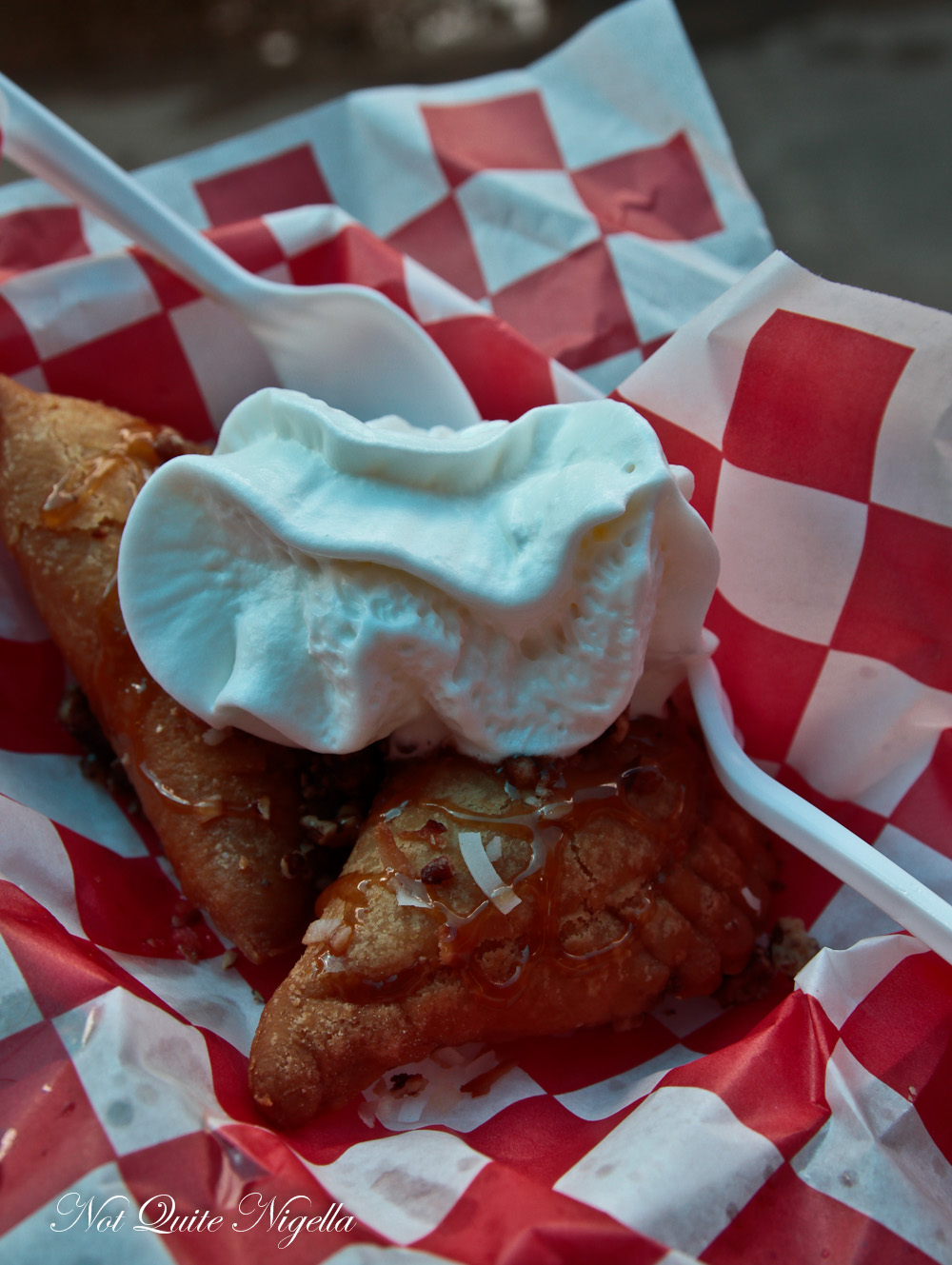 Excited by having a deep fried item that we all like we go onto the next top 8 place selling golden deep fried millionaire pies. I must admit I had no idea what a millionaire pie was - I thought that it was a chocolate caramel slice but that is British. It's actually like a sweet empanada filled with cream cheese and pineapple Texas pecans topped with coconut and more pecans. It's a firm favourite with all three of us because of the combination and the moistness of the filling. 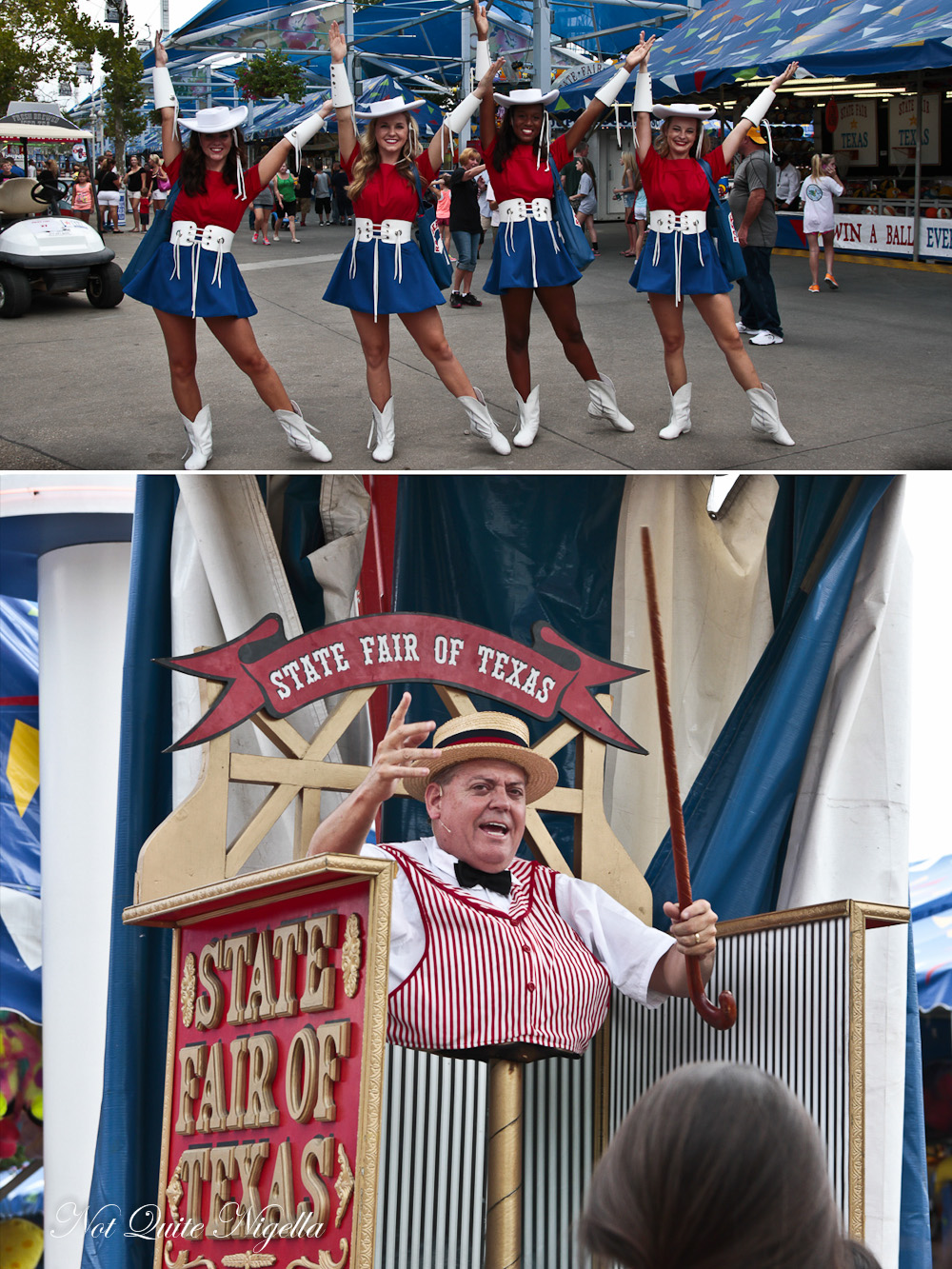 There's no shortage of deep fried items - there are Oreos, drinks and pretty much anything you can eat is deep fried. There's plenty of other non fried "regular" food choices too (although I'd say that the salad or vegetable options are limited). 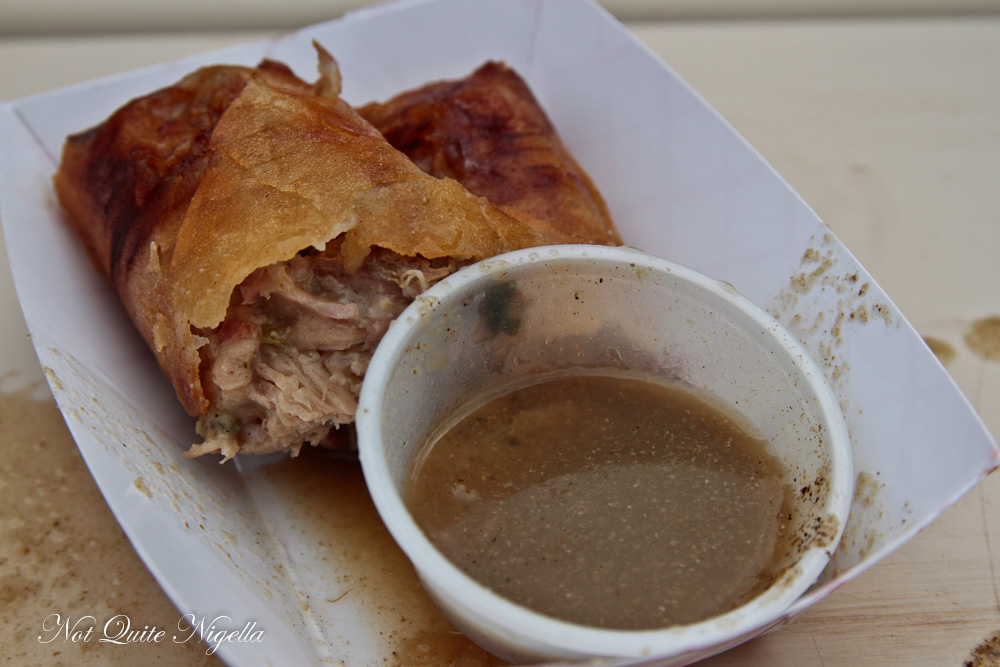 The winner for the Best Taste in the top 8 is the Cuban Roll which is like a spring roll filled with slow-cooked pork shoulder, chopped ham, Swiss cheese, pickles and "secret sauce" spread on a slice of Swiss cheese, rolled in pastry dough and deep fried. It's not bad and the flavour is good although it is really just like a spring roll but with a different filling.

Another finalist is the spinach dip bites which I really enjoy. It is a small serve with just two bites but the spinach artichoke cheese filling is delicious and the balls are rolled in corn tortilla chips and are crunchy golden on the outside. It comes with a salsa to add some spice. 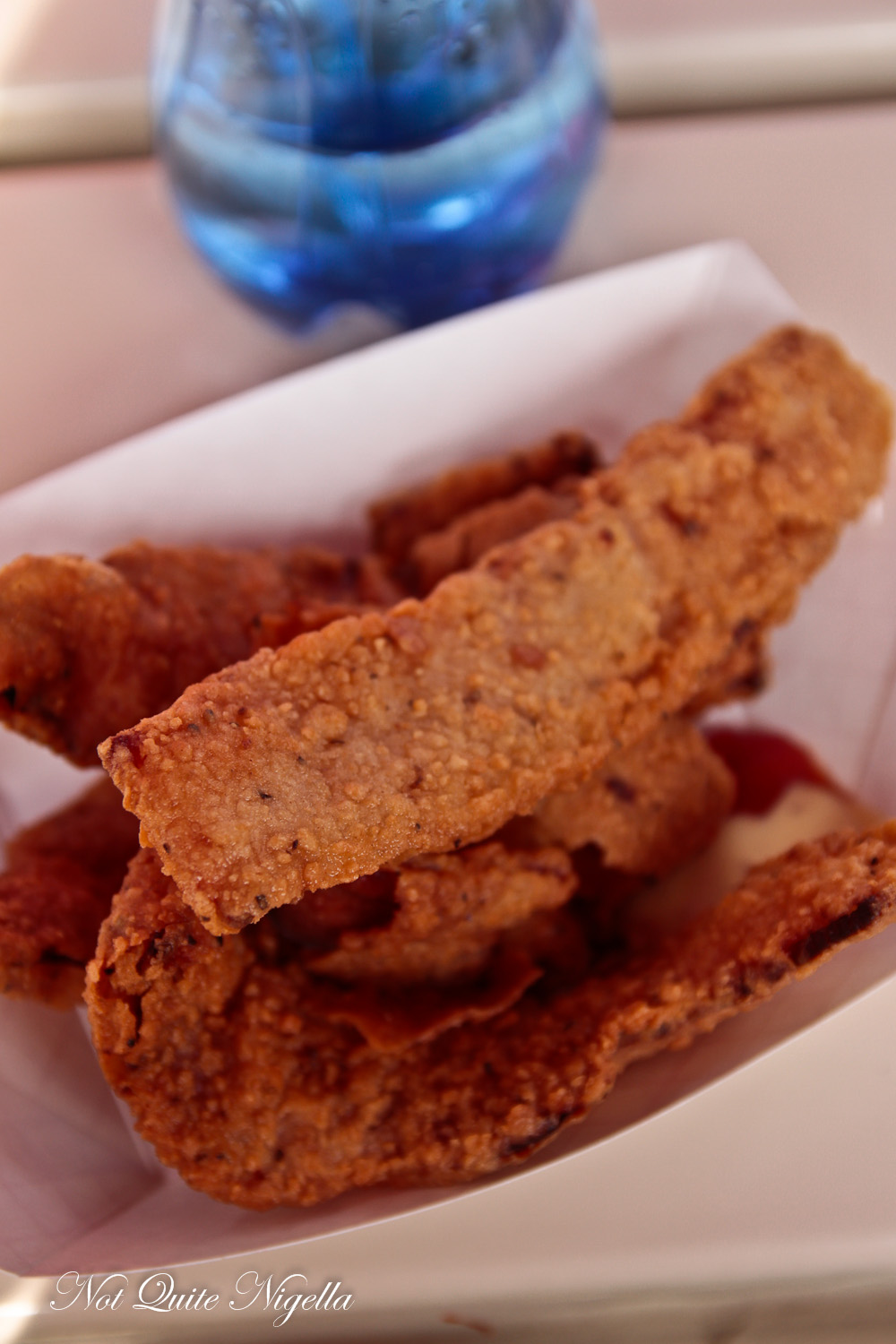 This isn't on the award winning list but we had bought far too many coupons so we thought that we'd try it. The bacon is actually really quite good, the thin rashers coated in a crunchy, thin batter. 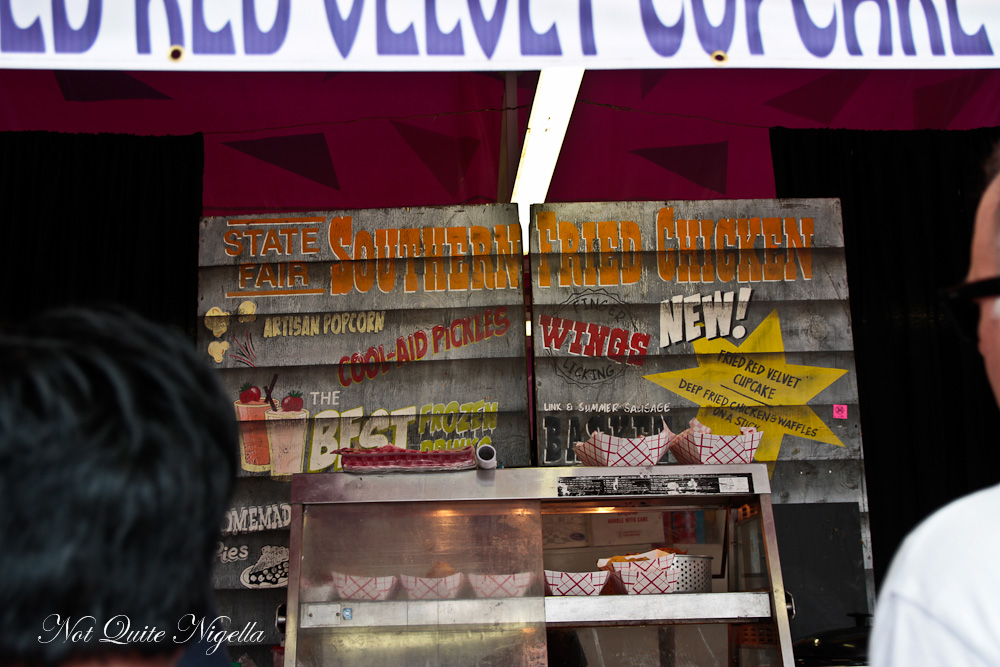 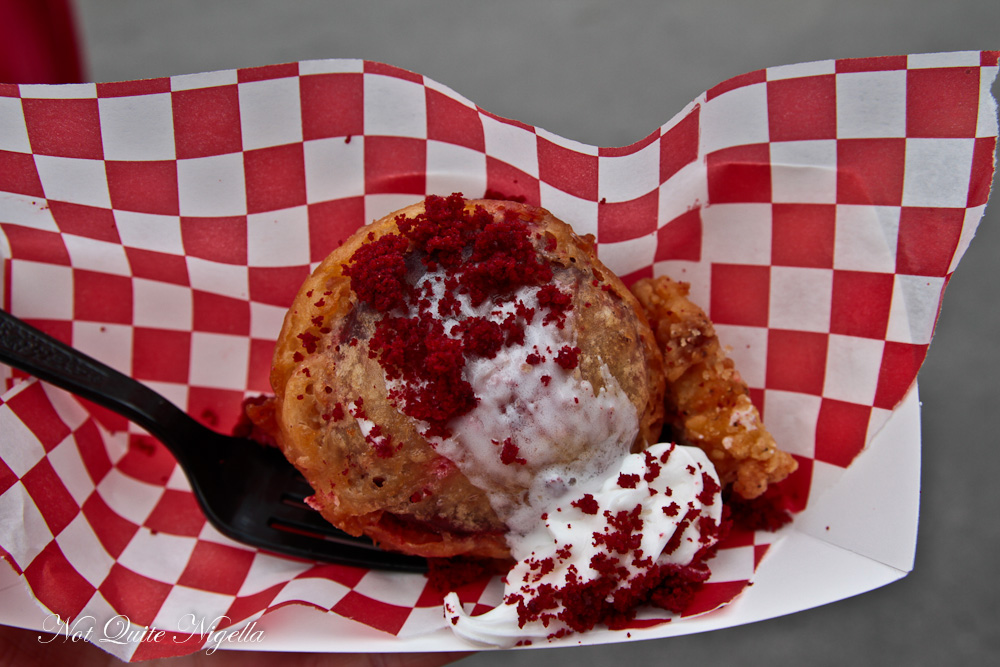 "Well it tastes like...deep fried red velvet cake," Belinda says and it does indeed. The coating is thin and we dig past the red velvet crumbs and faux cream to reveal a moist red velvet cake. I start to wonder how many calories deep frying adds to a red velvet cake and then stop myself. This is clearly no time for calorie counting. And even though previously on this trip I've limited myself to a maximum of three bites for everything, I will admit that here, I limited myself to one to two bites. 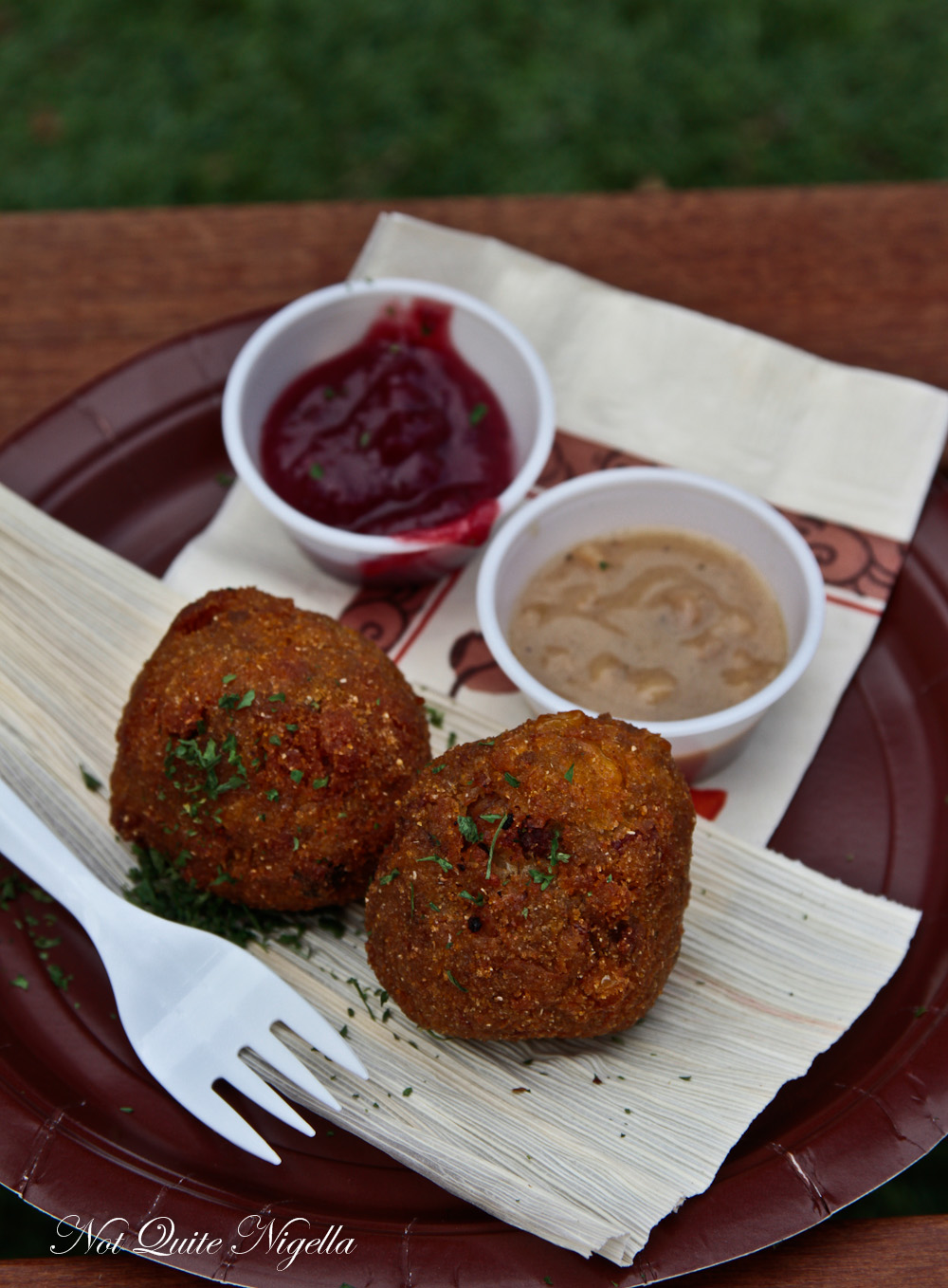 The fried thanksgiving dinner is the winner for most creative in the top 8 list. It is made up of homemade stuffing and diced roasted turkey dipped in southern cream corn, covered in seasoned corn meal and deep fried. It comes with an orange cranberry sauce and giblet gravy. The flavour is like a ball of crumbed and deep fried turkey sage and onion stuffing with bits of corn in it. It's actually quite nice and seems like the appropriate end to a deep fried marathon. 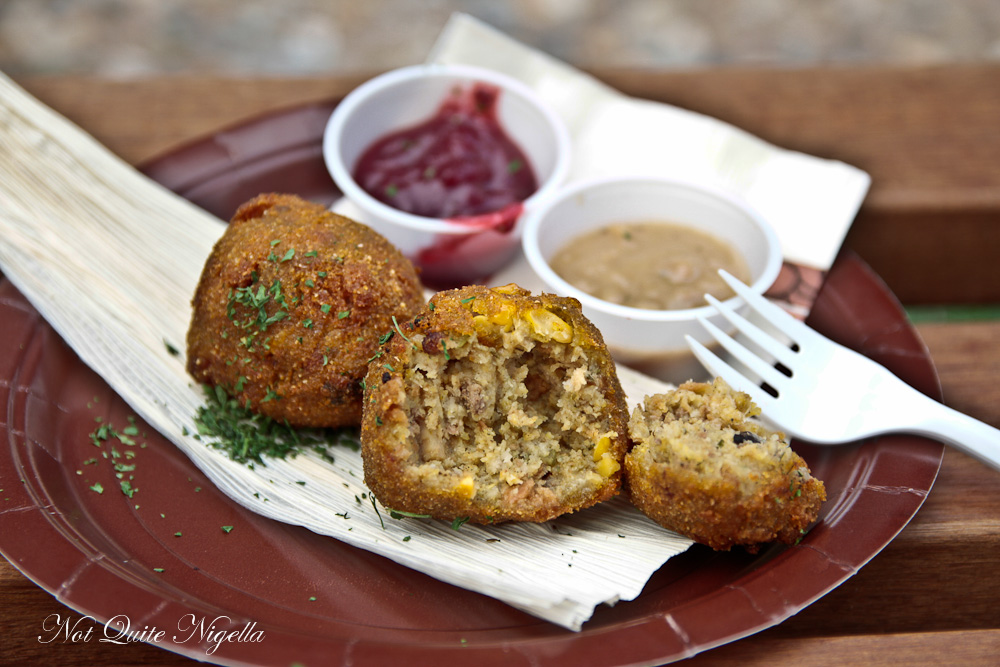 After trying six out of the top eight winners and running out of steam and time, we count our coupons and there are plenty left and we are running out of time so we try one ride. Belinda is not keen on them and the one ride is the only one that interests her. It gives you an view of the whole showgrounds and swivels so that you get a 360° view before landing. 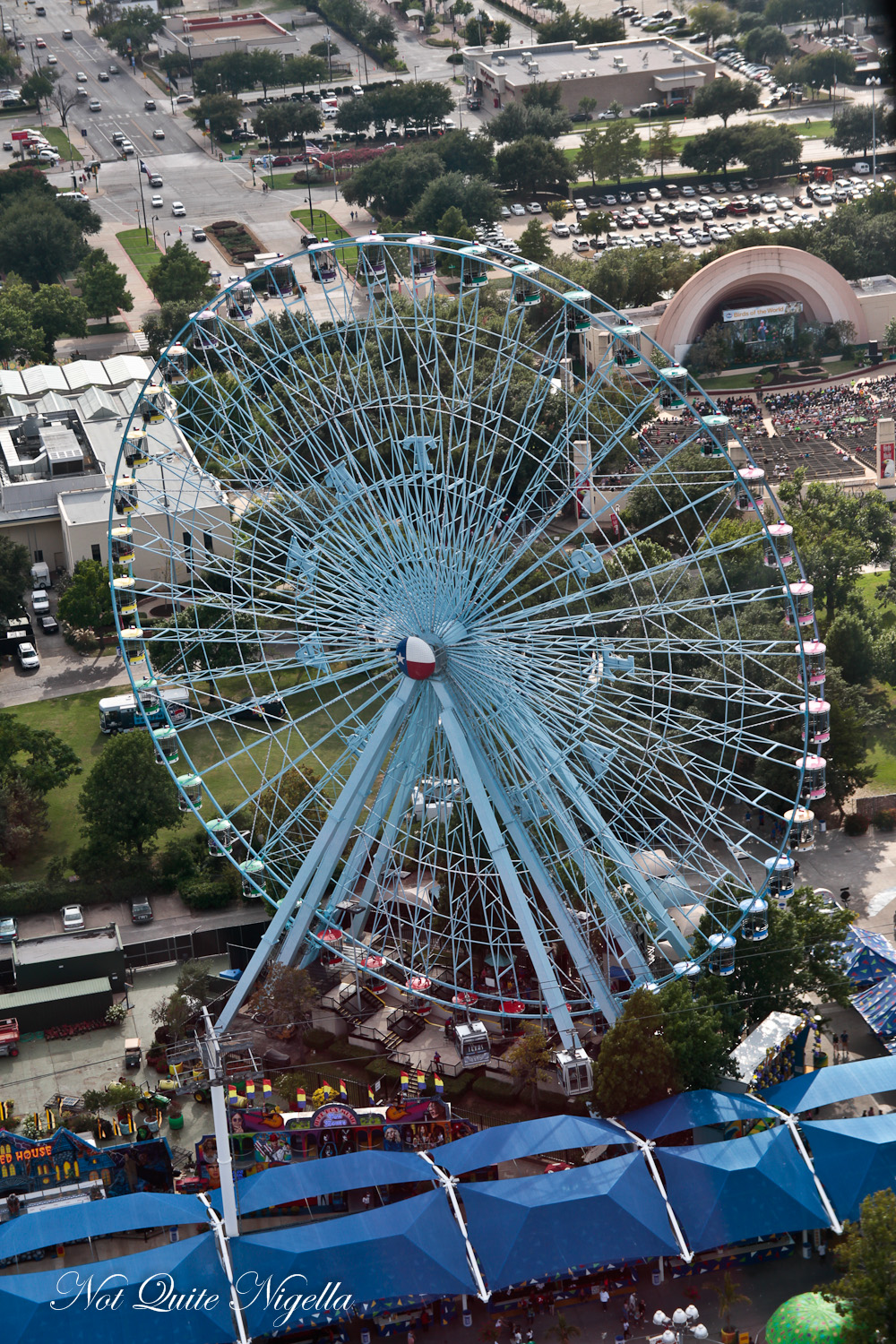 And we didn't eat another deep fried item for weeks afterwards...

So tell me Dear Reader, did any of the deep fried morsels appeal to you? And are any Sydneysiders going to the Easter Show this year (that started yesterday). And the next post in this series is our final road trip post where we end our trip focusing on Dallas's high life! 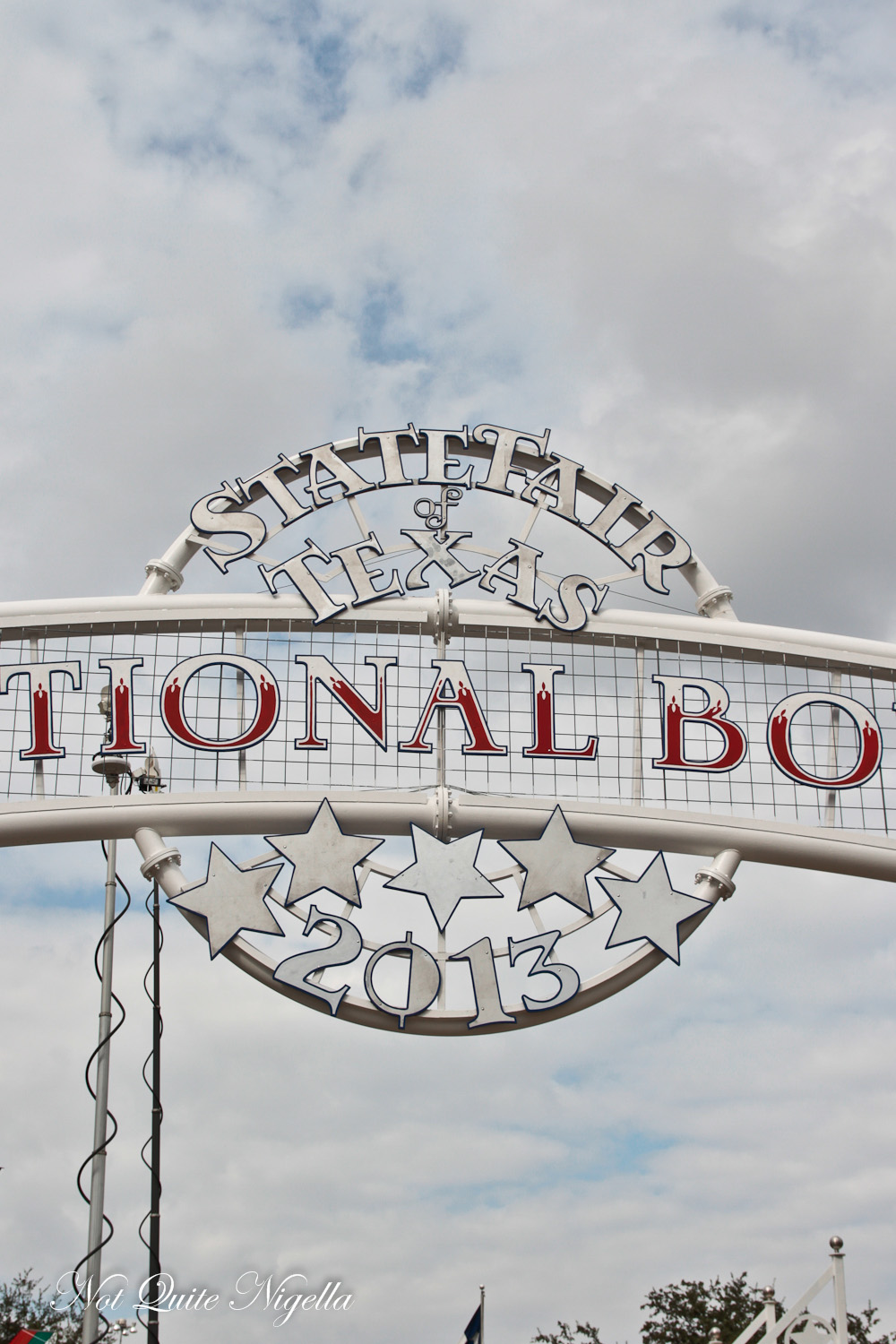 Want to read the other road trip posts? Here they are!

Held on the last weekend of September each year
http://www.bigtex.com